There were some firing operations along the Highway 36 corridor last night. Don’t know exactly where, but Westwood and other communities are still safe.

Biggest change this morning is the fire added about 4,000 acres on the west side of Coyote Peak and Hamilton Mountain yesterday. The fire looks like it has spread about a mile north along the boundary with the Sheep Fire, along Willard Creek Road. I don’t know how much of this new spread is from a firing operation, and will update this post as better intel comes in. 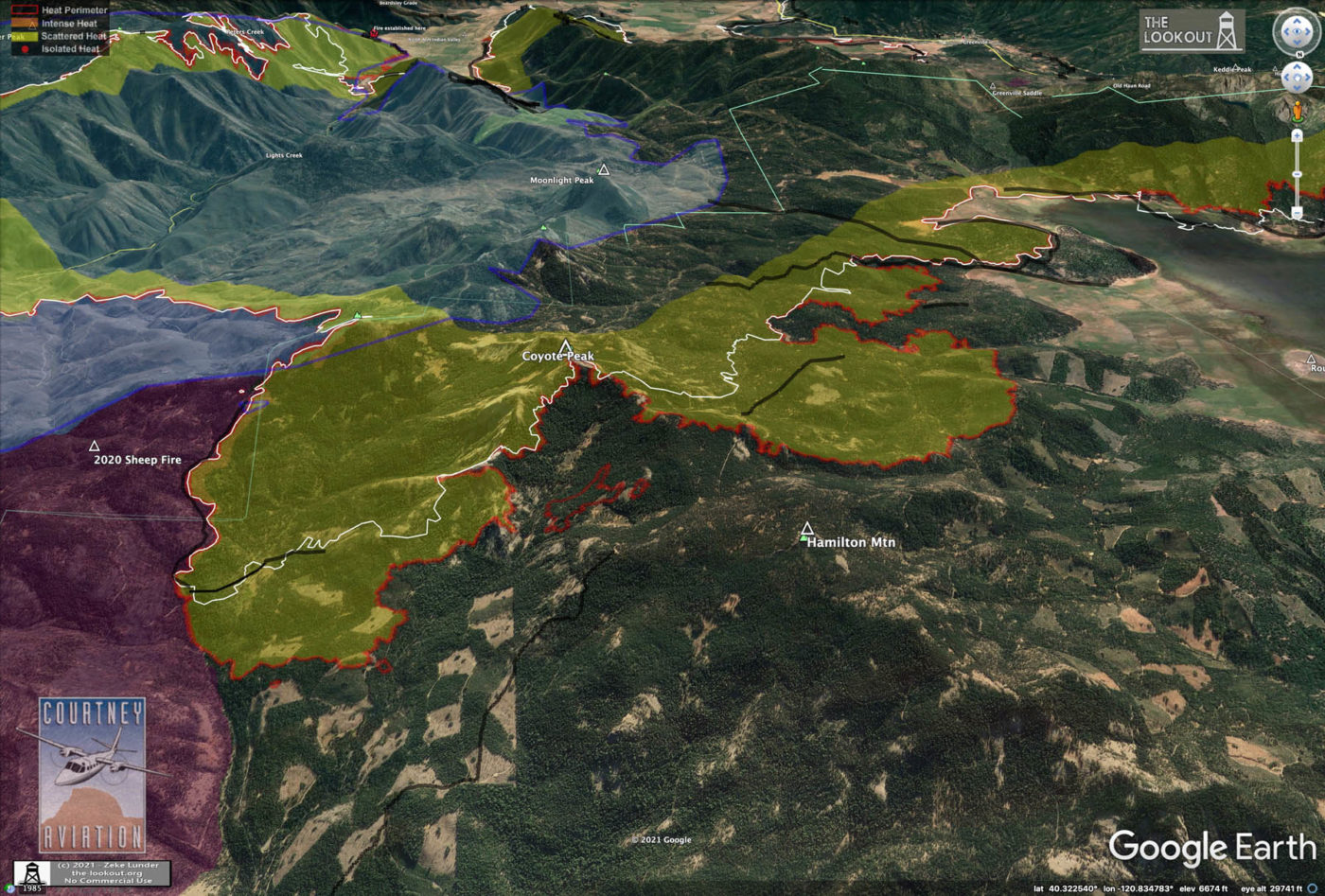 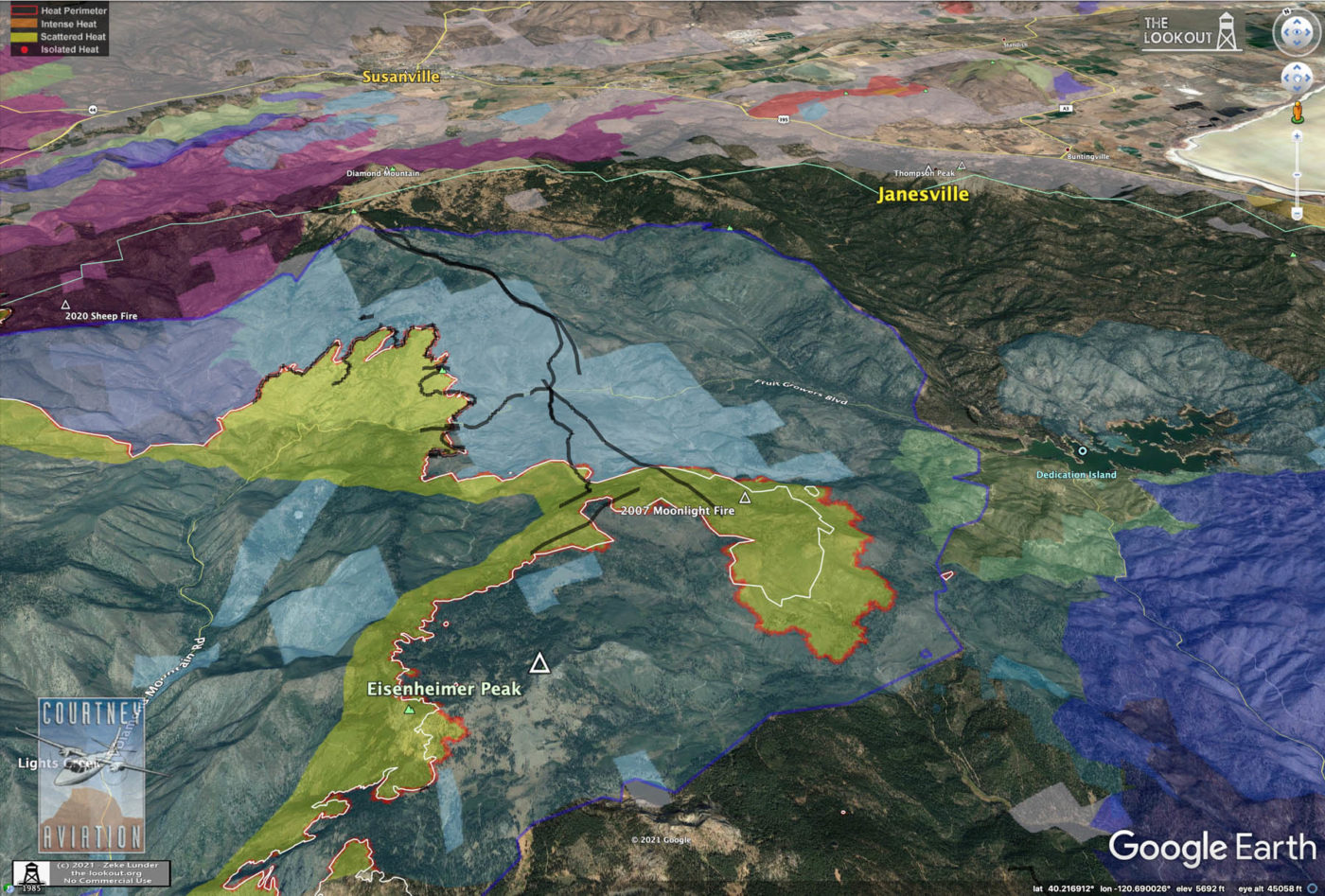 Elsewhere, the fire is established at the mouth of Peters Creek, on the North Arm Indian Valley. I have been expecting this drainage to blow out once the fire got to the mouth of the canyon, and there is still a lot of potential for this to happen. There is dozer line around the ranch at the bottom of the hill, but fire is well-established on the slope to the north of the ranch, so it seems likely it will make the run. Firefighters were successful in keeping the 2007 Moonlight Fire out of Peters Creek, so if this canyon goes, there will be a lot more fuel to burn than we have seen in the canyons which have burned to the north like Freds Creek. It is likely a big run out of Peters Creek could burn all the way to the 2019 Walker Fire (dark blue in background). 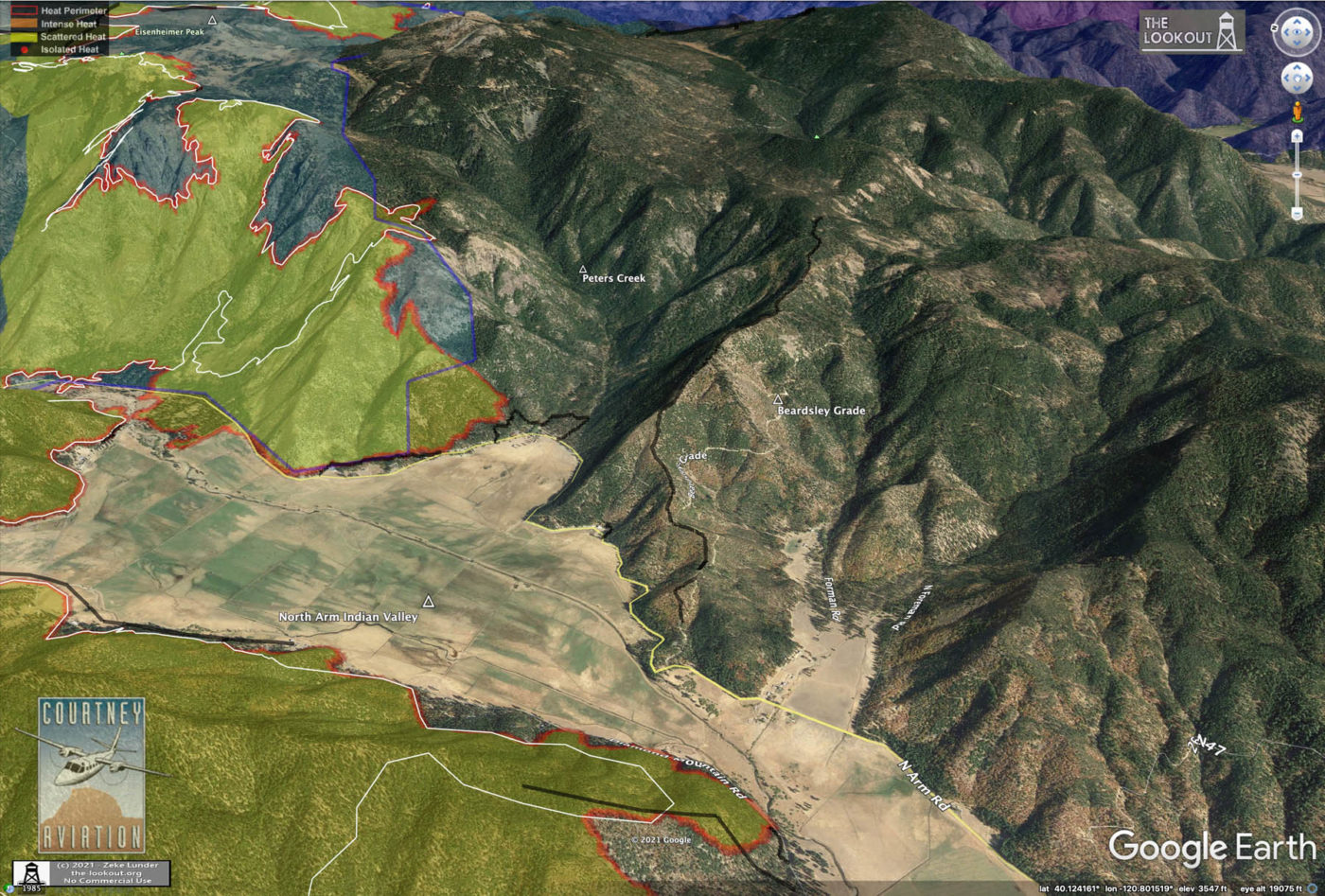 Continued backing and flanking fire on the southern tip of Keddie Ridge. Black lines are dozer lines, and you can see how well they are working out (or not) under current conditions based upon everywhere they are inside of the burn. 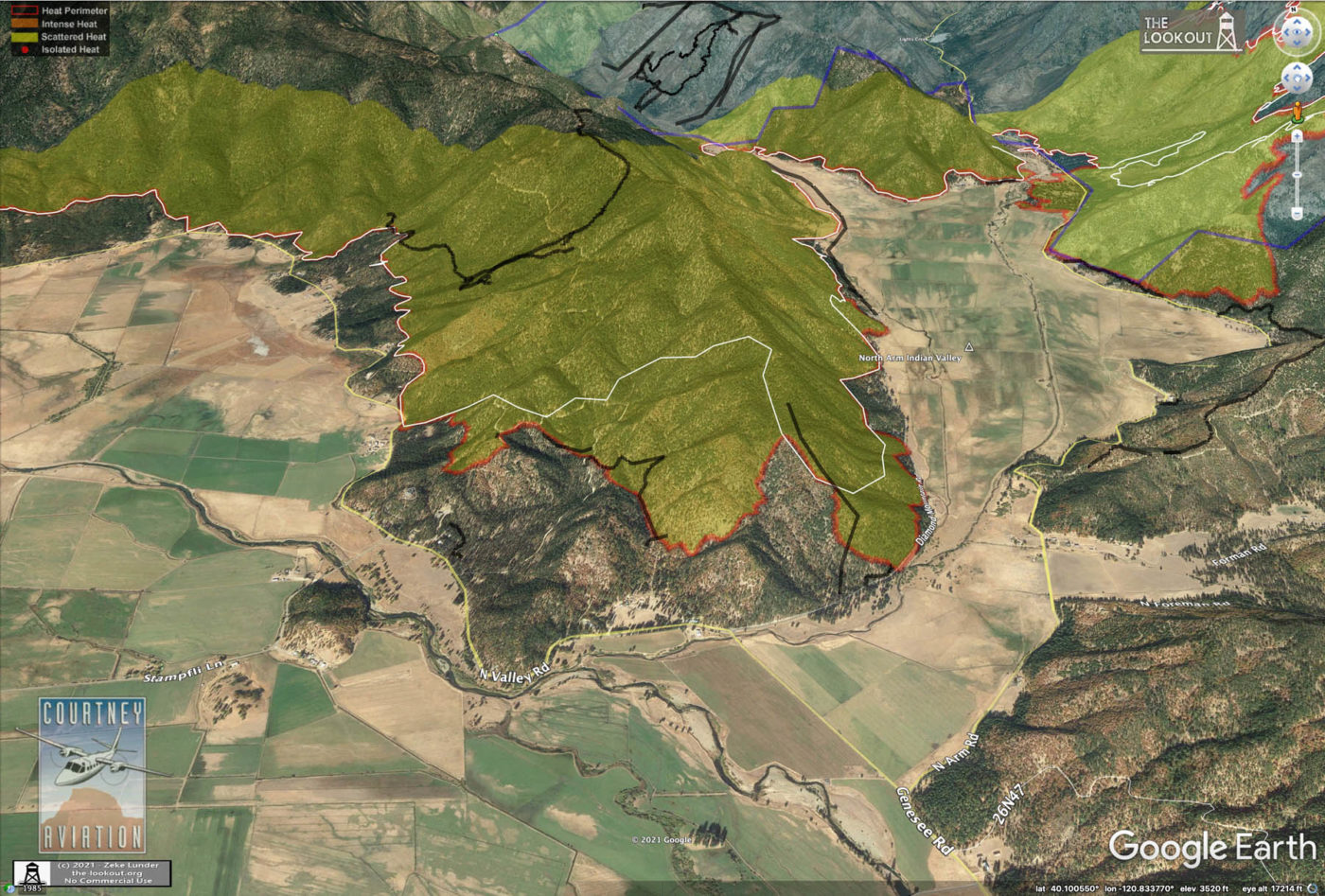 Junction of A-13 and Highway 36 on mid-right, looking north. No fire was across Highway 36 at time of imaging, 6:30 am, 8/14/2021. Bailey Creek Golf Course on lower right. I believe the livestreamed video of roadside firing operations from Matthew Henderson was shot on the Chester Dump Road, just north of Highway 36, here (firing starts at about 45:00). 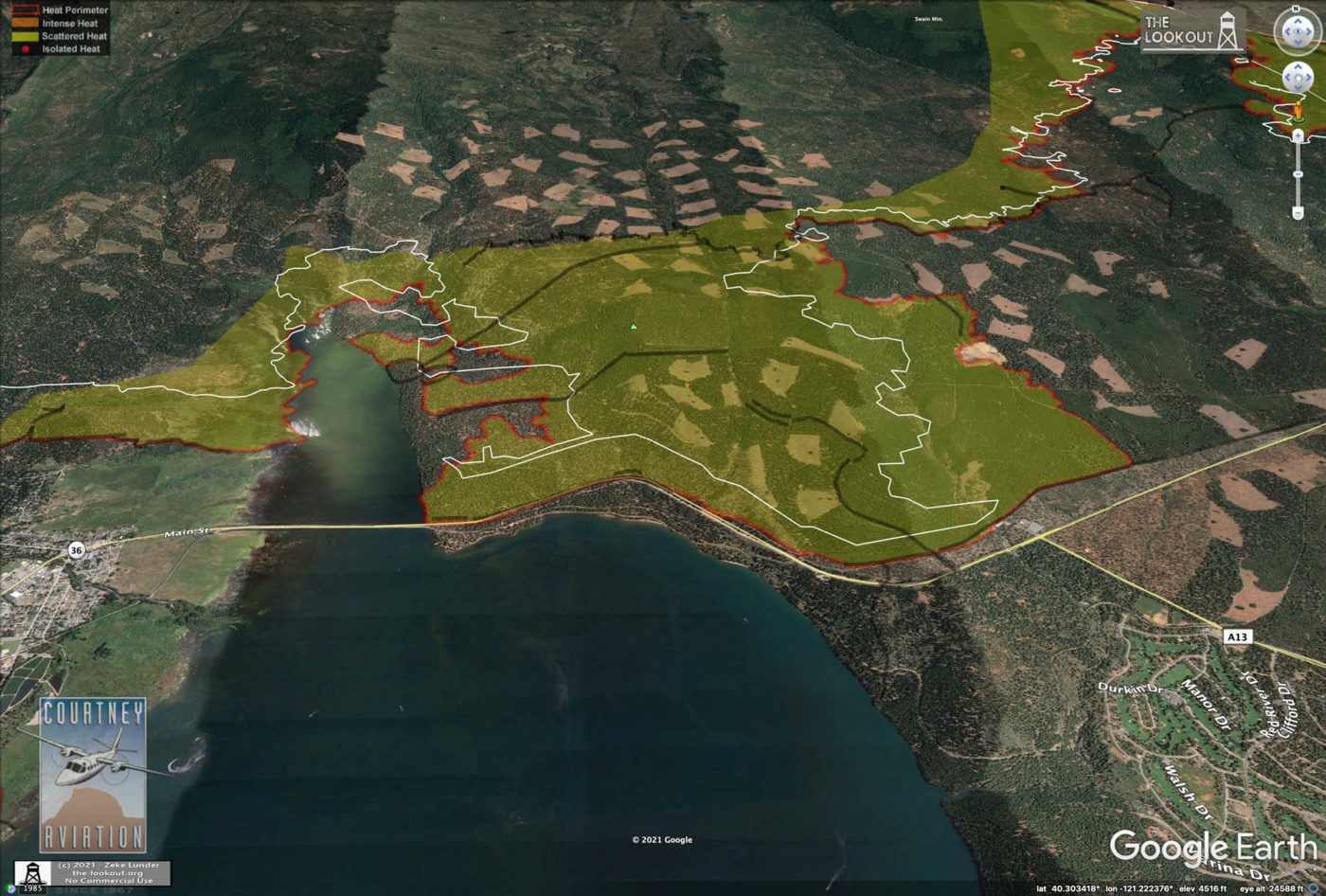 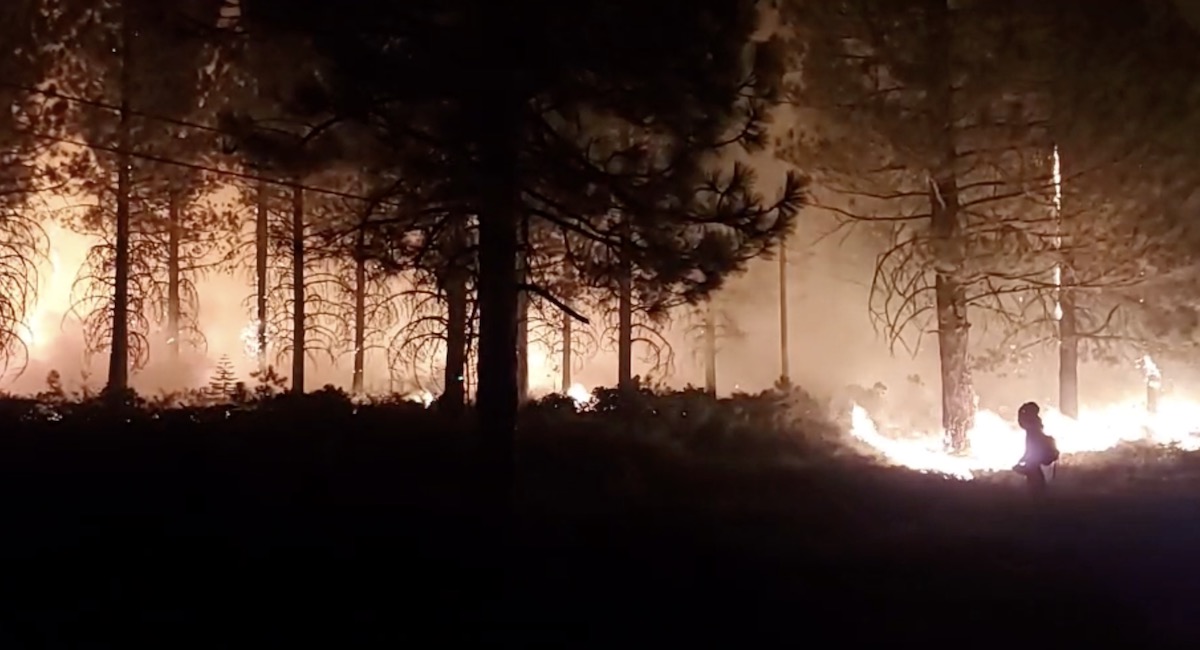 Looking north over Westwood. The fire didn’t spread much in previous 24 hours. Some minor movement on the east side of the slopover where fire crossed A-21 near Duck Lake. 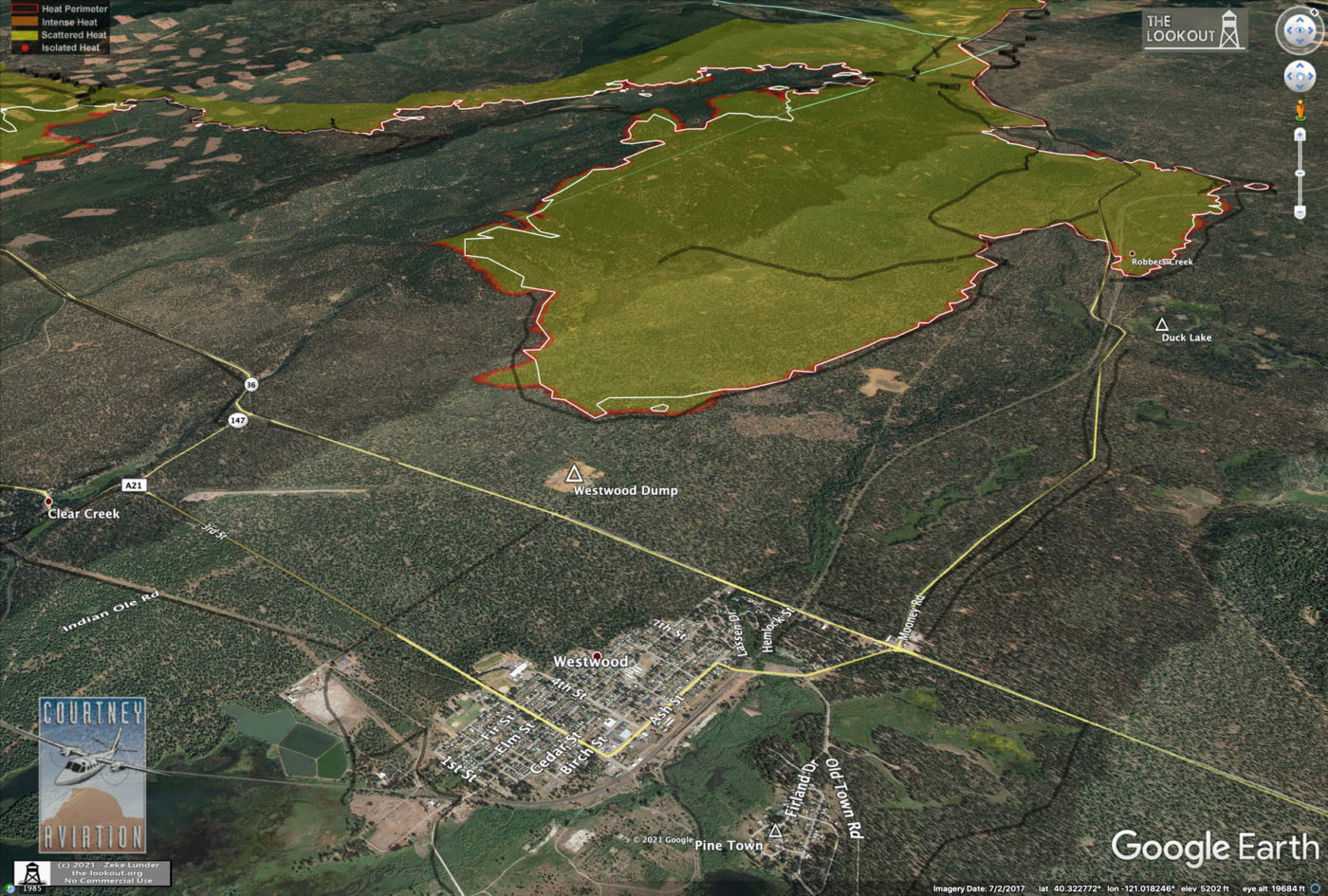 Continued backing fire on Keddie Ridge, south of Westwood. A local source got up the fire and reported it was skunking around and not burning the large trees in Deerheart Creek. There is a lot of pressure for firefighters to ‘tie things in’. Most operations people don’t want fire to just be doing it’s thing, uncontained, even if is is doing good work. I am hoping any firing that gets done to tie in the dozer line running from top of Dyer down toward Mountain Meadows Reservoir gets lit in a way that doesn’t send too much hot fire into the areas where fire is backing slowly and has moved less than 1,000 feet in 5 days. This area may be some of the only old-growth for miles around after this fire, and it’d be a shame if we add any more high-severity fire to the mix here as we attempt to secure the edge of the west edge of the fire here. The lakes on Keddie Ridge are enormously important to the local people, native and non-native alike. The fire effects we get out of the backing fire on Keddie Ridge may turn out to be one of the brightest/most hopeful stories to come out of this disaster. As my Latvian god-mother taught me, I am ‘holding my thumbs’. 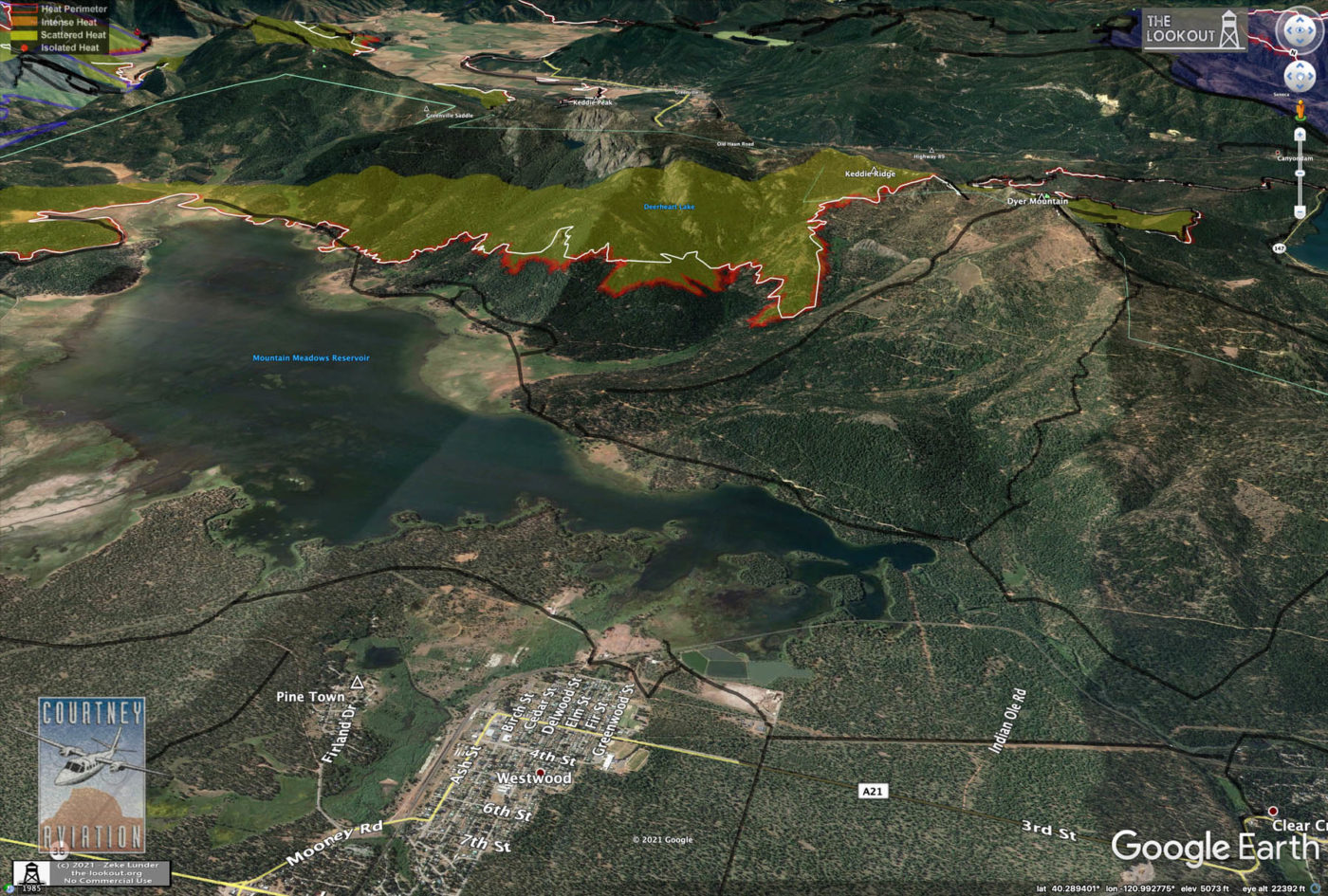 No new fire movement on the south side of Keddie Ridge below Dyer Mountain. 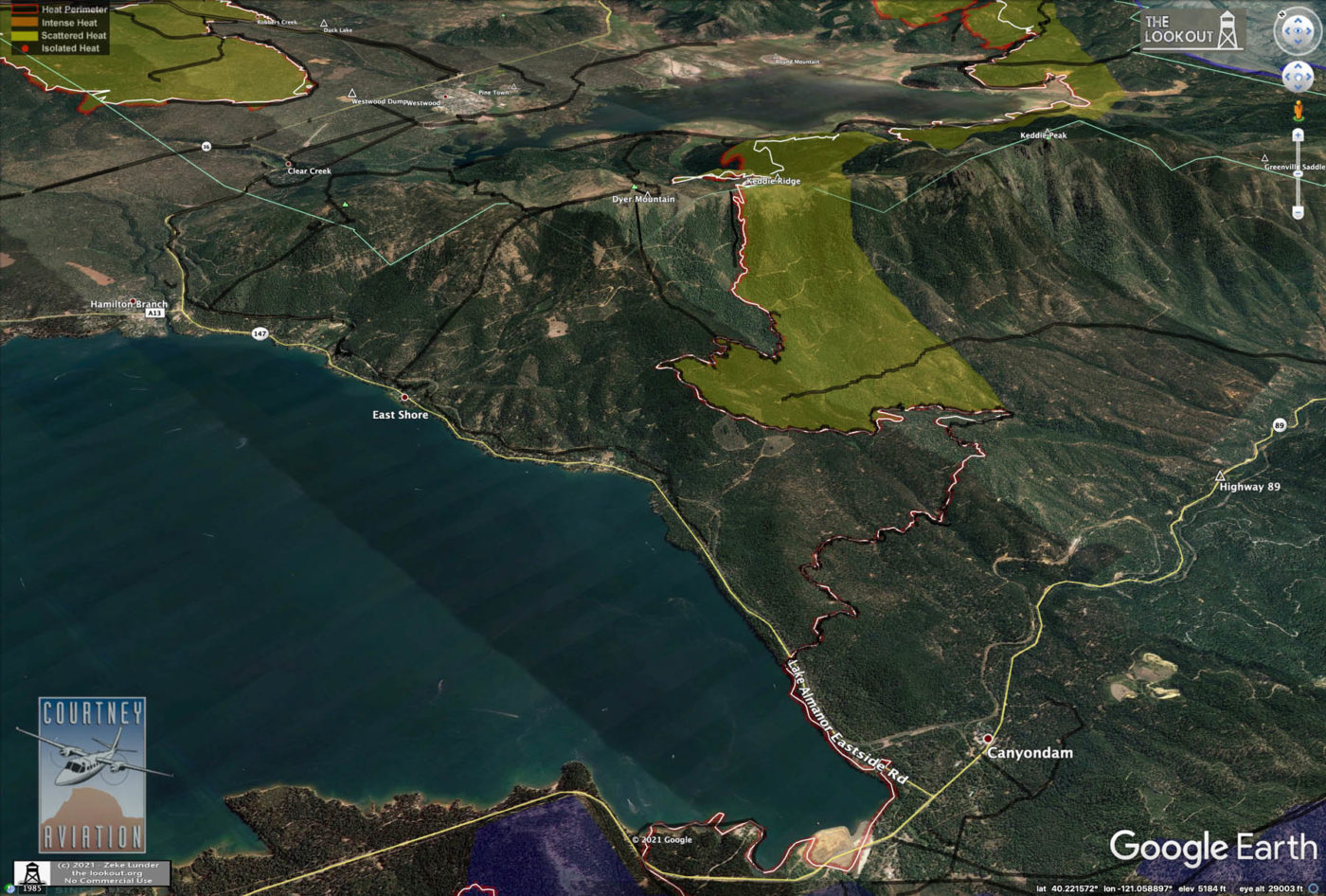 Fire has not impacted Silver Lake. 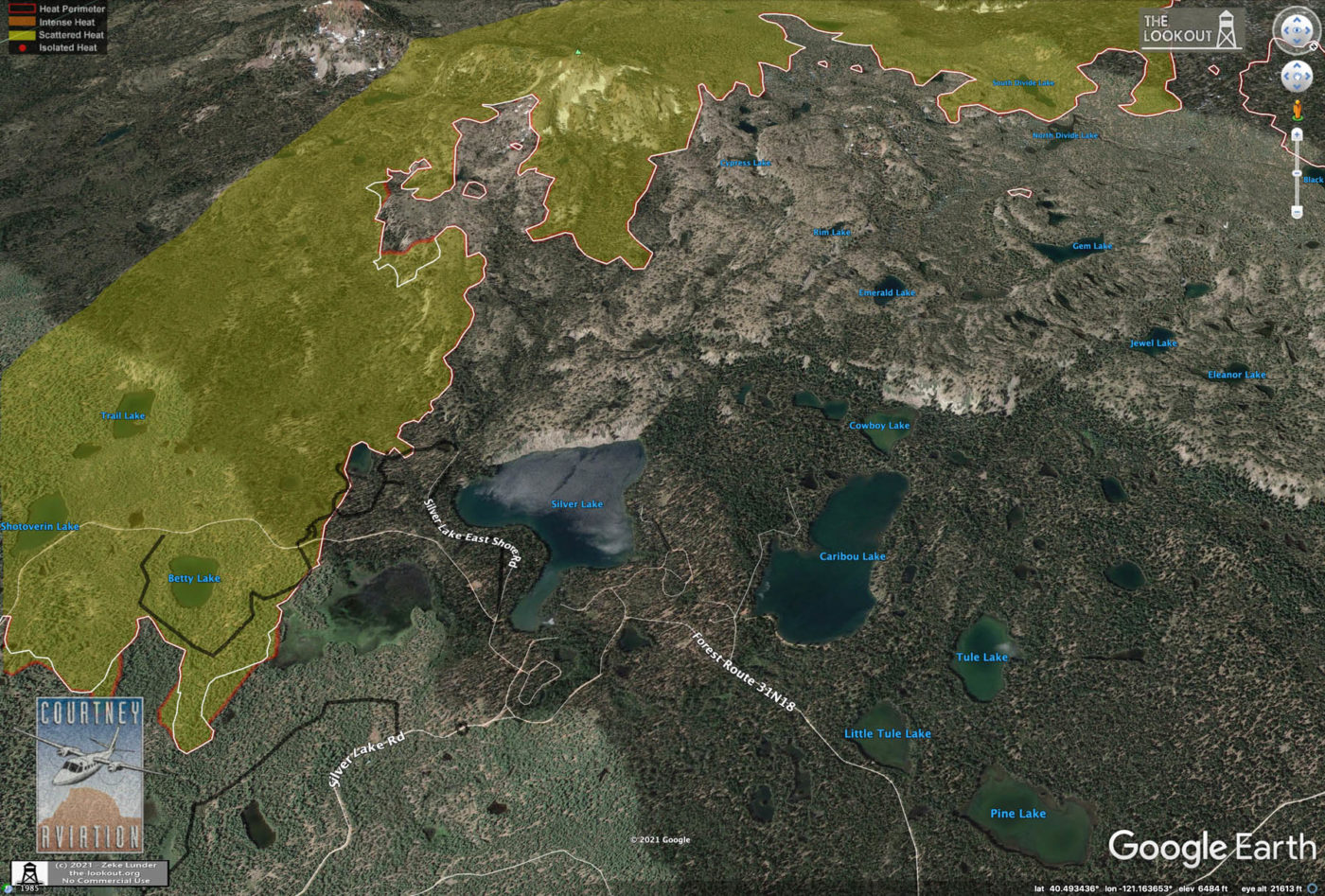 A-21 firing operations are holding, and fire has been kept south of Silver Lake Road. 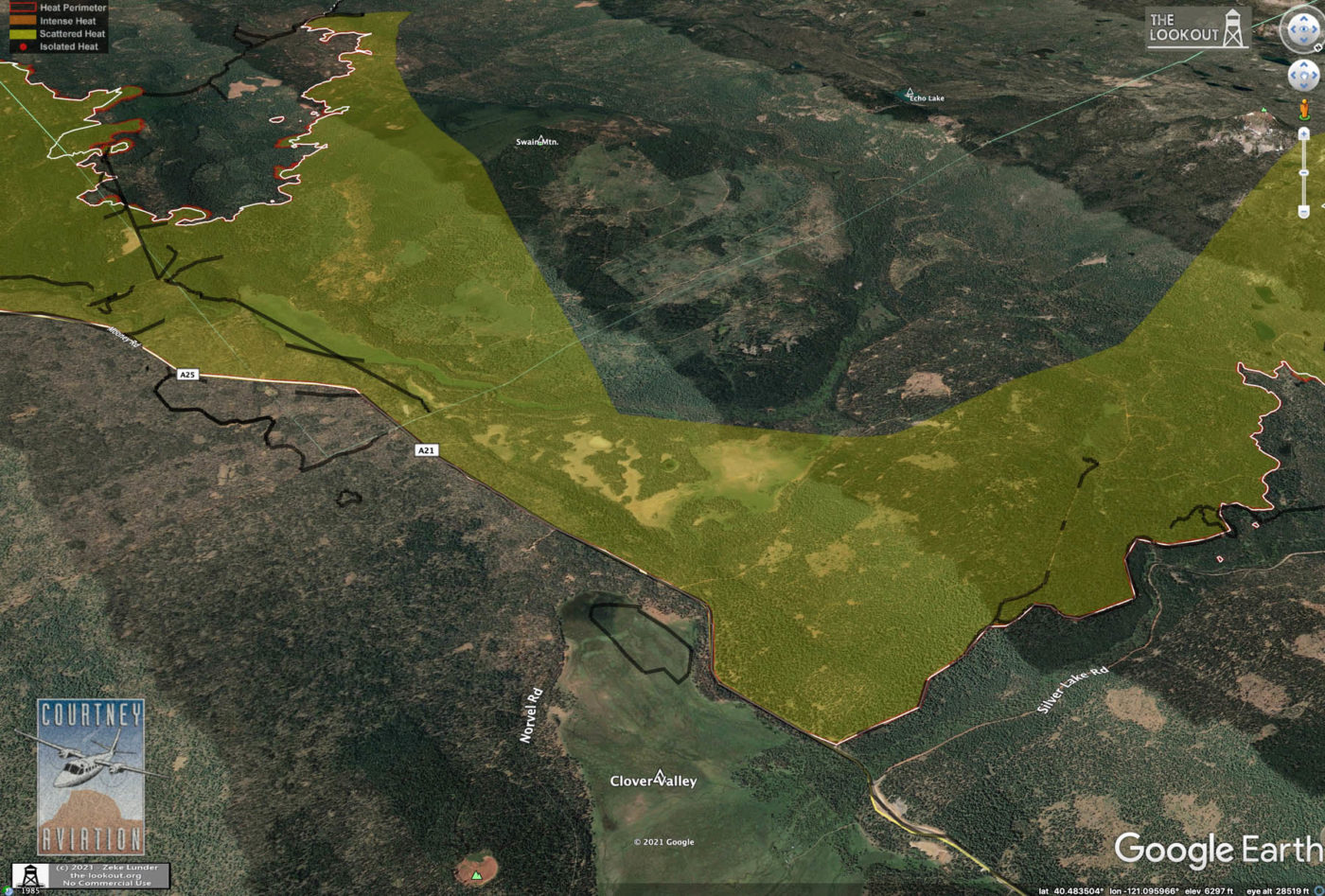 Fire has burned around Juniper Lake. Some of the largest spread in past 24 hours has been to northwest in Lassen Park near Snag Lake, and toward Drakesbad. Blue areas in this image burned in 2004 and 2005. 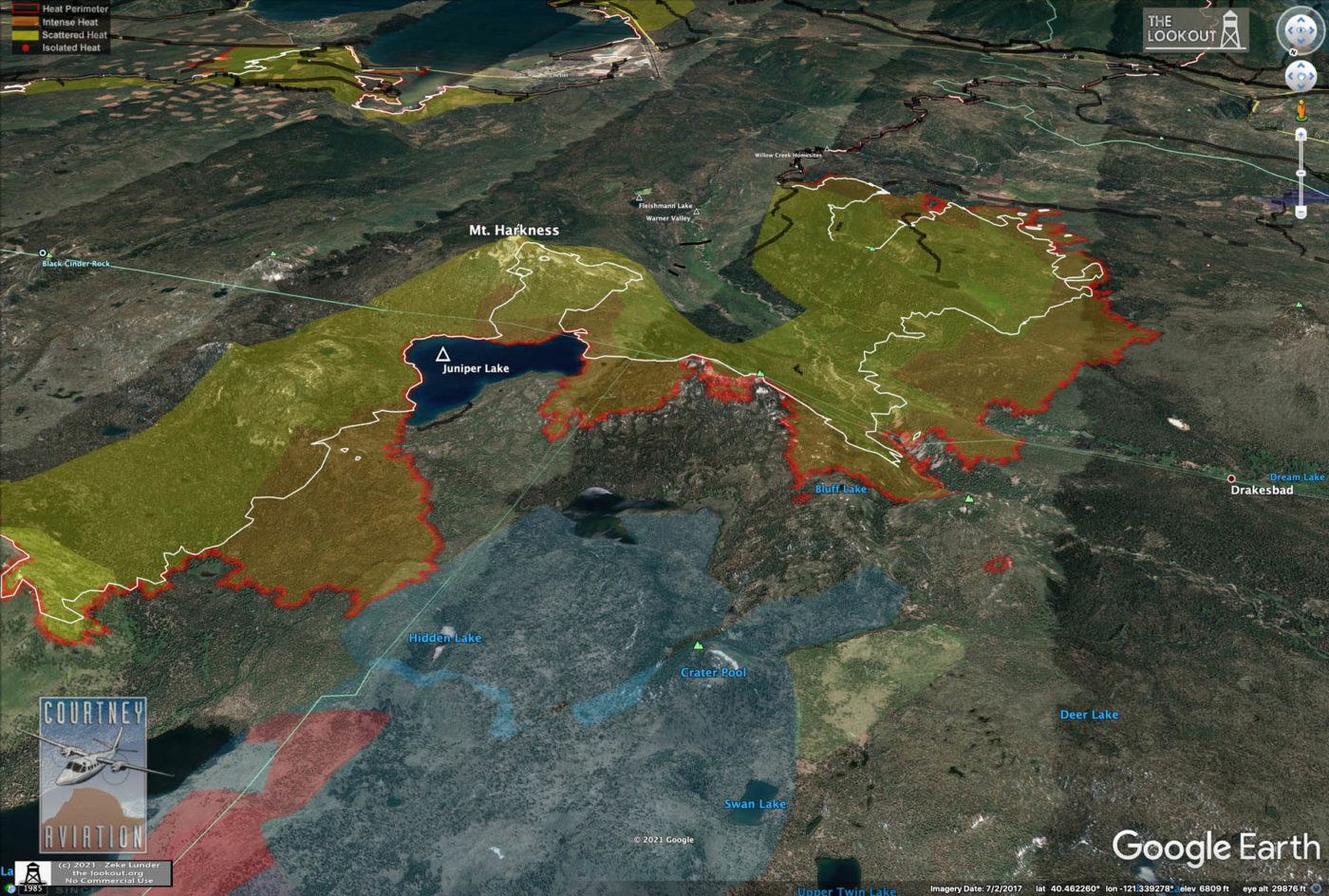 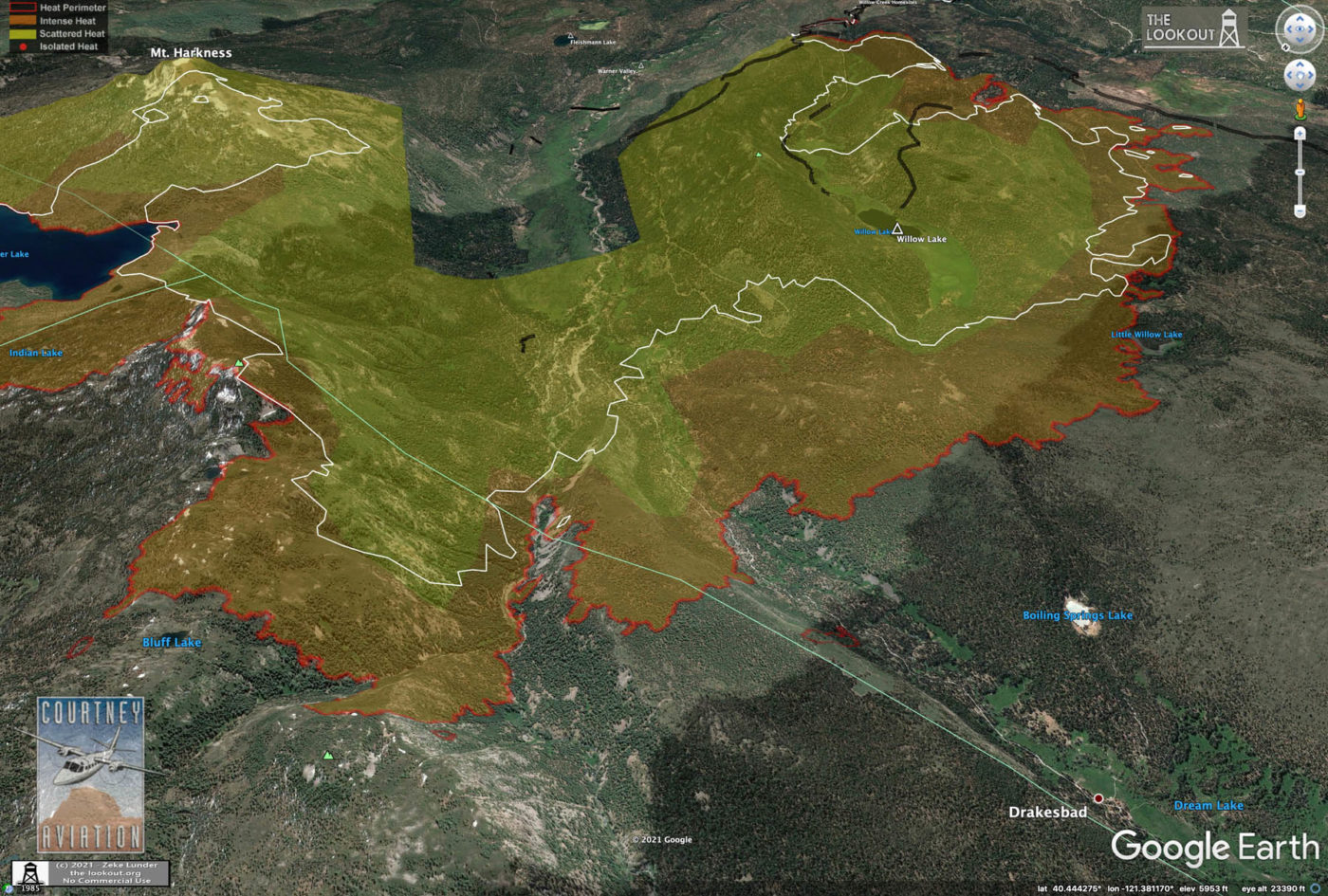 No new spread toward Willow Creek Homesites or south of there on the west flank north of Hwy 36. Looks like mayber there is some firing on the road to Domingo Lake. 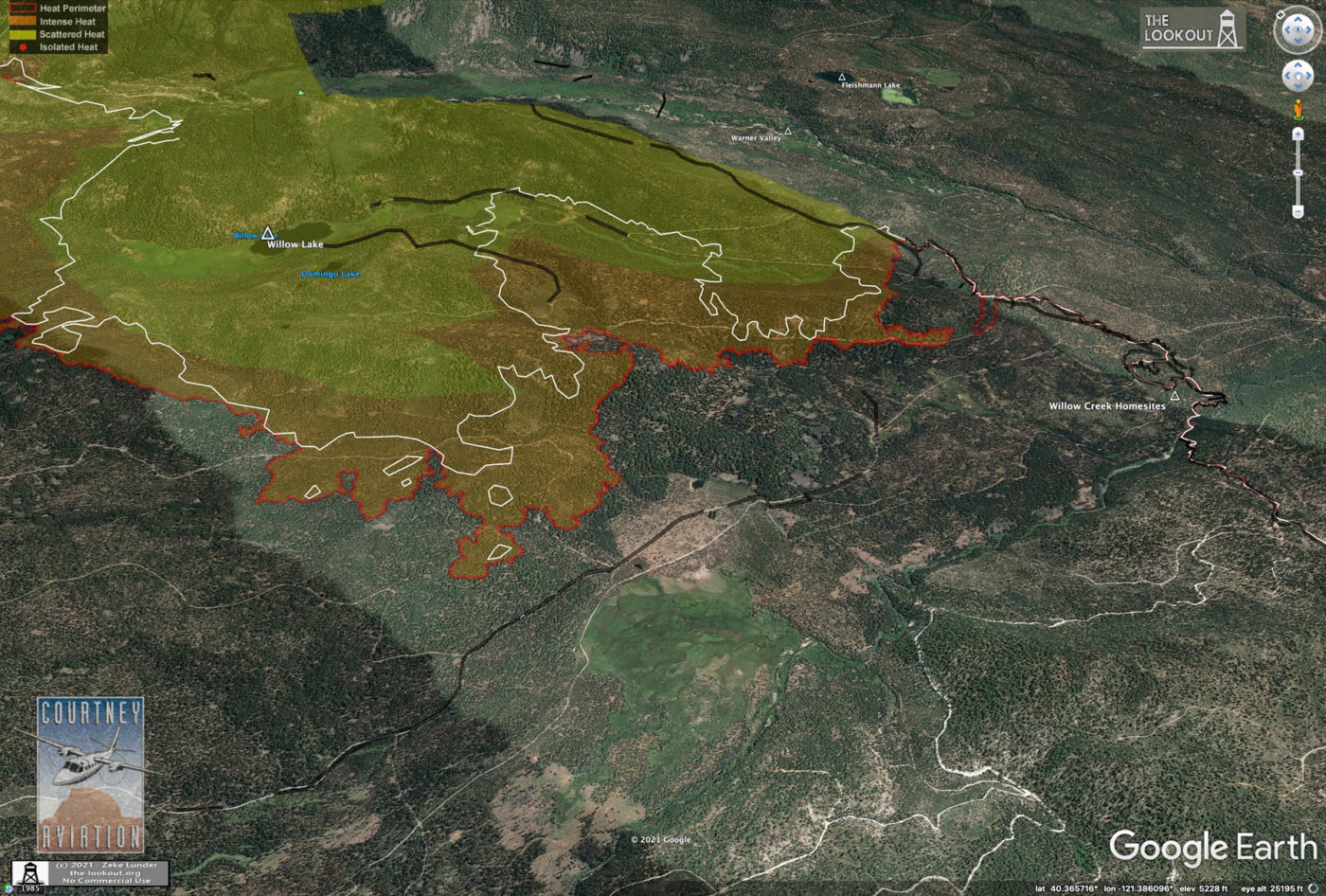