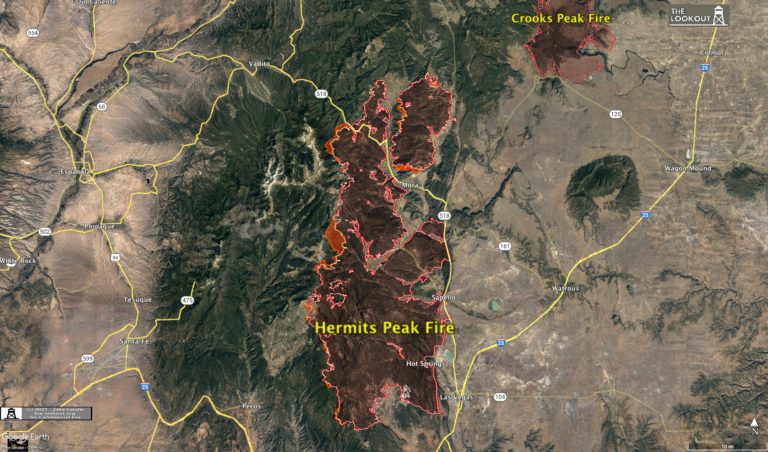 Hermits Peak and Cerro Pelado Fires May 15, 2022 Maps and Captions: Ryan Cowper Stephens Detailed New Mexico fire updates may also be found at: https://nmfireinfo.com/ https://inciweb.nwcg.gov/ *Our Lookout fire maps are high resolution. Click the maps to open them in a separate window, there you can zoom and scroll around the map to take … Read more

HR.5631 – The Tim Hart Wildland Firefighter Classification and Pay Parity Act is moving through committees in the House of Representatives. This is an extremely important piece of legislation for Federal wildland firefighters, who are actually not classified as being firefighters at all. Most of us who have worked for Federal agencies have been classified … Read more 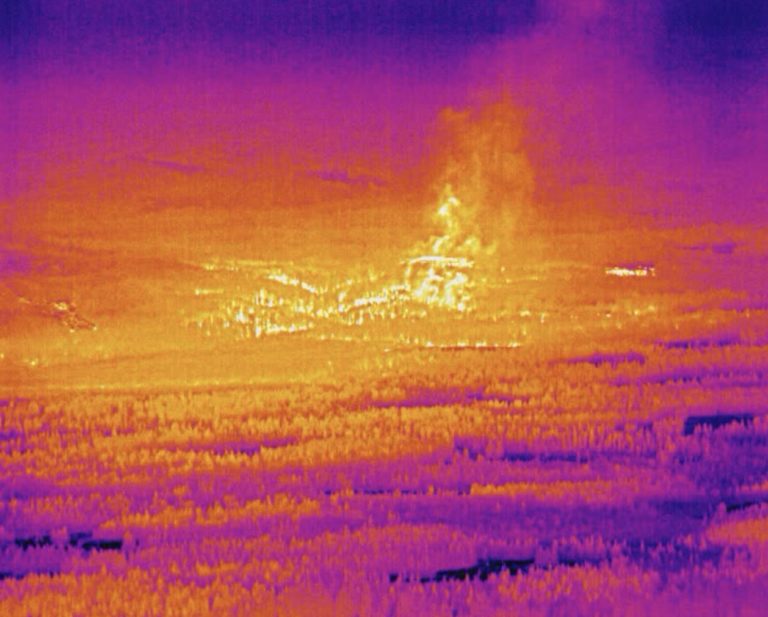 Another nerve-wracking day on the Dixie, waiting for Westwood to burn. And it did not. I mainly concentrated on the Westwood Sector today, and took it slow after being up late last night. We got an IR flight at 5:20 pm, but much of the fire activity took place after that – some portions of … Read more

The fire burned actively today on the fronts which are still hot. Things seemed to be most active around 4:00 pm. Smoke limited visibility on the webcams. This intel sleuthing means working with all the tools we have, and the platforms that update the most often are the ones that have the coarsest texture. Even … Read more

Good evening. The fire continued to burn actively on the north flank between Swain Mountain and County Road A-21, and on the east flank north and east of Moonlight Peak. The fire did not spread as far today as yesterday in these areas. Several spot fires crossed A-21. I don’t have any intel yet on … Read more

Not a lot to report since last night. Read last night’s post here. Main update is overnight IR showing spread of the 2 problem areas discussed in last night’s post. 1. East of Swain Mountain toward County Road A-21. 2. East of Moonlight Peak in the 2007 Moonlight Burn. The fire continued to spread east … Read more

Good evening. It was an active afternoon on two portions of the fire today. The smoke cleared out a little and northern and eastern flanks of the fire started to become active about 12:30 today. Most of the rest of the fire had relatively minor spread. Two areas of concern: 1. The northern edge made … Read more

Heavy smoke is in the forecast for some time, now. Morning AQ is at apocalyptic levels, though we aren’t under the Martian sky like we were last September. Looking for some info on a longer-term forecast and how that will affect smoke dispersion, will update when I have better info. The forecast below says a … Read more

I do not have a lot to report about the Dixie Fire today. Heavy smoke blanketed the fire all day. This, coupled with mild winds, helped moderate fire behavior. Looking at the big-picture weather satellites, it looks like the fire spread on its edges, to the west and east, but not very far. Fires need … Read more

8/5/2021 – 8:00 pm. Well today was a harrowing day, and from afar, in Chico, it’s hard to have any idea what is going on up in the hills. My brother called from Quincy after bailing out of Taylorsville early afternoon and said it was very calm there, and that he was glad. We don’t … Read more

Well, things are really going to hell on the Dixie Fire. The forecast frontal passage is starting to affect the fire, winds are shifting to out of the west. 8/5/2021 – 4:30 pm. What this means, basically, is as the front passes, we are going to get radical wind shifts, and the potential for thunderstorms … Read more

For people in Northeastern Califorina, yesterday was obviously a historic/generational event that will be remembered in the same way we talk about the 1910 Big Blowup, Loma Prieta Earthquake, or the 2018 Camp Fire. But today we’ll being having ‘aftershocks’ so the post is going to look mainly forward at the next couple of days.

This report focuses on the northern parts of the fire. IR mapping shows no growth of the fire in areas around Jonesville, Quincy or Bucks Lake.

We are still in critical fire weather conditions. The forecast for today:

The main problem with the weather forecast is after keeping on blowing from the south for most of the day, we are forecast to get strong west winds this evening which will turn to NW tonight. This has the potential to take a lot of the flanks on our long new south>north fire runs and squeegee them sideways to the east. We fight fire along the flanks, so when the flank turns into the head, it is dangerous for firefighters. I’ll break out the fire behavior concerns for area of the fire in the images below. The main thing is to be aware if you have fire west of you right now, it may be moving your way tonight.

Imagery is still showing the bulk of the fire spread yesterday went around Chester and the Collins Pine sawmill. For anyone out there wondering why we are having problems controlling this fire, or why we aren’t using more bulldozers, today’s piece of trivia is that the ‘Superditch’ flood control canal just west of Chester is 100 yards wide, and it didn’t stop the fire at all.

Scroll down for Greenville-area maps. 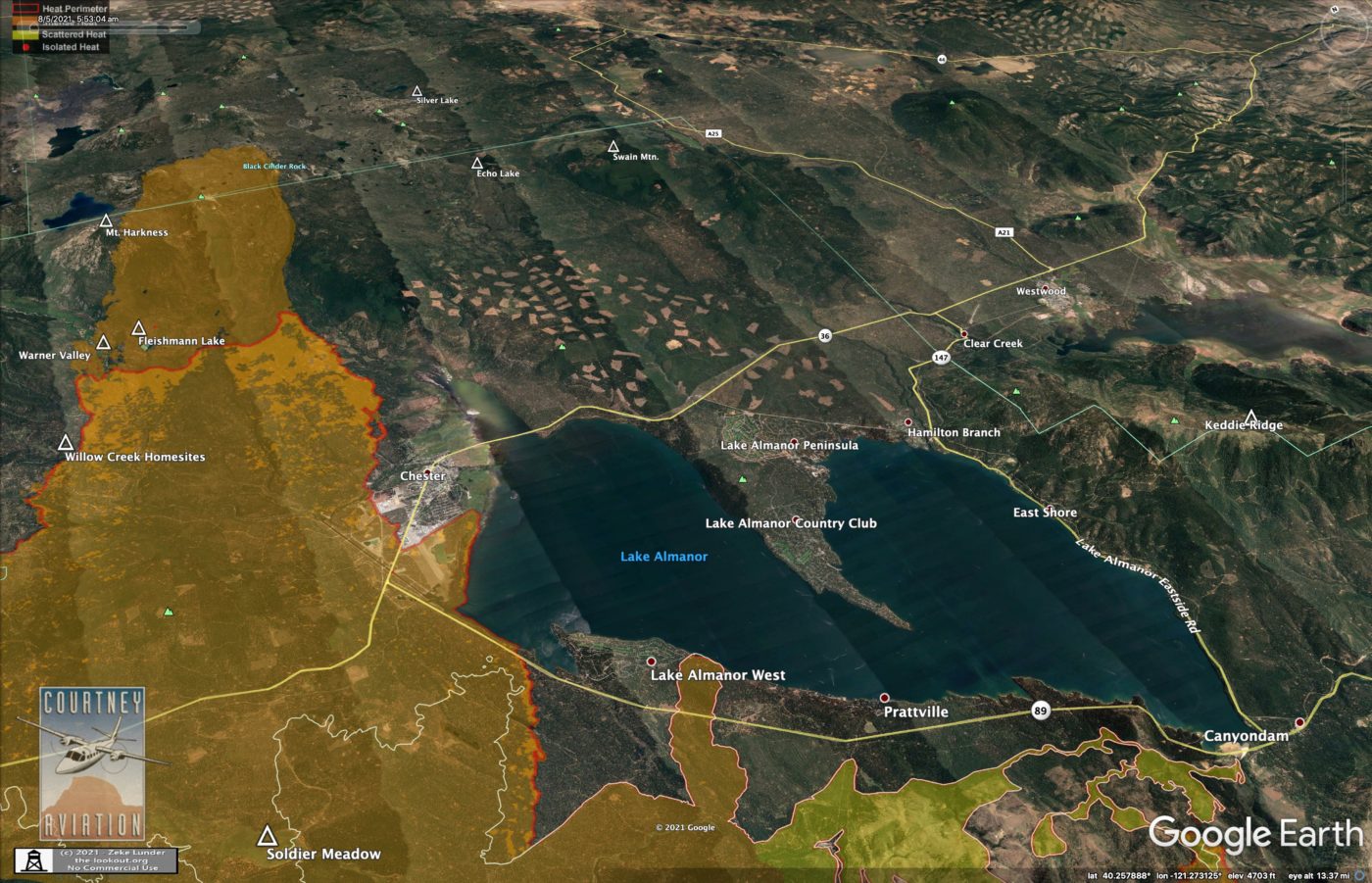 The finger of fire that reached out for Almanor West did not spread yesterday, however there was spread toward Almanor West from the west from the intense run that took off toward Chester yesterday. Lake Almanor West may be threatened by west winds this evening, as may be the northern edge of Chester. The fire will spread further up toward Lassen Park, and likely get pushed into the clearcuts and plantations south of Echo Lake. Depending on how far east the fire spreads, forecast northwest or north winds may threaten the Peninsula, Hamilton Branch, or Clear Creek. For reference, the fire spread 8 miles to the north yesterday around Chester, and is currently 12 miles from Clear Creek and 8 miles from the Peninsula. On fires over the past few years, we have observed enhanced rates of fire spread across areas with clearcuts and tree farms. Nothing political here, just the facts. The cutblocks are hot and dry, and exposed to the wind. Fire likes them. To the timberland owners credit, the clearcuts in this photo look like they’ve had good slash cleanup. Even so, I don’t expect them to slow the fire spread down. 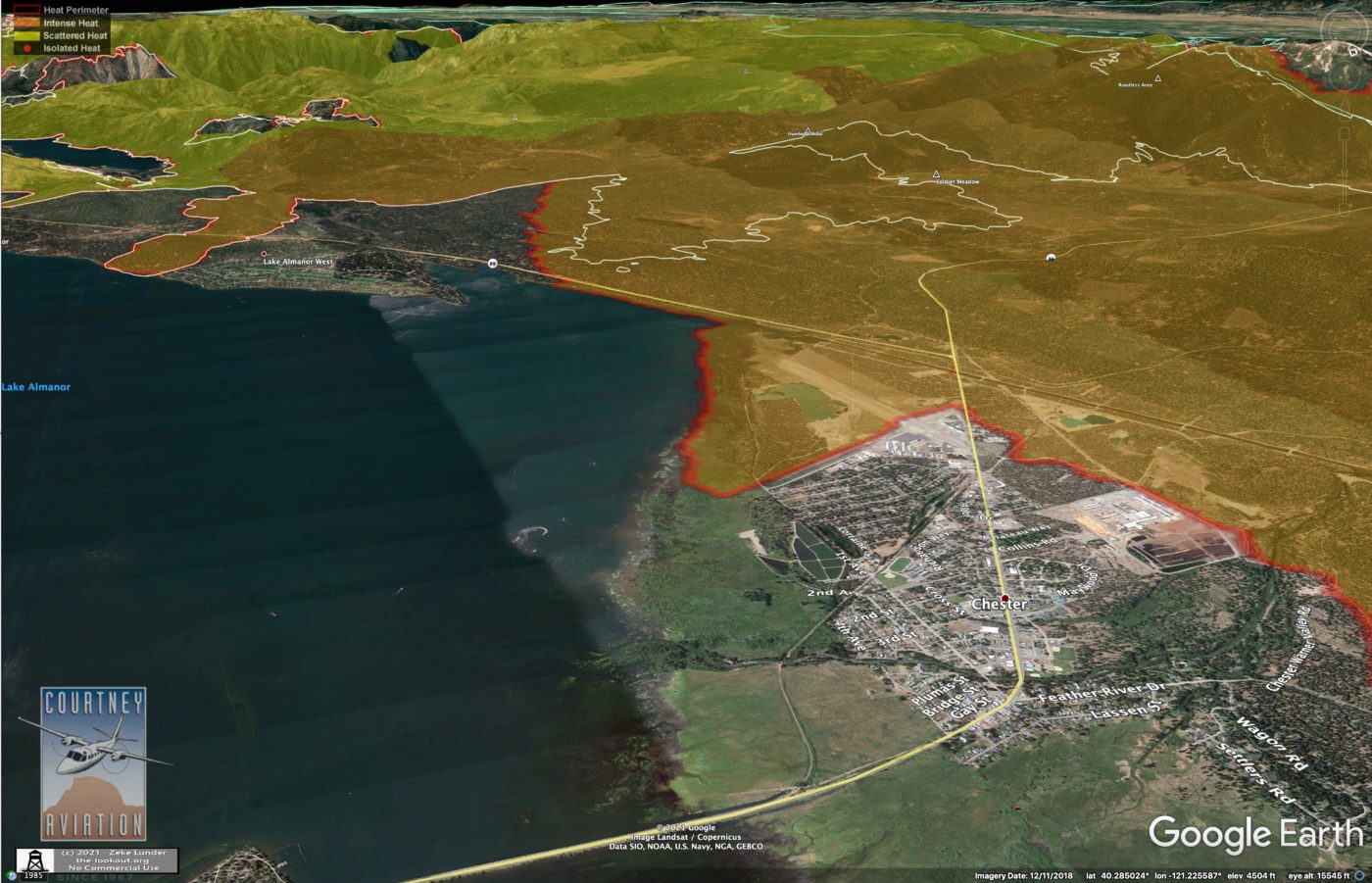 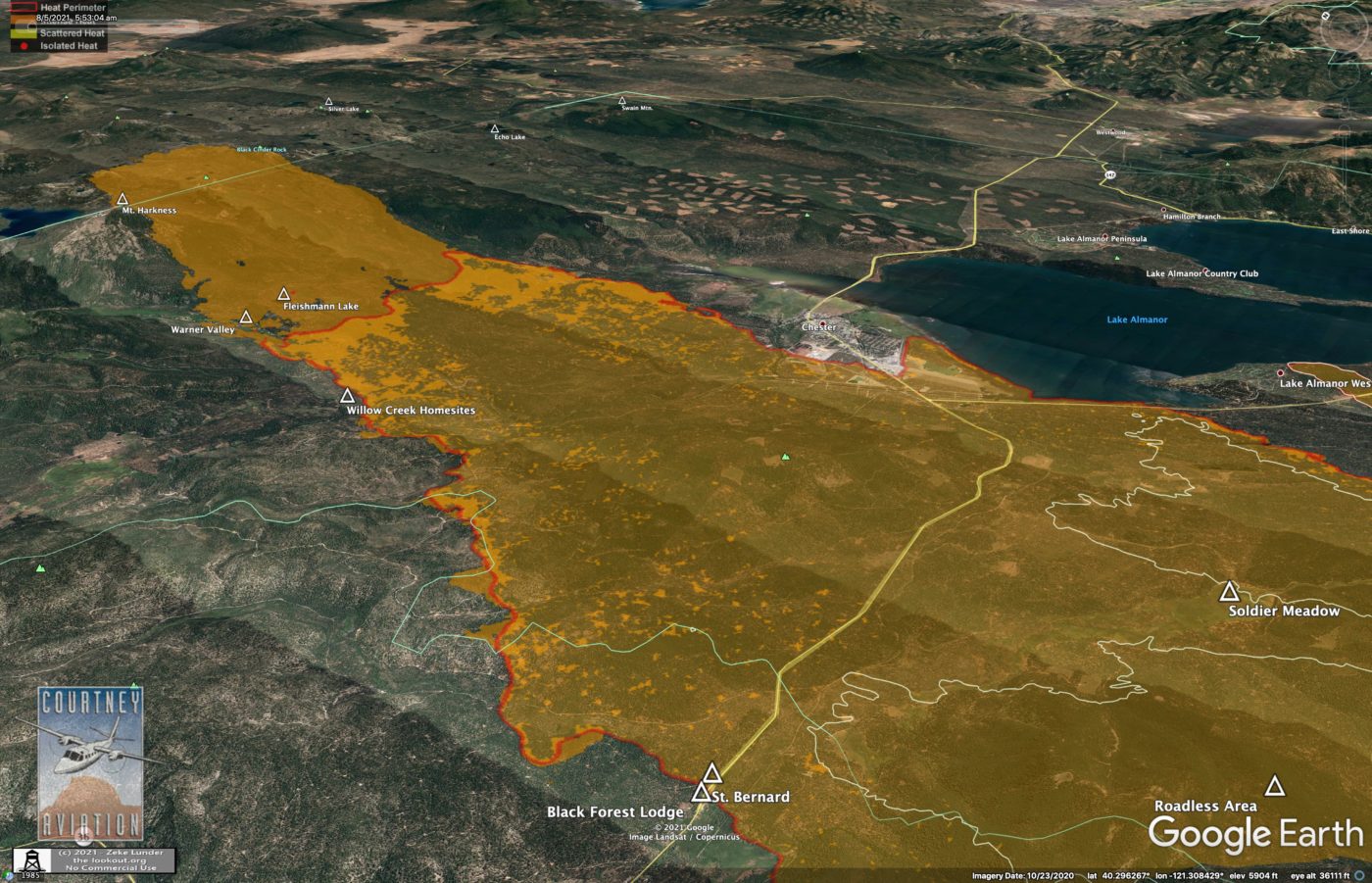 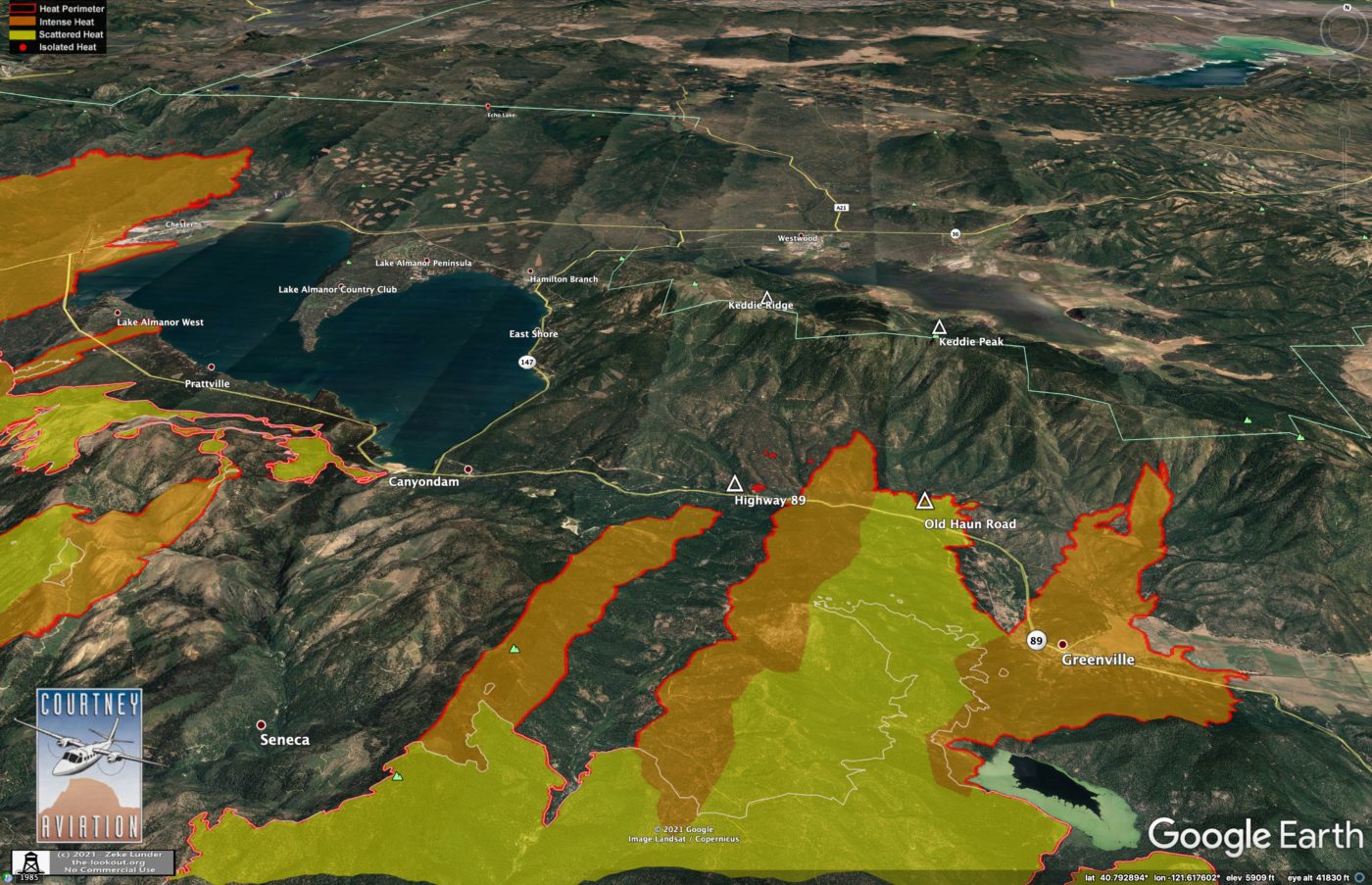 Looking north over Canyondam and Highway 89. Fire ran 4-5 miles yesterday. There was new spread from Butt Lake up toward Canyondam. Firing operations below the Dam have been holding for 2 weeks, but it is likely the westerly winds this evening will push the fire east across the North Fork Feather River and threaten Canyondam. Winds are forecast to switch back to southerly midday Friday. The main fingers in this view will continue to push up Keddie Ridge. West winds tonight could push fire in Pecks Valley, north of Greenville, to the east, threatening the North Arm of Indian Valley and North Valley Road. IR imagery from last night, 8/4/2021, at 11:45 pm. White line shows 22 hrs of fire spread. 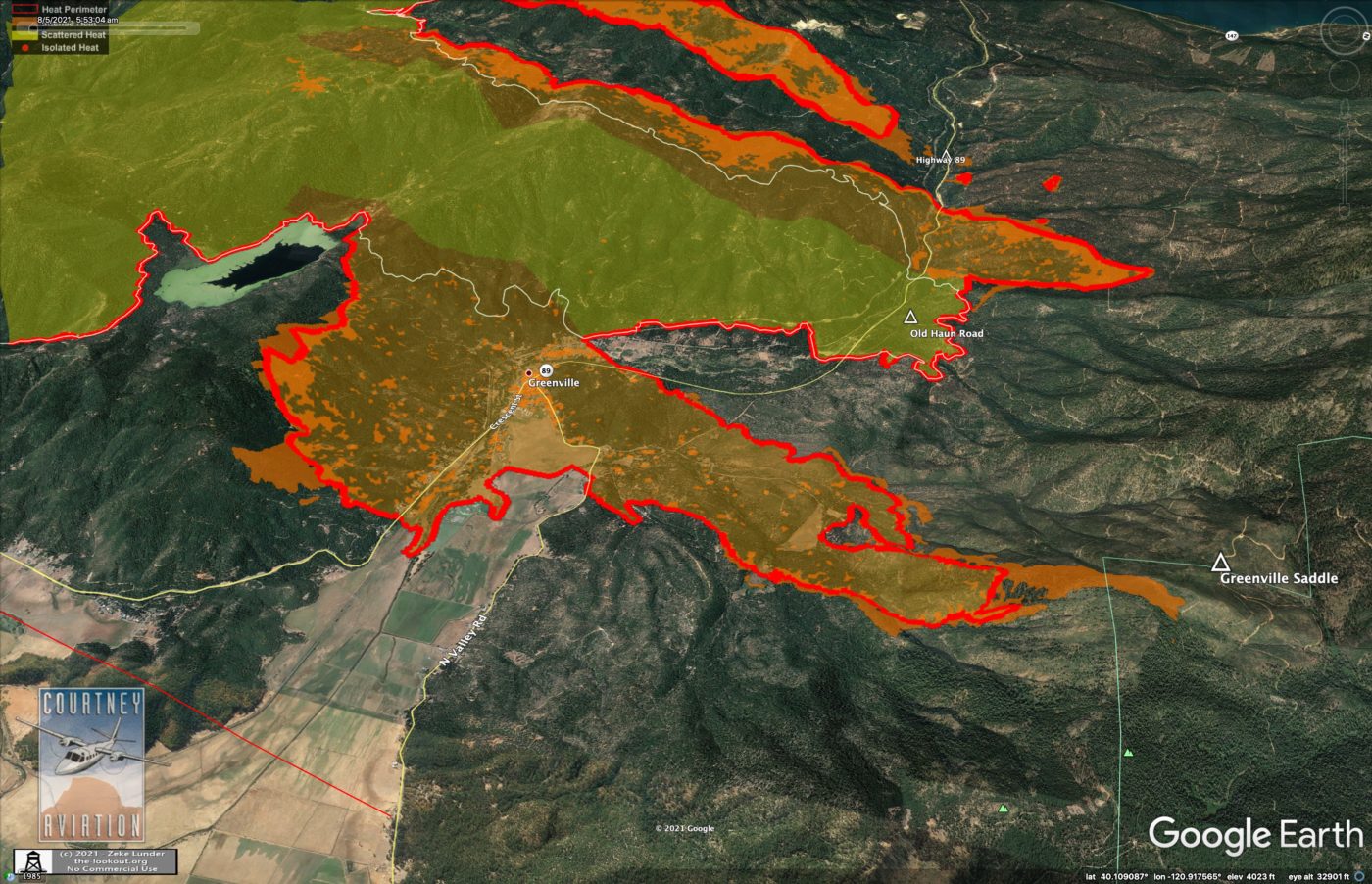 Poor Greenville. Looking West. Smoke has already lifted out of the Valley at 7am, and fire crossed Greenville Saddle last night. The portion of fire which slopped across Highway 89 2 days ago at Old Haun Road was checked up with dozer line and held thru yesterday, but a new run to the west is going to burn up Keddie Ridge anyway. Yesterday afternoon, the fire moved east on the north slopes above Highway 89 toward Forgay Point. The east flank of the run up Greenville Saddle will threaten North Valley Road and the North Arm if it gets a strong push from NW winds tonight. There aren’t many good places to control the fire as it moves toward the bottom of the screen. IR imagery from last night, 8/5/2021, about 6:00 am. White line shows about 30 hrs of fire spread. 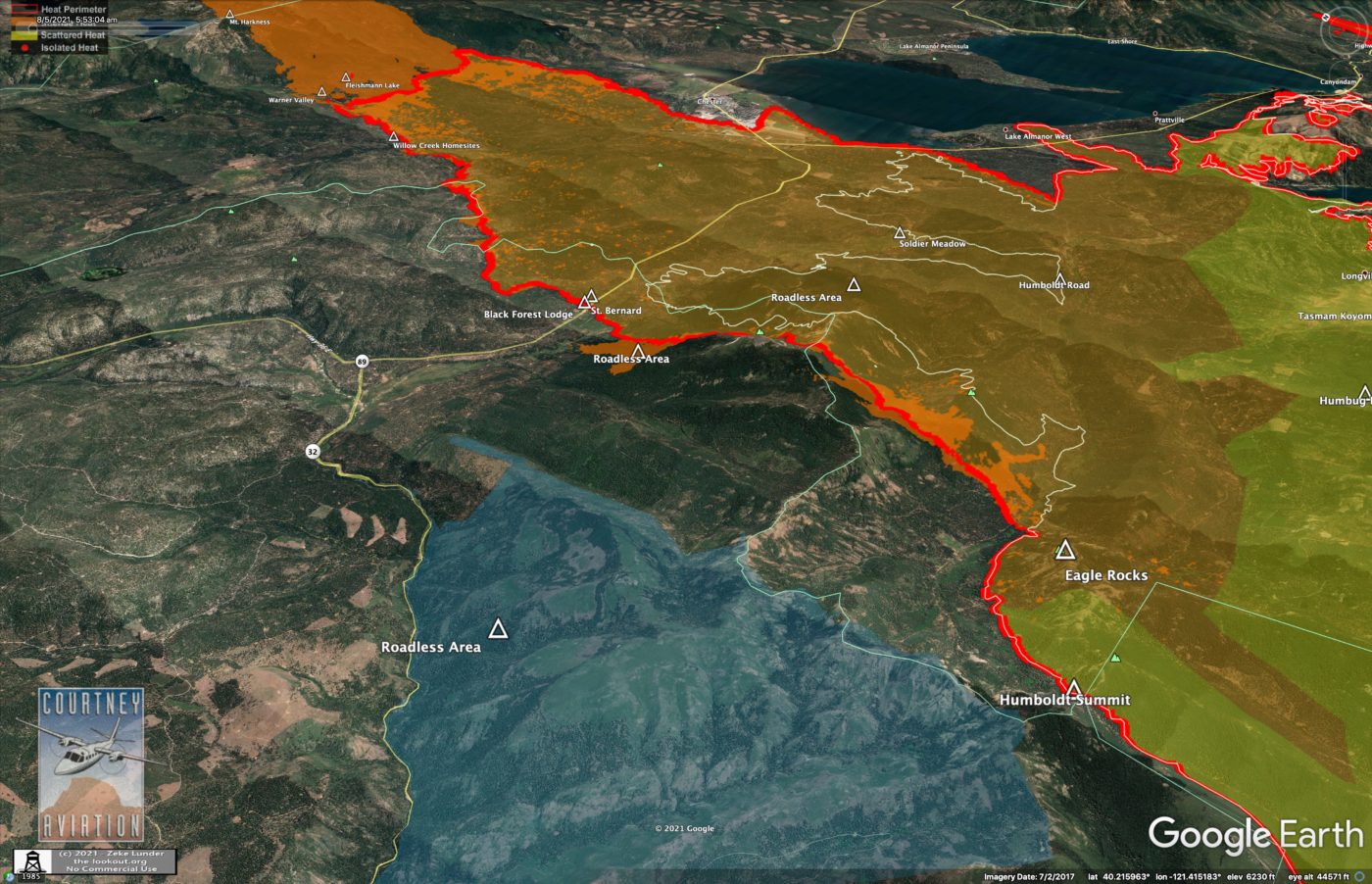 Finally, this section is North of Jonesville and Humboldt Summit along Humboldt Road. The fire  has crossed Humboldt Road for most of its length now, and is flanking to the west toward Highway 32. Though this is not ideal, at all, we may get some lower severity fire effects here, in an area which has had fire in past 15 years, and needs it again. We have few options for managing fuel loads and forest density in the roadless areas of Deer Creek, and the last fire that burned here (shown in light blue), in 2008, thinned thick forests and left many of the largest trees. Nevertheless, this portion of the fire has few options for control short of running bulldozers down the PCT (along the green county line), which probably wouldn’t work, anyway. It will be interesting to see how this flank of the fire pans out, and I’ll write more about it later. IR imagery from last night, 8/4/2021, at 11:45 pm. White line shows 22 hrs of fire spread.

I don’t really know how to write about any of this. Today was terrible for everyone involved – from expats living away watching the awful IR webcams to the people who had to run for their lives. The losses in Plumas County are pretty staggering and personal. Greenville felt the full force of the Dixie … Read more

The Dixie Fire continues to exceed everyone’s expectations. Yesterday the fire front moved between 2.5 and 3.5 miles toward Highway 36 and Chester on flat ground. This is pretty unusual for what I have seen in Northern California. Usually, our big fire runs are driven at least partially by slope, as it is easier for … Read more