7am on September 27, 2021 – Weather update for the Southern Sierra Fires

Below is a Tweet from an Incident Meteorologist regarding a weather shift that could have significant impacts on the South Sierra fires:

Yesterday, the bulk of the action was on the south and east portion of the fire. Winds pushed the fire southeast towards the Kern River and the fire moved through Tobias Peak. The fire progressed to ridge lines just above the Kern River.

Winds today are expected to be strong with potential gusts downslope towards the Kern River. 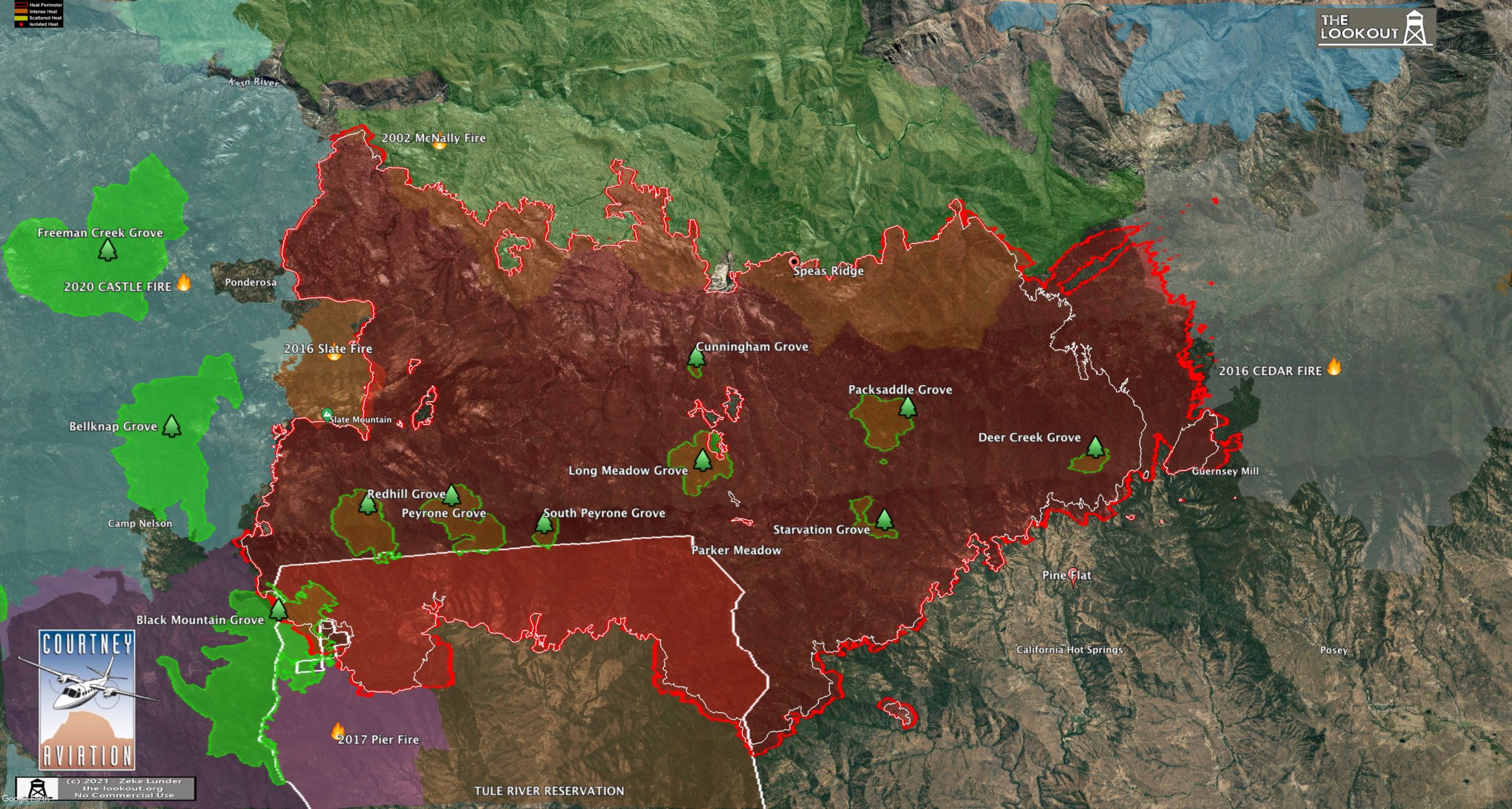 The following text is copied directly from an update posted by the Sequoia National Forest. The text in RED are captions written by Ryan Stephens for the maps.

Gusty winds will be a concern for fire managers Monday and Tuesday. The southeast part of the fire is the most vulnerable to the strong winds

On the northeast side, the fire continues to move downslope toward Lloyd Road. There were a few spot fires, but crews were able to extinguish and contain them while they were still small. In the M99 corridor, on the fire’s east side, the fire is actively moving downslope toward the Kern River. In the next one to two days, the fire could get pretty close to the river. Visibility on the eastern half of the fire was very low, so aircraft were unable to assist ground crews today in that area of the fire.

Firefighters and engines attempted to get to Tobias Peak today to assess the lookout tower, but the fire was still too active and hot, and they had to turn around. In the Sugarloaf Village area, firefighters are still engaged in structure defense. They’re using direct fire-suppression tactics along the fire perimeter when they can, but structure defense remains the primary mission in that area.”

Looking north. Recent fire footprints are play a huge part in determining the progression of wildfires. In the next couple of days, higher winds are expected to push the Windy Fire to the south and east. The 2016 Cedar Fire footprint is the gray filled perimeter in the lower portion of the map. The 2002 McNally Fire is the light Green filled perimeter to the right of the Windy Fire.

The 2002 McNally fire will play an especially interesting role in fire progression over the next couple of days. The fire burned exceptionally hot and transitioned much of the area within the footprint from forest to a more grassland and brush model fuel type. These fuel types are highly susceptible to wind-driven fires. Over the next two days, incident meteorologists expect sustained wind in the teens with gusts to 30 mph. 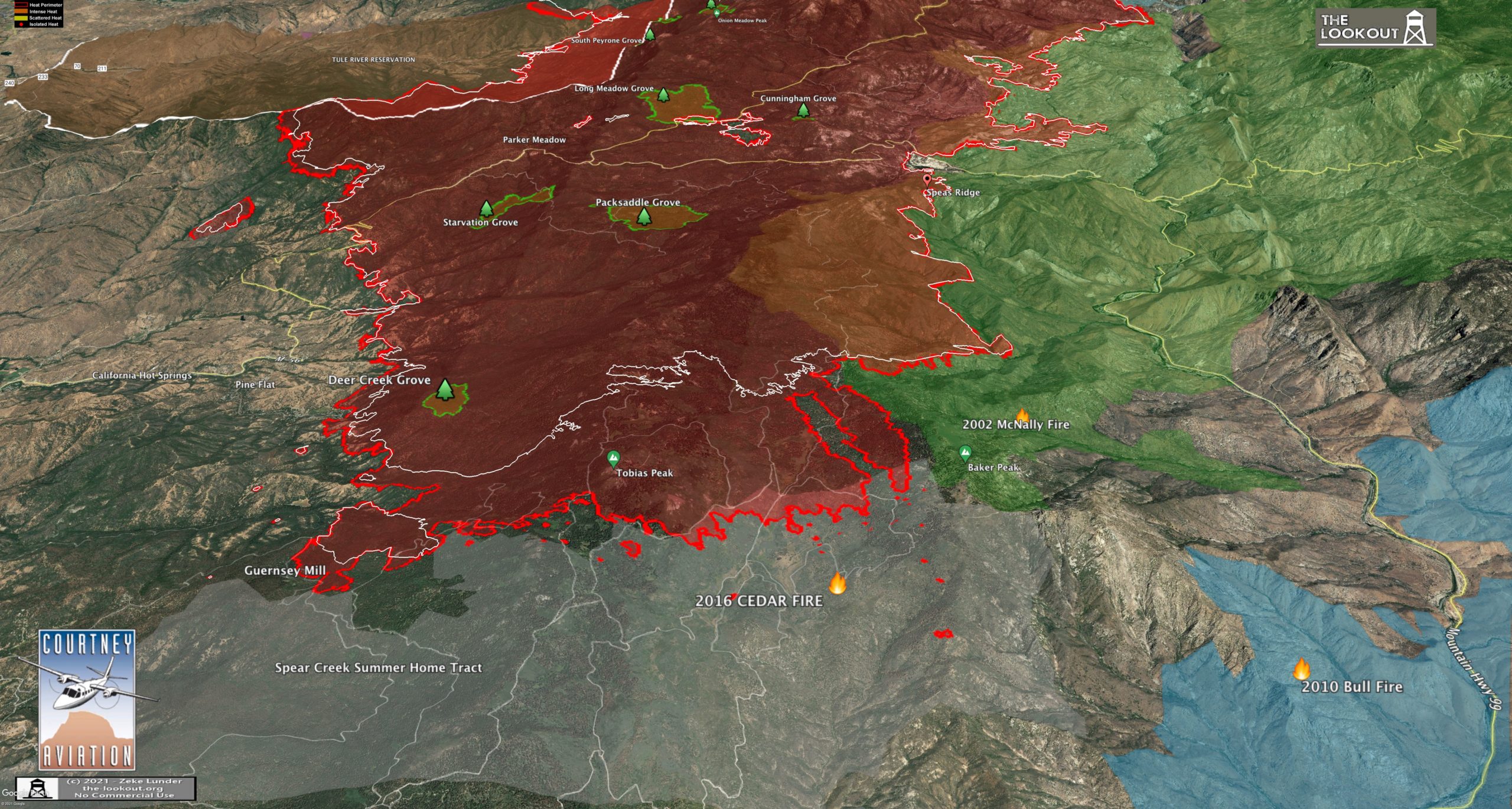 “On the southwest side, in the Pine Flat area, the fire continues to move downslope toward dozer lines. Crews are mopping up hotspots along the dozer lines that extend into California Hot Springs. All along the west side, they are constructing dozer lines and handlines, using an indirect-suppression strategy away from the fire’s edge. Crews conducted a  successful firing operation on the Two and a Quarter Road, moving south toward Wheaton. Clear skies allowed aircraft to support the crews with the operation.

The fire behavior analyst spent the day in the Sugarloaf area observing fire behavior. He reported the fire was moving downslope very aggressively. It was loud like fire moving uphill sounds, but it was moving downhill, which is usually more moderate. The fuel loading is immense in places. However, he has a high degree of confidence that the Cedar Fire burn scar will serve as a good barrier to fire spread in many places.” 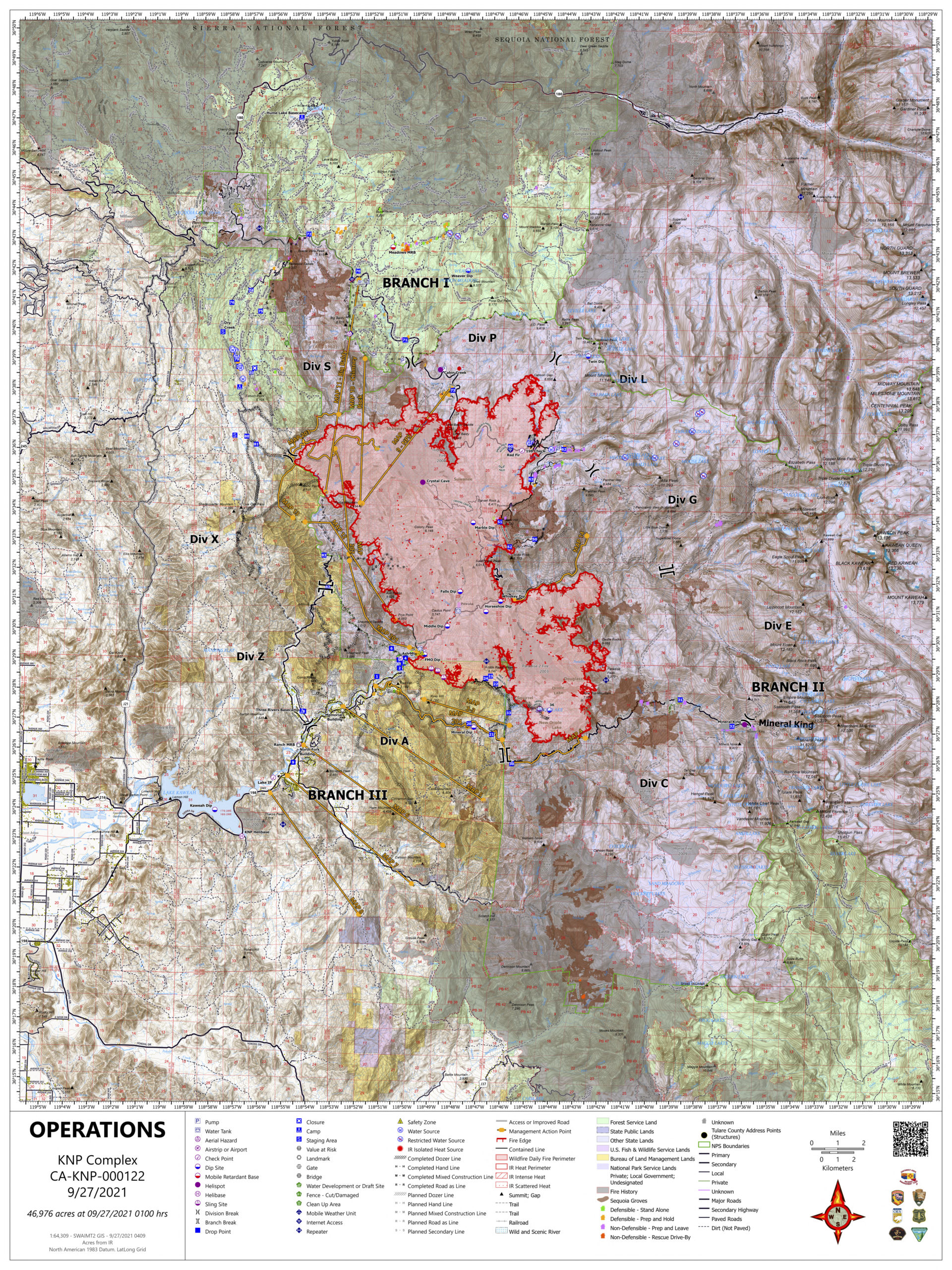 If the video doesn’t load in your browser, watch it here.

Overview of past 24 hour fire growth.

MAP LAYERS: Giant Sequoia Groves are Shaded GREEN. The white line around the KNP perimeter helps to discern roughly 24 hours of fire spread to the outer red line of the perimeter: 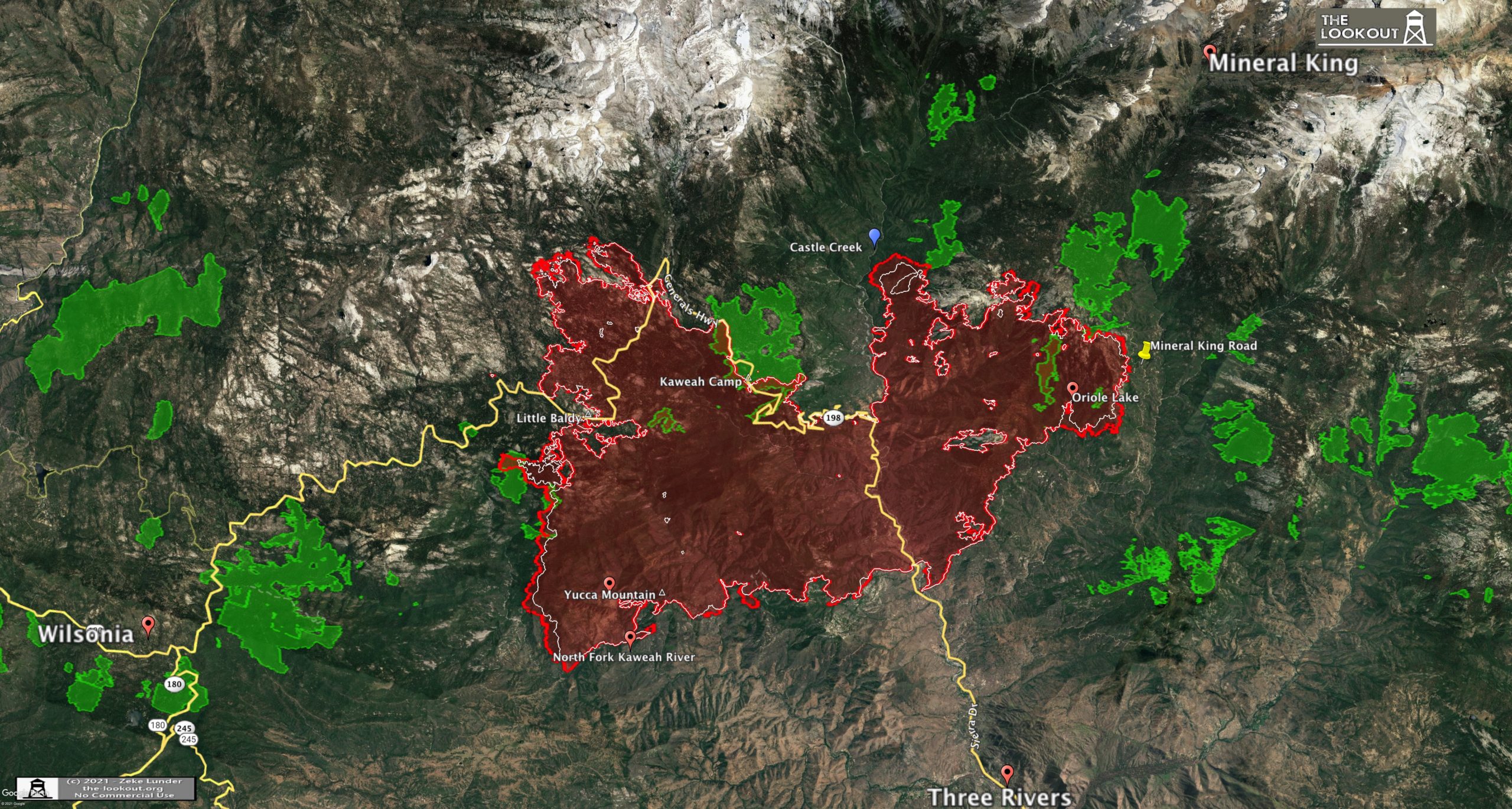 Looking southwest as the fire continues to back into the Castle Creek drainage near Castle Rocks. 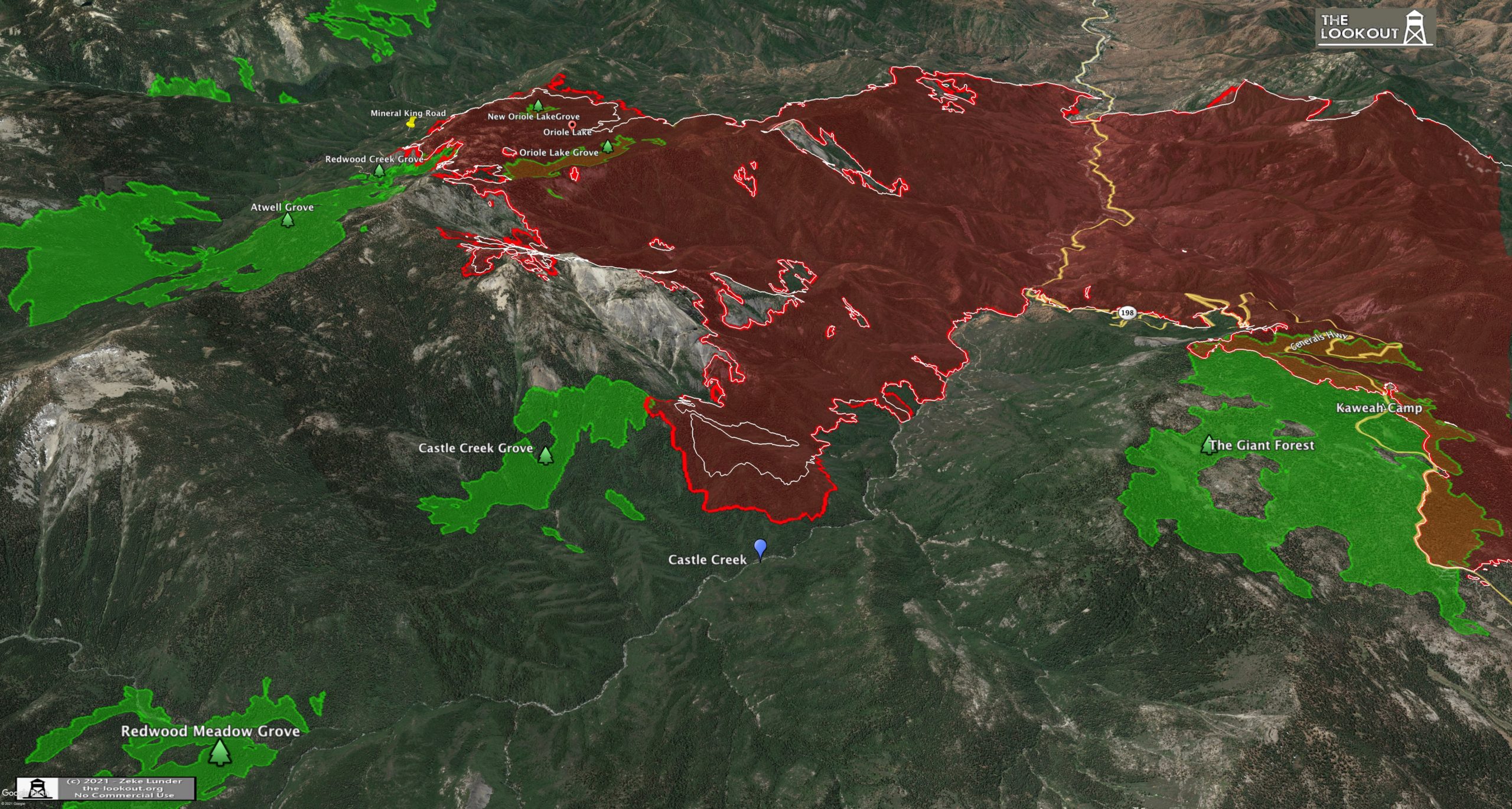 Looking north as the fire backs into several sequoia groves. 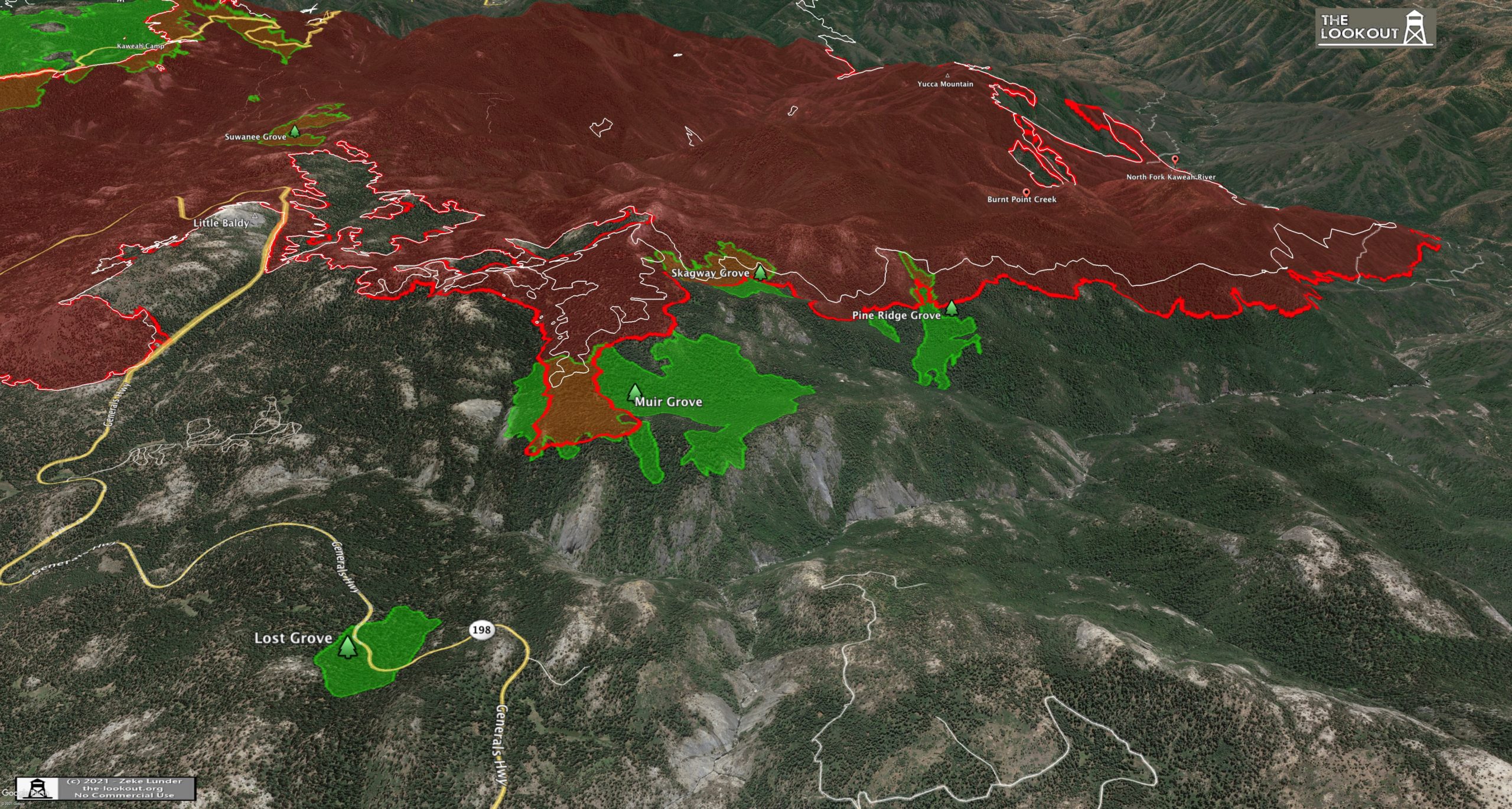