While I was writing on KNP this morning, the Windy was making a major push up toward Tobias Peak.  About 4:30am the fire overran the communication site at Tobias peak, visible on the remote cameras stationed there.  It appears from the timelapse footage that several crown runs originated to the west/northwest of the site close distance and eventually swallow the site. 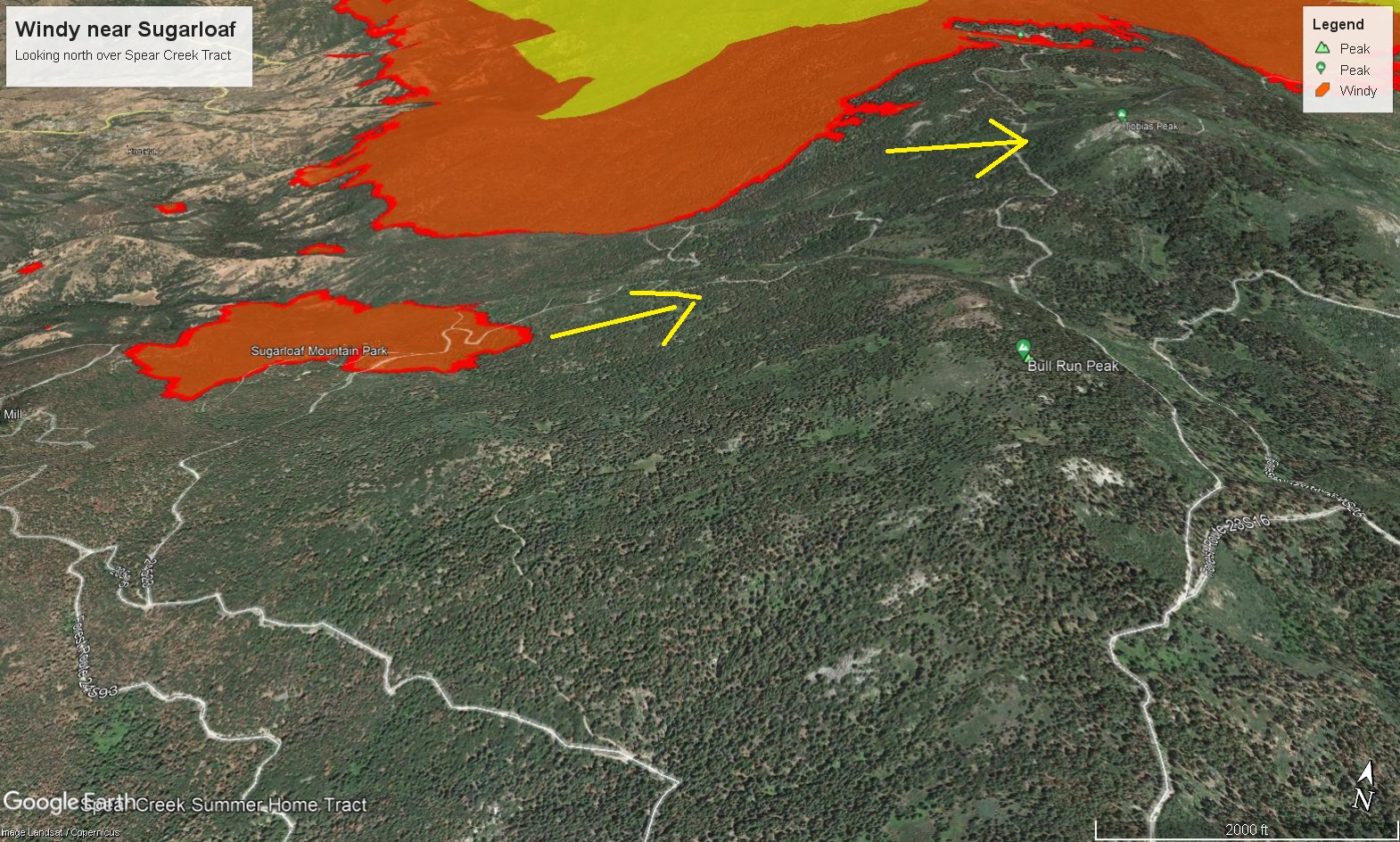 Large yellow arrows represent my guess at the fires routes of spread. Heavy continuous mixed conifer forest fuels ~4500ft (true fir subalpine ~7000ft ) have been present throughout this fire and continue to the south into the Castle Fire.

Here is a webmap Chuck Ervin worked up for us showing tree mortality in the areas burned by the Windy Fire. TPA = Trees Per Acre. Darker purple, more dead trees.

The following text is copied directly from an update posted by the Sequoia National Forest. The text in RED are captions written by Ryan Stephens for the maps.

The Windy Fire is currently estimated to be 74,531 acres (a 3,182-acre increase from Saturday morning’s reported acreage). Containment is two percent. The acreage value is a snapshot in time, and because this fire remains active overnight, expect another increase in acreage tomorrow morning. The infrared flight also occurs at night, providing fire personnel in the situation unit more accurate data to estimate the fire’s size and perimeter. 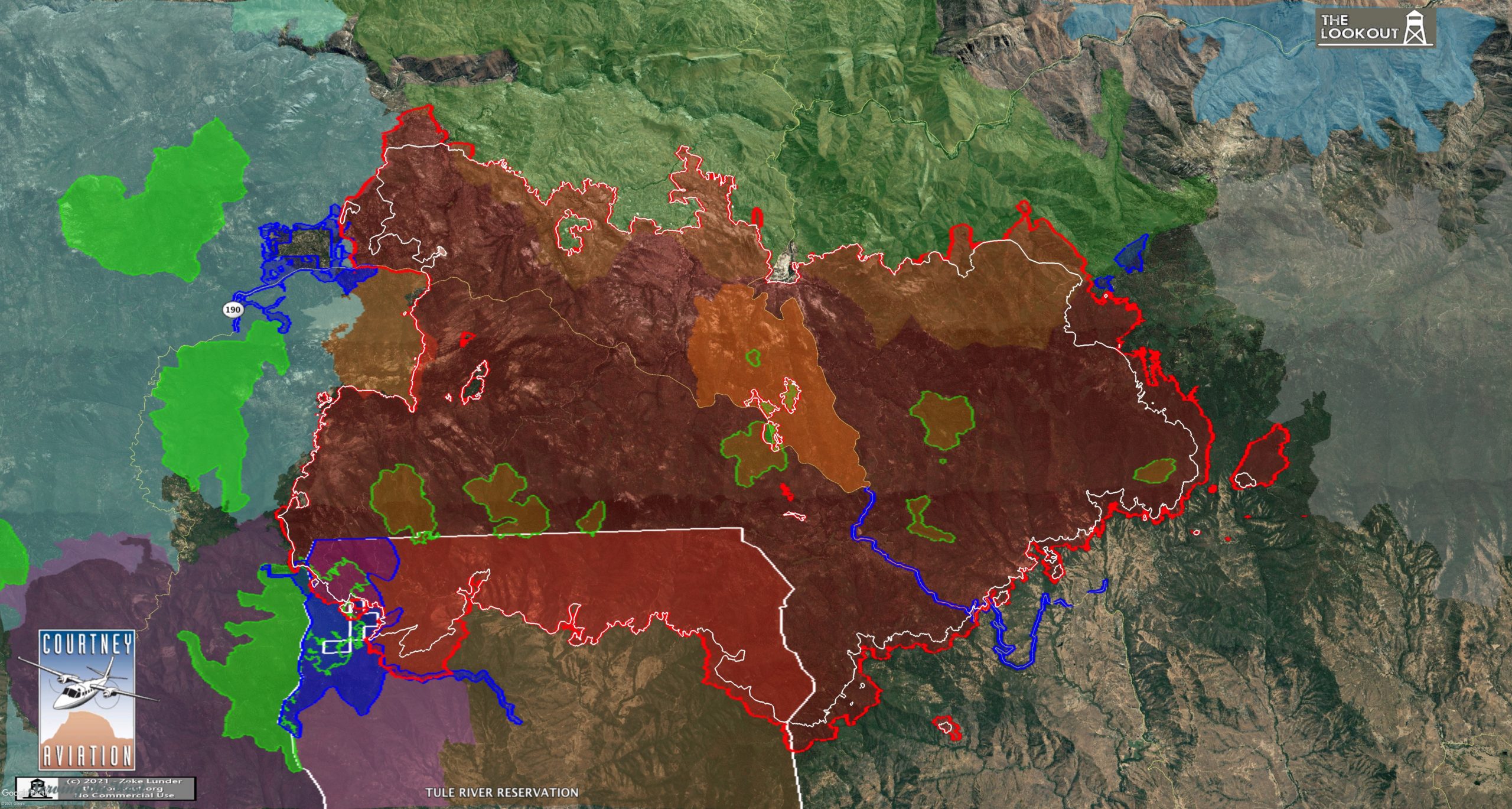 The fire was most active on the south and southeast sides of the fire, specifically in the Sugarloaf, California Hot Springs, and Pine Flat areas. Firefighters have reported some structures on the southern part of the fire have been damaged; the number and locations will be available as soon as it is safe for assessment teams to access the areas. The Sugarloaf and Pine Flat areas are the priority for firefighters working the night shift.

Below is the view looking northeast with California Hot Springs in the lower left and Sugarloaf Village in the lower right portion of the map. 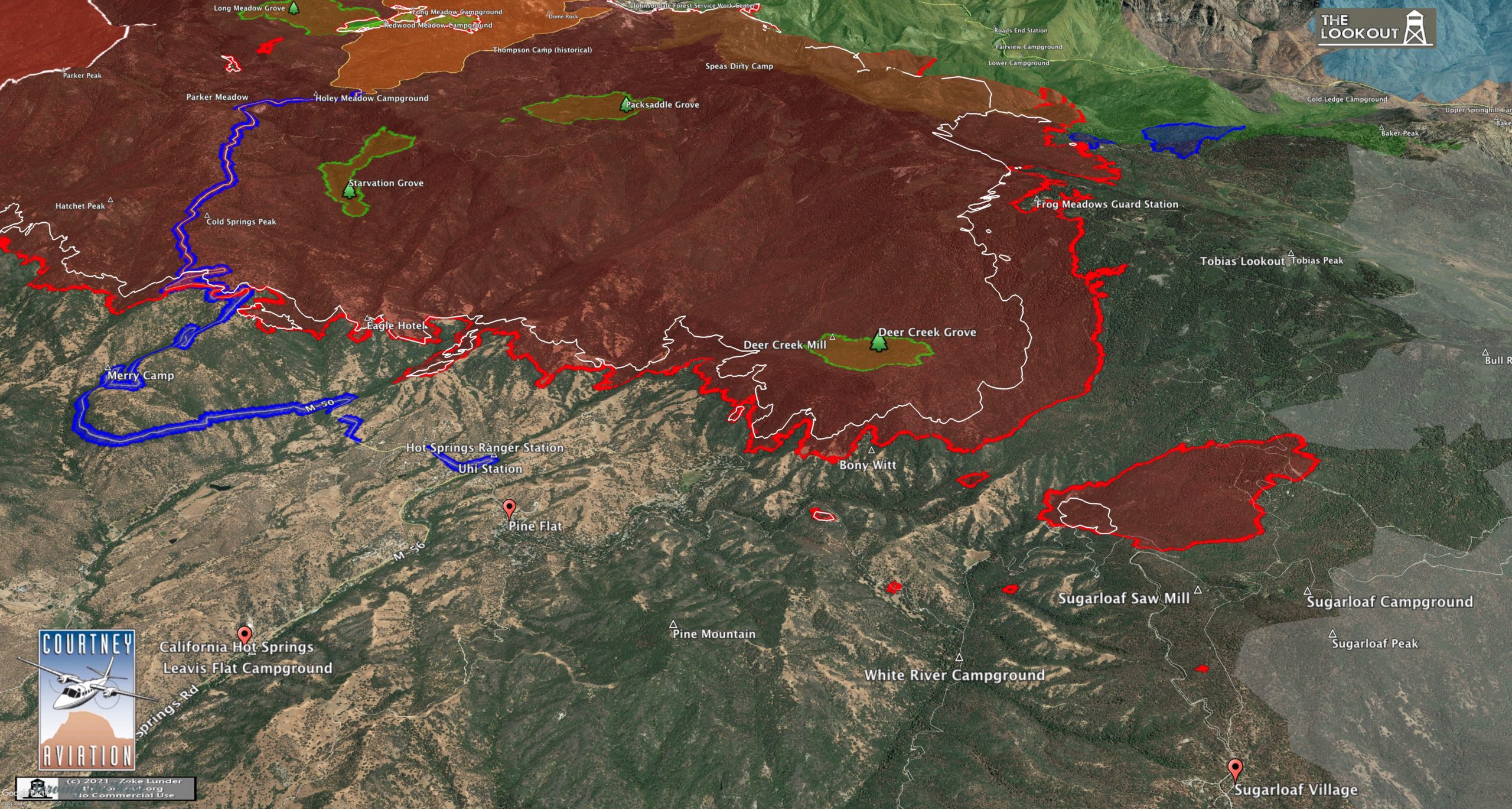 The fire was also active on the northeast side in the Peppermint area, and crews continue to improve defensible space around structures when and where it is feasible. They will remain in the Peppermint area tonight. Crews working on the north side near Camp Nelson today reported no issues. The fire made some runs westward in the Tule River Indian Reservation and crews are scouting the area for suitable places to construct contingency firelines.

Below is a map looking south toward Ponderosa and the Peppermint area. As I mentioned yesterday, the community of Pondarosa is surrounded by recent fire footprints and Rx prescribed fire. The past 24 hours growth brought the fire right up to Rx burns, the 2020 Castle Fire, the 2016 Slate FIre, and the 2002 McNally Fire footprint. Minimal to no growth into the interior of these footprints. 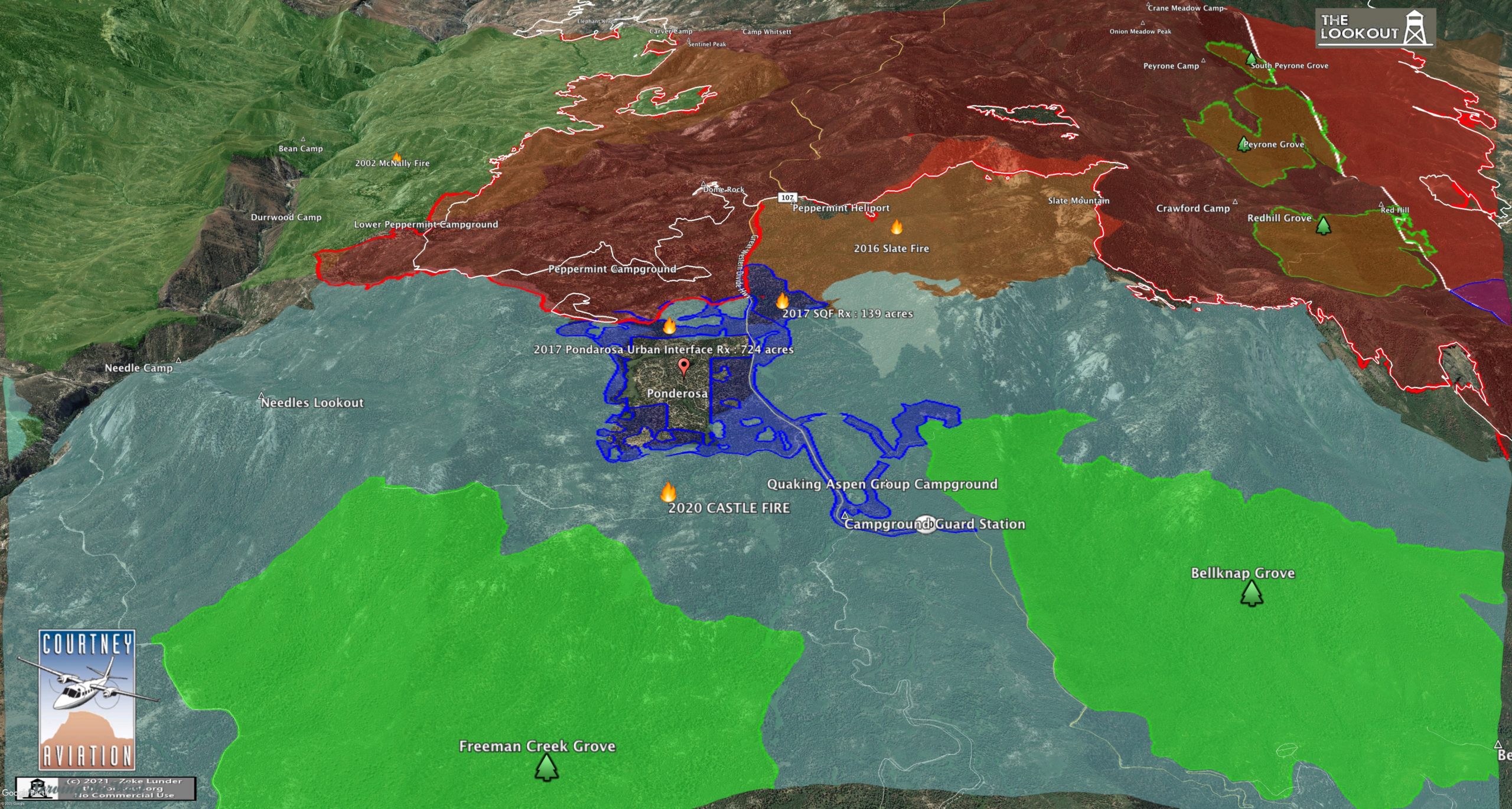 Firefighters involved in planning operations have requested additional resources, specifically to increase the robustness of the night shift. The reality is that other fires are also needing personnel and equipment, so the incident might not receive everything requested.

A dry cold front is expected to move into the area early to mid-week, bringing cooler, moister weather, but also stronger winds. At tonight’s briefing, the incident fire behavior analyst told fire managers and crews that the next couple days will tell us if the Cedar Fire burn scar to the south will have a moderating effect on current fire behavior.

A lot of effort has gone into constructing dozer lines around the communities of Pine Flat and California Hot Springs. Crews are using those dozer lines and actively working to protect those communities from the fire.

***September 26 at 7am, Commentary from Chuck Ervin

Below information is from a portable raws setup near Mtn 99 along the east bank of the Kern River. 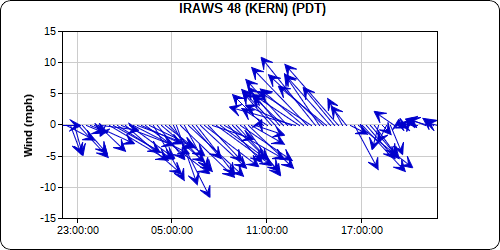 This shows usual diurnal winds along the kern.  Very strong upcanyon winds during the heat of the day.  This was seen as west or southwest winds along much of the west portion of the fire.  In combination with suppression efforts and slightly lower temperatures, fire spread was not nearly as severe as it was on Friday.

Uhl RAWS – Located in Pine Flat, closest and most representative of the Sugarloaf area towards the South East. 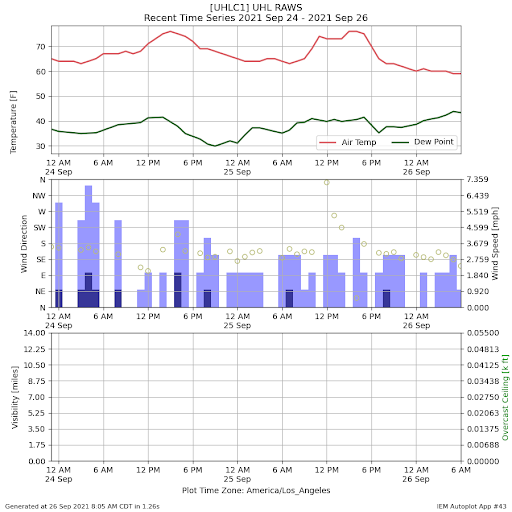 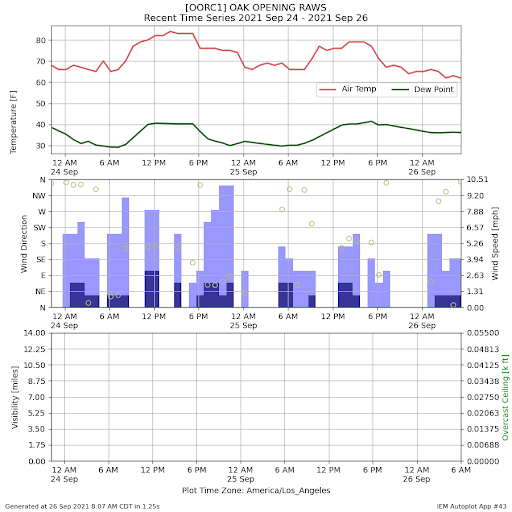 Oak Opening, this RAWS is north of the fire, at about 3500 feet elevation.  It’s my go to for the hottest and driest conditions.  I check this one against Uhl to make sure that Uhl isn’t artificially low due to fire suppression activity in the area (having water dropped on it). 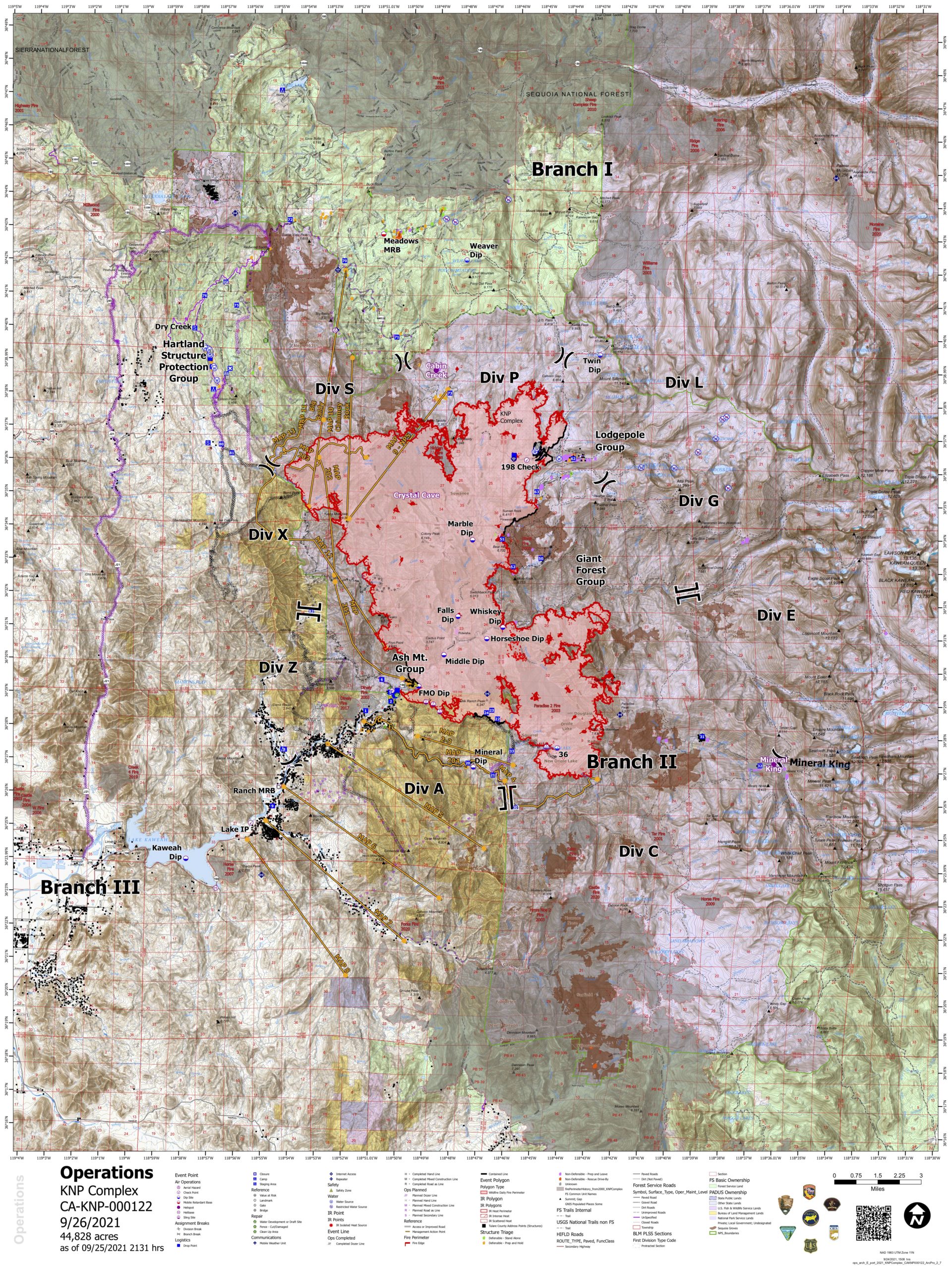 Overview of past 24 hour fire growth. MAP LAYERS: Giant Sequoia Groves are Shaded GREEN, Purple line is National Park boundary, and the light blue shaded area on the right is the 2020 Castle Fire footprint. The white line within the KNP Complex perimeter helps to discern roughly 24 hours of fire spread to the outer perimeter. 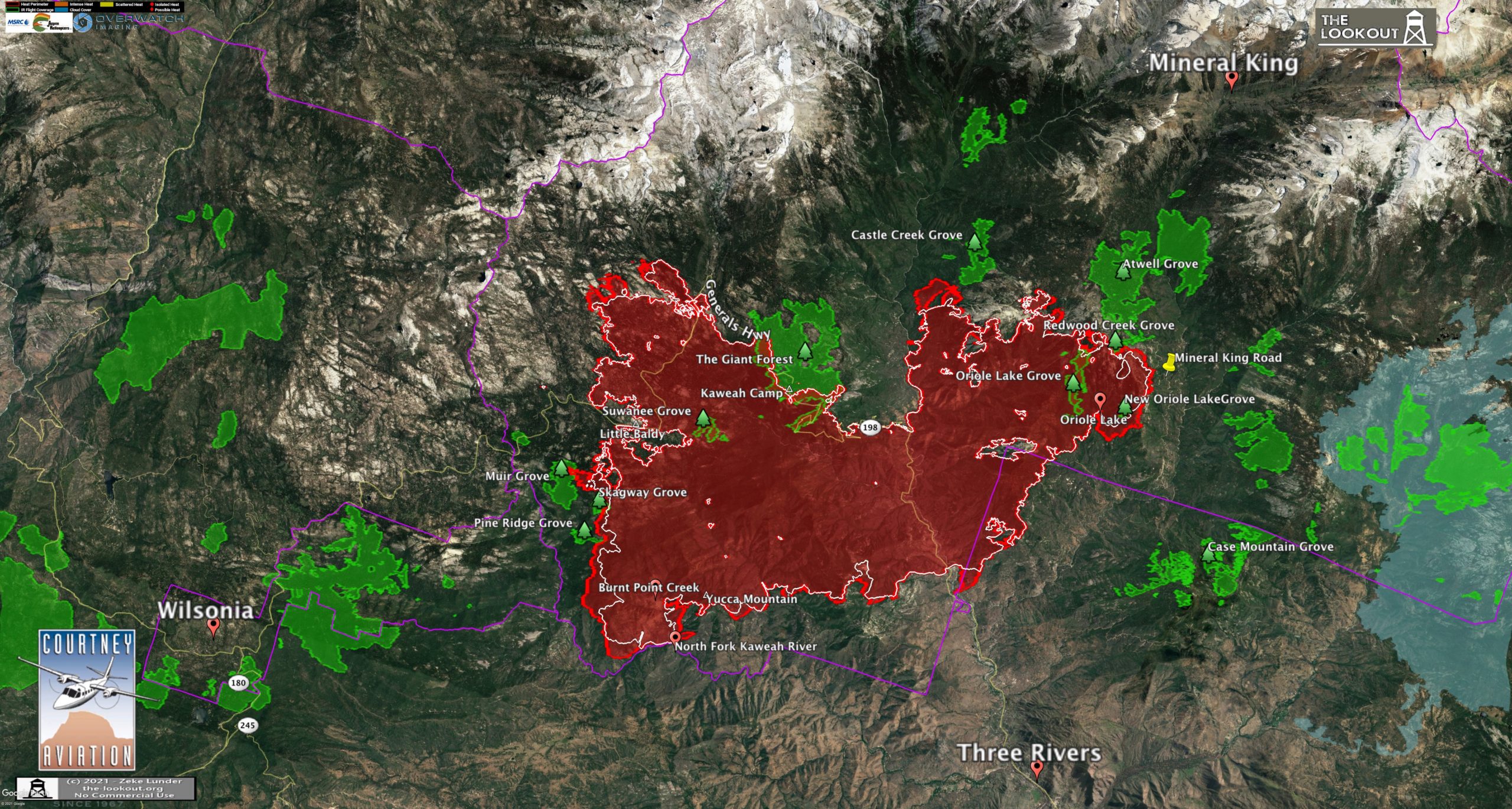 ***September 26 at 7am, Commentary from Chuck Ervin

Starting at Shepherds Saddle Road, little new fire in this area yesterday. The Colony Mill Road gives access to Maple Creek, and an avenue to bring suppression forces into the Ash Peaks area. At Burnt Creek, a finger of new activity up towards Yucca Mountain might indicate a burnout to tie up that portion of the fire.

Intense heat , but little spread indicated along the Northern Boundary on Pine Ridge.  Nearing the confluence of Dorst and the North Fork of the Kaweah, is Pine Ridge Grove.  IR Shows fire throughout the Grove this morning.   It may be assumed that this was a defensive firing operation overnight to protect the grove or it may be due to spotting spread that has been seen in the area over the previous days.  Watch for an update from the incident team this morning.

Looking North as fire moves into the Pine Ridge, Skagway, and the Muir sequoia groves. 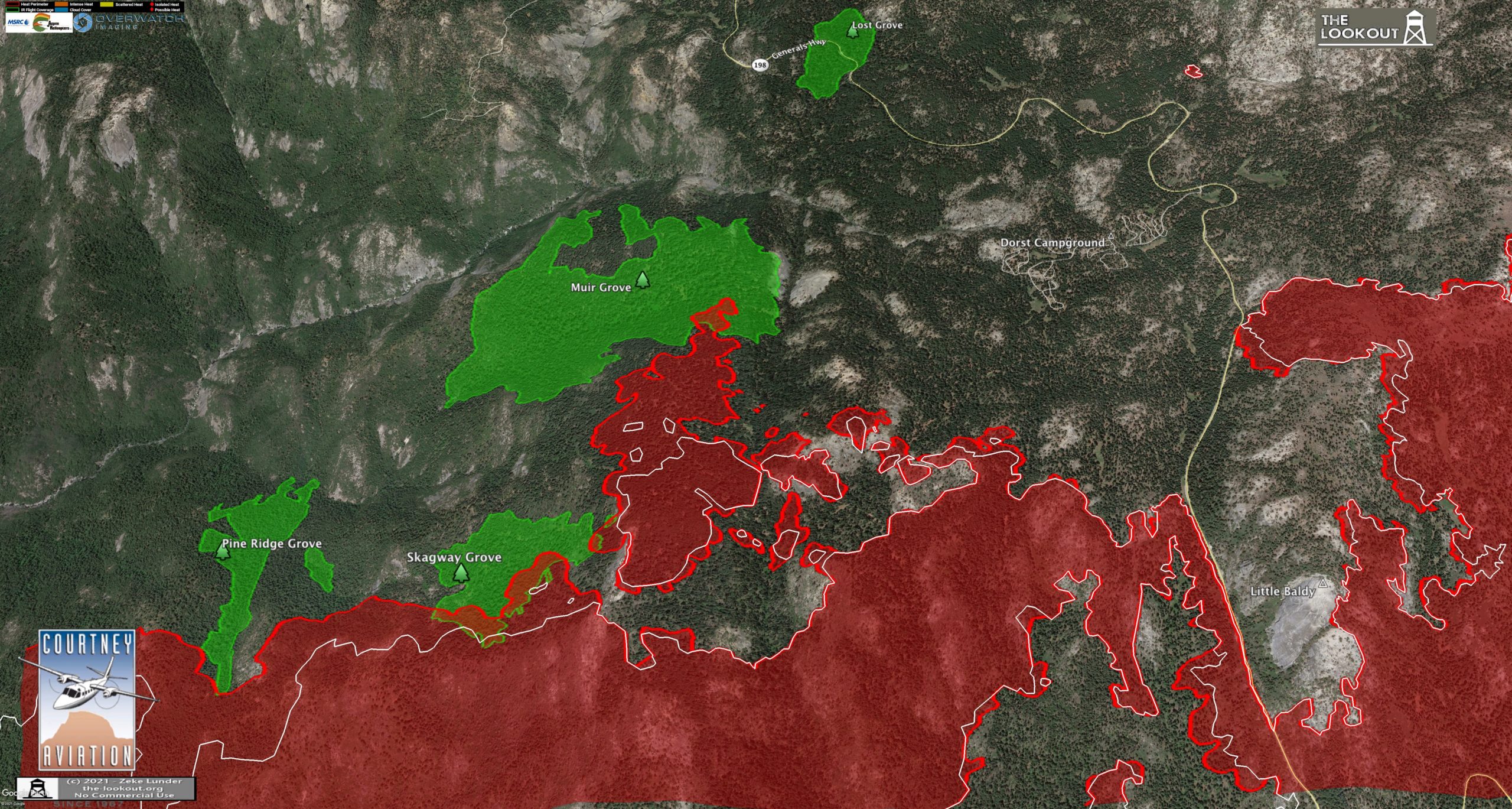 In the high country above Red Fir, fire spread continues in dispersed fuels in what appears to be a non threatening and ecologically sound way.  Little chance of this condition changing.

A bit different story south of the Middle Fork, where new spread was seen in the continuous fuels along the base of the Castle Rocks. A concern here could be the fire working its way through flashier low elevation fuels to Castle Creek, and then heading up slope into the Grove. This problem is several ridges and hopefully more than a couple days away. 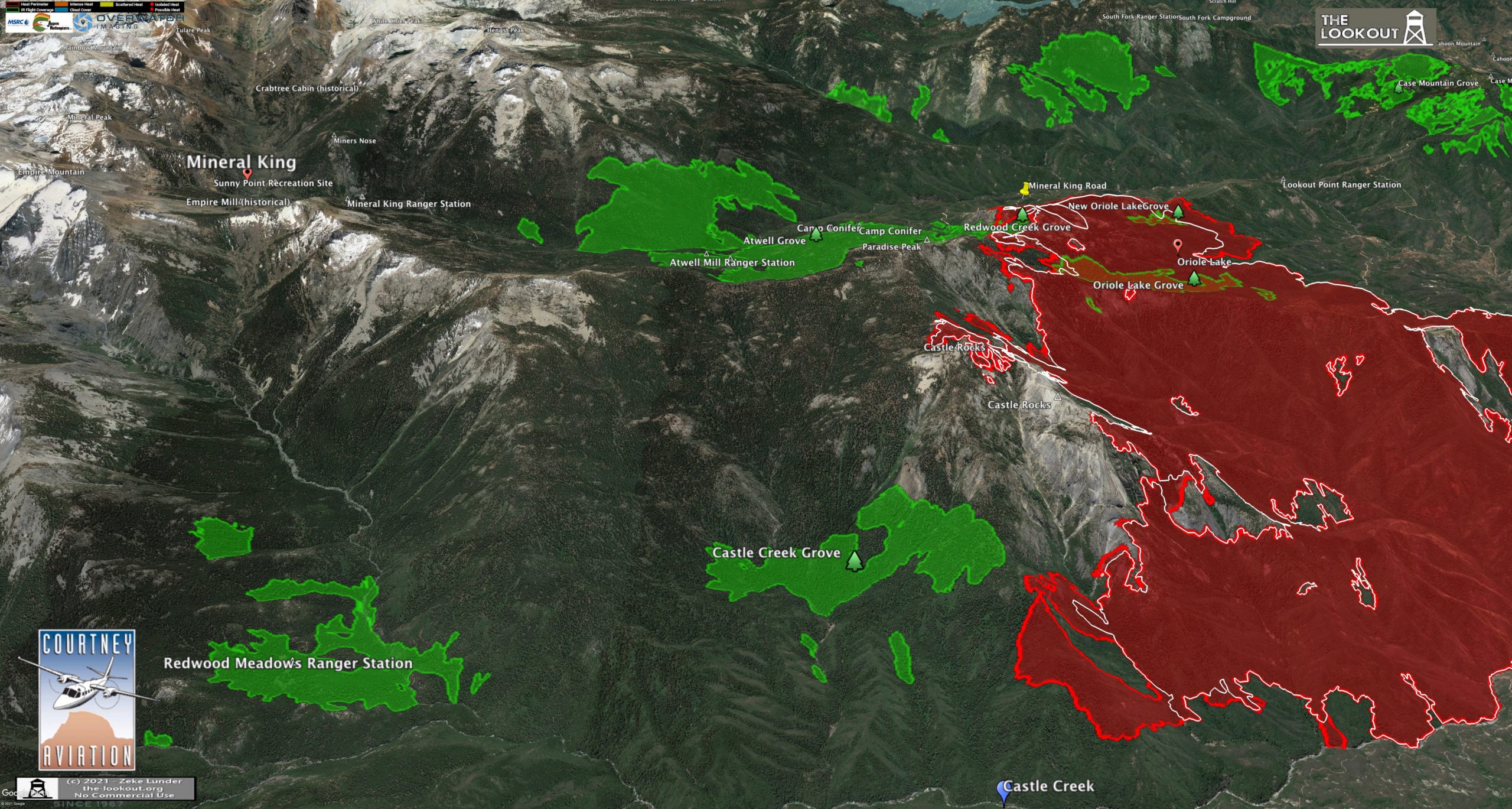 The slopover above Mineral King Road, South of Redwood Creek, was held. This area continues to burn actively up to the ridge and on the north side, to the west of Oriole Lake 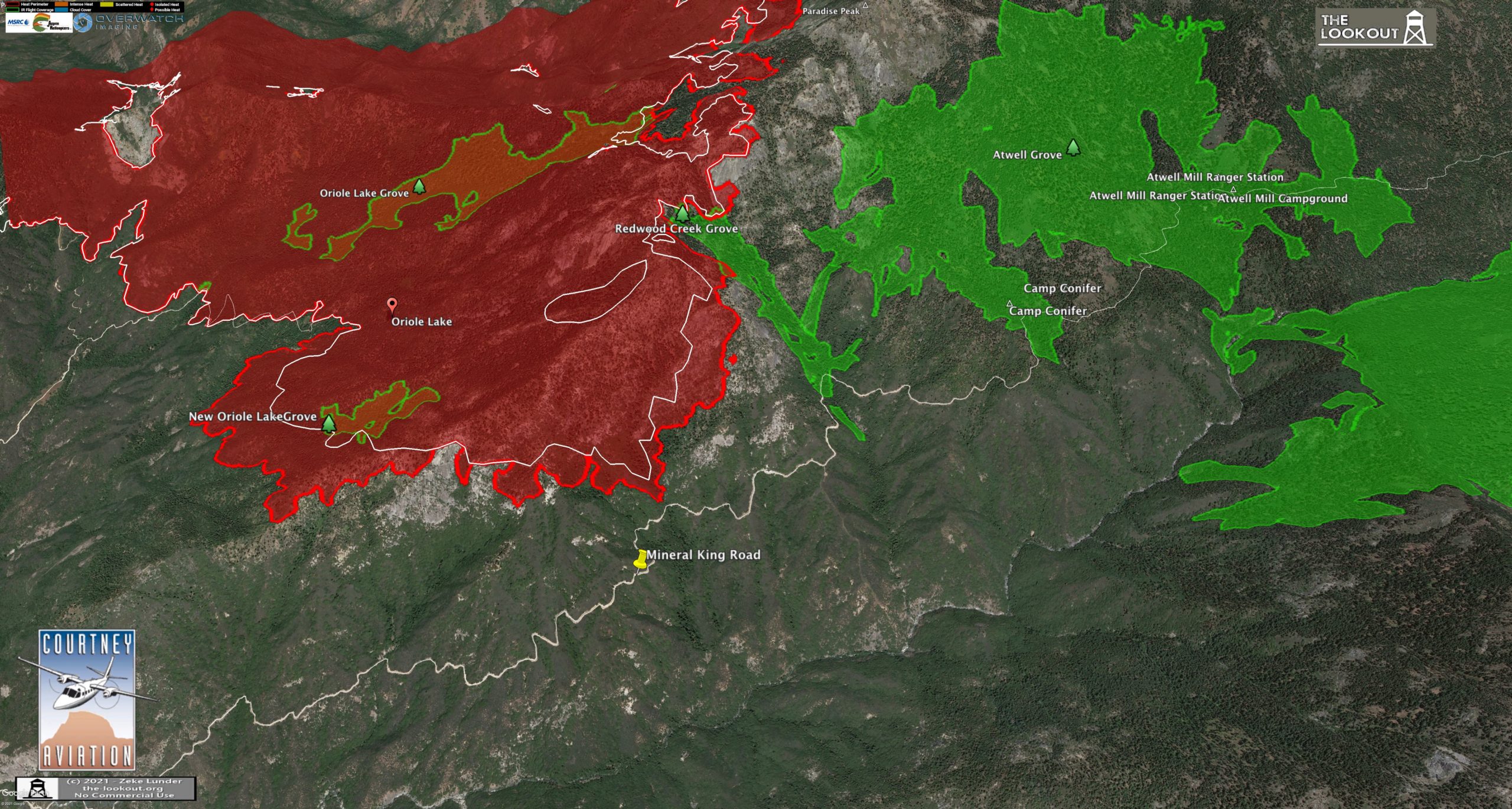 This brings us back to Paradise Ridge, where new fire activity from the Kaweah #1 Powerhouse up the road to the forebay and on to the Ridge appears to be a burnout to finish the line up towards Milk Ranch.