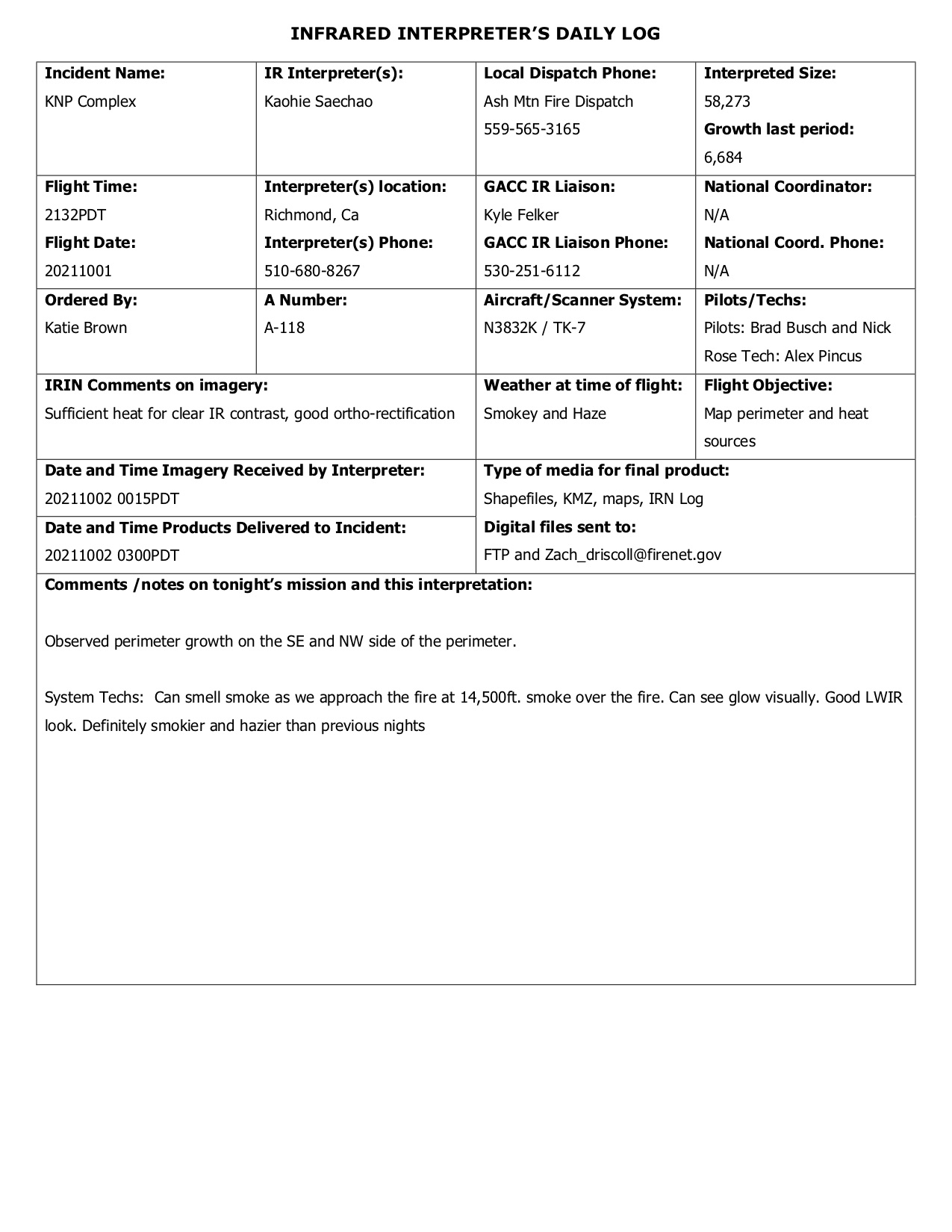 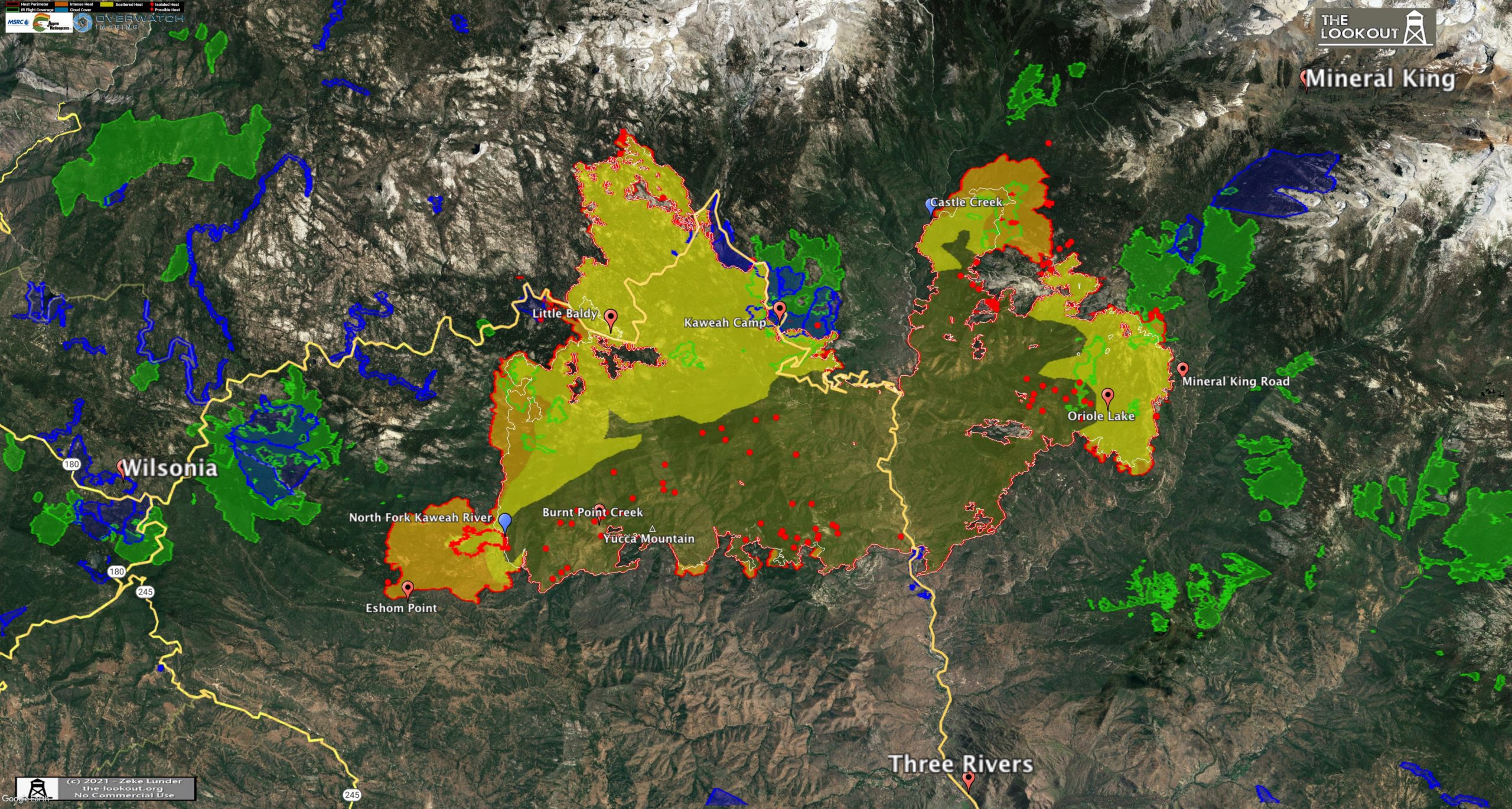 The spot fire on the northwest side continued to grow yesterday, puting it within arms reach of Big Baldy, Big Springs, and Redwood Mountain Groves. The Redwood Mountain grove has had a significant amount of Rx, however the bulk of the burns are 10-12 years old. Also of note, the fire has now completely passed through the Muir, Pine Ridge and Skagway Groves. 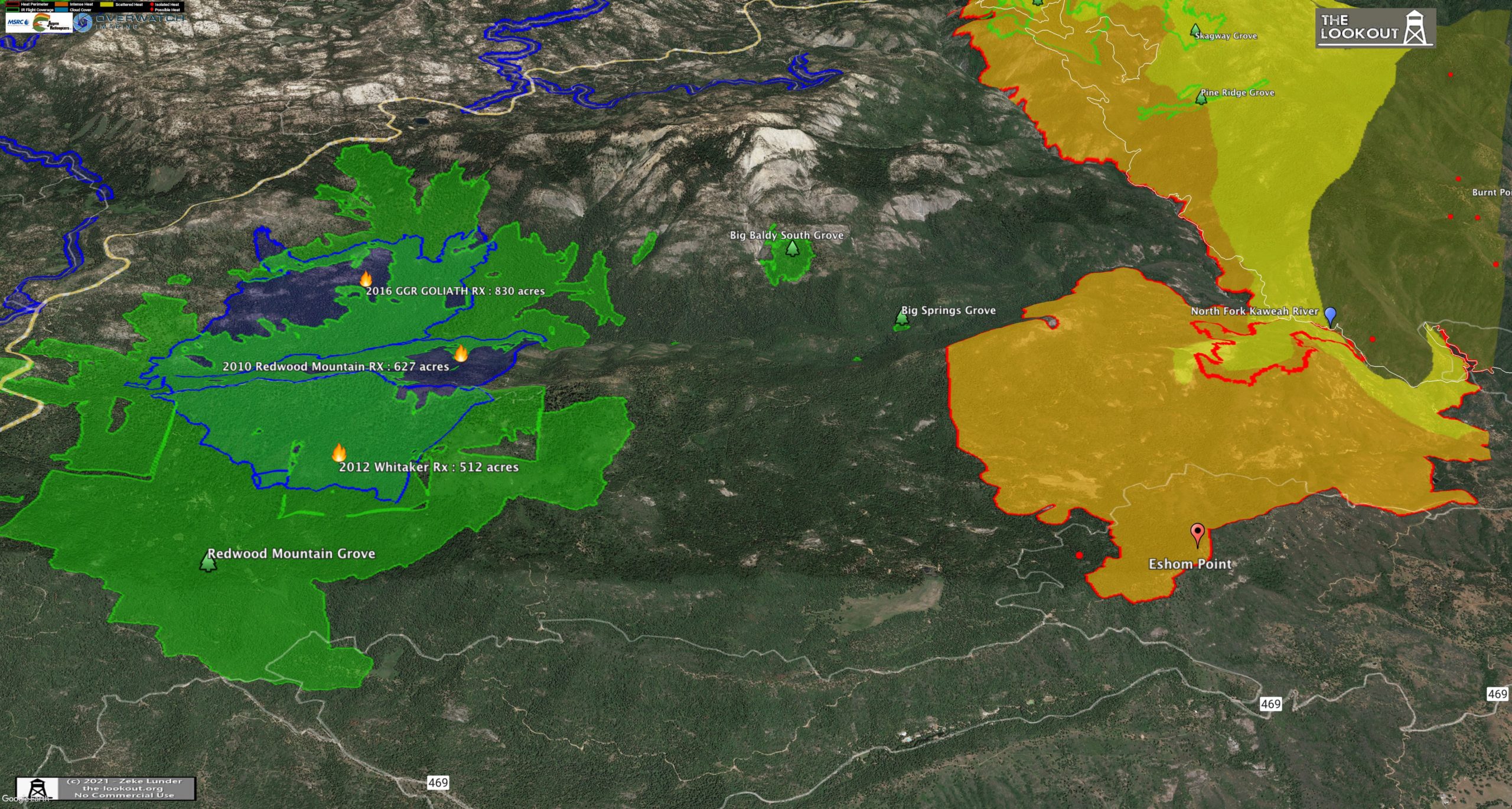 Over on the east side, the fire continued it’s progression in heavy timber through the Castle Creek Grove and as seen on the map below, it is actively burning and spotting south and east in the direction of the Atwell, and Redwood Meadow Groves. 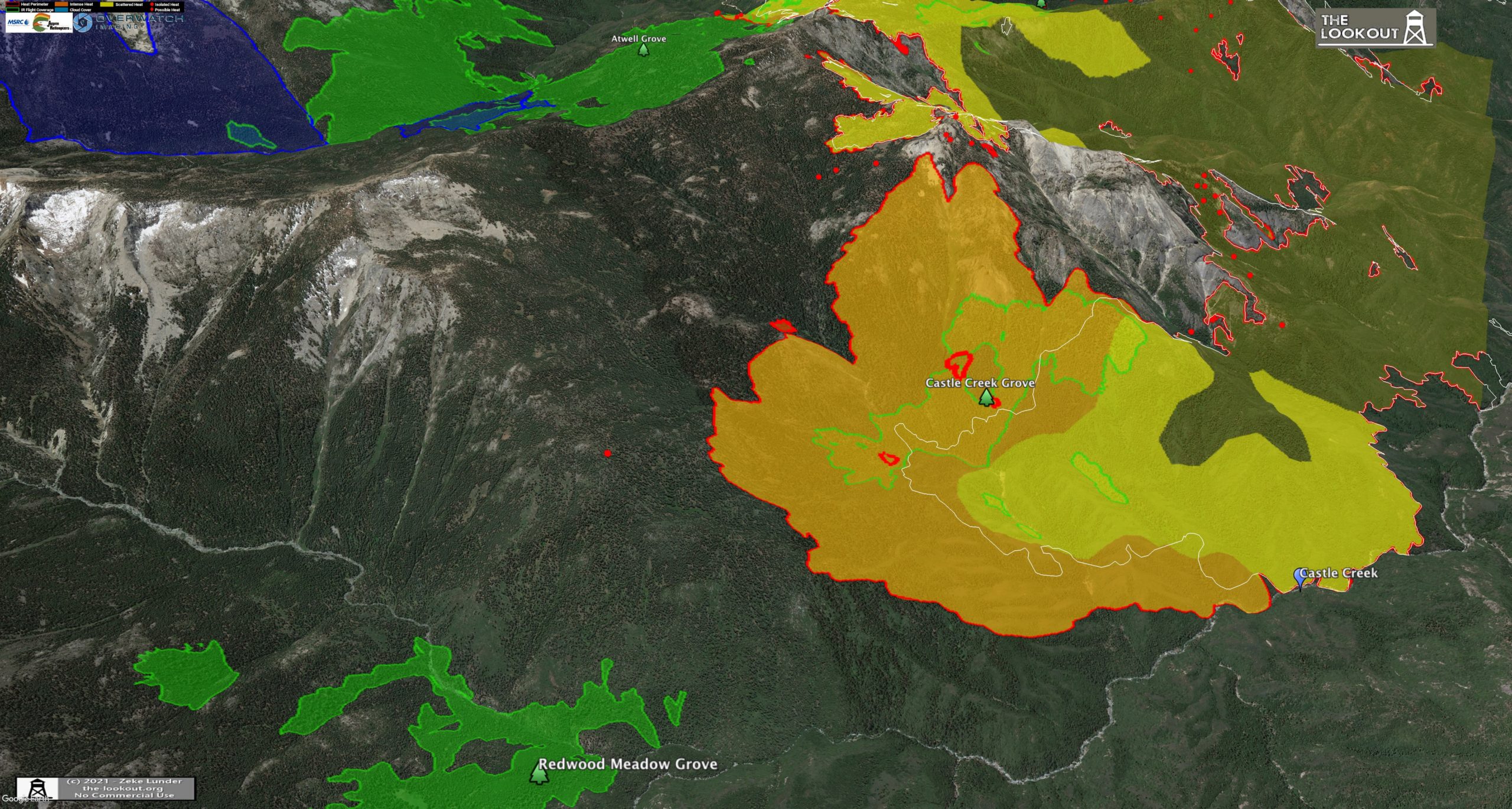 The fire is still holding north of Mineral King Road. Tactical firing operations along the Generals Highway and within the Redwood Mountain Grove have been initiated as expected; conditions are favorable and the operation is going well. Active fire behavior is being observed along the northeast flank where the fire crossed the North Fork Kaweah River yesterday, the fire continues to progress towards the west and northwest in that area. There is also active fire behavior along the eastern flank near the Castle Creek Grove area and the fire is progressing to the east. 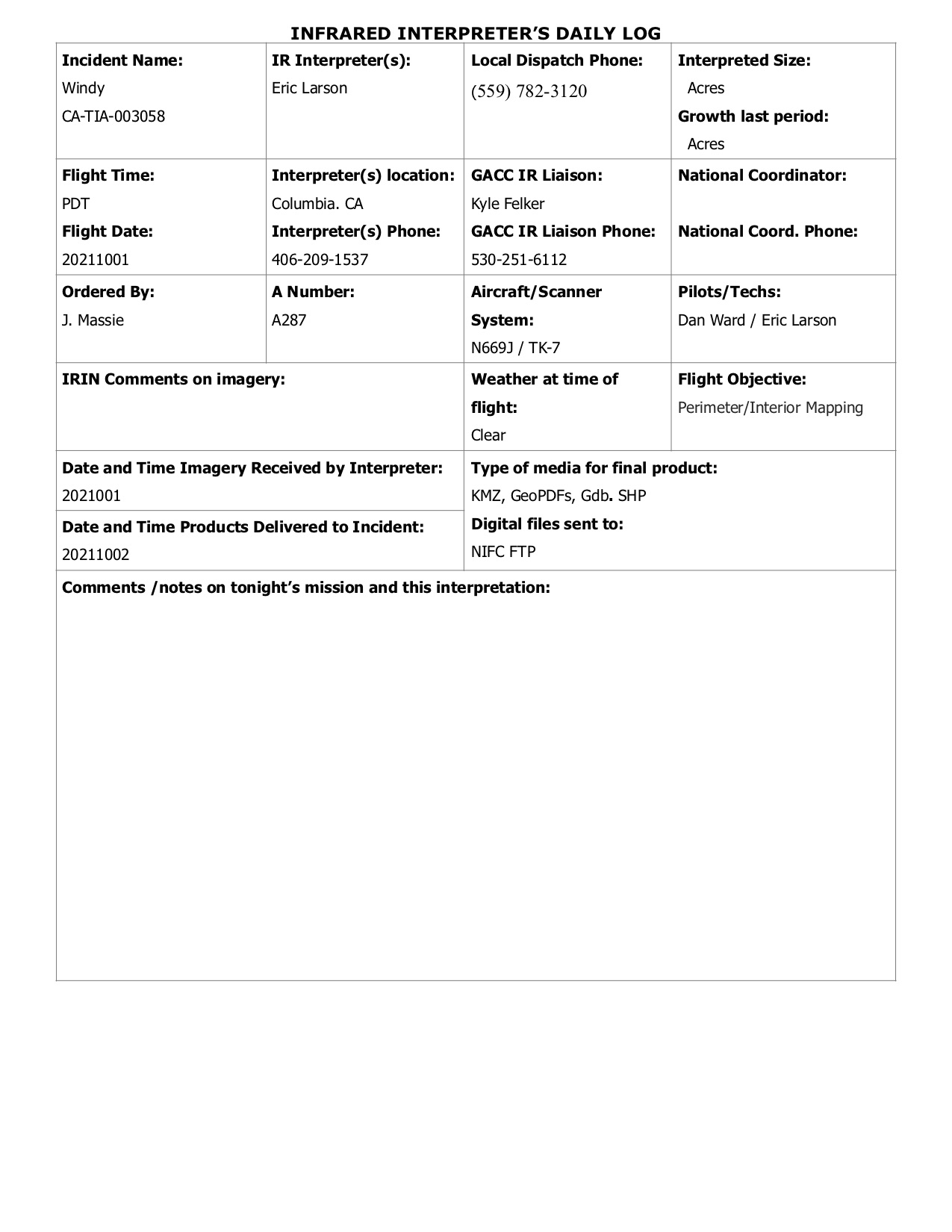 Overview of the fire looking east. Most of the fire remains within yesterday’s perimeter:

White perimeter line around the fire was yesterday’s fire perimeter. 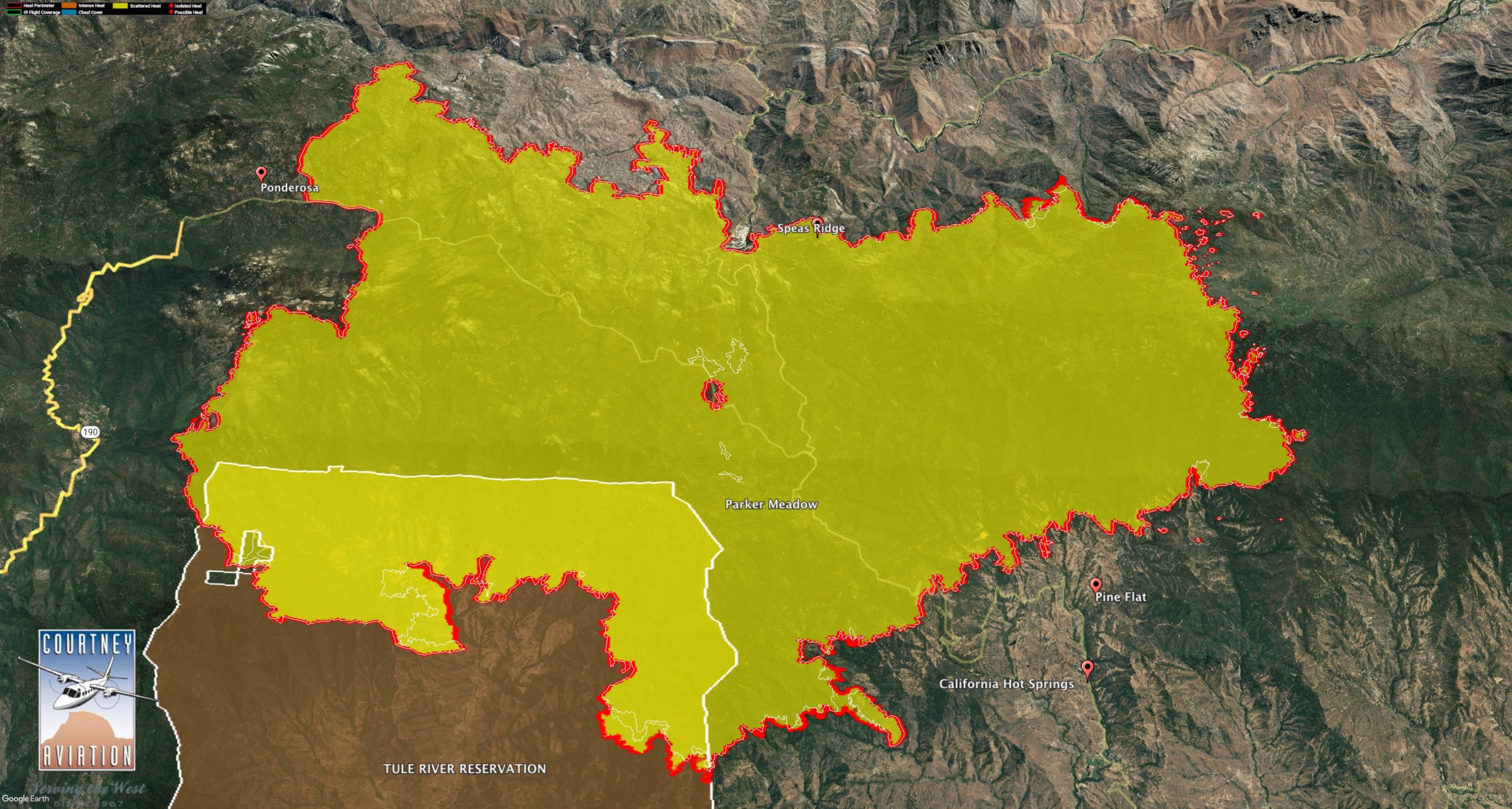 The Windy Fire is currently estimated to be 90,149 acres (a 345-acre increase from Friday morning’s reported acreage). Containment is 42 percent.
Around much of the fire perimeter—particularly the north, northeast, southwest, and northwest—crews are “mopping up and securing” the fireline. Mop-up is the time-consuming process of making the fire safe or reducing residual smoke by extinguishing or removing burning material near the firelines, felling snags, or moving logs so they won’t roll downhill. Hand crews are working their way methodically along the fireline—in some places going into the burned area 100-200 feet—looking for and extinguishing all residual heat. At times they use their bare hands to detect heat that isn’t producing visible smoke. While it may seem as though there have been few accomplishments to report in this evening recap lately, the crews involved in this critical phase of the fire-suppression mission are making incremental, yet measurable and significant strides each day.

The southeast, south, and western sides of the fire remain the most active. The Windy Fire and the KNP Complex to the north are both continually producing smoke, and without significant dispersal, it continues to contribute to poor air quality. Limited visibility somewhat hampered air operations, but helicopters were able to fly periodically throughout the day. They conducted water drops on the southeast portion of the fire, holding the fire west of the M99 corridor as there are still no good options for ground crews to access the fire’s edge directly.

From Baker Point westward along the southern perimeter to the contained fireline, crews expect to complete construction of the network of direct handline by the end of the shift tonight. On the west side of the fire, they are still constructing handline in an effort to prevent the fire from spreading further westward. In the Tule River Indian Reservation, where the fire continues to advance slowly toward containment features, crews are preparing road systems that have been identified as good locations from which to conduct a strategic firing operation, possibly a couple days from now.
The fire-behavior analyst reports that with the prolonged period of dry, warm weather the area is experiencing, everything that is on fire will continue to burn and be completely consumed. If firefighters can keep the fire mostly within its current footprint—either through direct suppression action or with aircraft—the vegetation that is burning will lose its energy and ability to project that energy in the future. The intense heat detected during the overnight infrared flight a couple nights ago is steadily diminishing.