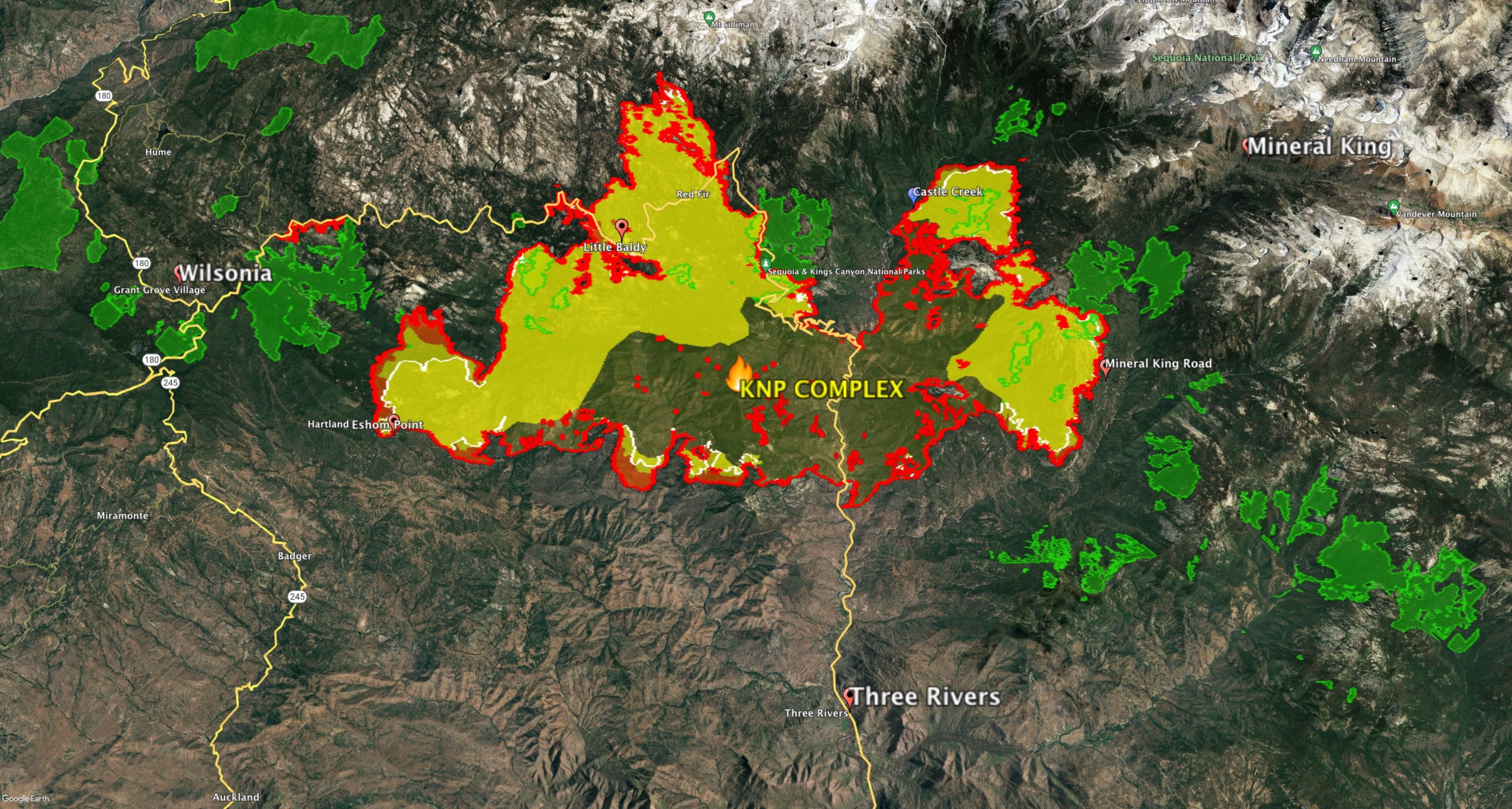 The fire passed through the Big Springs grove and entered the Big Baldy Grove. Looks like things are on track to potentially reach the Redwood Mountain grove, which has had a significant amount of Rx. The bulk of the burns in this grove are 10-12 years old, so it will be interesting to see what kinds of effects we’ll see if it does reach the grove. Looking at the map, you’ll see red isolated heat dots in the Redwood Creek Grove, so crews are in there putting down fire in advance and prepping the grove. Also of note, the fire has now completely passed through the Muir, Pine Ridge and Skagway Groves. 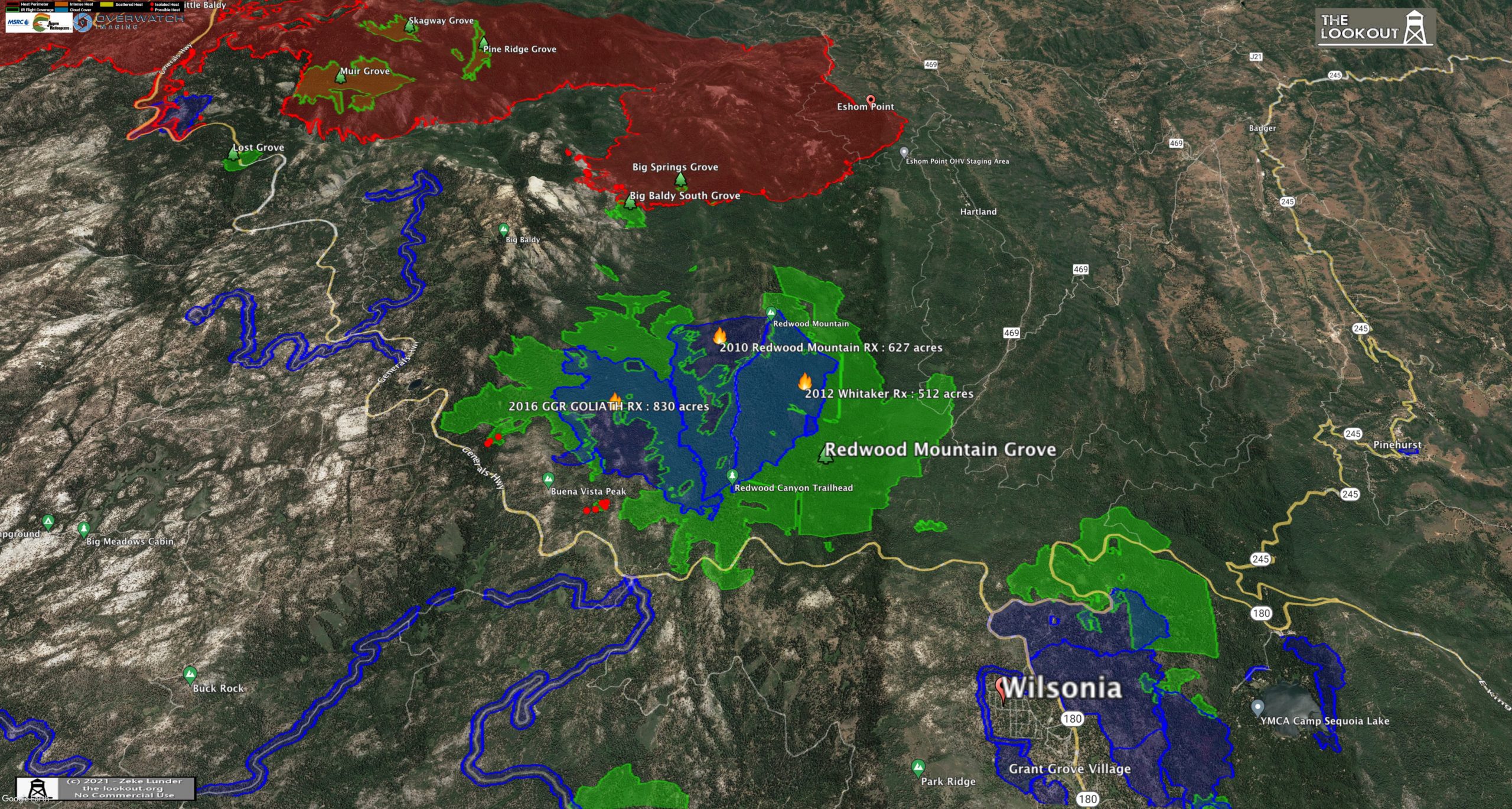 *** 2pm on October 2 ~ Sequoia and Kings Canyon National Parks KNP Complex Facebook Update
Active fire behavior is being observed again in the northwest where the fire crossed the North Fork Kaweah River. The fire continues to progress to the north and west in this area. The fire is still holding to the north of Mineral King Road. Due to inaccessibility, firefighters are monitoring fire activity in the Castle Creek Grove area as the fire progresses to the east. Proactive tactical firing operations are occurring in the groves south of Redwood Mountain to reinforce containment lines and protect the groves. Tactical firing operations are also underway west of the Generals Highway along the northern perimeter to strengthen contingency lines. 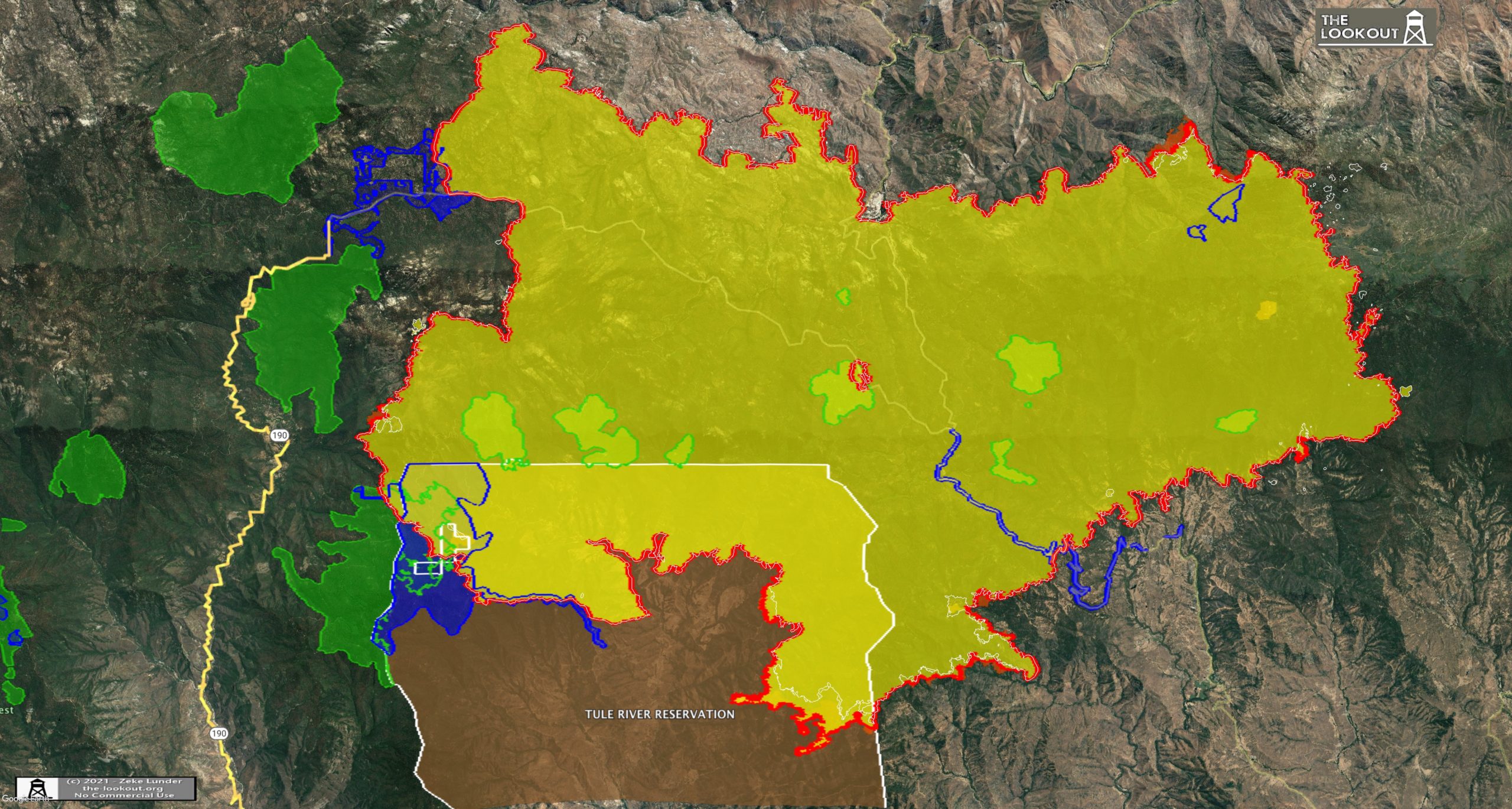 The Windy Fire is currently estimated to be 91,963 acres (a 726-acre increase from Saturday morning’s reported acreage). Containment is 52 percent.
On the north side of the fire, south of Camp Nelson, some unburned vegetation in the fire’s interior started to burn actively today; however, it did not pose a threat to containment lines. All firelines around the perimeter that are considered contained are holding.
On the east side of the fire, crews have been able to suppress the fire directly from Johnsondale southward. They are confident they will get to Speas Ridge before dropping into Flynn Canyon where direct suppression-tactics will no longer be feasible. South of Flynn Canyon, helicopters are being used to drop water on the fire’s edge to halt or slow its progression eastward toward the Kern River. On the southeastern corner west of Baker Point, the individual spot fires are all contained.
Along the portion of uncontained fireline on the south side, crews are finding and extinguishing numerous hotspots and expect to work in that area for a couple more days before achieving containment. On the southwest side of the fire this morning near White River, the fire crossed—or “slopped over”—the control line and grew to about two acres before crews contained it and connected it back into the primary control lines.
On the west side, the fire is still actively advancing westward, but it is generally moving downslope and not exhibiting extreme behavior. On three dominant ridgelines in the Tule River Indian Reservation, crews initiated a strategic firing operation to encourage the fire to progress evenly as it comes down to the ridgelines.
Very dry daytime and nighttime conditions are expected to persist into early next week. Stronger winds could materialize late tonight, with gusts up to 20 miles per hour possible. Tomorrow, the Kern River drainage will be very prone to strong winds, with gusts 25–30 miles per hour anticipated; elsewhere, gusts will be up to 20 miles per hour. The result will be several hours tomorrow of near-critical to critical fire weather conditions along the Kern River valley and adjacent slopes.