Good evening. With a half million-plus acre fire, there is always something to report! Most fire we are looking at tonight is in locations that have been active for the past week, so let’s start the check-in.

Today we got data from a Sentinel satellite orbit. This is like Christmas for map geeks. Here is what our fire looked like at noon. Blue areas still have some live trees in them, so it’s not all moonscape out there. 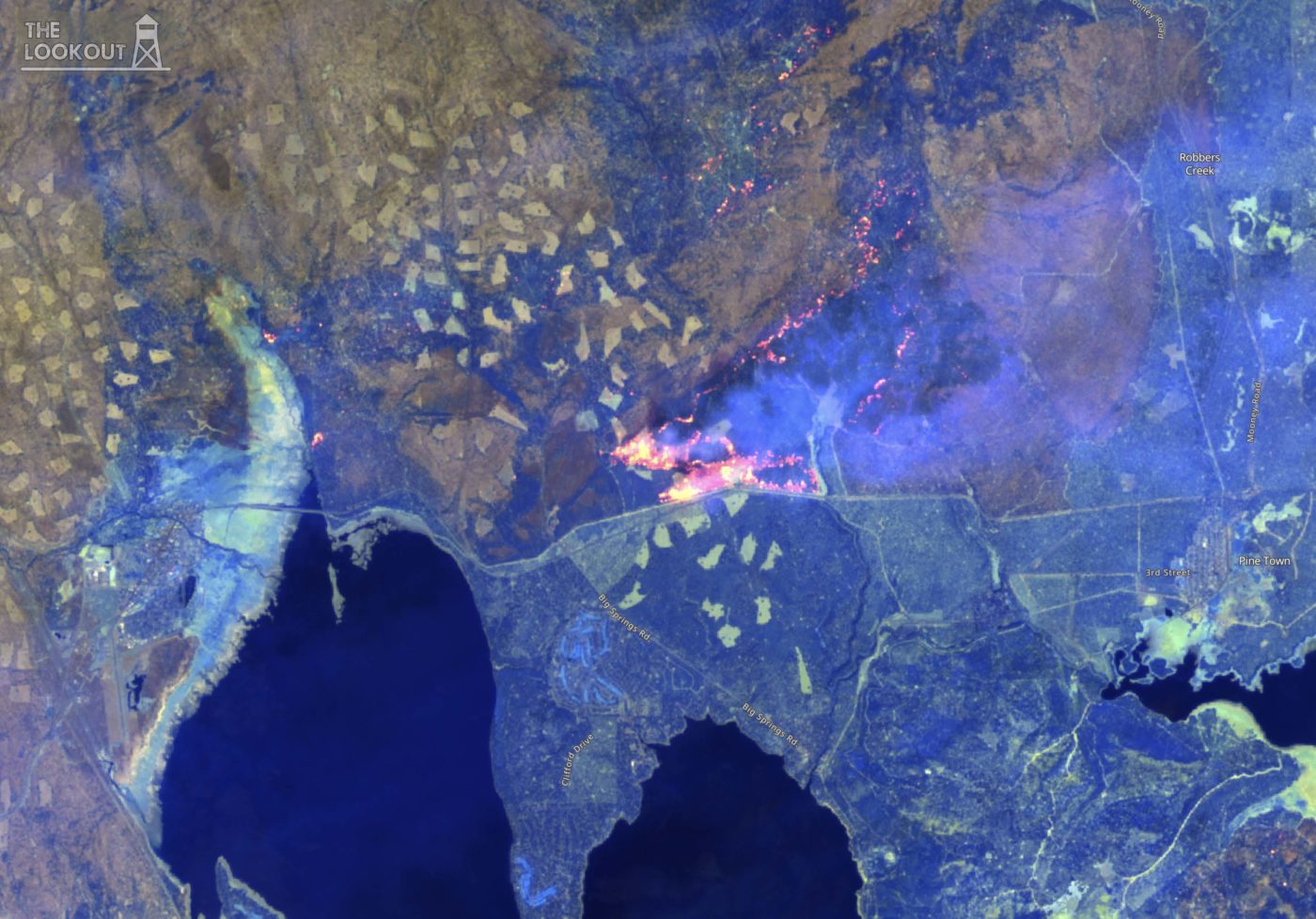 The biggest development around Chester, Westwood and Lake Almanor is a new firing operation along Highway 36. Yesterday’s winds blew the firing from the previous firing east of Rock Creek, back northeast into the previously areas burned north of the Westwood Dump. The entire area of the previous firing operation is looking pretty cold on the IR today. The new firing extends from New Chester Dump Road to Rock Creek. Once this cools off, it will basically shut the door on the interior heat south of Swain Mountain that has been looming over the entire north side of the Almanor Basin for the past 10 days. If they can hold this new firing north of Highway 36 through the incoming northeast winds, it will be a huge win and major step toward repopulating our communities here. 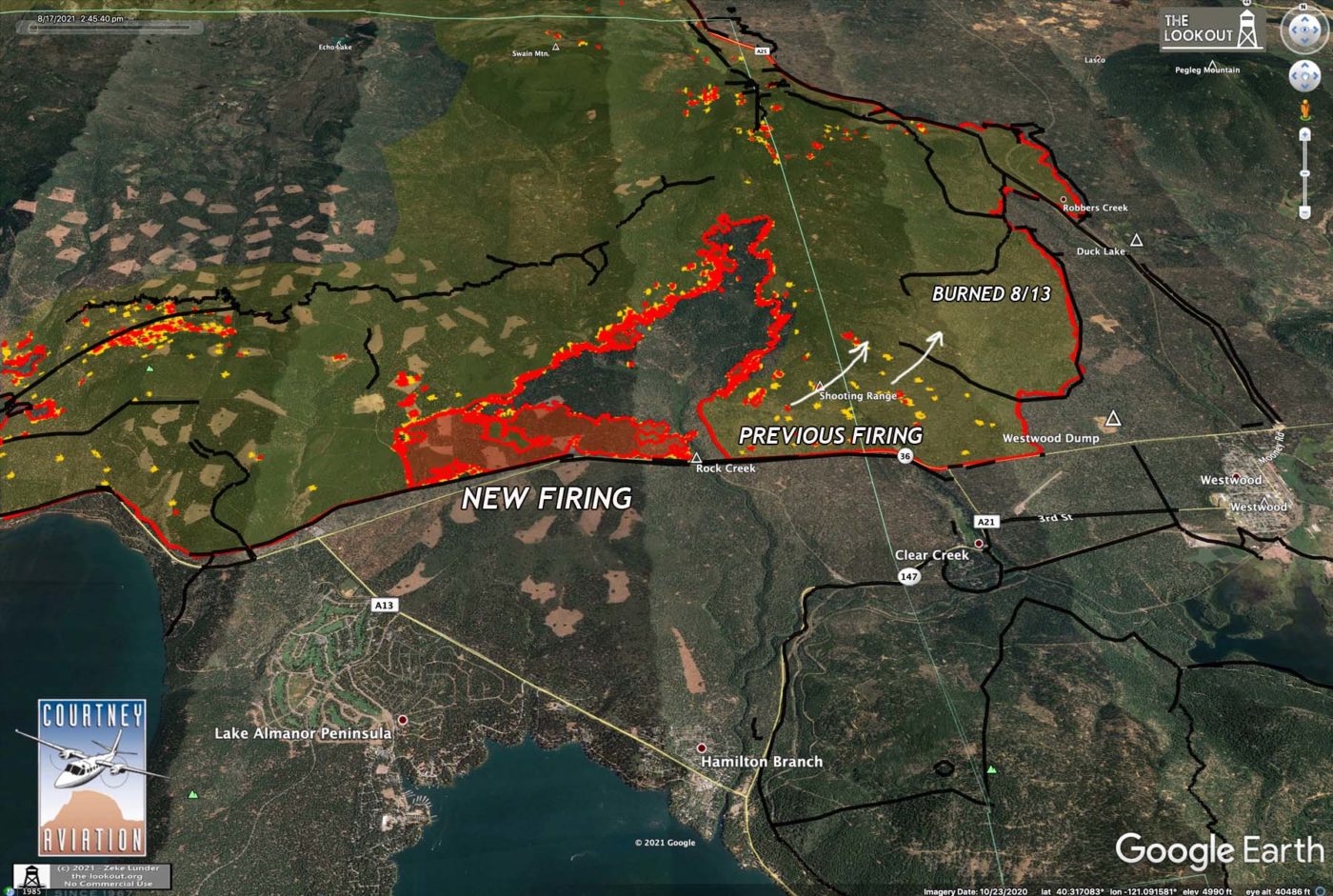 And in the ‘not all terrible news’ department, there are some large patches of forest (dark blue) north of Westwood that still look like they have some green trees on them. 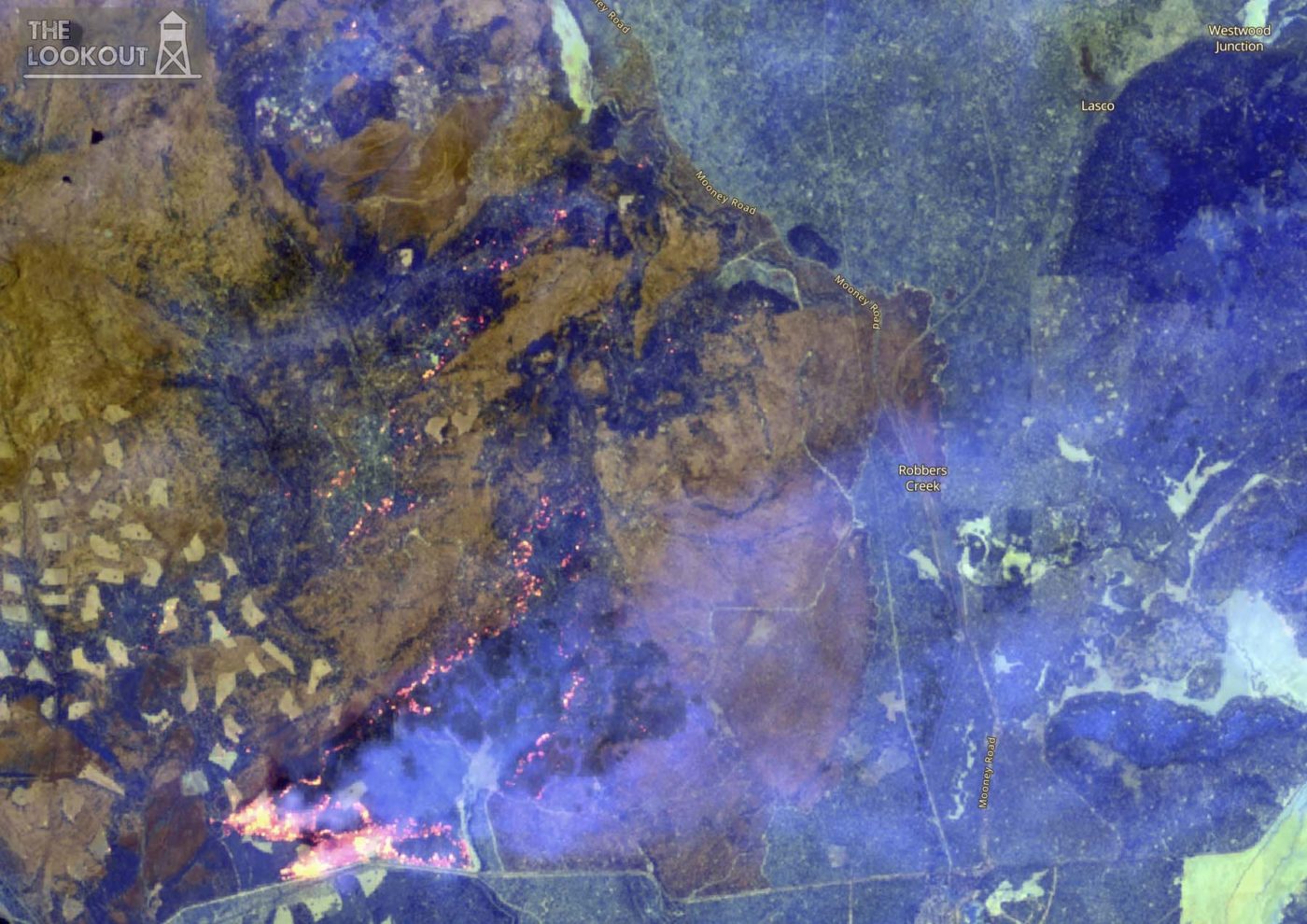 Firing and new spread on the South side of Mountain Meadows Reservoir/Walker Lake continues to cool down. 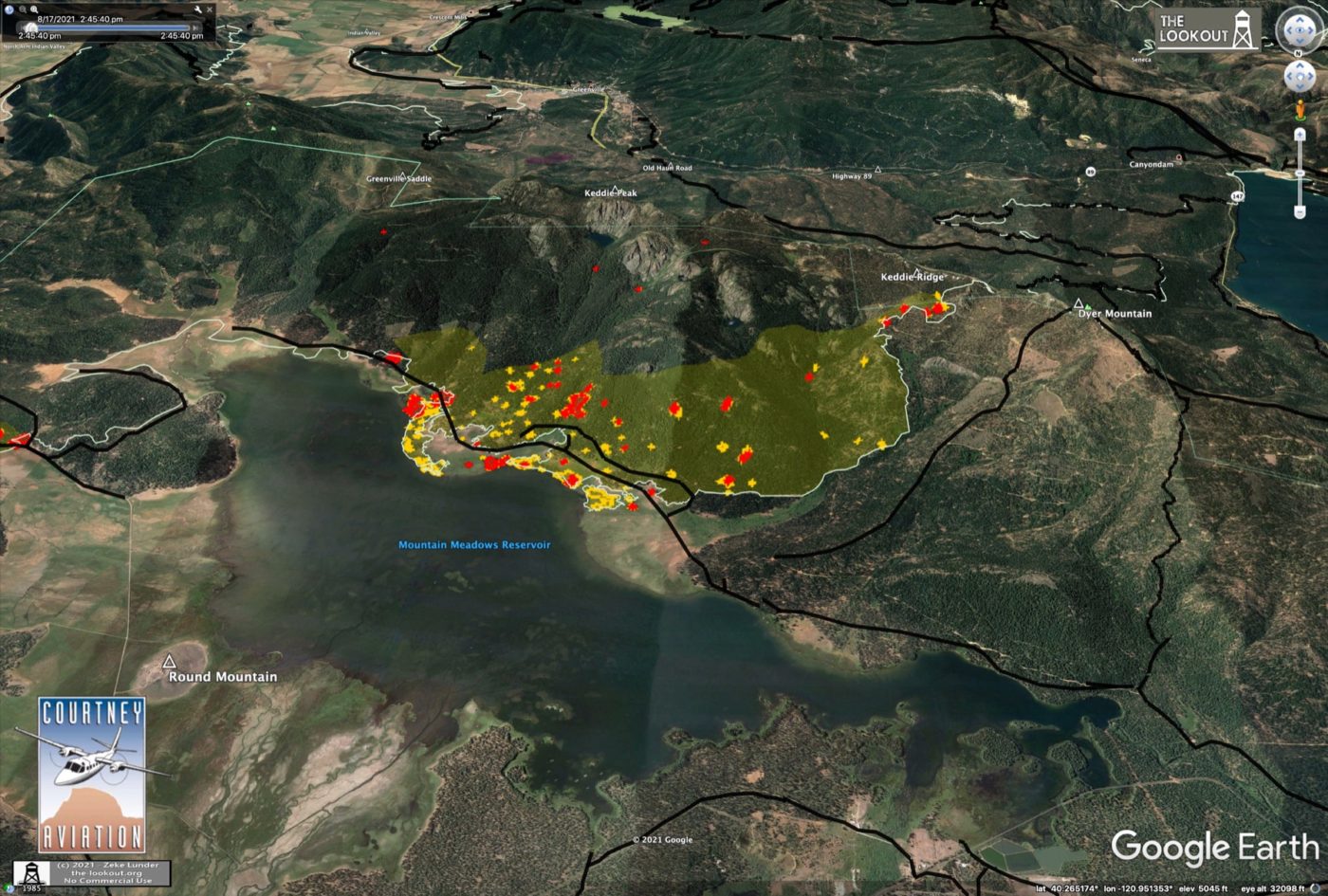 Northeast of Mountain Meadows and north of Coyote Peak, there is still a lot of active fire flanking toward Highway 36 and Fredonyer Pass. I’m not informed on the plan here, and am unsure if any of this is new firing ops. The forecast of northeast winds could do some strange things with this part of the fire. Highway 36 and the Susan River roughly mark the divide between the Sierra Nevada and Cascade Mountain Ranges, and Susanville is in the Basin and Range province, so we have three continental scale landforms coming together right here, each with their own winds and weather. Last year on the Hog Fire, we saw all kinds of very bizarre and unpredictable things happen with the weather and fire behavior, so any major change in weather patterns makes this place go kind of crazy. It’s not over until it’s over here, but at least we have the 2020 Hog and Sheep burns to keep things somewhat on the rails here. 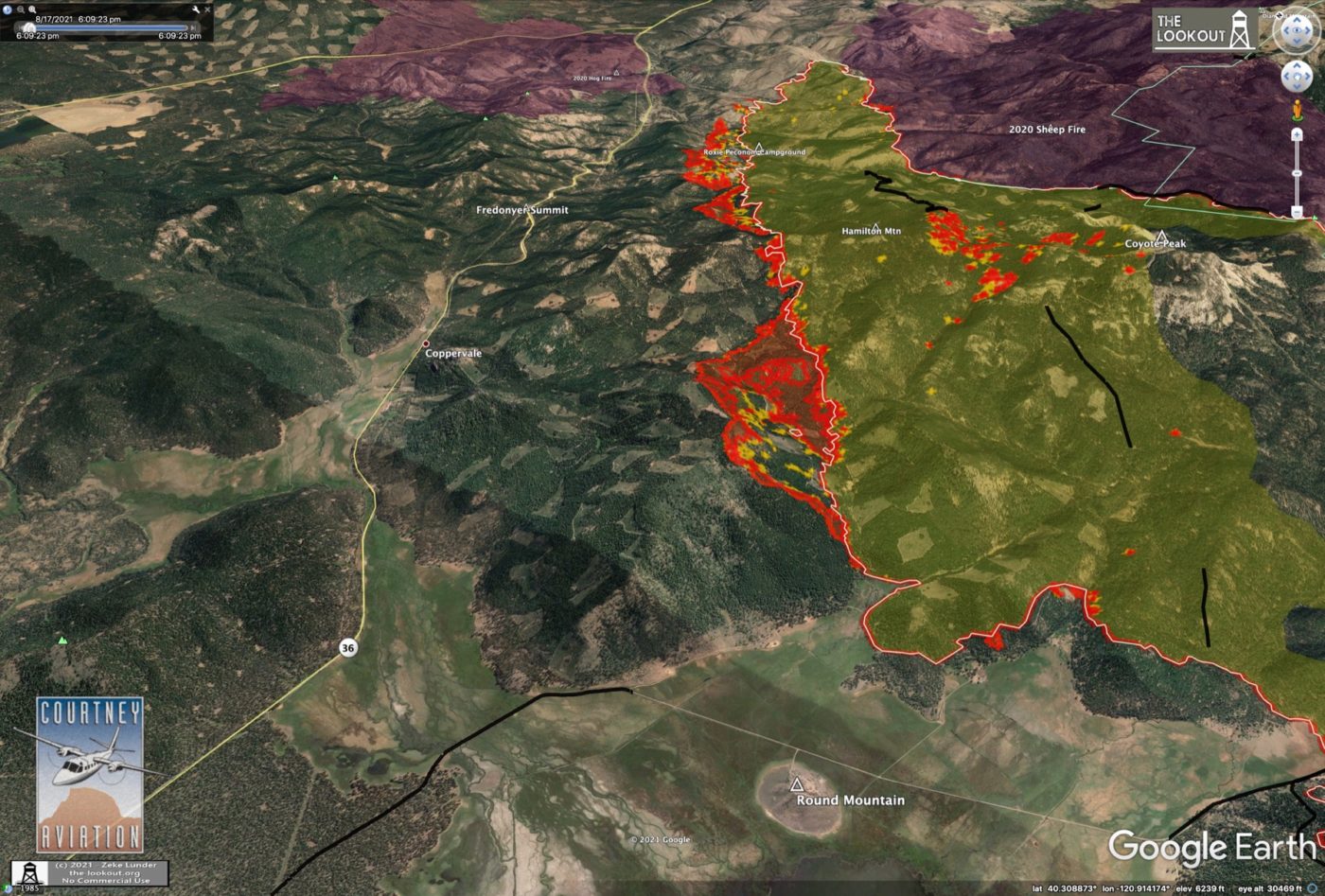 Much of the narrow, wind-driven burn yesterday (to the right of today’s flames) on Fredonyer Pass was high severity. Areas where it burned with less wind over the previous week may have surviving trees. 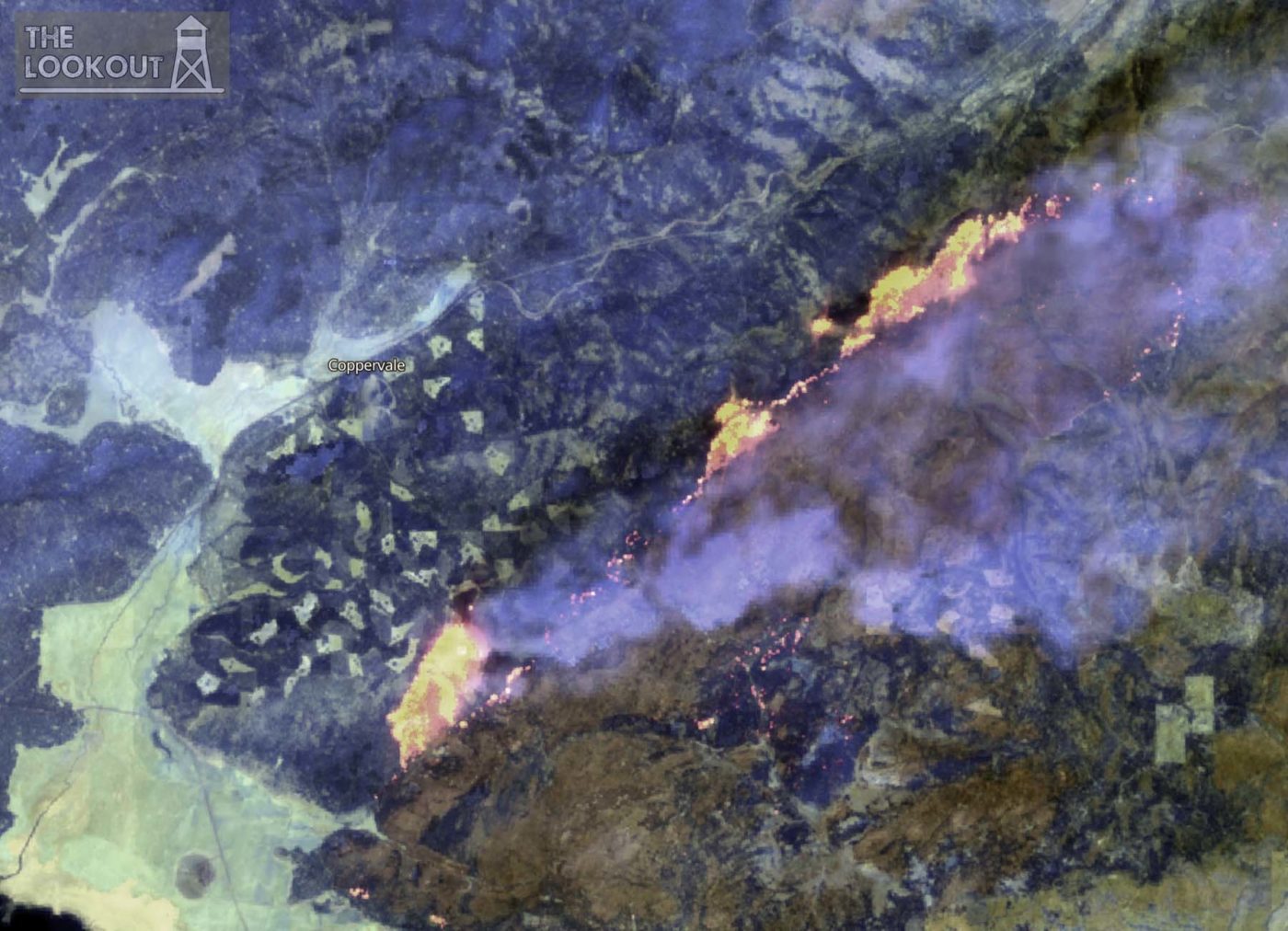 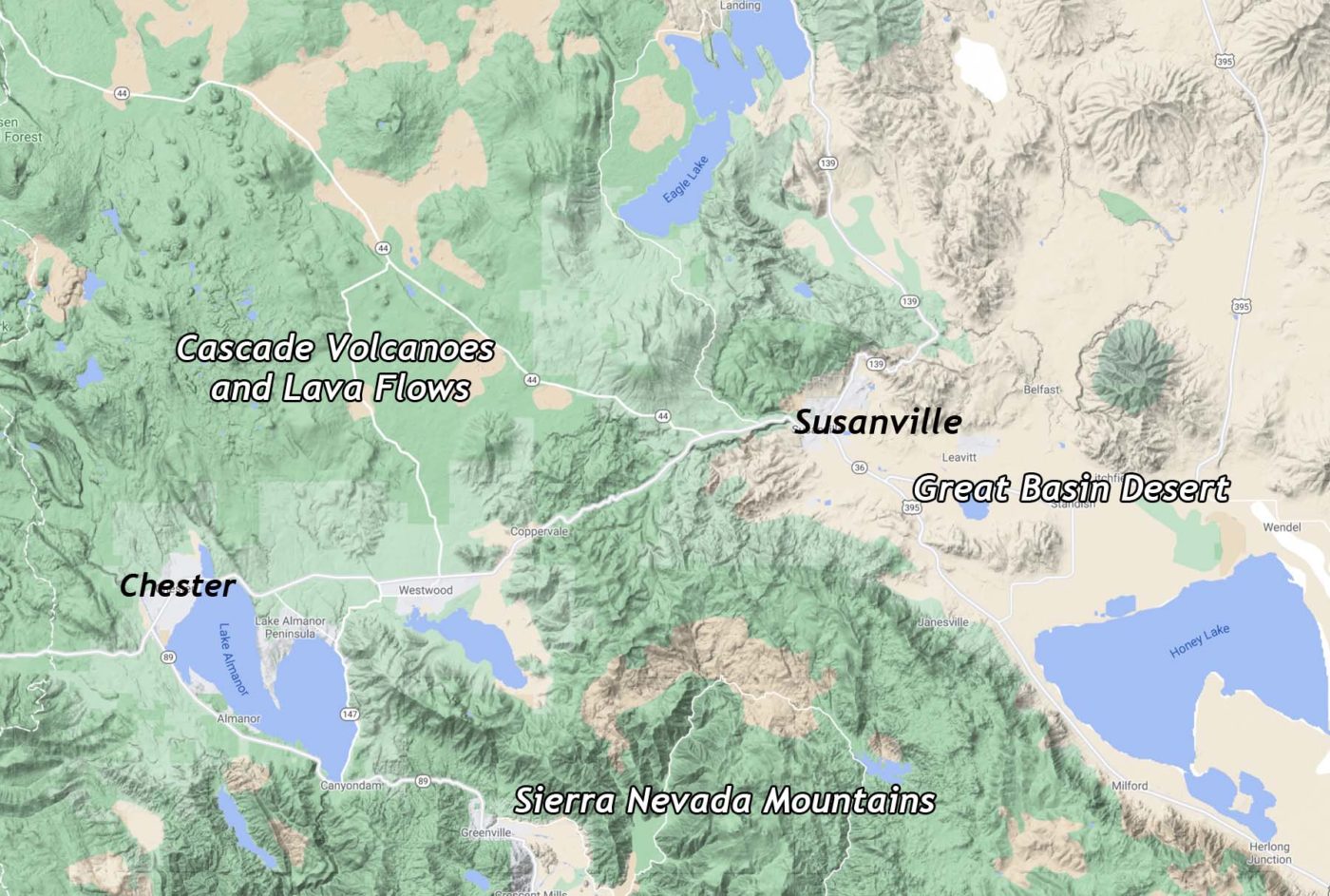 Here is the view from over Susanville, looking back to the west. I made a similar 3-D map in 2001 for the Devil Fire. It took $25,000 worth of software and had to render overnight. This one uses free software and took a couple minutes. How about that? The story is similar though — a wind-driven fire headed for the desert. 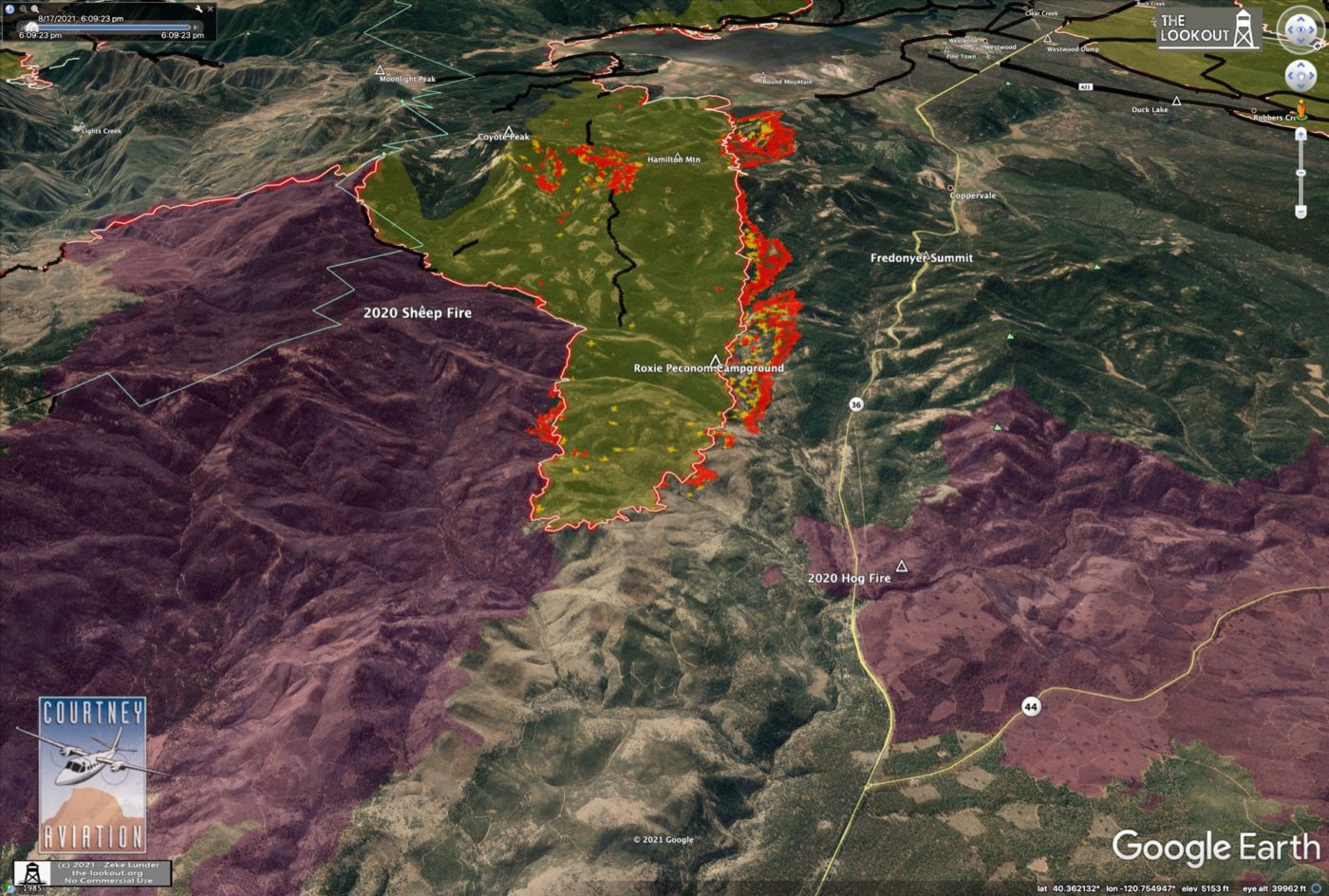 Every place has its own wildfire story. The story in Susanville and this funky slot between forests and desert is about strong summer winds that head up out of the Feather River, bound for Winnemucca, Burning Man, or other exotic places in Northern Nevada. Almost all of our historic fires here have made these narrow, wind-driven southwest-to-northeast runs. As a person who studies fire and has watched many towns burn down, I see these patterns and think about how to we should build or rebuild towns in a way that would be less prone to destruction. For example, if you built a trailer park out in the desert here and drew your streets to all run from the southwest to the northeast, you are setting up a scenario where a fire starting at the first house on the southwest edge of town will take out everything downwind. 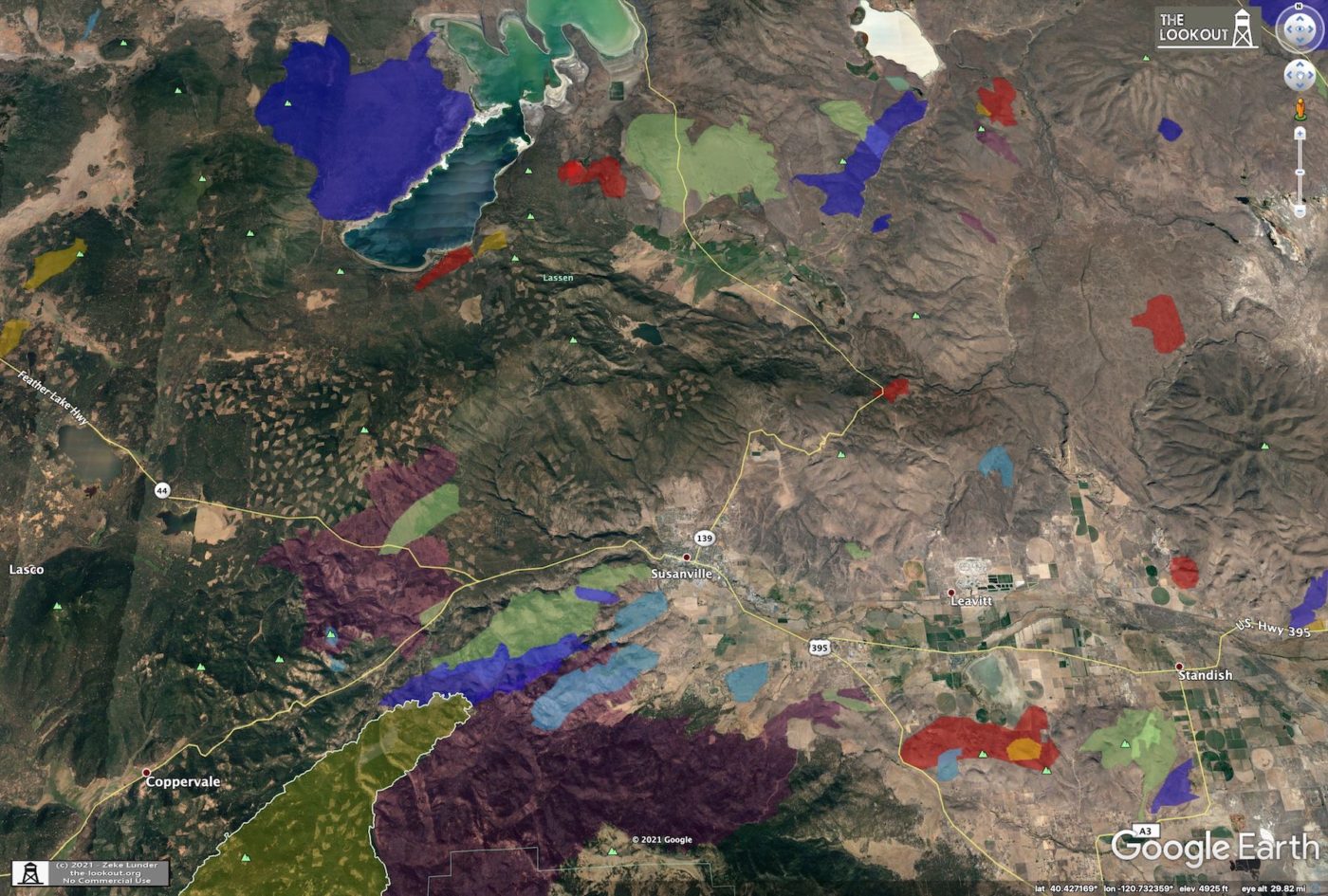 The Dixie Fire held up today where it bumped into areas on the 2016 Willard Fire that were salvage logged and cleared for replanting. There was minimal spread toward Susanville. 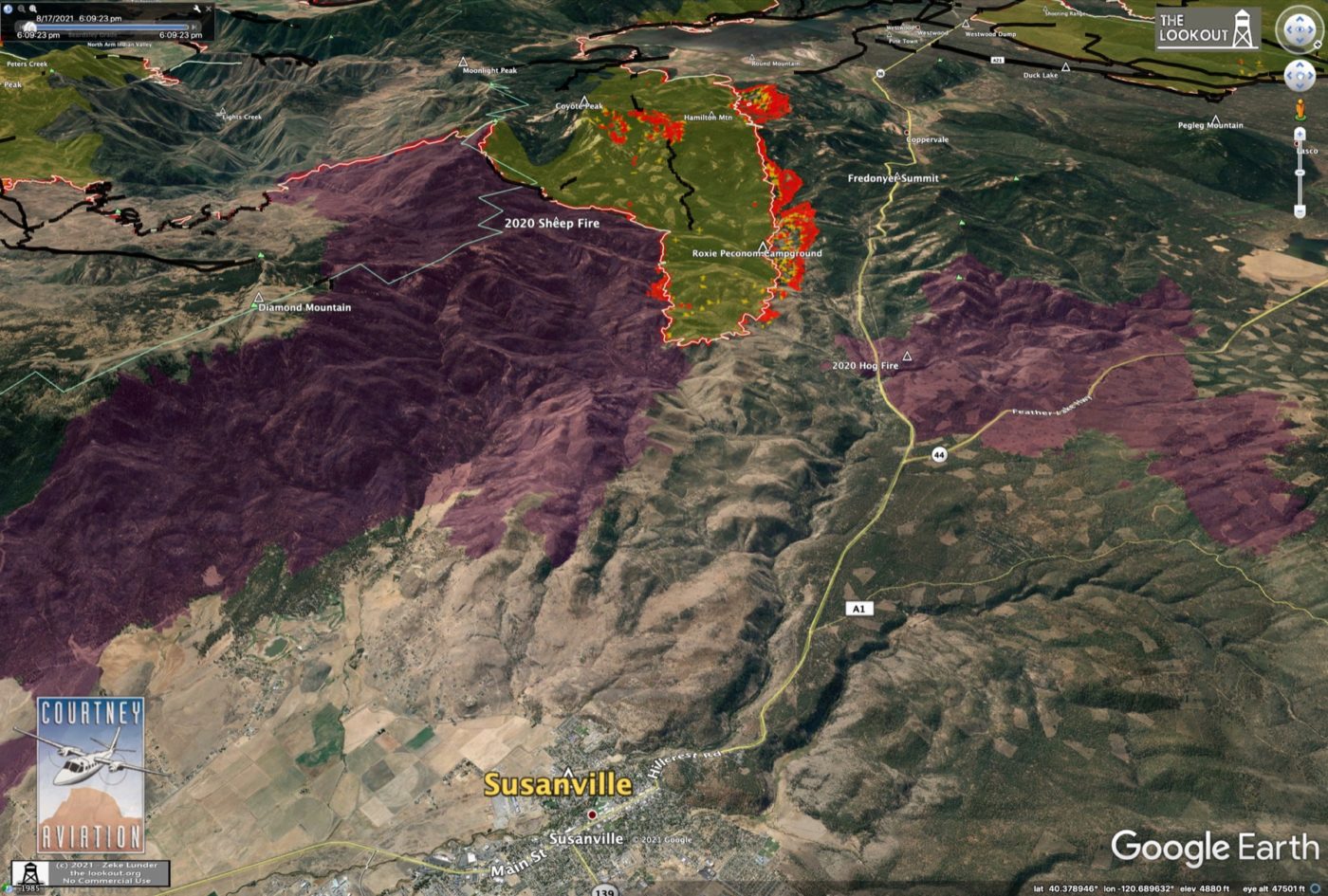 There was also minimal spread toward the north on the fire at Janesville as of 6pm. The fire did actively spread to the south this afternoon, however. 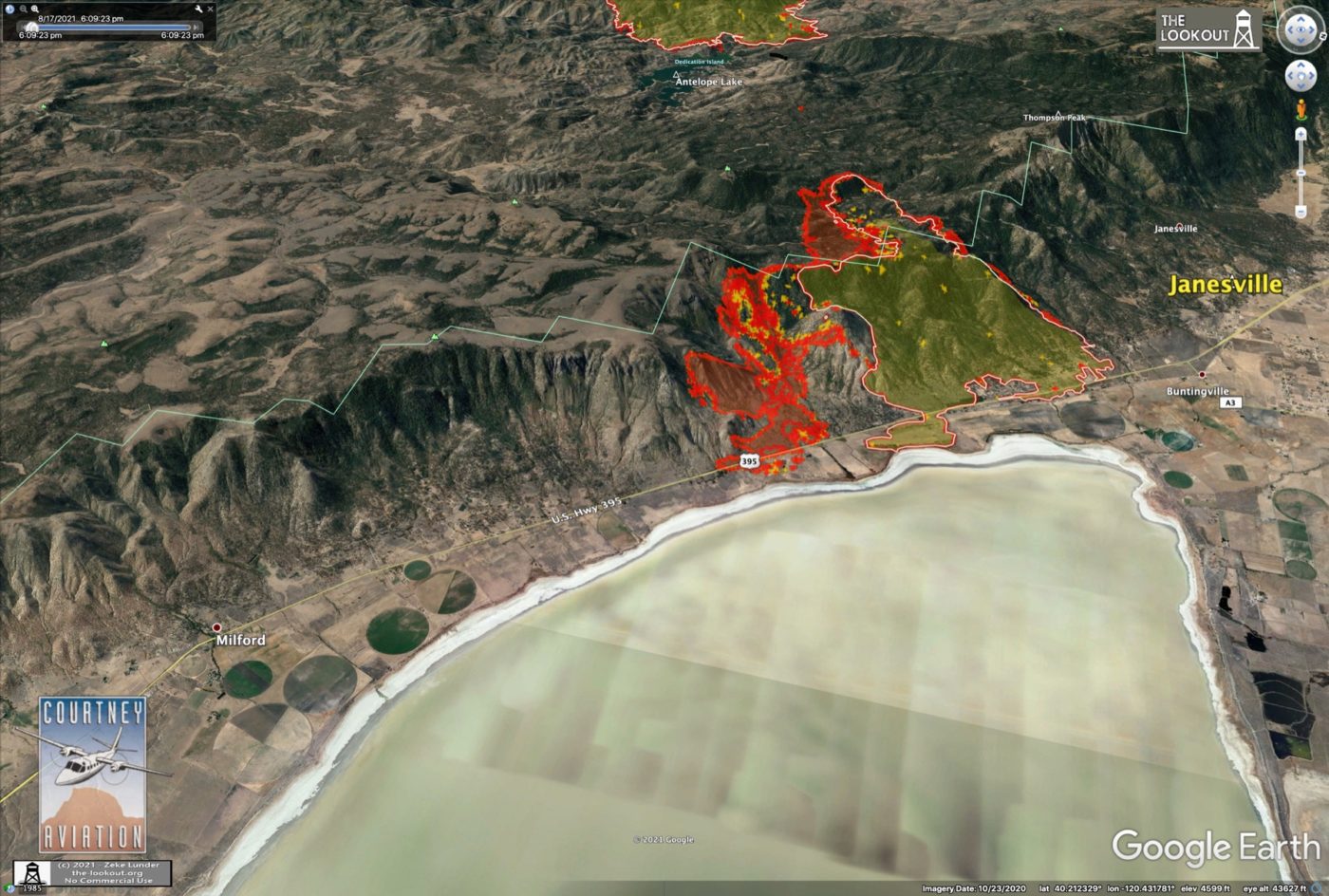 Heading west over the top at Antelope Lake, there was some flanking spread to the south out of Peters Creek. Crew fired Beardsley Grade, and some spots saw the fire move over containment lines or the road and out to the east. 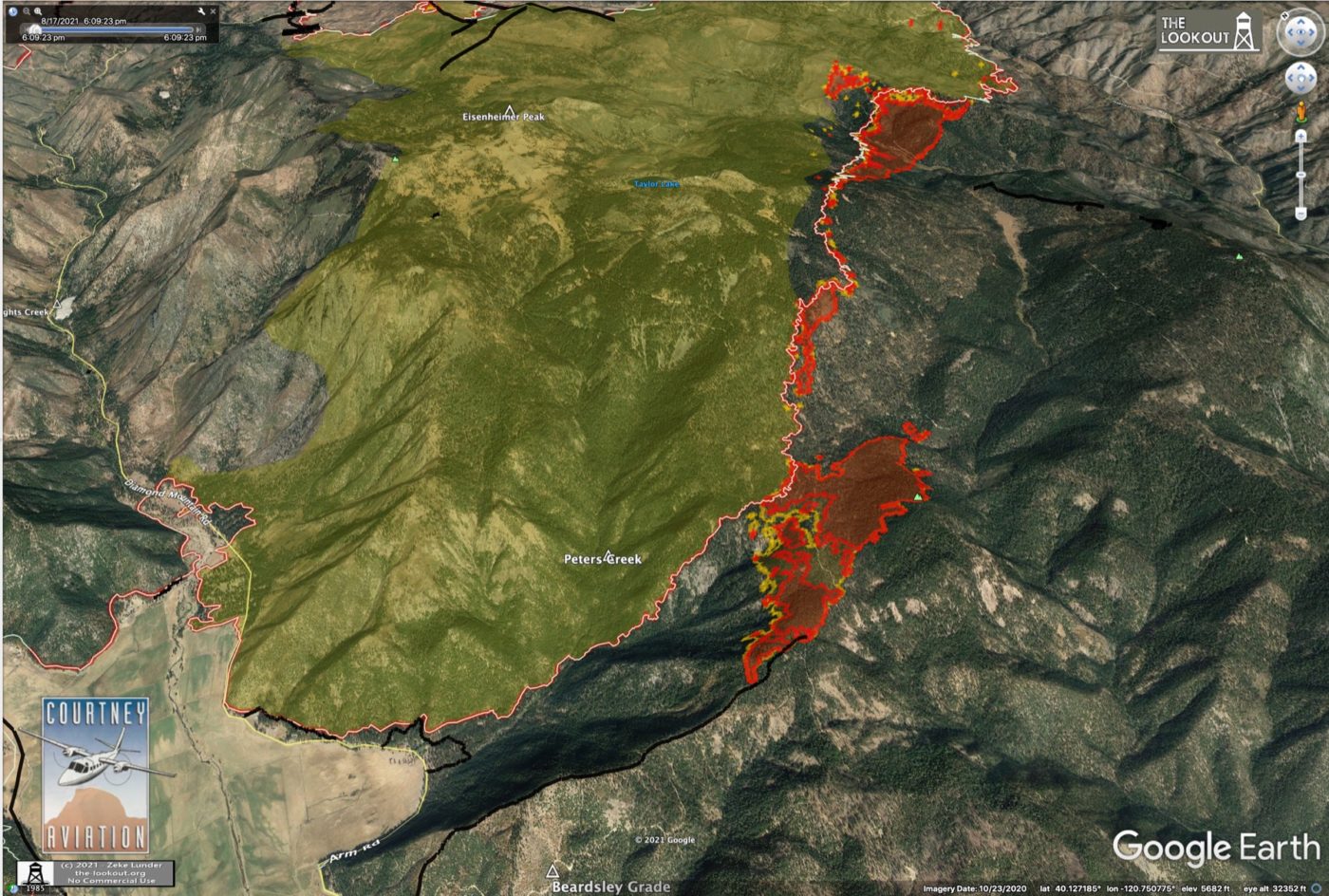 The other interesting story is the firing operation along Highway 89, the main road through Lassen Volcanic National Park. The four or five miles of firing sent a high-intensity head fire five miles to the north, and as predicted, it has joined with the Dixie Fire around Drakesbad. This is one of those bad outcomes that is hard to quantify or really balance against the overall gain. Tying in the western flank of the fire is very important in the big-picture of the firefight, and if these lines hold, they will protect Mineral, Mill Creek and communities all the way down to the Sacramento Valley. On the other hand, the western flank of the Dixie Fire is cooling off and much of it didn’t spread far today. It is hard to know what would have happened with the fire’s spread in next several days or weeks, and whether we could have done something less extreme to contain the western flank of the fire.

On large fires like this, good tactical opportunities often force us to make really difficult decisions. I don’t think anyone is happy with the outcome of burning the whole east side of the Lassen Range in a headfire, but we’d likely be even less happy if the fire took a walk all the way to Los Molinos over the next two weeks, also. The bummer of this particular fire is that it’s possible the line along the Highway 89 will blow out in the north winds and run to the valley anyway, and then we can all spend the rest of our lives wondering what would have happened if we had made a different call. 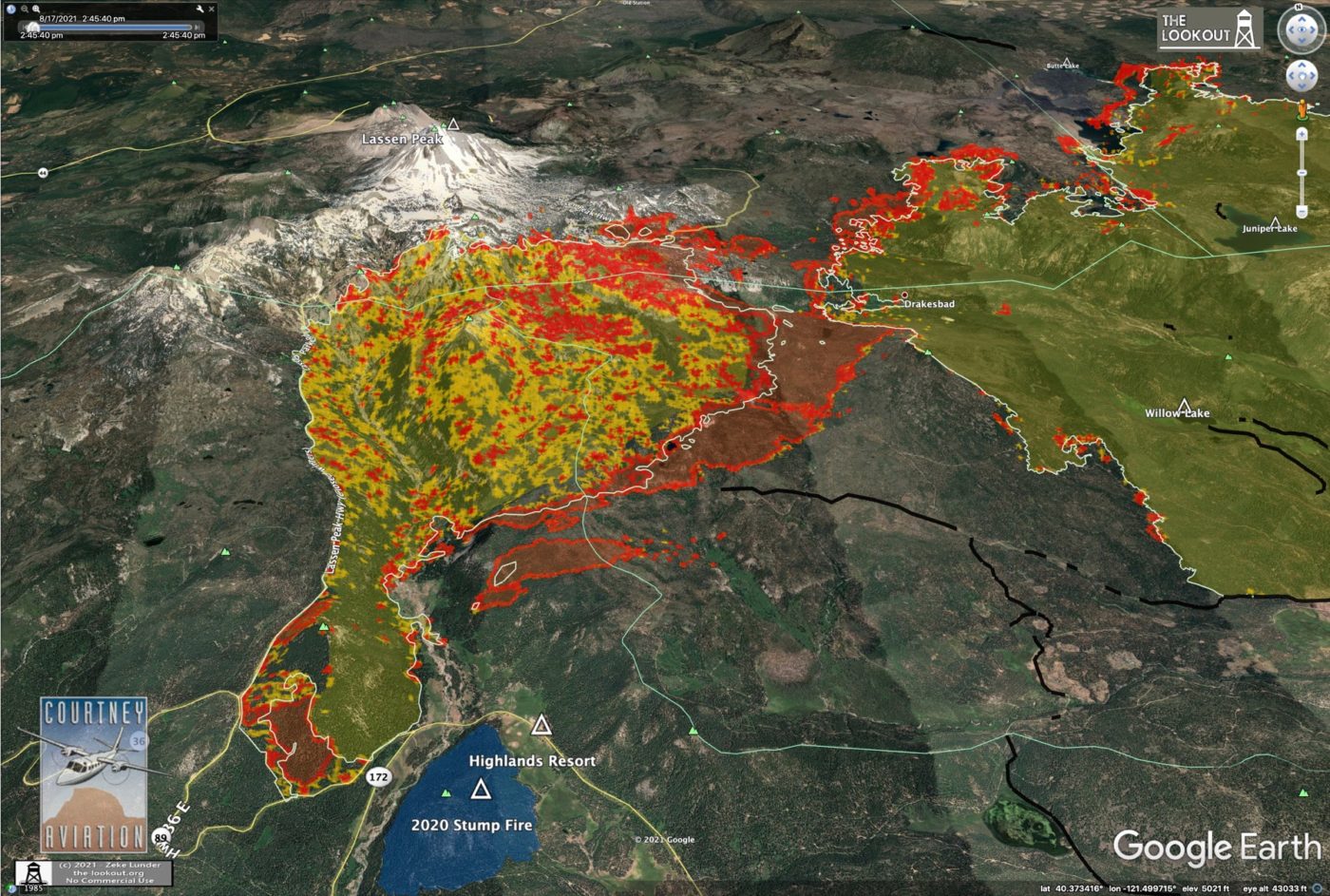 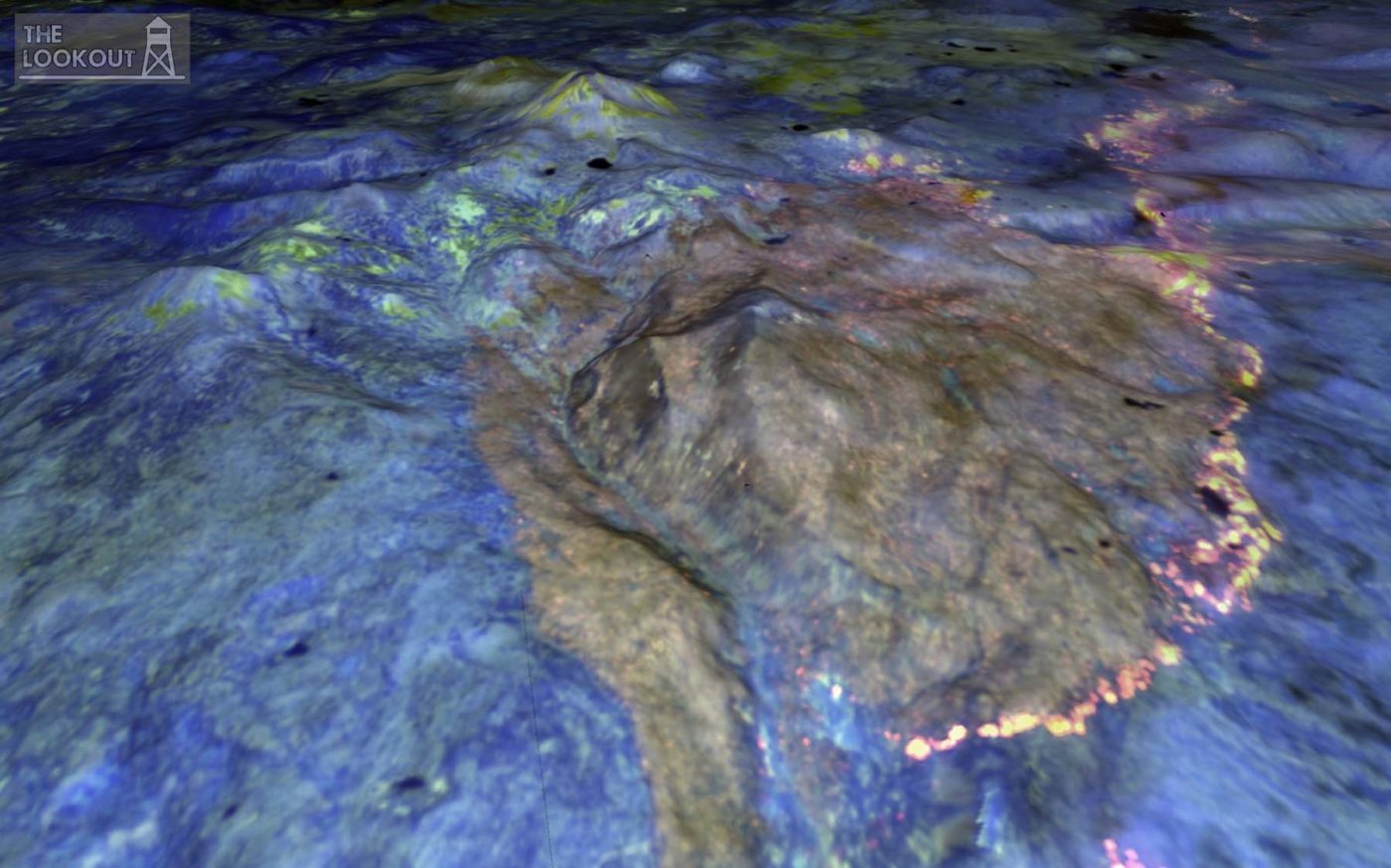 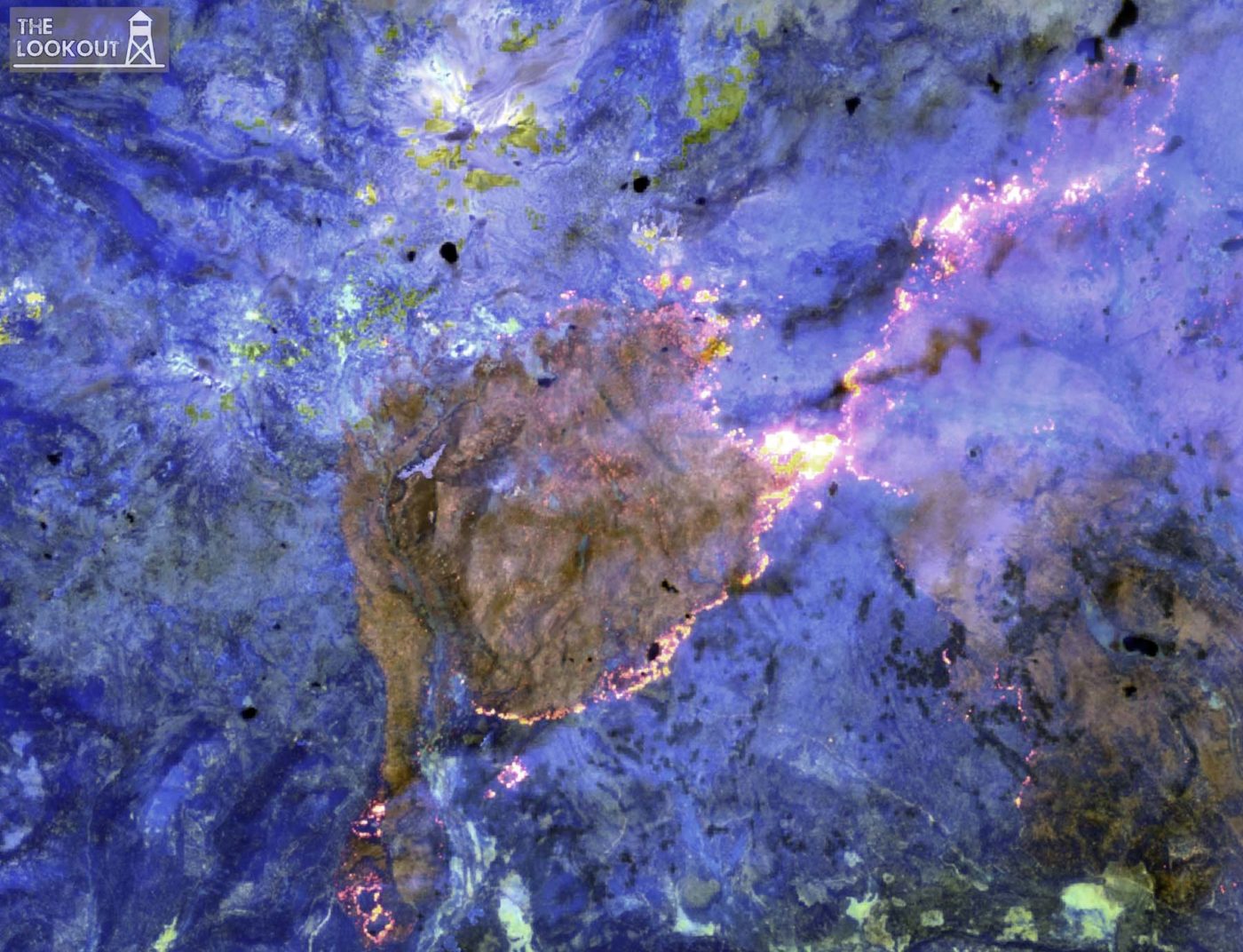 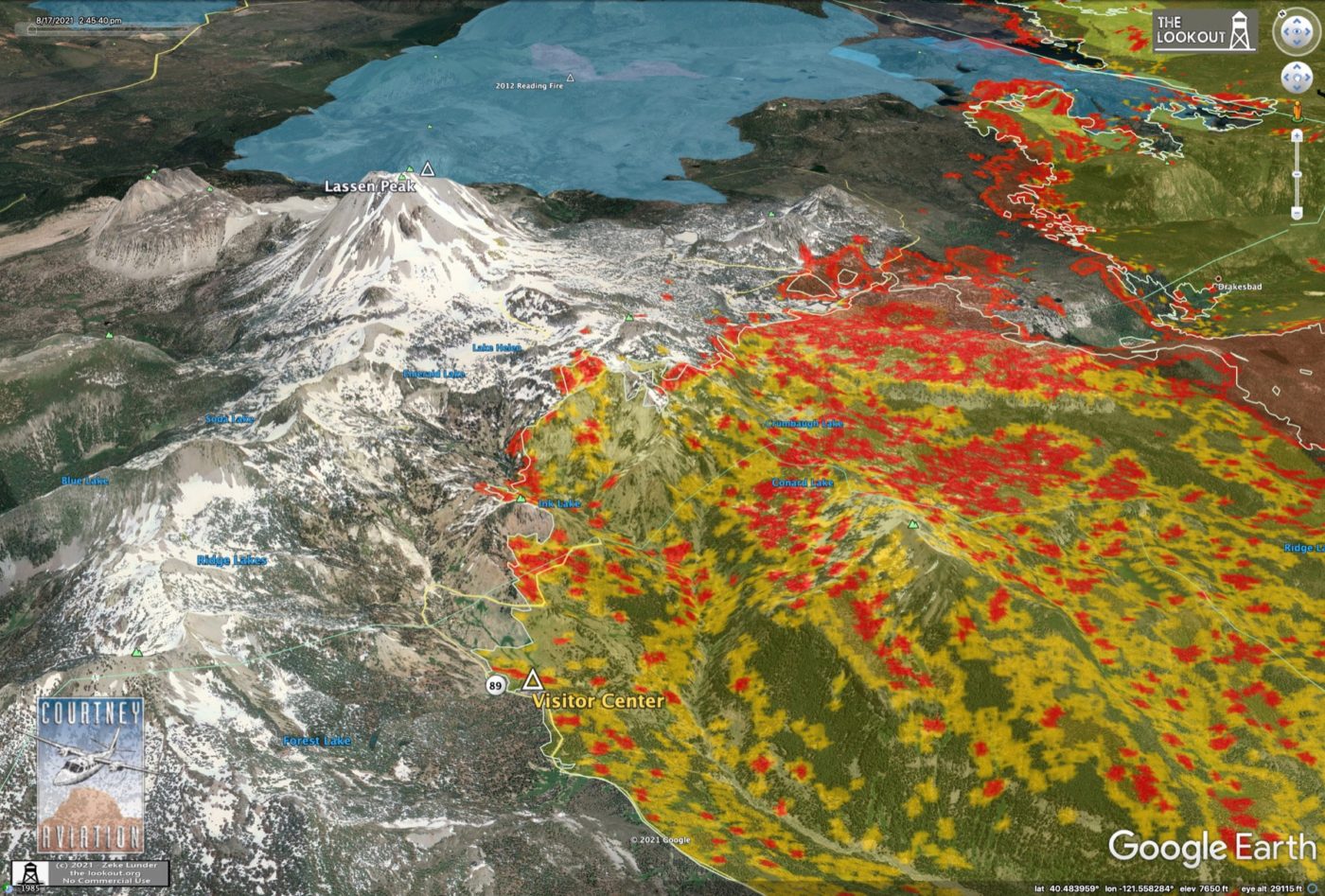 Here is another look at where the fire is in relation to the 2012 Reading Fire. 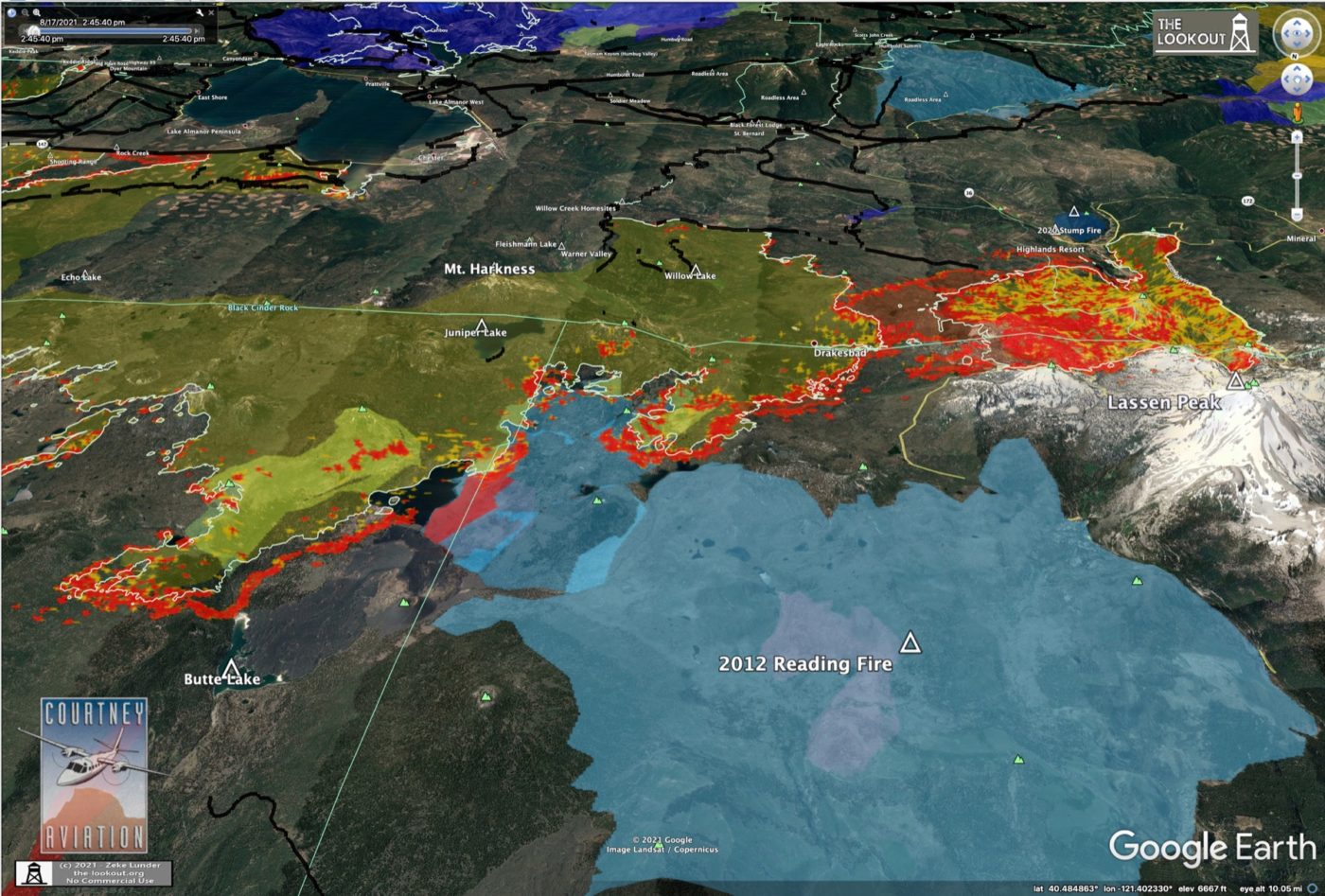 Enough for now. Hope everyone gets some rest.