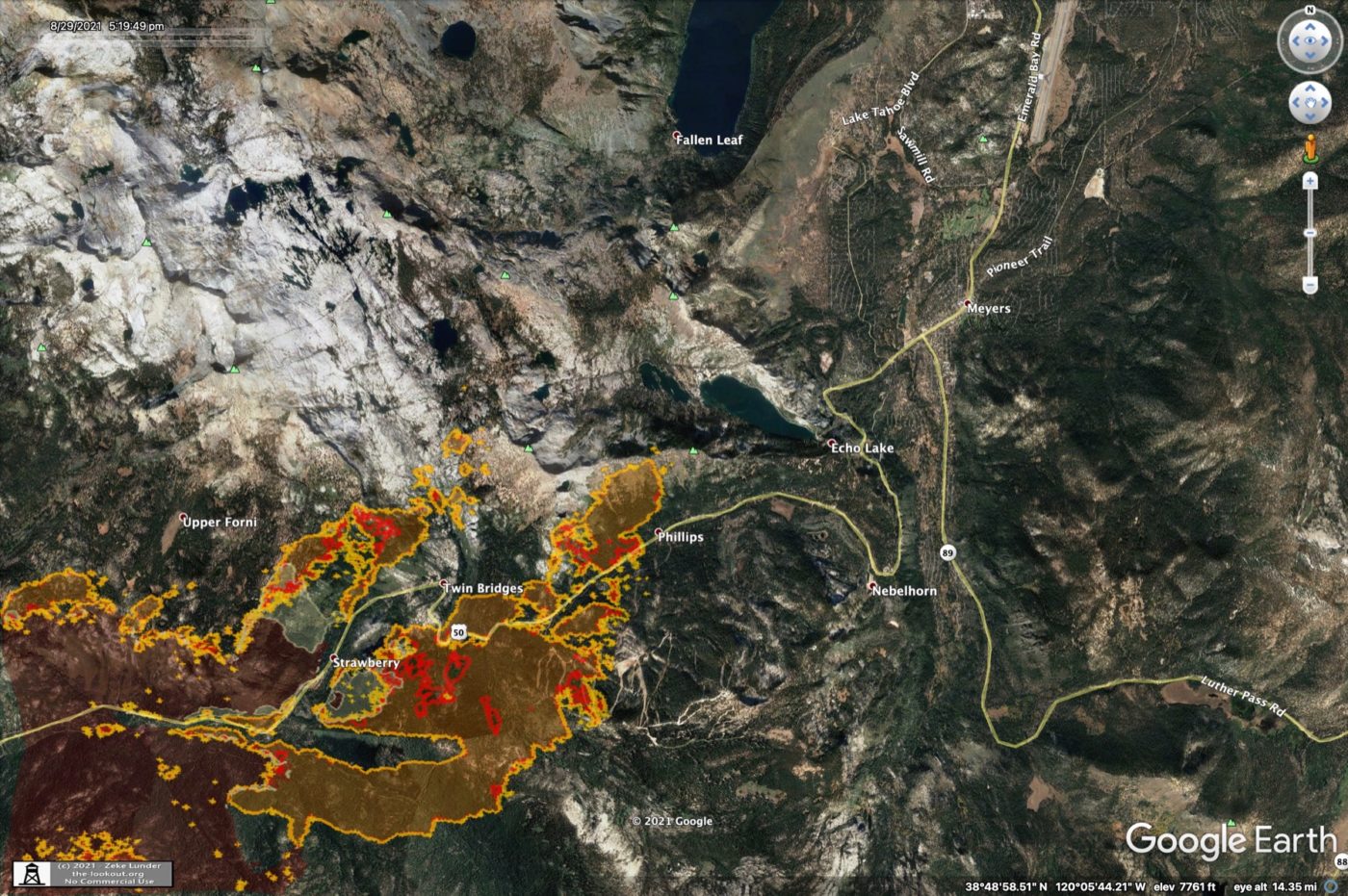 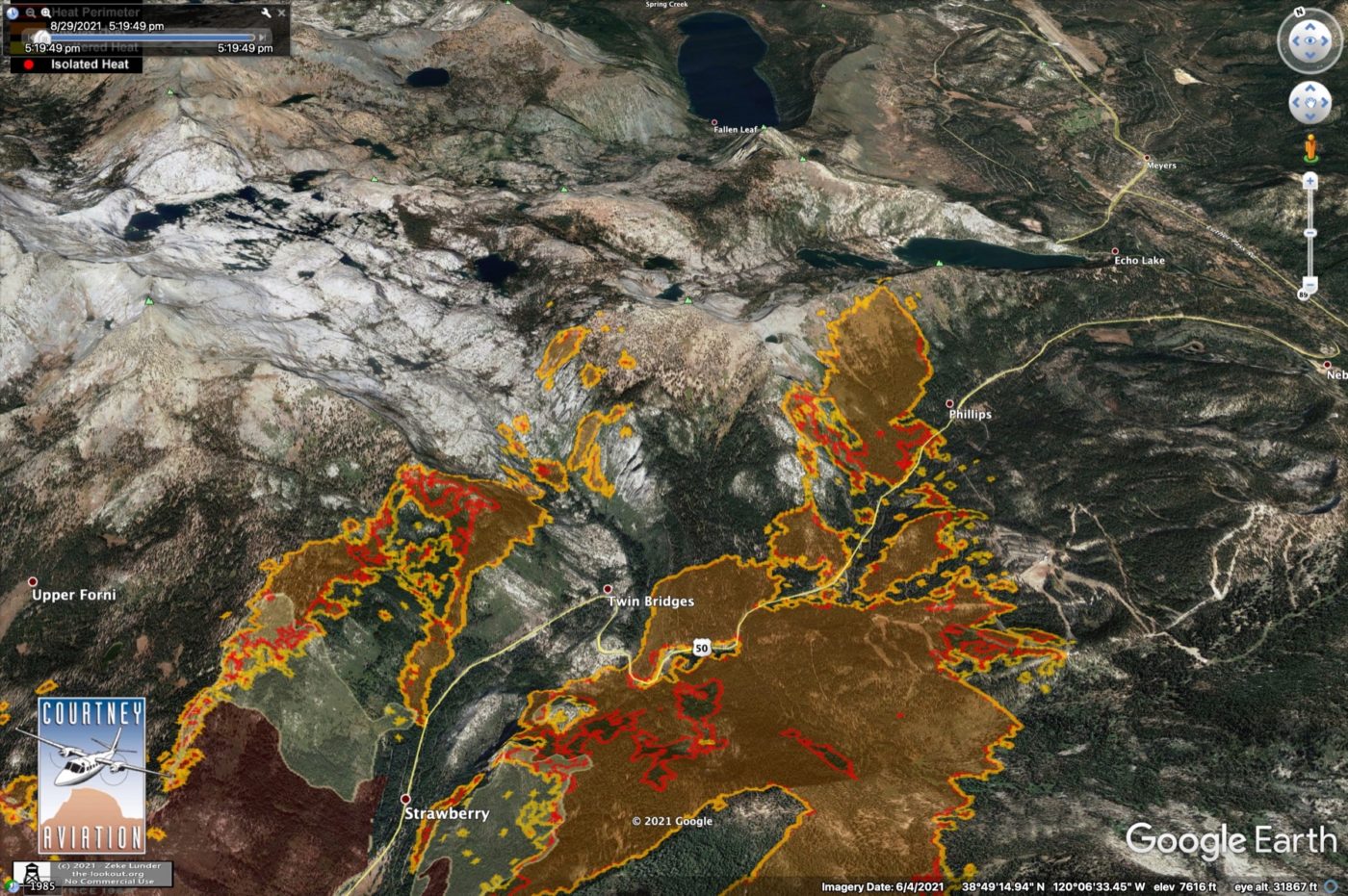 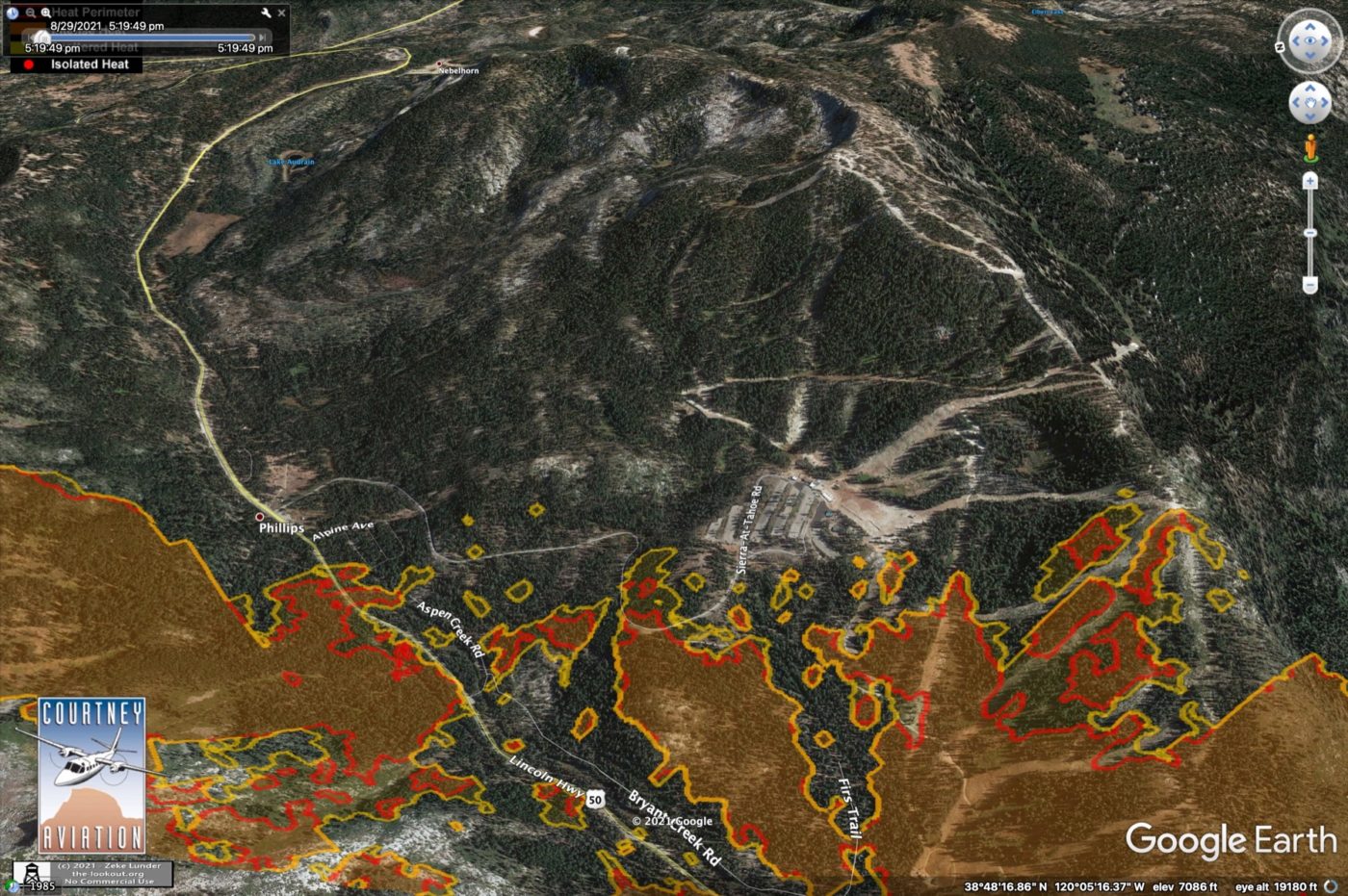 A wider view to northeast, showing proximity to Echo Lake and dropoff to Meyers. 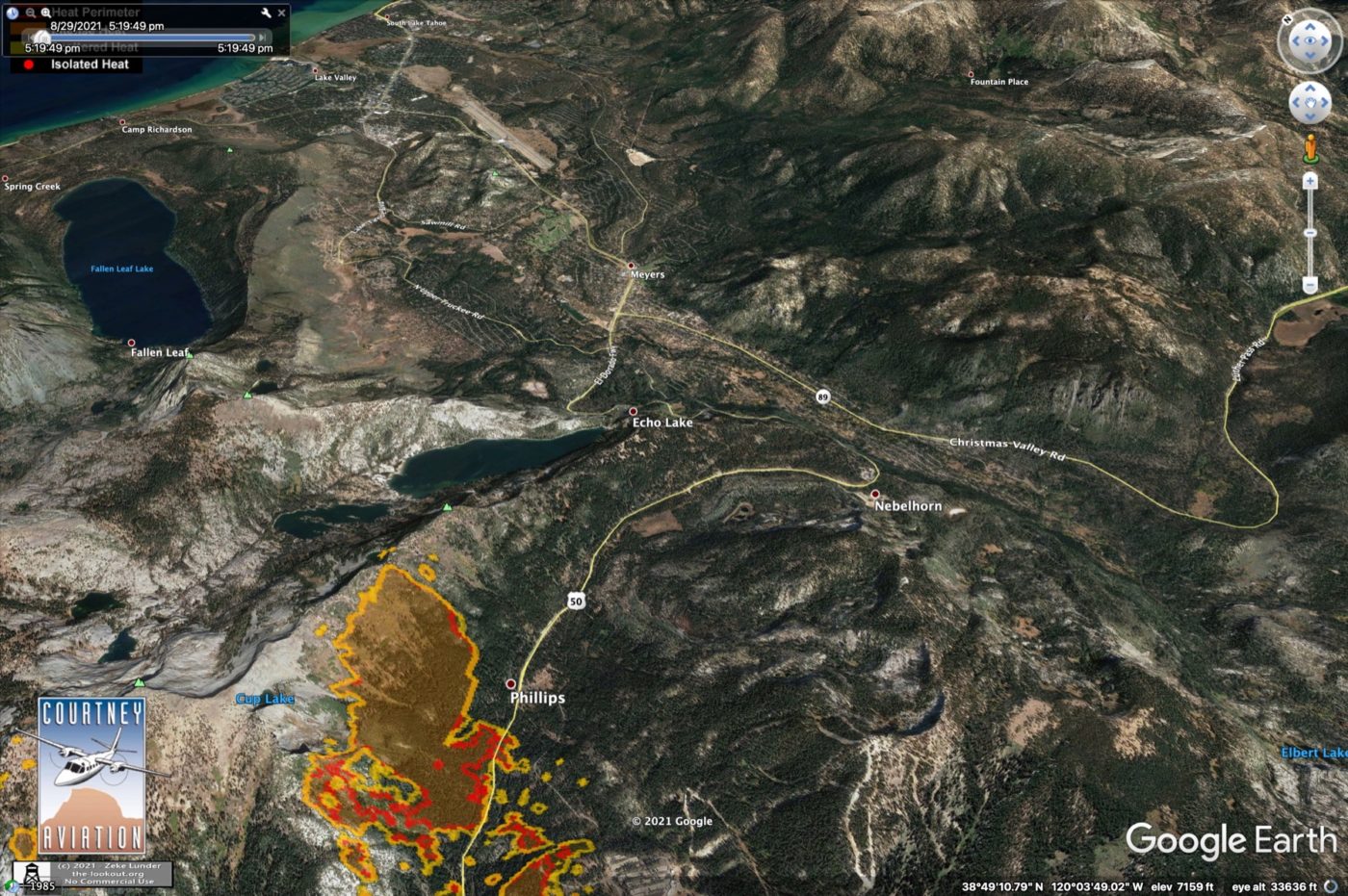 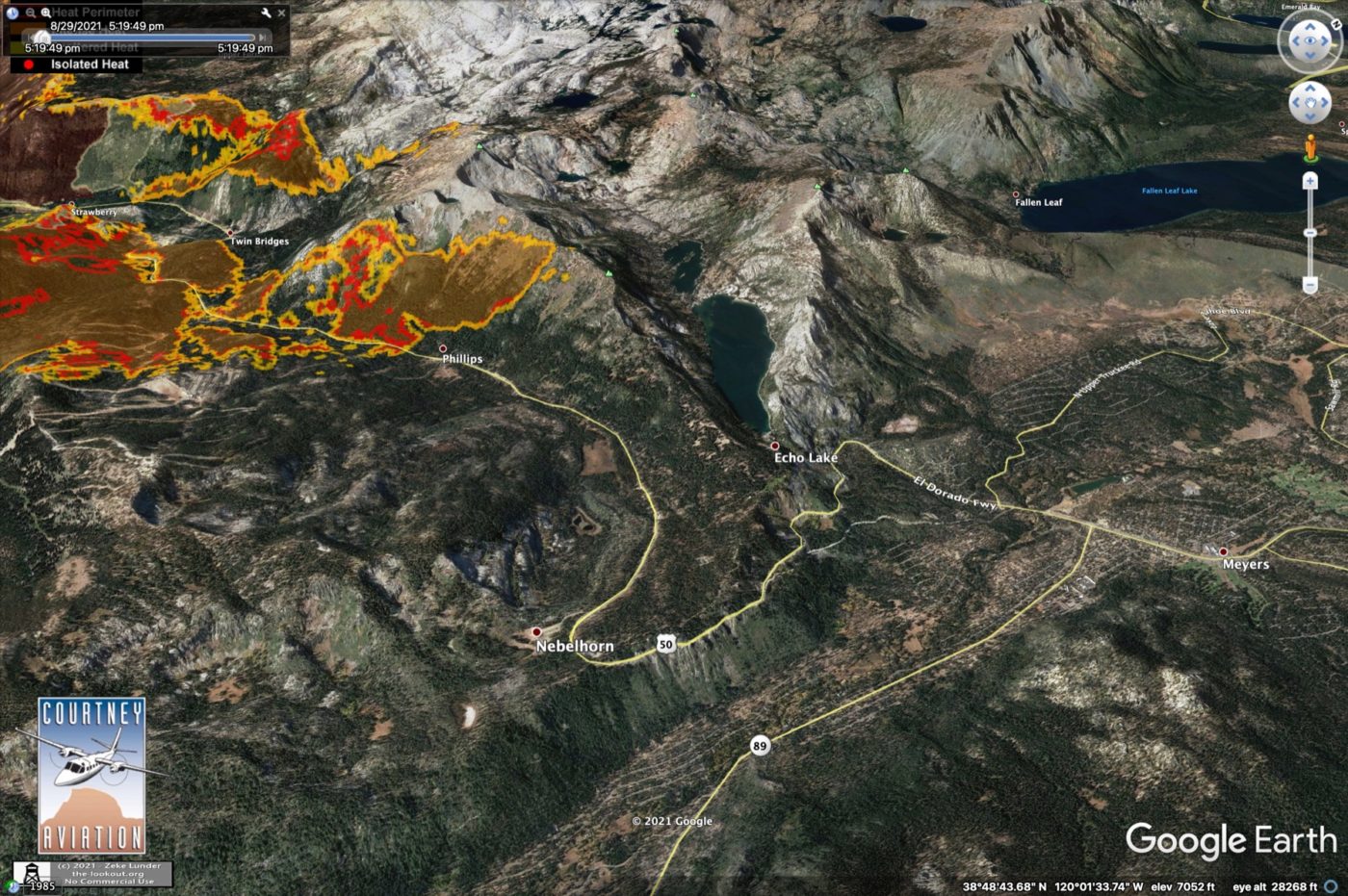 This image shows dynamics of today’s wind-driven fire runs, starting west of Strawberry where fire crossed bulldozer lines last night. There were three different heads of this fire running here today. One stayed on north side of Highway 50, another took off from a spot fire at Lovers Leap, and the southernmost took off over the ridge between Strawberry and Sierra-At-Tahoe. Having such a broad expanse of well-established heat in the basin of Sierra-At-Tahoe creates challenges for firefighting, as there is a multitude of places which can flare up in the right winds and send runs east toward the dropoff to Meyers. 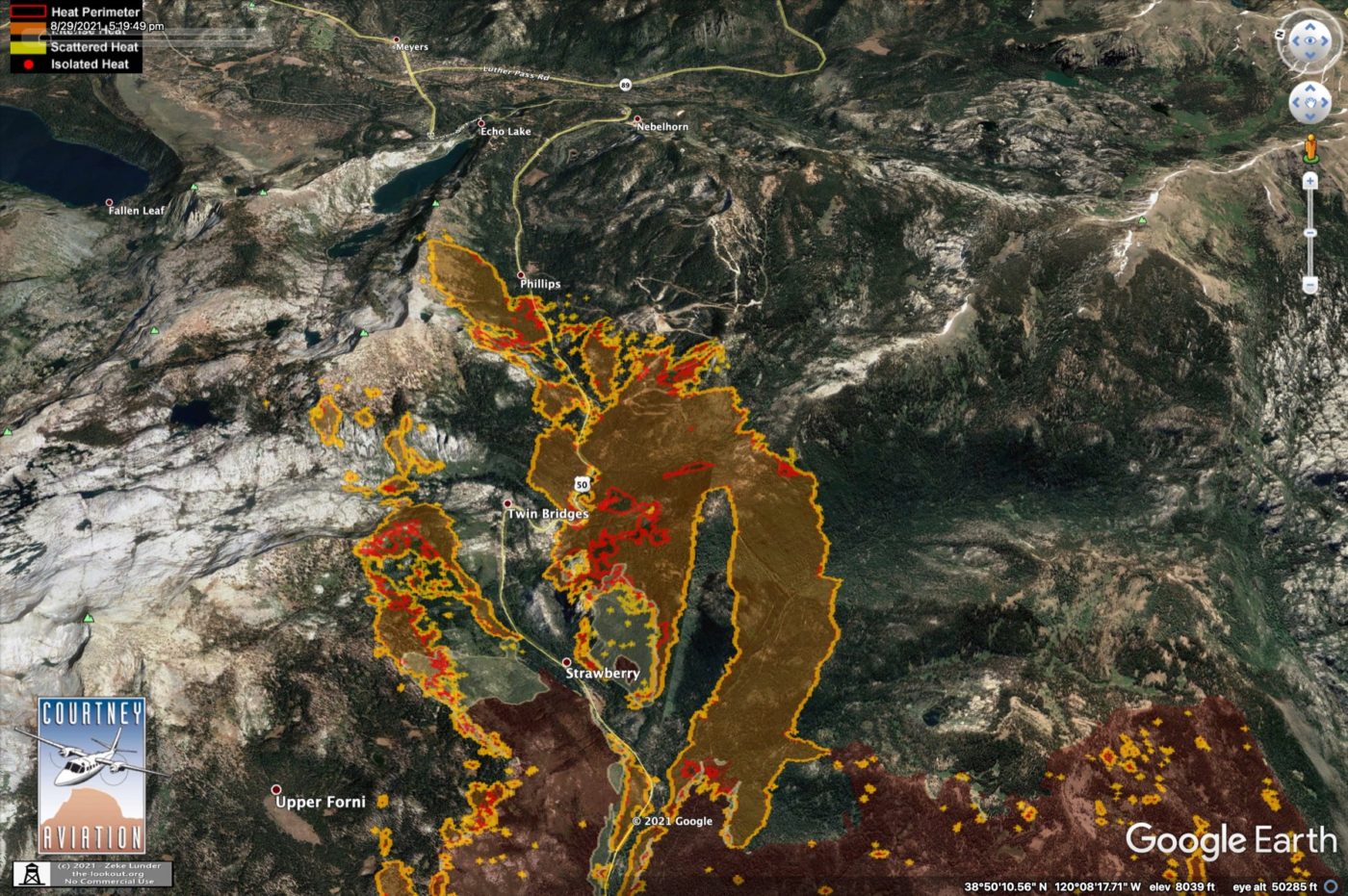 MANDATORY EVACUATIONS FOR MEYERS AND CHRISTMAS VALLEY.
Fire is on the move to the east and southeast today running about a mile toward Leek Springs Lookout on the SE flank of the fire. The webcams on Armstrong Lookout have been showing this extreme fire behavior since shortly after dawn this morning. The fire has burned on both sides of Strawberry, but no structures have been lost here, yet. The main head of the fire has made a major run up the Highway 50 corridor and is either inside of, or nearly to the Sierra-At-Tahoe ski resort. There are reports of spot fires as far ahead of the fire as Ralston Lake, to the northwest of Echo Lake. The fire is burning intensely on the divide between SAT and Strawberry Creek. Heat from this is visible on a new infrared camera that has just been installed on the top of Heavenly Valley.

Here is coarse-scale heat detection data from 3pm on August 29. I usually don’t post this as authoritative intel, as it can be off by miles, but given other reports, this seems to be fairly accurate. Sierra-At-Tahoe is on middle-right. 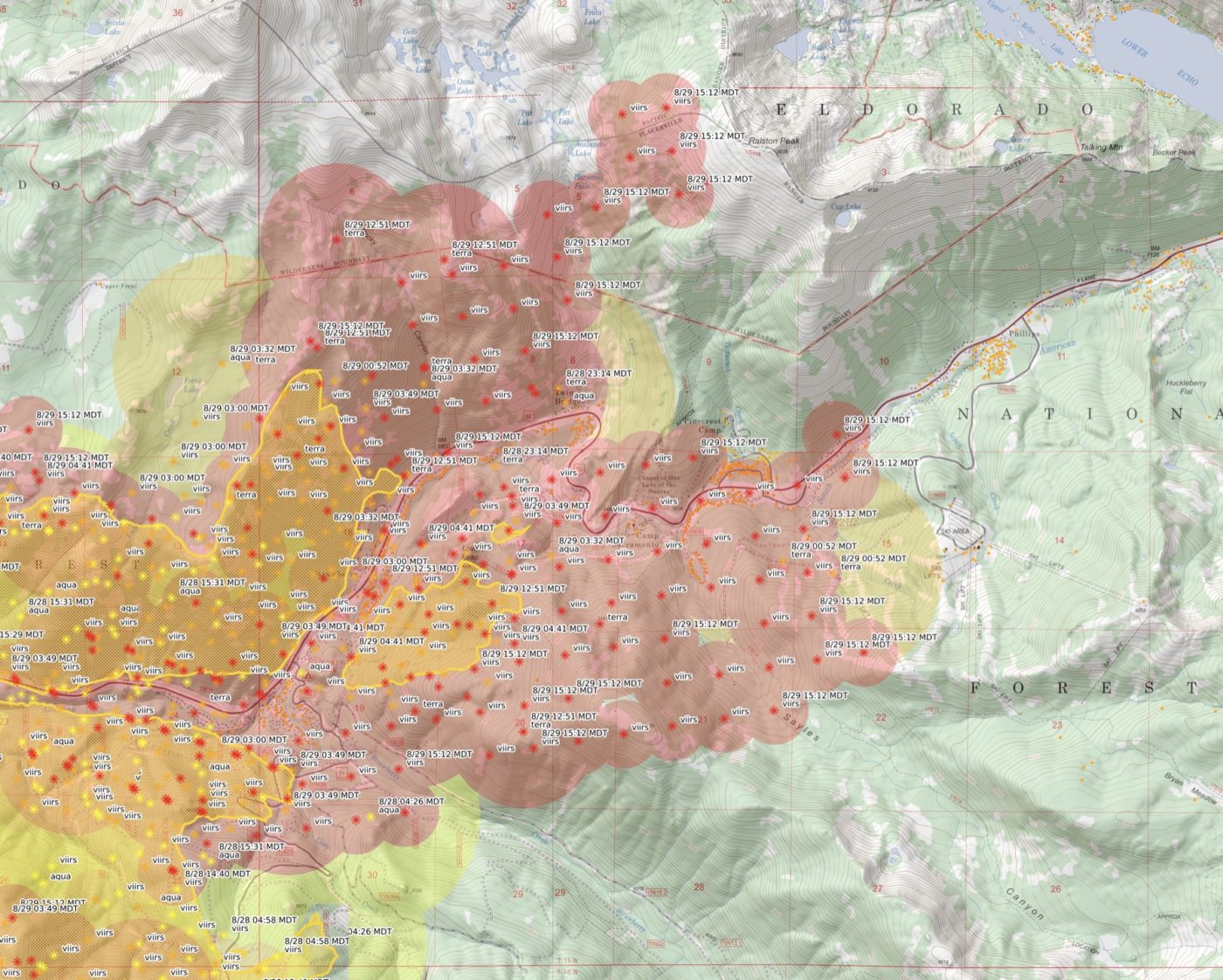 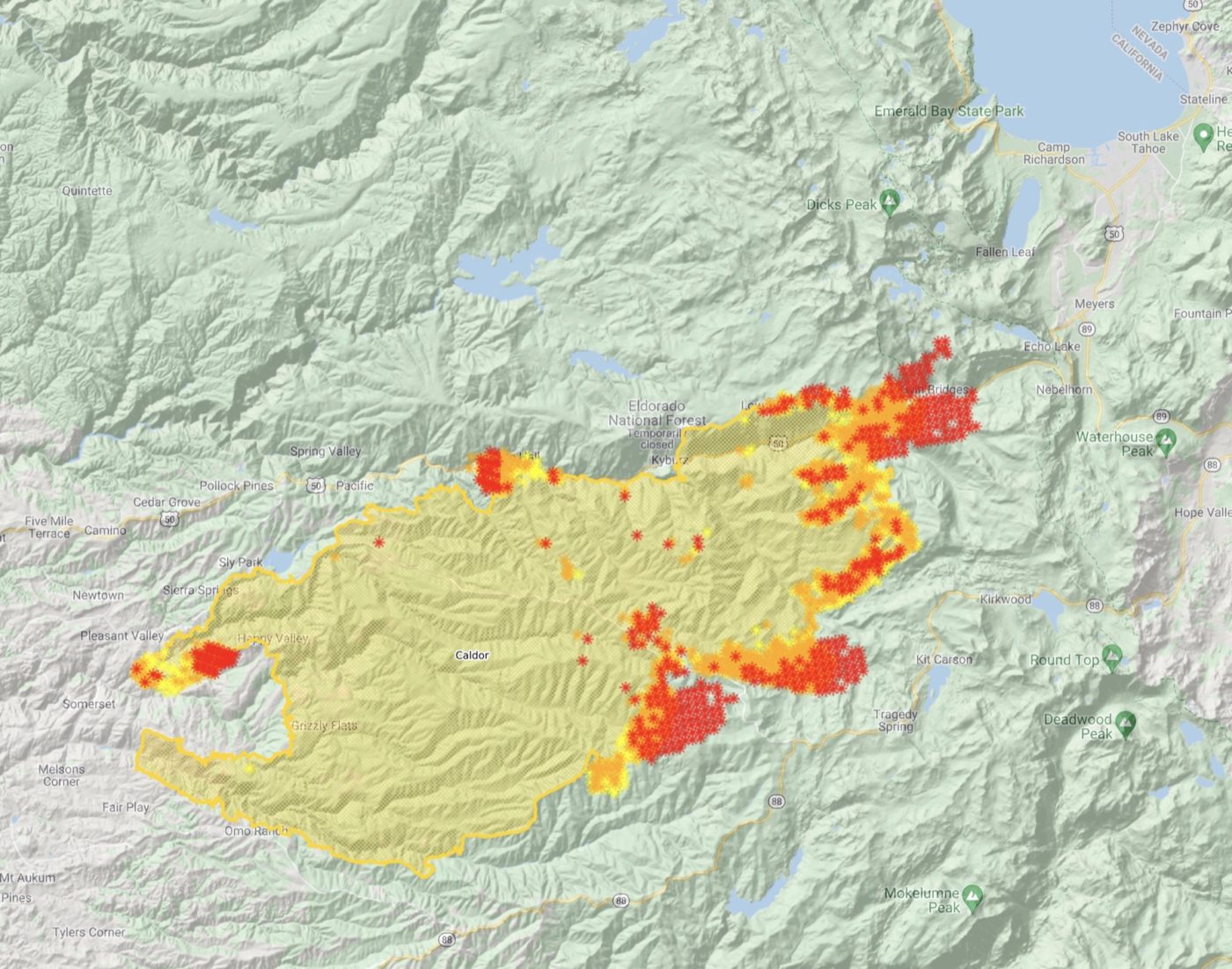 As mentioned earlier, the east head of the fire is now in an area where the topography, winds and fuel loading are all in alignment for uncontrollable, high-intensity fire behavior. Firefighters may try to make a stand somewhere around Echo Lake, but under current conditions this will have a low likelihood of success. Creating wide firelines and choreographing a major firing operation — where we scrape a large fireline and then light fires on the fire-side of it to create an area without available fuels in front of the fire — is a very difficult thing to pull off under the best conditions. Major burning operations usually take days of preparation and require massive numbers of firefighters to prepare the fireline, clear out fuels on both sides of the line, install hoselays, and do other prep work like falling snags that can catch fire and fall across the line.

This prep work has not been done to the east of where the fire is currently burning, and deploying the hundreds of firefighters needed is now likely too dangerous, even if there was a workable plan. Given the forecasts for major winds over the next few days, it seems very likely the fire is going to burn past Echo Summit. If you are between South Lake Tahoe and Meyers, don’t let the fact you are not inside a designated evacuation warning zone lull you into any extra comfort. Here is a link to current evacuations orders and warnings.

Summary
Fire moved to Strawberry on both sides of Highway 50, made a run up the the north-facing slope to the east of the community and became established at Lover’s Leap. As of 3:30am, it was 2.5 miles upcanyon from where it had been 28 hours earlier, past major dozer lines in Strawberry Creek. Fire is now 5.5 miles from Echo Summit. The portion of fire on the north side of Highway 50 moved 1.25 miles east in same 28 hour period.

Elsewhere, bulldozer firelines south of Cody Lake were still holding at 3:30am. West of there, the fire had bumped into the 2019 Caples Prescribed Burn/Wildfire. Adjacent to Mormon Emigrant Trail, the fire grew about 2,000 acres to the south. The large spot fire on the southern edge of fire burned back into the main fire and continued to back actively into Cat Creek. The south side of the fire around Croft still looks like it is cooling off. No new spread downcanyon in Middle Fork Consumnes River. On the northwest corner of the fire, east of Pleasant Valley, fire spread about 1/2 mile west in Camp Creek, and backed further into the North Fork Consumnes River. 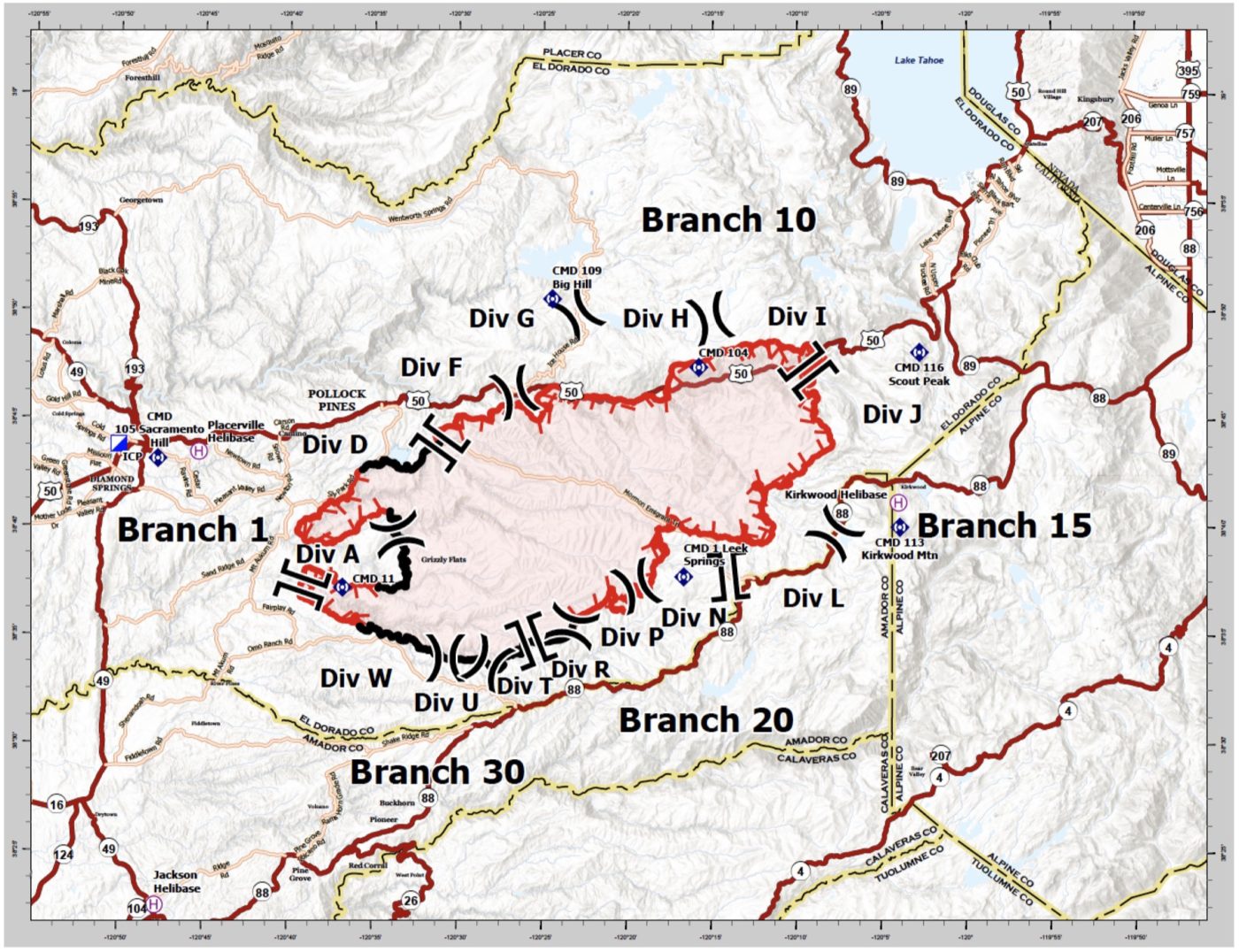 Detailed Maps
Maps from 3:30am, 8/29/2021. White line represents 28 hours fire growth.
Looking upcanyon and east on Highway 50 over Strawberry and Lovers Leap. Note the spot fire in center of screen. Black lines are bulldozer firelines. The new body of fire to the south (right) Strawberry is past all main dozer lines on the east head of the fire. 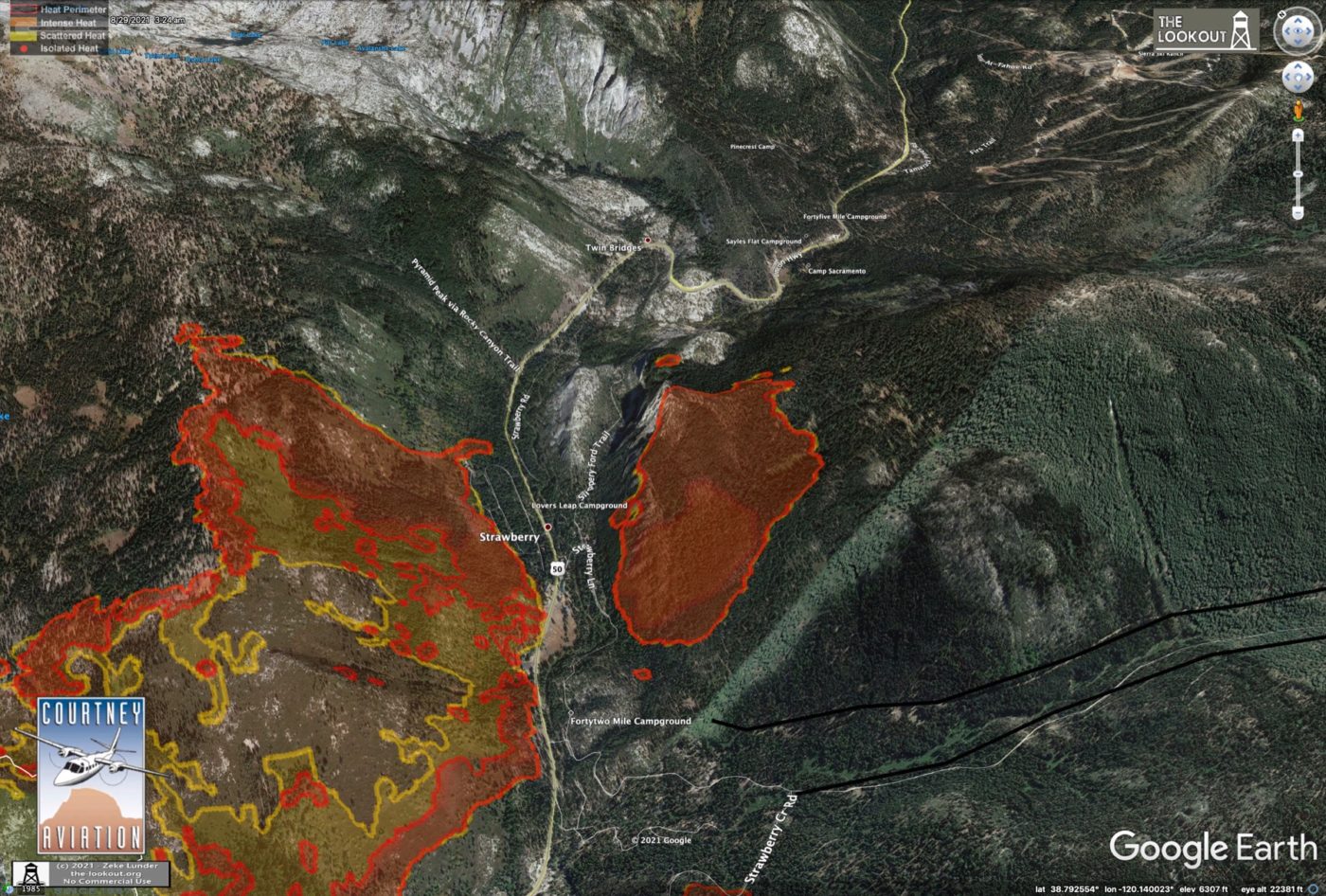 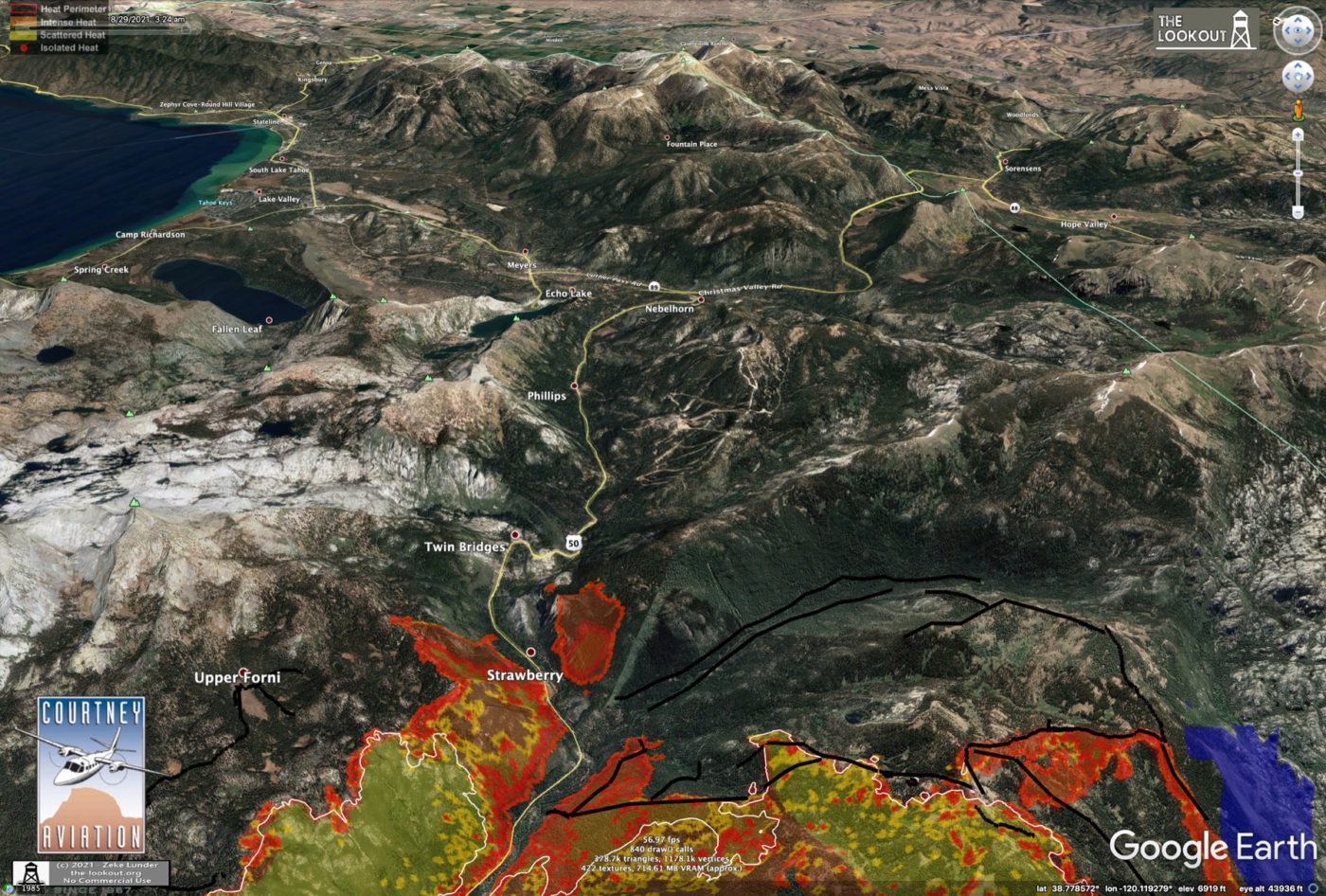 A closer look at the Sierra-At-Tahoe area. The fire was about 3/4 of a mile off the bottom of this image at 3:30am. Once the fire becomes established around Camp Sacramento it will have what firefighters call ‘alignment’ — all the factors which drive rapid fire spread (terrain, upcanyon/prevailing winds, heavy fuel) are present to fuel a major fire run. 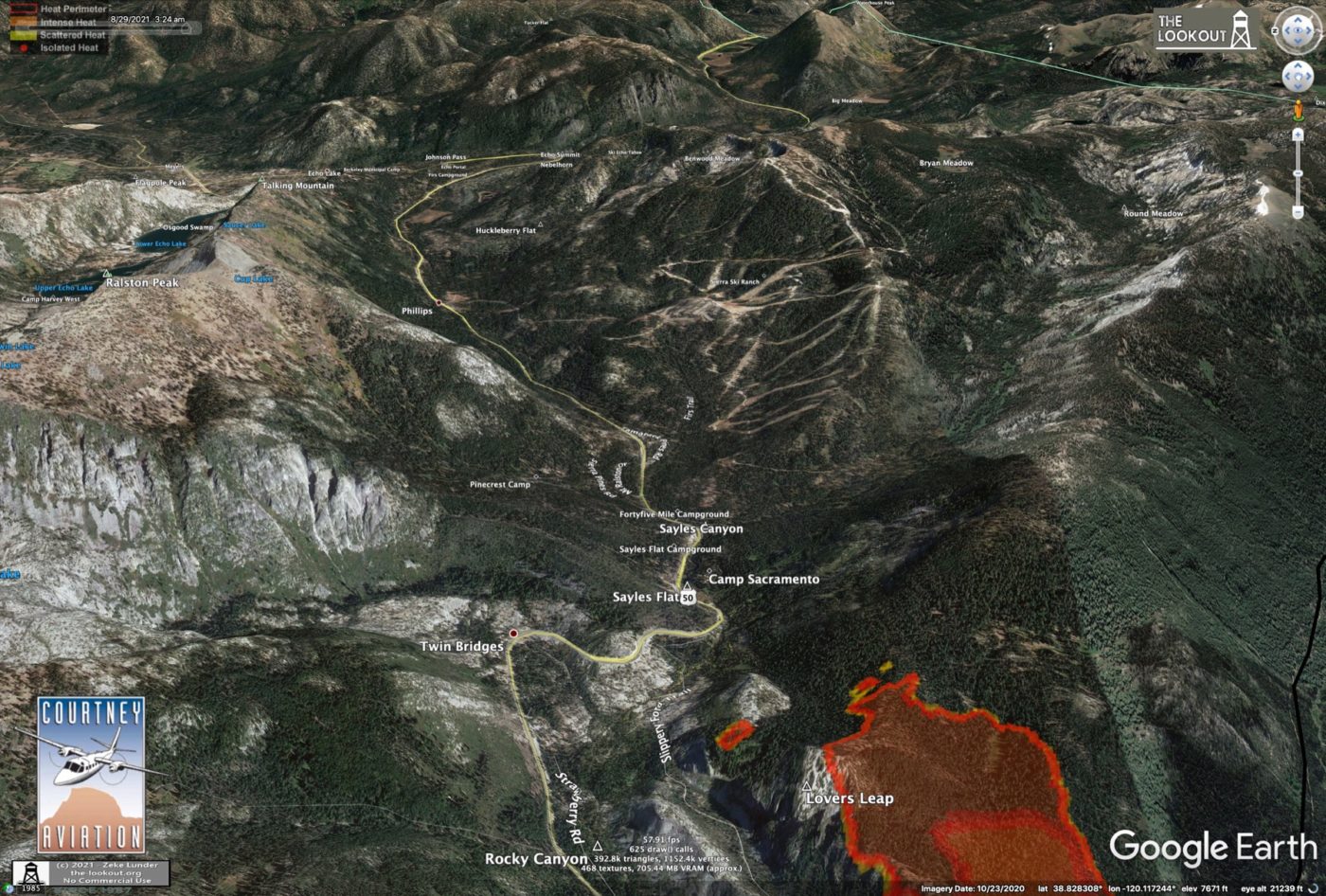 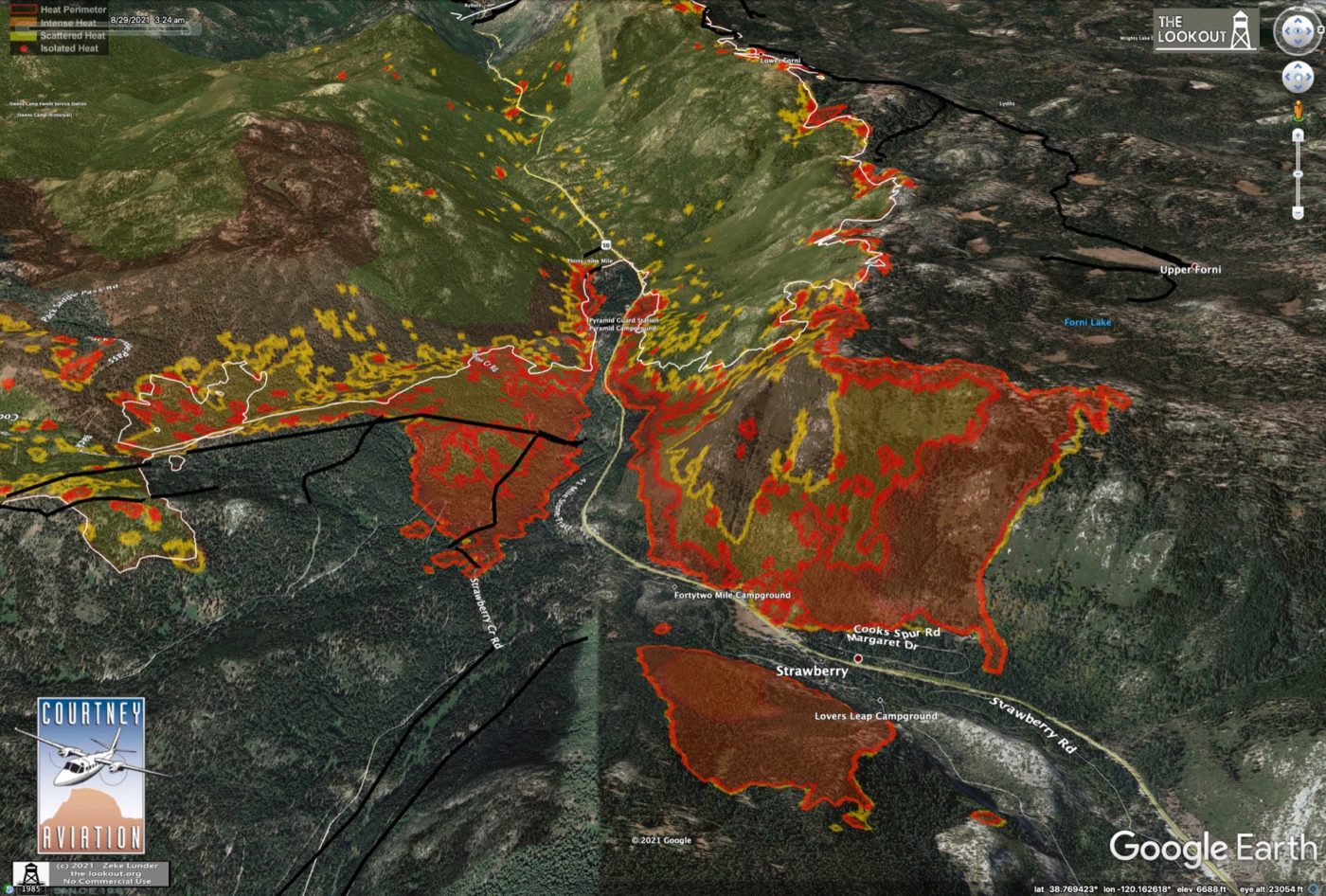 Looking west over the southeast corner of the fire. Firing operations from two nights ago south of Cody Lake are still holding, but fire spread up Cody Creek from below may burn up to Cody Lake now. The Caples Burn is slowing the spread of the fire to south, here, but fire has outflanked the Caple Burn to the east (upper-left in this image) and is pushing toward Highway 88. 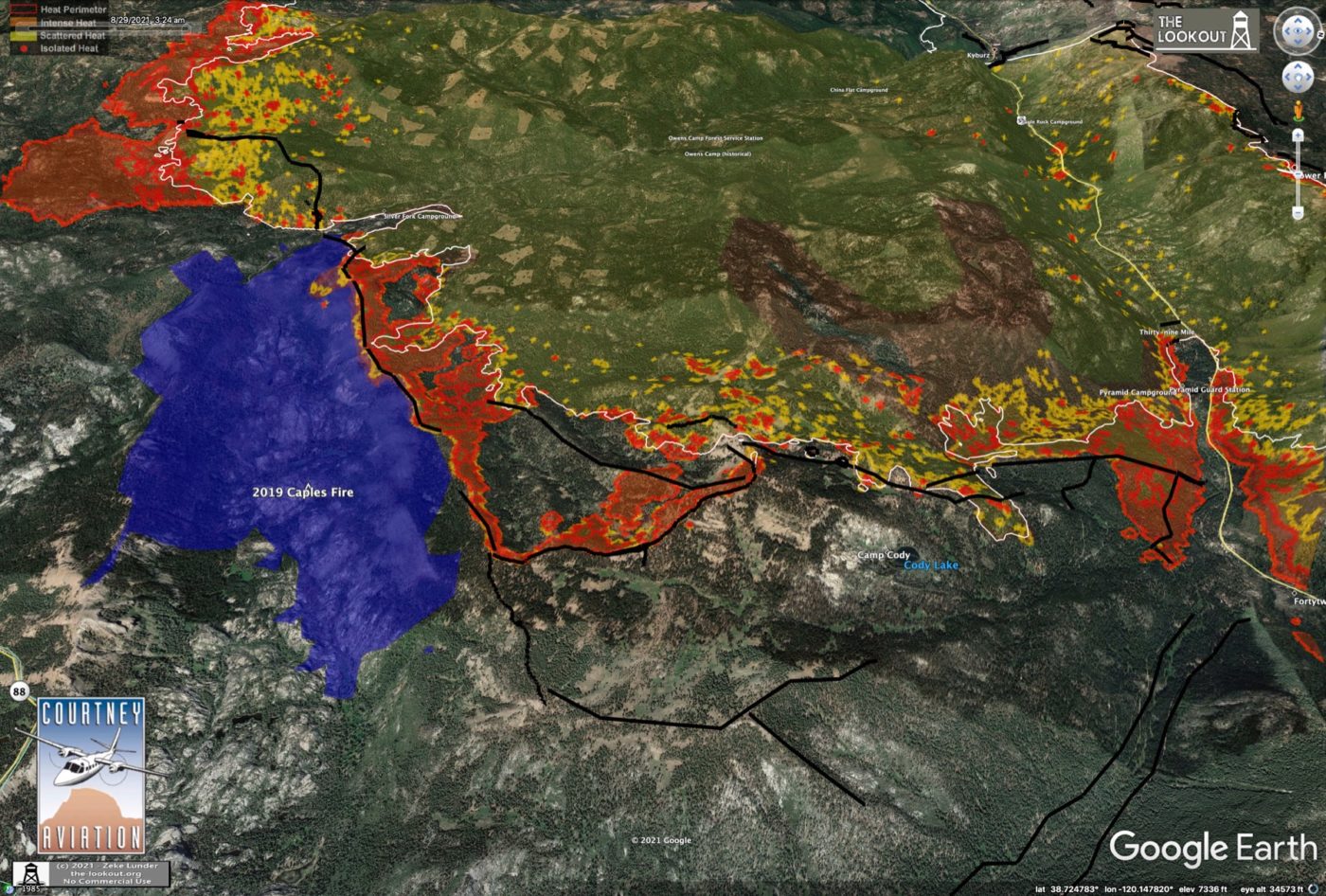 Spread continues toward the south and Silver Lake (foreground). This area of the fire is visible on the Armstrong Lookout webcam. These areas on the south of the fire are not trapped under smoke in the morning like areas farther to the north in the canyons, and burned actively through the night. You can see this on the 6 and 12 hour timelapse videos on the webcam. 2019 Caples Burn in blue.

Because a lot of our suppression resources are tied up protecting the Highway 50 corridor and communities on the northwest of the fire, the fire may be able to back actively through the Caples Burn, but is unlikely to kill many of the larger trees here. We need large prescribed fire blocks like Caples all over our landscapes if we are to have any hope of avoiding more megafire like Dixie, Caldor, Creek, Carr, Camp, Delta — to name a few of the worst from past three years. There is no fire-free option for our forests. Burn it, or watch it burn. 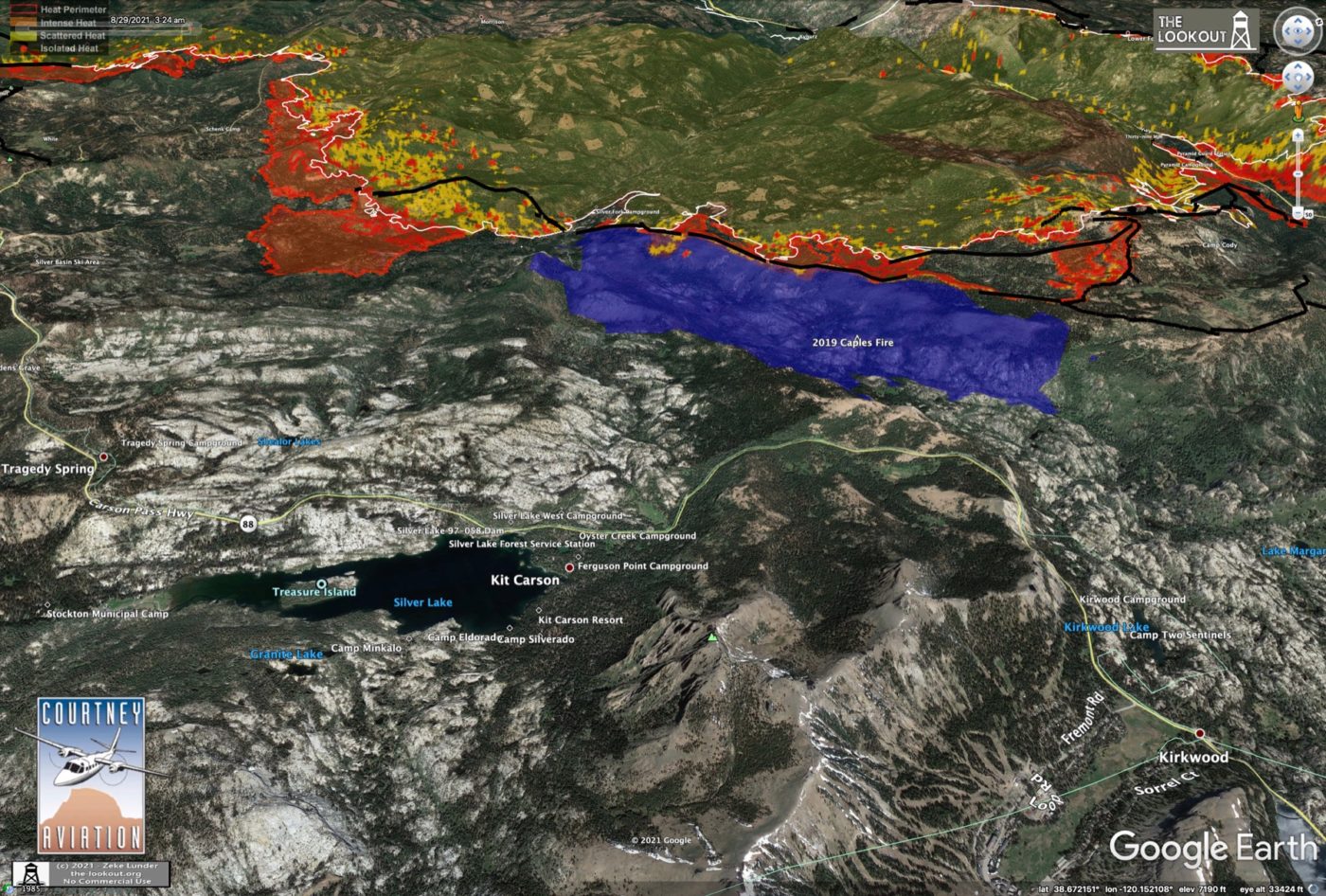 The south side of the fire was active yesterday. White line shows 28 hours of fire growth. The white shape on lower left was a large spot fire that has now grown back into the main fire. It continues to back into the Cat Creek watershed. 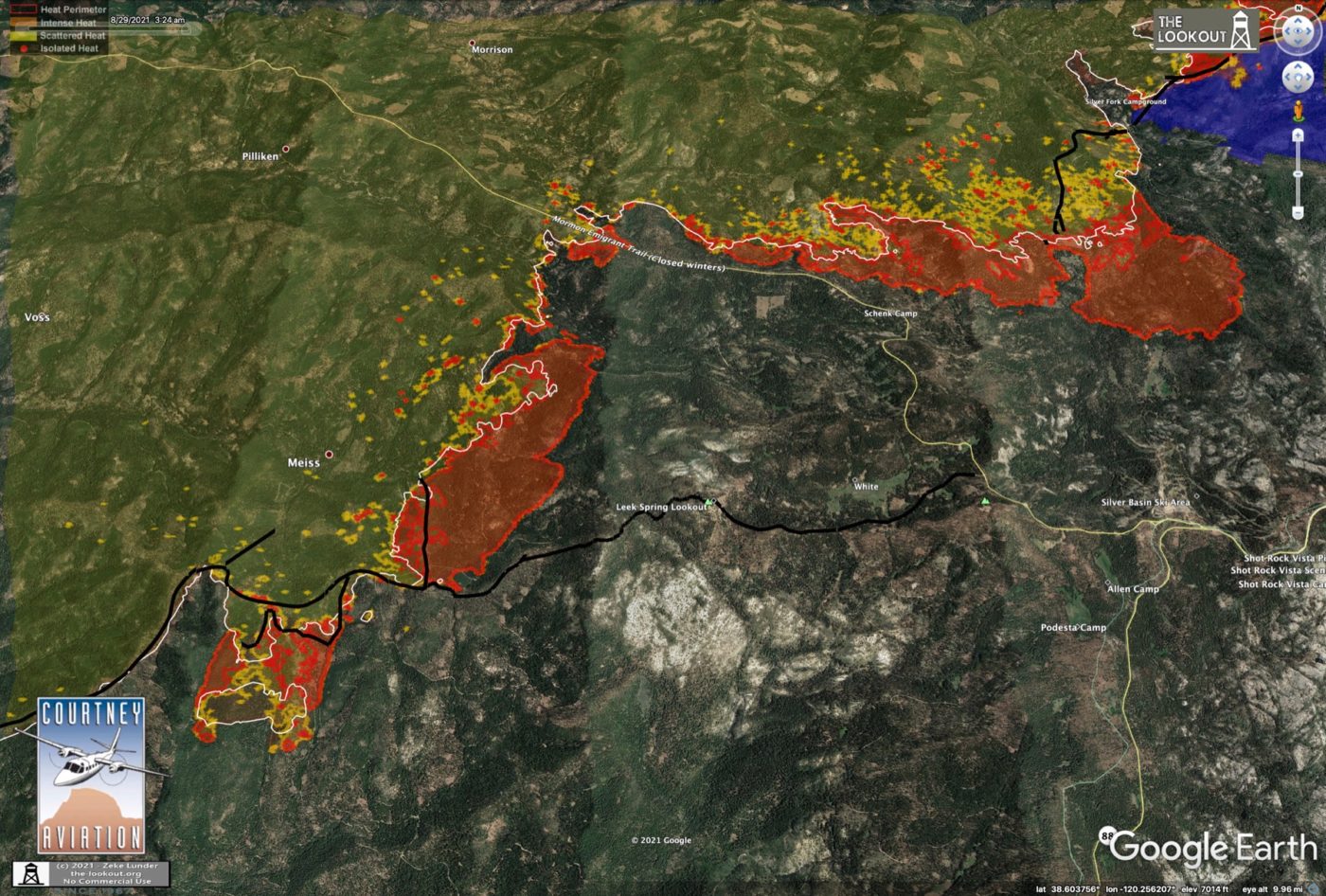 Of most concern to people living on the west of the fire, there was continued spread down Camp Creek toward Pleasant Valley and into the North Fork Consumnes River. This fire spread about 1/2 mile downcanyon. Firefighting was made difficult here due to smoke preventing air support for much of the day. Firefighters had to retreat from several areas on this part of the fire.  This view looks north. 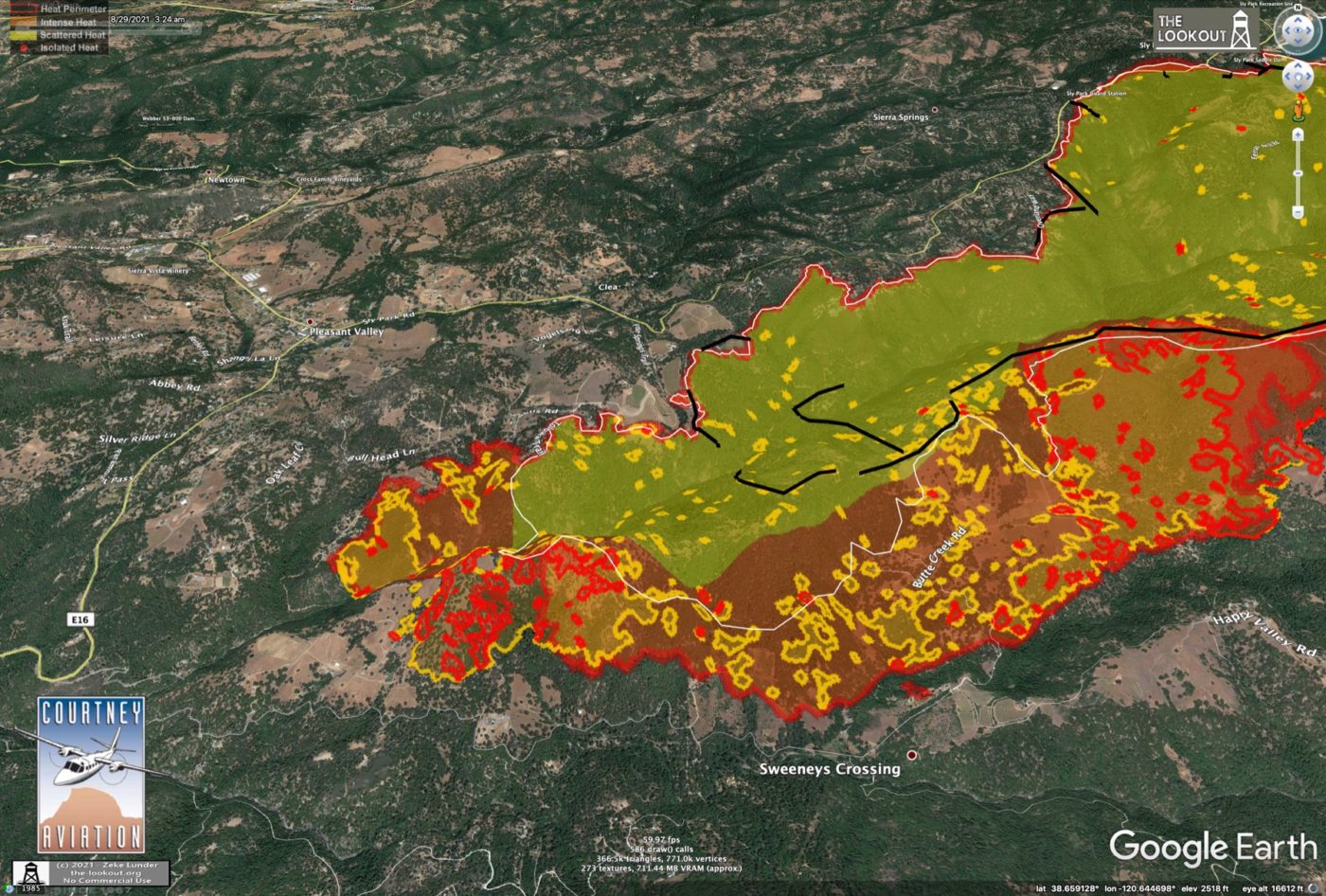 Looking east up Camp Creek, over Pleasant Valley. The flank of the fire between Eagle Canyon Road and Sly Park Dam did not grow in past 28 hours. 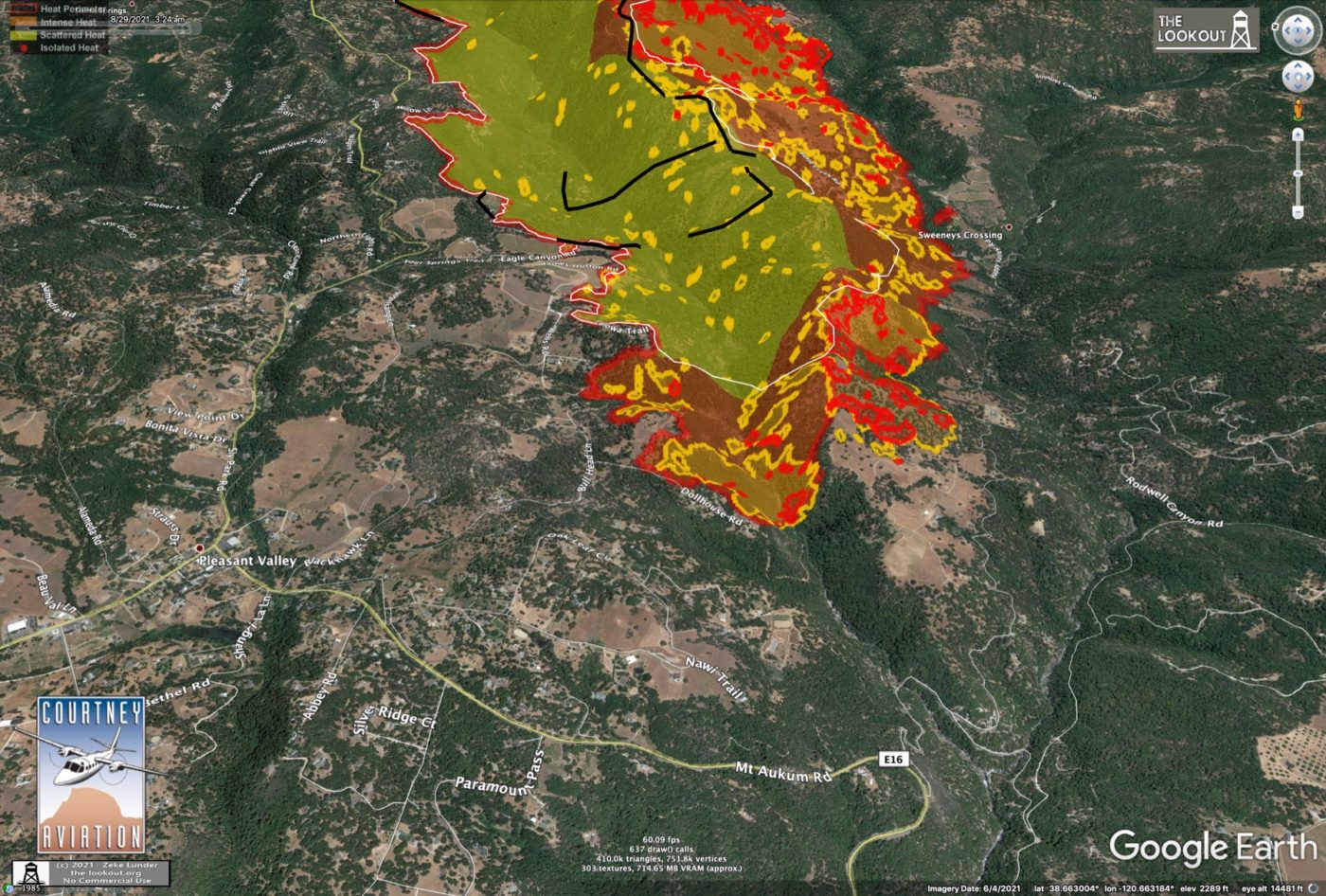 Looking southeast over Pleasant Valley. There was no new fire growth downcanyon toward Somerset on Middle Fork Consumnes River. This area continues to cool off. 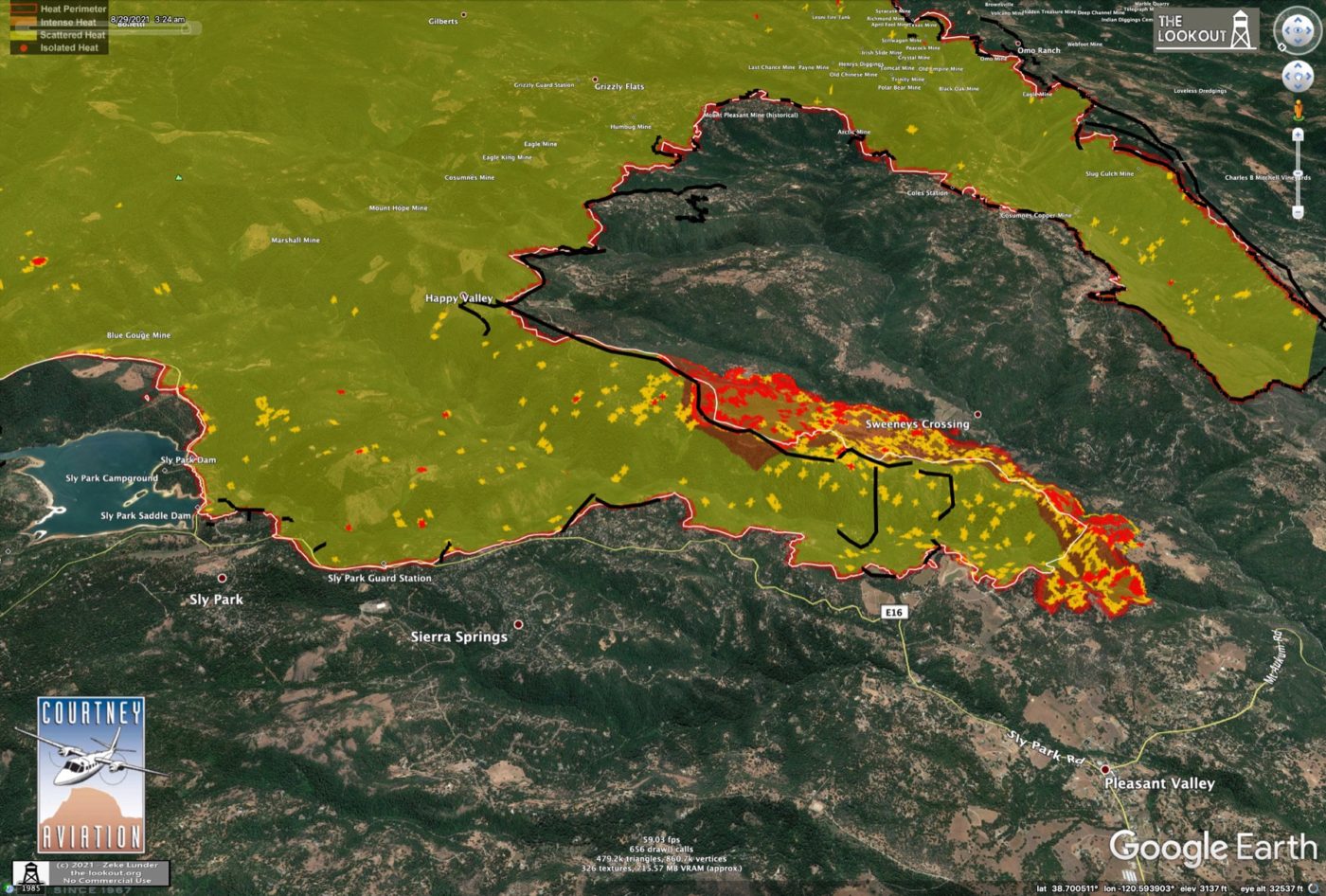 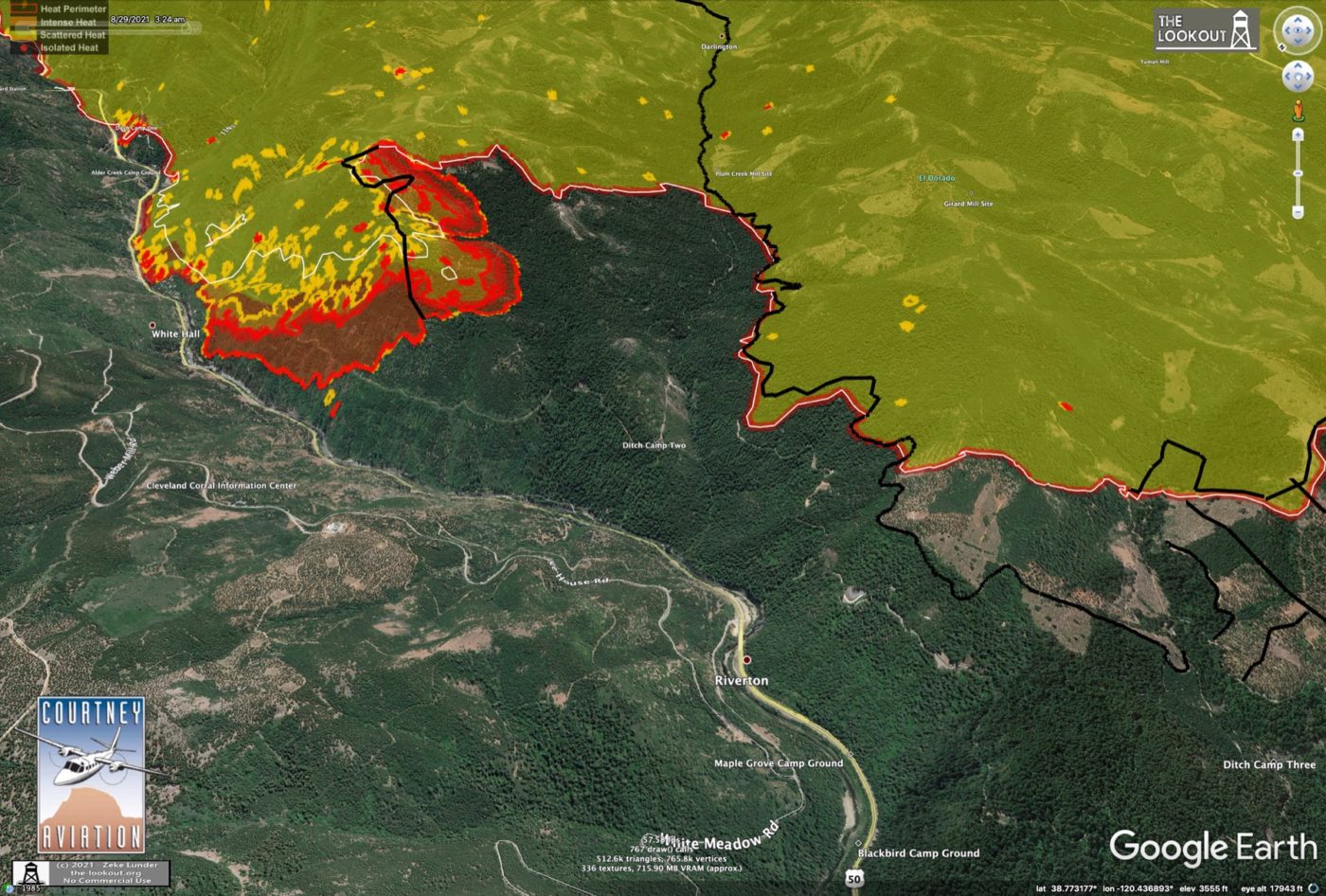 The north edge of the fire above Highway 50 spread actively about 1.25 miles upcanyon in past 28 hours, but had very little growth to the north, which is good news for people with cabins at Wrights Lake and other places north of the canyon rim. 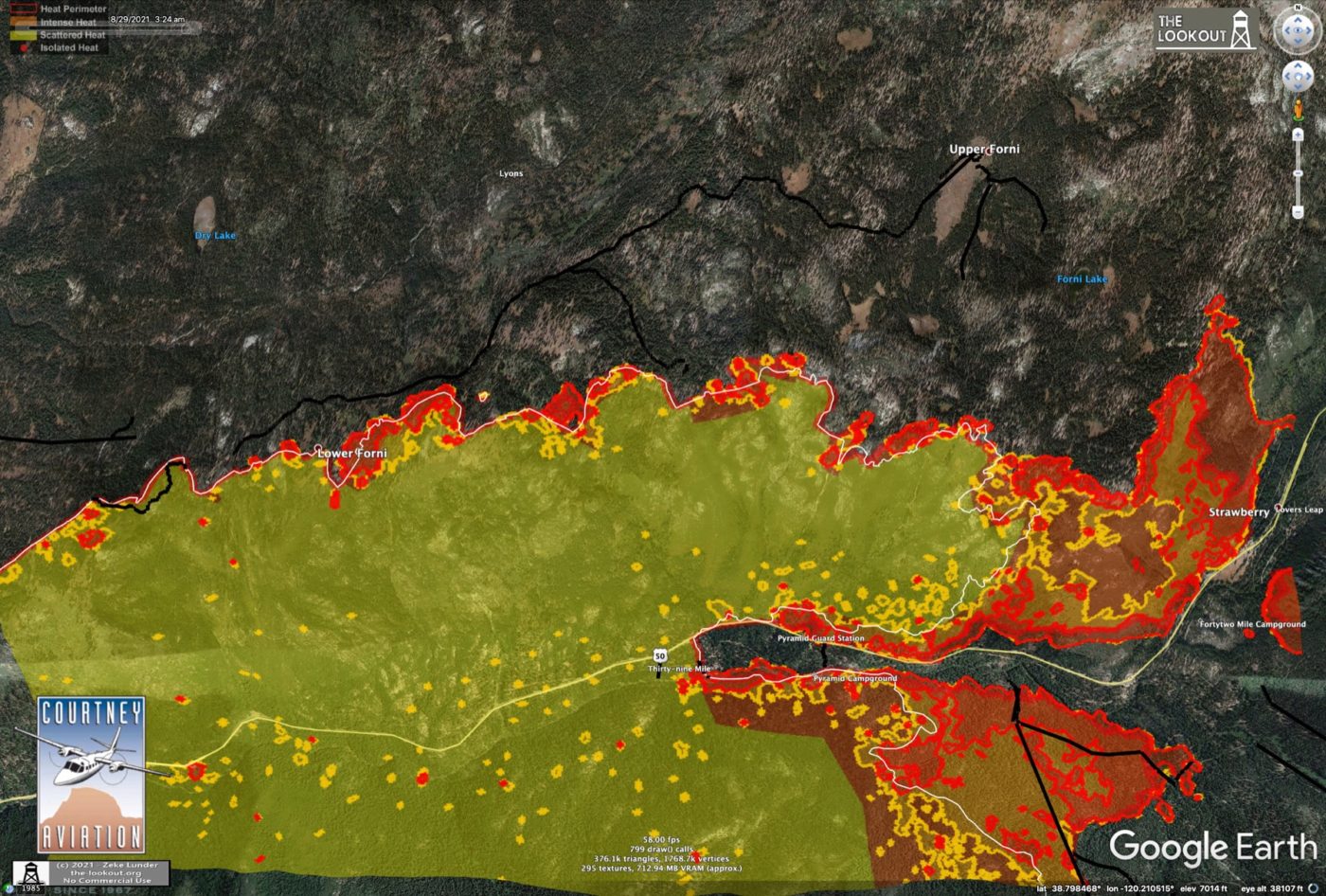 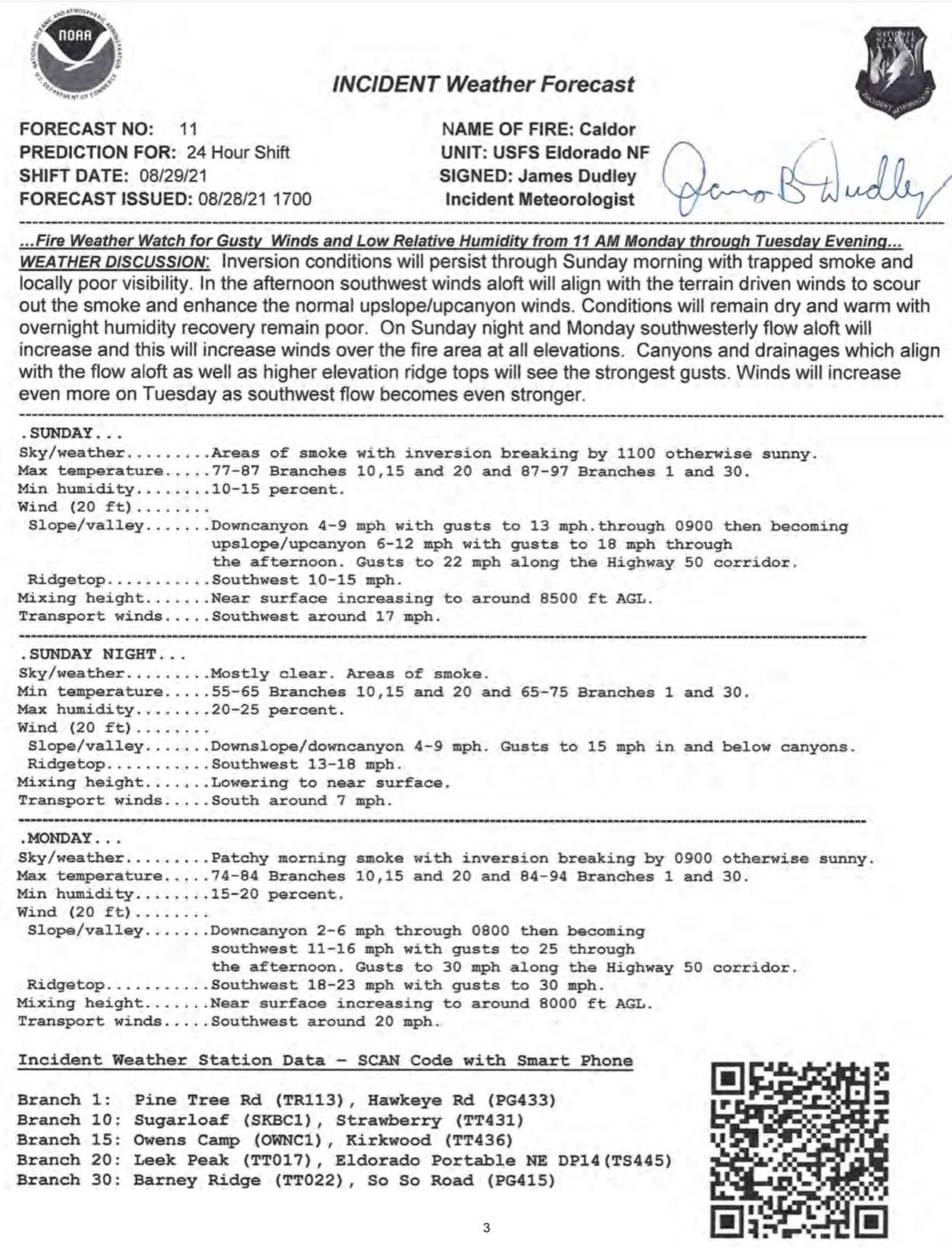 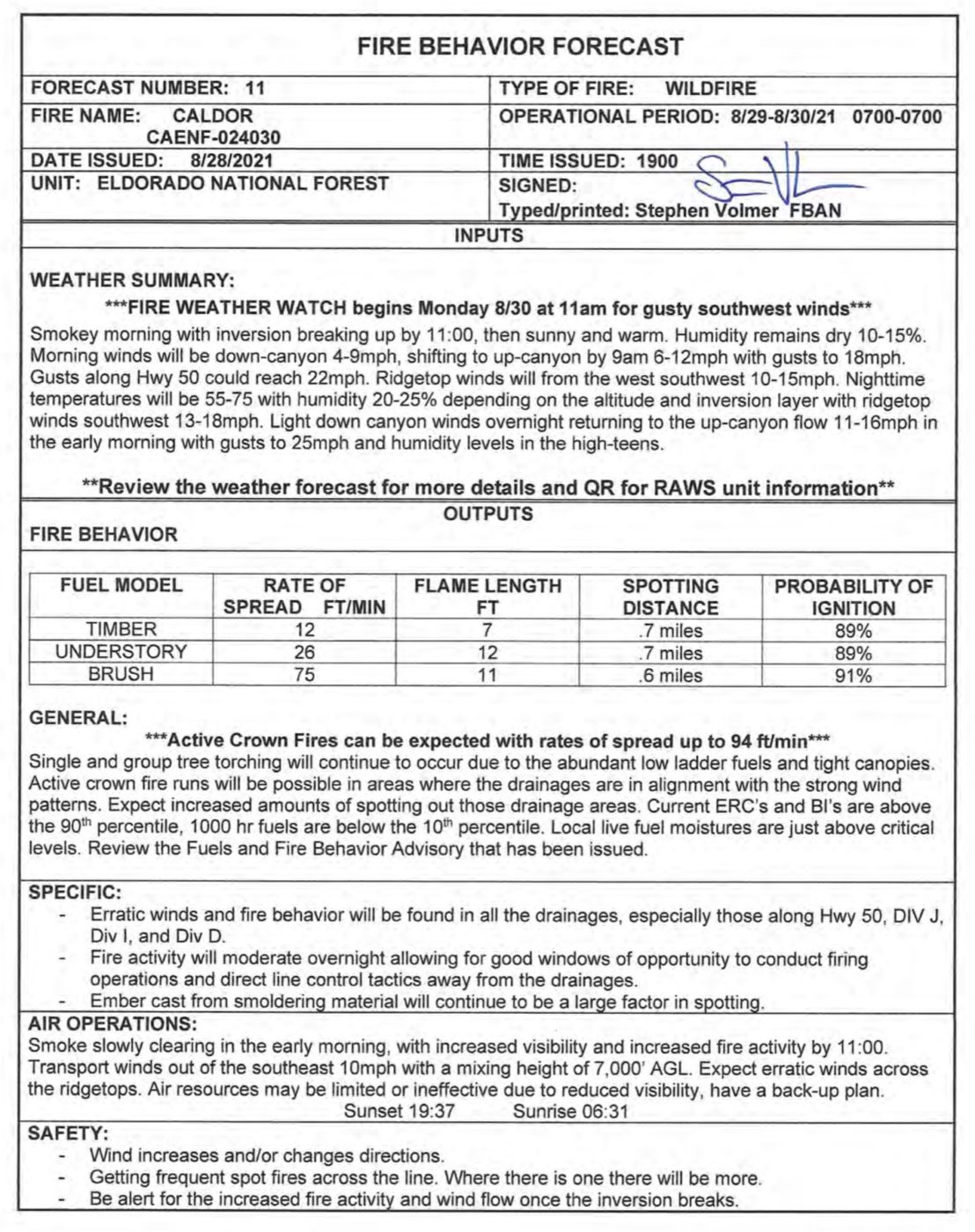