UPDATED  8/28/2021, 10 pm
Here is the situation status summary from the incident command team on the fire. These can be downloaded daily from here:

There were major firing operations along the dozer lines on the east side of the fire, and an early-morning flare up on the rim of Camp Creek, spilling into Butte Creek and North Fork Consumnes River. This happened near Tolowa Trail. At 4:40am, the fire was north of Happy Valley Road, north of Sweeneys Crossing. There was no new spread showing in the Middle Fork Consumnes River Canyon. toward E-16. Also the SE flank of the fire spread actively to the SE, near Sherman Canyon, outflanking the west end of the 2019 Caples Burn. Fire on the north side of Highway 50 spread about 1/2 mile upcanyon over past 36 hours.

For those of you following the fire on online scanners, here is a map showing today’s Divisions and Branches. 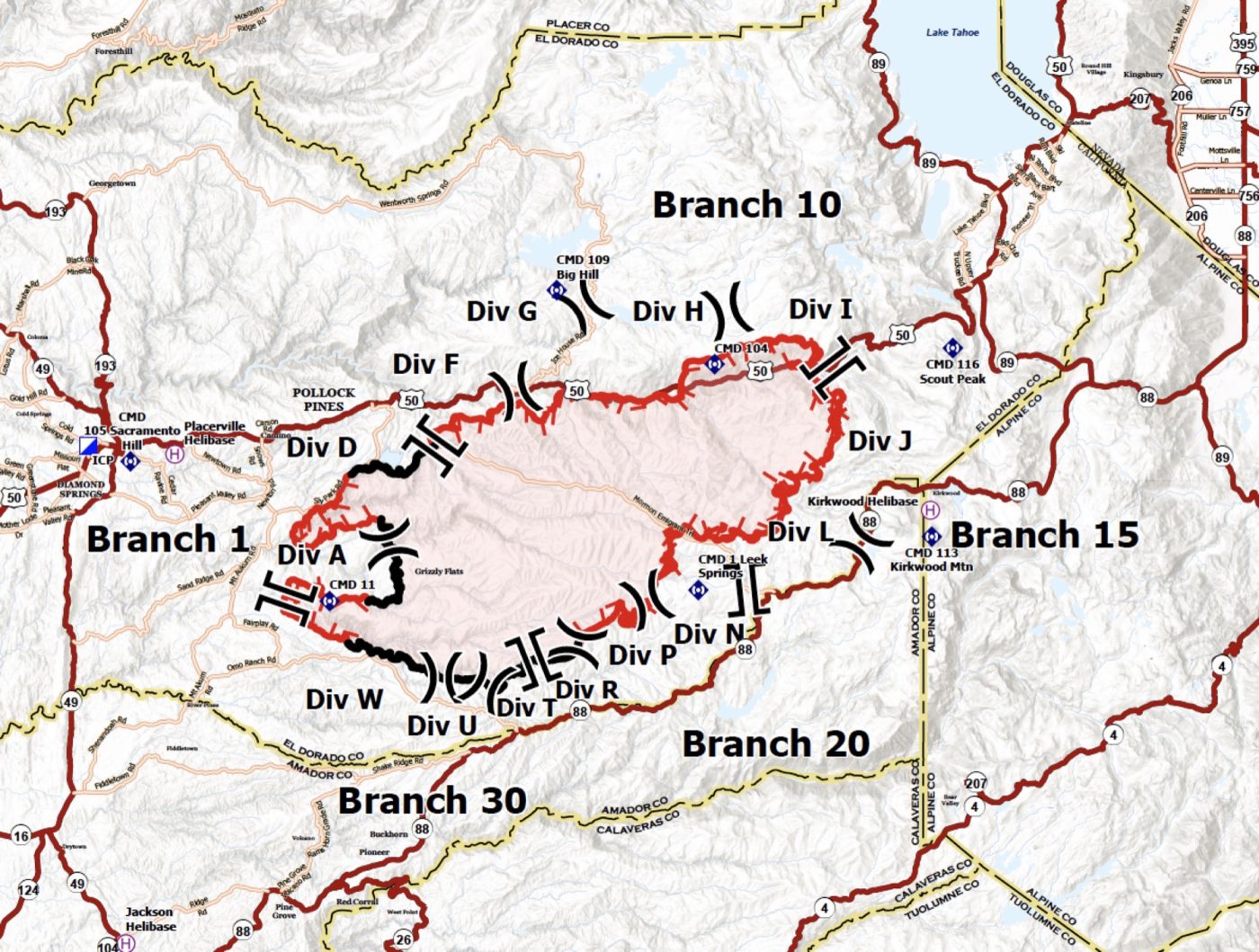 If you’d like to wade through what each Division is working on today, there is a lot of information in the daily Incident Action Plan (IAP). The IAP is published every morning, and on some fires the night shift gets a separate plan. It tells firefighters where they’re working, who they’re working for, what their assignment will be and what radio frequencies they will be using. There are also forecasts, medical evacuation information and an organizational showing chain of command. The IAP is accompanied by a map book with detailed fire maps for the entire fire. Putting this all together takes a whole team of people — the Planning Section of the Incident Management Team.

Several big things happened on Caldor overnight:
There were major firing operations along dozer lines on the east side of the fire. The southeast flank of the fire spread actively and further to the southeast near Sherman Canyon and has  outflanked the west end of the 2019 Caples Burn. And an early-morning flare up on the rim of Camp Creek spilled into Butte Creek and the North Fork Consumnes River near Tolowa Trail. At 4:40am, the fire was north of Happy Valley Road, north of Sweeneys Crossing. There was no new spread showing in the Middle Fork Consumnes River Canyon toward E-16.

Looking at this latest heat mapping, it’s hard to tell whether the firing operations on the east edge of the fire (near Cody Lake) stayed on the west side of the dozer lines as intended. I don’t have any field verification either way, so I am just posting maps as they show the situation. There could be inaccuracy in either the mapped location of the dozer lines or the IR data I’m using. These things happen. I will update this post when I have better information.

Heat mapping as of 3:45am on August 28. Bold white lines show approximately five hours spread. The lighter white line shows the previous 24 hours of spread. This map shows firing operations south of Cody Lake that occurred between 11pm and 3:45am. Black lines are bulldozer firelines. Orange and red areas have more intense heat. Yellow areas are generally cooling down.

View is looking west, over the northeast head of the fire. Kyburz is in top-center and Strawberry is in far-right. Click any map to enlarge. 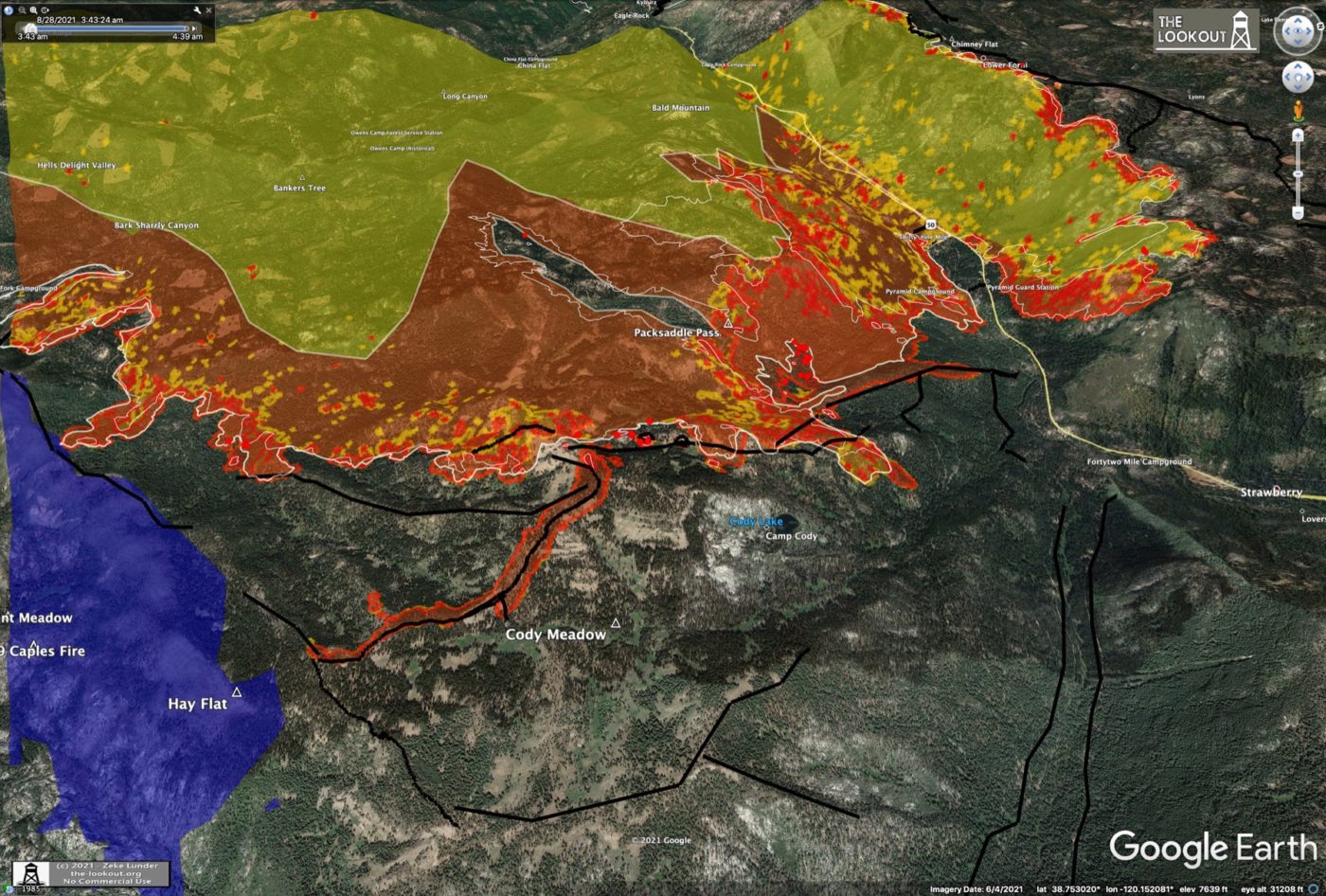 Looking west, over Cody Meadow, south of Strawberry. This map shows firing operations south of Cody Lake that occurred between 11pm and 3:45am. Black lines are bulldozer firelines. I don’t know if the dozer line or IR heat mapping is accurate in this image. 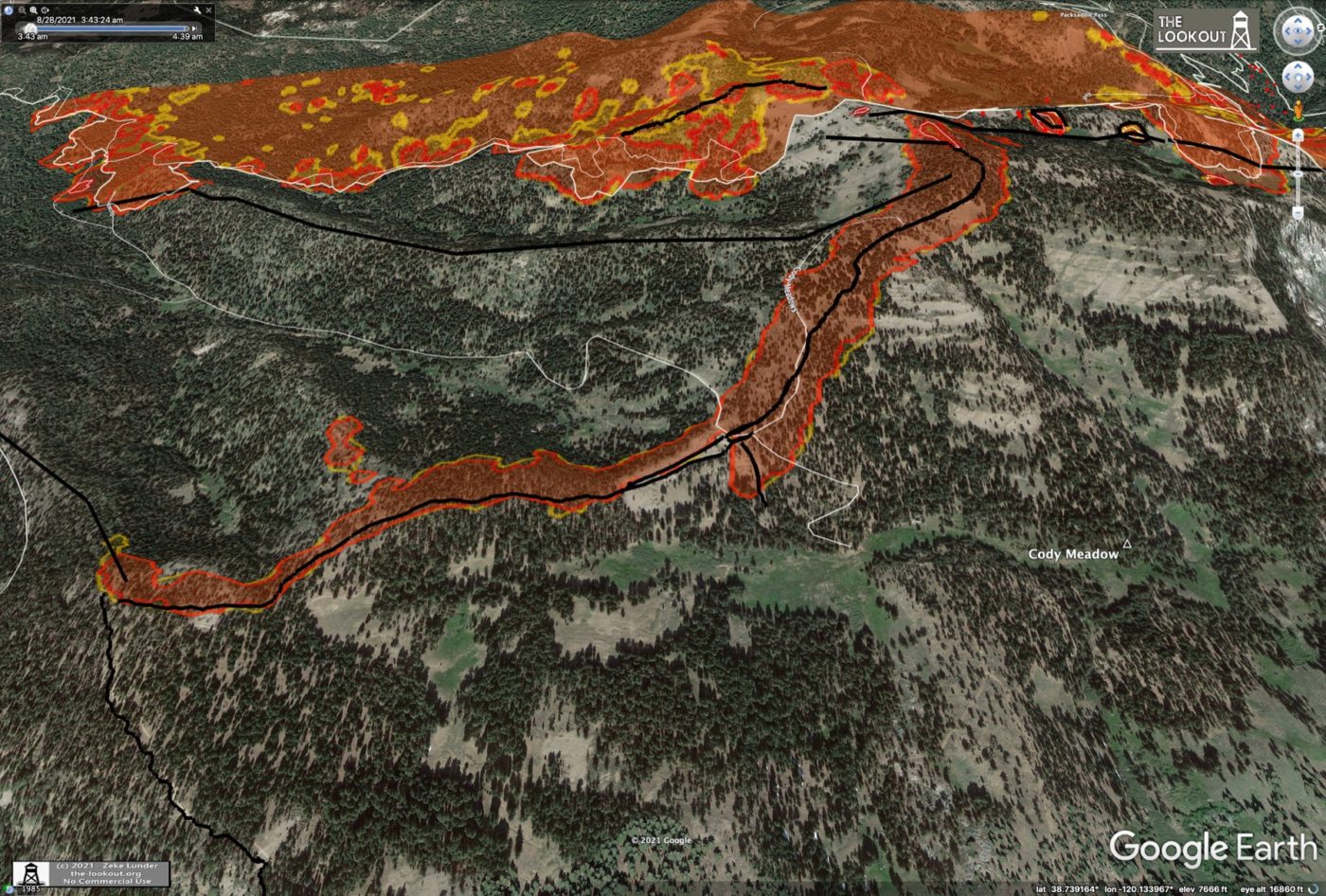 Looking southwest over Strawberry at east head of the fire. This map shows firing operations south of Cody Lake that occurred between 11pm and 3:45am. Black lines are bulldozer firelines. I don’t know if the dozer line or IR heat mapping is accurate in this image. If both are accurate, there was an approximately 20 acre ‘slopover’ where the fire crossed the line. Also, this image shows a slopover on a section of fire (left of center in this image) that crossed the dozer lines two days ago, but which had been held in place with aggressive firefighting. I’ll update this post as I get information on whether or not fire crossed the lines. 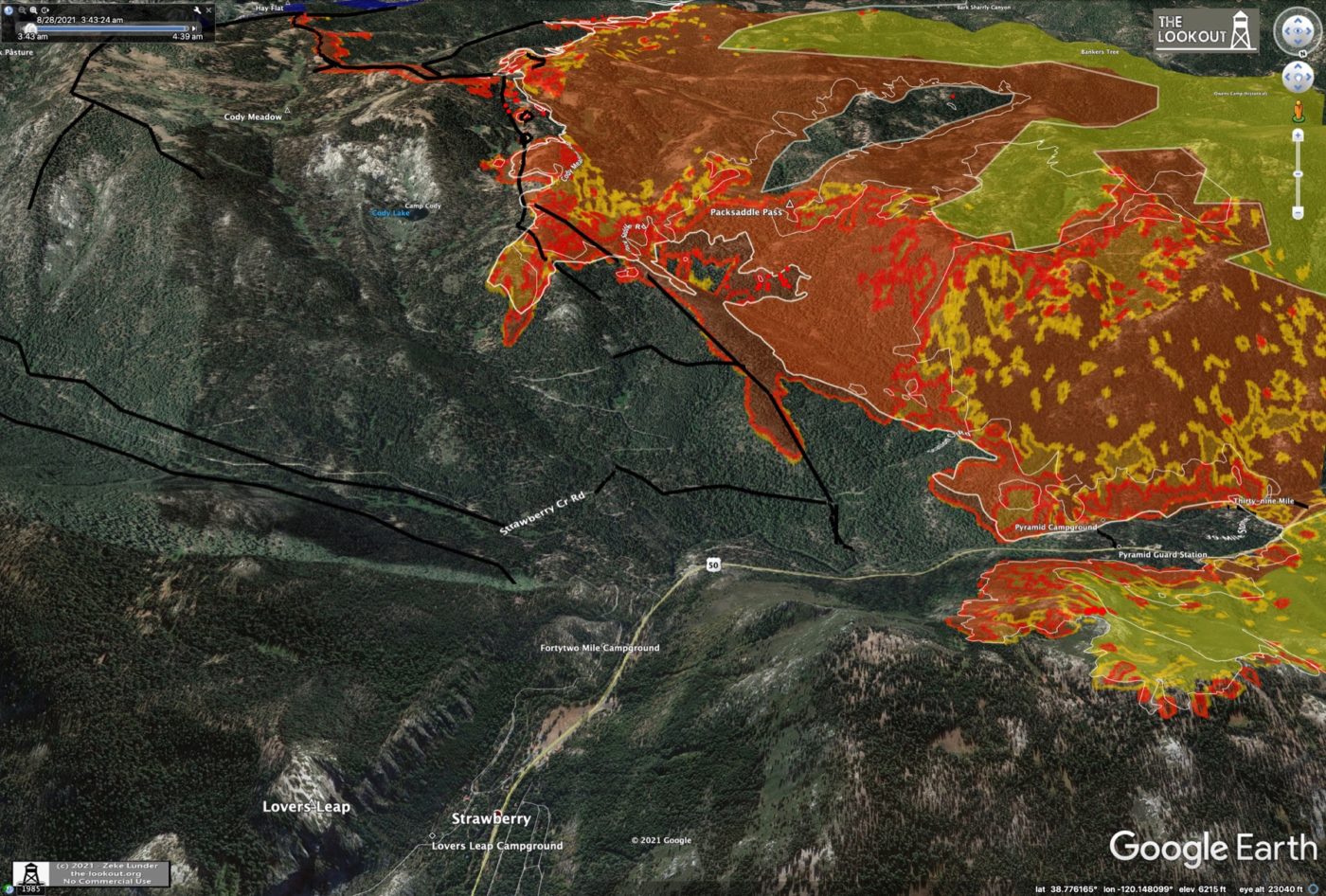 Big picture view of the east head of the fire, looking west. We don’t see much spread east on the north side of Highway 50. The slopover on dozerlines (white outline) in the lower center of this image has been holding for two days before this image was taken at 3:45am on August 28. Orange and red areas have more intense heat. Yellow areas are generally cooling down. 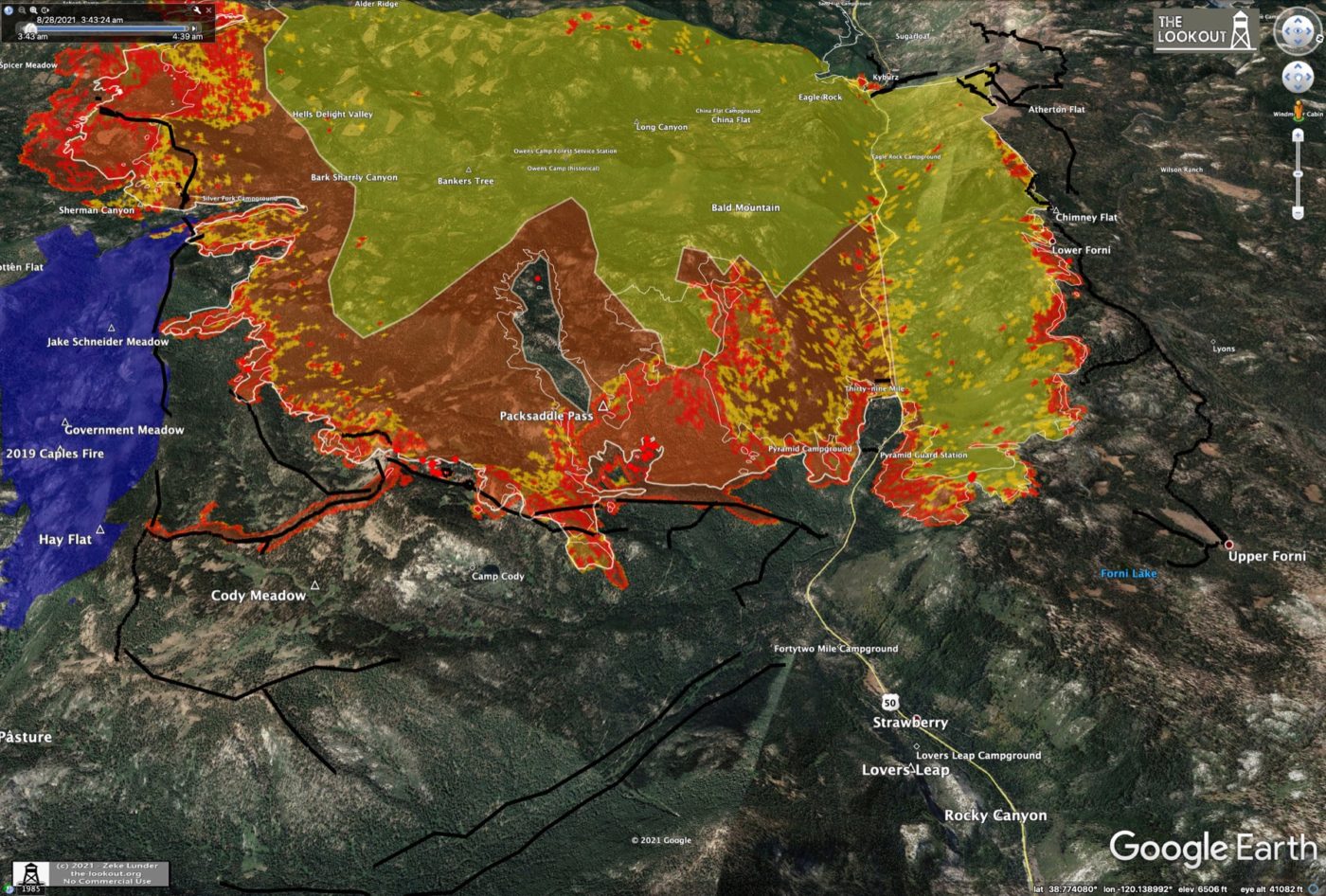 Looking NE over the SE flank of the fire. Mormon Emigrant Trailer is in lower center, Highway 88 and Silver Lake on right. There was significant spread to the southeast overnight. The first white line in from the edge was fire’s location at 11pm, August 27. Red perimeter is about 3:45am, August 28. Lighter white line in from edge is 24 hours fire growth before 11pm, August 27. Caldor has now outflanked the 2019 Caples Fire and is spreading toward Highway 88. 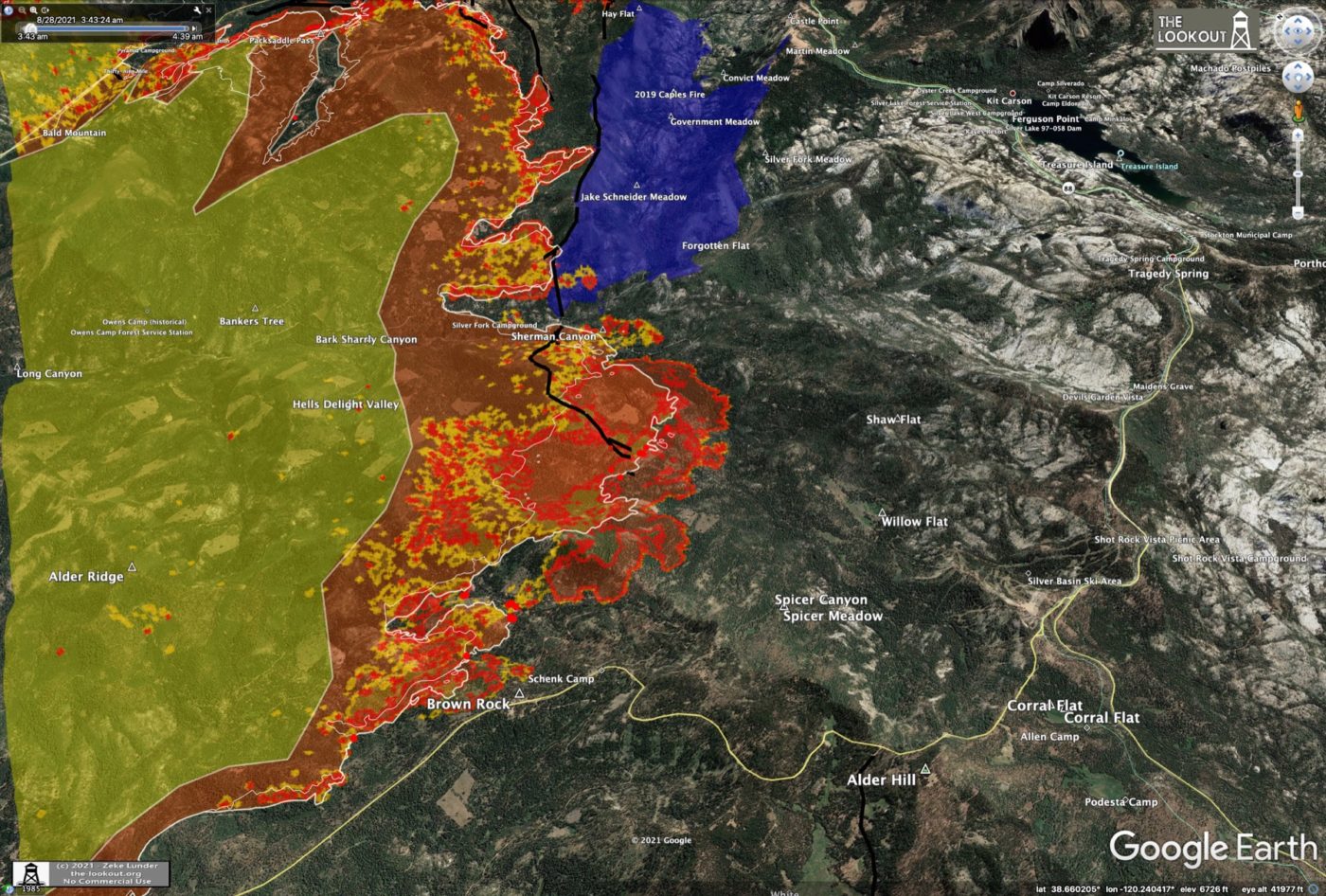 Farther west on the SE flank, looking NW, there is a large spot fire into the Cat Creek watershed, east of Telephone Ridge. 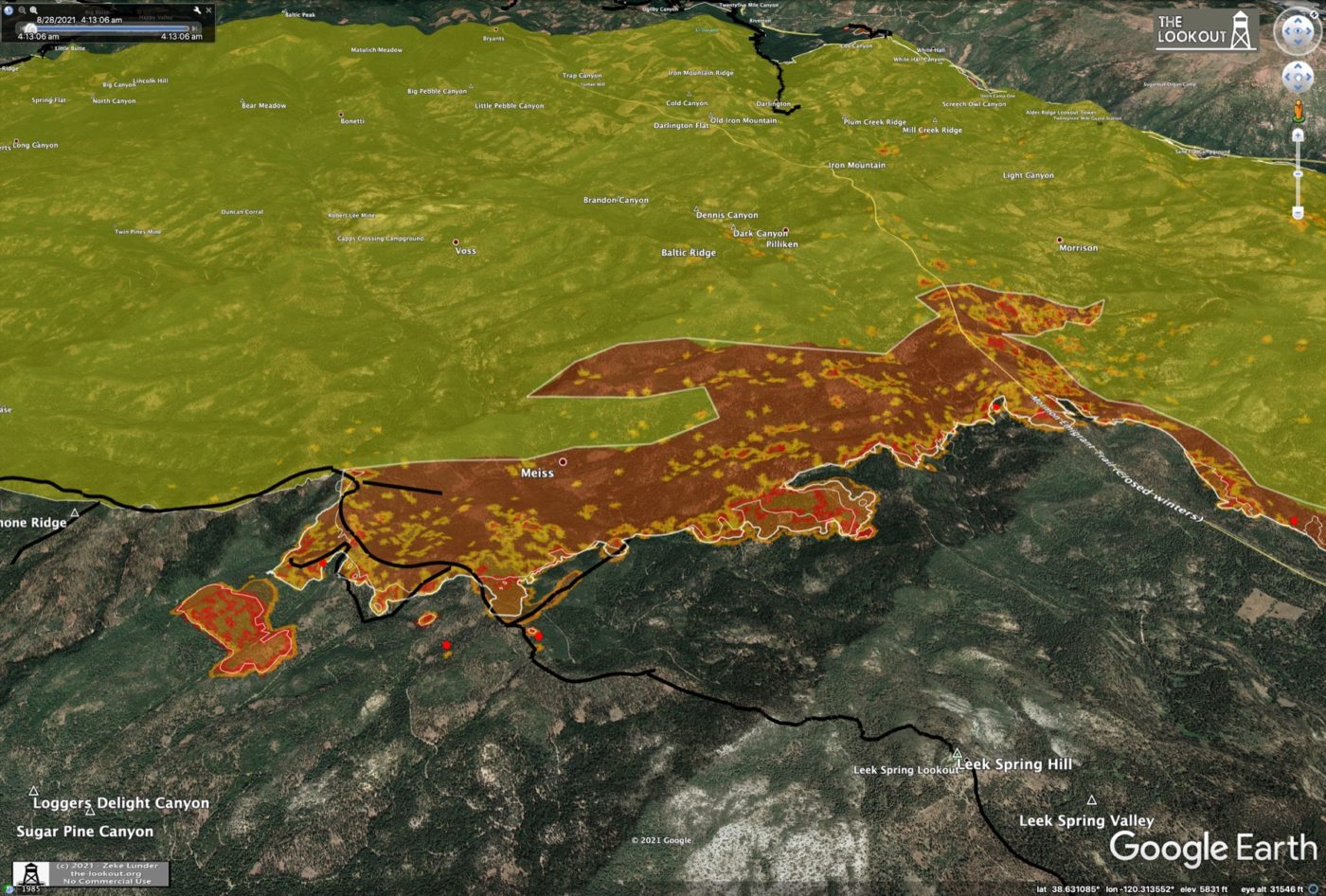 For people living on west side of the fire, the big story is continuing spread out of Camp Creek Watershed into the North Fork Consumnes River drainage. Fire has spread about two miles downcanyon in past 30 hours. This heat imagery was captured about 4:40am on August 28. Heavy smoke kept helicopters and air tankers grounded for much of yesterday, and most of today will also probably be too smokey for air support. This takes away one of our key tools for controlling the spread of fire in these problems areas. View is to the east. Sly Park Lake in upper left, Pleasant Valley just off screen to lower right. 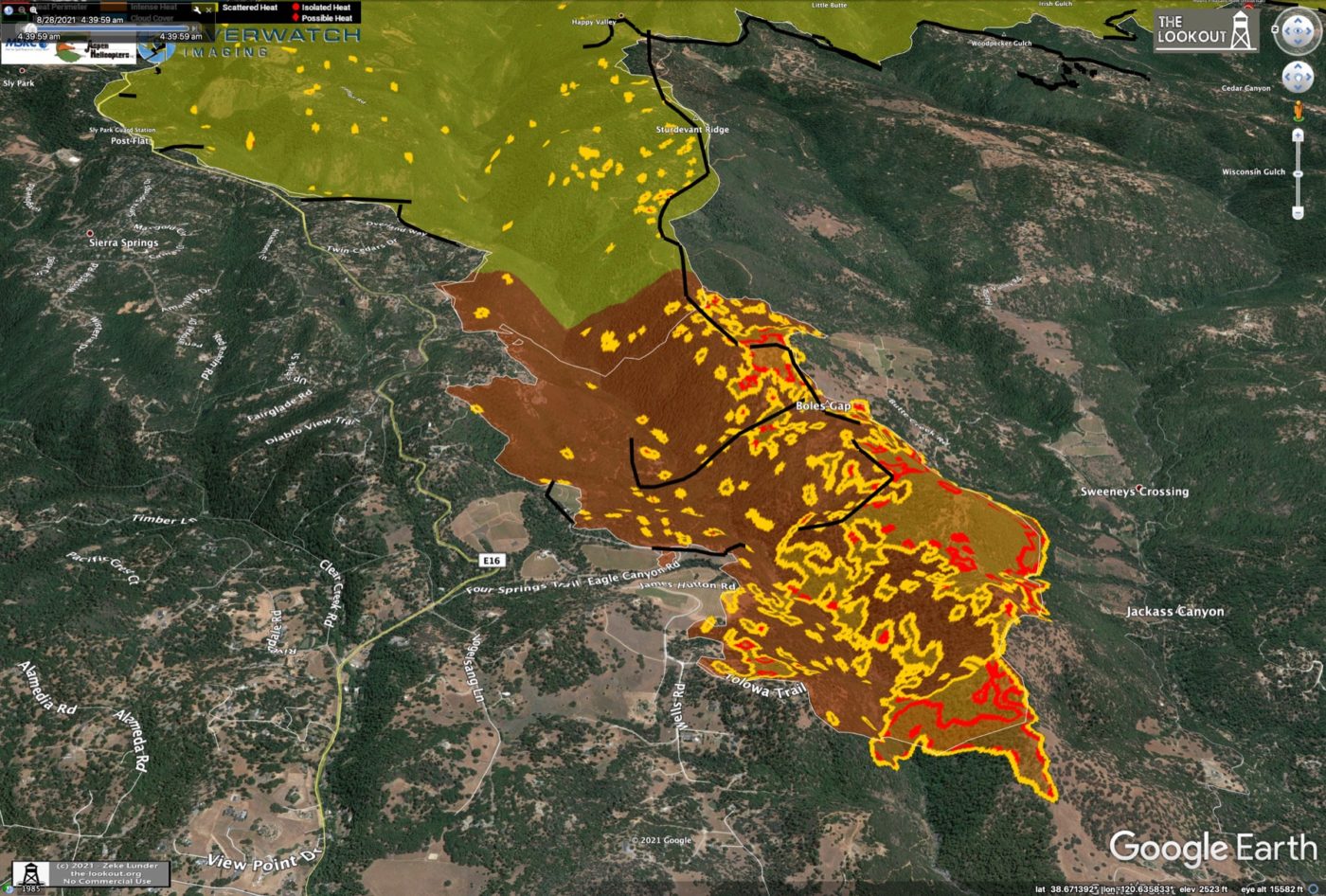 View to the east over Pleasant Valley and Somerset. There was no new spread downcanyon in the Middle Fork Consumnes River drainage toward E-16. There is bulldozer fireline all the way around this corner of the fire (black lines). 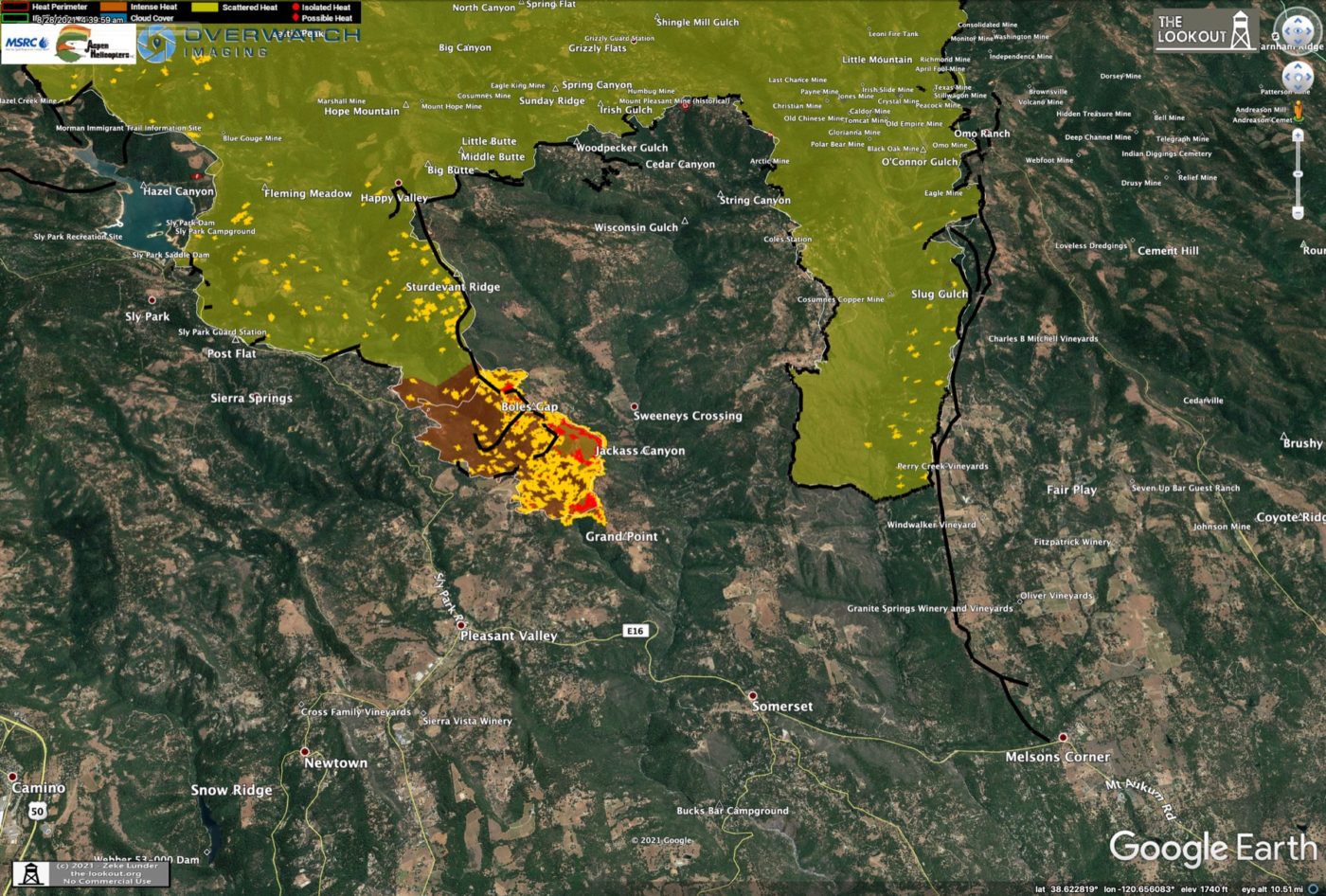 Coming around to the Highway 50 side of the fire, this view looks southeast over White Hall. The fire continues to spread downhill slowly. We call this ‘backing fire.’ Many of the larger trees will likely survive this lower-intensity kind of fire behavior. Also, heavy smoke in the canyons reduces the number of hours in each day that the fire can really breathe, further reducing the fire intensity. Often, backing fires in canyons have the exact same effects we aim for when we light prescribed burns. 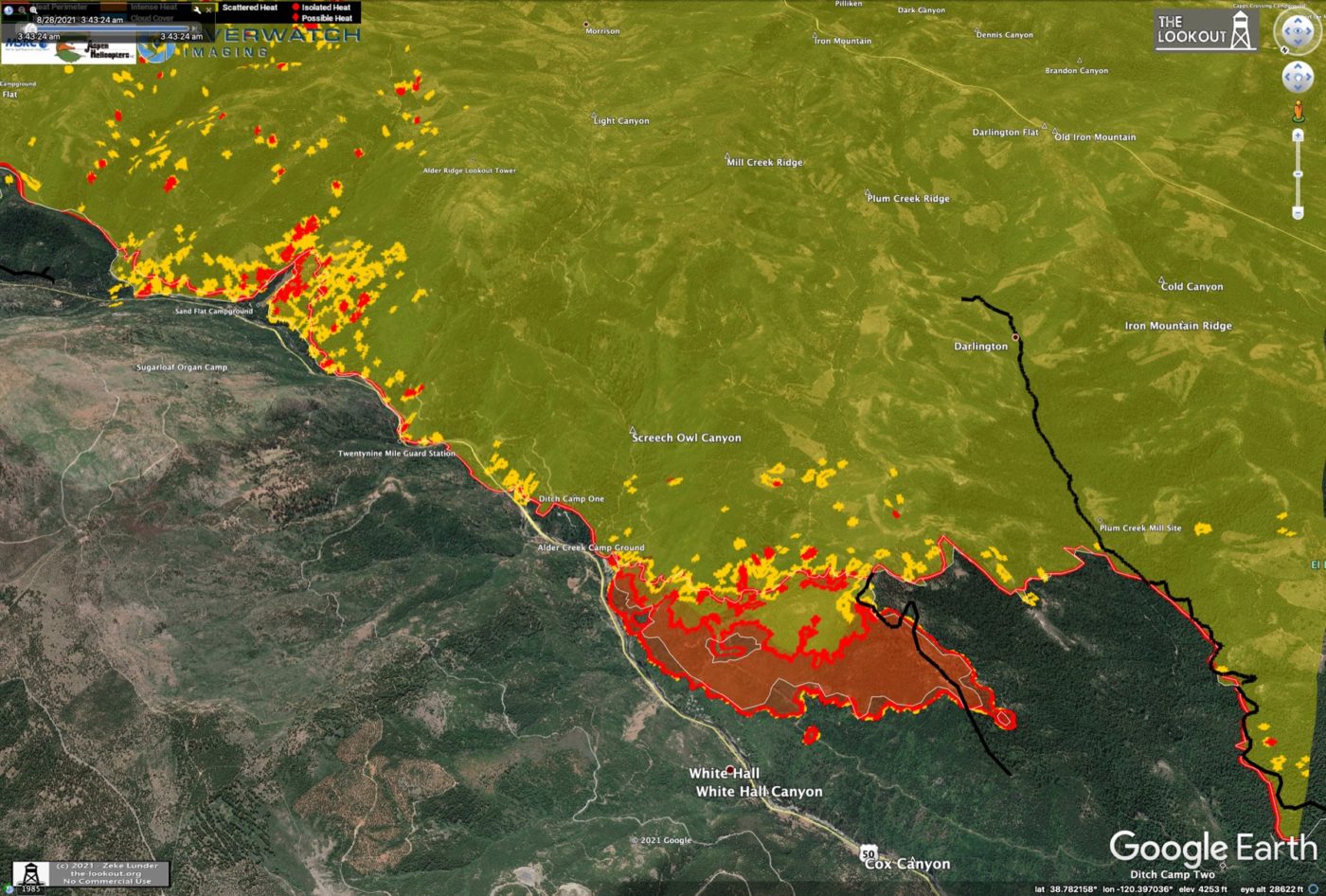 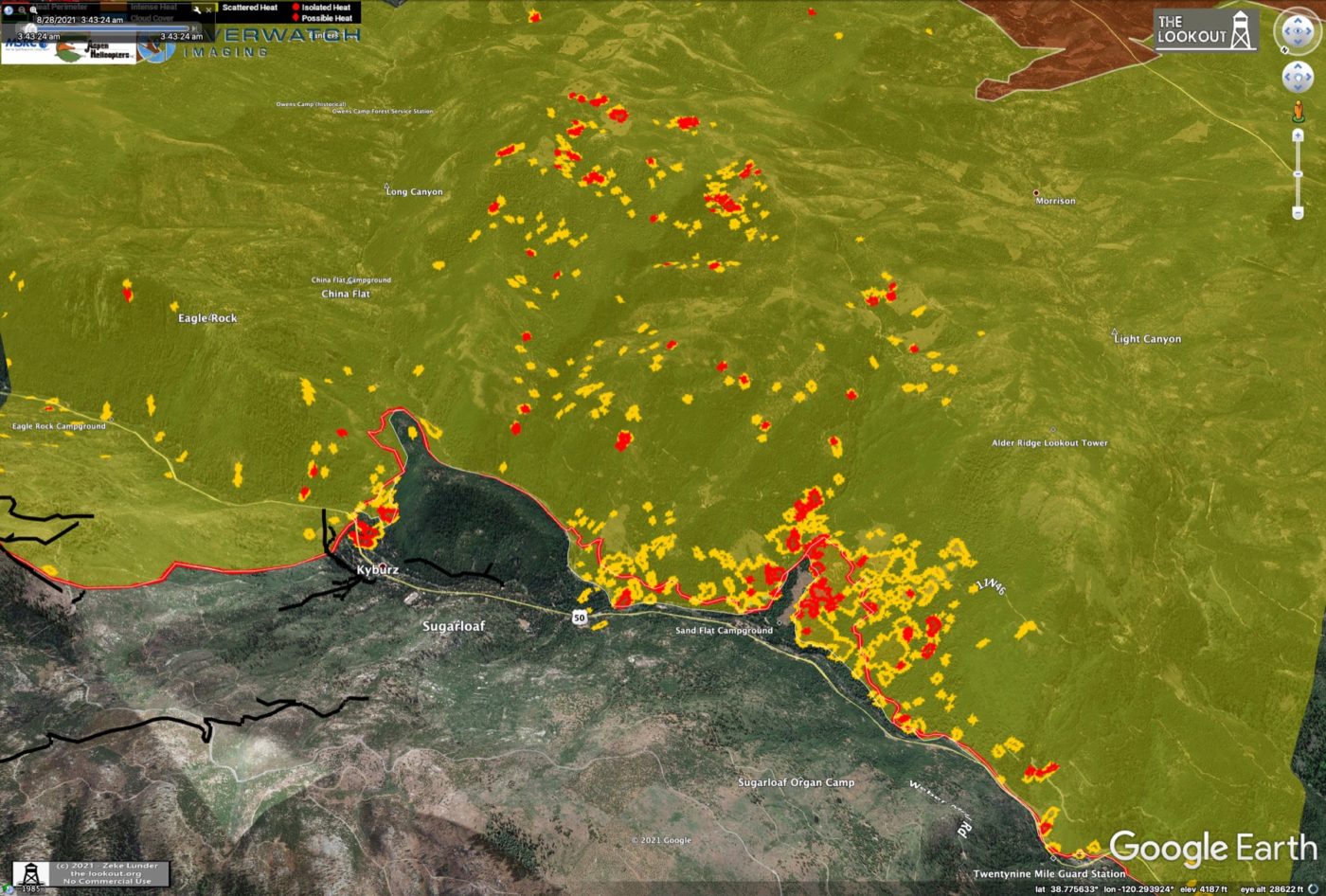 There is still a bit of heat on the uphill edge of the finger of fire that has been burning on north side of Highway 50, east of Kyburz, but no major growth uphill here in past 30 hours. The fire spread about 1/2 mile upcanyon in 30 hours before 4:45am, August 28. 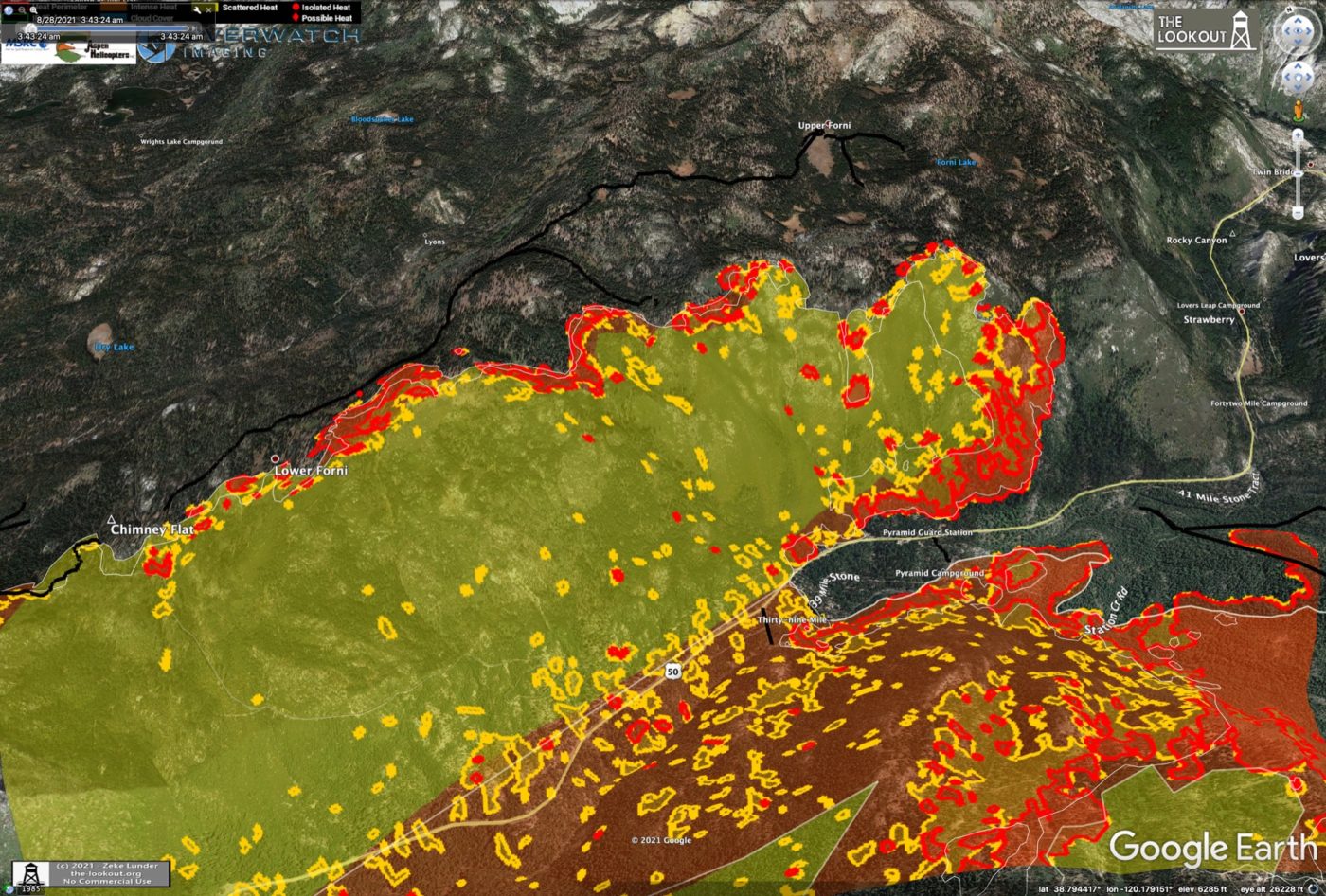 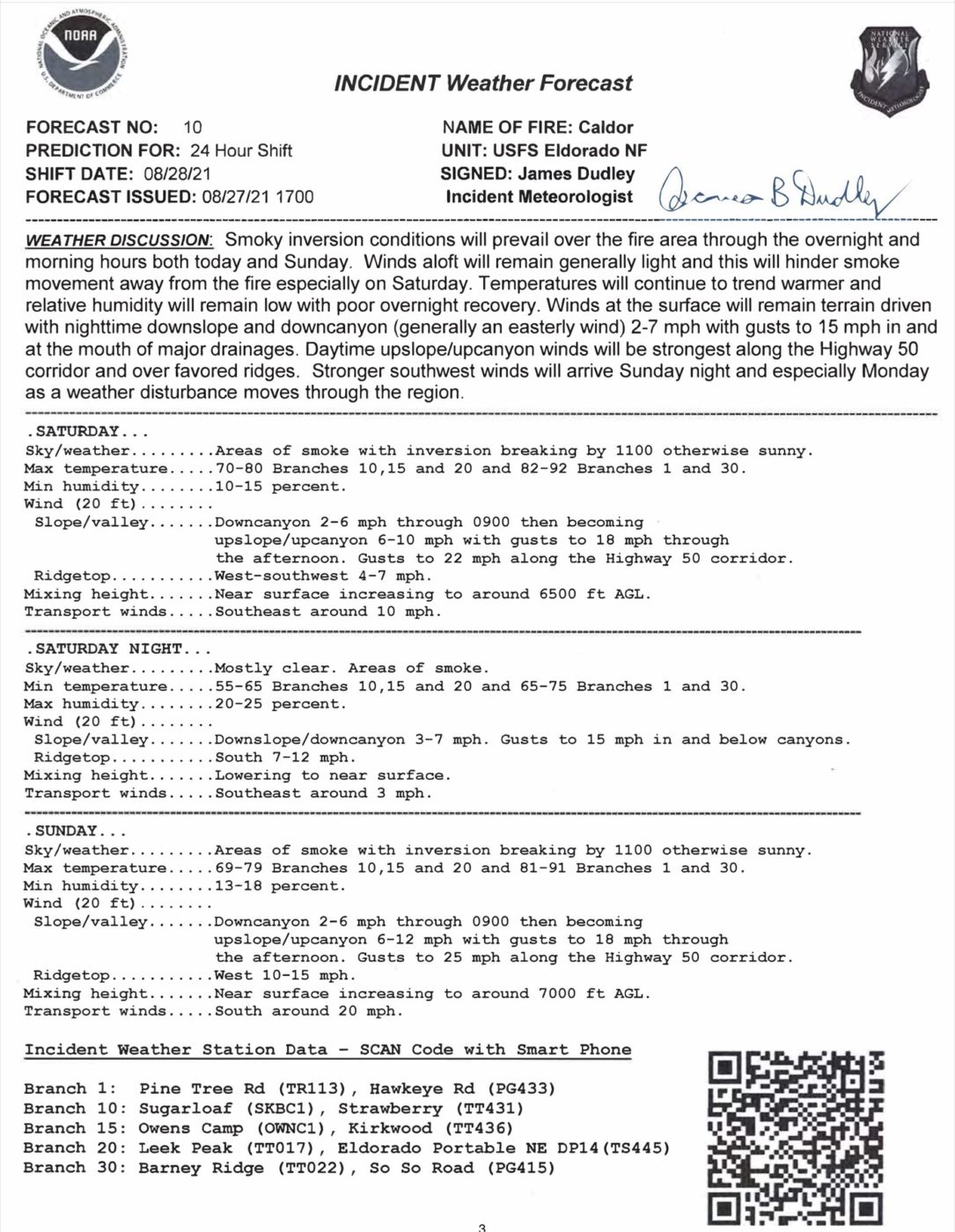 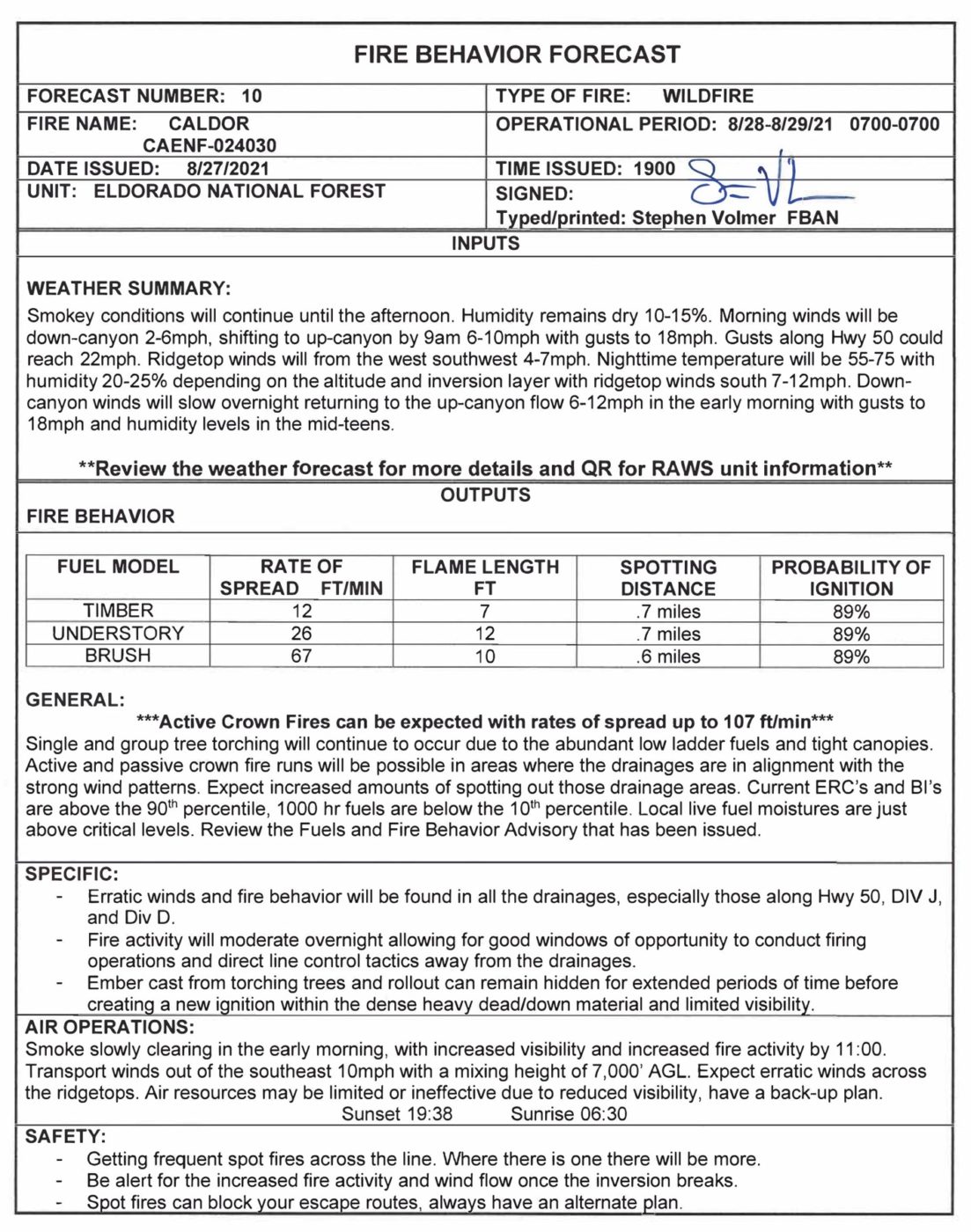