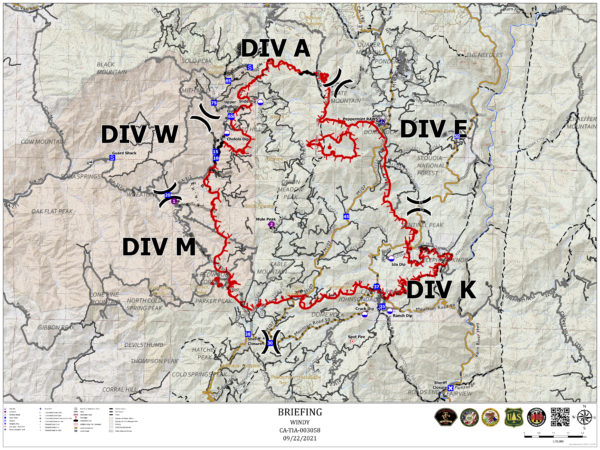 Maps and Captions by Ryan Stephens with commentary by Chuck Ervin

Ryan Stephens: IR was back in the air last night and today we have the maps to prove it!

So far, the fire has reached into five giant sequoia groves: Red Hill, North Peyrone, South Peyrone, Long Meadow and Cunningham. The fire has reached the Black Mountain Grove, which as we see on the map, burned in the 2017 Pier Fire and has had Rx treatment in the area of interface with the Windy. Feeling optimistic about effects on the groves. Preliminary reports are favorable and SQF video briefing last night reporting minimal impact to big trees in The Trail of 100 Giants within the Long Meadow Grove.

Fire continued to spread to the west, most notably in the SW portion of the fire. Areas to the NW of the 2016 Meadow fire footprint saw the largest spread overnight, with short range spotting into the Tule River Reservation.

Below is an overview of the fire. Looking north from the south end of the fire. White lines show fire growth over the past 24 hours. 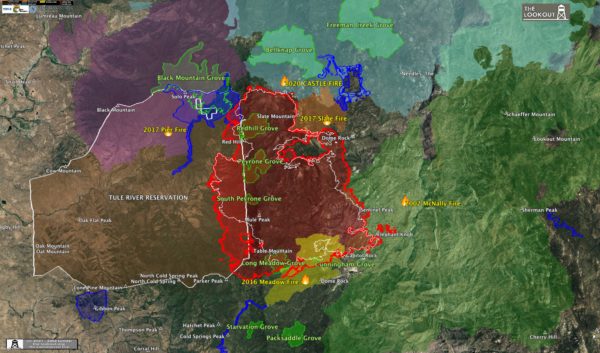 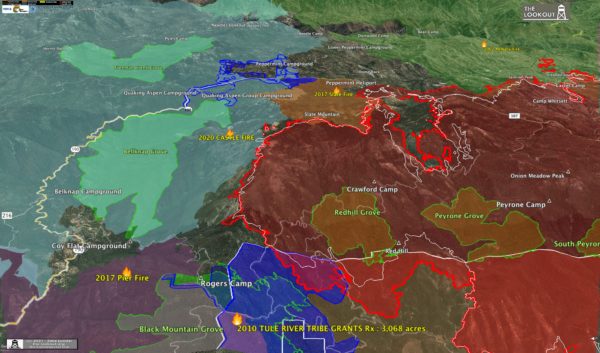 Chuck Ervin at 6:30am on September 22:
Very hot and dry through the day on Tuesday, September 21. More resources are coming in.  Lots of equipment moving down from Woodlake over to Johnsondale.  Major spread and increase in fire activity on the southwest portion of the fire.  Per the IMT’s public briefing, the Lookout Tower on Mule Peak did catch fire and was lost.  From there the fire worked down into Kessing Creek, where slope reversal gave the fire momentum for the climb up to Parker Meadow. Here we should see some slowing of the fire due to several meadows in the area, however spots on the west face of Parker Peak are concerning.  On the flip side, it would be better for the sequoias at Redwood Corral if the fire would back down from those spots rather than run with the main fire from below. Though formidable, growth of the fire around Long Meadow, Trail of 100 Giants, Capital Rock and Slate Mountain, has been slow.  For my time constraints I will not be commenting on these areas for now.

Looking north from the M-50 road at Parker Meadow. 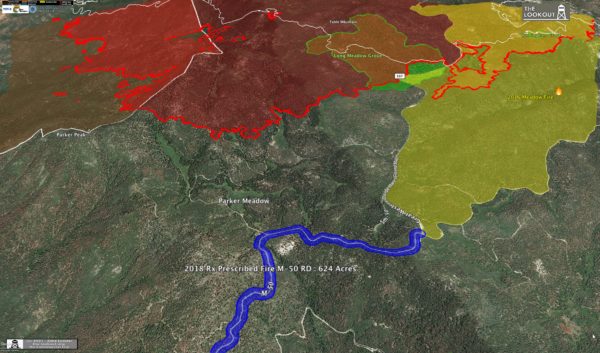 Looking east from Johnsondale at yesterday’s fire spread on the southeast side of the fire. Short range spots established to the east, pushing the fire closer to the Kern River drainage. Last night’s briefing explained how fire personnel were able to direct the fire around Johnsondale. 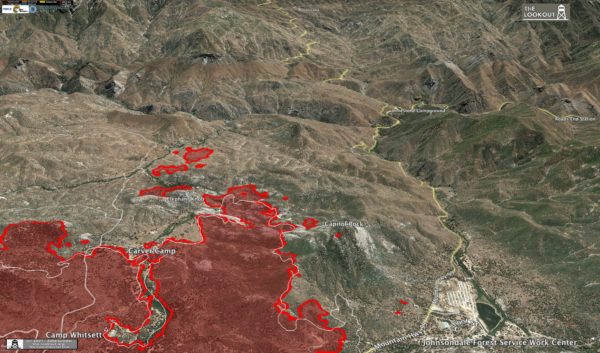 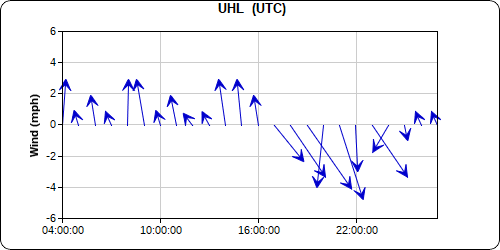 Very high temperatures and low humidity observed at the same location, in alignment with the north wind.

Today’s temps down 3 degrees with ridge winds up to 15 mph.

Additional aircraft tasking put N3832K over the KNP Complex earlier in the evening. Growth has slowed to multiple fingers extending past previous the perimeter at points all along the line instead of the entire perimeter advancing. Bands of intense heat are narrower compared to previous maps. 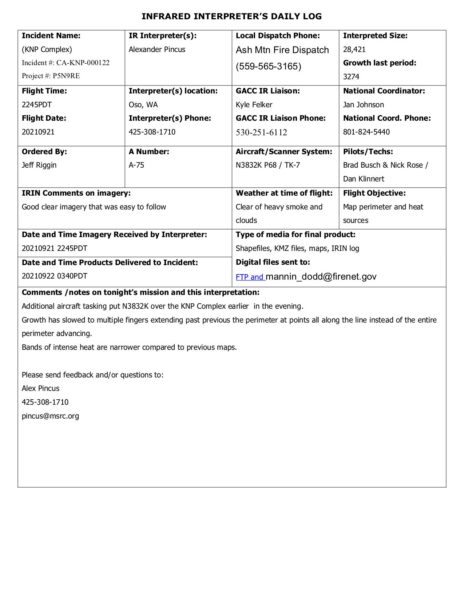 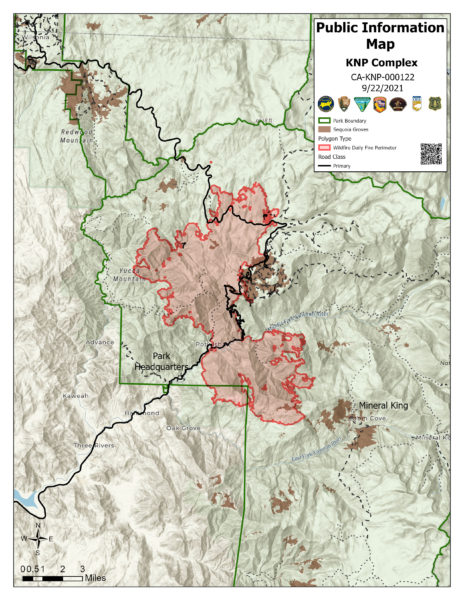 Ryan Stephens: Overview of 24 hour fire growth looking east. Fire continues to spread in the northwest and southeast sides of the fire. 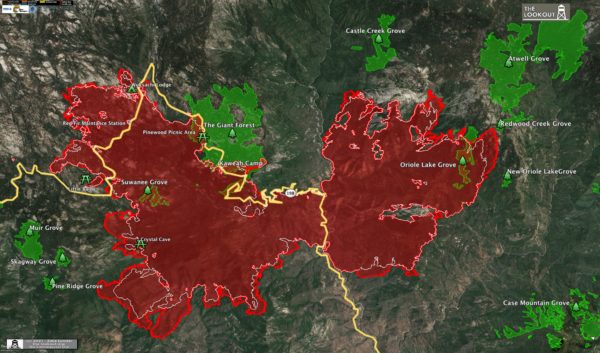 *** September 22 at noon update from Ryan Stephens:
Yesterday’s maps took a look at the Pine Top Mountain area, where fire was approaching the ridgeline and set to back down  toward the Redwood Creek and Atwell Groves. Fire spread in this direction inches the fire closer to the communities of Mineral King and Three Rivers.

At the time of the IR flight yesterday, the fire has reached the summit of Pine Top Mountain and is nearing the Redwood Creek Grove.

Looking north from the Atwell and Redwood Creek Groves. 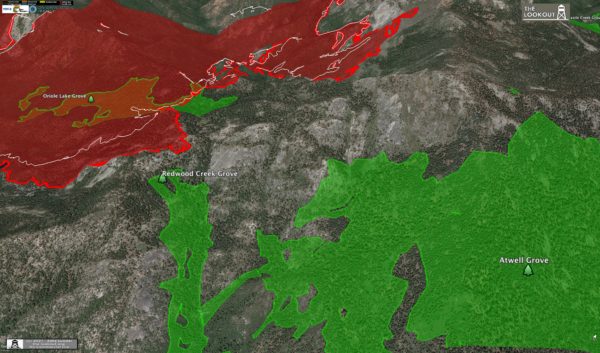 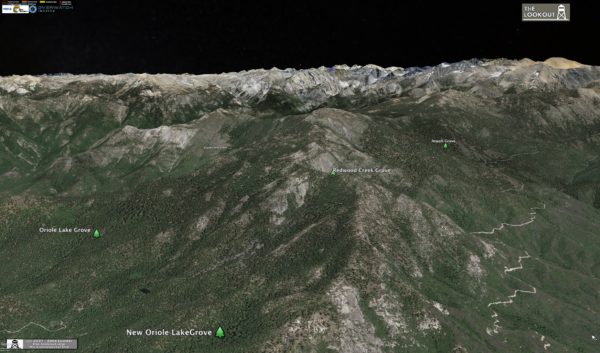 Over to the southwest side of the fire. Looking west as growth continues in the Yucca Mountain Roadless Area. The fire is inching closer to the Sequoia Groves seen in the foreground of the map below. 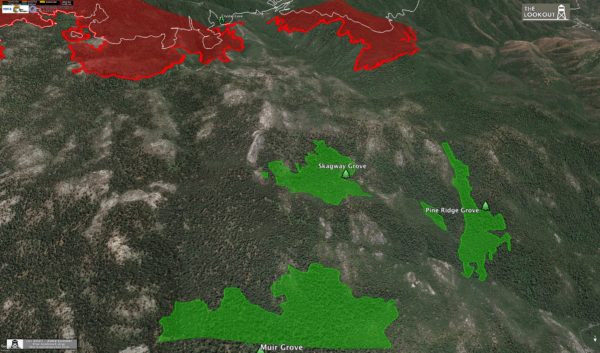 We appreciate all of the help we are getting from both anonymous and named contributors. If you’d like to share your perspective on how fires are unfolding in areas you know well, email us. All contacts will be kept confidential.

The Lookout is user-supported. If you find our work helpful or interesting, please consider setting up a subscription donation via PayPal at the link below. This funding helps us pay for mapping help, gas for fieldwork, web hosting, monthly internet, and other costs of doing this work. Thanks to everyone who has helped us out so far!