Commentary by Chuck Ervin  *****  Maps and Captions by Ryan Stephens: 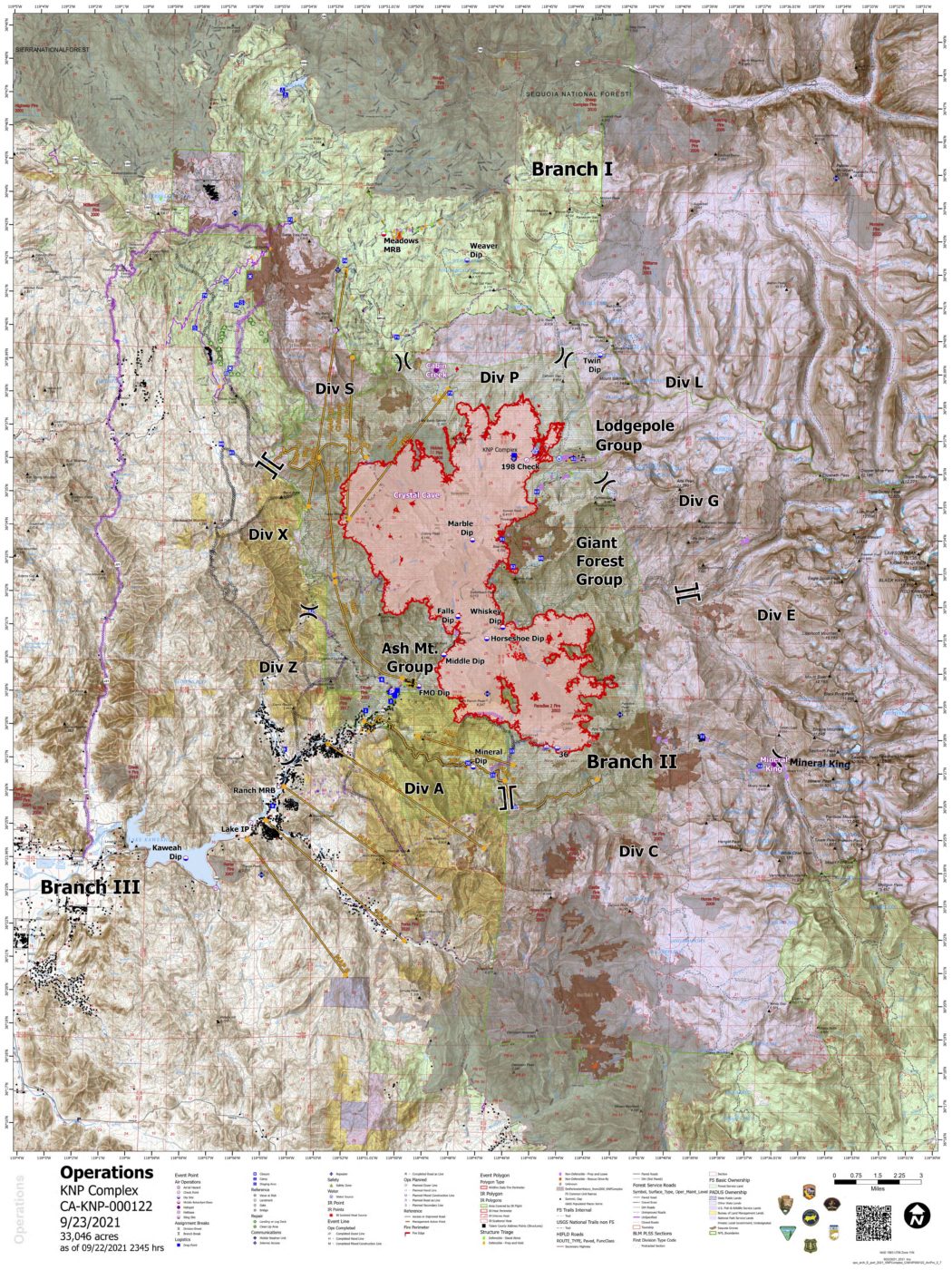 Alexander Pincus IR interpreters log, September 22 at 11:55pm:
Observed perimeter growth along the majority of the western and northern sides of the perimeter. Several smaller fingers advancing past the perimeter to the east and south. 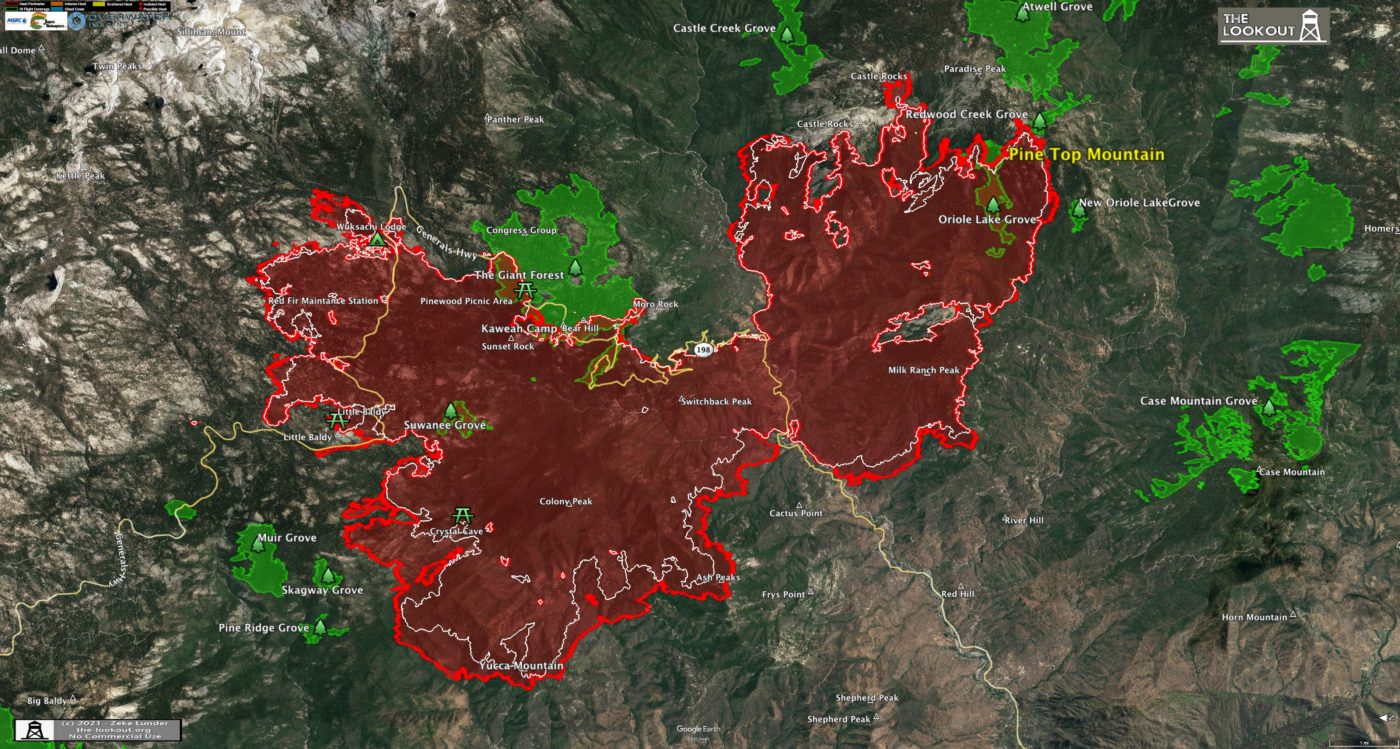 Looks to be some firing operations along the Generals Highway near Little Baldy. 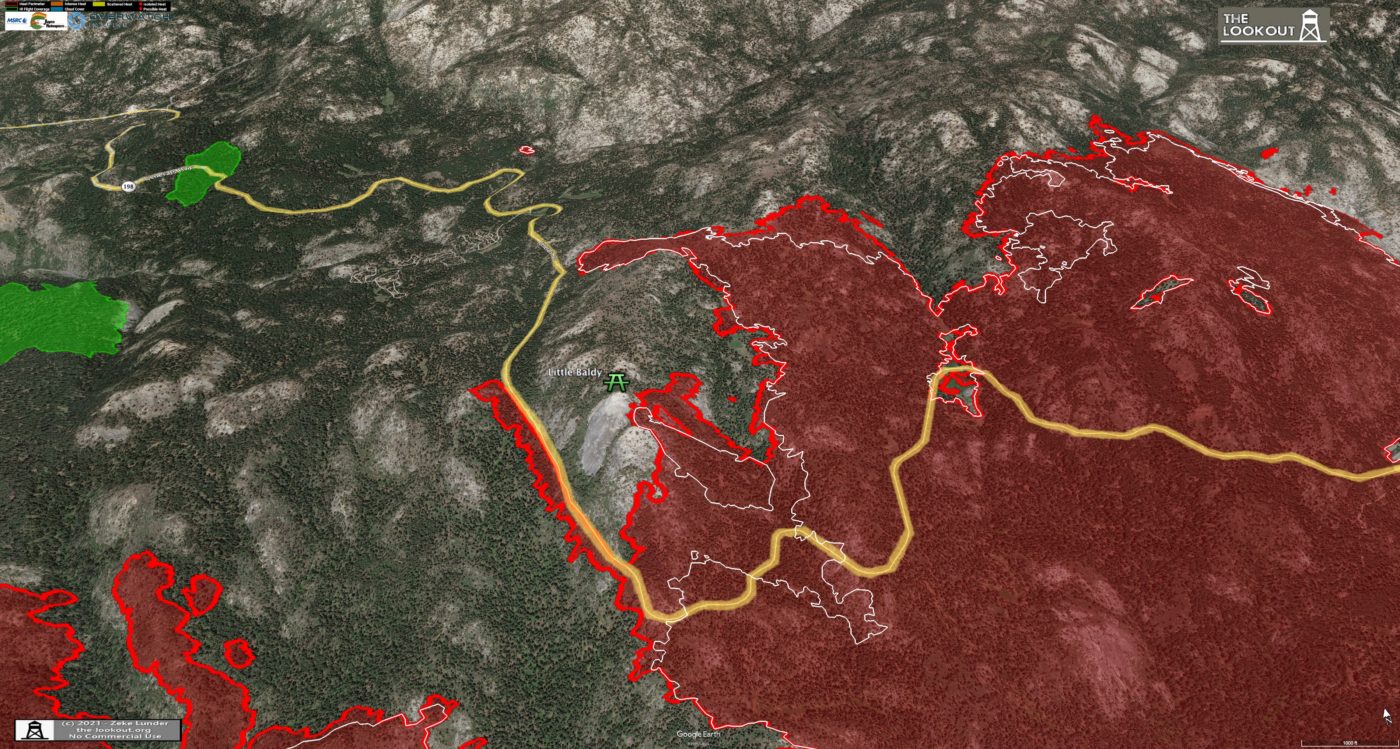 ***September 23 at 6:30am, Commentary from Chuck Ervin
KNP Complex continues to grow significantly in the Yucca Creek/Yucca Mountain Area.  Spread here can be rapid because of steep drops into lower elevation biomes.  That will be more of the oak woodland and chaparral rather than mixed conifer forest.  The fire now backs from Yucca Mountain ~5000 feet down to the confluence of Burnt Point Creek with the North Fork of the Kaweah ~2200 feet.  Should it cross Burnt Point Creek, it may quickly run uphill through grassy oak savannah to Pine Ridge at ~6000 feet. Continued spread up the North Fork of the Kaweah is a concern on the fire suppressions radar, as indicated by last night’s call for the evacuation of the Eshom area. 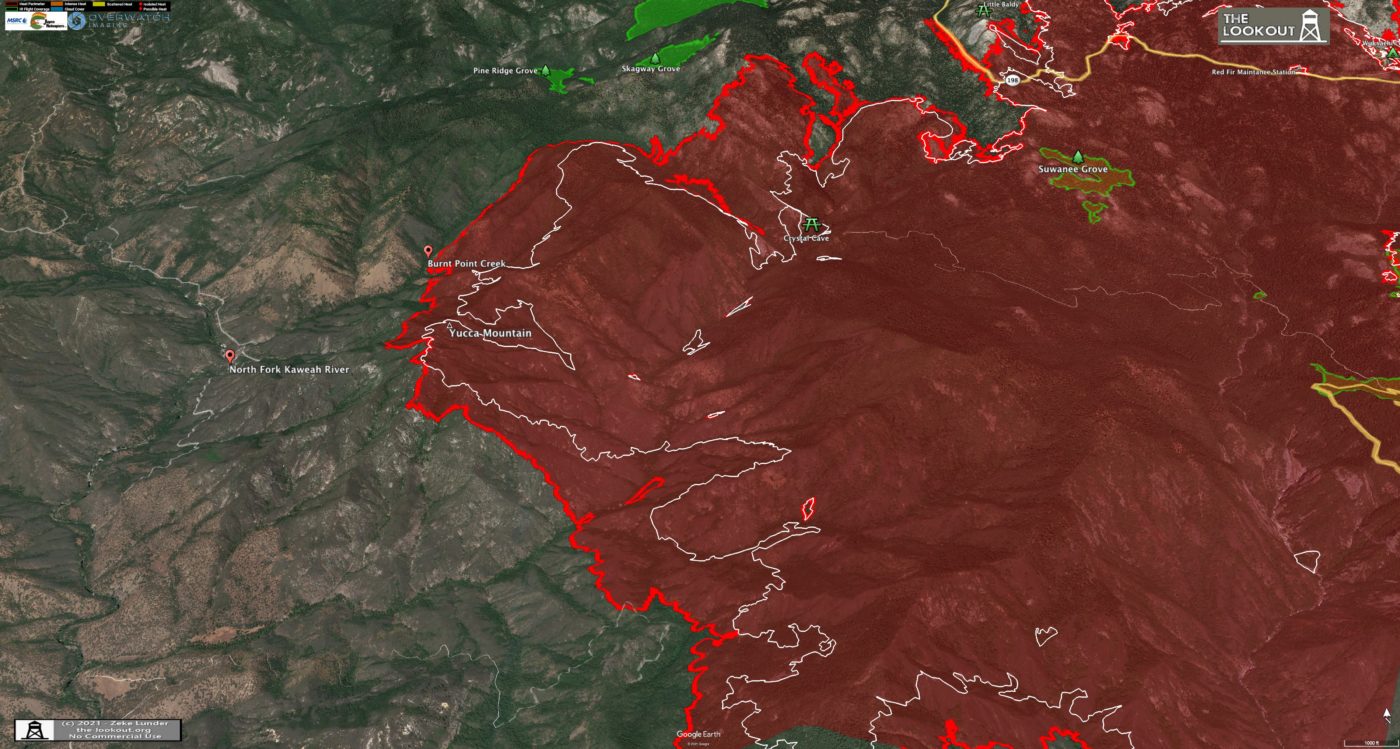 The Paradise Ridge area appears to still be burning very actively. The suppression effort here is challenged to keep the fire on advantageous ground, before it backs into flashier fuels and south facing ground. 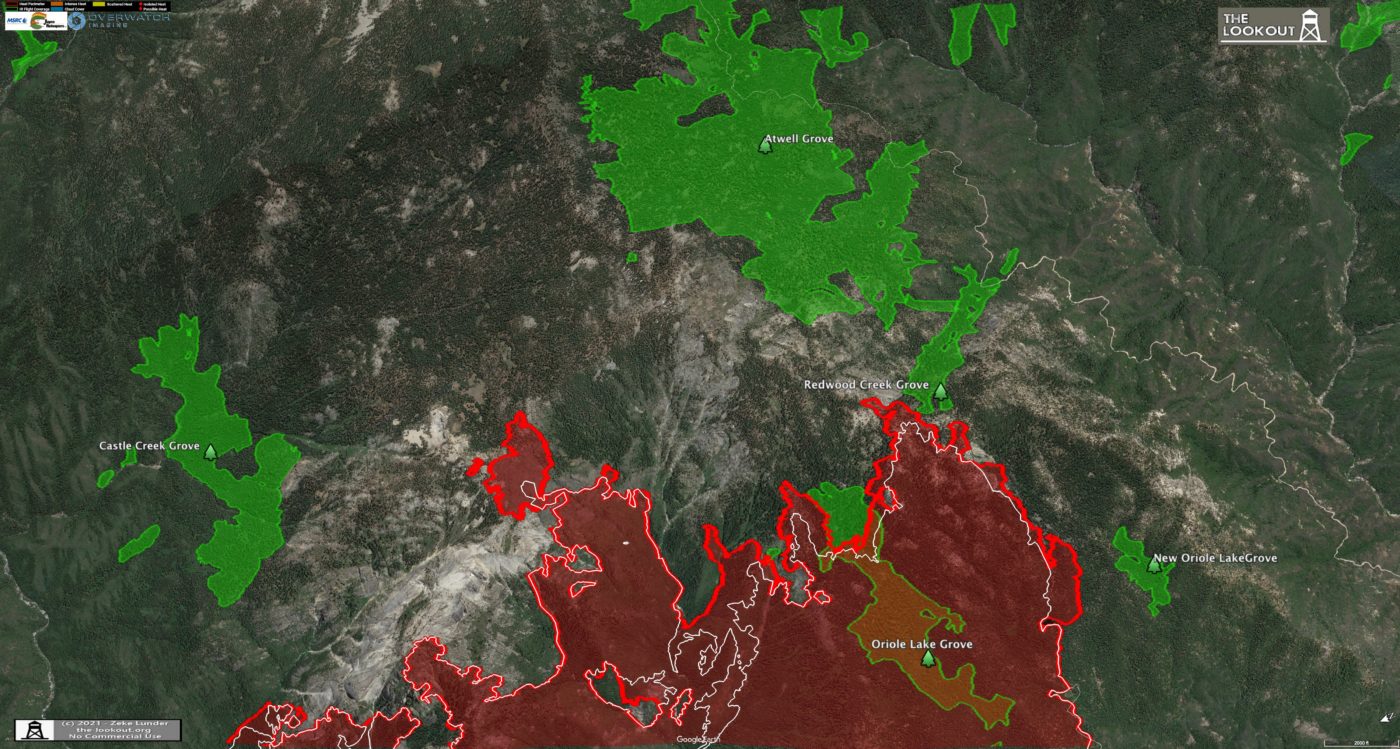 The fire appears to have breached Castle Rocks and also crossed the ridge above Oriole Lake near the headwaters of Redwood Creek, meaning that we may see more extension towards Mineral King Road in the coming days. 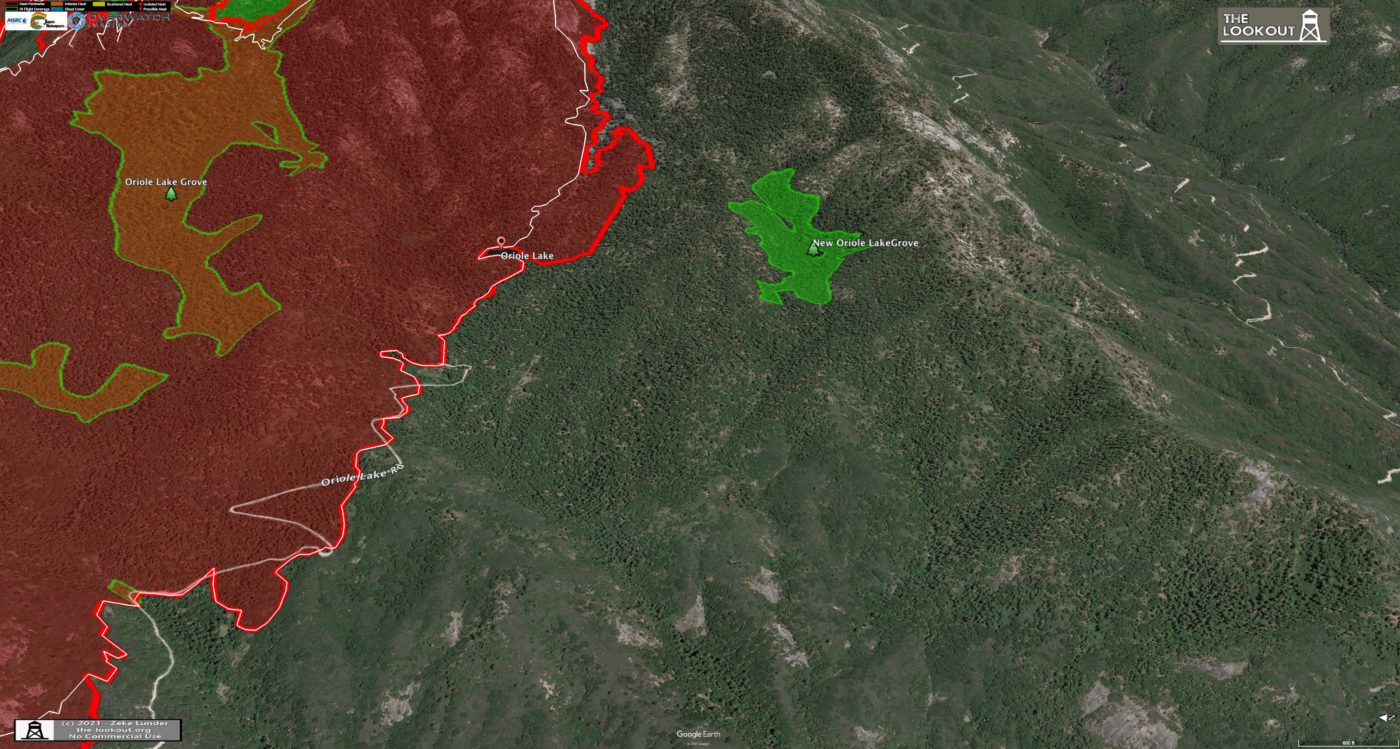 On the north side, the fire continued through the rocks and will likely reach Cahoon meadow today or tomorrow.

More social media reports of logistical issues in the KNP Complex Fire Camps.  Lack of sanitation services and poor food availability.  A post on the wildfire forums stated that dozer tenders were instructed to travel to Mineral King, even though previous briefings acknowledge that this road is unsuitable for that size of vehicle (not to mention unsuitable country for dozers).  Sounds like it really caused some problems and made for an unsafe situation.

Commentary by Chuck Ervin  *****  Maps and Captions by Ryan Stephens: 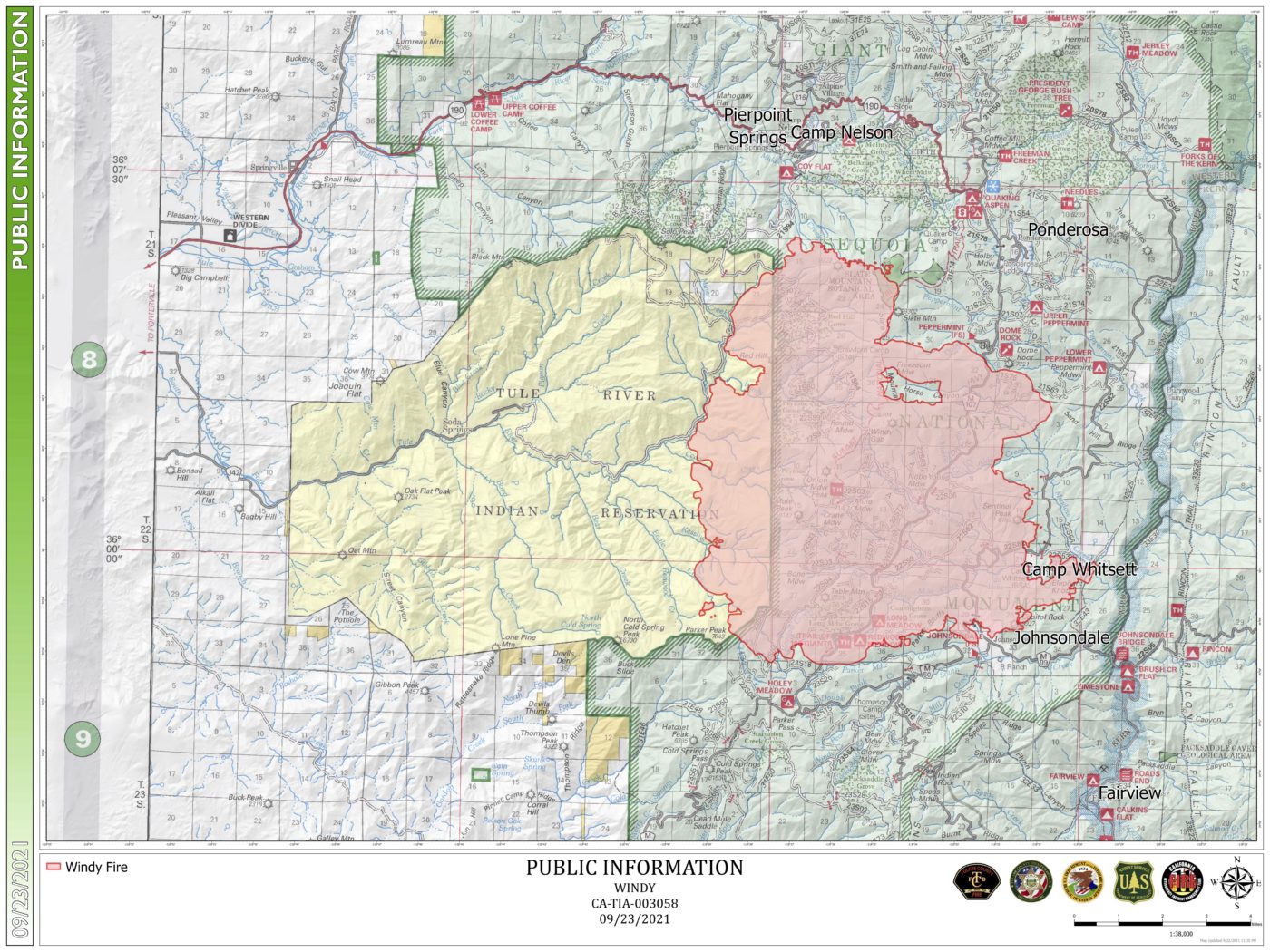 Jeremy Hurd IR interpreters Log, September 22 at 10:00pm:
Significant growth to the south with intense heat throughout the extended perimeter. Perimeter also extended in the NNE section as well as the NNW. Scattered heat throughout most of the incident. 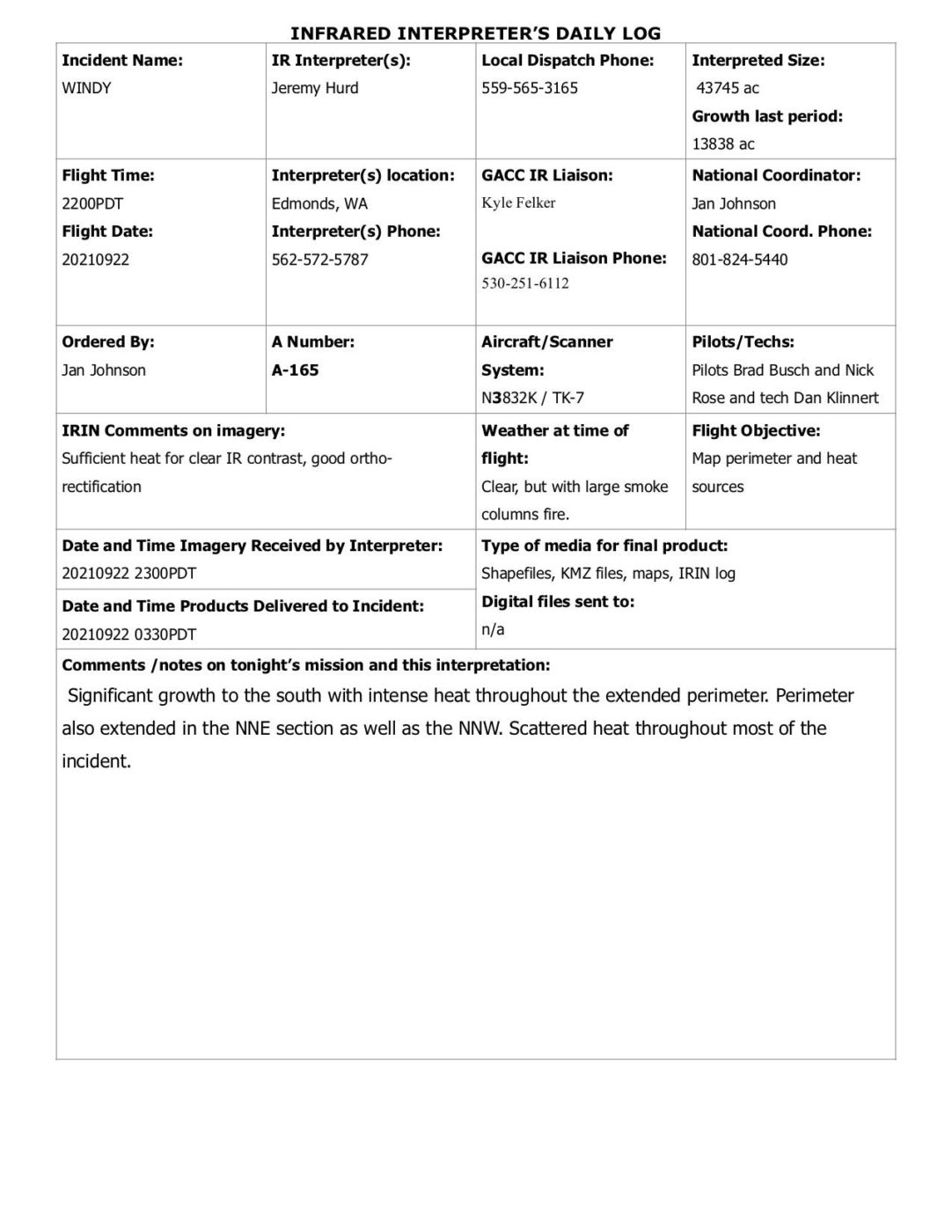 Below is an overview of the fire. Looking north from the south end of the fire. White lines show fire growth over the past 24 hours 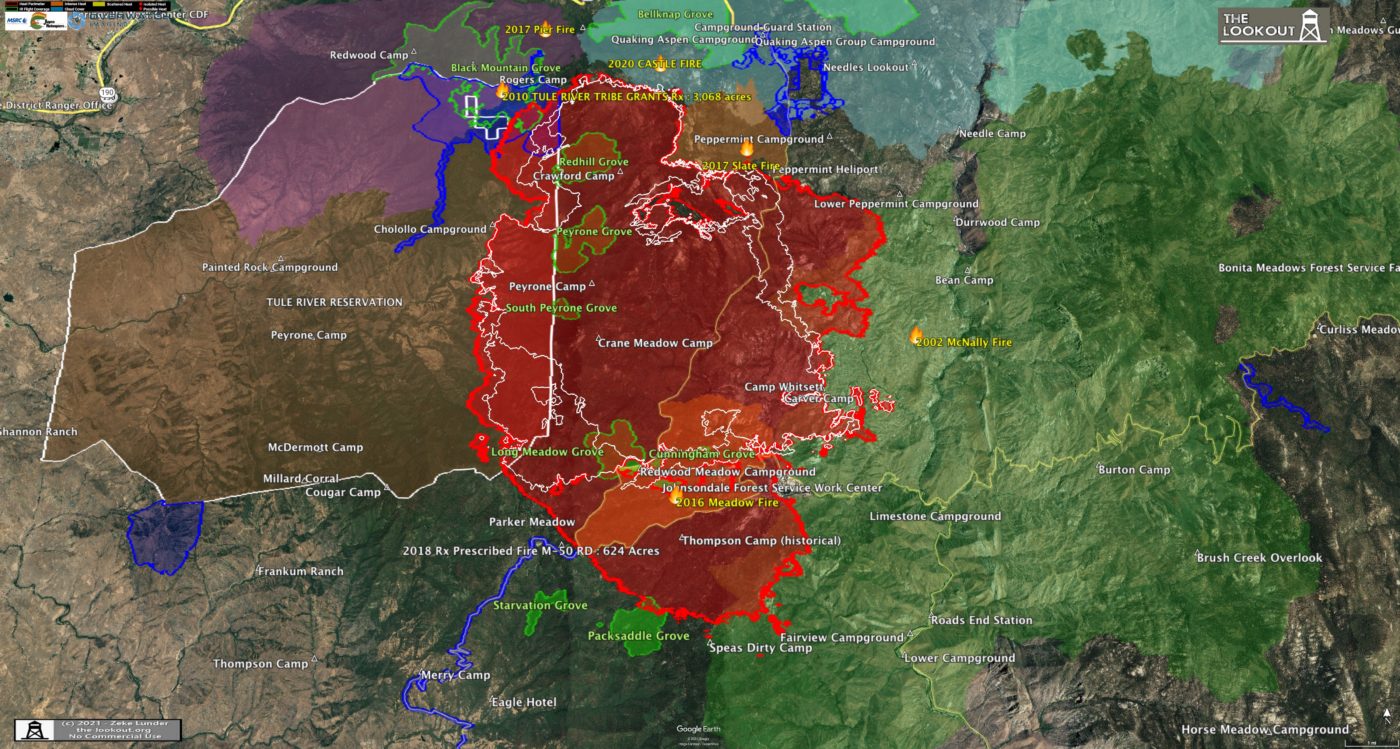 ***September 23 at 6:30am, Commentary from Chuck Ervin
The Windy got out into open sun and was pushed by steady west winds for a major run to the east and south past Johnsondale.  Hanging up near Speas Ridge, the new growth could be measured in square miles.  I count 10 of them. 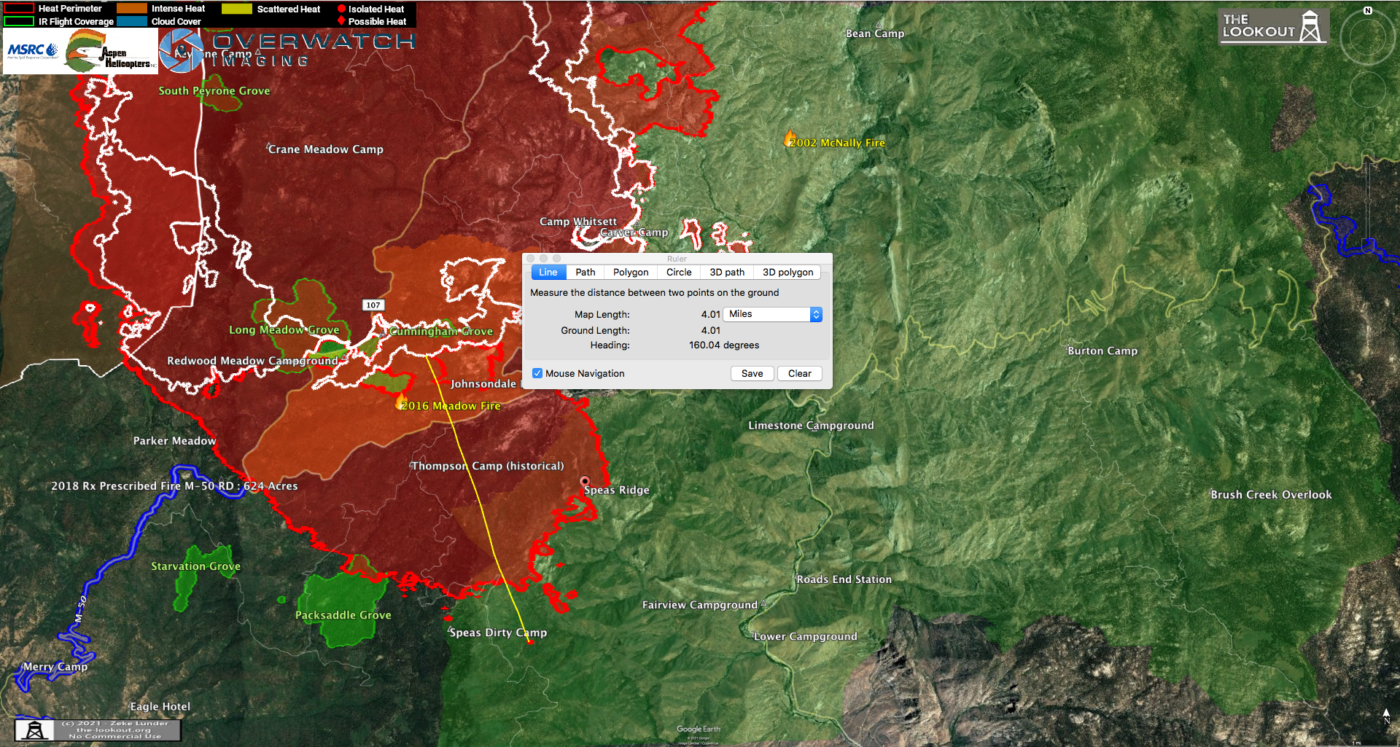 Looking northeast from Starvation Grove. Not much growth through Parker Meadow (left of M-50 road). Interesting to see today’s perimeter landing right on the M-50\M-90 split, right where the Rx treatment performed in 2018 along M-50 finished up. 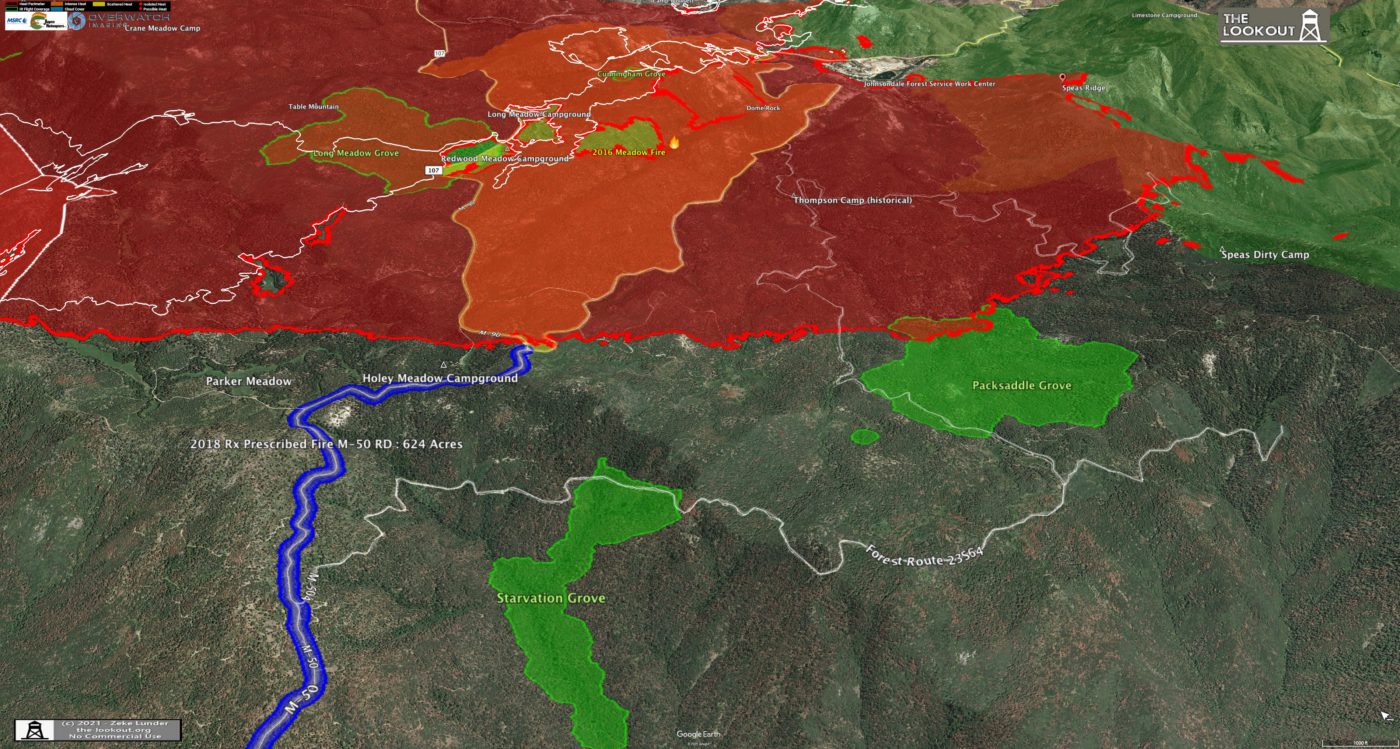 In better news, the fire did not grow as aggressively towards Redwood Corral, or southwest near Parker peak.  It did extend well into the Black Mountain Grove, a fuel treated area.

Looking east on the north end of the fire. 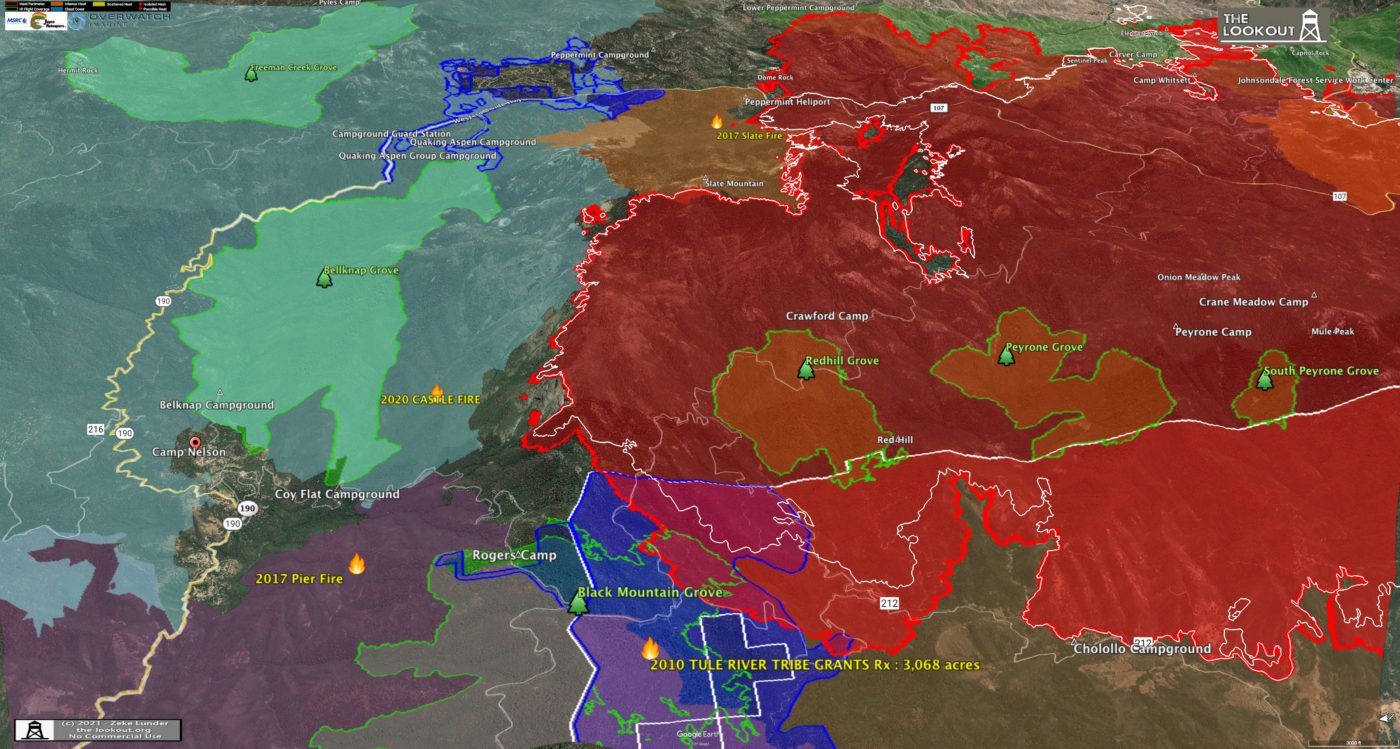 That, along with spread in the Peppermint area, prompted new evacuations around Camp Nelson/Pierpoint last night. 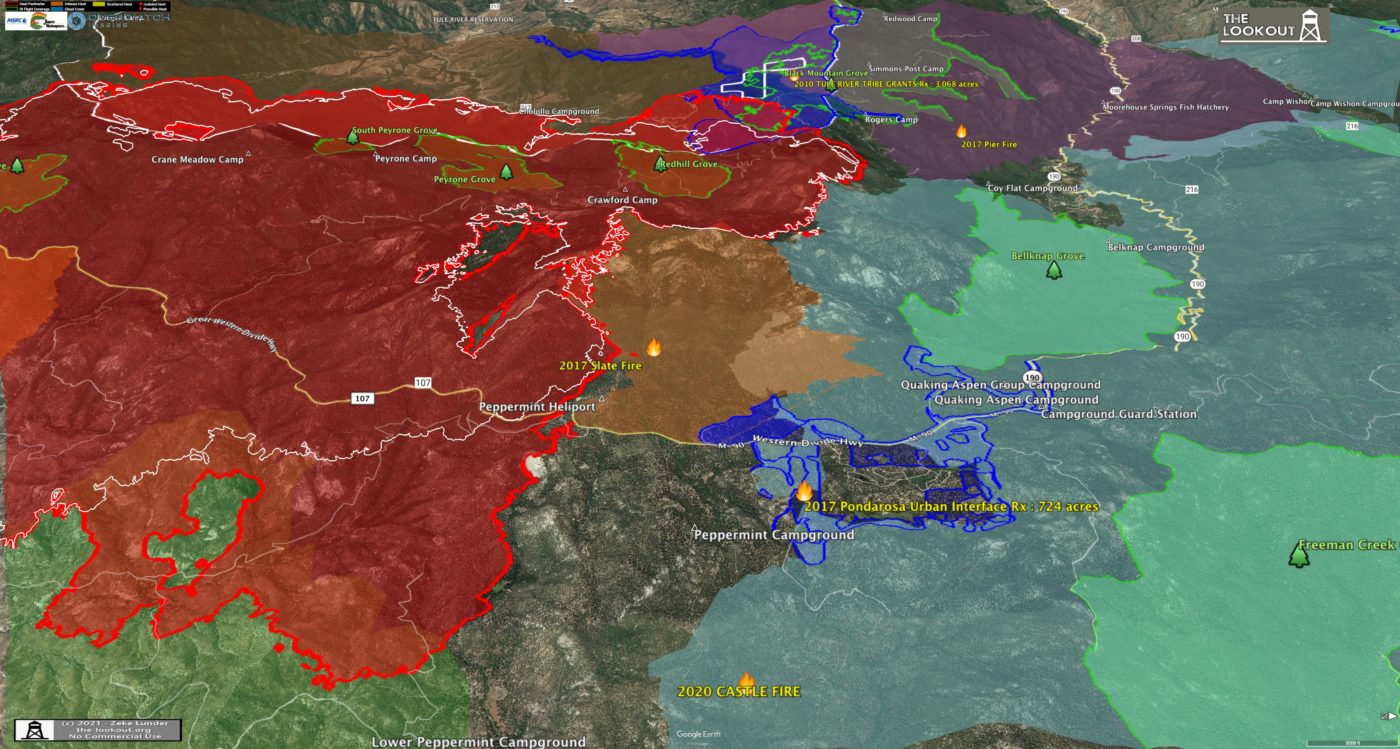 Continued hot weather and usual diurnal winds throughout the week. These fires have been generating plenty of their own winds.