Heavy smoke is in the forecast for some time, now. Morning AQ is at apocalyptic levels, though we aren’t under the Martian sky like we were last September.
Looking for some info on a longer-term forecast and how that will affect smoke dispersion, will update when I have better info. The forecast below says a weak front may move through Sunday, followed by more high pressure. High pressure and stability is a good thing, keeps the smoke packed in over the fire, keeping things much cooler. 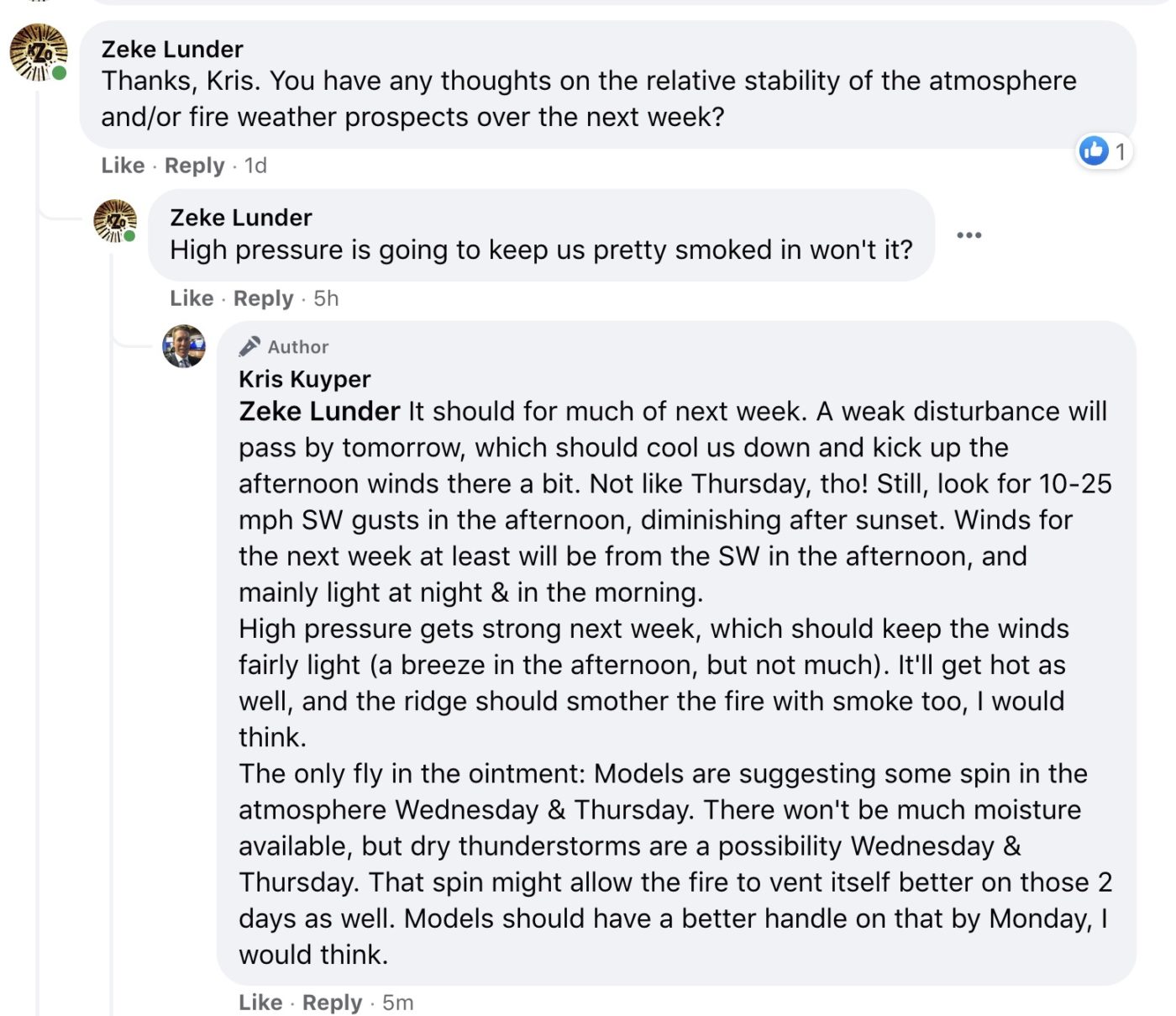 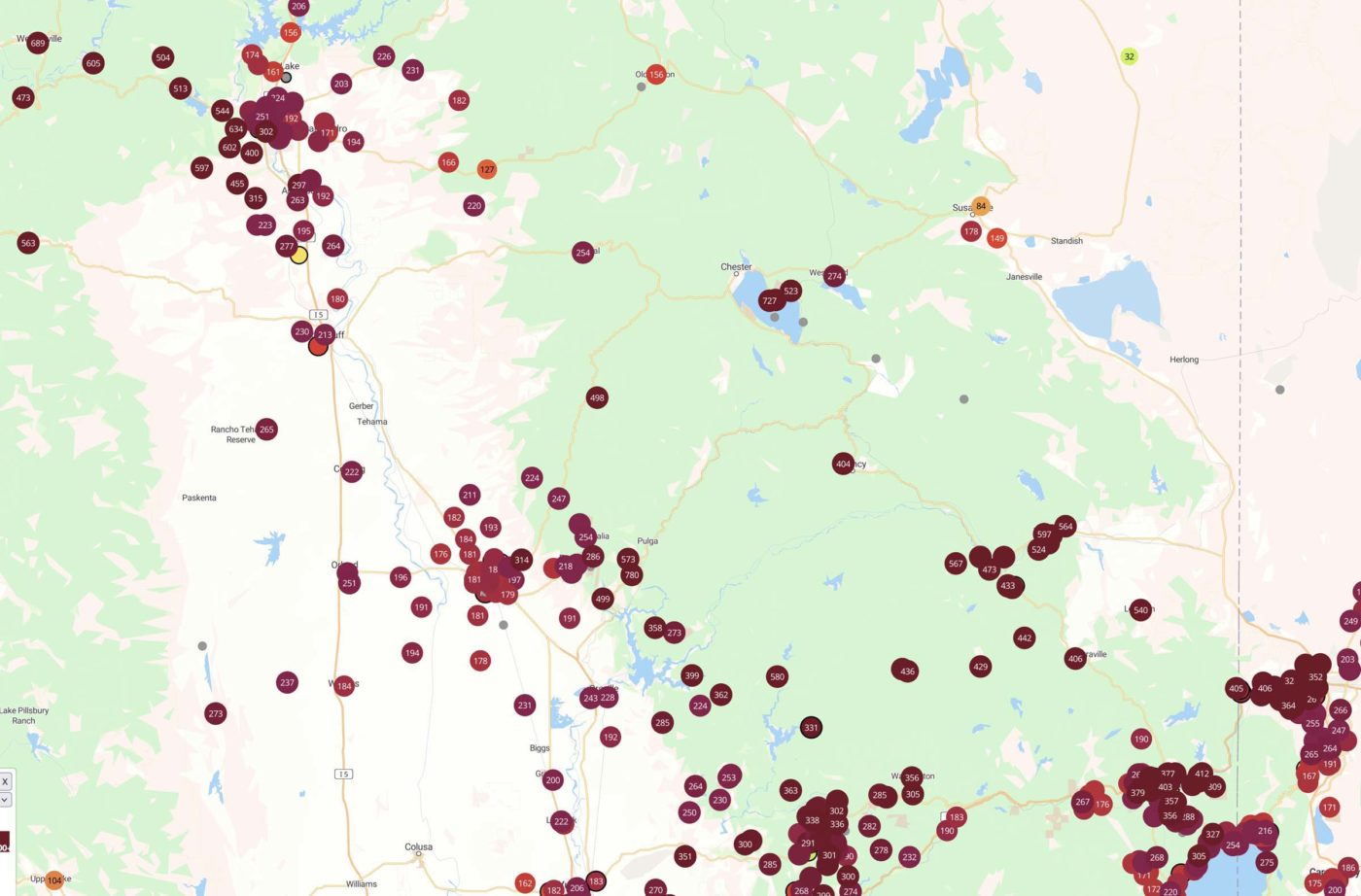 Here are the fire behavior and weather forecasts for west side of fire. 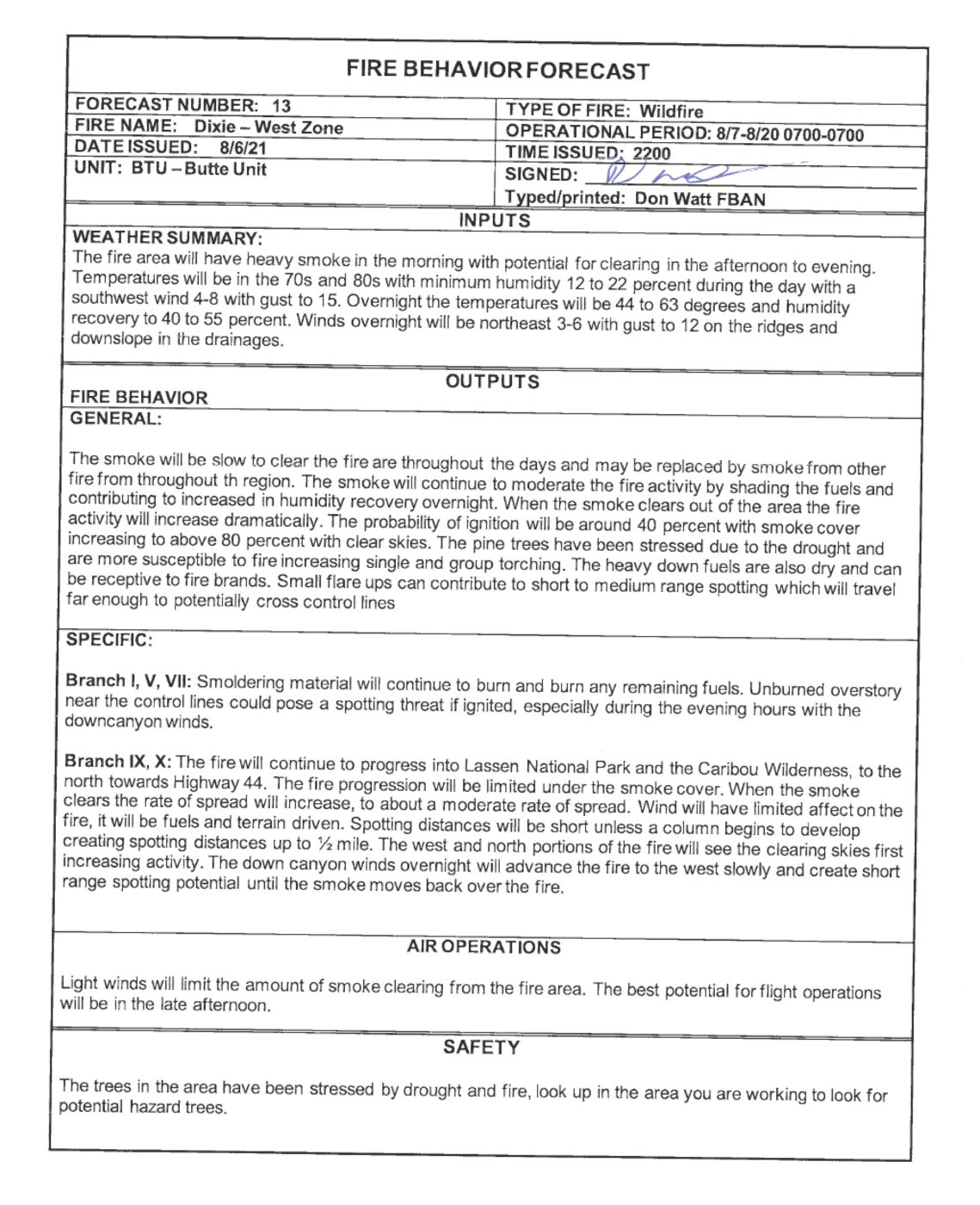 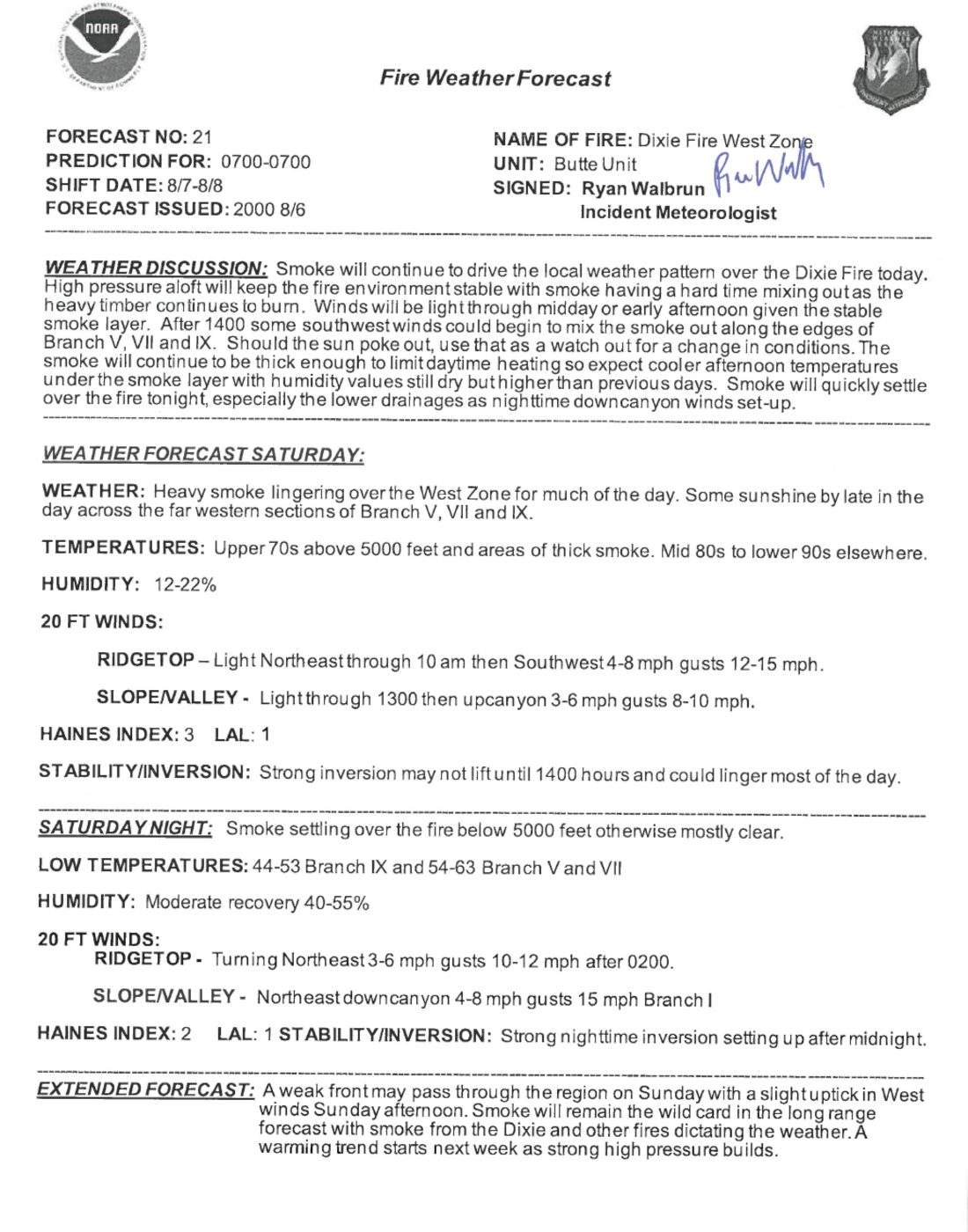 Here are updates on where the fire is. There was a bunch of IR flown last night. It came in at a bunch of different times and each image has a different time stamp you can see if you look in upper-left corner. In general, imagery was captured between 3 and 6 am, 8/7/2021. These images move clockwise around the fire, starting at Canyondam. 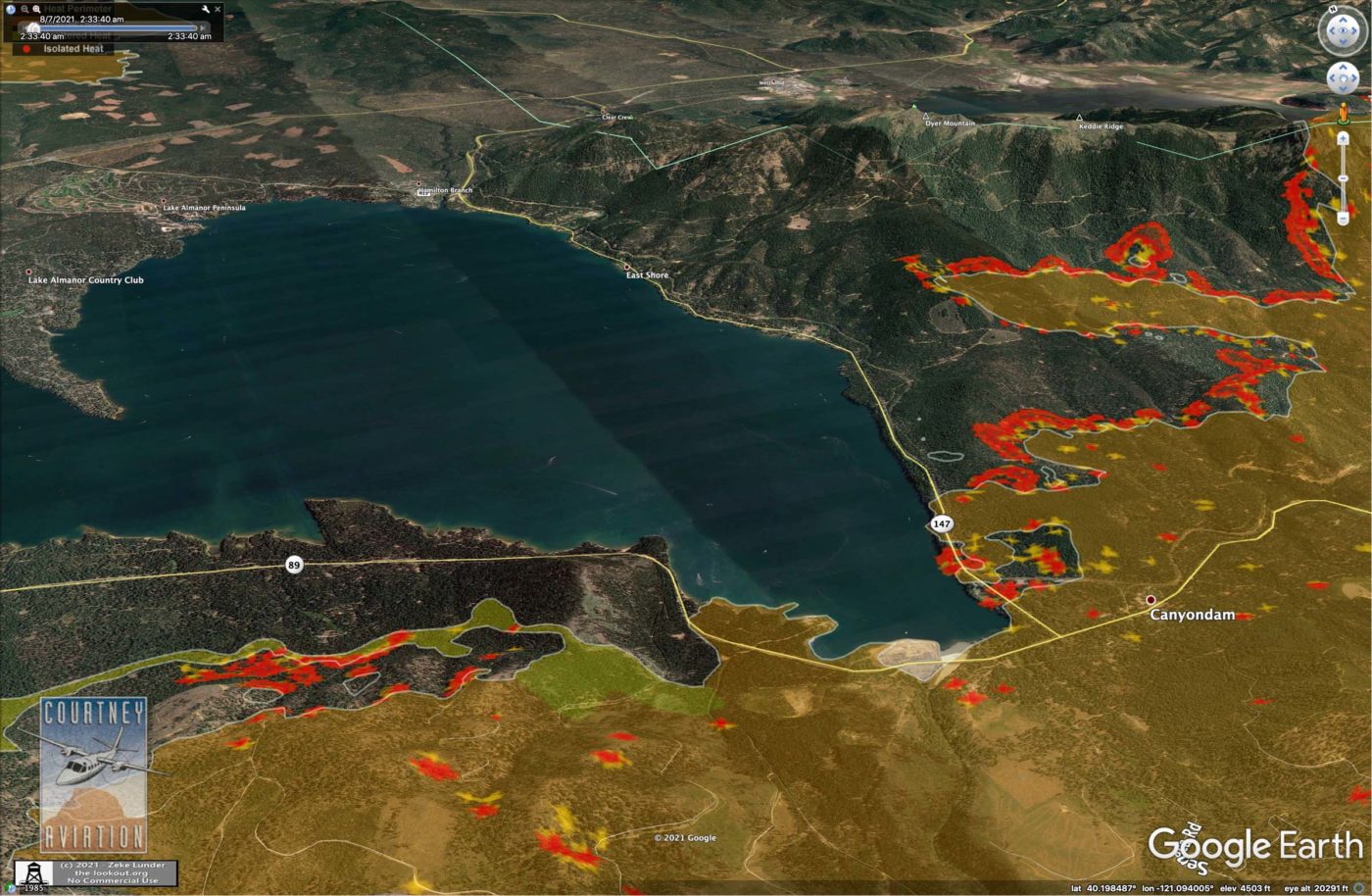 Orange areas with white outline are areas burned 24 hours ago, bright yellow/orange/red is new growth. There was some growth uphill of the finger of fire halfway up SW side of Dyer Mountain, and some fire within the perimeters of firing operations along Highway 89 by the Canyondam Boat Ramp, but nothing over lines here. These lines have held since 7/22/21. 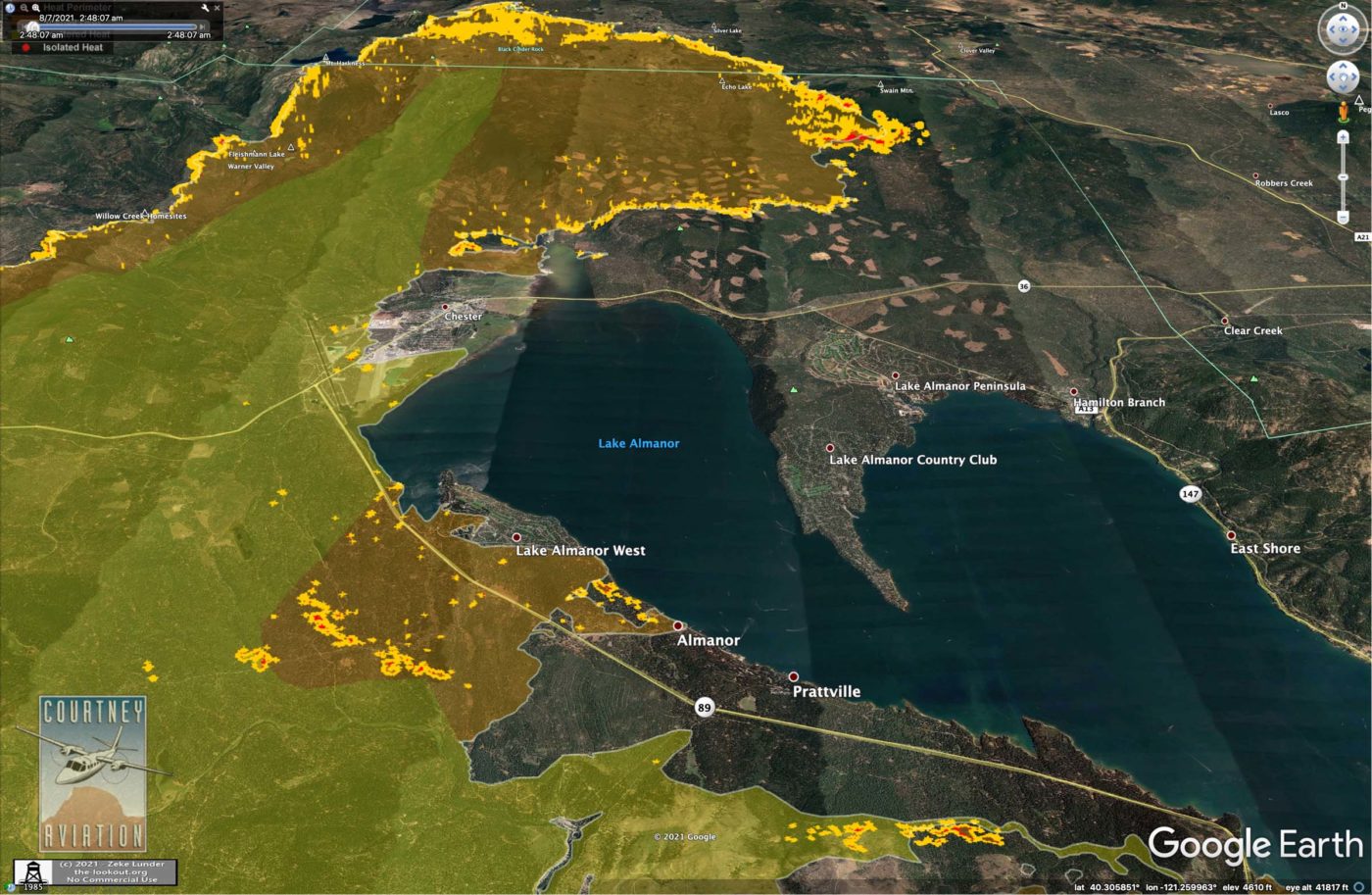 No new spread toward Chester. A firing operation checked up the fire from Almanor out to Highway 89 – this area still has some heat in it. No growth observed into Lake Almanor West. 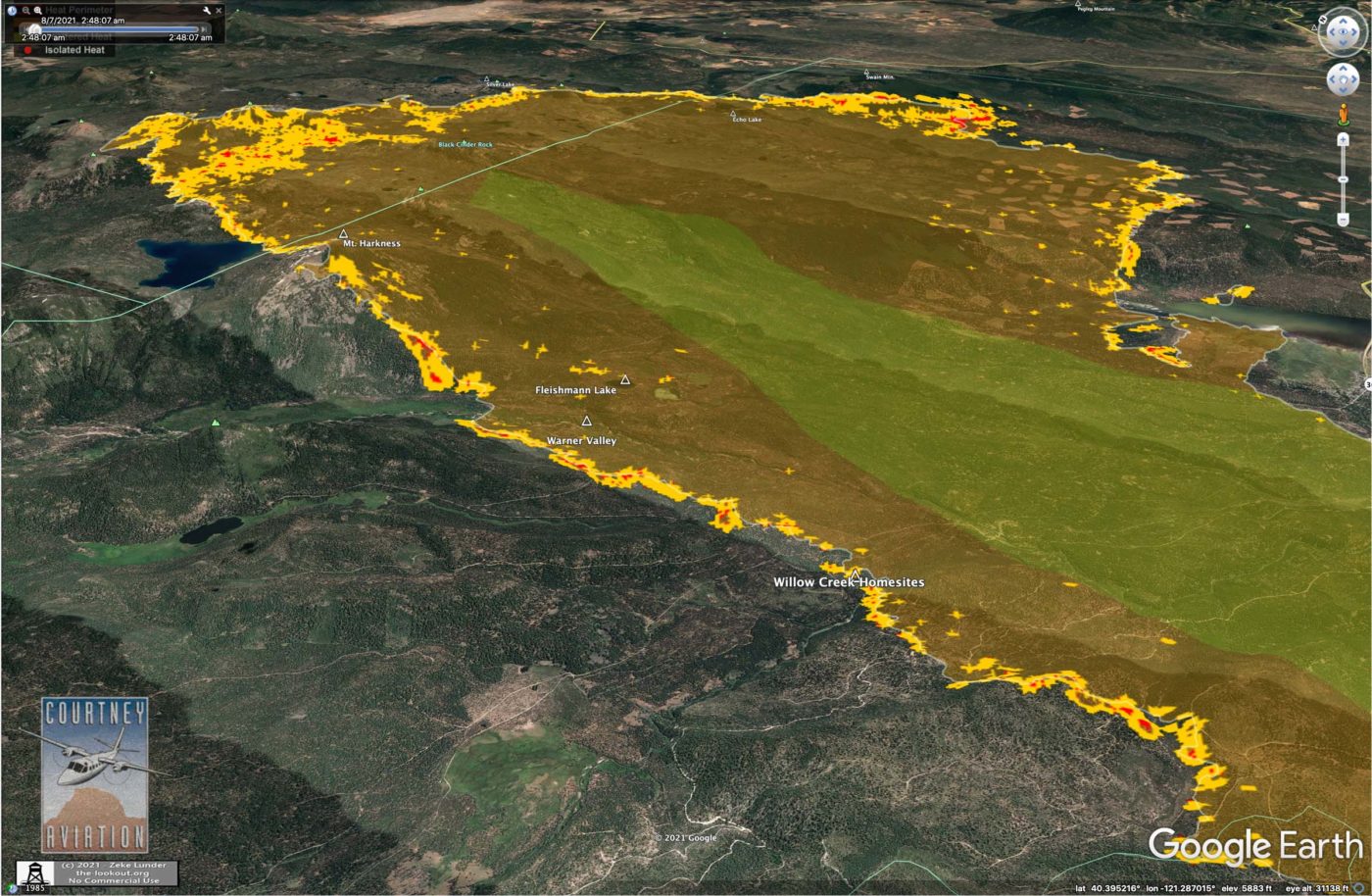 Fire had very minor spread to the West toward Willow Creek Homesites. The fire is on top of Mt. Harkness, has not burned to Willow Lake. 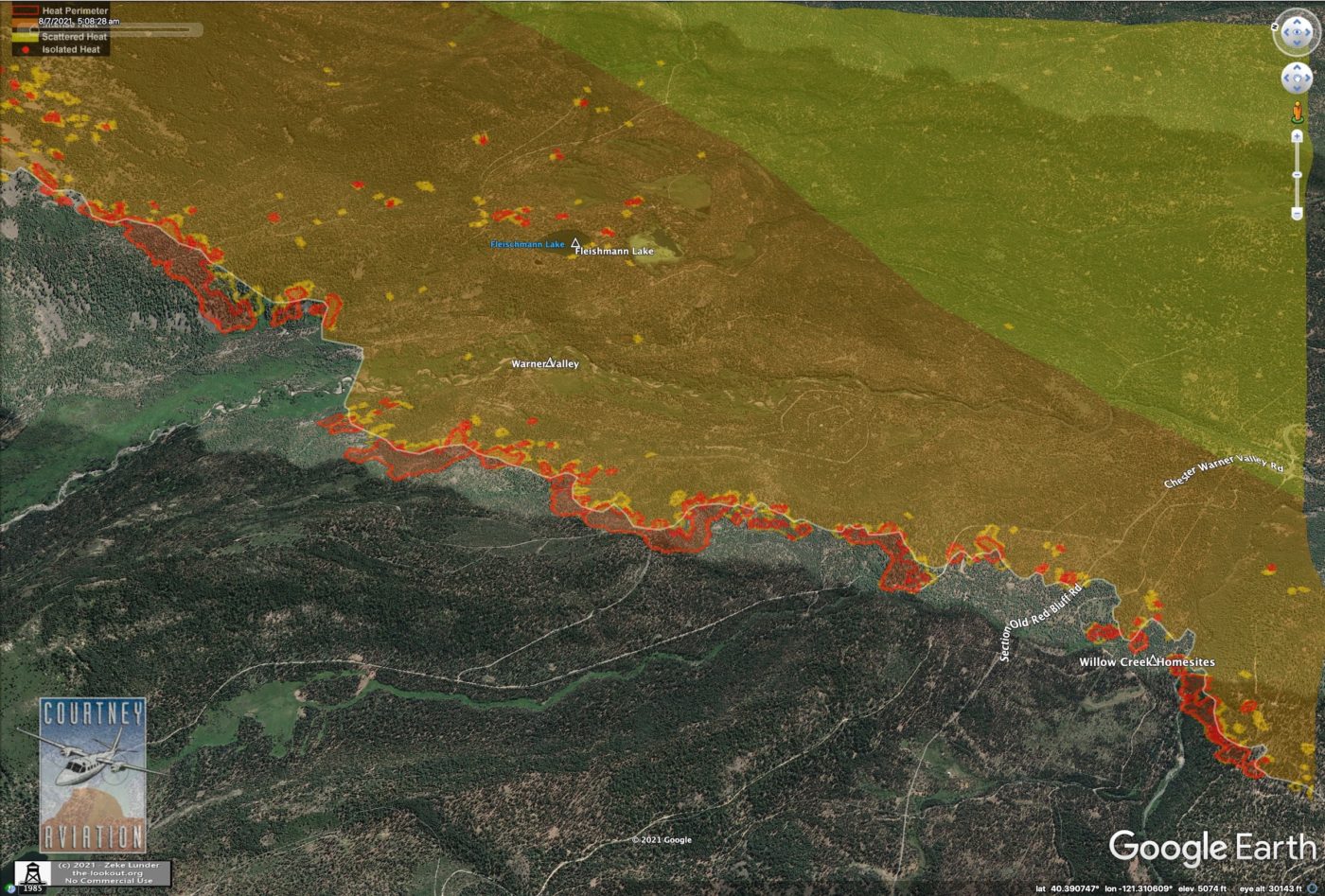 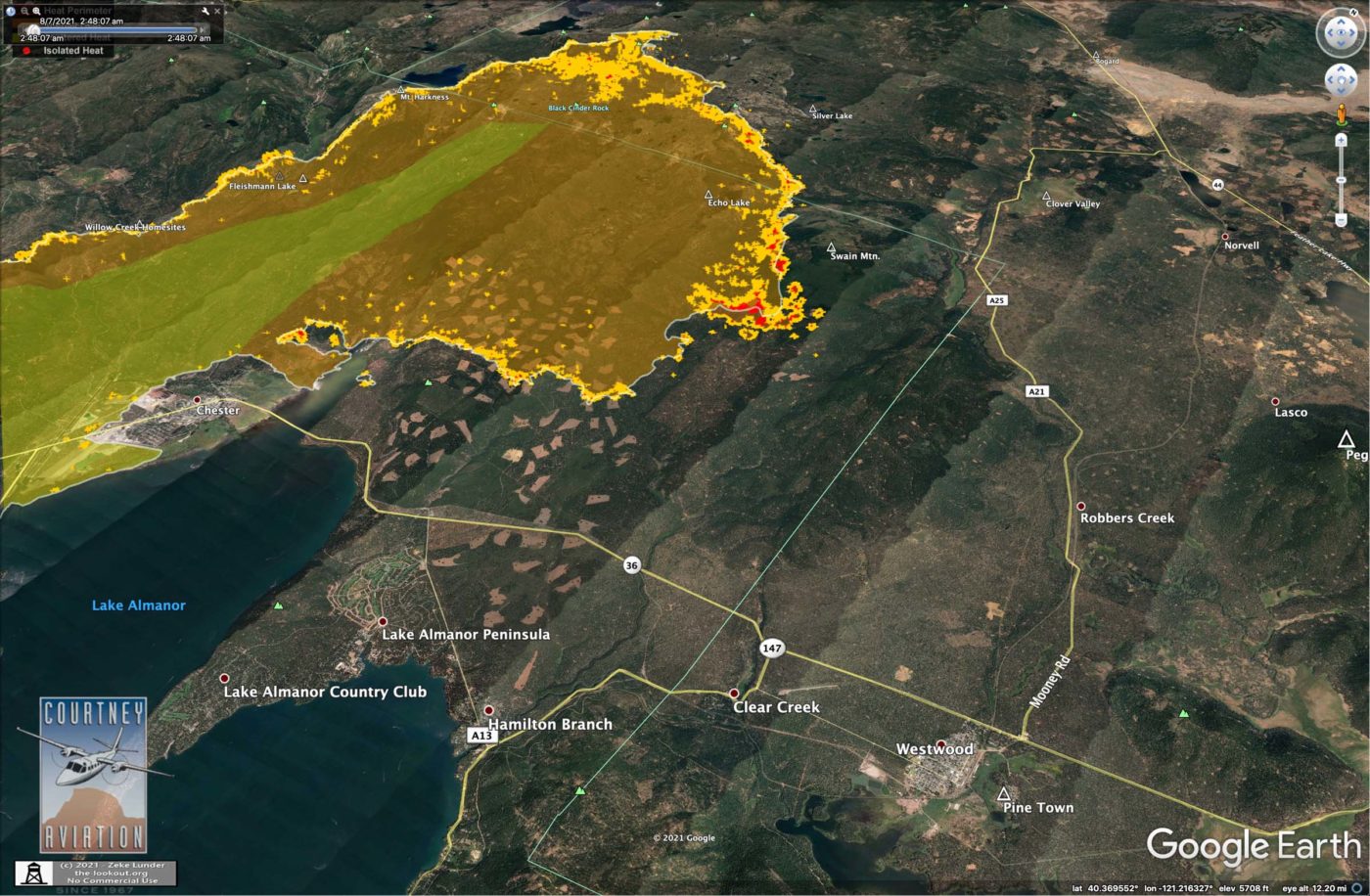 Looking NW over Hamilton Branch toward Mt. Lassen. The fire had minor spread to the east, driven by medium-range spotting, generally less than a 1/4 mile. There was a spot about 1 mile out from the main body of the fire, likely started during the fire’s big run 36 hours ago. The fire is still 8 miles from Westwood, 5.5 miles from Clear Creek, and 4 miles from Foxwood.

What’s the plan? The Operations Maps for today show the primary containment plan is to use A-21 headed north from Highway 36, the Bogard Cutoff Road north of Clover Valley, and Highway 44 all the way to Old Station as the primary box. There is some proposed dozer line on the maps cutting from A-21 over toward Rock Creek (Highway 36 icon, just left of center on map above), and also proposed ‘road-as-line’ prep on the Rock Creek Road heading up toward Swain Mountain. If we have days of deep smoke and fire doesn’t get up and start spotting there is an outside chance they can make this work. One concern is these areas are higher-elevation and less prone to smoke inversions packing them in like in the deep canyons, so if there is anywhere on the fire that’s going to run for an hour or two during a frontal passage, this is probably it. One thing this corner of the fire has going for it is there was a biomass cogeneration power plant in Westwood for about 25 years and this area got thinned heavily during that time. You can actually see the well-thinned areas on the image above, north of Westwood, where the forest is a paler shade of green. This area extends on the flats all the way north to Highway 44. 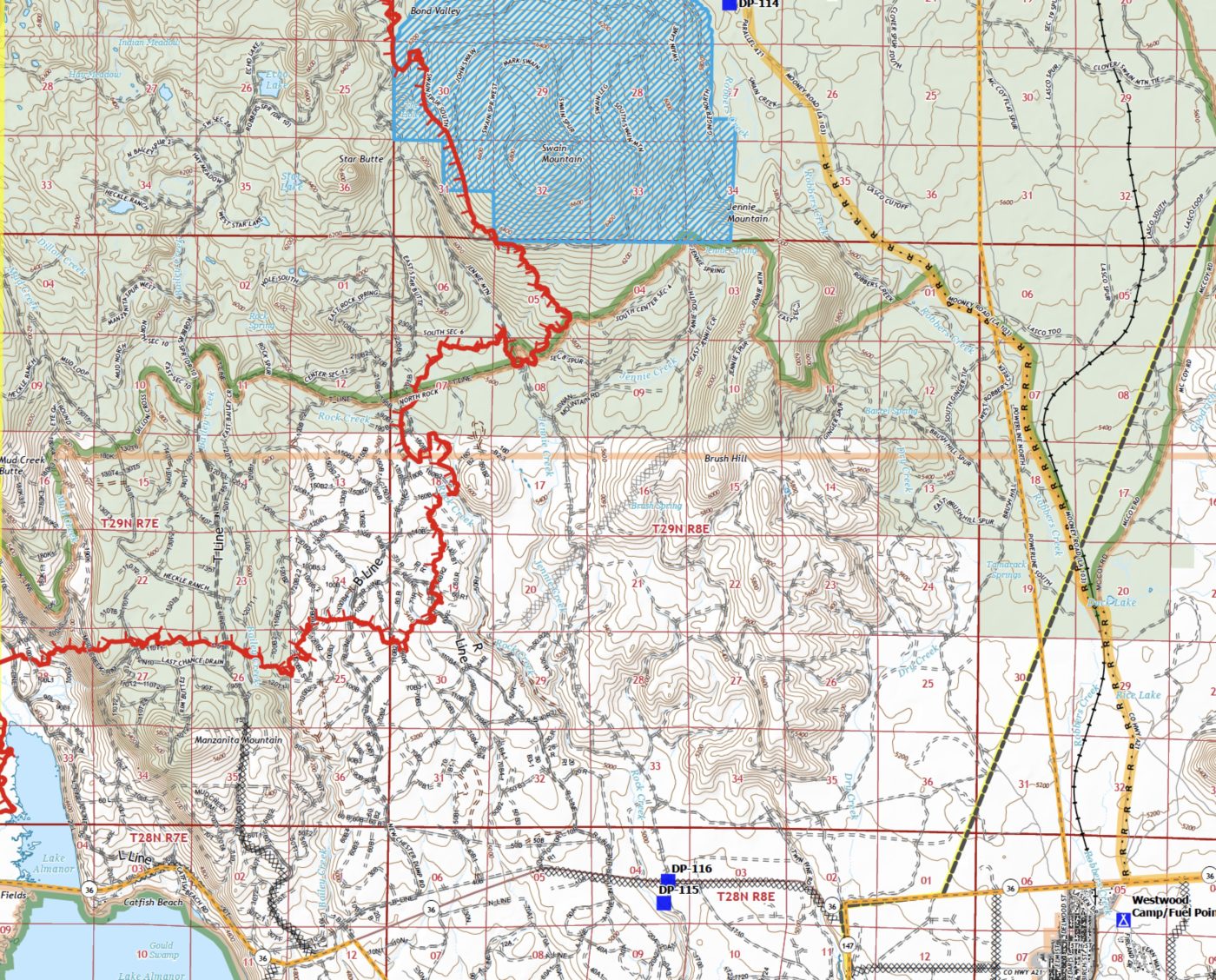 Today’s Ops Map. Proposed dozer line in gray, over top of Brush Hill, in center. DP-116 is at Rock Creek on Highway 36, for reference. 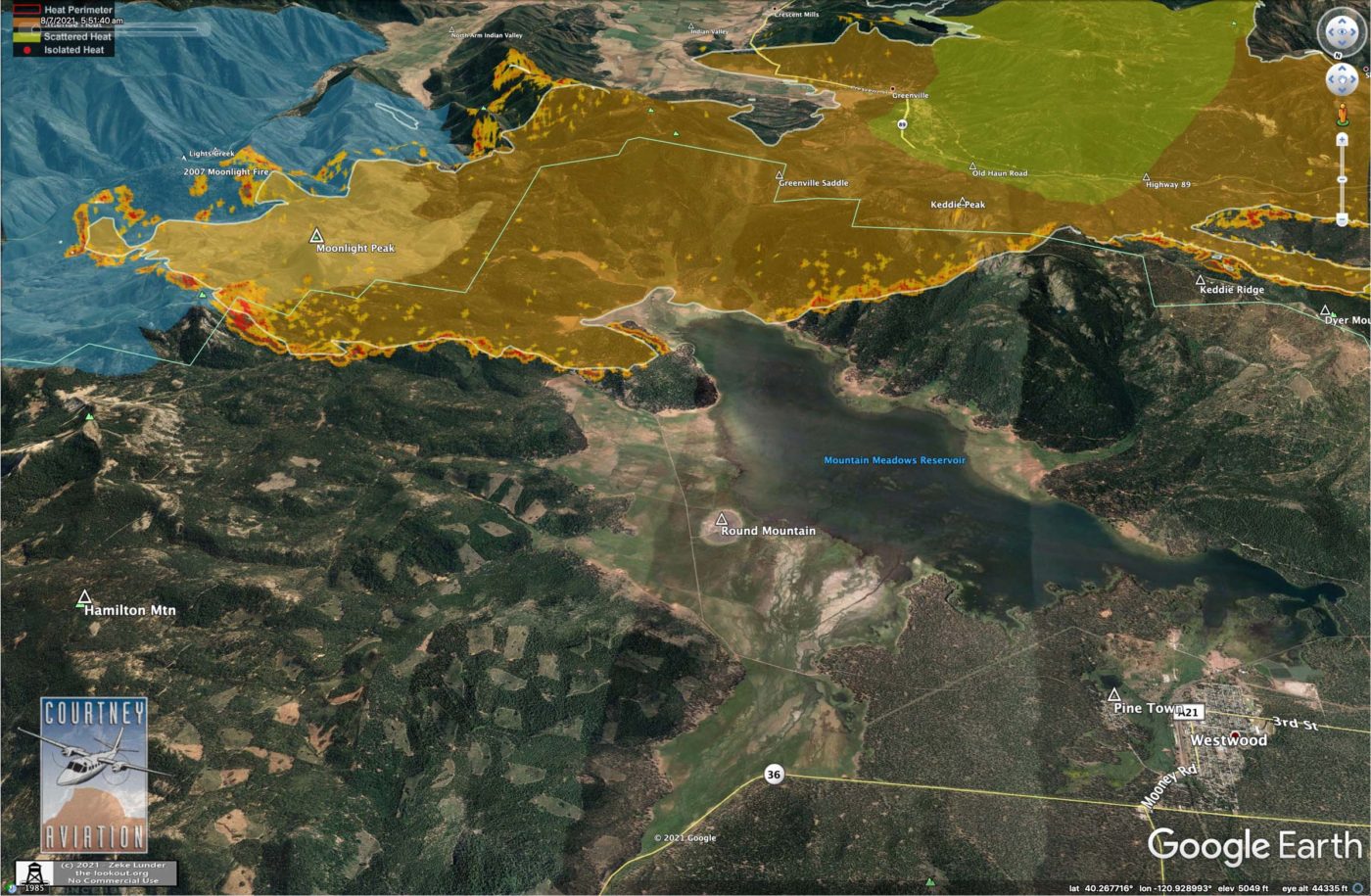 Looking over Westwood to South. Fire is backing down Keddie Ridge, but hardly grew at all on this flank in past 24 hours. White line is 24 hour-old perimeter, new heat is red and bright orange.

Fire has crossed Moonlight Road to the north. Fire has burned through Homer Lake, and is hung up in the rocky areas between Homer and Hidden Lakes. This is one of the places on the landscape that is likely to get great fire effects from backing fire under the smoke. The Keddie-Homer Tract of the Lassen National Forest has some of the biggest trees on the Forest, and it has had no fire as long as most people can remember, and isn’t a place we’d really be able to do much with thinning, so a bunch of backing fire here is maybe the best thing we could hope for in keeping these forests resilient. Time will tell, and I will eat crow in an online video if the whole side of the ridge below Deerheart Lake is black sticks when the smoke clears.

The far end of Mountain Meadows Reservoir burned intensely during the fire’s big blowup two days ago, and I am less hopeful about the fire effects there. Also, most of the Fredonyer Pass range around Hamilton Mountain has ridiculous fuel loading in white fir thickets, and I’m not hopeful the areas west of Moonlight Peak fared well, either. 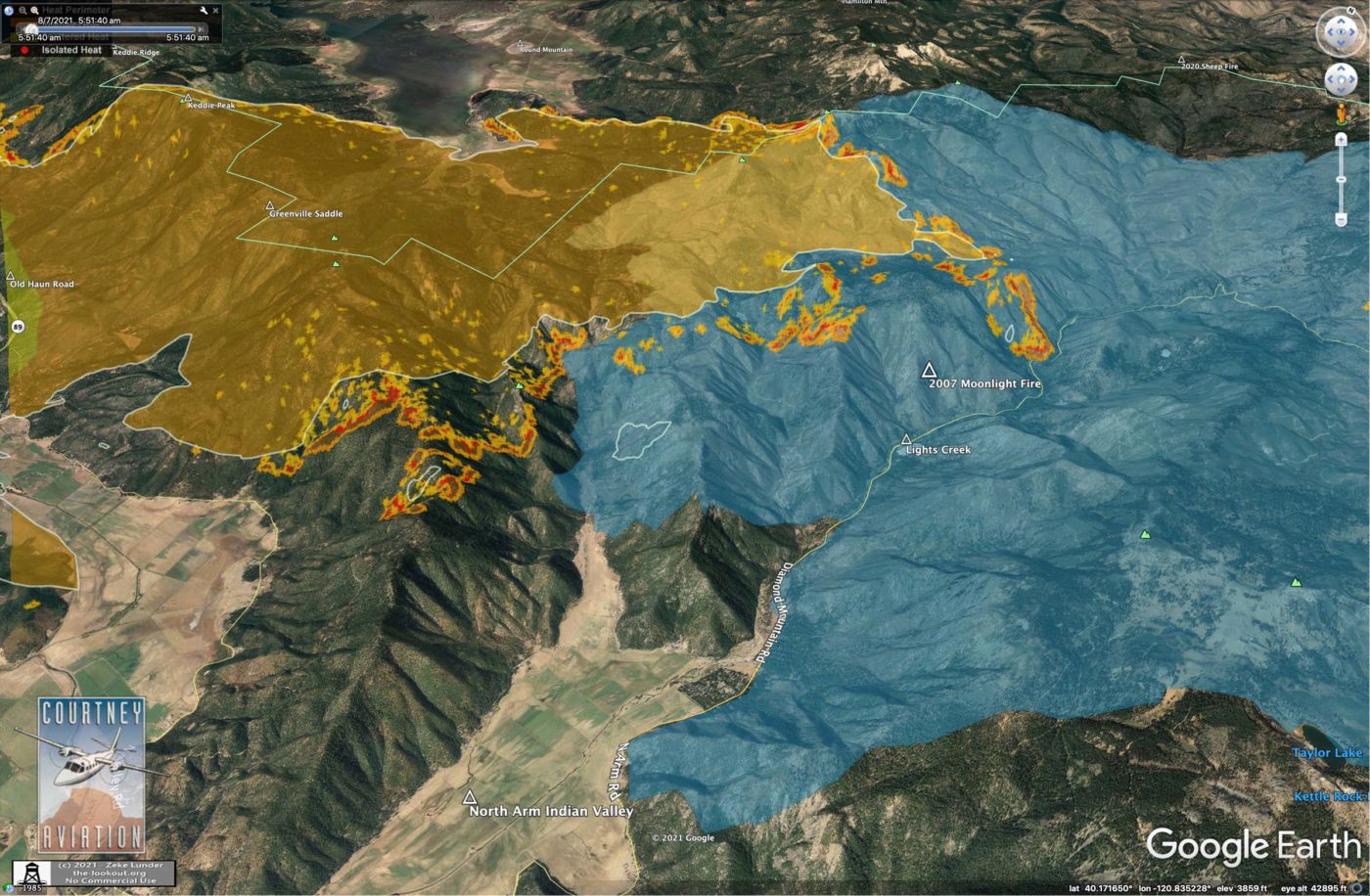 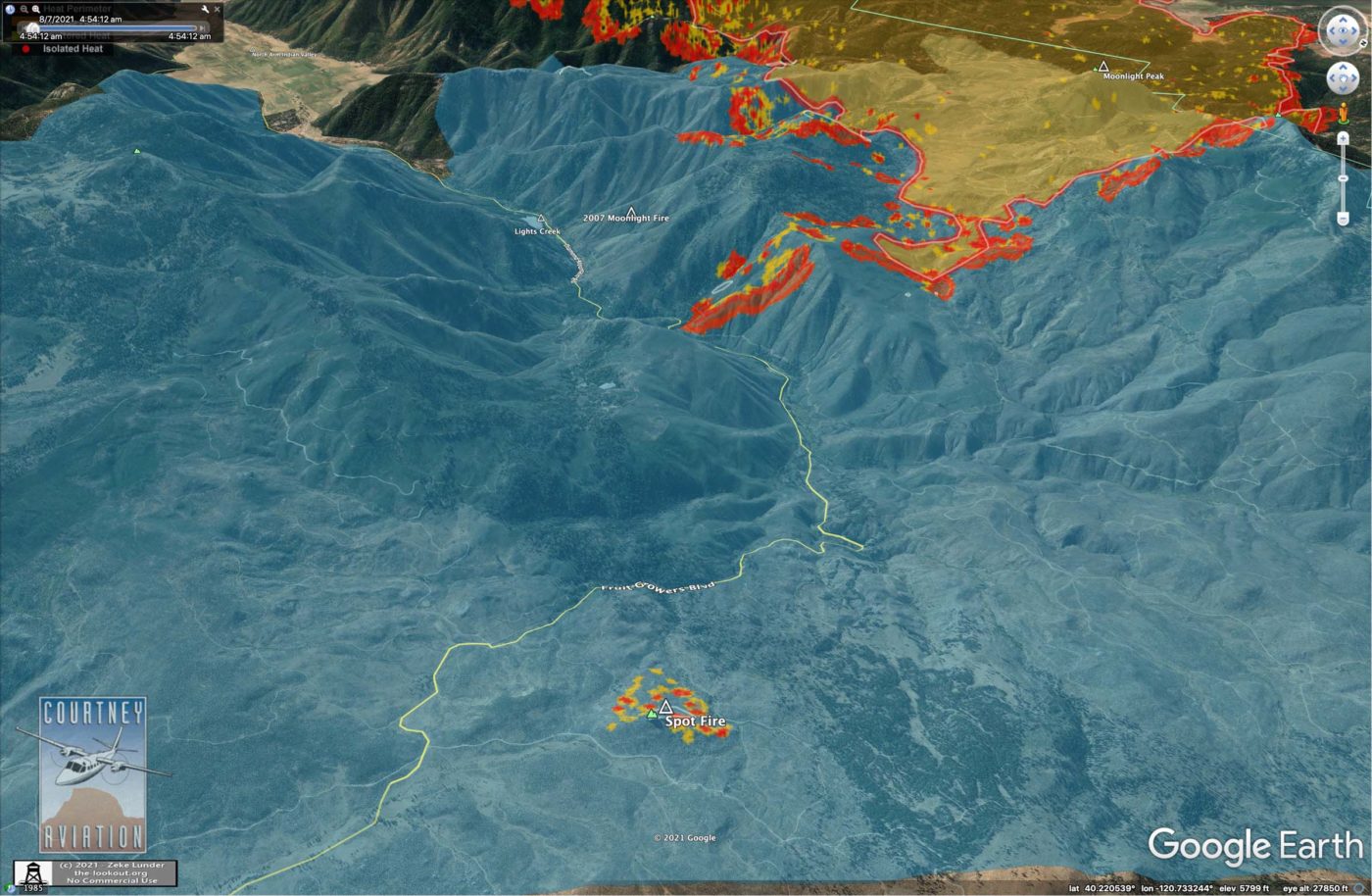 The spot fire in the Moonlight Fire on Lone Rock has grown to about 75 acres since yesterday. 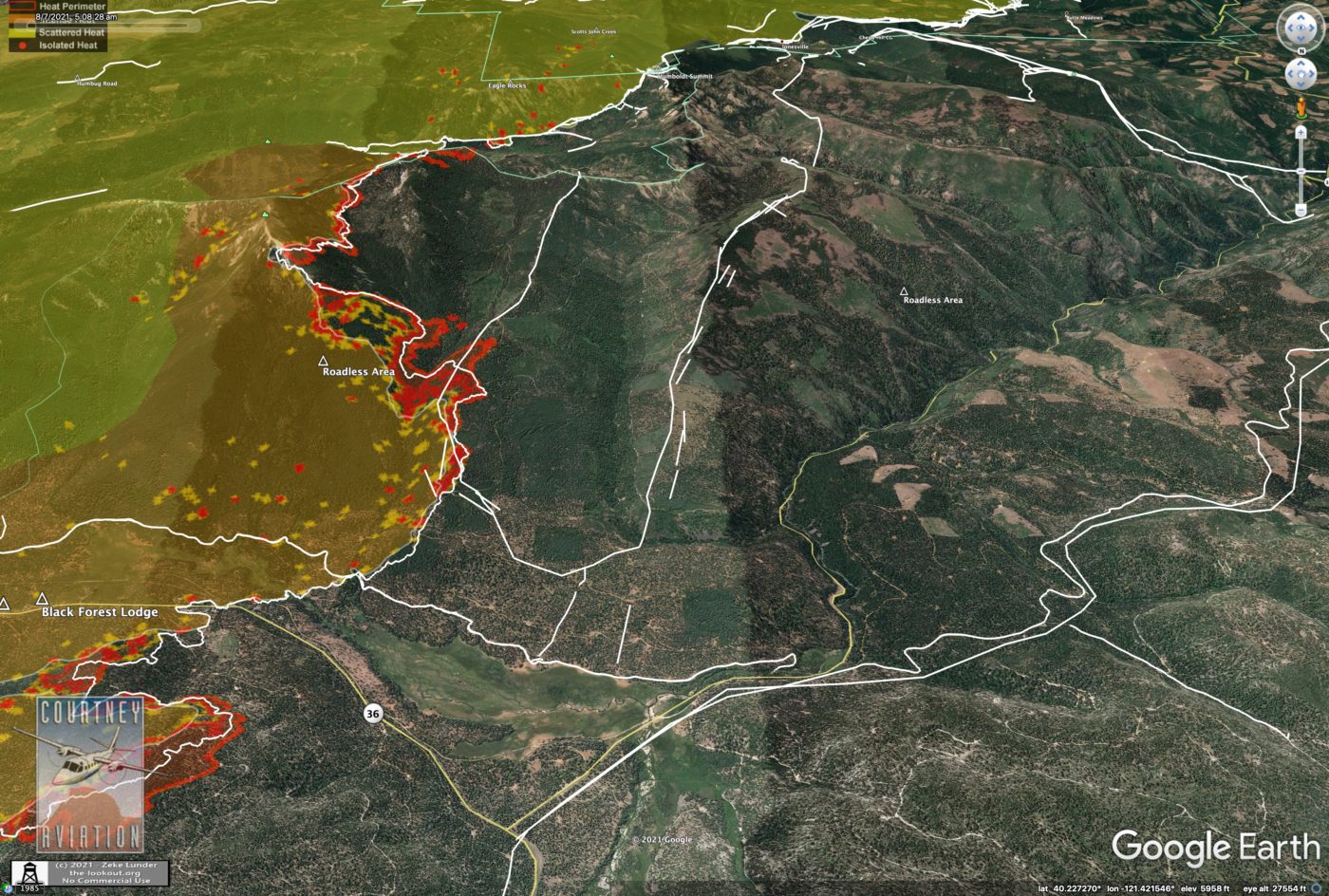 Jumping to the far western edge of the fire, this looks over the Highway 36/32 junction down Deer Creek. highway 32 runs to the left. The fire is flanking slowly across the roadless aras of Butt Mountain. There are dozer lines on the the ridges, one set of which have been spoted over. The next ridge is last place to stop the fire before it is into the inaccessible areasa of the Cub Creek Roadless Area. There is retardant line along the dozer line up the center of this image. There is also contingency line on the Collins Main Road 1, which runs from top of Highway 32 at Deer Creek Meadows down the plateau between Deer and Mill Creek. This has also been painted with retardant.

That’s all for now. Hope everyone stays sane with all of this smoke, and just remember the smoke is good for the firefight, even though it’s hard on us humans.