Good evening. It was an active afternoon on two portions of the fire today. The smoke cleared out a little and northern and eastern flanks of the fire started to become active about 12:30 today.
Most of the rest of the fire had relatively minor spread.

Two areas of concern:
1. The northern edge made a push about 2-2.5 miles across the South side of Swain Mountain. This threatens the primary containment line at County Road A-21.

2. The northeast flank of the fire pushed up the SW side of Coyote Peak, and ran about 2-2.5 miles into the Moonlight Burn.
The spread to the east through the Moonlight Fire is concerning because this side of the fire could threaten the Elysian Valley area as it moves east.

There is a significant buffer between today’s eastward run and Janesville in the form of the 2020 Sheep Fire, but the Dixie Fire could outflank the burned area with the right NW winds (some are forecast sunday night/monday morning). The spot fires tonight in the Moonlight Fire area look like they are close to the bottom of a steep drainage that is full of brush, down logs, and dead branches from the 2007 Moonlight Fire. It’s been a few hours since the imagery was captured, and I don’t have any good ground intel on whether or not the spots took off or got wrapped up, but it is worth keeping an eye on. Maps below. 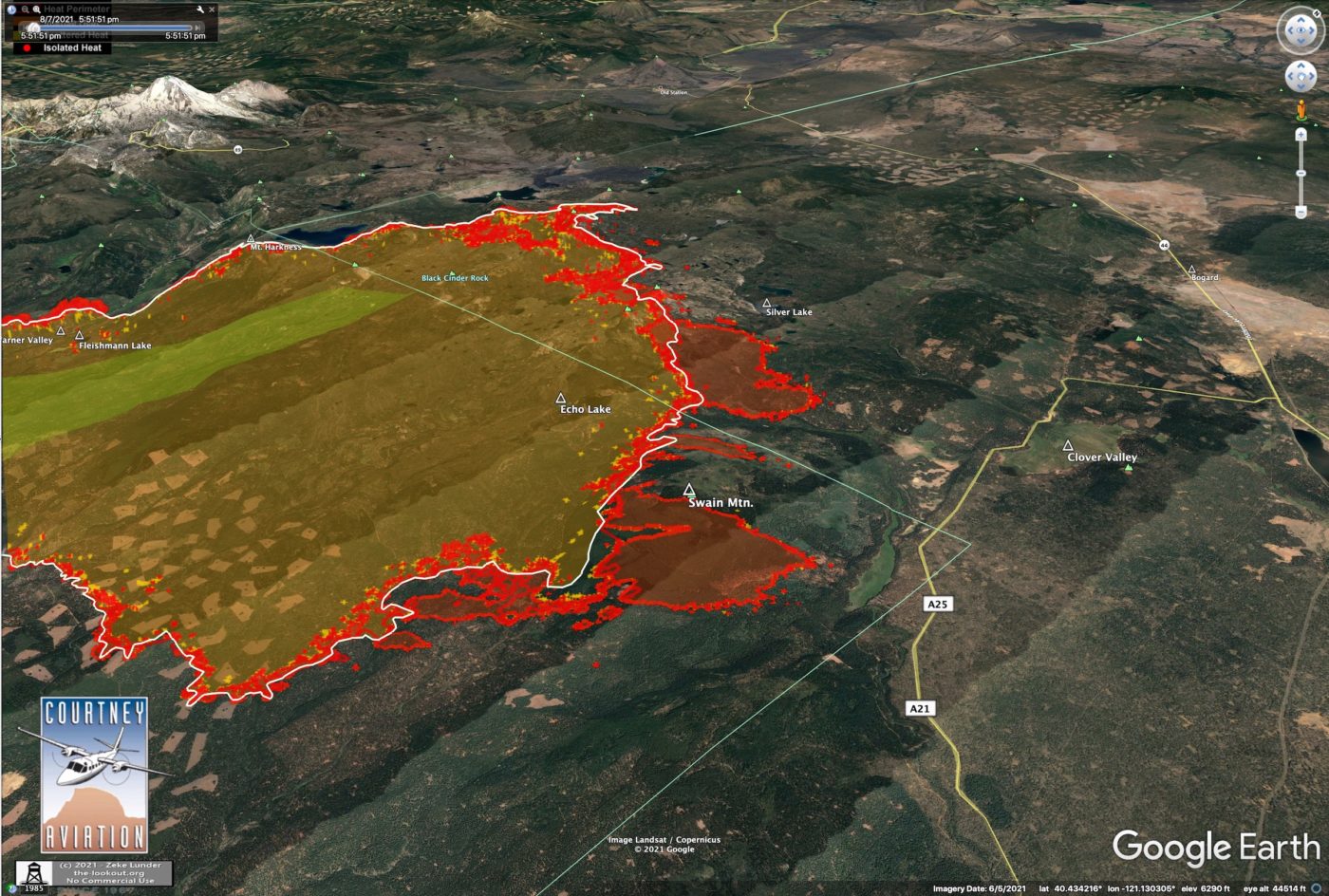 The push across Swain Mountain is concerning because the fire ran up to 2.5 miles, spot another 1/2 mile ahead, and the main body of the fire was only 1.5 miles from A-21 at 6:30 pm. This raises the likelihood the primary plan of containing the fire west of A-21 isn’t going to pan out. As I said this morning, the higher elevation areas on the edge of the fire are less impacted by the smoke inversions than the canyons, as we see with the fire starting to run at 12:30. 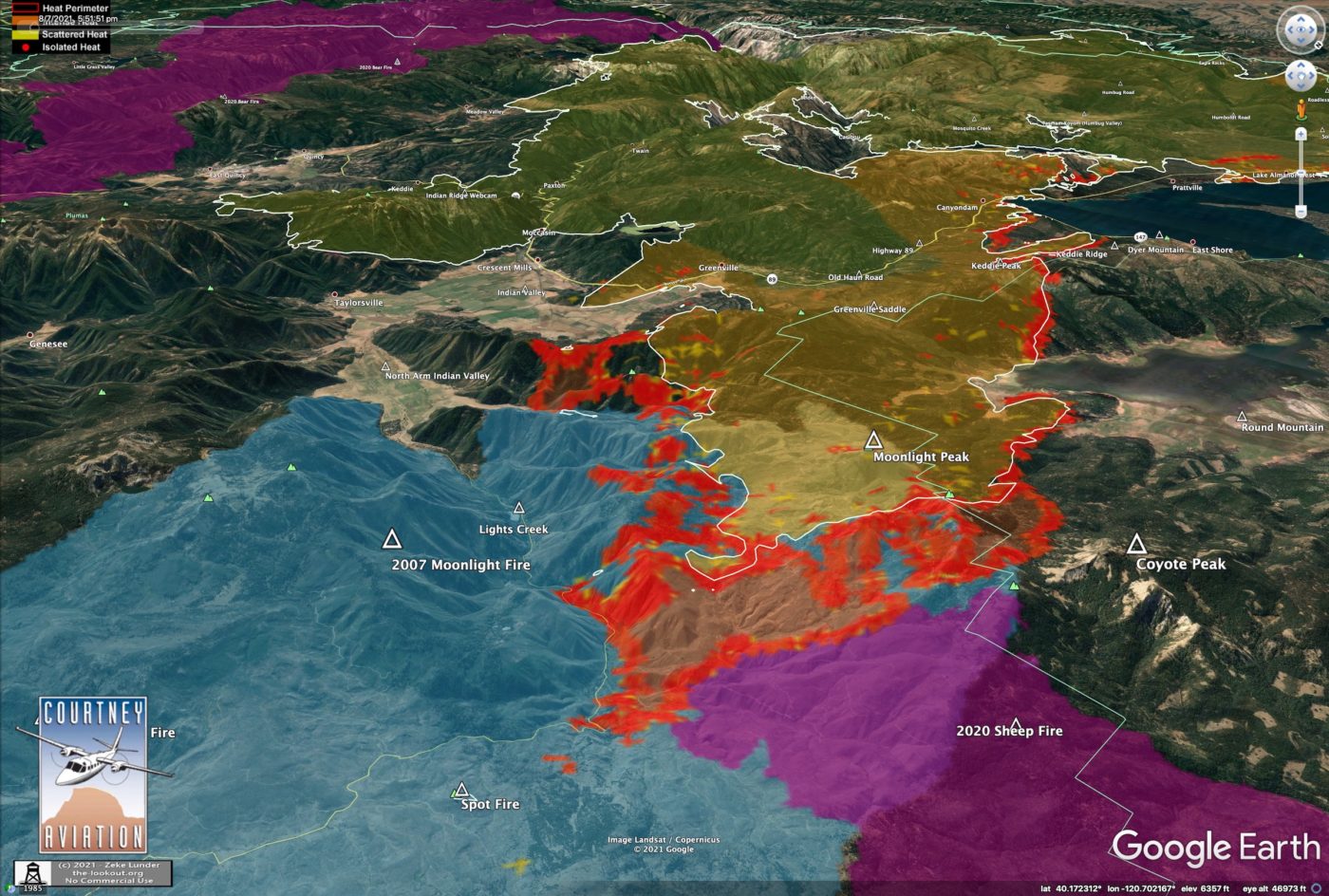 The fire spread NE and ran into the 2020 Sheep Fire burn. It spread readily in the Moonlight Burn area, moving through both areas of brush and down logs on public land, and through tree farms planted after salvage logging on private lands. 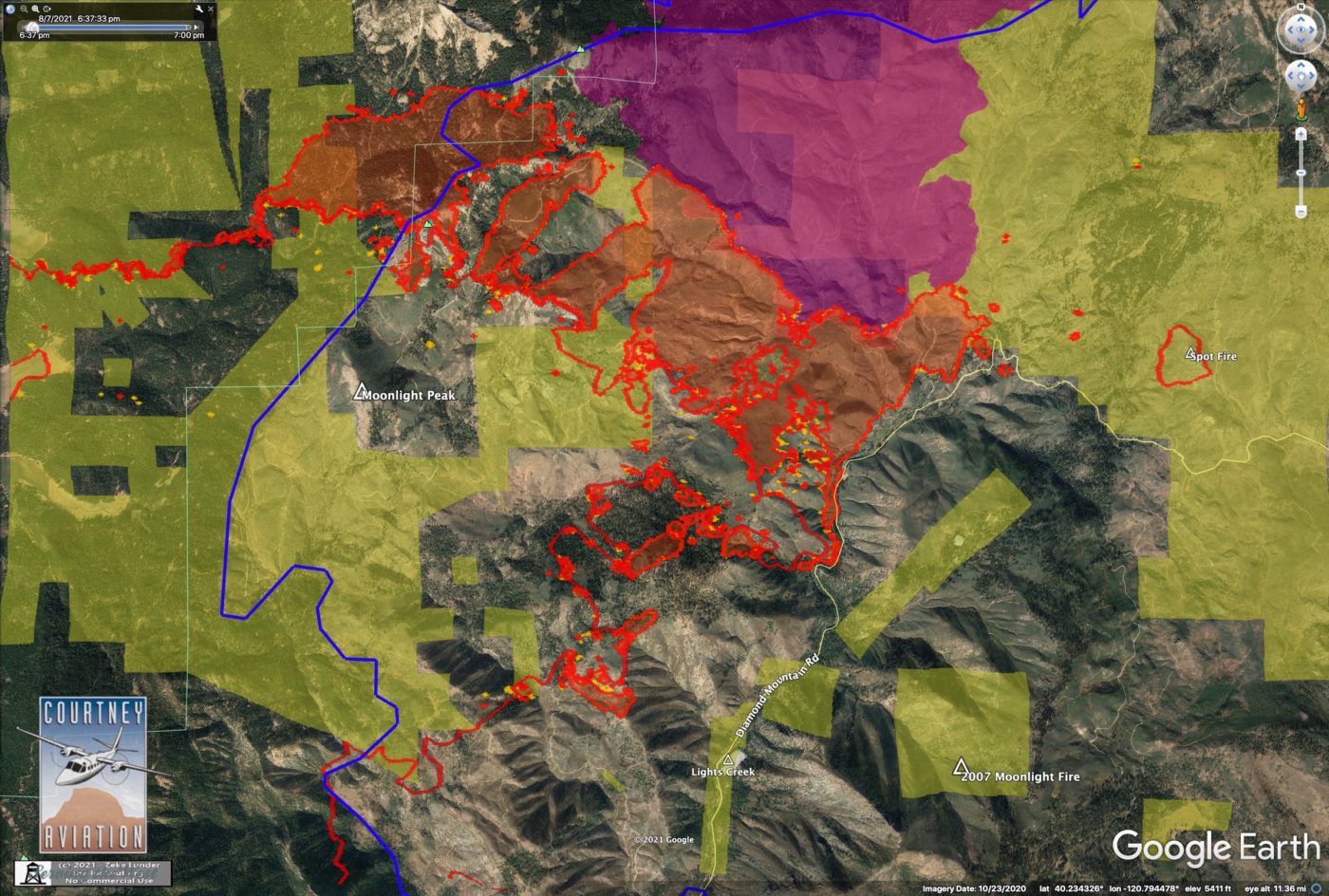 Fire spread into Moonlight Burn (blue outline). Fire ran about 2.5 miles today, with spots out 1.75 miles ahead. Yellow land is private timberland, much of which had extensive cleanup, including herbicide application after salvage logging and replanting. Much of fire spread stopped where it ran into 2020 Bear Fire (purple). Spot fire is in a place where it may be able to take off into heavy brush and down woody debris in areas unlogged after Moonlight Fire.
Spot fire on right we have been talking about past few reports didn’t appear to grow today. 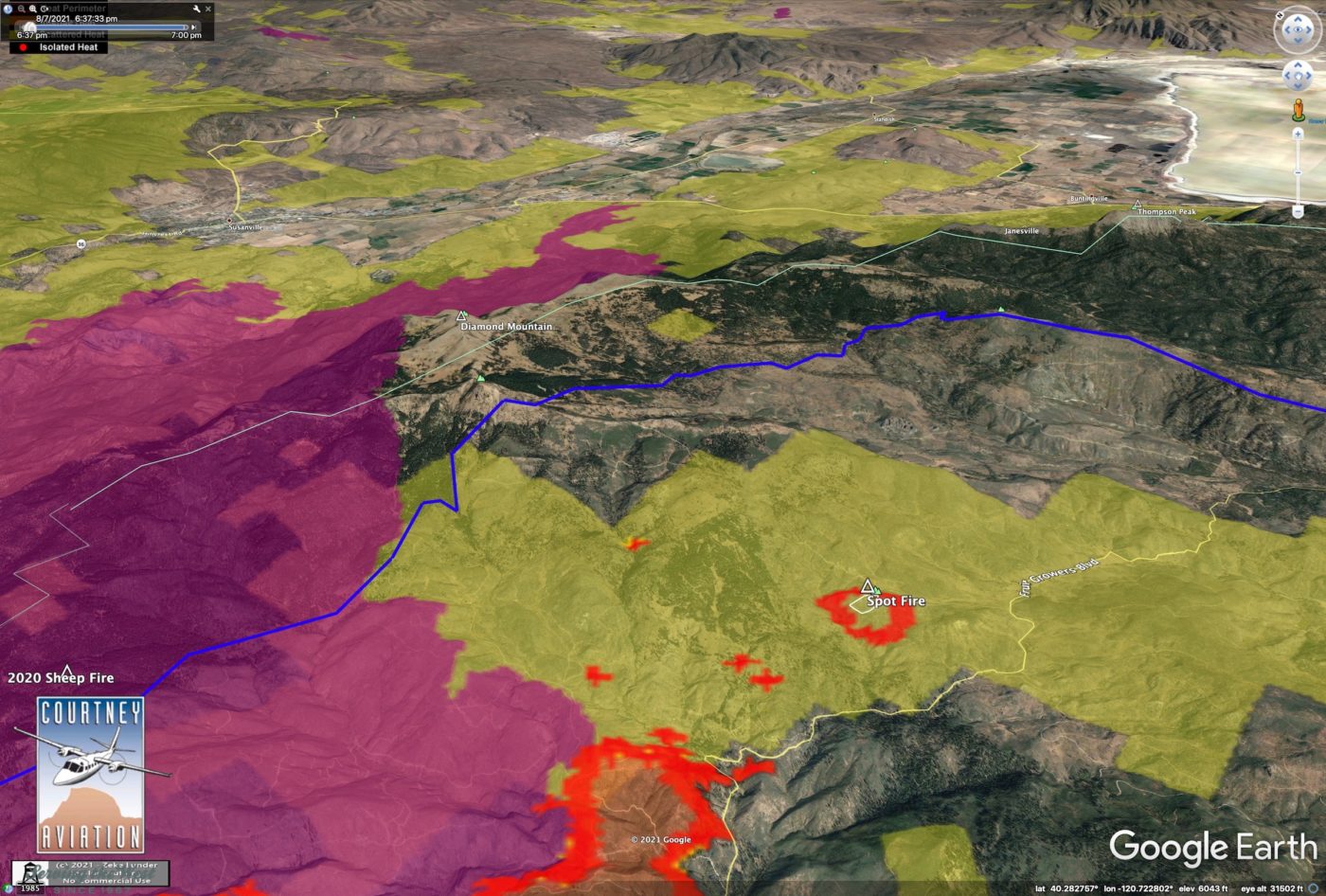 Spots out in front of today’s spread in the Moonlight Burn (blue outline) are problematic. 2020 Sheep Fire in purple. Yellow is private lands. 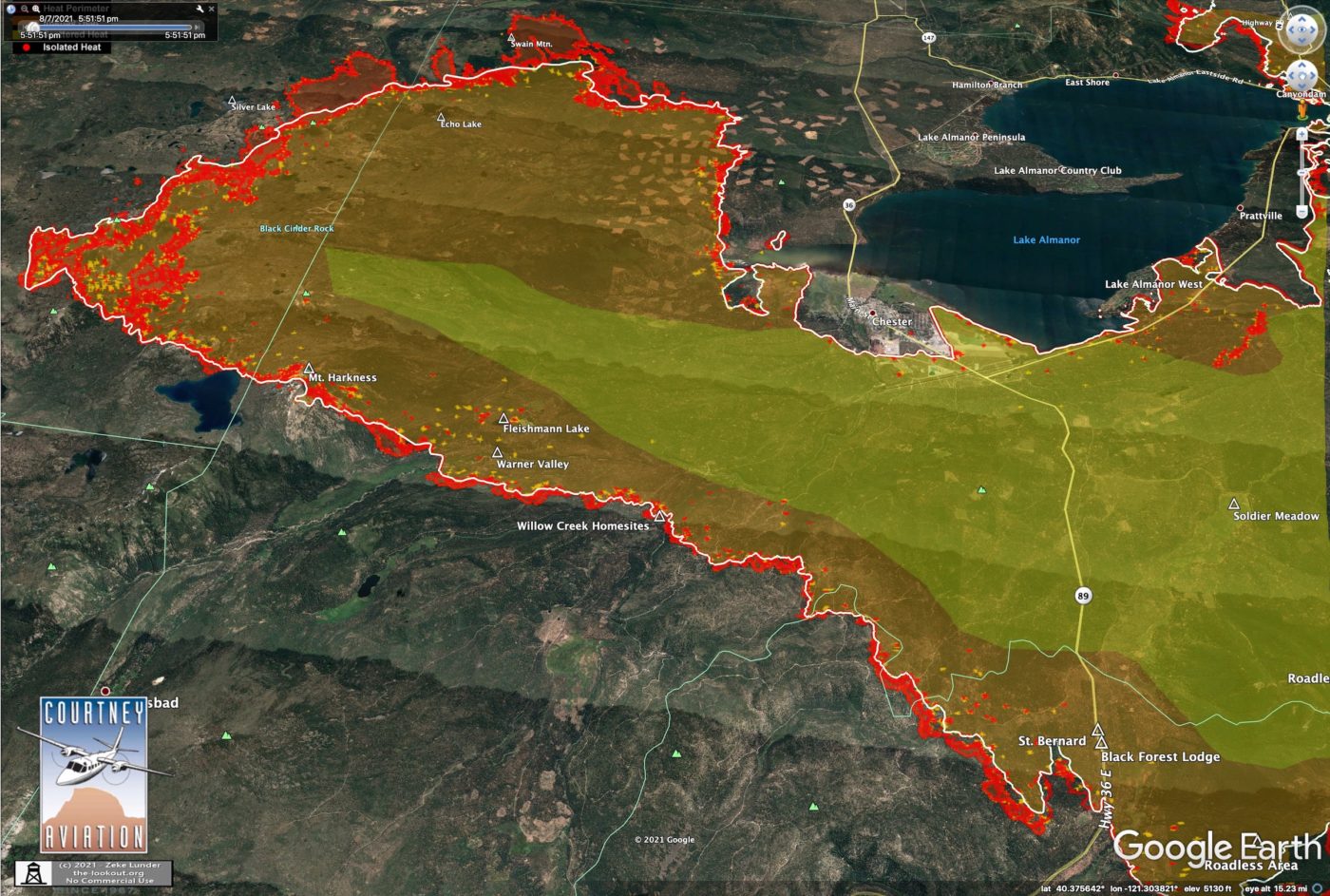 There was minor flanking spread (none more than 1/4 mile) on the fire to the west toward Willow Creek Homesites. 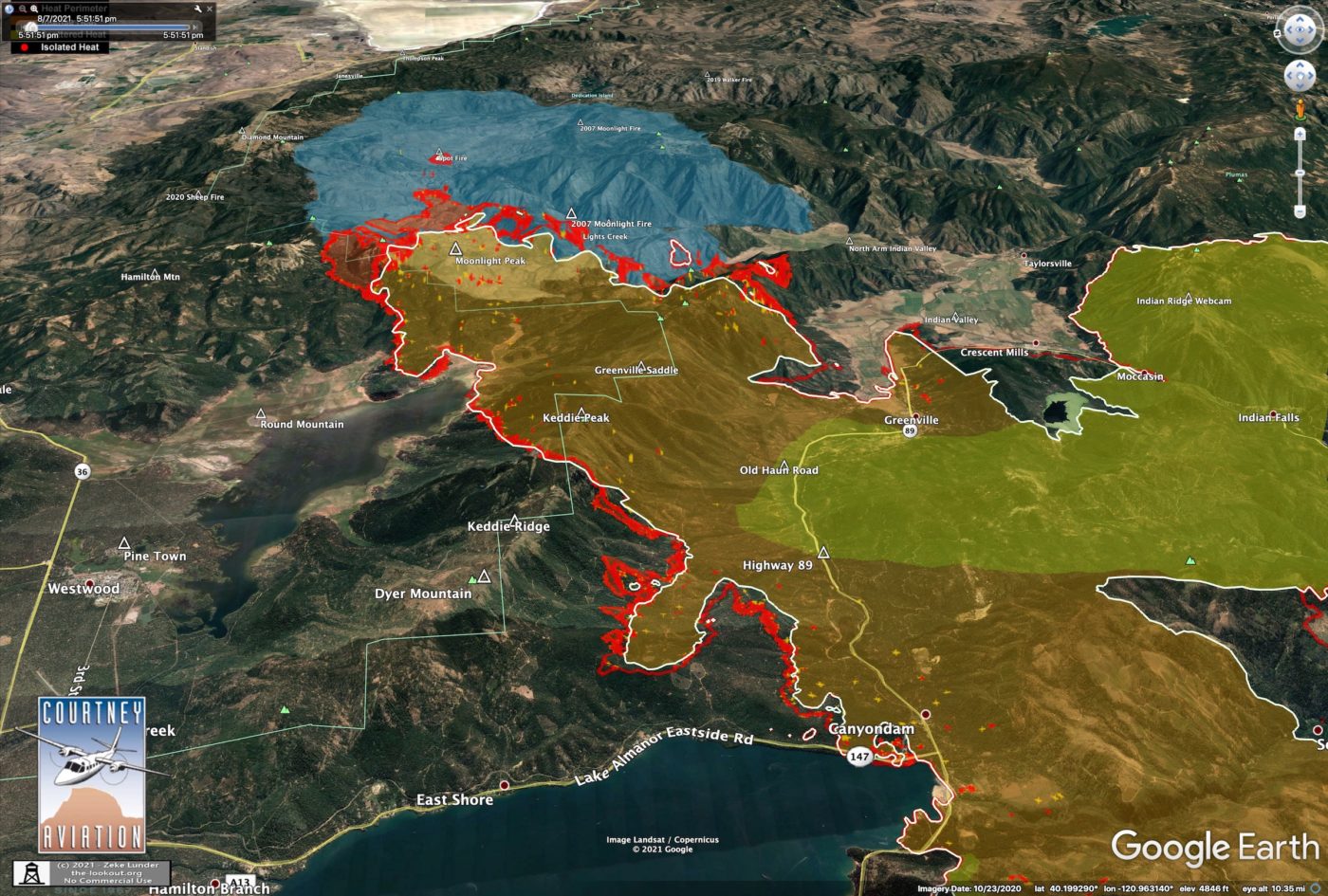 There was some spread on the flank of fire north of Canyondam. The finger across the slope is making a bit of a run up toward Dyer Mountain. 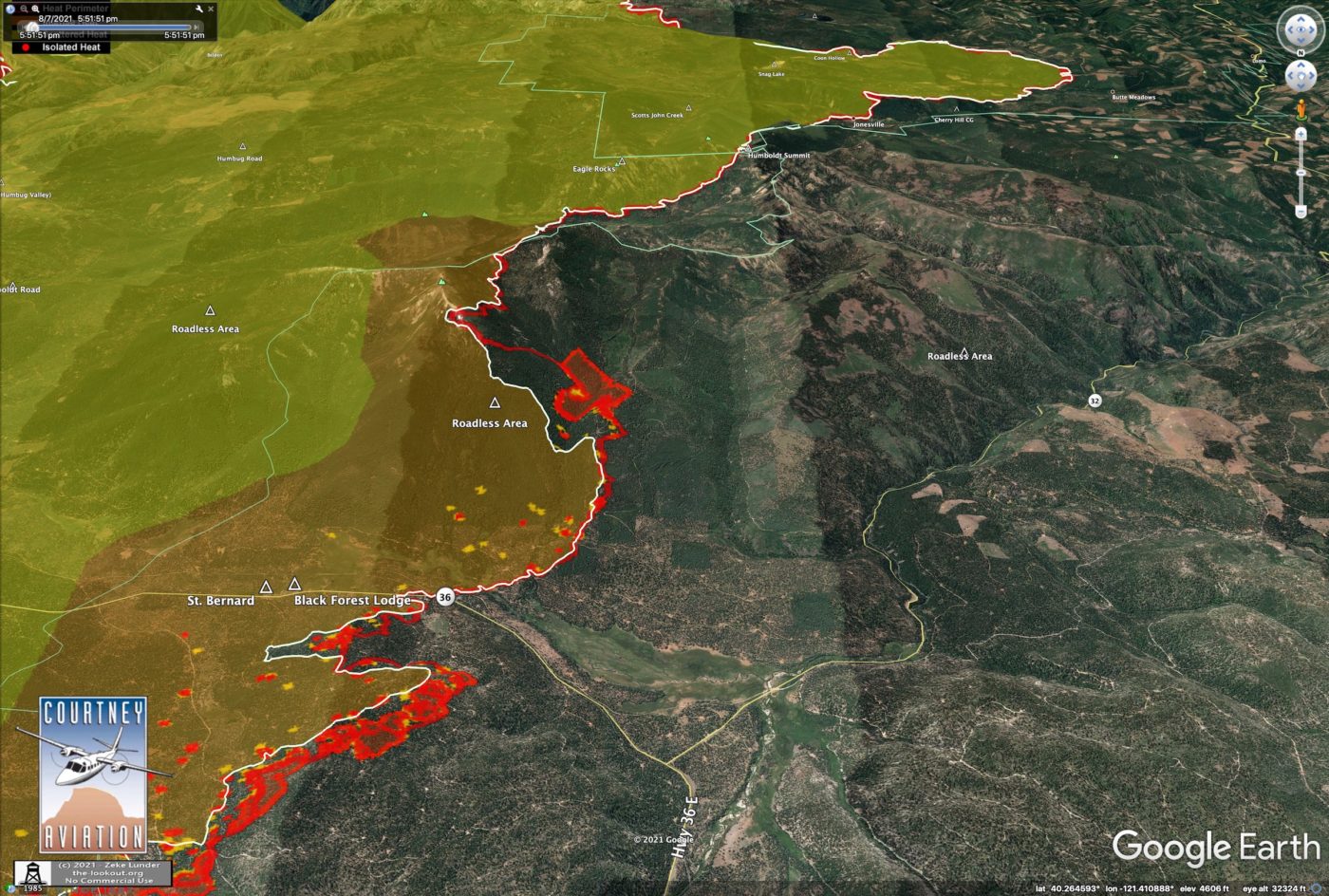 That’s all for tonight.