I do not have a lot to report about the Dixie Fire today. Heavy smoke blanketed the fire all day. This, coupled with mild winds, helped moderate fire behavior. Looking at the big-picture weather satellites, it looks like the fire spread on its edges, to the west and east, but not very far.

Fires need to breathe. They don’t like sucking smoke any more than the rest of us. When the atmosphere is unstable, the smoke moves right out, and fresh air can circulate in to feed combustion.
So we all sat in smoke together today, and even though we can’t breathe very well, it was kind of a good thing. 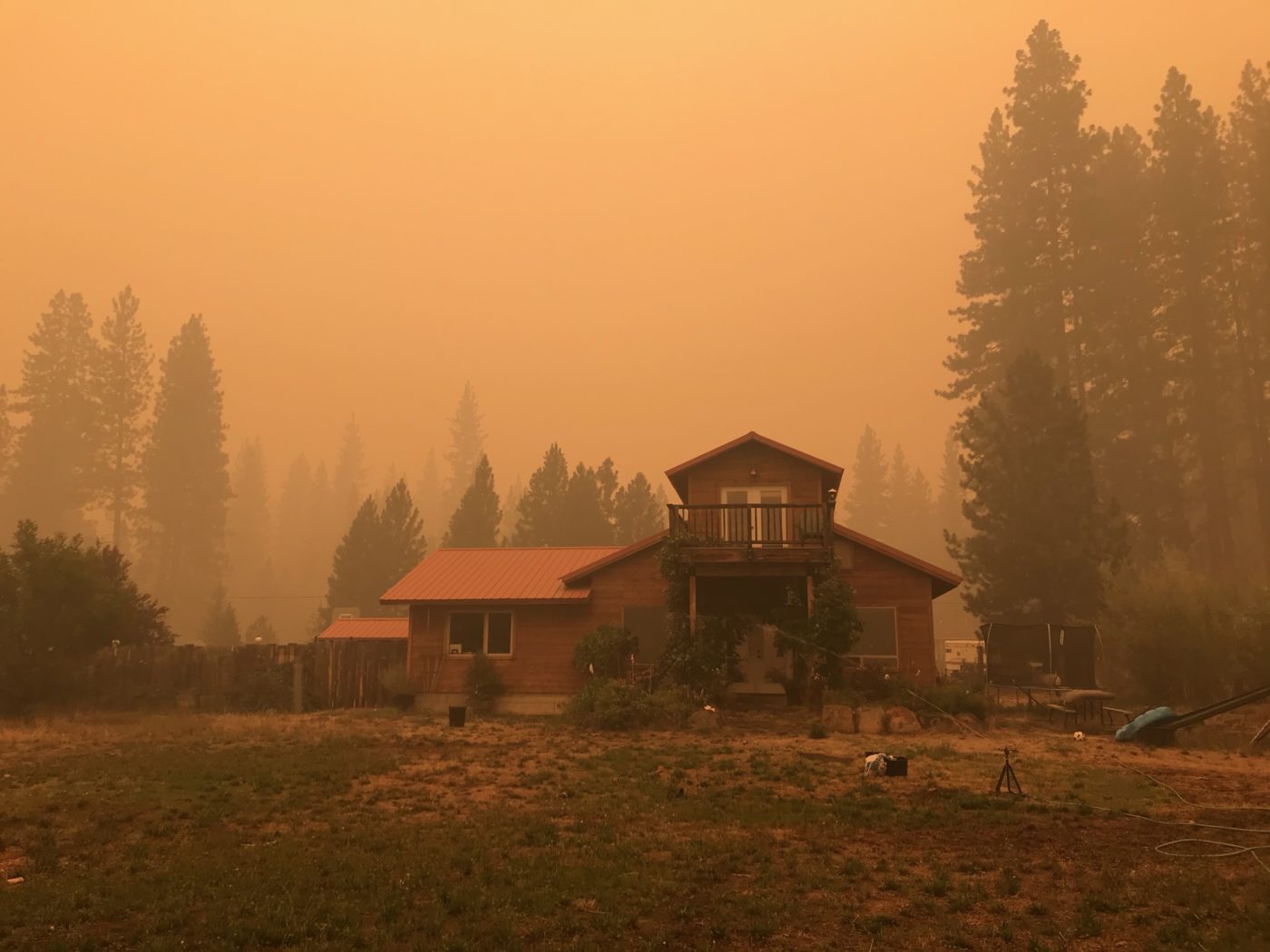 Best news today was my brother’s place in Indian Valley has survived so far. My folks place in Westwood still sits between the pincers of a giant angry lobster, waiting to see which side will be the one to hit first.

What we are seeing here with the fire taking a breather is very typical for when we have large fires burning on across the landscape. Often, after a frontal passage, high pressure sets in, and we can have days or weeks of stable air over the State. The monumental size of this fire means a monumental amount of smoke, and under a stable airmass, it just packs into the canyons and valleys. Sometimes in the afternoon, there is enough lift from the peaks to stir things up and the inversion lifts, letting the smoke out. Firefighters live and die by the lifting of the inversion. Often, in the Klamath Mountains, Trinity River or Feather River Drainage, we only get a couple hours of active fire behavior in the peak of the afternoon when the inversion lifts. If you are sitting on top of a slope that has been slow roasting all day, preheating everything and starved of oxygen, when the fire gets fresh air, look out! We call it ‘taking the lid off of the pot’, and it is pretty much the same as opening your BBQ after you have smothered a good fire. The heavy smoke causes other problems for firefighters. After a young firefighter named Andy Palmer got struck by a falling tree in the Trinity River in 2008, it took hours to medevac him in part because the helicopters had to wait for hours for the smoke to clear before they could hoist him out. He died because of the delay.

But in our case, all of this smoke is a good thing, and the longer it stays packed in over the fire the better. It sounds like crews got a lot of opportunities to catch up with the fire today, scout firelines, and build new ones. As we saw last week, there is no guarantee all of this work will hold up if conditions return to extreme, but a lot of it will, and we’ll take anything we can get at this point.

Fires in the Coast Range have been kicking ass, too.

Forecasting when the inversion will lift is a major challenge. The fire weather forecast for today predicted things would clear out today early afternoon but they never did.

As I mentioned earlier today in a tweet, we often get beneficial fire effects when fires smoulder under heavy smoke. It is important to remember that even in the middle of a drought in August, fire does a lot more good work in the backcountry than we are able to get done with our (pretty much non-existent) prescribed fire programs. With so much fire on the landscape right now, when the smoke settles in, a lot the fire happens to be in the perfect place to either back slowly down a mountain, or more slowly sidehill. One reason this happens is because the fire has just spent the past few days running unbridled, hauling-ass up every mountain within reach, and so most of the fire right now doesn’t have a slope to run up, and is going to be backing down the other side of the hill or sideways. This is exactly what we’d be doing if we were trying to prescribed burn these mountains – light the top, let it back down slowly. 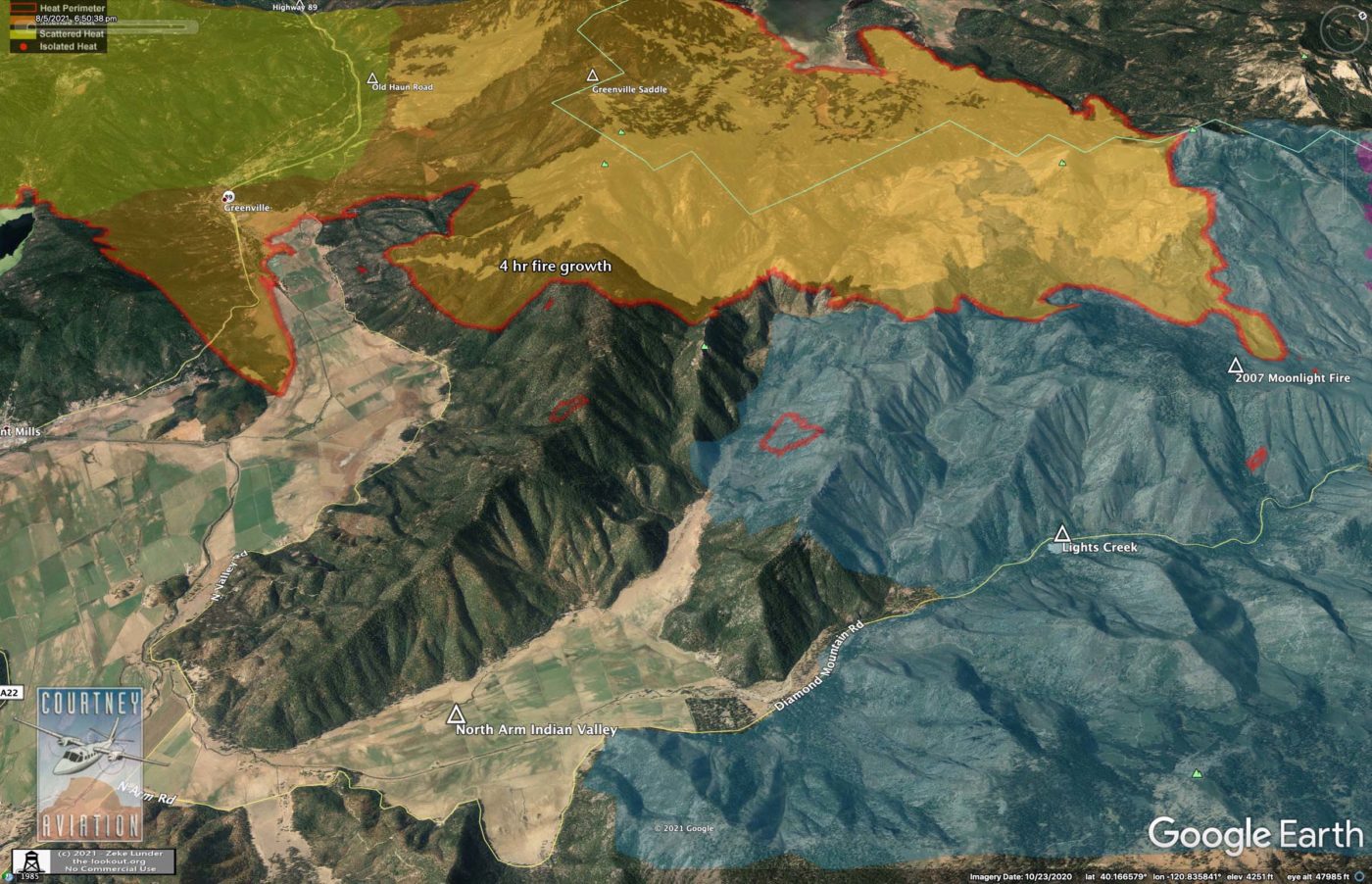 Where the fire was at this morning – not a lot of mountain for it to run up, so it will back down slowly under the smoke. If we get lucky, it gets to the valley still behaving like this and we save a lot of the homes. But if the lid comes off the pot again, well Greenville shows us not all backing fire is friendly. There is just a lot of luck involved with all of this.

On average, between 1987 and 2008, less than 20% of forest areas burned in NW California had high severity (all the trees killed). So we know the whole Dixie Fire isn’t just going to be a moonscape after this fire, though there will certainly be a lot of black sticks in places the fire has just made its monster runs.

Here are some images from earlier in the Dixie Fire of areas that burned under heavy smoke a few weeks ago. Green areas still have an intact forest canopy with green needles. 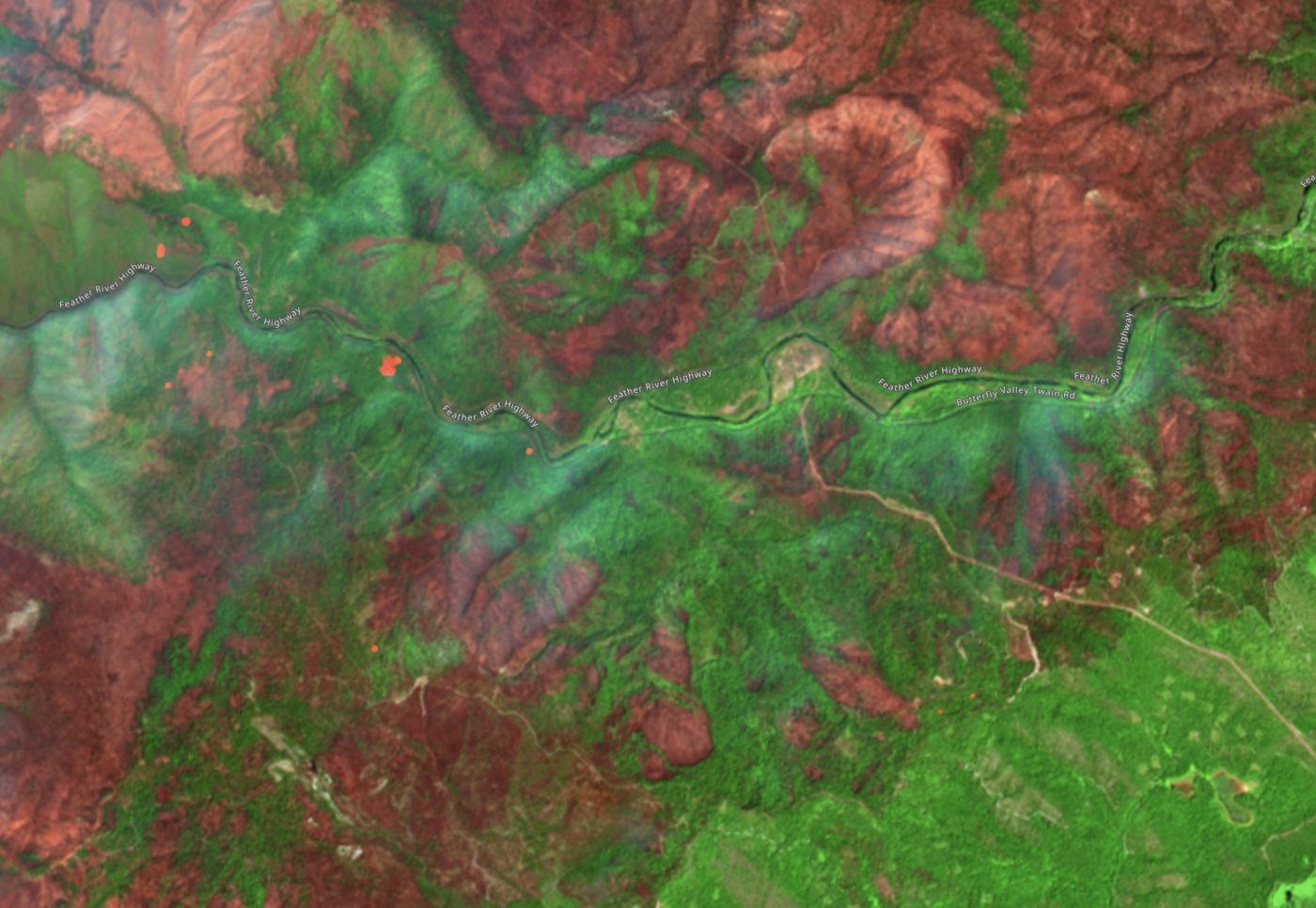 We are supposed to get an orbit of this same satellite tomorrow, but the smoke may be too think to get usable imagery. We’ll get some imagery once things clear out, though, and it’ll be our first real big-picture look at what this fire has actually left us to work with.

Here is another image showing the ‘burn mosaic’ or fire effects from the part of the Dixie Fire that burned up into Bucks Lake Wilderness. 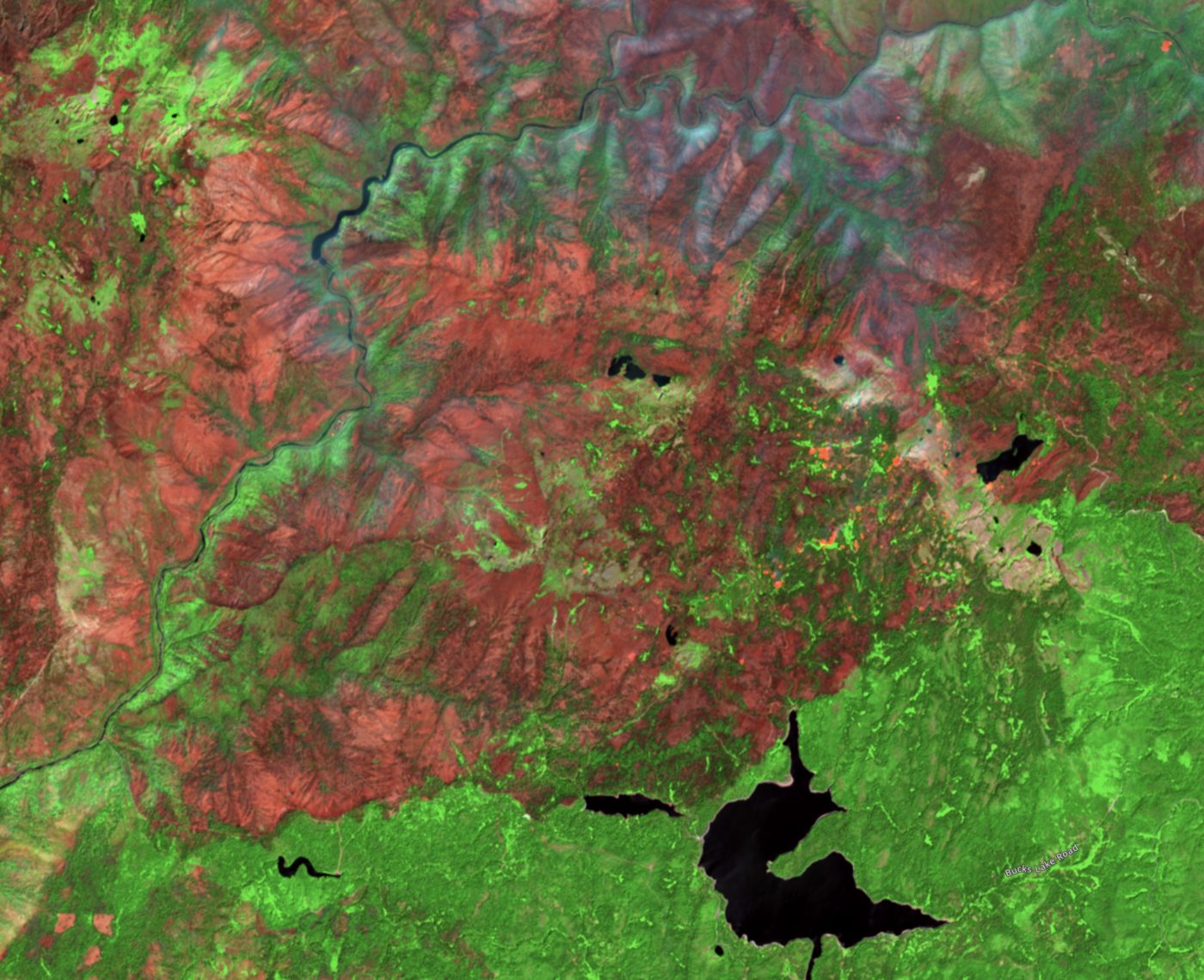 Satellite image captured 8/2/2021, Bucks Lake. The High Lakes area is on the upper left. Sheltered areas in the Canyon still have green trees (which have survived many past fires).
Time will tell how much green the next set of satellite maps have on them.