The fire continued to burn actively on the north flank between Swain Mountain and County Road A-21, and on the east flank north and east of Moonlight Peak.

The fire did not spread as far today as yesterday in these areas. Several spot fires crossed A-21. I don’t have any intel yet on whether or not they were contained. Holding the fire at A-21 would be a major win.

All of tonight’s maps were captured between 6-7 pm. 8/8/2021. There are collection times in upper-left corner. A little farther south, on the flank west of Highway 36 and A-13, the fire made a few 1/2 mile runs, but didn’t do a lot, or move much closer to the Peninsula or Clear Creek. 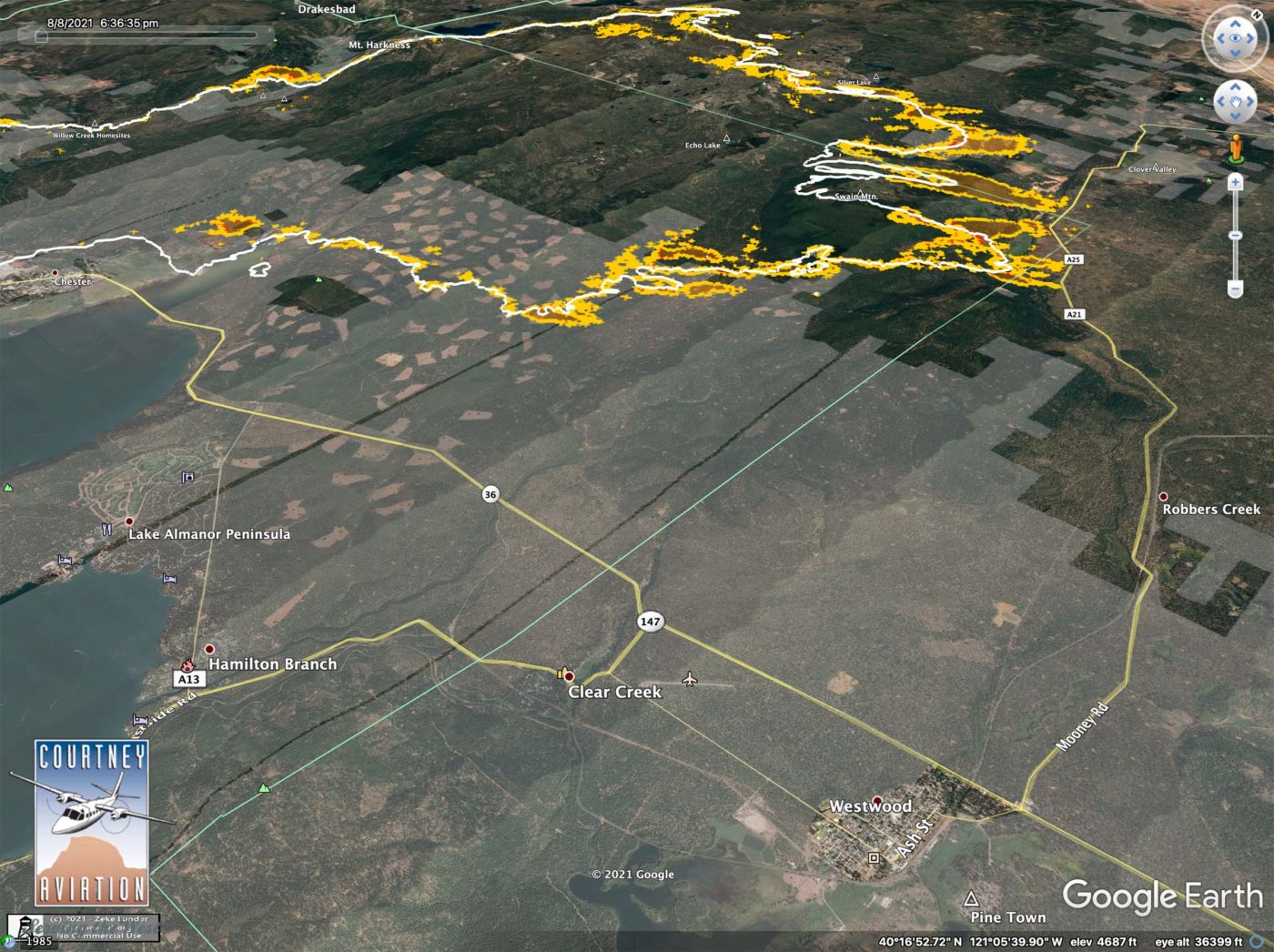 The fire spread east in the Moonlight Burn. Spread was primarily in 2 areas: In heavy timber on the east side of Coyote Peak, and NW of Lone Rock. The fire ran into the 2020 Sheep Fire on the east side of Coyote Peak and stopped. South of that it is moving relatively slowly across plantations established following the 2007 Moonlight Fire. Light blue areas are private lands, most of which were logged, cleared, and replanted after the Moonlight Fire (blue). The dark blue area on left is the Willard Fire, which burned in 2016. The portion near Lone Rock (center-right of map) was spreading in forest where many of the larger trees survived the Moonlight Fire. Smaller trees were replanted under these larger trees following the Moonlight Fire. The farthest-east spot fire from last night grew to 2 acres, but did not appear to take off into the heavy fuels on public lands I was worried about last night. The east part of the fire spread about a mile closer to Janesville, but is still about 8 miles from Elysian Valley. 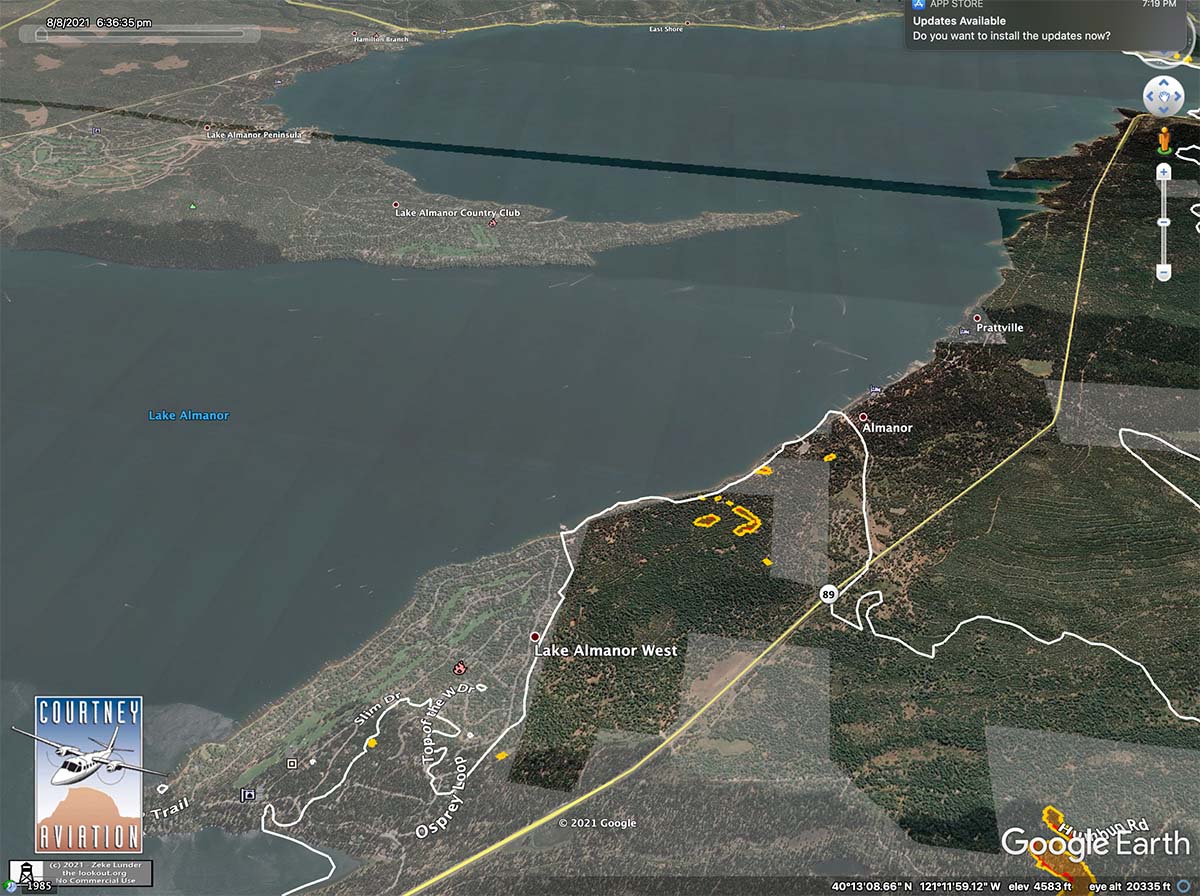 There was no new spread in Lake Almanor West or Prattville. There is some residual heat in areas that were fired out between the road to Almanor and LAW.

The fire on the south side of Dyer Mountain spread over Keddie Ridge today, crossing over the top and down around Deerheart Lake. Another look at fire spread over Keddie Ridge near Deerheart Lake. The area around Stroing’s Ranch at far end of Mtn. Meadows Resevoir looks pretty cold. There was some westward spread onto Kelly Mtn above Warner Valley, but not a lot of movement to west here. There are dozer lines being put in on the west side of the fire, but firing operations have been problematic, with most of them resulting in losing the line. I’ve heard there are only maybe 2 hours a day, in middle of night, when firing seems to be working. Extremely tough conditions. 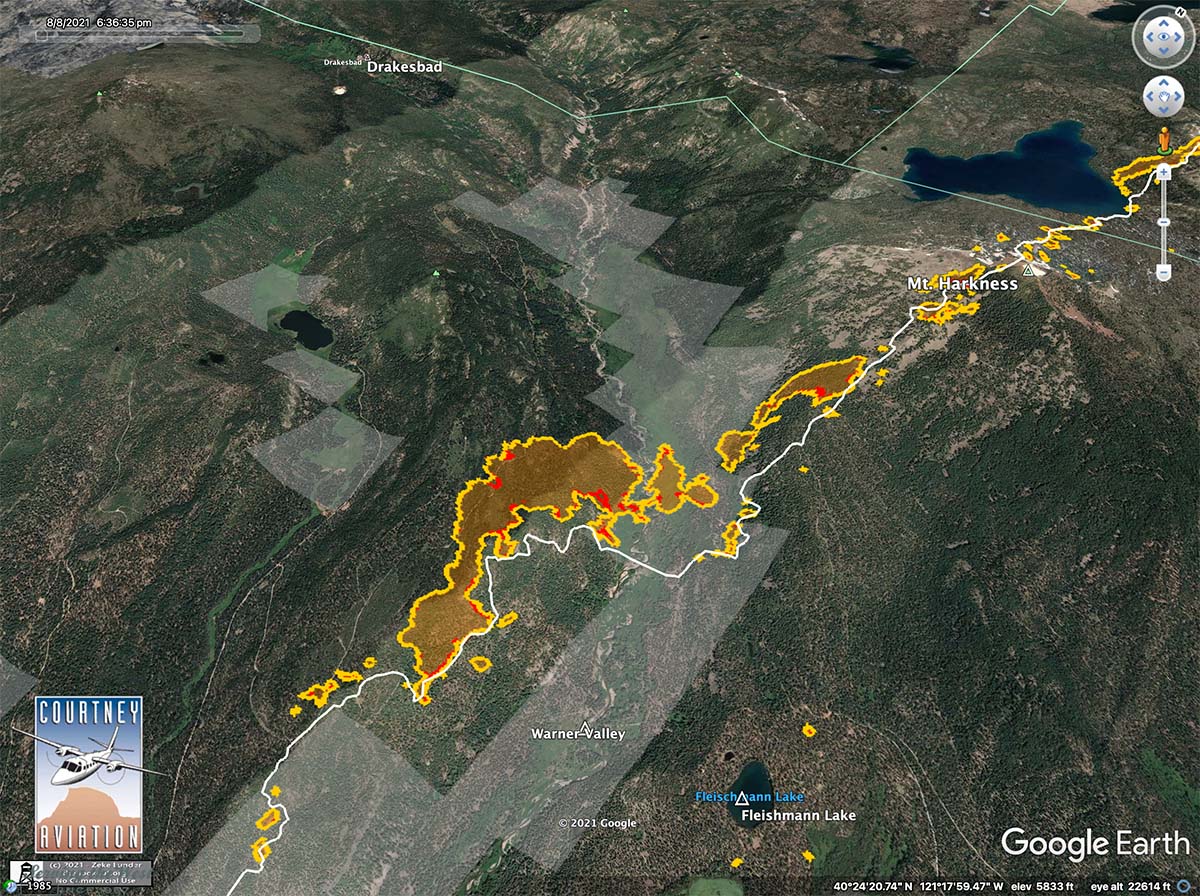 Slow westward spread continues in the top of Elam Creek, above Highway 32. 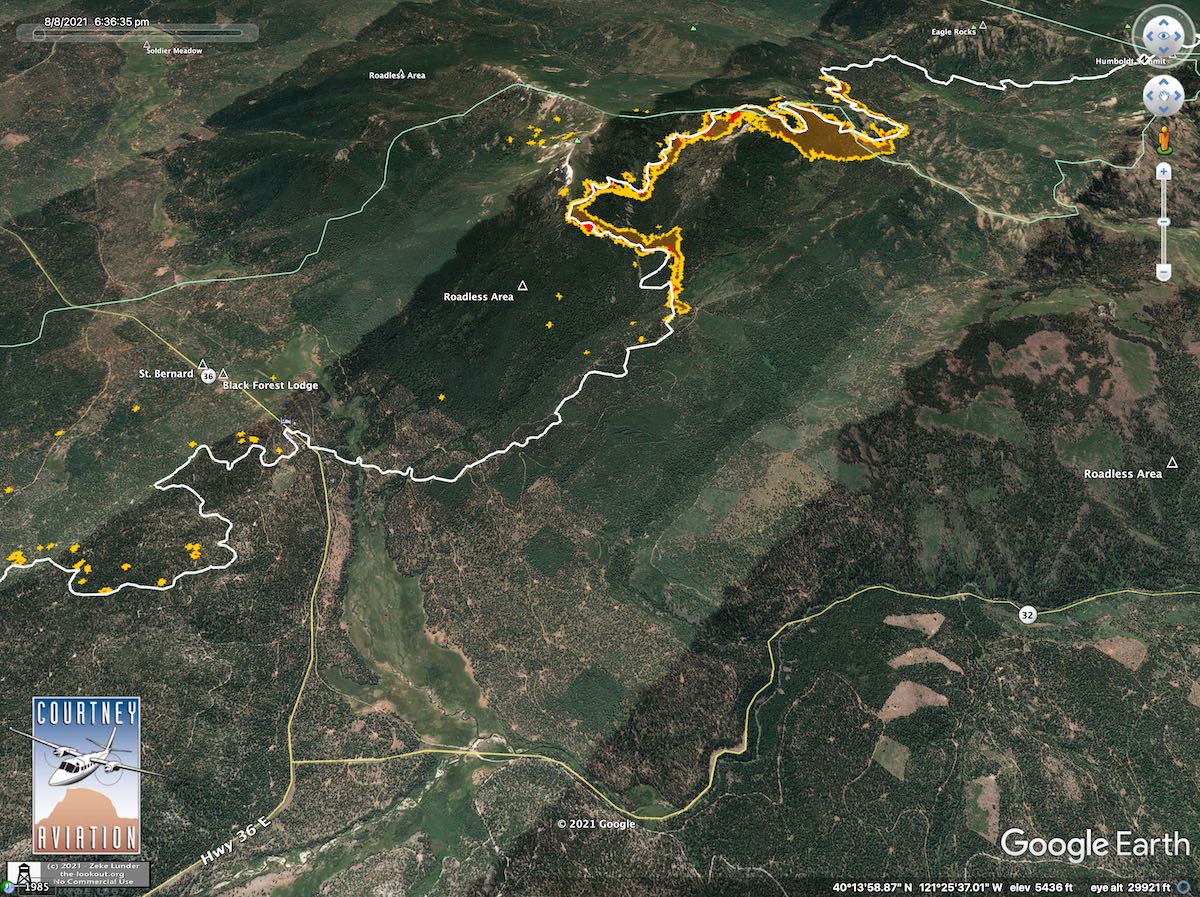 The worst news I got today wasn’t about new fire spread – it was about the areas that have already burned. I did some work with some satellite imagery captured yesterday to make this map of the burn severity. It shows a shockingly large area where most of the foliage is dead. I haven’t been out on the ground to see any of these areas, and there is a lot of smoke in the imagery, but this first peek at the ‘big-picture’ is worse than I was expecting to see. Even areas I was hoping to see underburned with backing fire on Keddie Ridge look like they burned really hot. Brown areas in this image have high severity burn. Blue areas and darker green areas have live foliage. 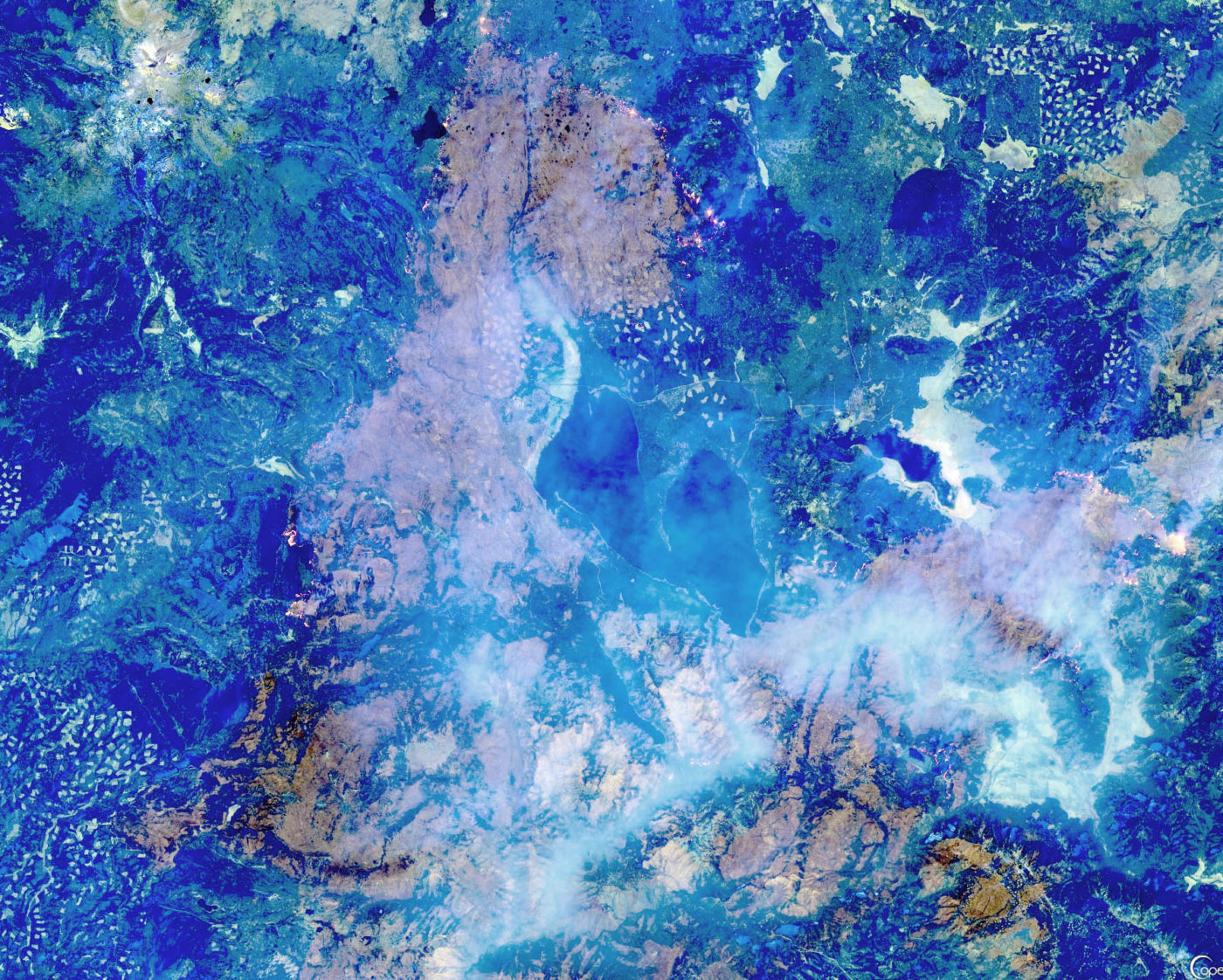