The fire burned actively today on the fronts which are still hot. Things seemed to be most active around 4:00 pm. Smoke limited visibility on the webcams. This intel sleuthing means working with all the tools we have, and the platforms that update the most often are the ones that have the coarsest texture. Even so, there is something to learn from all of them. For example, the GOES-17 weather satellite updates all day long, and has heat sensors. Even though it is super-chunky, it is useful in that it shows how the heat of the fire pulses throughout the day. It can help identify the time of day things burned the most intensely. Today that was at about 5:30 pm (click for animation link).

All IR imagery today captured at 6:30 pm, and as with past days, white lines show 24 hr spread.
The flanking fire on Keddie Ridge along the Taylorsville Dump Road made a major run to the south. Fire has spread 1 mile in past 24 hours. 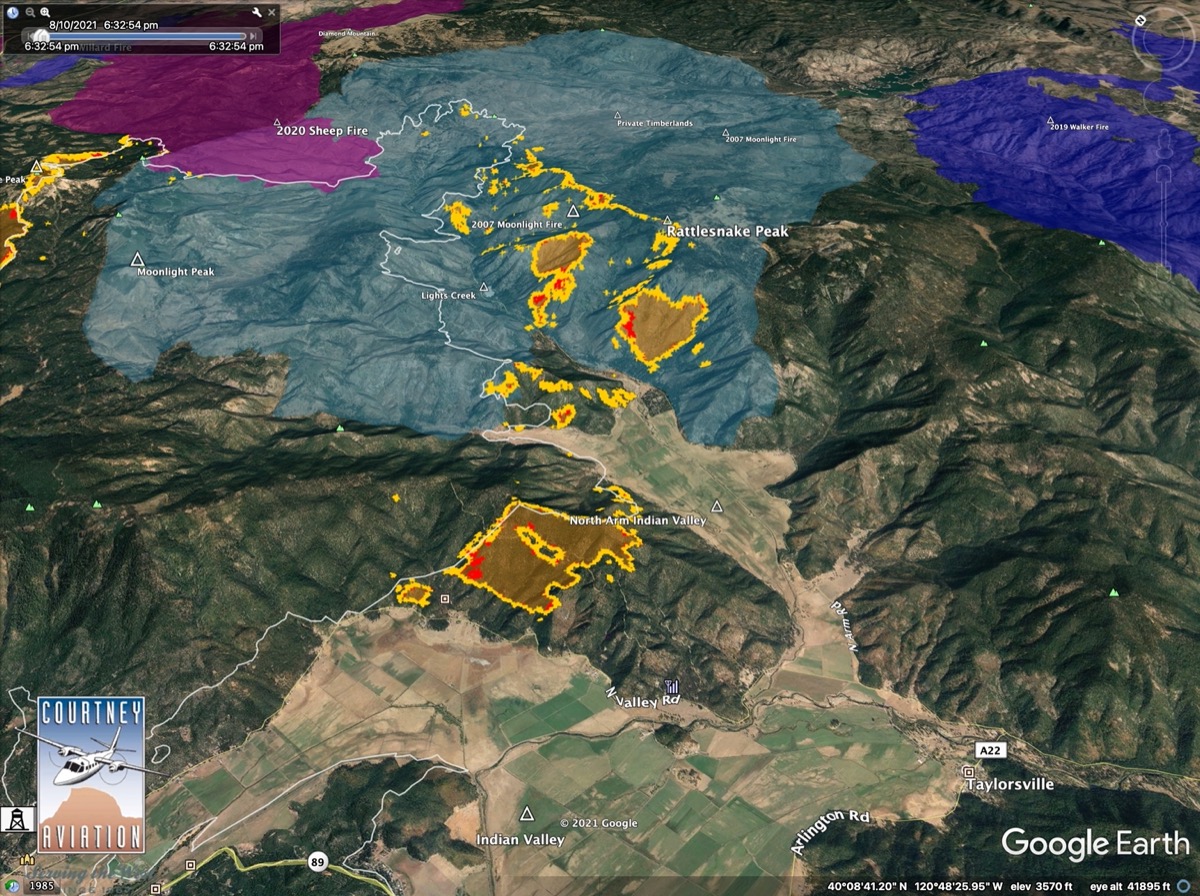 From a firefighting perspective, the biggest change in the past 24 hours has been the major growth on the easternmost flank of the fire. Yesterday around sunset, the fire crossed Diamond Mountain Road around the bottom of the Moonlight Pass Road and ran up the slope toward Rattlesnake Peak. The fire also ran up Lights Creek toward where fire had already spread to Lone Rock. This flank of the fire grew about 10,000 acres in past 18 hours. The fire hasn’t advanced much closer to Janesville than it was yesterday or the day before. But this spread complicates controlling the SE flank of the fire, as there aren’t many great places to fight the fire on the east side of the North Arm Indian Valley. As mentioned earlier, the relatively light fuel loading in private timberlands at the head of the fire may help slow spread of the fire. Also, now that the fire has made its major terrain-driven run out of Lights Creek, it will be getting less help from the terrain in its spread. 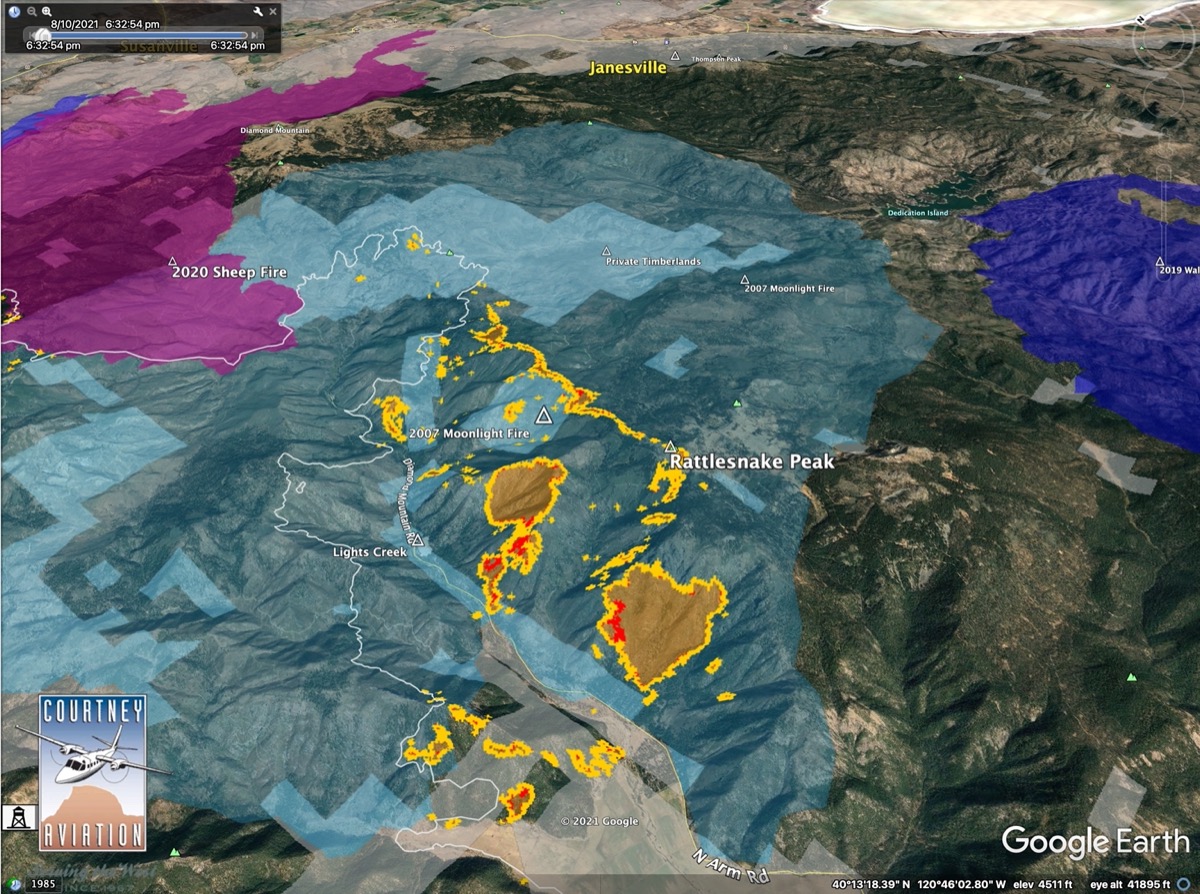 Beardsley Grade is the only real access to the area on the southeast part of the fire. It is not a great alignment for a fireline. If fire becomes established in the Peters Creek drainage, north of Beardsley Grade, it will have potential to make a similar run to what we saw in Freds Creek, a couple drainages to the north. 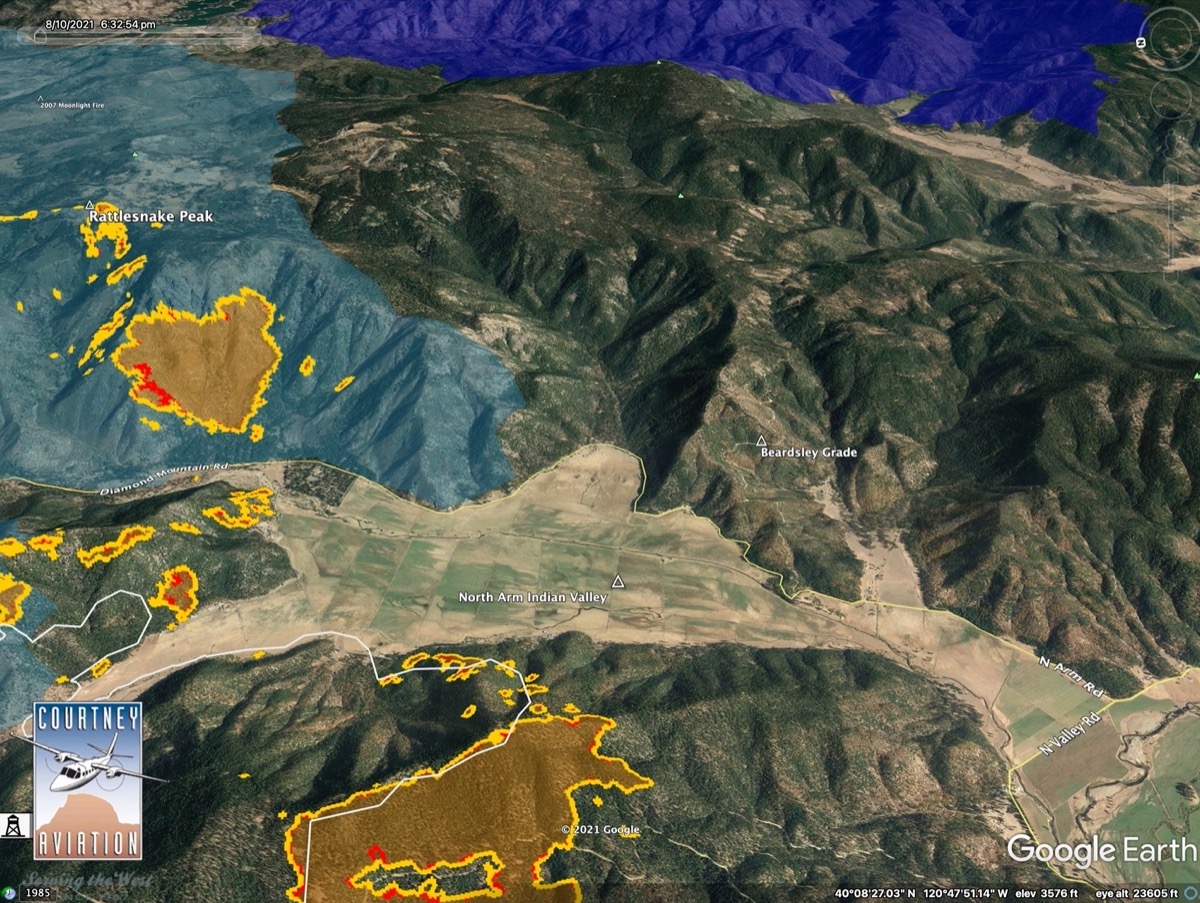 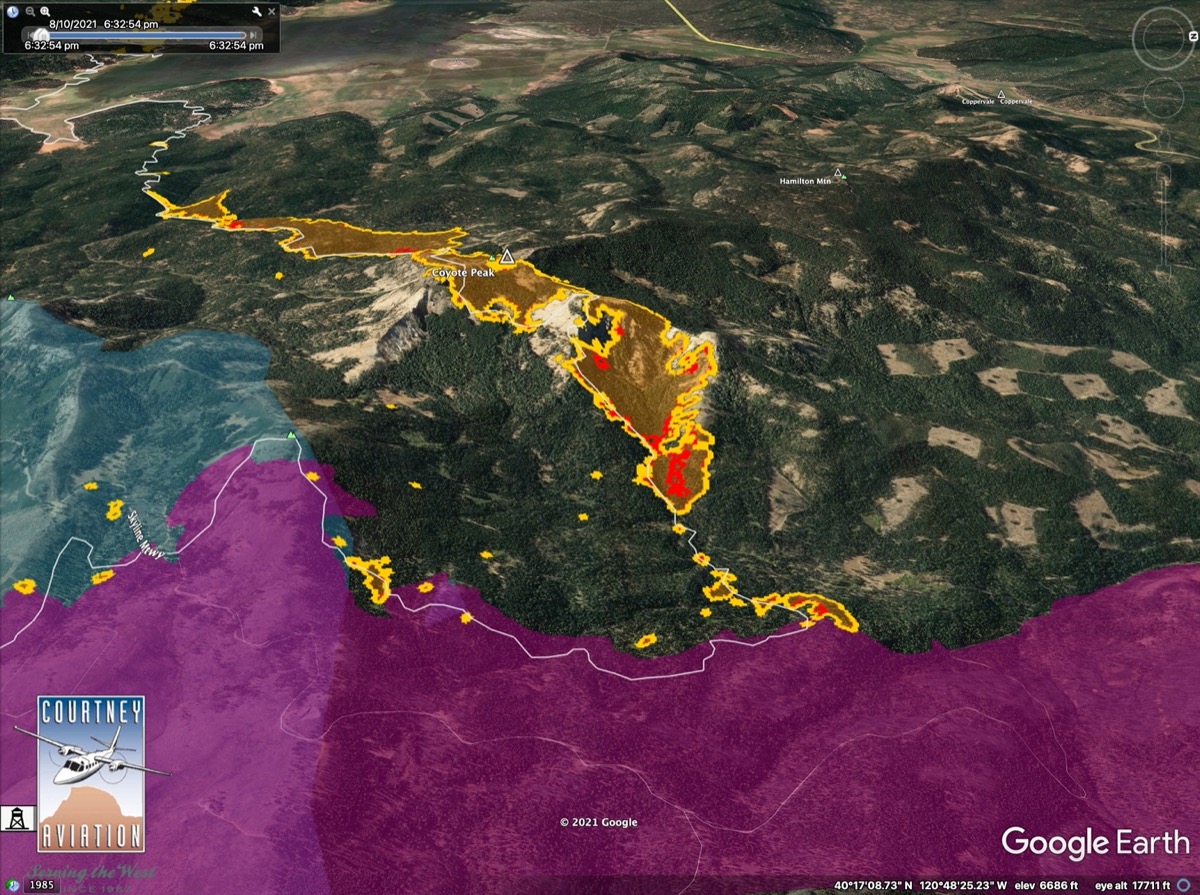 The fire on north side of Keddie Ridge didn’t move much today. 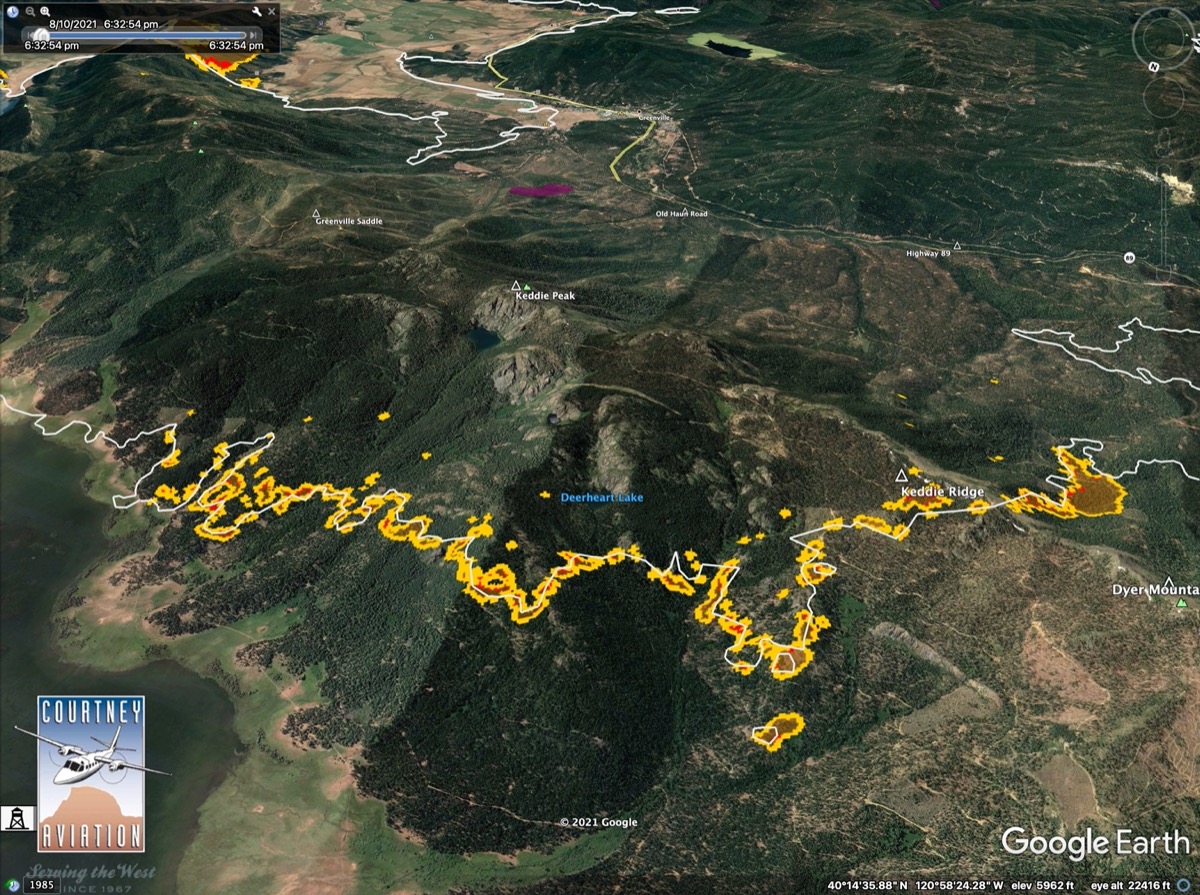 There was a slope-driven run on the south side of Keddie Ridge up toward Dyer Mountain. 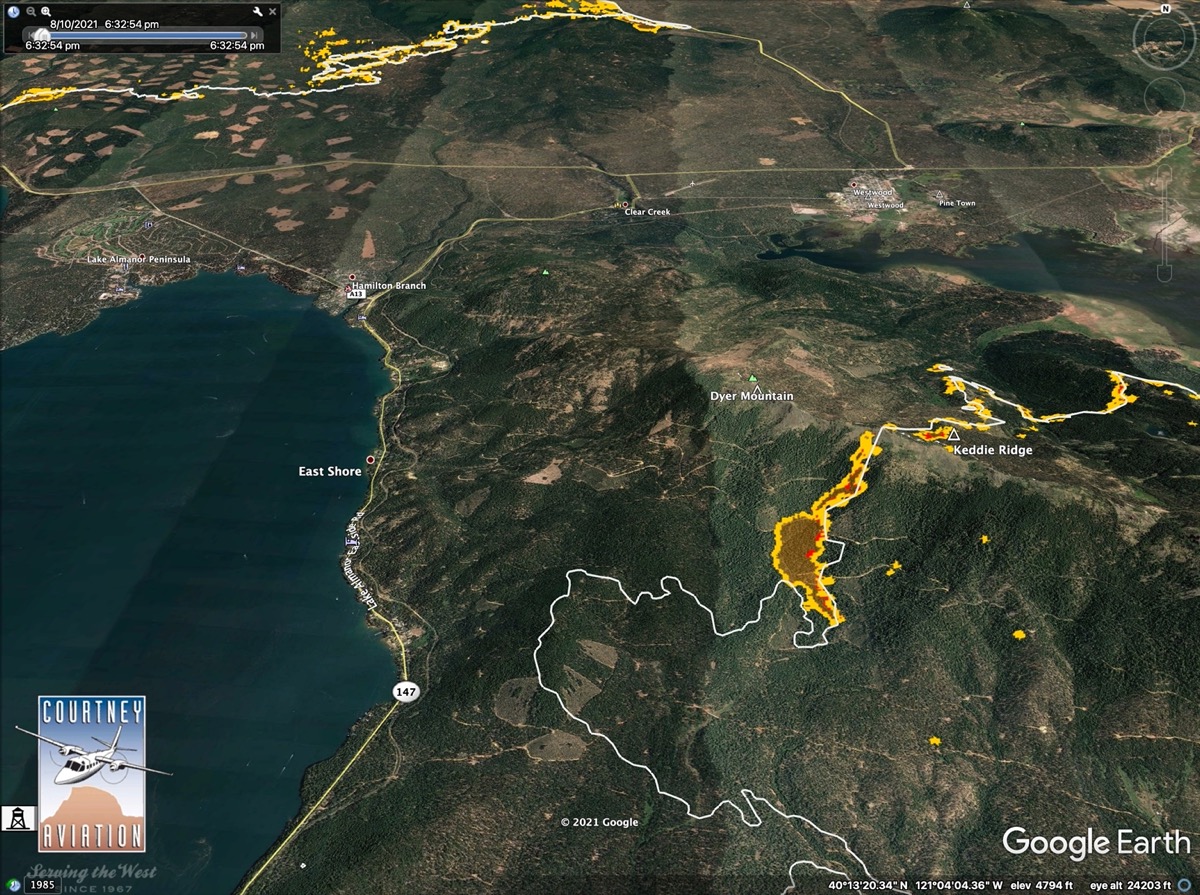 Looking north from Chester, there was a run up over the top of the Mud Creek Rim. Not much heat detected anywhere else near Chester, Lake Almanor West, or Prattville. 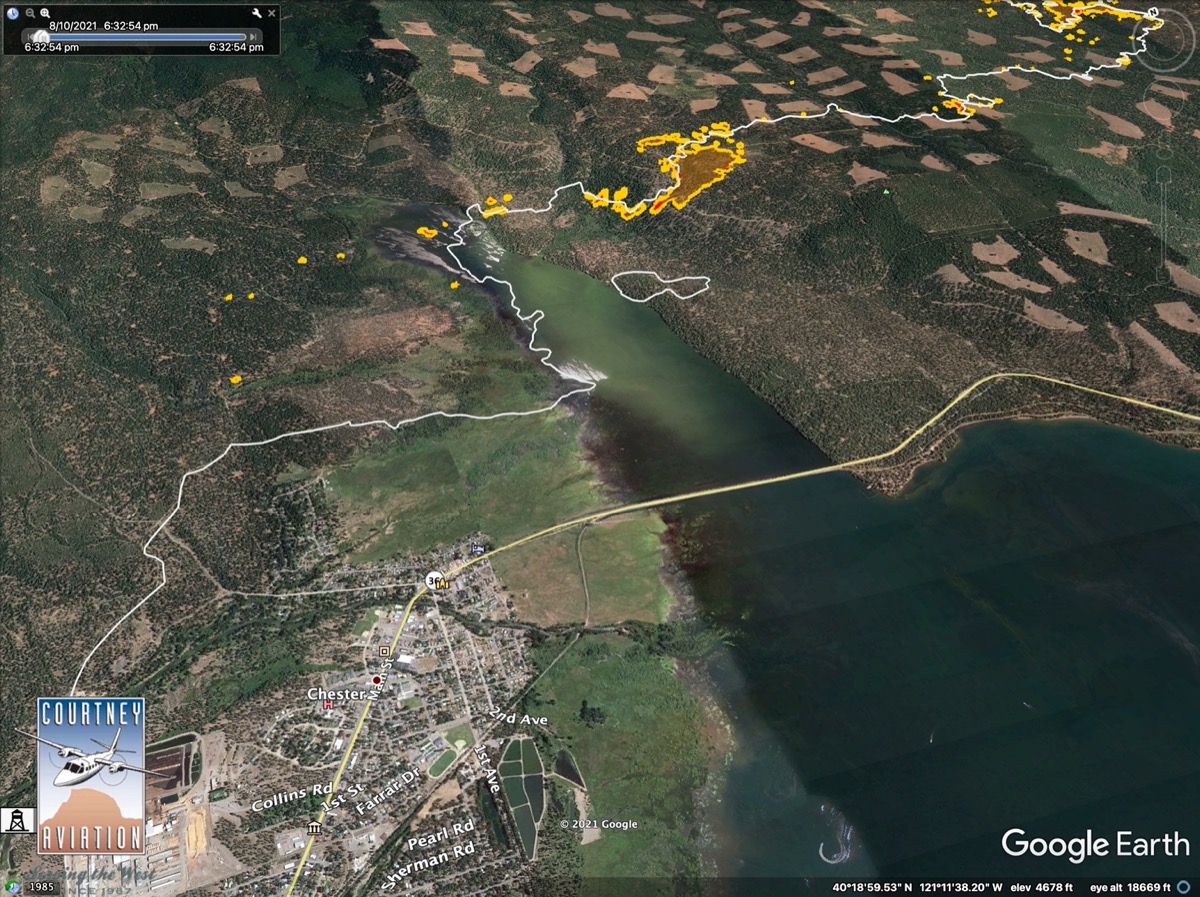 Heading NE from Chester, there was some spotting spread, but no major runs. The firing operation along A-21 had no major spots for the second day. 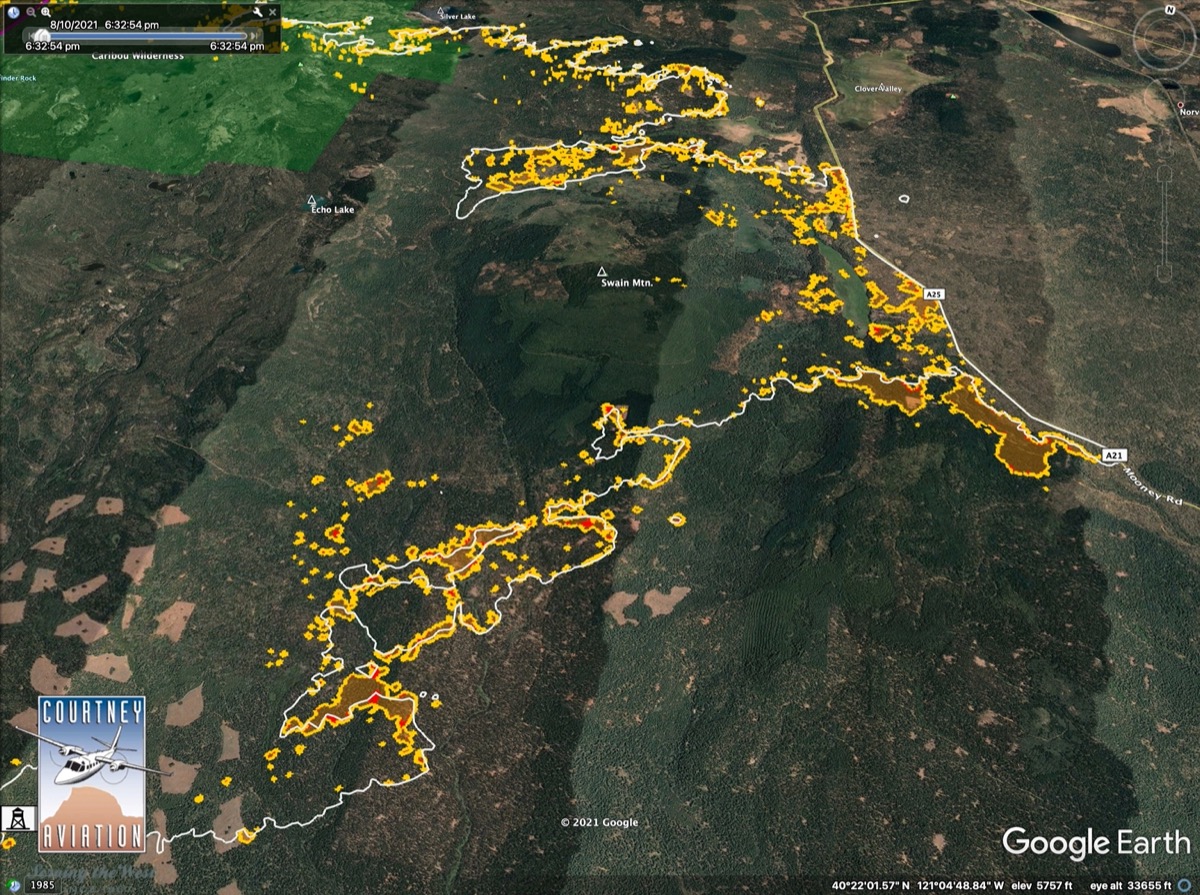 Looking southwest over Silver Lake. The fire continues to spread by spotting. No major runs. 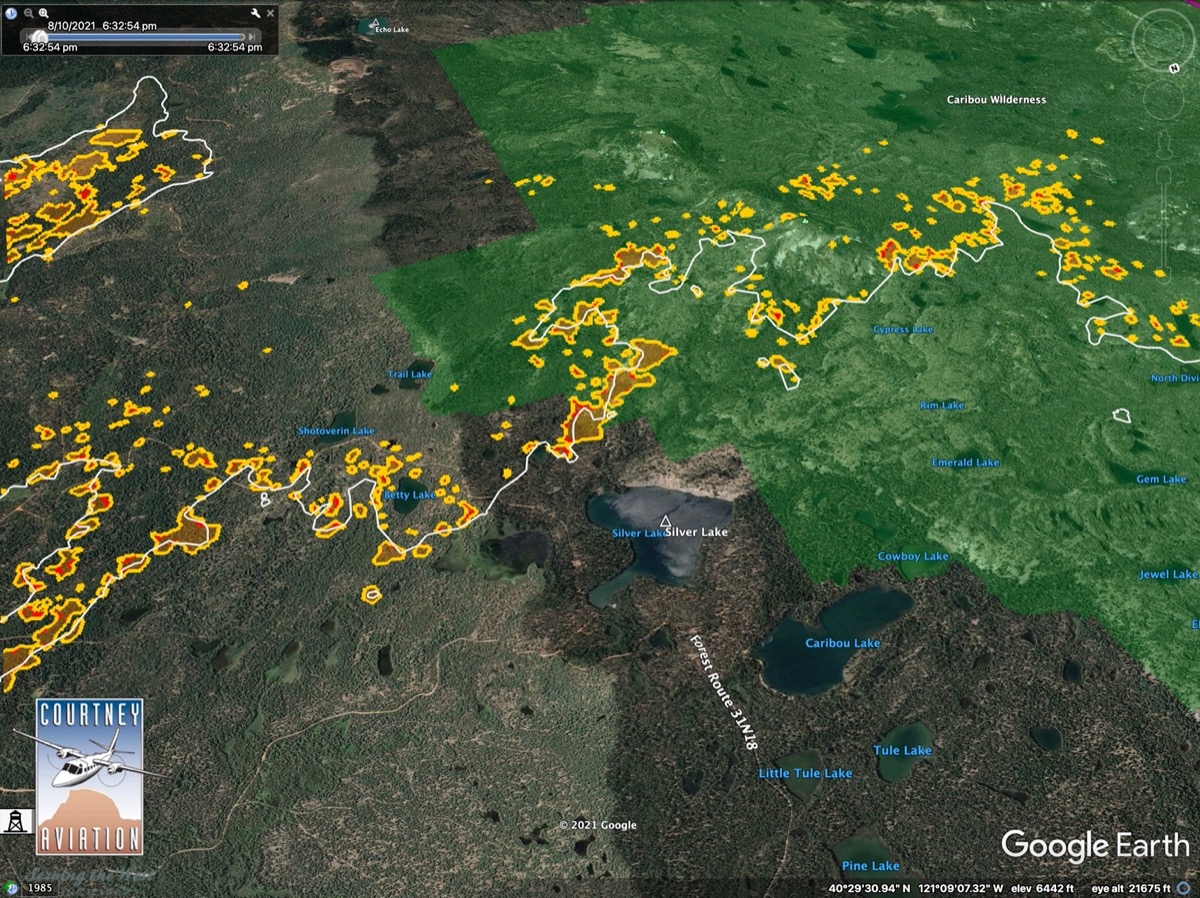 Coming around to the northernmost edge of the fire, there is some spread into the 1997 Huffer Fire, which was a lightning fire that got managed for resource-benefit until they decided to put it out and started calling it a wildfire. Some fire-geek trivia – the fire is mapped as 2 separate shapes, one for the ‘good fire’ and one for the ‘bad fire’. I don’t think the fire cared much either way, but you can see the slivers between the two different polygons. 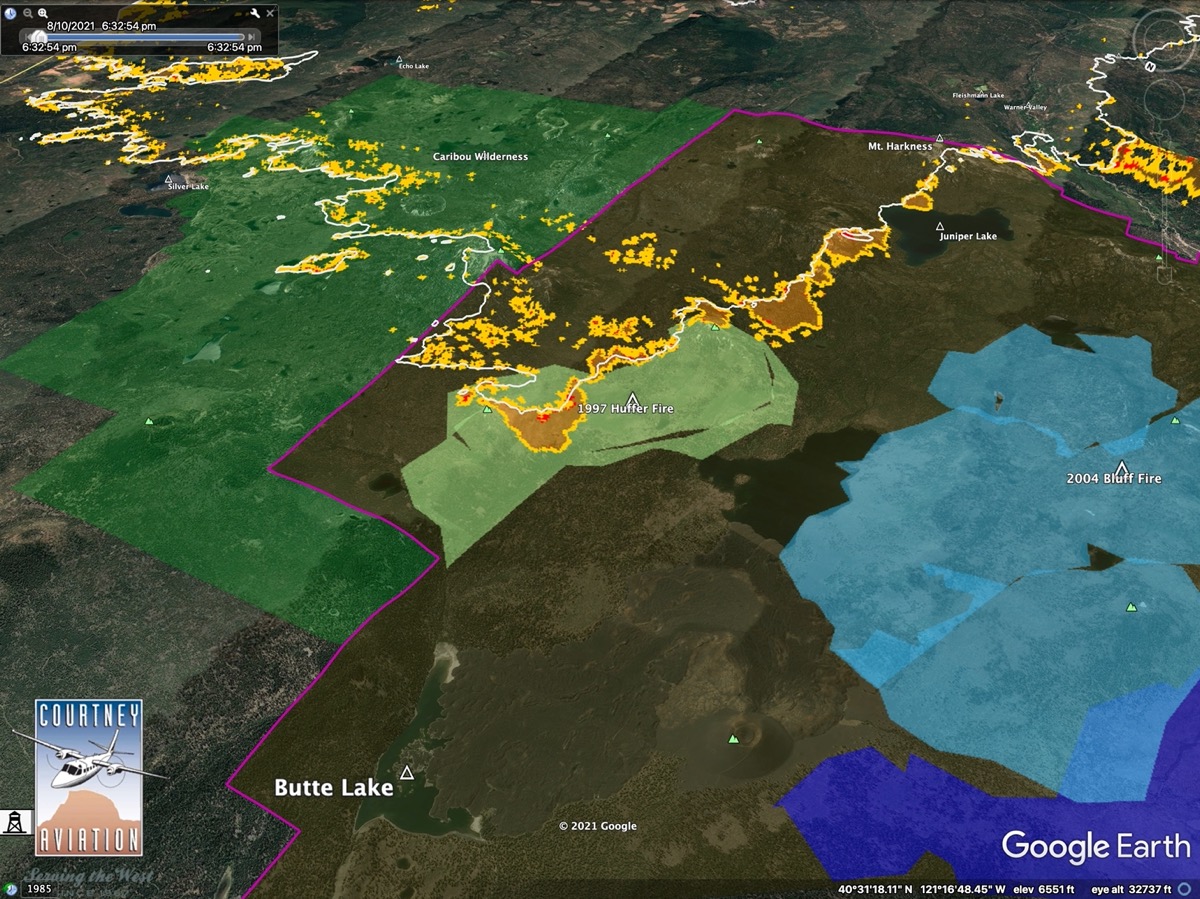 Heading down the NW flank, this view looks NW over Drakesbad. The fire made a push up Kelly Ridge, east of Willow Lake, and there was some spread up the floor of Warner Valley. 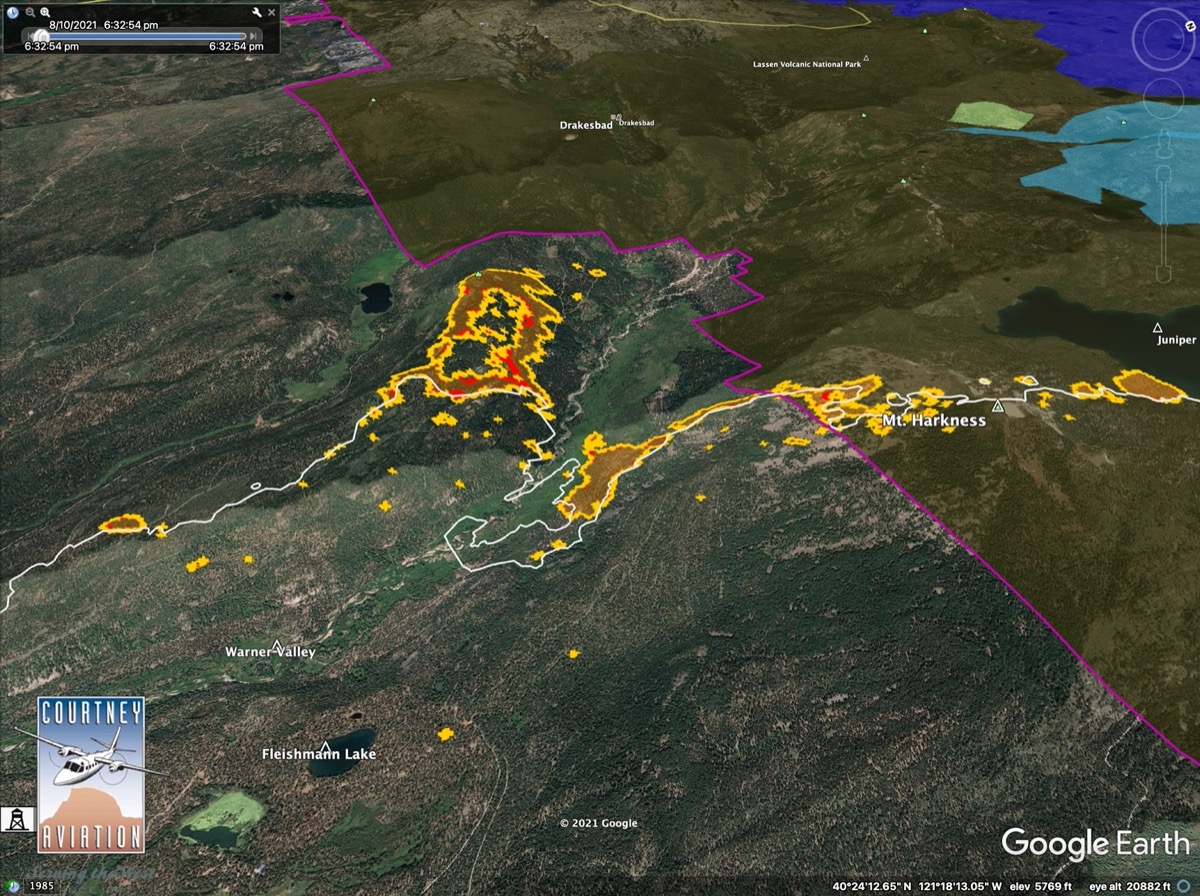 There is hardly any any heat showing on the west edge of the fire north of Black Forest Lodge. 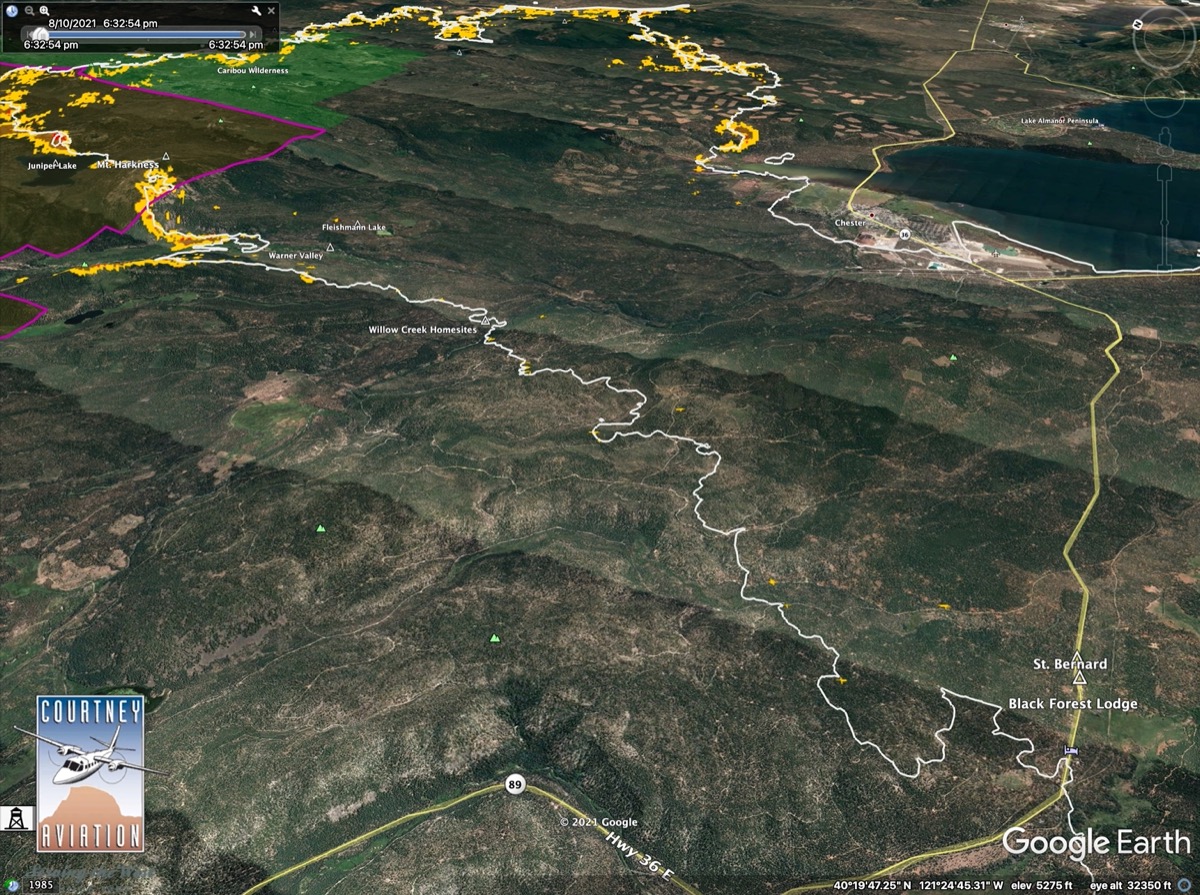 South of Highway 36, there is some spread on the fire on the western flank of Butt Mountain, with the fire still backing into Carter Creek. 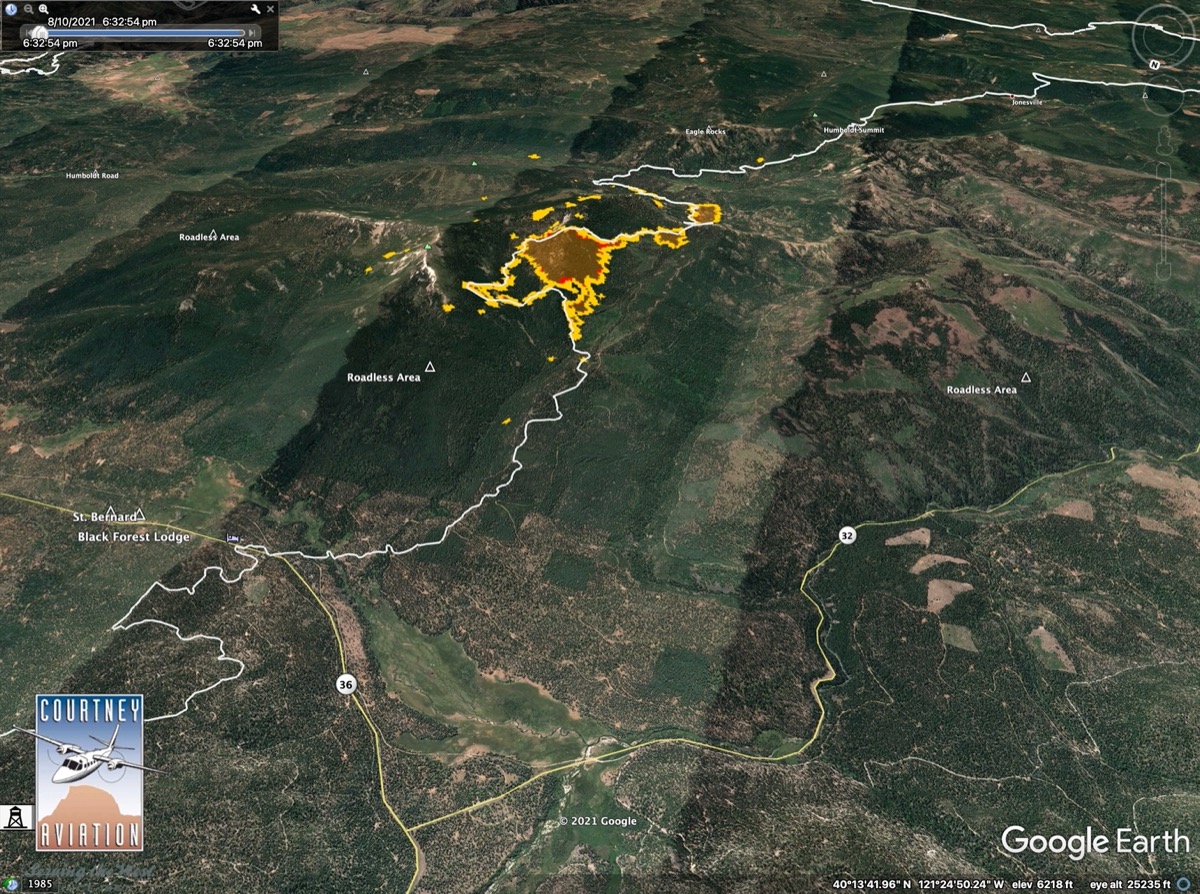 On the fire-science and ‘fighting fire smarter’ tip, I wanted to share a new, free website I have been using to look at fire hazard across the landscape. This imagery is from the California Forest Observatory website. This image shows canopy closure in the Moonlight Fire area. This is useful for identifying areas that have been thinned. The white areas in this image are fairly barren following the Moonlight Fire. Link to this image and other forest mapping layers, here. 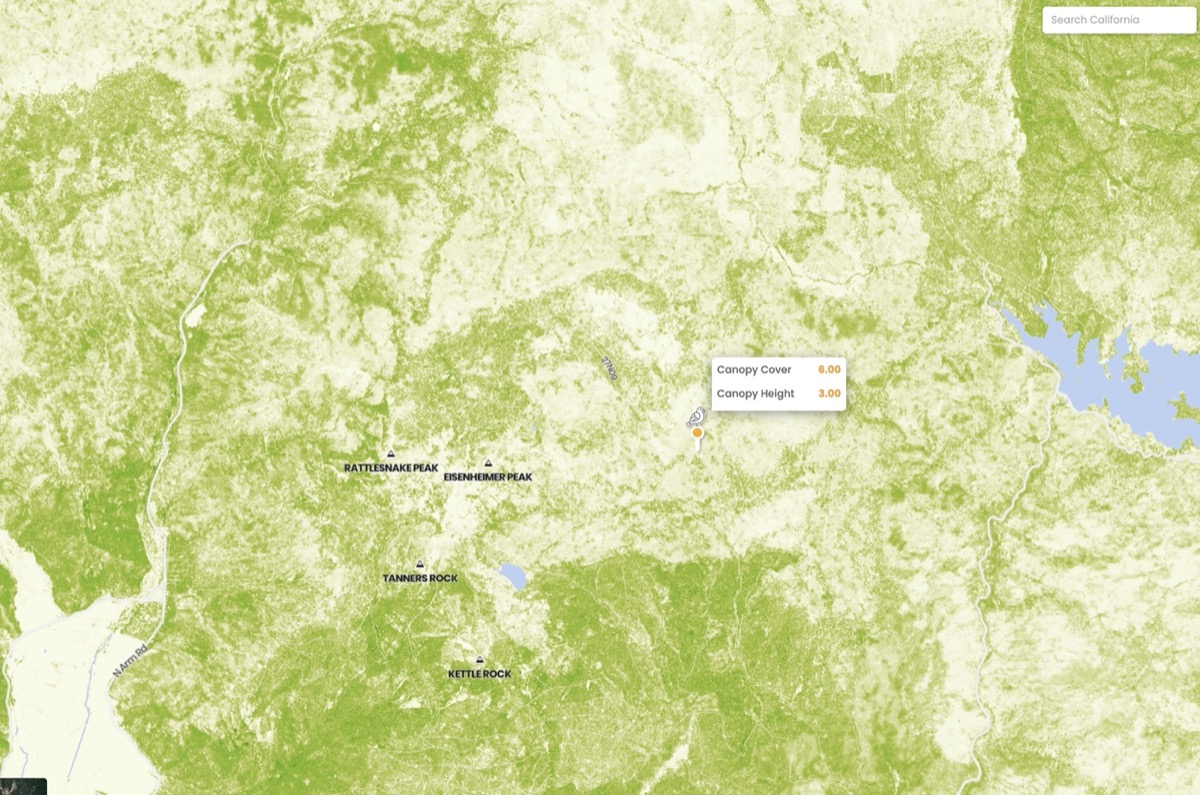 If these posts are helping you out, consider donating to The Lookout. We are still working out what the website will be, but donations will help me hire some help to creatE content and stories to help us more forward through this disaster.