I want to start this post off saying I am not very up-to-date with intel from the ground right now. I don’t usually listen to scanners or radio traffic unless I am in the field, and get most of my field-level intel from talking to friends who are in-the-know.  Right now I am mainly interpreting the public IR mapping products from the fire, so it’s hard for me to know what is a firing operation vs fire spread.

The most interesting thing on the intel this morning is a 2 mile spread of the fire to the south from near where the firing operations have been taking place on A-21. I can’t tell if this is planned as part of the firing operation, or if the fire made a run last night.  White lines outside the fire perimeter are completed dozer lines. Dozers do a ton of work, and this fire has plenty of them, so most often all of the dozer line doesn’t get on the map, so it is hard to tell where they have been working, or what the plan is to turn the corner around the southeast edge of the fire NW of Westwood. 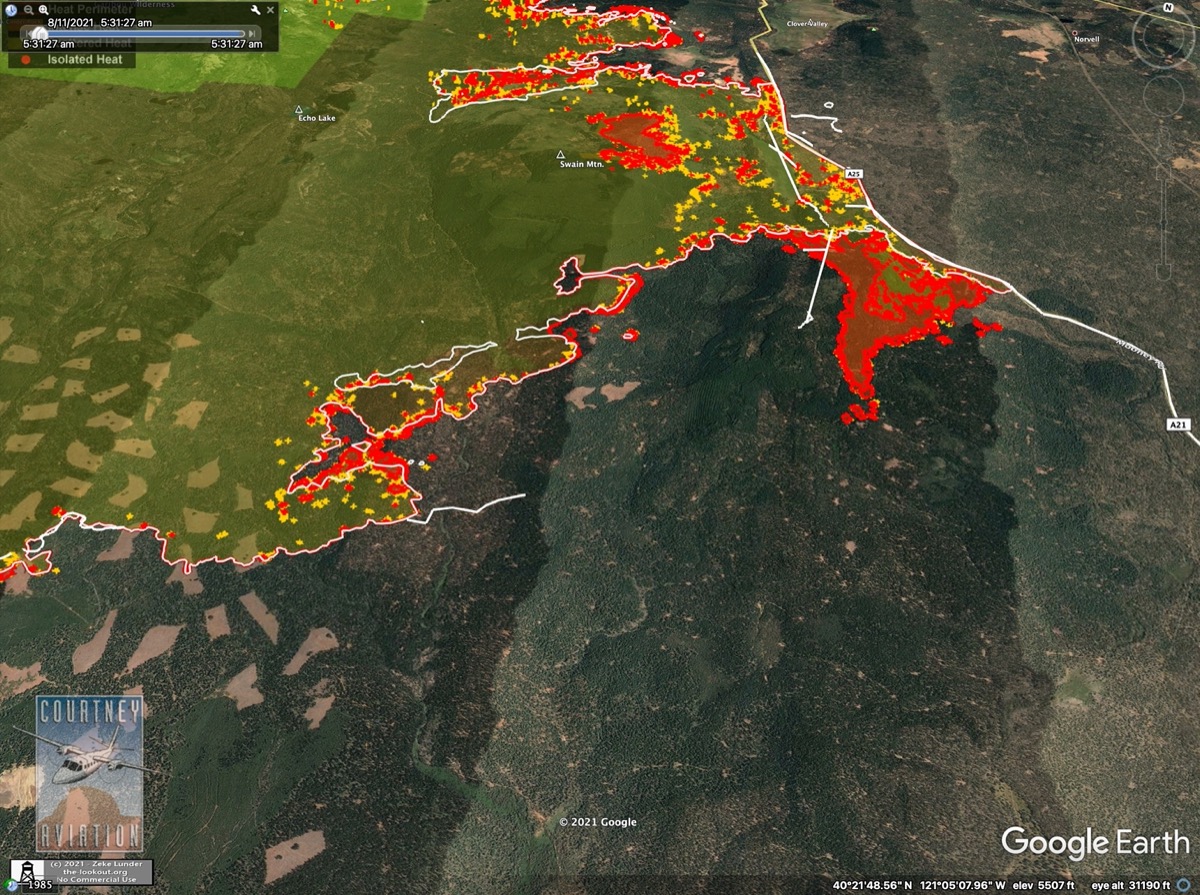 The tip of the fire spread is about 5 miles north of Westwood. 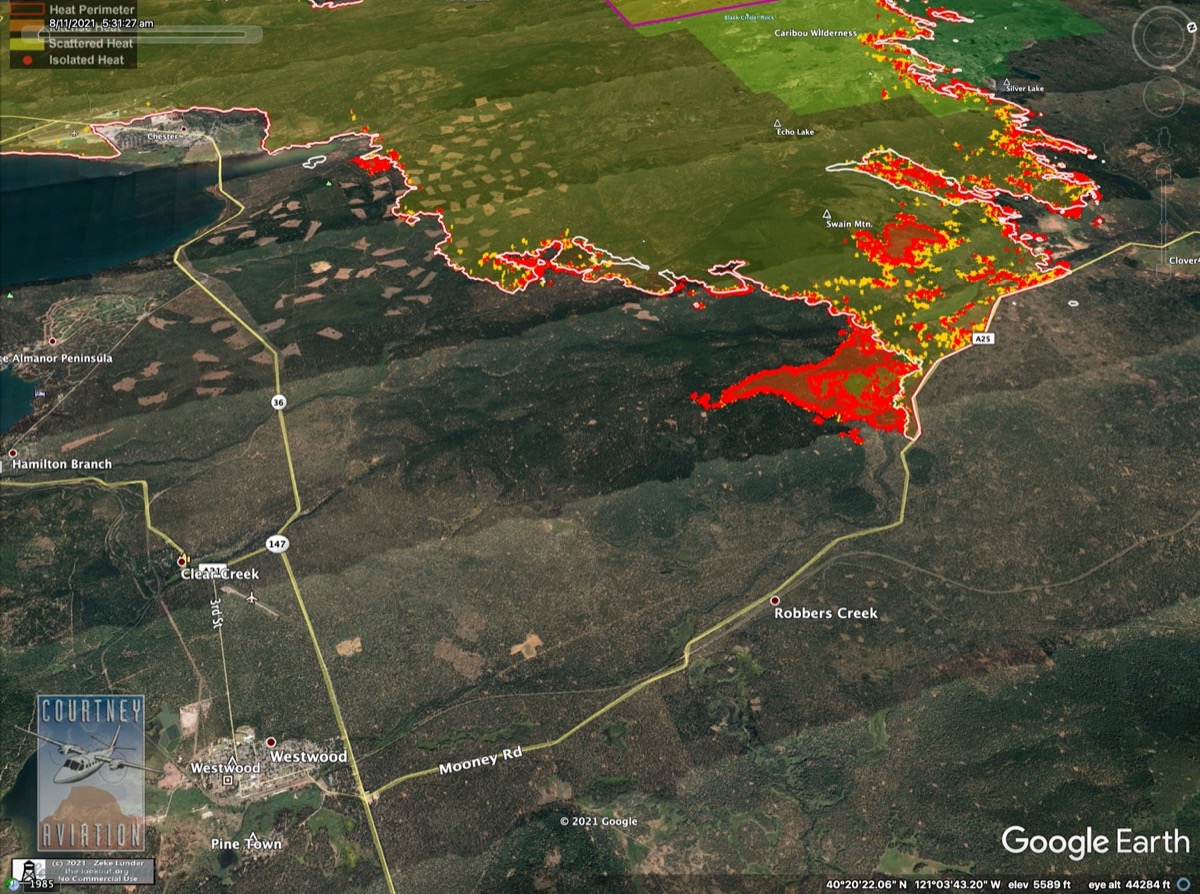 It looks like there some dozer line along the flank between A-21 and the Mud Creek Rim, north of Chester, has been lost due to spotting. Also, the run up and out of Mud Creek Rim I talked about previously was a place some direct dozer line was lost. White lines outside the fire perieter are mapped dozer lines. Other than to the north, there is no new heat on the IR around Chester or the West Shore of Almanor. 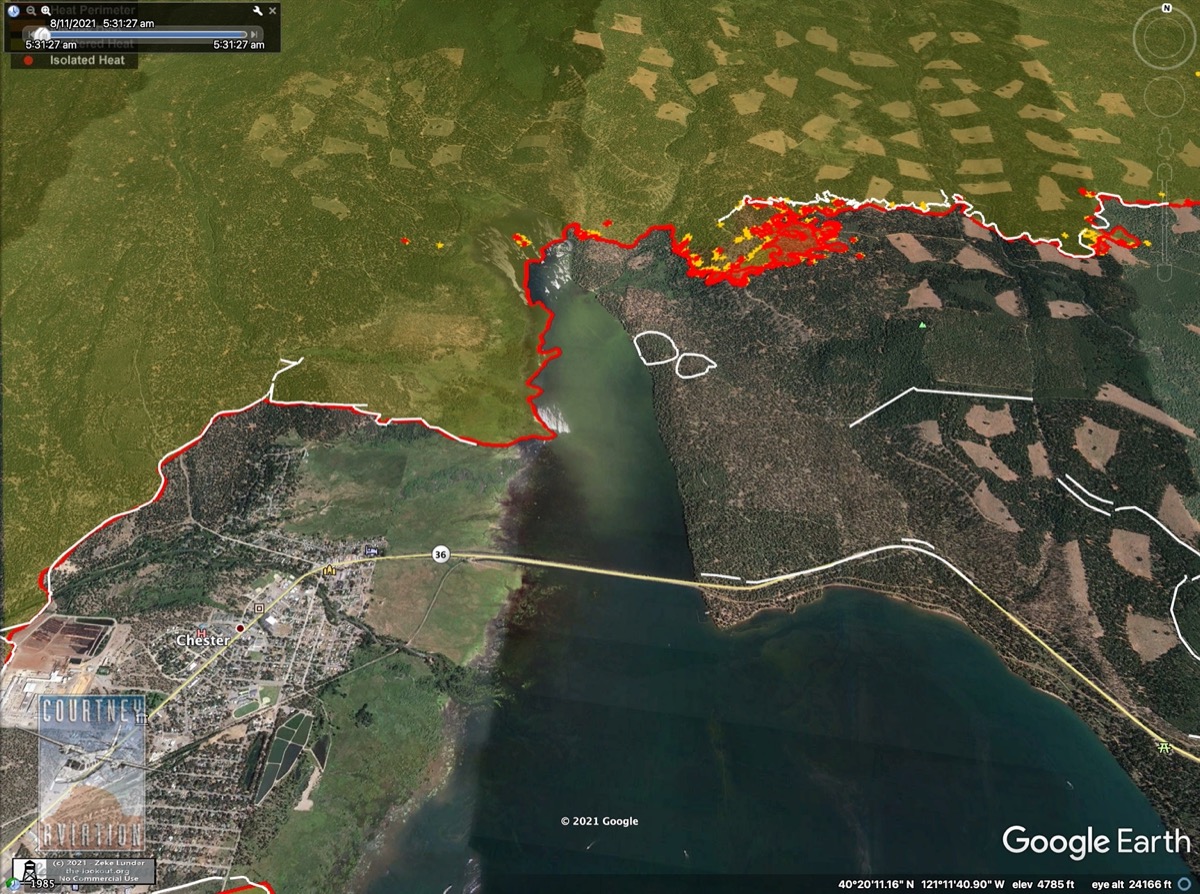 The other big action is on the eastern flank above North Arm Indian Valley. The fire continues to spread south on Keddie Ridge, but not much spread occurred overnight, according to IR. 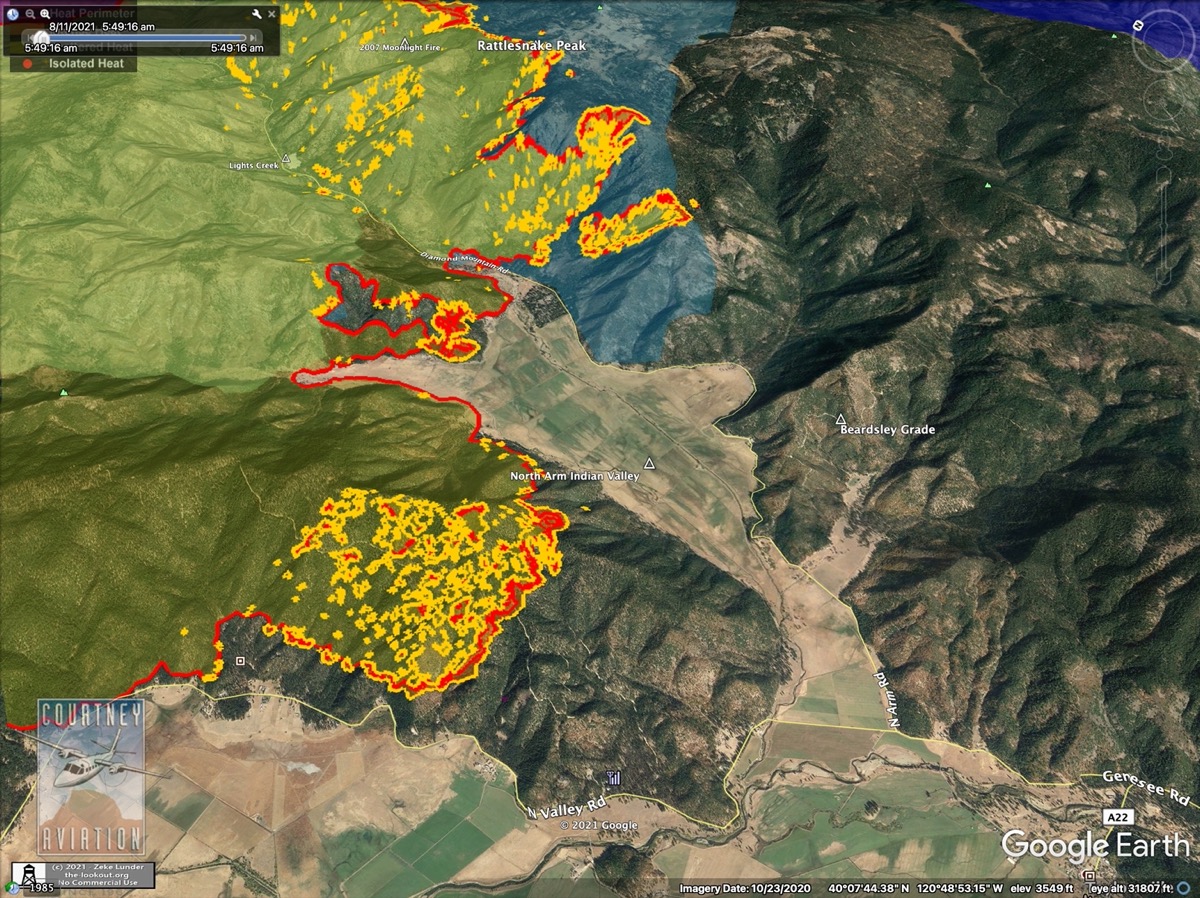 The fire is actively spreading up and out of Lights Creek, but without major slopes to push it, it isn’t making big runs. It has spotted into Peters Creek, and we can expect another big run up and out of there once the fire spots or gets established in the bottom of the drainage. Over the years we have learned the hard way about putting crews down in canyons out in front of active fires during extreme conditions. Unless there is clear air for heavy helicopters and air tankers to bombard this area, there is no reason to expect fire wont take out Peters Creek in near future and make a slope-driven run similar to the one we had 2 nights ago in Freds Creek. 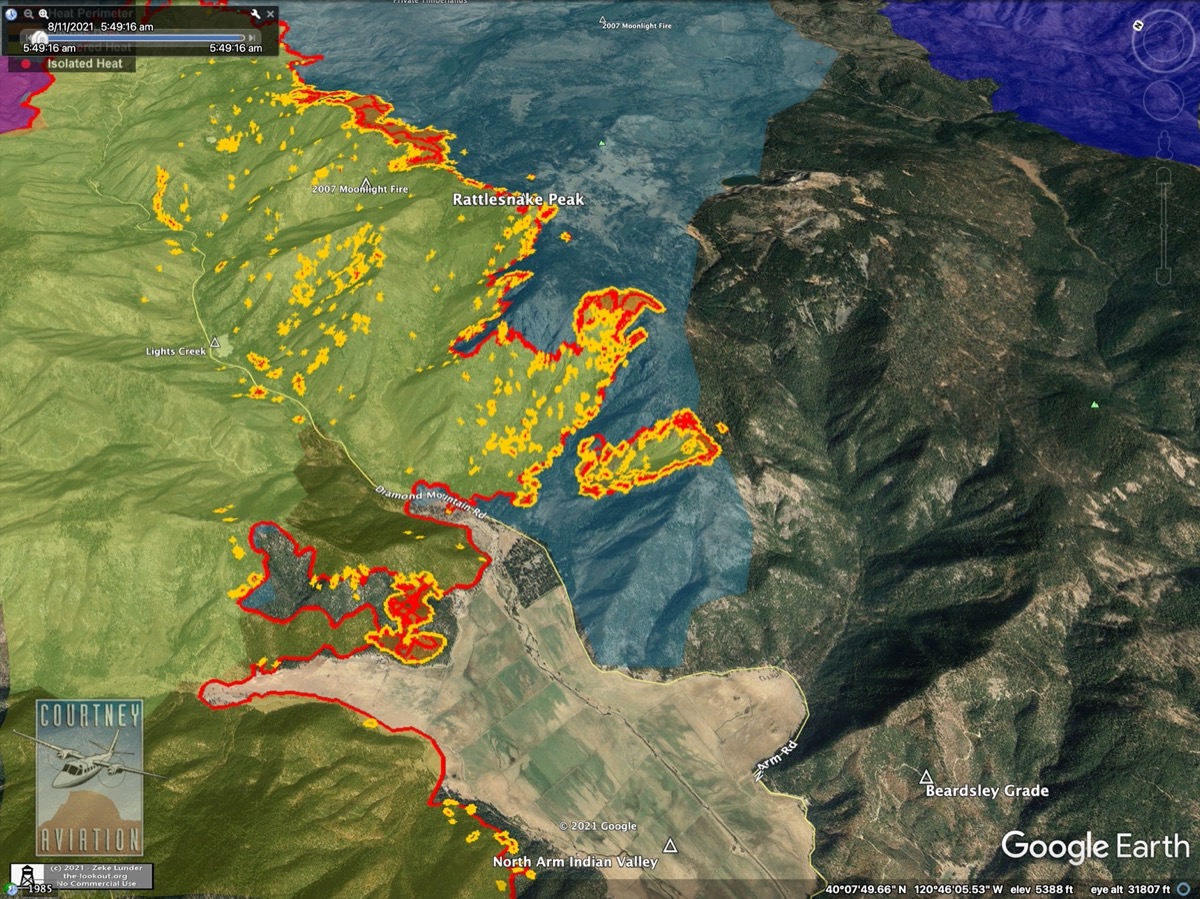 Moving toward NE, the head of the fire near Lone Rock didn’t move in past 24 hours. White line shows 24 hr spread, but is inaccurate except at the head of the fire, as IR plane couldn’t fly the area on lower-right of map due to extreme fire behavior night before last. Also, there is minimal movement along the flank where fire is bumping 2020 Sheep Fire. 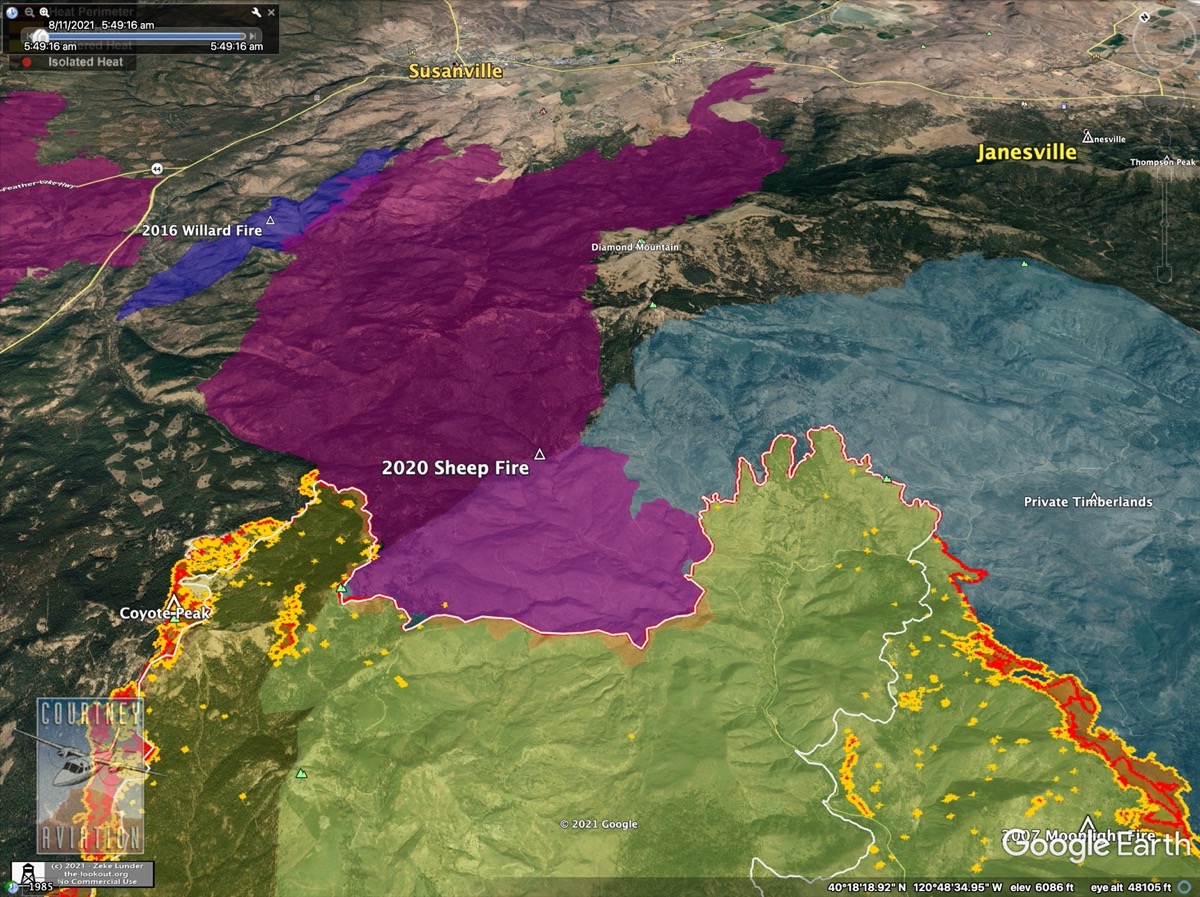 There is slow, steady flanking spread on the northern edge of the east zone, between Moonlight Peak and Hamilton Mountain.

The fire in Carter Creek, west of Butt Mountain continues to spread slowly west, but has not crossed the dozer lines (white) at the top of the ridge. The areas where it slops over lines lower on the slope look cold over past several mapping cycles. 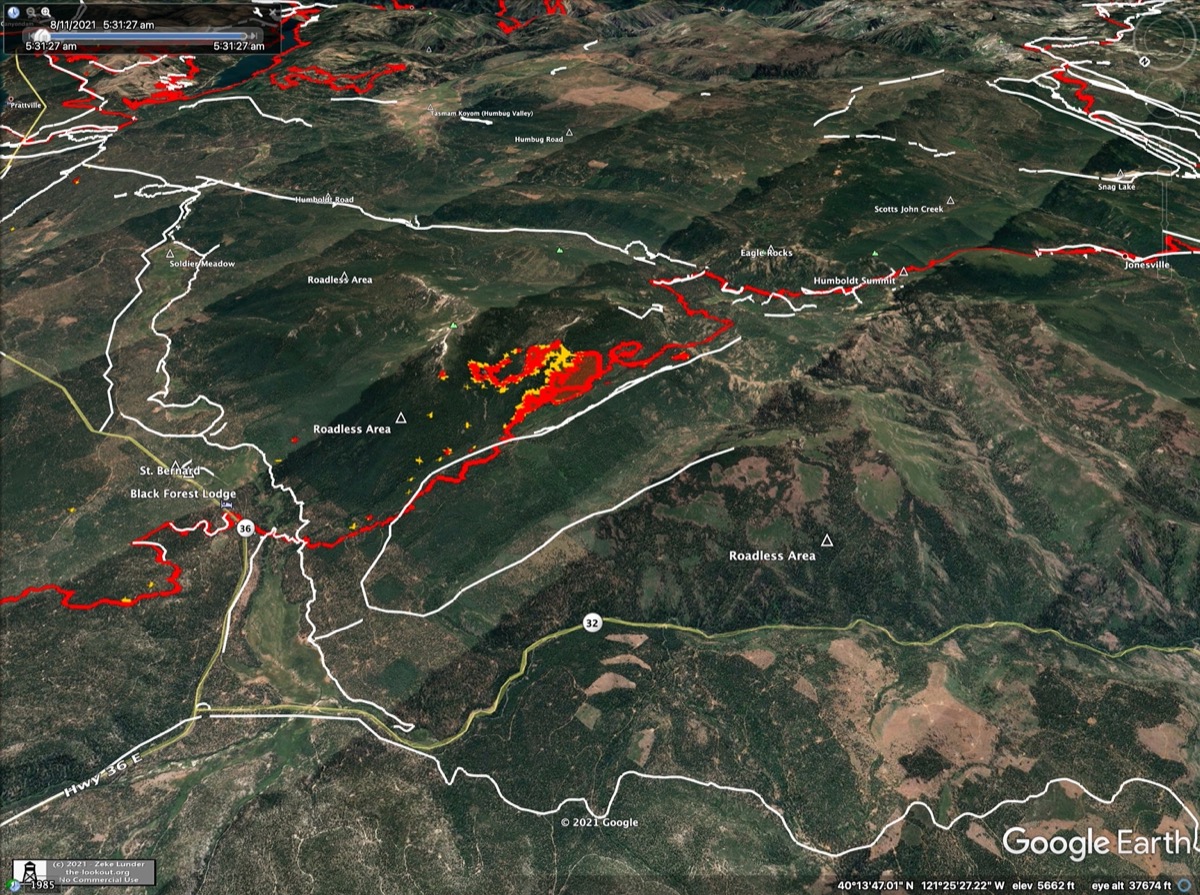 To wrap up the active areas, the fire has spread northwest over the top of Kelly Mountain and is backing down toward Willow Lake. What looks like a spot out in front within Lassen Park is actually Terminal Geyser. Also, Boiling Springs Lake shows up as a hot spot! Keep your dozers out of the hot springs, that’s steam, not smoke! There is a retired airtanker pilot who could never shake the nickname ‘Geyser Bill’ after he took independent action and dropped his load here on the way back from an aborted mission somewhere else. He saved the Geyser. 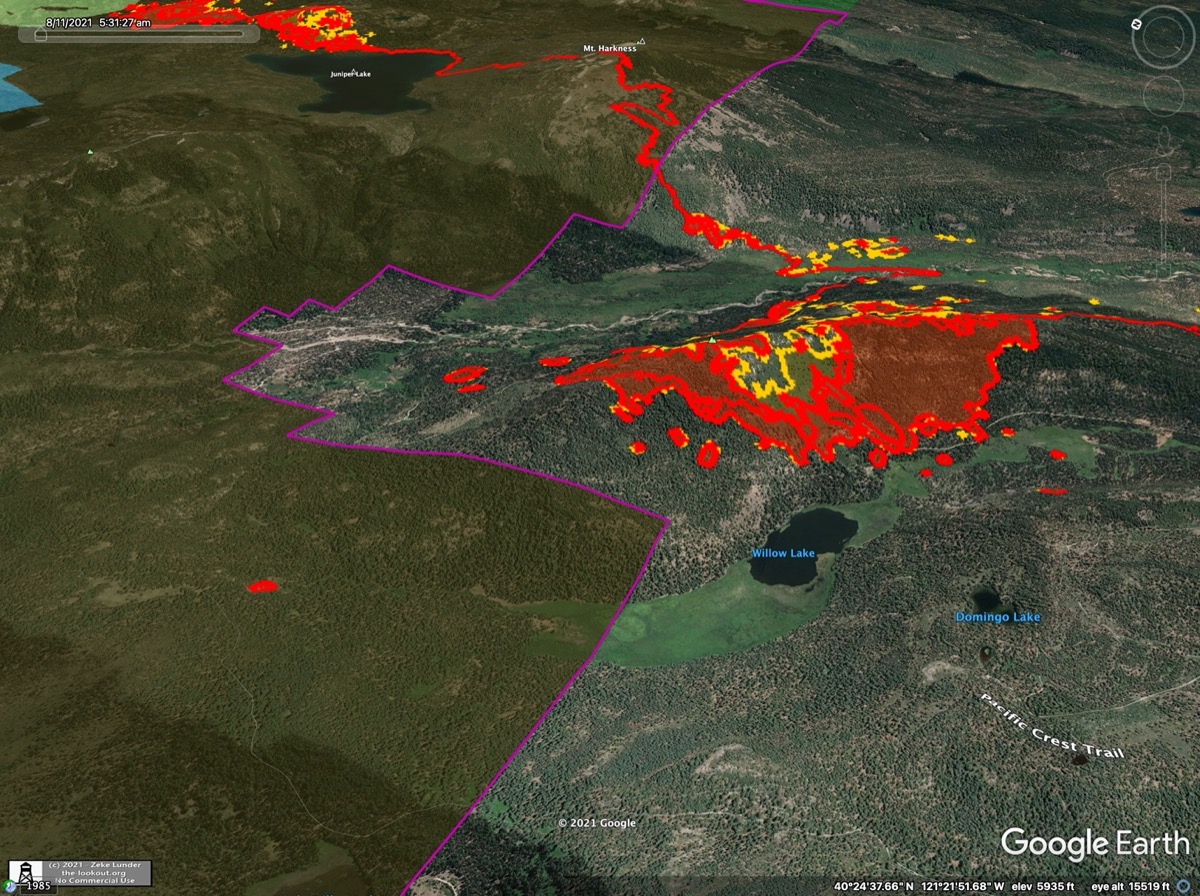 If these posts are helping you out, consider donating to The Lookout. We are still working out what the website will be, but donations will help me work less on other projects, giving me time to create content and stories to help us move forward through this disaster.