The fire was relatively subdued under heavy smoke today. The biggest run was about a mile, inside the 2007 Moonlight Burn, headed east toward Antelope Lake on the east flank of the fire, north of Eisenheimer Peak. Another run of about 2,000 feet, headed southwest, occurred on the northern flank of fire near the firing operations on County Road A-21. Also, the fire ran a bit farther west on Kelly Mountain, above Willow Lake, and spotted 3,000 feet west across Willow Creek Valley.
Elsewhere, the fire was mainly backing and flanking. The fire on the southern tip of Keddie Ridge spread about 600 feet in 16 hours.

I had a question about the colors I am using:
Light yellow is the interior of the fire, where some scattered heat exists.
Orange is more intense fire.
Darker yellow and red are mixed heat areas, with red being hotter.

The eastern edge of the fire did not spread closer to Janesville today. The IR imagery has shown no spread on the head near Lone Rock for the past 2 days. The 5,000′ run to the east is just above center in this image.
Blue fill and outline is Moonlight Fire. Light white overlay is private lands. 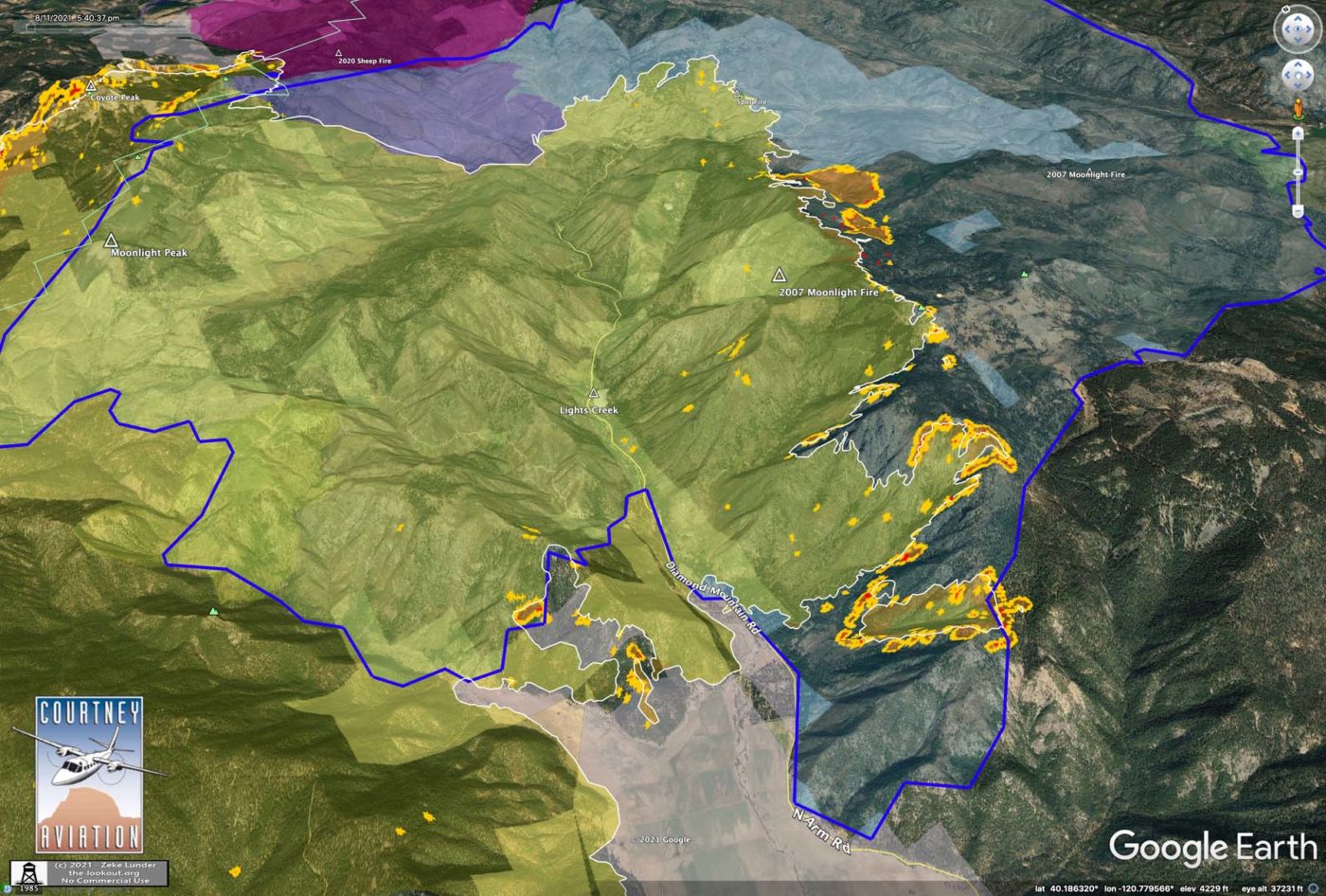 Fire spread about 600 feet to the south on the tip of Keddie Ridge (Taylorsville Dump Road). 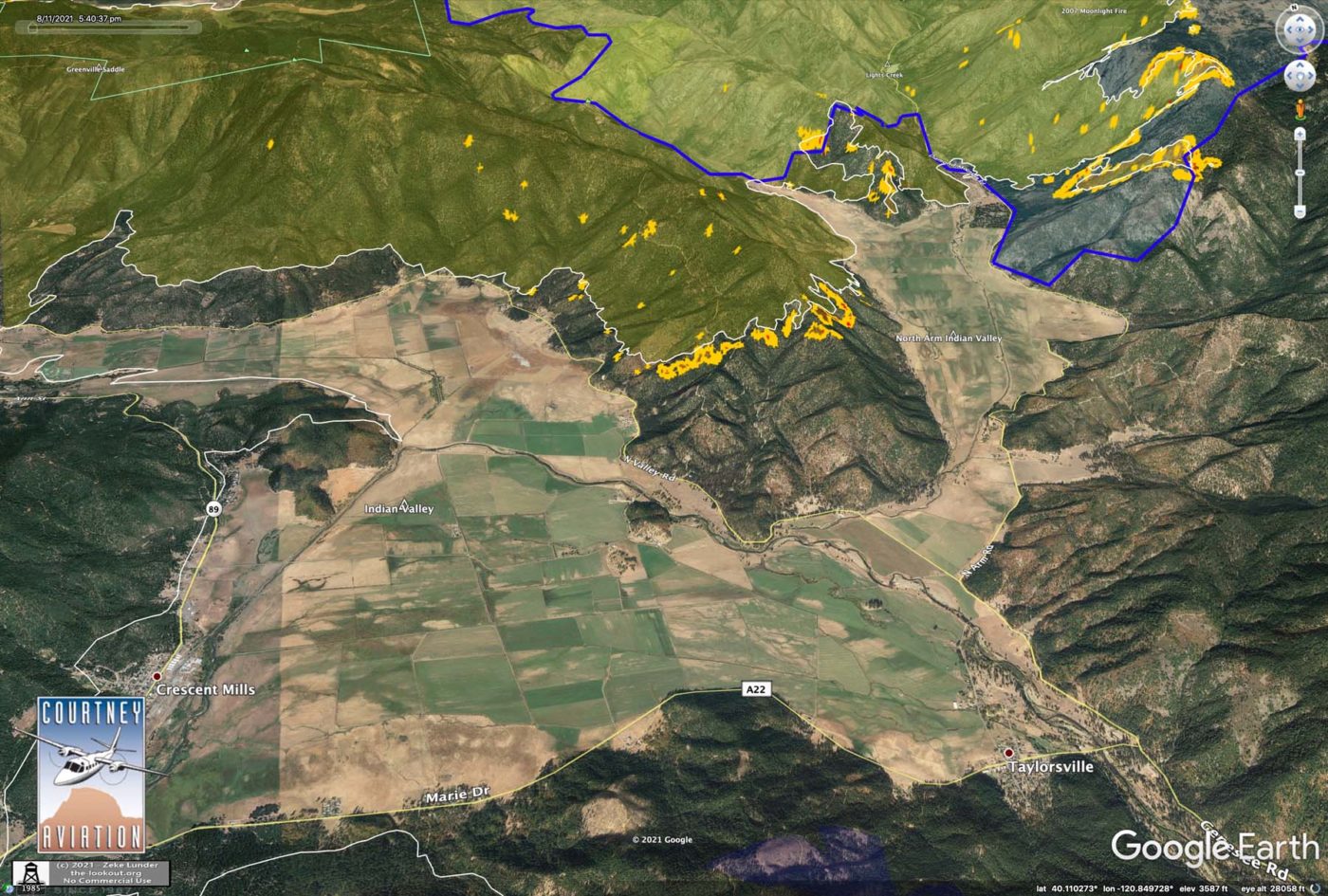 Looking south from over Fredonyer Pass, the area where the Dixie Fire is hitting the 2020 Sheep Fire continues to flank very slowly, advancing about 500 feet today. 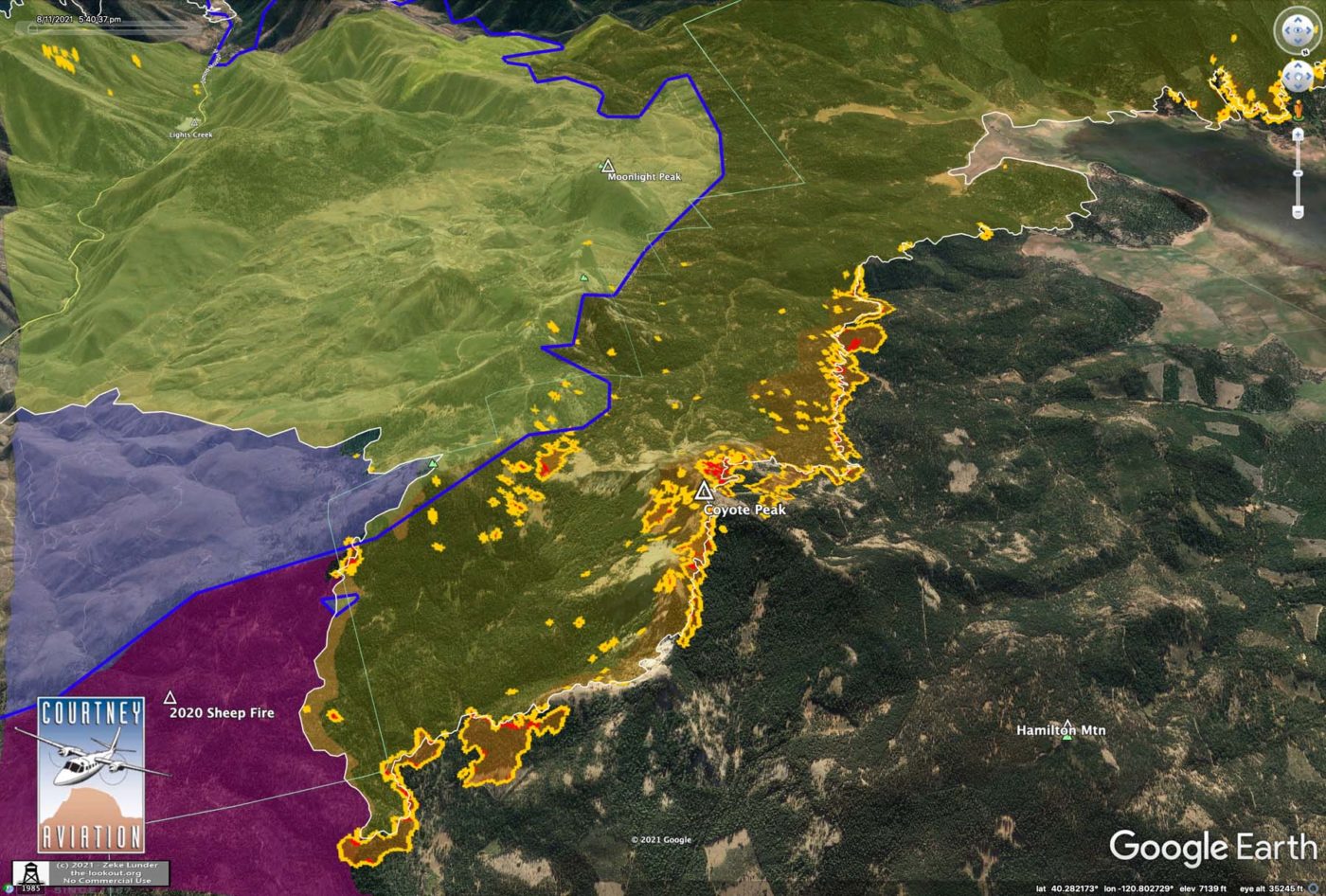 There is still some intense heat on the south side of Dyer Mountain, but the rest of the flank on the East Shore has been showing no concentrated heat. 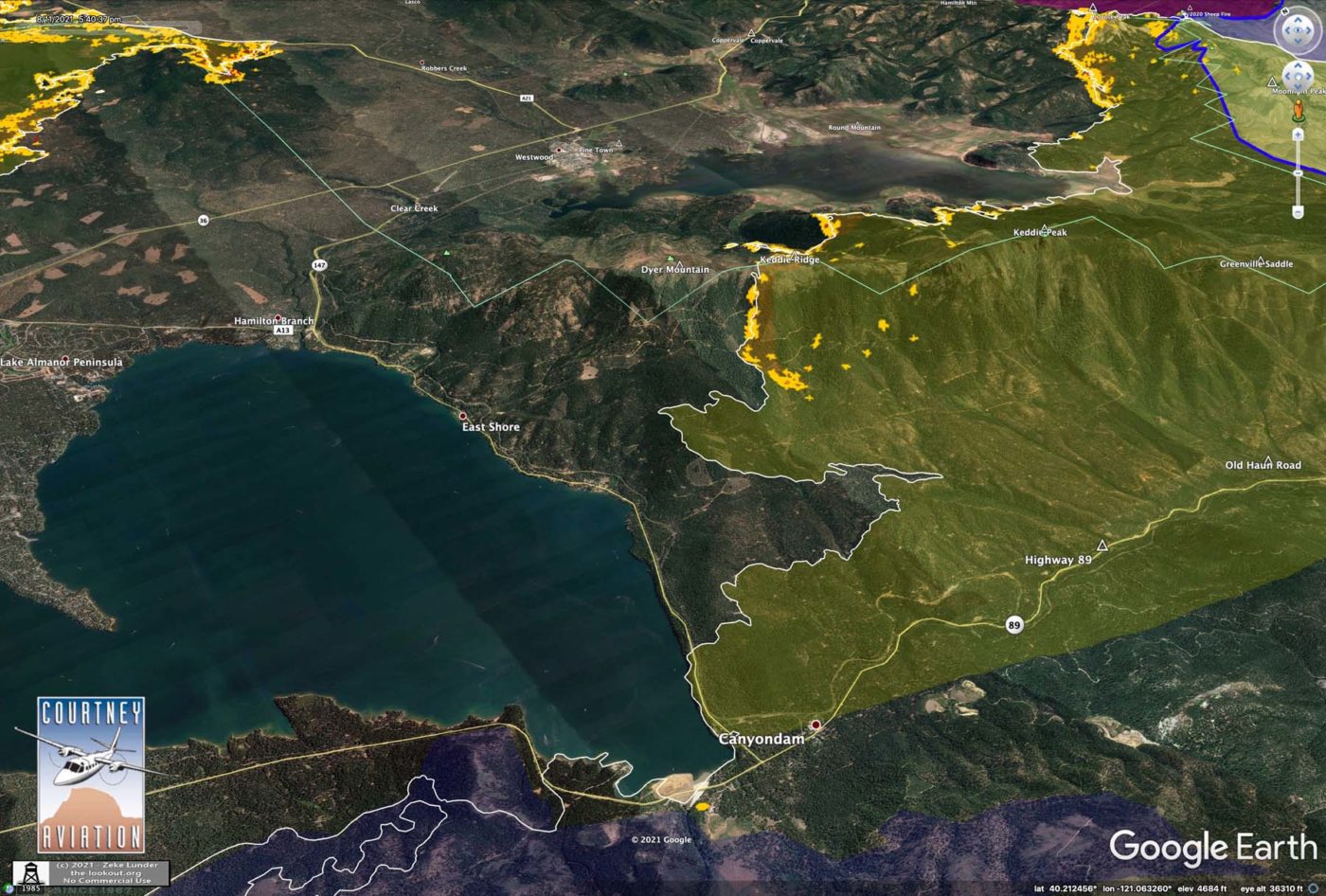 There is still some active spread on the area that took off on Mud Creek Rim 2 or 3 days ago. The white line shows 16 hours of spread. Much of the fire’s edge headed east from this point is not showing concentrated heat, but the areas which are hot have caused some problems, spotting over dozer lines yesterday. 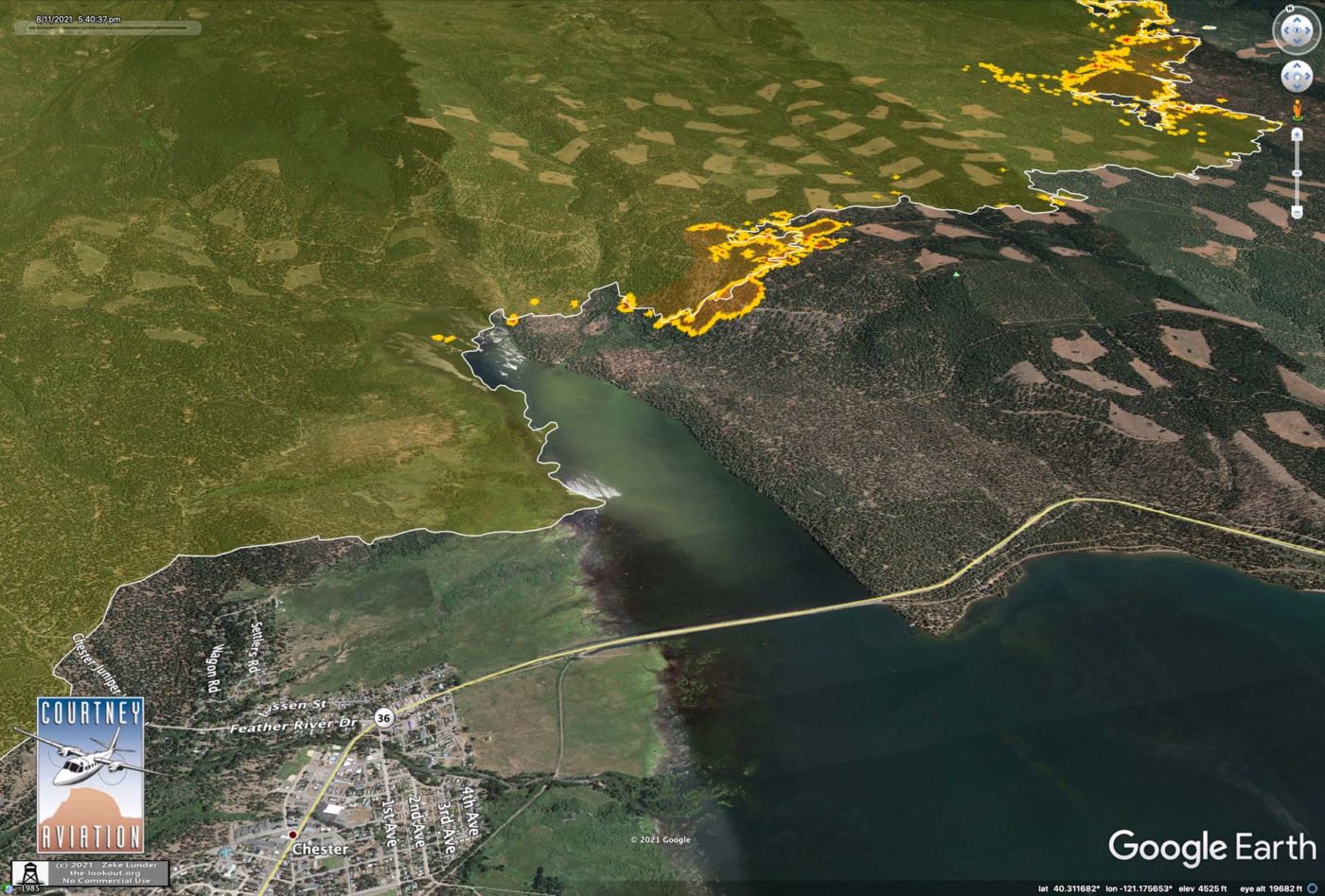 Farther east up the flank that is north of Highway 36, the Peninsula, Clear Creek, and Westwood, there is quite a bit of heat and fire spread where the firing operation has been ongoing on County Road A-21. The fire here ran about 2,000′ southwest in past 16 hours. Unclear exactly what is going on here and if this is part of the firing operations. Will update if I get better intel. 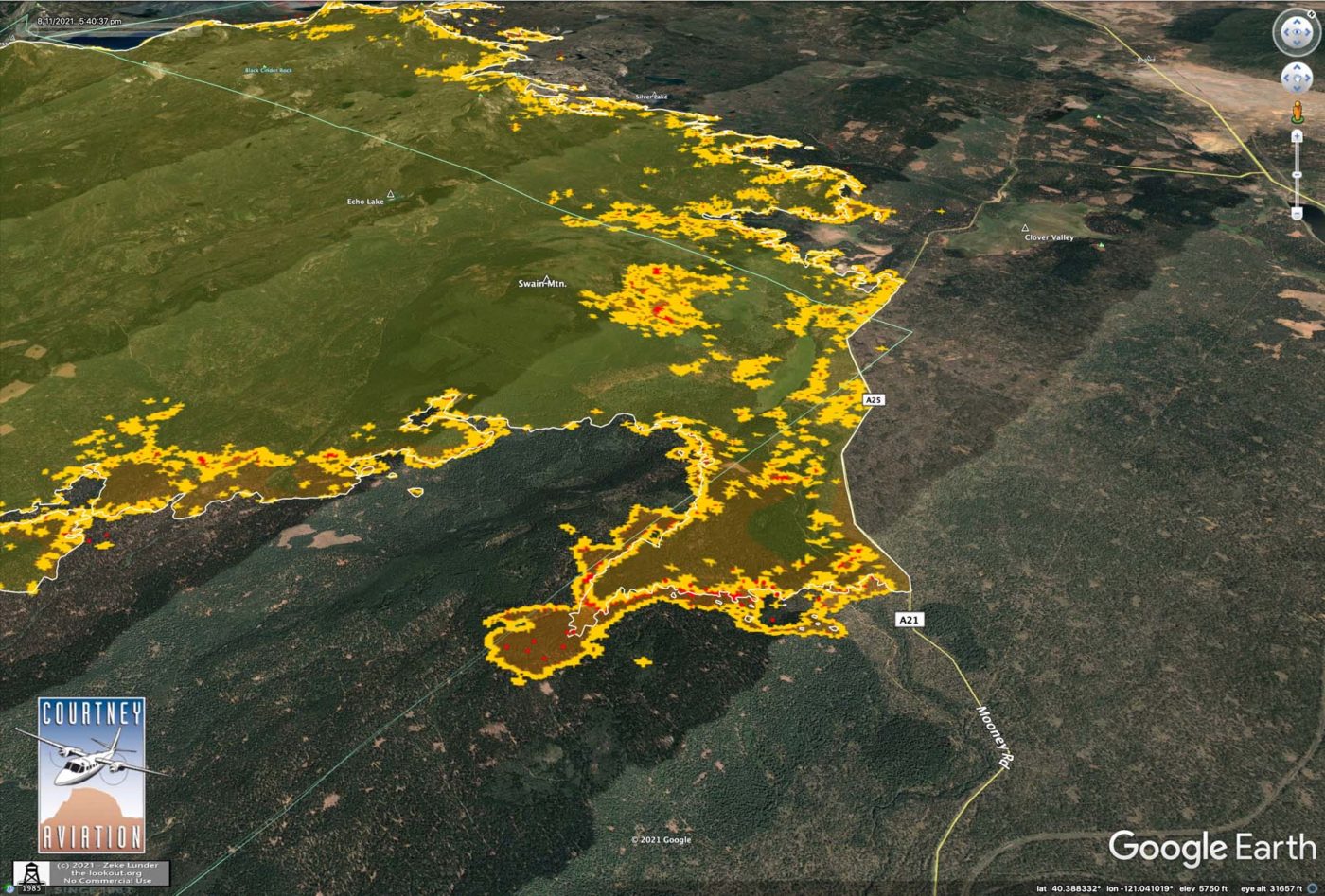 Swinging around to the NE edge of the fire, there has been a lot of interest in what is happening at Silver Lake. I got a donation and shout-out from a cabin owner up there and it turns out I had put the roof on it with my dad and his co-workers back in 1987! Slow spread in the rock continues. The fir needles here don’t support very large flame lengths, so most of the fire spread is by torching clumps of trees and spot fires.Similar sprad is going on in Lassen Volcanic National Park, where the largest sprad was 2,000 feet. 10,000 acres of Lassen Park has burned so far. 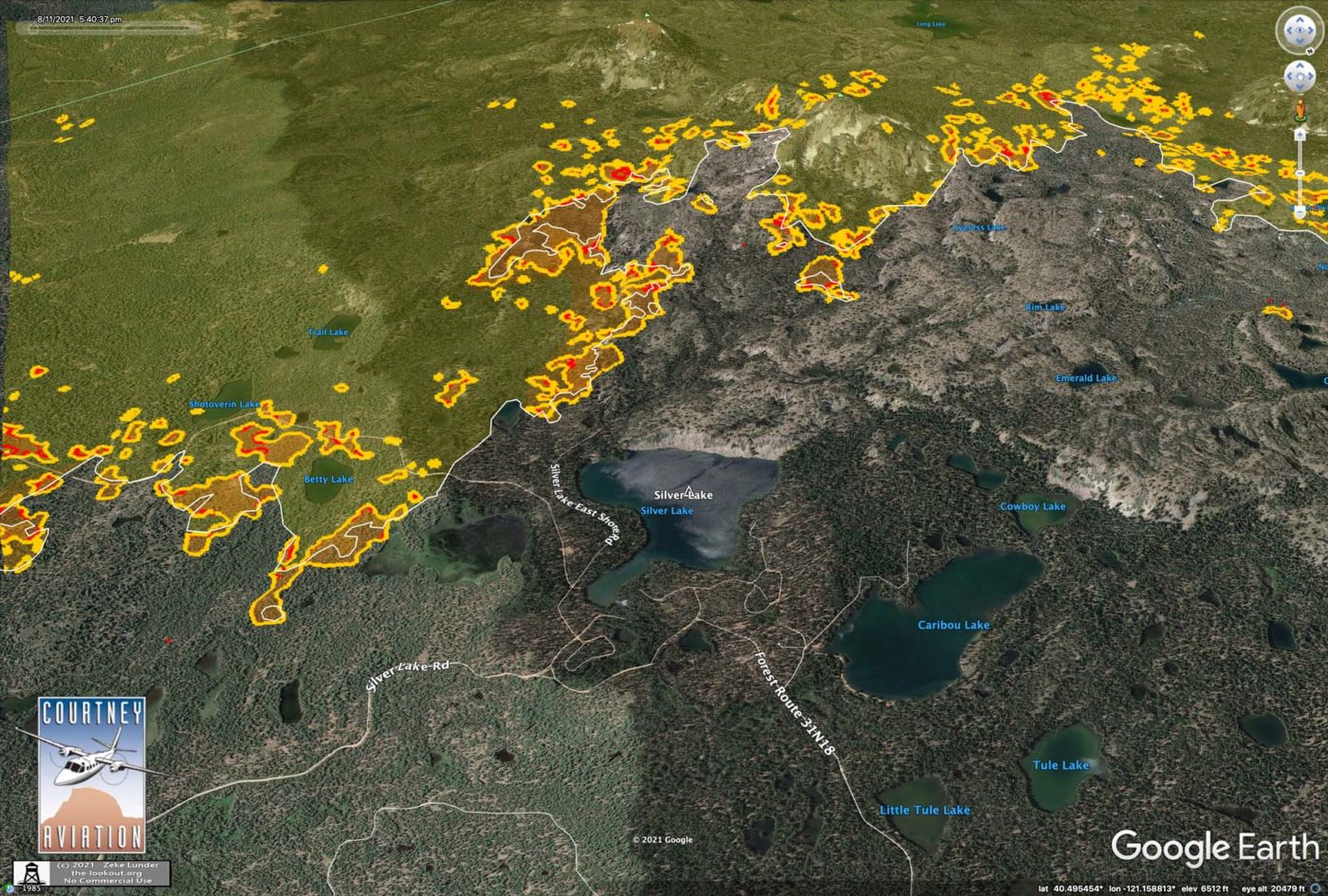 West of Mount Harkness and Warner Valley, the fire made a run west on Kelly Mountain, above Willow Lake. The fire also spotted 3,000 feet across the Valley to the West here. Warner Valley is left of center in this image. 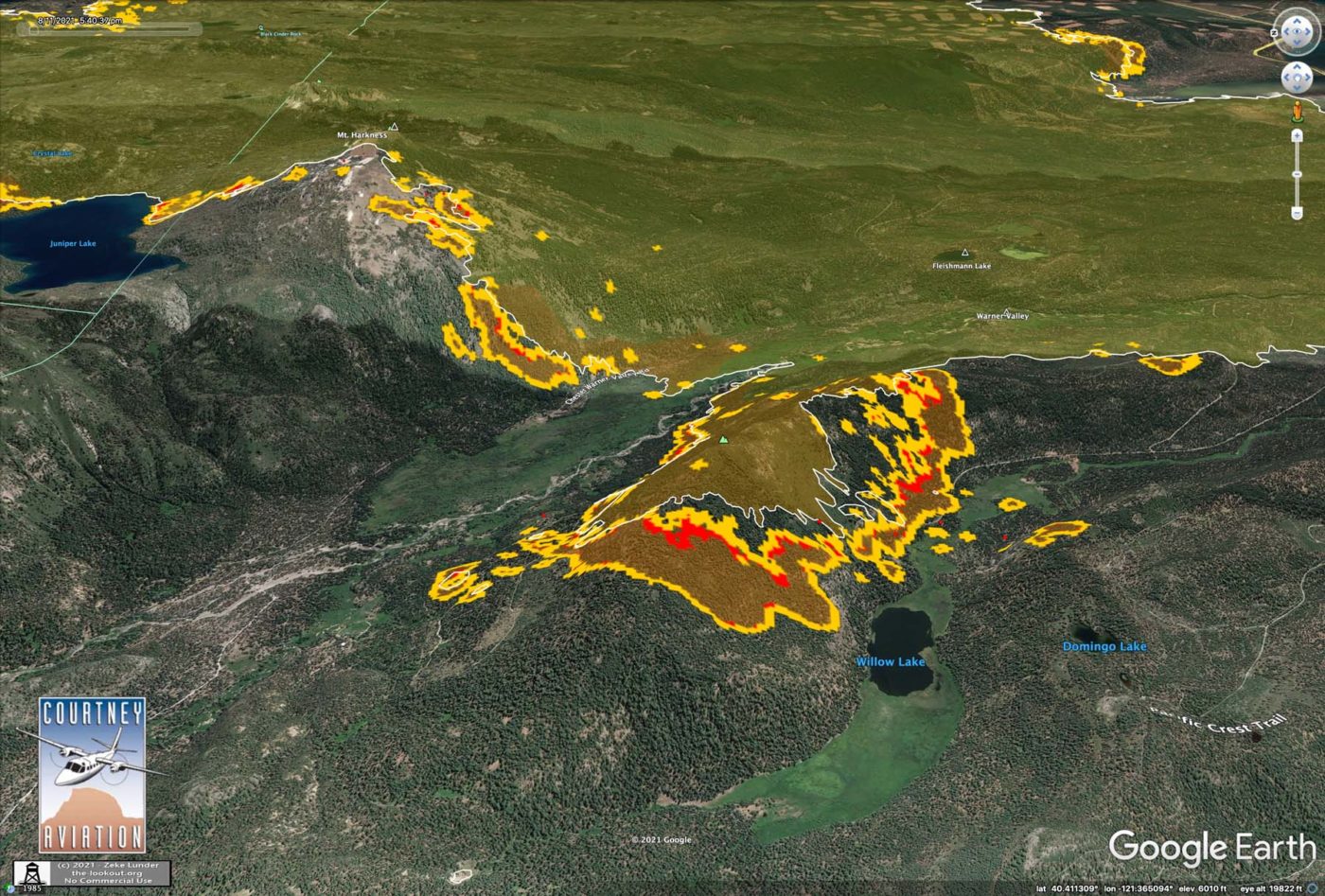 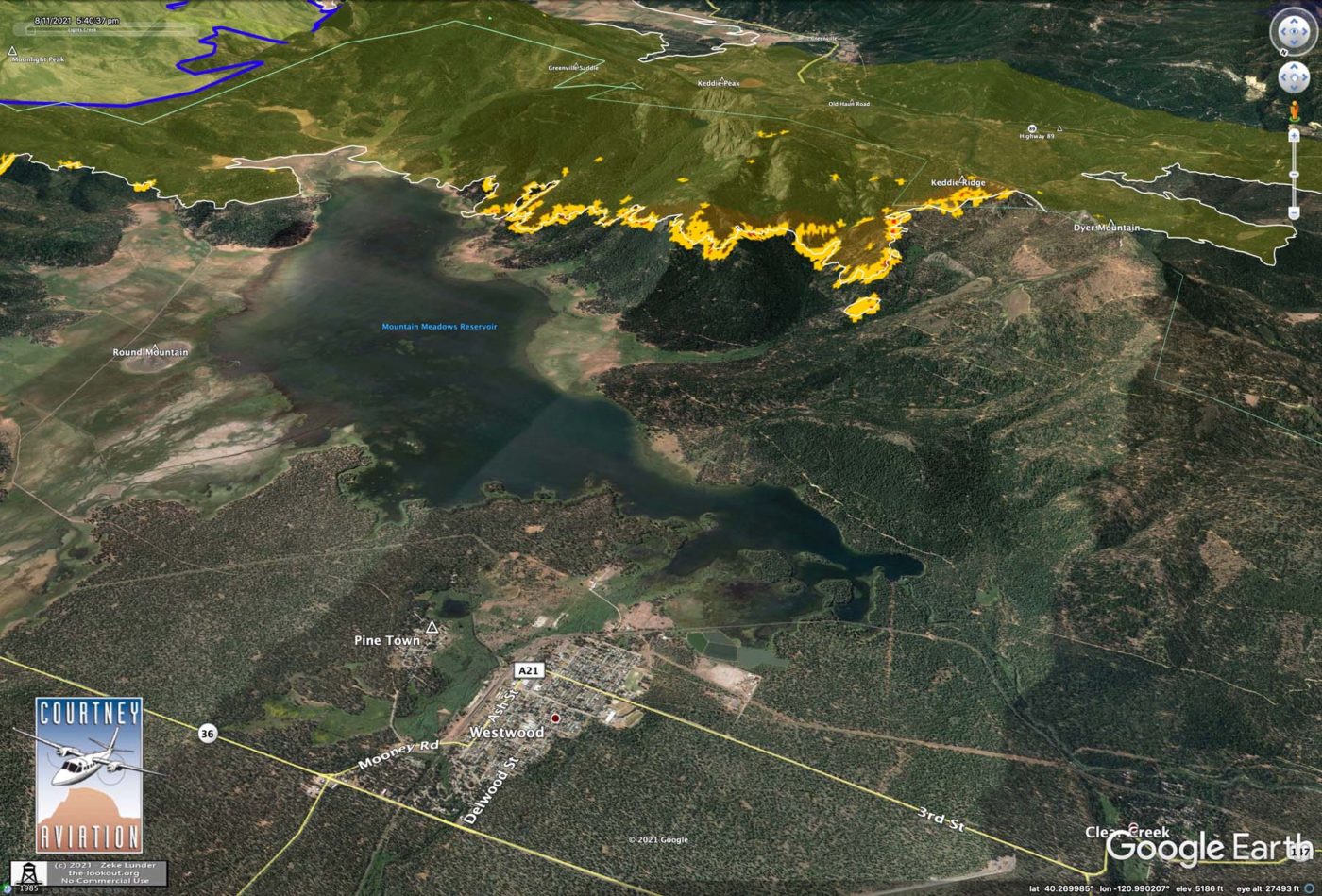 The fire in Carter Creek, South of Highway 32/36 intersection didn’t move much today. There is a new spot of fire along the top of the ridge at the PCT on the divide between Carter and Elam Creeks. This is likely part of a firing operation to tie in the dozerline on this ridge. 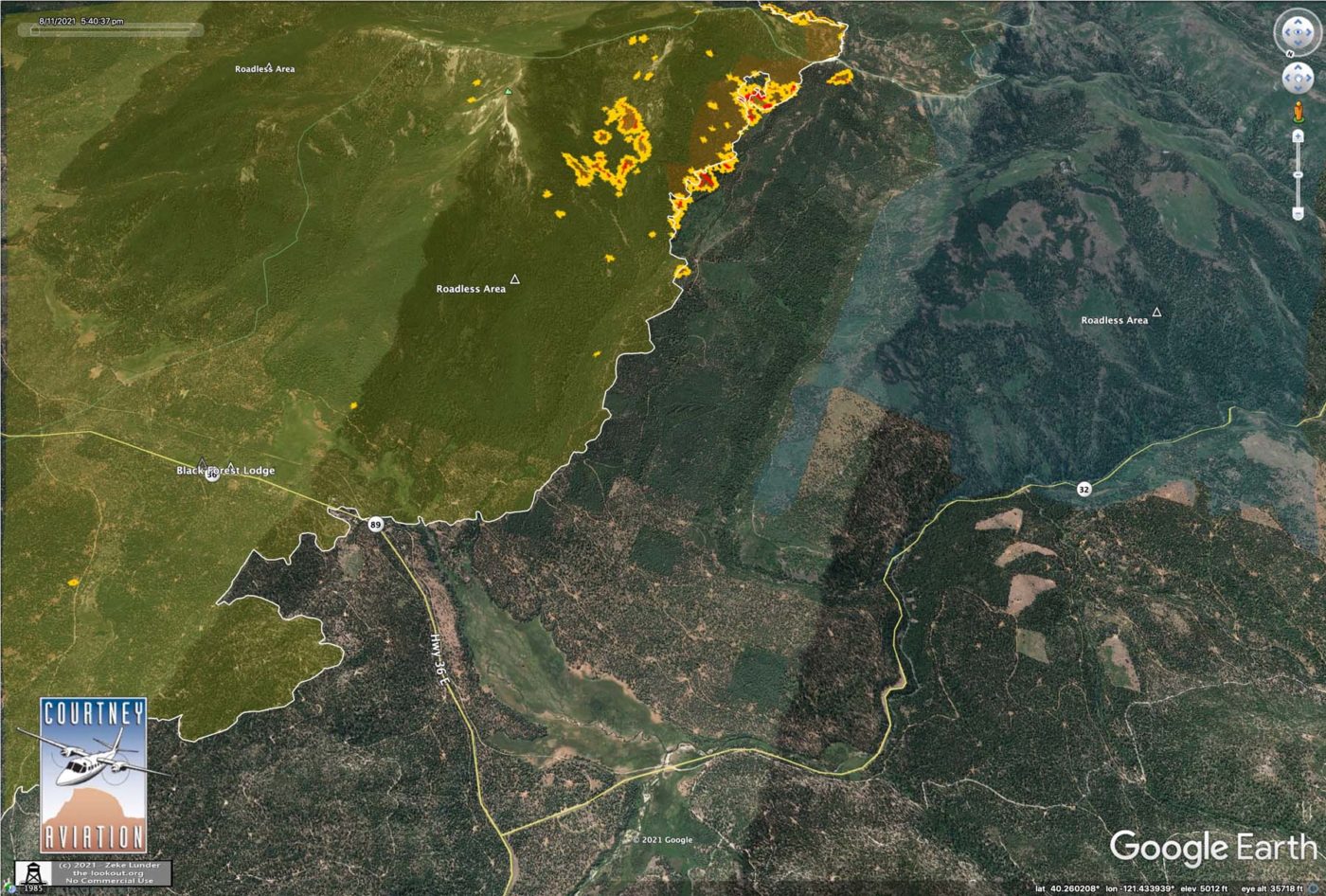 That’s all for now. If nothing moves much overnight, I may skip the morning update tomorrow.

If these posts are helping you out, consider donating to The Lookout. We are still working out what the website will be, but donations will help me hire some help to create content and stories to help us move forward through this disaster.