UPDATE: 6pm IR.
It looks like they were able to hook the spot fire on Fredonyer we were looking at earlier this afternoon. There is a small slopover on Hamilton Mountain Road in the same area, but no major blowouts along the road. I would expect crews to be firing the rest of this road tonight. Elsewhere, there was slow spread toward Genesee and on the Grizzly Peak spot fire as of 5:30 pm.

This is a view of Hamilton Mountain Road south of Highway 36 at Fredonyer Snow Park. 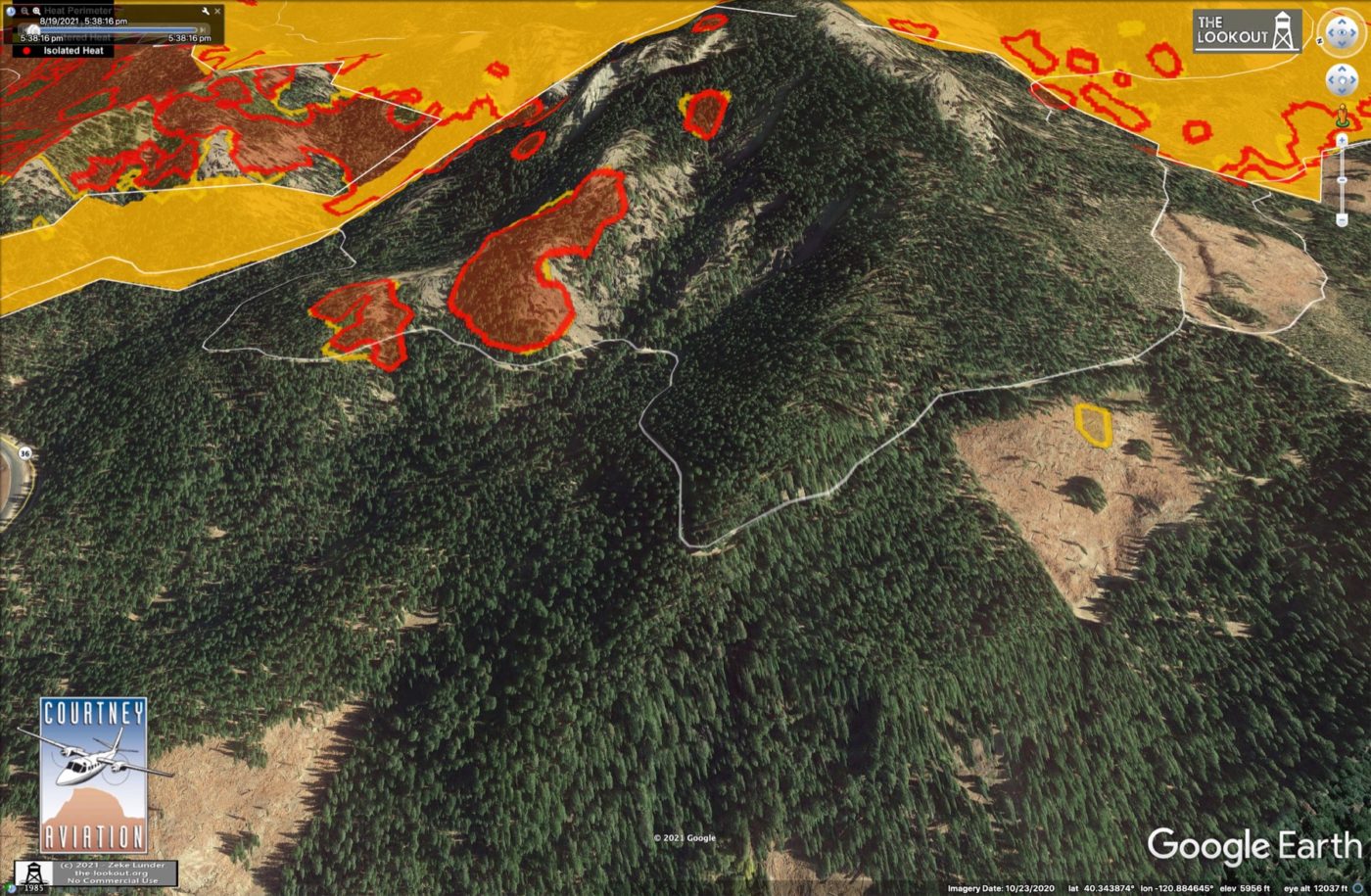 There has been more spotty spread on the finger above Mill Creek and more spread down the slope. Also, there is fire on the slope above Highway 36 around Wilson Lake Road east of Highlands, which has not crossed the highway. 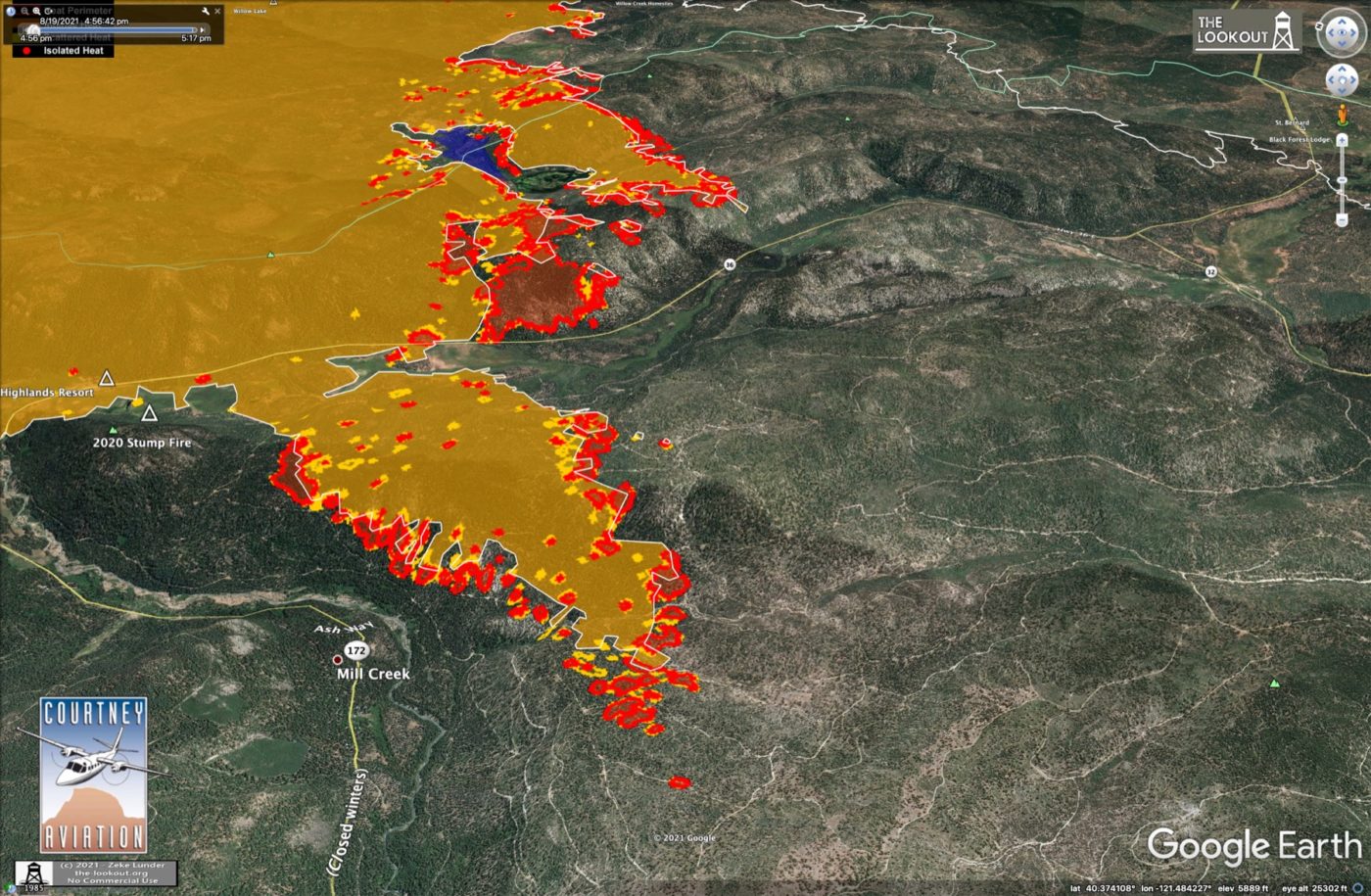 What’s Next for North Edge of Fire?
The northern edge of the fire south of Highway 44 still has quite a bit of heat in it, though the northeast winds have kept the fire from advancing much. Firefighters have prepared a major dozer line along important forest roads outside of the Lassen Park and Caribou Wilderness. 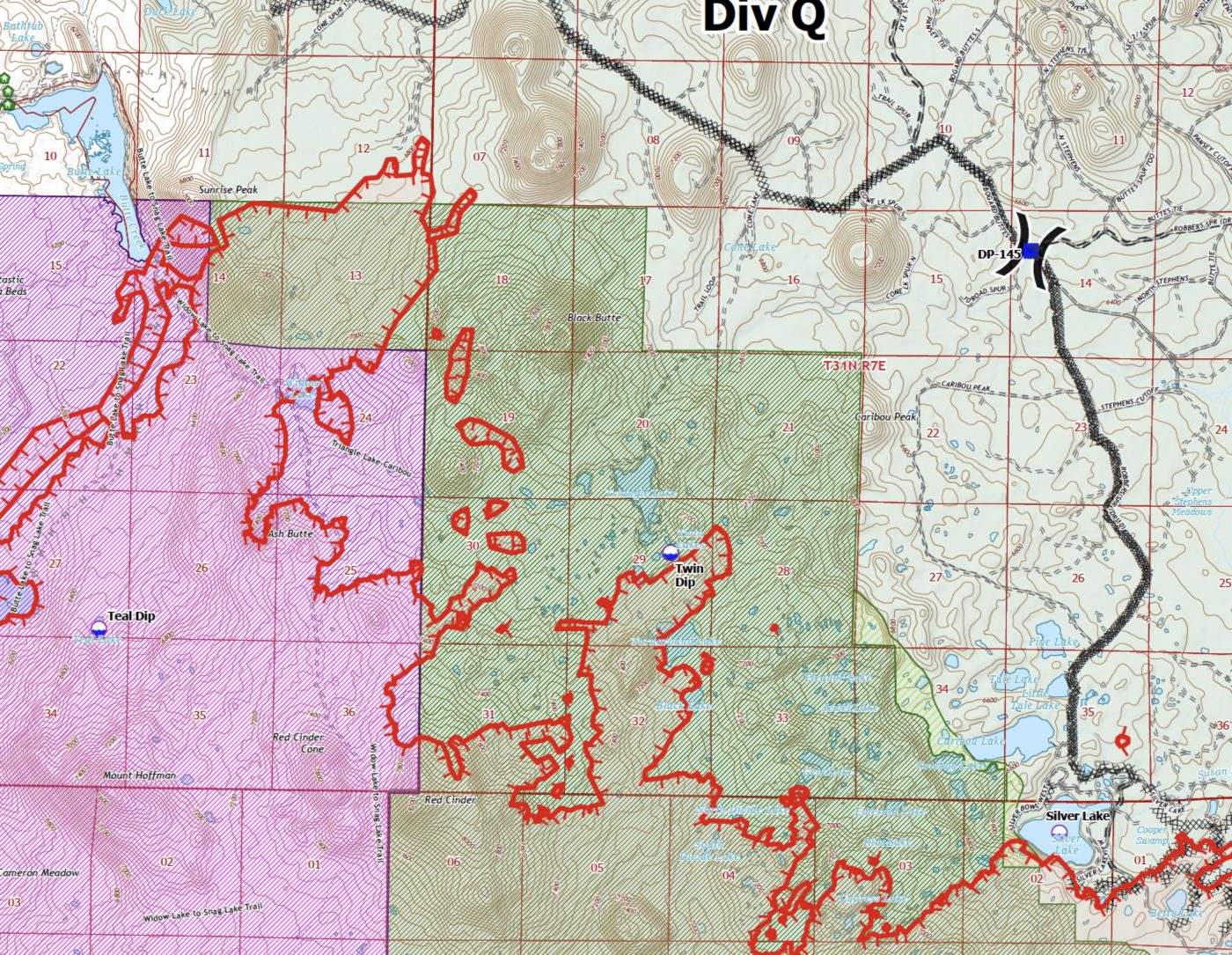 With a switch back to onshore (southwest) flow over the weekend, this section of the fire could rewaken. The fire is currently hung up in red fir forests at about 7,000′ elevation. As daytime temperatures start to cool off (low of 42° F forecast for tonight with 62% humidity) and days get shorter, the fire may not move much, but heavy winds could change that. Highway 44 is at about 5,500′ elevation.

Moving north and downslope out of the high country, the forest changes from primarily fir to more pine. This is significant because short-needled trees like fir create a very compact layer of litter that doesn’t carry fire very efficiently. This is due, in part, to the fact the true fir (red and white) live at higher elevations where the snow compacts needle litter every winter. Conversely, the long needles of pine are fluffy and better aerated. Growing at lower elevations, fallen pine needles are less influenced by snowpack.

The amount of airspace in a fuelbed is very important when controlling the intensity of a fire. Think of stacking all of your kindling in a bundle like a handful of dry spaghetti noodles — it doesn’t burn very well. But if you spread the material out like pickup sticks, it burns much better. Same idea with pine needles.

Notice the skinny red shape running straight north of Butte Lake in the map below. This is a mapped fire scar. The skinny, long shape tells you the fire burned under very high winds, and that these sorts of intense, focused wind events are integral to understanding how this area works. Really interesting things  happen when winds are focused and intensified by topographic features like in this area. When I worked for the US Forest Service in this area in the mid-90s, we measured a bunch of blown-down trees that were being sold. The blowdown was severe, with large trees stacked like pickup sticks, but it only occurred in small patches of about an acre, scattered here or there over many miles. Going into the windy fall season, events like this may blow out random sections of this flank of the fire. 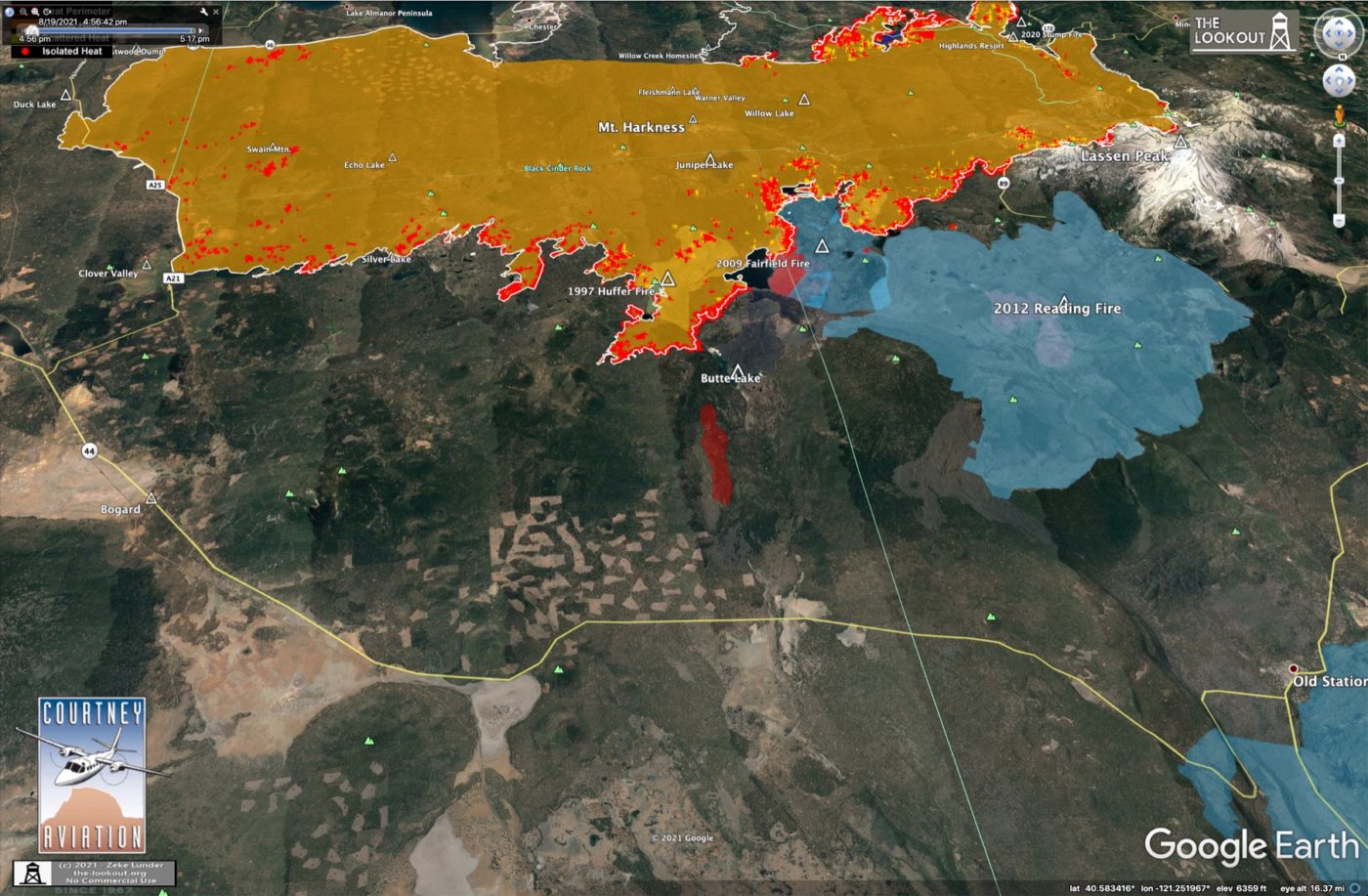 Check out the terrain in the middle of the image above in the eastern reaches of Lassen Park. The small volcanic spatter-cones and ridges along the flows help to funnel the winds on this landscape in strange and powerful ways. 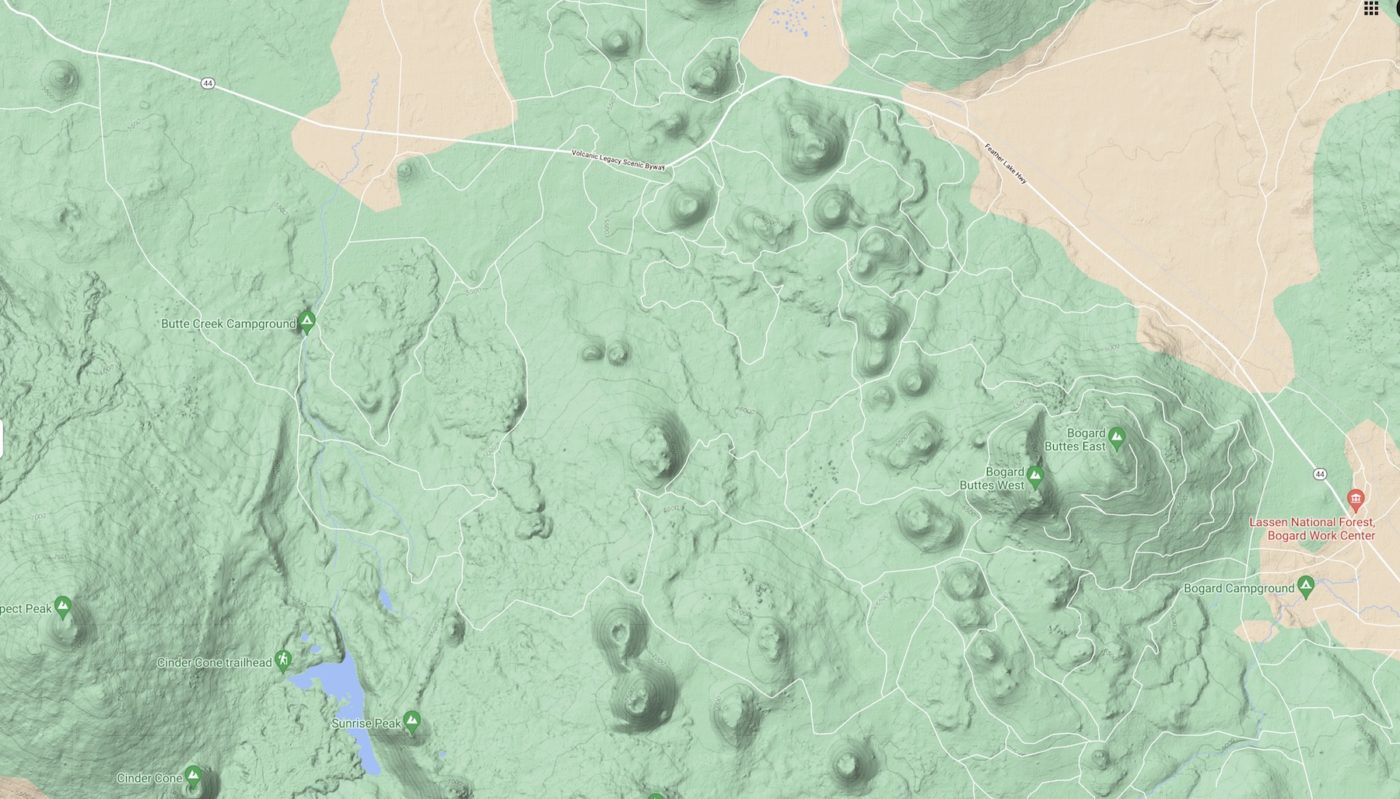 There is a ongoing firing operation on the east side of Fredonyer Summit. The eastern boundary is the Willard Creek Road, and I believe the western edge is Mount Hamilton/Snow Park Road. I don’t have any field intel on this, just guessing based on where the heat is and has been in past imagery. NOTE: The spot fire on these earlier maps looks like it has been contained. 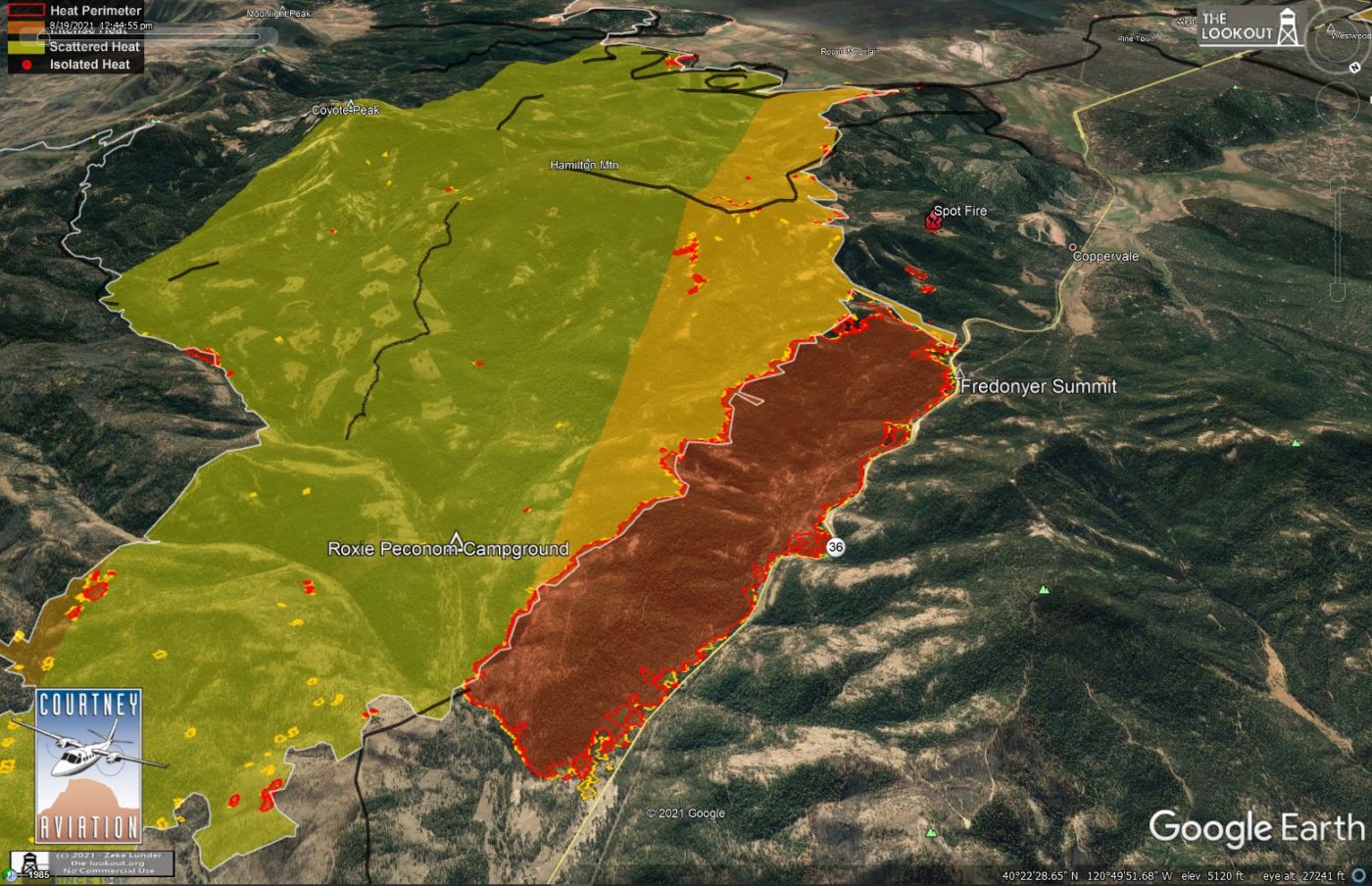 Fredonyer Summit doesn’t look like much on this image, but it’s actually the drainage divide between the Pacific Ocean and the Great Basin Desert. Rain falling on the west side of this picture drains into the North Fork Feather River, and the east side drains to the desert, evaporating out of Honey Lake, if it makes it that far. This is one of the reasons there is such squirrely weather here; we are at the intersection of three massive landforms, each with their own temperament. On any given day, you might have relatively moist afternoon breezes coming up from the Sacramento River Delta through the Feather River, cold north winds blowing down the eastern side of the Cascades from British Columbia, or gusty northeast winds like we have today, the remnants of a weather system advancing from Northern Nevada to Northern Wyoming.

Fighting fire in the desert is a whole different game than fighting fire on the west side. And the east side has its own rules, too. The playbook can change by the minute and a lot of people learned this the hard way last year during the Hog Fire. The Hog was only a few miles from here, and the way it was kicking our asses, it would have burned all of this land if we hadn’t been blessed with a sudden downpour, bringing two inches of rain in about 15 minutes. 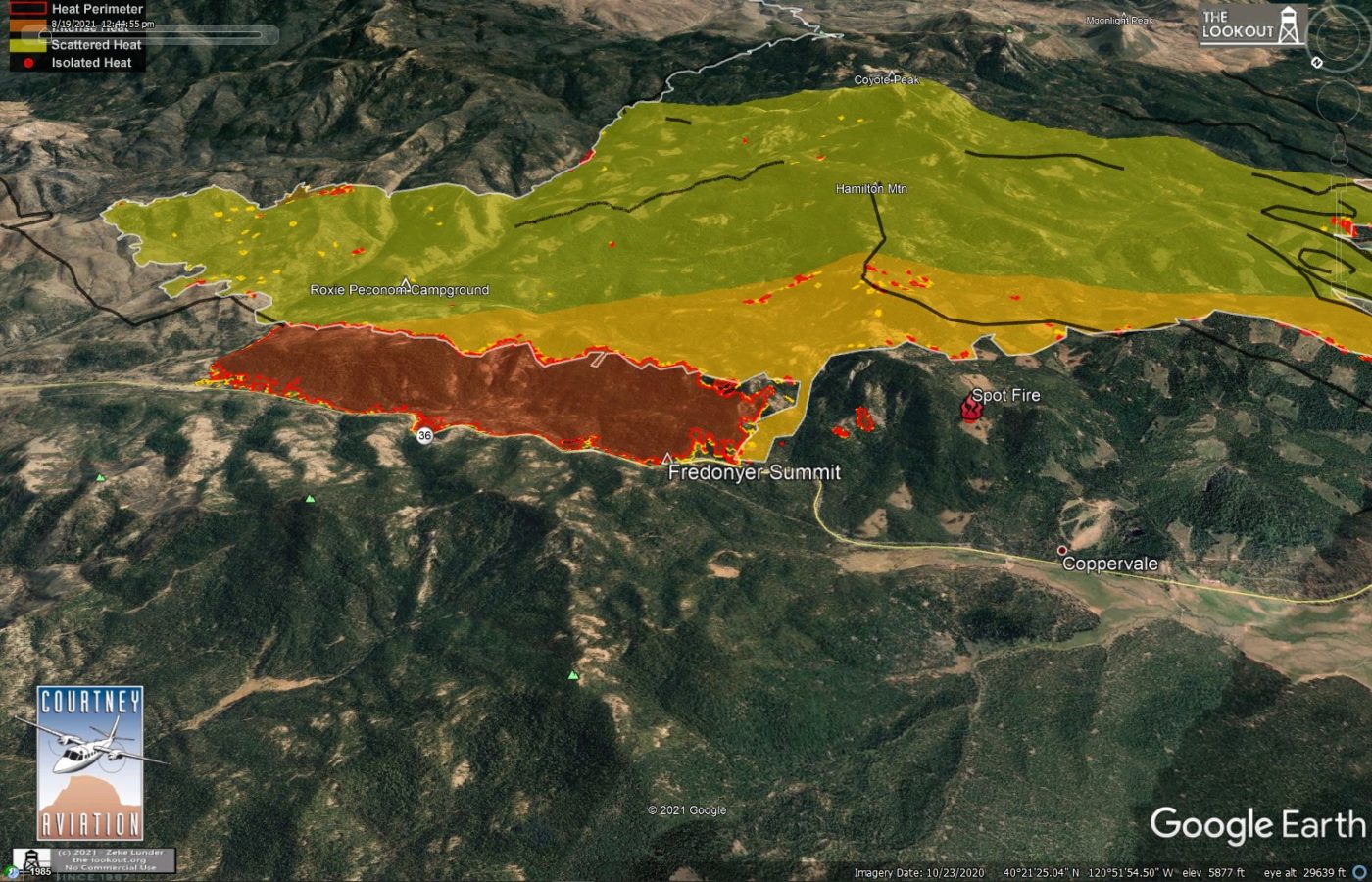 If they are trying to hold the fire at the Hamilton Mountain Road, it looks like they picked up the spot fire this afternoon and may be able to hold fire at the road. Generally, holding midslope roads can be very difficult, especially in doghair fir thickets in the middle of a drought on a gusty day at the crossroads of intense, competing weather systems. If they lose this line, they’ll be trying to hold Highway 36 down toward Coppervale, I’m guessing. 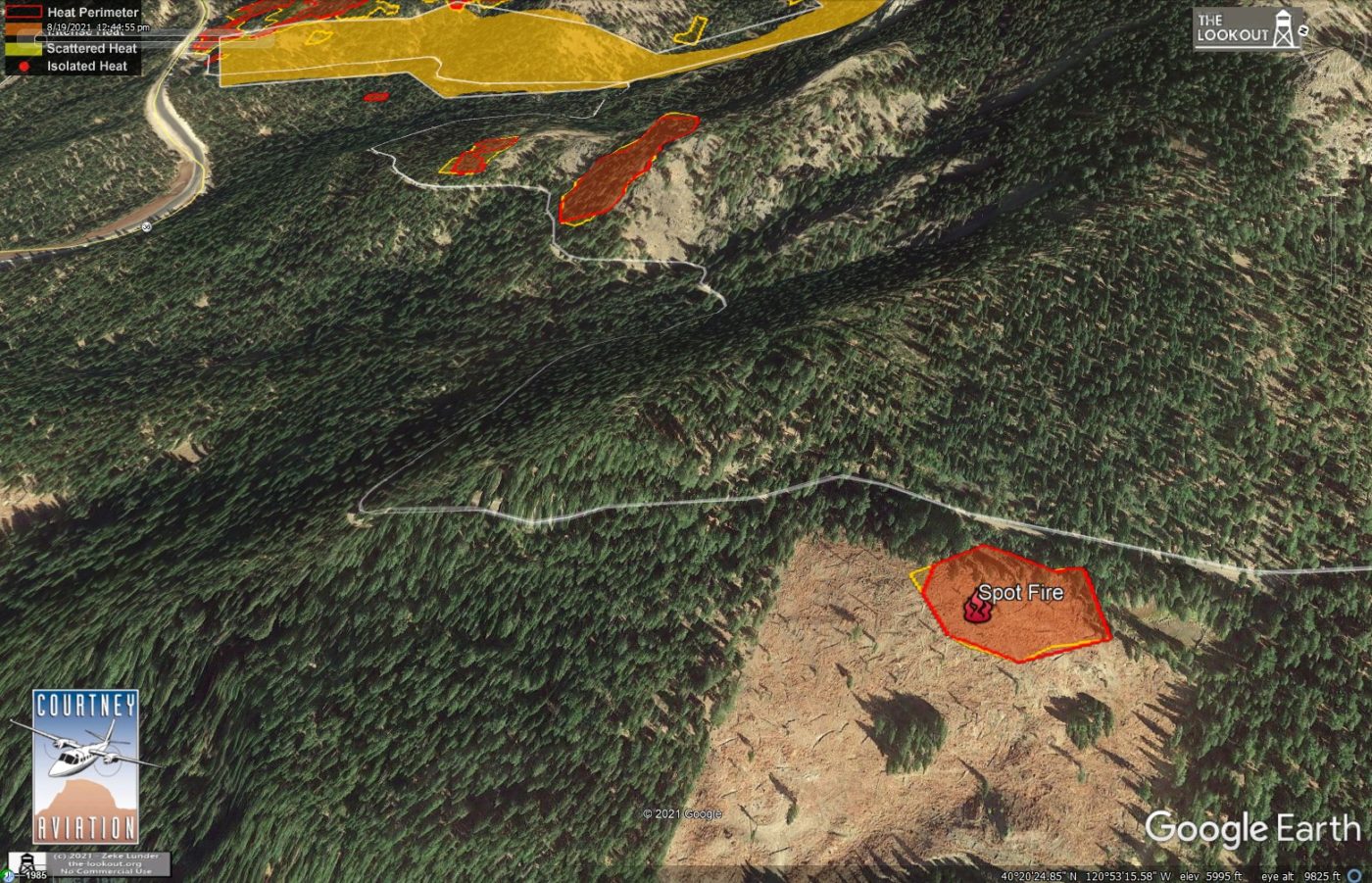 It looks like this spot fire has been contained. Back in the day, we used to burn clearcuts after we logged them and this solved this problem of flammability pretty well. Liability concerns drove the risk managers at big timber companies to confiscate their foresters’ drip torches, however, so here we are.

Elsewhere on the east side of the Dixie, the fire above Beardsley Grade is backing actively down into Genesee above the Store. 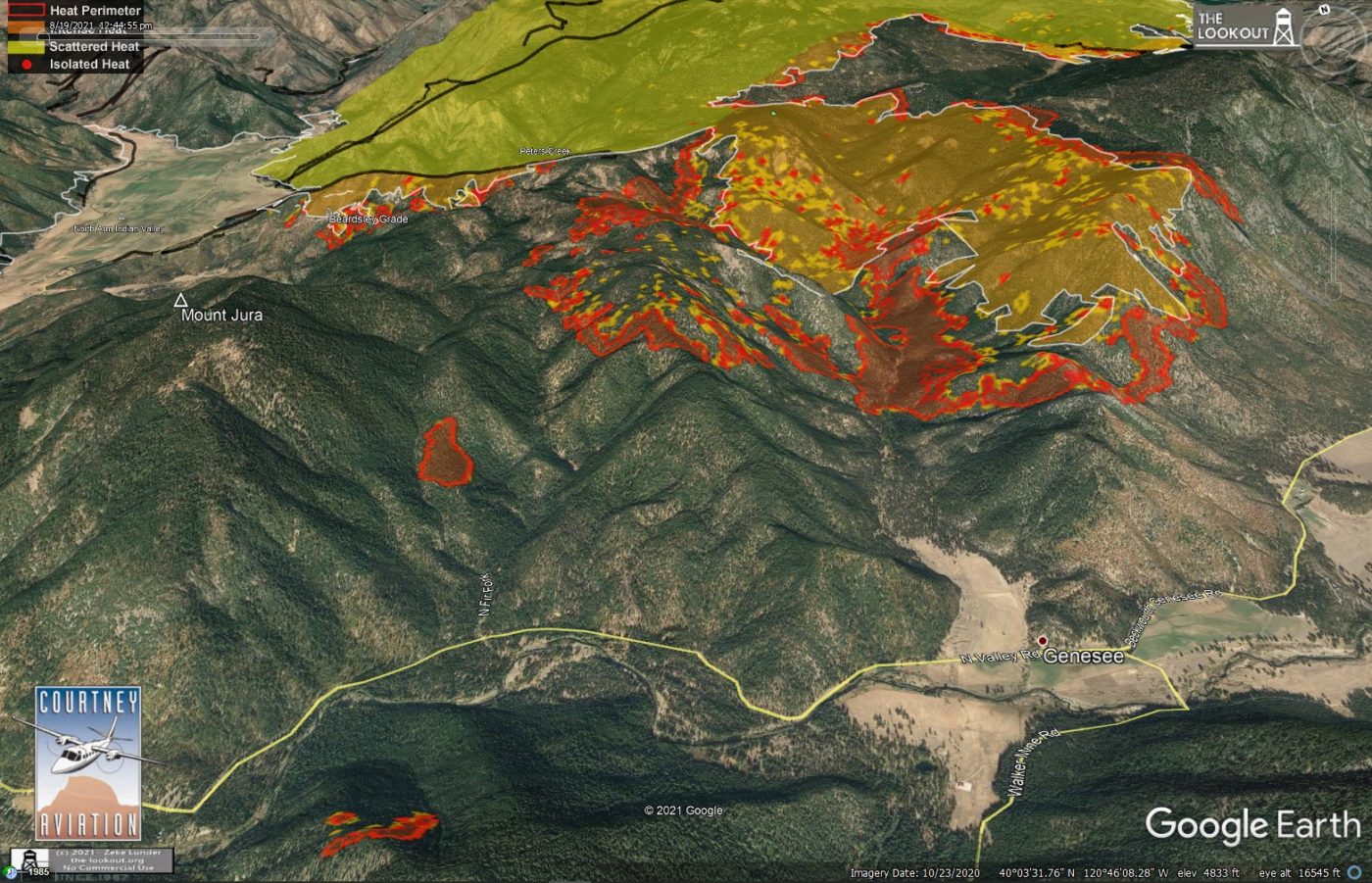 There is a spot fire headed up Grizzly Ridge. This is some of the steepest, wildest ground in Northeastern California. I only know a couple of people who have even walked where the spot is burning. 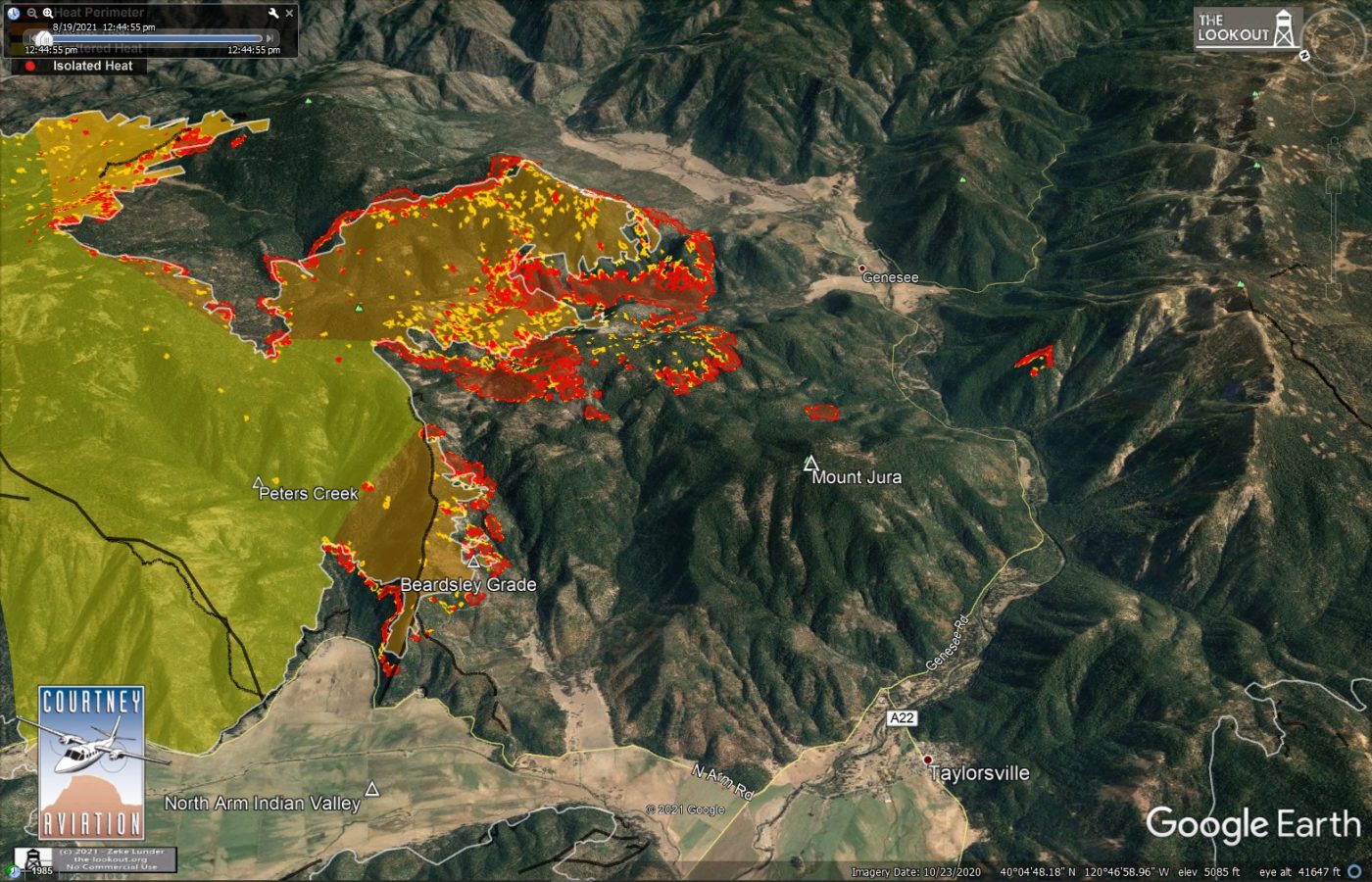 The spot fire on Grizzly Ridge could be bad news for the ridge and might be visible from the Quincy area. Winds are forecast to switch back to the southwest around midday tomorrow. There are some contingency dozer lines on the ridge and the fuels are more sparse at the top of the mountain, but the Dixie Fire ran hard over similar fuels on Keddie Ridge several weeks ago, albeit under much different weather circumstances. Atmospheric stability is much higher than during big runs last week, so that lowers the chances of a massive pyrocumulus column popping up on this. 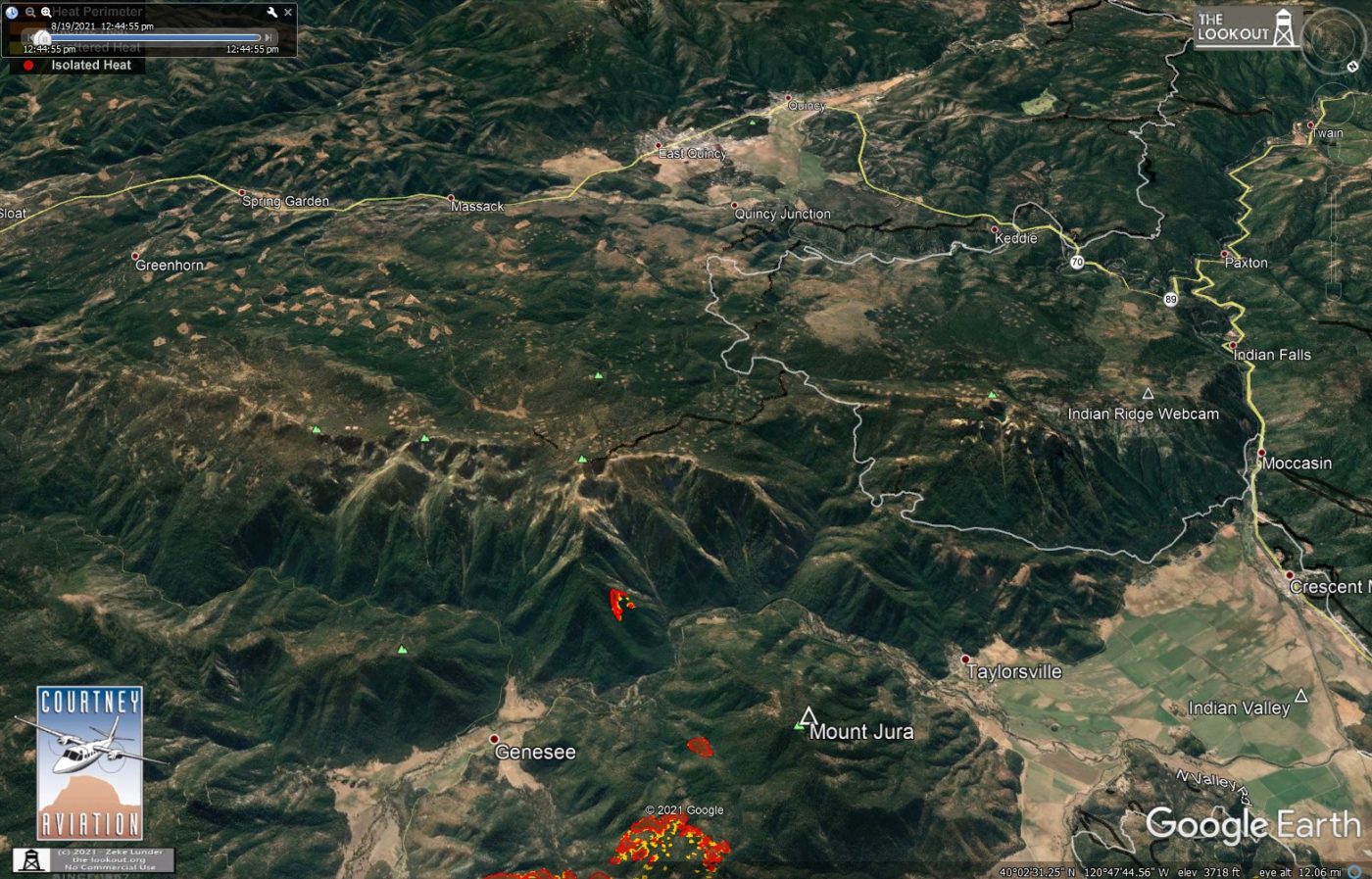 Over by Childs Meadows, the finger of fire headed onto the Mill Creek Plateau has moved about 1/2 a mile in 18 hours, with a couple spots falling off the hill and into the upper slopes of Mill Creek Canyon. These spots are in a good location to get pushed west by overnight downslope winds as cold air sinks off of the Lassen Range, just upcanyon. 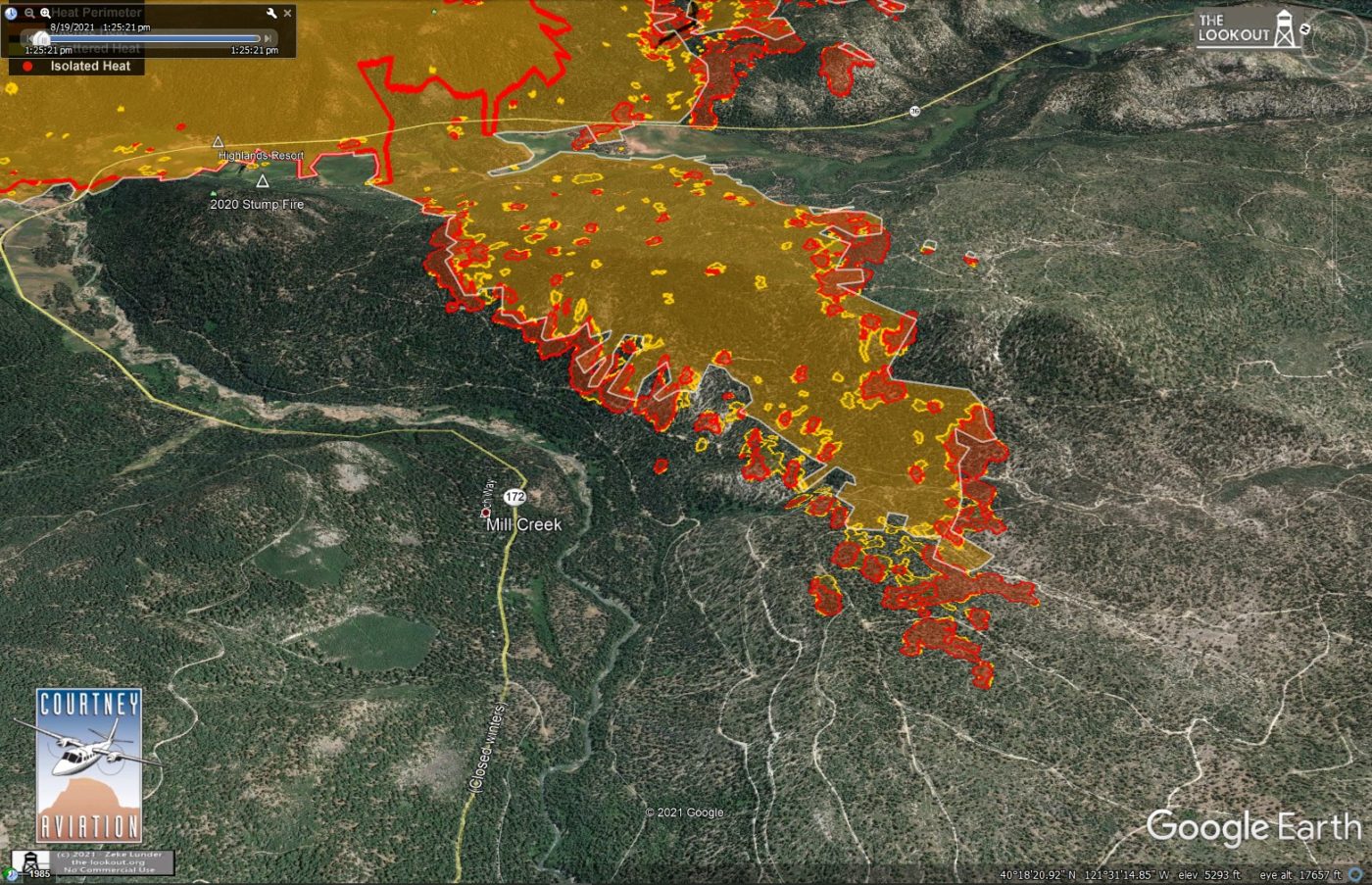 There is some spread down the hill toward Highway 36, near the Wilson Lake Road, east of Highlands Resort. 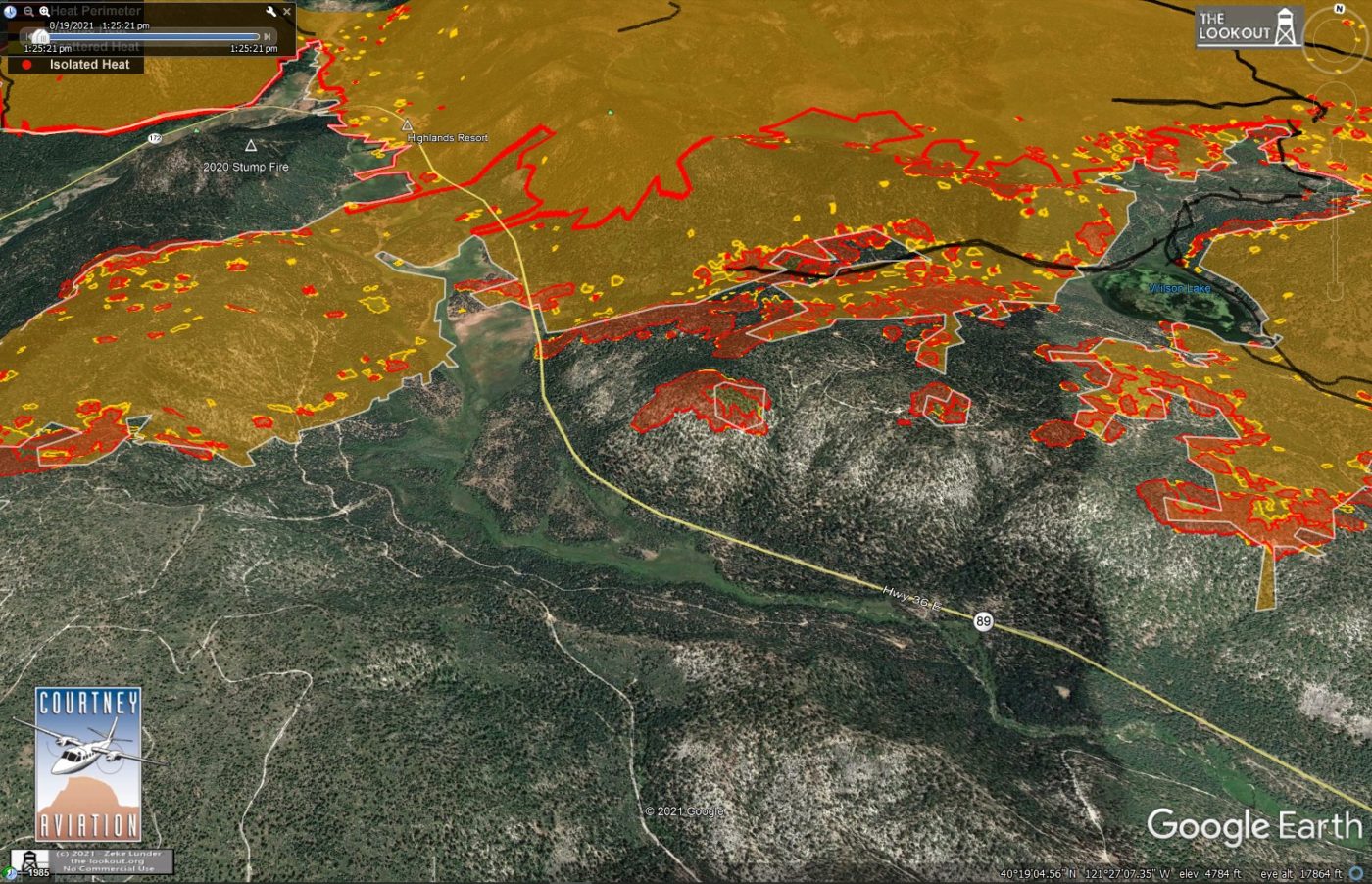 I am so glad to see things are settling down enough for some people to get home again. The fire is still moving in a few places, but all-in-all, the bulk of the firefighting has held up really well in face of the strong northeast winds.

Forecasts
UPDATE: 12:00pm. Some of the smoke over the Dixie Fire is coming down from Washington. Winds are still coming out of the northeast over the western part of the fire, and not as gusty as yesterday. 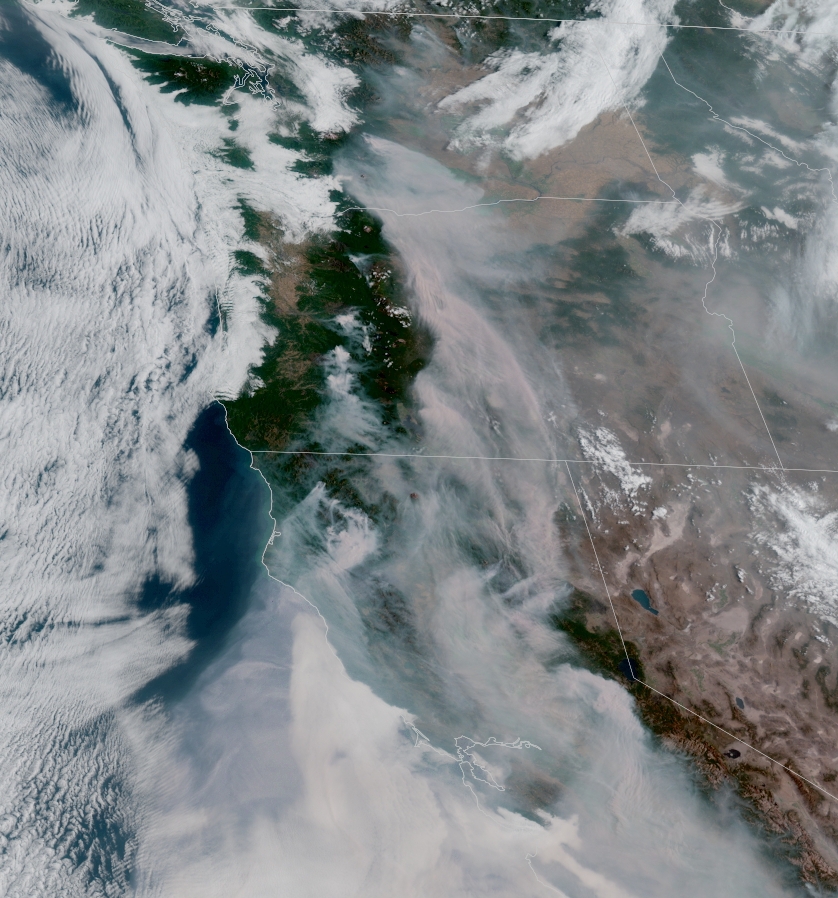 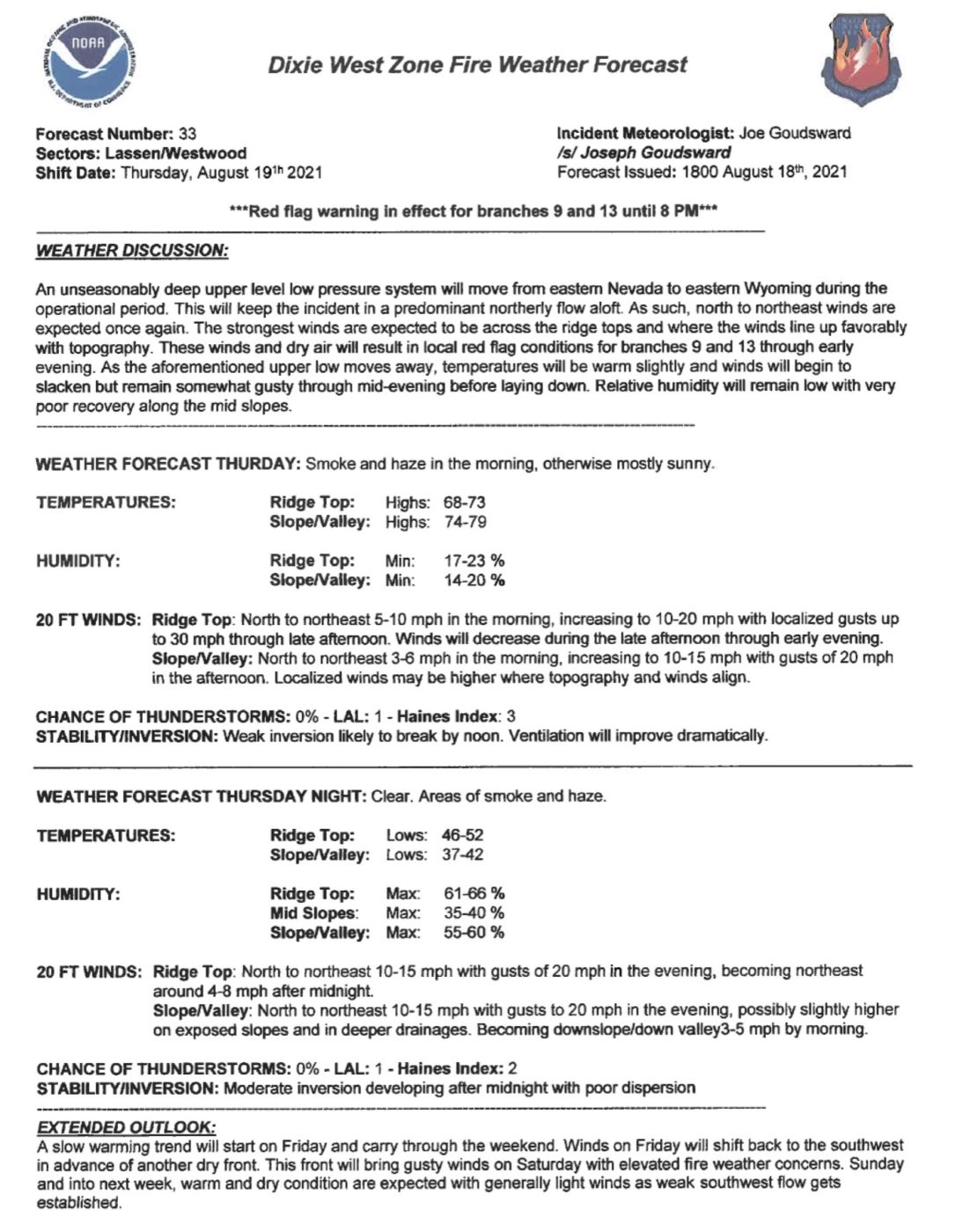 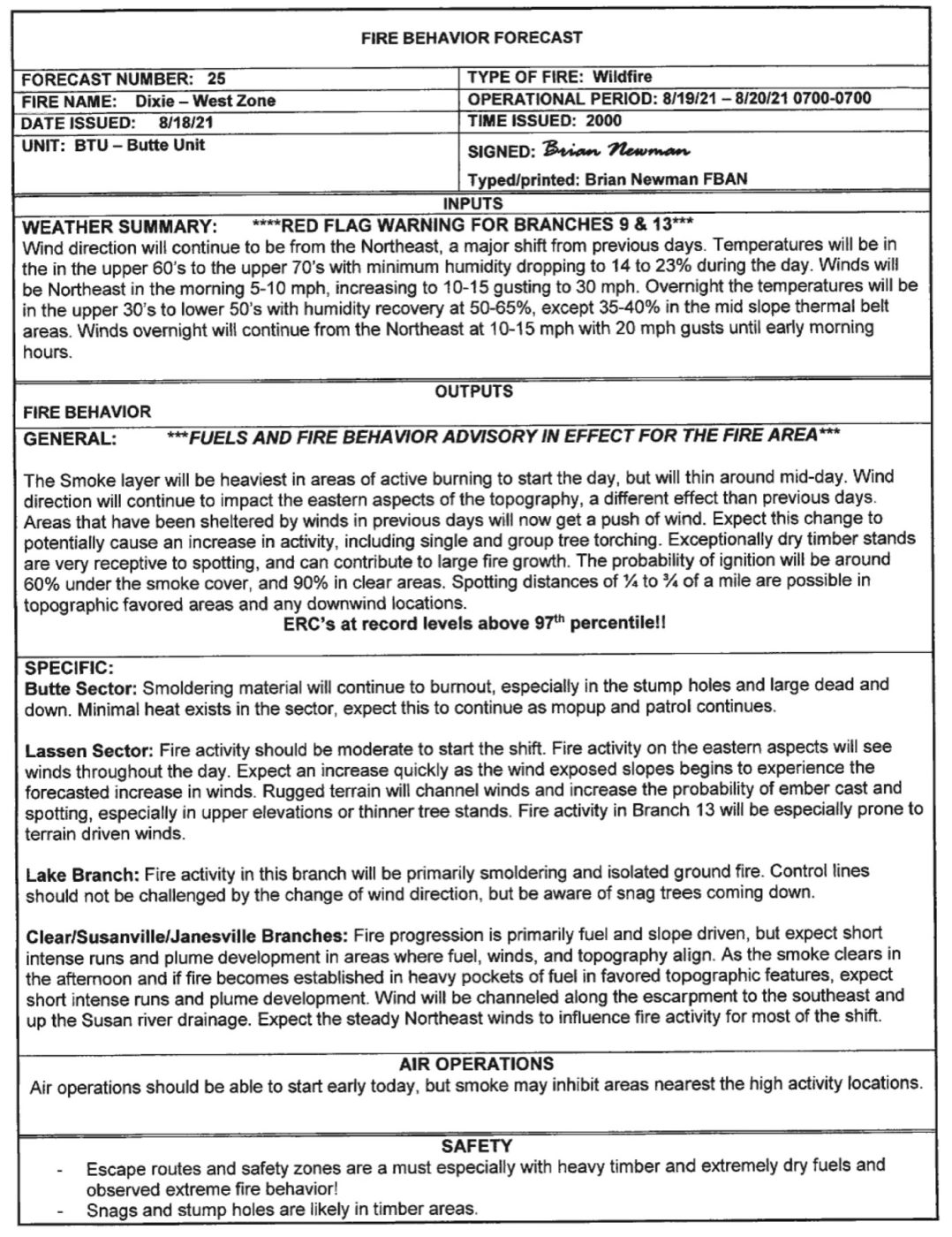 In the big-picture of the Dixie Fire, the movement yesterday of the fire onto the Mill Creek Plateau is probably the biggest issue of the day. These IR images were captured at 8:30pm last night, so the fire has likely spread quite a bit since then. The biggest issue here is the terrain. If the fire becomes established in the steep, roadless sections of Mill Creek Canyon, there won’t be much firefighters can do. 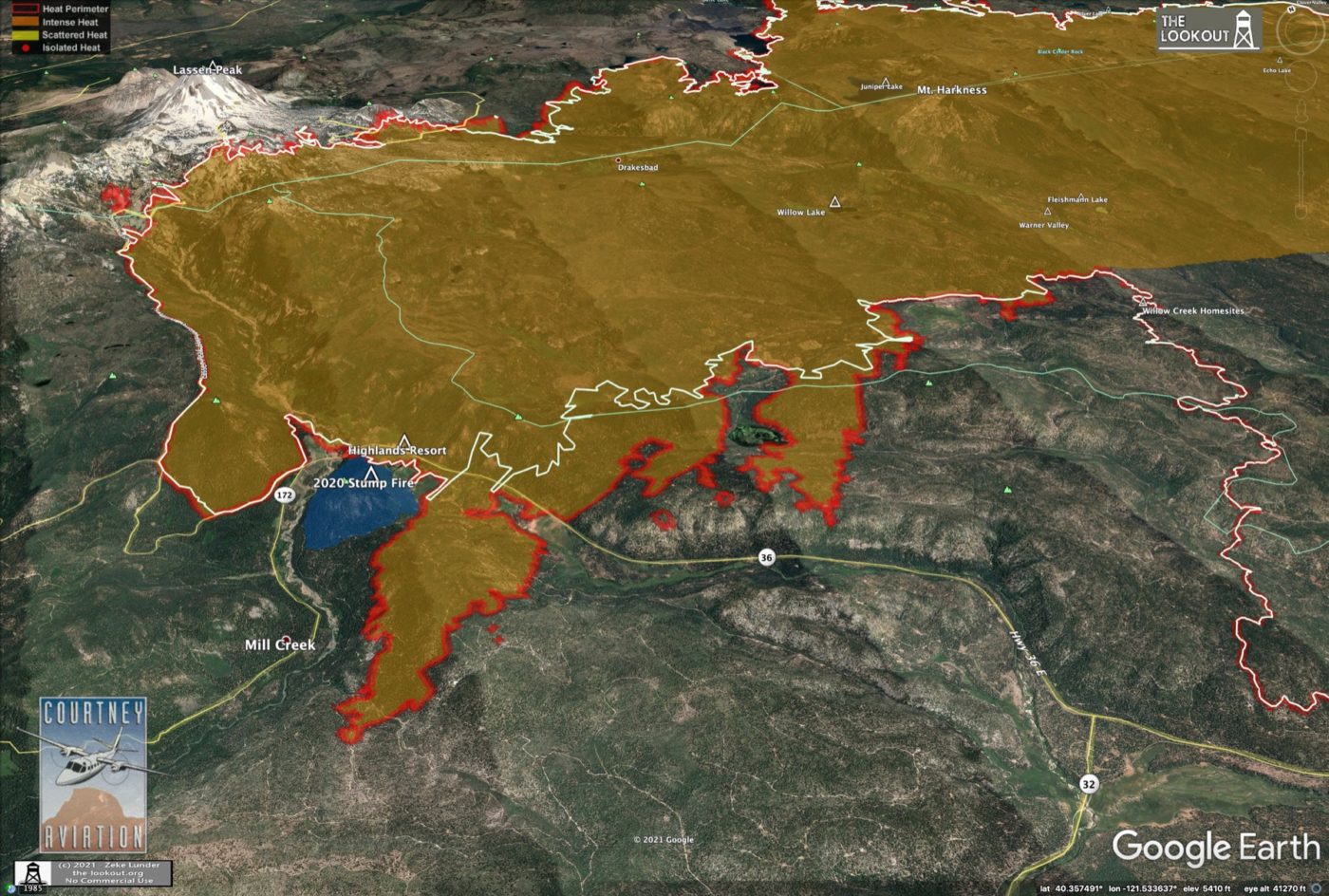 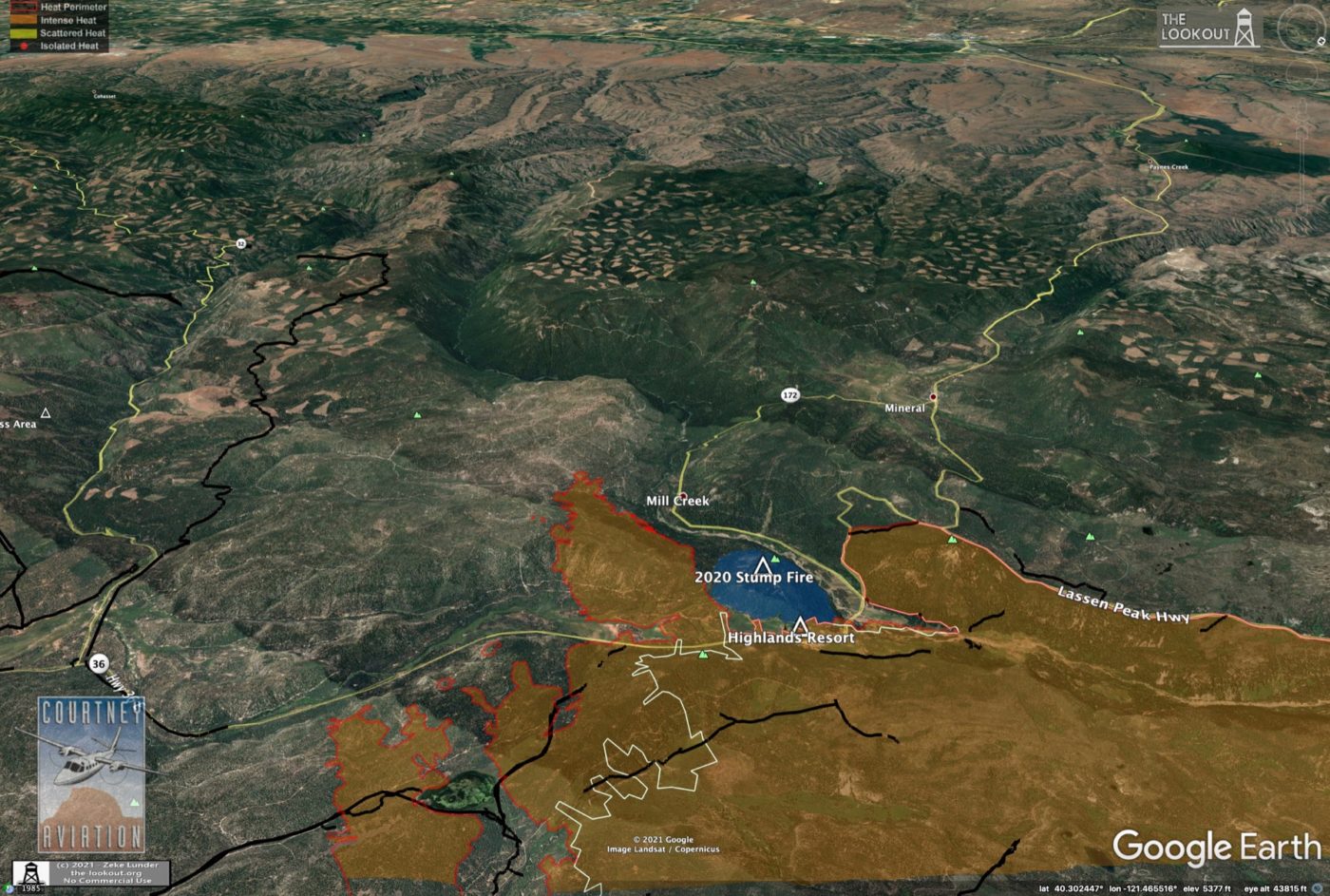 The firing operation on Highway 89 through Lassen Park seems to be holding up to the northeast winds. I think the heat slopping over 89 at the Sulphur Works is geologic, not fire. 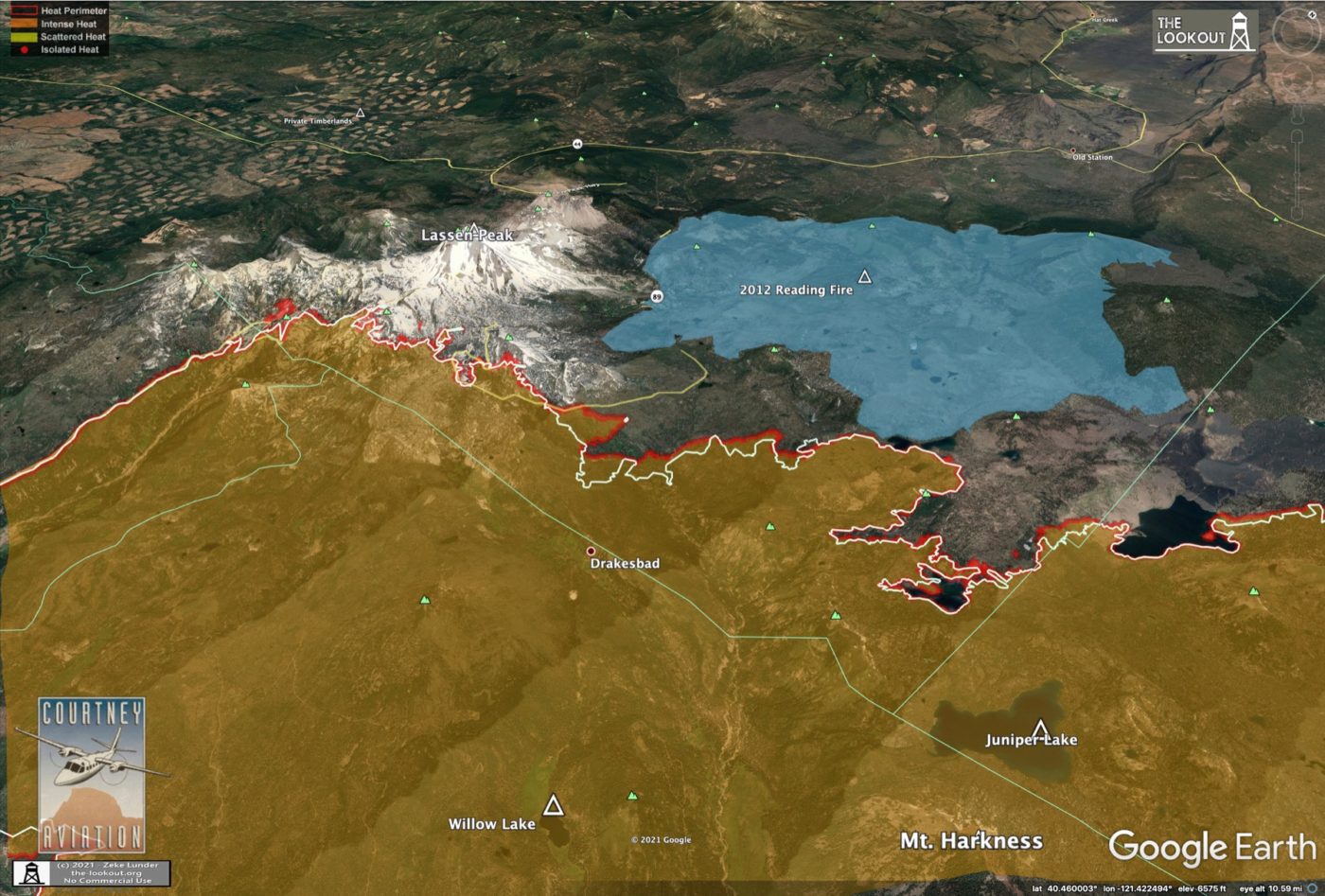 It looks like firing operations have started along the Hamilton Mountain Road at the Fredonyer Snow Park. The northeast winds are not favorable for holding the fire here, but it is one of the few tactical opportunities the landscape offers. The forests here are a lot of doghair white fir, with decades worth of dead and down material. 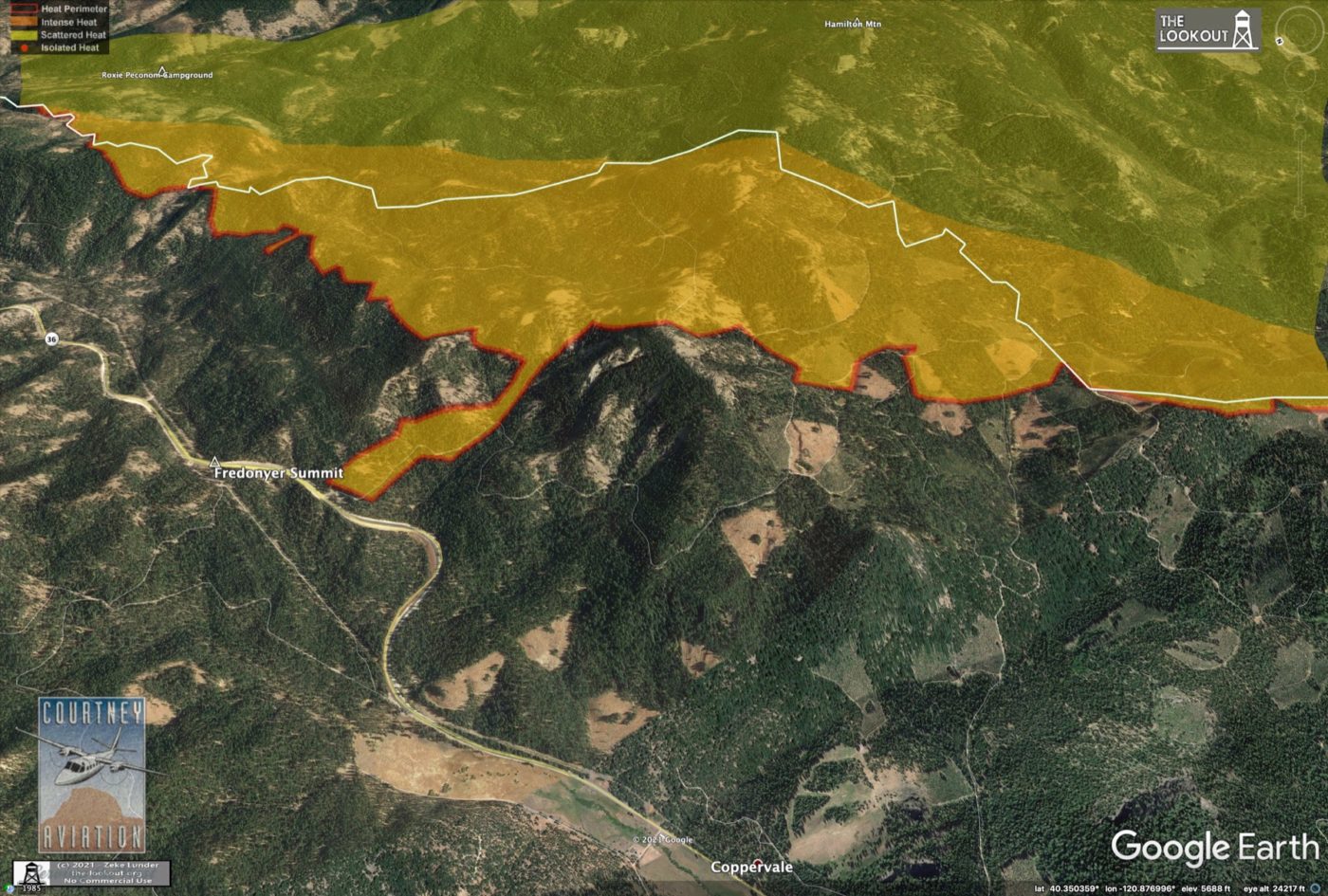 Looking east over Fredonyer Summit, much of the fire’s spread yesterday was from the north flank running back to the west, after going the opposite direction in a big run the day before. The fire hit the meadow in the afternoon and flanked to the north. Dozer lines in black. 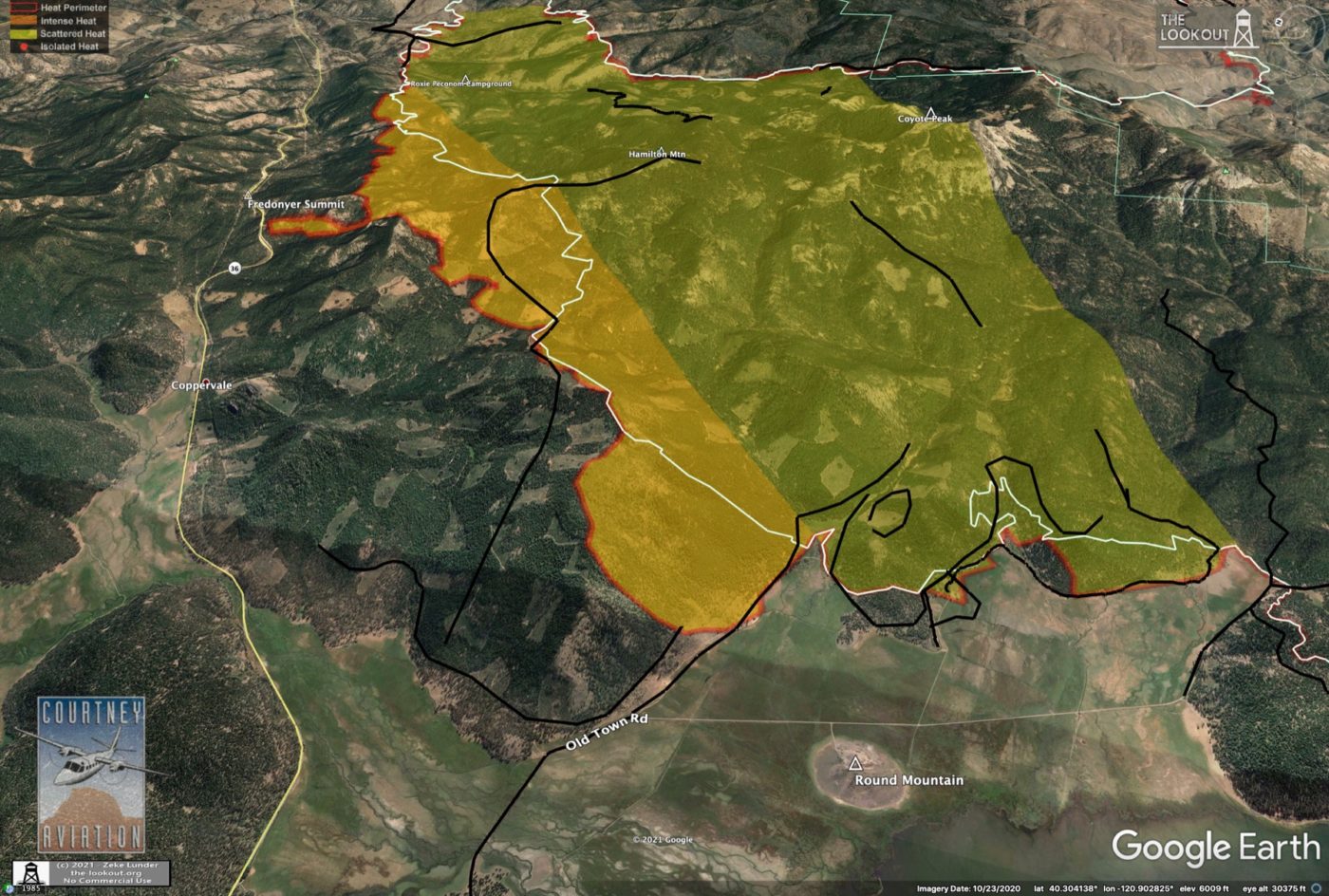 Not a lot of growth along the escarpment over the past 24 hours, shown in white. The fire did move aggressively to the west, bumping into the 2019 Walker Fire burn scar. 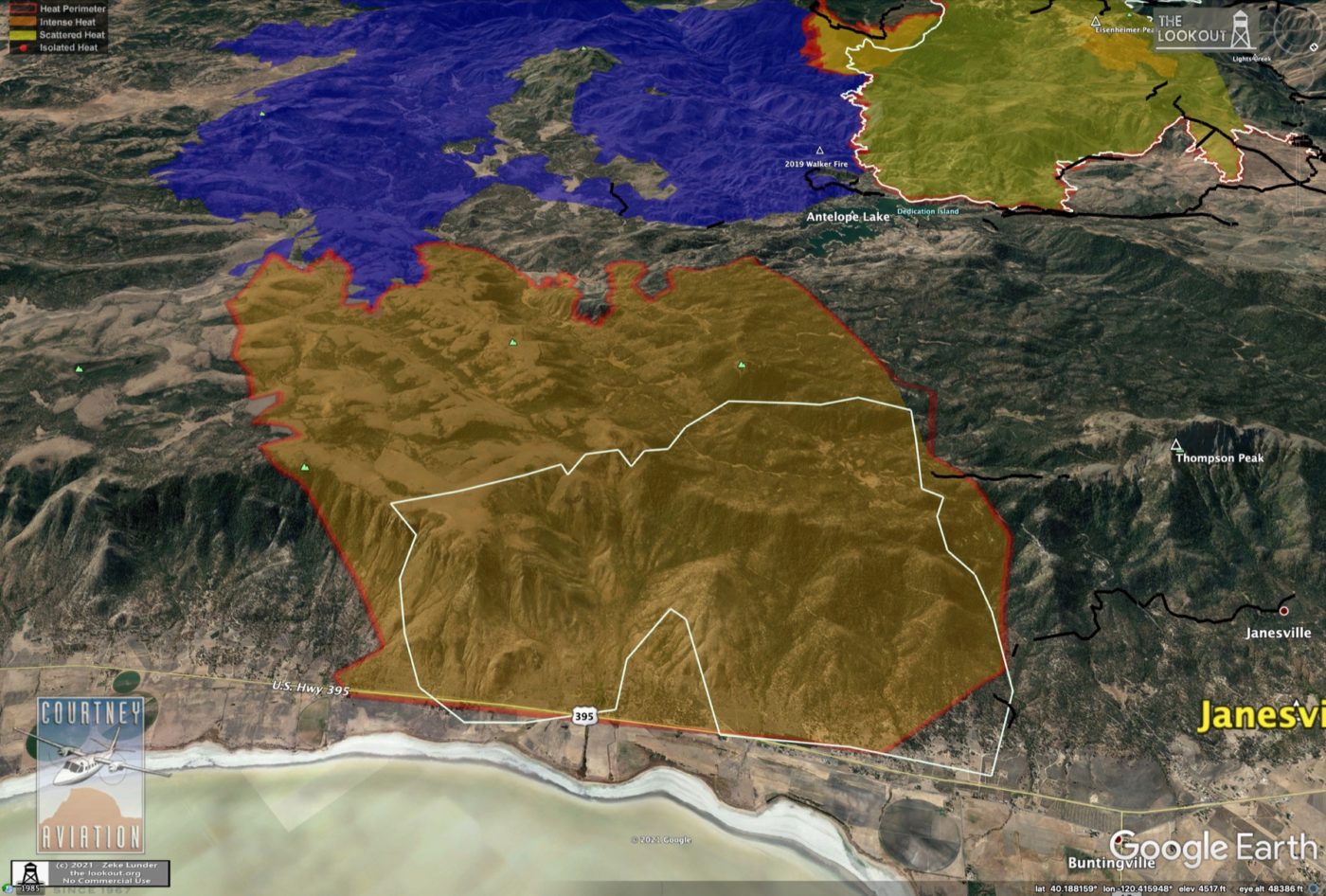 Here is a look at the progress of the fire’s spread south above Beardsley Grade. It continues to back actively toward Genesee Valley. We will likely see some slope-driven runs up flanks of Mount Jura, especially once the strong east winds stop blowing and we go back to our normal upslope daily winds. 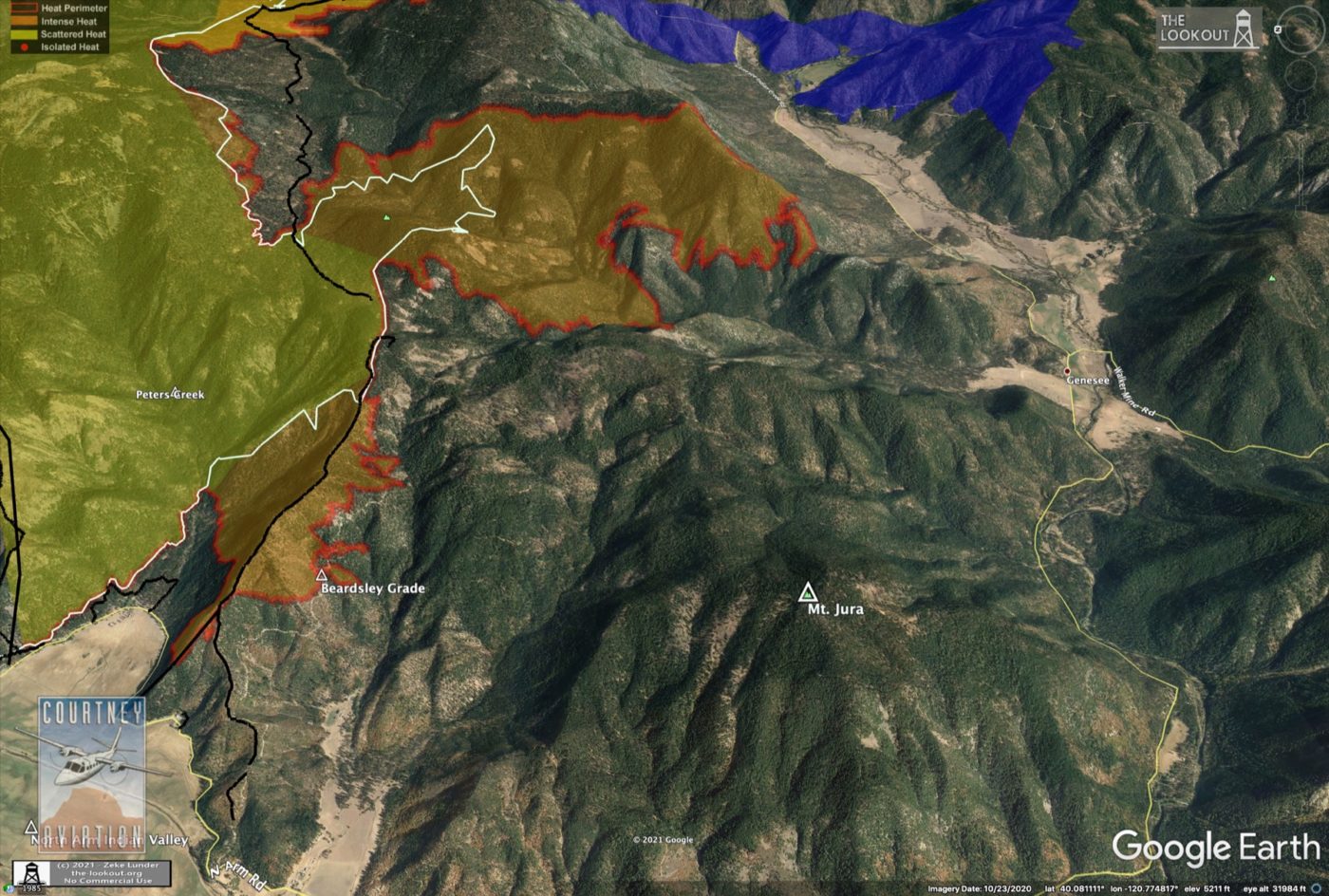 It looks like all of the firing along Highway 36 has held, and much of the interior islands of unburned area have burned together. 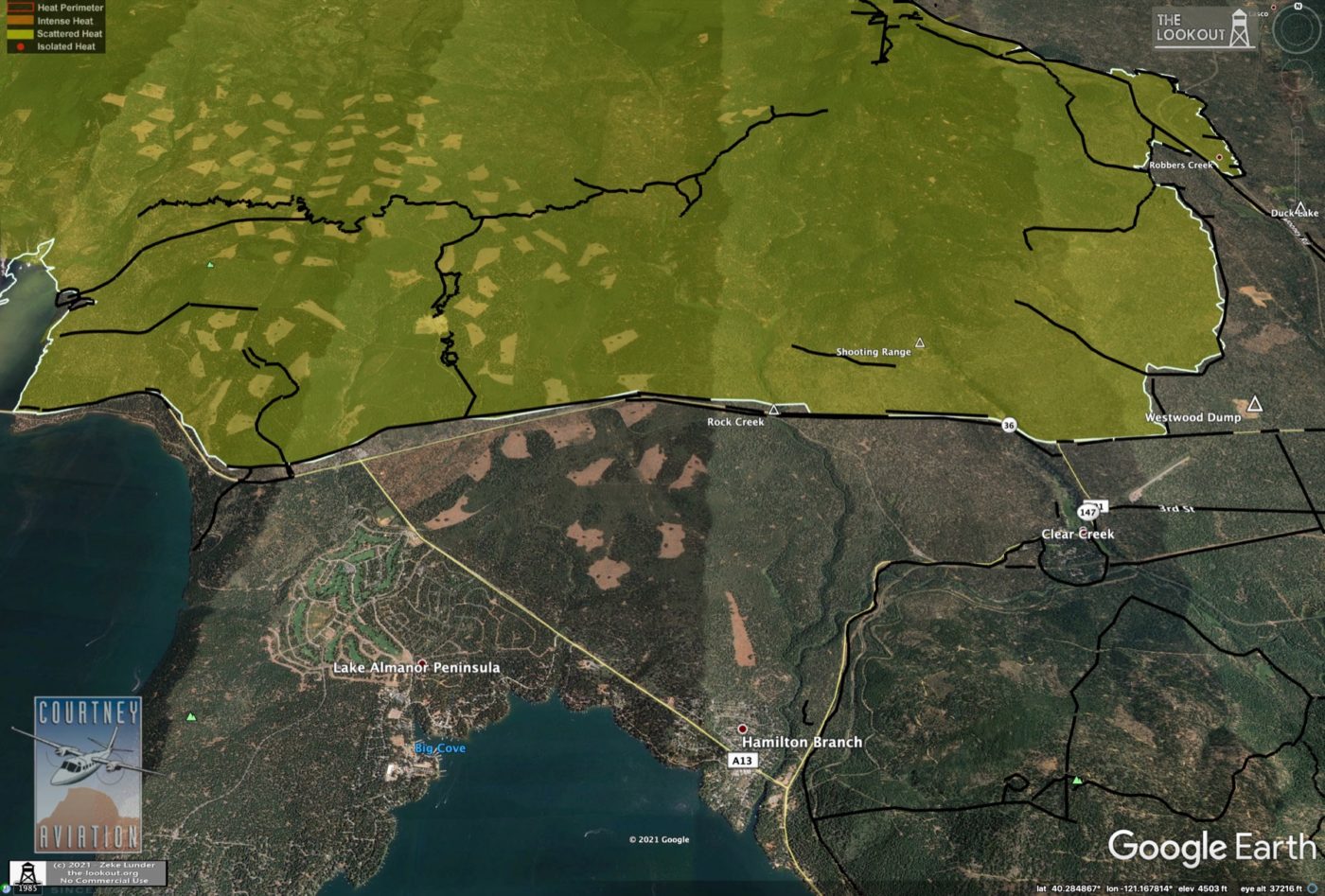 That’s all for now. If I update this post through the day, new material will be at the top.