Lots of wind today, but no huge losses on any of the major lines as of 3pm.

If you are a student of wildfire, this clip will probably give you the chills. Most firefighters have seen the Eagle Fire Burnover video many times in annual refresher trainings. It’s shown to remind us about unique dangers of the Mono winds which occur on the eastern escarpment of the Sierra. The original video was shot within about a mile or two from here, and this is basically a reenactment of that, with newer equipment, and without any career-ending injuries.

Watching this video, I can’t help but think these guys must have had different instructors than mine when they watched the original video. The old smokejumper who ran my class said, “What the f*&k were they thinking trying to hold the fire at Highway 395, when you have a huge desert lake bed a half-mile downwind?” 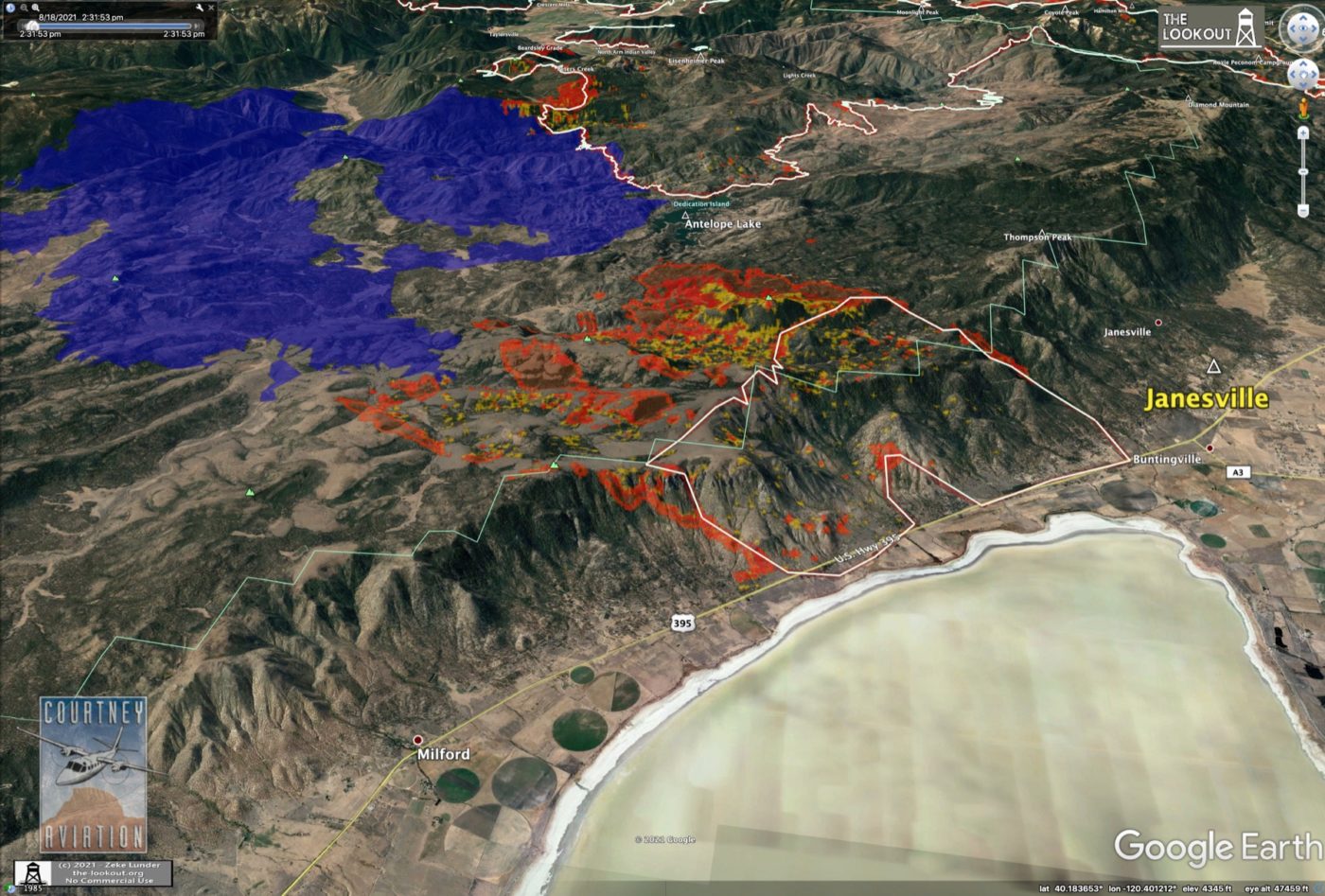 In an earlier image, taken at 2:30pm, firing on the ridge above Beardsley Grade appears to have slopped over to the south side of the ridge. 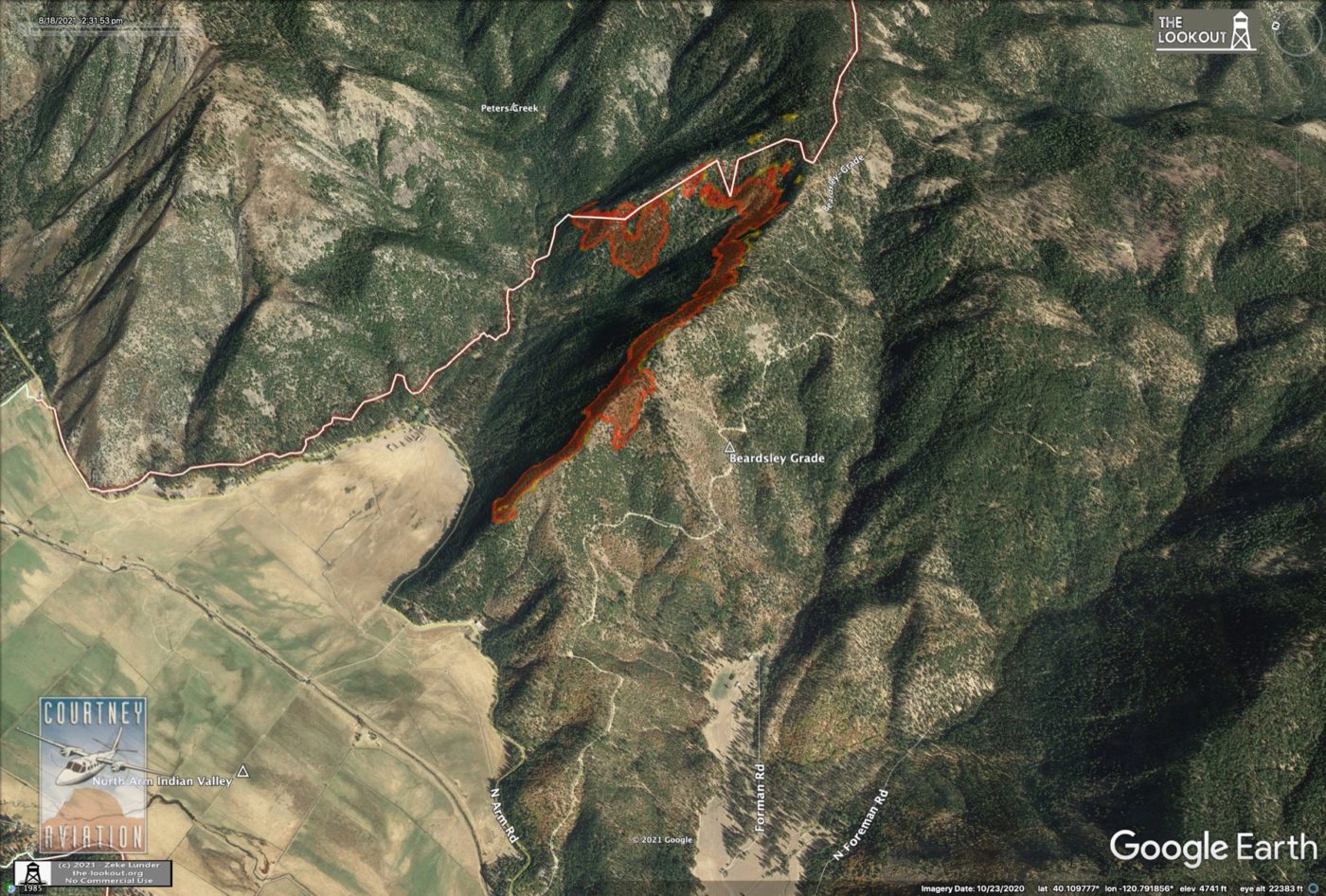 Four hours later, slopovers above the road on the grade are well-established. Further east the fire had run about two miles toward Genesee Valley in 20 hours leading up to 6:30pm. 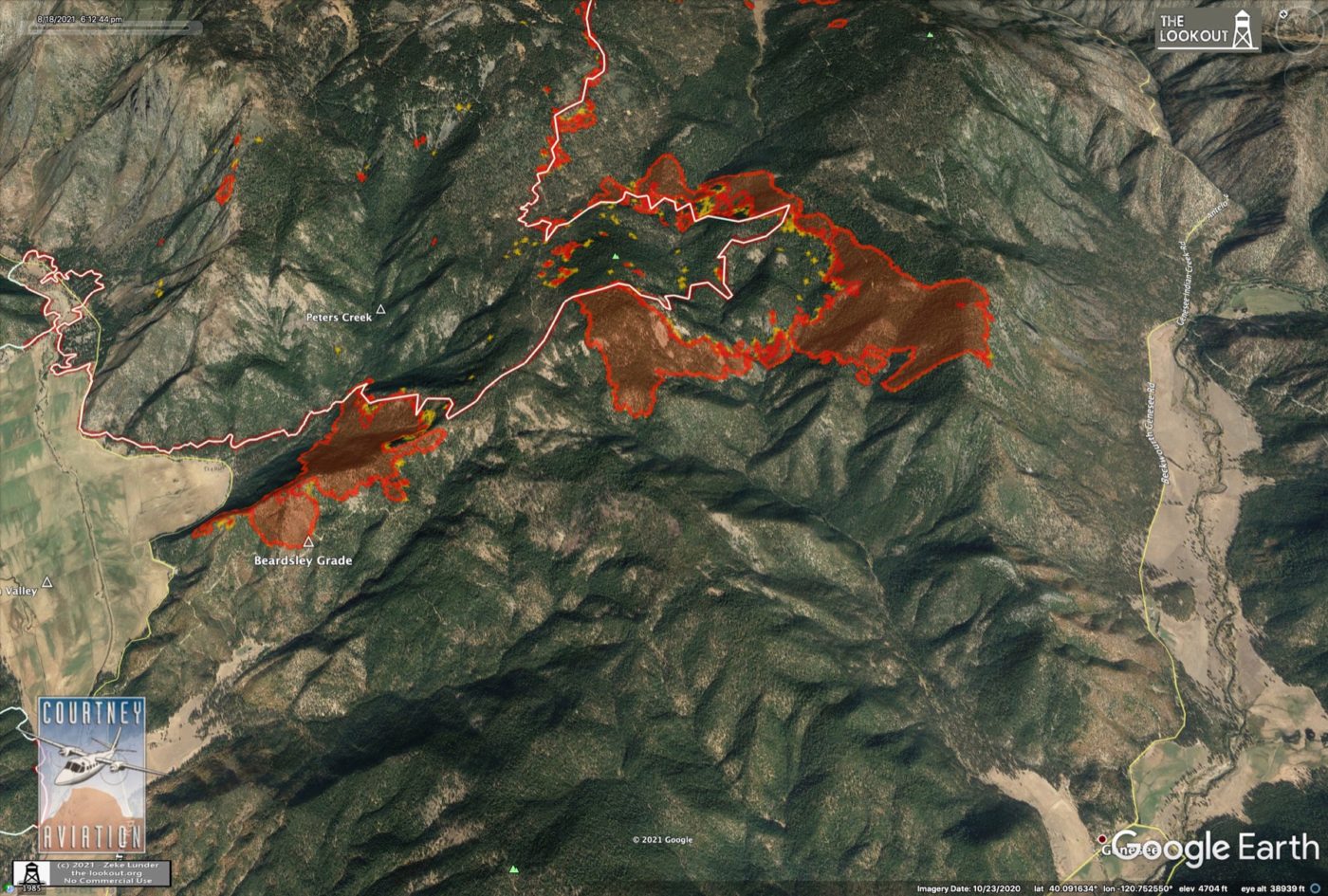 Minimal spread on the head of the fire that was threatening Susanville two nights ago. The fire reversed itself today, running back about 2.5 miles and spotting to the west. 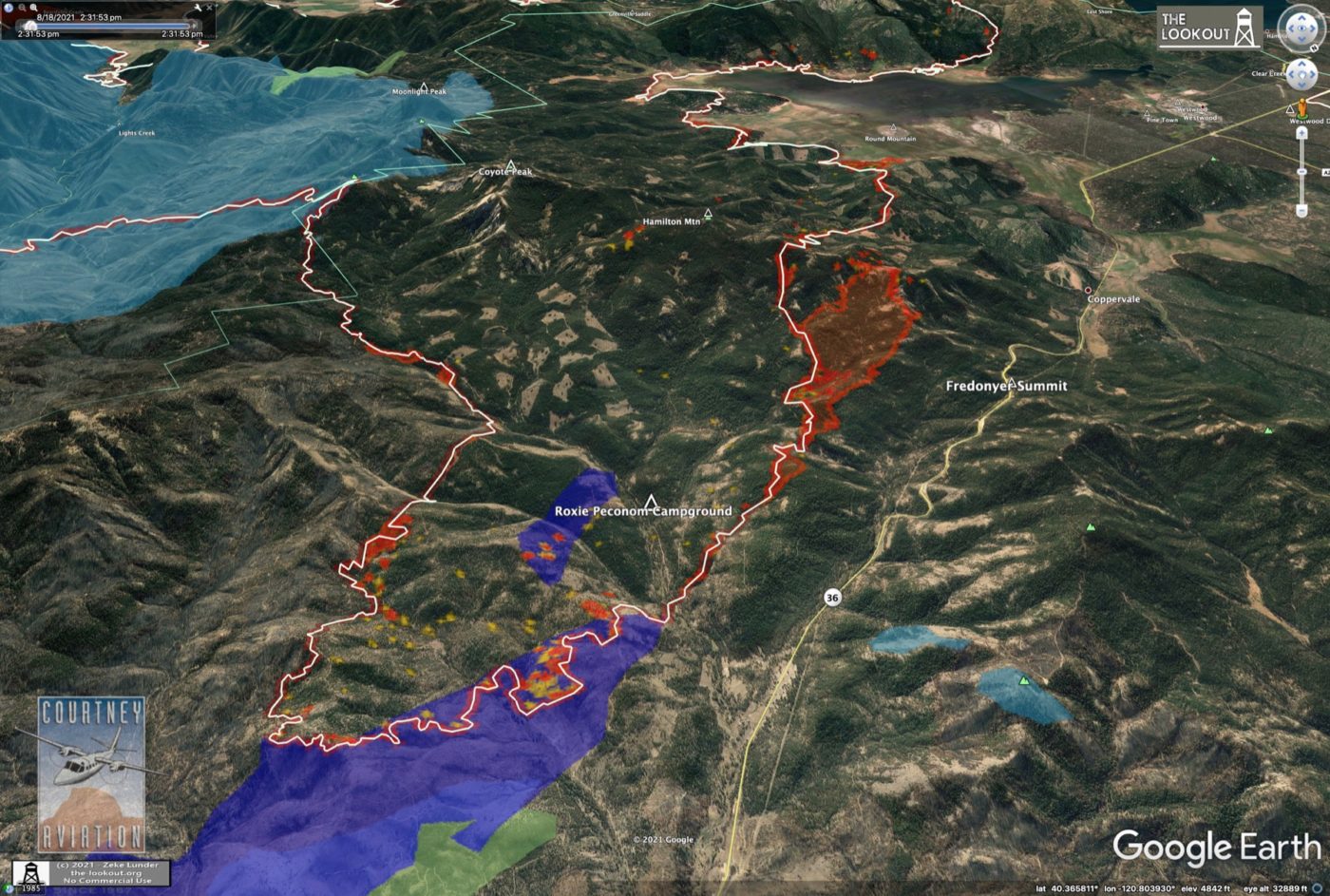 The fire had run downhill to the Mountain Meadows and was actively flanking to the northwest at 6pm, visible on Dyer Mtn webcams. 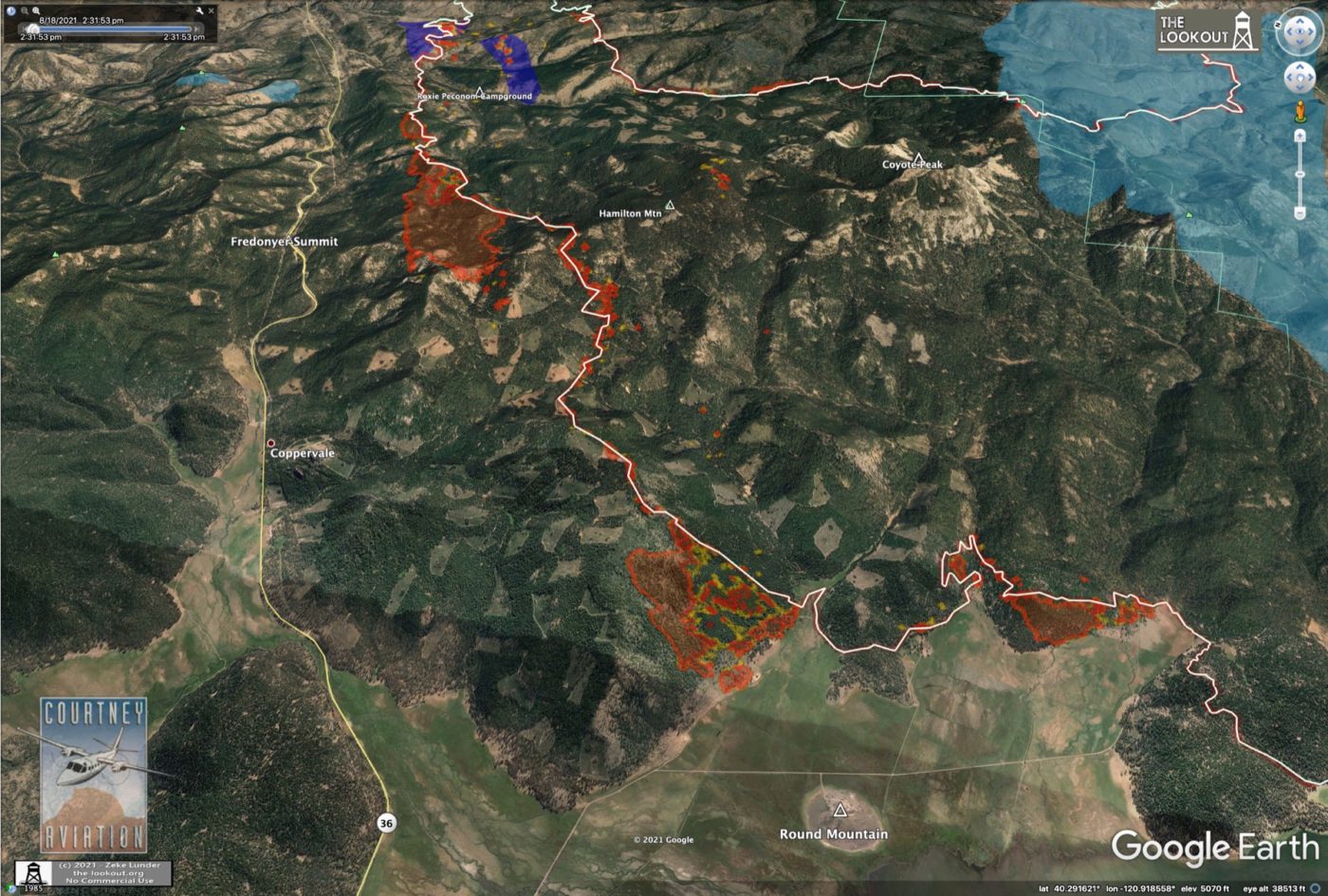 There is no major heat showing on the IR flight along Highway 36 for Westwood or Chester. Great news there. The Lassen County Sheriff’s Office was going to allow repopulation of Westwood today, but decided to hold off due to the intensity of the fire still burning on Fredonyer Peak.

The last main area of interest to cover tonight is the area around Highlands Resort in Childs Meadows. The fire has crossed the meadow here and is burning in heavy timber, adjacent to the 2020 Stump Fire. I was surprised this area really didn’t move out on us today, as there were sustained northeast winds pushing across this landscape all day. Hopefully we can make a stop here. The alternative — fire running south into the wild canyons of Mill Creek — is not good at all. If that happens we could end up fighting the fire at Los Molinos on Highway 99. 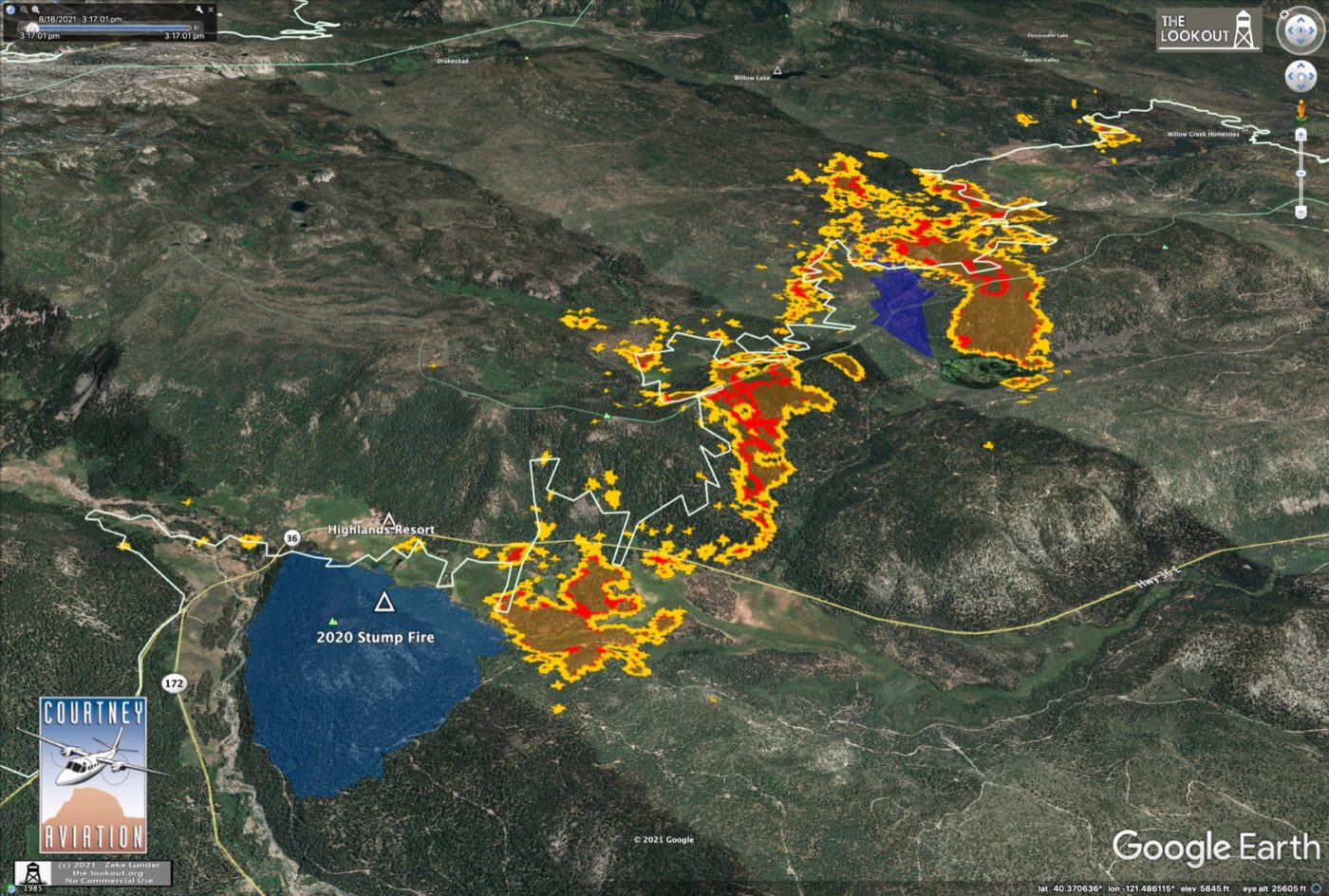 The fire at Highlands is well-established. You can see just how wild the land is to the southwest here in image below. Mill Creek Canyon is steep and inaccessible, and has some of the wildest, largest old growth forests remaining in Northeastern California. This canyon needs fire, and has been one of the places I really hope to see burned with a large prescribed fire in my lifetime. Right now is probably about the worst time for it to get fire. The worst news about fire getting into this landscape is that the rim between Deer and Mill Creeks is some of the only land managed by Collins Pine in this area that hasn’t yet been burned by the Dixie Fire.

The area in the right foreground has rhyolite geology. This is a lot like decomposed granite. It is very erodible, and provides a harsh growing site for trees. Because of this, there is more spacing between trees in general, according to my good pal Jake, who was a forester here. He hopes the less-dense stands might fare better during a fire. I believe there are old contingency dozer lines in this area from the Stump Fire last year. Maybe we can use those now? Stay tuned. 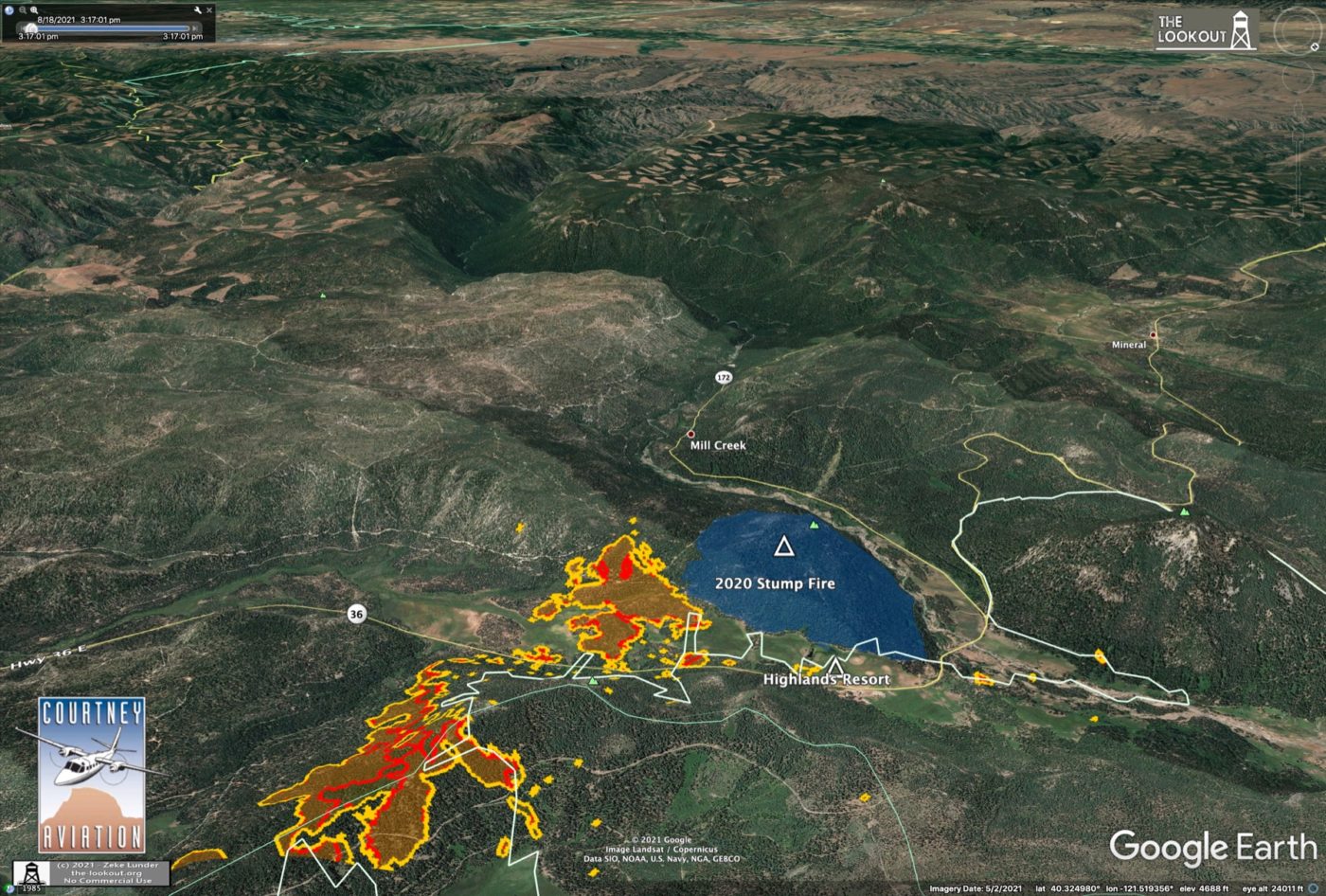 Probably more to say about all of this and I’ll see what other info comes in later this evening. I’ve also spent some time following the Caldor Fire in El Dorado County, which has the potential to be a massive WUI disaster along the the Highway 50 corridor. This area is the most densely populated wildland urban interface in the entire Sierra Nevada, and they are forecast for big downslope winds overnight.

If you’re not following me on Twitter, please consider doing it. Twitter is a good platform for fire intel, and it’s hard for me to update several different locations when I am following breaking events, so I am most likely to put things up there first. www.twitter.com/wildland_zko

If you are working on a fire and see us posting information that is inaccurate, please shoot me an email if you can. I am basing most of my interp off of IR imagery and pieces of intel from all over. We really want to get the story right.