A huge run on the southeast side of the Dixie Fire today, a smaller run north of Silver Lake, and some activity in Genesee Valley.

This post is about events that didn’t go the way firefighters wanted them to over past couple days. The intention here isn’t to trash firefighters who are trying to do the impossible because they think that’s what we expect of them. Rather, I am reporting the facts as I see them unfolding. If anyone would like to offer up more informatio or a counterpoint, I will publish it here. (Contact me at [email protected].)

It was very smokey in Chico today, but even with poor visibility I could see a huge header popping up out to the east. The fire that has been burning on north side of Grizzly Ridge north of Greenhorn Ranch ran 11 miles to the east today under southeast winds, growing the fire 30,000 acres.

Questioning firefighting tactics is taboo. As a reporter here, it doesn’t seem unreasonable to ask how firing operations along dozer lines on Grizzly Ridge affected today’s massive run and how much it would have moved on its own without the added help. The maps below aim to help figure out the story here. They illustrate this part of the fire at 8pm on August 29, 11:30am on August 30, and 7:18pm on August 30.

There were 1.5 miles of firing on last night’s imagery (8pm on August 29) and the total heel of the area that burned today was about four miles, so if crews continued firing until 7am, as was stated in the East Zone briefing tonight, I’m curious how far last night’s firing carried to the southeast on dozer lines atop Grizzly Ridge before crews stopped lighting.

IR captured at 1:30am on August 30 (light-blue line) shows the southern body of the main fire not really spreading very far from where it was the night before, but the area along the fired dozer line has run hard back toward the main fire. This view looks west. 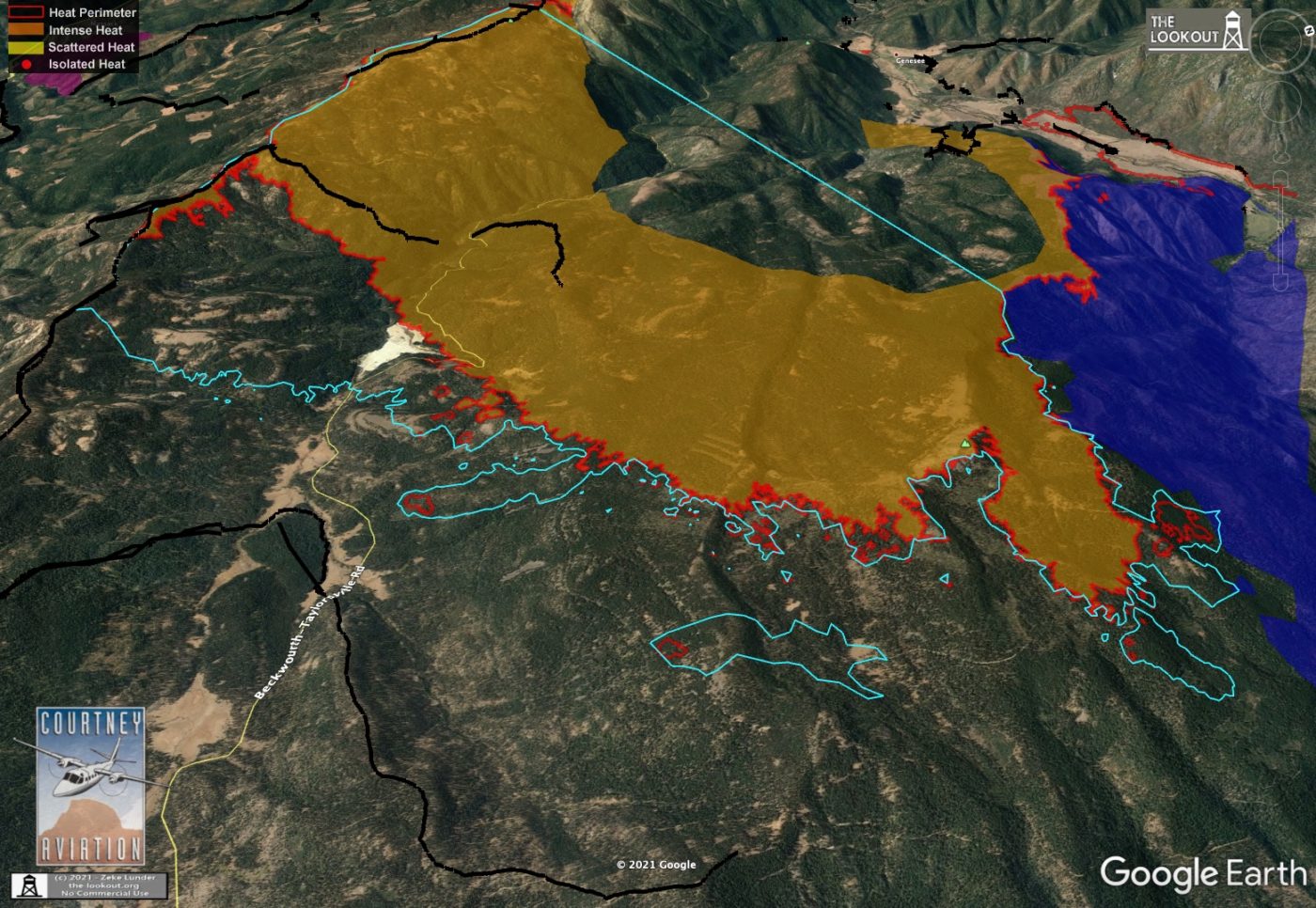 By 7:18pm the rest of the ridgeline has all burned,and fire has moved out hard to the east. 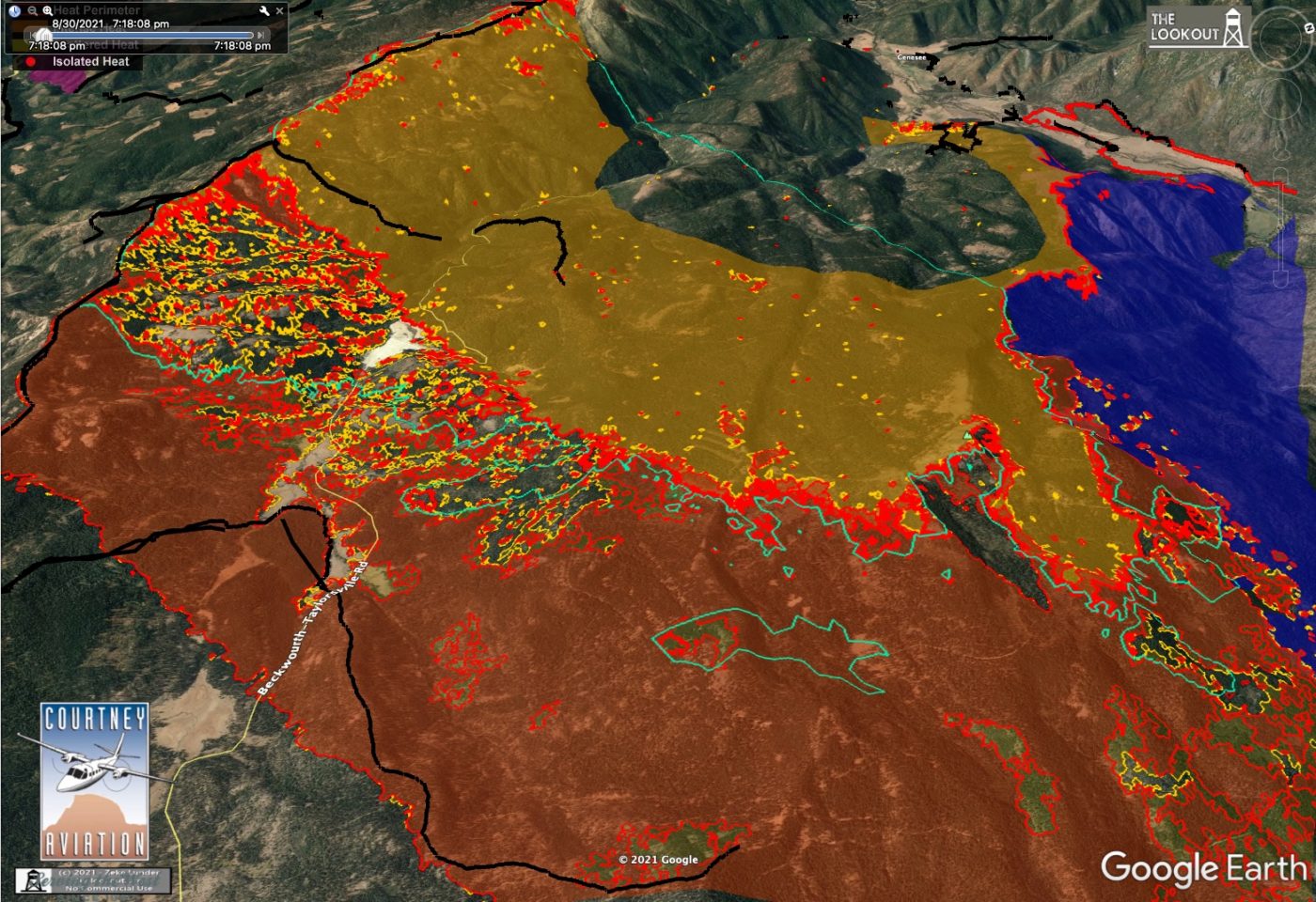 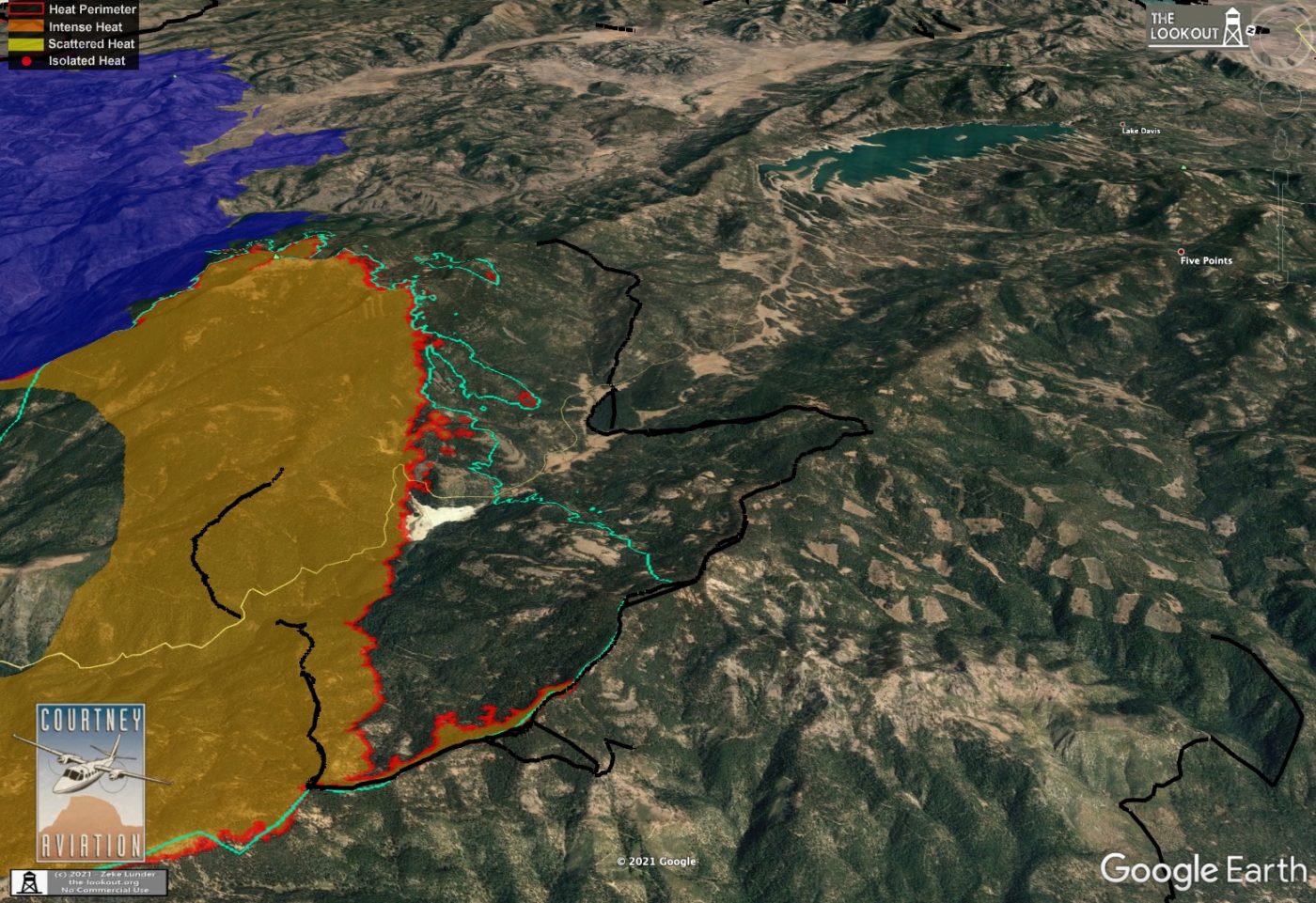 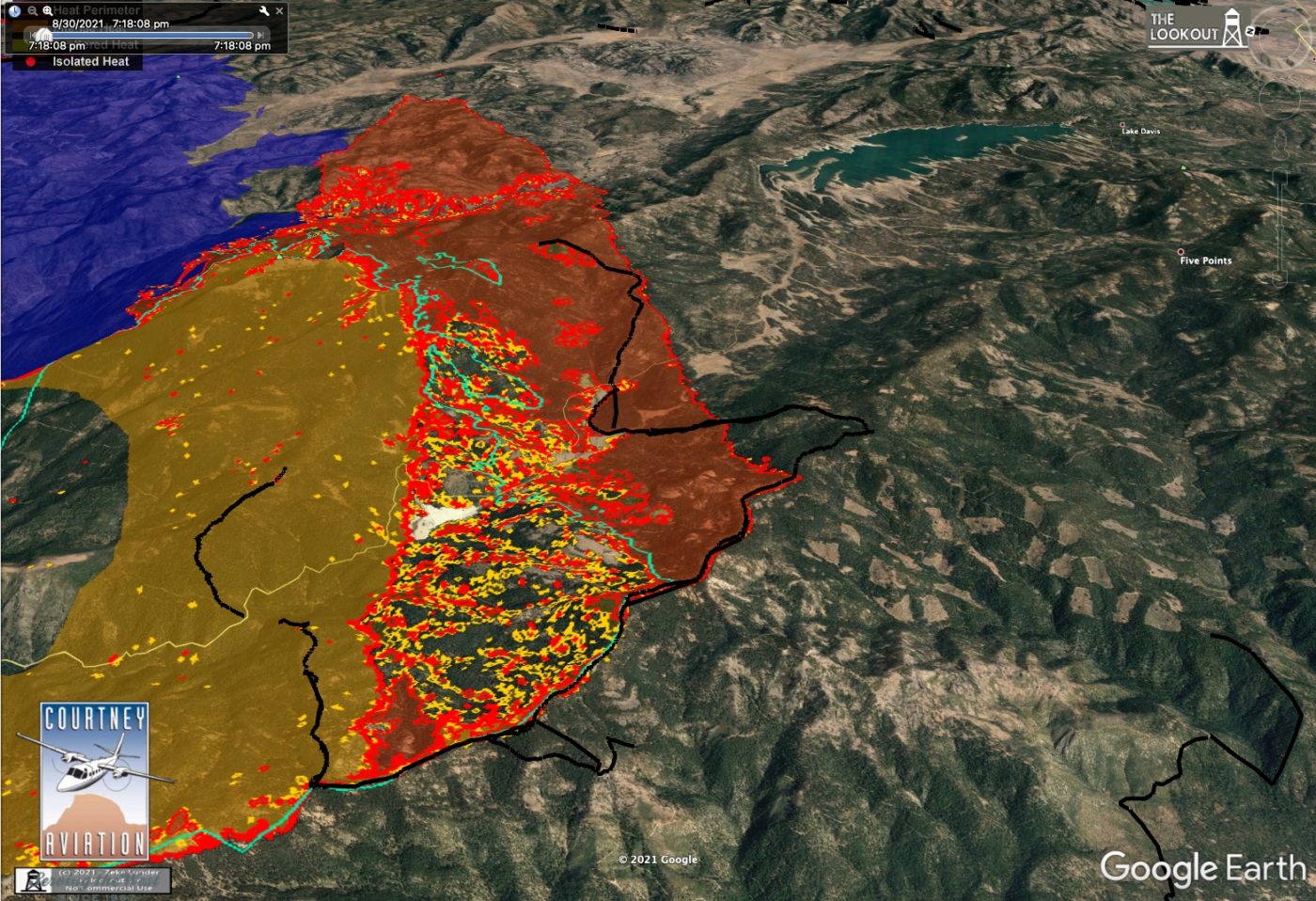 Elsewhere, another Dixie firing operation escaped control yesterday and it also kicked some ass today. This one is on the ’10 Road,’ north of Silver Lake, just outside of Caribou Wilderness. Firing started to run away at about 2pm on August 29 and by 8pm slopover had spread 1.25 miles (about 700 acres). Today’s winds blew the escaped fire about 2.5 miles east, with a spot fire a mile beyond that.

Many firefighting resources have been stripped from the Dixie Fire to go save South Lake Tahoe. It remains to be seen if we’ll have the resources we need to catch this new run before forecasted winds take it halfway to Eagle Lake. Heavy airtankers will be prioritized for the potential urban interface disaster at Tahoe well before they come up to Lassen County to save some timber and brush.

Inside Caribou Wilderness, the interior fire made a run at the compromised line on the ’10 Road’ late in the day on August 30. This run from the interior shows why firefighters were desperate to light off the ’10 Road’ ahead of the forecast winds. The whole episode highlights the impossible/Hail Mary kinds of efforts firefighters are being forced to attempt, trying to contain a fire that isn’t really stoppable. I think one of the important questions we can ask ourselves is how much abuse our firefighters can take? How far are we willing to go before admitting that the fire is beyond our control?

Last but not least, some heat and firefighting in Genesee this evening. No real info, just this heat map. 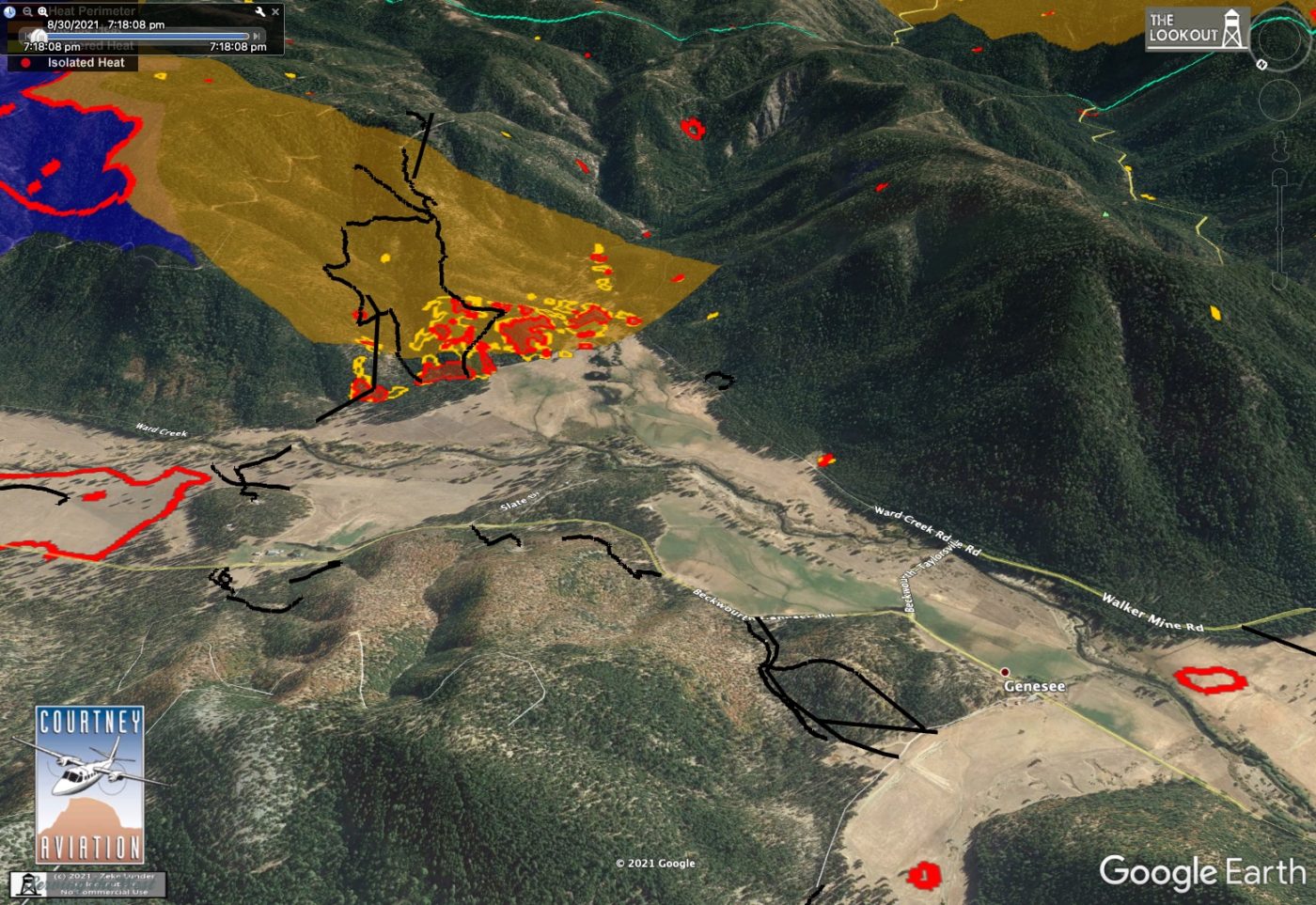 That’s all for now. Good night.

The fire spread actively to the southeast near Walker Mine, north of Greenhorn Ranch. Fire spread about 1.5 miles in 20 hours. There were firing operations off of the dozer lines above Greenhorn Ranch at the time of mapping, about 9:15pm on August 29. Dozer lines are shown in black, but may not be up to date — the incident management team has not uploaded new dozer line maps to the public server in last two days. Elsewhere, a firing operation north of Silver Lake, about 15 north of Westwood, spotted over bulldozer lines yesterday afternoon and has spread 700 acres to the east, north of Silver Lake Road, toward County Road A-21. 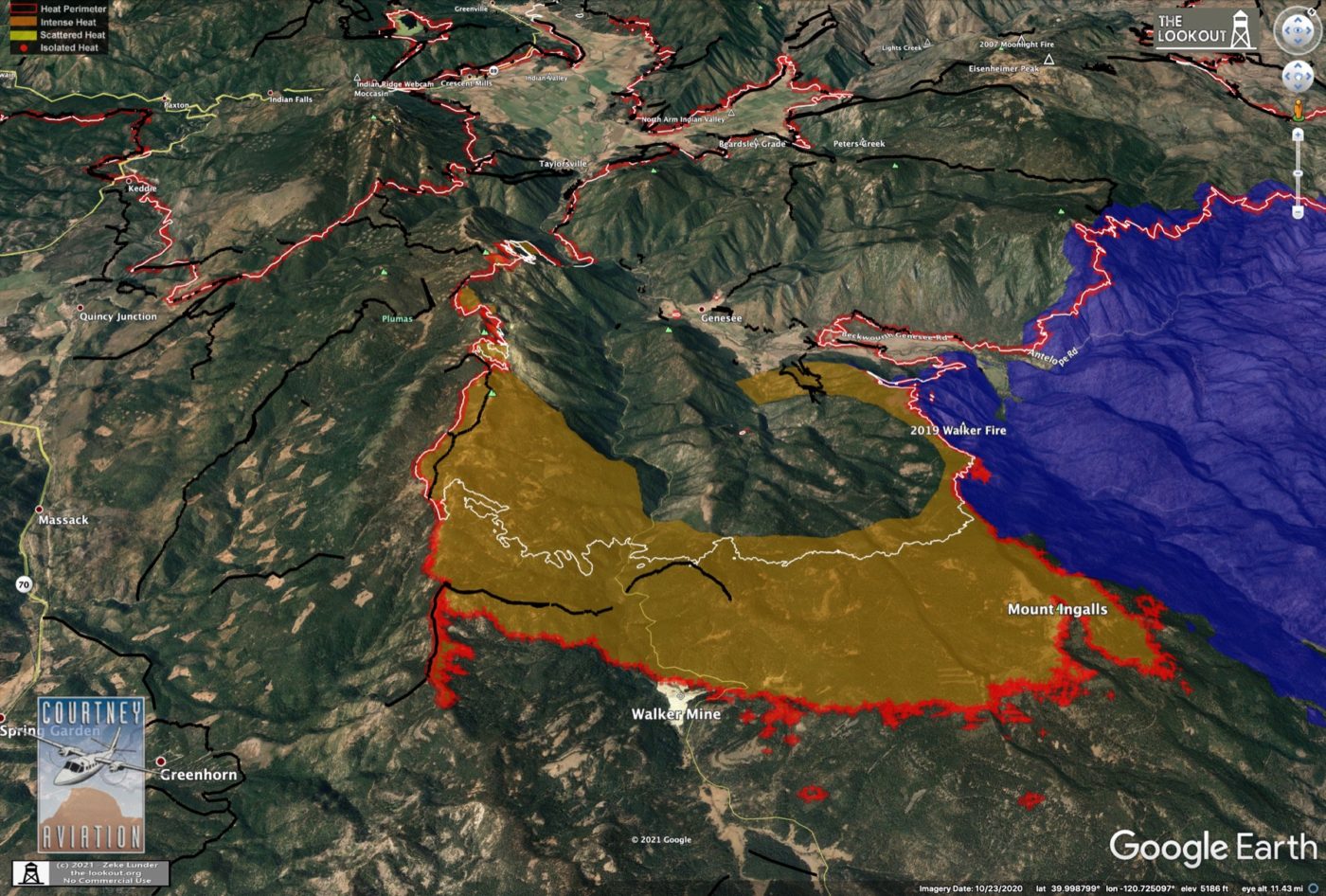 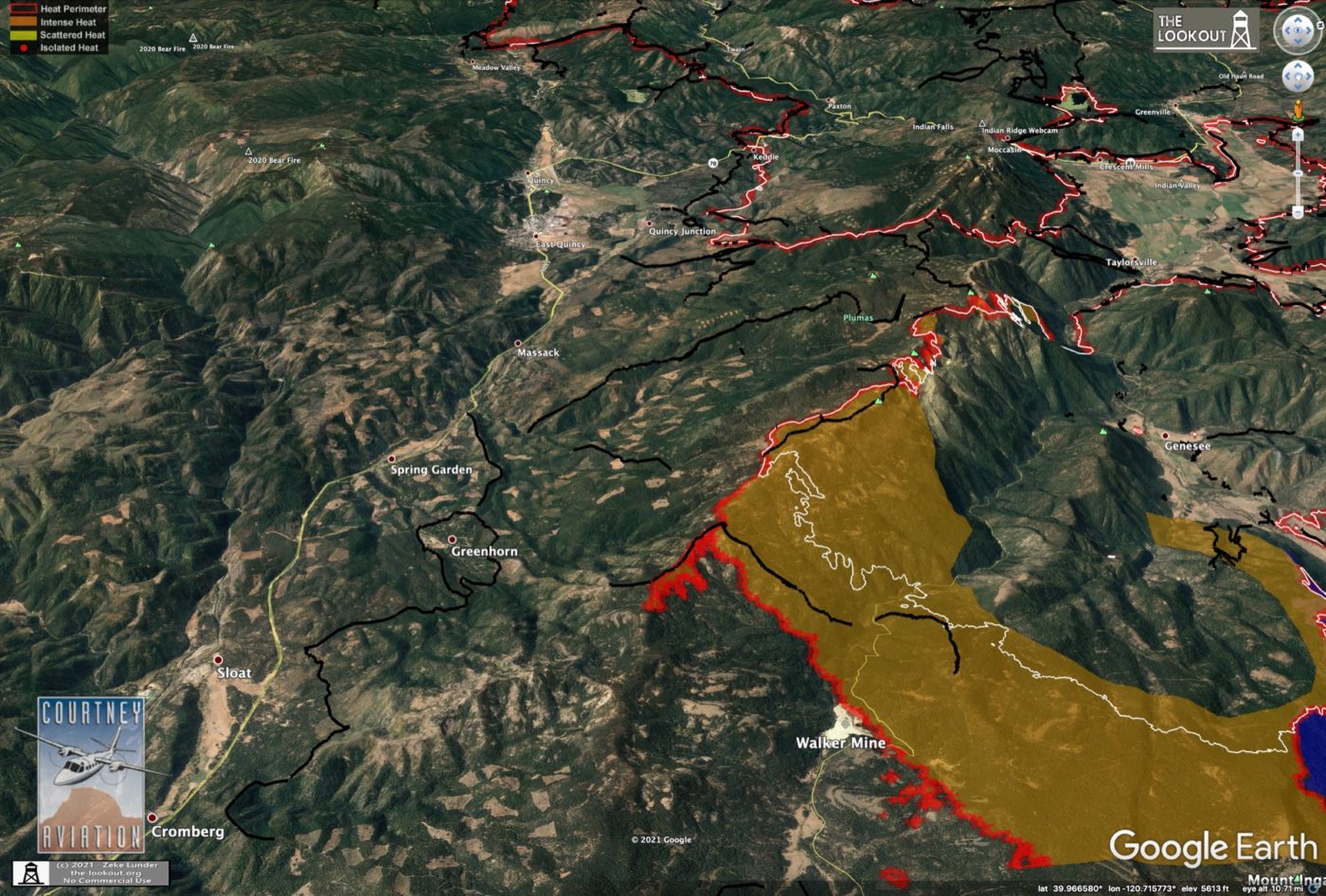 There is a new slopover on a section of the fire that has been pretty quiet for past two weeks. This is north of Silver Lake, where it appears a firing operation on the ’10 Road’ got away from them yesterday afternoon. 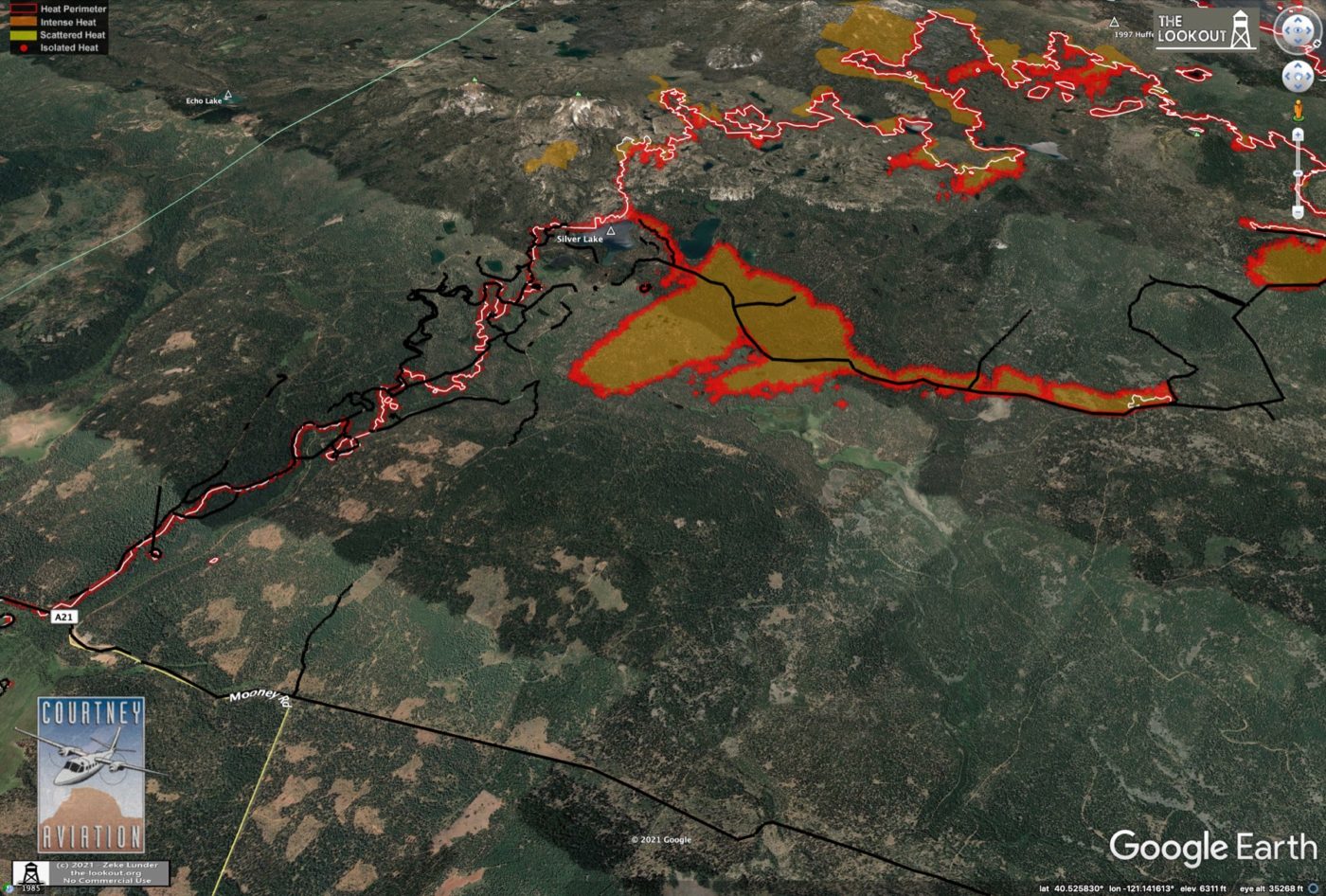 Here is mapping from yesterday at 2:21pm showing the firing operation taking place, on the ’10 Road,’ headed north from Silver Lake. 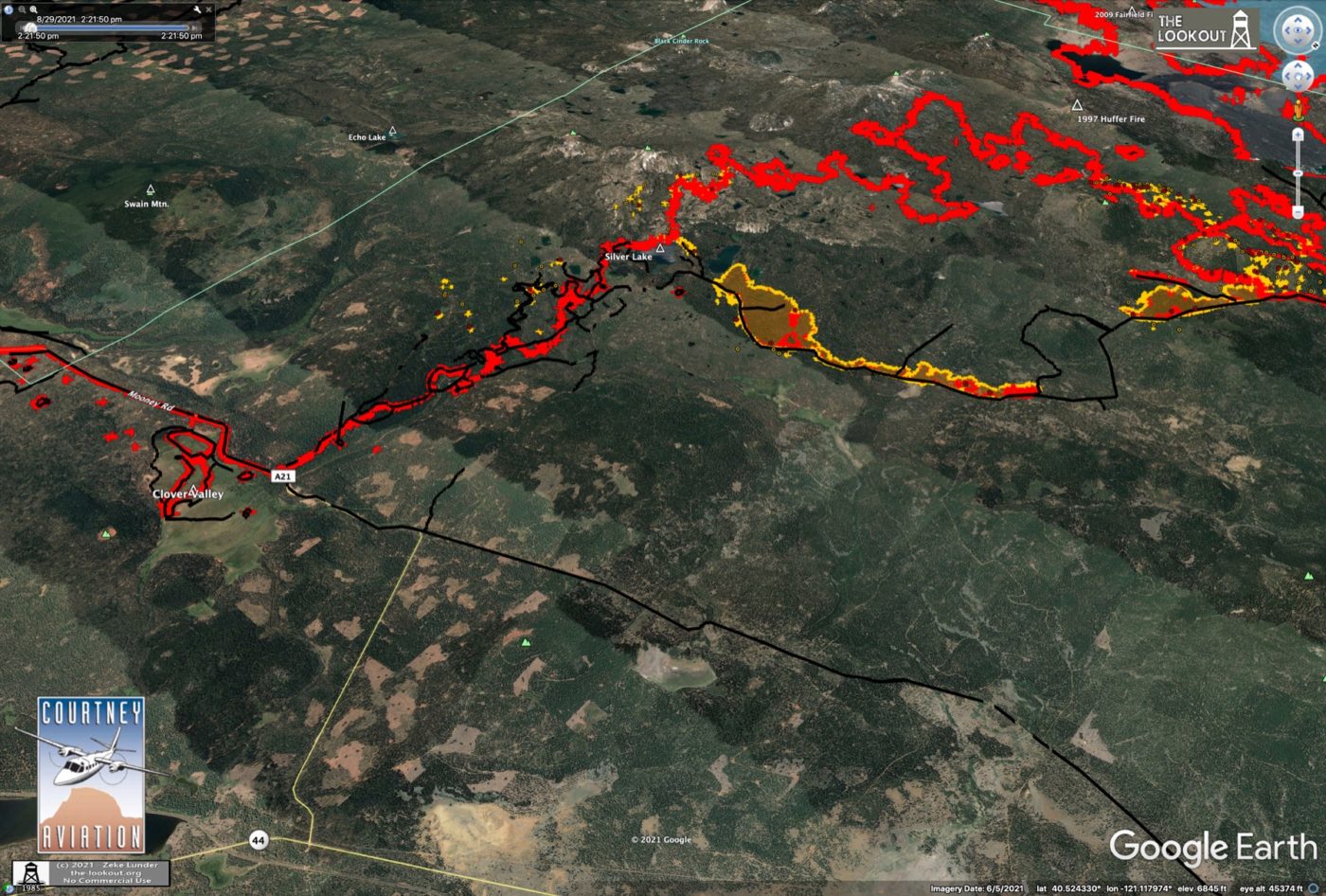 By 9:21pm, the firing operation had crossed the road and added several hundred acres to the northeast flank of the fire. This new fire growth is not in a great spot considering the upcoming forecast southwest wind event. 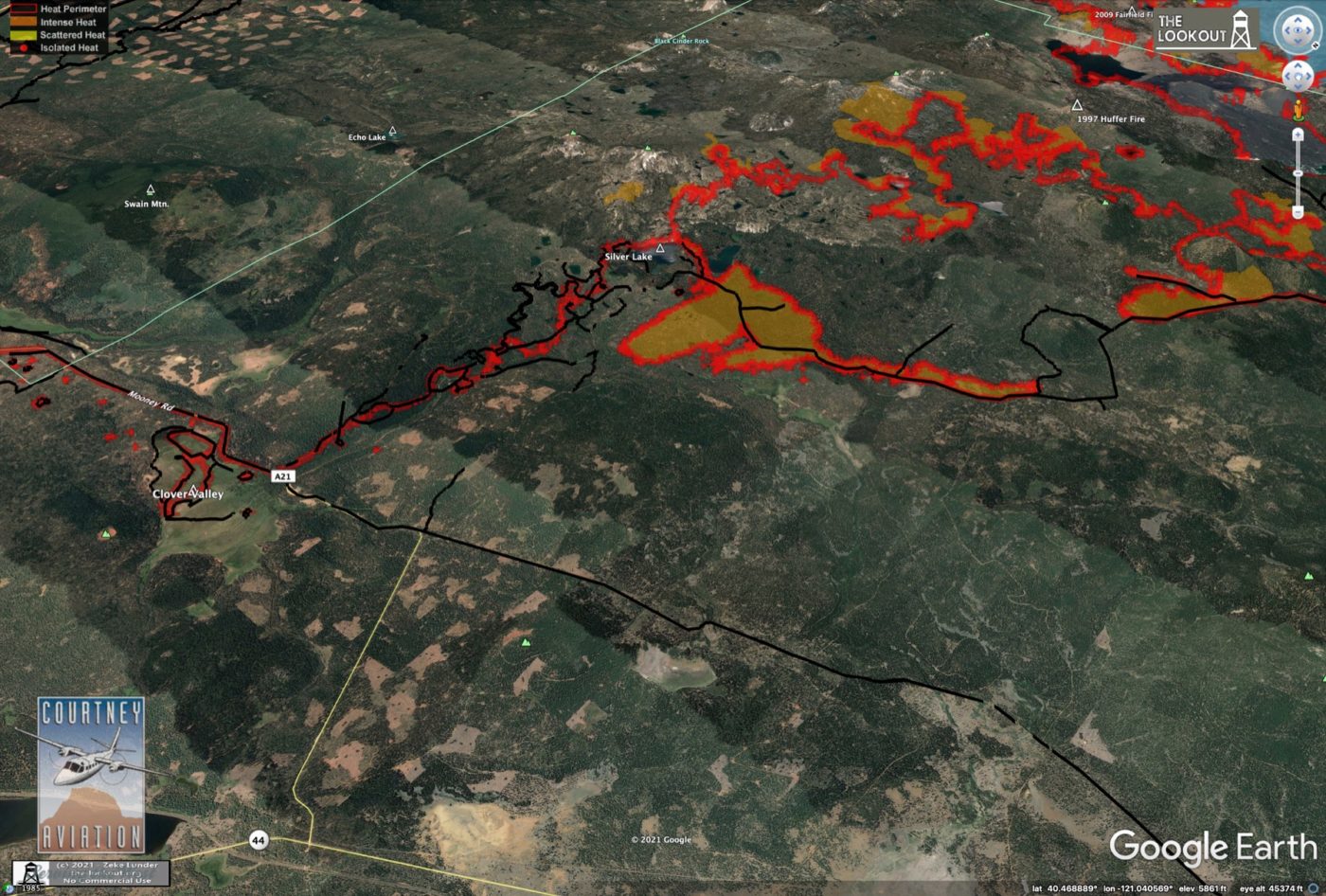 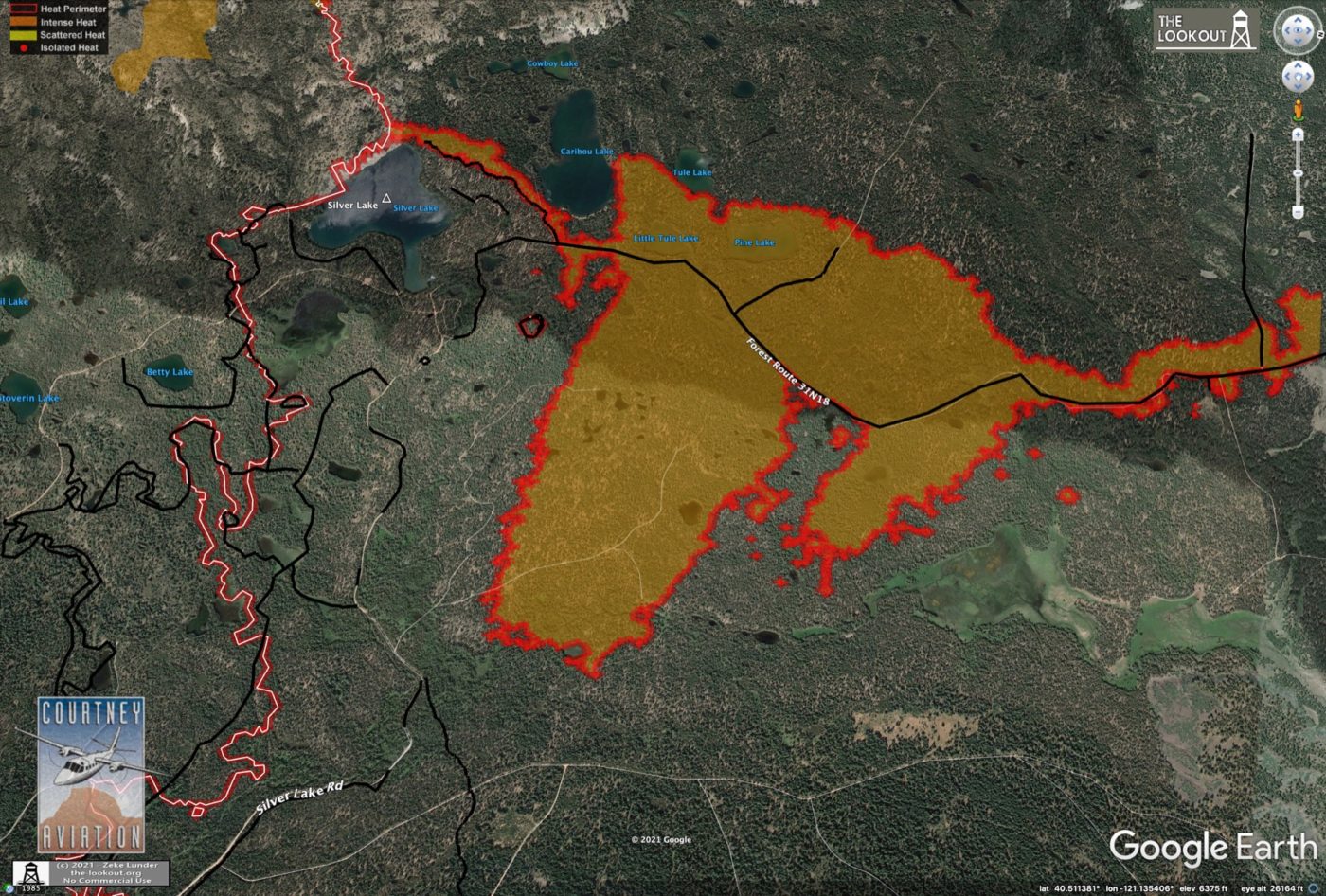 Elsewhere on the northern flank, no new spread on last week’s escaped firing operation north of Butte Lake, and some new growth on firing ops on the northern edge of the 2012 Reading Fire, which has not really been supporting any major fire growth on its southern boundary. 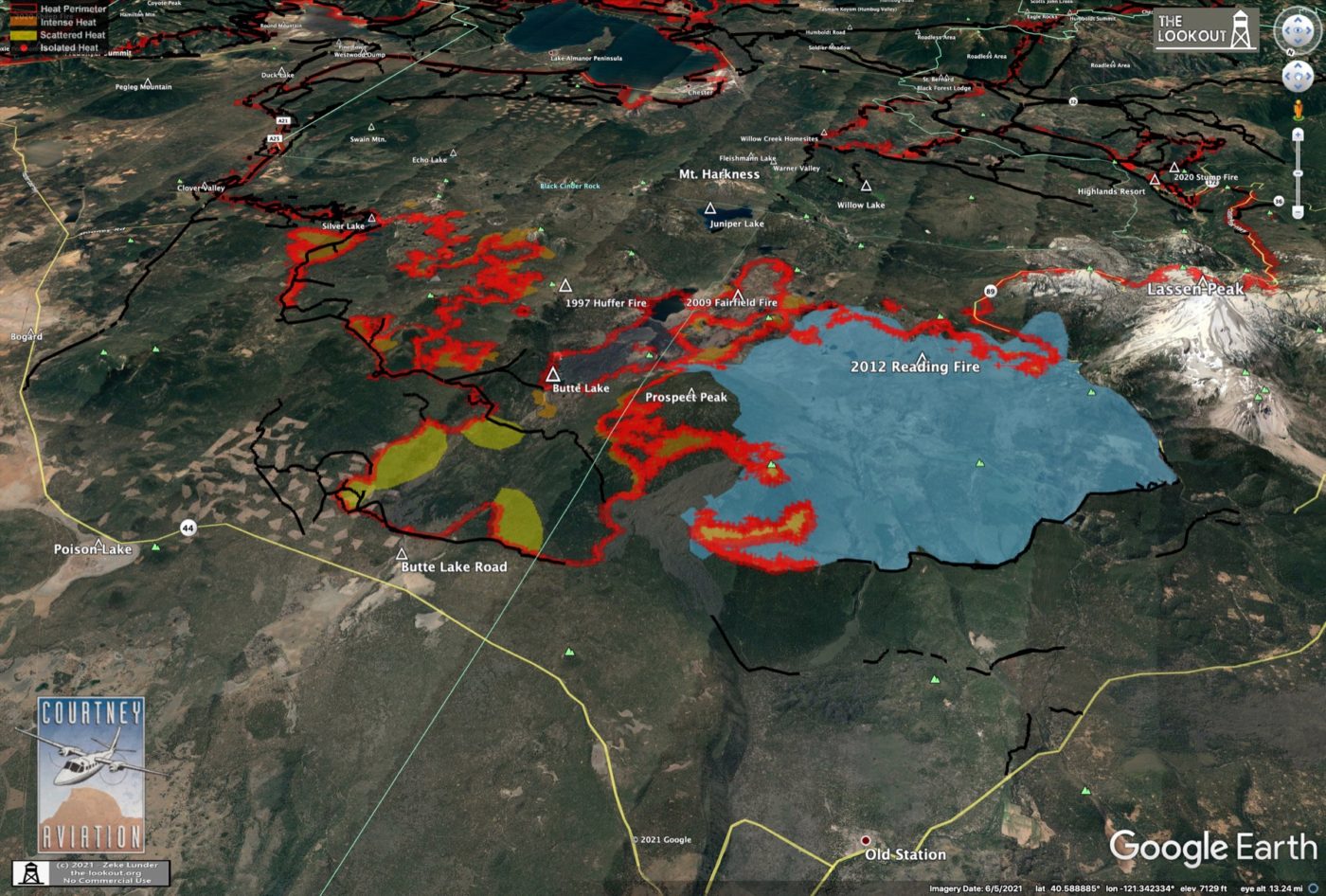 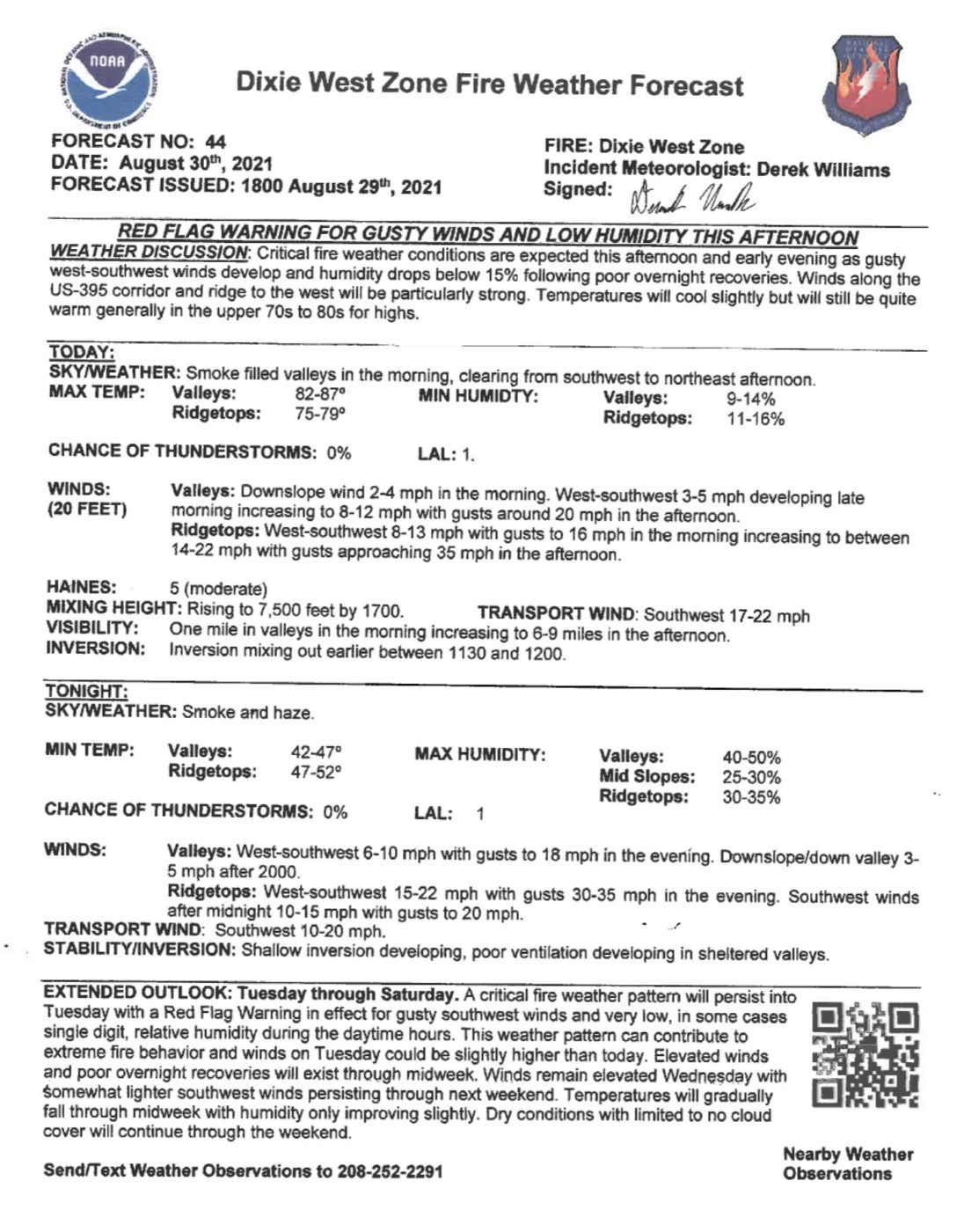 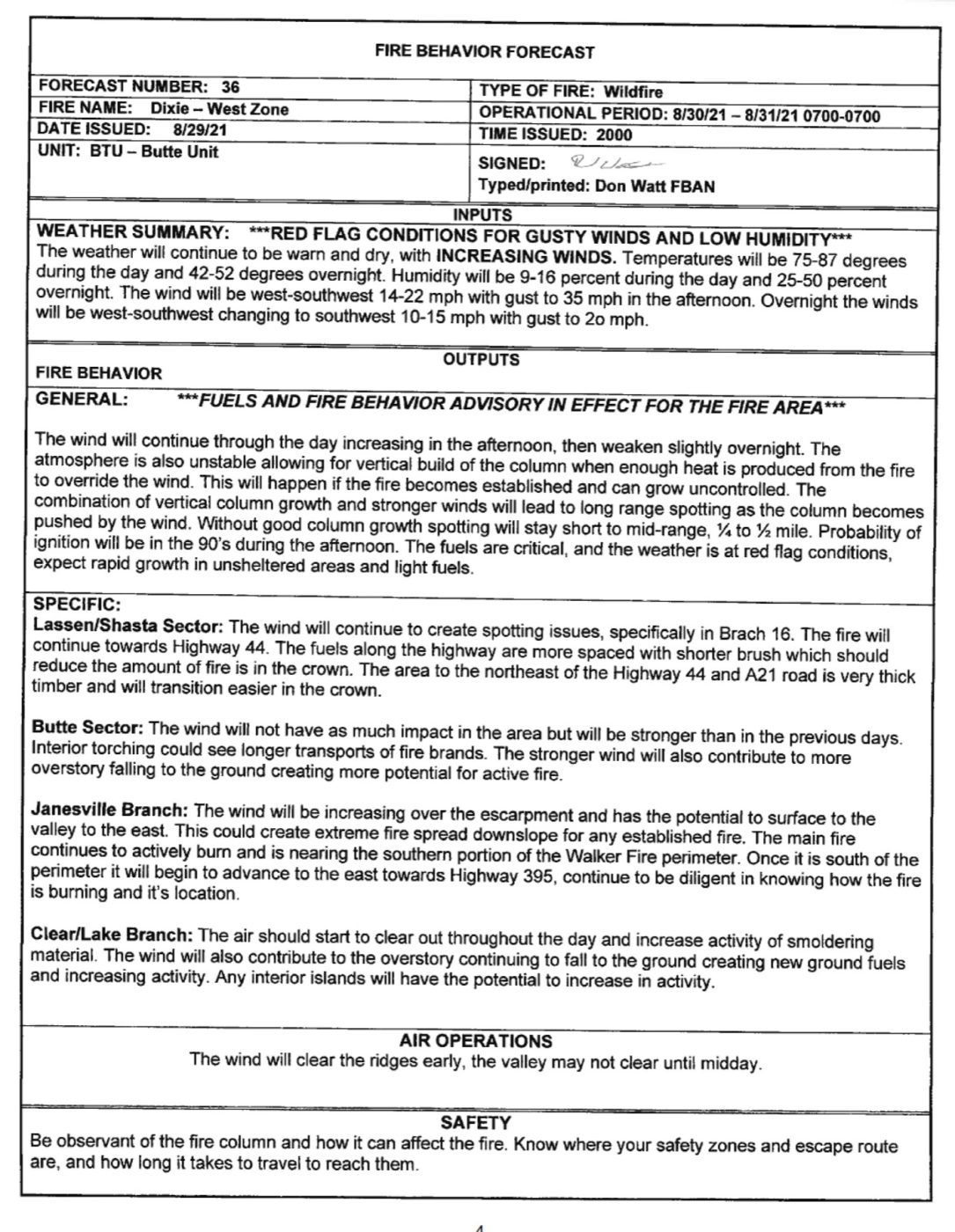 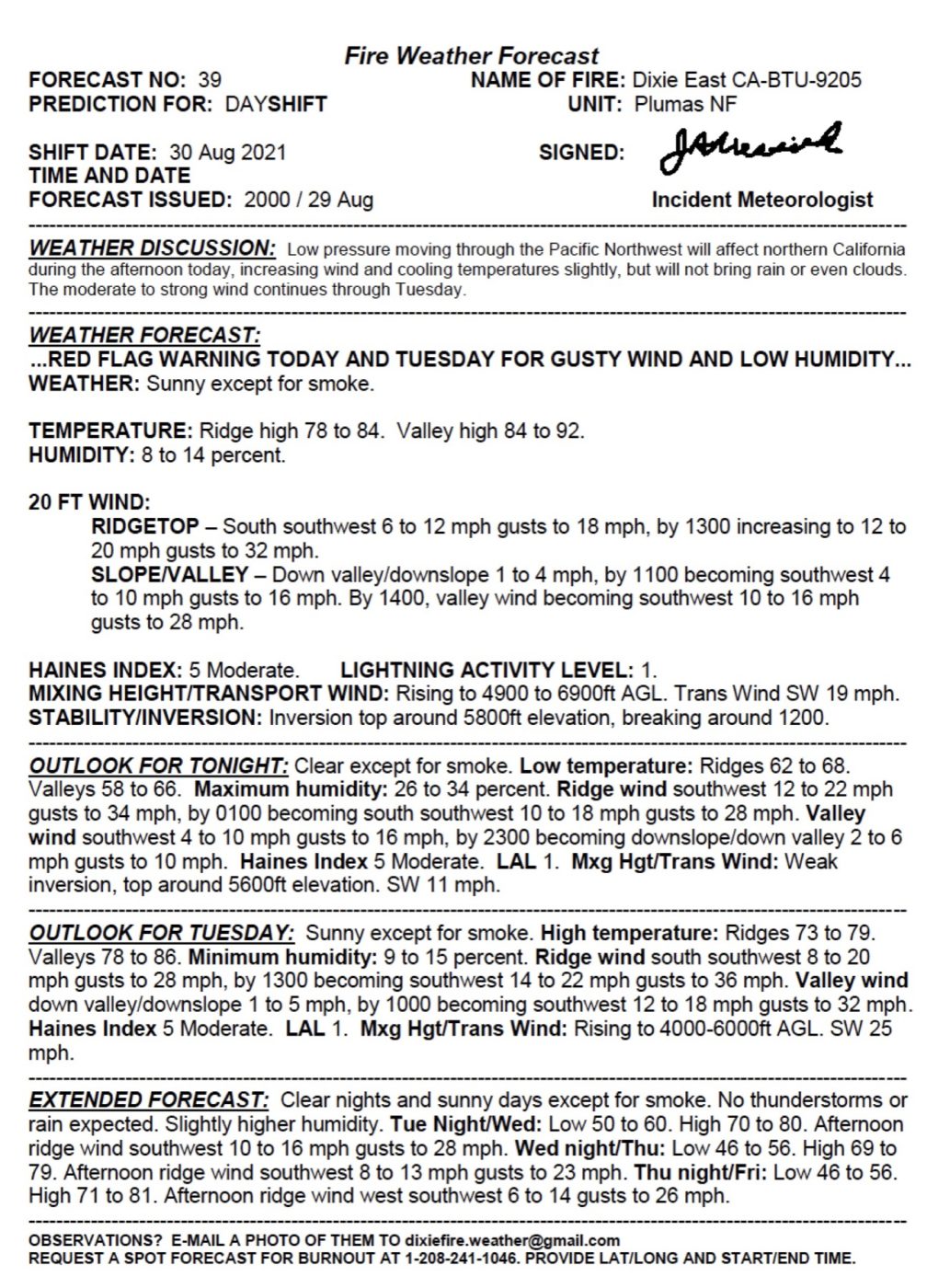 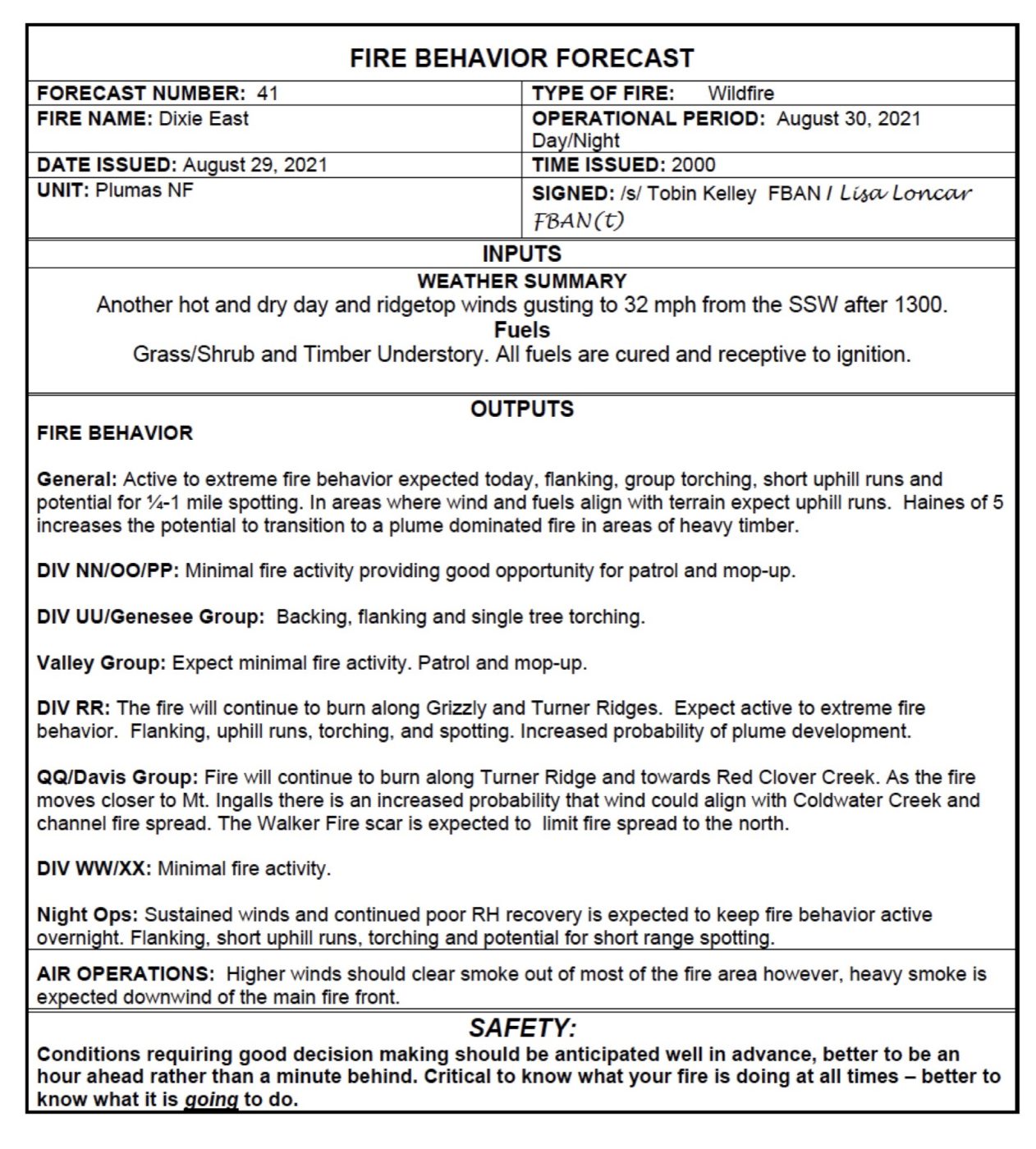