Good morning. If you are evacuated from the Caldor or any other fire, I hope good information can bring you some calm.

The fire spread actively yesterday, cascading down off Echo Summit into a large expanse of the west side of Christmas Valley. Around 5pm, a spot fire started on the east side of Highway 89 and started burning up into the Carson Range Mountains. Between 5pm and 5am, this part of the fire spread about 3/4 mile to the northeast through the forest, roughly parallel to Pioneer Trail and skirting the neighborhoods.

Though the majority of homes in the valley have so far been spared, today promises to be a tough day of firefighting. There is fire all over the edges of the community and not enough fire engines for every house, so crews are going to be extremely challenged to keep things out of town.

Here are maps from around 5am today. Precise time of capture in upper-right.

Overview of fire in Meyers area. Overnight spread spared the communities, burning mainly through forests on the edges of neighborhoods. 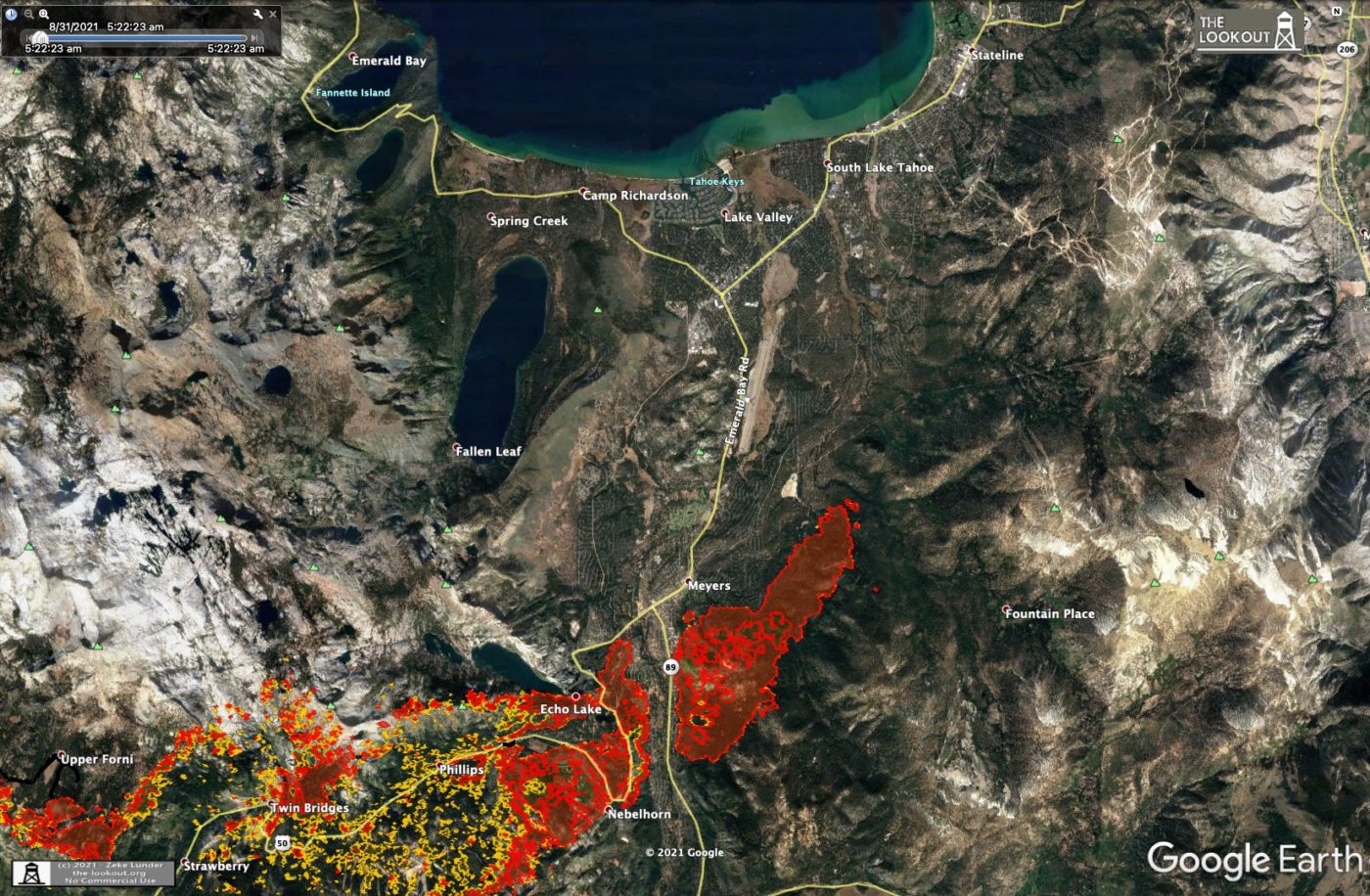 View south over Meyers. Fire and spots at the intersection of North Upper Truckee and Highway 50 are a critical concern as this area is upwind of densely-populated areas. 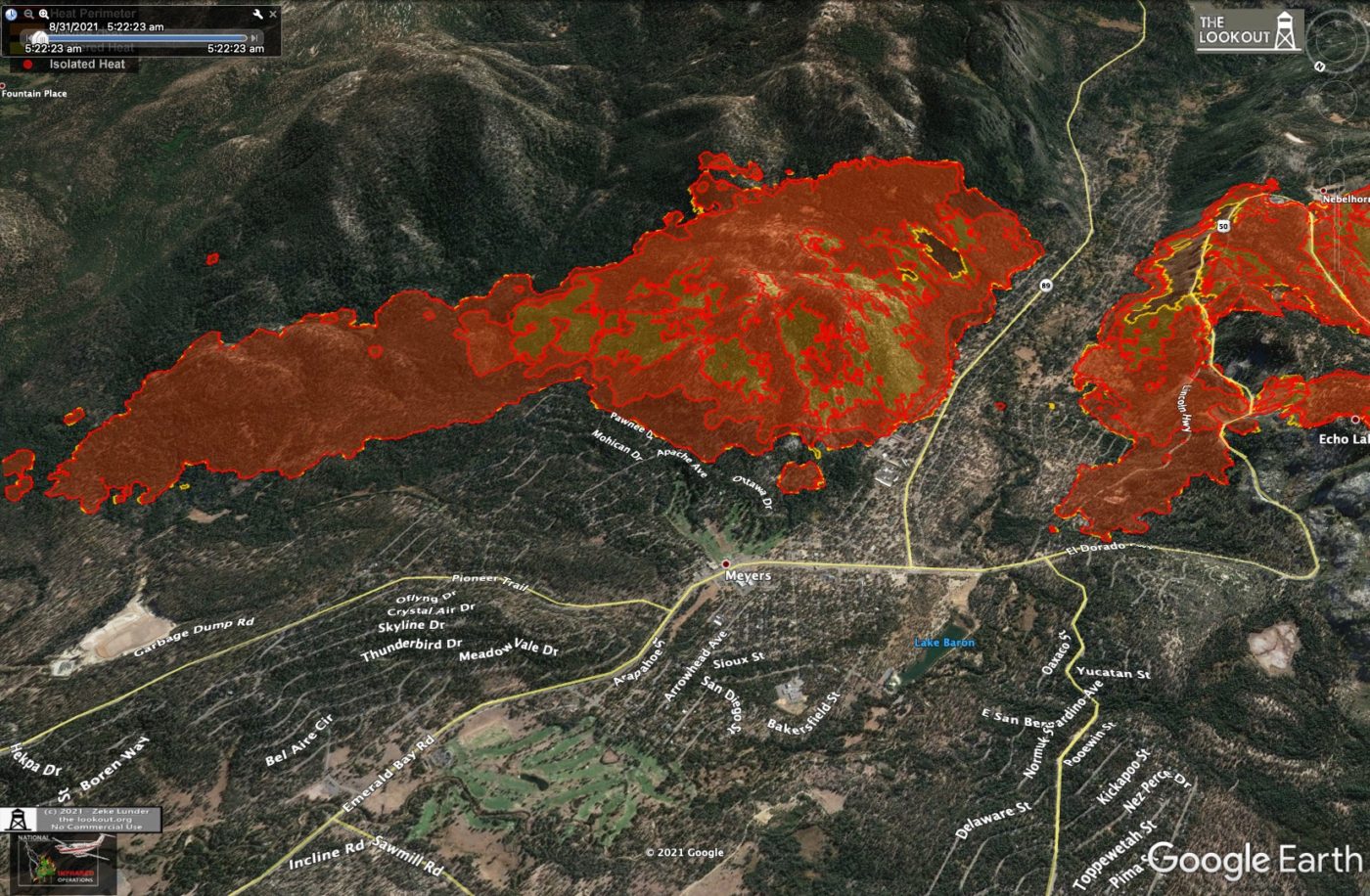 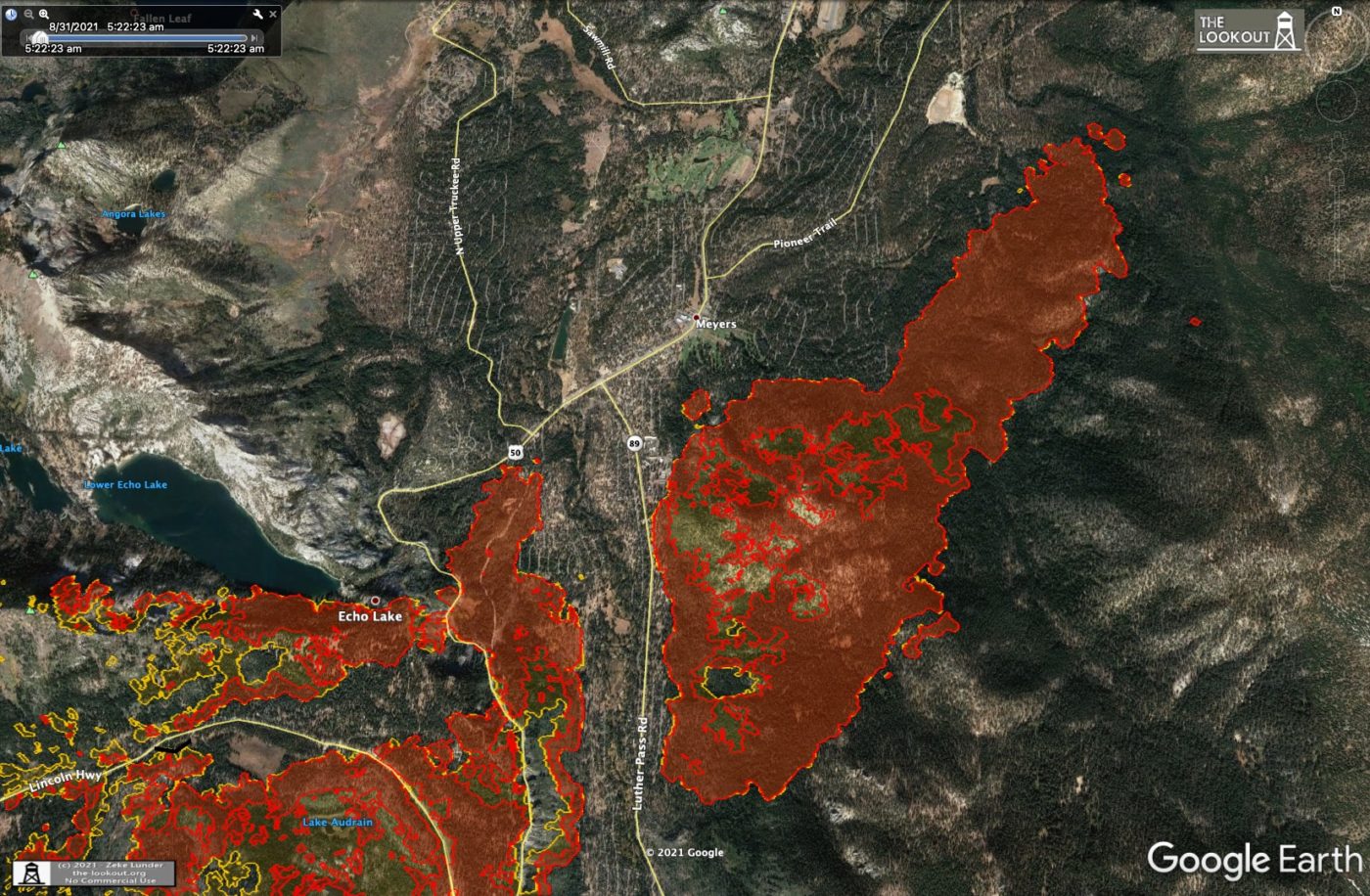 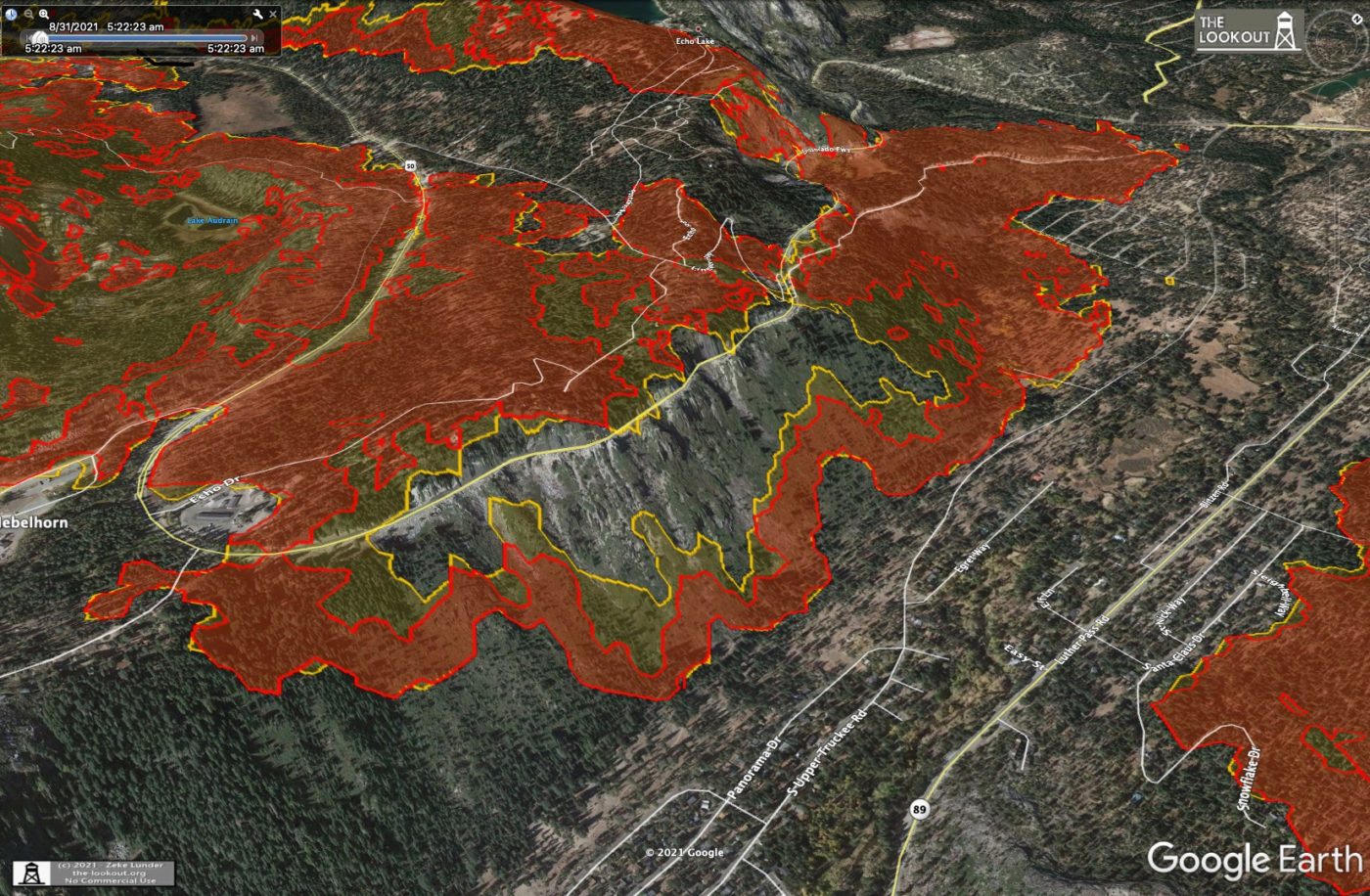 Looking northeast toward Meyers. The new growth on the east side of Highway 50 grew 2,000 acres in 12 hours. 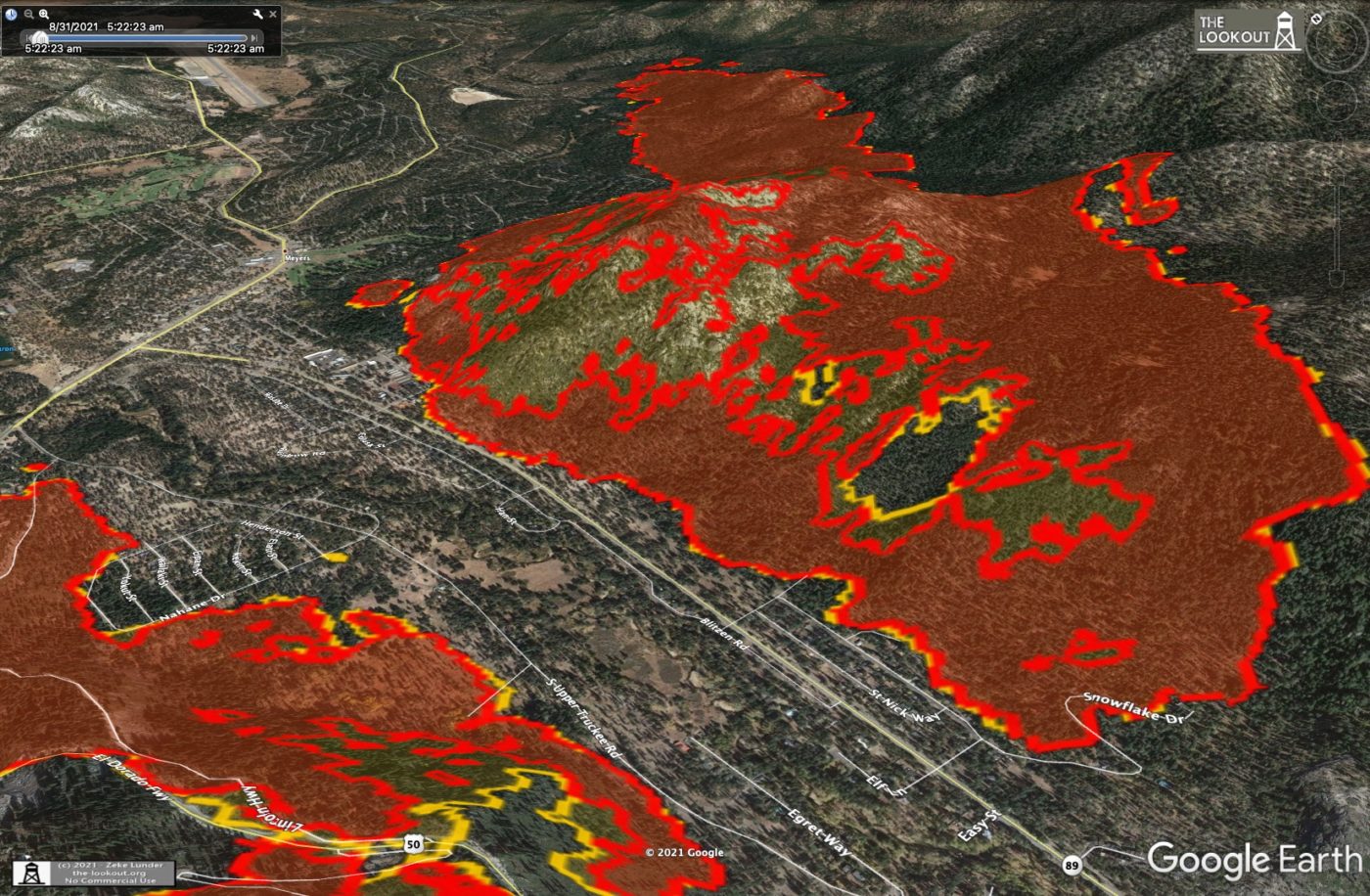 Looking southeast over Meyers at fire established on east side of Highway 89. 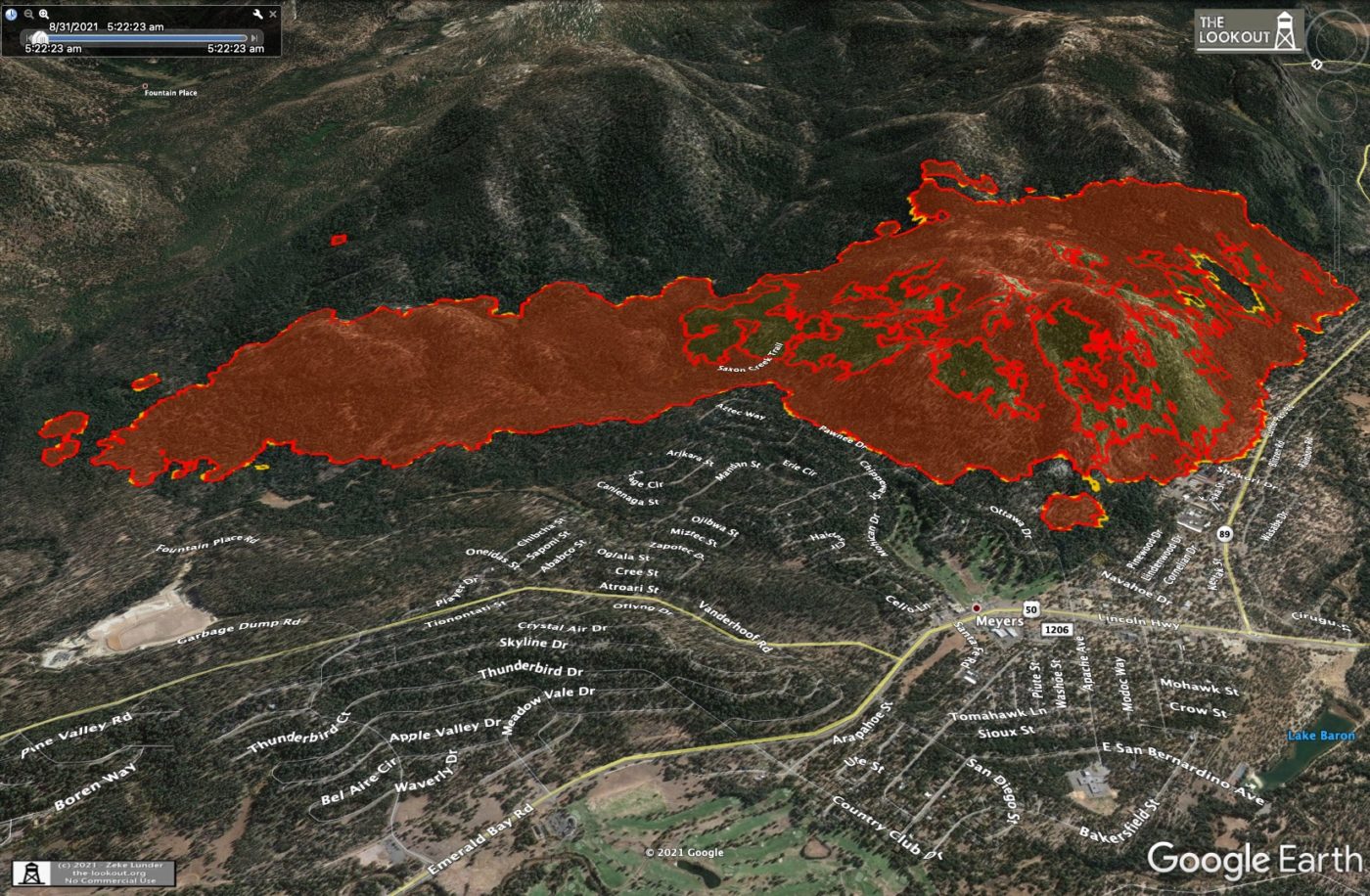 Looking up Christmas Valley and Old Meyers Grade to the south. The north head in the center of this image is likely to cause major problems today, and is very likely to cross Highway 50 and head north. 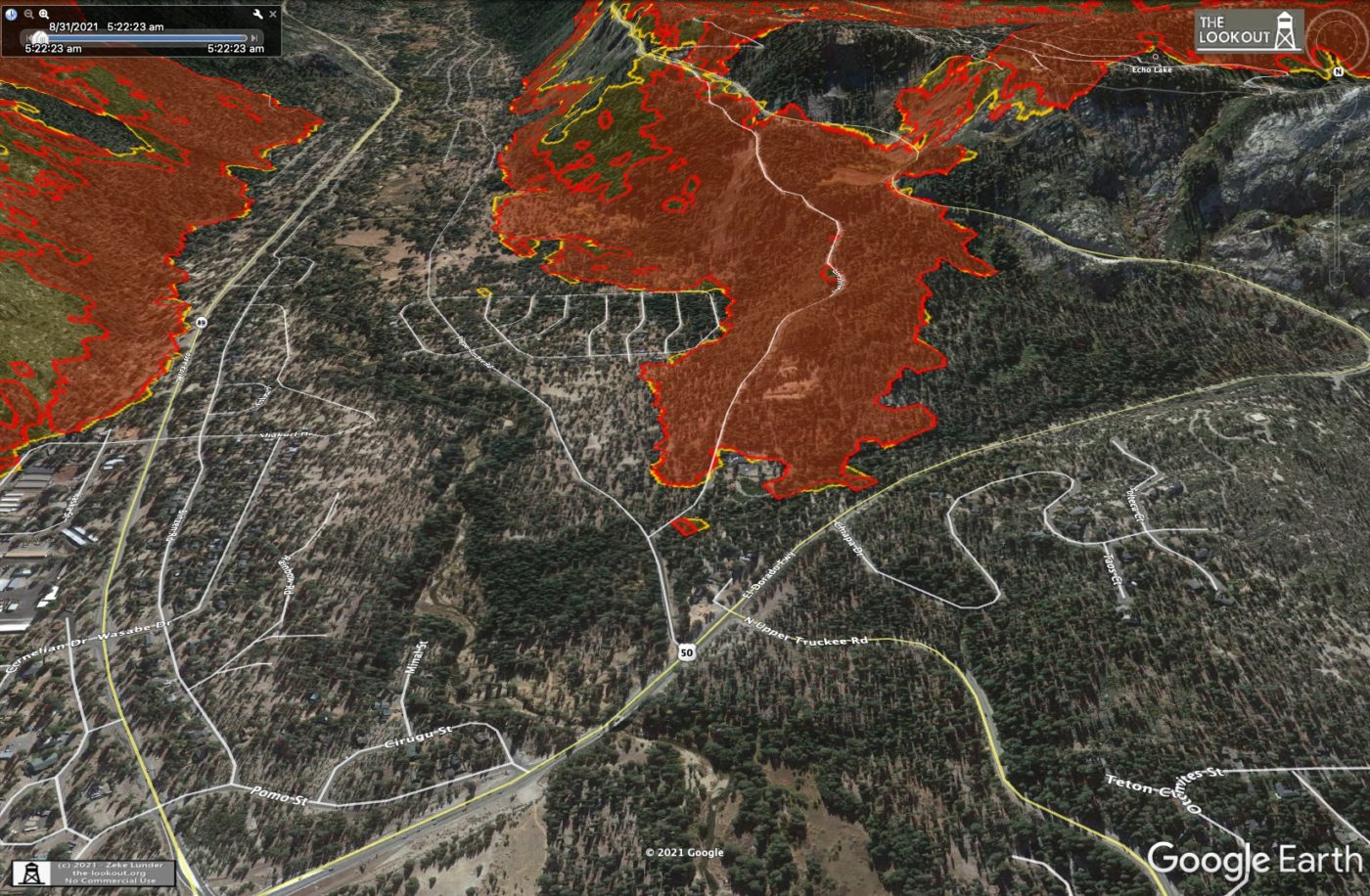 There was an unburned area at Echo Summit. 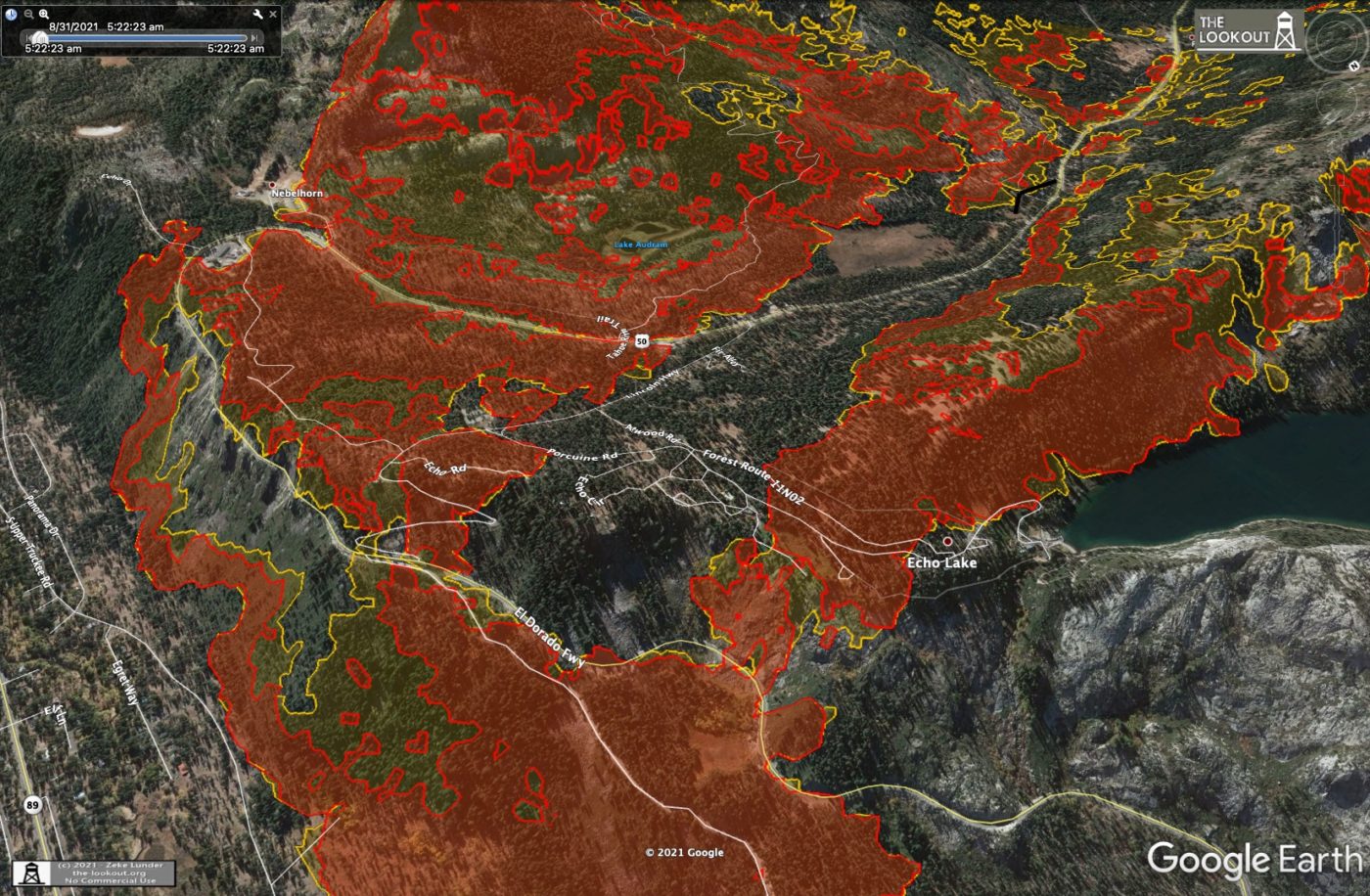 Moving southeast, this image looks west over Cody Lake. Bulldozer lines (black) continue to hold here. But with major emphasis on saving structures in South Lake Tahoe, resources are tight, and the fire to the right of center in this image is likely to continue to move uphill (to the left on the map). 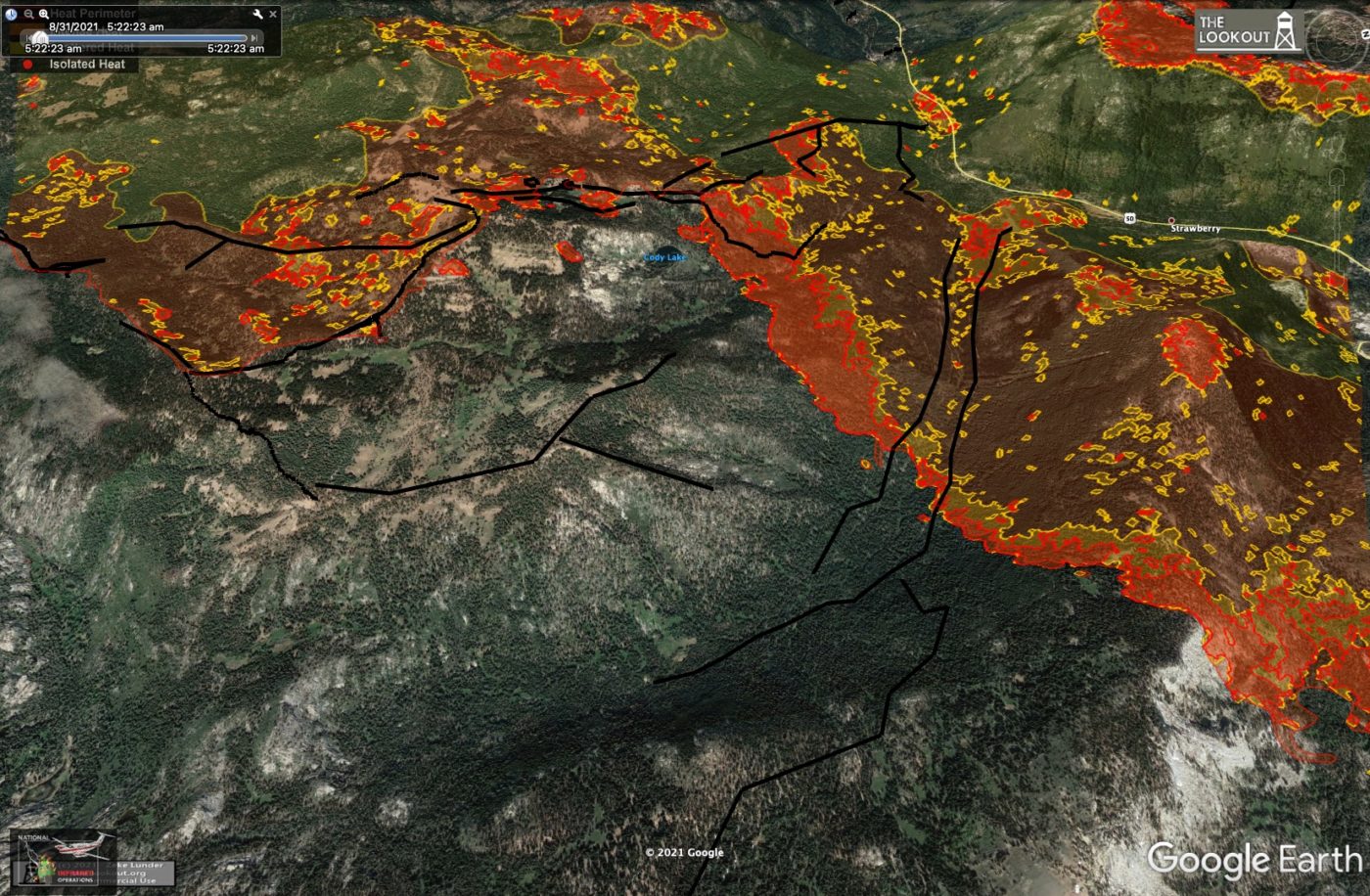 There were major firing operations on Highway 88 overnight. Fire is nearly to Kirkwood (bottom-center). 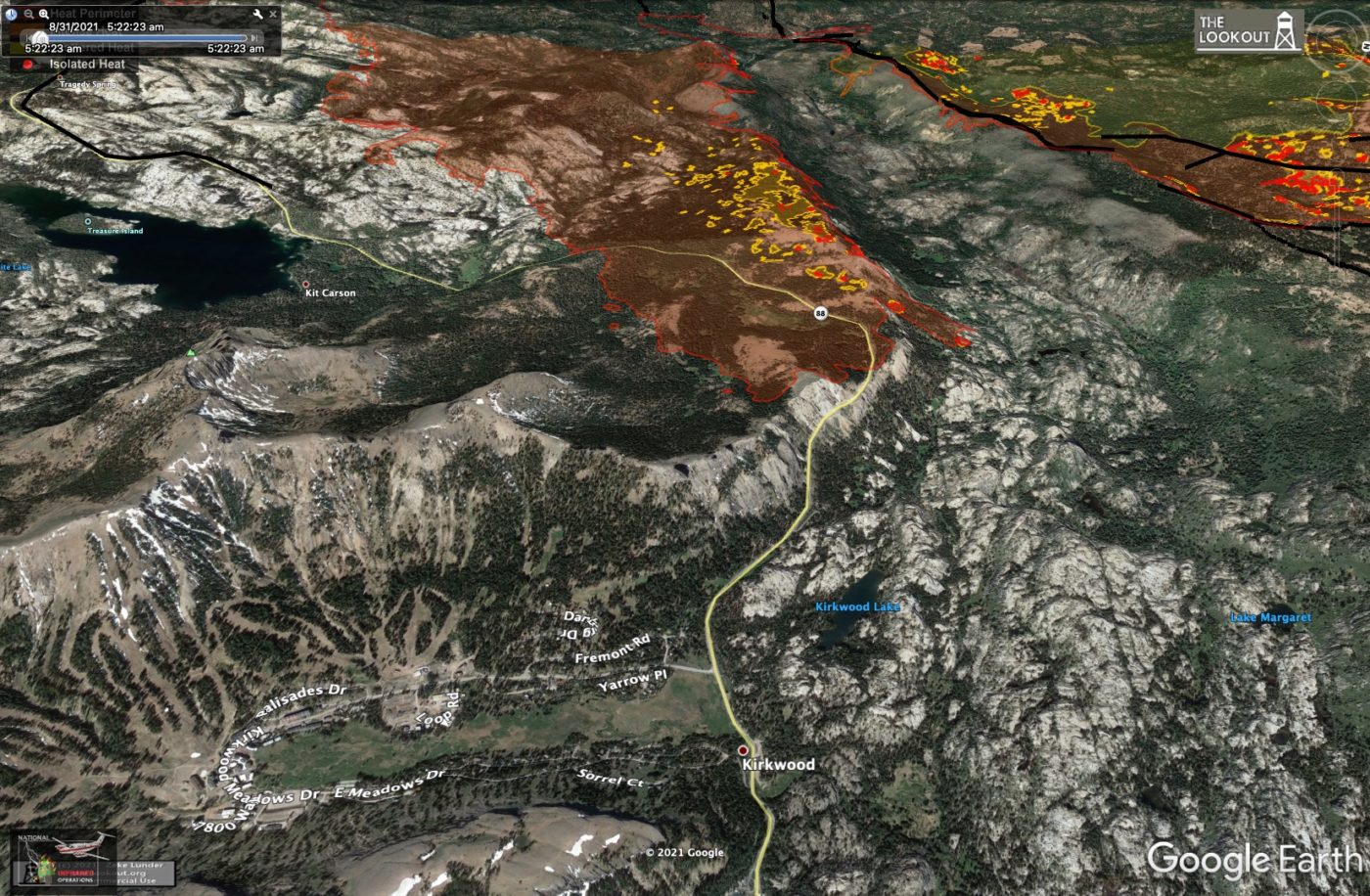 Firing operations at 4:15am west of Silver Lake and looking northwest. The swath of bright heat is the edge of the heat scan boundary. 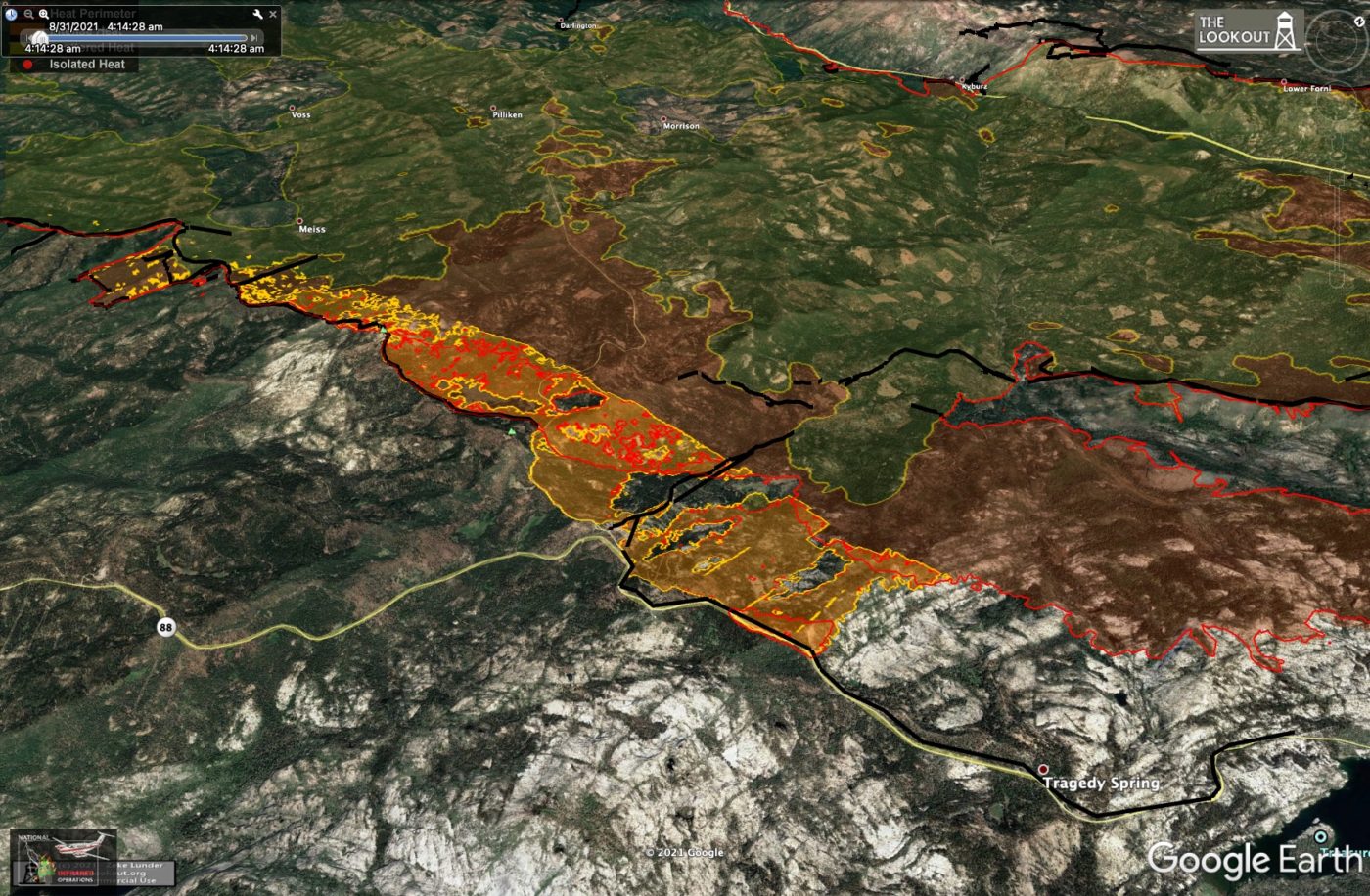 Looking north over Highway 88 with Silver Lake is on the far right. 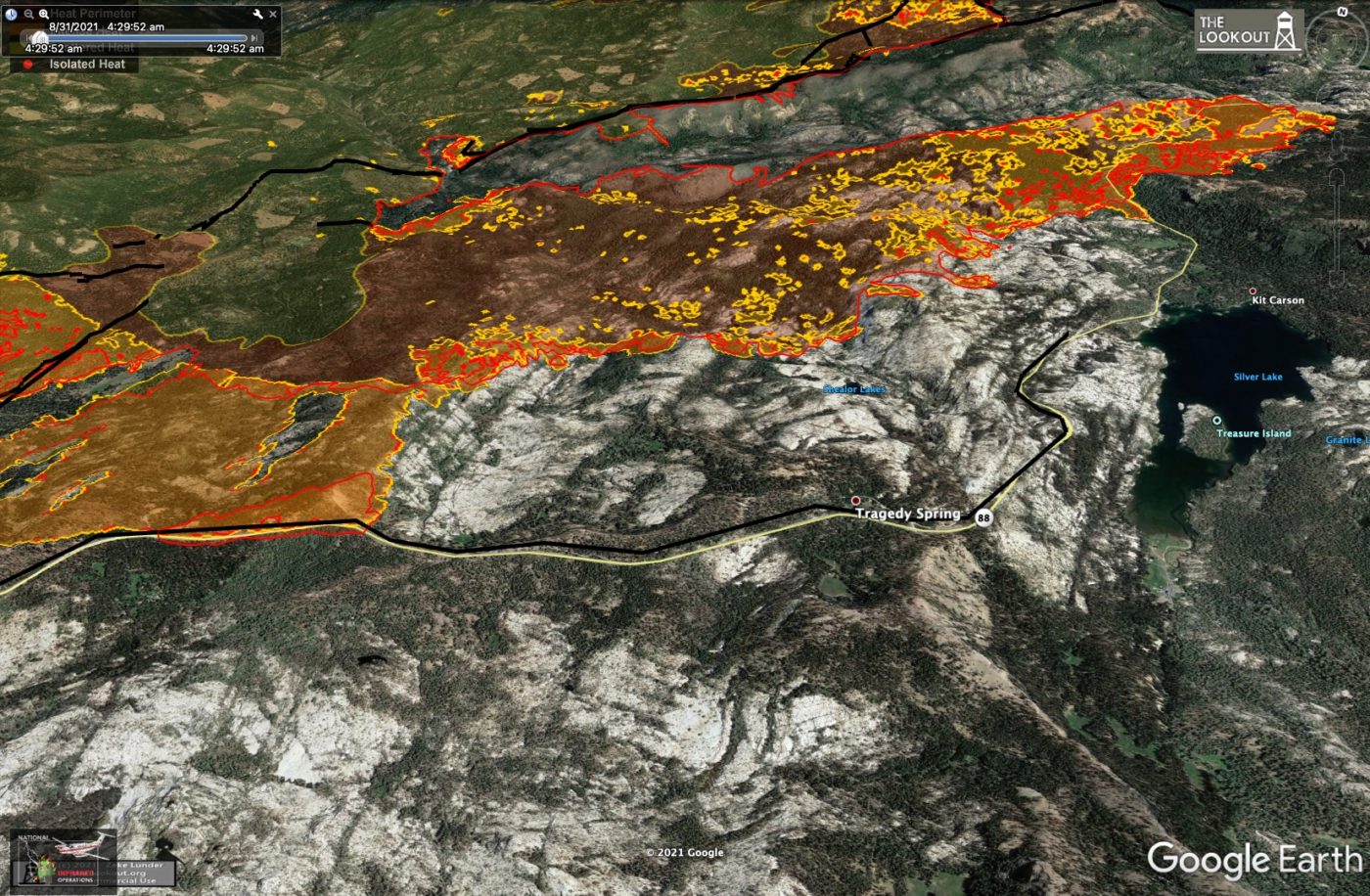 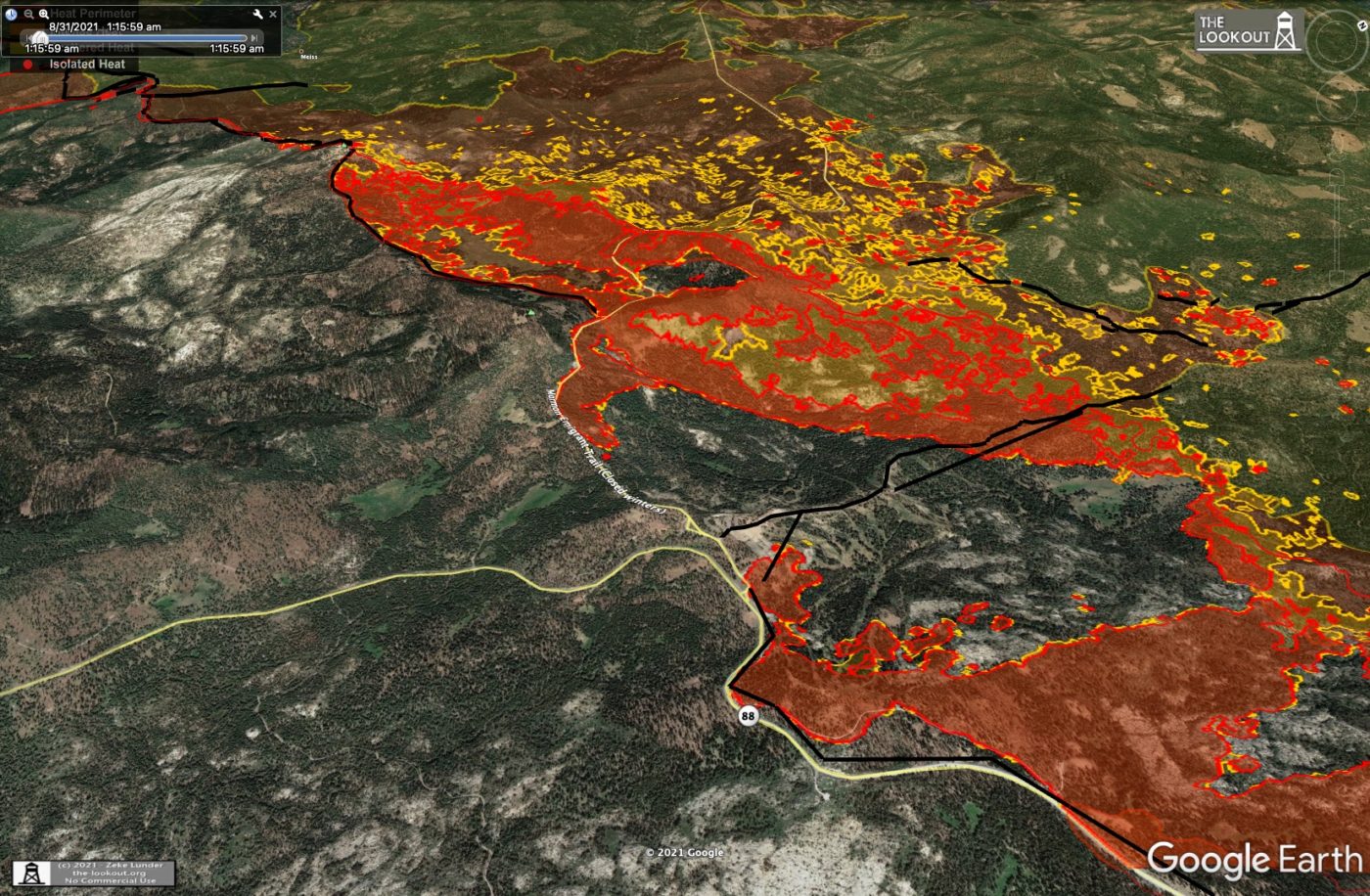 Nothing new to report on south or west flanks of the fire. Things appear to be cooling off.

There continues to be some backing fire in the canyon near White Hall. 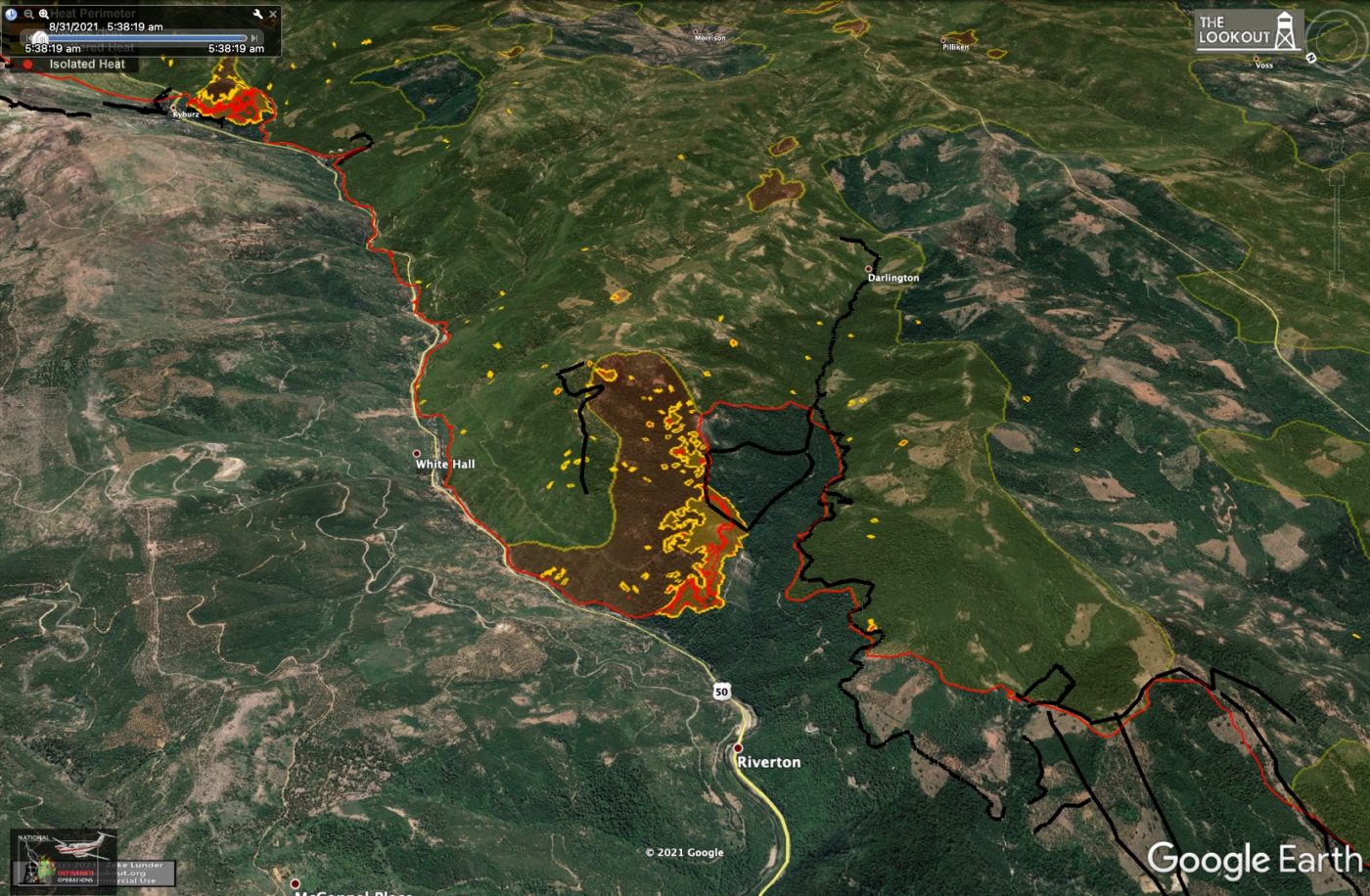 Fire continues to back in around Kyburz. I have been getting some updates on the fire behavior in this area from a local. They are happy with the way the fire is backing into the canyon and feels like conditions here will be much safer after the fire. I will add their narrative to a post once I have a minute to figure out exactly where they are talking about. 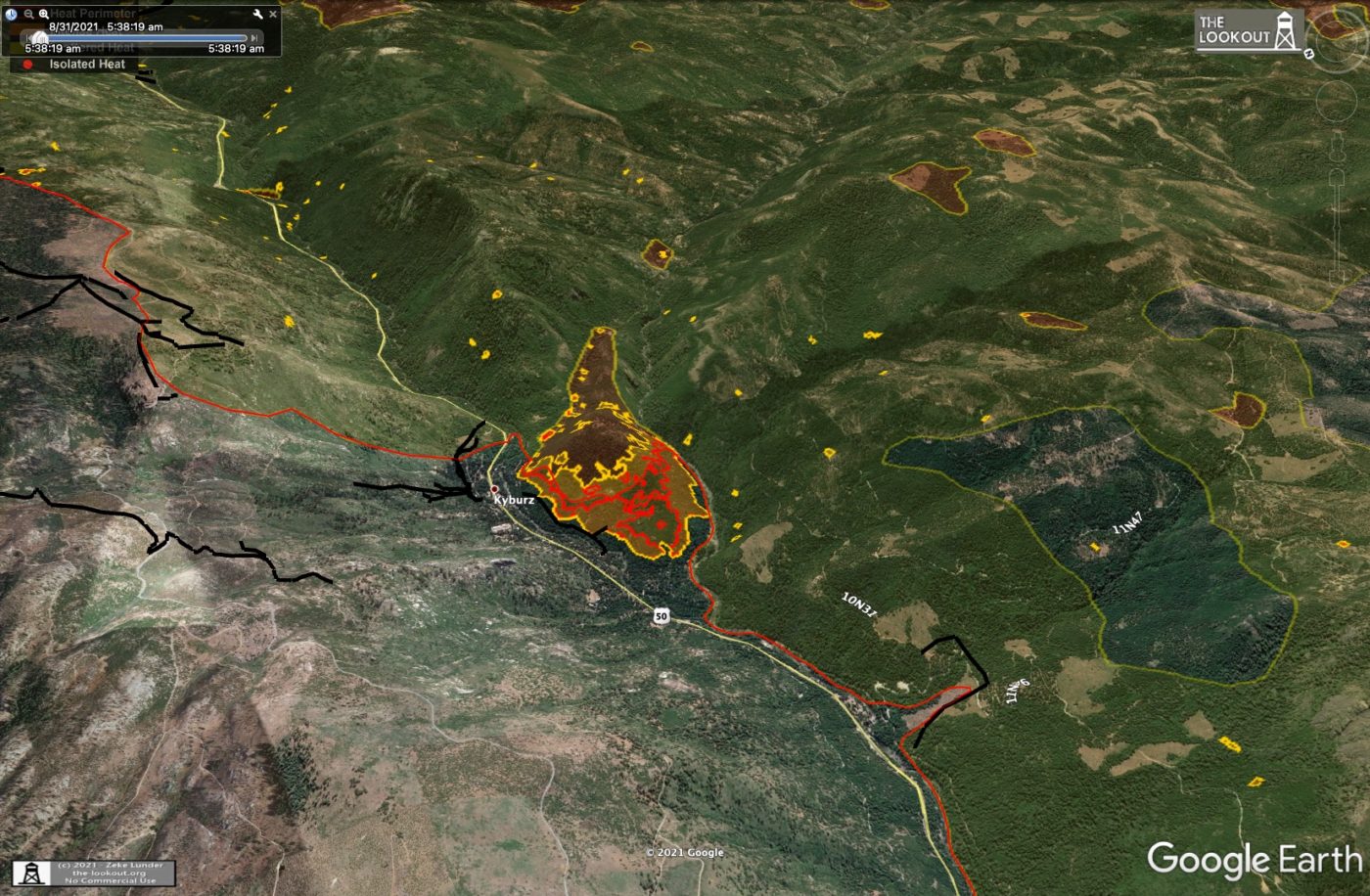 Northern edge of the fire east of Kyburz still looking pretty good — there is a small spot fire showing on the heat mapping over the dozer lines here in center of image. 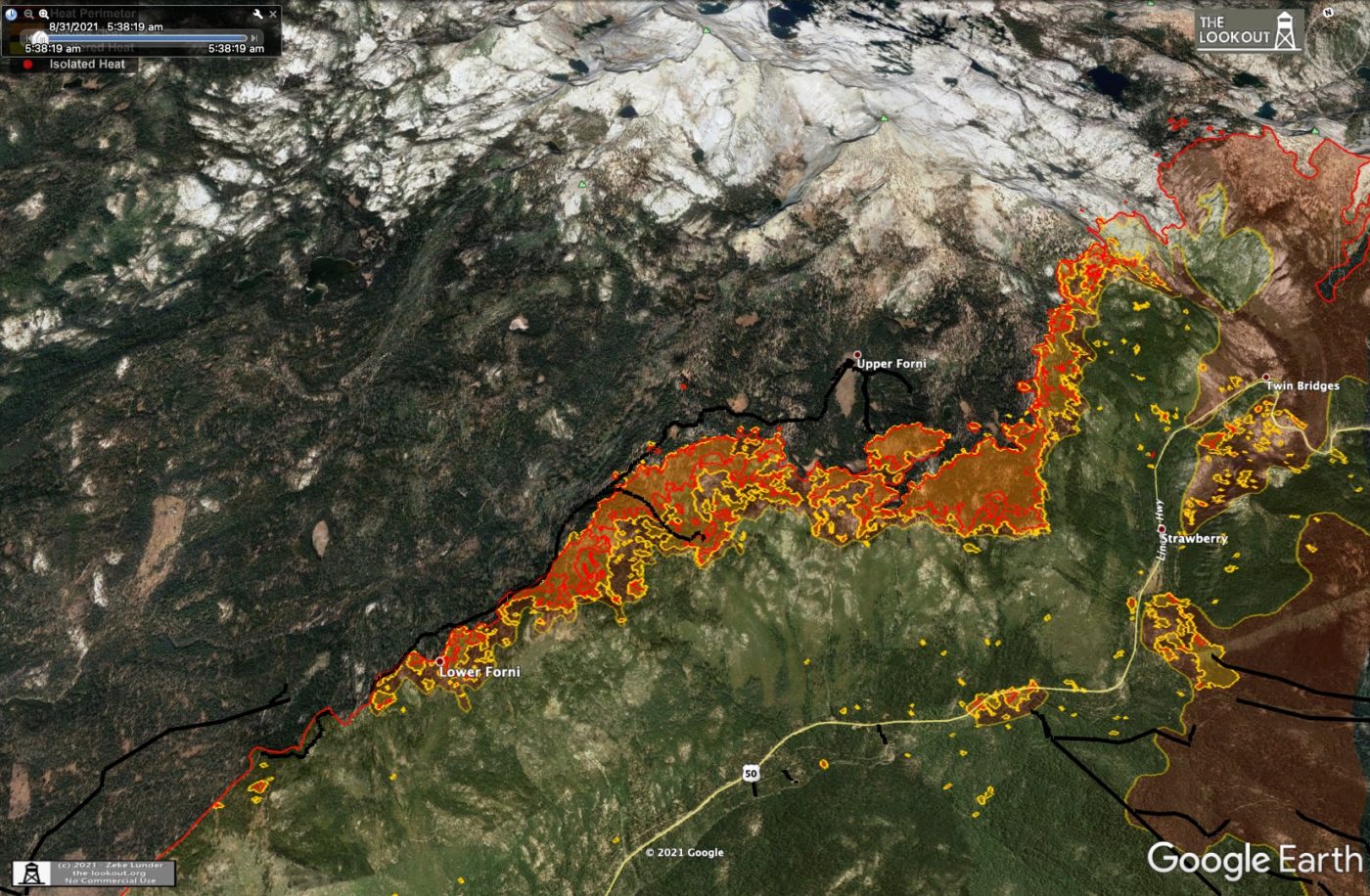 Looking northeast toward Echo Lake. Lots of spot fires into islands of vegetation in the granite around Ralston Peak. 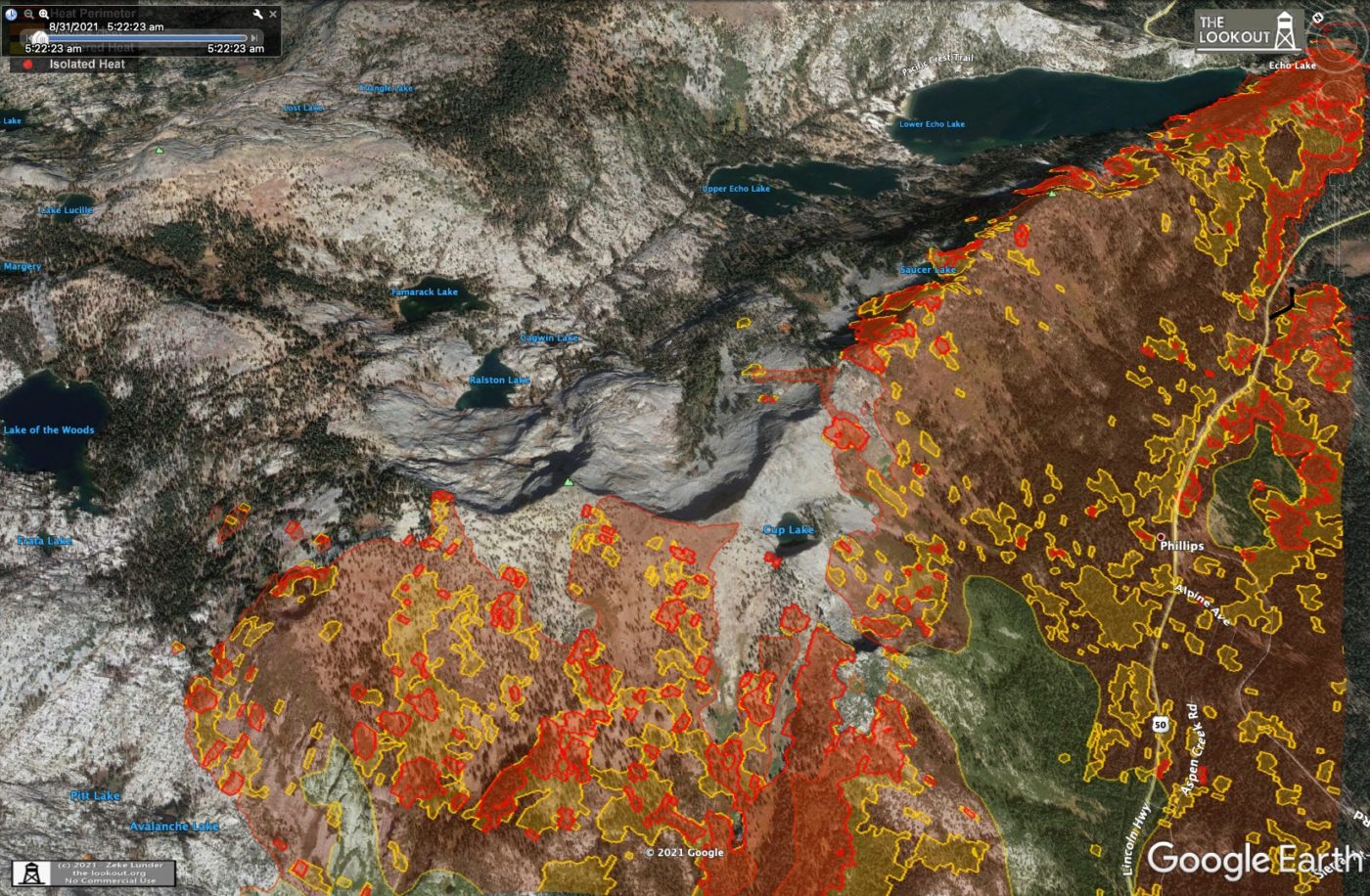 There is an unburned area west of Echo Summit. This view looks northeast. Lincoln Highway in center. 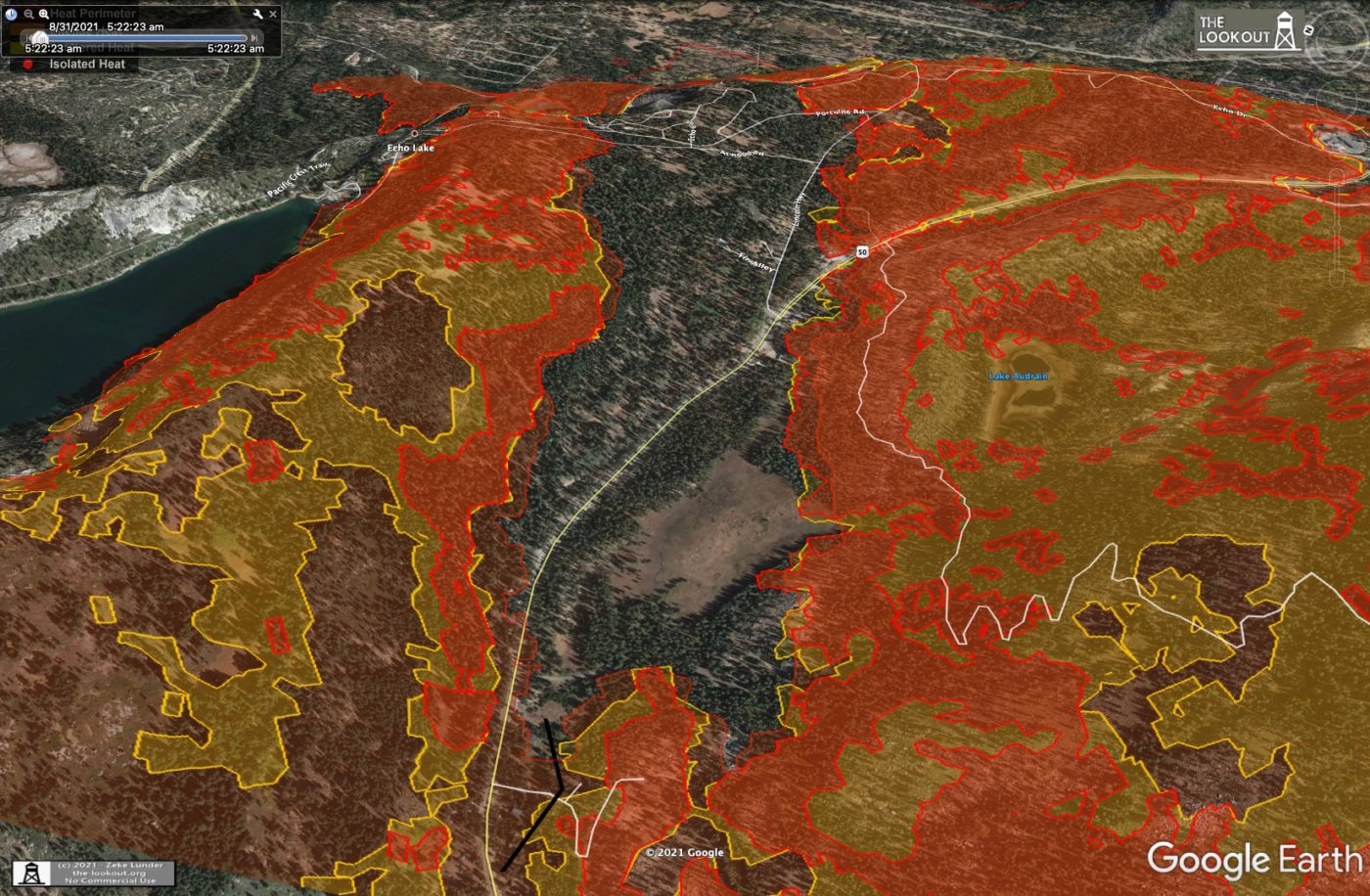 Weather summary:
Windy with strong gusts and low relative humidity. Downslope and downcanyon winds ending by 0800 in lower drainages otherwise becoming wind to very windy. Ridgeline wind gusts to 40-45 mph can be expected over the east and northeast edges of the fire with speeds not as high over the lower ridges. Over the west side of the fire expect southwest winds 12-17 mph with gusts to 25 mph through the day. Highs 77-87 higher elevations and 87-97 lower elevations. Min humidity…10-15 percent.

Fire behavior summary: Humidity recovery remained poor overnight and allowed the fire to continue to actively burn. Fuel conditions remain critical and we still see active crown runs and group torching in the northeastern divisions of the fire. Current fire behavior is contributing to ember casts traveling up to half a mile. We anticipate early morning winds in the northeast area of the fire. Fire weakened trees continue to present a risk for crews. 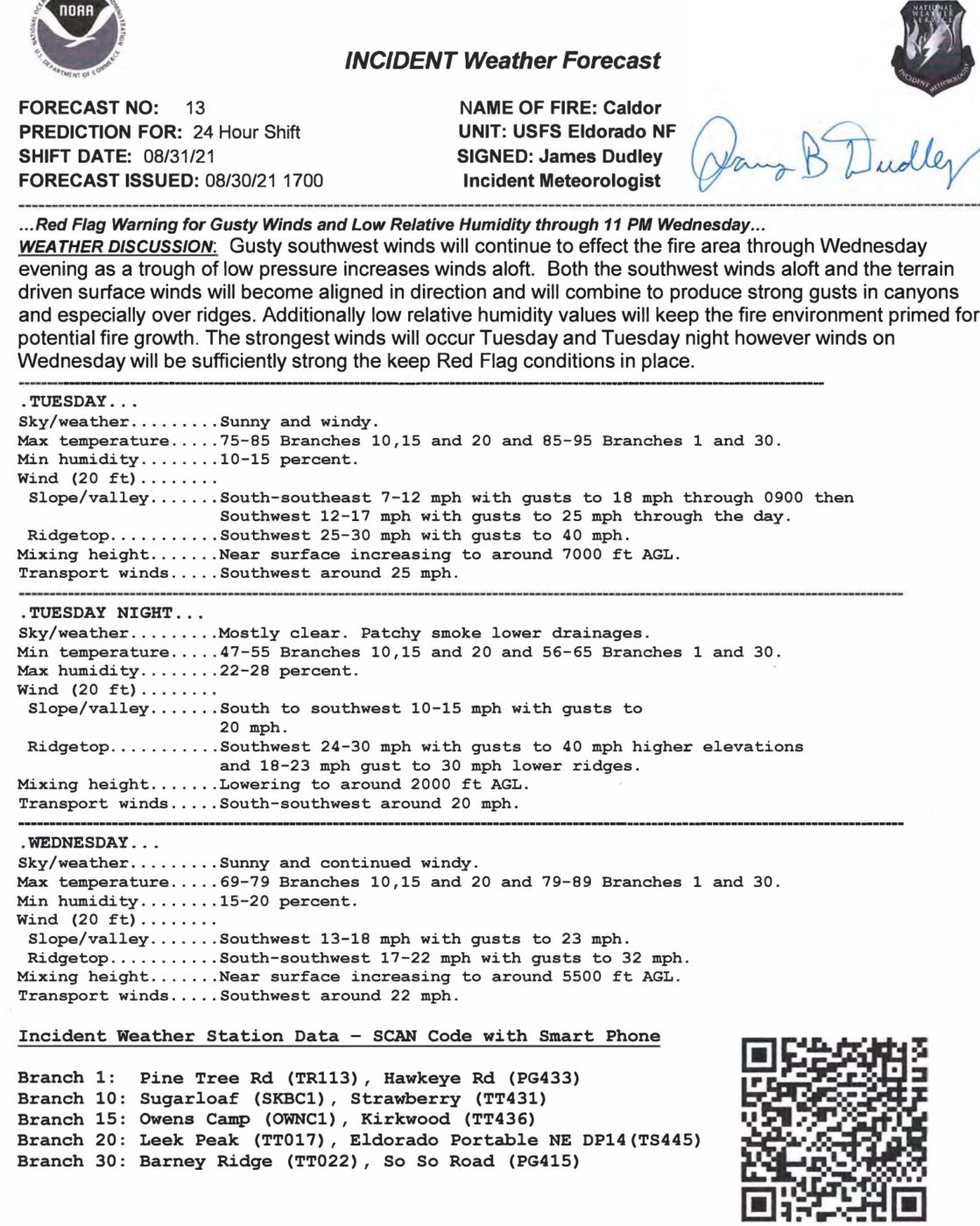 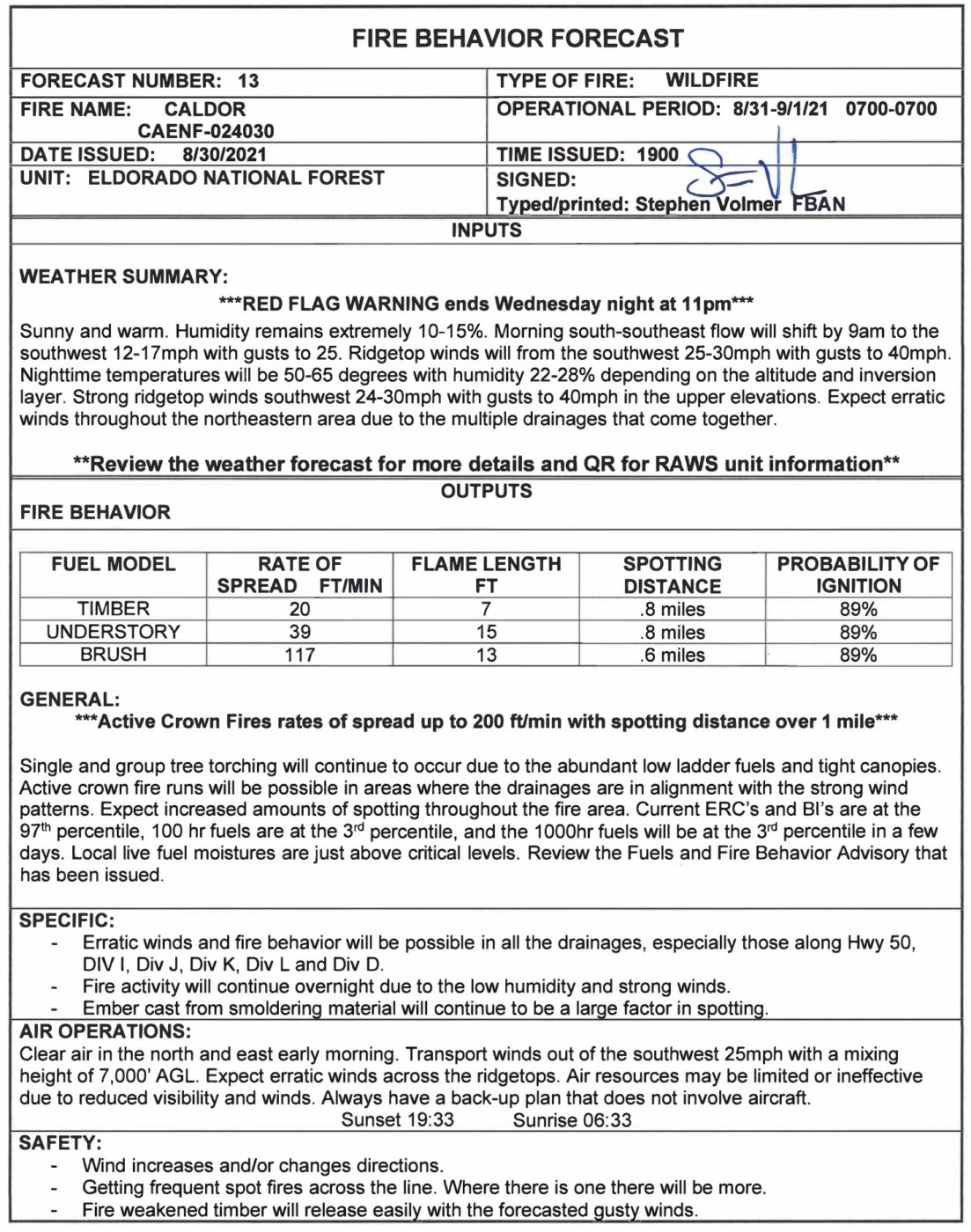