8/30/2021 – 8:00 am
Good morning. Sending our best wishes to everyone displaced by this fire and living in fear of losing their home right now. I spent the last month on edge waiting to see if the Dixie Fire would take my parents’ and brother’s homes. I feel your anxiety. I am hoping we can thread the needle here, providing good information without overloading your troubled minds. 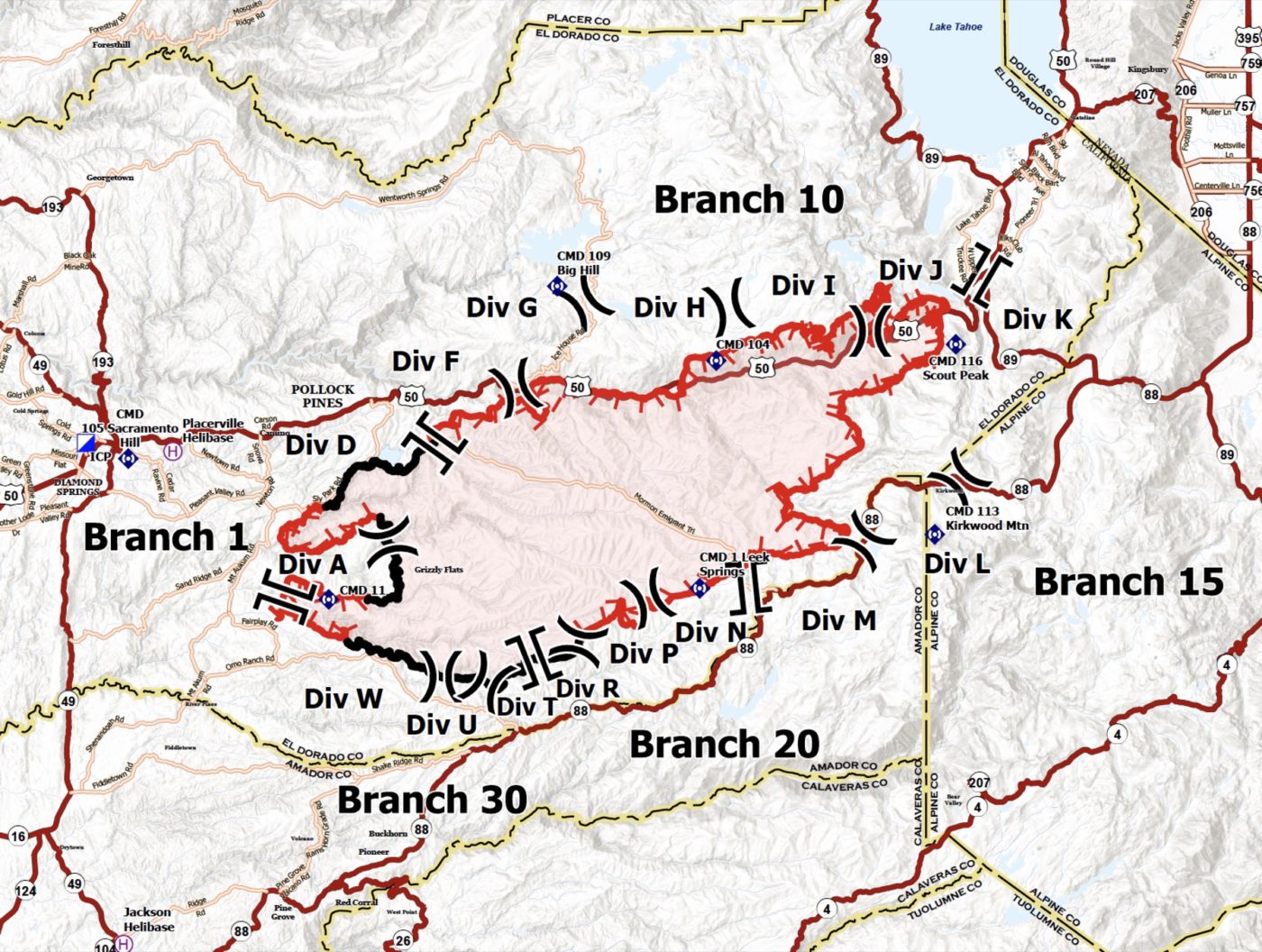 Overnight Fire Behavior
Humidity recovery remained poor overnight. This allowed the fire to continue burning actively through the night, although activity lessened after sundown with the temperature drop.  Active crown runs and group torching continued on the northeast end of the fire and around Echo Summit and  near Leek Springs (Division N) resulting in abundant ember cast and spot fires. Spotting distances were over half a mile, starting new fires. Below 4,500′ an overnight inversion settled in, decreasing the fire activity to levels that allowed for firefighting directly on the fire’s edge. Slow backing fire down to the river continued into the Highway 50 corridor. Fire weakened trees continued to fall throughout the night, blocking roadways and threatening established firelines. Early morning activity increased in the northeastern area of the fire due to an increase in ridgetop winds. This is visible on the Armstrong Lookout Webcam.

Weather Concerns
***Red Flag Warning for Gusty Winds and Low Relative Humidity in Effect from 11:00am Monday through 11:00pm Tuesday Evening.***
Observed weather: Smoke and inversions developed after 9pm. Low temperatures were 60-70°. Maximum relative humidity only reached the 25-30 percent range in the evening then fell into the upper teens overnight. Winds turned downslope 2-6mph with gusts to 15mph below favored drainages. Over the ridges on the east end of the fire, winds remained southwest at 5-12mph.

Forecast for Monday: Areas of smoke in lower drainages through mid-morning and otherwise sunny and becoming locally windy. Downslope and downcanyon winds ending by 9am then winds becoming southwest 11-16mph with gusts to 25mph. Over ridges winds southwest 18-23mph with gusts to 32mph. Highs 77-87° higher elevations and 87-97° lower elevations. Minimal humidity at 10-15%.

Detailed Maps
These maps are made using heat data from 2:45am, on August 30. White lines show where the fire was at 5:45pm on August 29.

Looking down on the eastern end of the fire, showing relation of the fire to South Lake Tahoe, Fallen Leaf Lake and Meyers. 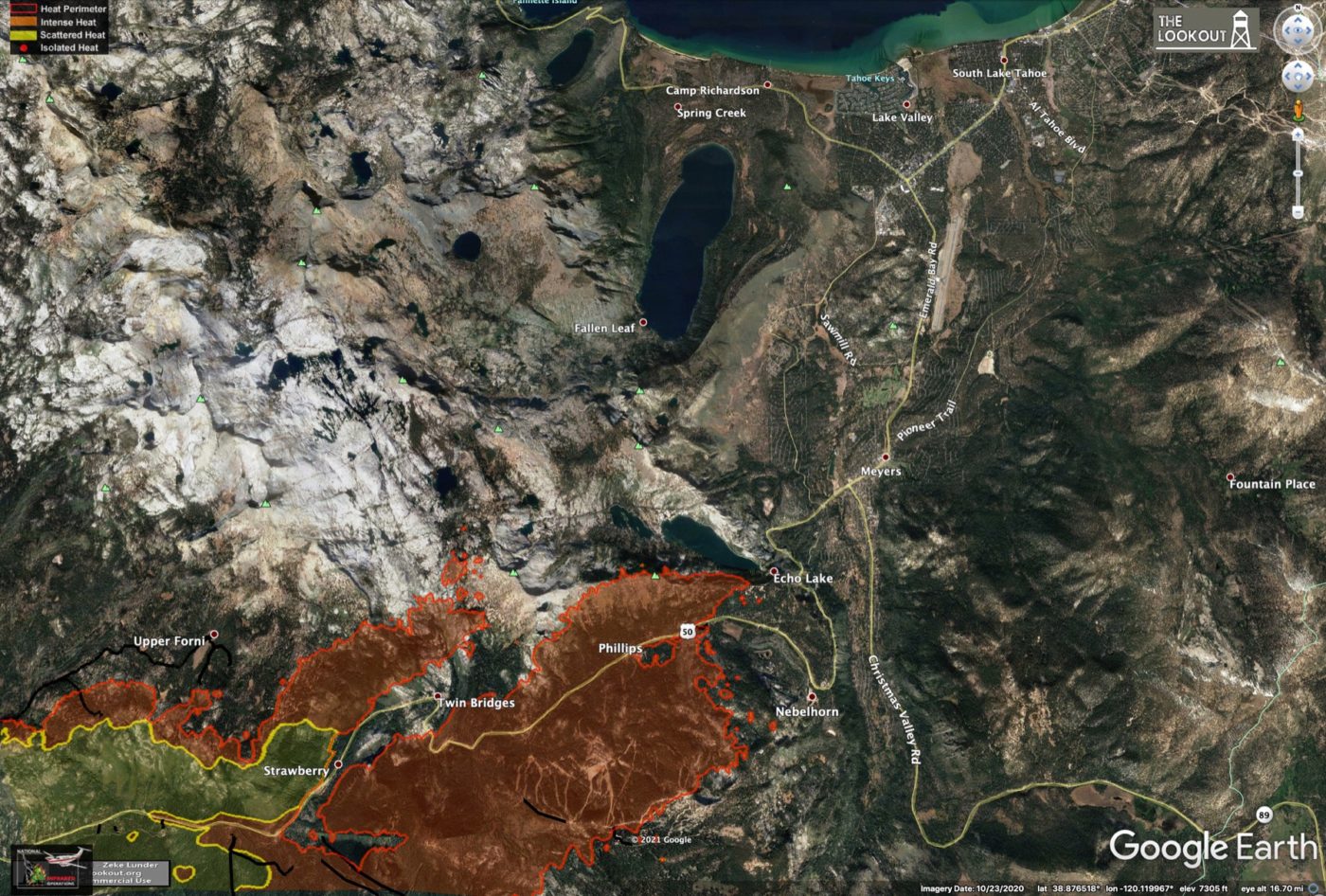 Looking north over the eastern edge of the fire. 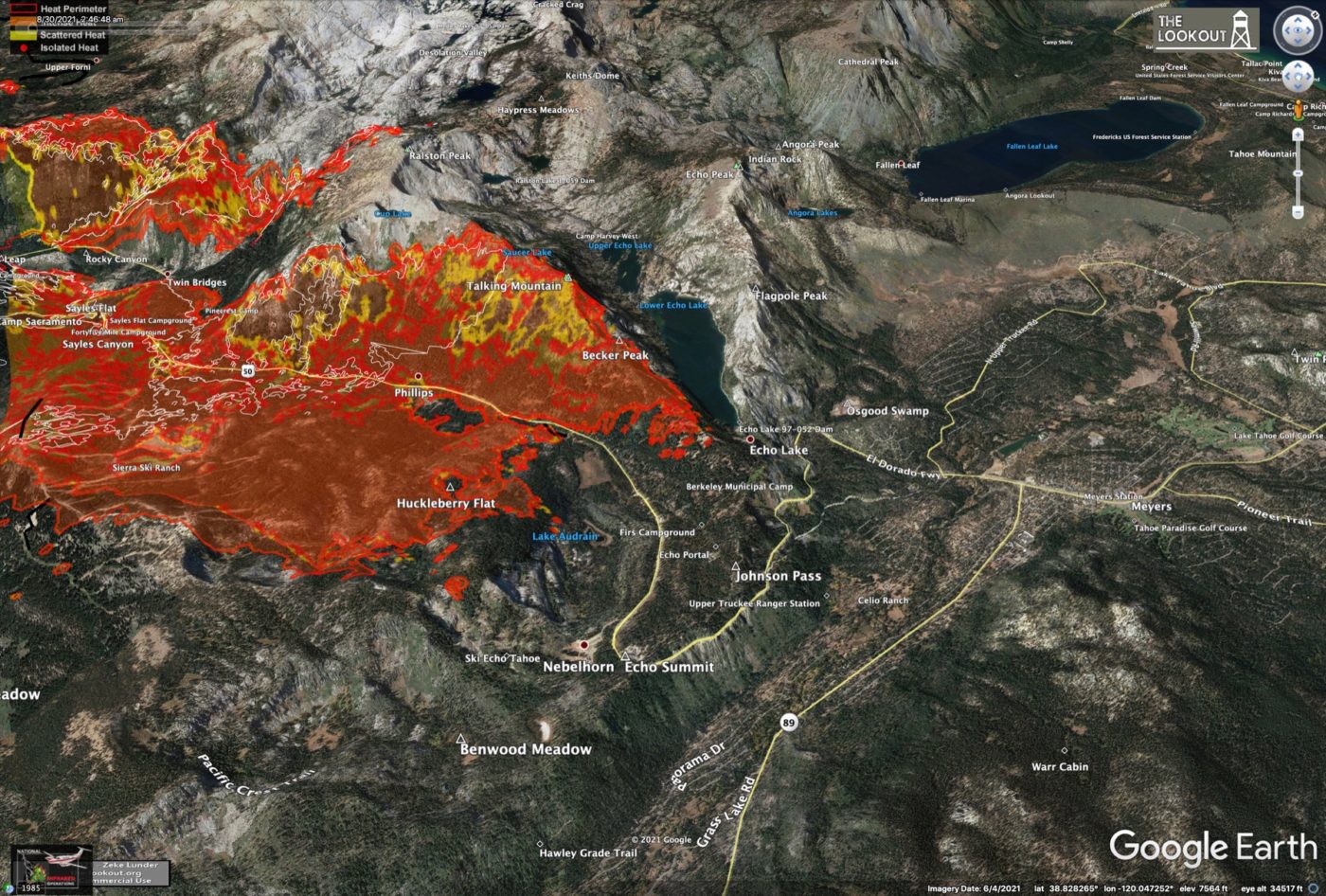 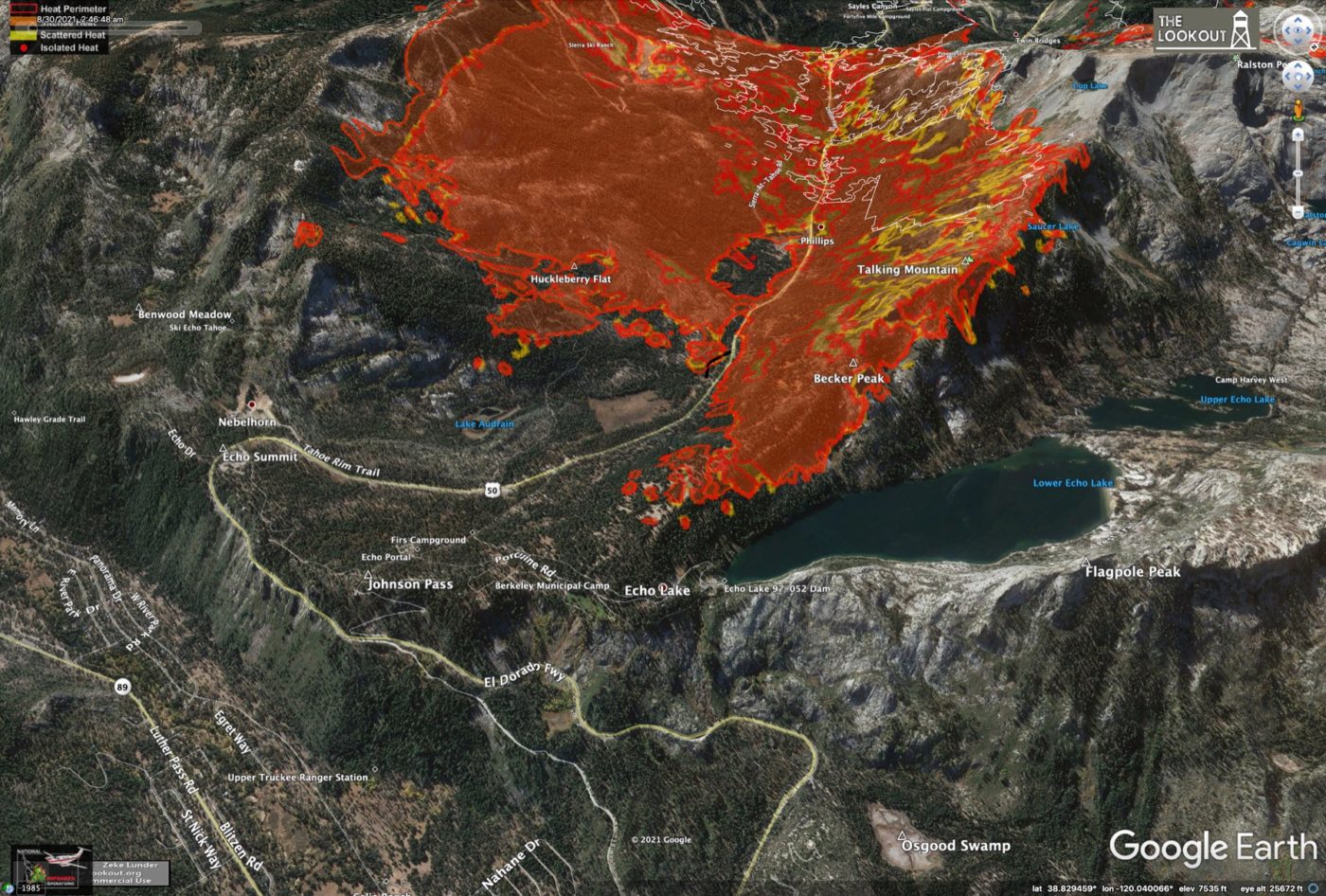 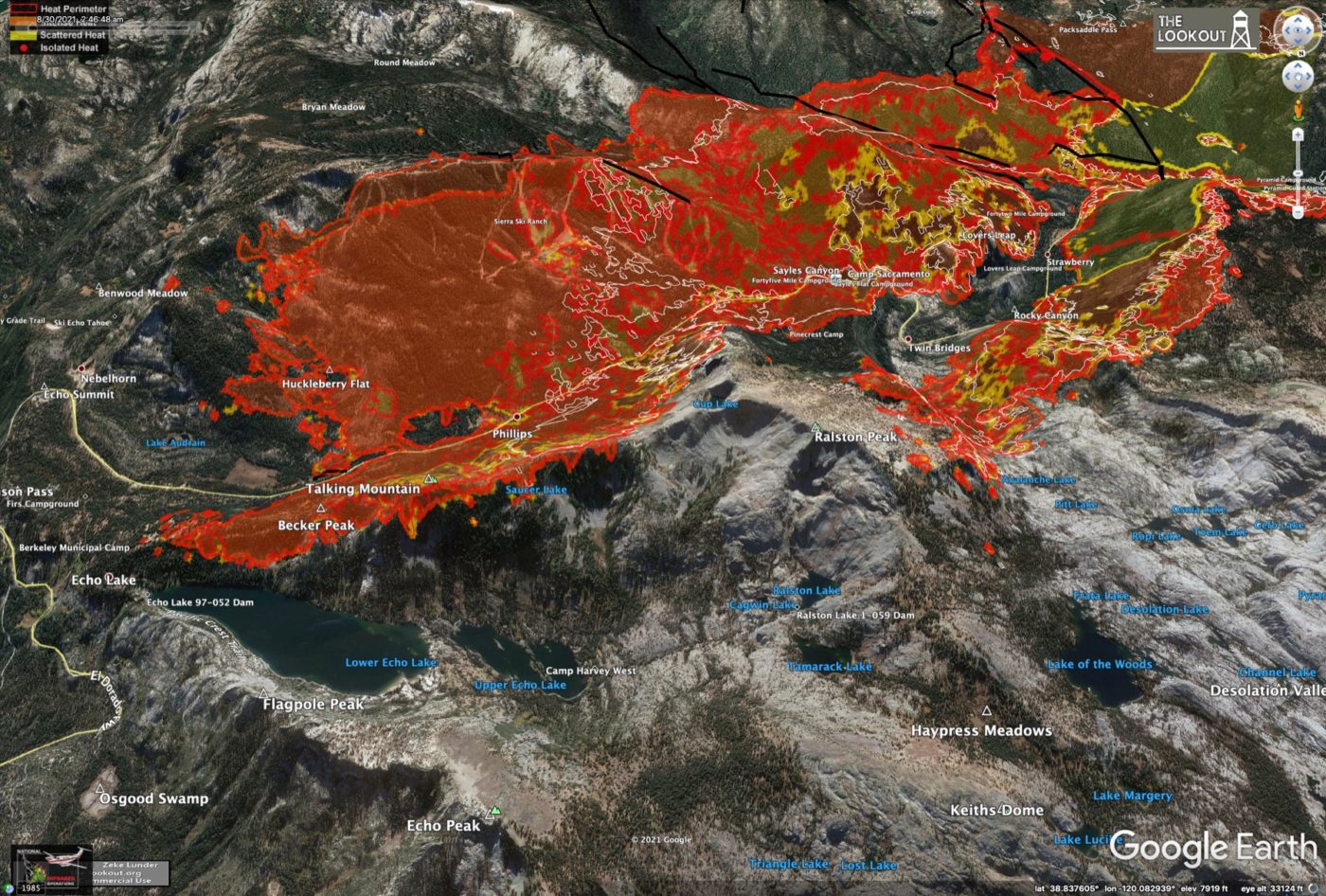 Looking west over Cody Meadows. Firelines in the center of this image were backfired several nights ago, and have kept the fire’s eastward progress in check. However, the fire spread east from Strawberry yesterday and will likely continue to burn south and upslope here. Orange and red mapping from 2:45am on August 30, white line shows overnight fire growth. Black lines are bulldozer firelines. 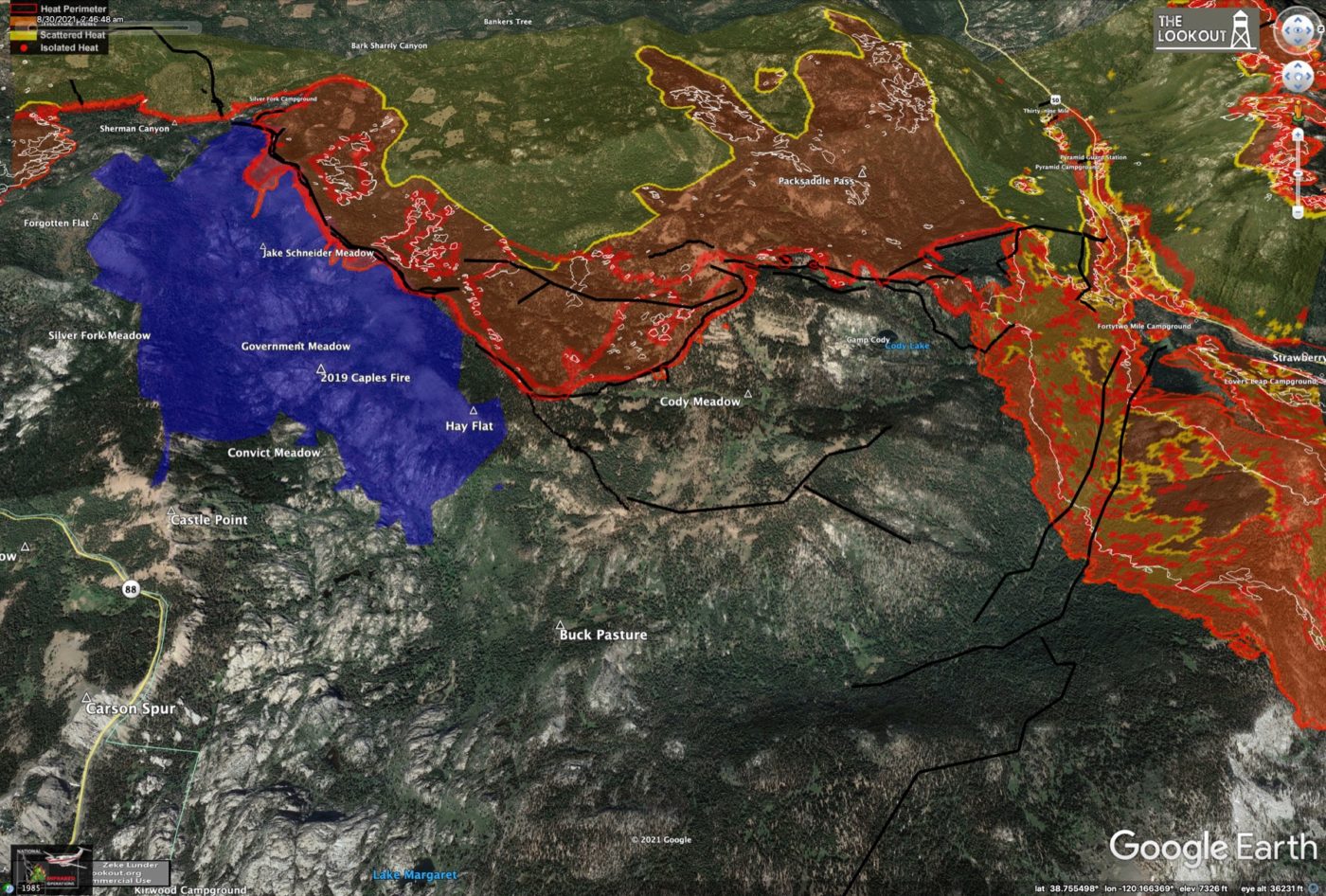 Looking west over Kirkwood. Blue area is 2019 Caples Burn, which was a prescribed fire that escaped control and was declared a wildfire. Both the prescribed burn and wildfire helped to reduce fuel loading without killing many of the largest trees. The Caples Burn is helping slow spread on this flank of the fire, but it has been outflanked by fire spread from the west. Black lines are bulldozer firelines. 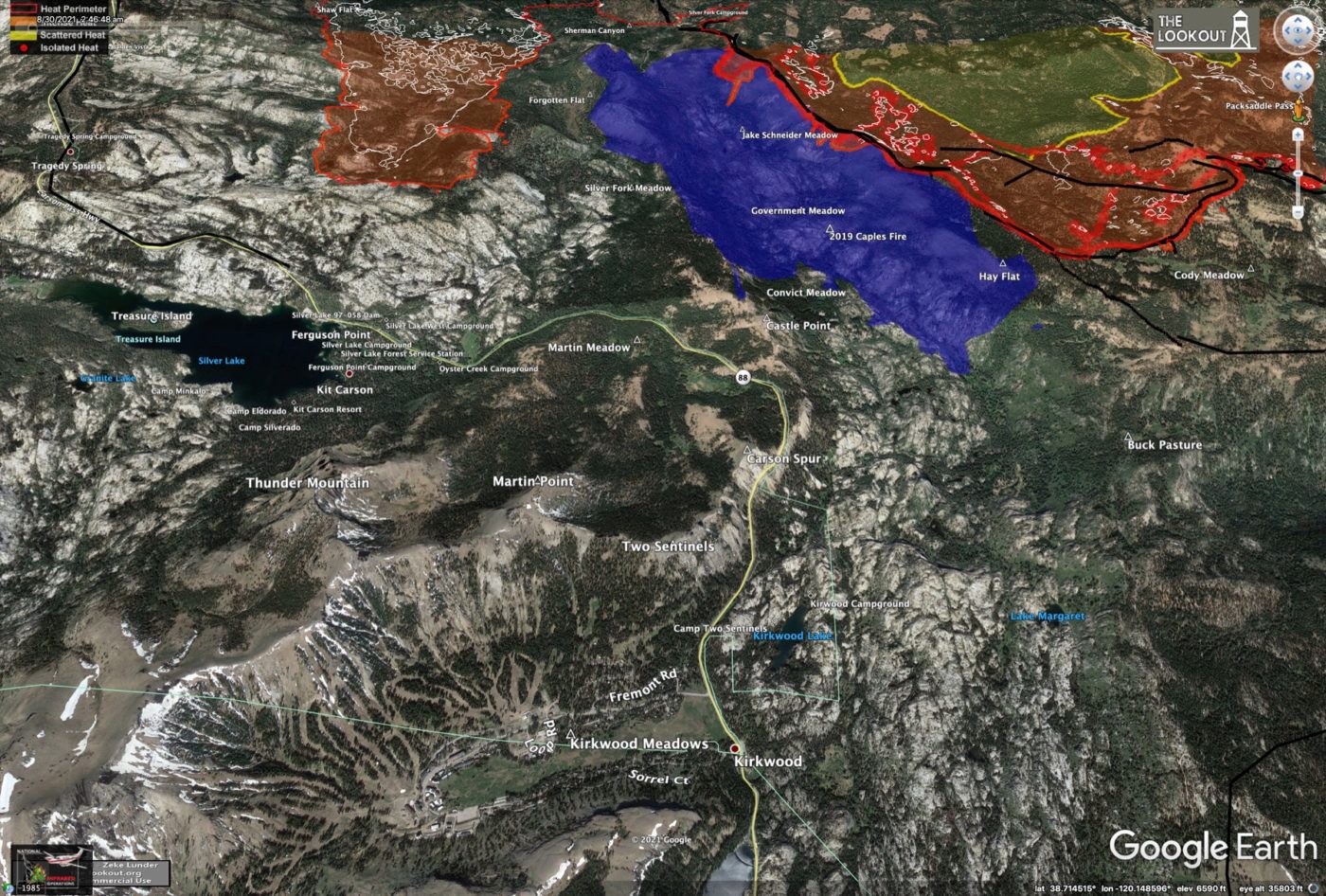 The fire continues to spread actively to the south toward Silver Lake and Highway 88. White line shows overnight fire spread. View to the NW. Black lines are bulldozer firelines. 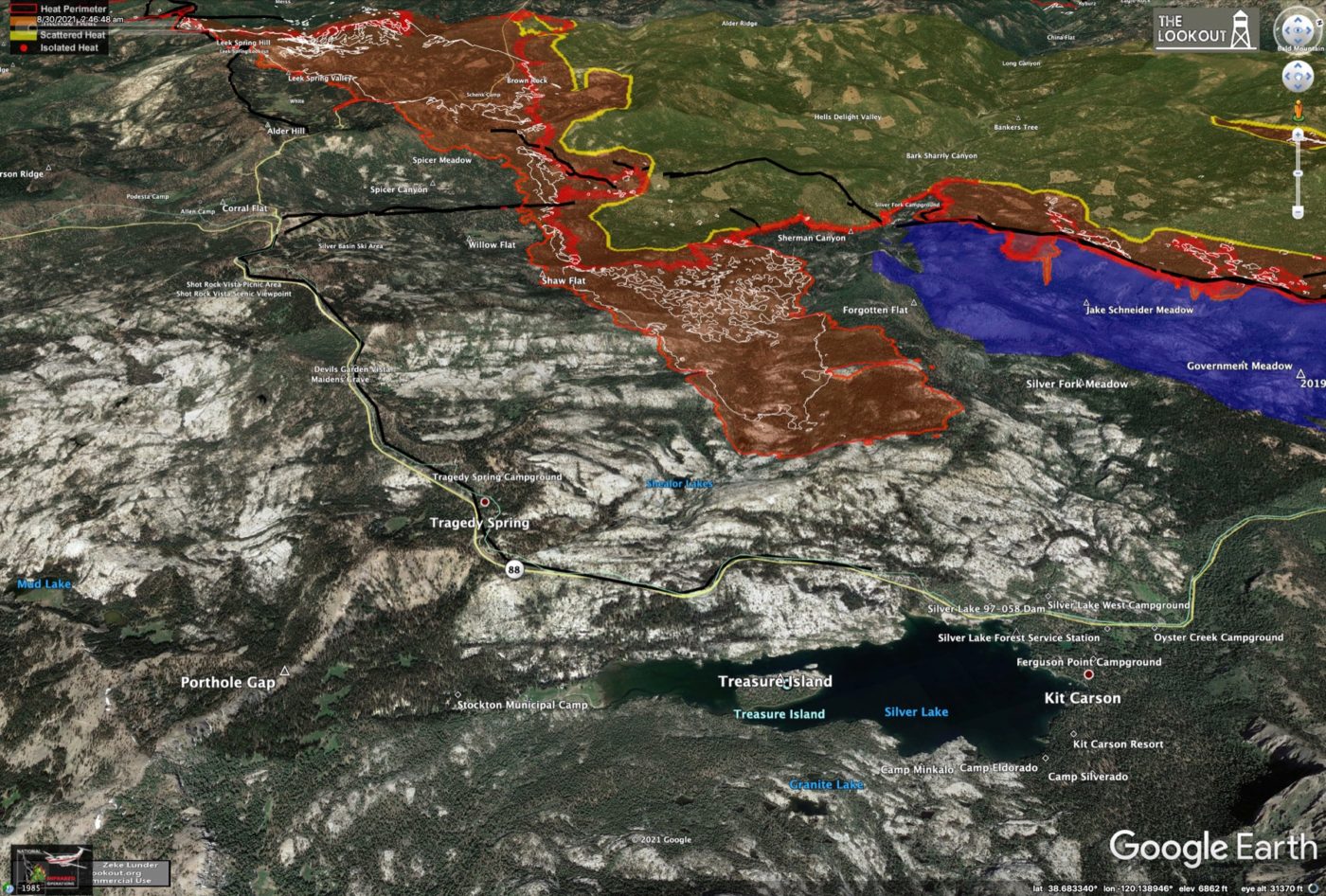 Fire spread very actively to the SE around Leek Springs Hill and Spicer Meadow yesterday. There has been a lot of action on the Leek Springs Webcam. 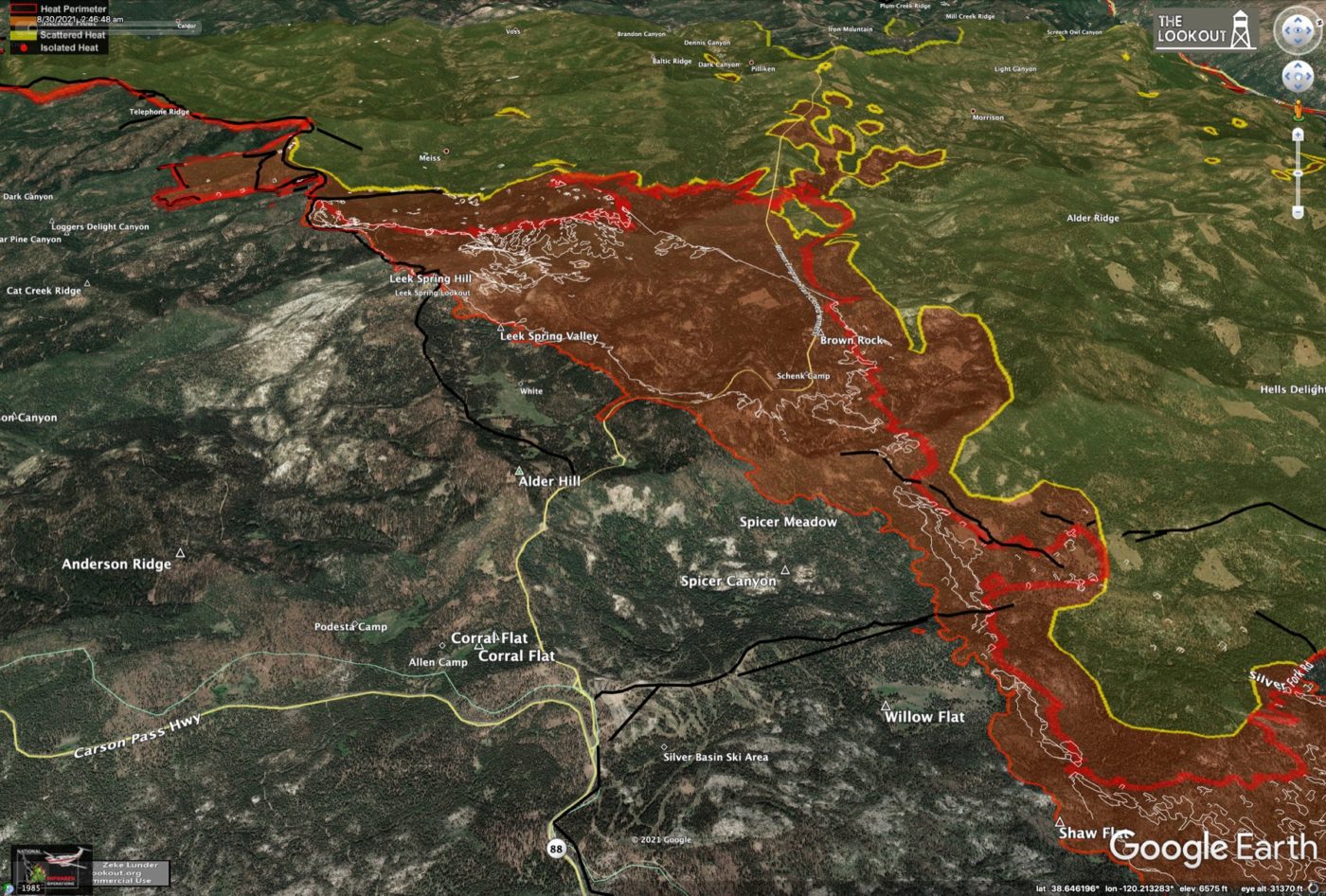 The southern edge of the fire has been quieter once you get west of Telephone Ridge. It looks like the large spot fire east of the ridge may have been halted. 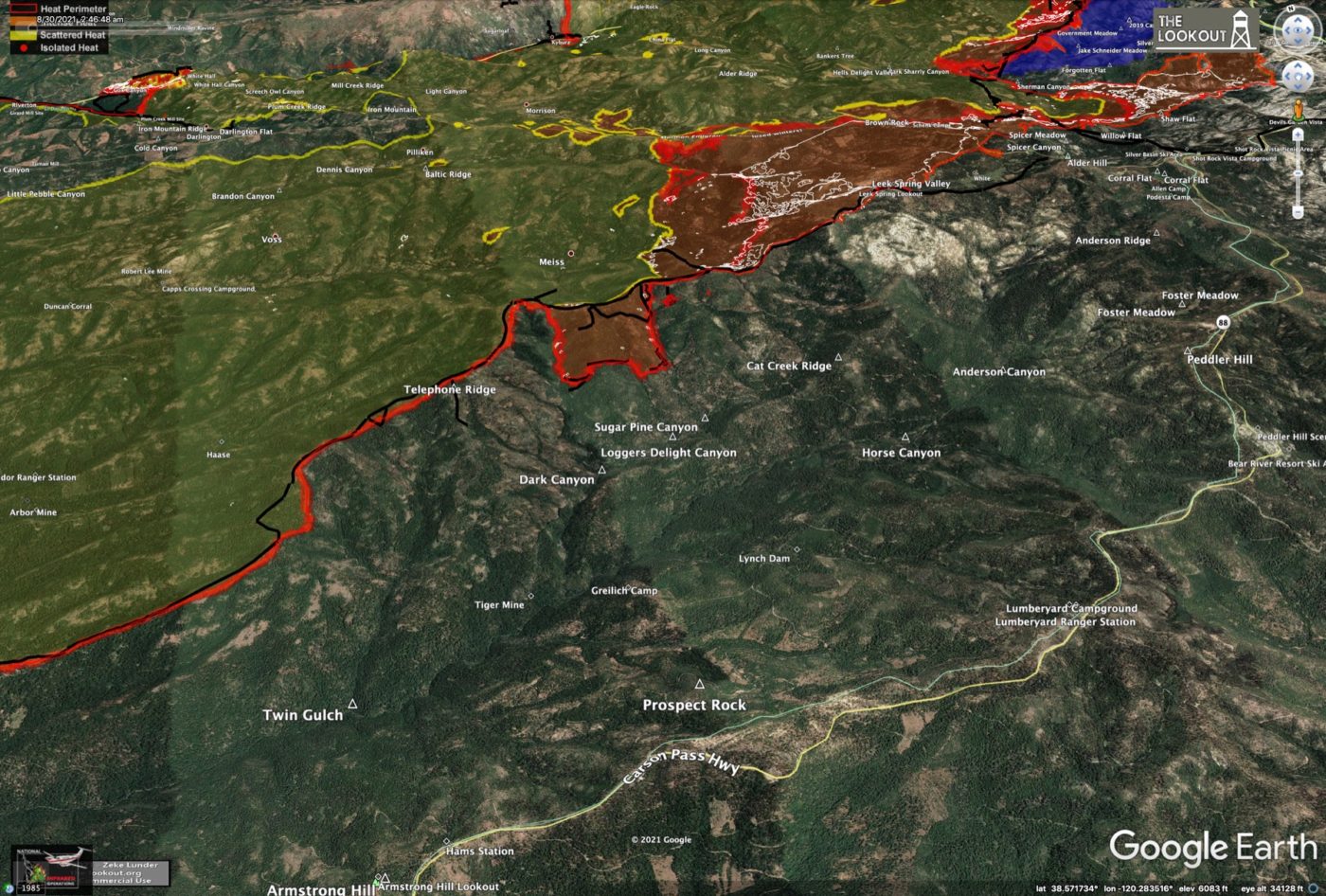 There is no new downcanyon spread showing in the Middle Fork Consumnes River. The only new activity on the western flank was some backing fire into Butte Creek where the fire spread out of Camp Creek over past several days. 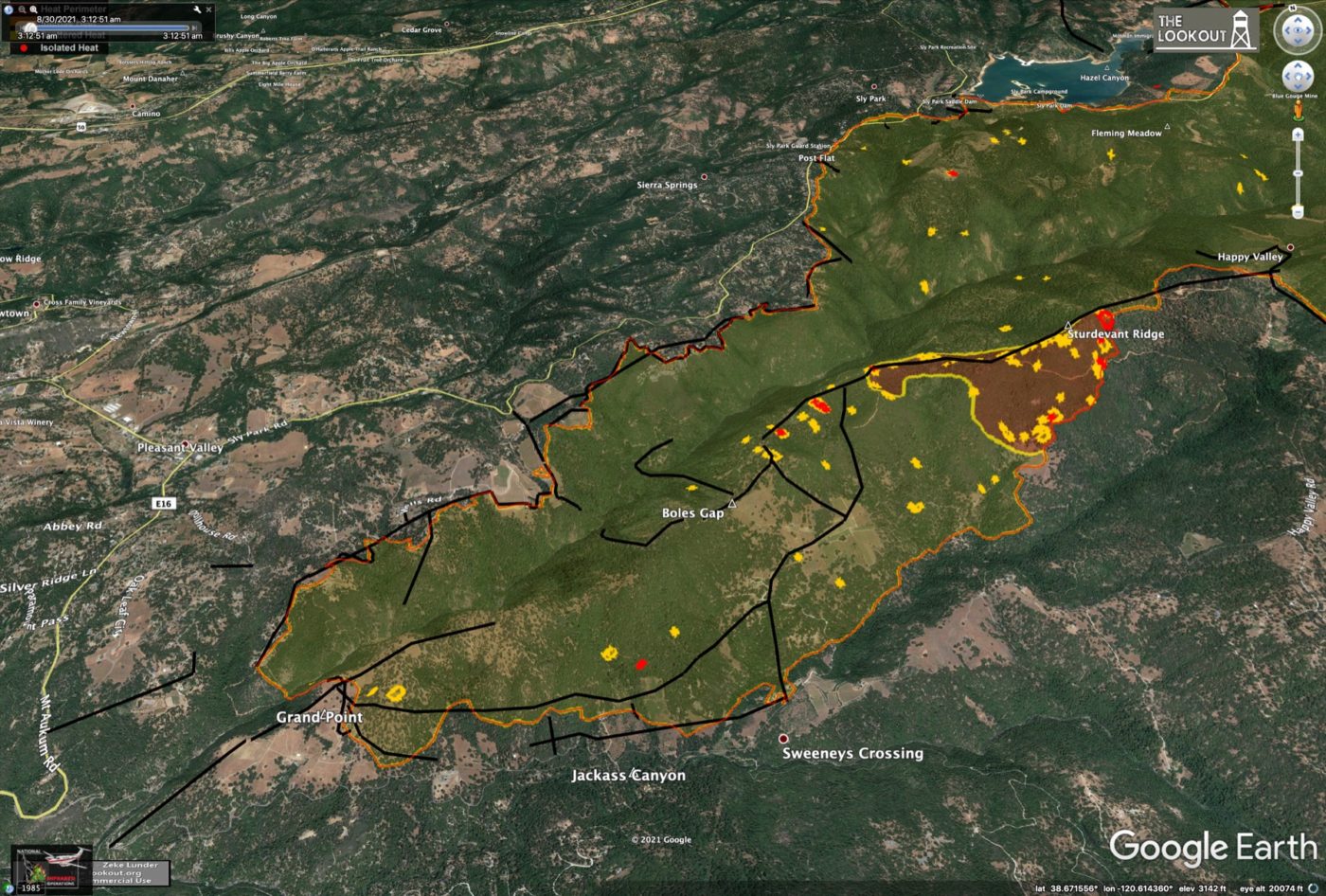 The Highway 50 corridor west of Kyburz has been fairly quiet. The fire continues to back actively downcanyon around White Hall. 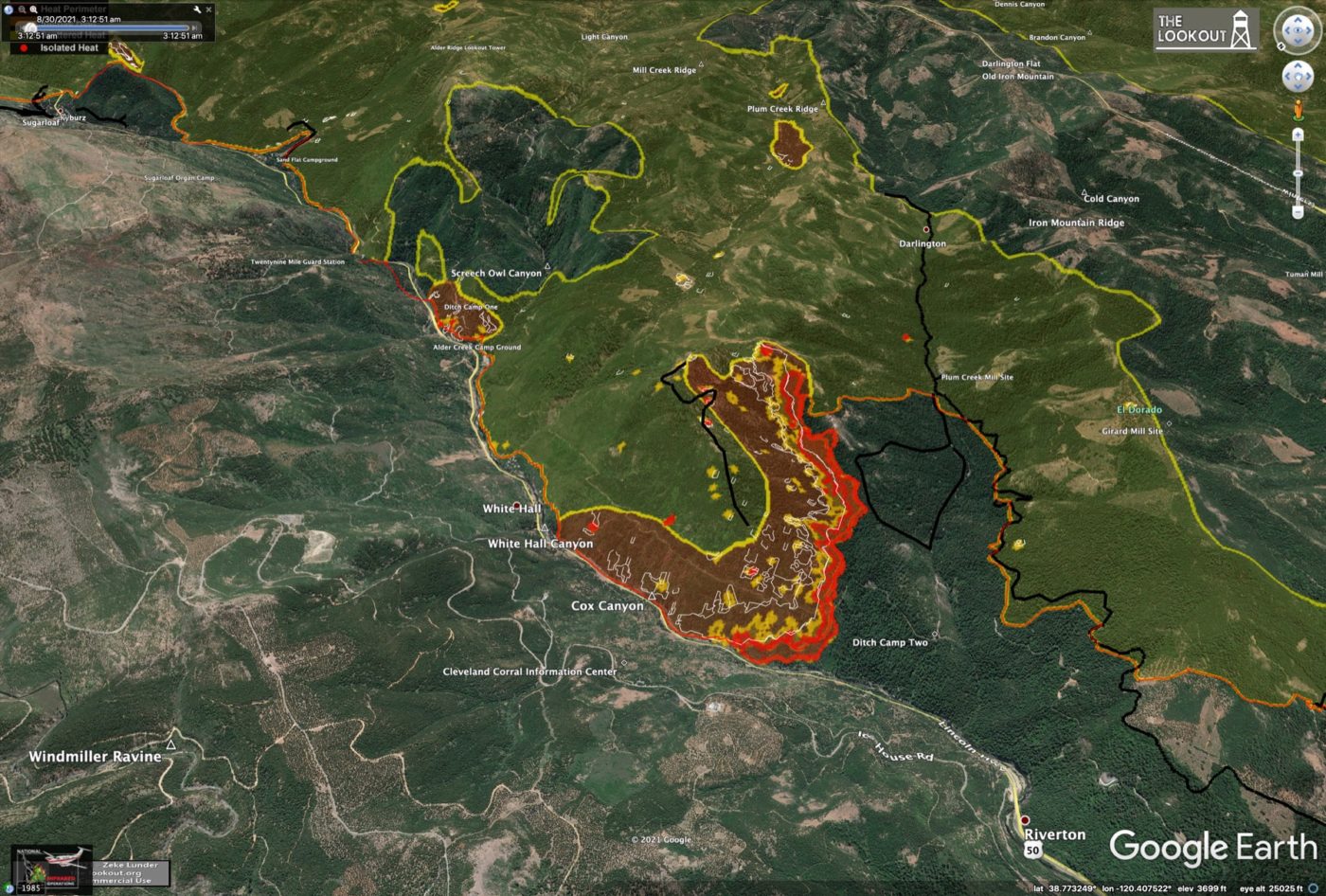 The north flank of the fire, east of Kyburz, has had minimal northward spread. 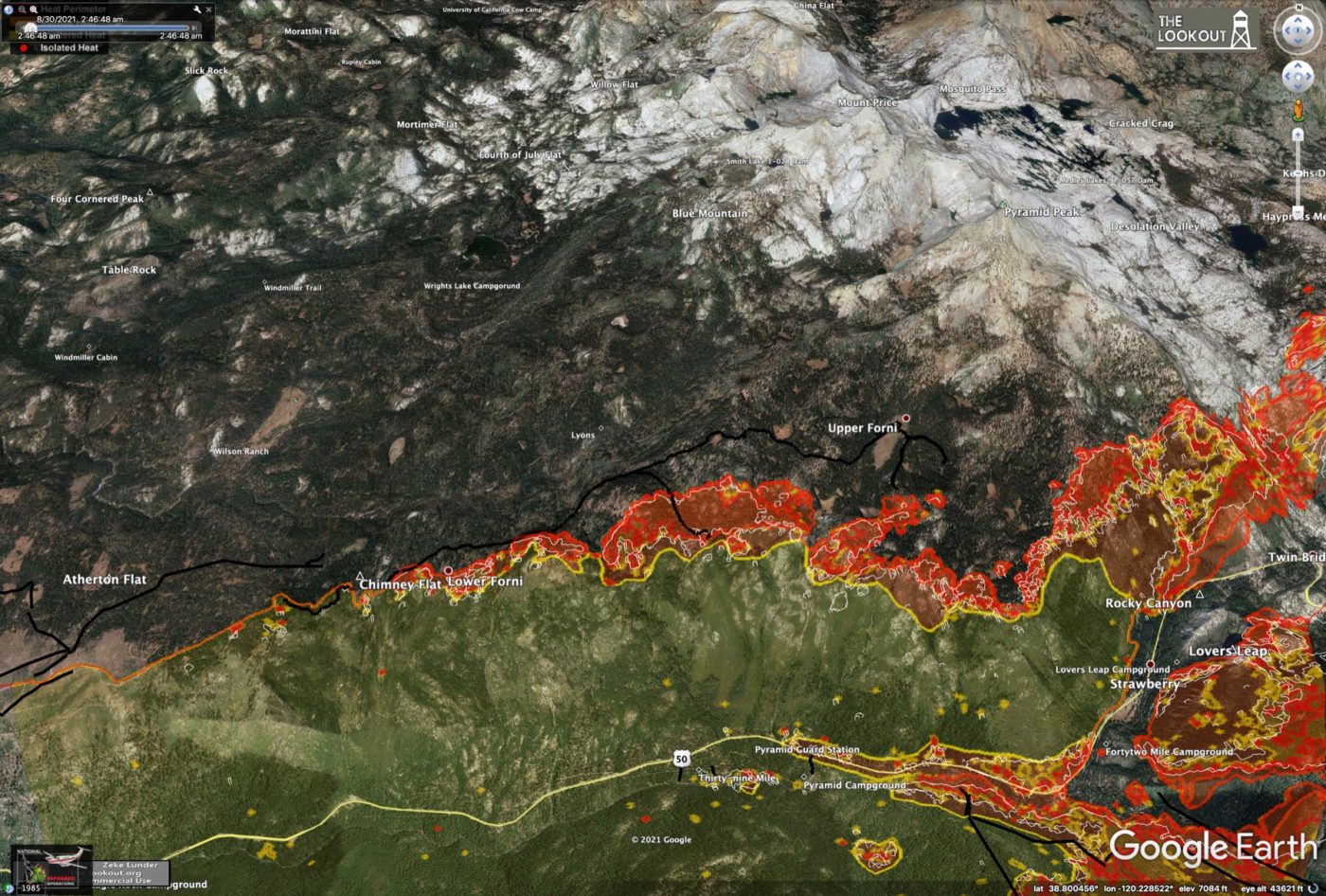 Yesterday’s big afternoon run had three separate heads. One on the north side of Highway 50, a second that ran through Camp Sacramento, and the third that headed southeast over the divide between Strawberry Creek and Sierra-At-Tahoe. 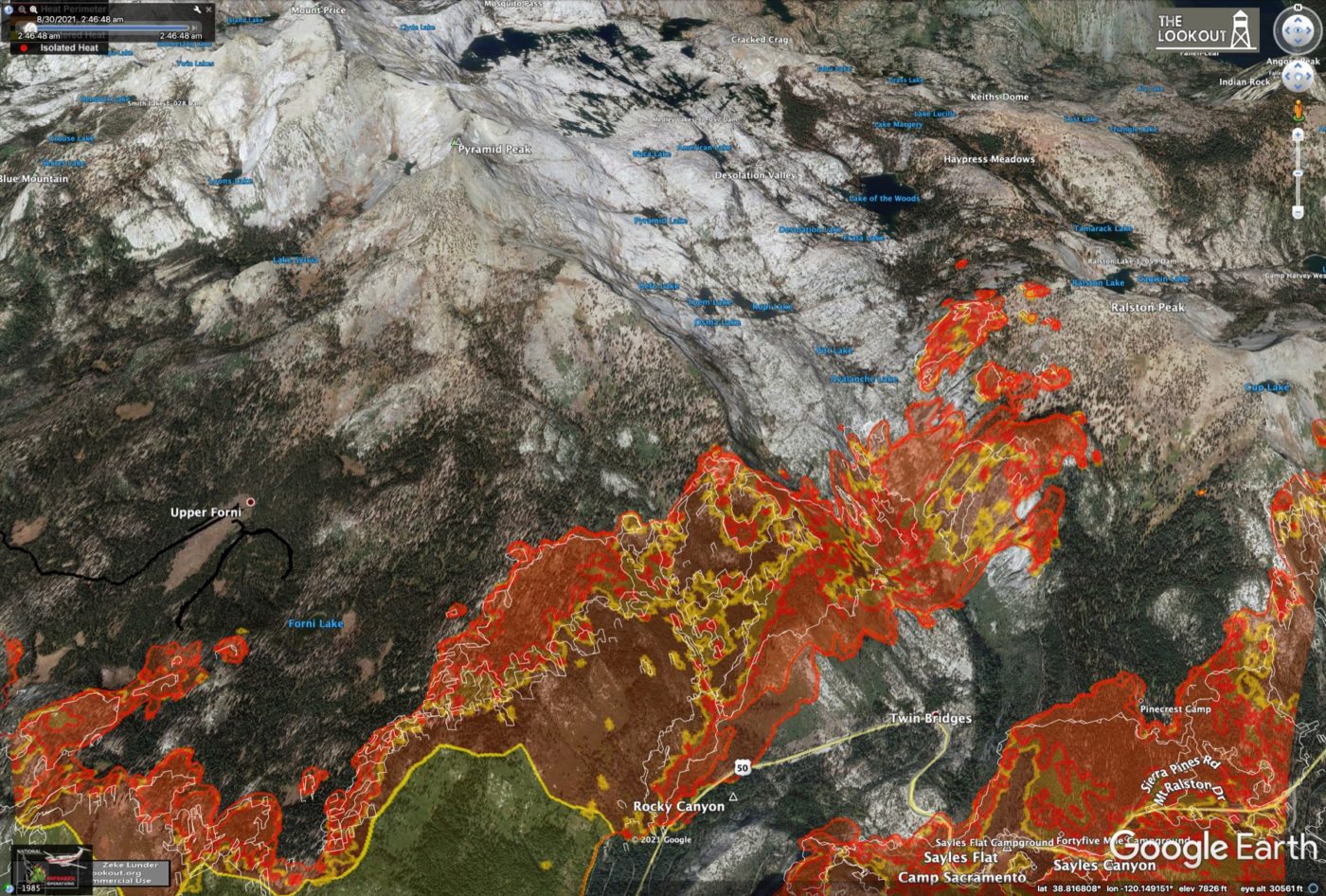 The northern head of the fire has spotted and found its way through sparse vegetation on the granite. 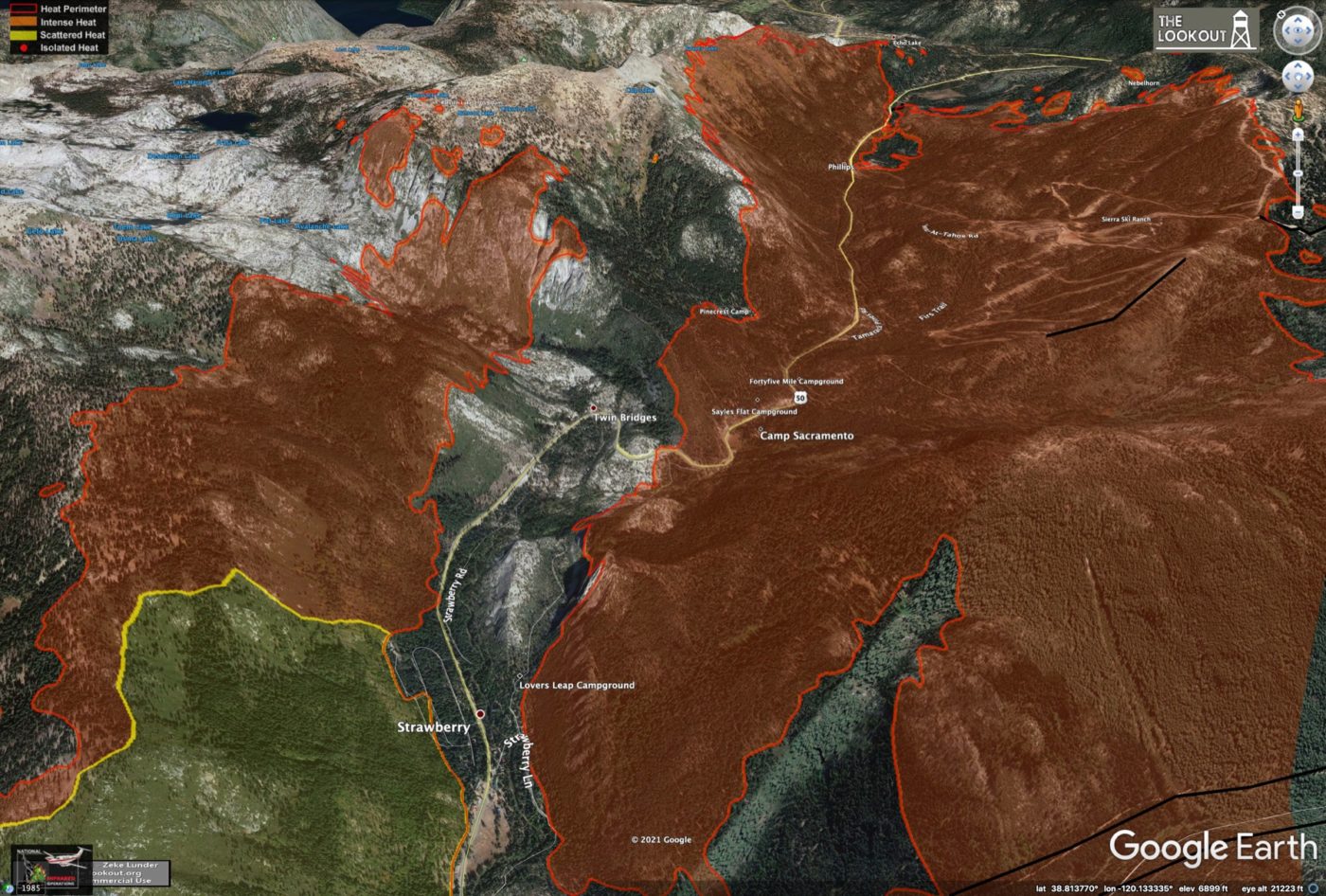 Once the middle head of the fire reached Camp Sacramento, the upcanyon winds were aligned with the slopes above, and this allowed for rapid fire growth. 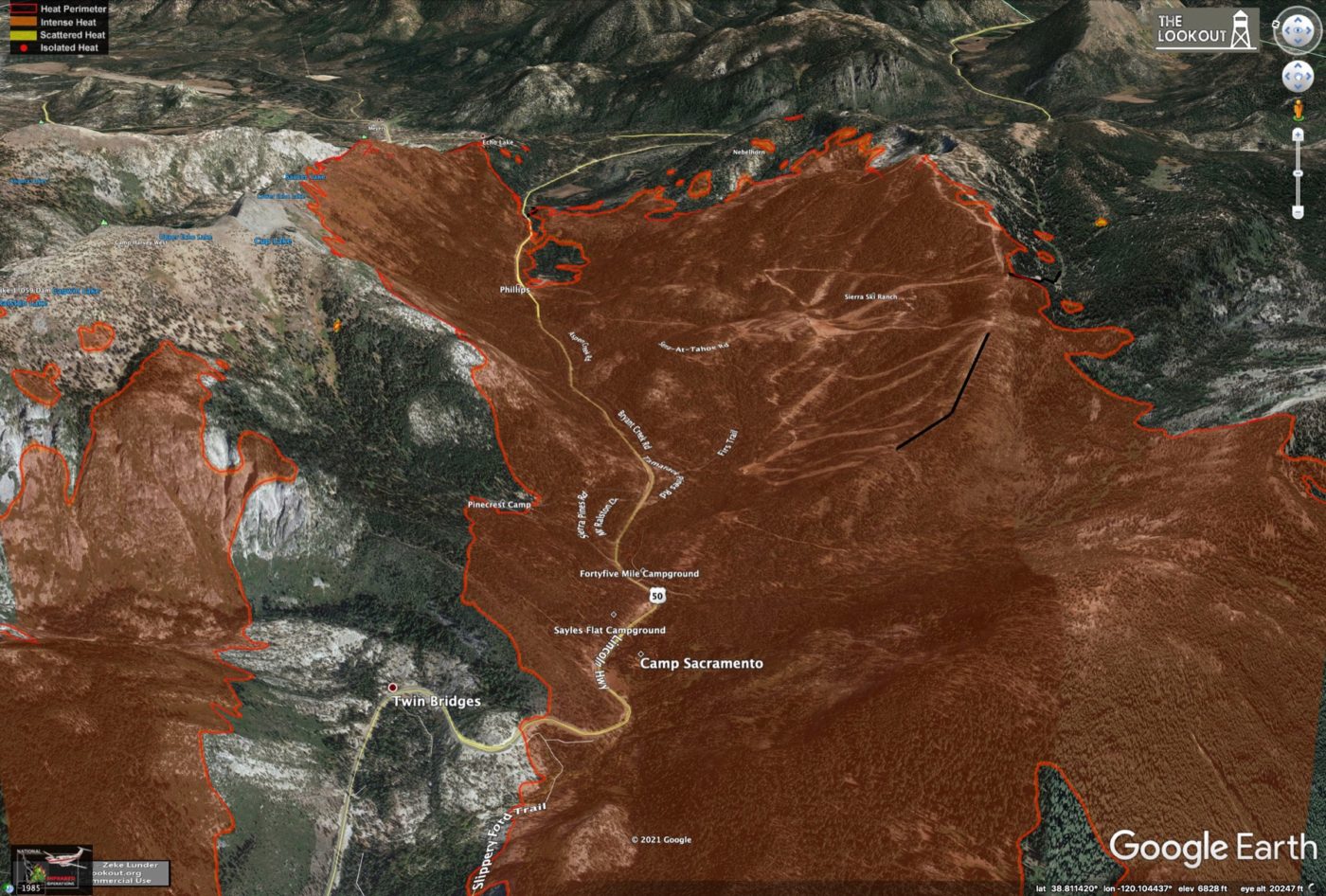 The southern head of the fire took off where the fire crossed bulldozer lines on the morning of August 29, heading over the ridge between Strawberry Creek and Sierra-At-Tahoe. It rejoined the middle head at SAT, burning through the resort area after 5pm. 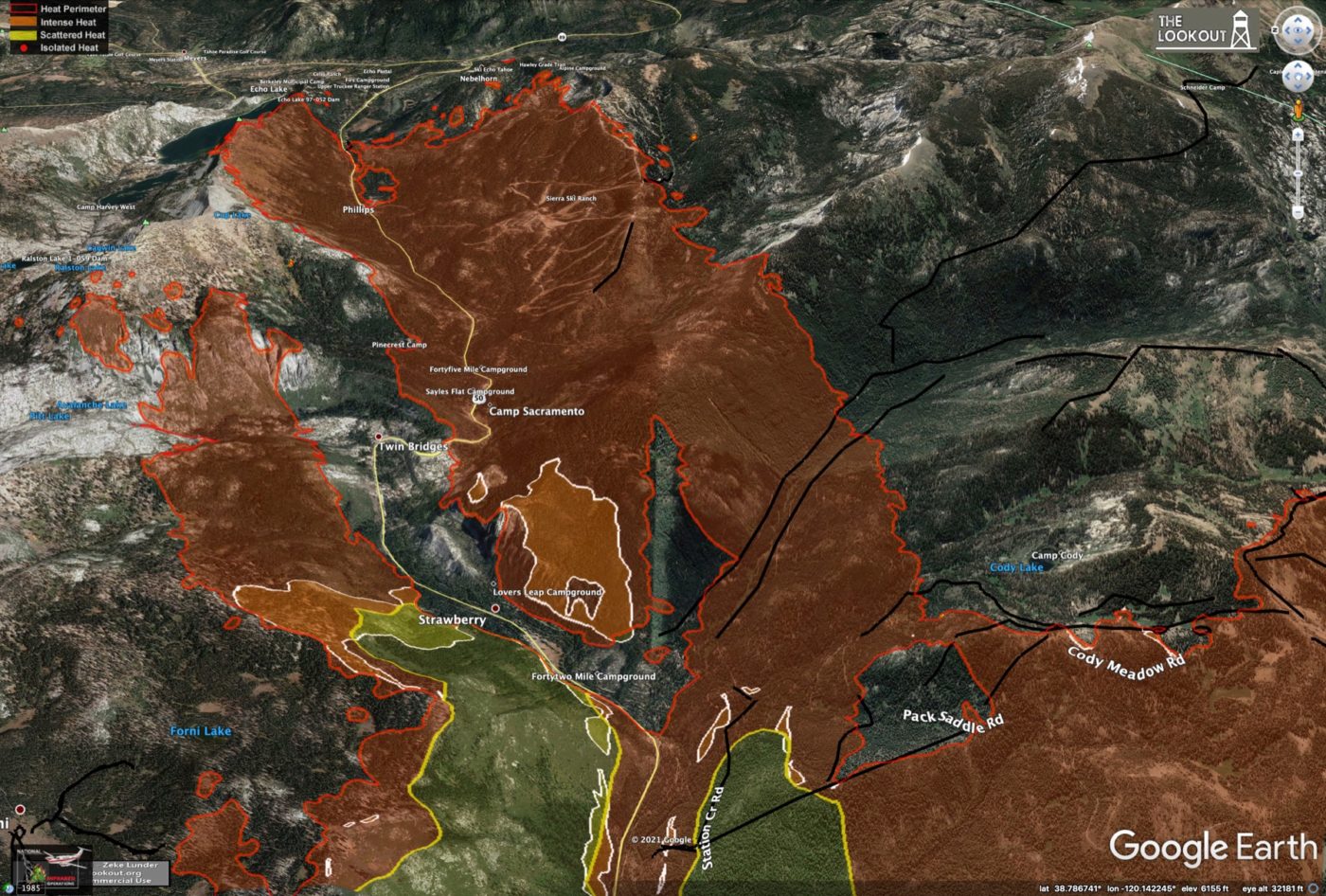 We’ll post updated maps on this same page as data comes in through the day. 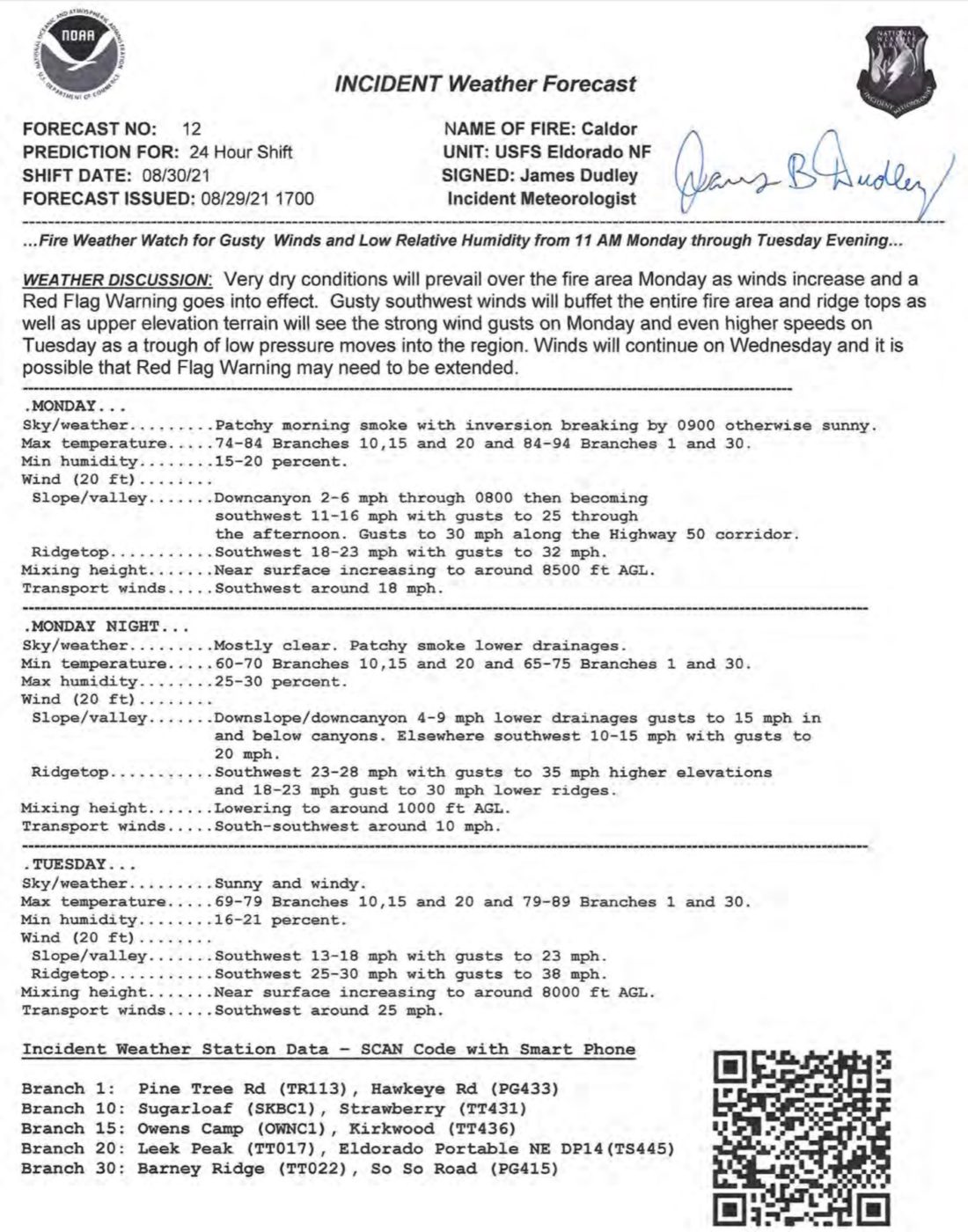 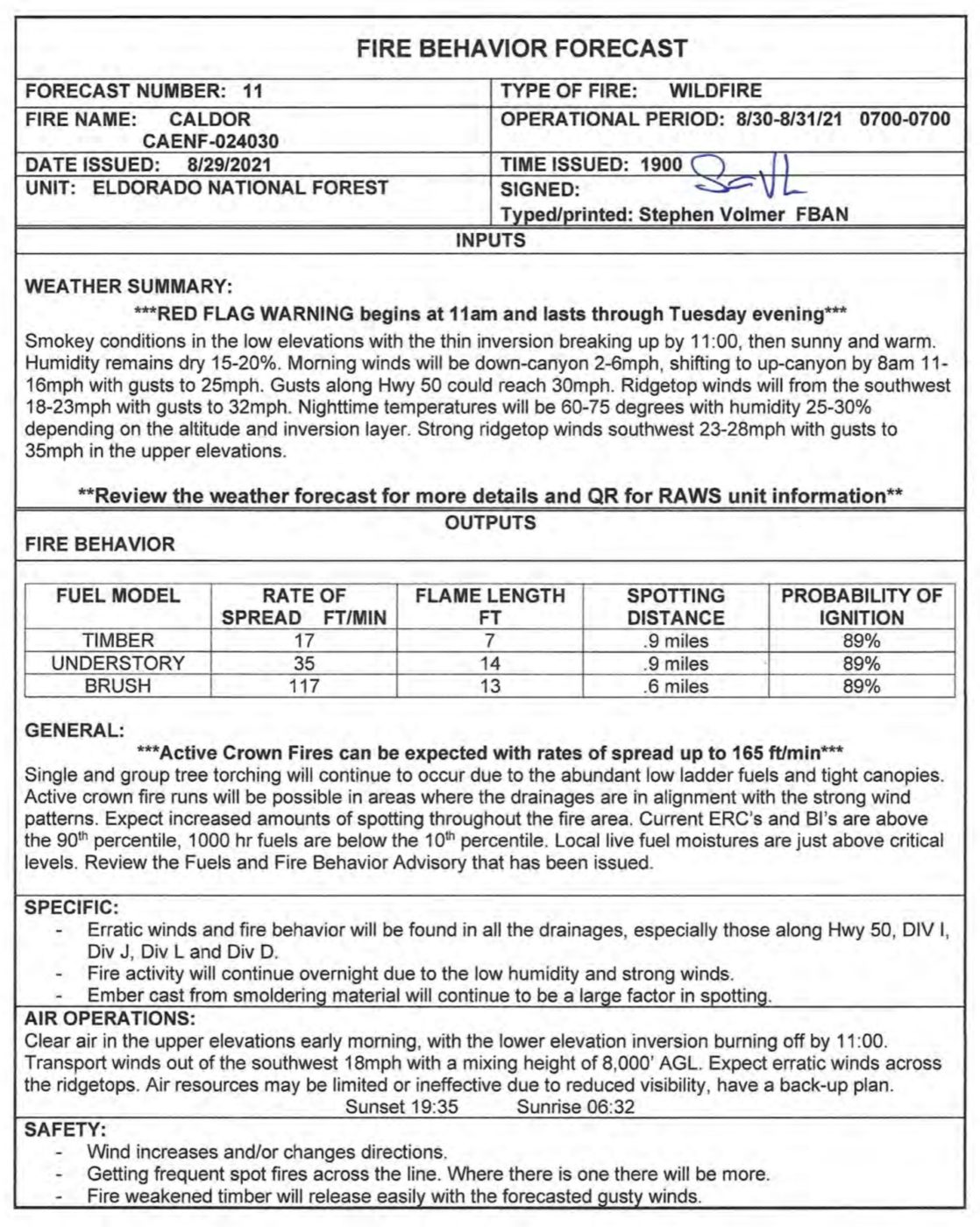