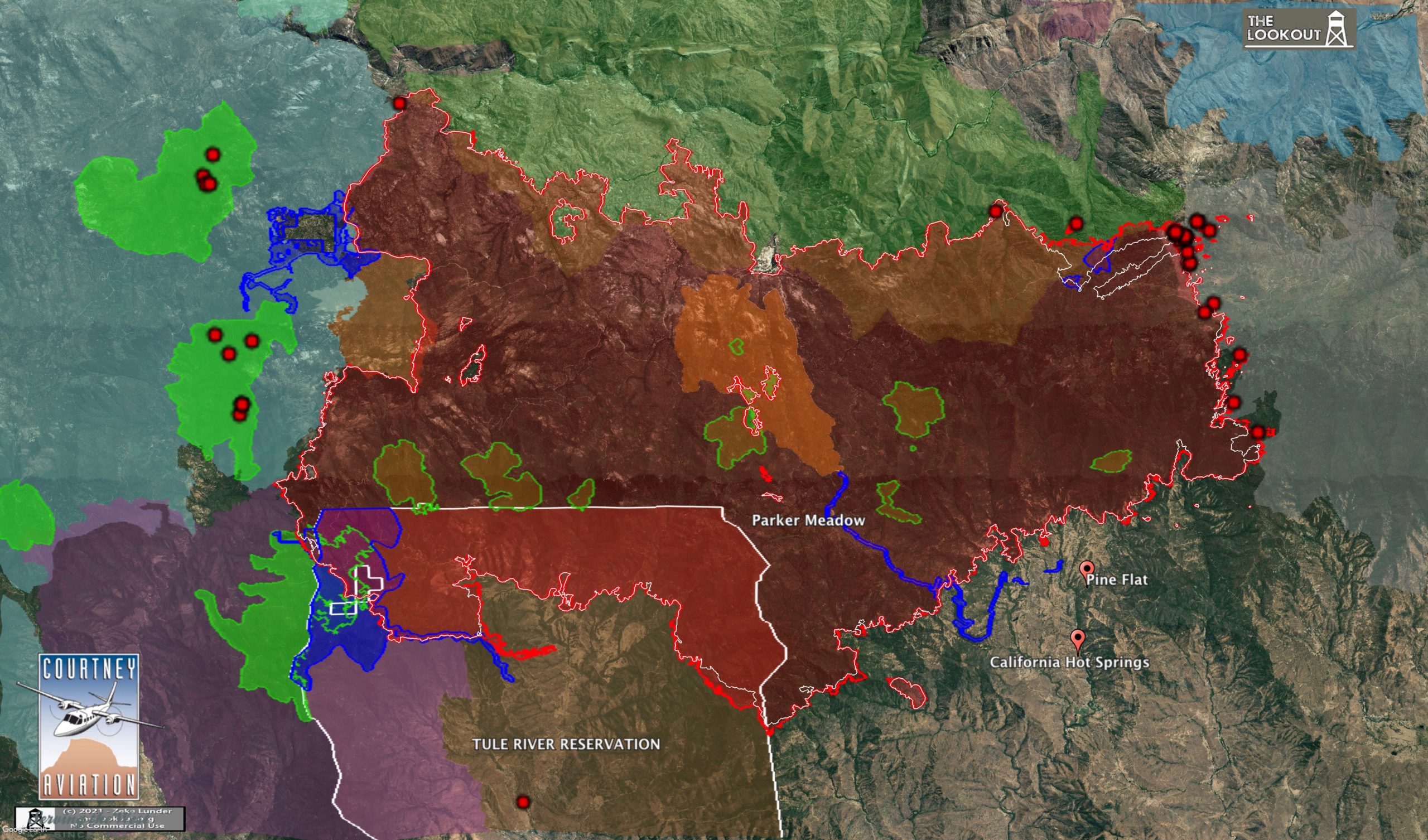 The following text is copied directly from a Facebook update posted by the Sequoia National Forest:

The Windy Fire is currently estimated to be 86,502 (a 1,119-acre increase from Monday morning’s reported acreage). Containment is 2 percent.

Gusty winds—25 to 35 miles per hour—were common and widespread over the fire area today. Southeast of the fire in Tiger Flats, a portable weather station has been installed, which is providing valuable data to the incident meteorologists and fire-behavior analyst. The station recorded several instances of gusts over 40 miles per hour today.

Although they had windy conditions to contend with, firefighters benefited from the slightly moderating effect that today’s cooler temperatures and higher relative humidity levels had on fire behavior.

On the northwest side, crews were able to continue the firing operation, making significant progress southward toward Wheatons. They got out in front of the main fire near the South Fork Tule River, slowing its westward advance into the Tule River Indian Reservation. Ground crews were supported by helicopters that conducted water and retardant drops. Tonight’s winds will be favorable in that area, pushing the fire into itself.

On the north side of the fire near Peppermint, there were some hotspots outside the fireline. Crews constructed dozer line around them, and they are attempting to use direct fire-suppression tactics in that area. The east side of the fire had less fire activity and growth today than other areas. Firefighters are extinguishing hotspots along the fireline and well into the burned area.

The fire remains very active on the southeast and south sides between Baker Peak and Tobias Peak. It has bumped into the 2016 Cedar Fire scar, where airborne embers and firebrands are landing and starting spot fires in the snag patches. Heading west along the southern perimeter, crews are using a network of roads to comprise the fireline and implementing direct fire-suppression tactics as often as they can. Firefighters are also in a structure-defense posture in Sugarloaf,  Pine Flat, and California Hot Springs.

The most significant weather concern tomorrow will once again be the strong winds associated with the cold front. Sustained, 20 to 30 mile-per-hour winds are expected across much of the fire area, with the south side getting hit harder by 30 to 40 mile-per-hour winds. Relative humidity levels be higher, though, with the west side benefitting the most: 55 to 75 percent on the west and 35 to 55 percent on the east. Snags—standing dead trees—are abundant in the vicinity of the Cedar Fire scar, and they present a significant hazard and challenge to firefighters.

Firefighters will have some opportunities, though. The fire behavior analyst has advised that with higher humidity taking fine fuels, such as grass, out of the fire-spread equation, the fire will advance mainly from log to log. The large trees and logs that are currently burning will carry the fire. Crews have an opportunity over the next couple shifts to break that chain of fire spread in many areas. A lot of active fire remains on the landscape, but firefighters are feeling more optimistic with the reprieve in some weather conditions and the progress they’ve been able to make in the last couple days.

LOOKOUT MAP KEY: Giant Sequoia Groves are Shaded GREEN. The white line near the KNP perimeter helps to discern roughly 24 hours of fire spread to the outer red line of the perimeter.

Overview of past 24 hour fire growth. 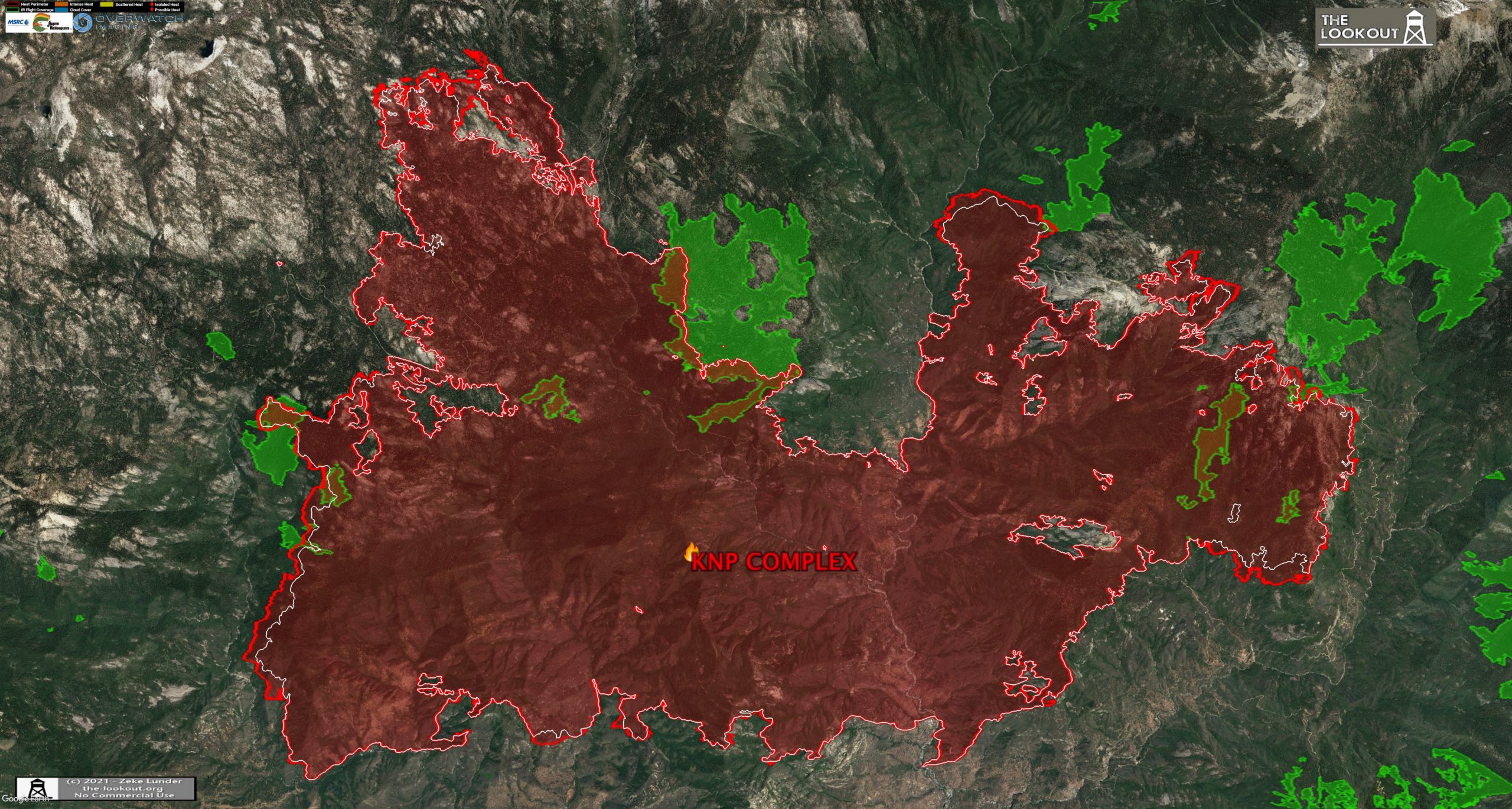 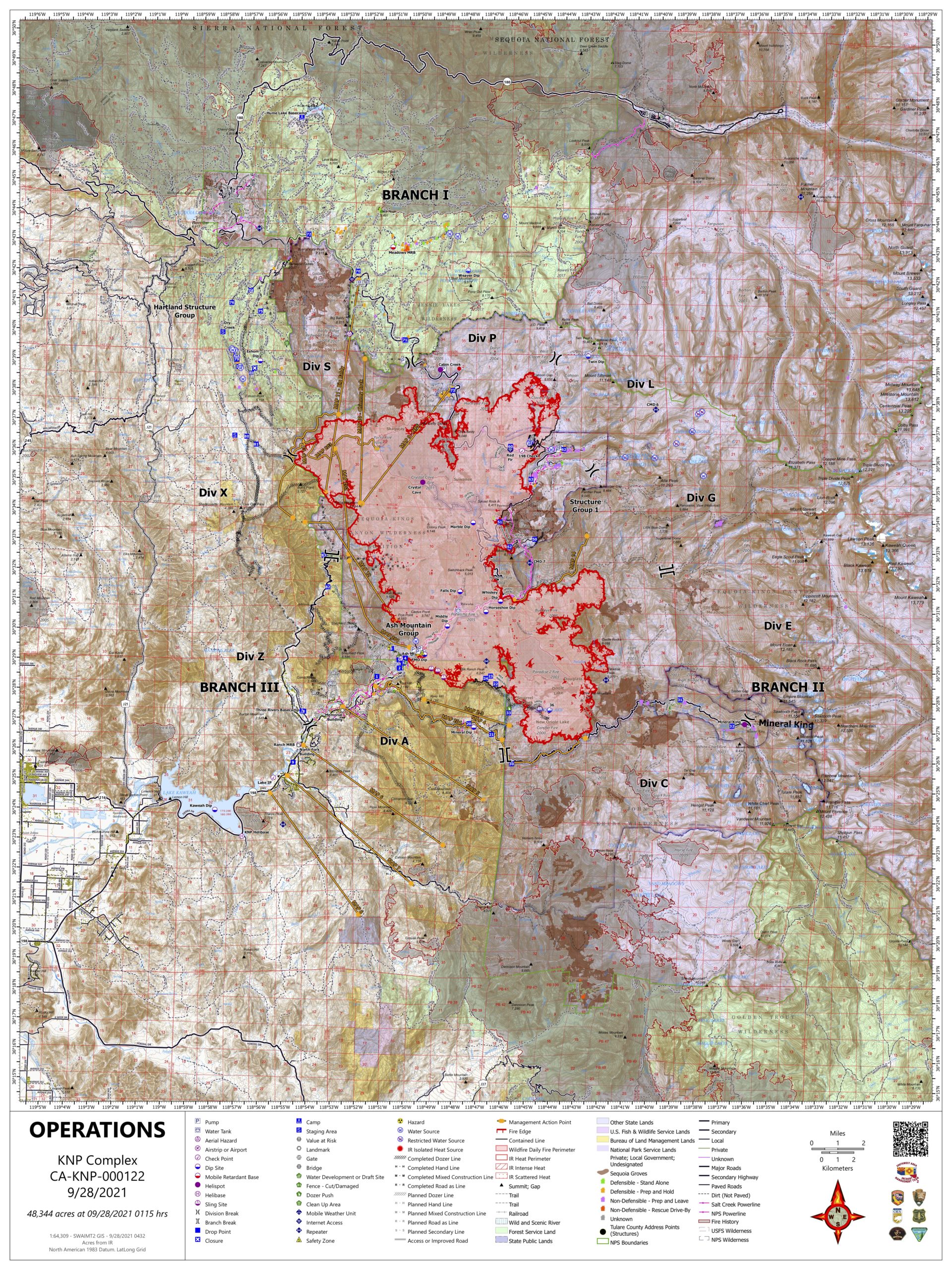 *** 5pm, September 27 – The following story describes a successful firing operation within the (so called) “Muir grove”.

Yesterday (9/26), firefighters hiked into the Muir Grove of giant sequoias located within Sequoia National Park to look at what pro-active actions they could take to protect the grove from high-intensity wildfire as they battle the KNP Complex.

They observed that the fire had backed into half of the eastern edge of the grove meeting the edge of the Muir Grove Trail. Due to the amount of smoke, air assets were not an option.

In coordination with the Parks’ Fire Management Program, firefighters strategically dotted the area with low-intensity fire in the grove to eliminate extreme fuel loading, reduce the fire’s overall intensity, and rate of spread; much like we do during a prescribed burn.

At the time of this writing, it is our understanding that due to these actions, no extreme fire behavior was observed. We are grateful for the work and coordination to help protect this iconic giant sequoia grove. 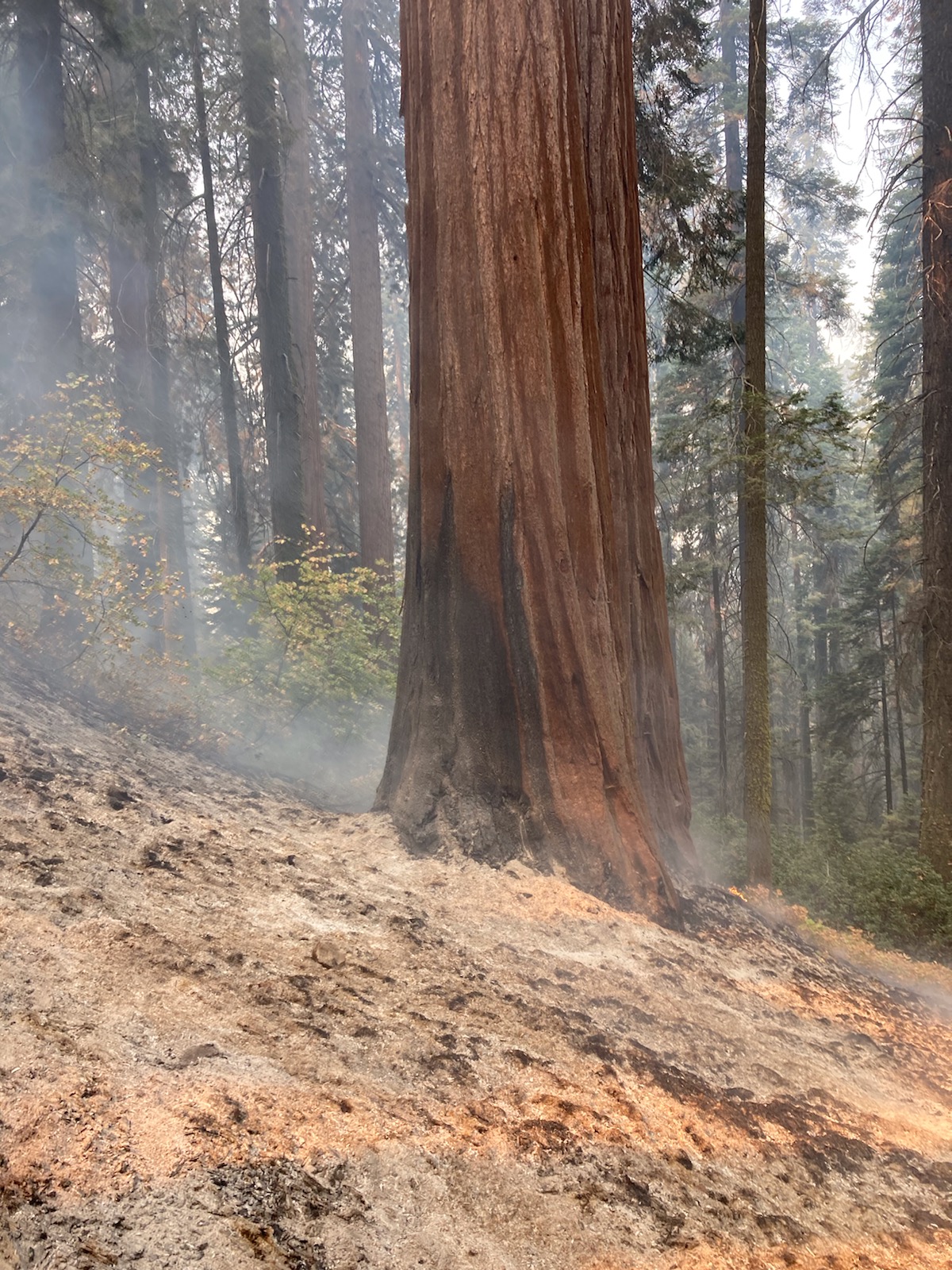 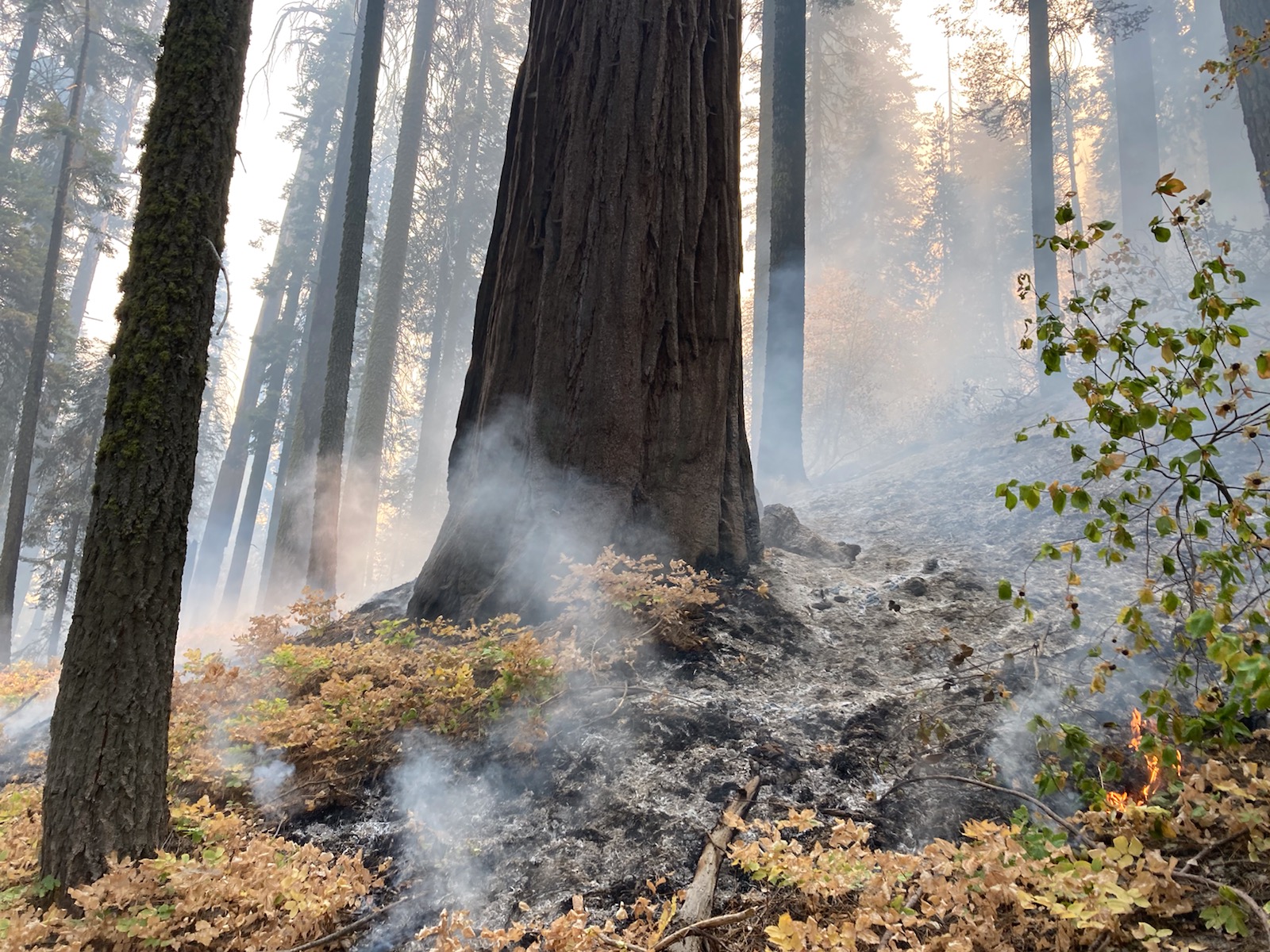 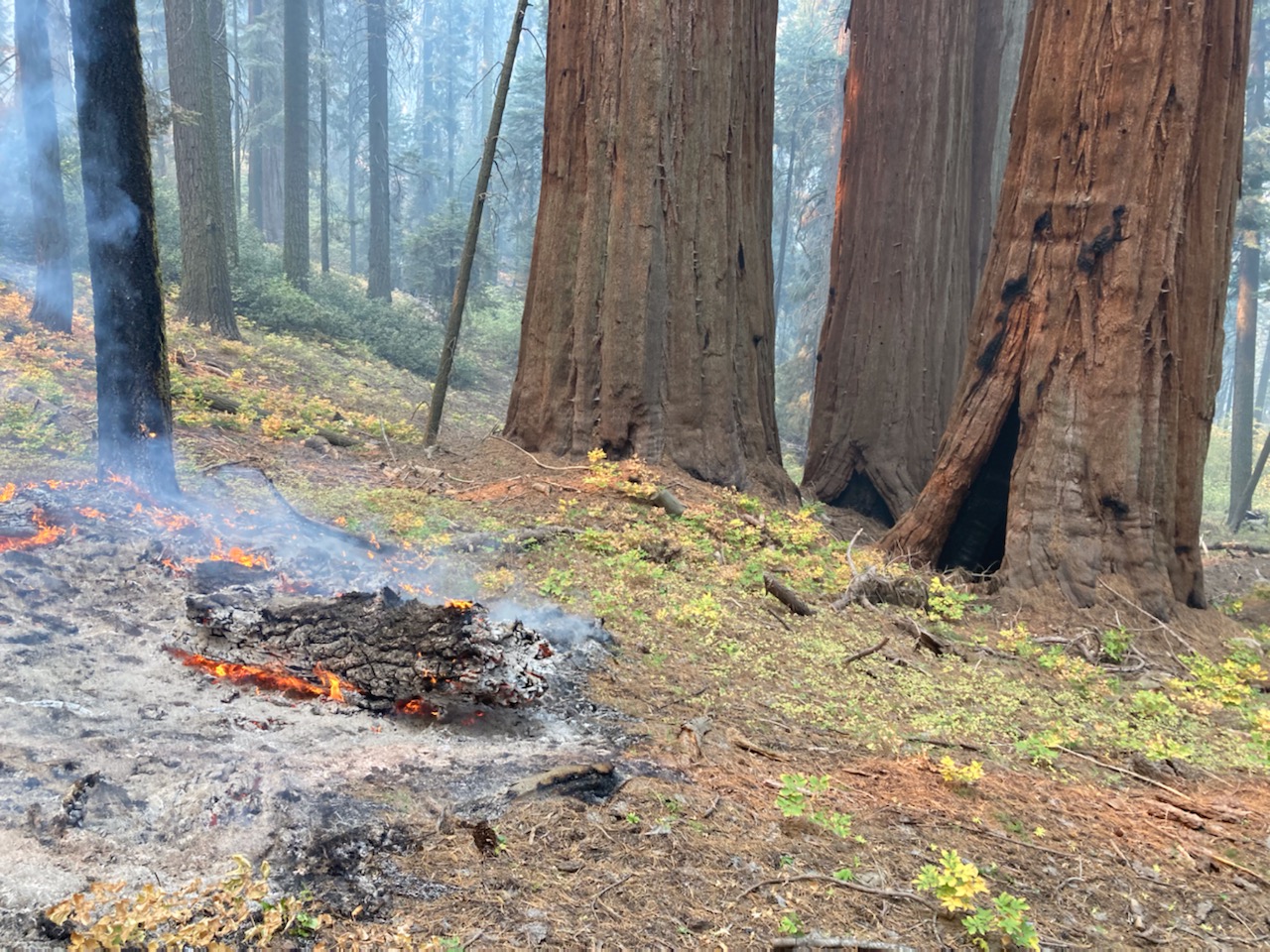