KNP Complex Fire Announcement: Ground and air resources are currently responding to a 500-600 acre spot fire that has crossed the north fork of the Kaweah River, approximately two to three miles southeast of Eshom Point. Updates will be provided as information becomes available.

Looking northwest near where the spotfire has been reported. Hopefully we’ll have more intel in the morning: 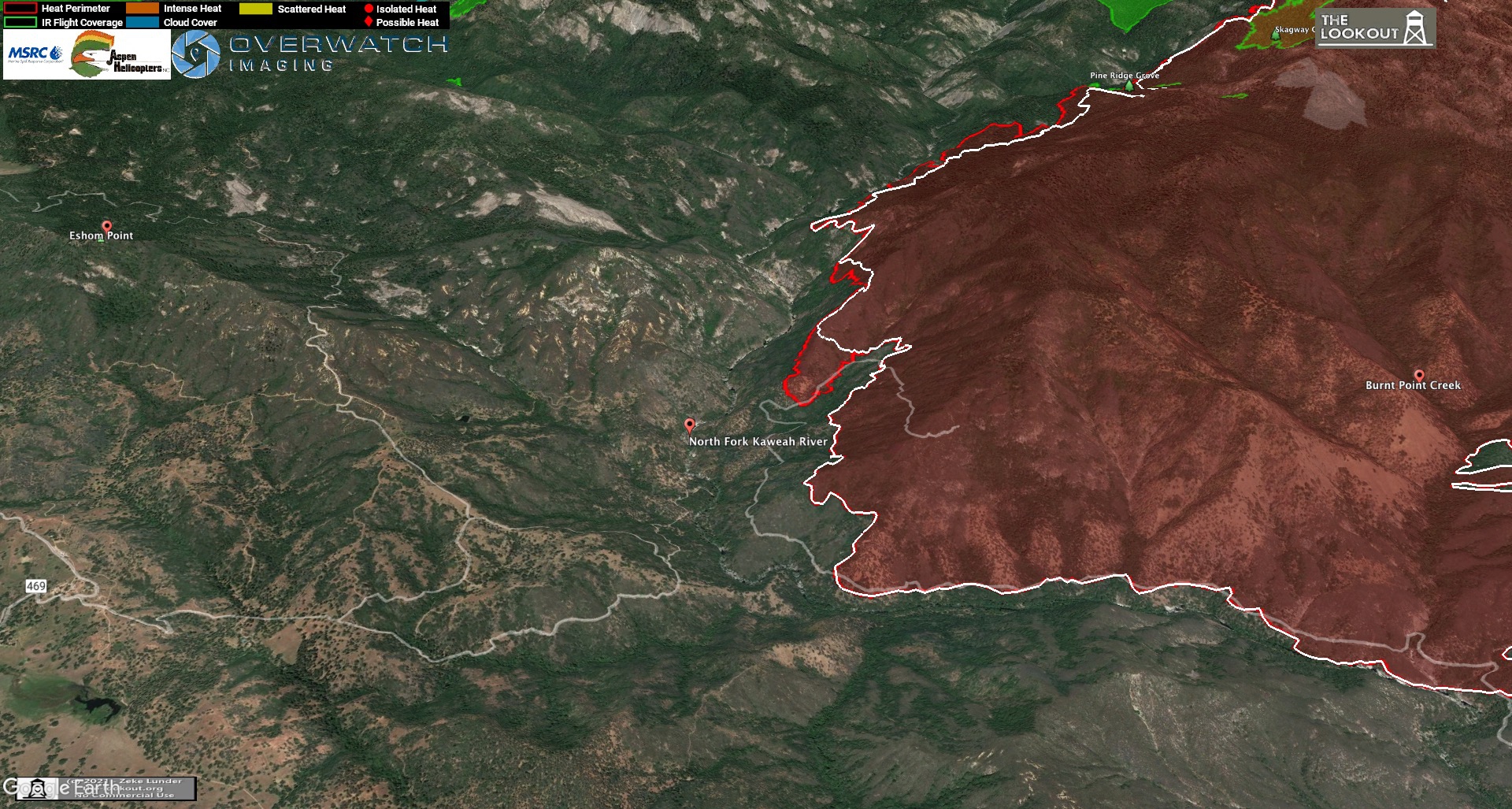 No new IR and the VIIRS haven’t hit yet today. Based on yesterday’s information my eyes would be on the Gordon Hill/Bear Creek area where the ridge lines are running parallel to the intended path of the fire, limiting options for line cutting.

Another concern is the east flank of the fire in the light, flashy fuels of the McNally scar. Those fuels will be much more available now and into the week than they have been over the last couple of days.

The Windy Fire is currently estimated to be 88,068 acres (a 167-acre increase from Wednesday morning’s reported acreage). Containment is 31 percent.

Fire behavior was moderate today. Along the eastern perimeter, firelines are holding from the Ponderosa south to Johnsondale. In the M99 corridor between Johnsondale and Baker Point, there are a few places where the fire continues to be more active, although it did not grow much. Crews are unable to directly suppress the fire there, so they are looking at various indirect fire-suppression options, for example, using helicopters to conduct bucket drops.

On the fire’s south side, where the numerous spot fires are, crews are constructing fireline around and suppressing the isolated fires individually. On the western side of the fire, crews are also able to directly suppress the fire in many places. Clear skies allowed numerous helicopters to assist firefighters on the ground with water drops.

The livestreamed public meeting will be starting at 7 p.m, and you can get much more detailed information then. The video will be available afterward if you’re unable to attend live. Watch last night’s Sequoia National Forest Windy Fire update video here.

KNP Complex continues to burn actively along the North and Middle Forks of the Kaweah.

Along the North Fork, near Muir/Pine Ridge Groves, this morning’s IR shows intense heat as the fire backs down to the North Fork. The Pine Ridge Grove is mostly north facing, this may reduce fire impacts in that location.  Some parts of the Muir Grove face west and are a bit steeper, so fire extension there may be an issue.  With a short hop across the river to new fuel, the North Fork of the Kaweah from here back down towards Three Rivers will be an area to watch as weather continues to warm through the week.

North of the Castle Rocks, on the south bank of the Middle Fork, new heat and spread was also seen.  The Castle Grove is on well shaded, north facing ground.  However the terrain is extremely steep and the canyon somewhat narrow.  Elevations here change quickly from the river at just over 4,000 feet to the tops of the grove at nearly 7,000 feet.  With forecasted temperatures in the 50s-70s and relative humidity in the teens, timing is poor for the introduction of a head or flanking fire into the grove this week.