Since this morning’s mapping, around 2:30am, there has been about a mile of spread to the east on both the spot fire near Kyburz and the main head of the fire. Also, the southeast flank continues to spread actively, especially in areas north of Mormon Emigrant Trail and the Silver Fork Canyon. There is continued firing and firefighting in Camp Creek, downstream of Sly Park Dam, and new spread downcanyon in the Middle Fork Consumnes River, west of Slug Gluch.

The newest available mapping is from 3pm today. 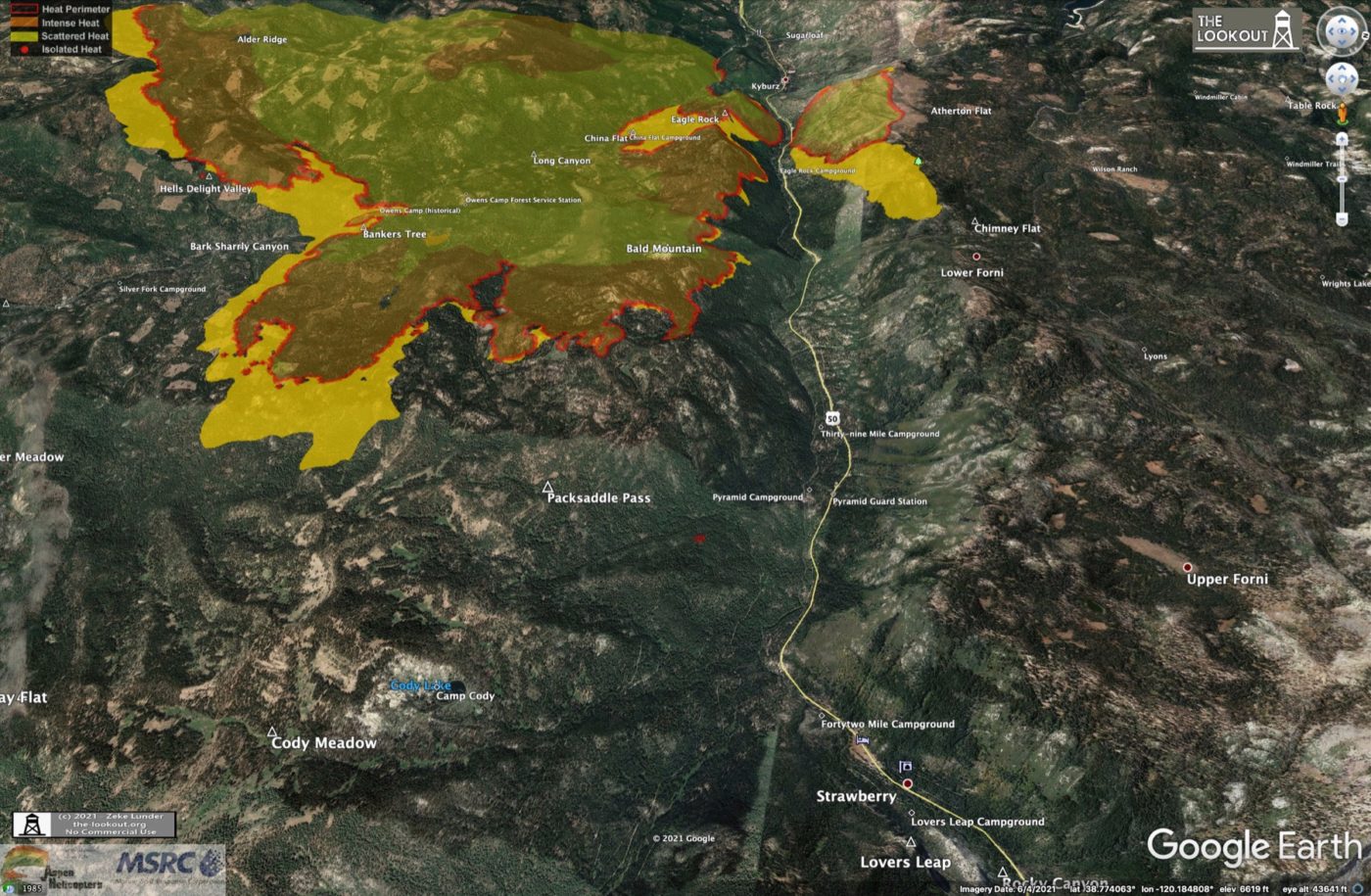 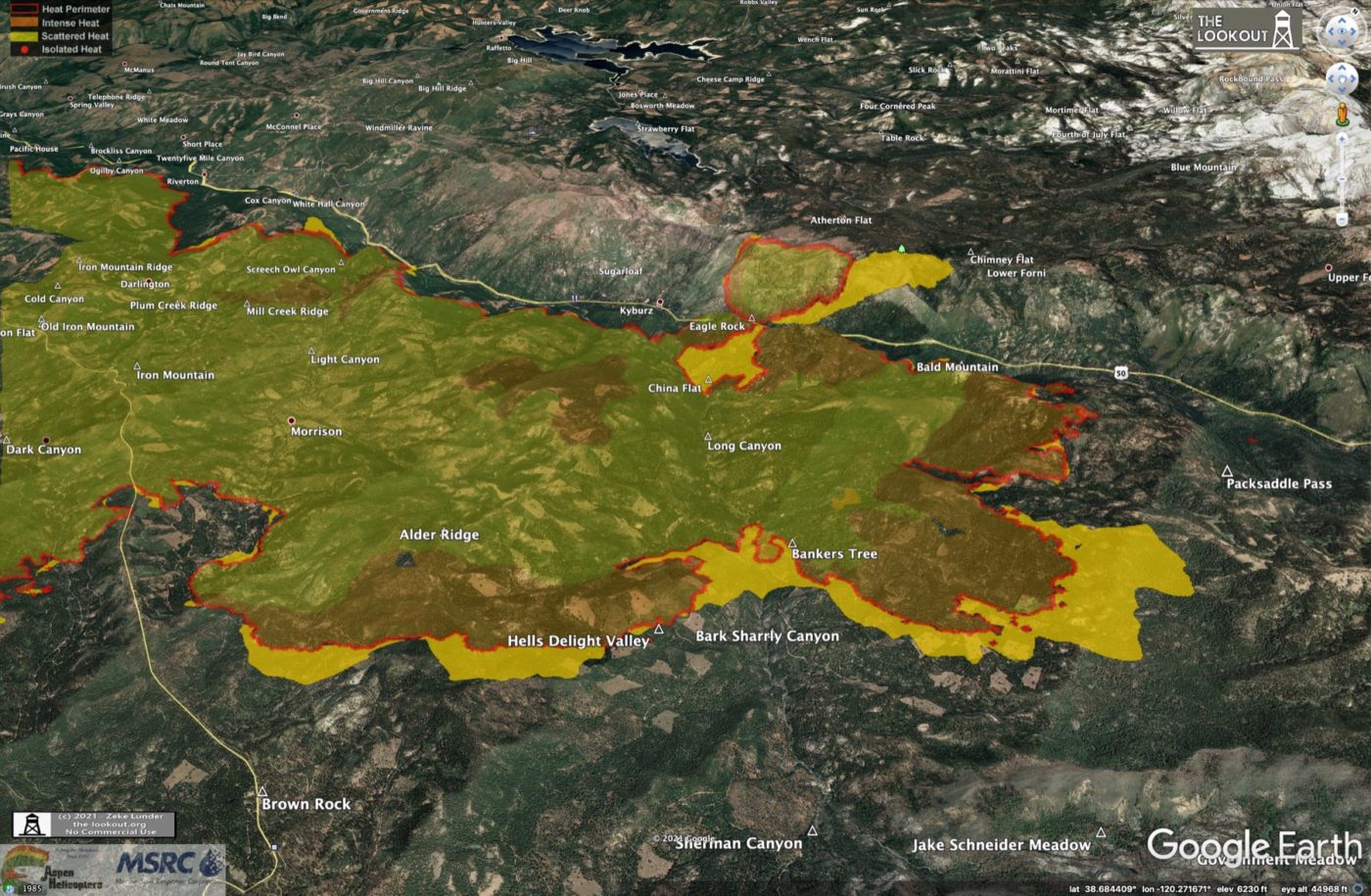 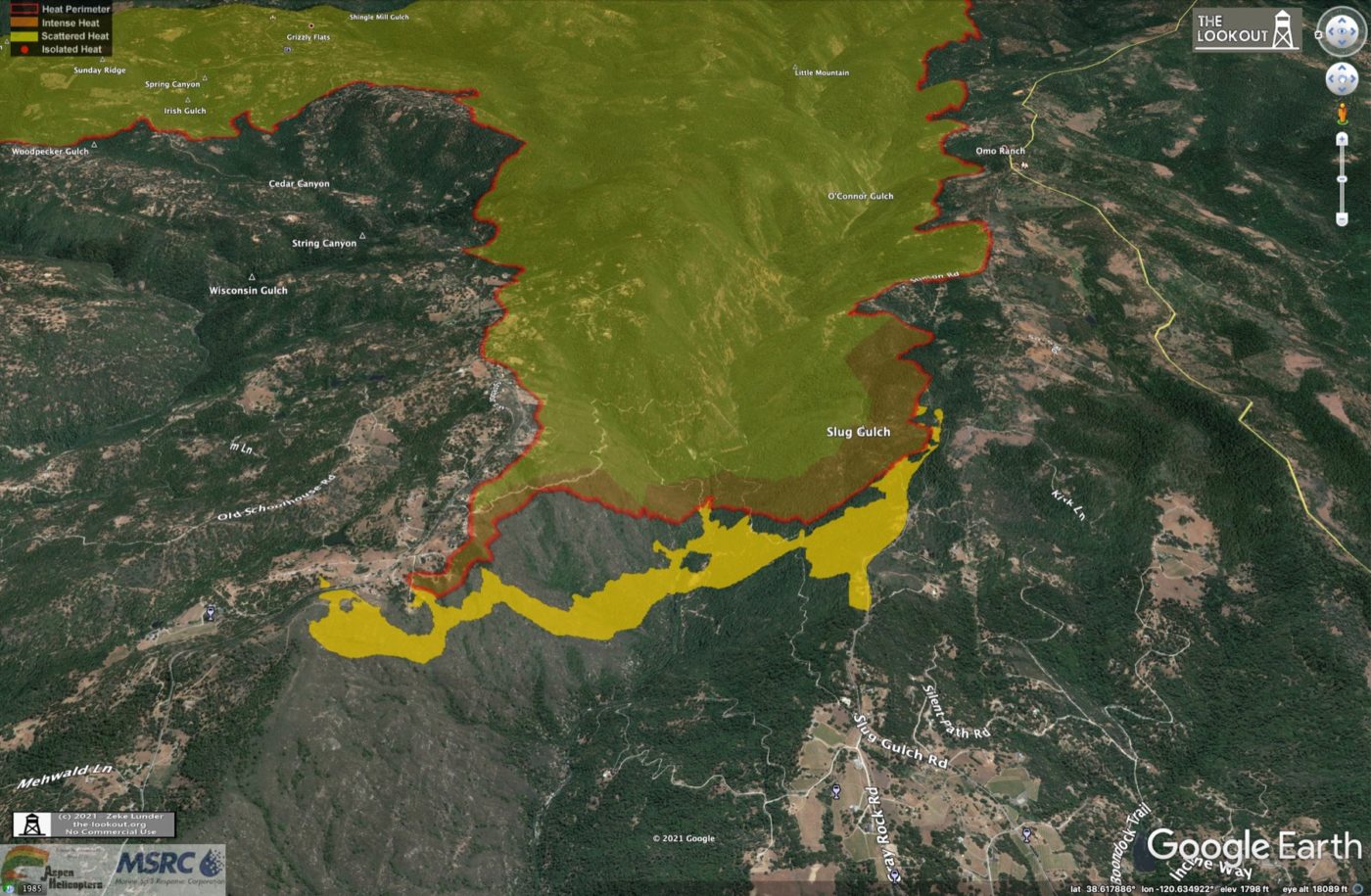 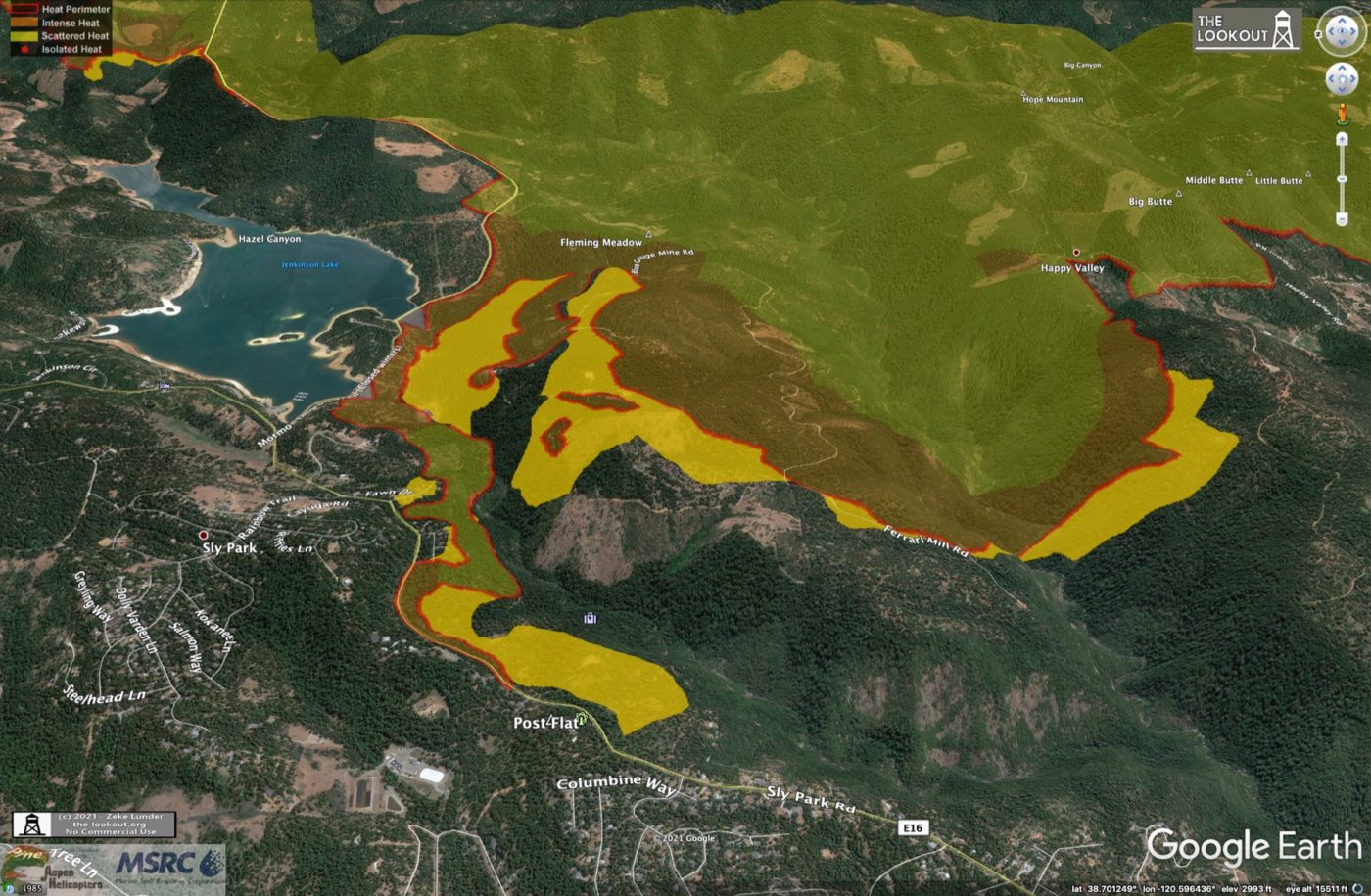 Yesterday was an active day on many parts of the Caldor Fire. There were major runs along the southeast flank, and new runs to the east caught up with the big August 21 run, broadening the head of the fire to about four miles wide.

To read a very detailed situation status update written by the CAL FIRE incident management team in charge of the fire, click here.  Detailed weather and fire behavior forecasts at bottom of this page.

The first two maps are from the Incident Command Team’s Mapping shop.

This is the pilot’s map. There is a lot of useful info in this map if you are following the fire with an online scanner and trying to figure out where all the different branches and divisions are. 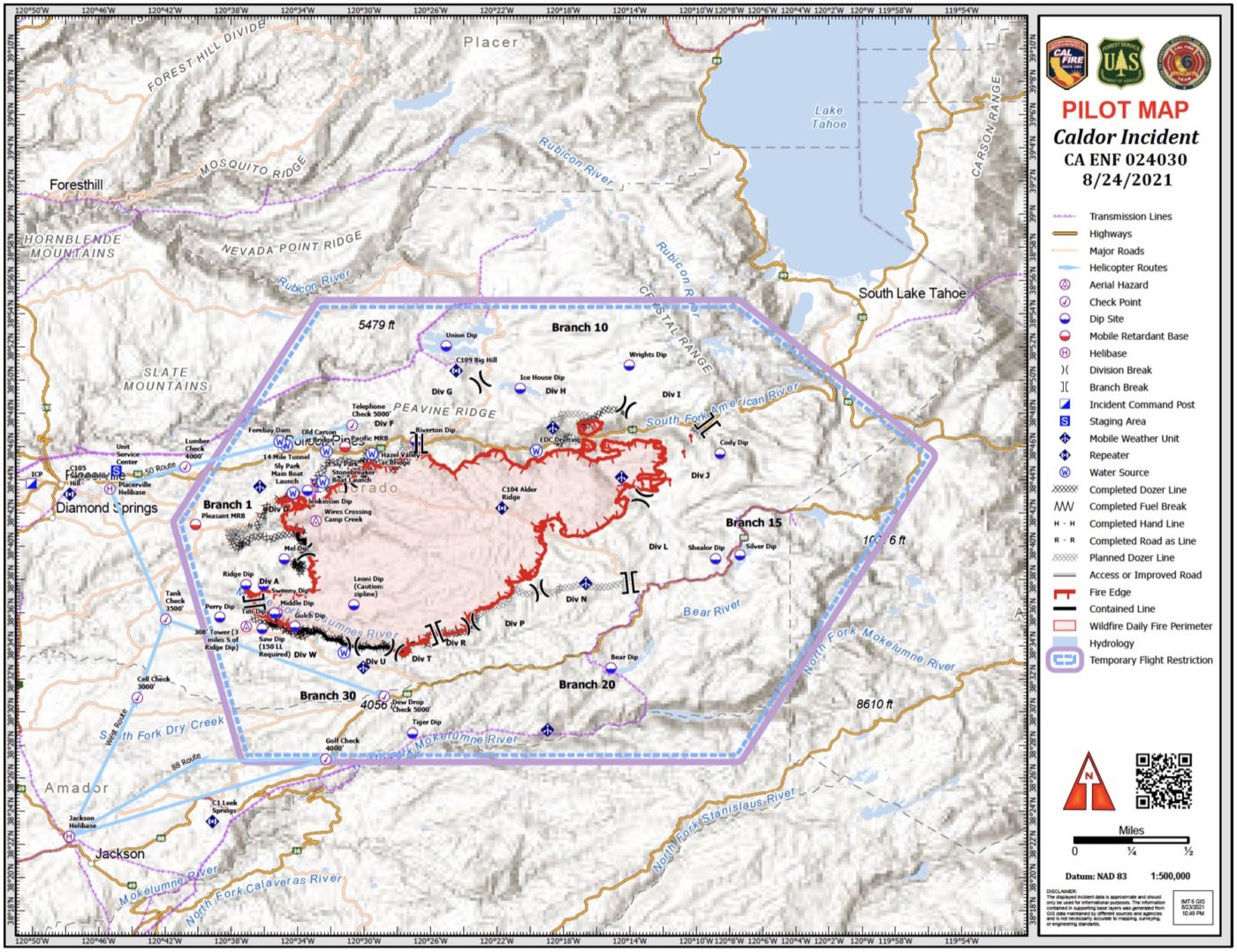 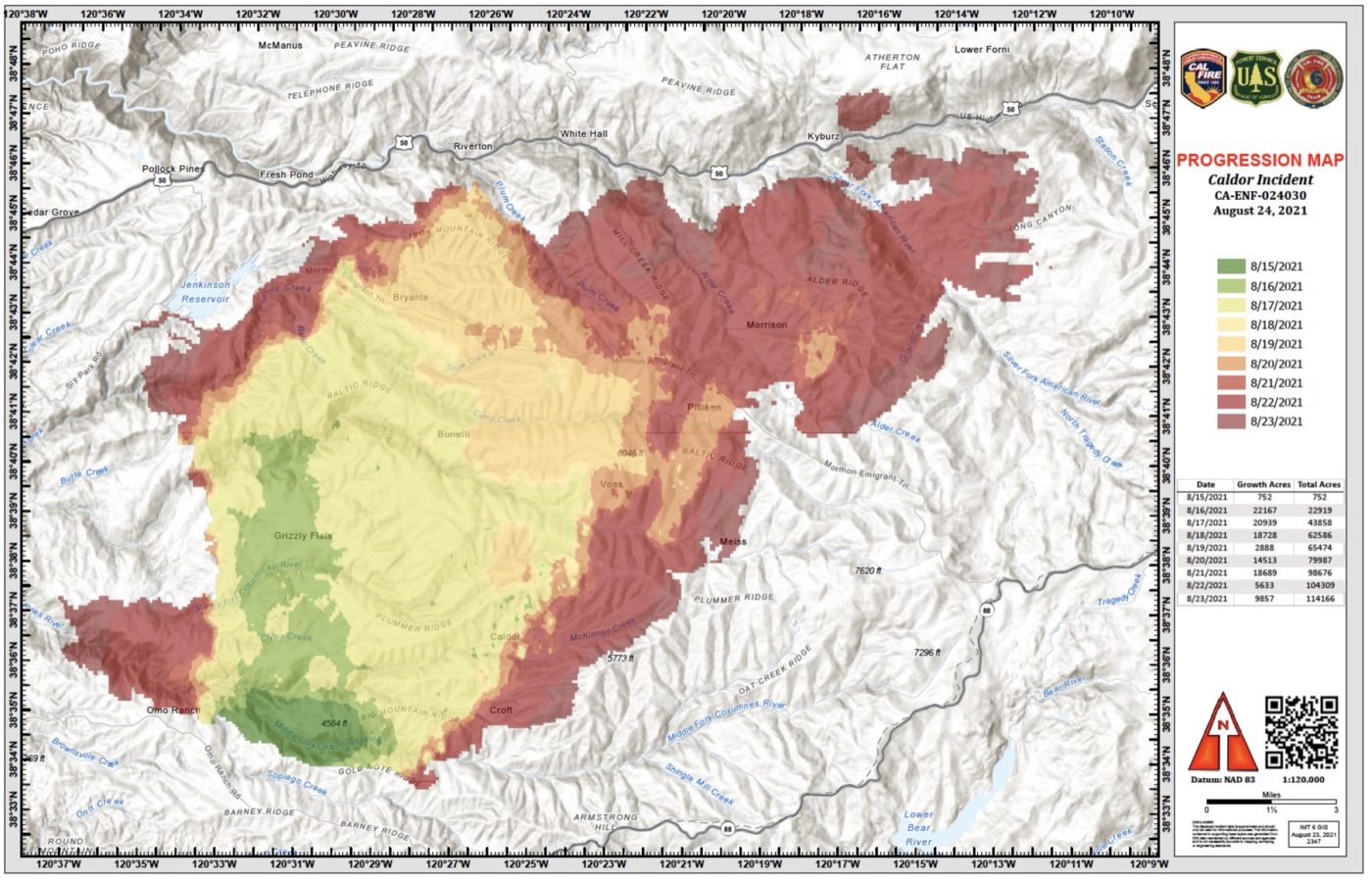 Detailed Maps
We made the maps below here at The Lookout using detailed heat scans (IR flights) captured at 1:44am, 2:30am and 4:45am, on August 24, 2021. Detailed date and time is located on upper-left of each map. Click any map to enlarge.

The fire continued to back downhill toward Highway 50 and the spot fire above Kyburz has now joined the main body. Heat imagery from 2:30am, August 24. The white/light yellow line shows 30 hours fire growth. 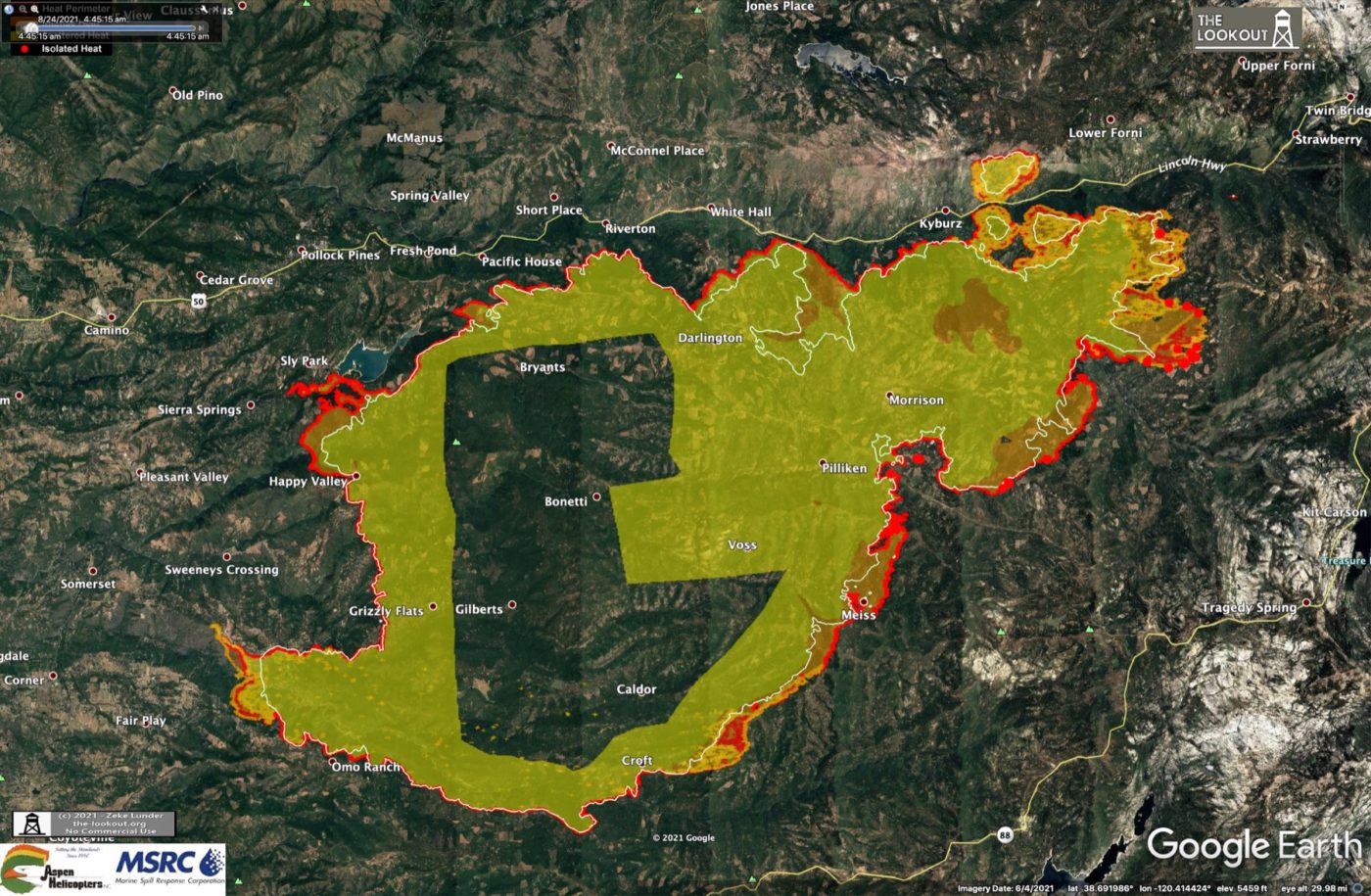 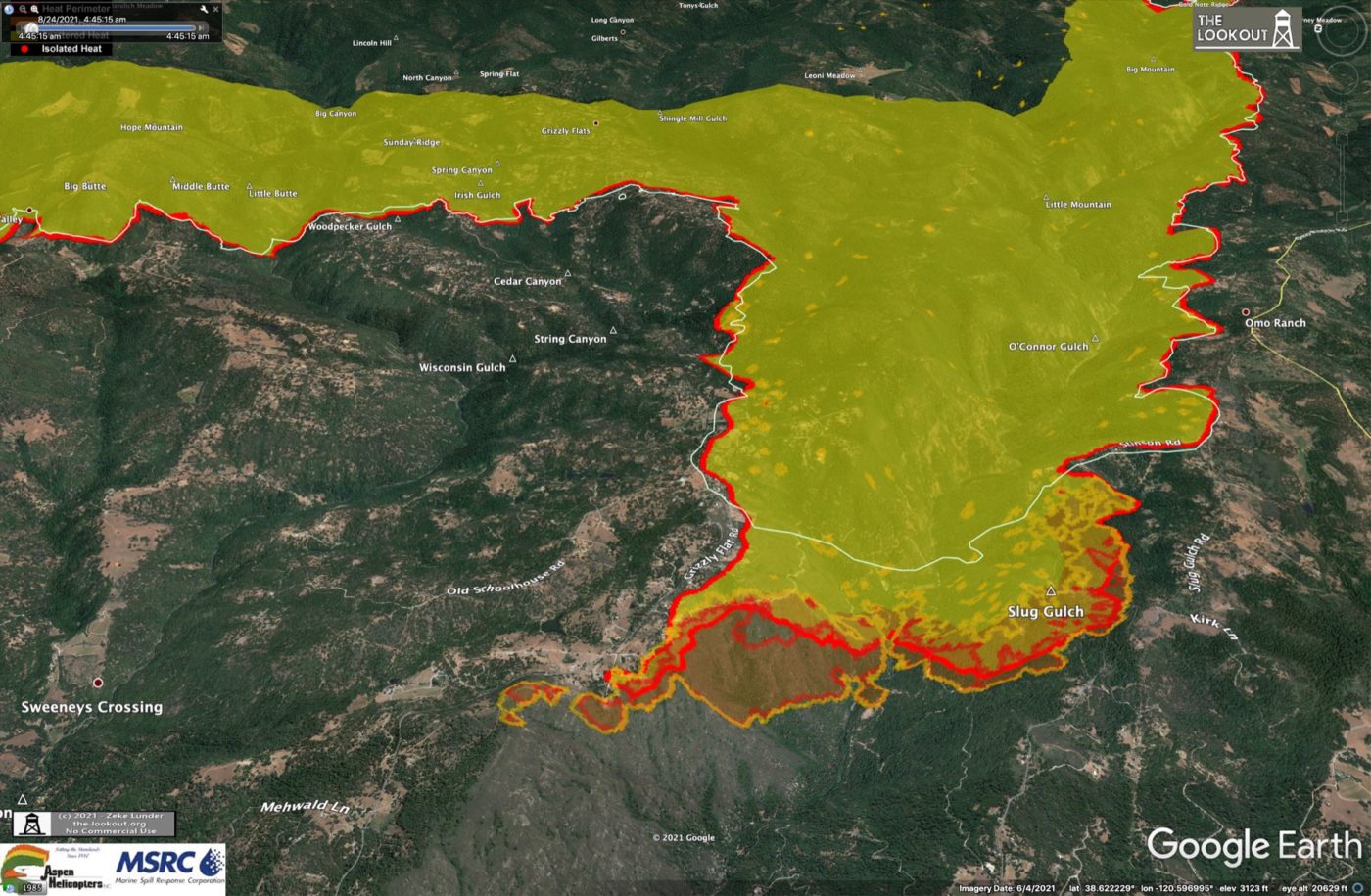 The northwestern flank of the fire, around Sly Park/Jenkinson Lake received a very high priority for firefighting, and firing operations extended down E-16 almost as far as Sierra Springs Drive. As of 2:30am, all of the fire was still on the east side of E-16. Heat imagery from 2:30am, 8/24/2021. White/light yellow line shows 30 hours fire growth. 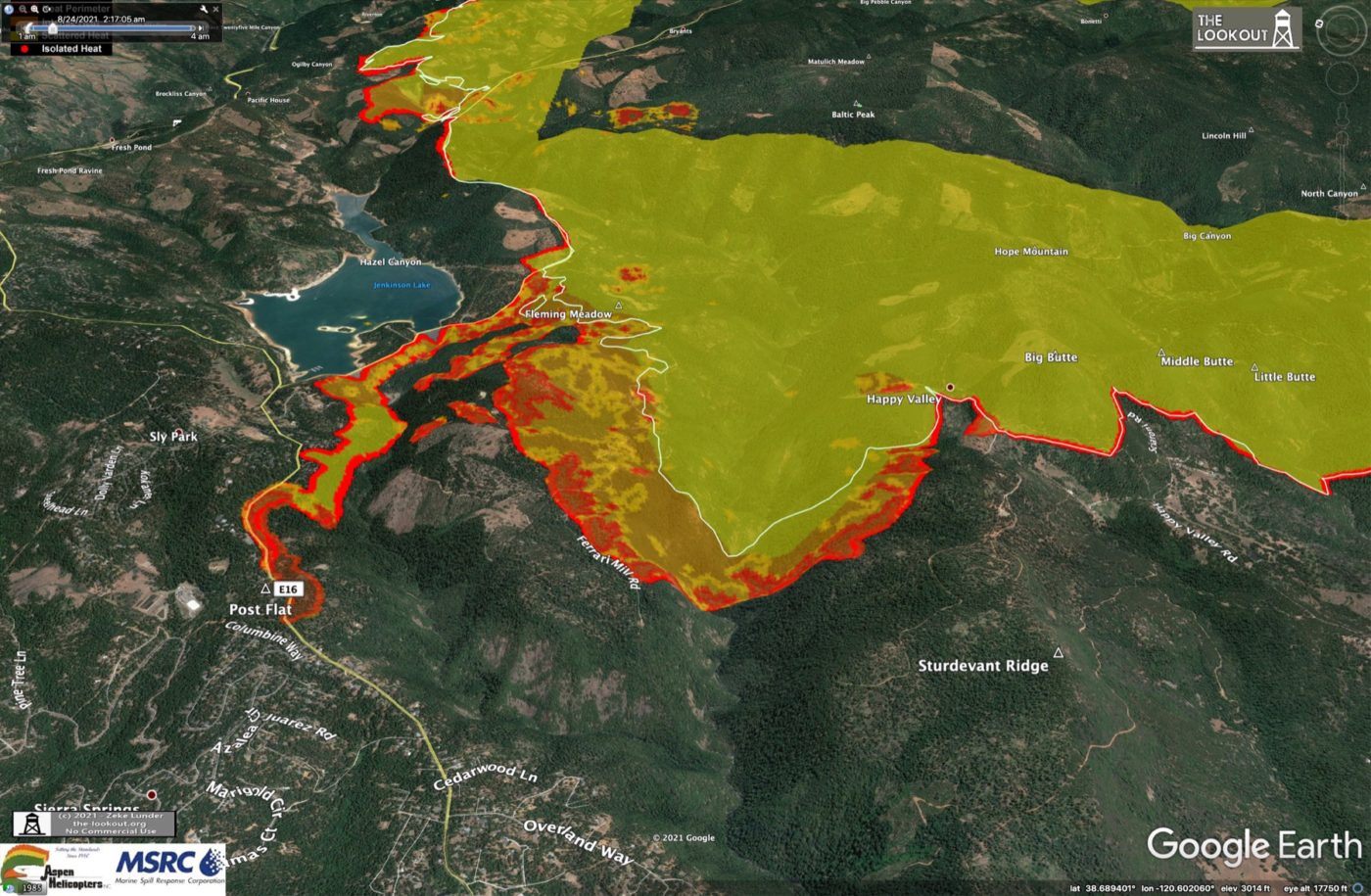 At 2:30am, just southwest of Sly Park Dam, the heat scans showed no fire in the neighborhoods off of Belford Estates, Buckhorn, Fawn, or Doe View. 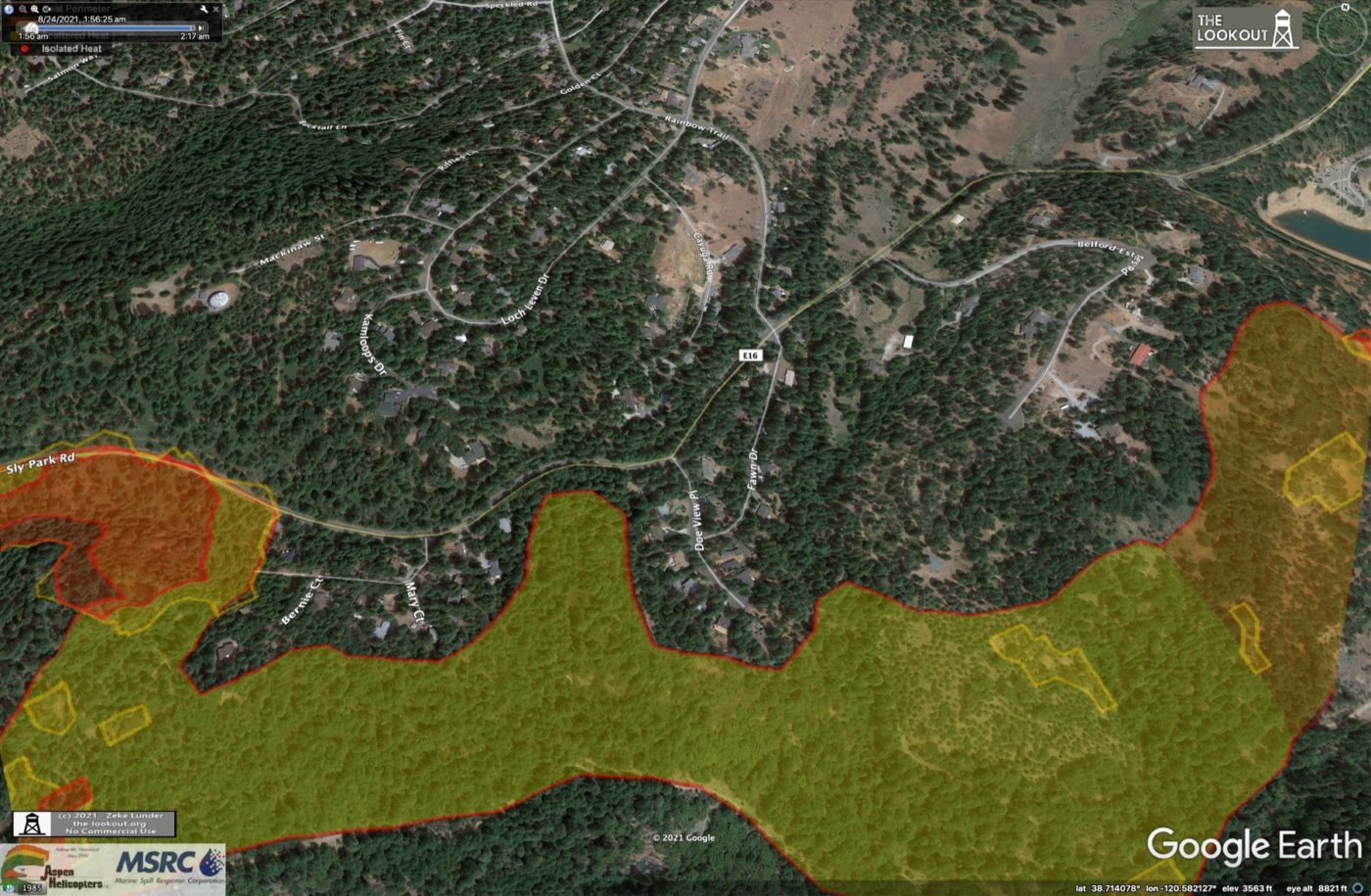 There was no movement north along areas fired of off Mormon Emigrant Trail just east of Sly Park/Jenkinson Lake. Areas farther east continue to back into Sly Park Creek and Hazel Creek. 2:30am, 8/24/2021. White/light yellow line shows 30 hours fire growth. 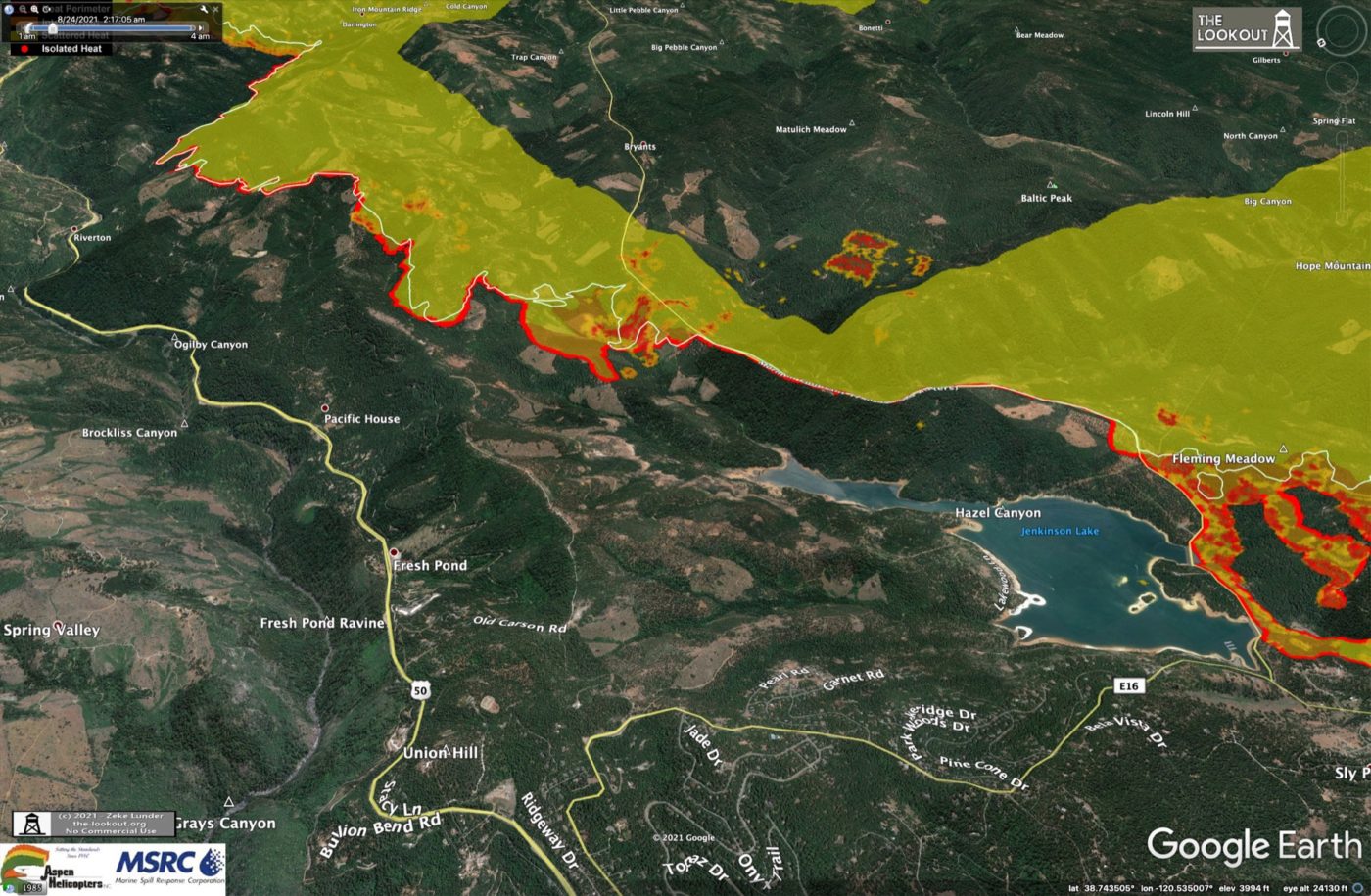 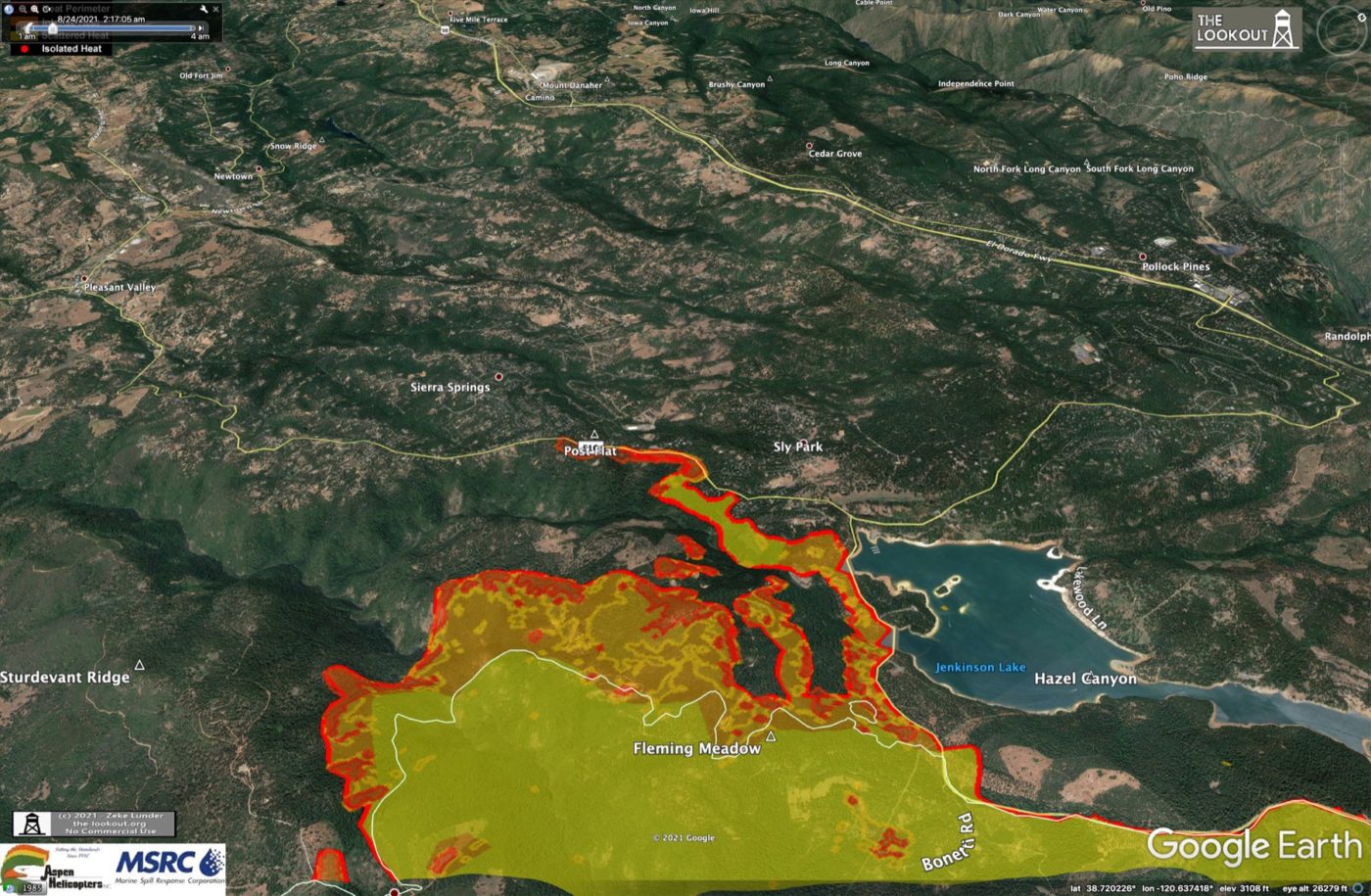 Much of the north flank, south of Highway 50 has not advanced in past 30 hours. 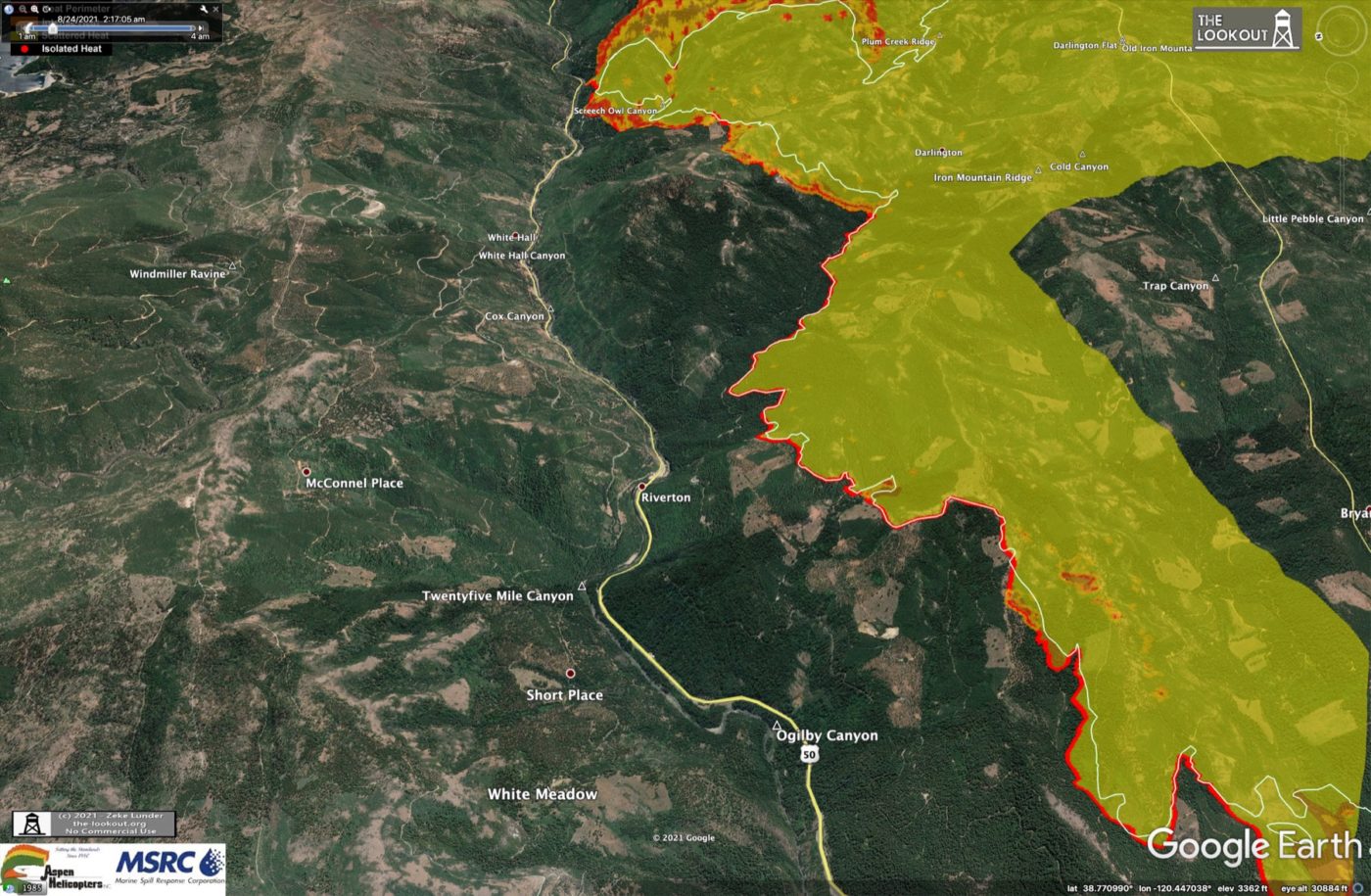 East of Screech Owl Canyon, the fire filled in a large area between two big runs from August 21. 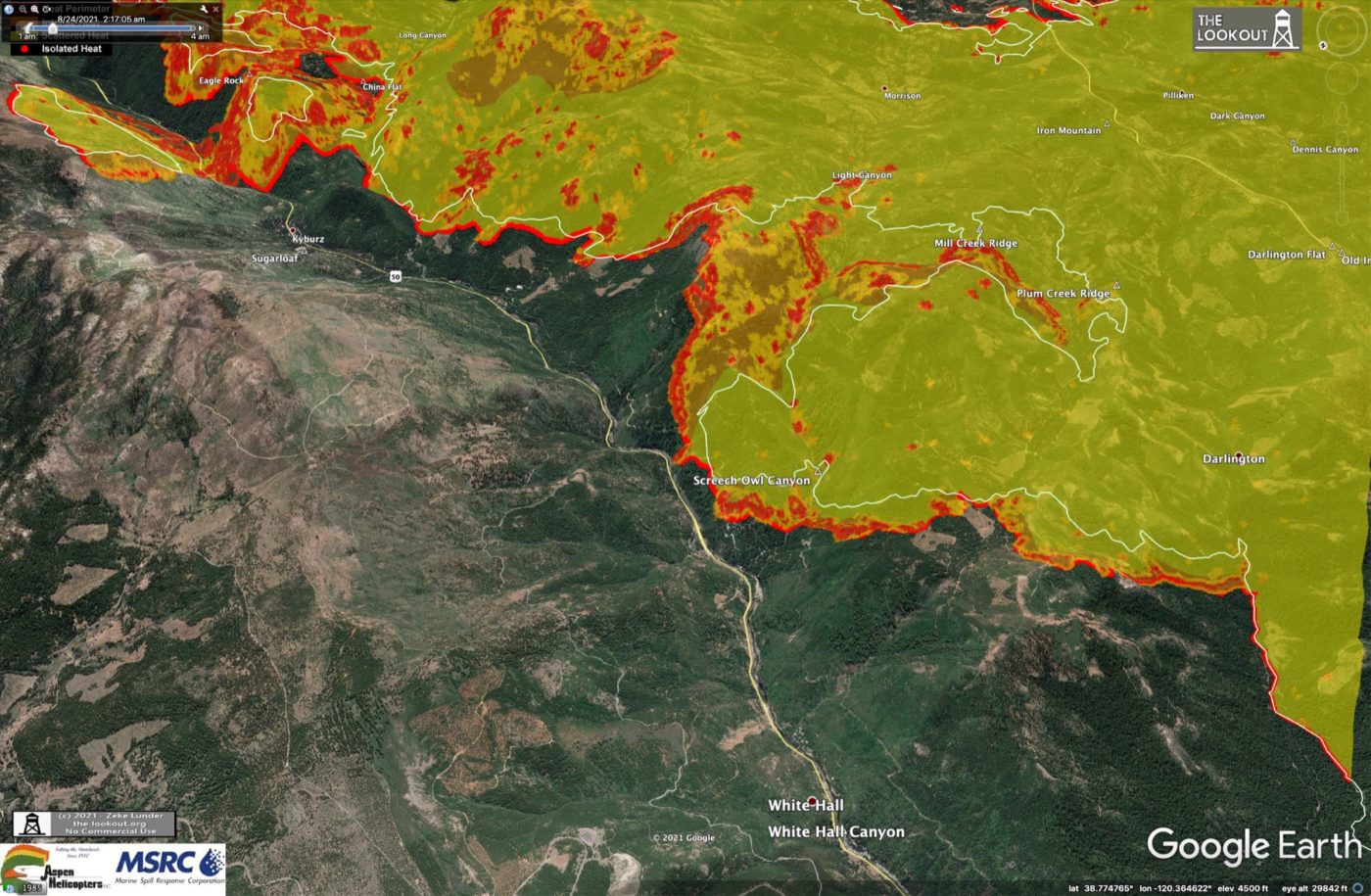 The spot fire east of Kyburz has joined the main fire. 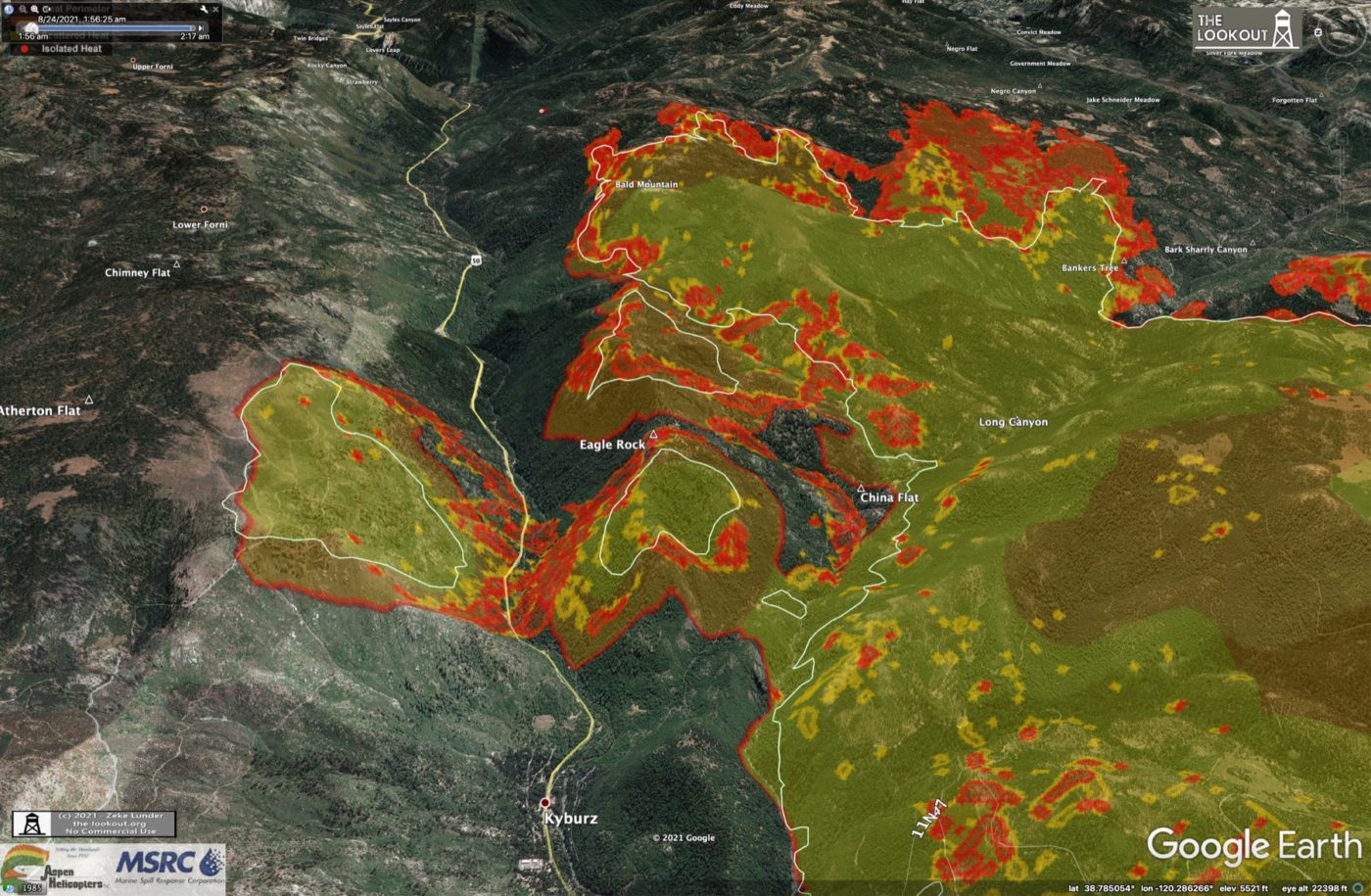 There was very little eastward movement on the area on Bald Mountain which was the head of the fire three days ago. To the west, the fire is backing slowly but steadily down toward Highway 50. 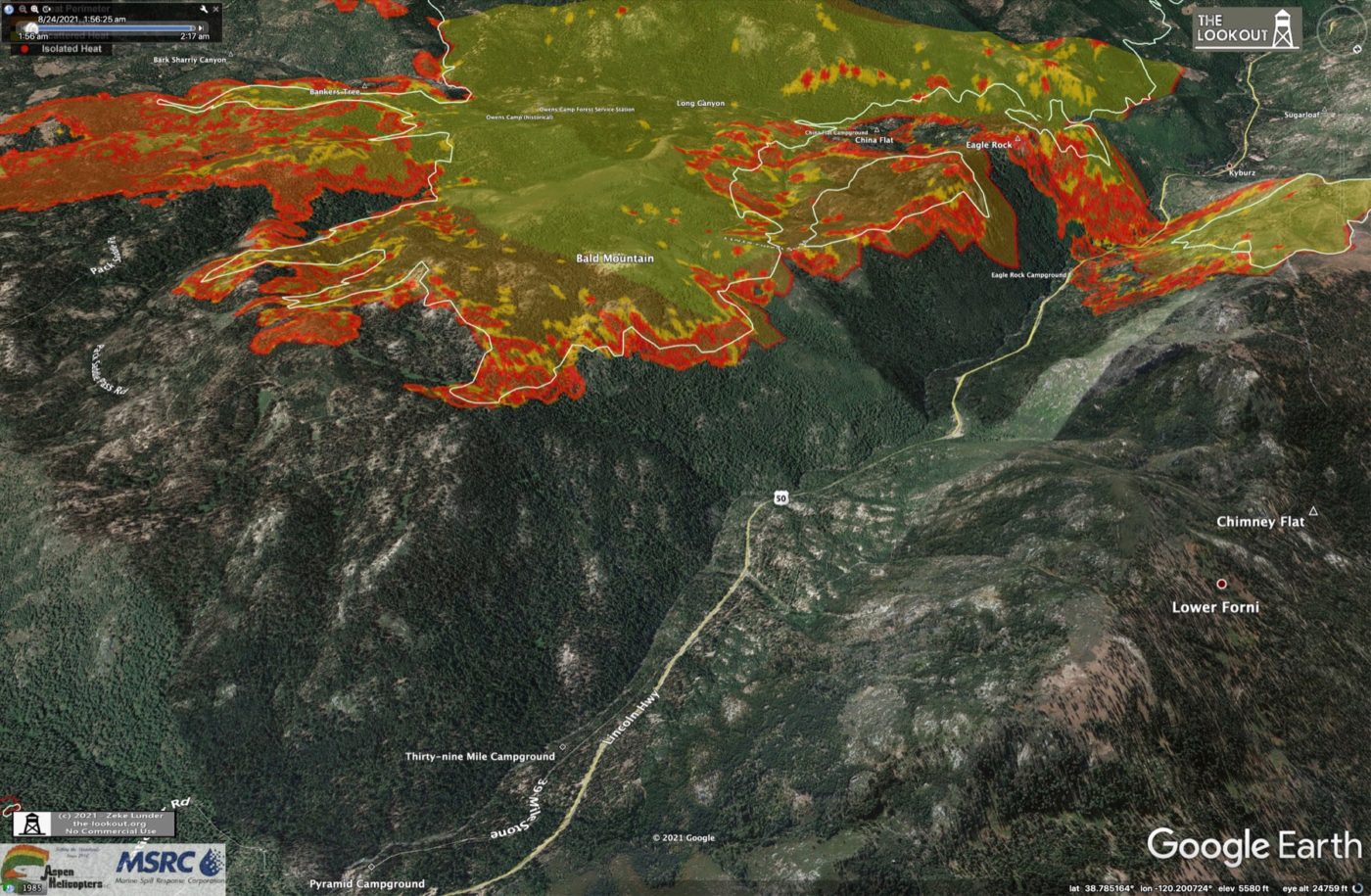 The largest growth yesterday was on the southern flank, especially the southeastern edge. A major run yesterday afternoon broadened the head of the fire east of Bankers Tree. The active area of burning on the eastern head is now approximately four miles wide. 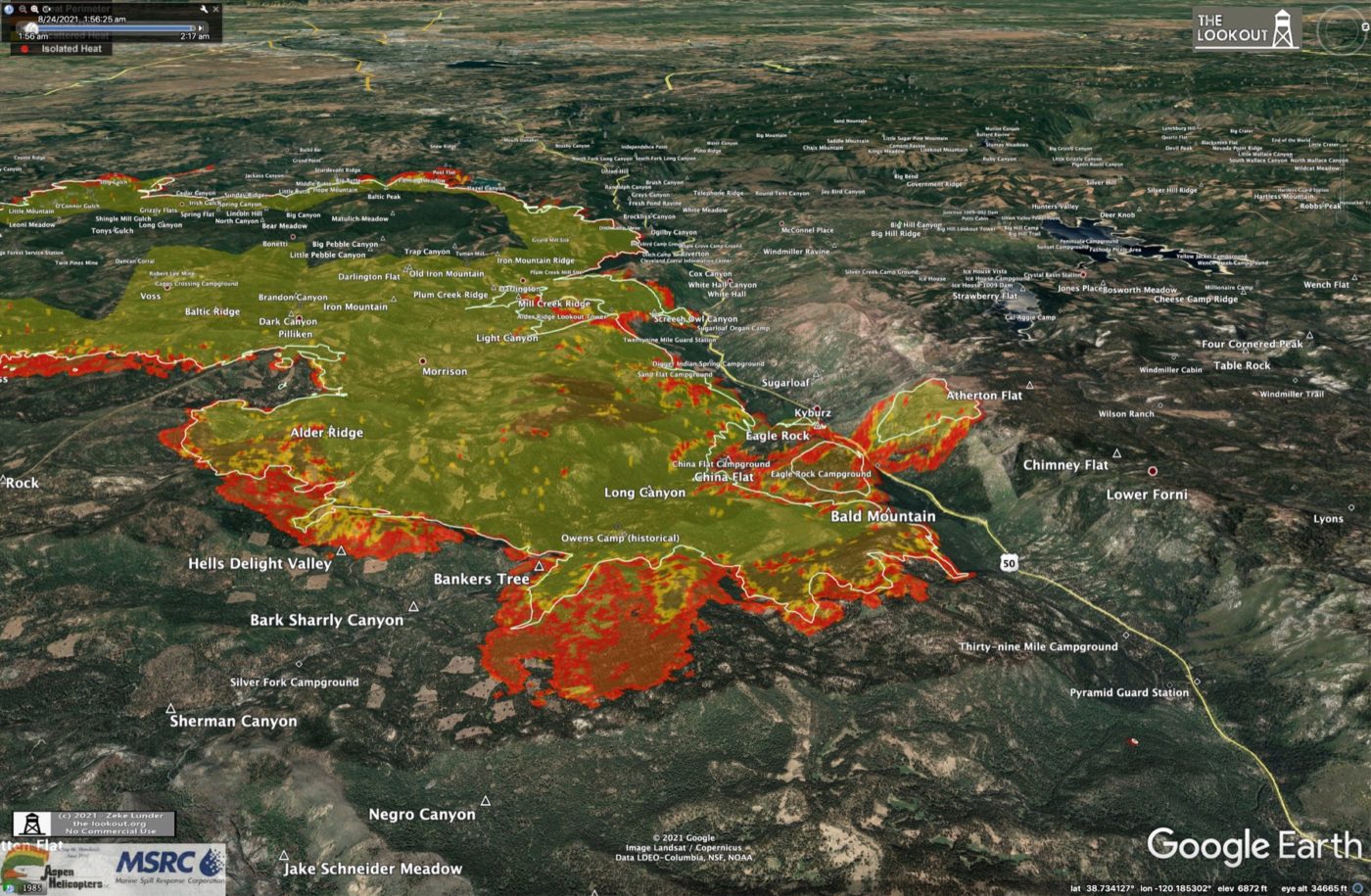 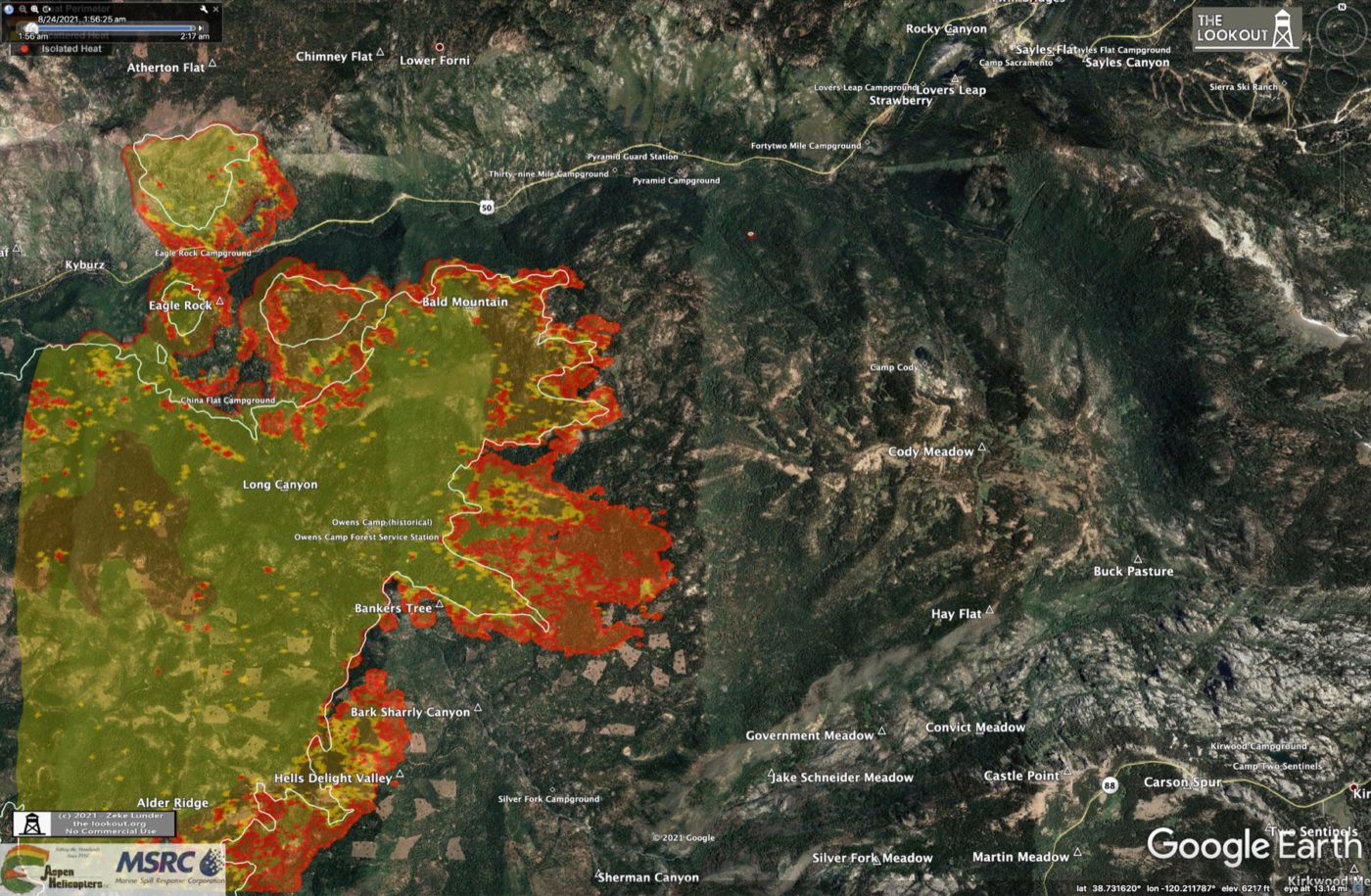 Similar to the two previous days, there were major runs on the SE flank that ran parallel to areas burned during the big run on 8/21/2021. These runs were very visible on the Armstrong Lookout webcam. 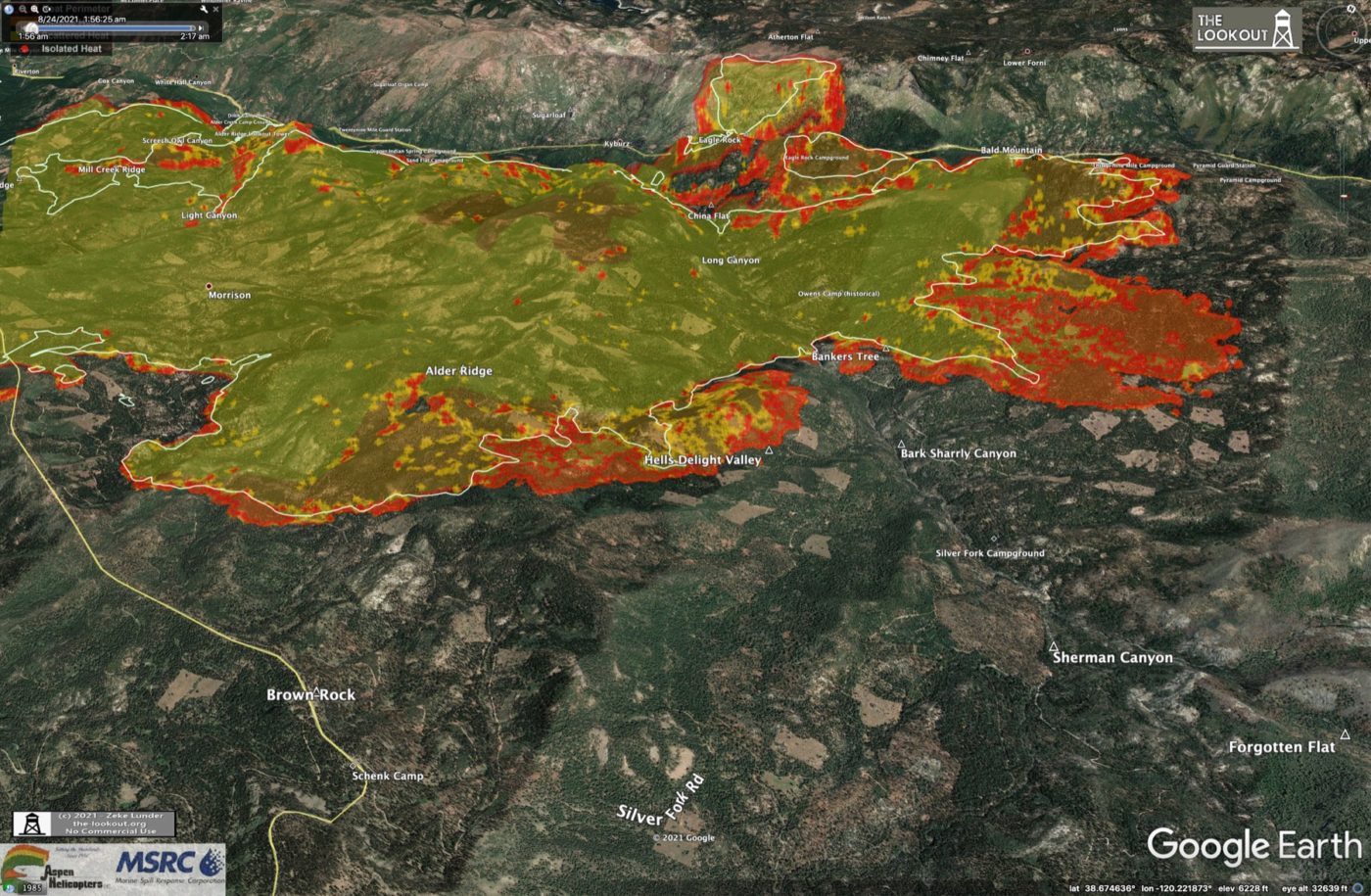 Here is another angle of the southeast flank. 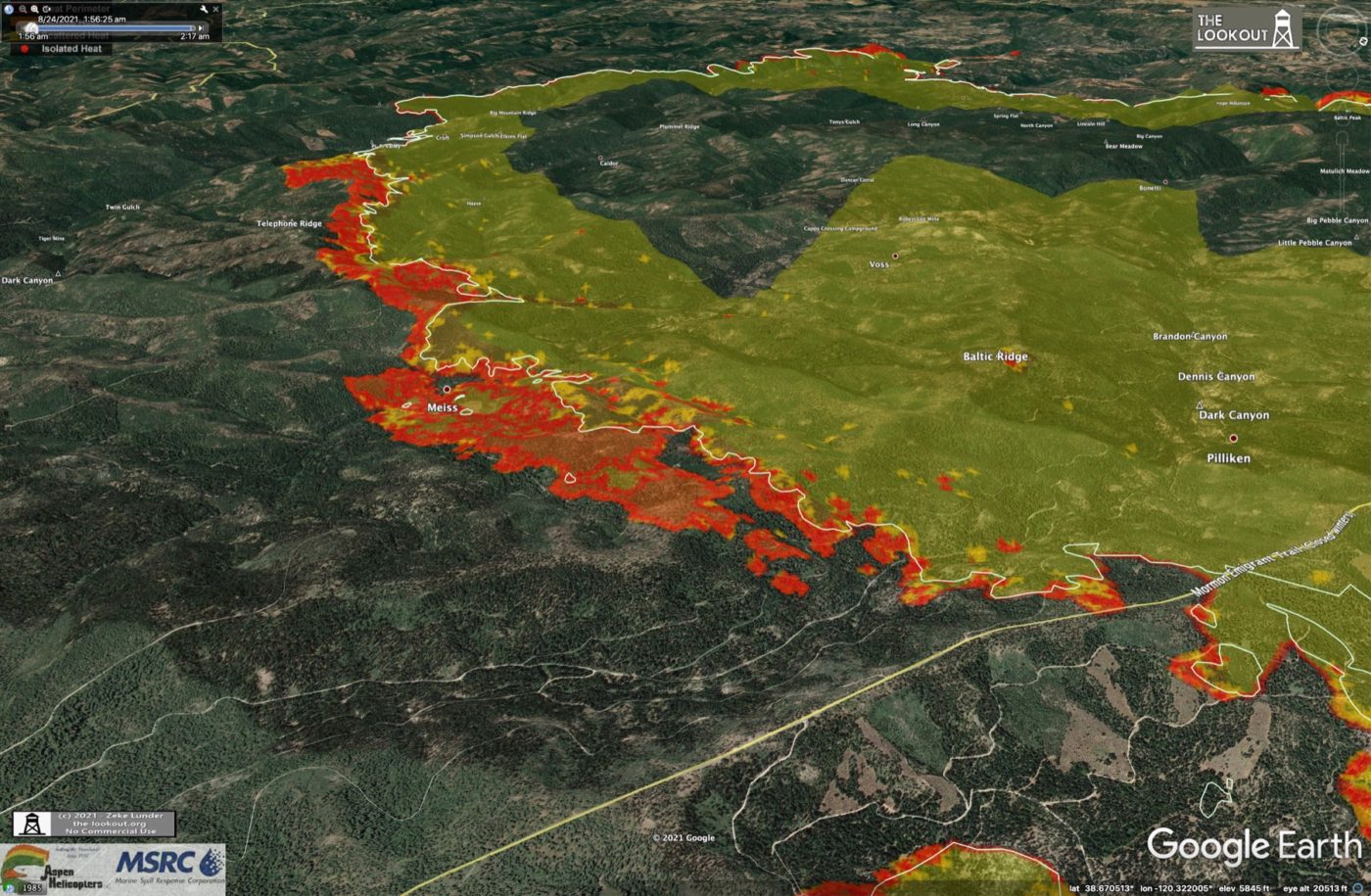 More growth on the SE side of the fire. 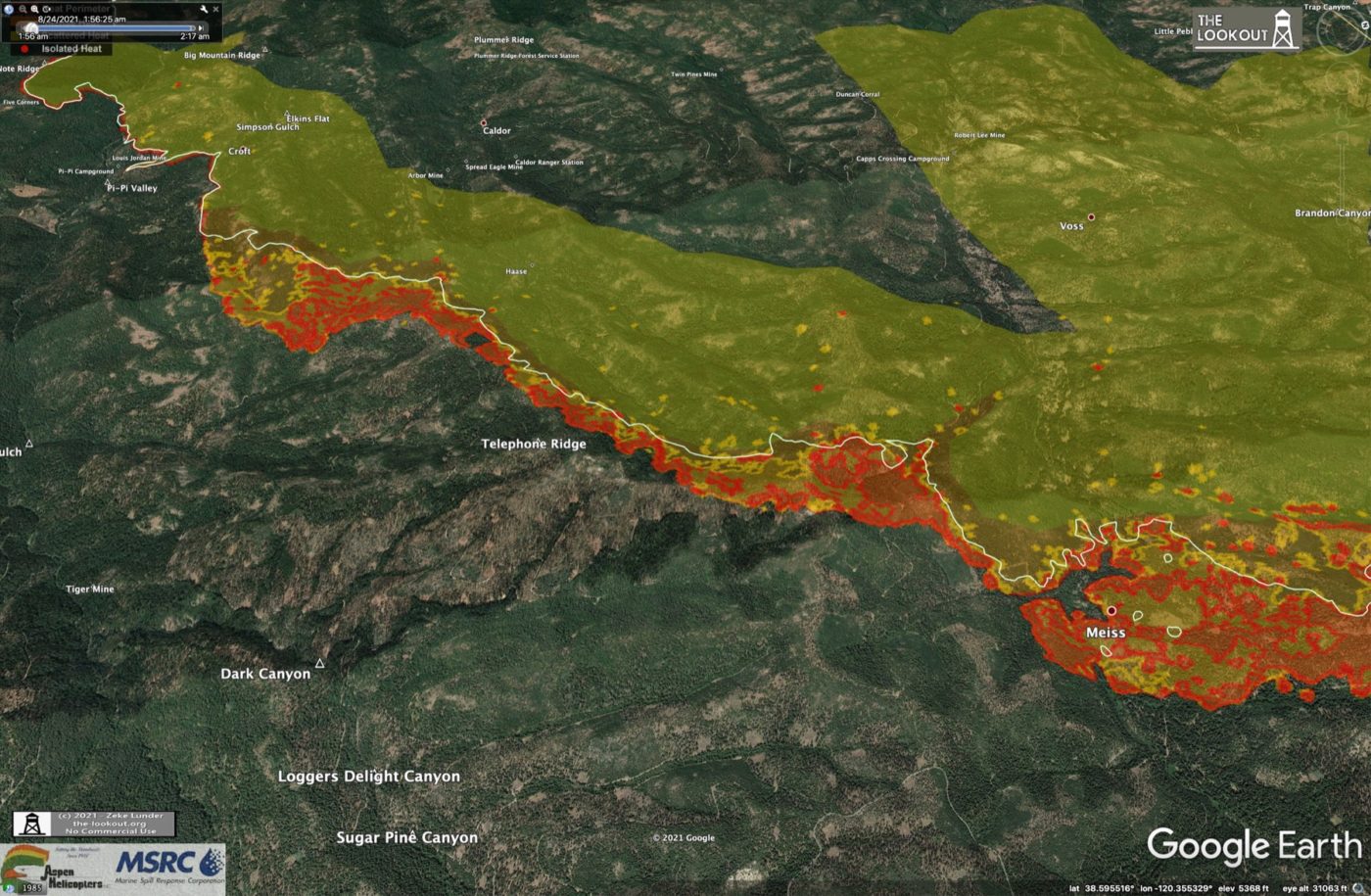 This is the southern edge of the fire. As mentioned yesterday, this area had good access for aircraft in the past week, and favorable winds to control the fire. There has been no real growth here for several days. 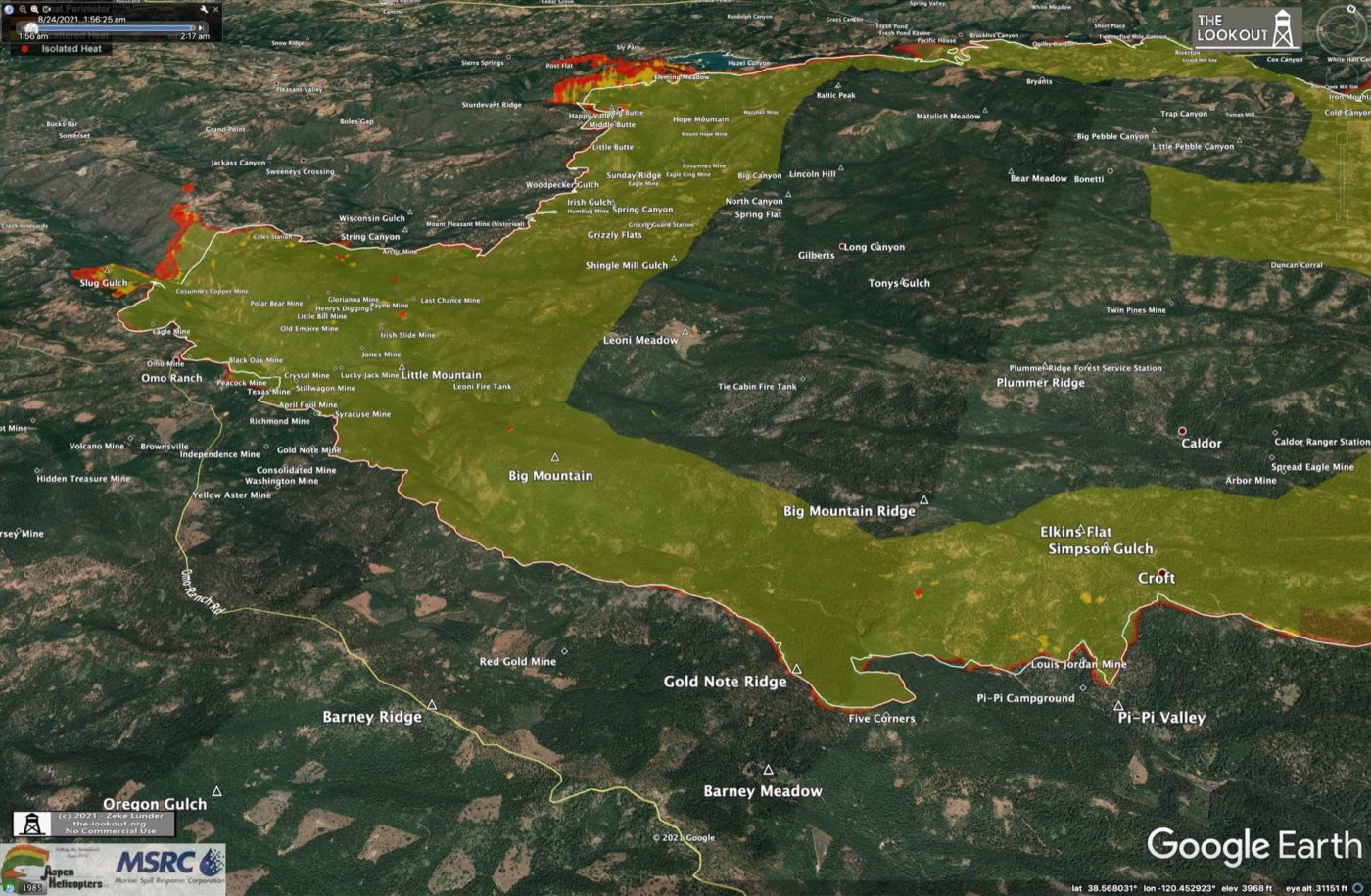 Looking west over Omo Ranch. There was some minor growth east of Omo Ranch in past 30 hours. Heat mapped at 4:45am, 8/24/2021. White/light yellow line shows 30 hours fire growth. 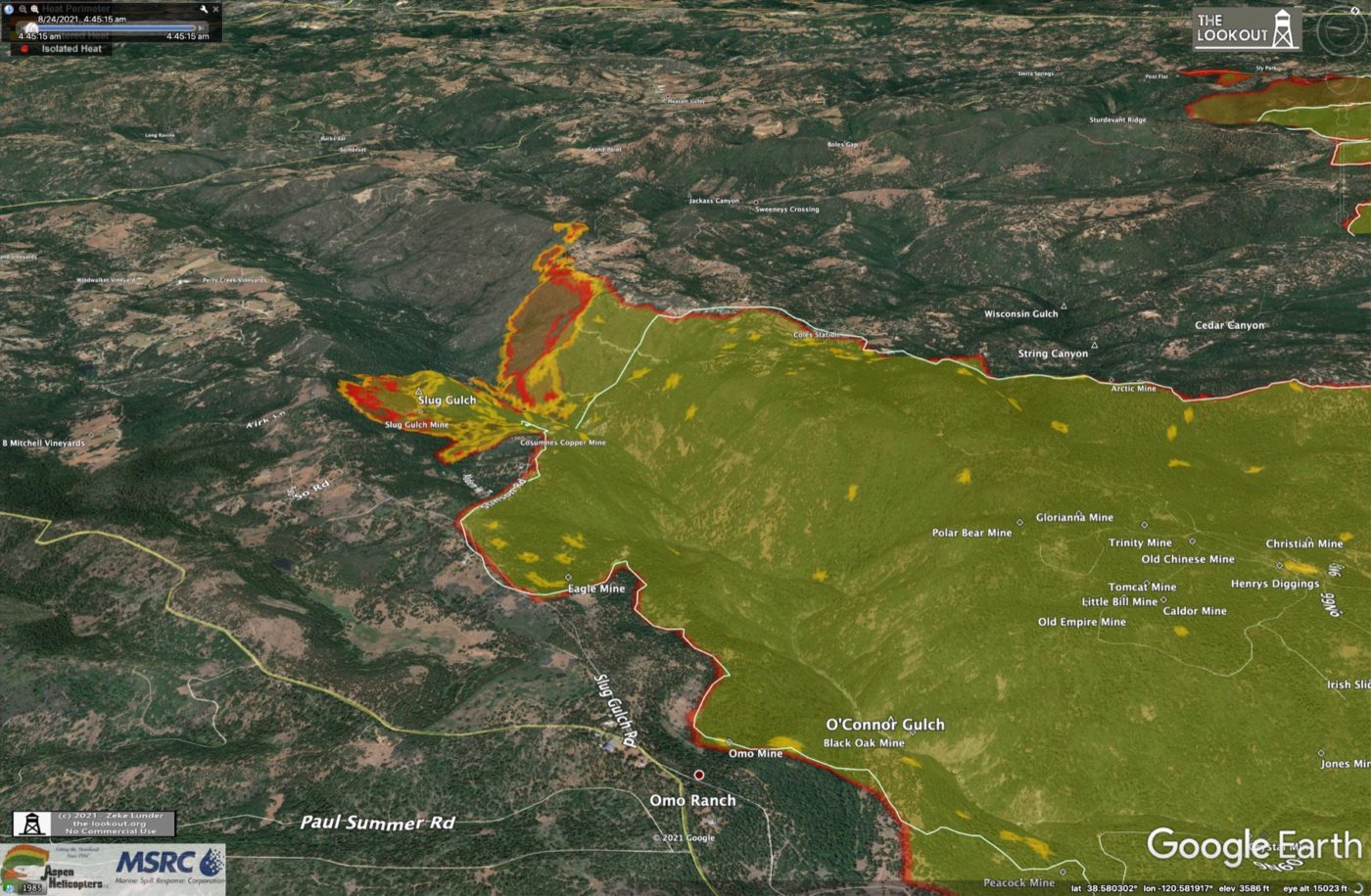 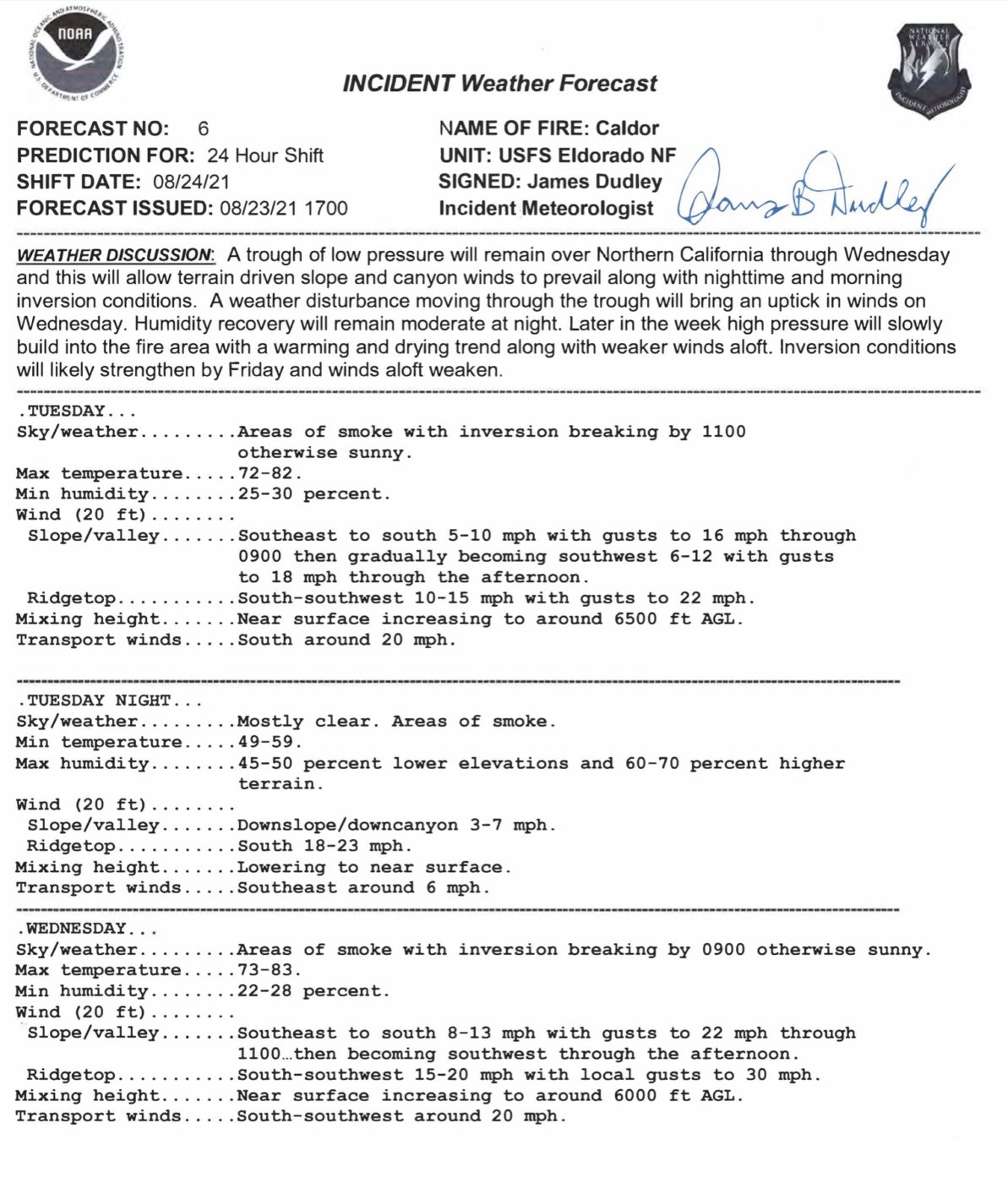 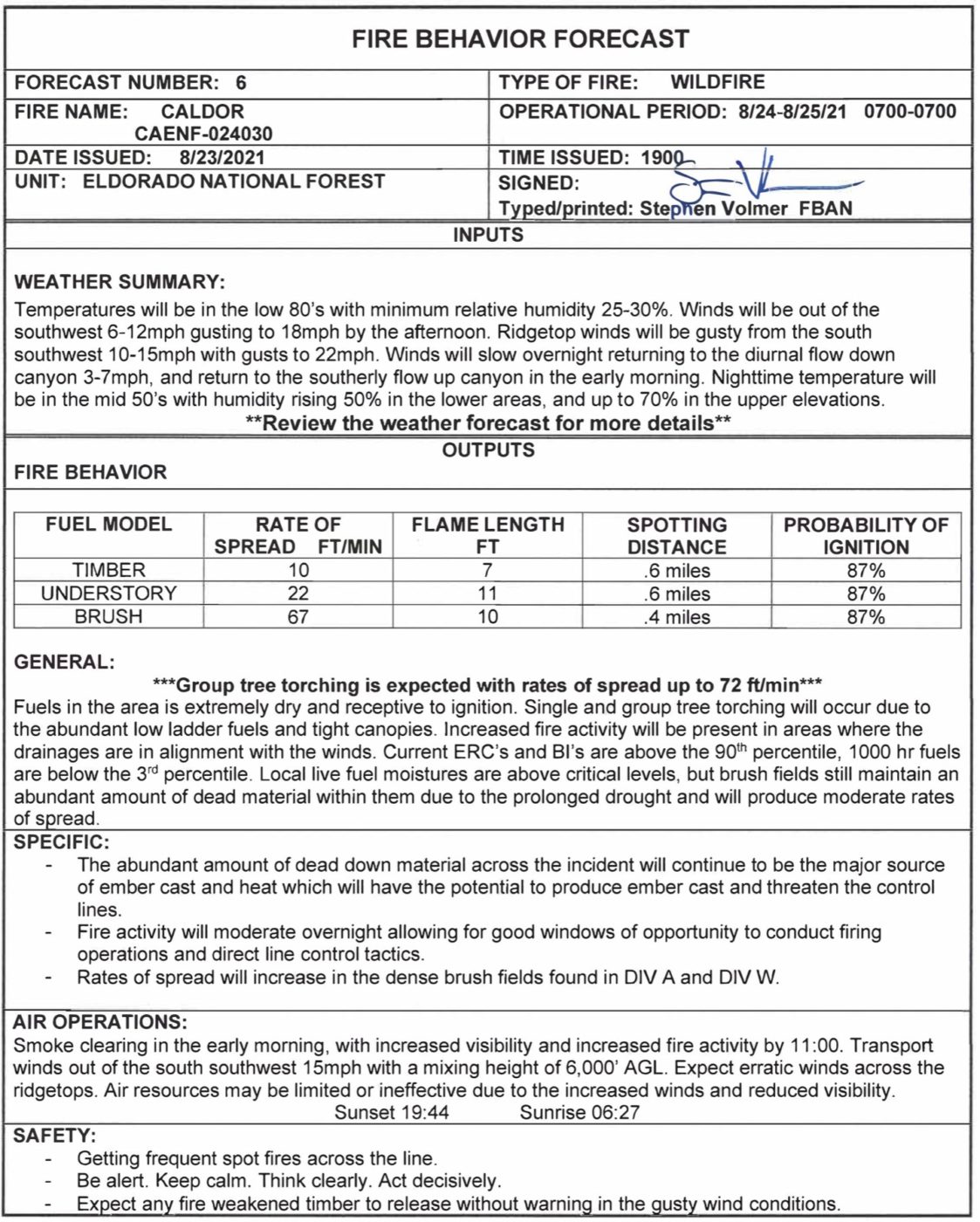