MAP UPDATE: 7:00 pm IR heat mapping
The north and south heads of the fire came together on top of Highway 50 between Kyburz and 39-Mile Campground this afternoon. 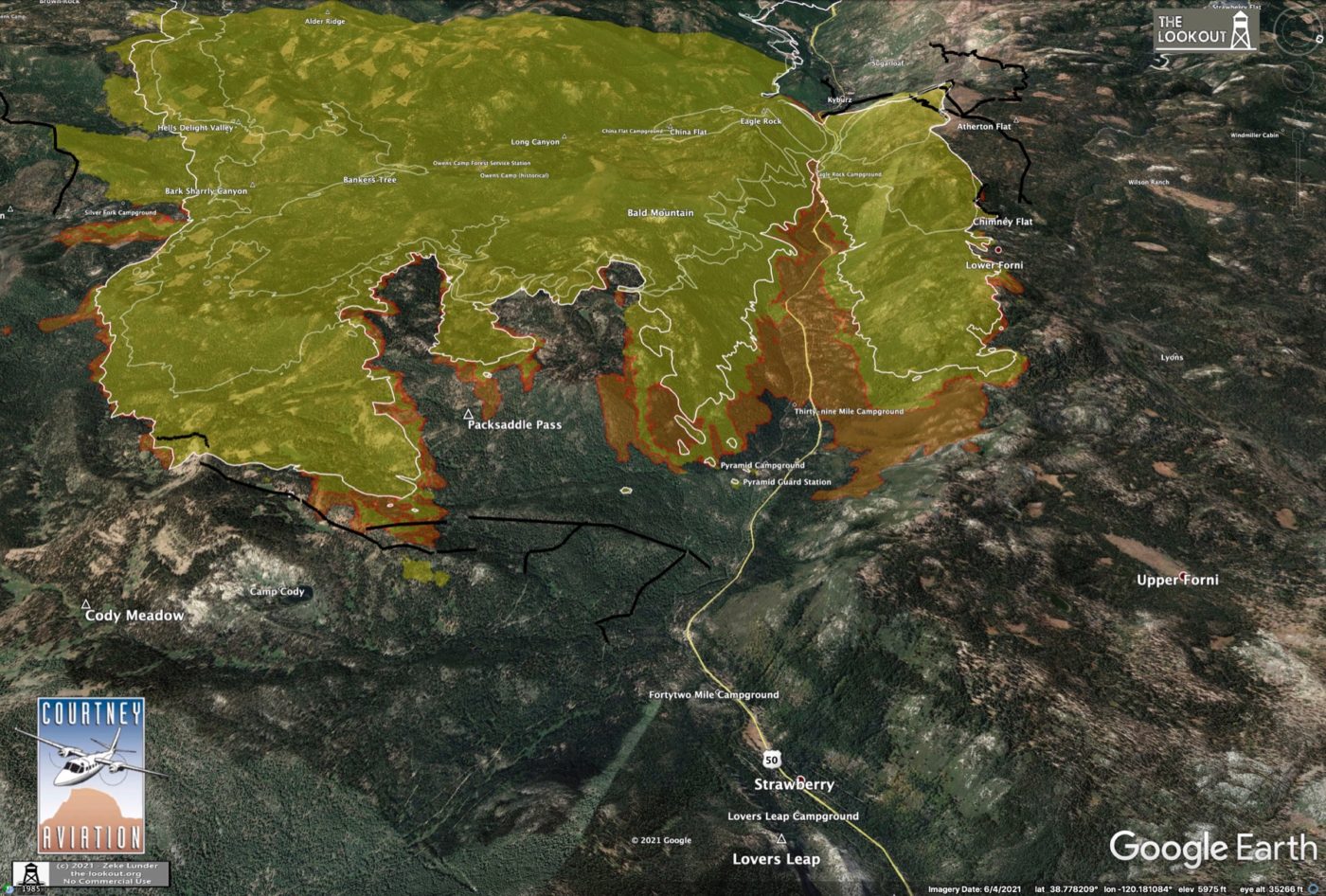 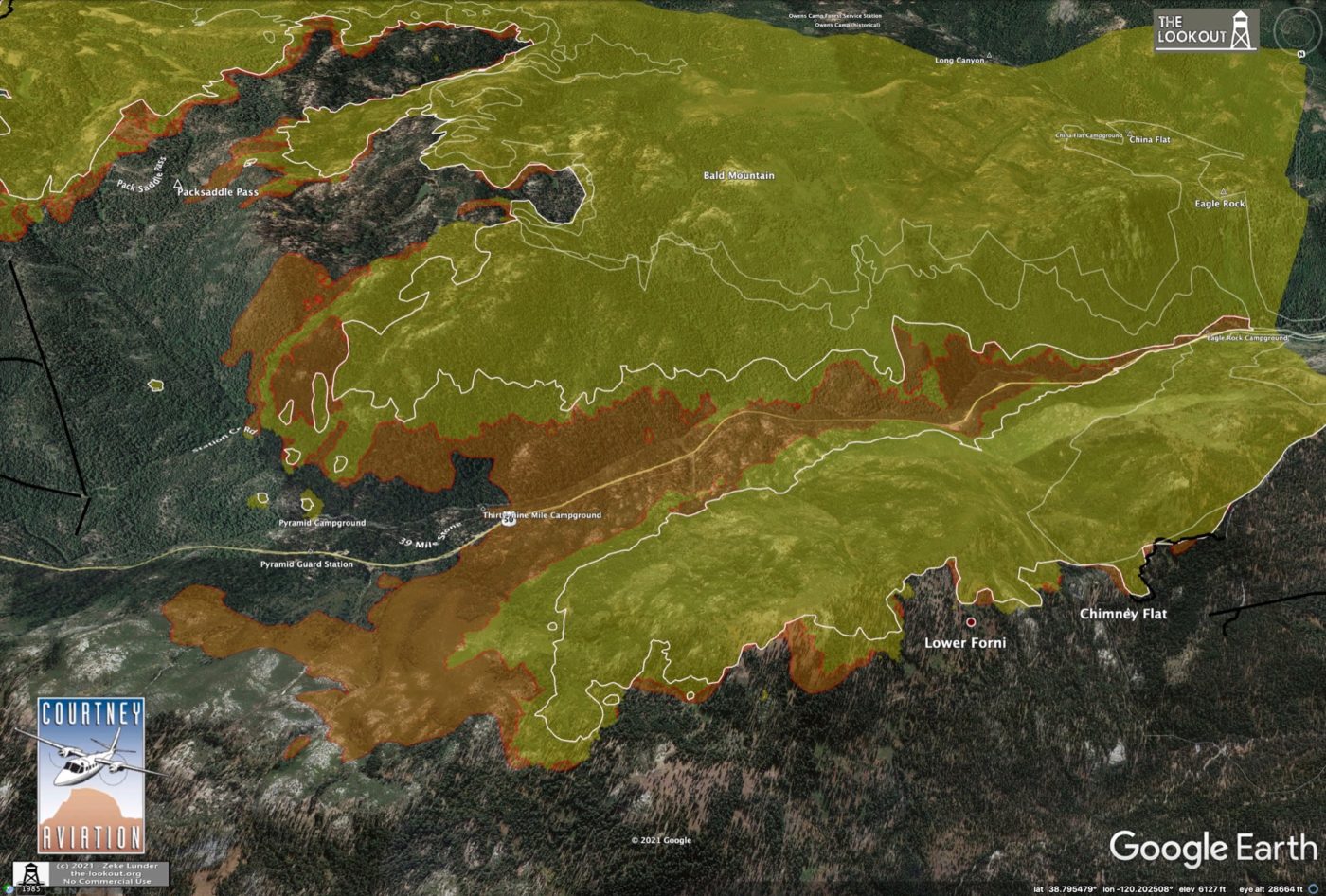 The fire that established itself over the dozer lines in Cody Creek did not appear to grow much this afternoon. 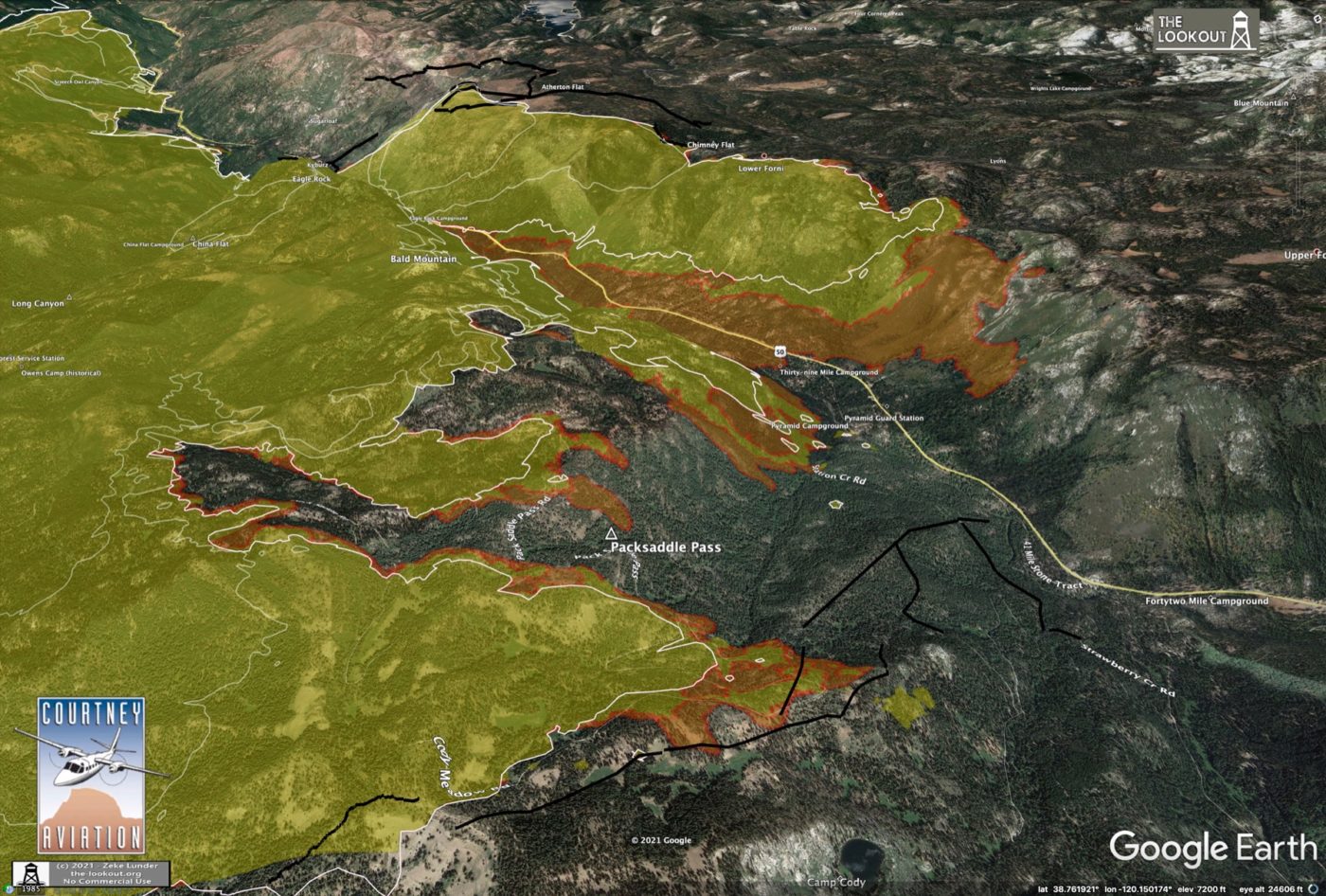 As noted in the midday update, the southeast flank of the fire got some winds out of the NW and some headfire runs to the SE resulted. A return to normal upslope flow will turn these protrusions from the fire back into head fire runs that will widen the head of the fire.

There is a significant twist to the southeast side of the fire I have been missing. I didn’t realize the 2019 Caples Fire was right to the south, here (shown in blue). Caples was prescribed fire project which was declared a wildfire after weather conditions changed and the fire was no longer staying in the area the US Forest Service wanted to burn. 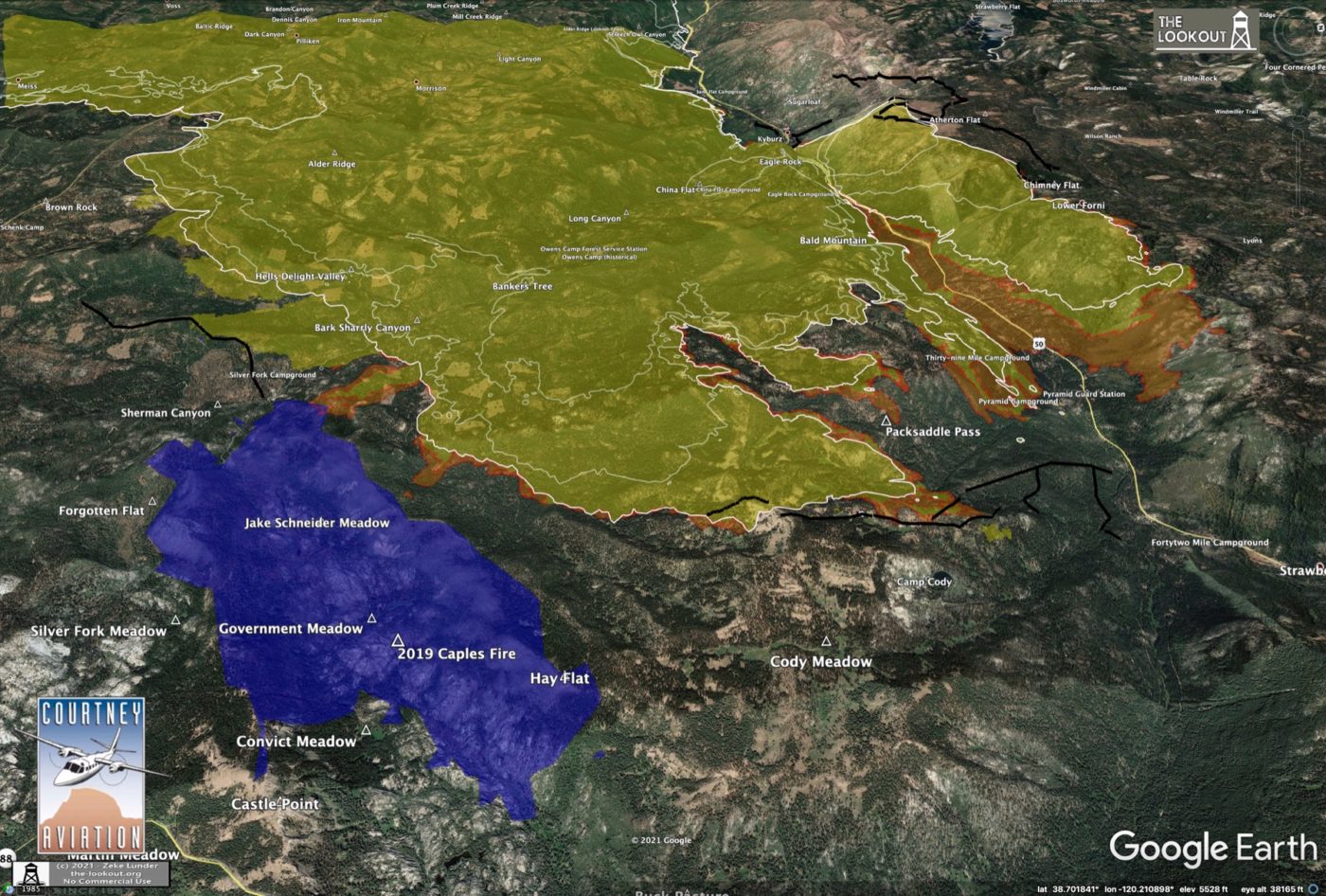 The 2 year old Caples Burn looks like it could greatly decrease the odds of the Caldor Fire burning to Kirkwood. 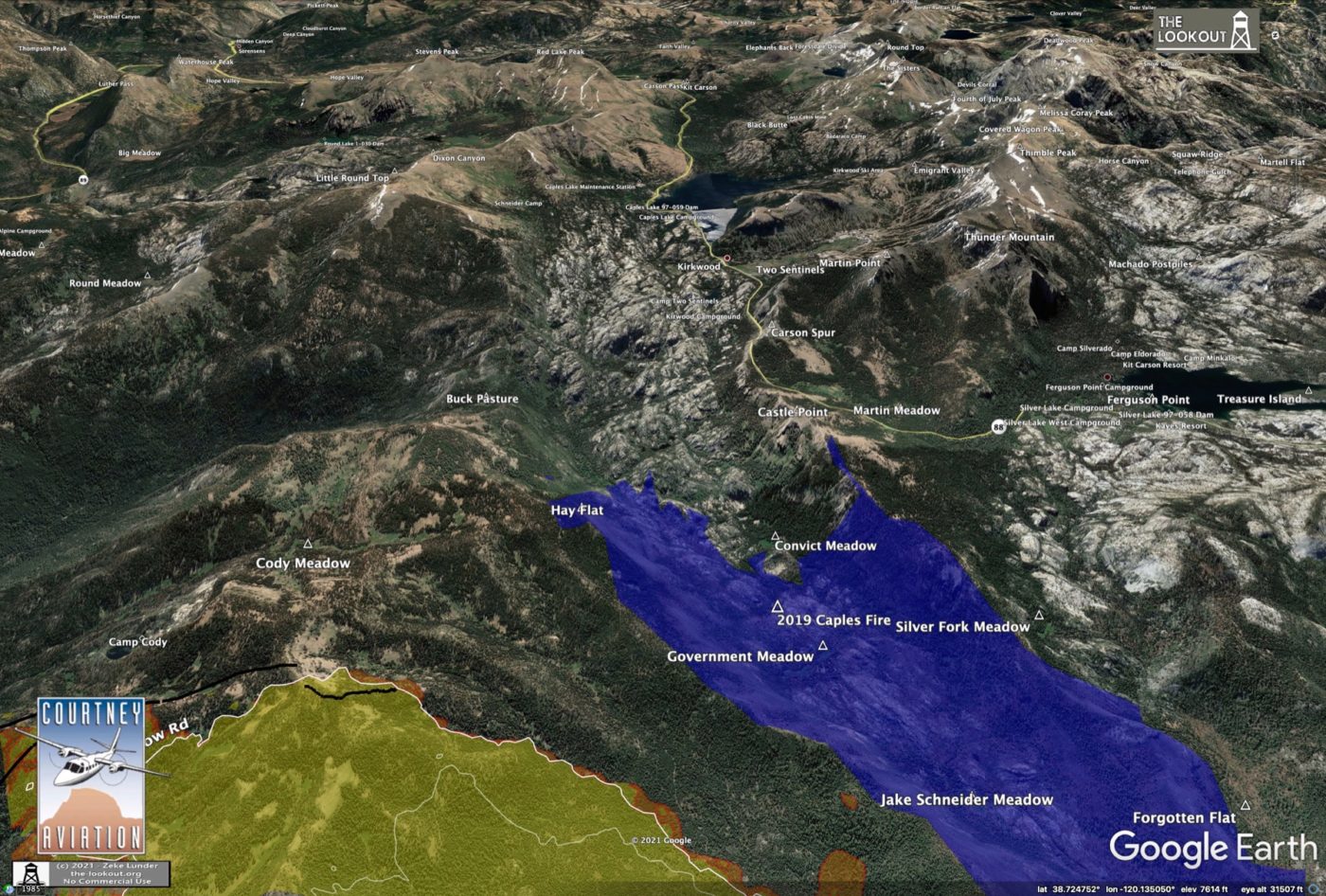 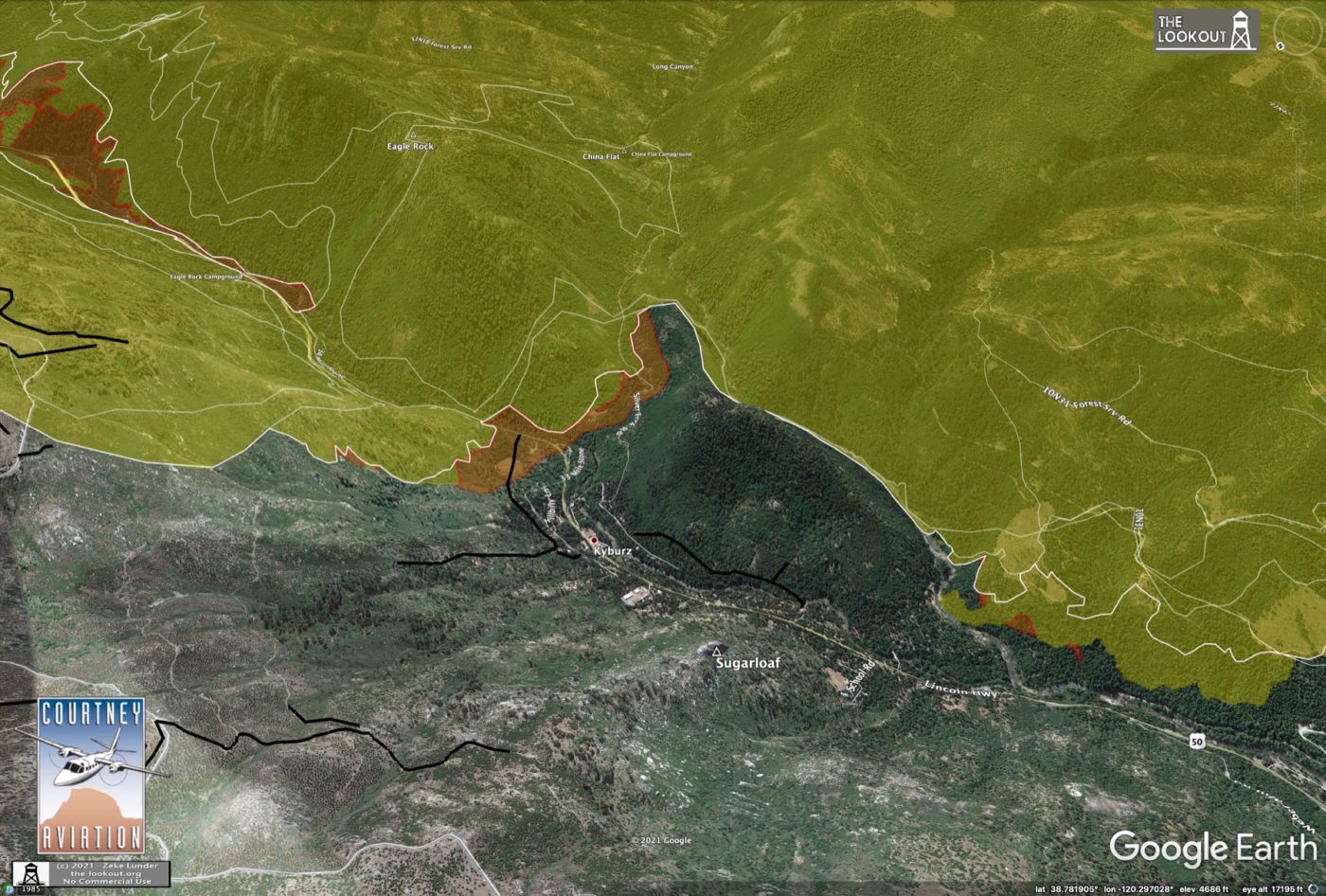 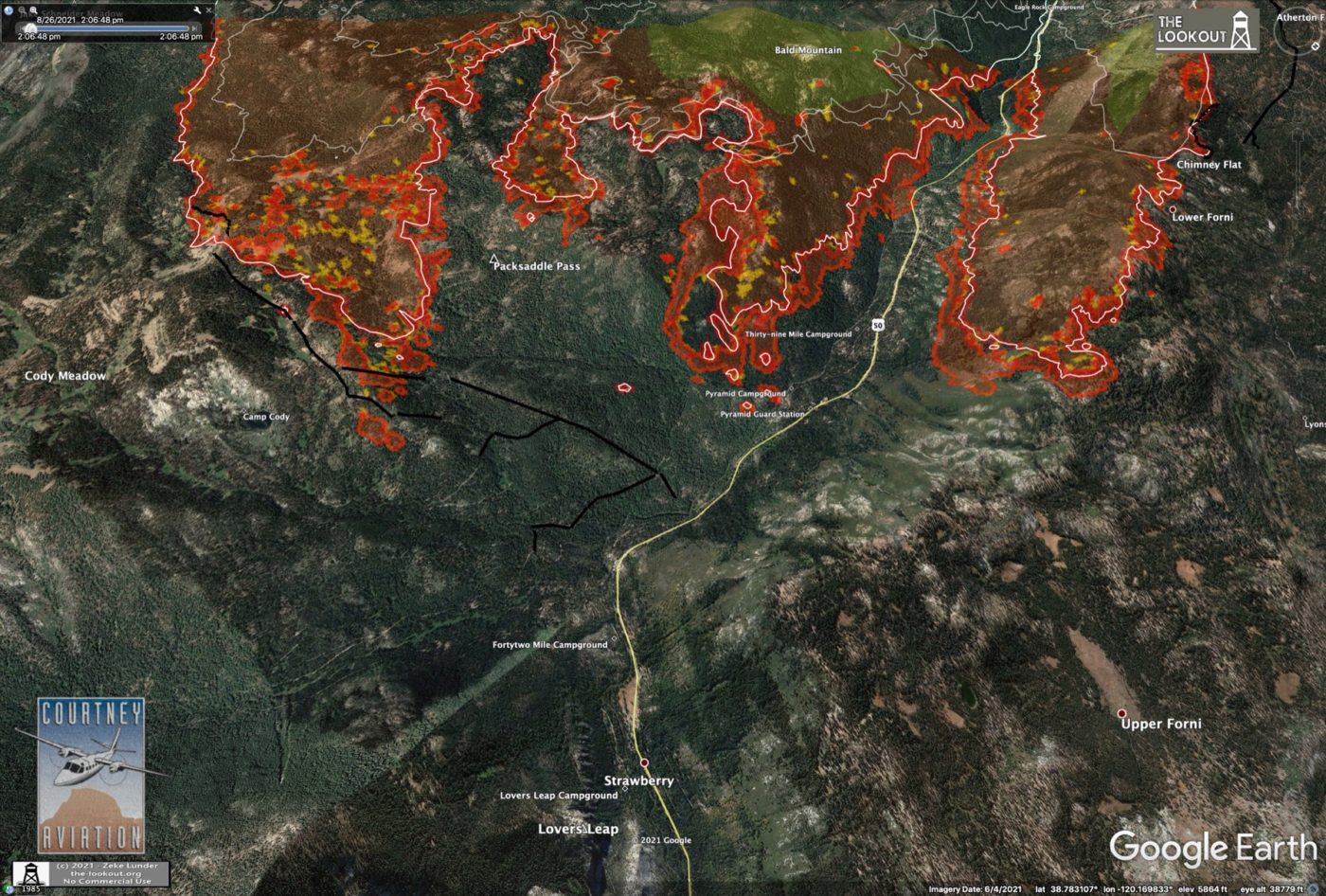 There has been significant spread on the SE flanks of the fire where NW winds have turned flanking areas into new heads over the past few days. These runs have spread 1/2 to 1.5 miles since 3am on August 26. 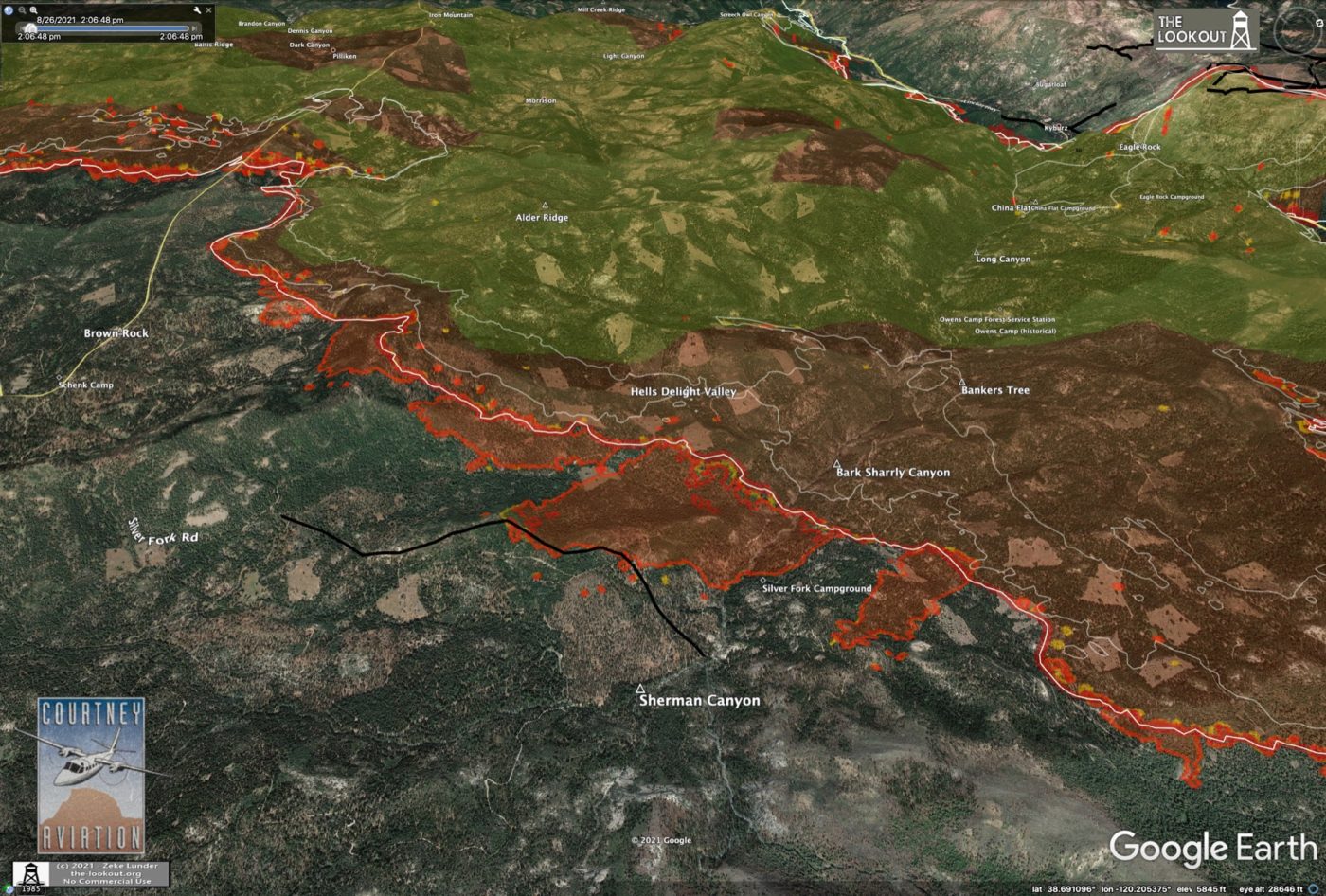 This image shows the hot edge of areas fired last night. The interior of this area is burned, but isn’t showing up on the latest IR. 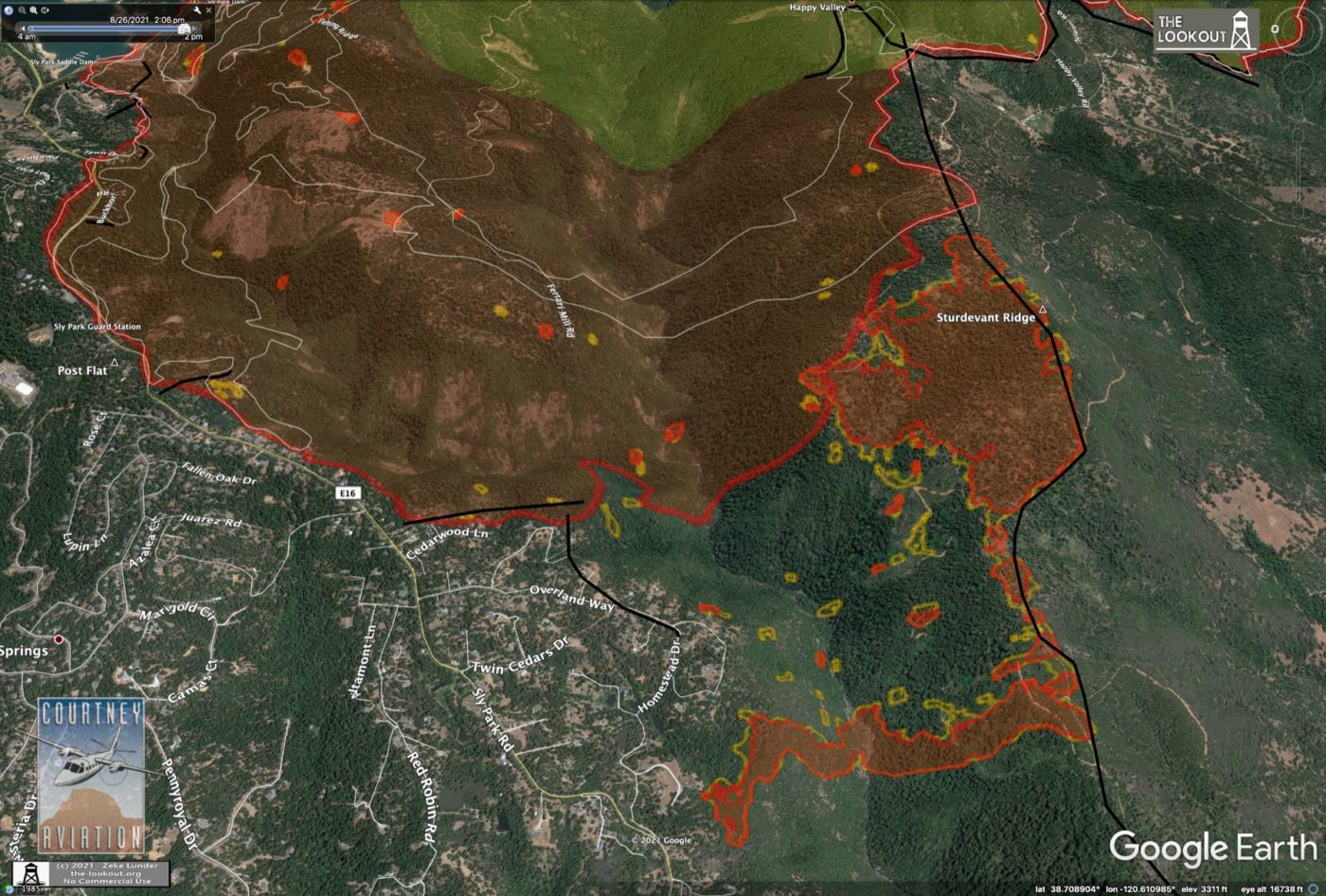 The area in Middle Fork Consumnes River fired last night is cooling off, with no new heat outside the area which was hot at 3:30am. 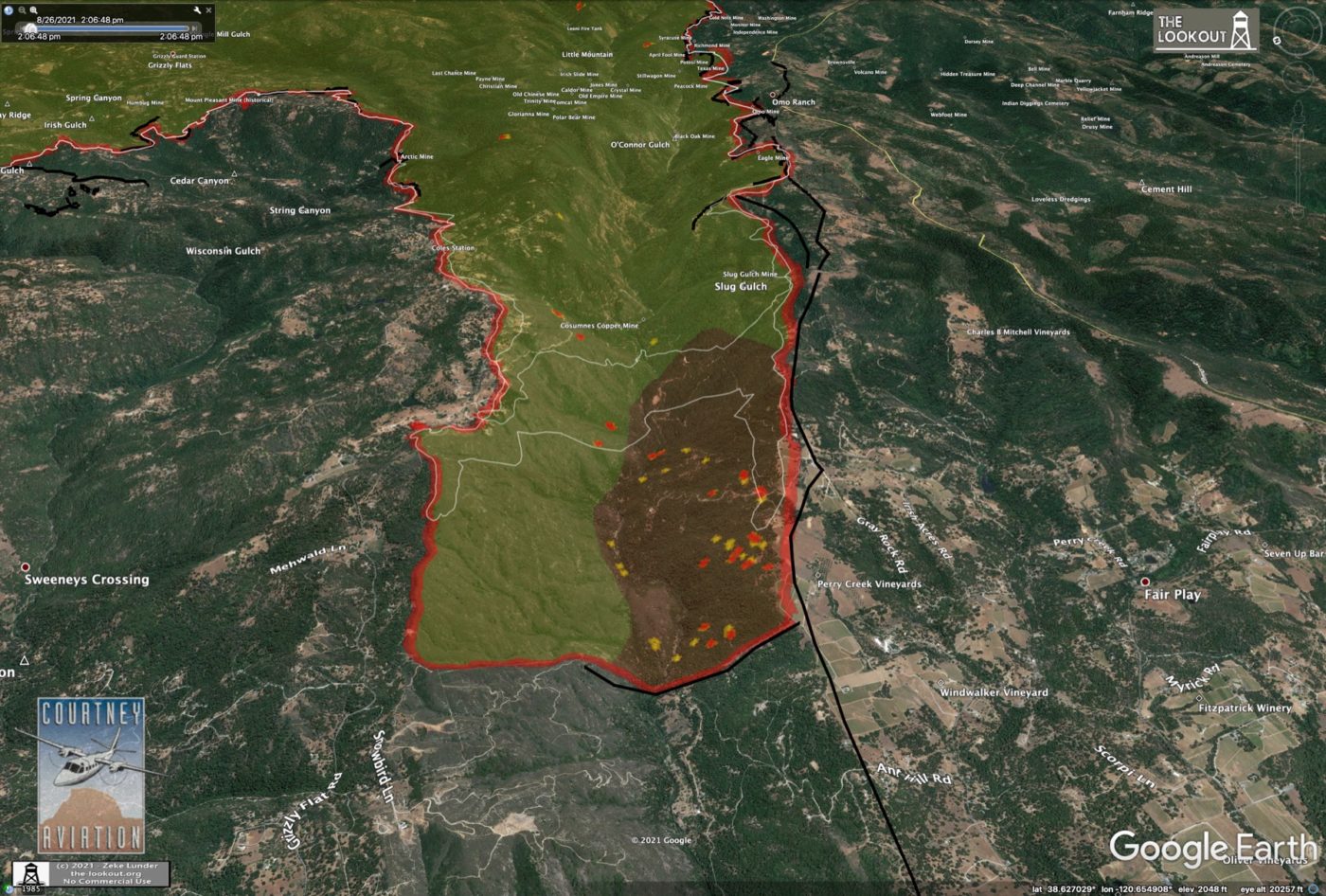 MAP UPDATE: 5:30am IR, 8/26/2021
Data from a 5:30am mapping flight flown shows extensive spotting over the bulldozer firelines into Cody Creek, southwest of Strawberry. Dozer lines are black in this map. Yellow outline is 5:30am. First white line is 3:30am, showing two hours growth on the spots. Consecutive white lines are 24 and 48 hour spread. Fire behavior is often subdued from 3-6am, so the amount of growth in this period is telling. Last night was dry and fire spread up to 1/3 mile upcanyon in two hours. 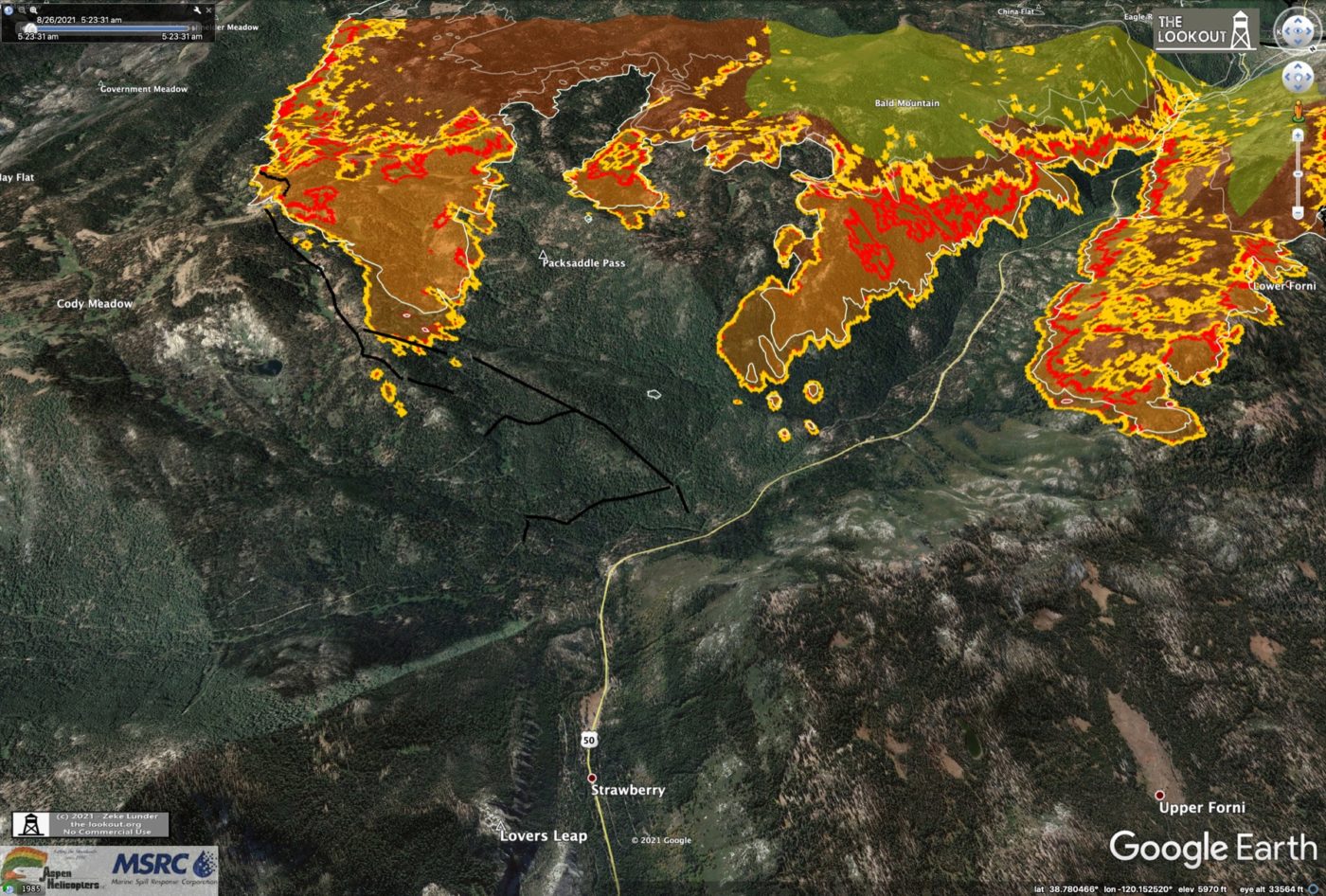 EARLIER:
Good morning.
Firefighters have done amazing work over the past few days to keep fire out of more communities on the west side of the Caldor.

The fire has burned steadily to the east over the past week. After a four mile wind and terrain-driven run on August 21, the fire slowed down a bit, moving east about 1.5 miles per day. One of the reasons for the slowdown is because it burned to the top of the mountain and ran out of slope to climb. Fires love to burn uphill, but going downhill takes more work. This same concept is playing out on the north side of the fire in the South Fork American River Canyon, where the spread down into the canyon has been quite slow. Here is a progression map, made by the mapping wizards on the Incident Management Team. 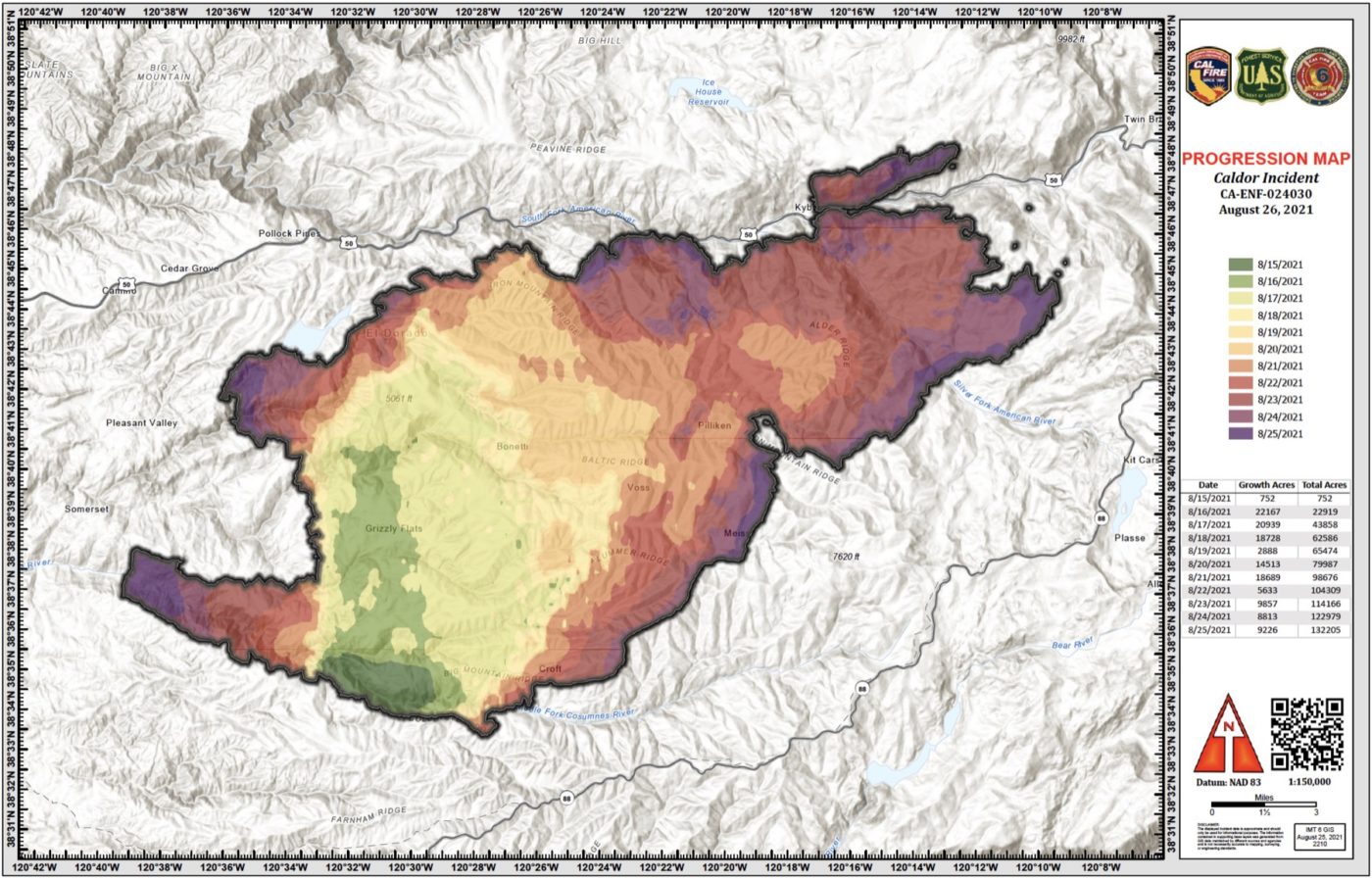 EARLIER: 3:30 am heat maps.
Below are detailed maps made from aerial heat scans flown August 26 at 3:30am. The two sets of white lines show the previous two days of fire spread. Yellow areas are scattered heat, orange areas have burned more recently and are hotter. Black lines are bulldozer firelines.

Overview Map: The winds have been mainly out of the west for the past week, and bulk of the fire’s spread and heat is on the east end. Much of the heat on the west end is the result of firefighters lighting off areas adjacent to the communities to remove the fuel between their control lines and the main fire. 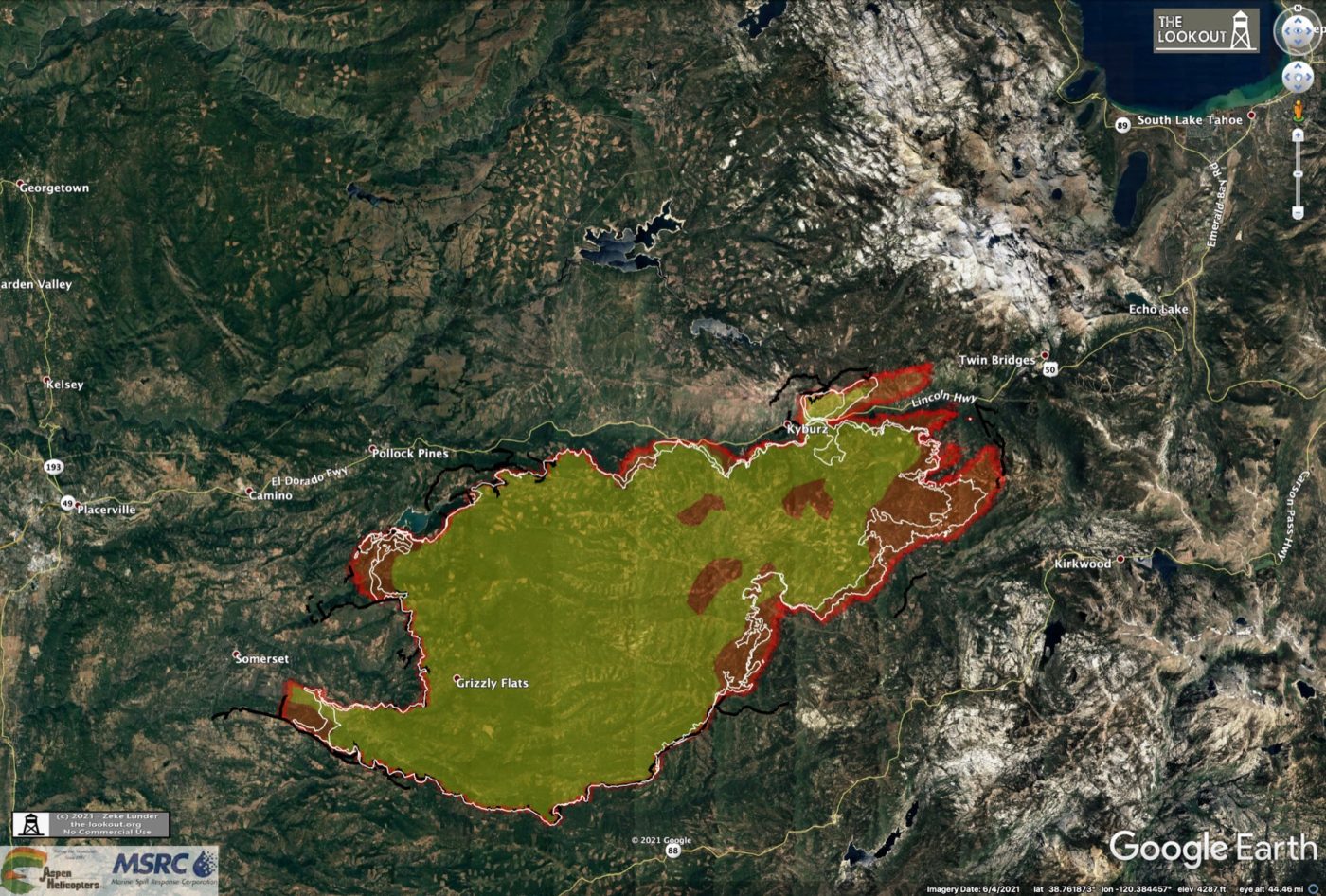 Looking west, down the South Fork American River Canyon. Kyburz is in center-right of this map. The fire made a three mile run up the canyon on both sides of the river yesterday. 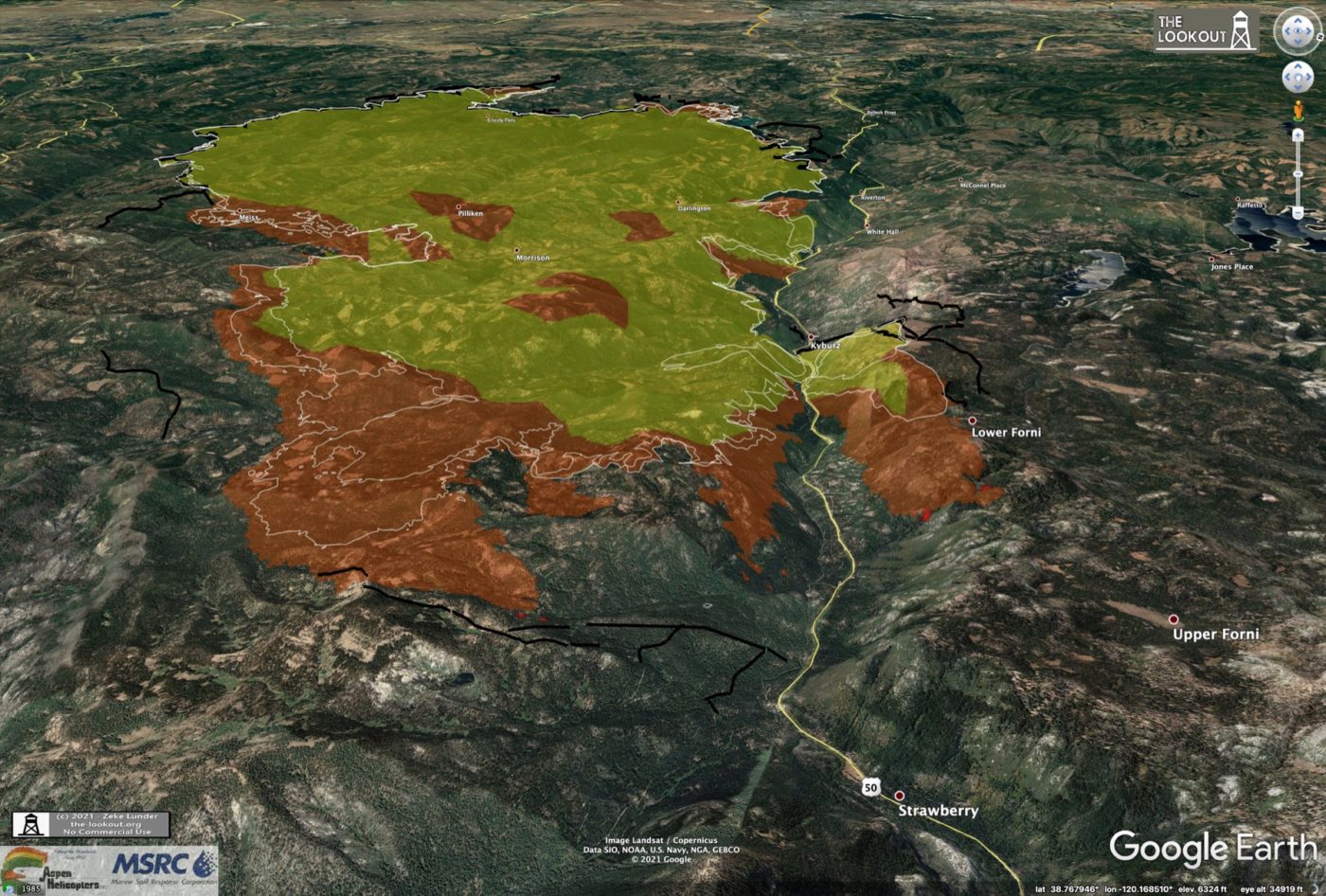 Starting at the SW corner of the fire, east of Somerset, the remaining maps will view the fire rotating in a clockwise direction. It looks like there was firing off of a dozer line down and across the Middle Fork Consumnes River. Firefighters have been successful so far in keeping the fire in the canyon. White lines show past two days of fire spread. 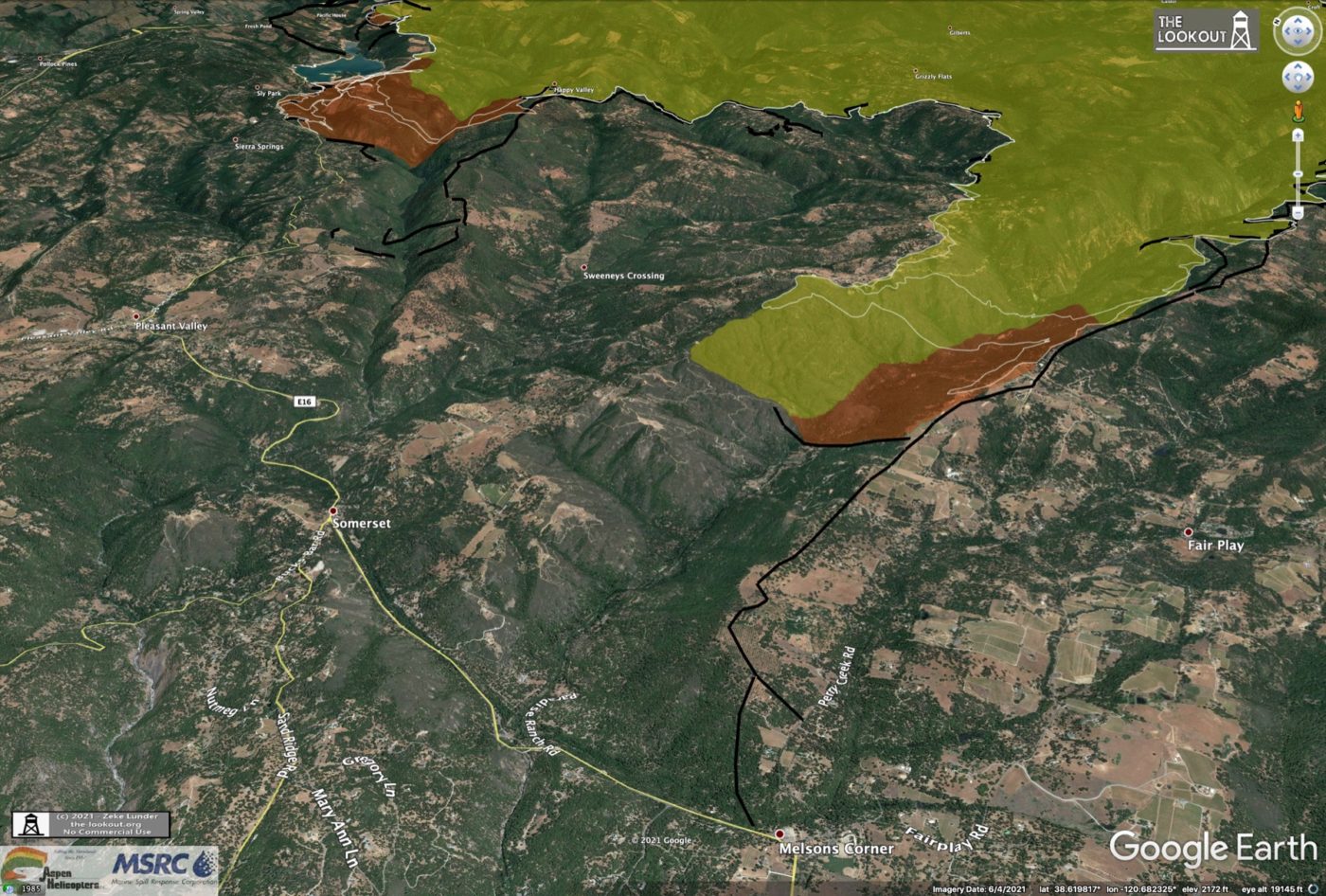 The west flank of the fire , west of Grizzly Flats has been cold for at least five days with no significant spread south of Happy Valley. The area of intense heat on the left is the result of ongoing firing operations in Camp Creek below Sly Park Dam. 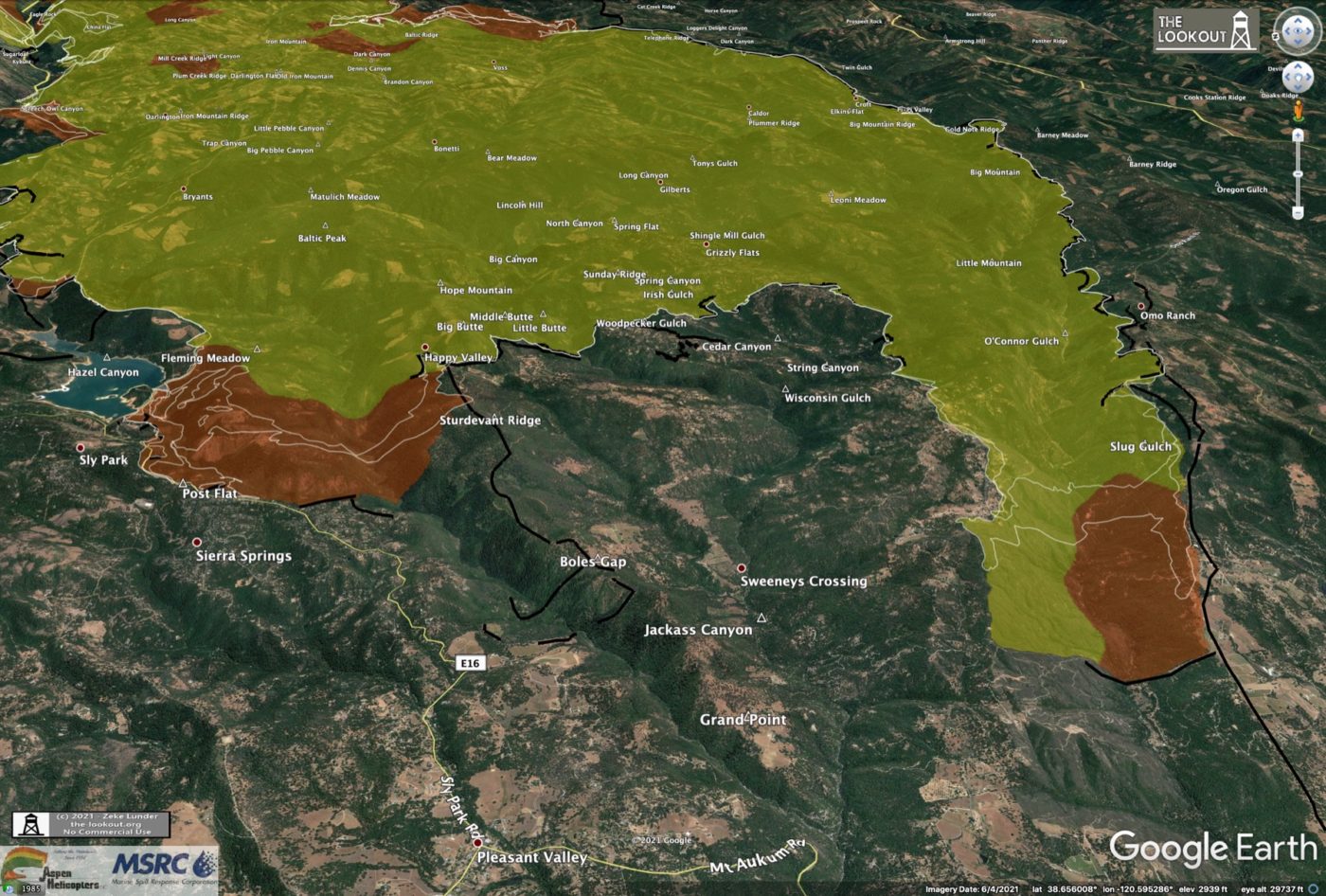 Closeup of Sly Park Dam and downstream, looking east. Firing continues and things were still being kept out of the neighborhoods at 3:30am, 8/26/2021. 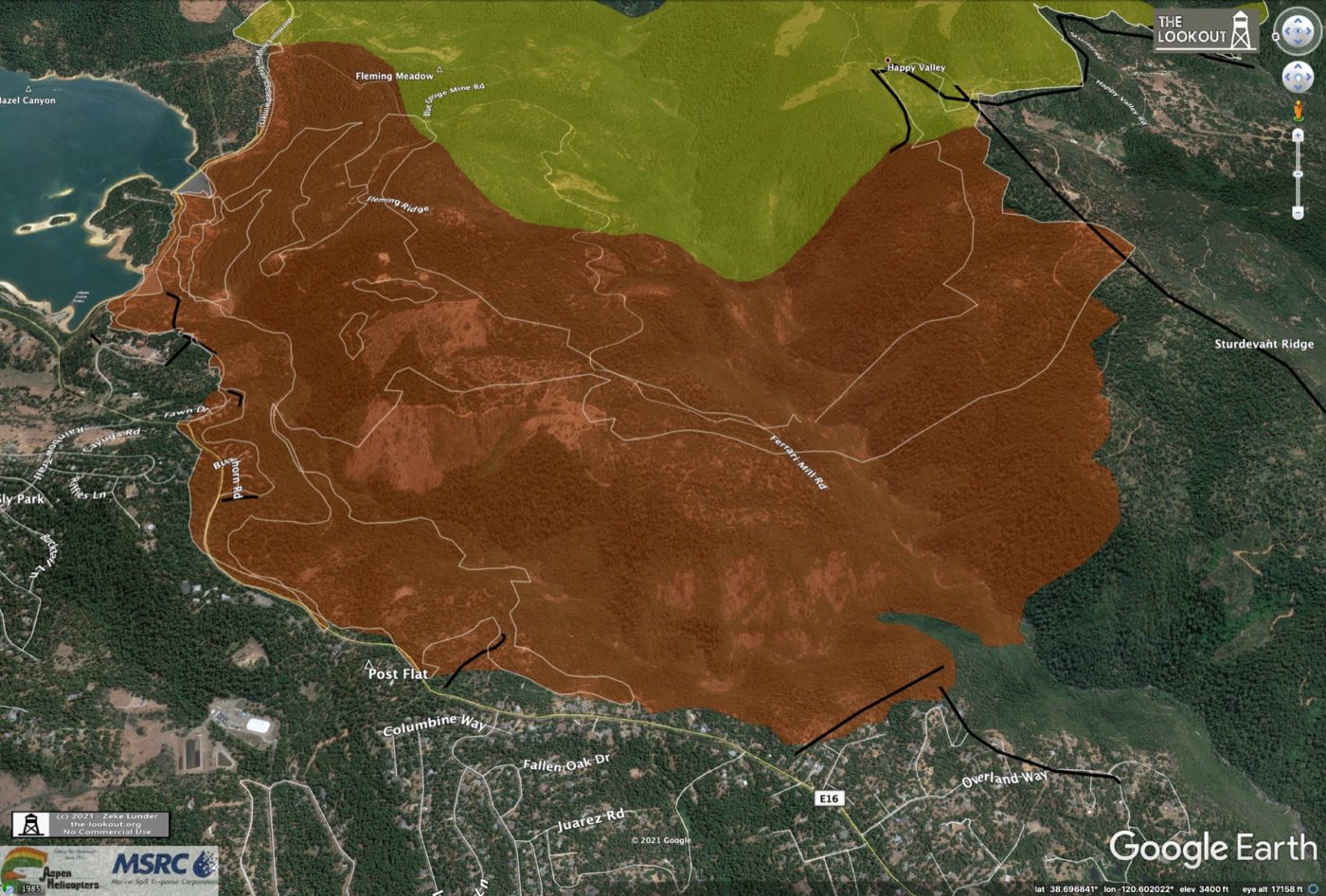 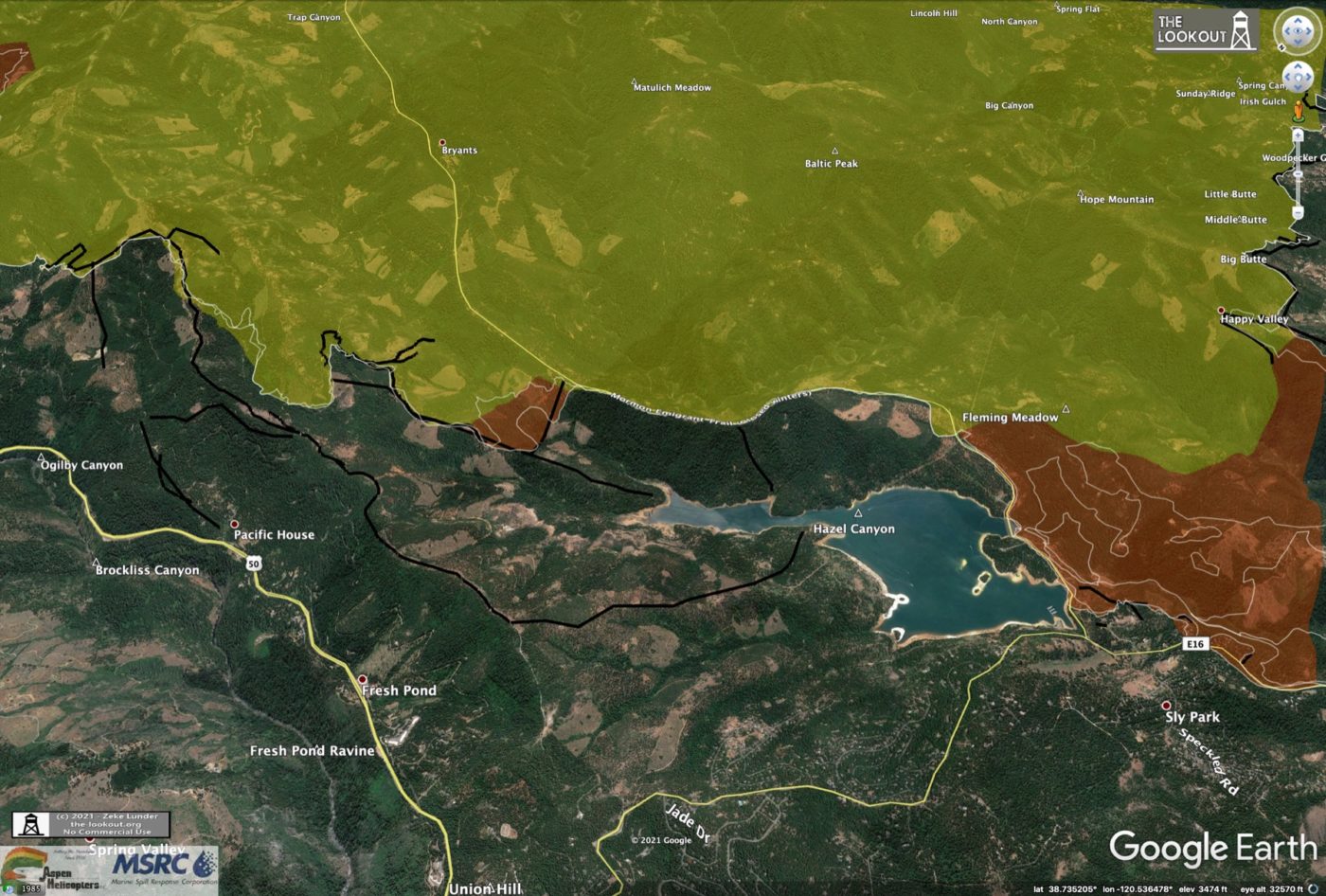 Many areas on the north side of the fire have not spread for several days. Orange areas are more active. View is to the southeast. 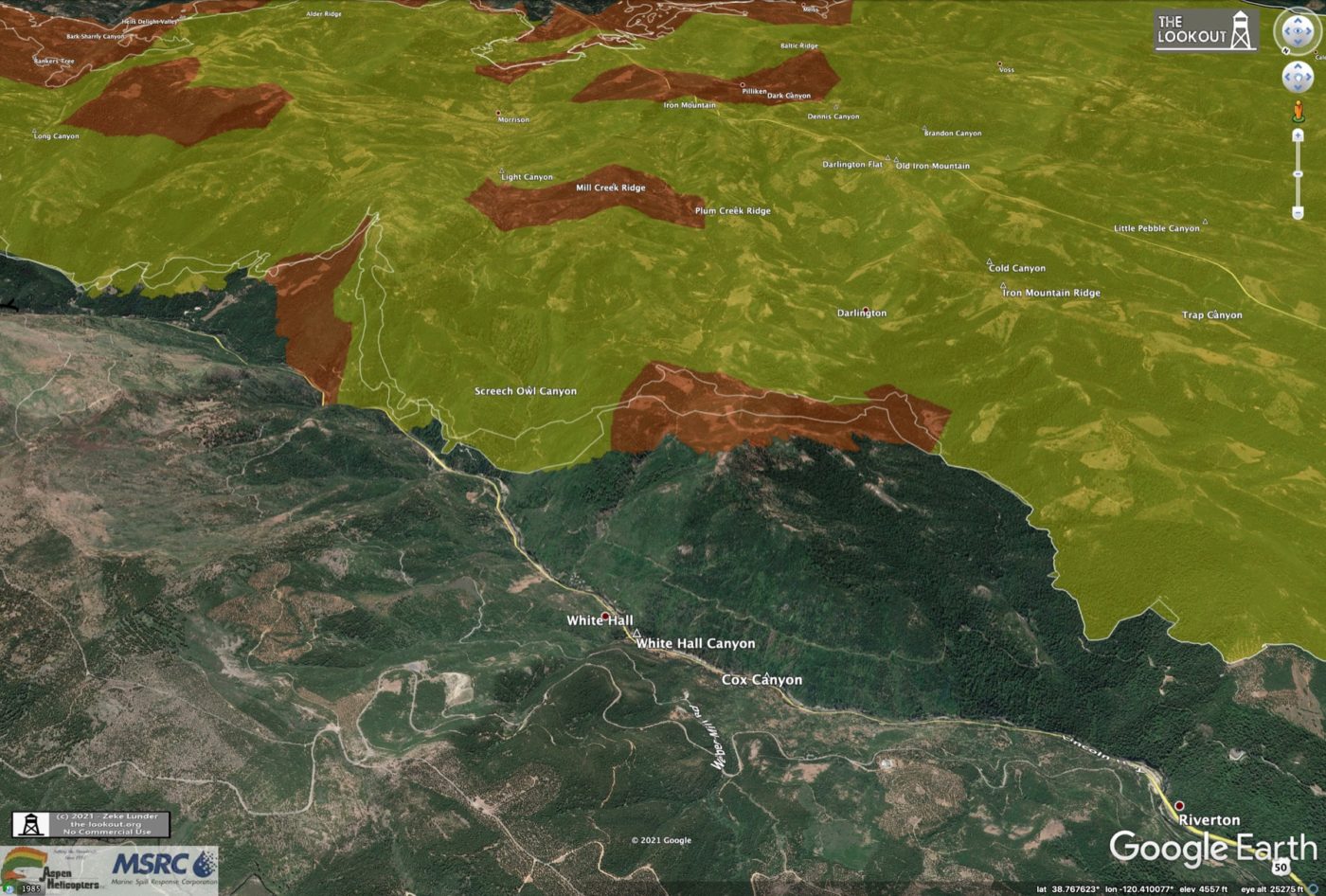 Looking NW over the three miles of fire that ran upcanyon yesterday where fire was spotting 1/3 to 1/2 a mile ahead of itself. This is problematic for keeping it inside the bulldozer firelines built upcanyon. 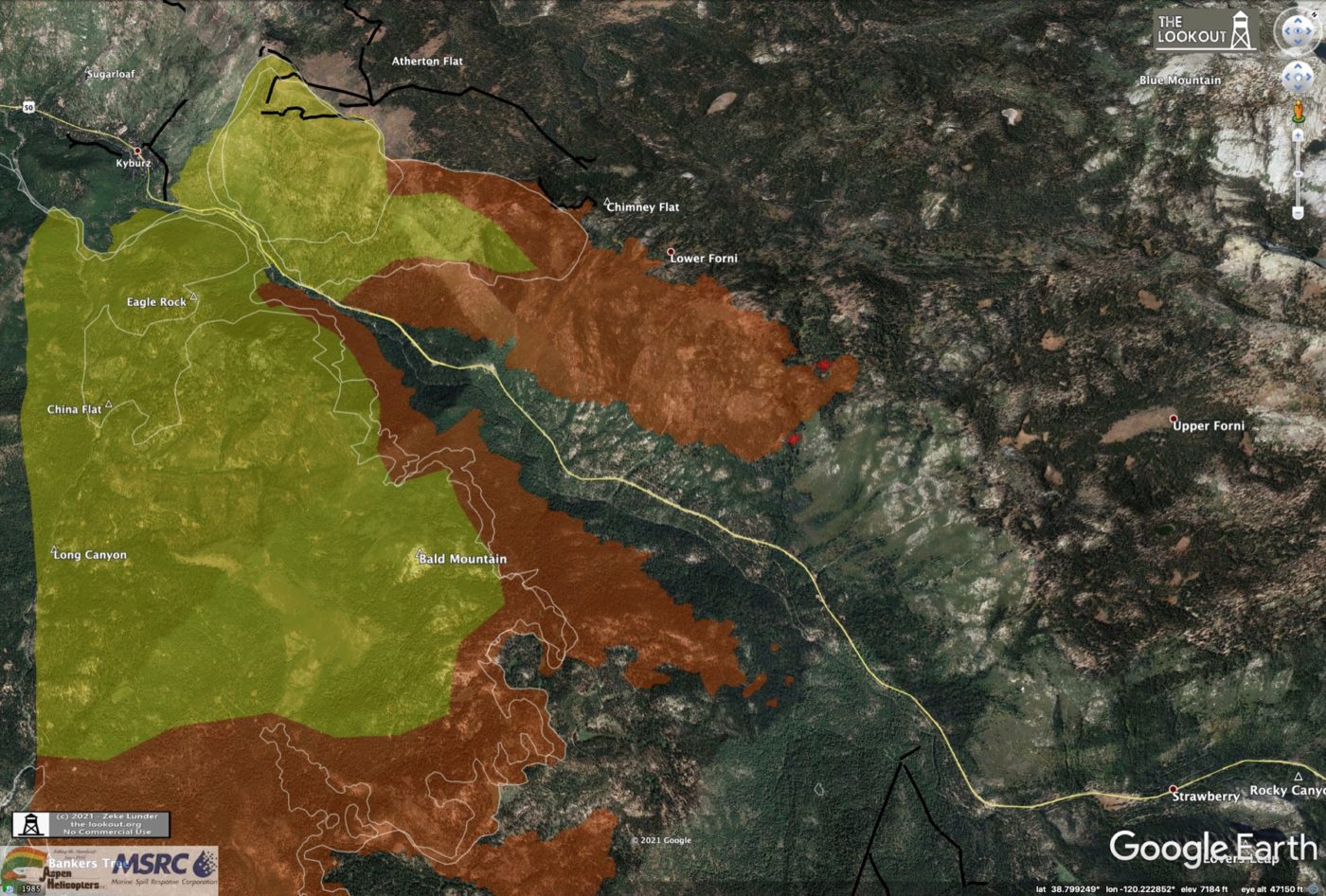 Looking SW over Strawberry. The fire is approaching bulldozer lines built on the south side of the canyon. With the spotting we’ve been seeing, these lines will only be effective if we have sustained east winds that will support a firing operation. Given recent spotting distances and rates of spread, it’s upcanyon winds this afternoon may carry the fire over these lines. We have not had much air support on this flank due to poor visibility under the smoke columns. 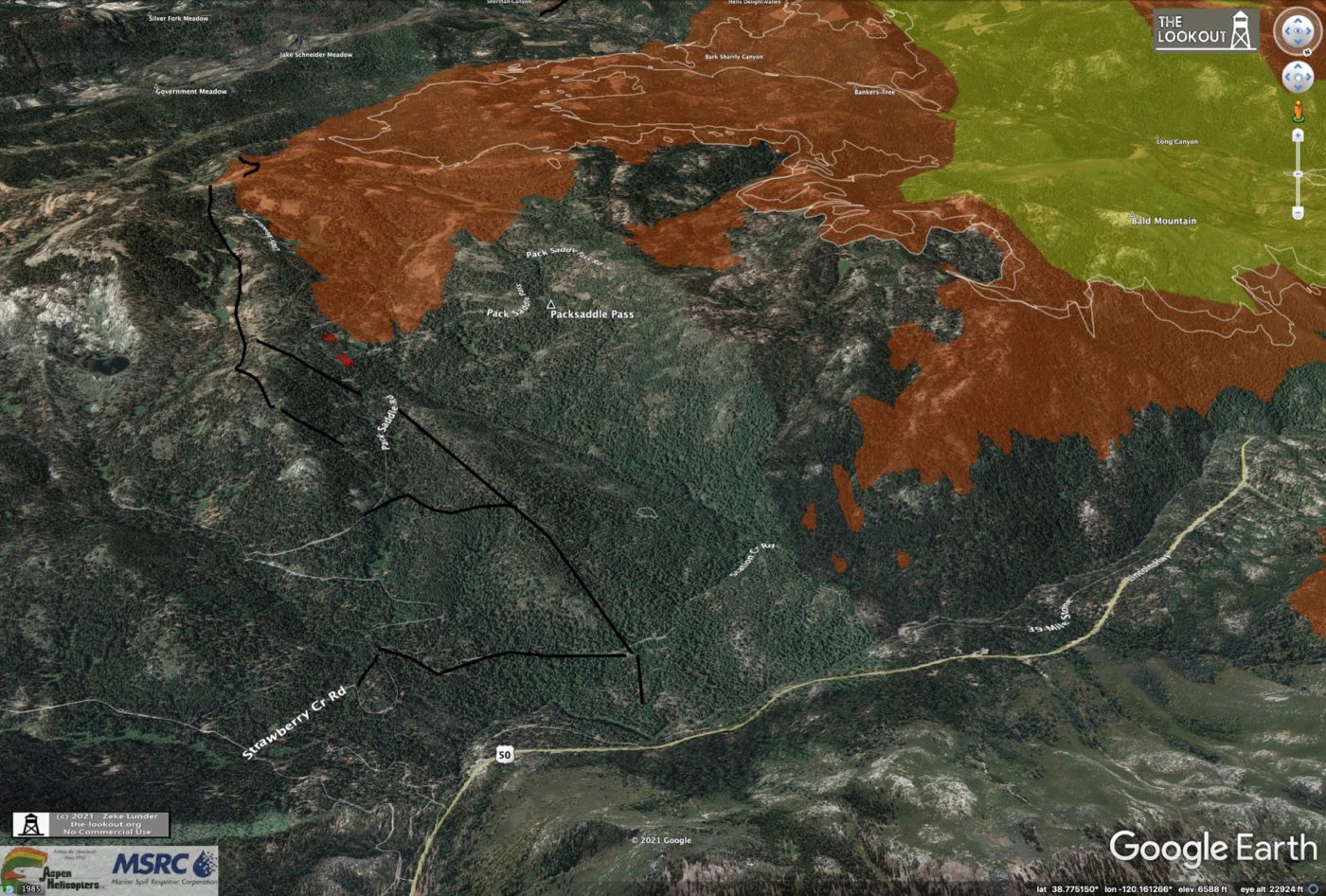 Since the fire’s big run on 8/21/2021, growth has been mainly to the north and south of the eastern head. This resulted in the fire really having three different heads. White lines on this map show past two days of fire spread. This view looks NW, with Kyburz in center of map. 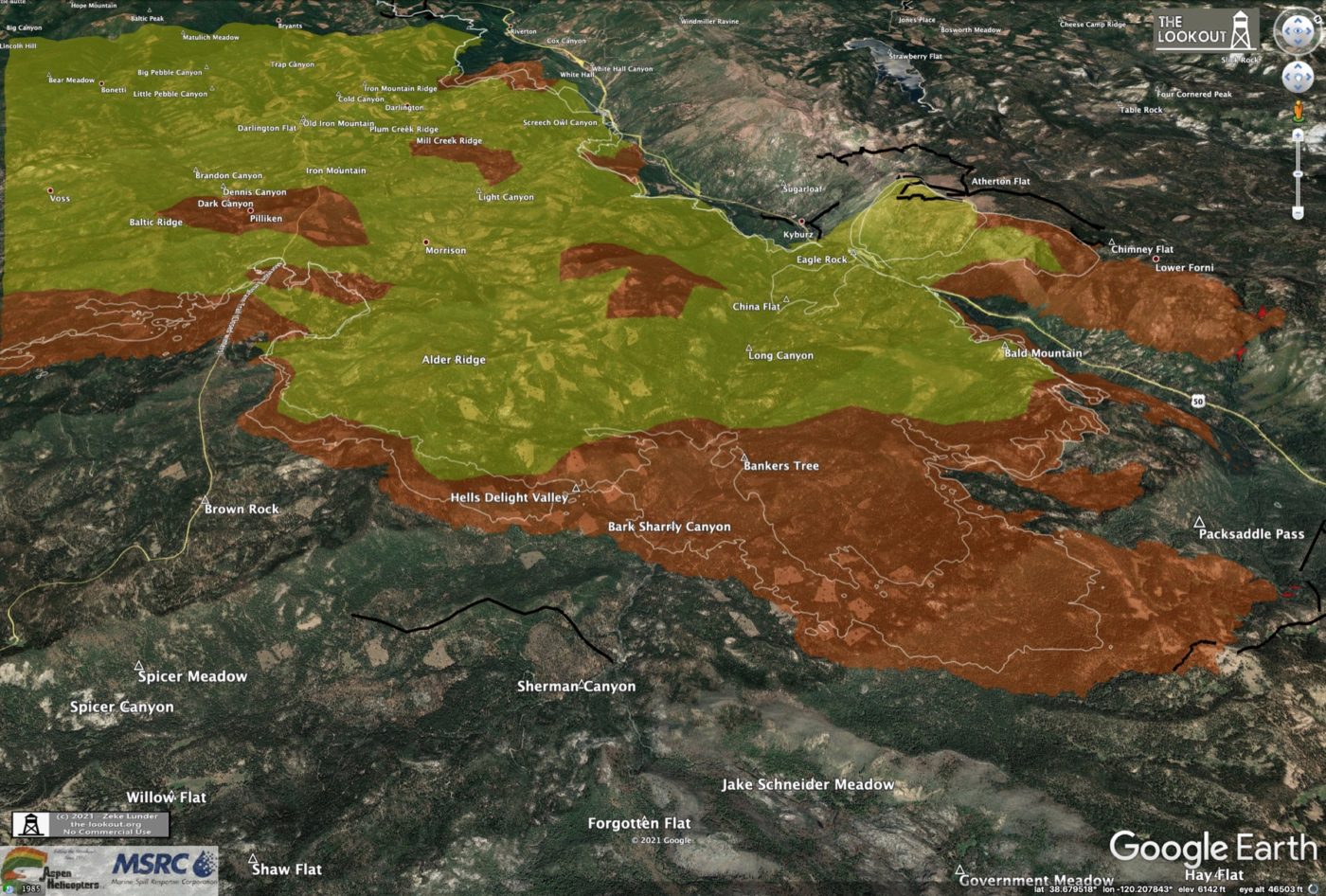 In the area around Meiss, there has been steady flanking spread, burning to the side of the fire and perpendicular to the direction of the winds. This spread is primarily the result of very heavy fuel loading in the forests here. Large hot flanks like these are dangerous because they can become a new head for the fire if we get a major wind shift, for example out of the northwest. This wind isn’t forecasted, but it’s worth pointing out. This area of the fire has been a lower priority for suppression because the limited resources are focused on protecting the highly developed areas along the Highway 50 Corridor and west of the fire. 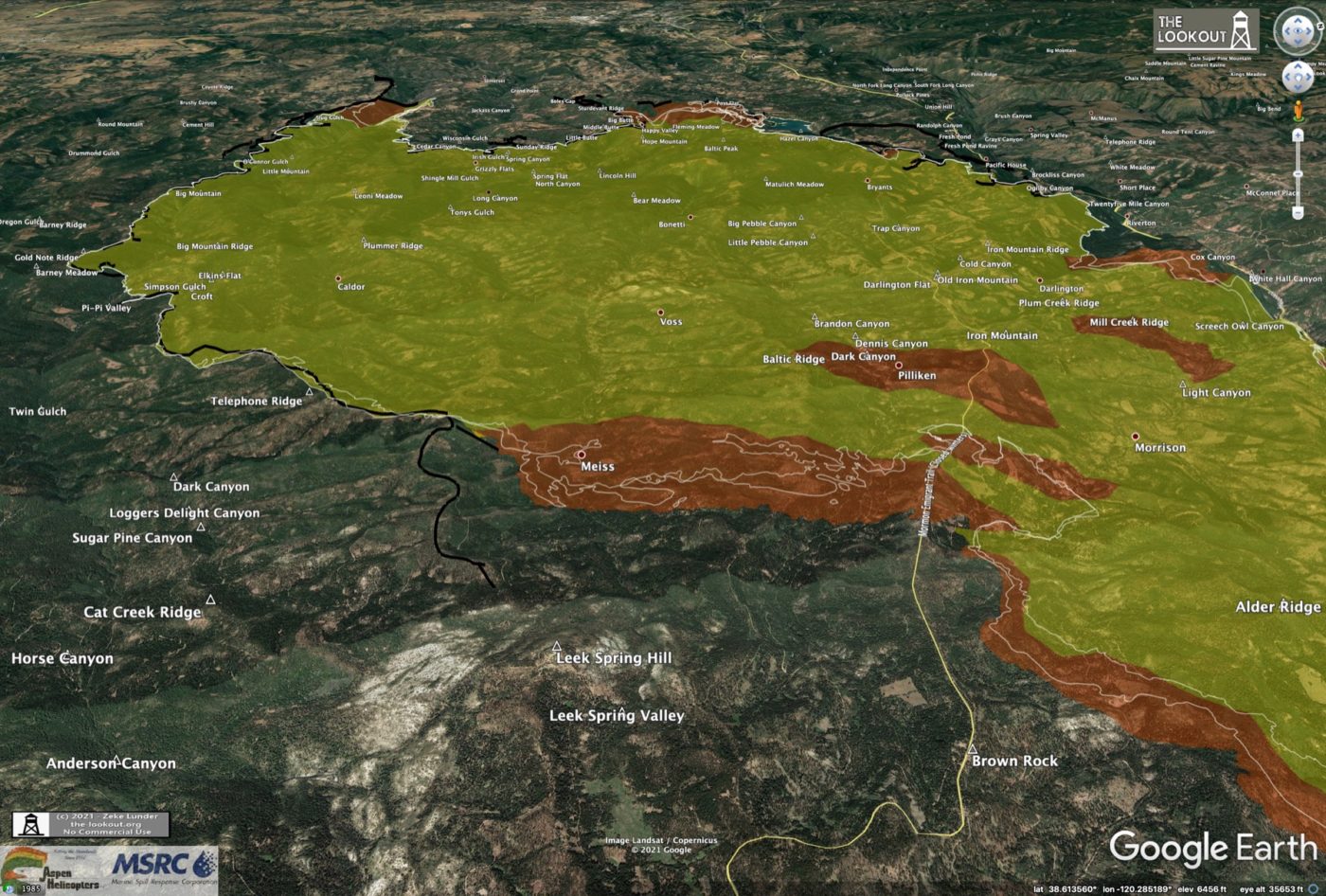 The south flank of the fire is still pretty cold, with no new spread here for several days. 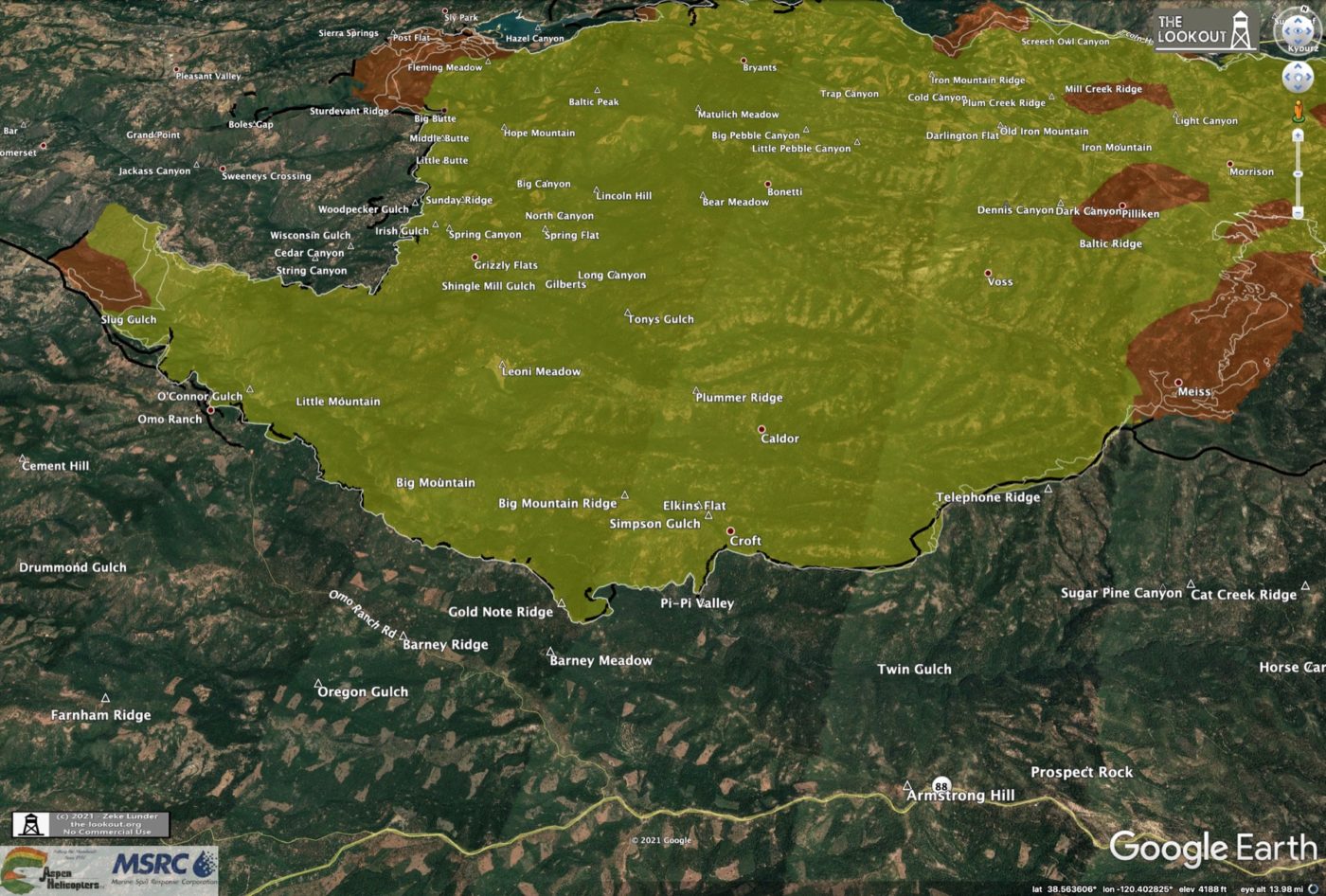 Back at the head, looking east toward Tahoe. The fire is 7.5 miles from Echo Summit. 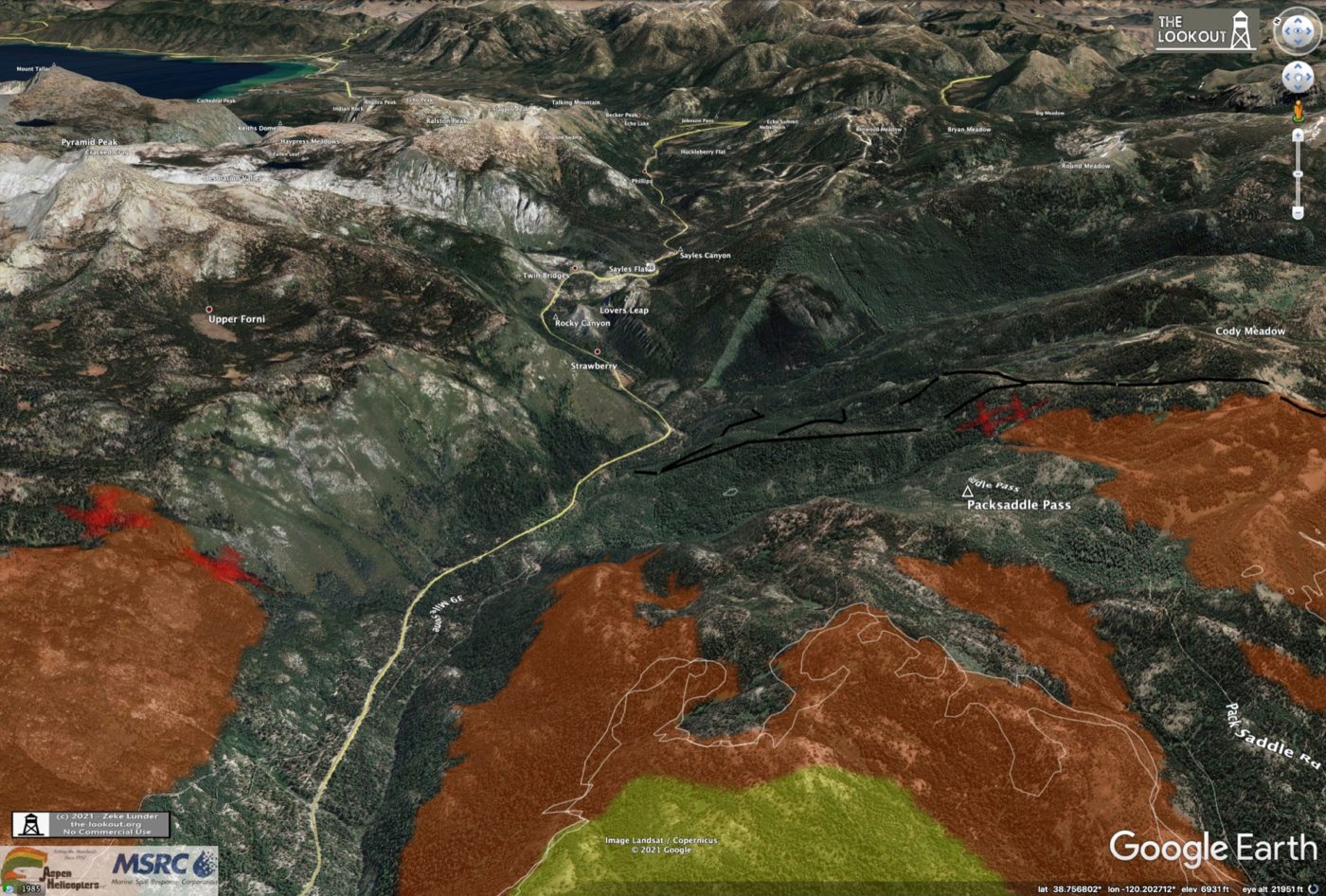 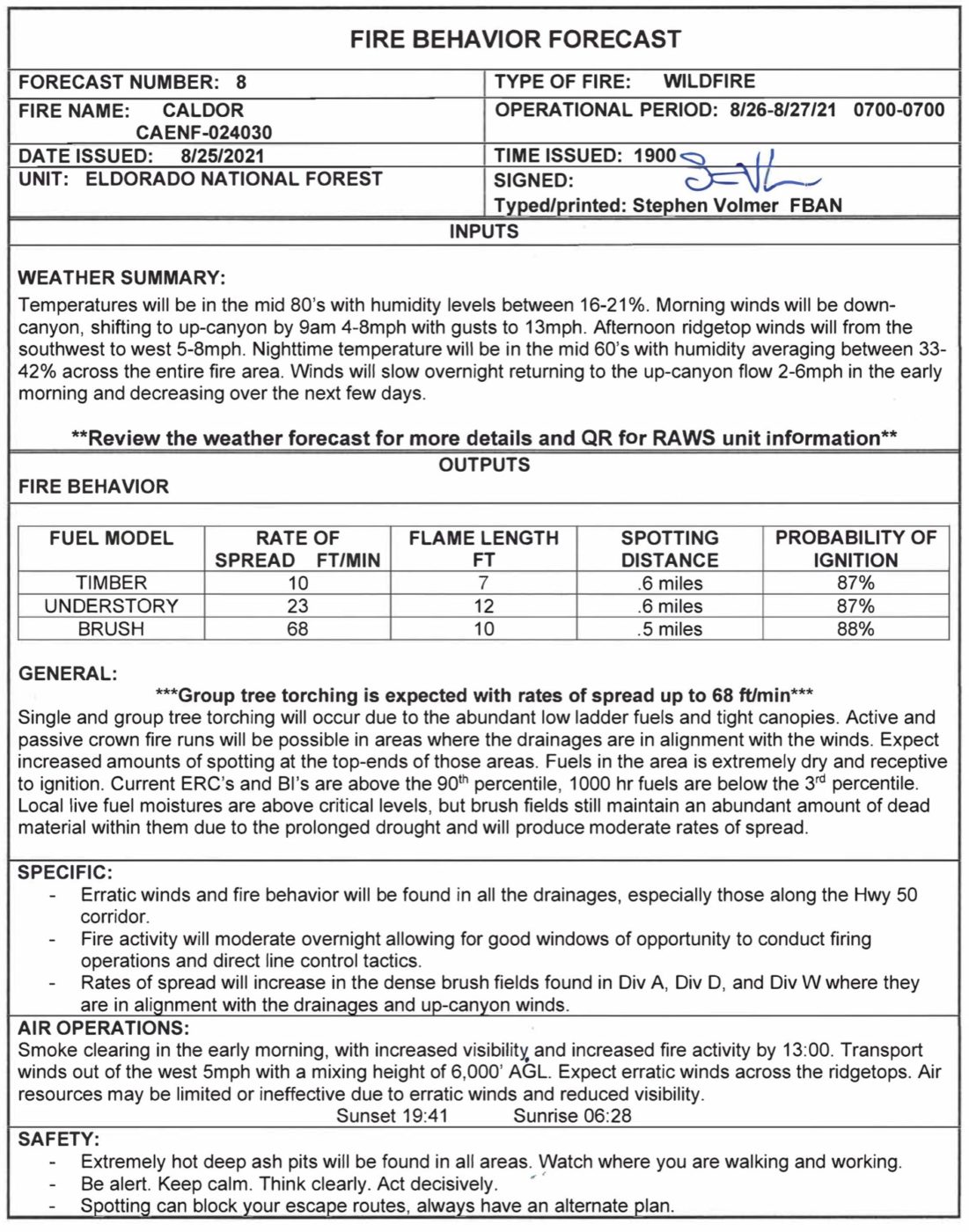