11am update from a knowledgeable local via wildfireintel.org:

Pretty quiet this morning in Pine Flat. Fire made it to the northwest part of the community near Flying T and Rocking K yesterday, but there were no issues. Tons of resources remain in the community doing various prep work. Otherwise no fire has entered Pine Flat. Very smoky conditions still exist. Winds pretty much calm. Fire remains well north of M56 and King George Peak as well at this time. Pretty quiet right now. 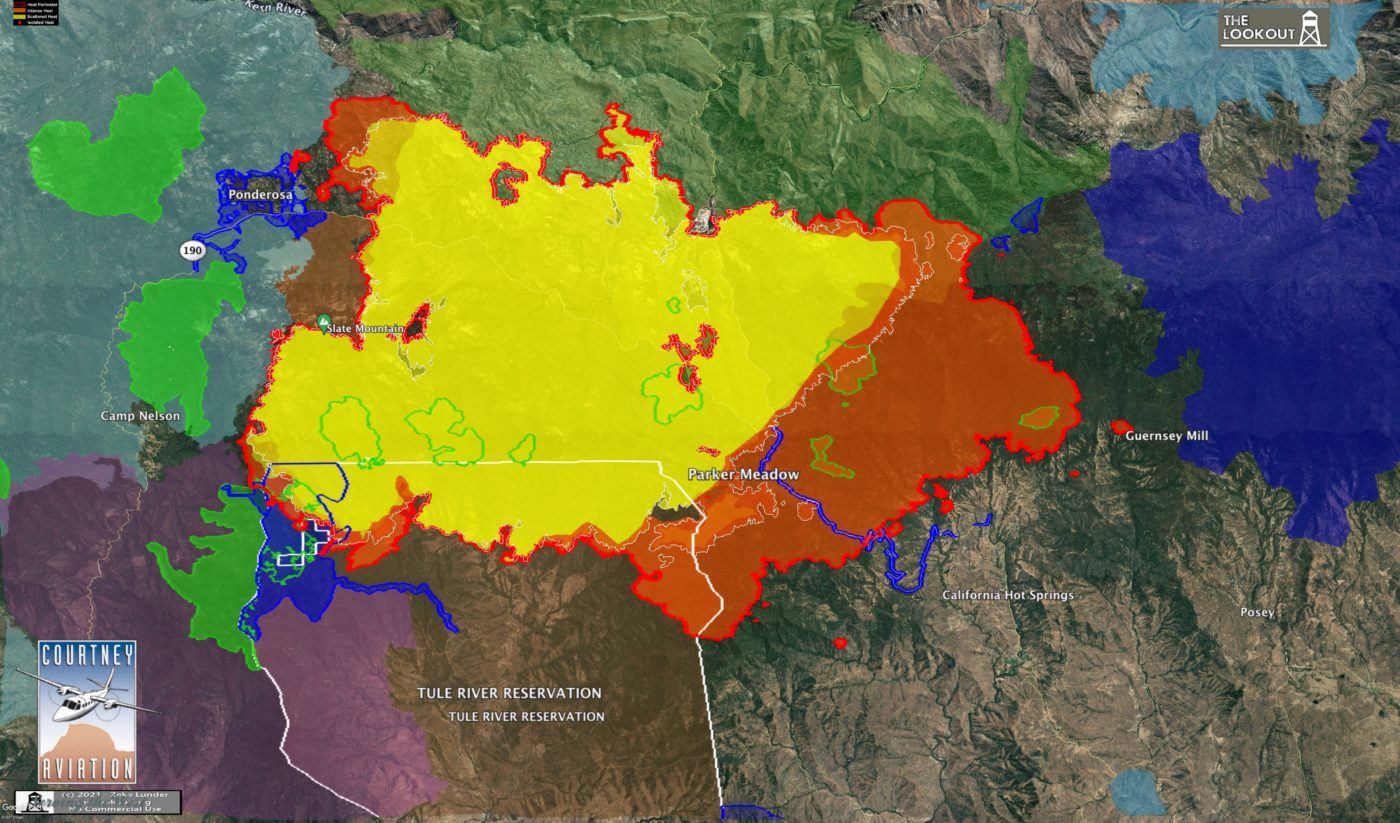 ***September 25 at 6am, Commentary from Chuck Ervin

The Windy made another big push on the southern flank yesterday.  Usual west ridge winds and up canyon flows did not occur, allowing the fire to turn away from the southern progression and head west.  The exact method of spread is hard for me to determine as remote cameras in the area pictured nothing but haze.

The conditions now are that there is a very large flaming front, with few natural barriers to spread.  Advance spotting has placed fire in very inconvenient areas for the fire suppression effort to deal with.  Heavy tree mortality in the wooded areas (~4500ft+) represent a hazard to holding the fire up high, meaning the best opportunities for control will be using dozers in the blue oak savannah.  That brings the fight much closer to structures.

The image below was taken from Google Earth imagery above the Sugarloaf Sawmill shows a close up view of just how bad tree mortality is in this region: 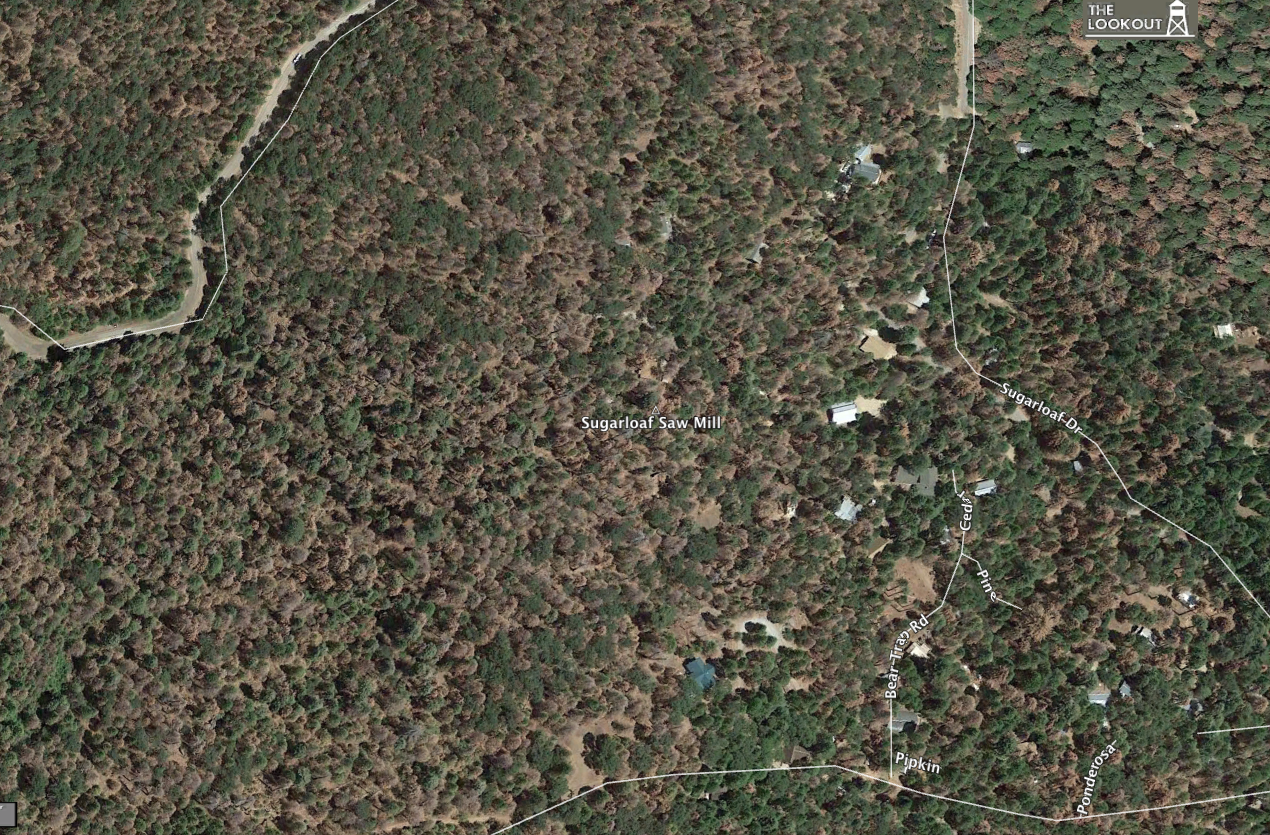 The clock has also been advanced, as the main body of the fire will reach light and fast burning grass near Pine Flat soon if not already.

Including this report, we have seen three days of four-mile linear growth of this fire. I think it is a fair assumption then to consider that the fire can spread four miles to the south or to the west today.  This is in line with the latest evacuation order that was put out at 10am yesterday.

The map below shows distance of spread on the southwest portion of the fire in the past 24 hours: 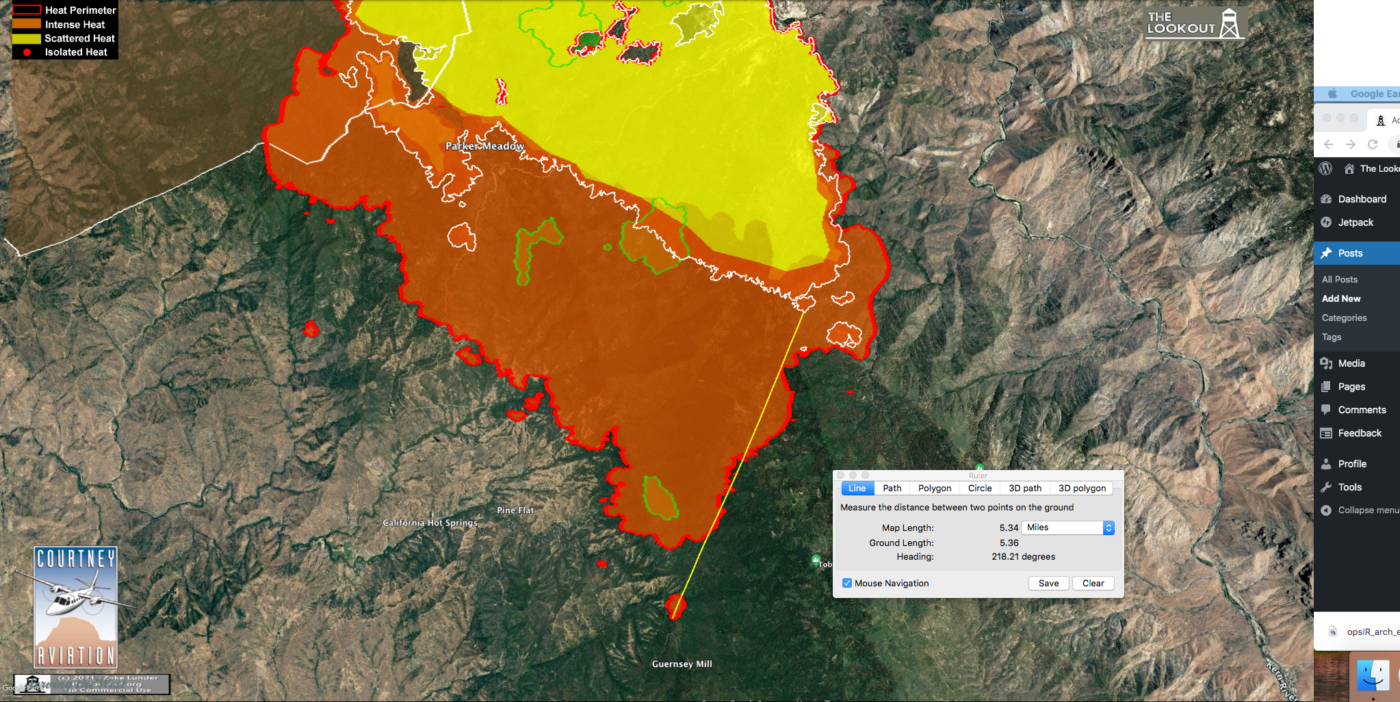 Windy has been burning in relatively unpopulated areas since the fire began. Yesterday’s growth brought Windy within reach of multiple communities, both in the southwest (see evacuations at the bottom of this Windy update) and northeast (Ponderosa).

Below is a view looking east from California Hot Springs in the lower left and Pine Flat in the middle right of the image: 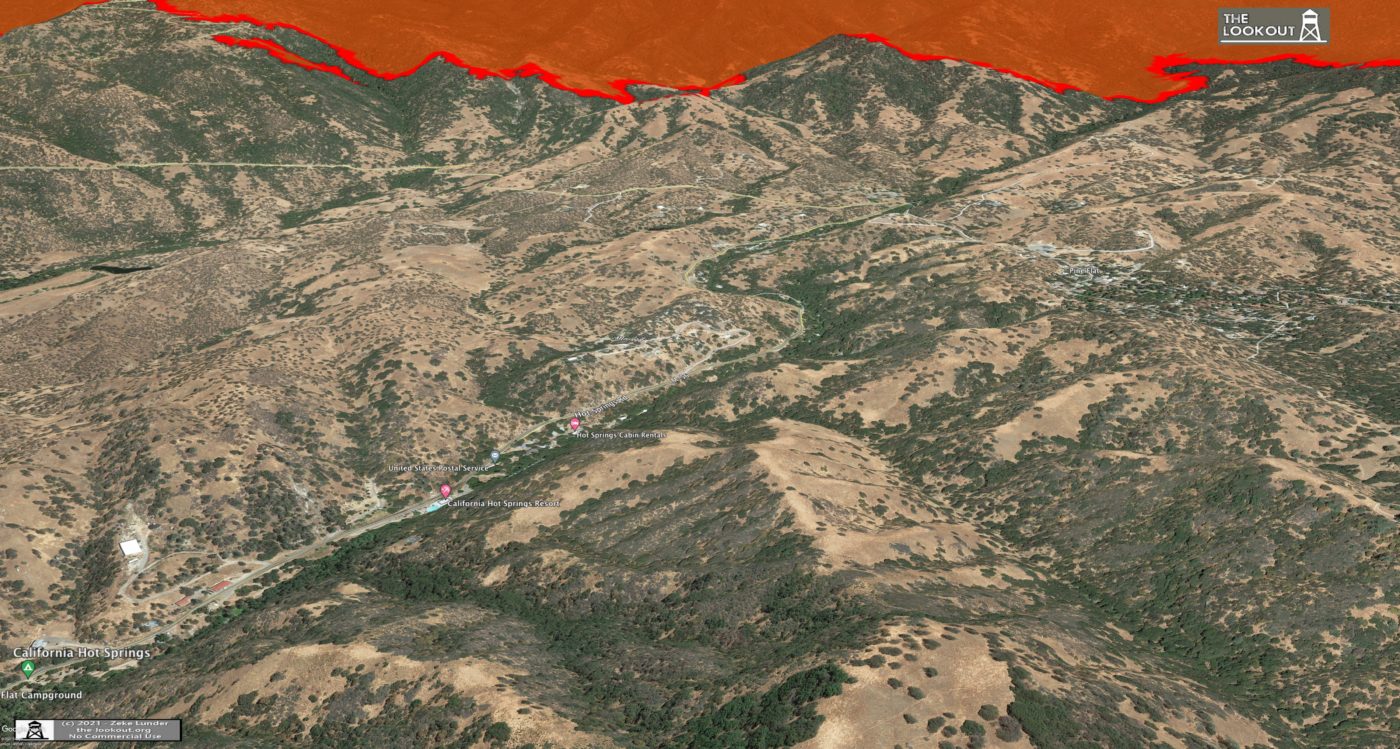 Below is an image looking south from Ponderosa. The community is surrounded by Rx prescribed fire and the 2020 Castle Fire. It’s going to be very interesting to see what happens here in the next few days. 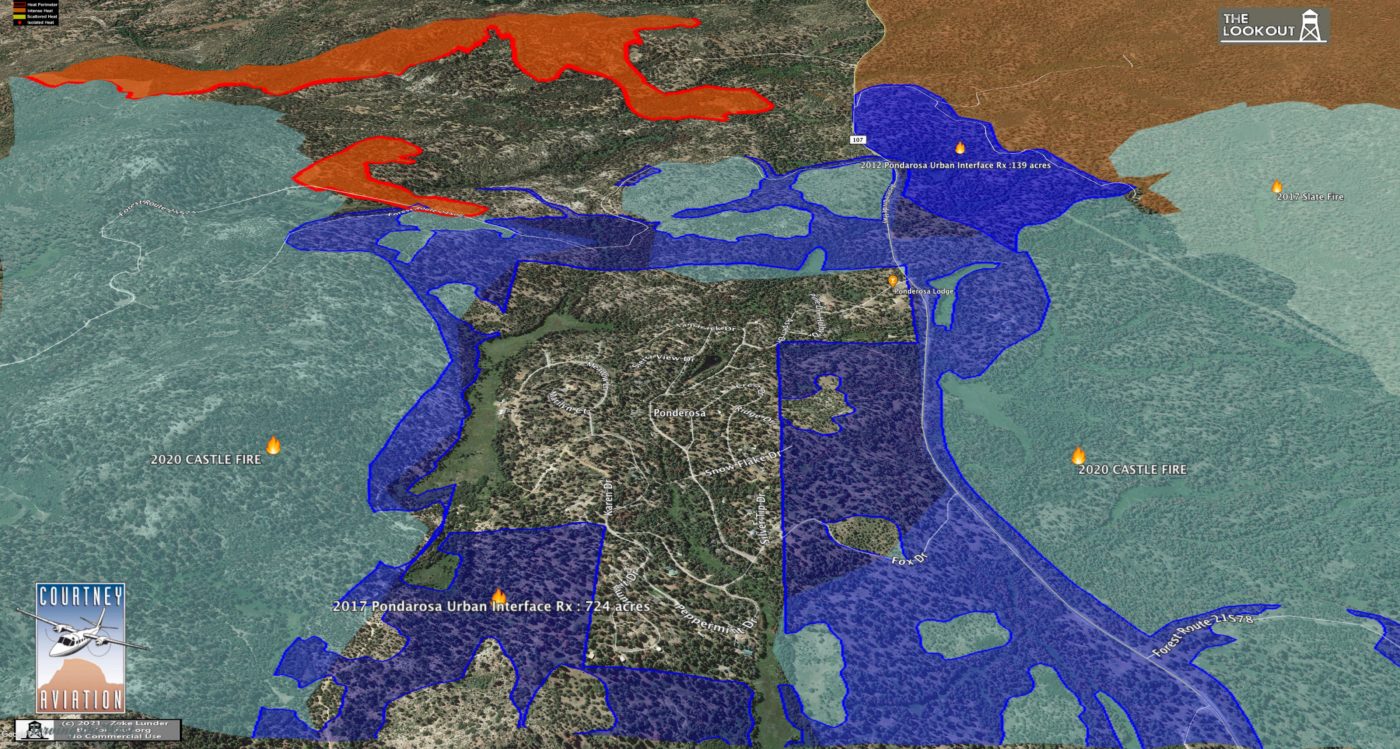 If you use Facebook, the Tulare County Sheriff’s Office posts updates and evacuation information.

Additional information regarding the Windy Fire can be found here: https://inciweb.nwcg.gov/incident/article/7841/66764/

The map below shows us a day to day progression of the fire. Dark green shows the first 2,200 acres burned on September 14 and the colors progress to yesterday’s growth in dark red around the perimeter: 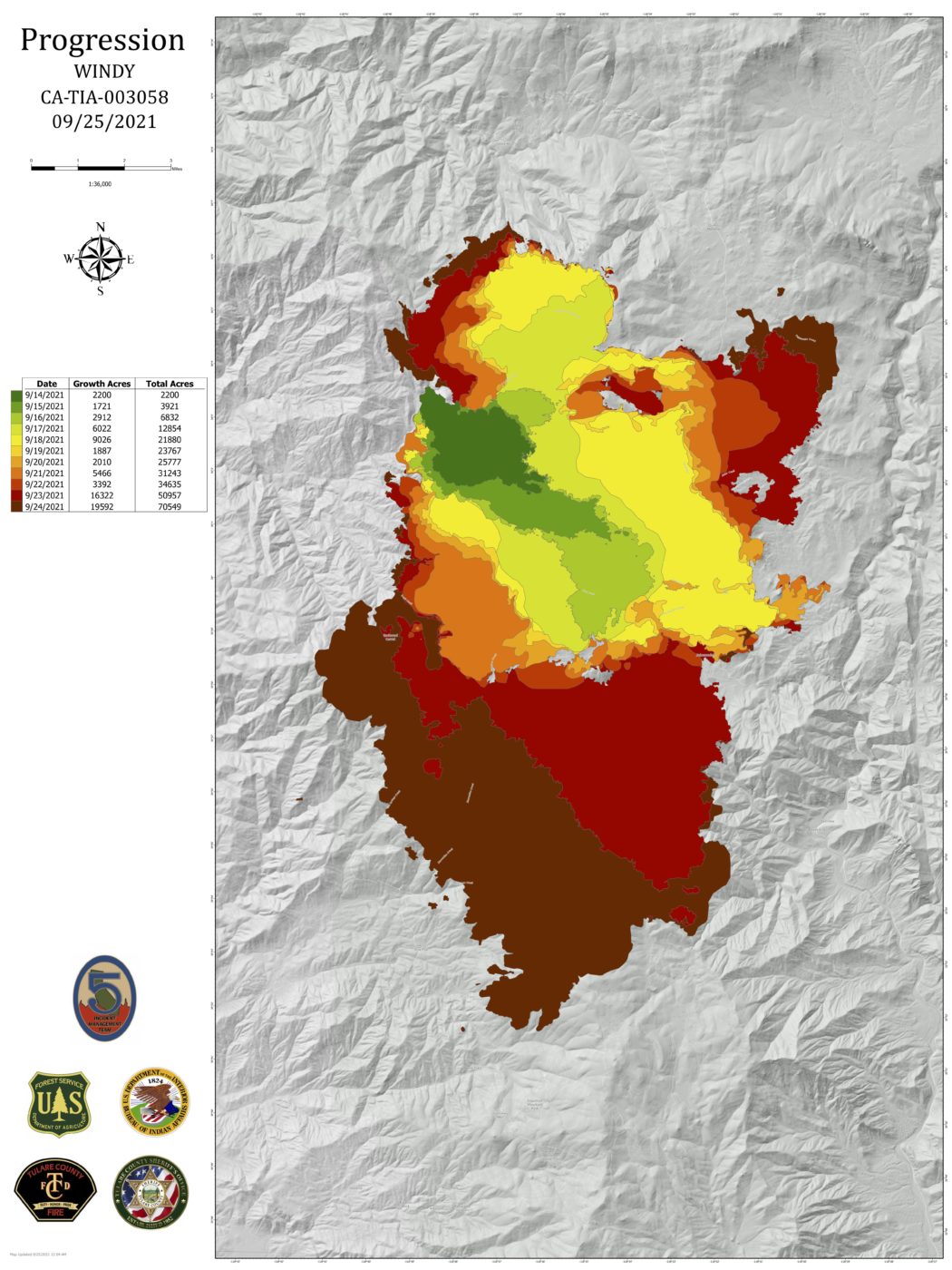 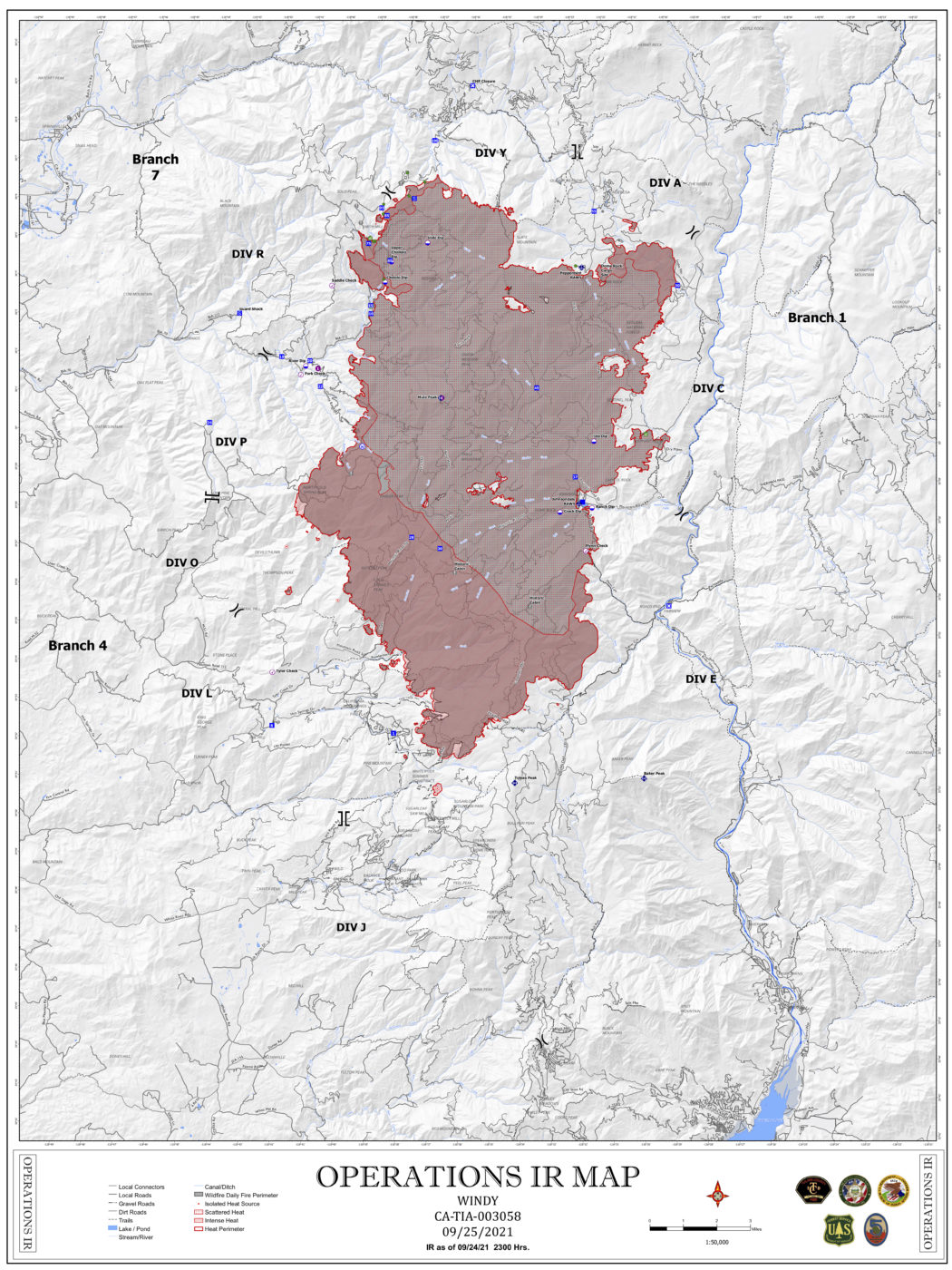 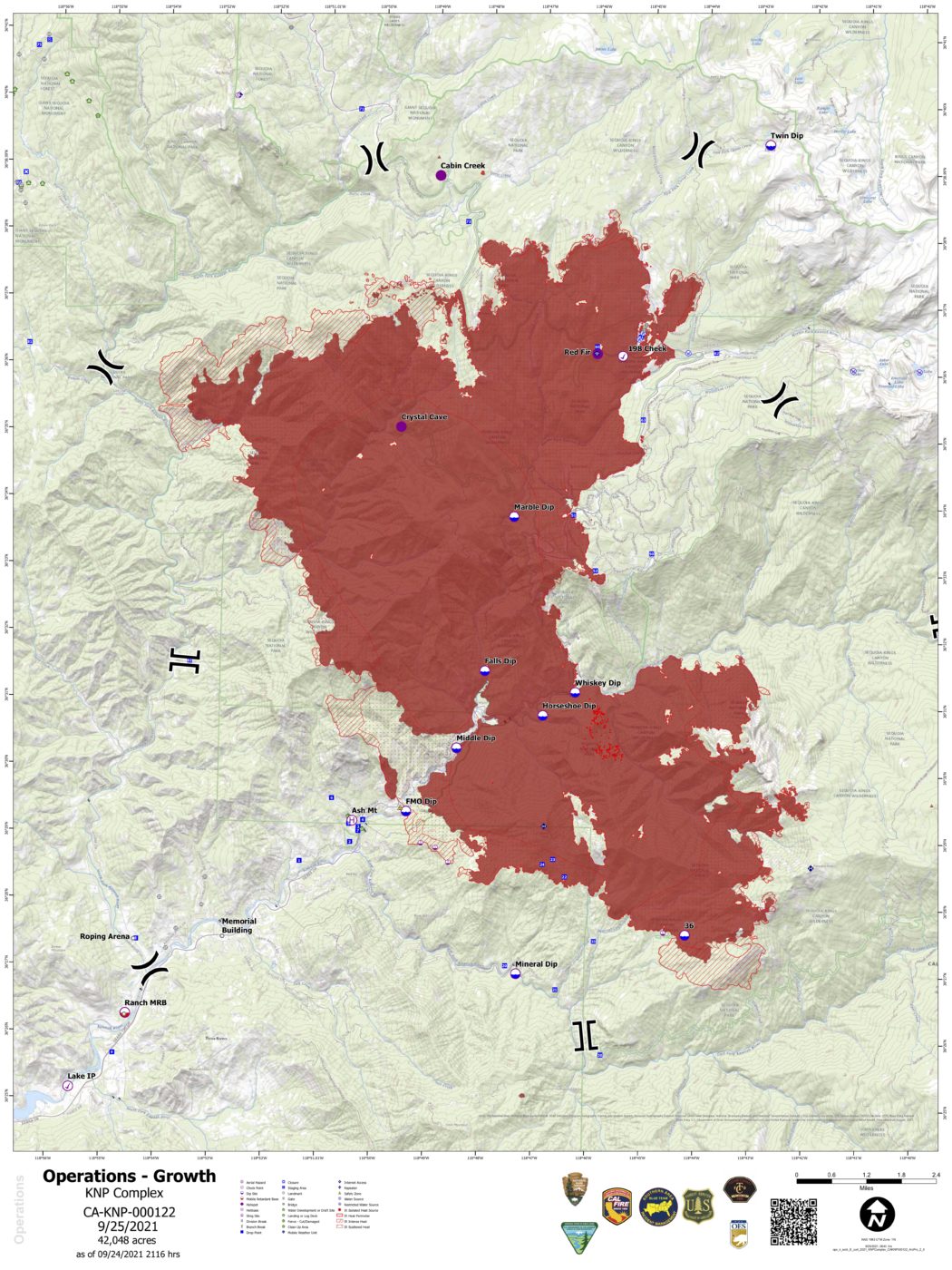 ***September 25 at 6am, Commentary from Chuck Ervin

Defensive firing near Ash Mountain yesterday appears to be holding well.  There is some intense heat and growth as we follow the line north over the Ash Peaks.  North along the Shepherds Saddle Road, the fire is still on the park side of the N. Fork of the Kaweah, near the confluence of Burnt Creek.  Rounding the bend in the N. Fork, there will continue to be potential for rapid spread in the continuous lower oak and chaparral  down towards the north east corner of the park.

Spotty spread and intense heat can be seen following Pine Ridge up towards the Durst area.  Extension of the fire into high country on the eastern flank continues to be slow.  Little heat or spread was seen from Lodge Pole, down through the Giant forest to the Middle Fork of the Kaweah.  However, today’s briefing map for the fire suppression effort does not show any black lines that typically indicate containment.

The exciting part of the fire yesterday was on the Paradise side, where a downhill run followed Redwood Creek towards Mineral King Road.  This spurred a rumor that the fire had crossed the downhill side, which was seen in various social media.  Today’s IR does not confirm that rumor.  This extension of the fire is troubling, as the ground here is extremely steep, with granite cliffs that make for difficult access and potential for burning material to roll long distances into receptive fuels below.  The concern here will be ember fallout spotting fire over Mineral King Road, which is very possible with relative humidity in the teens and fuels stick bouncing between 5 and 6 at Ash Mountain and Wolverton RAWS yesterday afternoon.

MAP LAYERS: The areas outside of the white line around the perimeter of the fire show roughly 24 hours of fire spread: 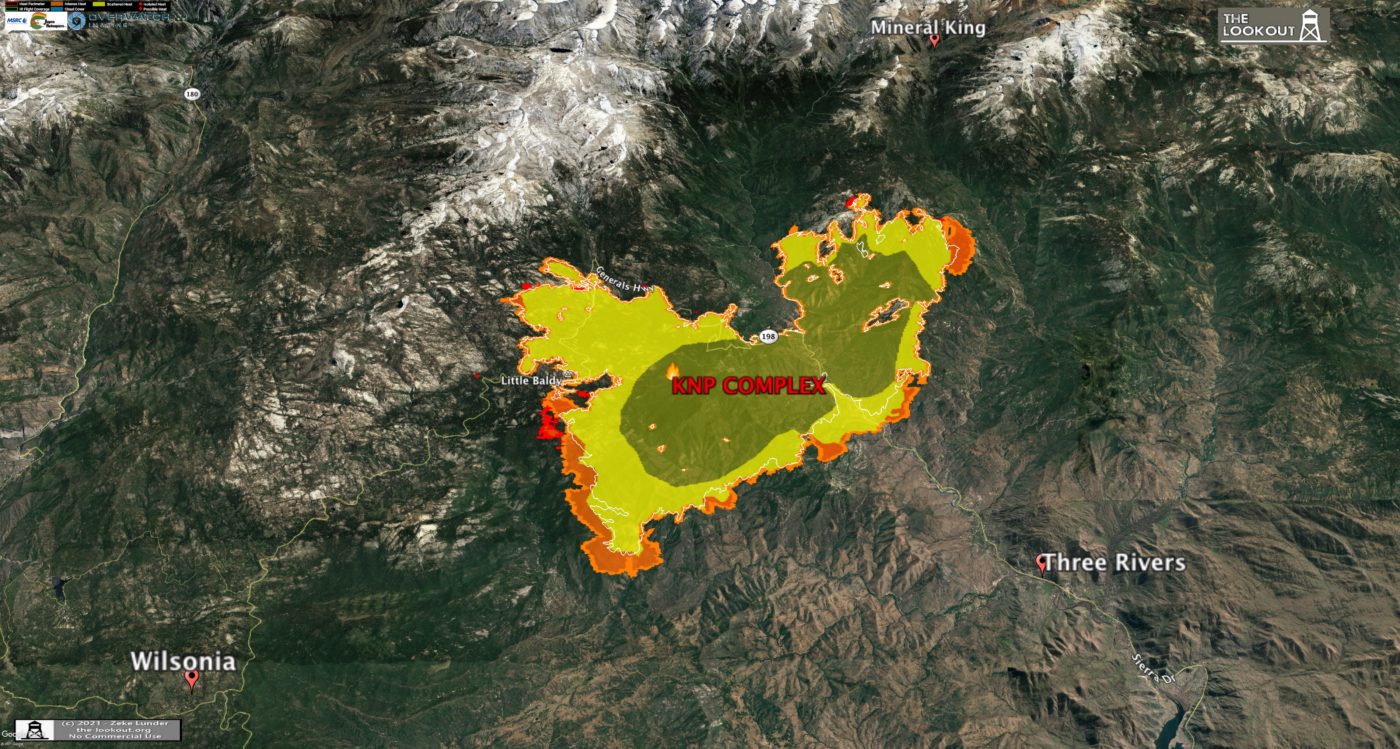