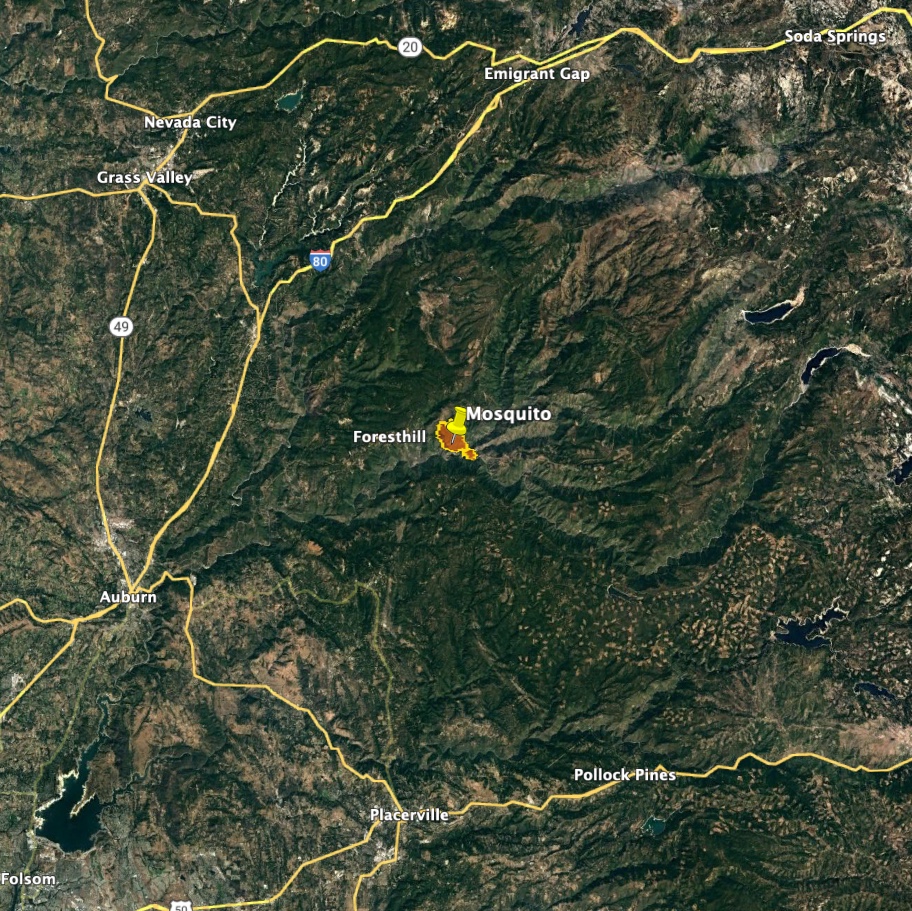 The Mosquito Fire started last night in the Middle Fork American River Canyon, at Oxbow Reservoir. It is growing rapidly today and will become a major fire. Under current conditions, firefighting will not control the head of the fire, and the best firefighters can do is focus on sections of the fire that are burning less intensely. We will have a livestream on our YouTube channel at 7pm.

The area in ORANGE was the Mosquito Fire perimeter at 10:30am this morning. The area in RED shows the past six hours of growth. 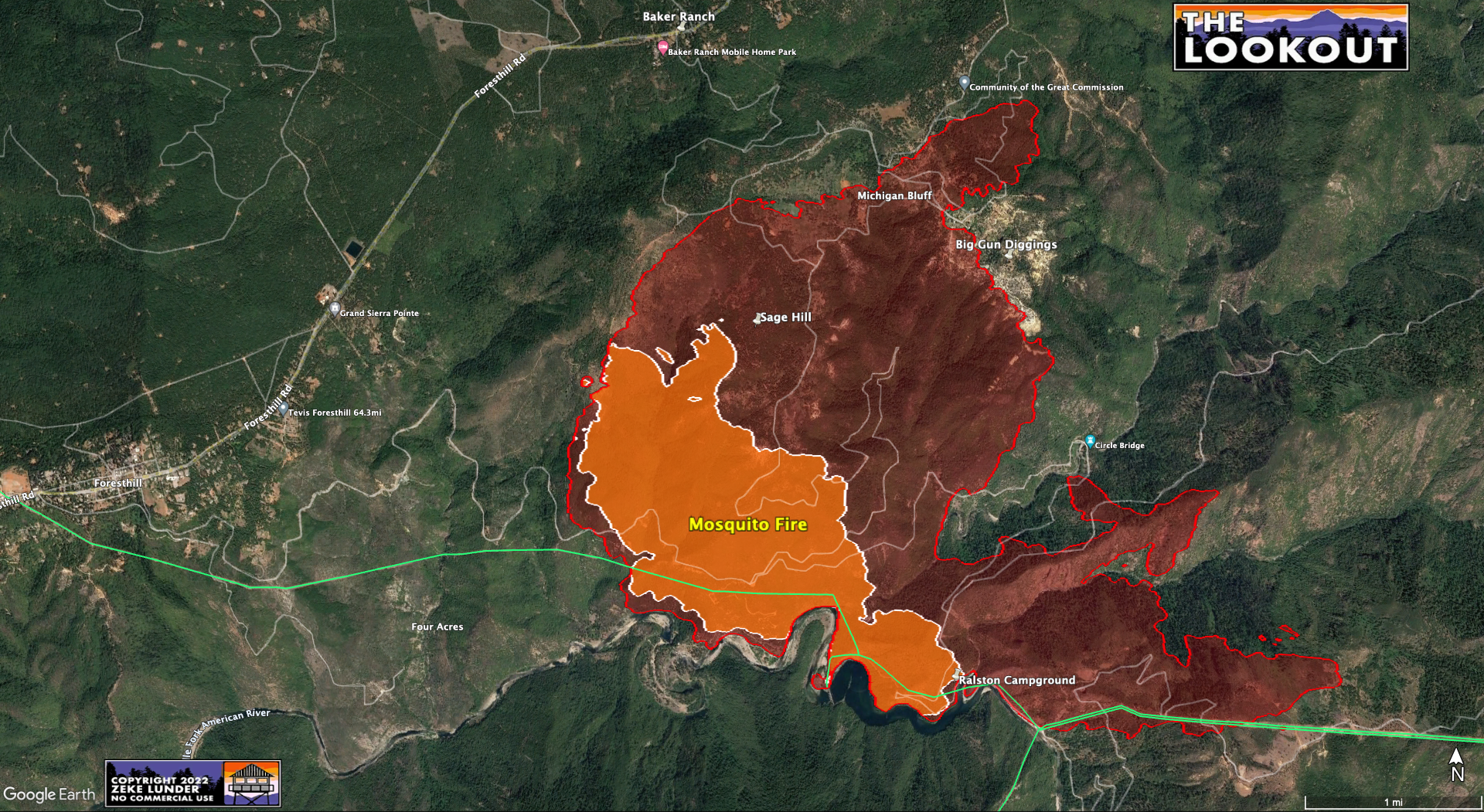 The fire moved a staggering TWO miles this afternoon and made its way into the Michigan Bluff area. 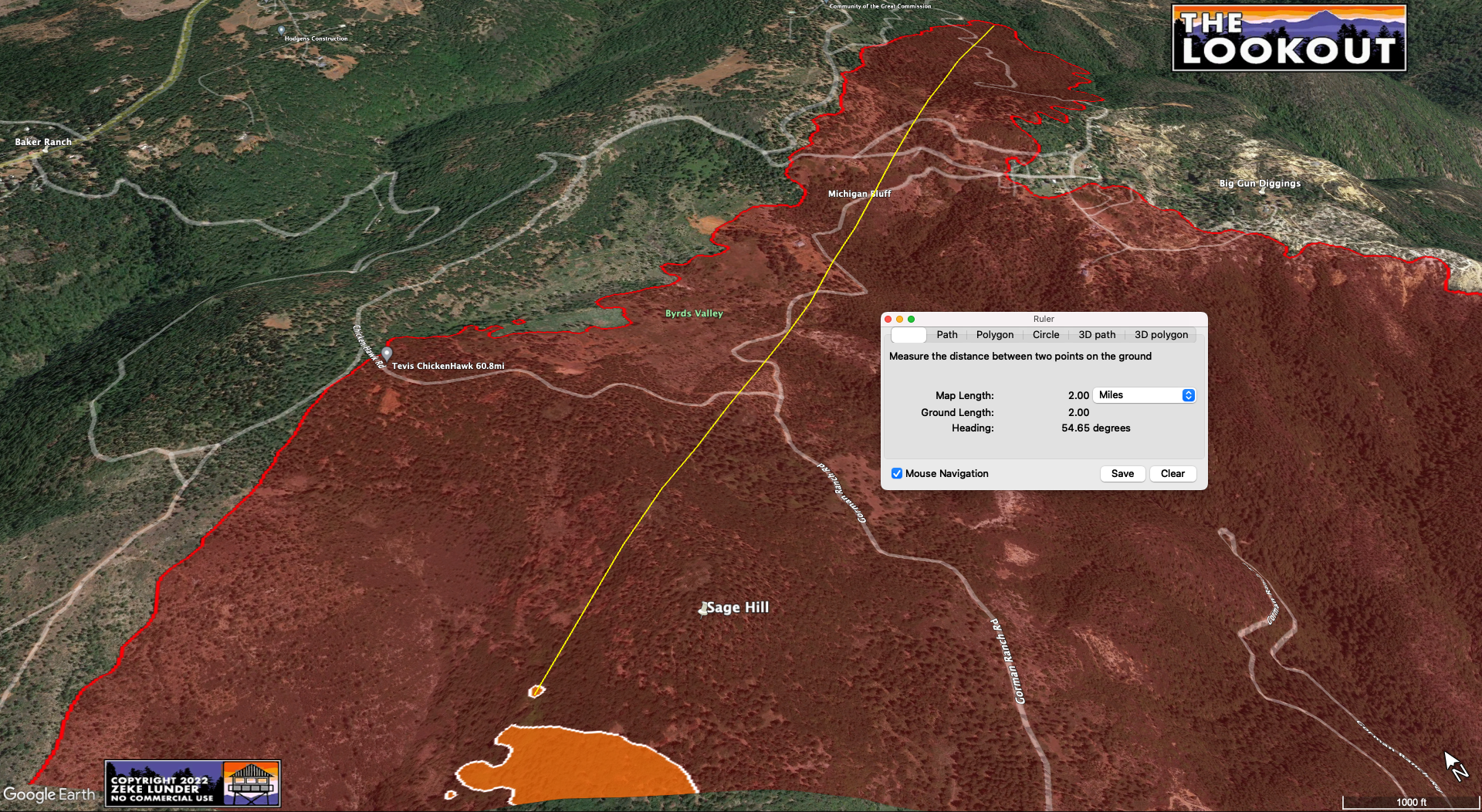 The fire has burned onto the ridge between Middle Fork American River and Rubicon River. Sounds like they are de-energizing the 230kv line from powerhouses in the area, which will take 200+ megawatts offline. This power transmission line connects to Folsom. 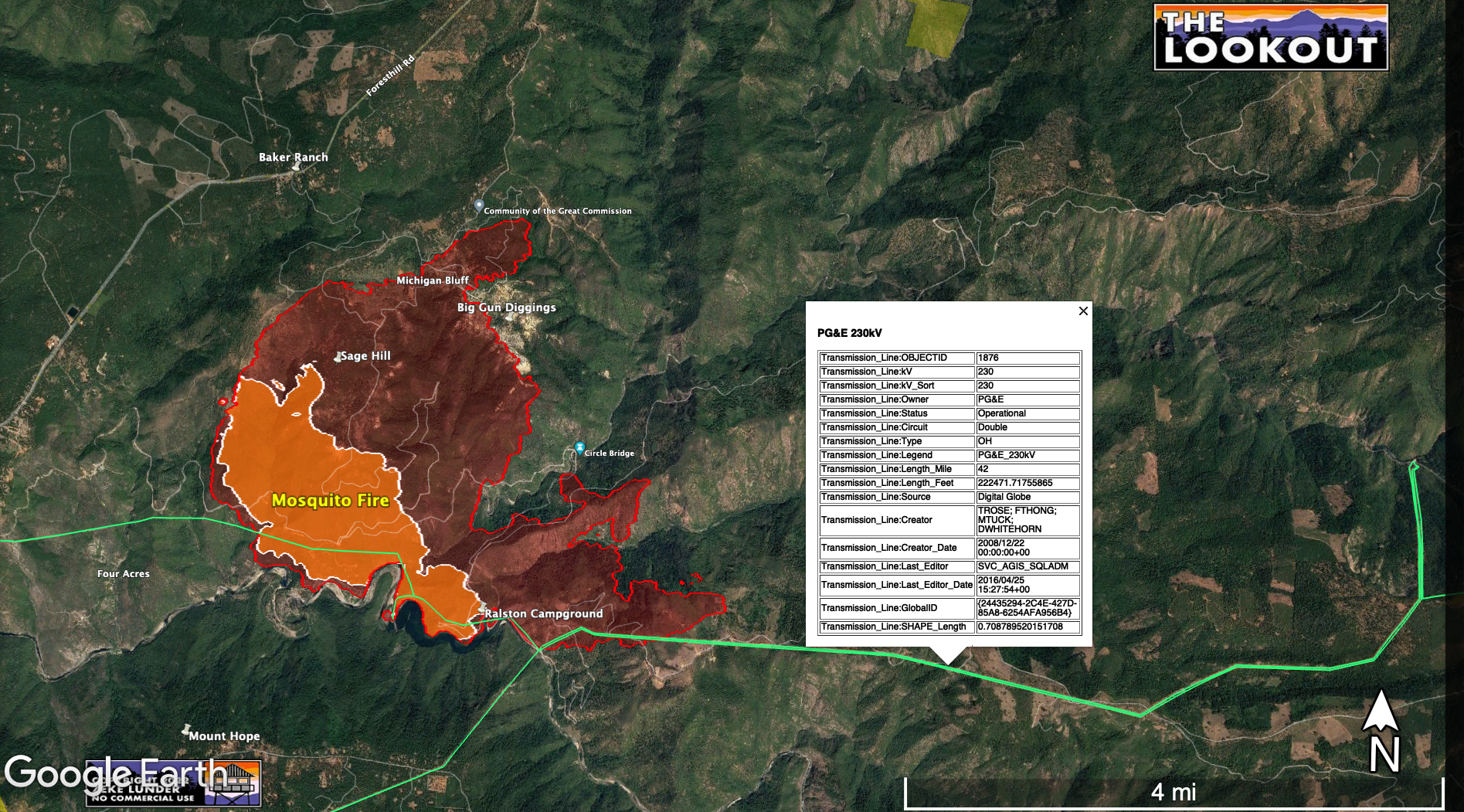 View of fire at 2pm from Bald Mountain webcam: 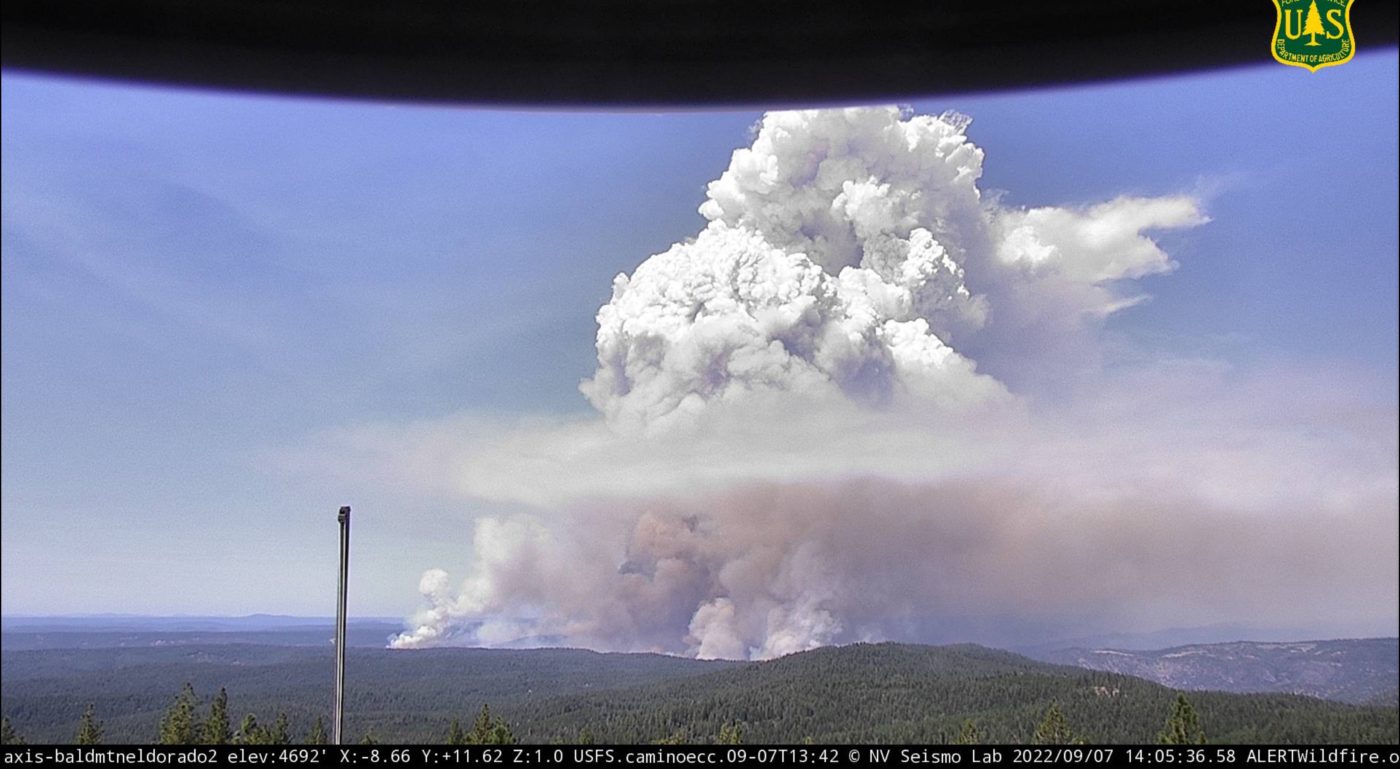 Structures near the Mosquito Fire shown in red. At 2pm, the fire was burning toward the north-northeast (up in the map below). 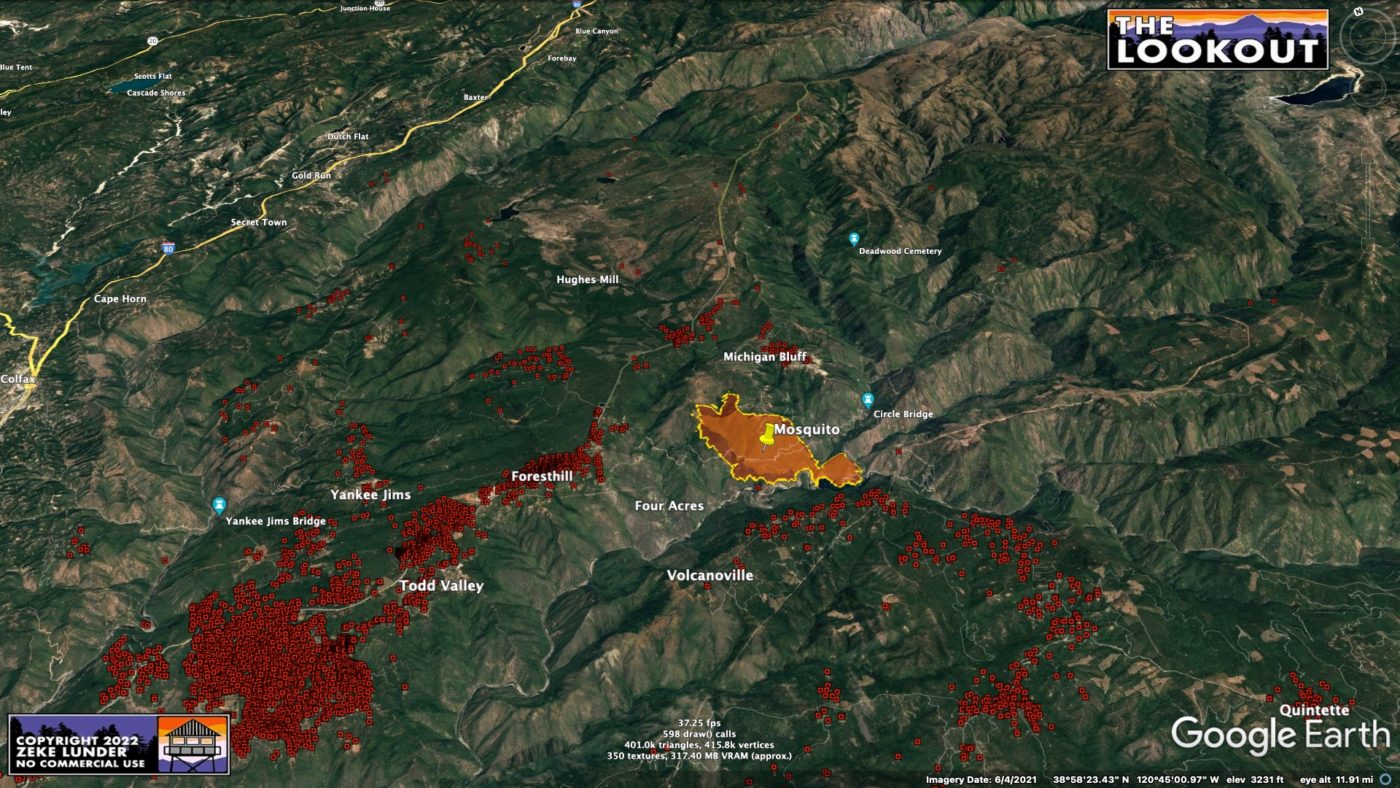 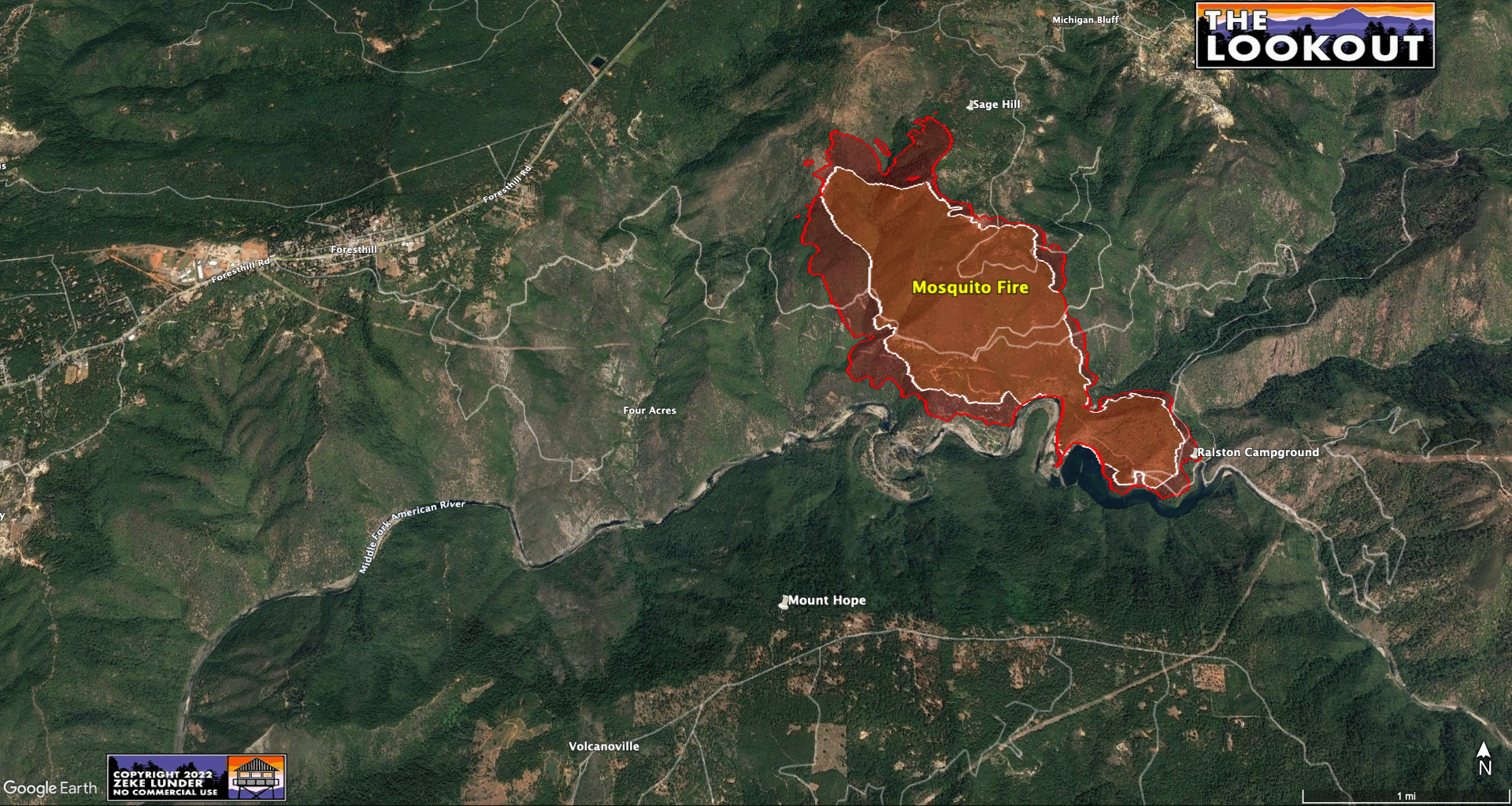 Longest run over the past six hours was on the north end of the fire in the direction of Michigan Bluff. Fire ran about a half mile up Sage Hill, with short range spotting observed out ahead of the fire: 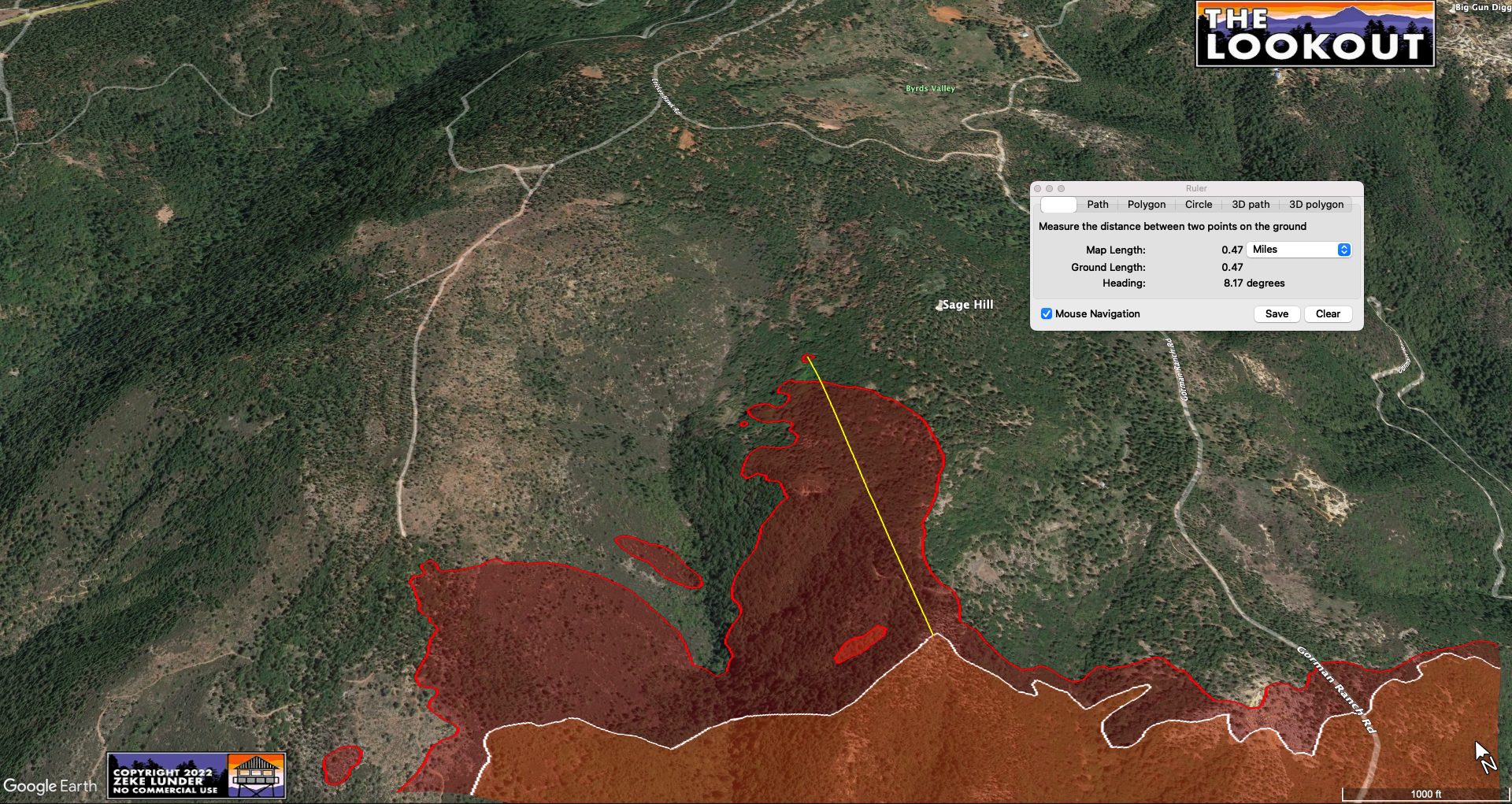 As of 10:30am the Mosquito Fire was a little over two miles from the Foresthill Elementary School: 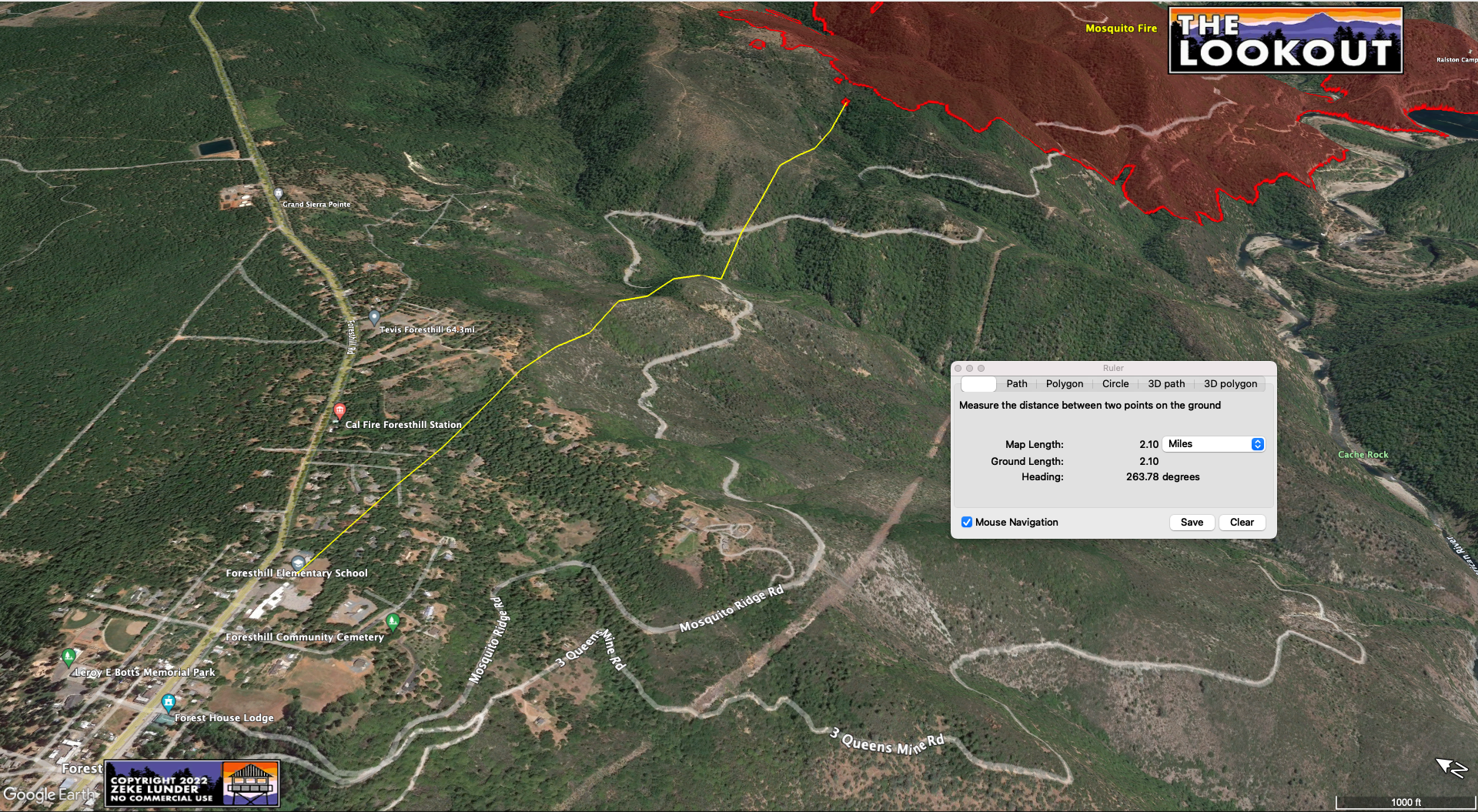 The Mosquito Fire burned actively overnight in area with no recent fire history. It is close to populated areas, in a canyon that can experience whipsaw wind changes every 12 hours. Not a lot of recent fire history — fires labeled in YELLOW are within past 10 years. 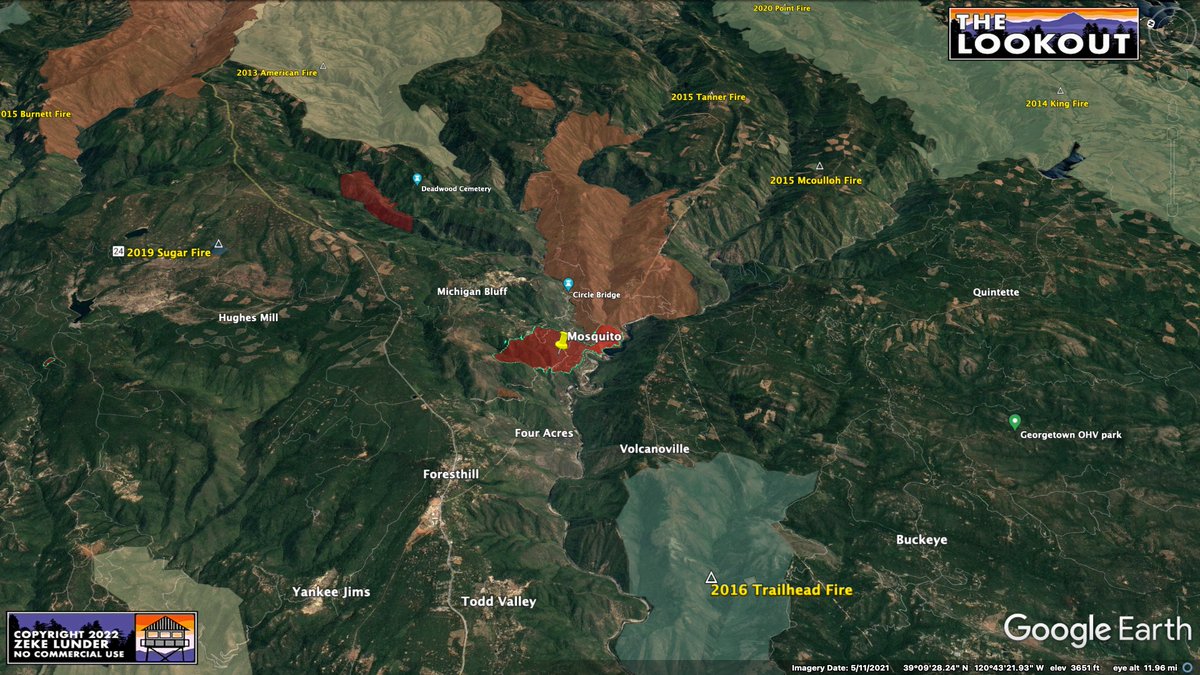 The 2007 Ralston Fire is shown in PINK. You’ll notice there aren’t many medium-sized fires on this map. Fires which escape initial attack and become well-established in these canyons typically burn for a very long time. 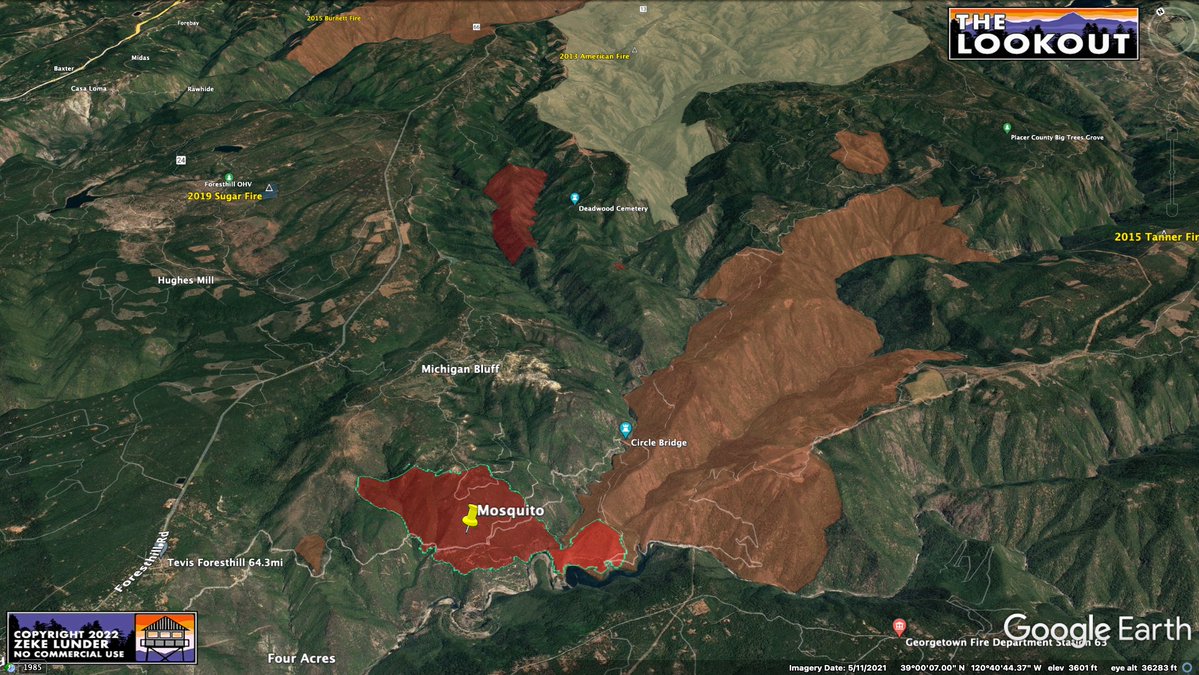 The Mosquito Fire is burning under a 60Kv power line that delivers hydropower electricity from two powerhouses (Hellhole Reservoir) to the Auburn area. If it crosses the river to the south, it will threaten a 230Kv line that delivers the same power to Sacramento. Power lines in green. 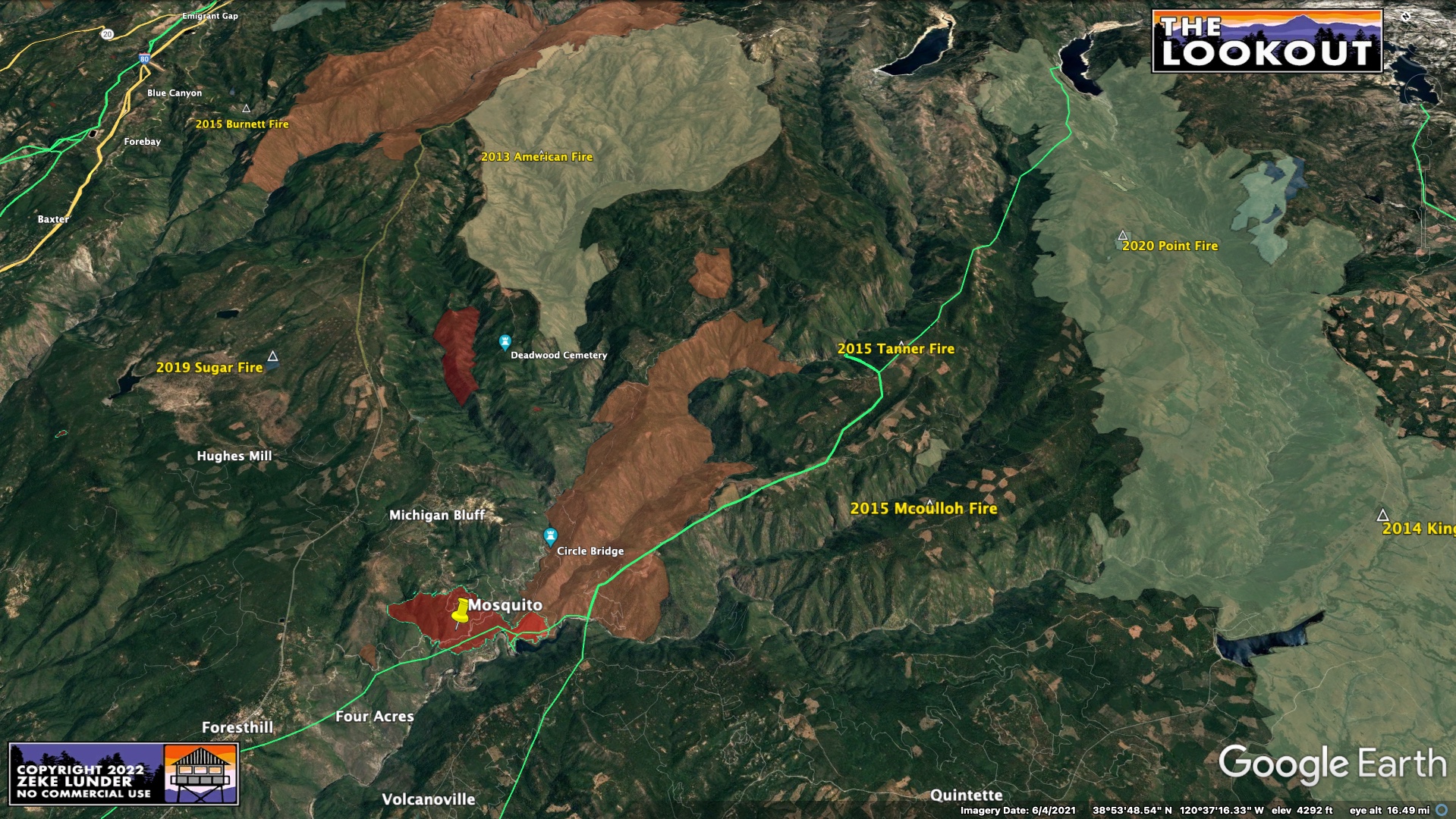 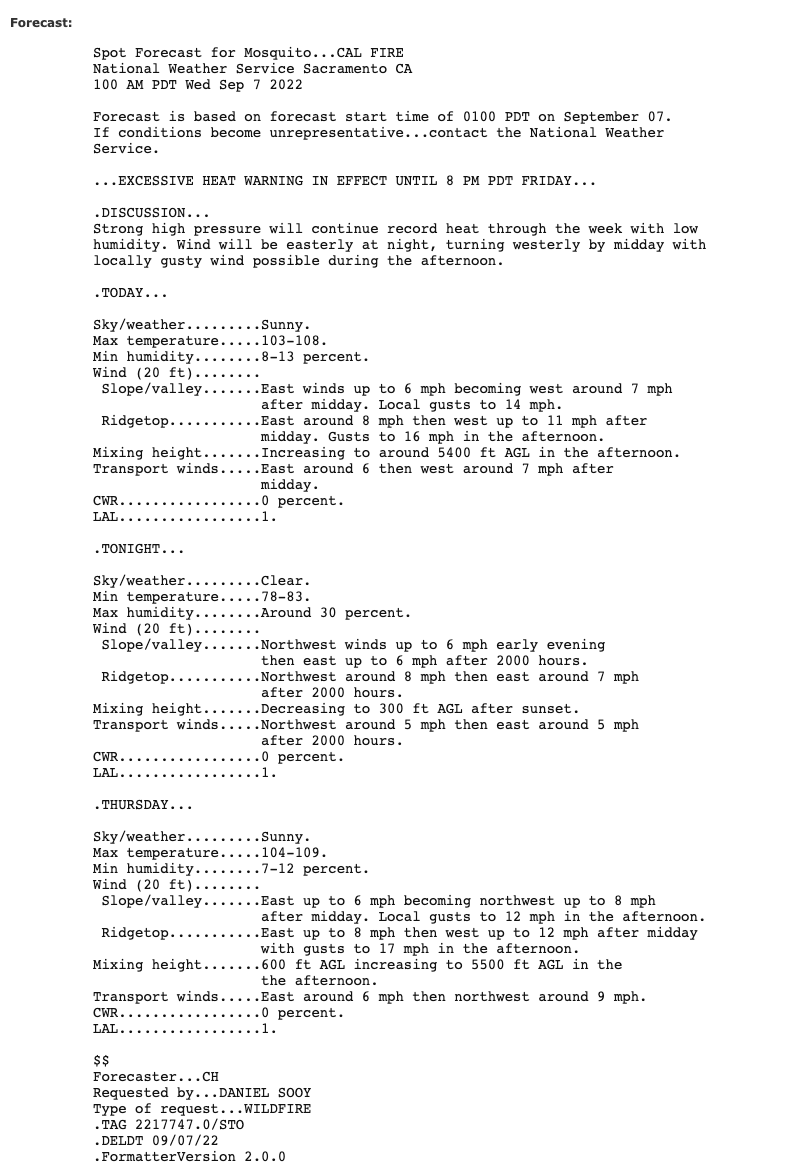