The Dixie Fire continues to exceed everyone’s expectations. Yesterday the fire front moved between 2.5 and 3.5 miles toward Highway 36 and Chester on flat ground. This is pretty unusual for what I have seen in Northern California. Usually, our big fire runs are driven at least partially by slope, as it is easier for wind to get down to the surface and blow directly onto the surface fire. Closed canopy areas usually cause a major reduction in surface winds, which helps slow fire spread.

The fire also ran hard about 1.75 miles and hit the Lake just east of Lake Almanor West. As with many things about fire, this was just luck. If the fire had spotted over the line a half mile farther west, the new run would have scored a direct hit on LAW, and the map below would be even sadder than it already is.

I saw a question this morning about why we aren’t using more air tankers to get this thing under control. In general, air support is pretty ineffective against fires that are being driven by long-range spotting. For example, check out this image captured yesterday afternoon of the fire south of Highway 36. 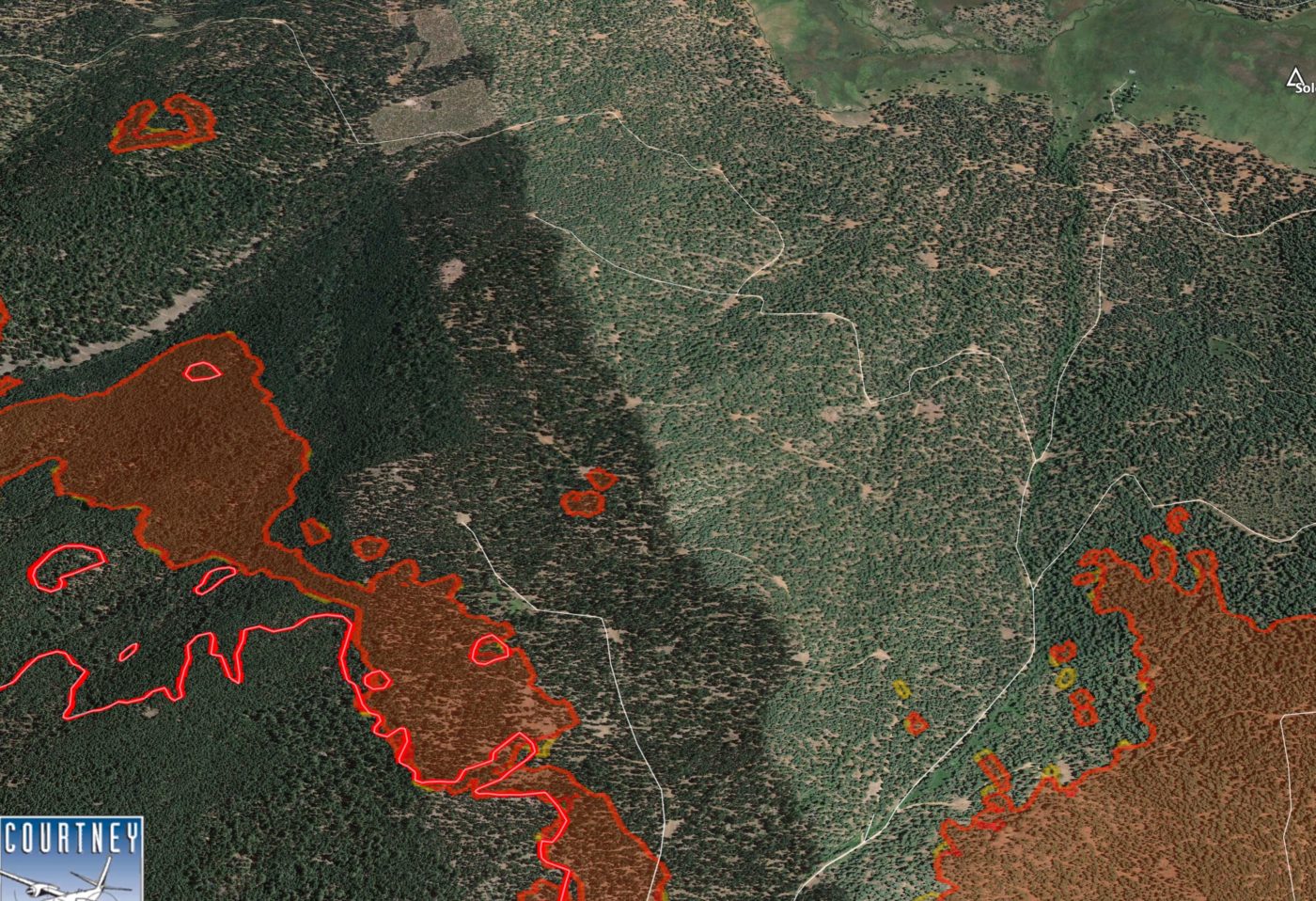 If aircraft could get under the smoke and hit these spot hard maybe we could take some of the heat out of them. However, aircraft don’t extinguish fires, they just slow them down so we can get ground crews or dozers in there to dig a line around them and really put them out. As long as the weather stays hot, dry, and sunny, it is almost impossible to stop this sort of fire spread. All of our best firefighting tools, including bulldozers, air tankers, and heavy helicopters are ineffective against massive spotting, and the towering smoke columns make it harder for aerial observers to steer crews into the spots, or to support them with aircraft.

Even if this fire was 100 acres, we’d have a hard time corralling it under these conditions, but when you look at the sheer scale of the Dixie Fire you can see the impossibility of controlling it. Just in the past 2 days, we’ve grown about 25 miles of new uncontrolled perimeter in the areas around Highway 36 and Highway 89 between Lake Almanor West and Highway 32, and least a 3rd of that could be considered the head of the fire depending on which way wind is blowing. We may have some success on the flanks here or there but this fire is beyond control until the weather cooperates and we get socked in with smoke again. And then it will likely get up and run again when the lid comes off. I think it is really important we are honest about this with the public. This won’t be over until the fire runs out of fuel or it rains.

The images below are from IR flights captured about 1:30 am, on 8/4/21. White lines on these maps show 24 hours of fire spread. 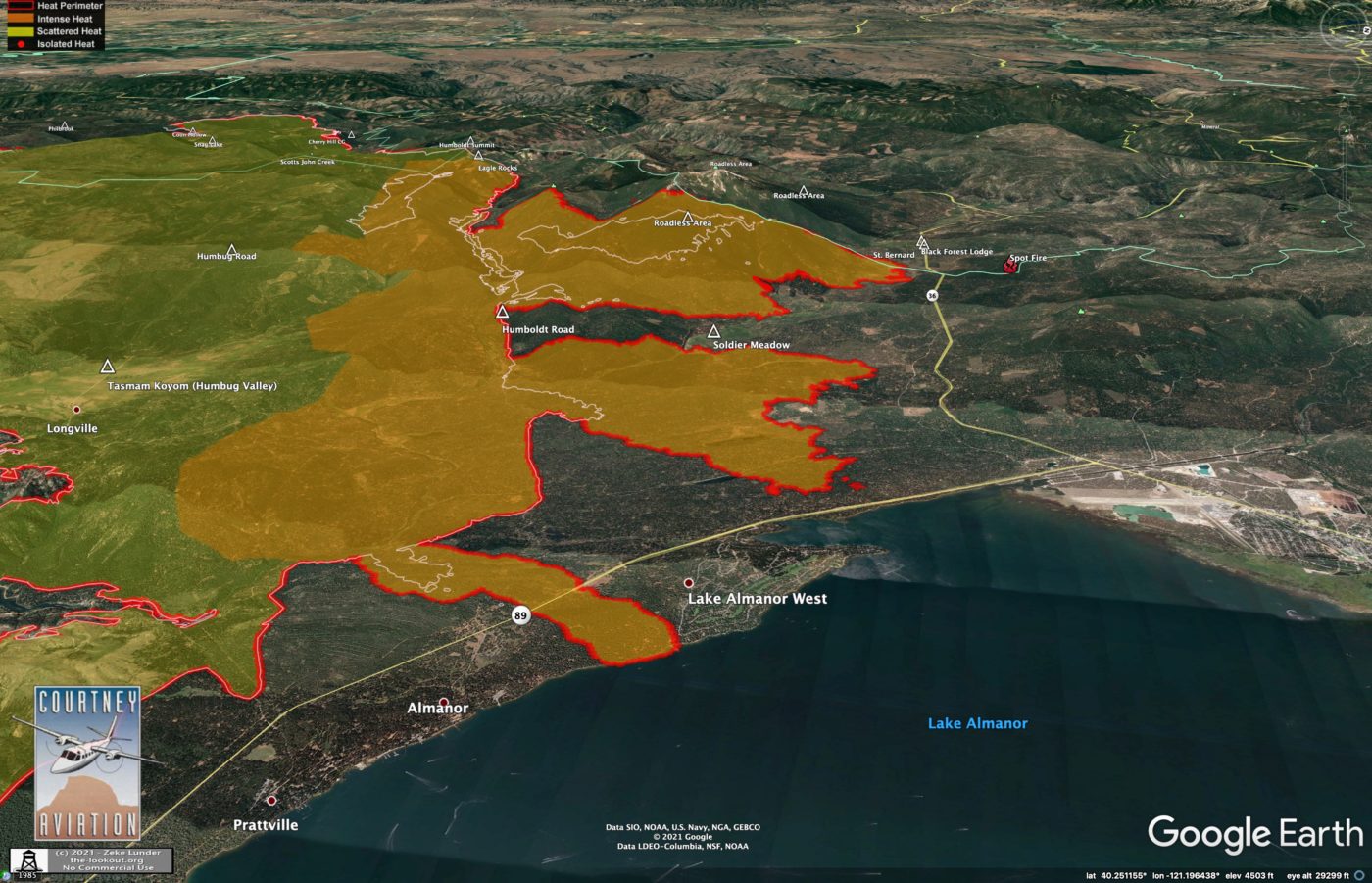 Some good news on the West Shore – firelines to the south of Prattville have been holding for almost 10 days. If we can get through the next few days of winds, the SE edge of the Lake might be spared.

There is a wide variety of forest structure in the flats where the fire is spreading, ranging from well-space fir forests which were heavily thinned 10-15 years ago to overgrown thickets that haven’t been thinned, ever. I did some fire hazard surveys in this area last year, and took these photos.

The Greenville Area is looking hopeful so far, though everything on the fire will be tested by high winds today and tomorrow. Firefighters have been able to hold the fire at the train tracks near town. However, the fire has been burning in Wolf Creek Watershed, to the west, with extreme intensity, and is established on the north side of Highway 89. This new flank will likely run to the top of Keddie Ridge today, hitting the Ridge east of Homer Lake and West of the Greenville Saddle. Once this happens, the east flank of this run will be a threat to Greenville and Indian Valley again as winds shift to the West on Thursday. There may be opportunities to tie this flank of the fire into the Greenville Saddle (far upper right of image) and hold it there, but this area is thick with 40 year old trees from the Will Fire, and east of there, control options on Keddie Ridge north of Greenville are few and far between. 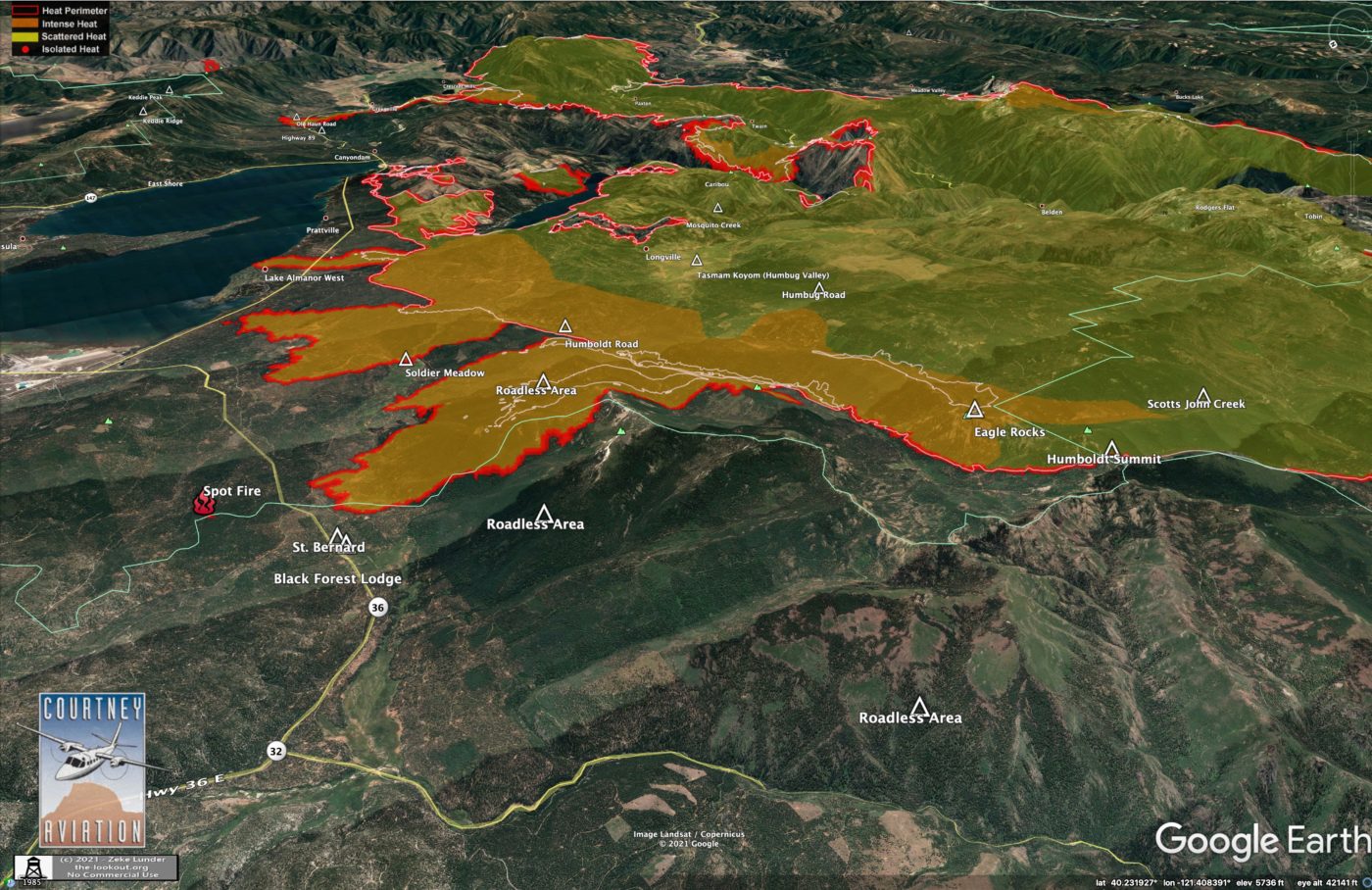 View over Highway 32/36 intersection. The fire has run uphill from Humboldt Road and over the NE flank of Butt Mountain. It is flanking now thru true fir forests that haven’t been roaded, logged, or burned, ever. I am hopeful but not holding my breath that some of this flanking spread will spare some of the giant old red fir and sugar pine in this area. The PCT drops from the rim of this area (green County line) down toward the spot fire NE of St. Bernard. The spot fire is a mile past Highway 36. It may get lined before things take off later today, but may not have been detected until this imagery hit the mapping shop around 5 am.

Here are some photos of forest conditions in roadless areas in the center of the map above, just east of the Carter Creek Watershed, about 3/4 of the way up the slope.