There is a lot of activity on the East Zone of the fire tonight. The fire blew up this afternoon after the last IR flight of the day, so sitting in front of my computer far from the fire, I don’t have any solid intel on where exactly it is. The map below shows where the fire was at 4:30 pm, 8/9/2021. 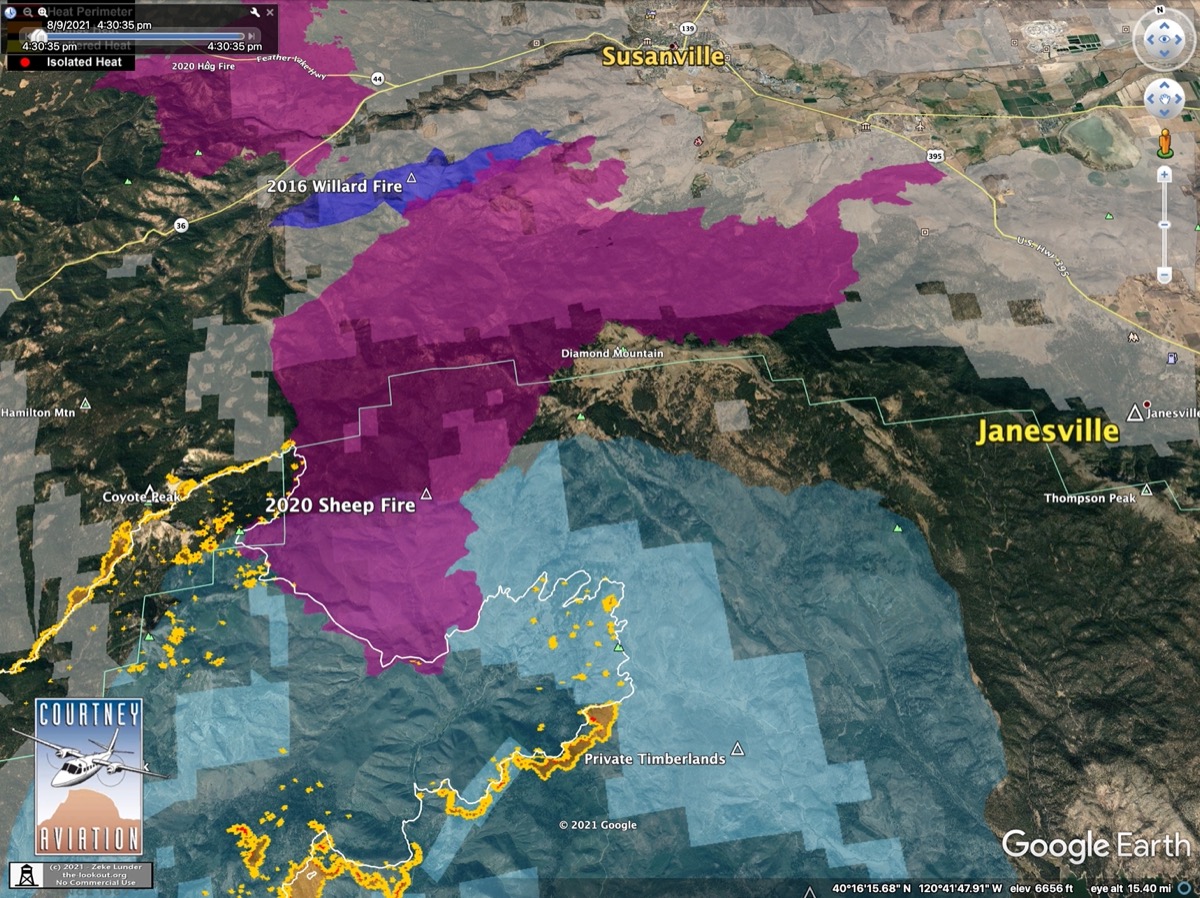 Purple is the 2020 Sheep Fire. The white lines on this map are 16 hours of fire spread before where the yellow and orange heat is. Basically what this map shows is the Dixie Fire hasn’t really moved north toward Susanville since it ran into the Sheep Fire. There may still be some potential for this to happen, but it didn’t today. Blue is the 2007 Moonlight Fire, and light blue are private timberlands that were salvage logged, had slash cleanup, and were replanted with trees. While the fire is able to spread in these areas, it hasn’t moved very fast in past day in these areas at time of this imagery. The darker blue areas are public land, and tend to have a lot more fuel on them. 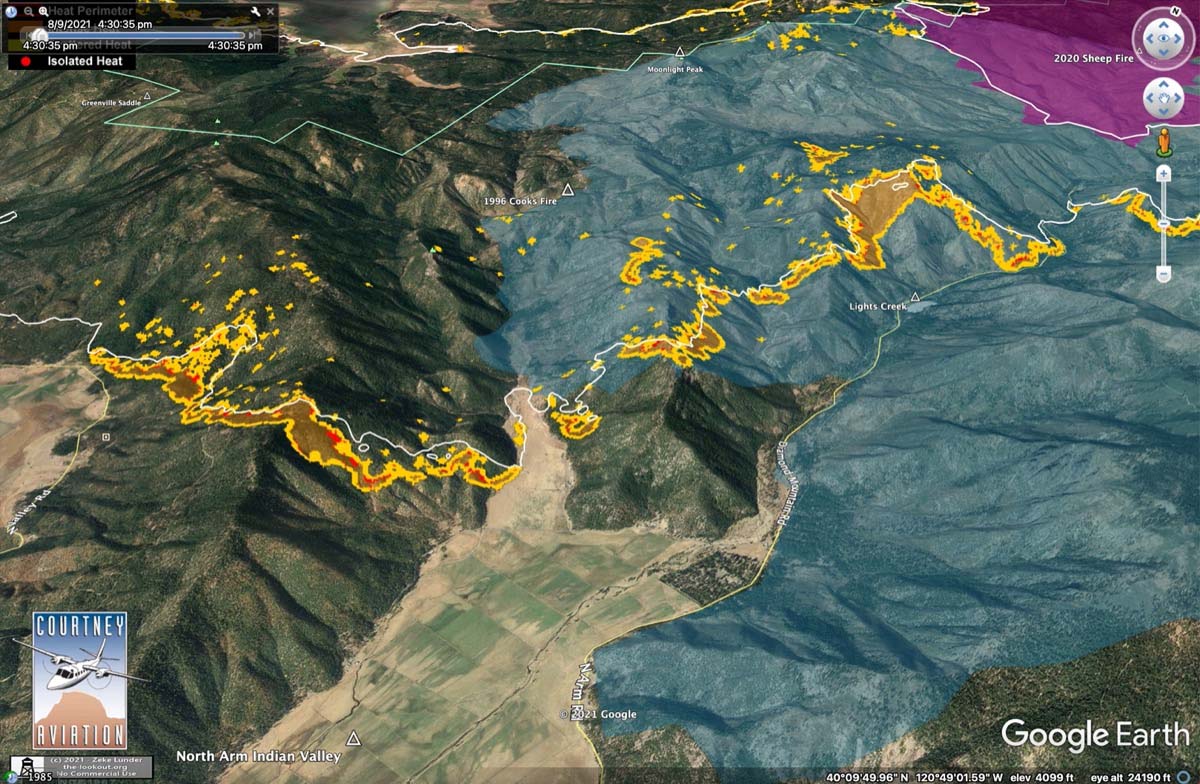 Here is the SE flank of the East Zone, in North Arm Indian Valley. Fire continues to flank on Keddie Ridge at Taylorsville Dump Road and into Cooks Creek. The big patch of heat up on the right of this image is directly across from the old Engel Mine. The fire blew out big time around sunset in area around where Moonlight Pass Road hits Diamond Mtn Road. I don’t have clear intel on this except from a big-picture weather satellite and a second-hand report of radio traffic, but my guess would be the fire got to bottom of slope and ran up the other side of Lights Creek, up and out the right side of this image. Will update this if I get better info. 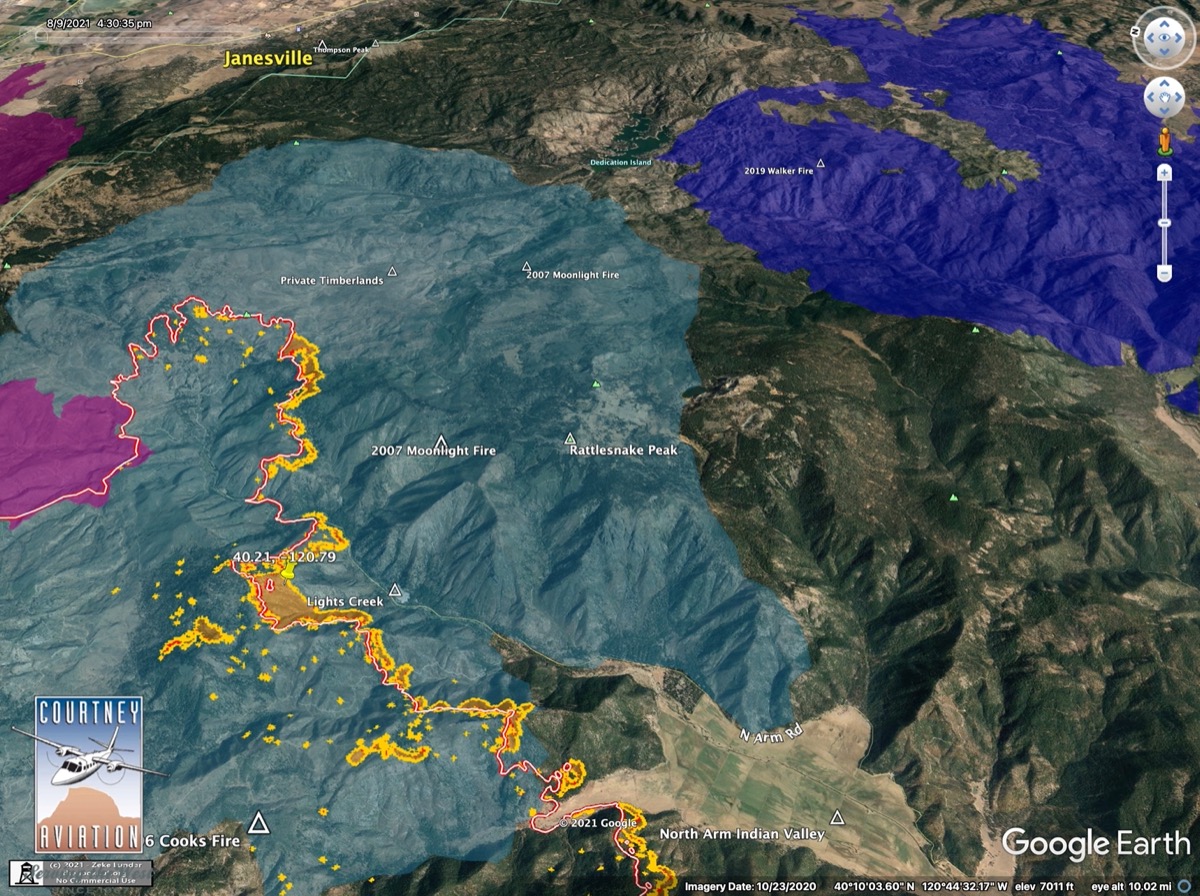 Fire ran from orange area in lower-center of this image toward Rattlesnake Peak, in center around sunset today.

Here are panoramas I shot in 2007 Moonlight Fire 3 years after the fire. Private lands had been salvage logged and replanted, public lands had hazard trees dropped, and less intervention. Many of the planted trees are getting killed now. Interactive versions of these are here: 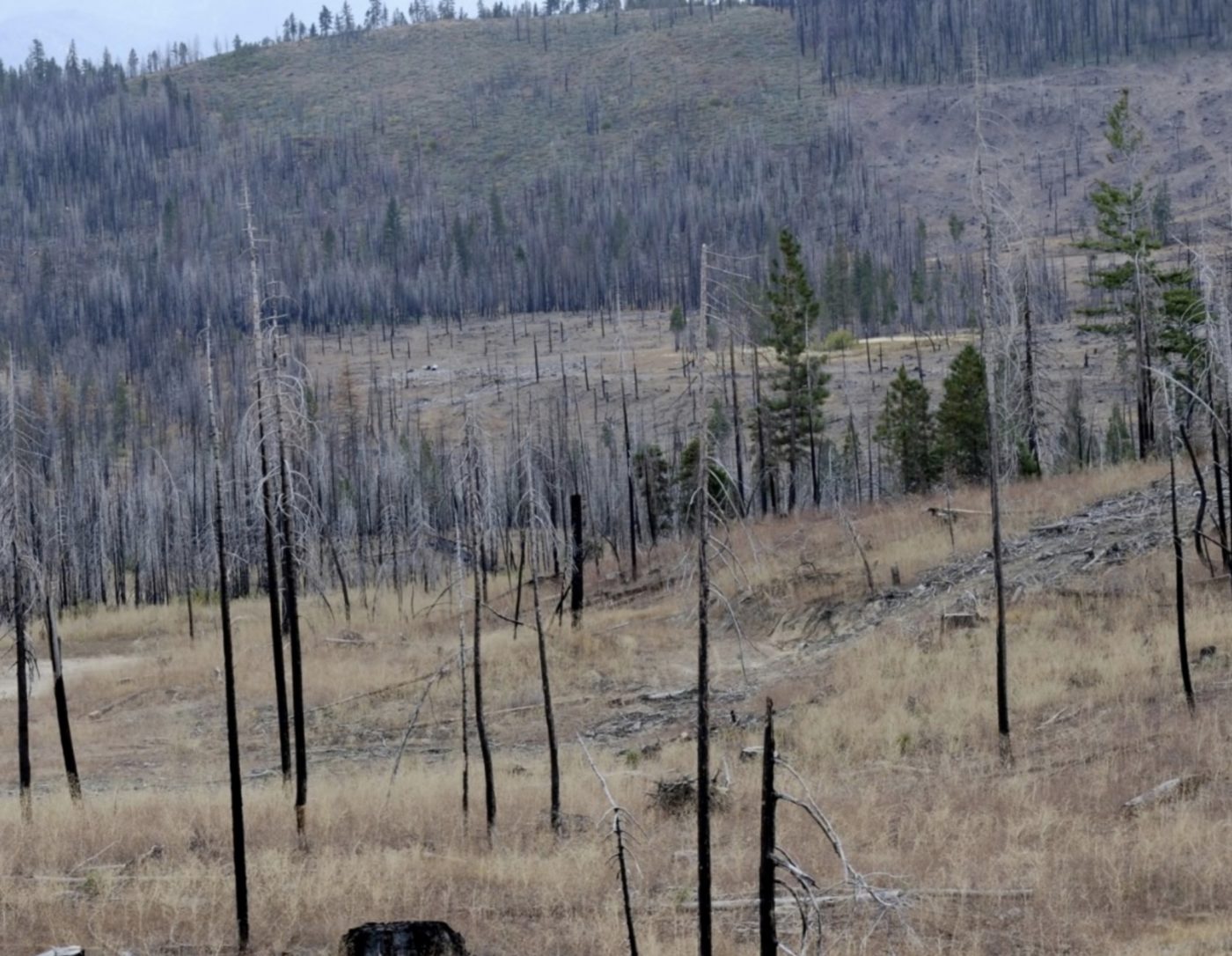 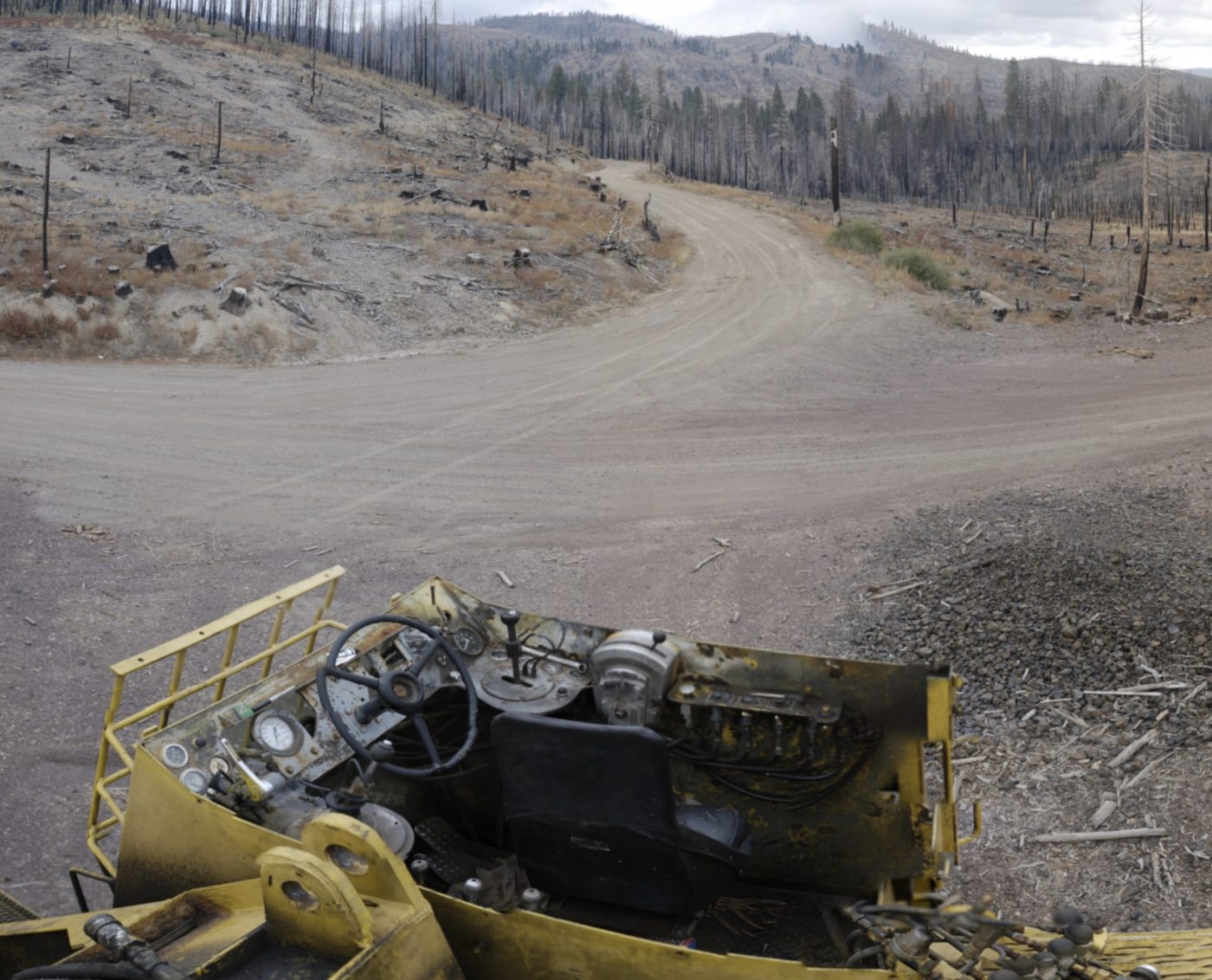 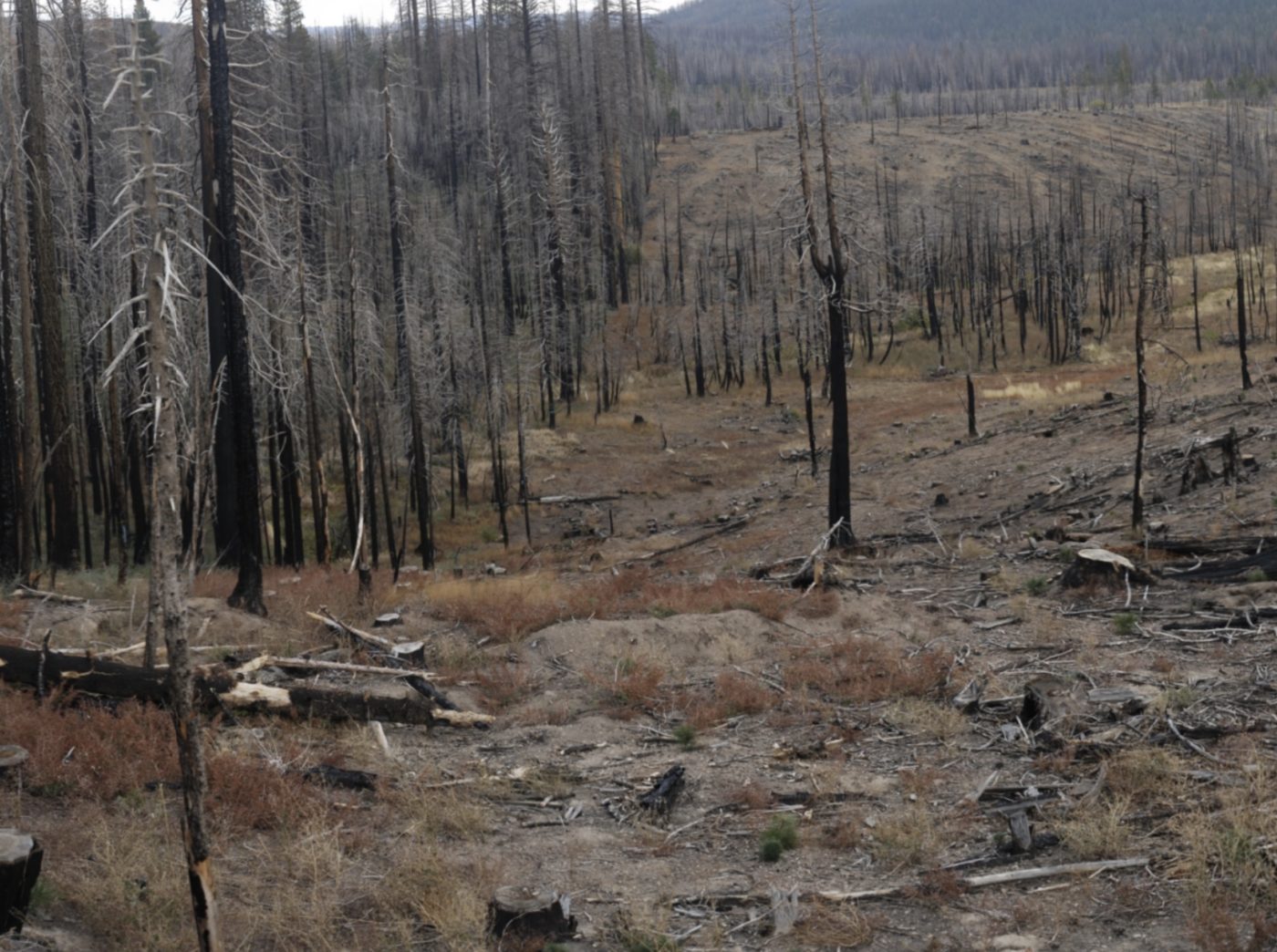 Moving over to Westwood and Keddie Ridge. This view looks south over Westwood and Walker Lake (Mountain Meadows Reservoir). 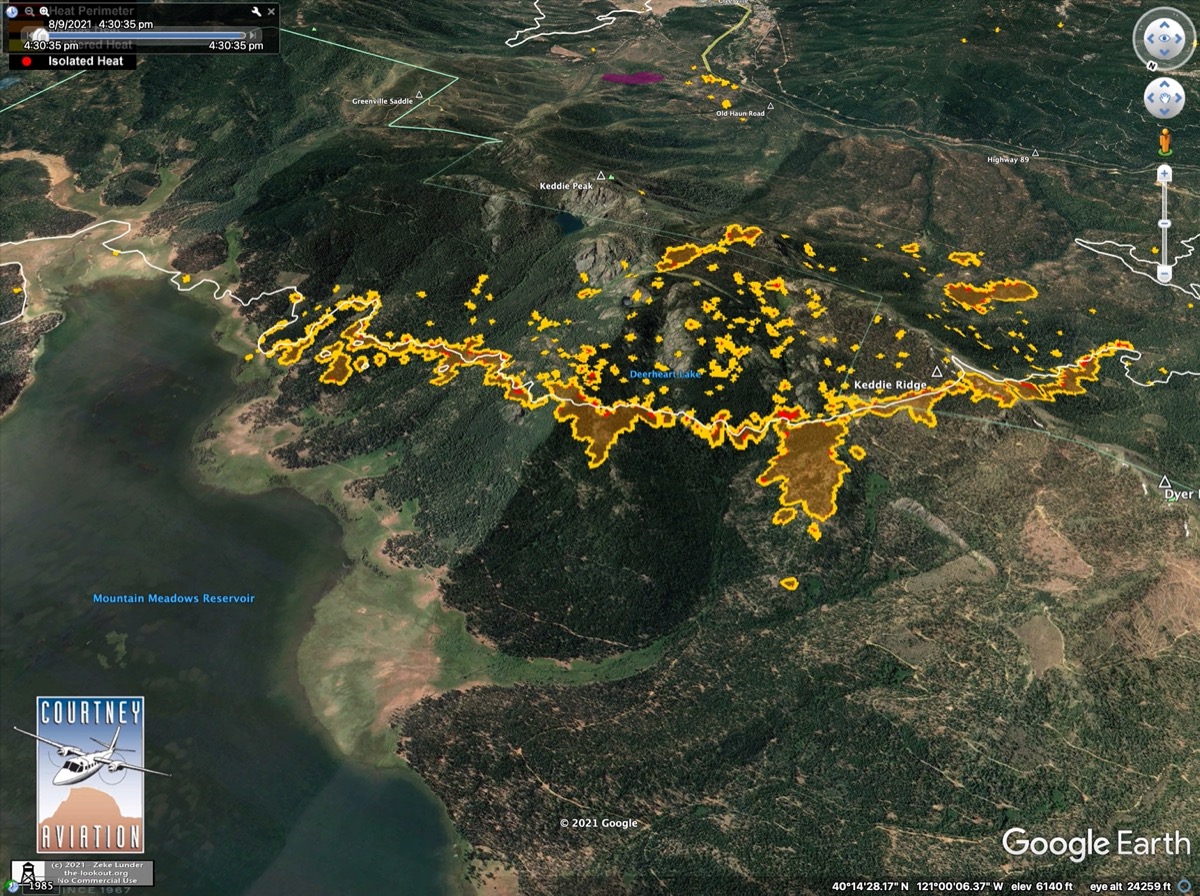 Looking south at Keddie Ridge. The white line shows 16 hours of fire growth, The fire is backing downhill after its run yesterday afternoon. It generally moved less than 1/4 mile downhill. The spot in Deerheart Creek will likely run uphill toward ‘Long Rock’. Right of center in this image. 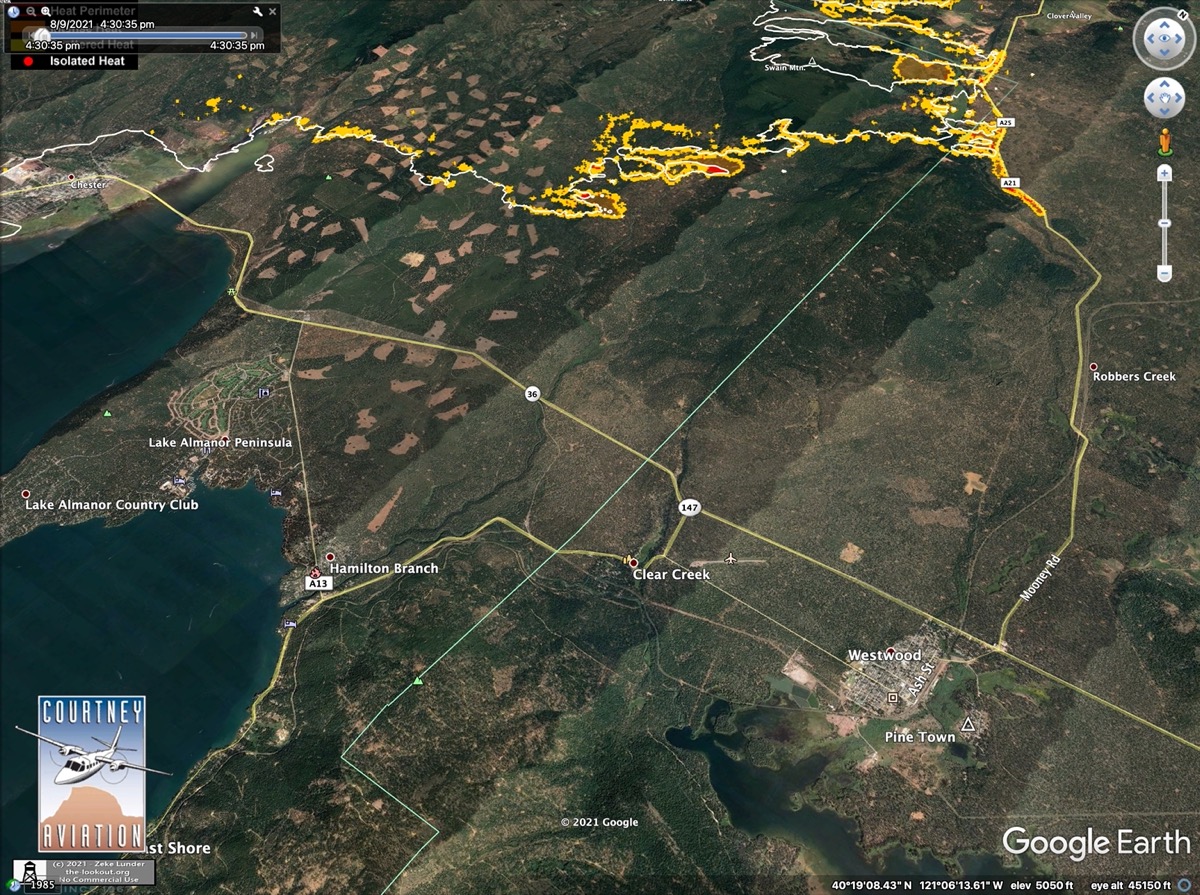 Not a lot of fire spread toward Westwood or Clear Creek from fire to the NW today. The fire continued to move NE. 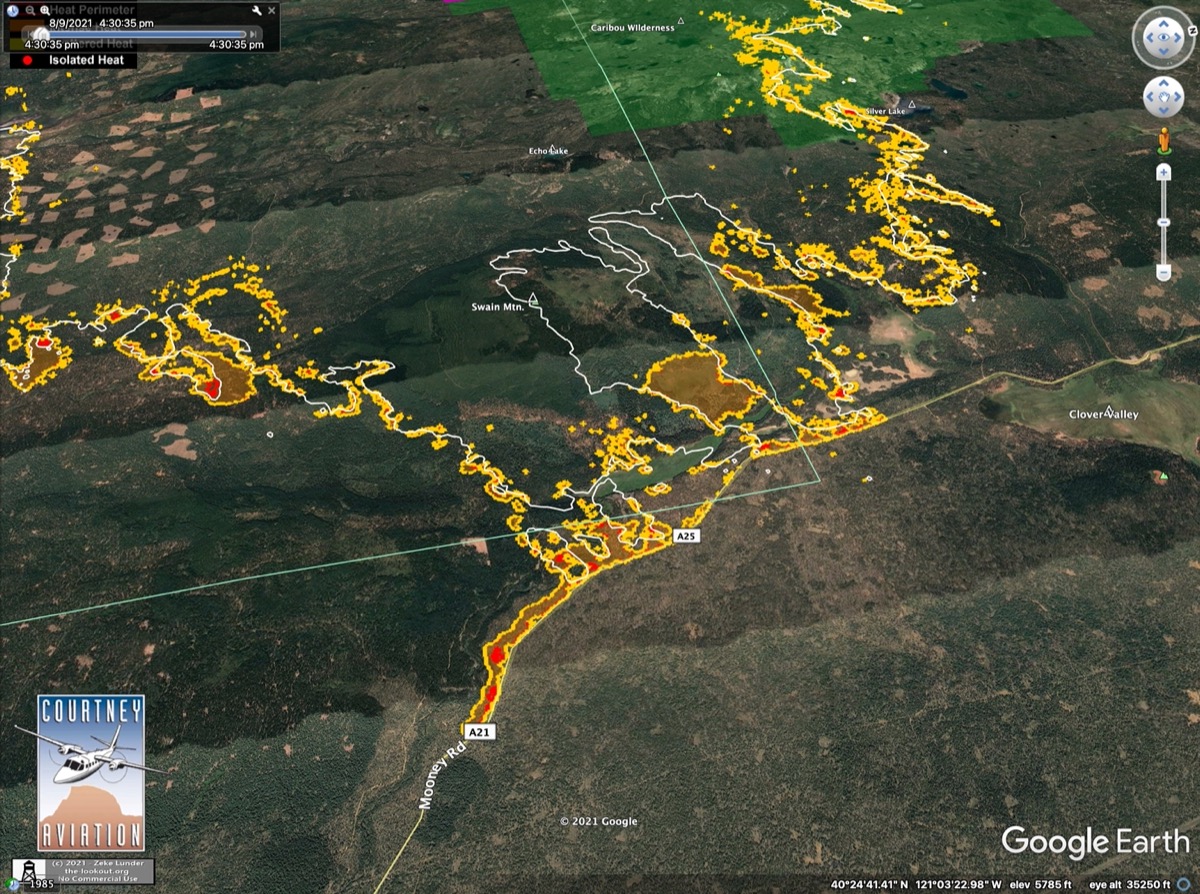 North of Westwood, there was firing today along A-21 at the Swain Mountain Snowmobile Park. This was holding as of 4:30 pm, and most of the spots from last night had been picked up. Looks like the strategy may be to tie this firing into roads and dozer lines headed west. 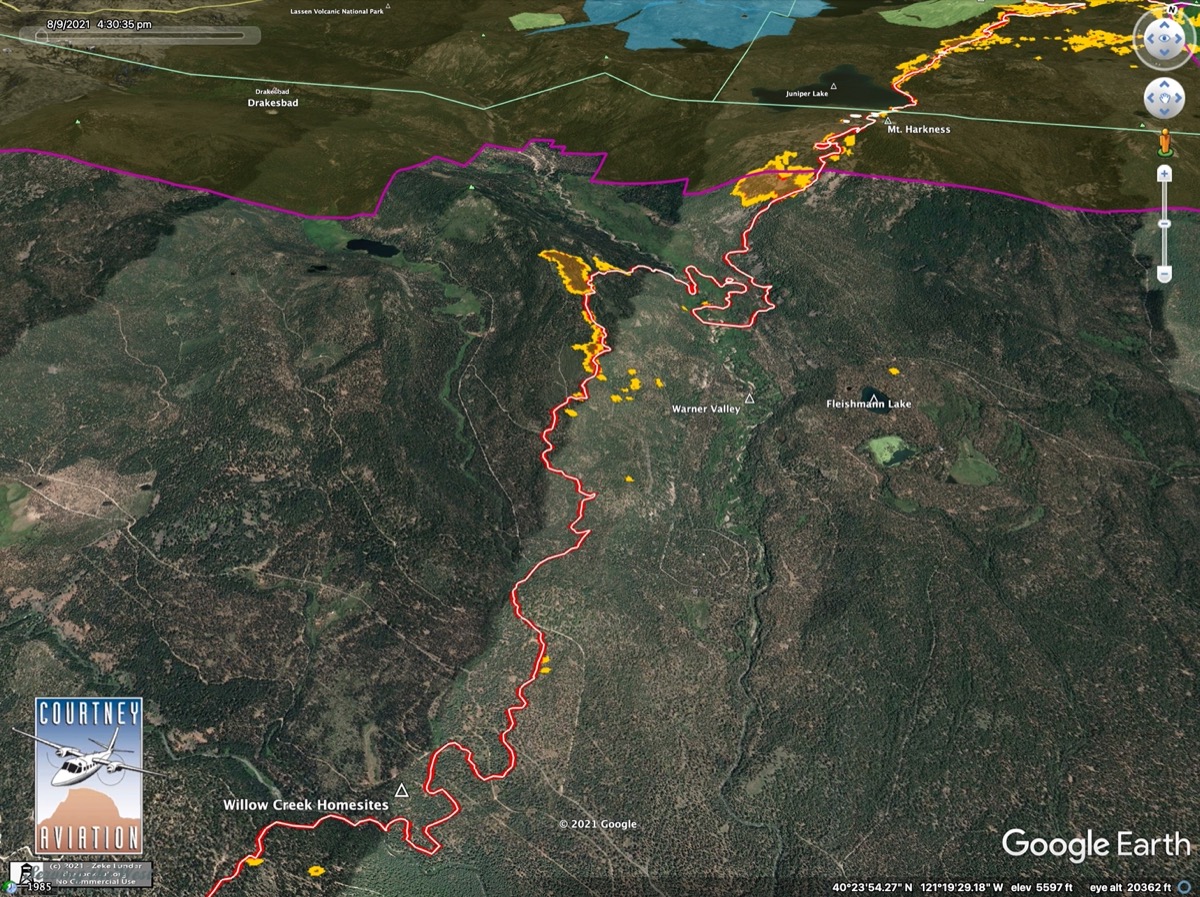 Not a lot of movement on the NW flank of the fire. No new spread up Warner Valley, a bit of a run up Kelly Mountain to the west, and backing down NW side of Mt. Harkness. 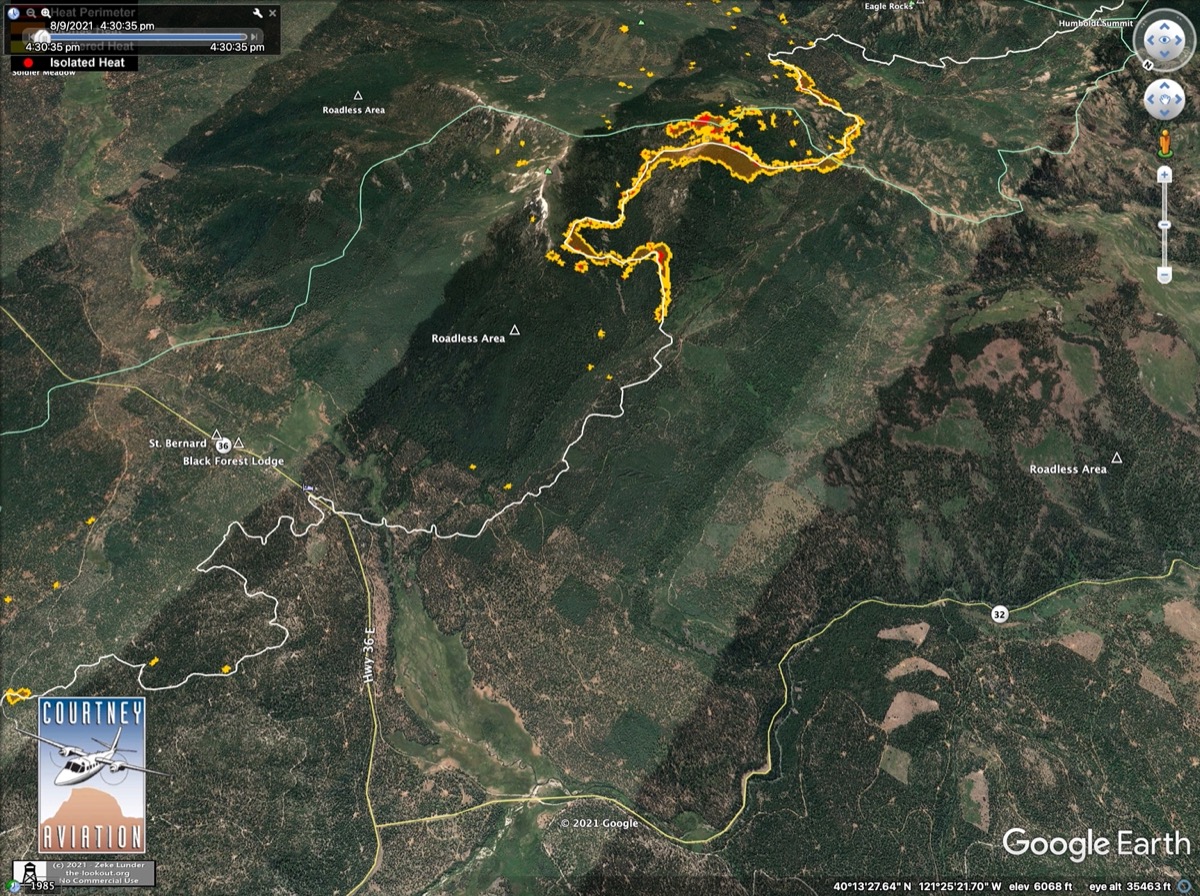 Fire continues to back slowly in the Carter Creek drainage, on Butt Mountain, east of Highway 36/32 junction.

That’s all for tonight.

If these posts are helping you out, consider donating to The Lookout. We are still working out what the website will be, but donations will help me hire some help to create content and stories to help us more forward through this disaster.