Just another crazy day/night on the Dixie Fire. Last night’s post is bleeding into today’s – what an night!

As of 2am, Westwood, Clear Creek, Hamilton Branch, and the Peninsula were still standing. But today is Friday the 13th, it’s another critical fire weather day, and our communities are literally surrounded by fire.

There has been no IR mapping conducted since 2 pm, yesterday, so I do not have the hyper-detailed maps we’re all used to, now, so we’ll all have to be in the dark together. If it is any consolation, most of the firefighters don’t know where the fire is right now, either. As is common when things are blowing up, firefighters will go into the field today with maps that are over 24 hours old. This isn’t unusual. This fire has had an exceptional amount of intel getting flown, but often, we can go several days without a crisp and tight IR map.

Since I wrote this last night, we got an orbit of the VIIRs heat mapping satellite. On a fire this size, 375m resolution is just fine. There are some places it is probably inaccurate, and I’ll call them out in the posts below. 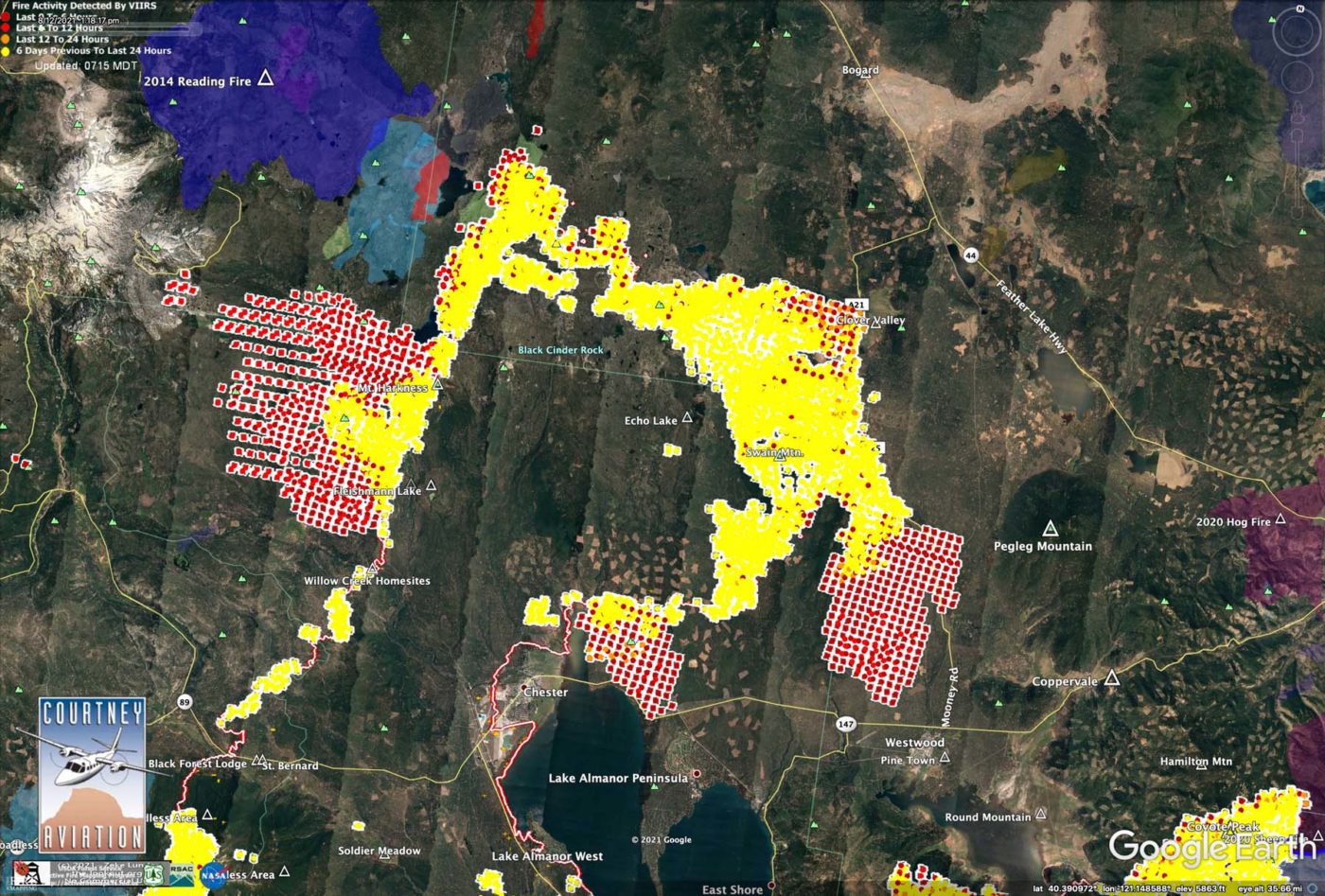 Last night’s fire spread on west side. The area on left looks like it is probably somewhat inaccurate on the left. If not, that area spread 13,000 acres. On these sorts of maps, widely space linear groupings of heat are often caused by the satellite imaging an area with extreme heat from a very low angle – the satellite scanning this fire could have been over Hawaii or Denver. Heat in the column can get shifted in the imagery, so a grain of salt if needed. That said, knowing the fuels in that area, it is not impossible the fire ran that far. Pretty confident in the mapping around Chester and Westwood.

So after a pretty quiet day, we had explosive growth of the fire last night. Pretty much all of the hot spots we have been tracking here blew up under massive thunderheads. When we get towering clouds, they build up and collapse, and we can get wild outflow winds that travel many miles. These sorts of winds are what caused the incredible blowup which killed the entire Granite Mountain Hotshot Crew at Yarnell Hill, Arizona, (2013)

Here is an image of the pyrocumulus clouds that gave us these conditions, around 7 pm. 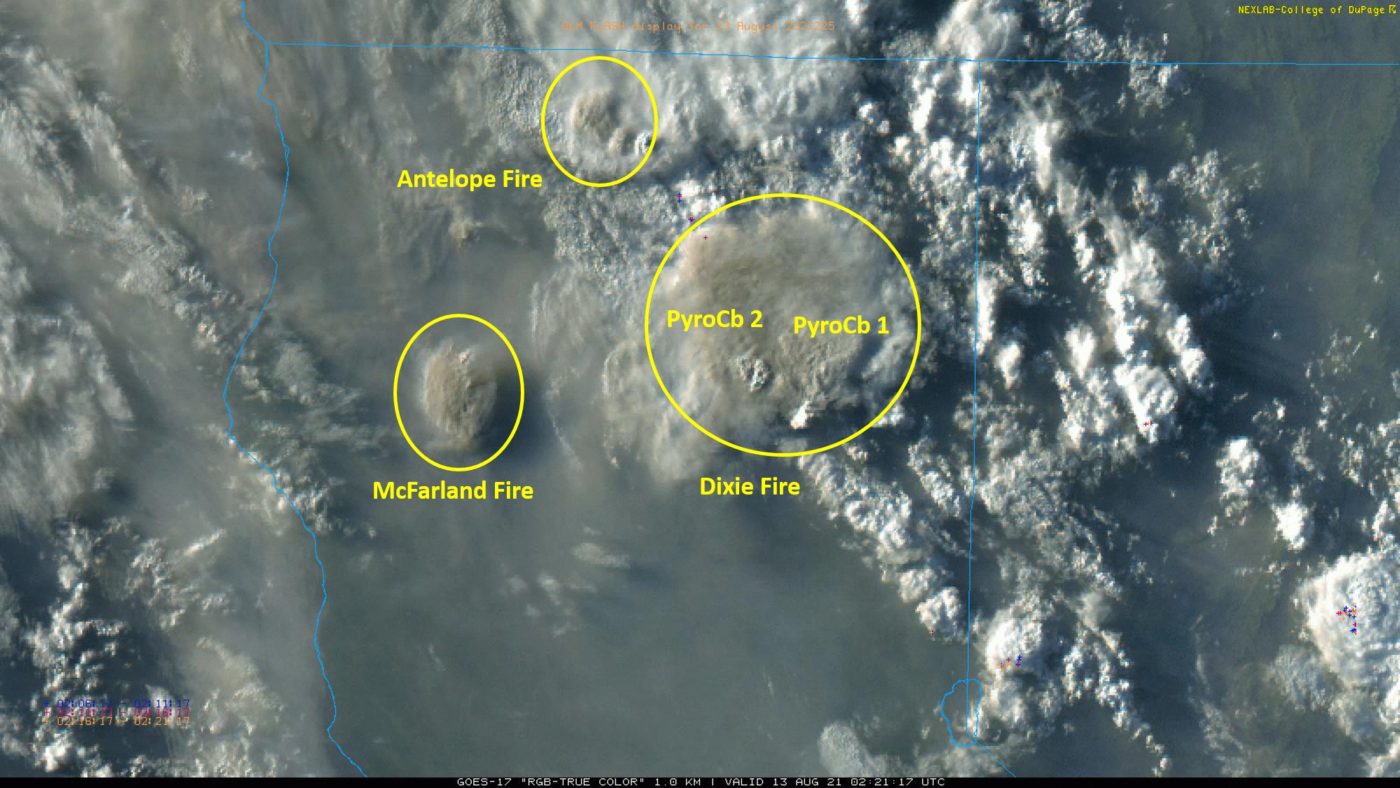 Outbreak of at least four thunderstorms generated by wildfire (#pyroCb) in Northern #California over the #DixieFire, #AntelopeFire, and #McFarlandFire. Note the smoky anvil clouds at about 30,000 ft. Dixie Fire produced pyroCbs from two separate regions of the fire front. #CAwx pic.twitter.com/P3gZ32UDi6

At 10 pm on 8/12/21 there was a very wide fire front moving to the south toward Highway 36 to the west of Westwood. There was also fire on both sides of A-21 north of the RR crossing at Duck Lake, 3 miles north of the Westwood Y Market on Highway 36.

This image shows the fire front at 9:30 pm. The right hand flank looks to be to the west of Westwood. Maybe around the WW dump.

Another area of critical concern is in the area on Highway 36 between County Road A-13 and the Chester Causeway. The fire is pushing down toward Hwy 36 from the NW. 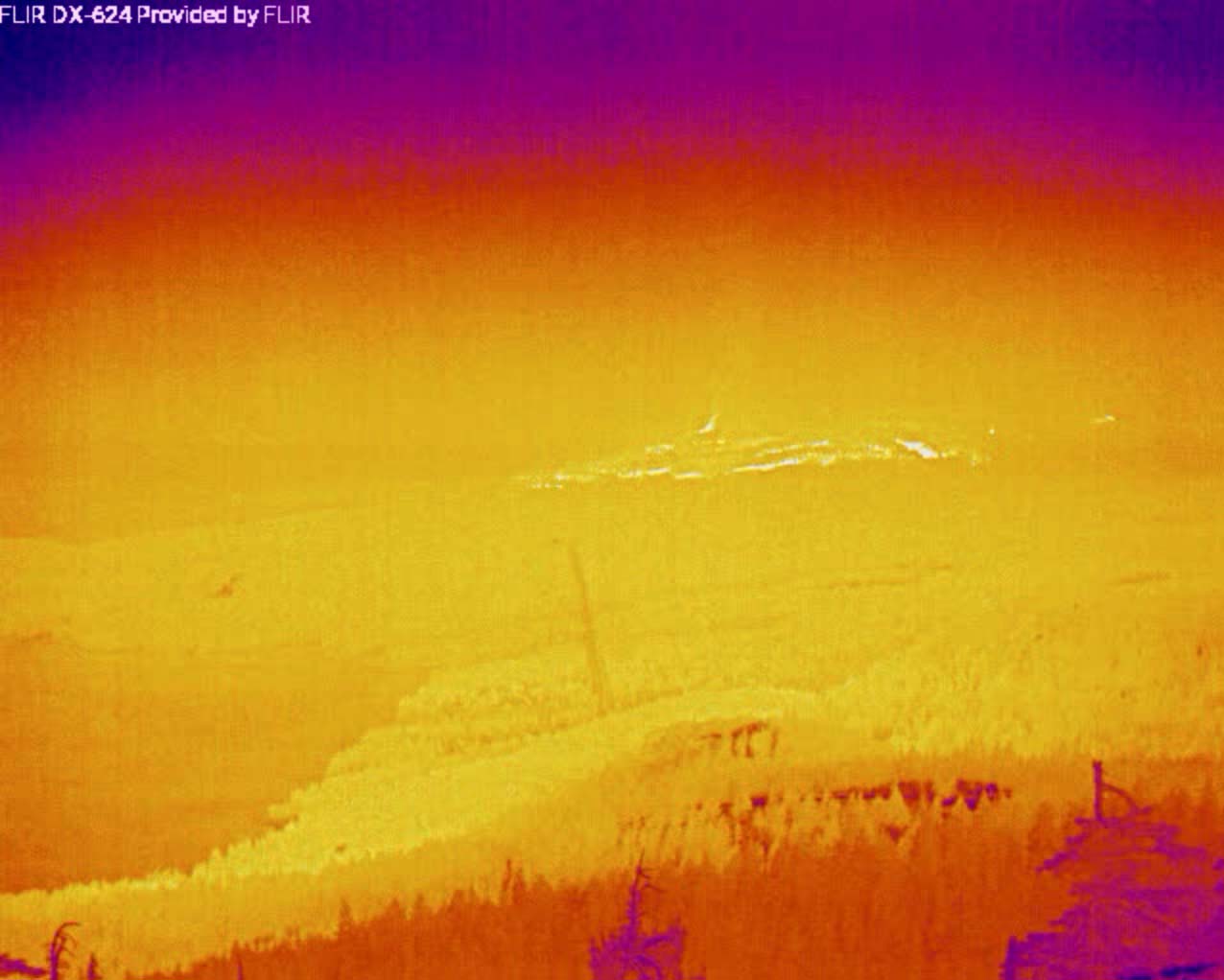 Fire has pushed about 100′ from HWY 36 in between A13 and Northshore campground. It has produced one small spot over 36 but hotshot team has a circle around it. Fire behavior has calmed down a lot but big concern is outflow. Ton of assets in place.

@CphilpottCraig is photographing the fire along Hwy 36. He is a good/trusted source for info.

At 1:15 am, the NE part of the fire threatening WW is about a mile north of Duck Lake on the east side of A-21, per Matthew Henderson livestream. The bulk of the wide fire front is north of Hwy 36, between WW Dump and Hwy 147.

The portion of the fire that was taking off yesterday around Willow Lake looks to be burning north into Lassen Park with great enthusiasm, and likely taking out Drakesbad. Kind of hard to get a peak at it with the clouds shadowing the weather satellite, but when it is showing, it is quite a run. The left-hand blob is around Willow Lake, middle left blob is pushing down toward Highway 36 between Causeway and A-13, and right of the 3 blobs is the fire threatening Westwood. You can see WW as the small area of light at 5-o-clock. The satellite image has a ‘city lights at night’ layer on it. 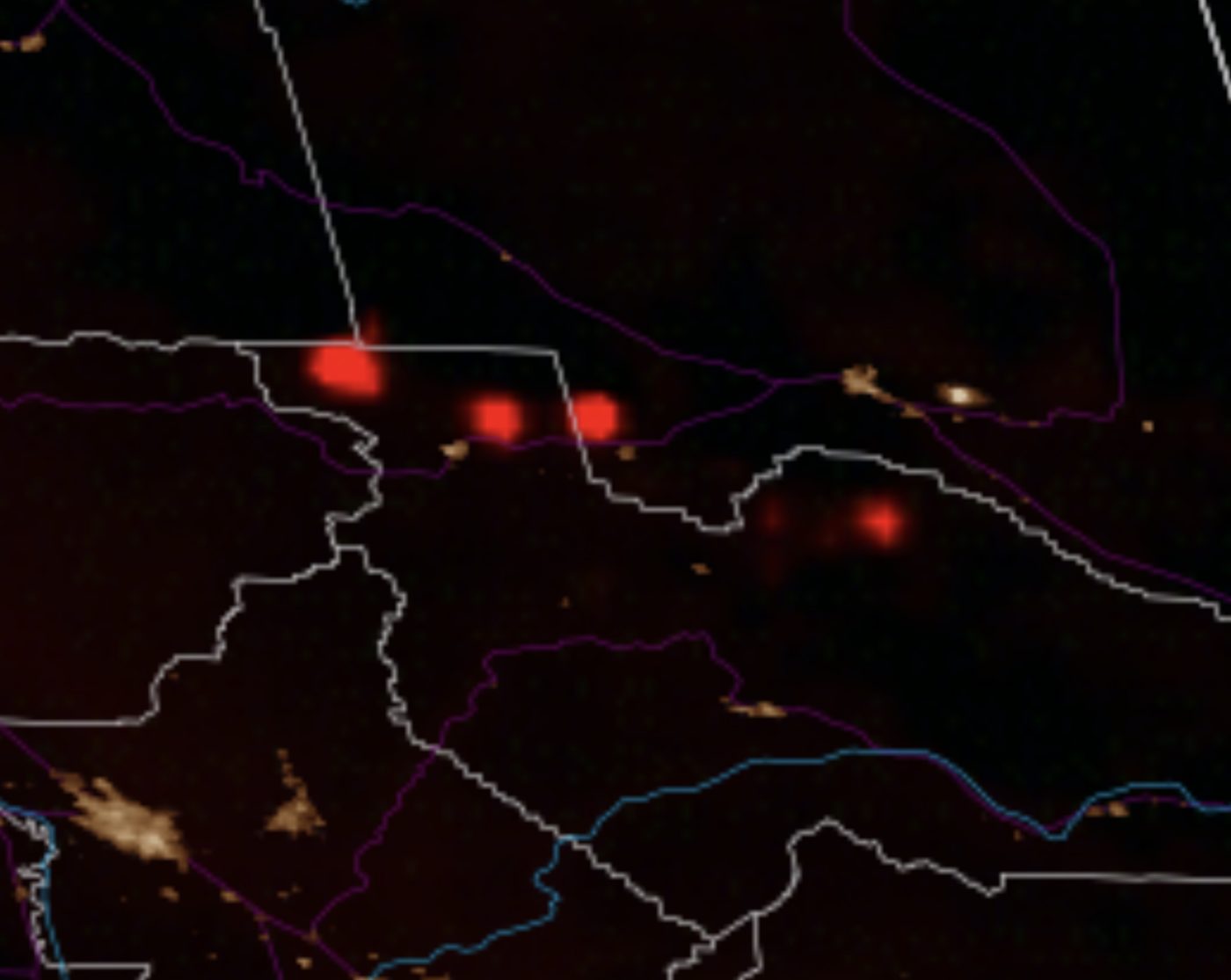 The fire crossed A-21 about a mile north of the RR crossing at Duck Lake. It was close to the Westwood Dump, about 1.5 miles from Clear Creek. 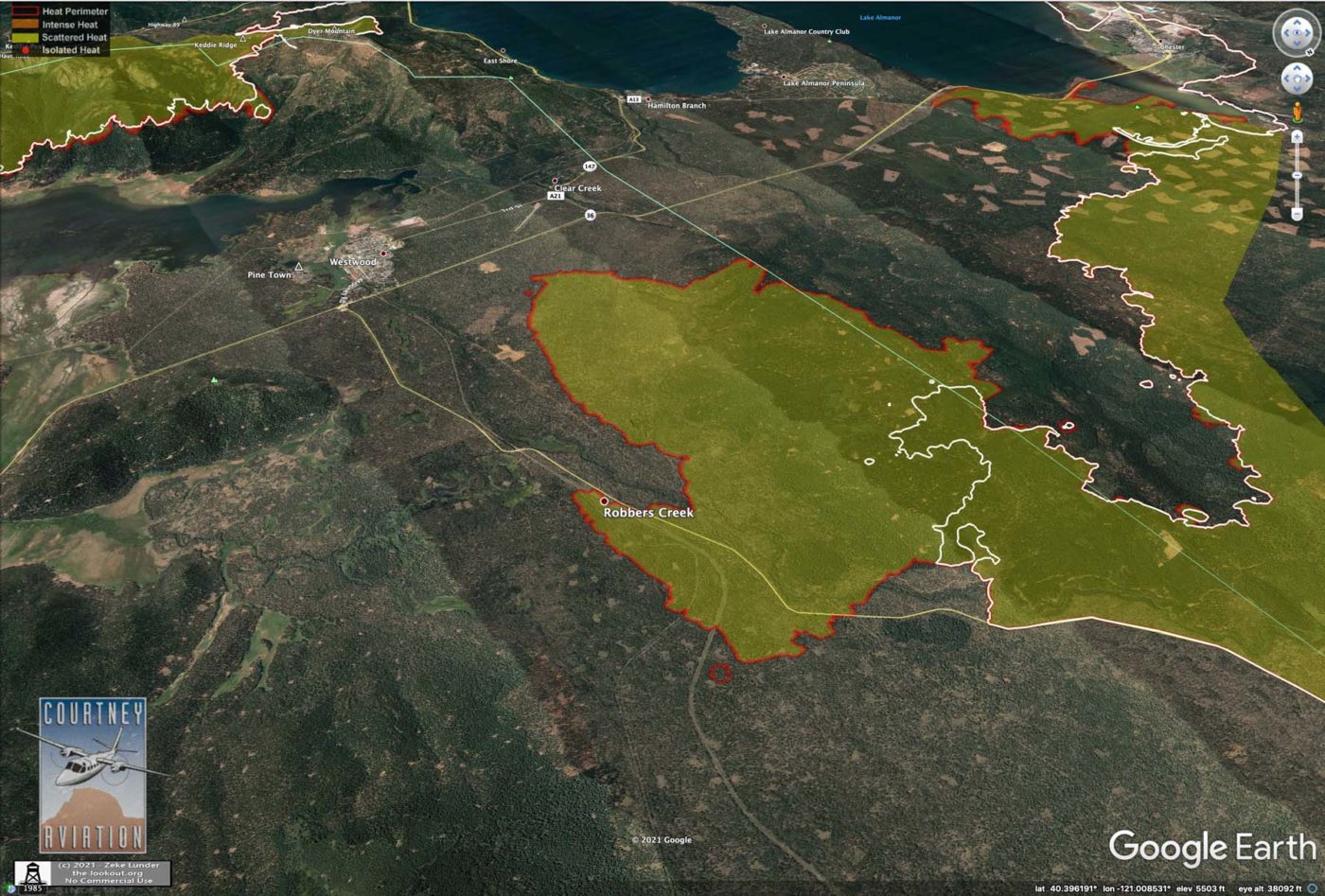 The rest of the A-21 firing operation held overnight. 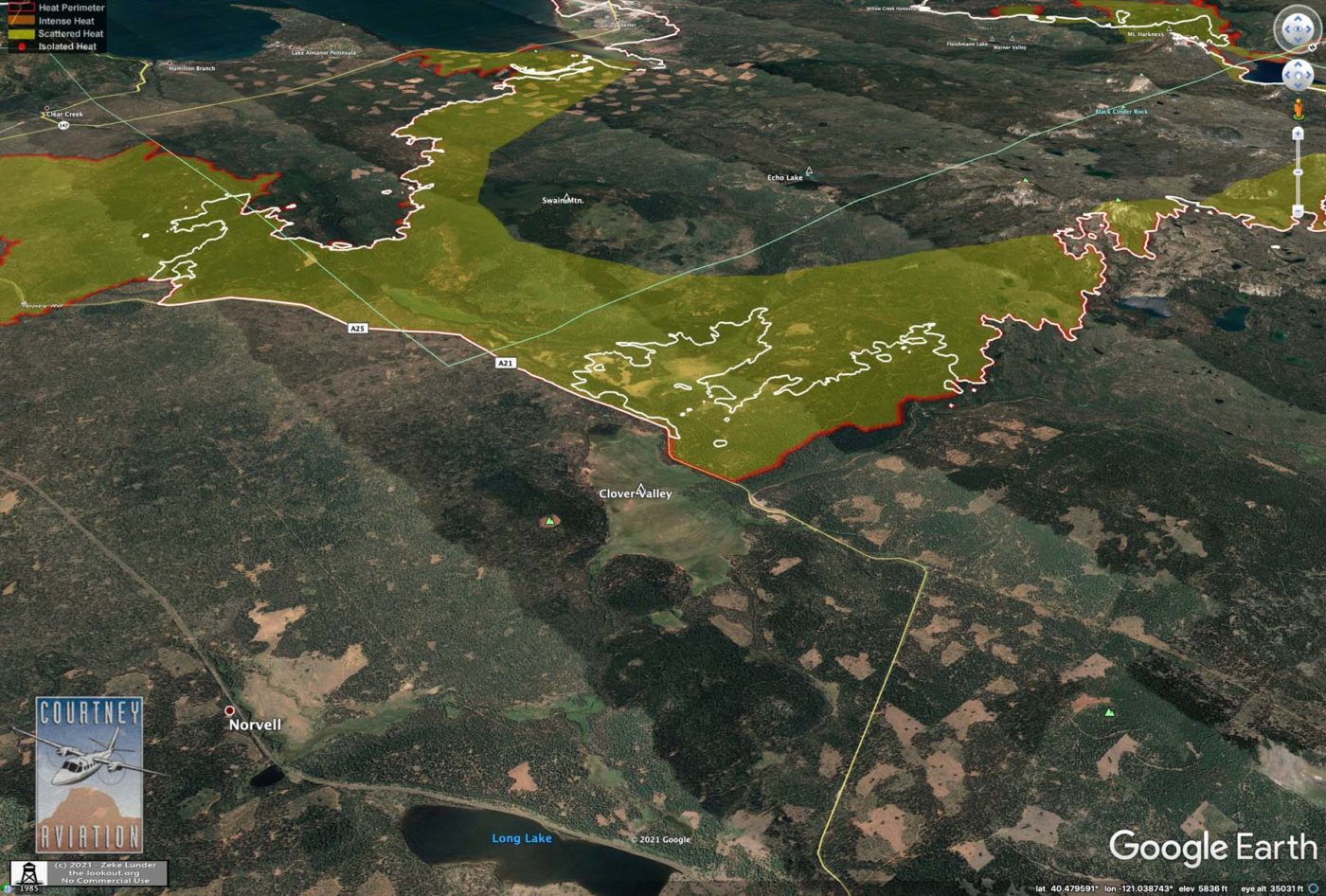 The fire had filled in most of the area between the 10 Road and Highway 36, and Lake Almanor. 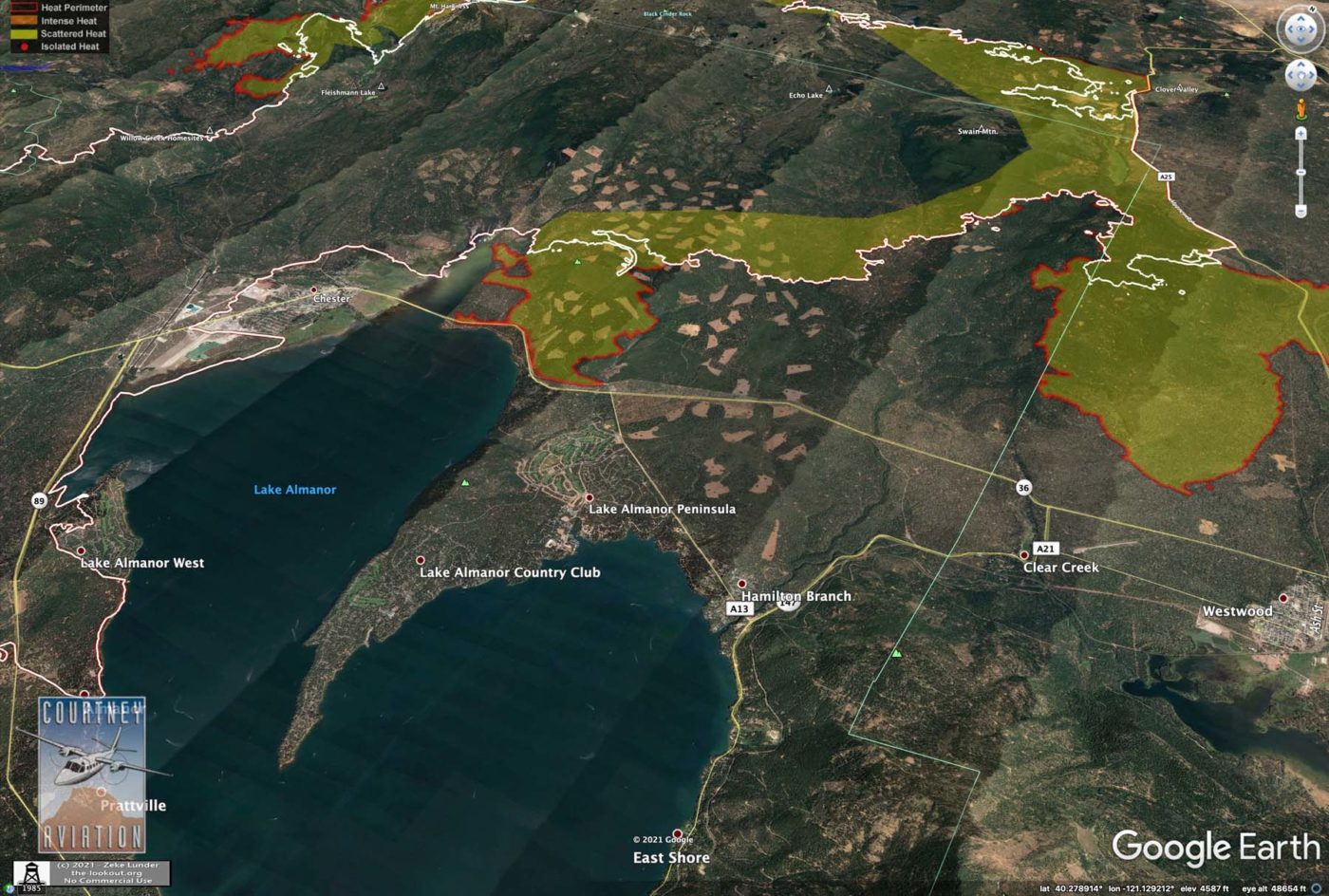 The fire did make a major around Willow Lake, and out toward the SW. 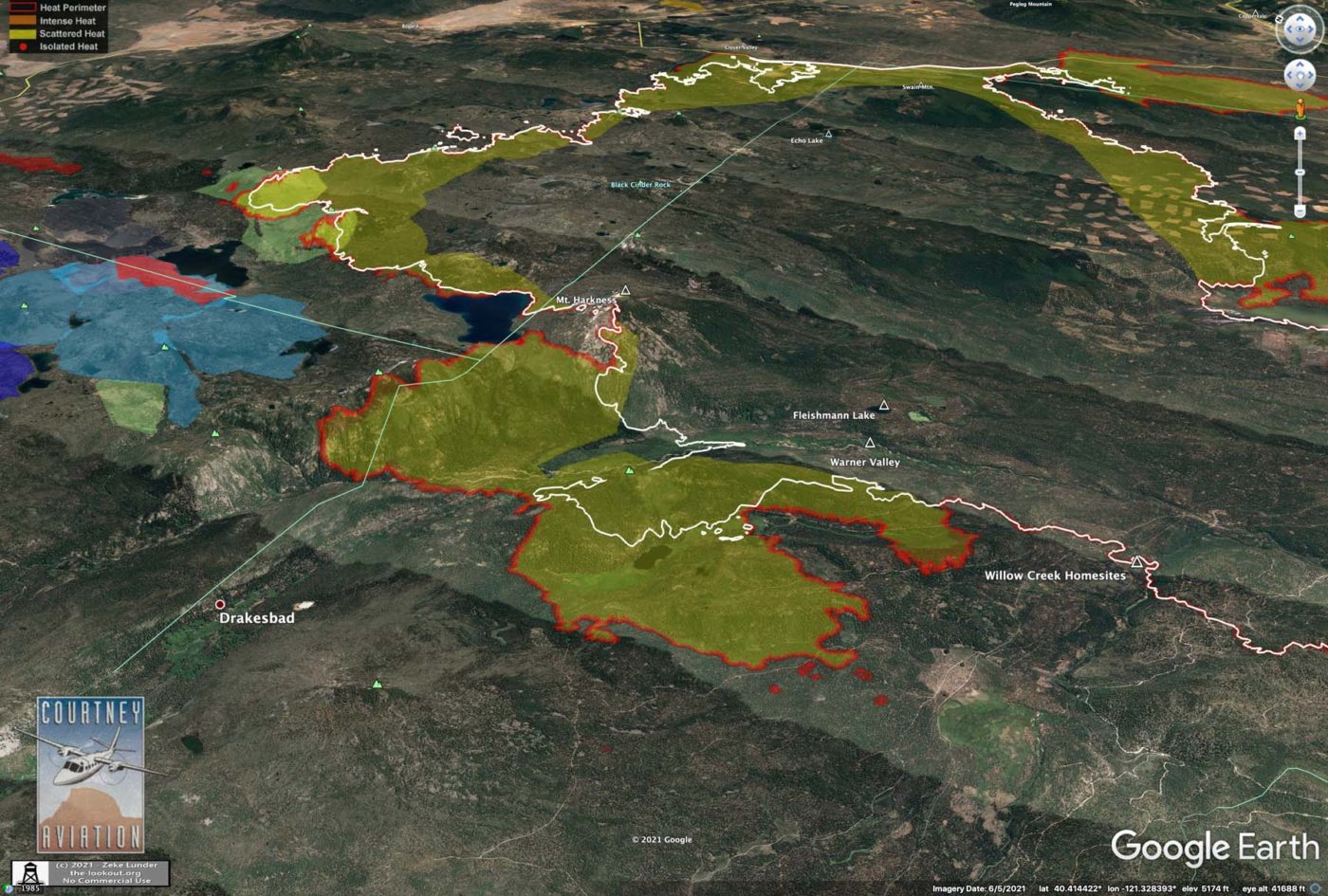 Not a lot of spread on Coyote Peak, about the same as we’ve been seeing past week or so. 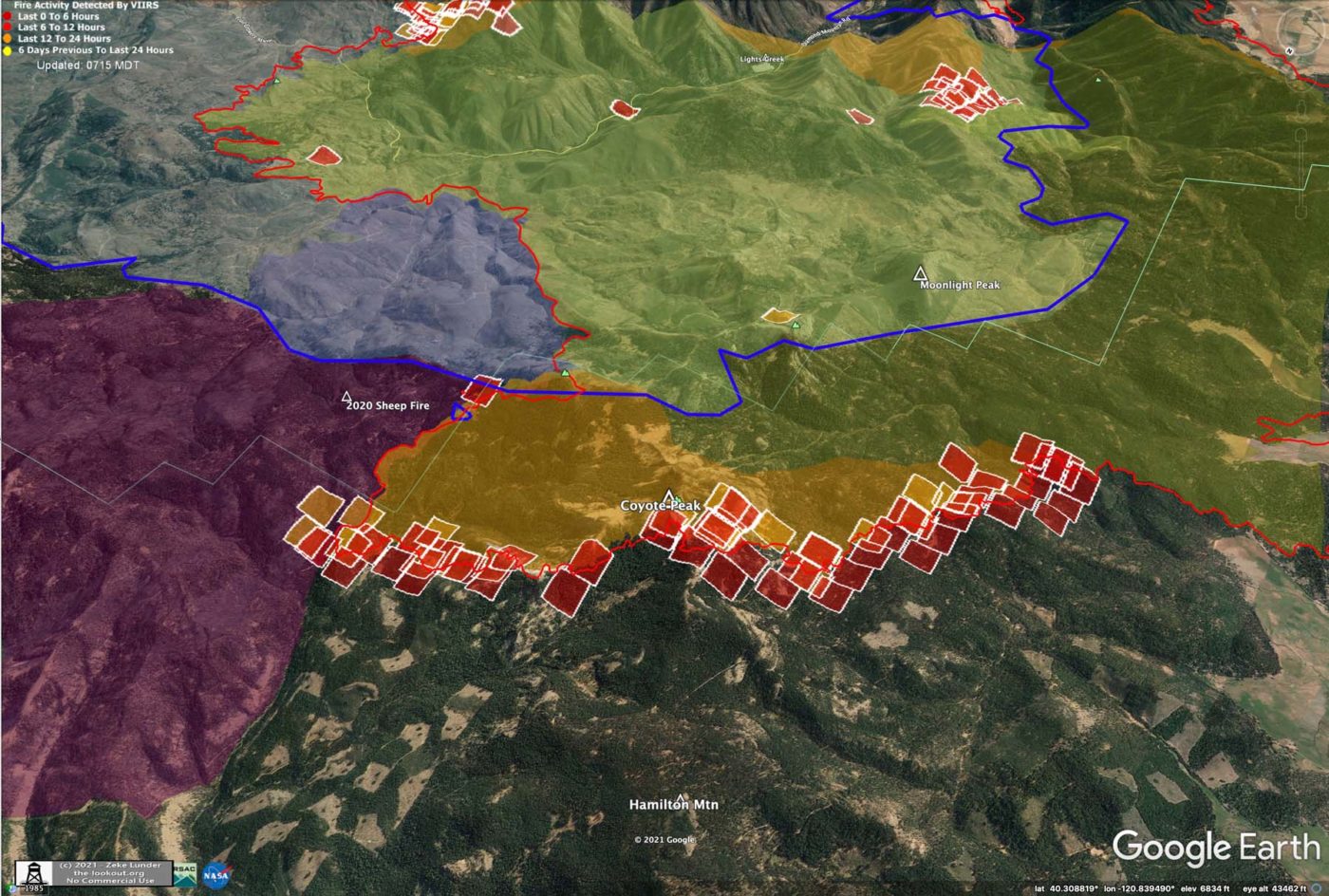 I didn’t pay much attention to what was going on here yesterday, but the fire doesn’t appear to be much closer to Janesville than it was yesterday. 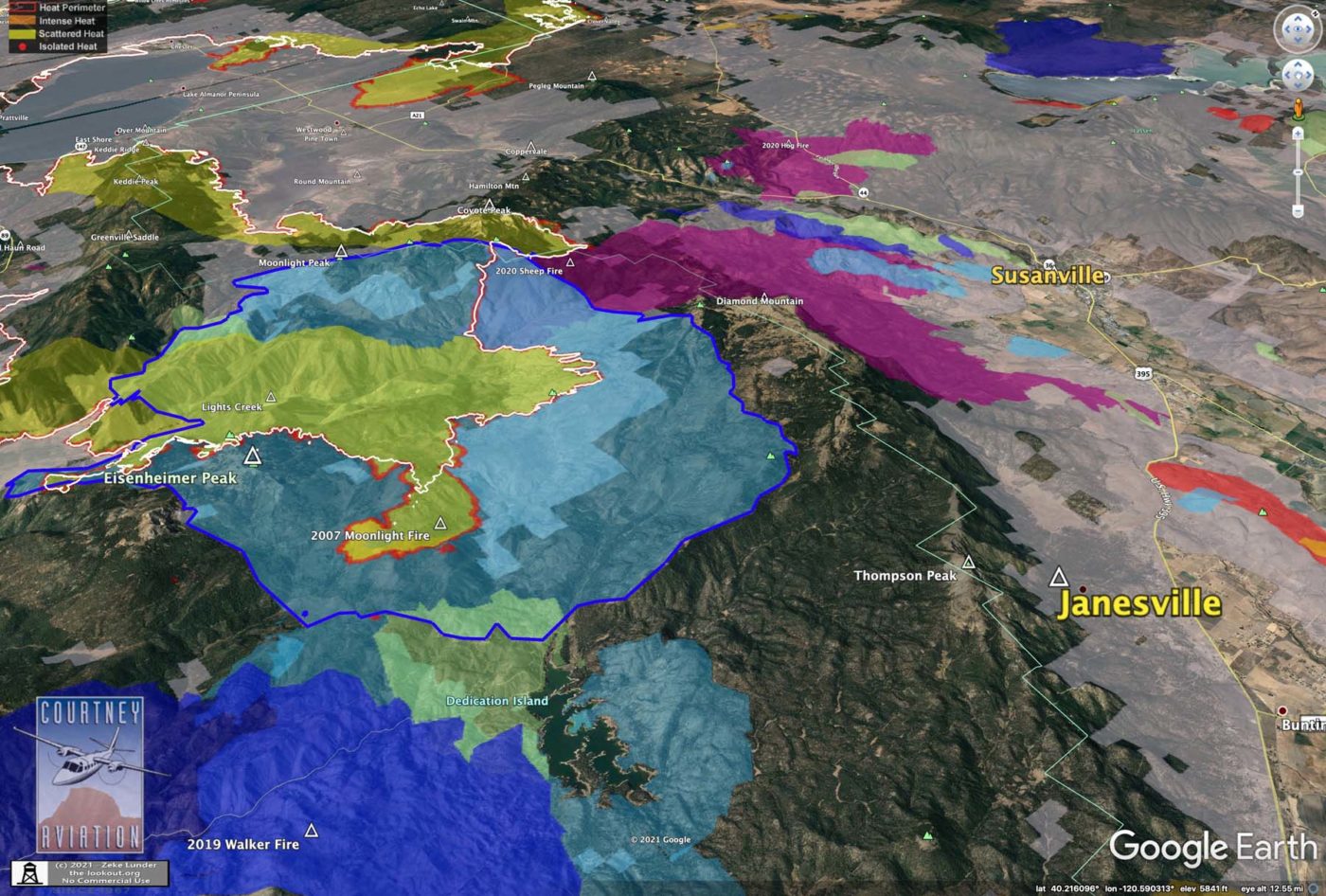 The fire spread close to the tip of Keddie Ridge. 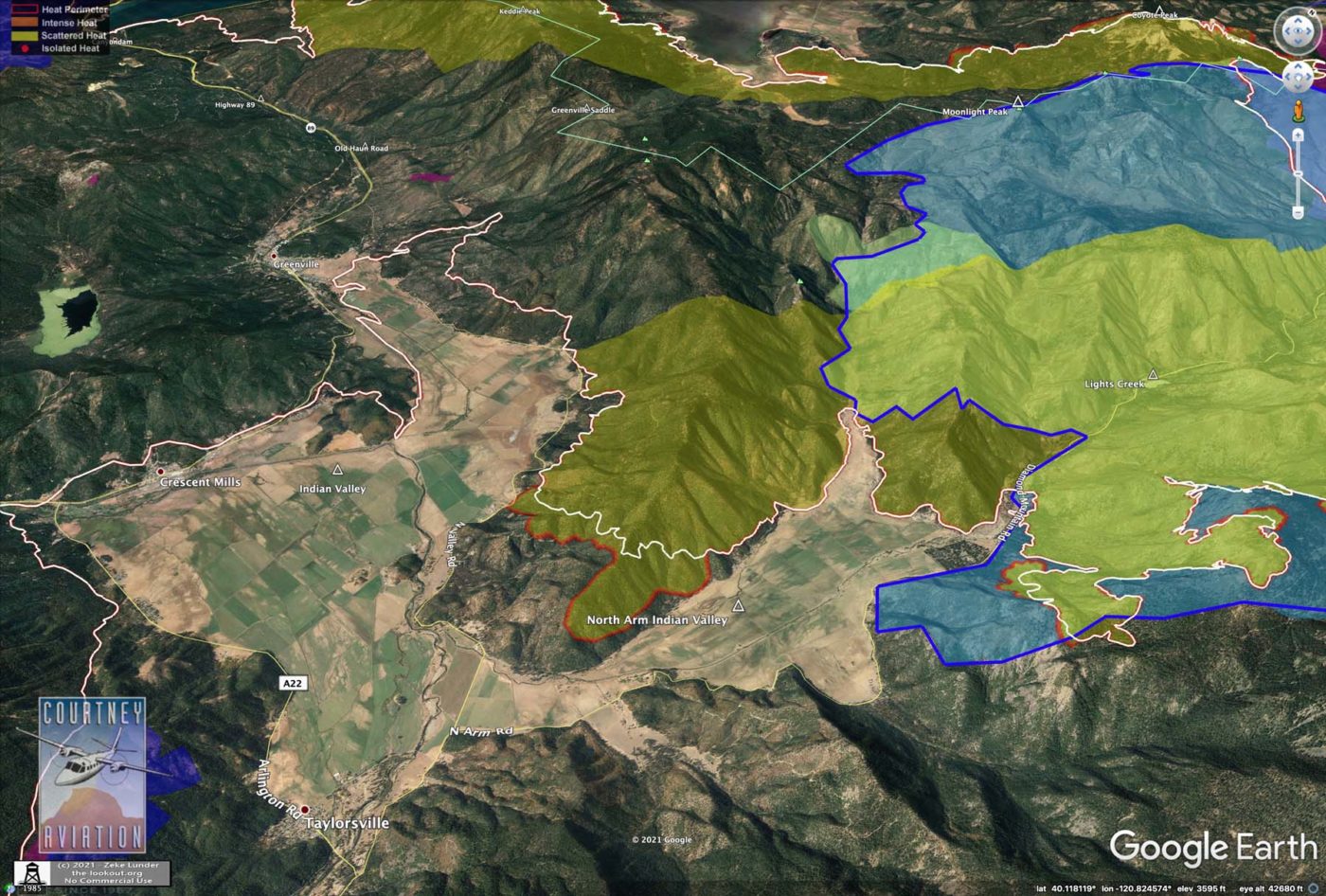 If you want to do a side-by-side geek-out on the evolution of today’s cumulus buildup vs yesterday’s here are two links.
Yesterday’s GOES-17 28
Today’s GOES-17 28
15:00 update – if anything, the cumulus buildup seems to be a little ahead today of where it was at this time yesterday. There is a cell building over Mt. Harkness, which pretty much looms over where the fire is burning at A-13 and Hwy 36.
Mt. Harkness is in top-center of image. 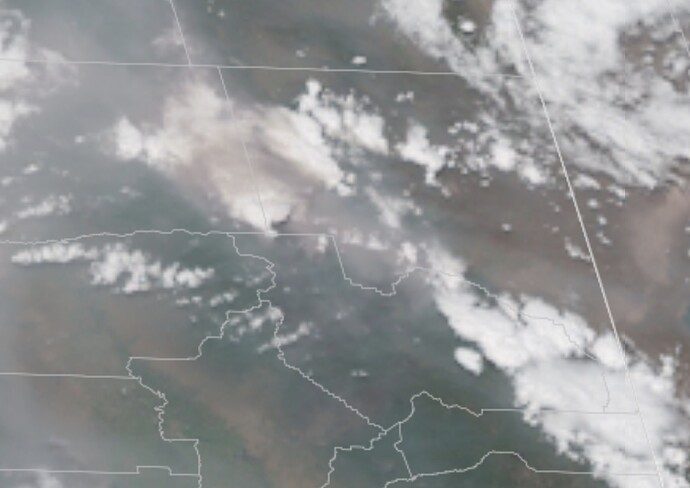 Not much to do now but wait and pray for the winds to give us a break before we lose any more of our mountain towns.

Hope all of you can find some peace and rest today. Sending my praises out to the people who are headed for Highway 36 to do their best to save our places. Westwood is a funky little collection of 100 year-old old shacks, and it is ridiculously indefensible. But for the past 42 years, it has been my family’s own funky little place. Thanks to everyone working hard to save it! 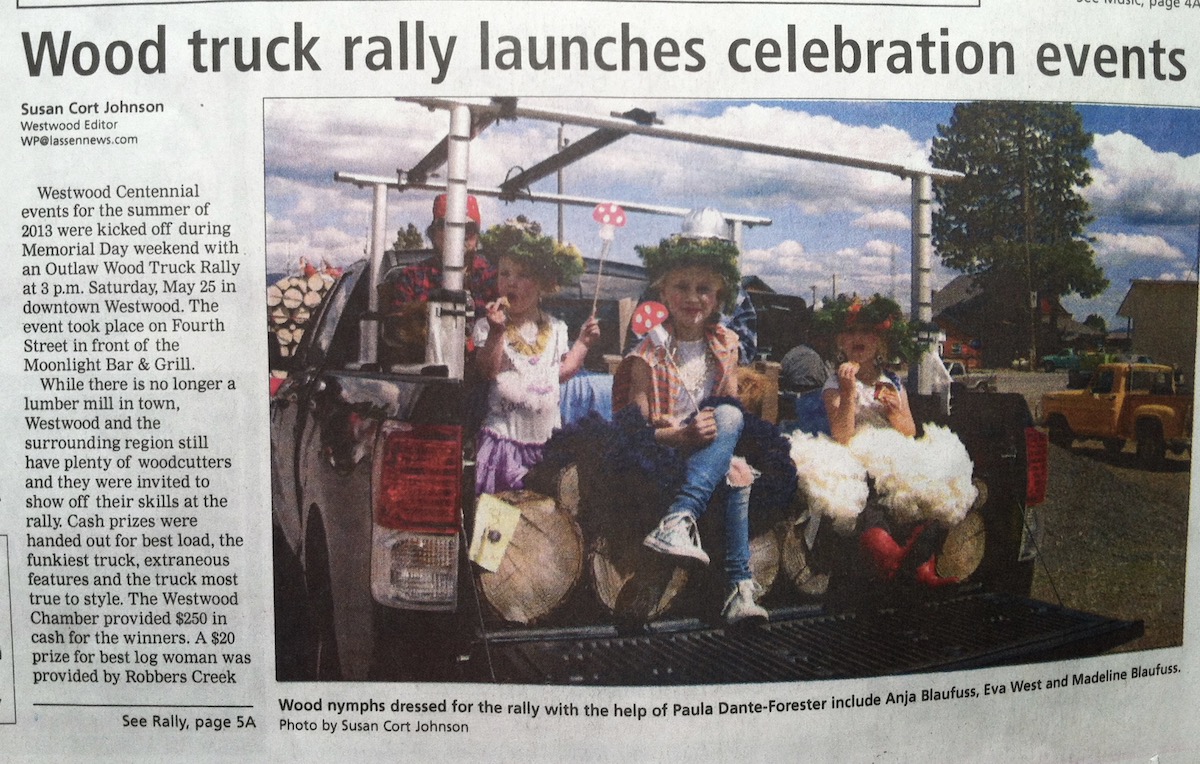 If these posts are helping you out, please consider donating to The Lookout. We are still working out what the website will be, but donations will help me work less on other projects, giving me time to create content and stories to help us move forward through this disaster.