11:20 Update:
Today’s weather is problematic for firefighters. The smoke is lifting out, and the forecasts call for increasing instability in the atmosphere. The Haines Index is a number which meteorologists use to quantify the potential instability, with a score of 6 being the highest. Today’s Haines is a 6. We often see big runs on days with a high Haines. 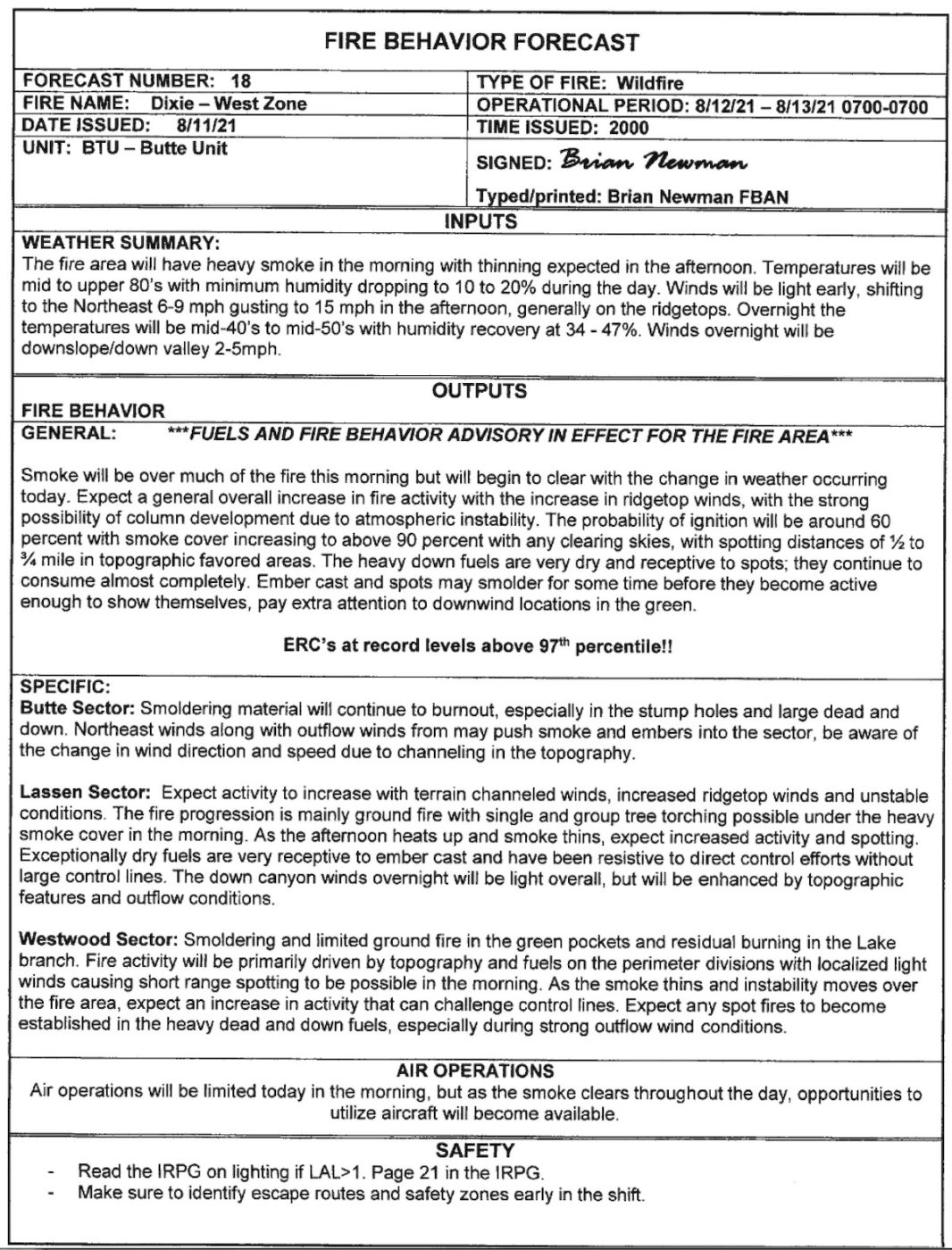 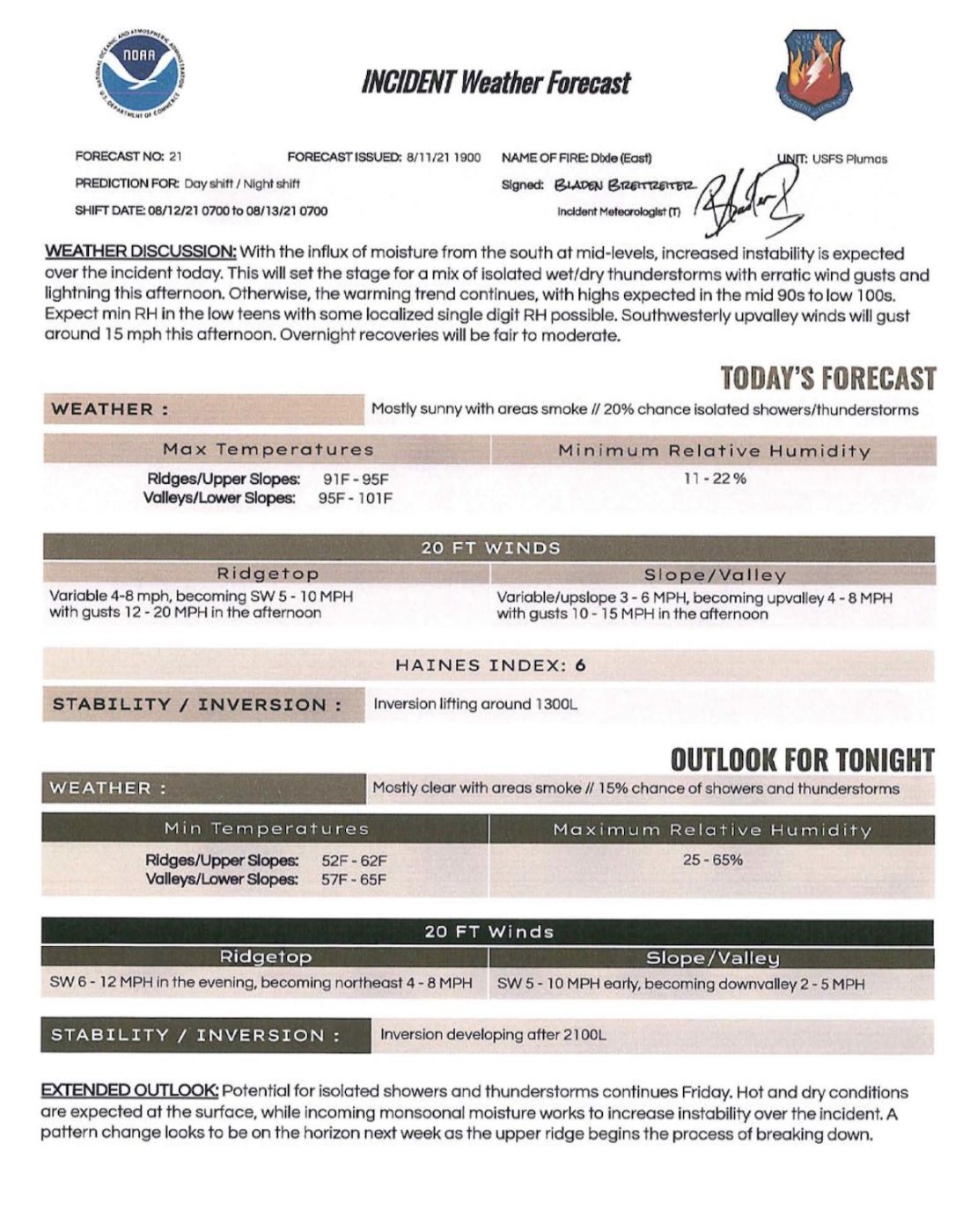 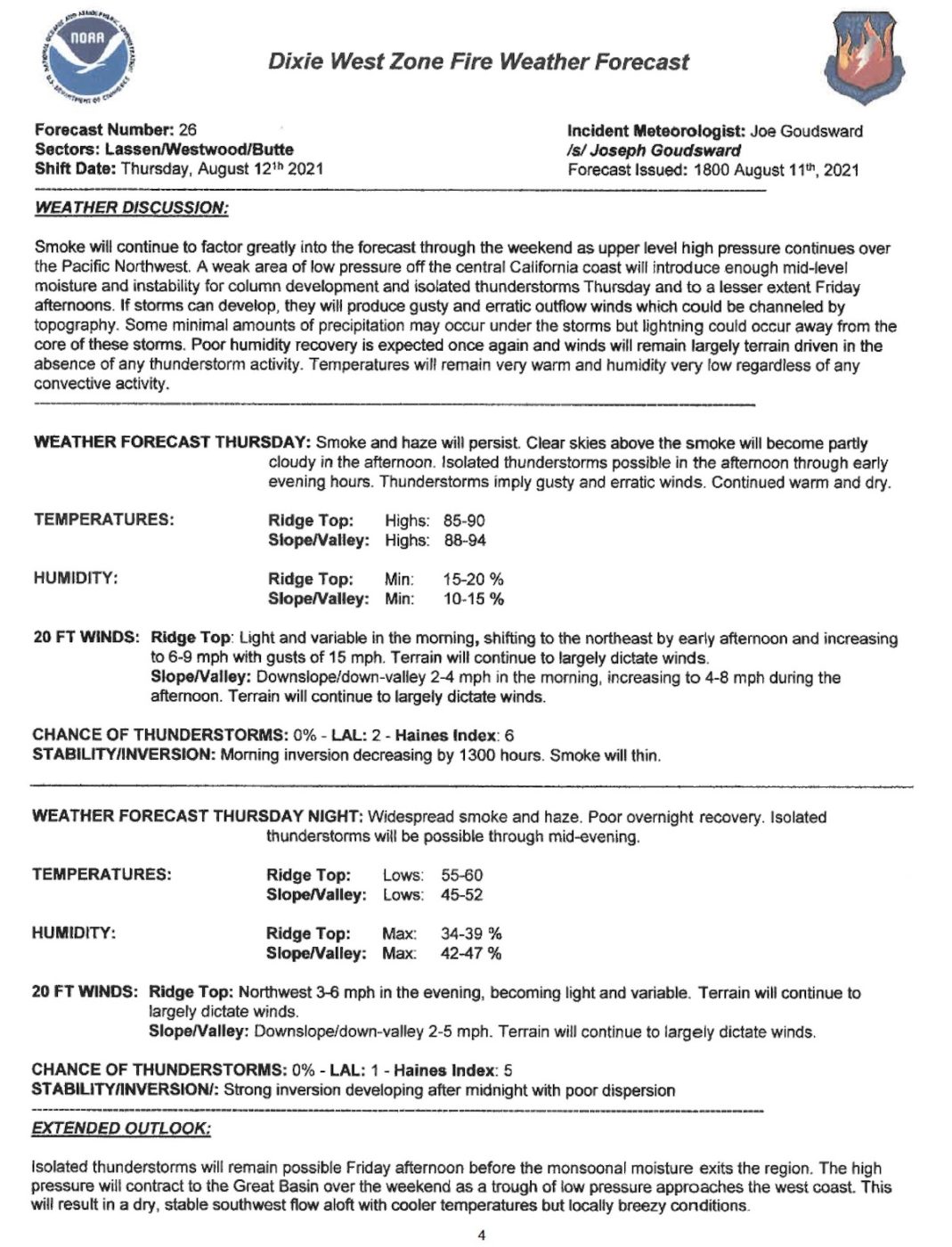 As I mentioned here before, the fire started at about 2,500 feet elevation and has spread to 7,500 feet above sea level in Lassen Park and on Keddie Ridge. Since the fire has burned to the tops of most of the mountains, it’s ability to run uphill is limited in most of the places it is burning. We’ll see our biggest runs in places it still has slope available to it – for example in Peters Creek, north of Beardsley Grade. Indian Valley sits at about 3,500 feet, and Kettle Rock, at the top of Peters Creek, is over 7,500 feet, so when the fire that has slopped over the ridge gets into the bottom and runs this drainage, which seems likely to happen, we’ll see incredible fire behavior that will spot all over the east side of Kettle Rock. 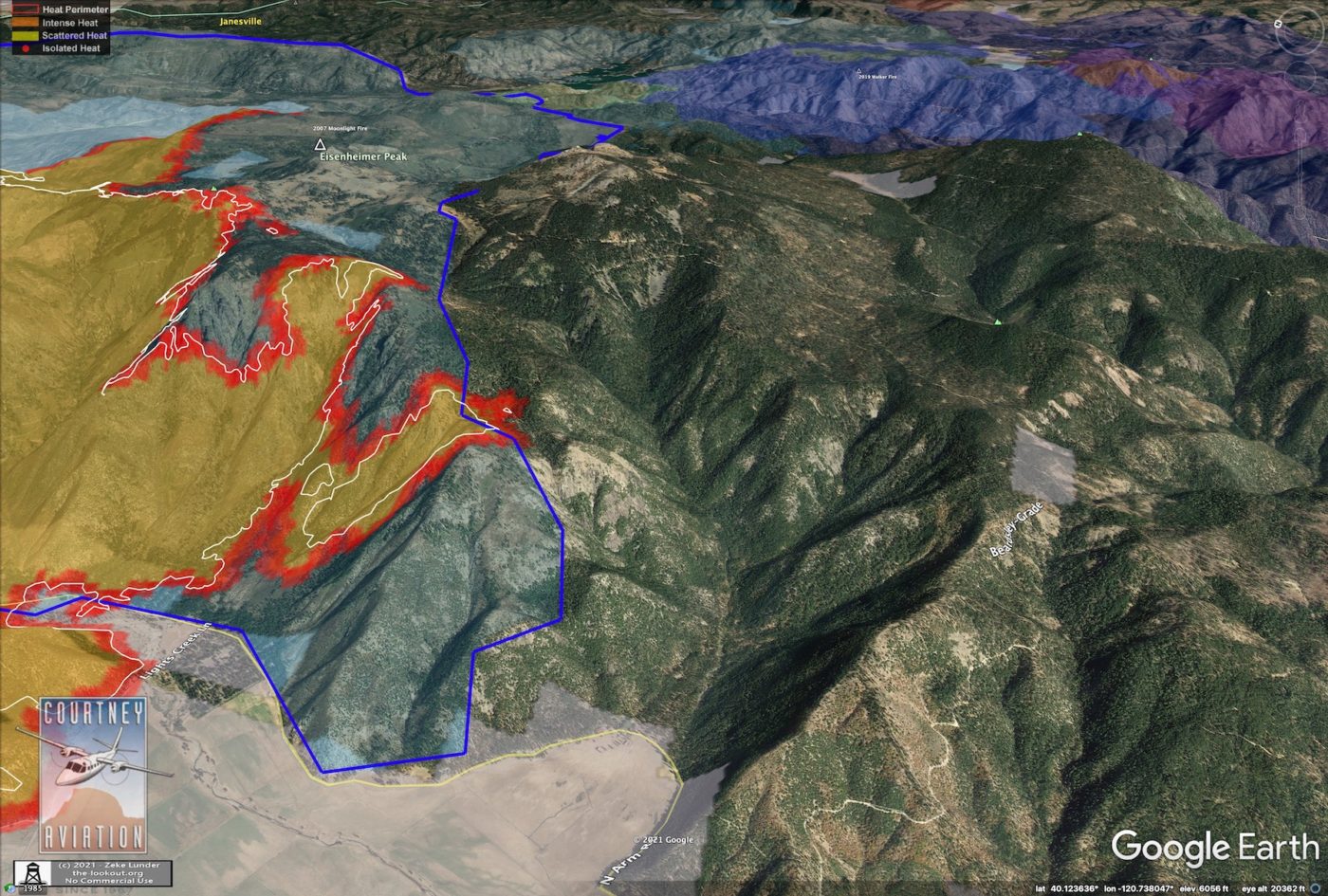 Last night’s IR got flown at about 2:30 am. There are a few new/interesting things on it, so here is your update.

The fire made a 2 mile run east on the north side of Eisenheimer Peak. The portion of fire burning in 2007 Moonlight Fire footprint (blue outline and fill) has been stalling out in areas on the private lands which were cleared and replanted after the last fire. The private lands are shown in light blue. This seems to especially be the place where there is less slope. Slope has been a factor in most of the biggest runs in this area. The new run is parallel to ‘The Escarpment’ which is what we call the of crest of Diamond Mountain and Thompson Peak (and on down along the ridge of the Sierra Nevada Mountains all the way down nearly to Mexico). The escarpment is infamous for firefighters because it plays host to strong downslope ‘Mono Winds’ which can carry fire off the mountains and down to the eastside valleys with ferocious rates of spread. Every firefighter has seen this video of the Eagle Fire, near Milford, many times. The Mono Winds are the reason everybody is desperate to keep every fire away from the top of the ridge.

The 2020 Sheep Fire (purple) crossed the escarpment and ran down into the Honey Lake Valley, as did the Beckwourth Fire, earlier this summer. But 2007 Moonlight, 2007 Antelope/Wheeler Complex, the Boulder Complex around Antelope Lake, and 2019 Walker Fires were halted before they could get over the crest. Dixie Fire is shown in shades of yellow, orange, and red, here. White line shows fire spread in past 24 hours. 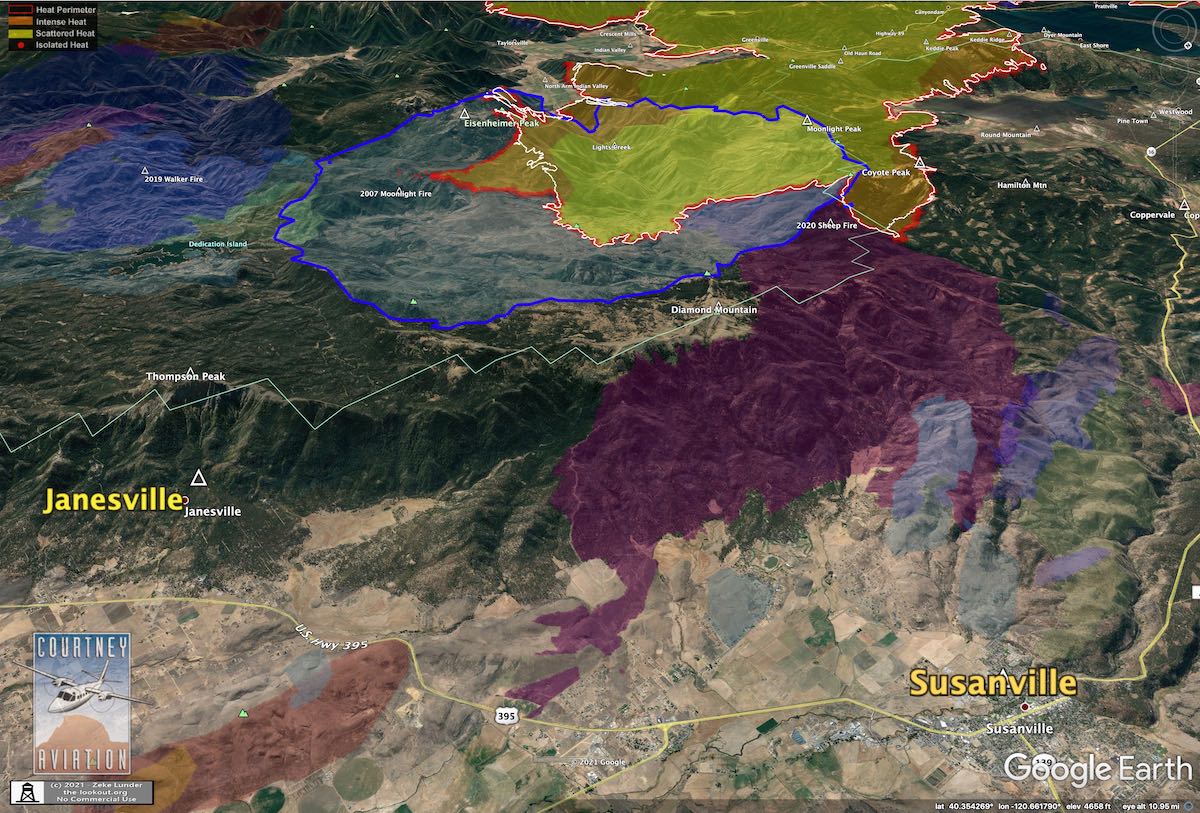 The new run is shown on orange on right side of this image. It does not bring the fire any closer to Janesville than it has been for past 4 or 5 days. The new, active part of the fire was about 10 miles away from Janesville when this imagery was captured, 2:30 am, 8/12/2021. 2020 Sheep Fire in purple. 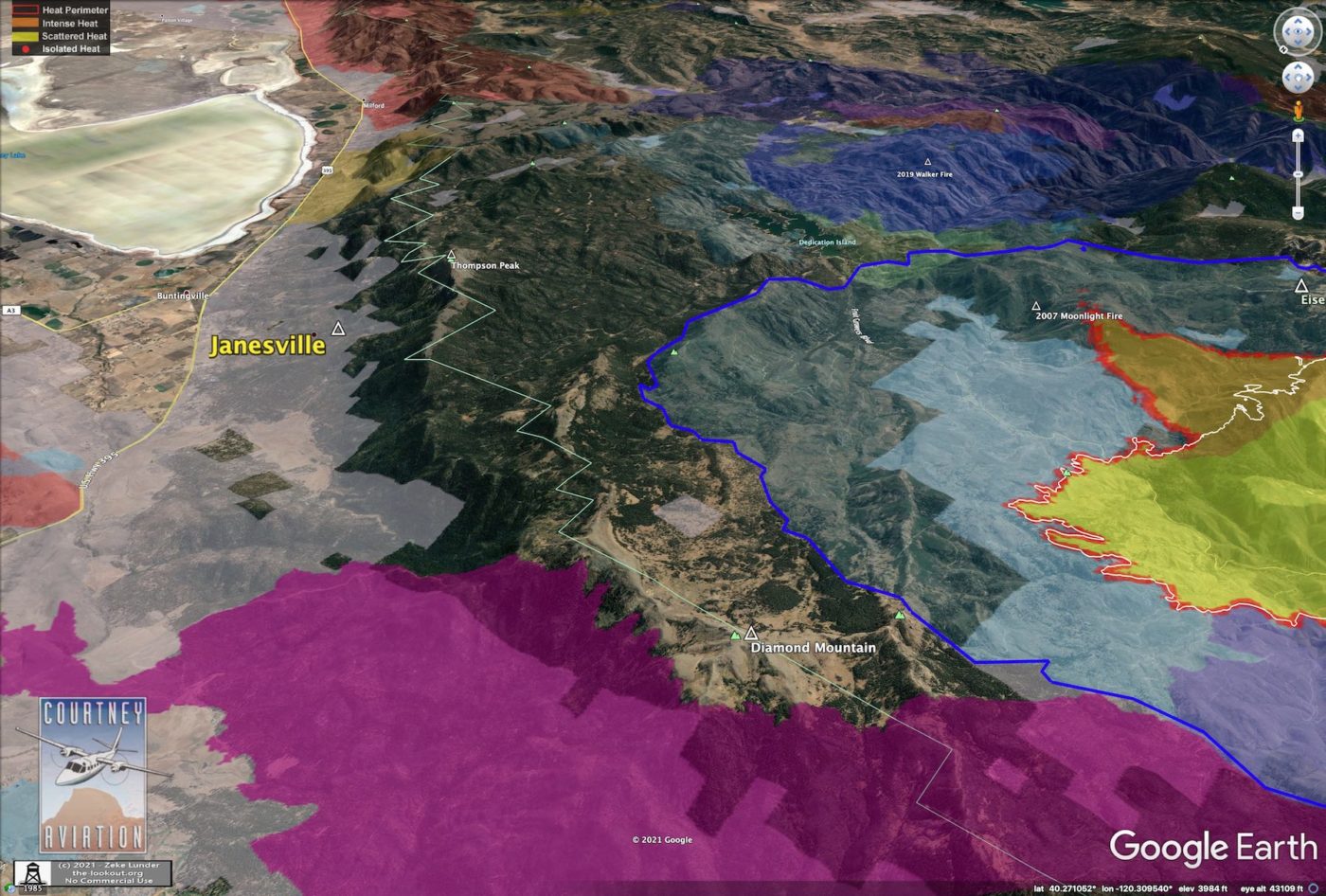 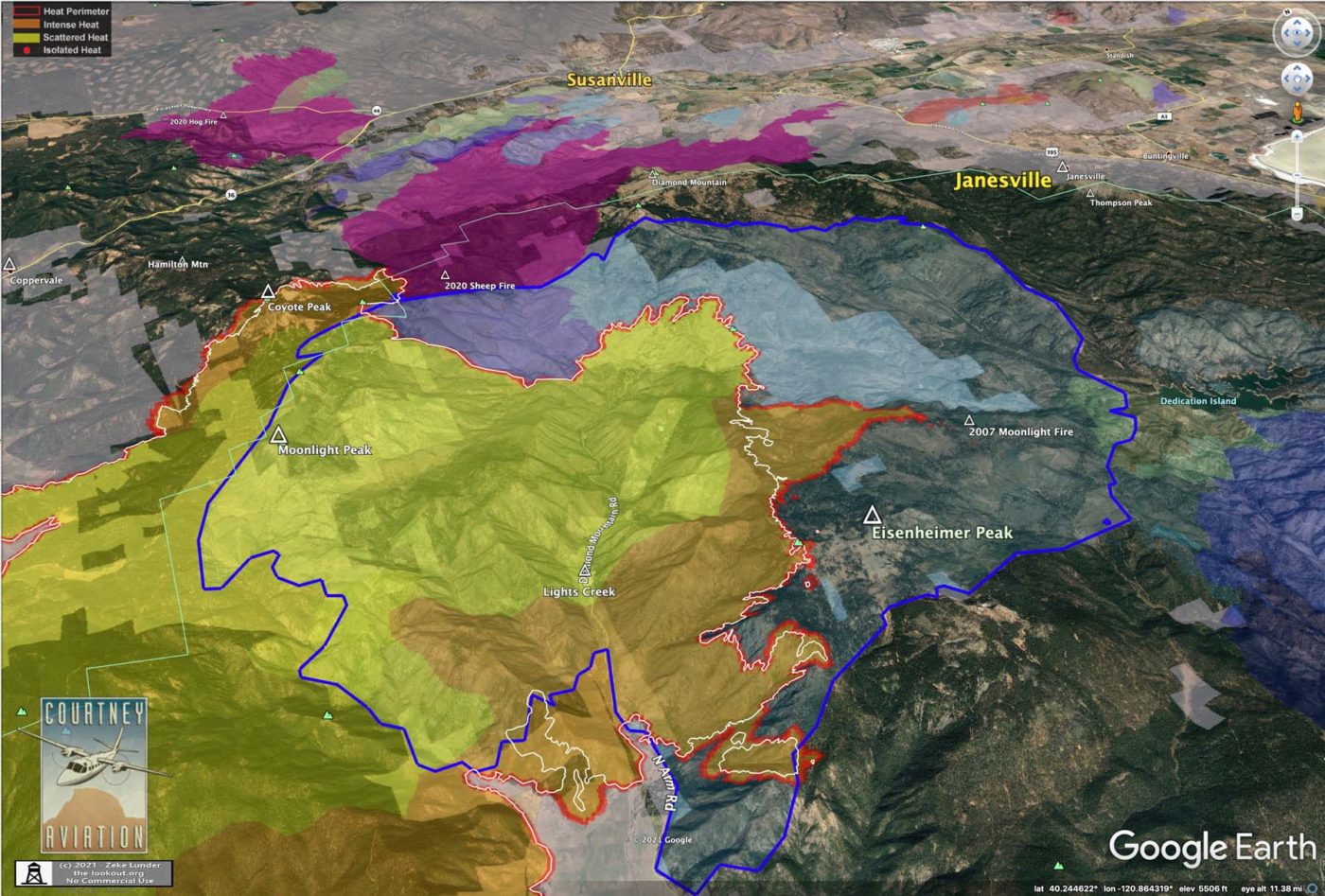 As with last night, there is not a lot of spread at the junction of the Dixie Fire and 2020 Sheep Fire. This view looks south from over over Fredonyer Pass. 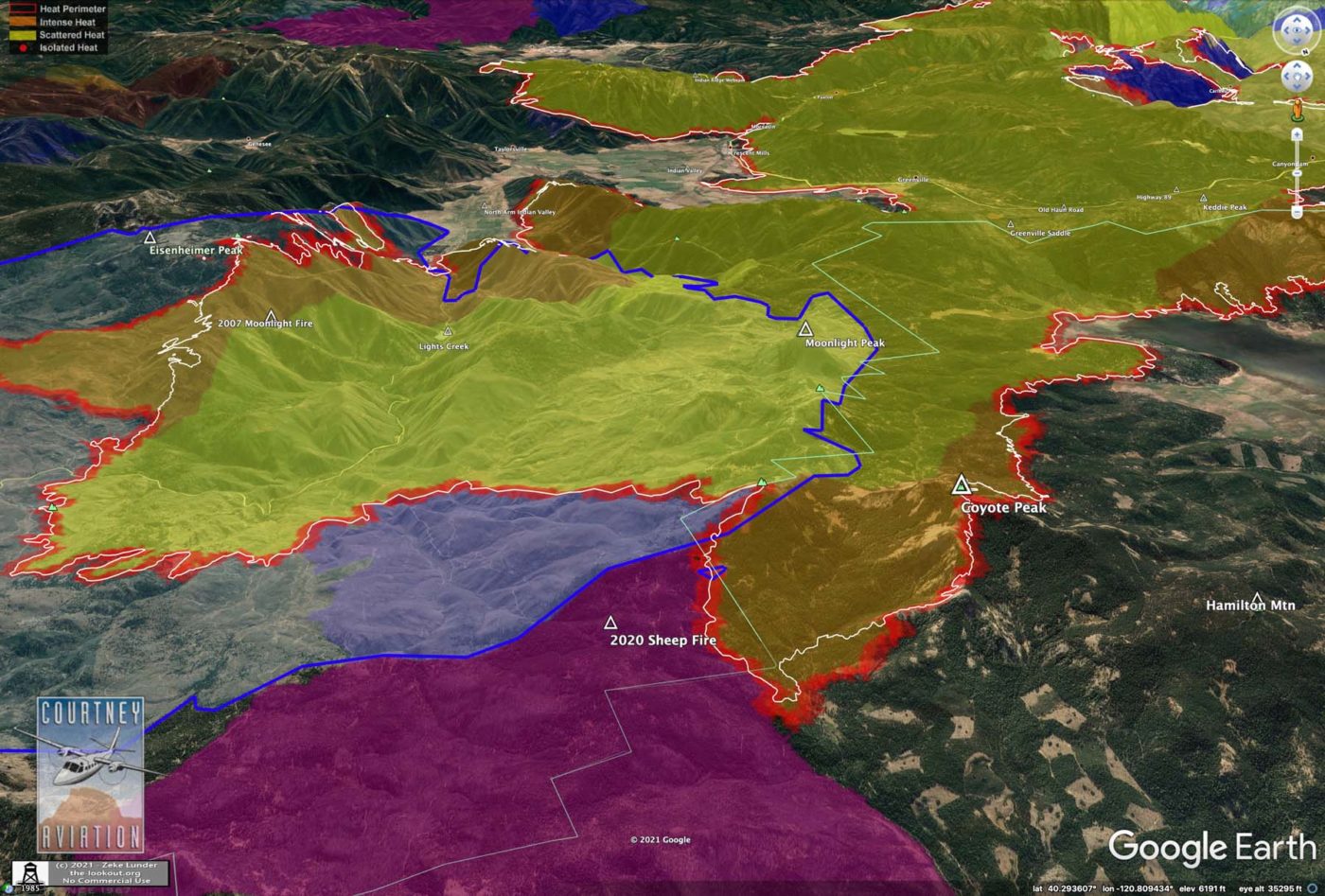 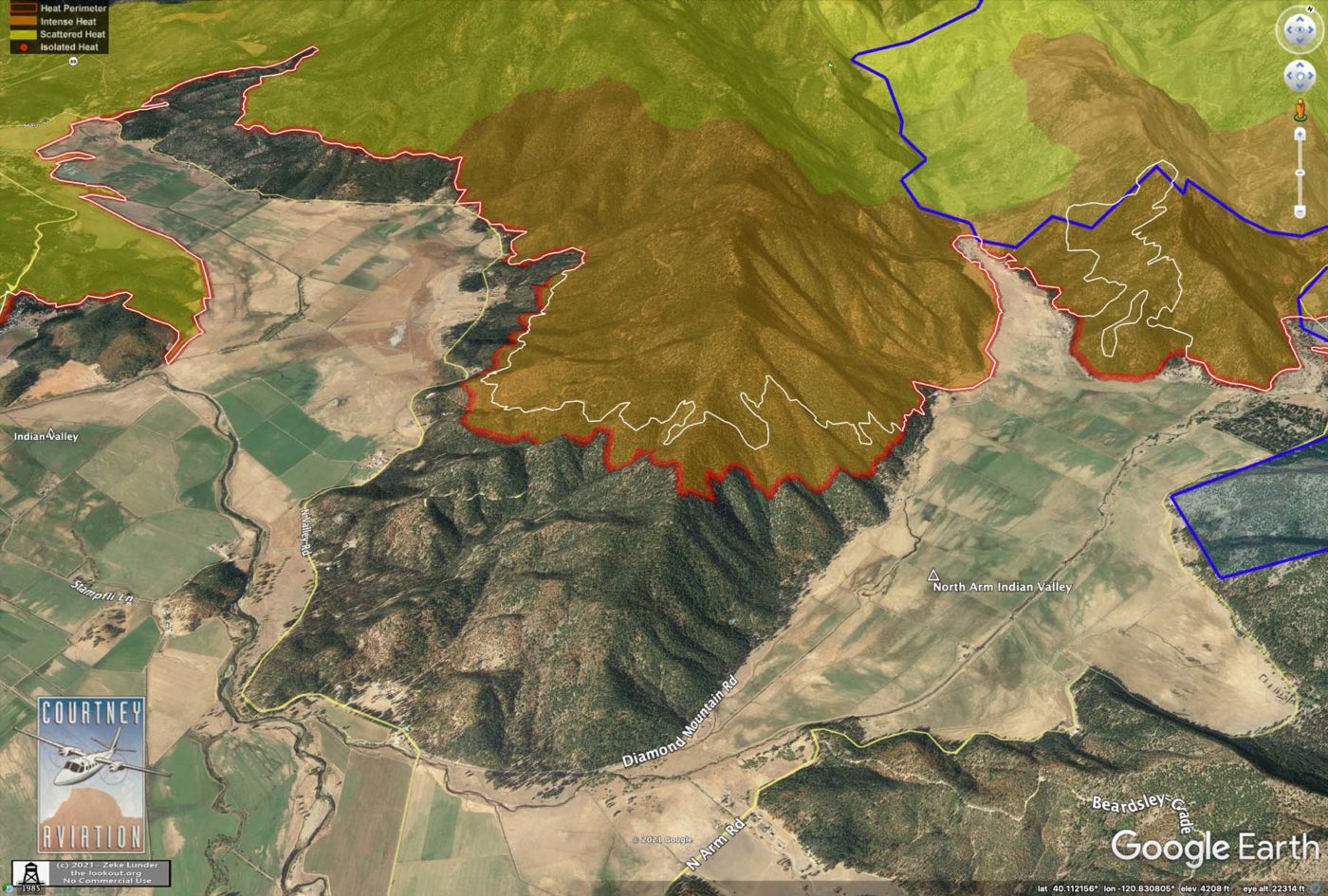 Looking north over Westwood and Clear Creek, there is some action on the flank of the fire north of Highway 36.
There appears to be a new firing operation taking place along the ’10 Road’, to contain areas of the fire burning between 10 Road and Mud Creek Rim. There is also broad growth either way off of the tip of the run that came south from the firing operations on A-21 near Swain Mountain Snowmobile Area parking lot. A-21 seems to be holding, which as I mentioned before, has been one of the major ‘wins’ of this firefight. 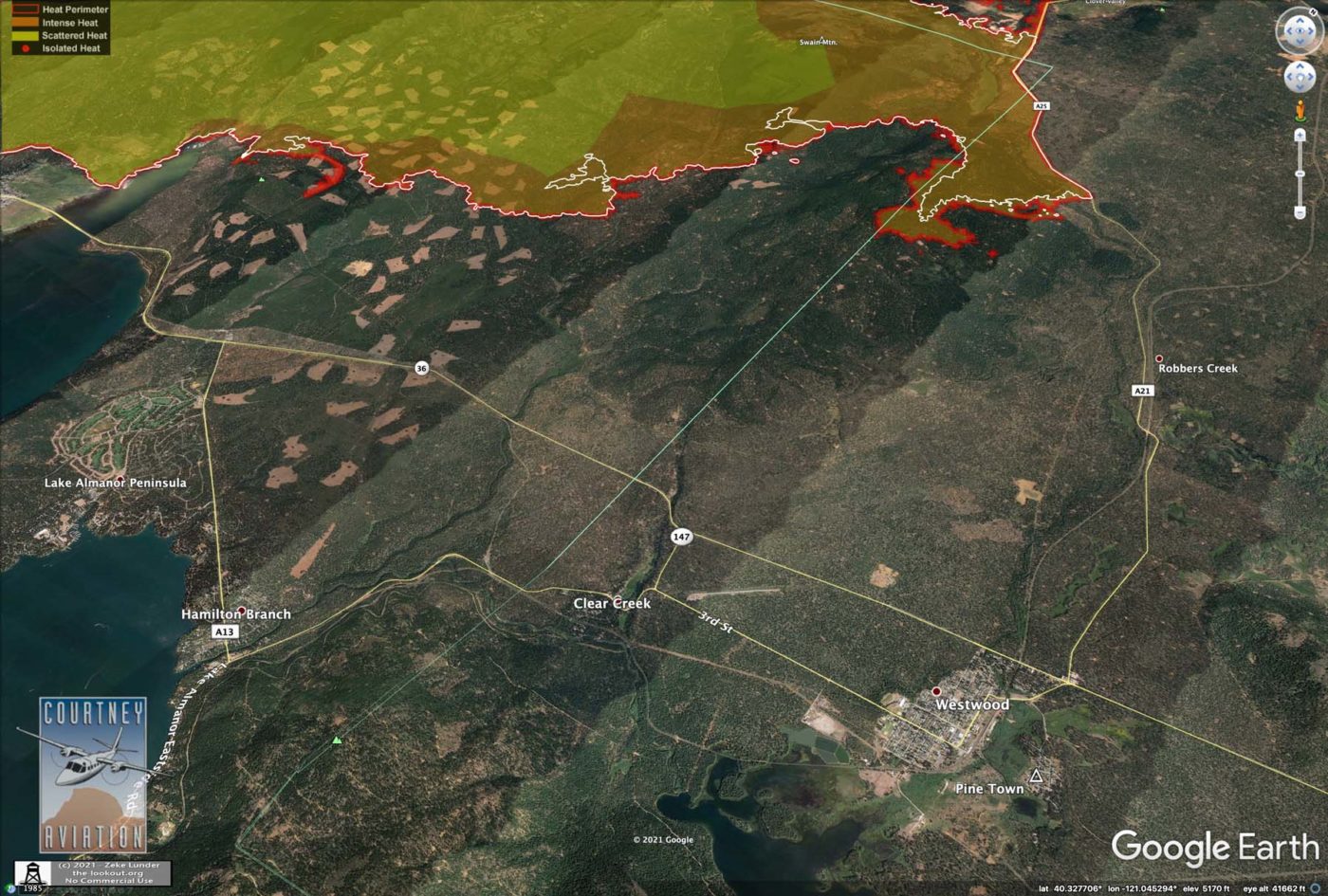 Firing operation along the 10 Road.

Not a lot of landmarks here, but this is the Rock Creek drainage, north of Clear Creek. Not a lot of growth in this area past 24 hours, but dozer lines on this flank have had some losses to spot fires in past 3 days, and it is not as flat as it looks on these images. 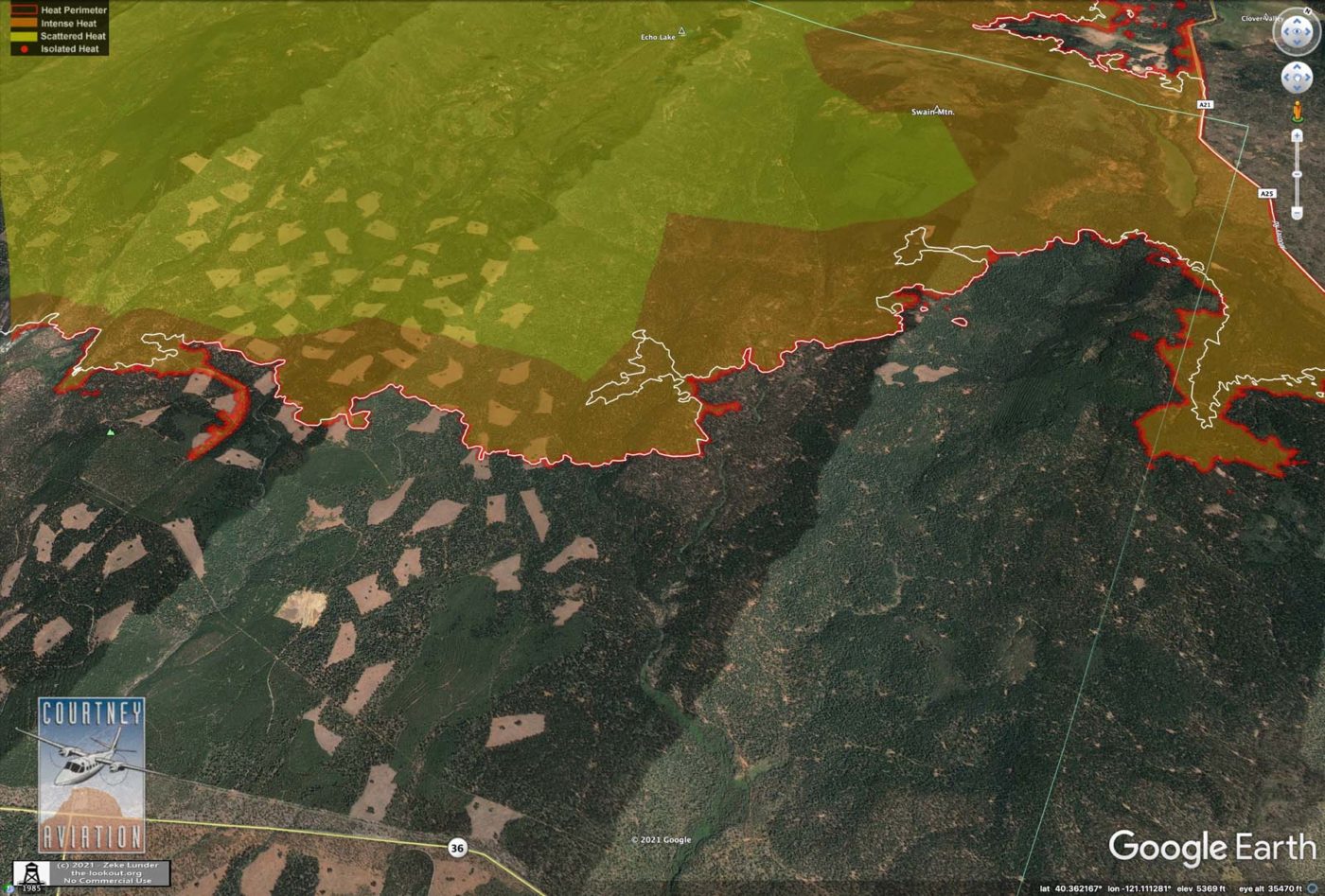 Looking west over Clover Valley and Swain Mountain, this is where the firing operations have been taking place on A-21 for past 3 or 4 days. Firefighters have been helped out by meadows along Robbers Creek and extensive fuelbreak thinning along the A-21 corridor. There are a lot of people pointing out that fuelbreak thinning has been ineffective in helping corral this fire. And in places where the fire has been running hard, it is true it has blown right thru many forests we considered to be in a fairly fire-resilient and defensible condition. However, a lot of this is just luck, and when your fire happens to lay down right before it gets to a thinned area, the thinning gives firefighters a safer environment in which to do their thing. Having a wide area without ladder fuels allowed firefighters to do underburns along this corridor without having to worry as much that small understory trees would carry their backfires up into the crowns of the larger trees. This helped reduce spotting, which has been the primary reason we have been failing to control the edges of this fire.

I love seeing firing operations unfold on IR. I have been working as a Firing Boss trainee on prescribed fires, and love the strategy, timing, and coordination that goes into a major firing operation. A lot of what hand crews do during large fires is run big, complex firing operations like this one. The basic recipe for a firing operation is to introduce fire along a good break in the fuel (anything from a handline to a road or dozer line), ideally with the wind blowing the fire away from the fireline, and to slowly add depth to the fired area until there is enough ‘black’ on the ground to stop the advance of the main fire.

How does this all get coordinated on the ground? Hotshot and Type II IA crews have to have enough qualified crewmembers to be able to split into 4 modules or squads, each with competent supervision (a squad boss). This allows for a lot of flexibility in deploying the 20 people on the crew. During firing operations, the crew splits into firing and holding resources. Each module of 5 has an experienced firefighter (squad boss) looking out for the well-being of their 4 underlings, and the crew boss only has to communicate with the 4 squad bosses and the overhead they are working for. This ‘span of control’ is a core tenant of how we manage fires. Nobody on the fire should have more than about 5 people they have to keep direct tabs on. This is why we have Squad Bosses working for Crew Bosses who report to Strike Team Leaders reporting to a Division Supervisor who works for a Branch Director who works for the Operations Section Chief who reports to the IC. 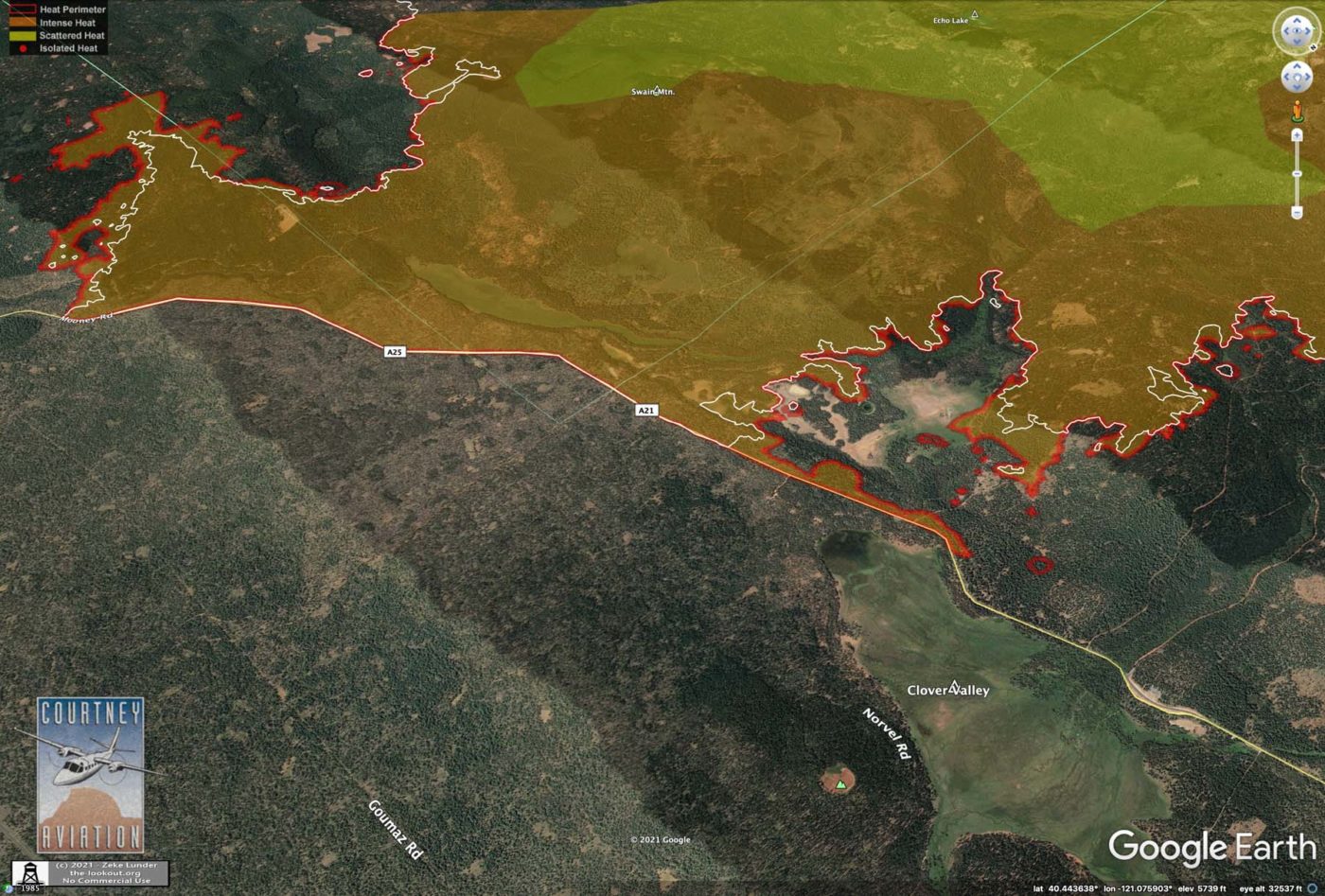 Thinned forests along County Road A-21. 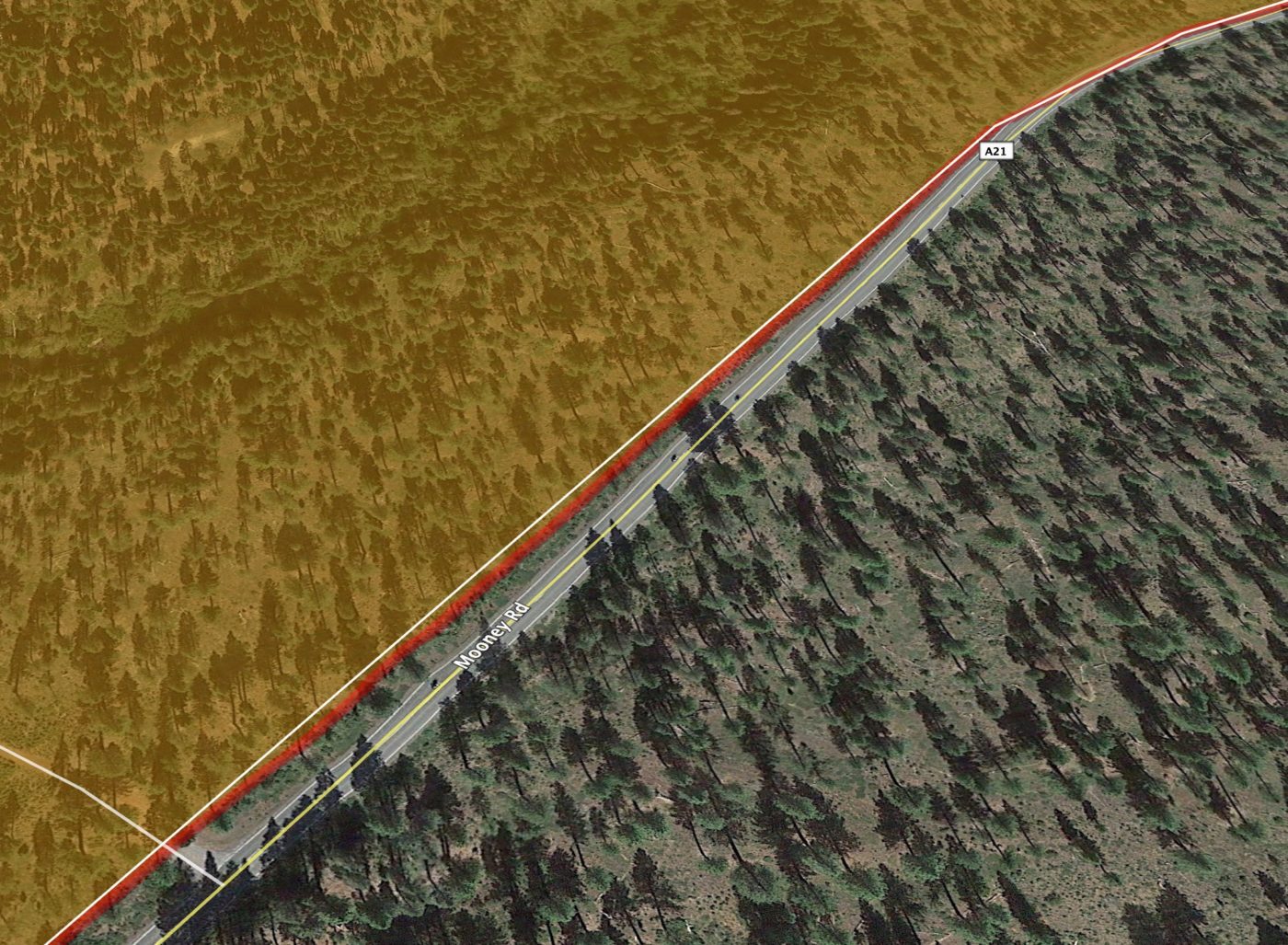 Hotshot crews, and Federal firefighters in general (wildland firefighters are officially classified as ‘Forestry Technicians’), are underpaid and treated very poorly. There is a movement afoot called ‘Grasssroots Wildland Firefighters’ that is fighting to get them better pay, better benefits, decent mental health care (wildland firefigher suicide is a major problem), and better treatment in general. 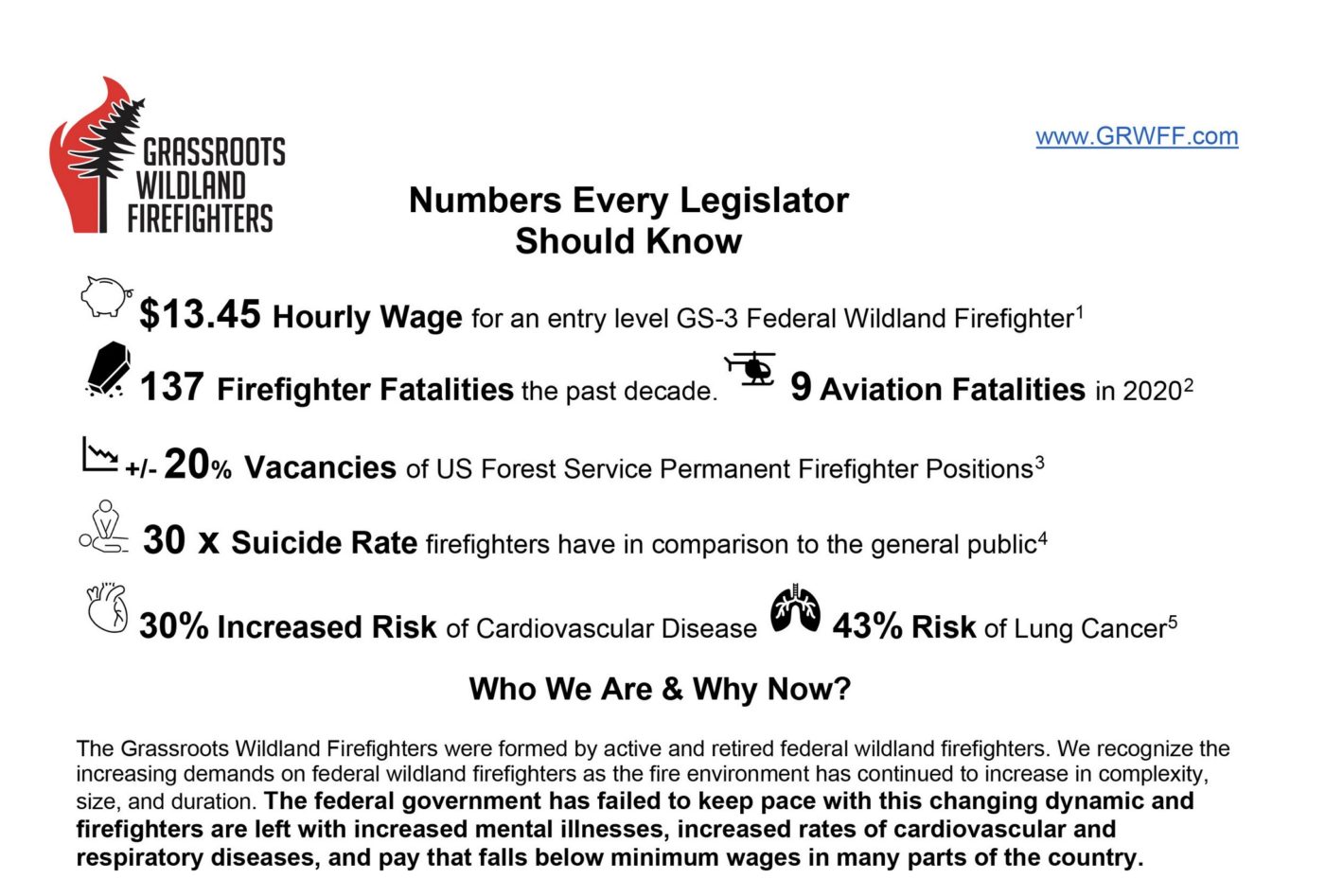 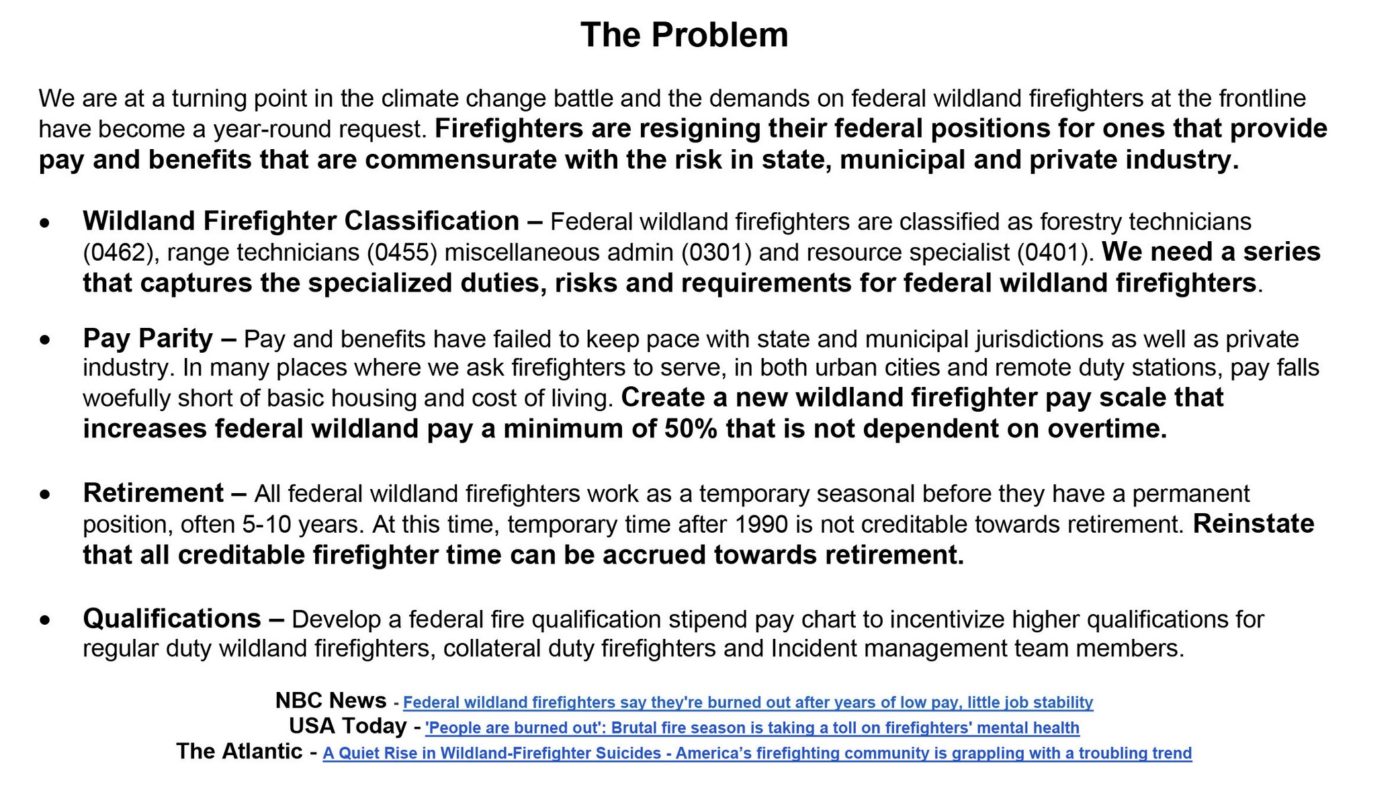 Here is a video about firefighting from the perspective of a Hotshot.

If these posts are helping you out, consider donating to The Lookout. We are still working out what the website will be, but donations will help me work less on other projects, giving me time to create content and stories to help us move forward through this disaster.