Well, we continue to grind this one out. On this topic, it is worth mentioning that many of our worst wildfire disasters and accidents have happened during transitions between management teams. The east zone will be transitioning to a new Federal Type I Incident Management Team this afternoon. Often, a lot of knowledge about what is going on is lost in the shuffle, and after 14 days, many of the outgoing overhead aren’t in the best shape to transfer all of the information and lessons they have learned.

Forecasts
The weather forecast is not great for tomorrow and Tuesday.
I get 7-day weather outlooks from Predictive Services, at North Ops, in Redding: Below is today’s. 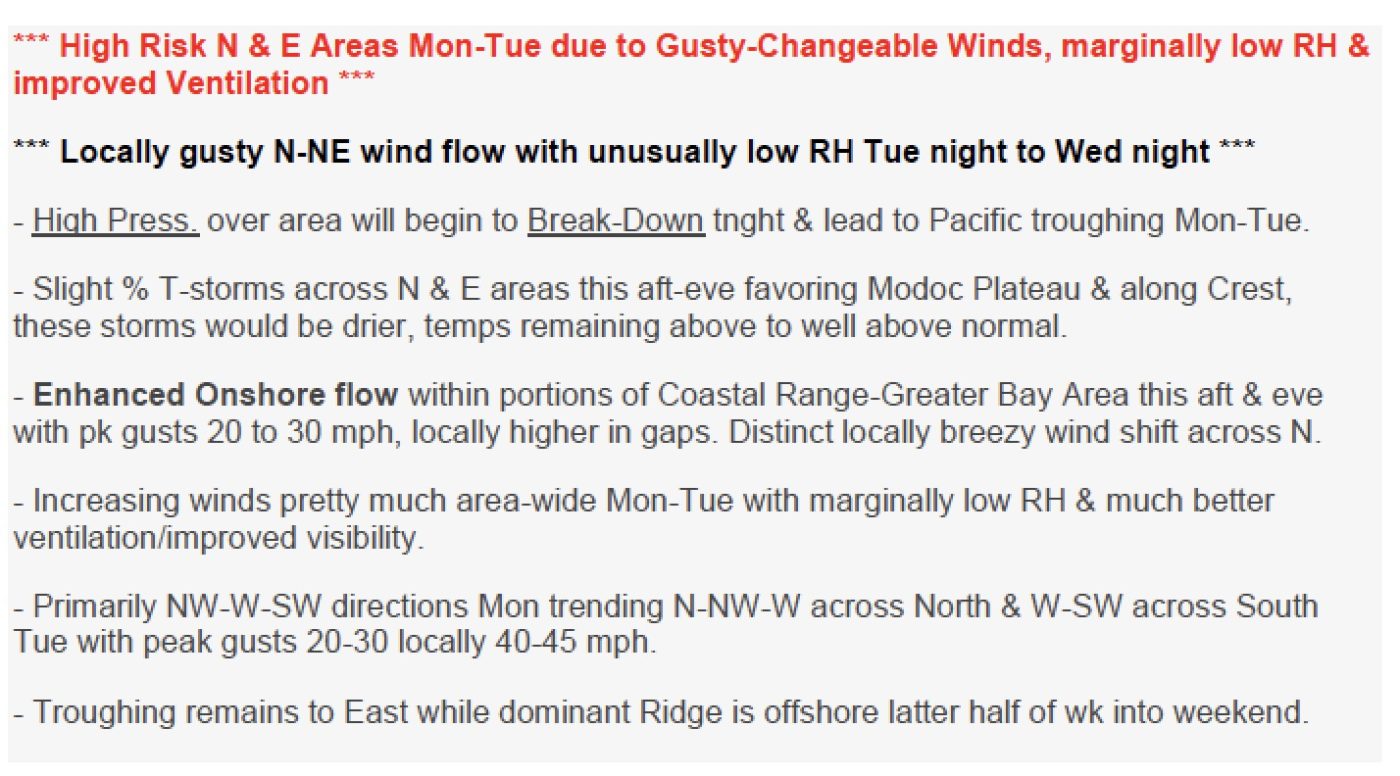 Gusty winds are forecast for Monday and Tuesday afternoons. The direction and strength of these winds is especially dangerous for Susanville if the Dixie Fire outflanks the 2020 Sheep Fire in the Willard Creek area. 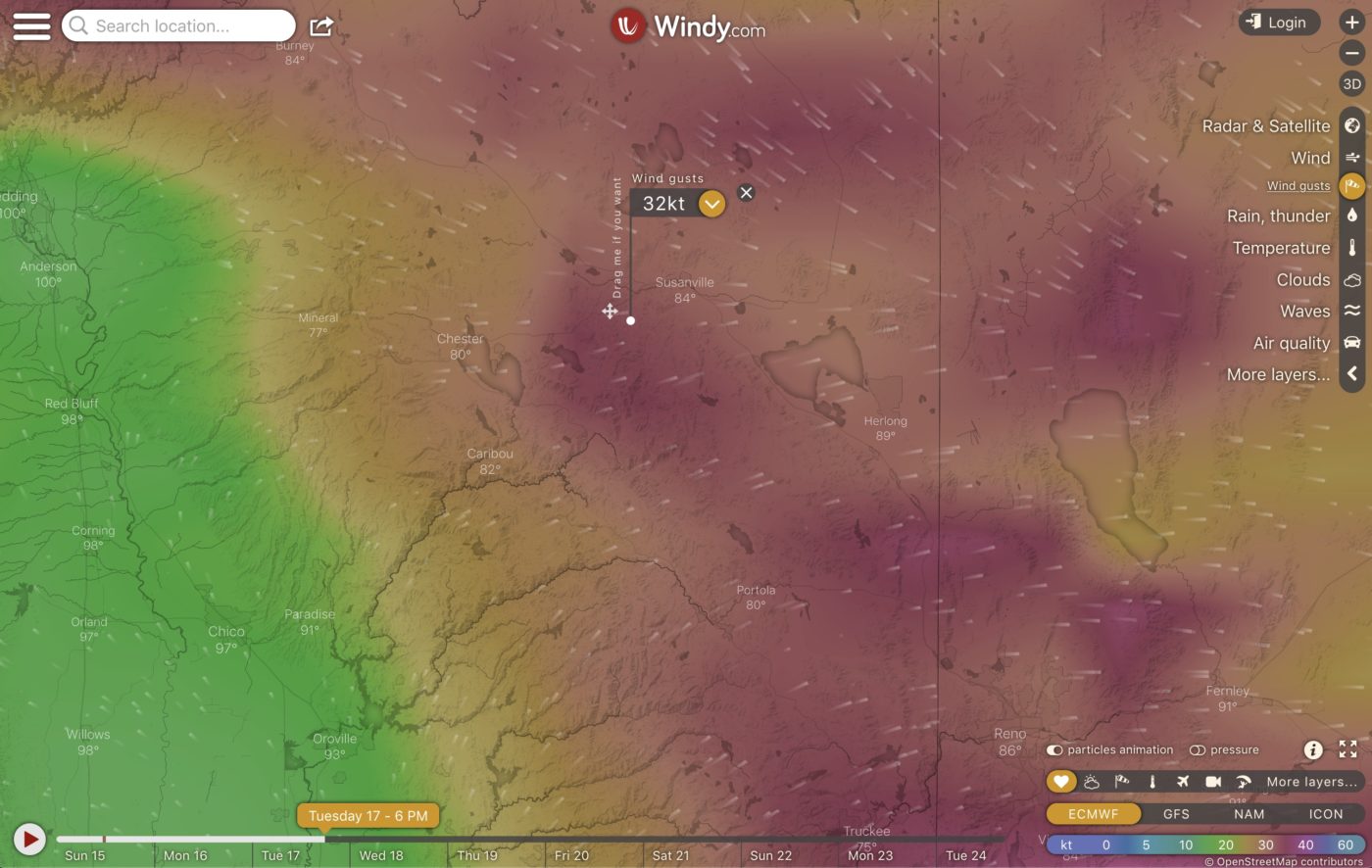 Current Situation
Here is what I am seeing on last night’s Dixie Fire IR maps. These images are from 10:30 pm last night, and only 4 hours fresher than the ones in my last post, but they show a couple things that happened late in the day yesterday that seem worth sharing.

By 10:30 pm, the pyrocumulus cloud over the east end of the fire had calmed down enough for the IR plane to get in there. The fire spread as much as 2 miles yesterday. White line shows 16 hours growth. The SE flank of the fire ran into the 2019 Walker Fire and spread about 1/3 of a mile into the 2 year-old burn. The spread wasn’t really toward Janesville, and fire is still 9 miles away from there. 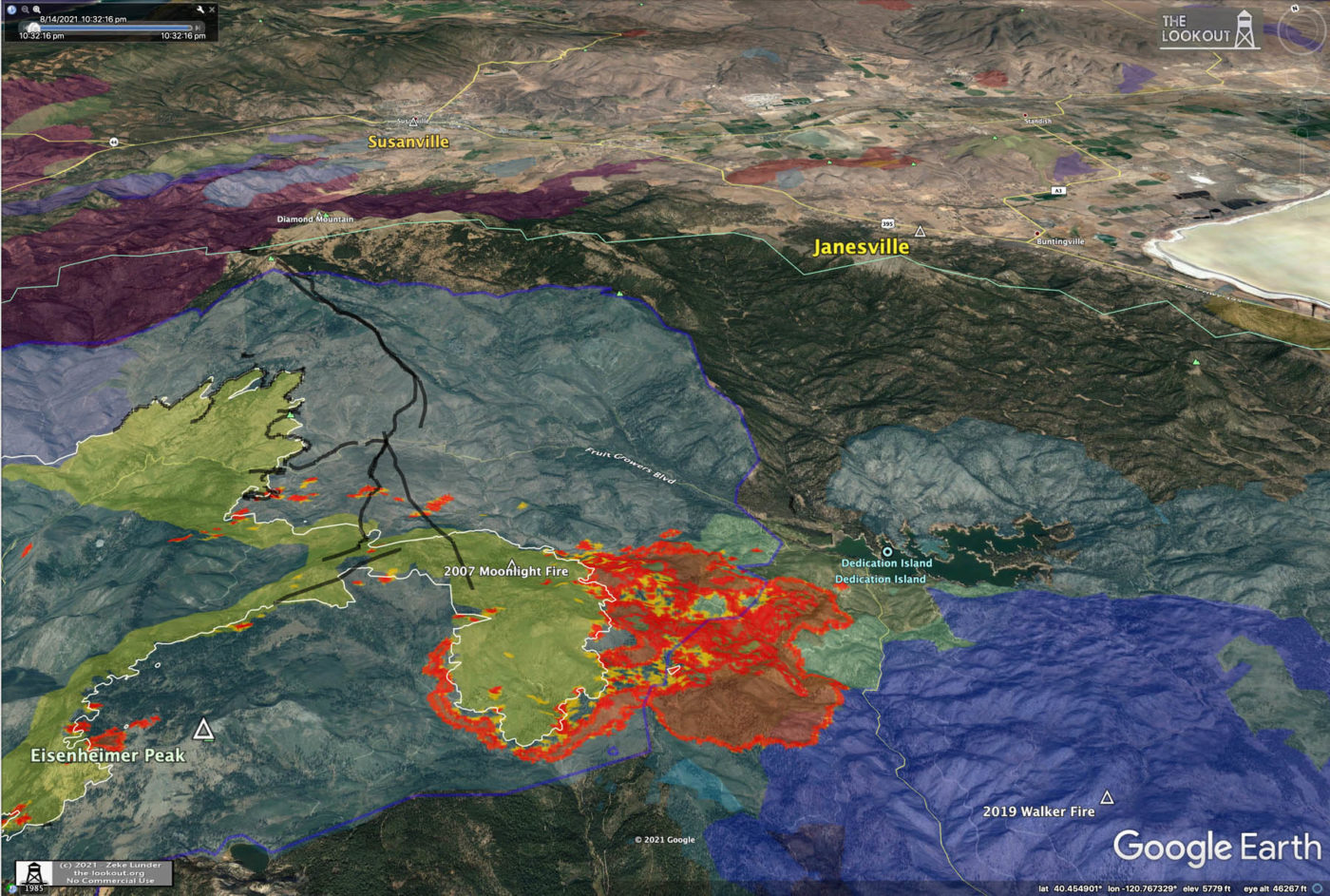 The fire made a run up Peters Creek canyon. Not the explosive run I was expecting, but there will be big runs out of here once the fire gets to the bottom of the slope and runs the north-facing slope. In firefighting, when a fire backs down to the bottom of a drainage and runs up the other side, we call this a ‘slope-reversal’. Not much heat showing up on the southern tip of Keddie Ridge now, and danger seems to be waning for places on Diamond Mountain Road that have made it this far. 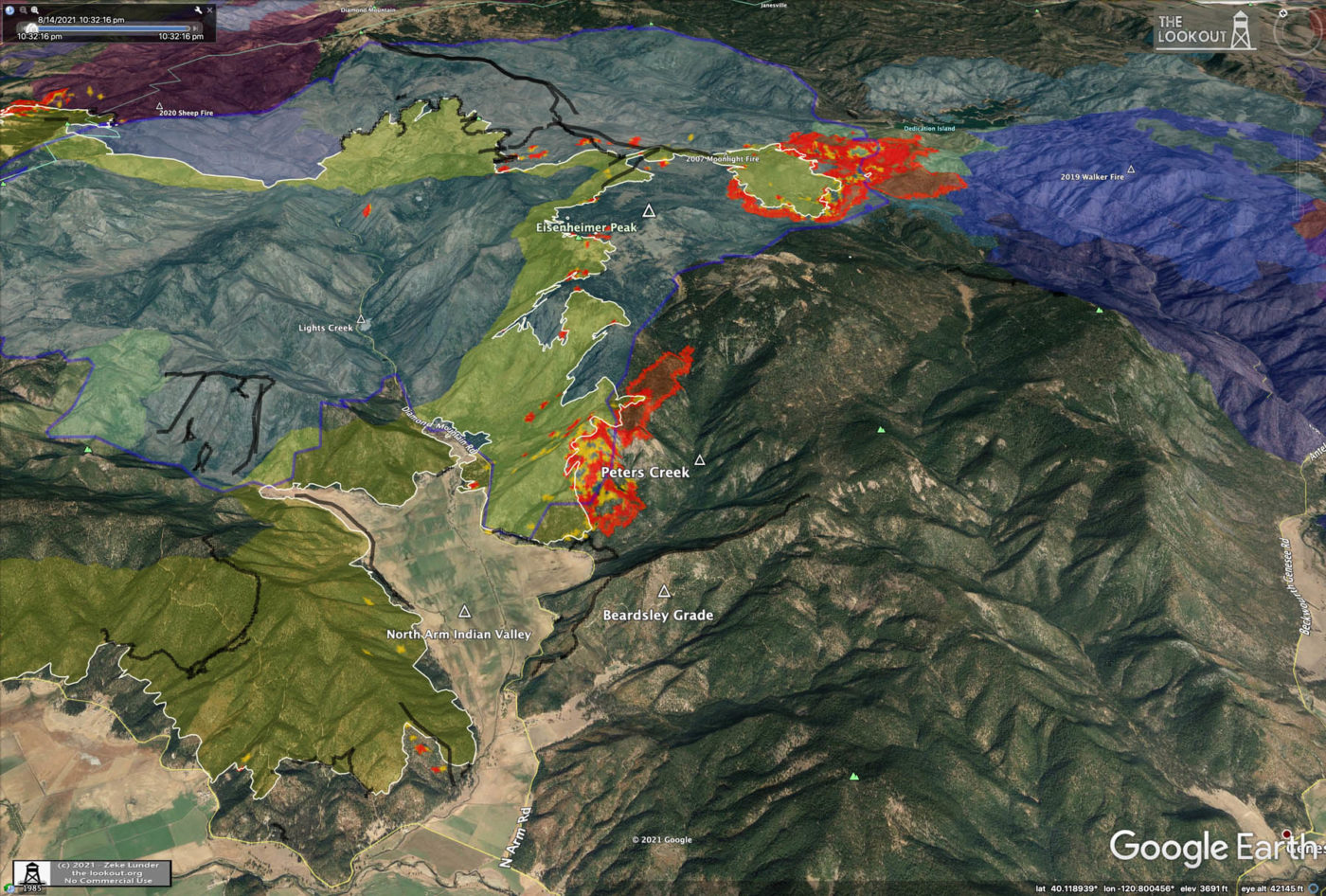 Fire continues to back on north side of Keddie Ridge, with a bit of a sideslope run last evening. It sounded like there may be some firing operations occurring in this areas last night, but I don’t see anything on this image, so maybe they started later? 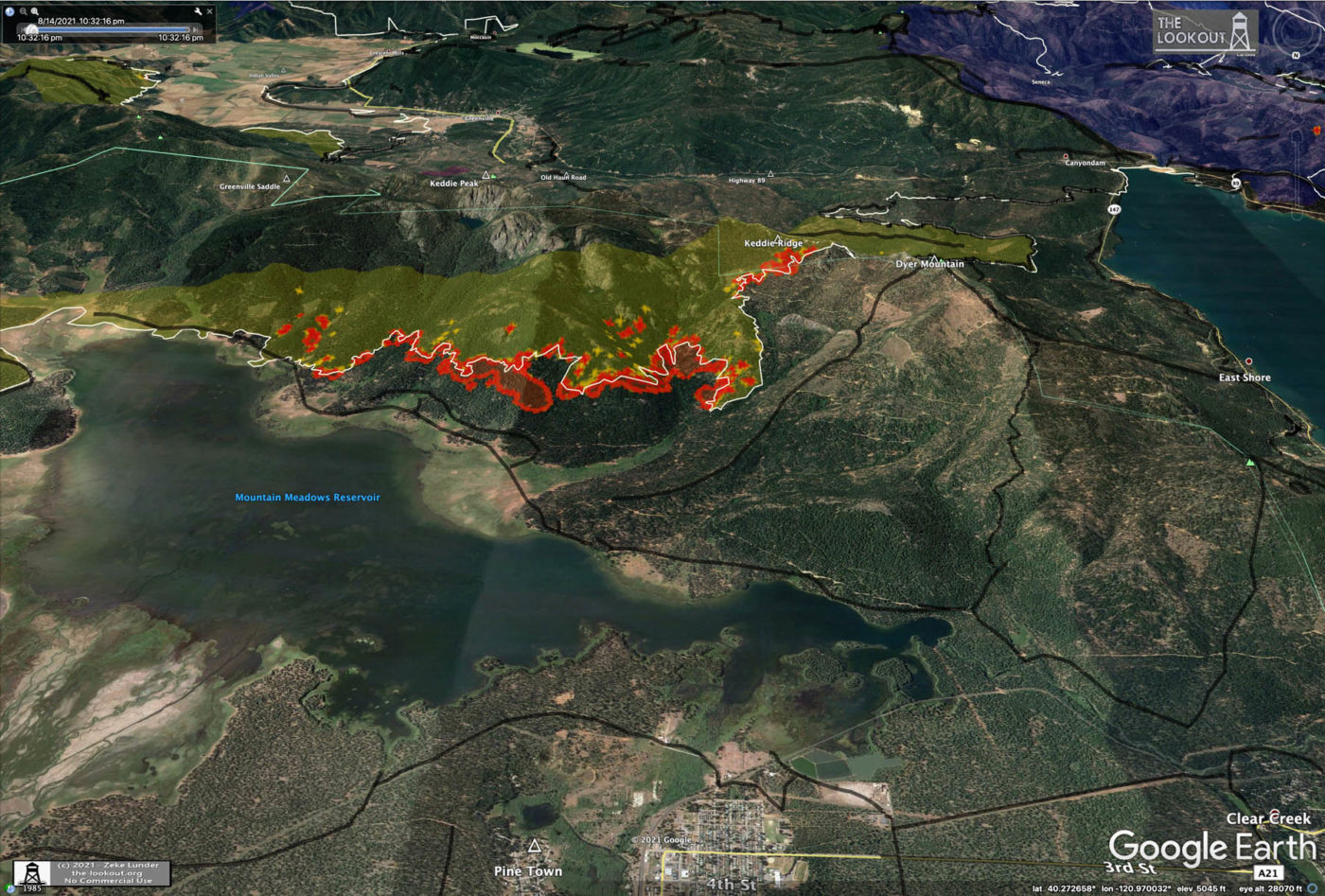 Looking north over Clear Creek. Man, there is a lot of heat here and our communities remain very exposed to forecast upcoming north winds. Given the long-range spotting distances we have been experiencing, it is going to take a very long time to secure the area north of Highway 36.

We are not out of the woods yet, but past forest management buys some advantages for the towns here. Just SW of Westwood you can see a big barren area on the aerial photo. This is the old Ultrapower site – where a co-generation power plant operated for about 25 years. This plant generated electricity from wood chips, and it had a real appetite. This resulted in a huge amount of thinning in the woods. 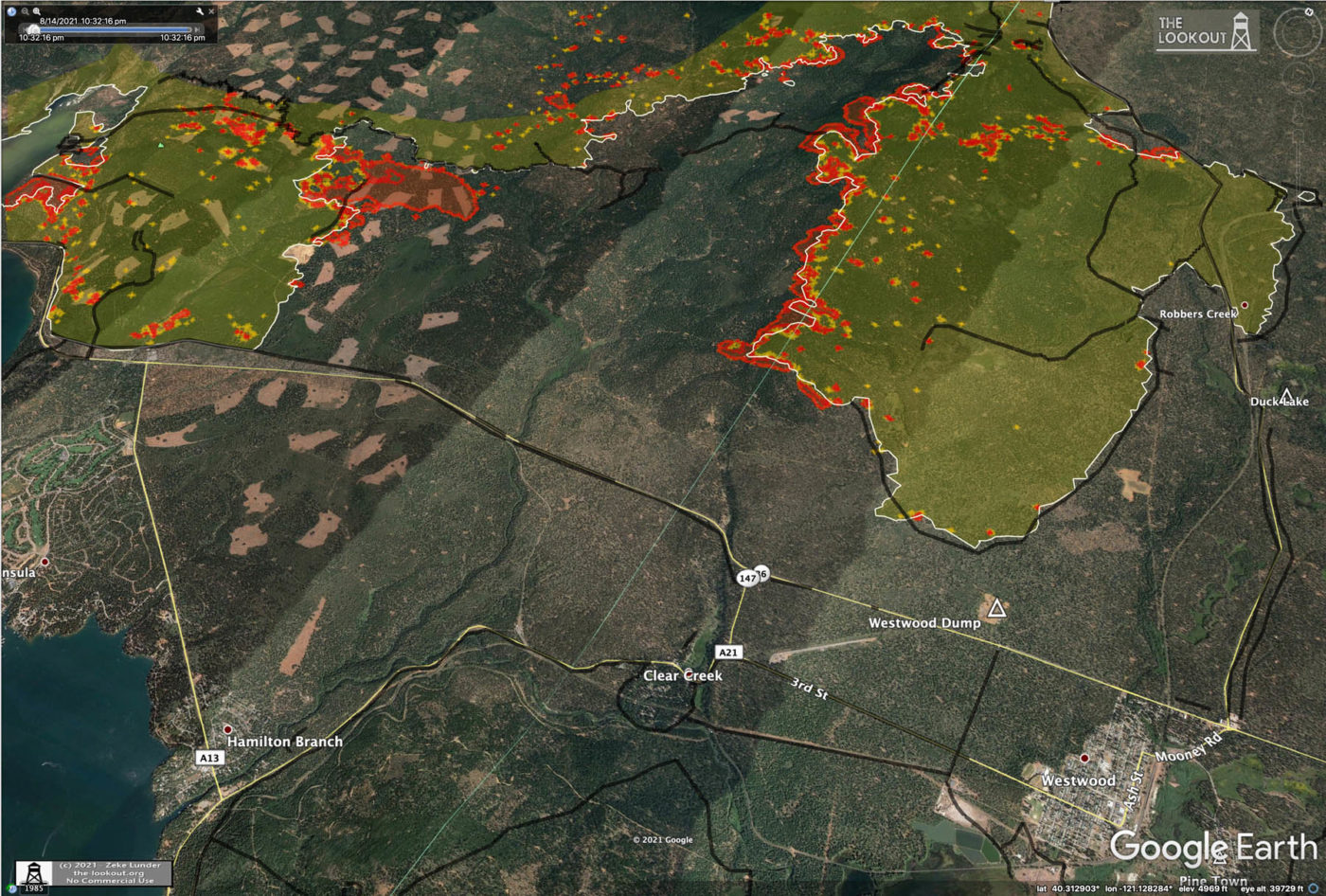 A large co-generation power plant in Westwood provided a market for wood chips from the mid 1980s until the early 2000s. Clean-energy subsidies during this time period made it economical to thin the forests out to a radius of about 50 miles from the plant, and the plant burned up to 270 tons of biomass a day. Having a biomass plant in the region resulted in lasting wildfire resiliency benefits – most of the private lands in the flatter areas around Westwood have maintained canopy closure levels which have kept the relative hazard of major crown fires low. Since the closure of the Westwood biomass plant, private landowners in the region have continued to use mechanical thinning to remove understory biomass from the flatter areas of the forests, but the pace of these operations has declined without the subsidies in place. (Excerpt from South Lassen Wildfire Assessment, Deer Creek Resources, 2021).

The map below shows areas that have a forest canopy closure of less than 50%. Many of these areas have been thinned in past 30 years. Some areas are meadows with no trees. 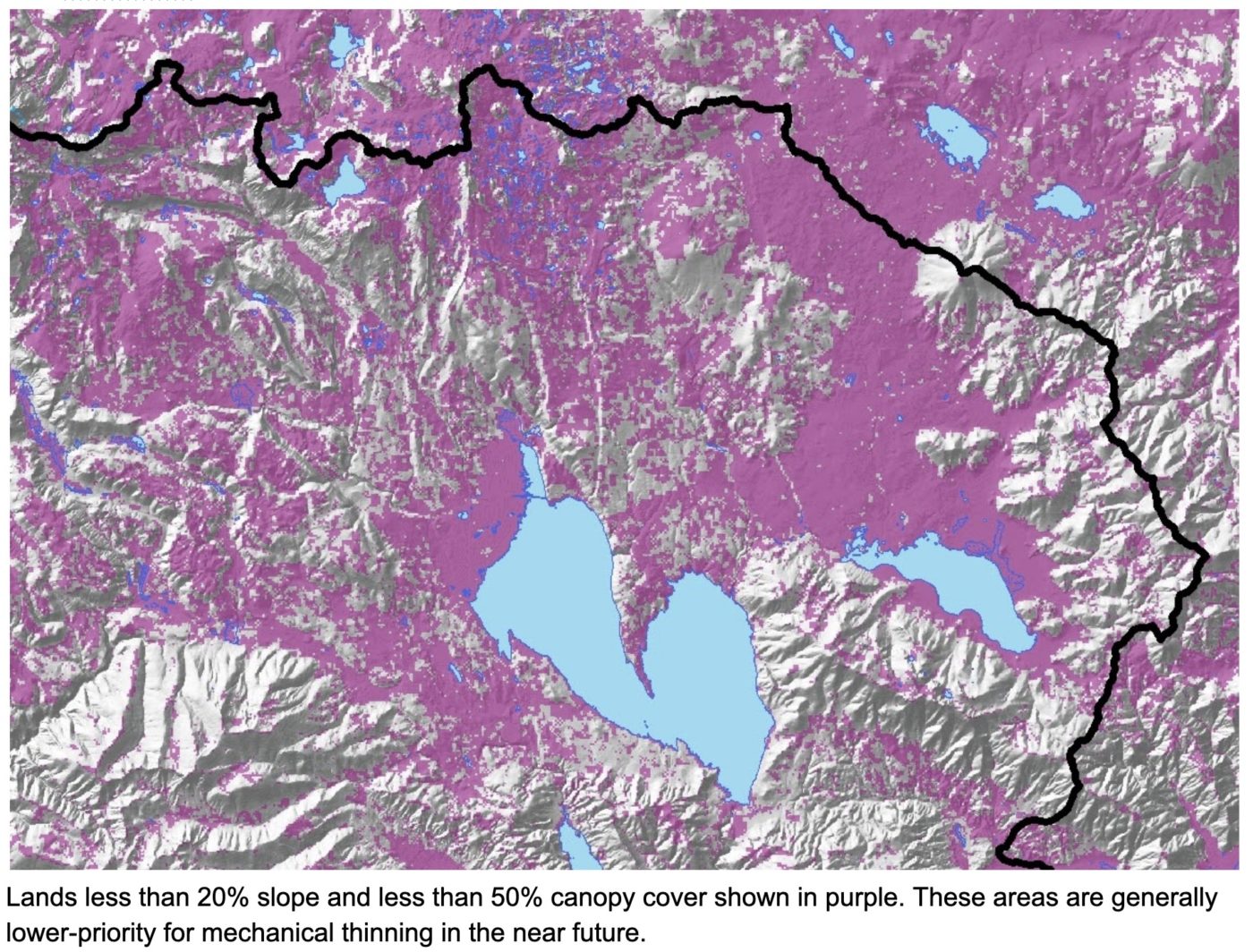 Much of the area directly adjacent to Clear Creek and Westwood has well-spaced, larger trees. Mechanical thinning harvests the whole tree, so much less slash is left in the woods. Since it has been awhile since much of the thinning took place, there are areas with lots of christmas tree-sized white fir. These contribute to spotting when they help the fire torch up from the ground into the crowns of the larger trees. 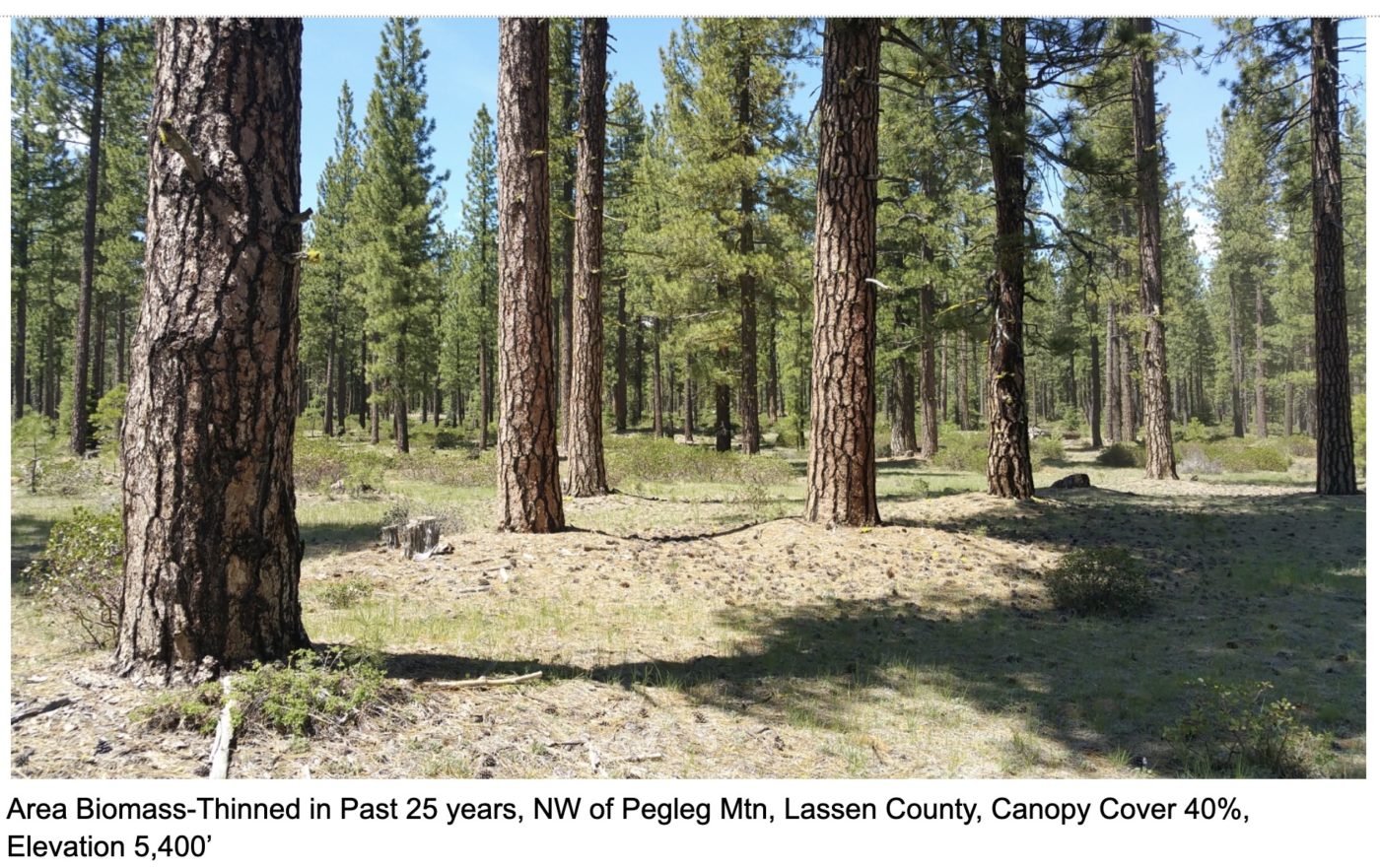 These historic thinning projects haven’t stopped the fire from making major runs when the winds area blowing, but they are helping give firefighters a chance. As I have mentioned before, large fires on the east side of the Sierra and Cascades are driven largely by spotting, and the less ladder fuels you have, the less chance the fire has to torch up into the canopy and rain embers across your line. Much of the country we are talking about is prime for prescribed fire. When we run low-intensity fire through these stands, we kill many of the christmas tree-sized fir and raise the bottom of the branches (canopy base height) up off the ground. Done right, prescribed fire can leave you with a forest that looks like it was grazed by giraffe-beavers, like the photo, above. This lowers the risk of torching, decreases spotting during fires, and makes fires more controllable, even under severe weather conditions.

Did you know the founders of Westwood, the Red River Lumber Company (Minnesotans who moved west as the Upper Midwest started to run out of trees to cut) were major proponents of using fire? 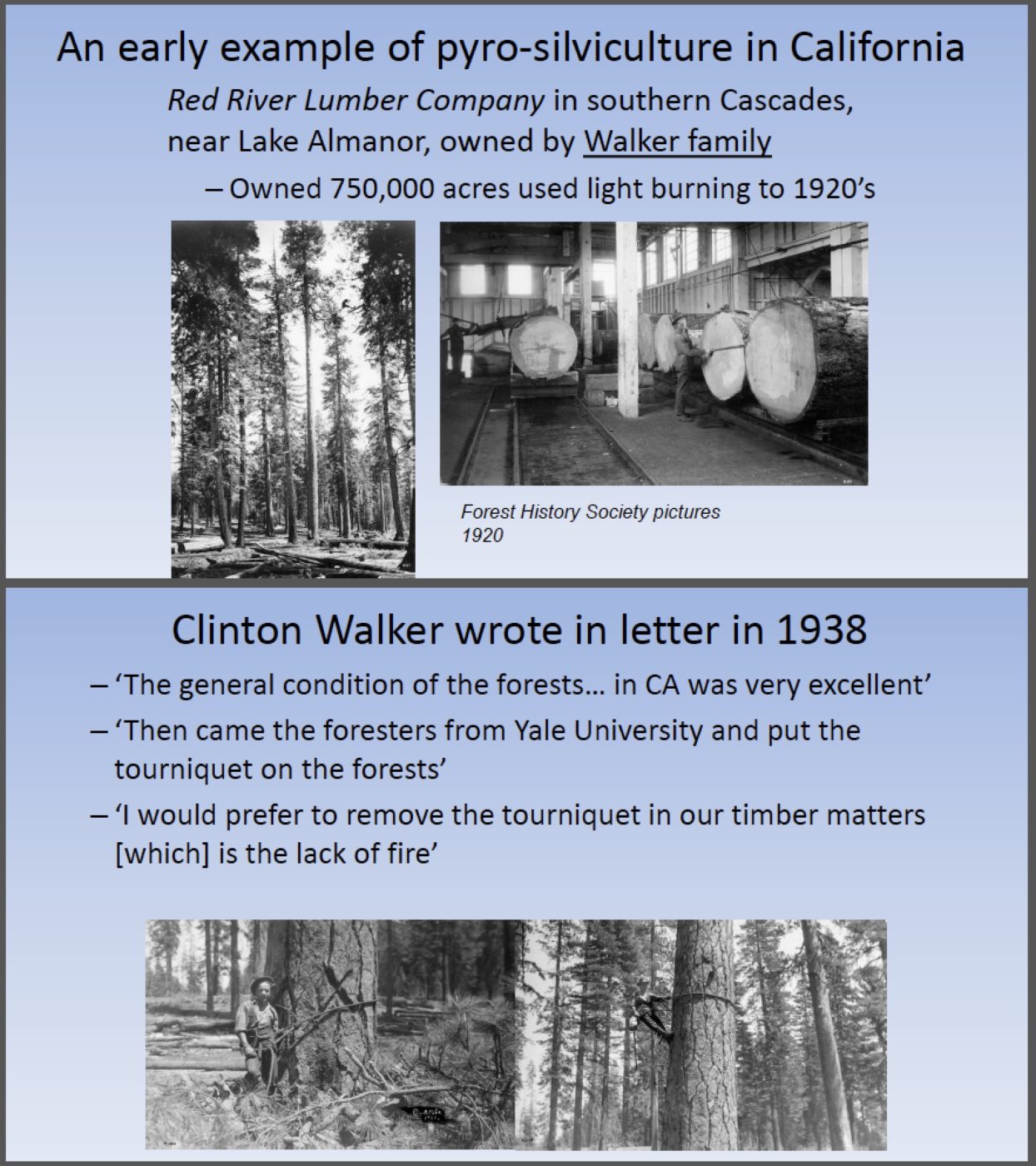 And other Walker family members advocated for an onging prescribed fire program on RRLC lands as early as the 1930s. 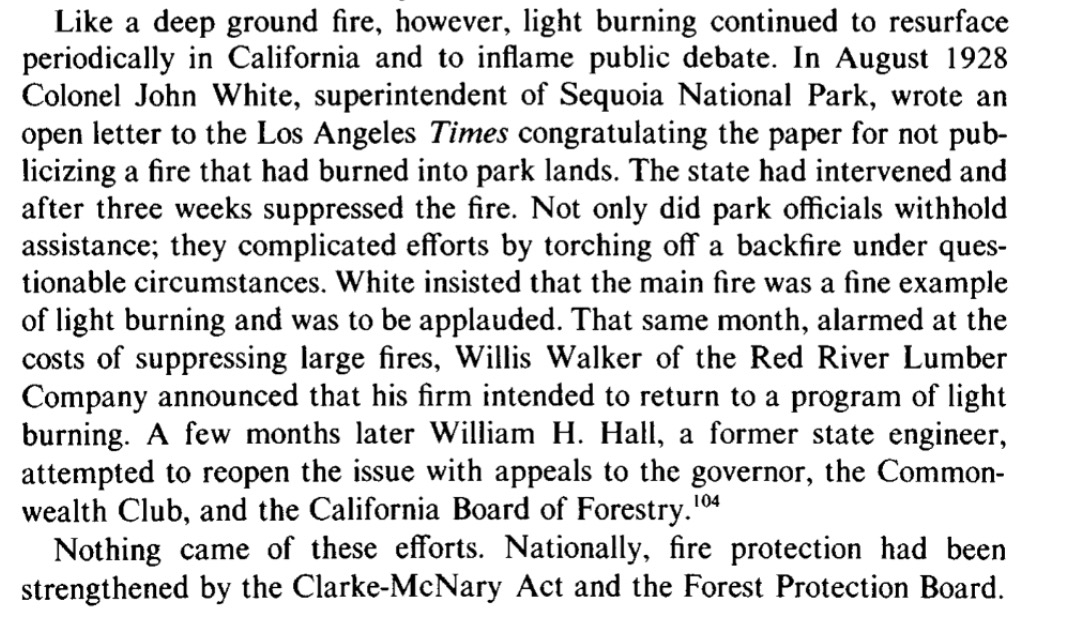 The Walker Family still owns and manages many of the timberlands around Westwood.

If we can hold this fire outside of Westwood and Clear Creek, there will be excellent opportunities to use prescribed fire on the private timberlands adjacent to these communities in the very near future without a major risk of the burns escaping to the north, south, or west. Wildfire creates opportunities such as this, and we need to be bold and seize them when they occur. Low-intensity underburns around our communities will buy them some breathing room and safety the next time a major fires like this burns, and getting fire on the ground is the only way we will have sustainable timber operations in a warming climate.

OK, back to Dixie. The fire continues to spread steadily across Lassen Park, toward the 2012 Reading Fire. Silver Lake was still fine last night. 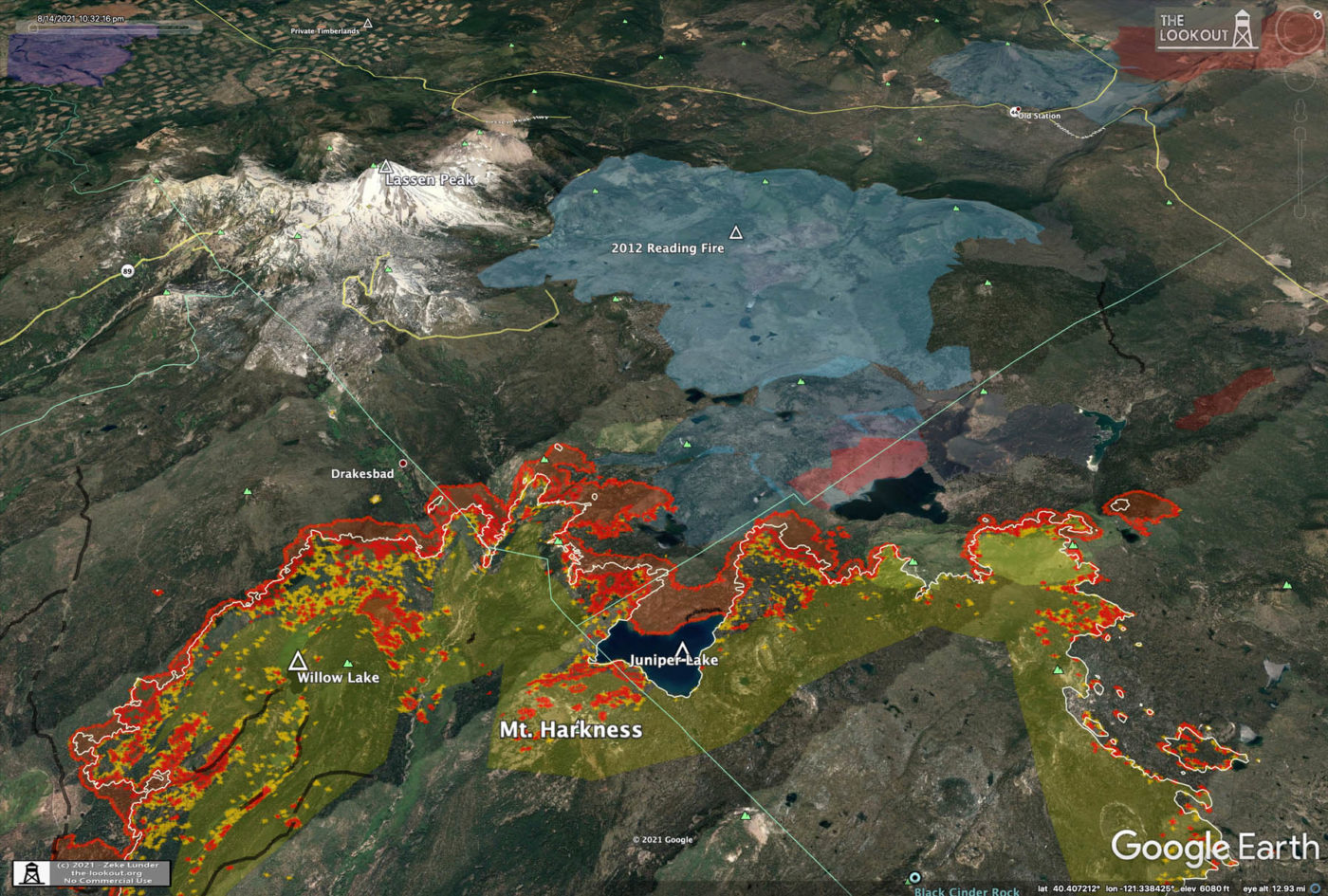 Lest we forget about Carter Creek, the fire still hasn’t burned up and out of there. 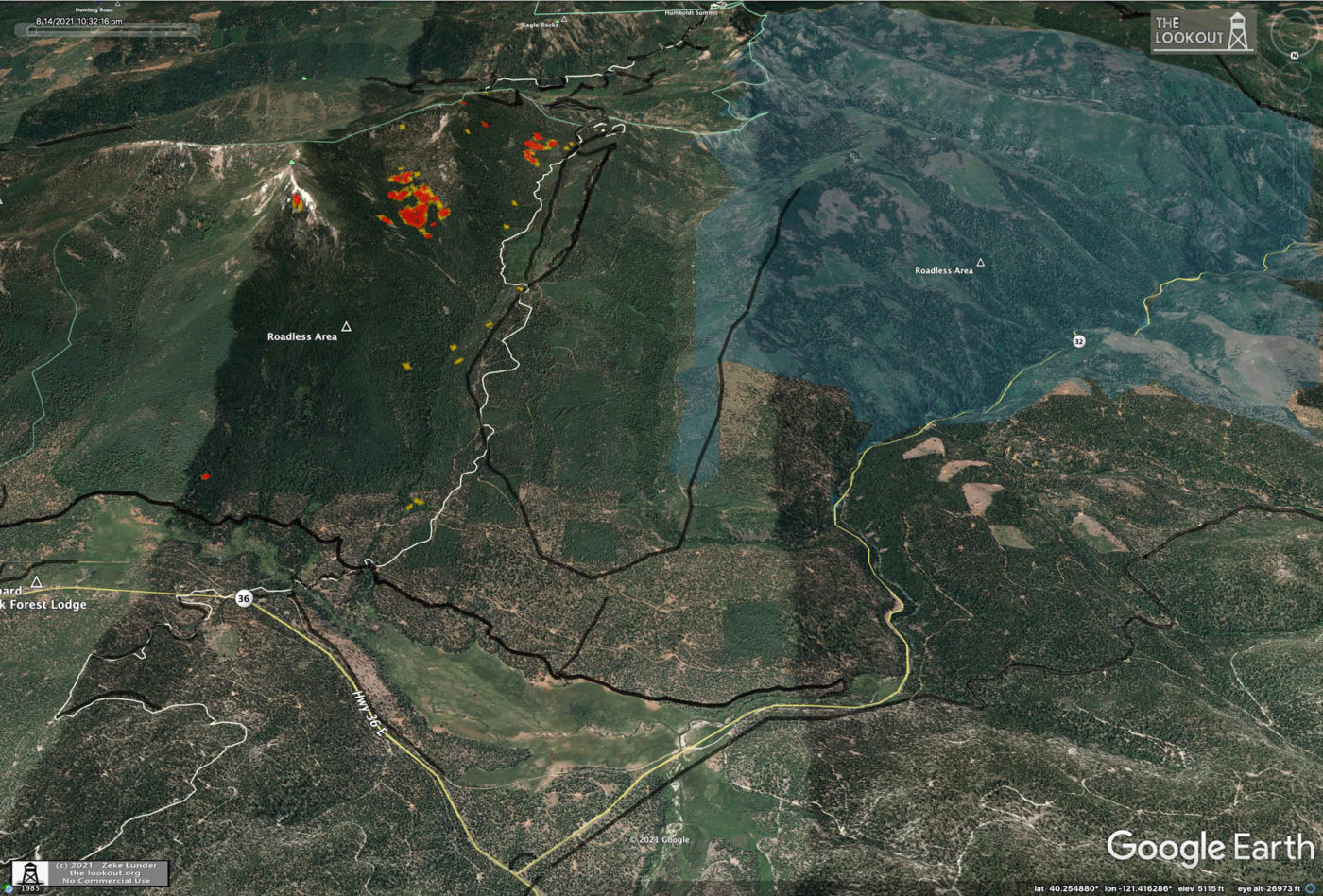 Somewhat concerned about the continued, slow and steady march of the fire on east side of Coyote Peak down through the clearcuts toward Willard Hill and Roxie Peconom Campground. The fire has flanked 3 miles to the north along the 2020 Sheep Fire in past week, and last night it was burning into the 2020 fire scar. There is a long history of fires making hard runs from this area toward Susanville, as you can see in the fire history overlays, a few images down. White line is 16 hours of fire spread. 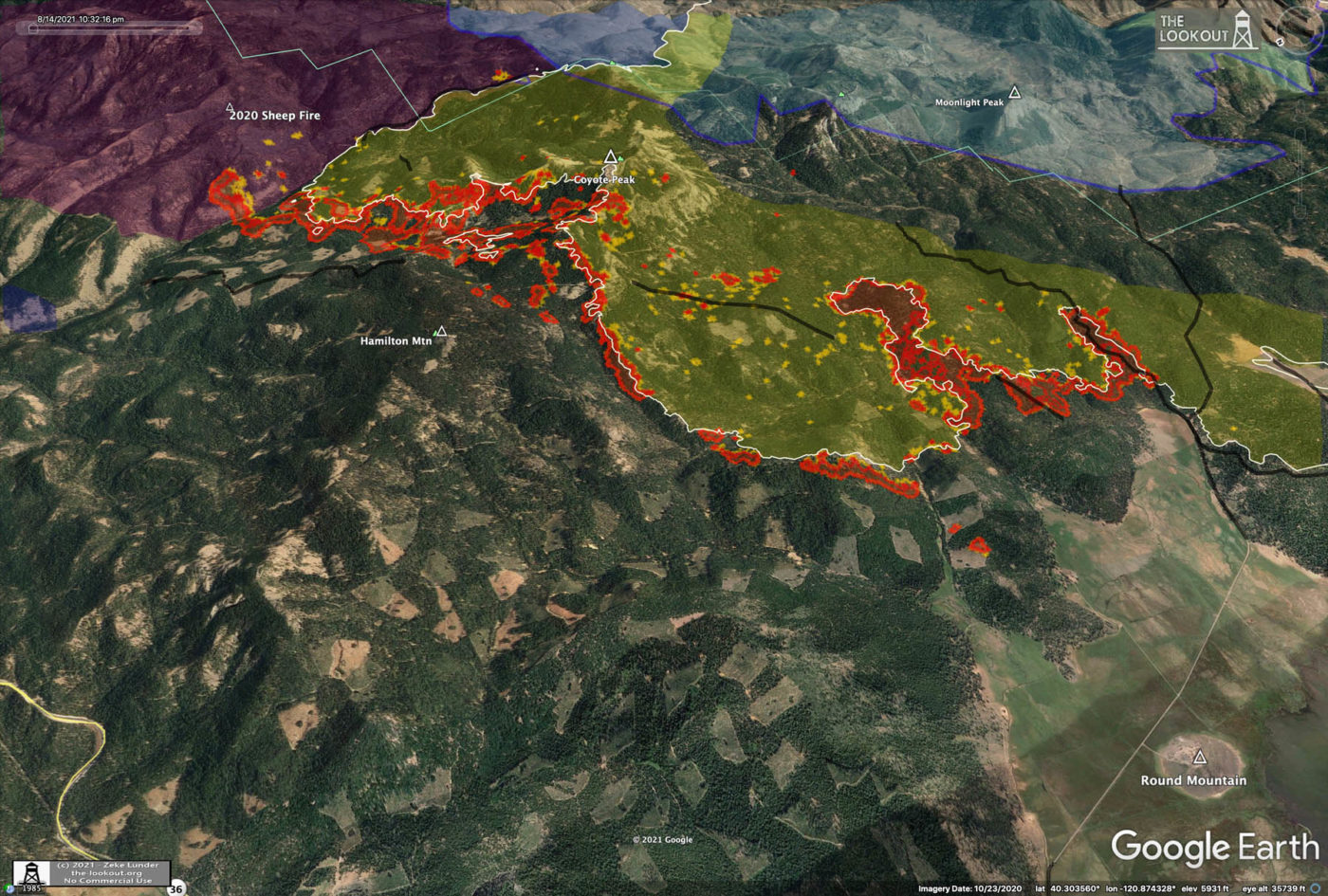 Fire is burning in to the 2020 Sheep Fire footprint. 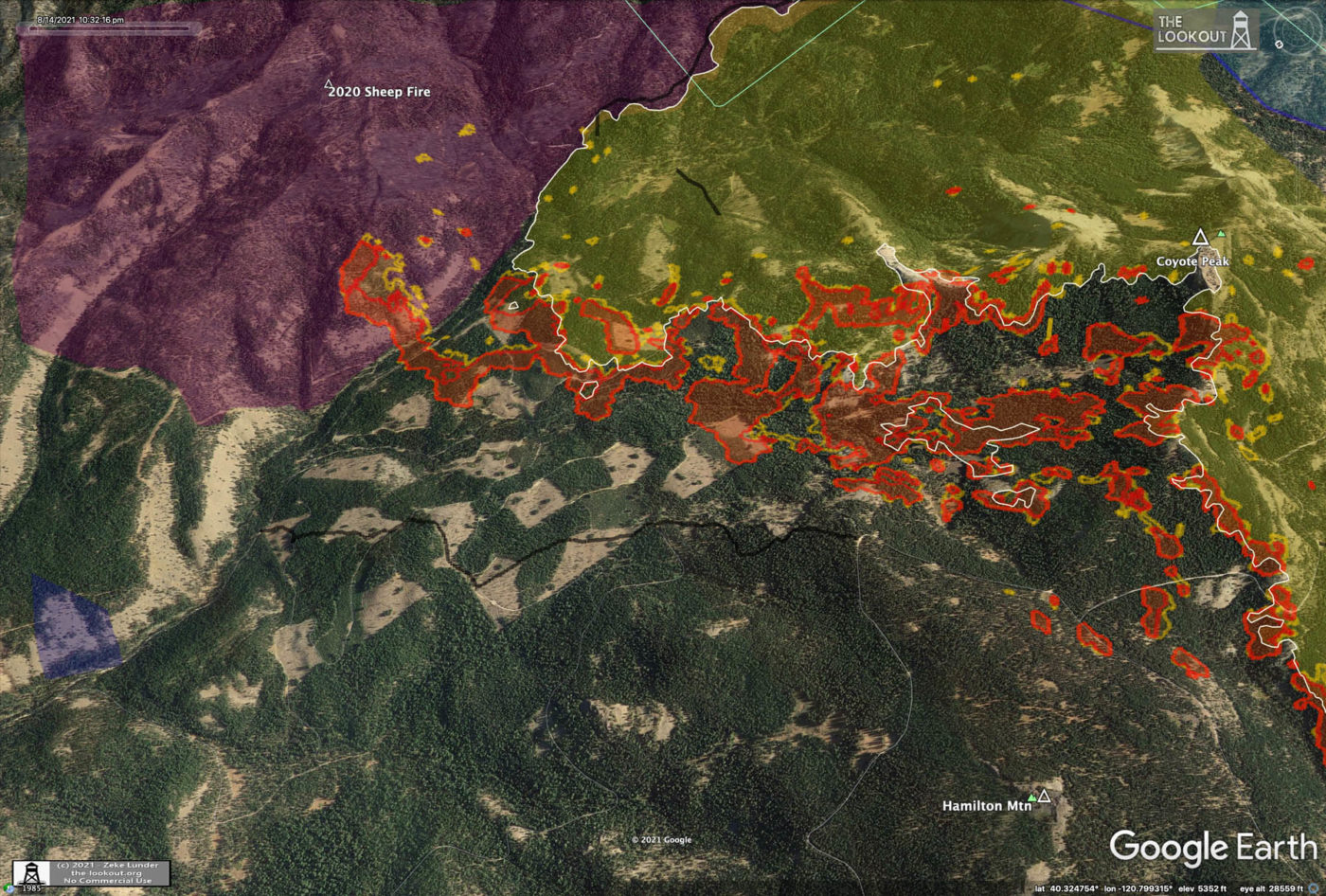 Fire history in the Willard Creek/Devils Corral area goes something like this: Fire starts on a grassy, west-facing slope (someone shooting a gun on a hot afternoon, or other accident). The fire hauls ass up the grassy, sun-baked slope in stiff afternoon breeze, spots to the next ridge, and then the next, and pretty soon it is in Susanville. 1999 Devil Fire in green, 2018 Roxie Fire is dark blue in foreground, 2016 Willard is dark blue in middle. If firefighters are waiting for this fire to back out to their dozer line (black, lower-center), the Dixie Fire will be clear of the 2020 Sheep, and spot onto the grassy west-facing slopes to the east before it gets to their dozer line. 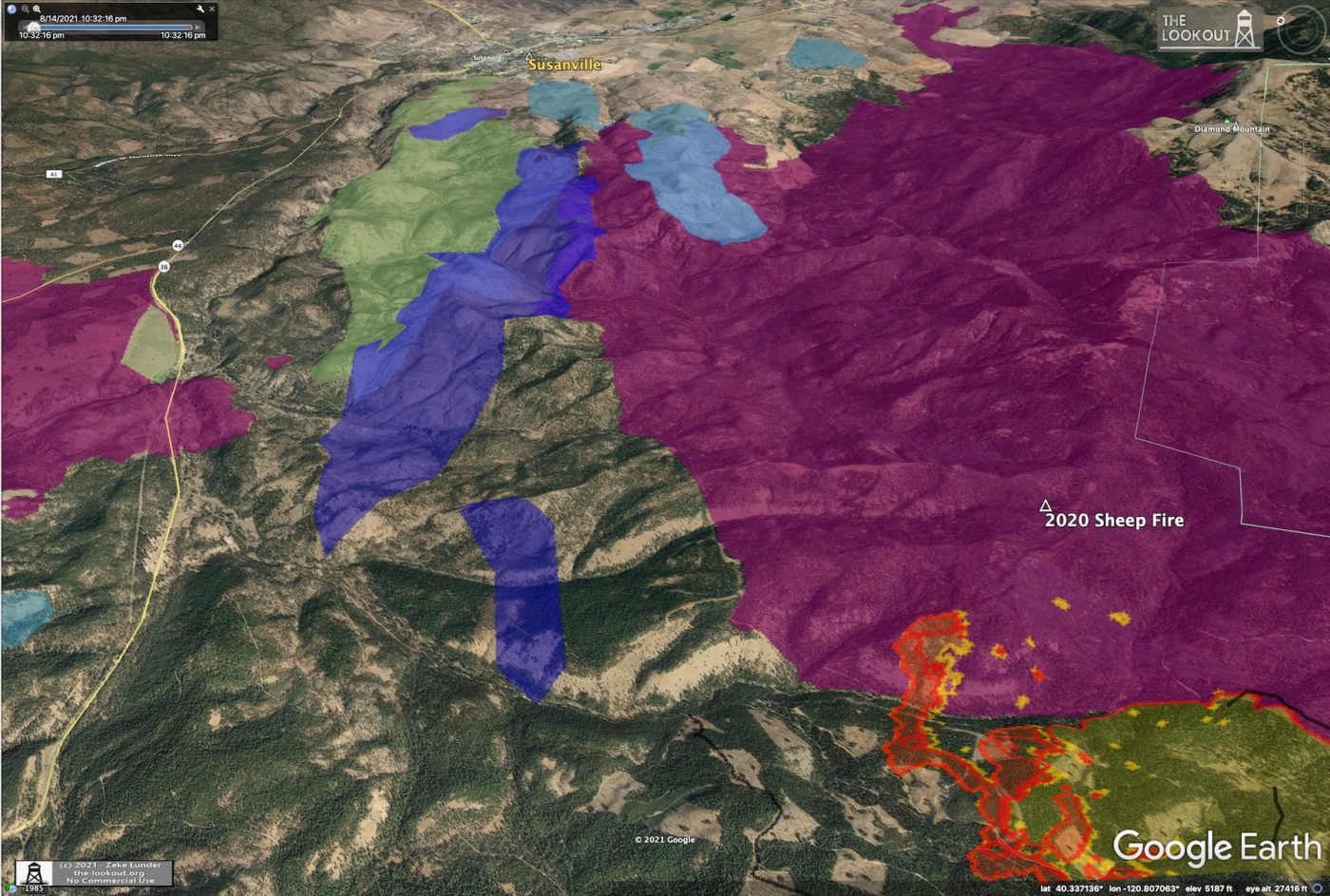 Well, that’s enough for now. Thanks for your support, and best of luck to everyone.