The big news this evening is explosive growth of new lightning fires on Morgan Summit, on Highway 36 west of Dixie. These have escaped initial attack and are now growing rapidly. With the forecast winds for next two afternoons, there is a strong possibility they will merge with Dixie in next few days. One effect the new fires may have on the fires already burning in Chester and Westwood area is to shade out the existing fires with their heavy smoke. This could help moderate burning conditions during what will likely otherwise be hot, dry, and gusty conditions.

If forecast NE winds show up later in week, the new fires may move SW down Mill Creek into the Turner Mountain Area and potentially into the frontcountry/Antelope Creek later in week.

Photos of #MorganFire from this afternoon 8/15/2021 forwarded by Billie Roney, taken in Childs Meadows.

For the rest of the fire, here is an afternoon update, with a couple IR maps from 2:45 pm.

One of the biggest new developments today is a firing operation along Highway 36 between Hwy 147 and Rock Creek. Not sure what time they lit it. The area directly east of Rock Creek (left side of the firing on the map) has had a lot of thinning done in past 20 years. It is about as open and cleaned up as anywhere in the entire region, and fairly flat. Right at the Highway 36 icon is the Clear Creek Escarpment. This is also called Deadman’s Curve. It is the same geologic formation (fault) you drop down when you come down 147 into Clear Creek. This rim catches the afternoon west winds and also, the big masses of black basalt catch a lot of sun and create updraft winds. It seems like a spot they could have some squirrely winds this afternoon. IR mapping from 2:45 pm, today. Red line is about 15 hours of fire spread. 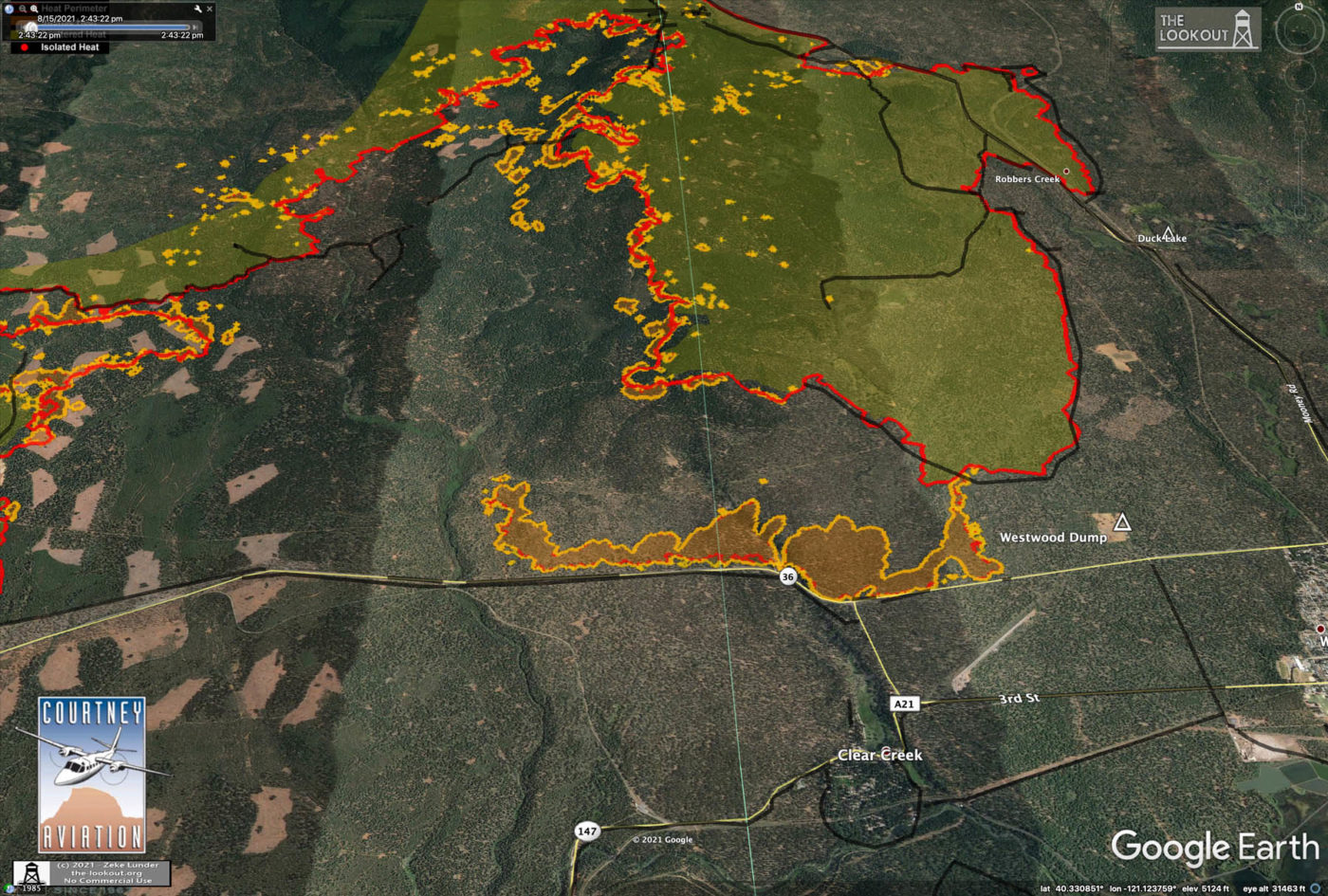 Firefighters are damned if they do, and damned if they don’t with firing operations like this. Putting a lot of fire on the ground is dangerous. When the fire is being spread by spotting, lighting a bunch of continuous fire creates a different dynamic than what is going on with the fire’s natural spread, and once you light it you own it, but on the other hand, there is also a huge risk in just leaving all of the existing heat and open line to the north just hanging;  so firefighters are forced into high-risk/high-reward choices like this one.

The trade-off of leaving the fire hanging up to the north is that being 2-3 miles north of the Highway, an afternoon run starting up there might run out of daylight before it got to Clear Creek or Hamilton Branch, and if the firing takes off, we’ve brought fire much closer to the community, and it wouldn’t take as sustained a run to get to the town. Very tough choices all around. But this is another prime example of land management history (heavy thinning) buying firefighters an advantage at a time where they need any leverage they can get.

Thinning along this section of Highway 36. Source: Google Street View, 2018 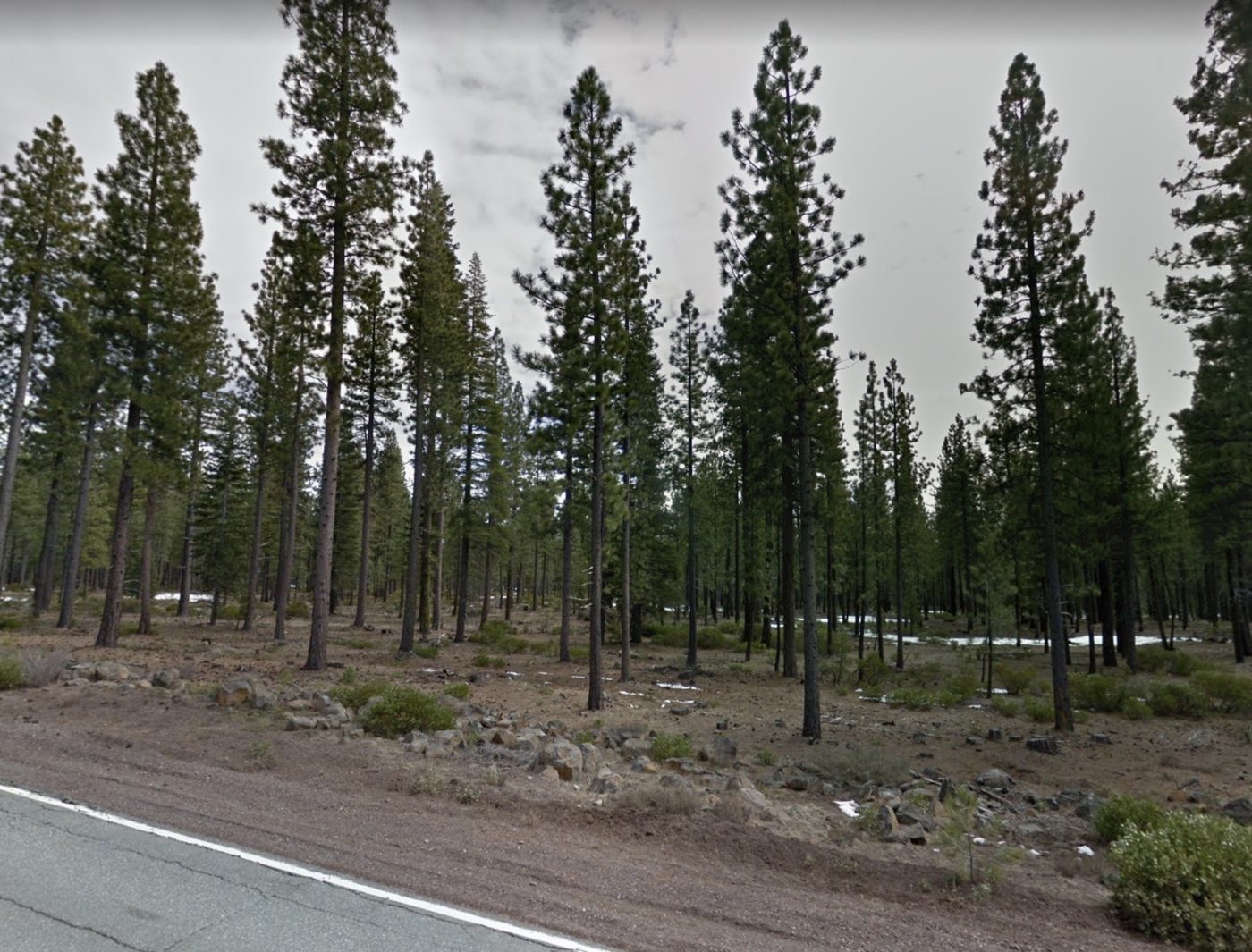 Some fairly significant spread on the west flank since 11 pm last night, when the red line on these maps was drawn. 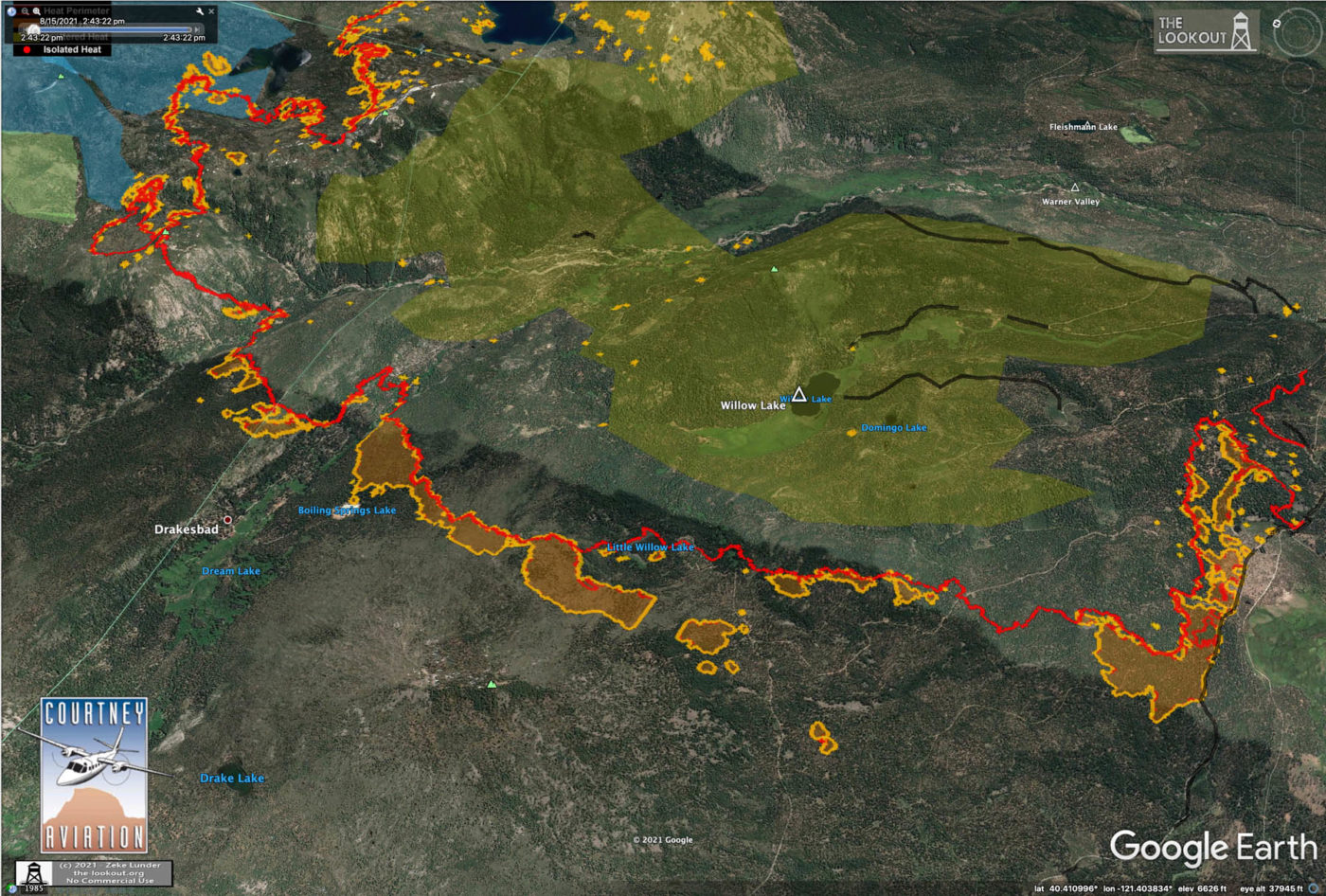 There has been some firing on Keddie Ridge since 11 pm last night. 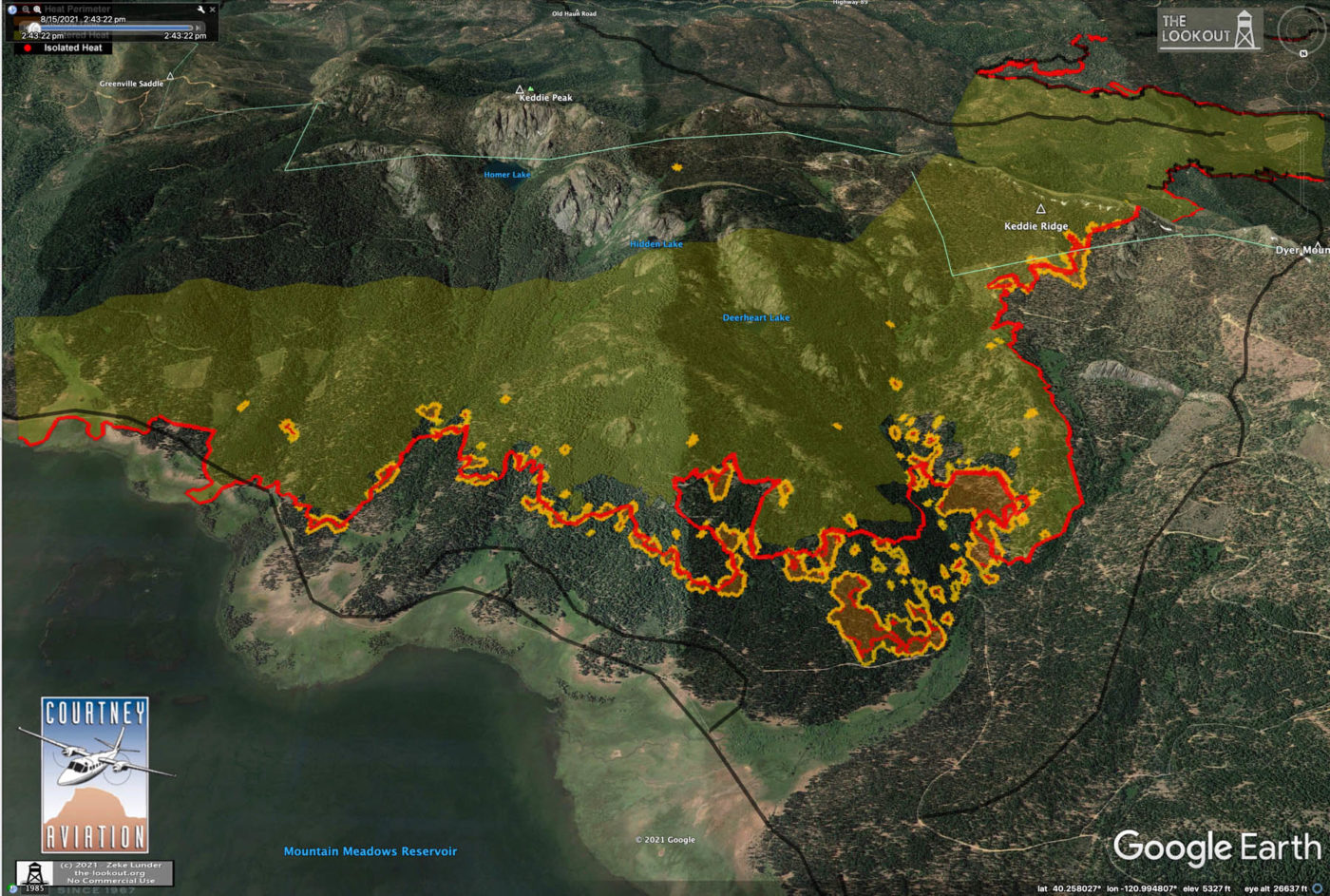 The fire spread on today’s IR for the NE side of Coyote Peak shows less spread of the flank toward Roxie Peconom Campground than last night’s flight, so either last night was inaccurate or today’s flight missed it, so I can’t vouch for accuracy of this image, that says 2:45 pm on it. 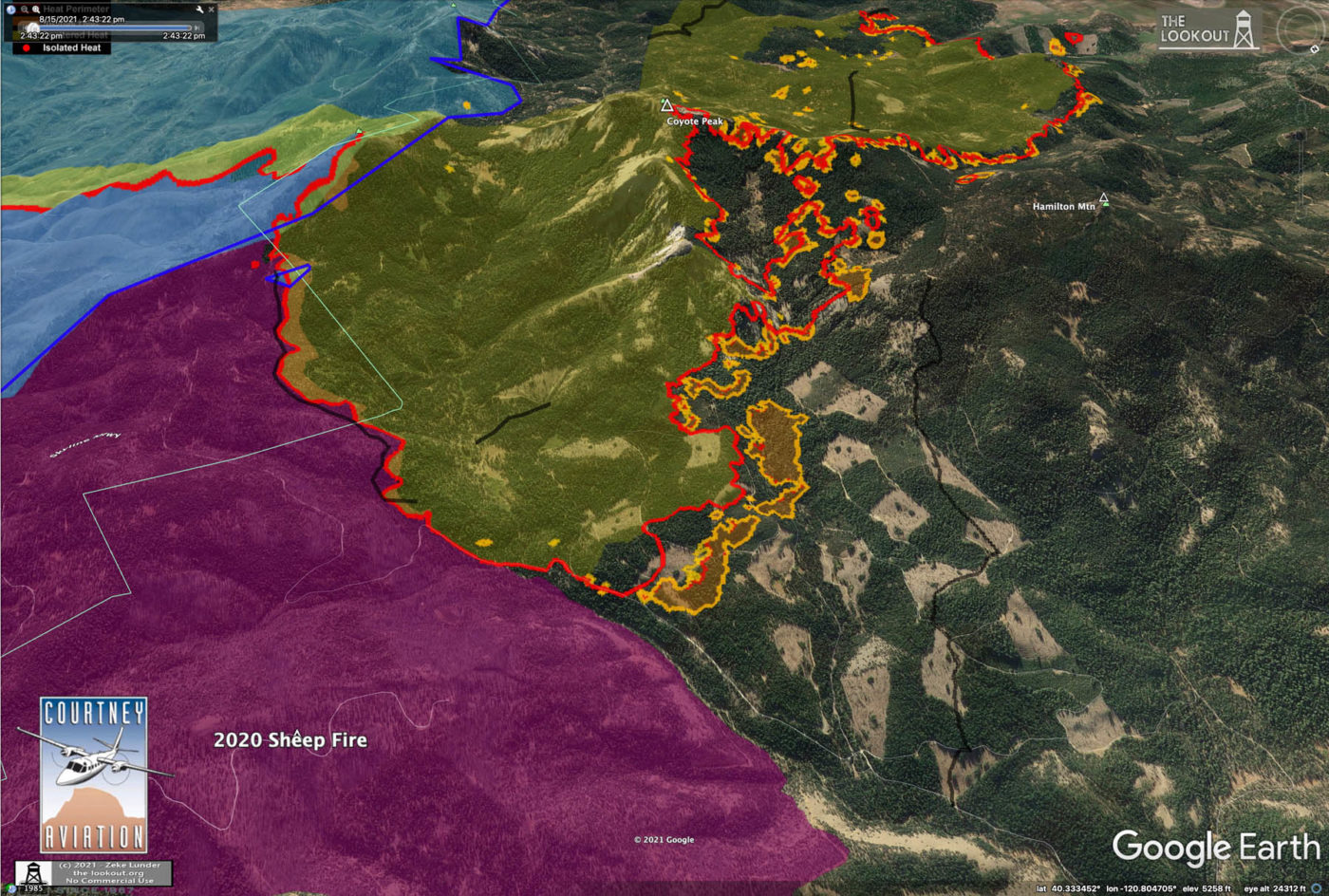 Not a huge amount of spread on eastern head of the fire at Antelope Lake. Biggest run as of 2:30 was about 1/2 mile. However, we are just now entering the peak of the burning period, so this is already stale intel. 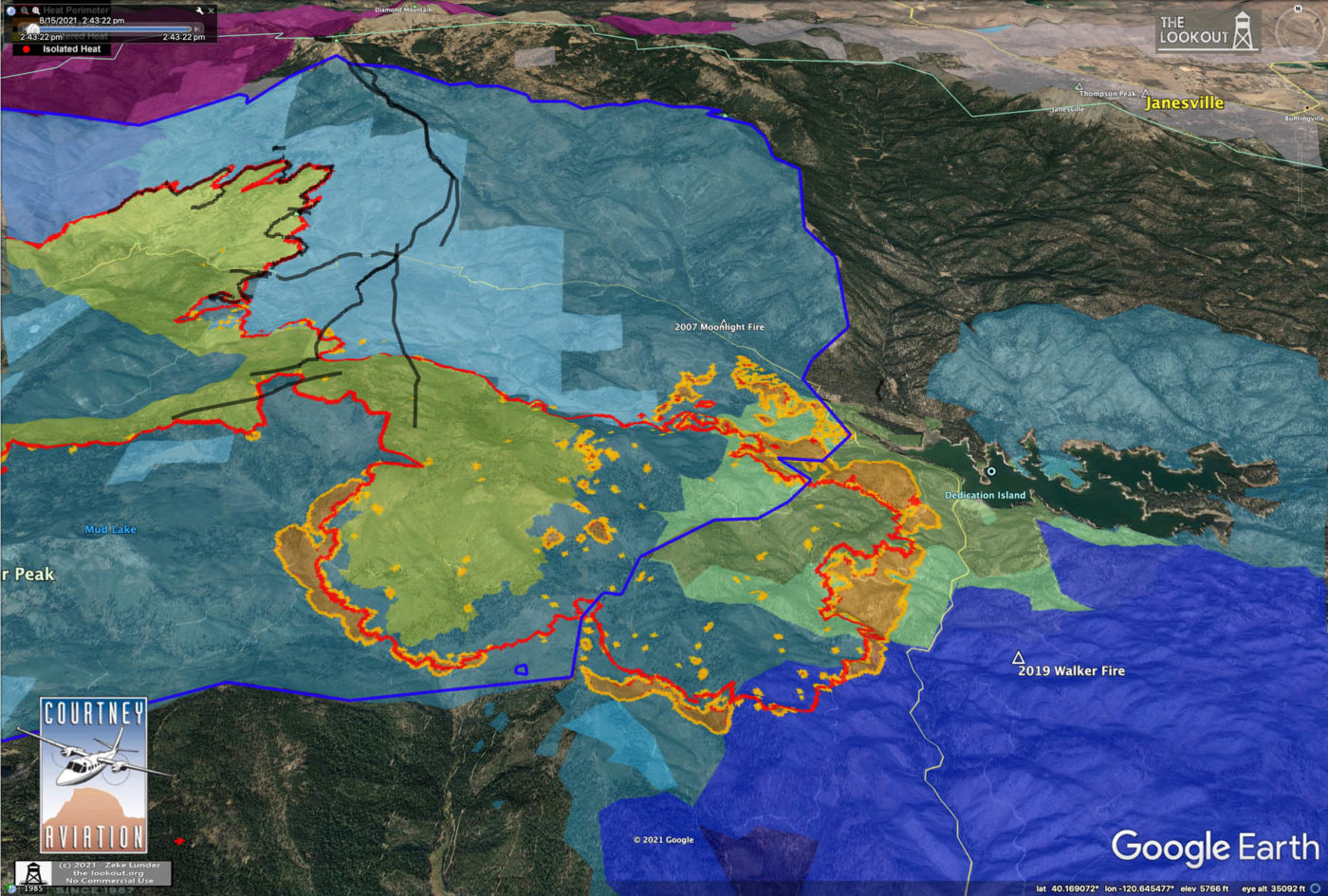 It looks like there has been some firing along the 28N00 Road. 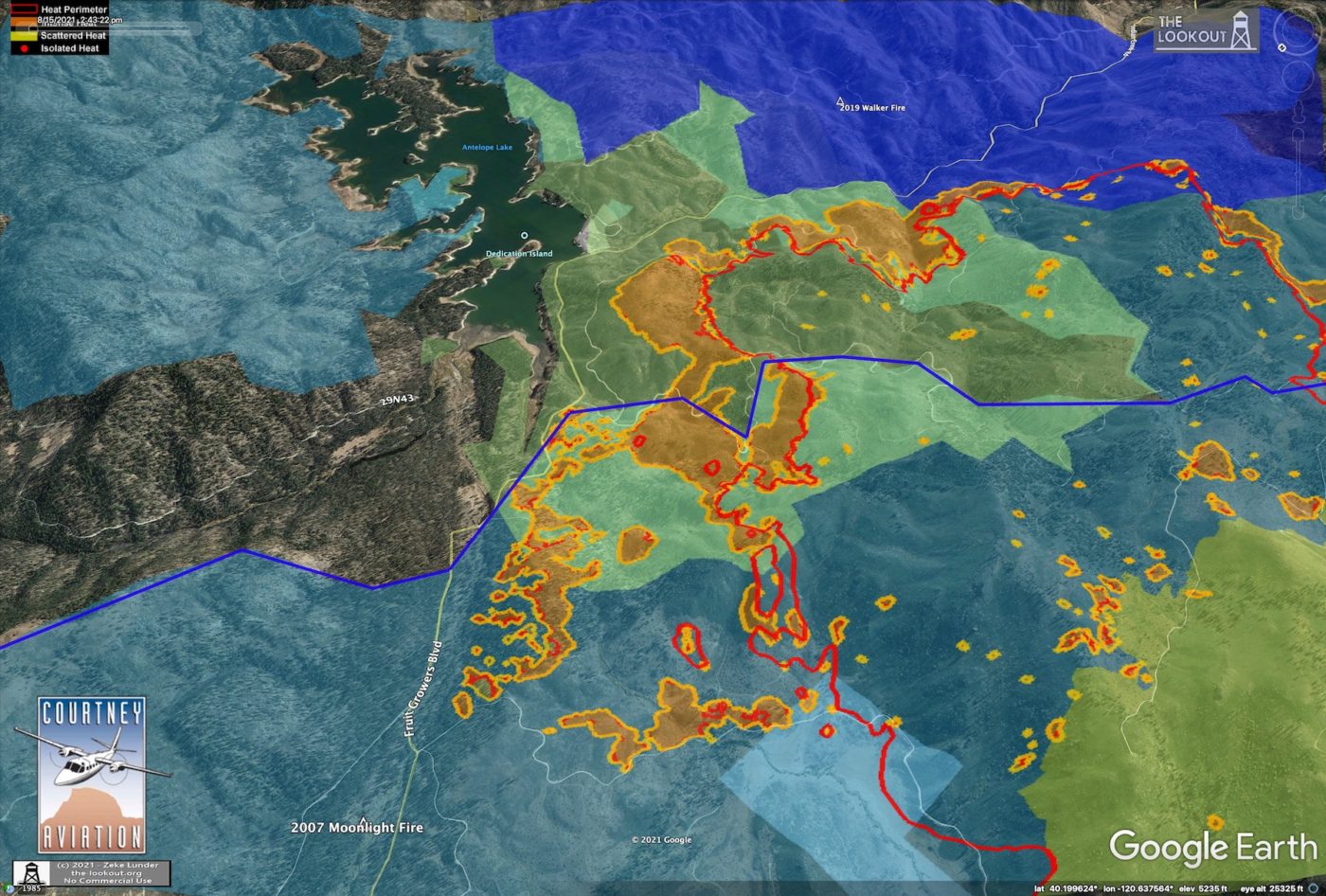 Steady spread continues in Peters Creek, but no big blowouts yet. 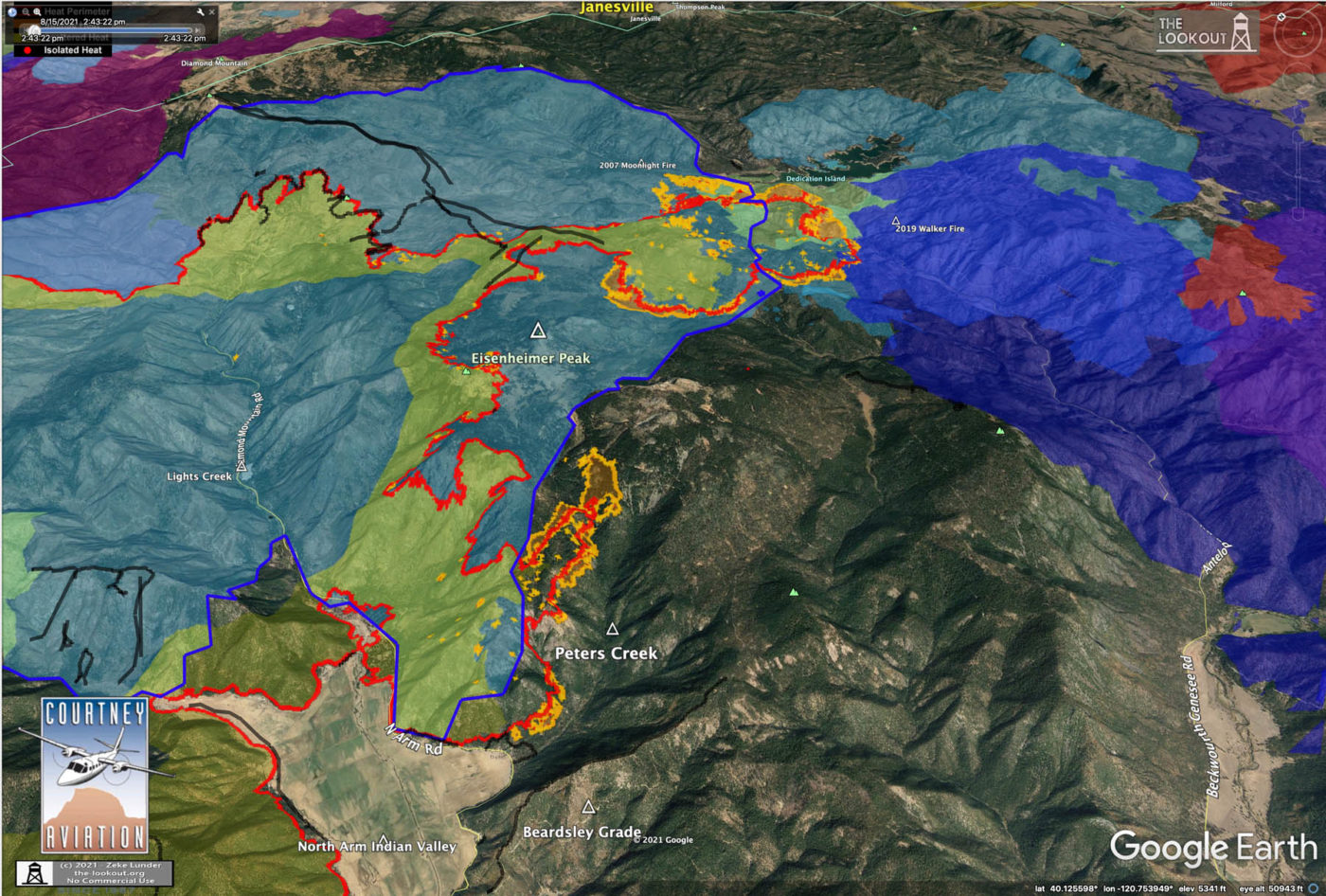 That’s all for now. Hopefully we’ll get an evening IR flight and I’ll have more intel for tonight’s update.