UPDATE: 7:00 pm.
Fire ran across the floor of Genesee Valley at the Heart K Ranch and made a big run up the hillside underburned 2 years ago in the Walker Fire (blue). That the Walker Fire reburned surprises the hell out of me. Most of the large trees survived the 2019 burn here, and I didn’t think there was much fuel left to burn on this slope!  Also, the spot fire on Grizzly Peak continues to spread.  IR mapping is from around 6 pm. 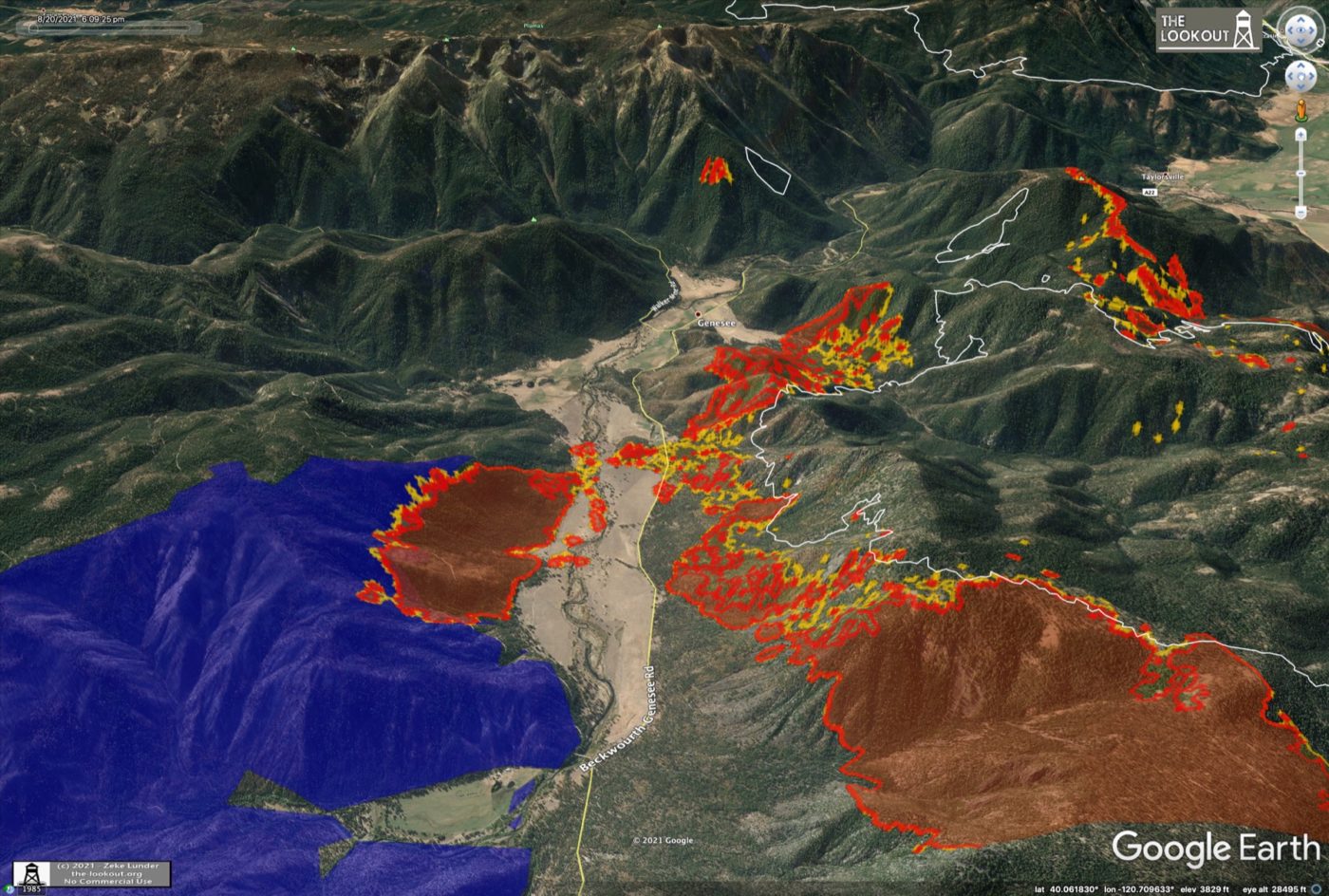 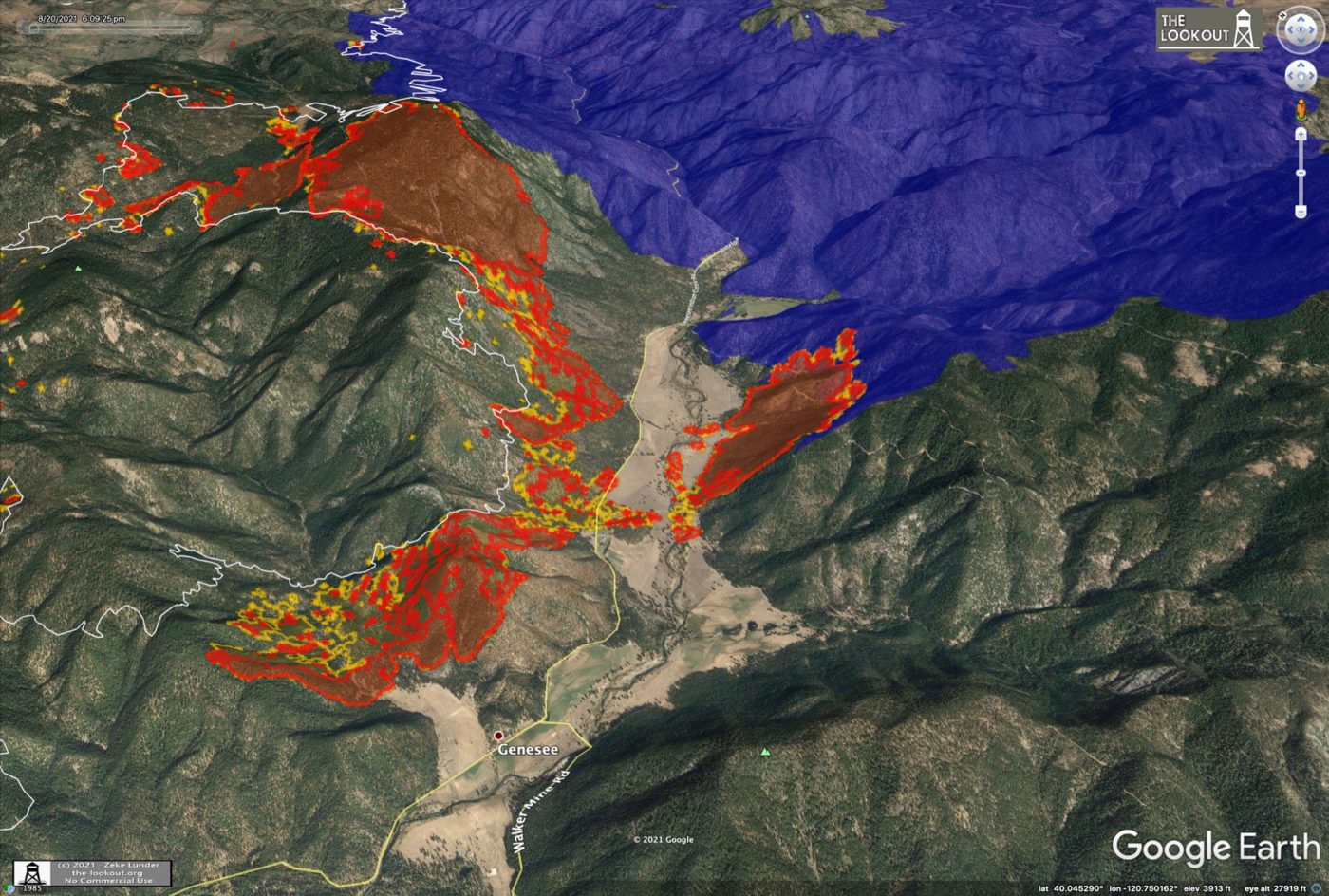 This image shows relationship of of fire spread in Genesee Valley to Quincy and Greenhorn Ranch. White is existing fire perimeter from last night. 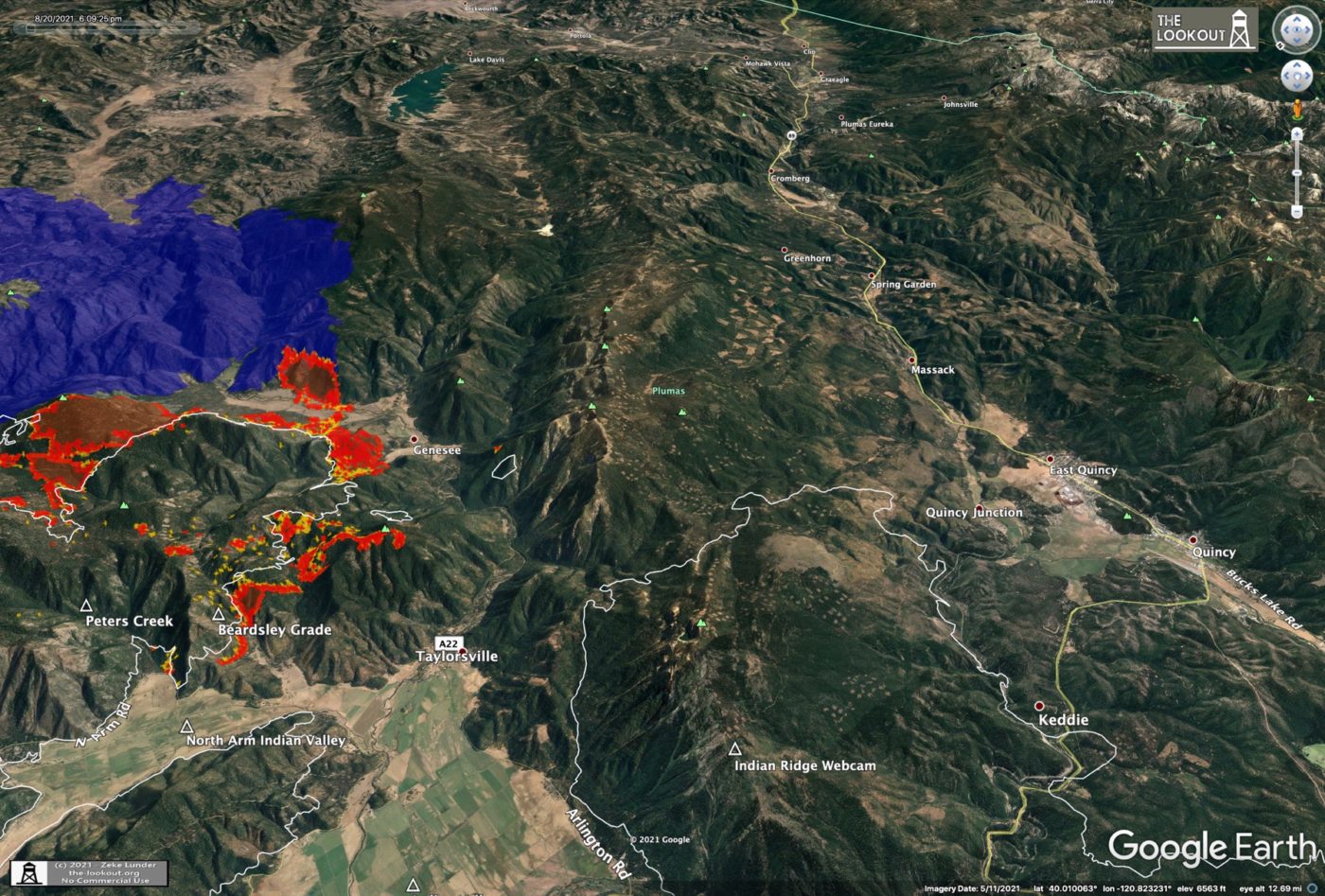 ORIGINAL POST:
The Dixie Fire still has some life in it. Local weather has calmed which has helped keep runs in check and from being as extreme as we saw over past couple weeks when the fire was making big gains. There continues to be some impressive fire behavior, however. Remain alert.

The major areas of concern right now are Fredonyer Pass, the escarpment south of Janesville, Genesee Valley and near Mill Creek. Plenty of heat remains in the fire on the north side of Lassen Park and Caribou Wilderness, but fire spread has been slow there. I discussed this area of the fire in last night’s update. 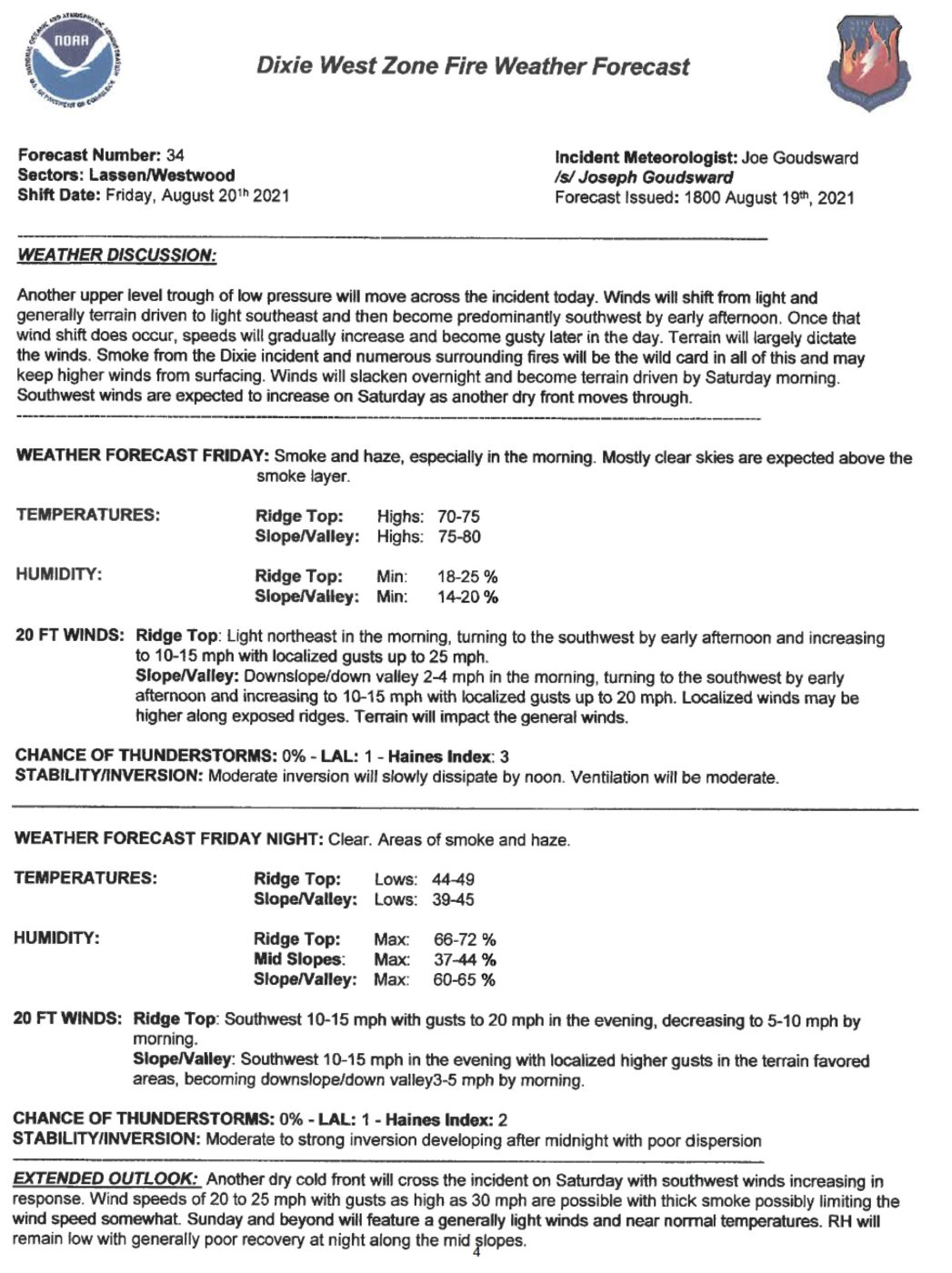 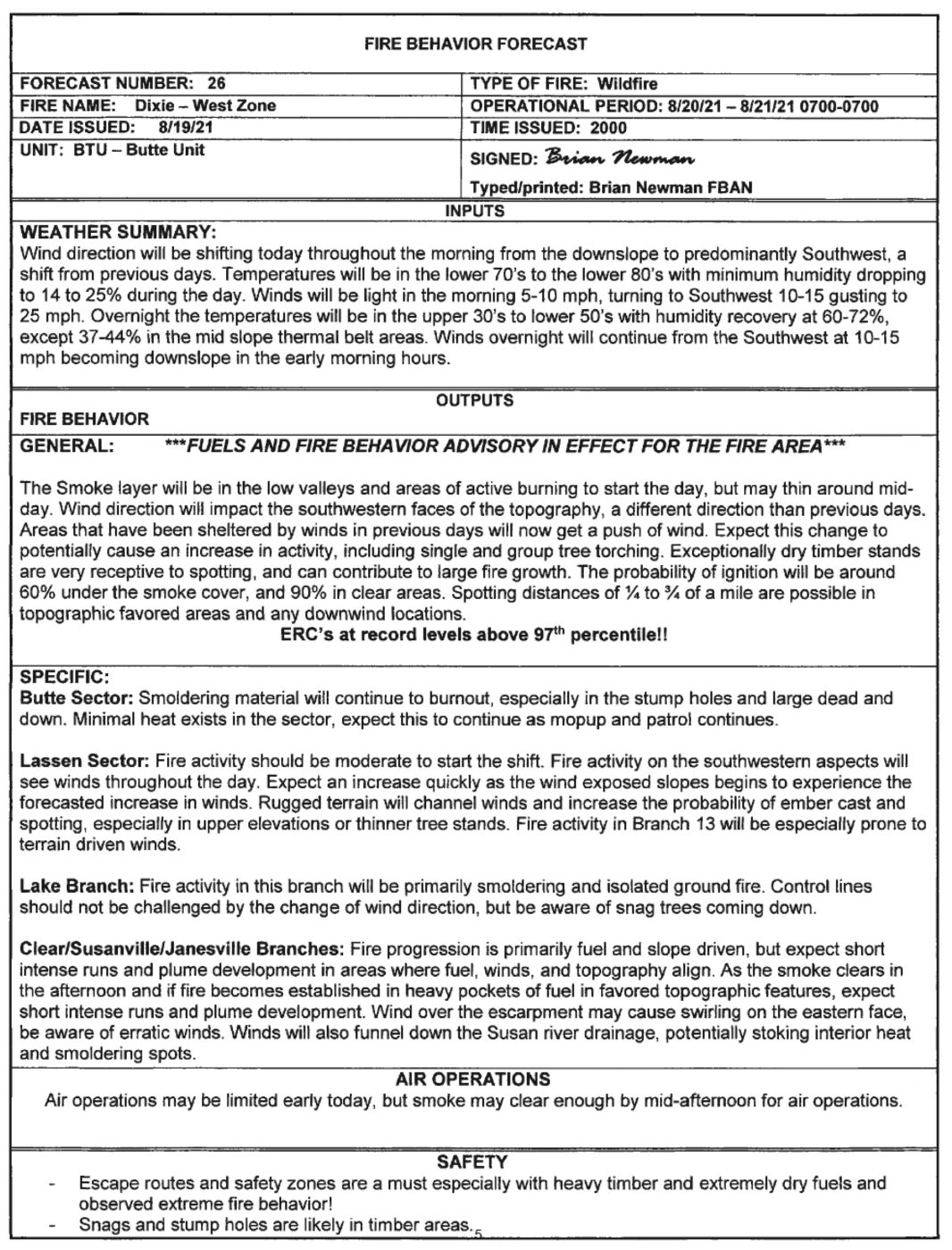 Unclear from the infrared mapping how well things are holding on the west side of Fredonyer. The white lines show 24 hours of fire growth. The fire has largely held in place on the middle of the ridge between Mountain Meadows and Fredonyer Summit, and it looks like there may be a dozer line around the heat in the center of this image down to Moonlight Road. Last night’s IR showed fire slopping over the Hamilton Mountain Road, but they may have picked this up overnight. If crews can salvage their firing operation there, this part of the fire could be looking good. A switch back to westerly winds would help a lot. We’ll  have better info tonight. 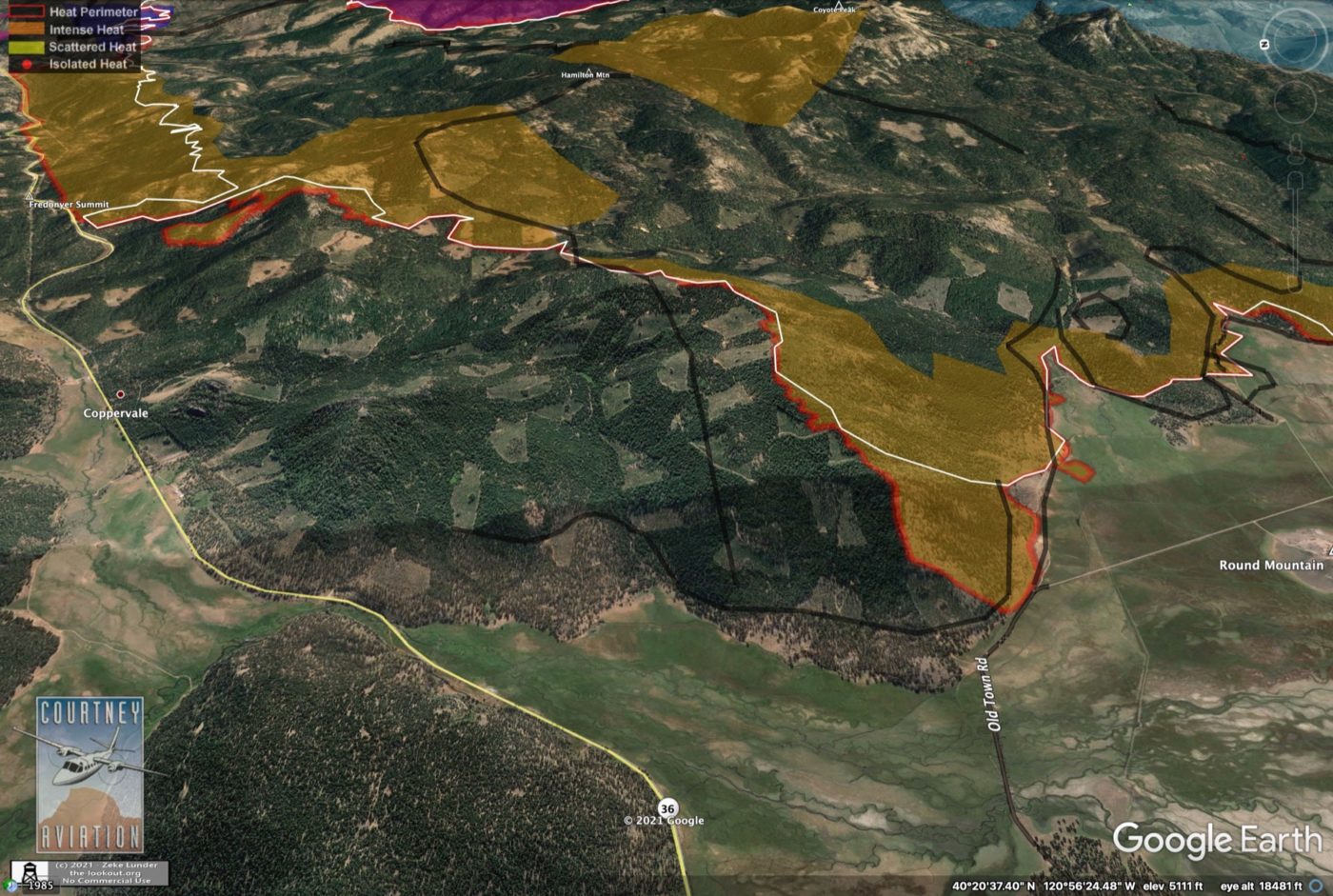 An area that has been getting less attention over past two weeks is the northern boundary of Lassen Volcanic National Park and Caribou Wilderness. Last night’s IR shows the fire crossing the northern boundary of Caribou Wilderness (green in the map below) and back onto general National Forest lands. As I mentioned last night, the wild volcanic landscape in this area creates very localized strong winds. The alignment of the finger of fire leaving the wilderness area is concerning: To the northeast lie a series of mini-volcanoes. The notches between these volcanoes experience higher winds and are places that spot fires could blast out of and cross the main dozer line to the north. 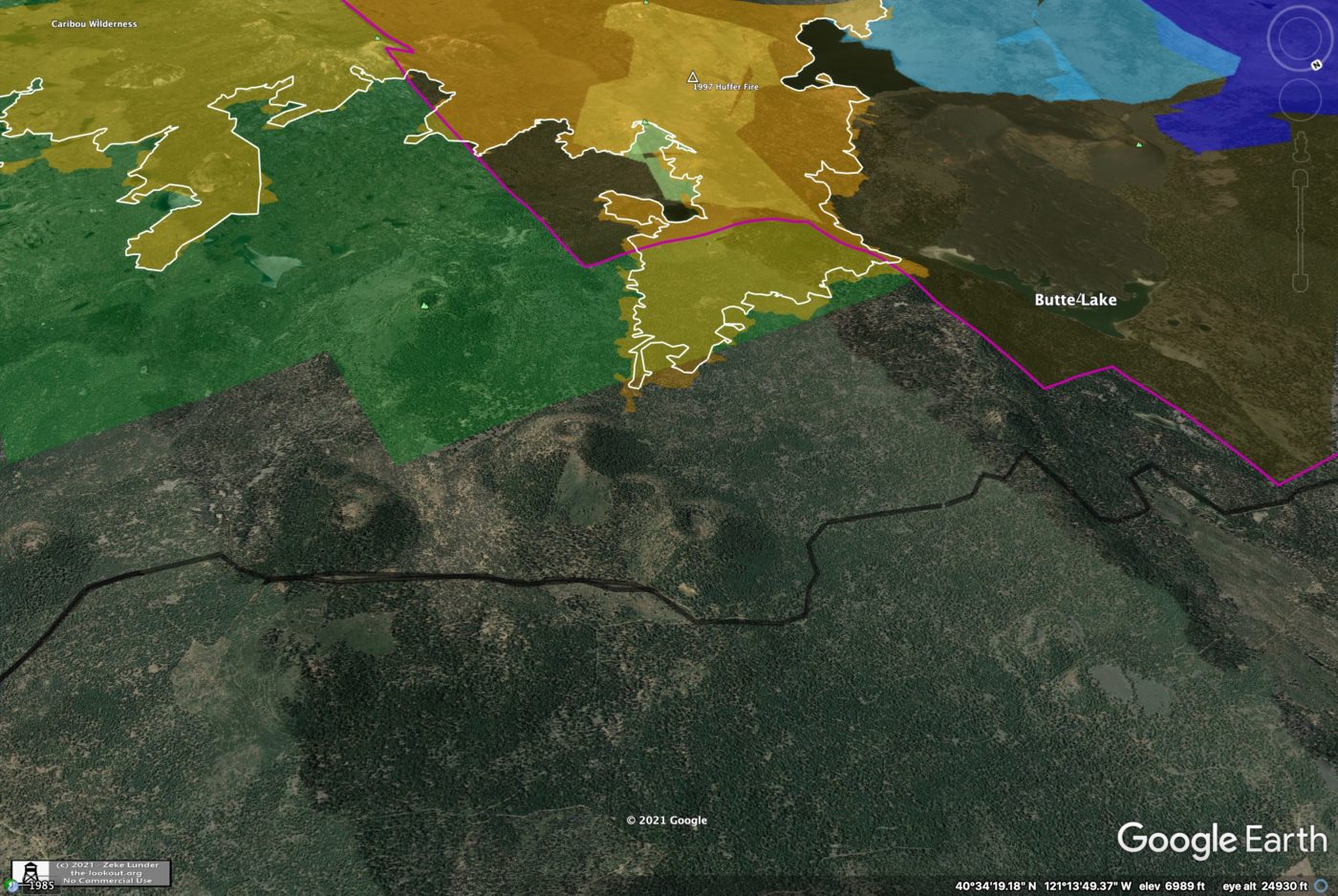 EDIT: 8/21/2021:
This map shows the funky geology of this area and new spot fires (thanks, Caltopo.com) The main dozer line here is along the 32N09 road, just north of these volcanoes. I what I thought were spot fires might be the afternoon heat radiating off the basalt rocks on these volcanoes, or they are erupting just to add to the chaos. 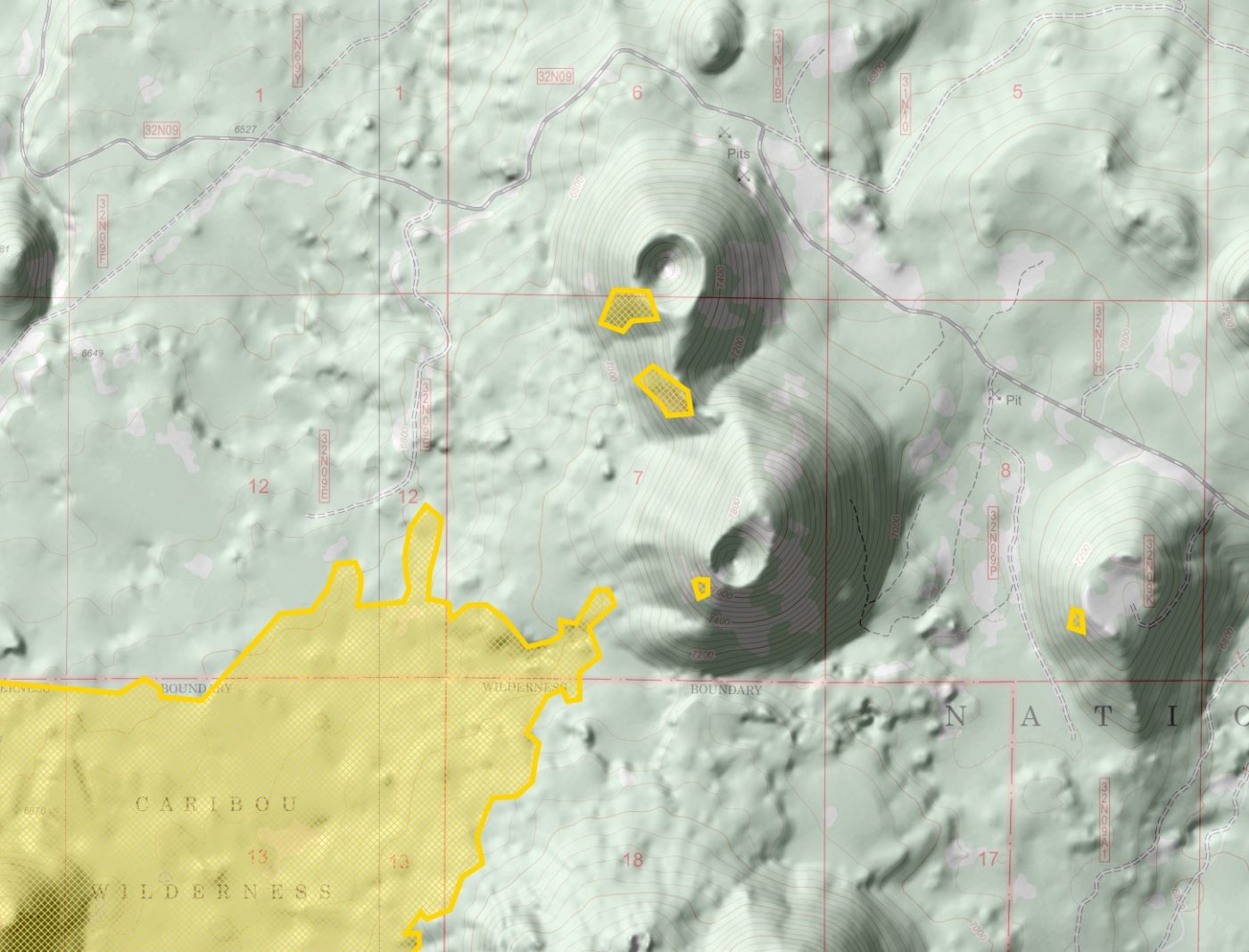 The fire also continues to spread south onto the Mill Creek Plateau, east of the Mill Creek Cabins. It is backing off the Plateau into the canyon here. 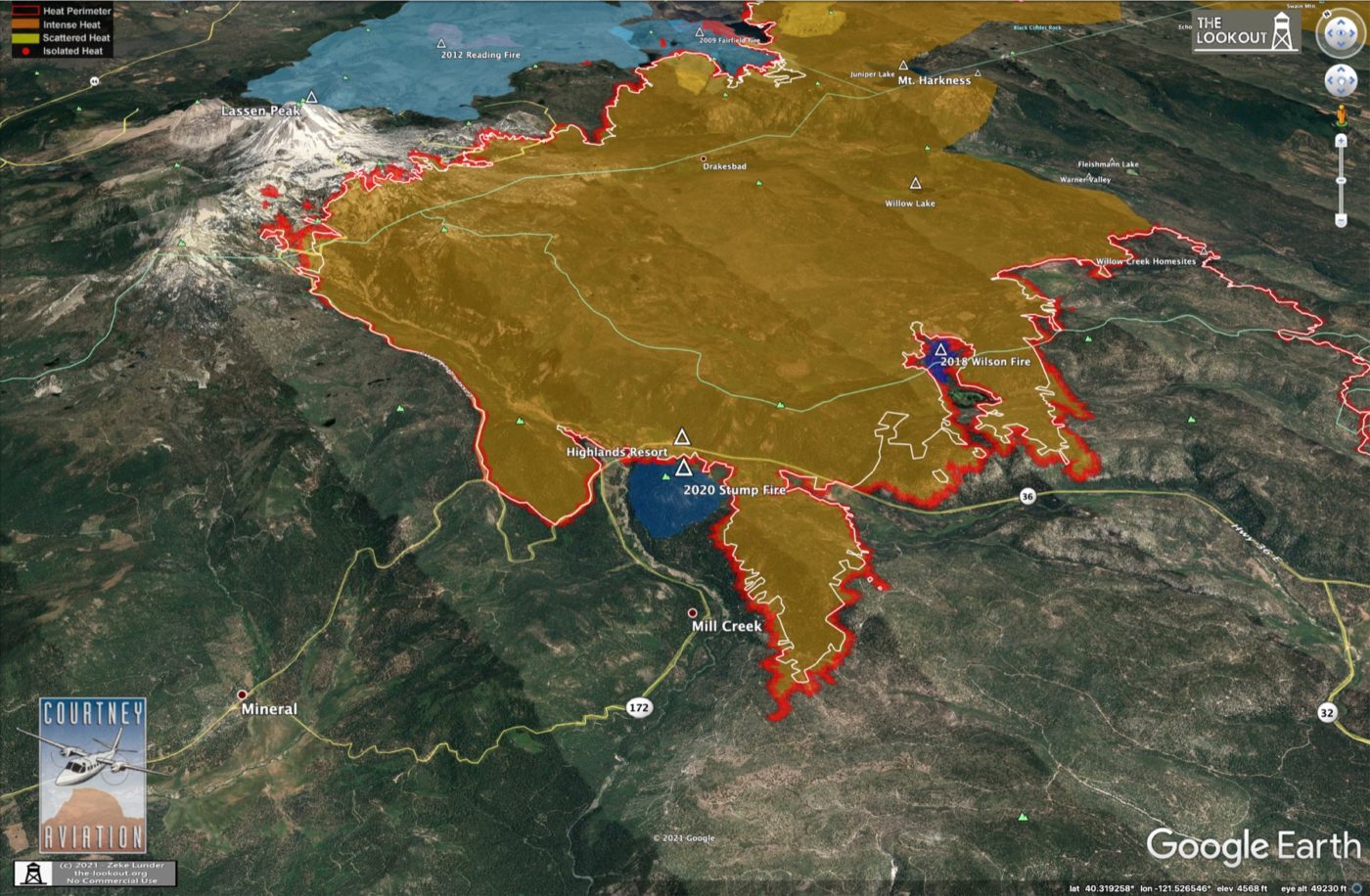 There is a little bit of heat and fire spread showing on the south side of Dyer Mountain. This is showing up on the heat satellites as well. This section of line hasn’t spread since about August 8. 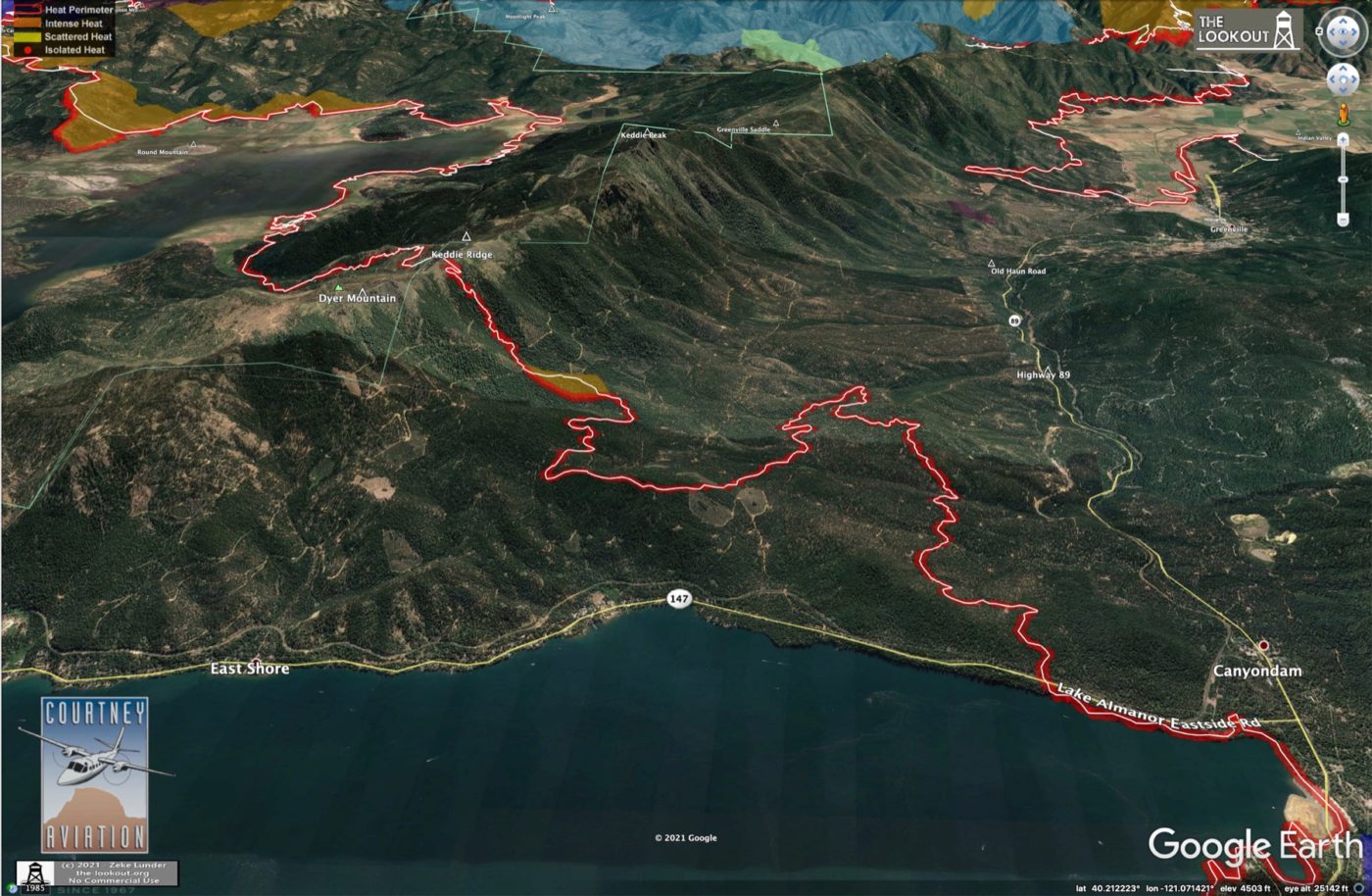 To the east, the fire is growing back into Genesee Valley. The spot fire onto Grizzly Ridge is well-established, but did not grow at an aggressive rate yesterday afternoon. 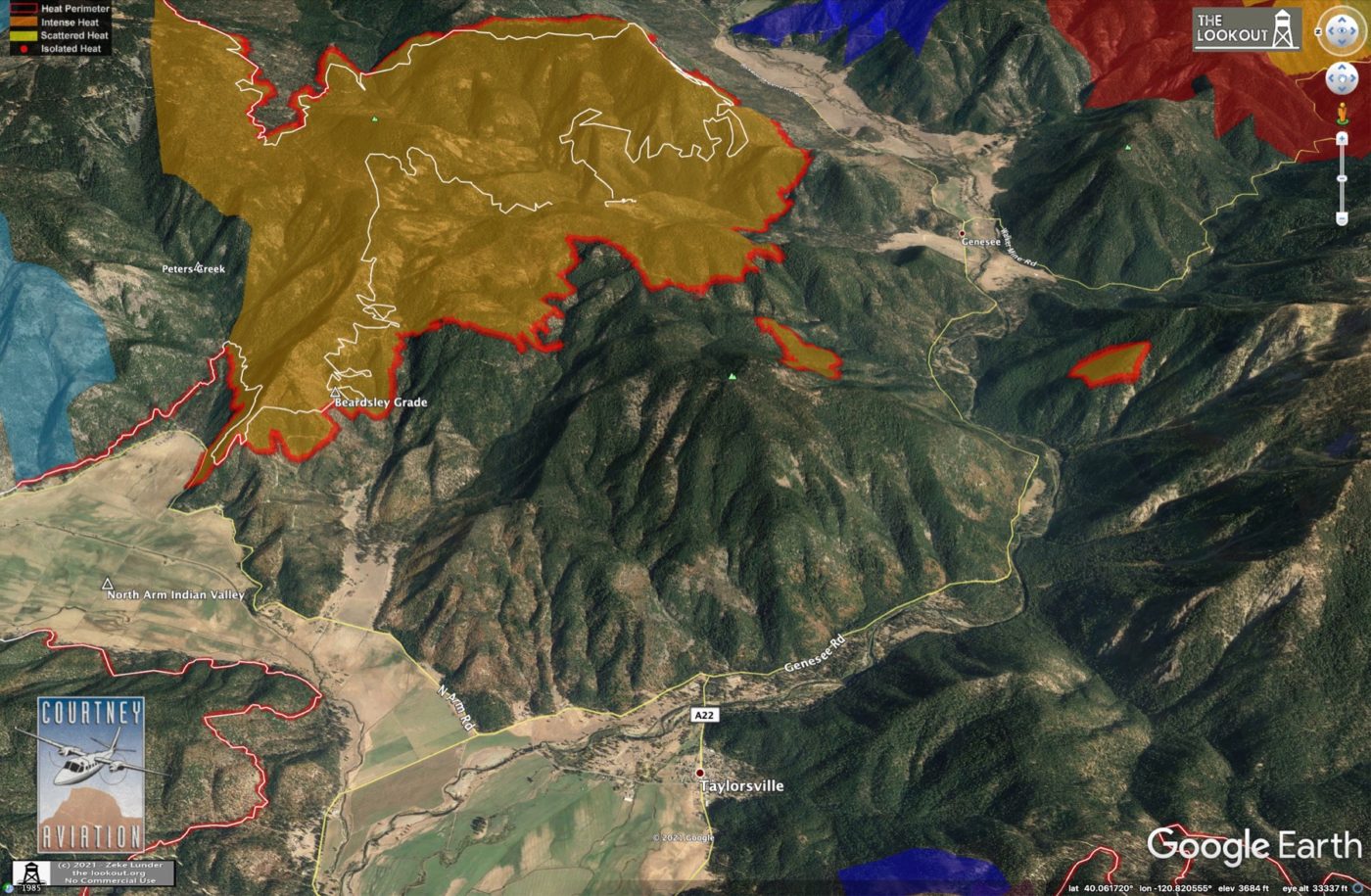 The fire has not spread much east or west on the escarpment south of Janesville. This area is very difficult to access, but clear air made it possible to use heavy airtankers here yesterday. 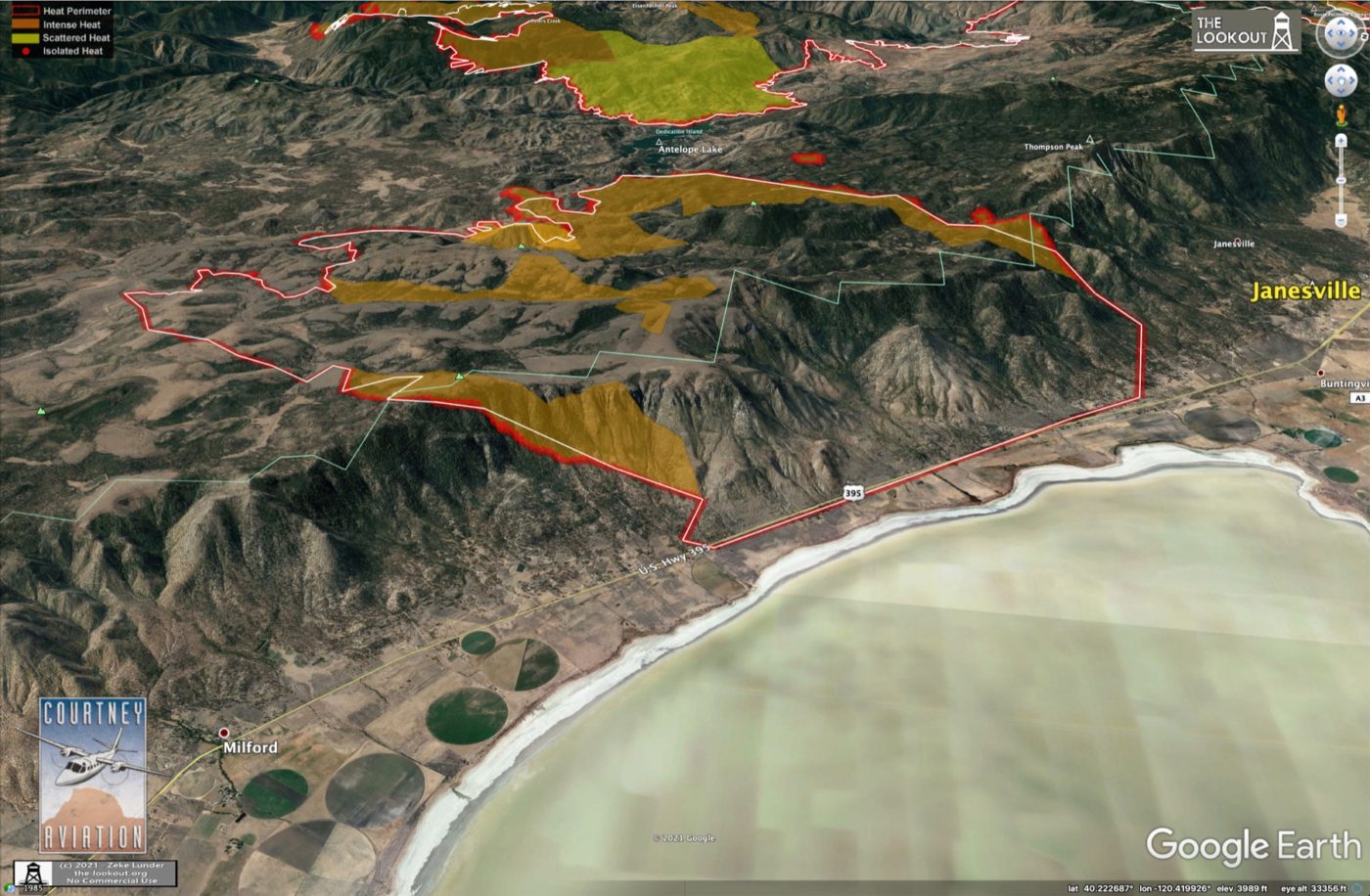 Below you can see a minor spread to SW West of Janesville. 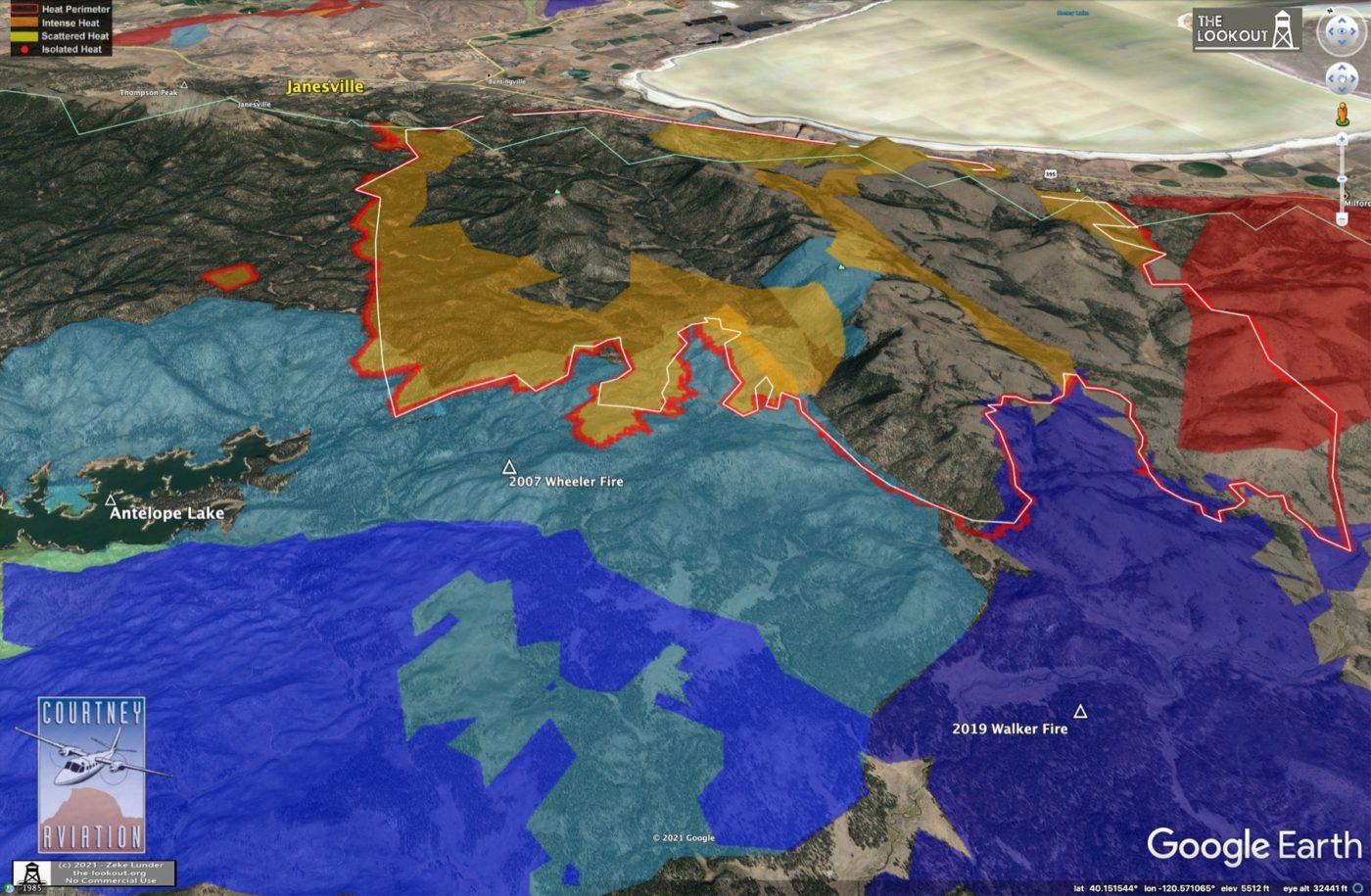 If you are working on a fire and see us posting information that is inaccurate, please shoot me an email if you can. I am basing most of my interp off of IR imagery and pieces of intel from all over. We really want to get the story right.