About 3,500 acres of new spread since 8pm last night, shown in purplish-red with yellow outline. For the most part, fire was still in the 2012 Reading Fire (blue) footprint at 4:45pm, but there were some spots taking off outside the perimeter and across dozer lines on the northwest flank of West Prospect Peak. There was no new growth on southeast side of fire on this afternoon’s IR. 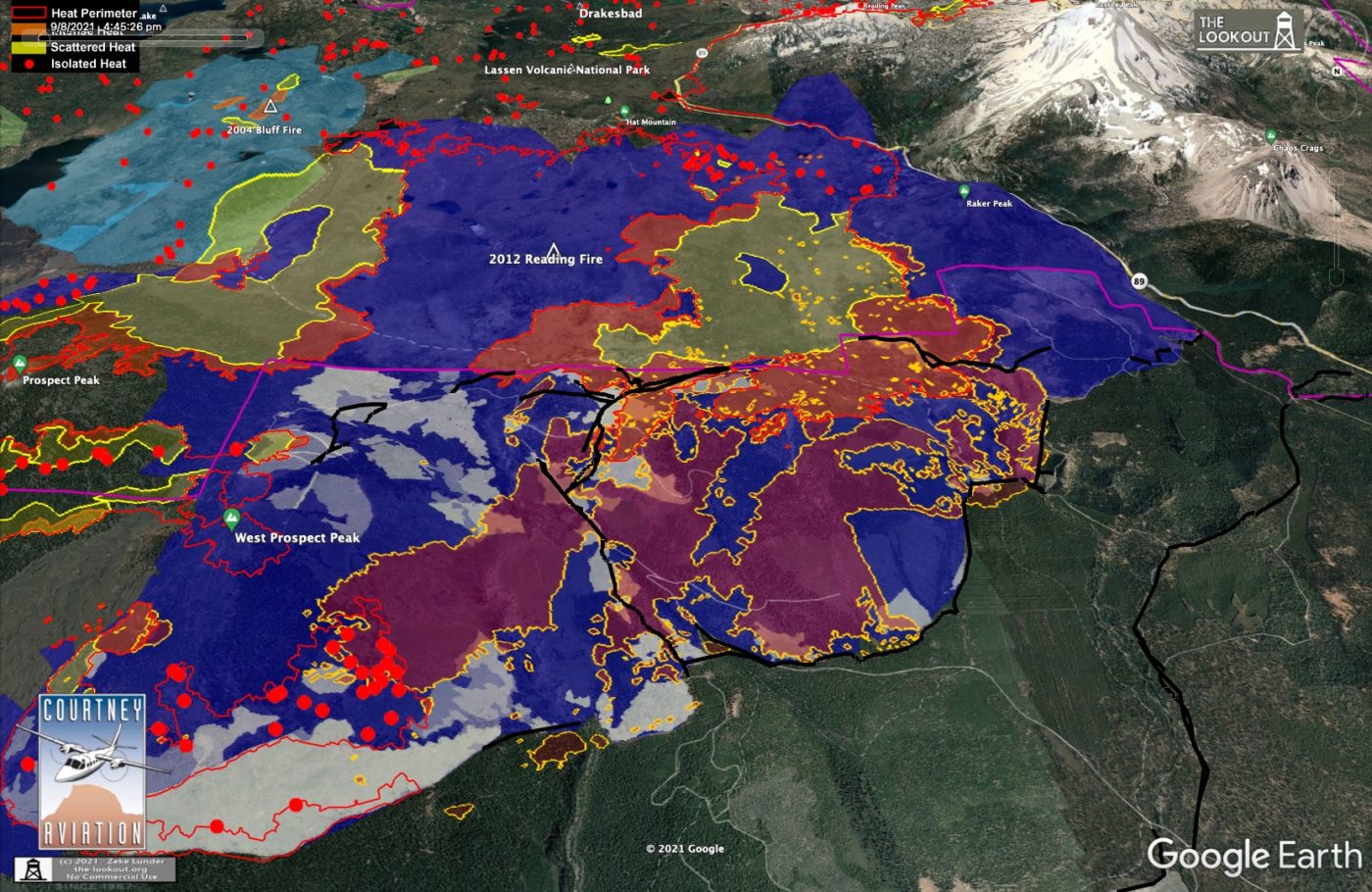 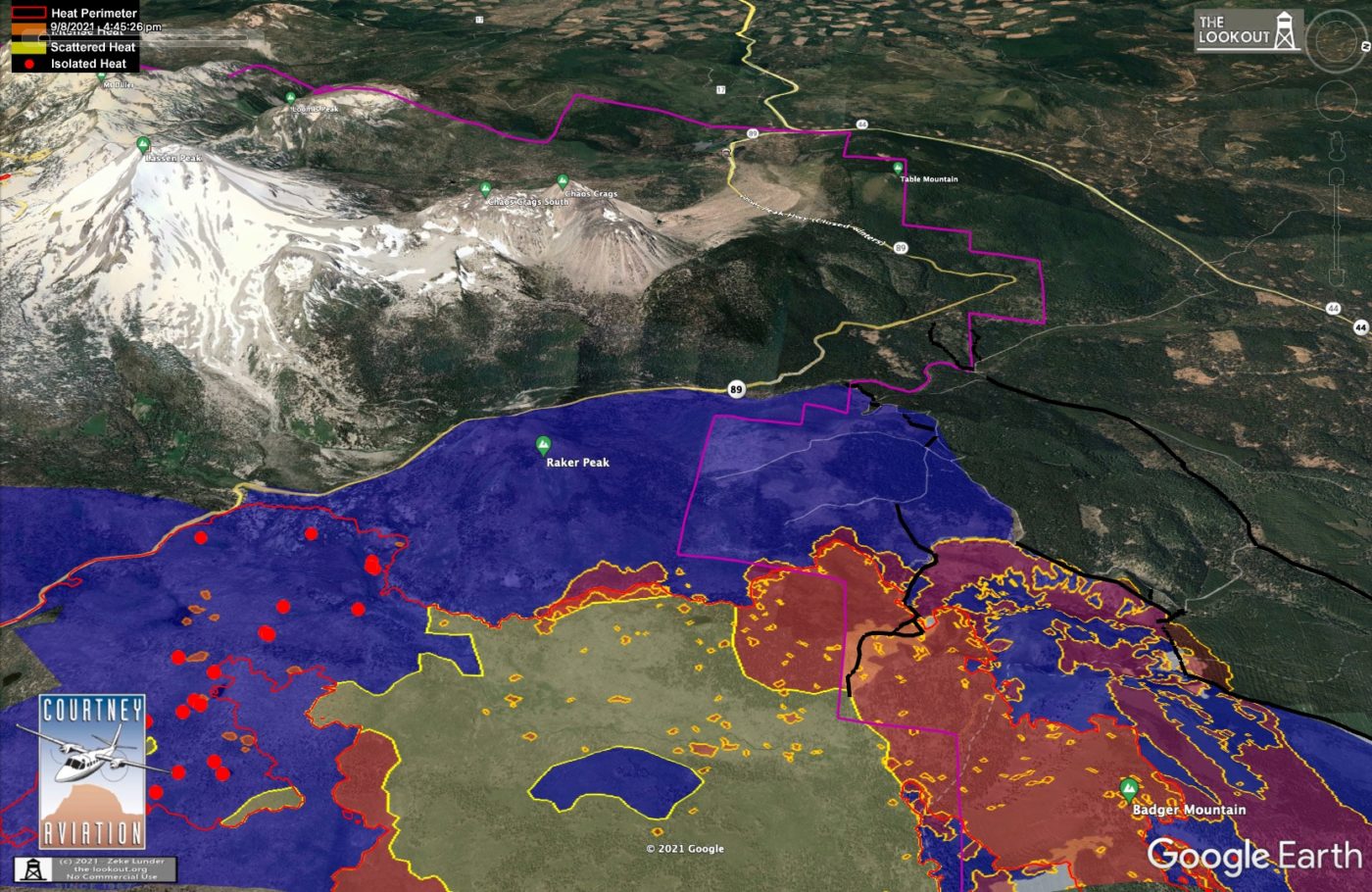 9/8/2021 at 2pm
There is a major firing operation going on right now on the north end of the 2012 Reading Fire. This is an attempt to keep the active spread from past few days from leaving the Reading Fire area and getting into other areas that have not burned for decades.

Here are maps with heat sensed at about 1:20pm on September 8. The spread to the north has really started to pick up in the past few days. Last week the brush here was too green to carry enough fire for successful burning operations, so the increasingly gnarly conditions have forced firefighters’ hand. It’s early in the day, and given what we’ve seen in past two months on Dixie, it will be a miracle if this fire stays inside the lines. The brighter red color is where fire was last night at 8pm.

First map is looking southeast over Badger Mountain. I’m not sure if fire across the dozer line mid-right at bottom is a mapping error or a slopover. 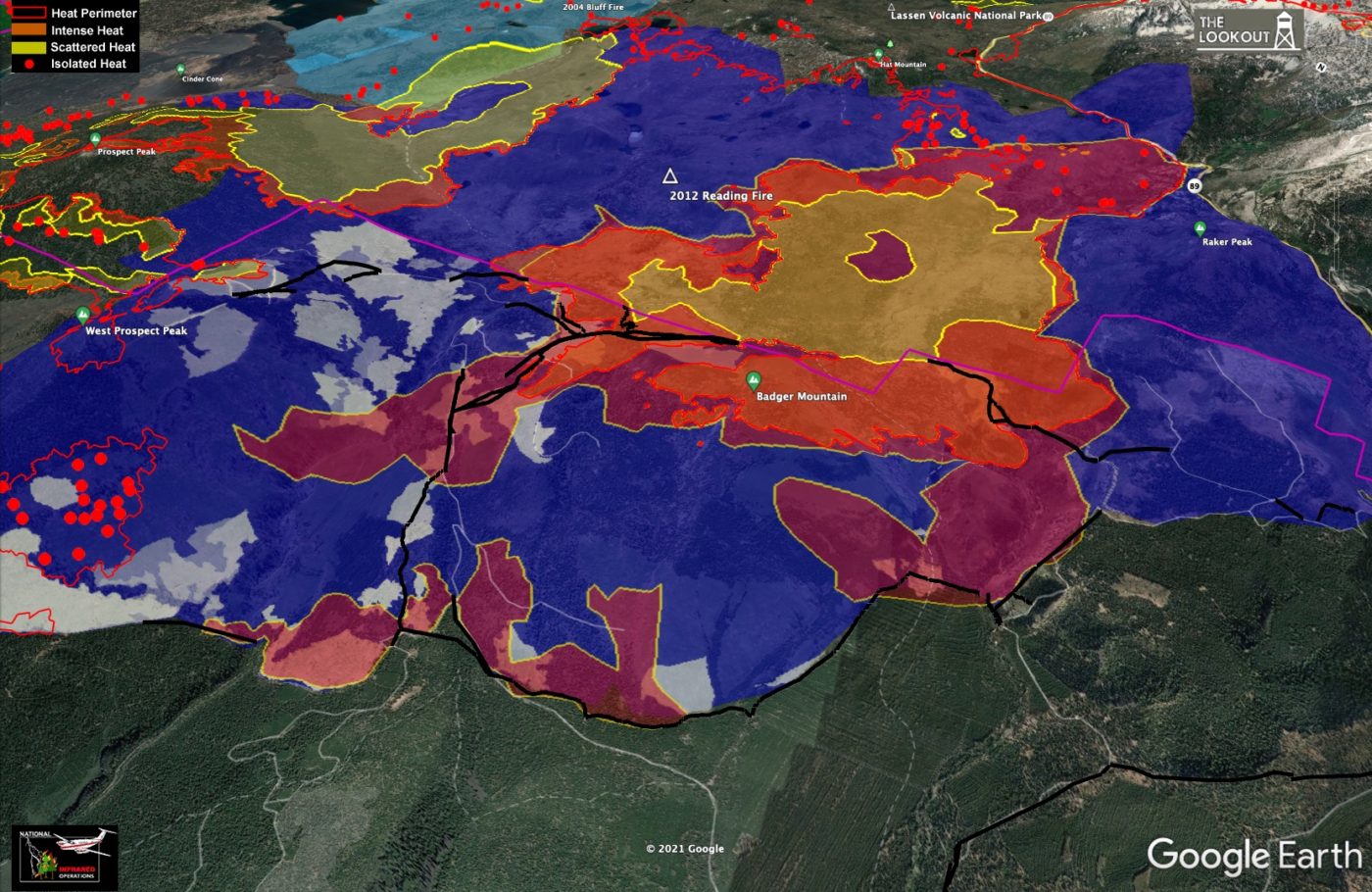 Looking southeast over Badger Mountain at a lower angle. Purplish-red is new fire from firing operations along bulldozer lines at north end of the 2012 Reading Fire. 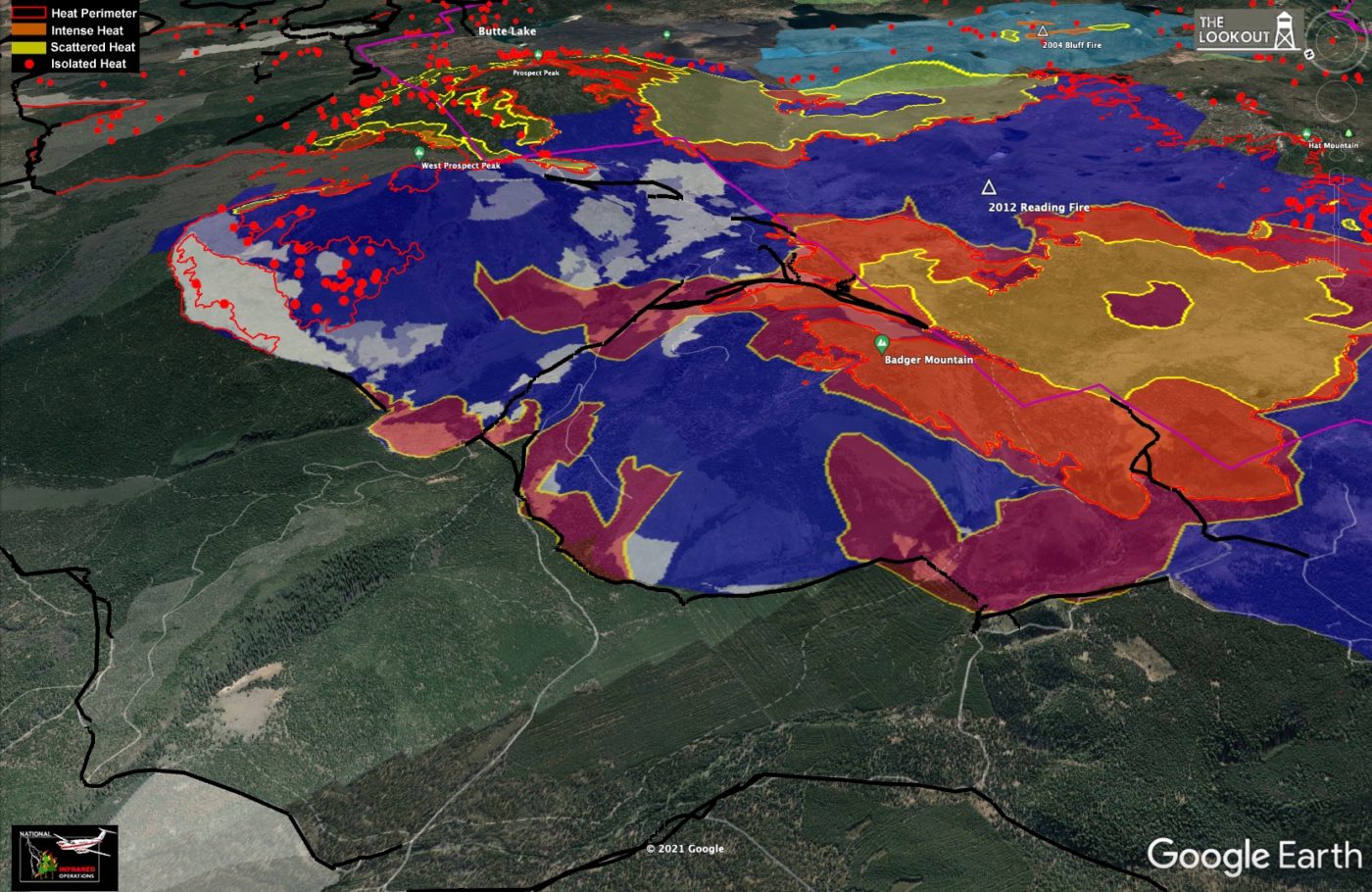 9/8/2021 at 12:30pm update:
Heat mapping (purple) captured at 12:30pm on September 8 shows some new fingers of fire down to dozer lines near Herlong Junction. I don’t have info on fire intensity here, the red line shows where fire was at 8pm on September 7. 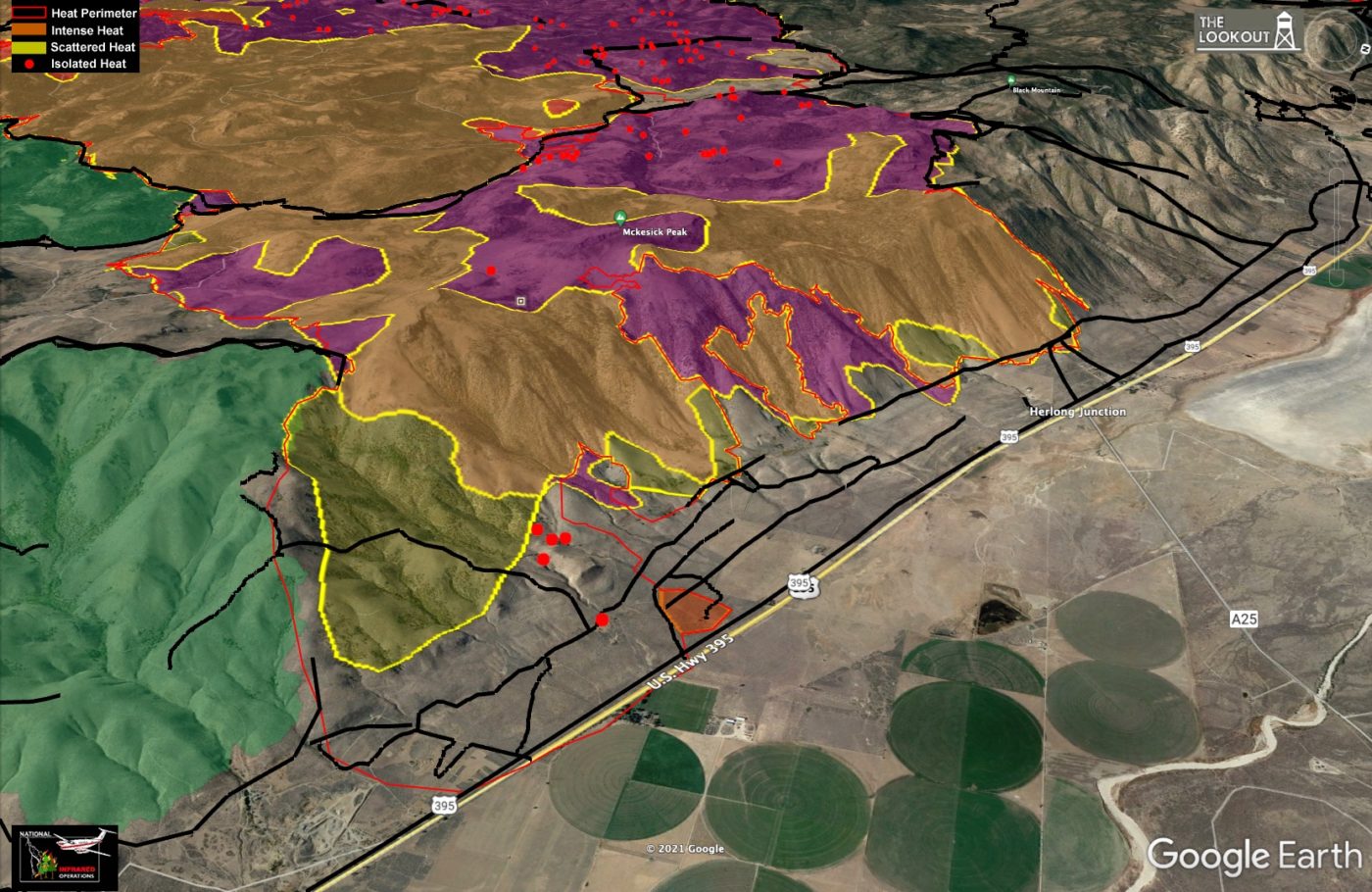 9/8/2021 at 10am
Here are heat maps of the Dixie Fire on September 7 at 8pm. White line shows 24 hrs fire spread. North arrow in bottom right.
These are prepared by Lookout contributor ‘Tumbleweed.’

Looking south over the 2012 Reading Fire (blue) toward Lassen Park Road. The fire blew up for about 4,500 acres in the past three days and crossed bulldozer firelines yesterday on northern park boundary. 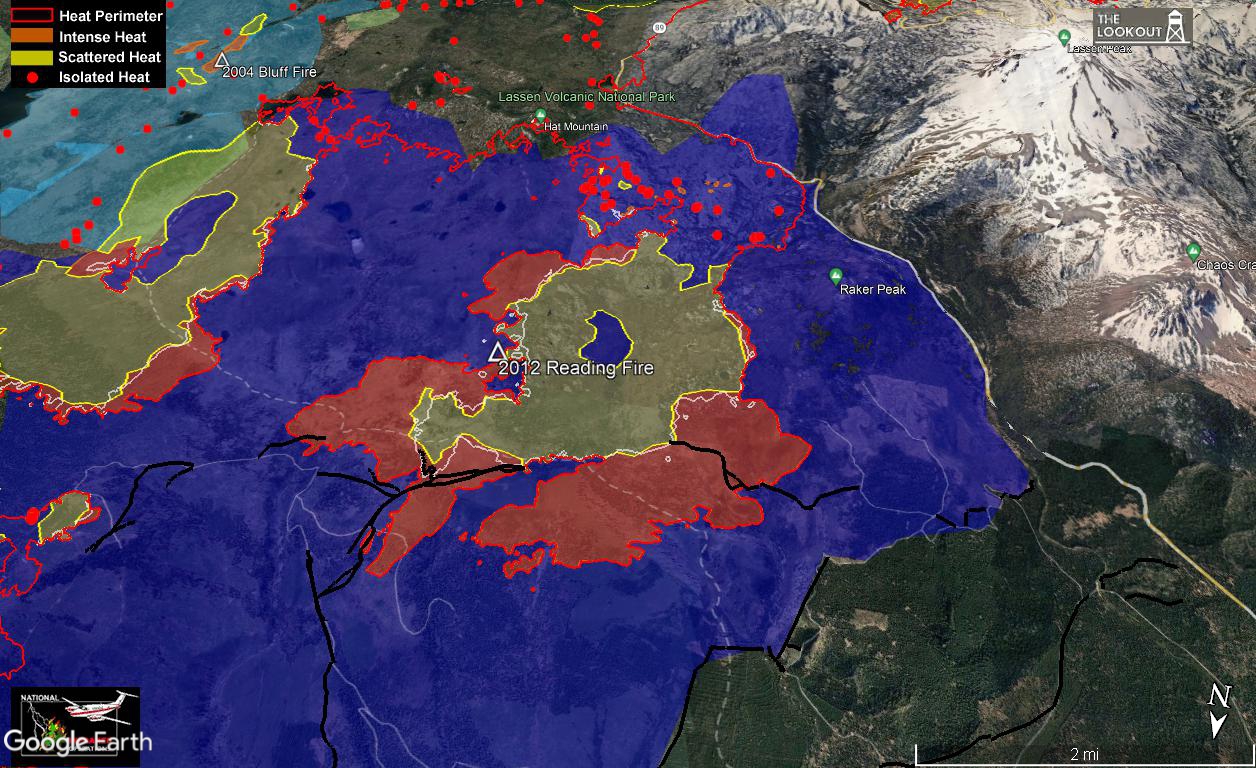 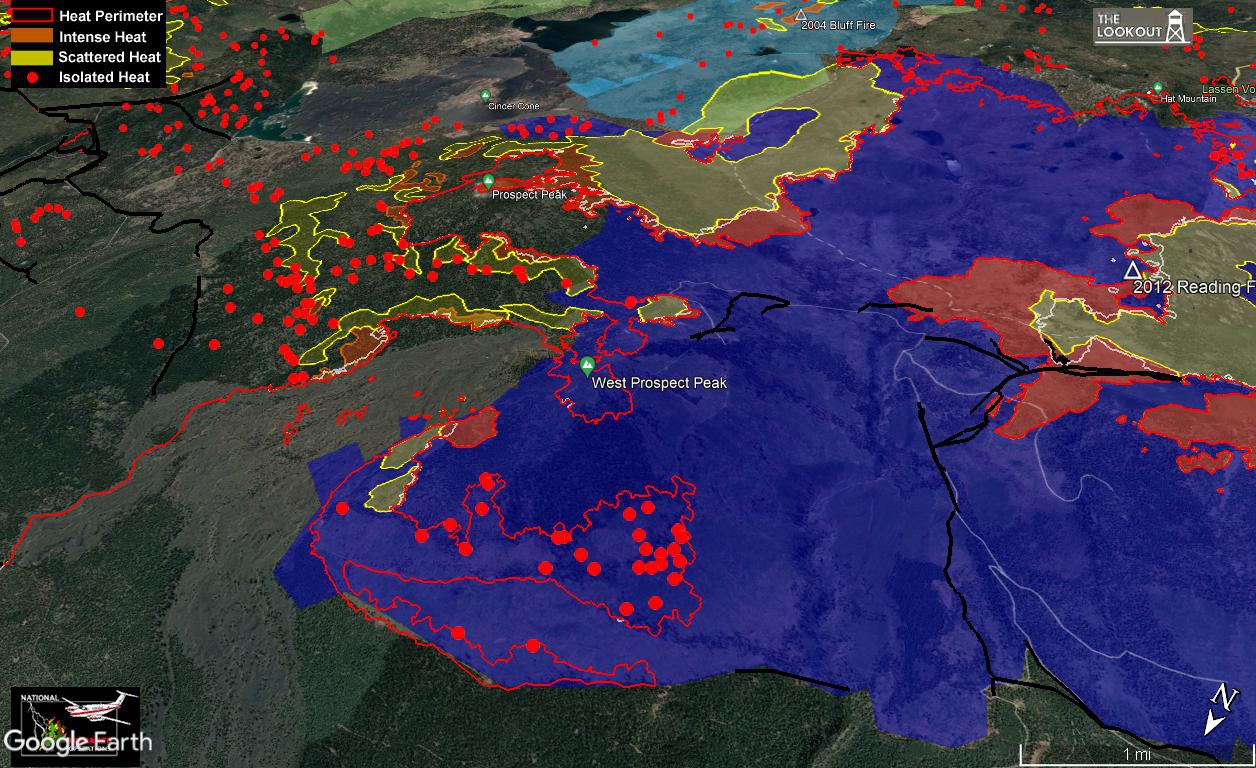 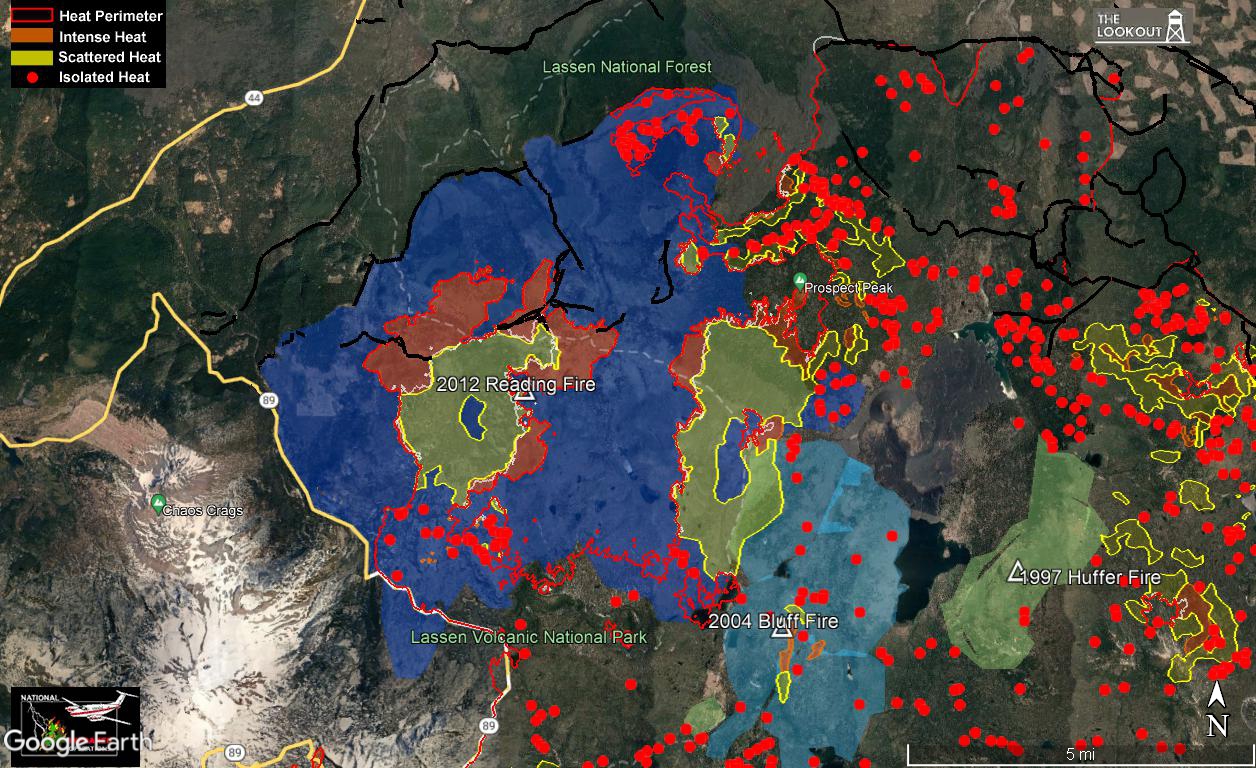 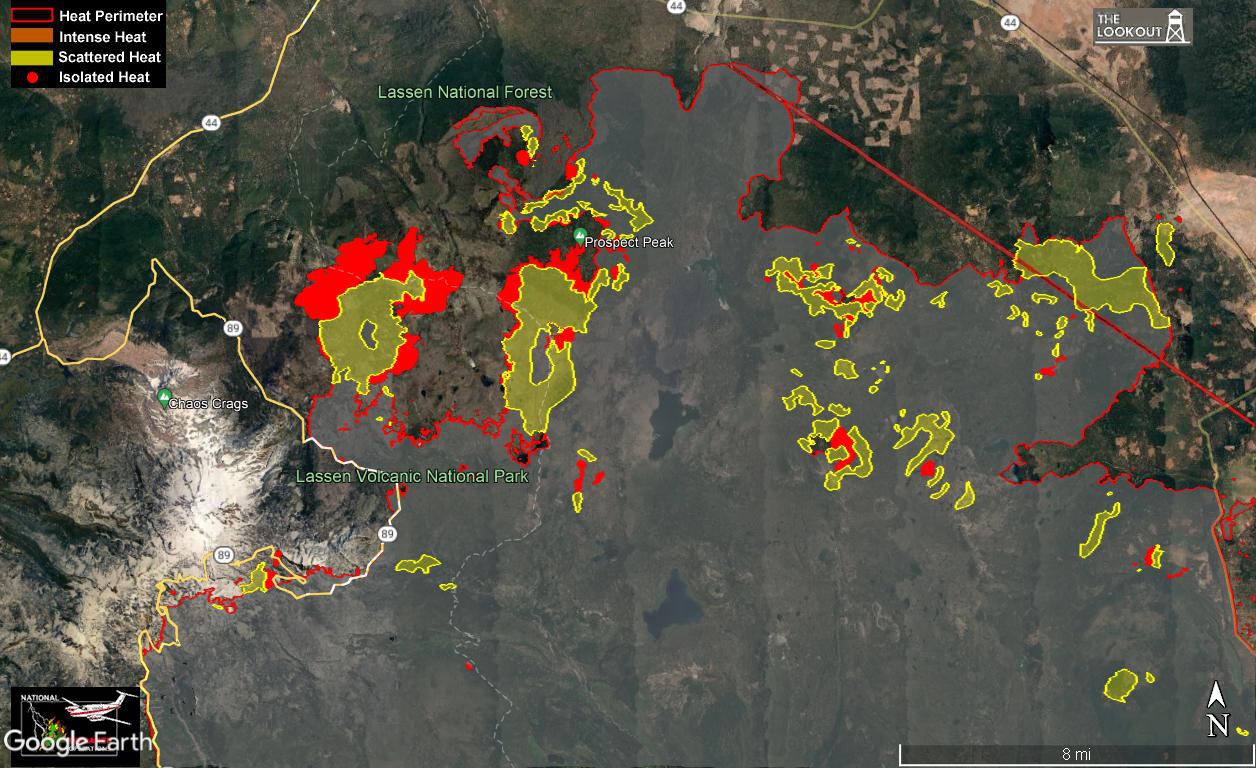 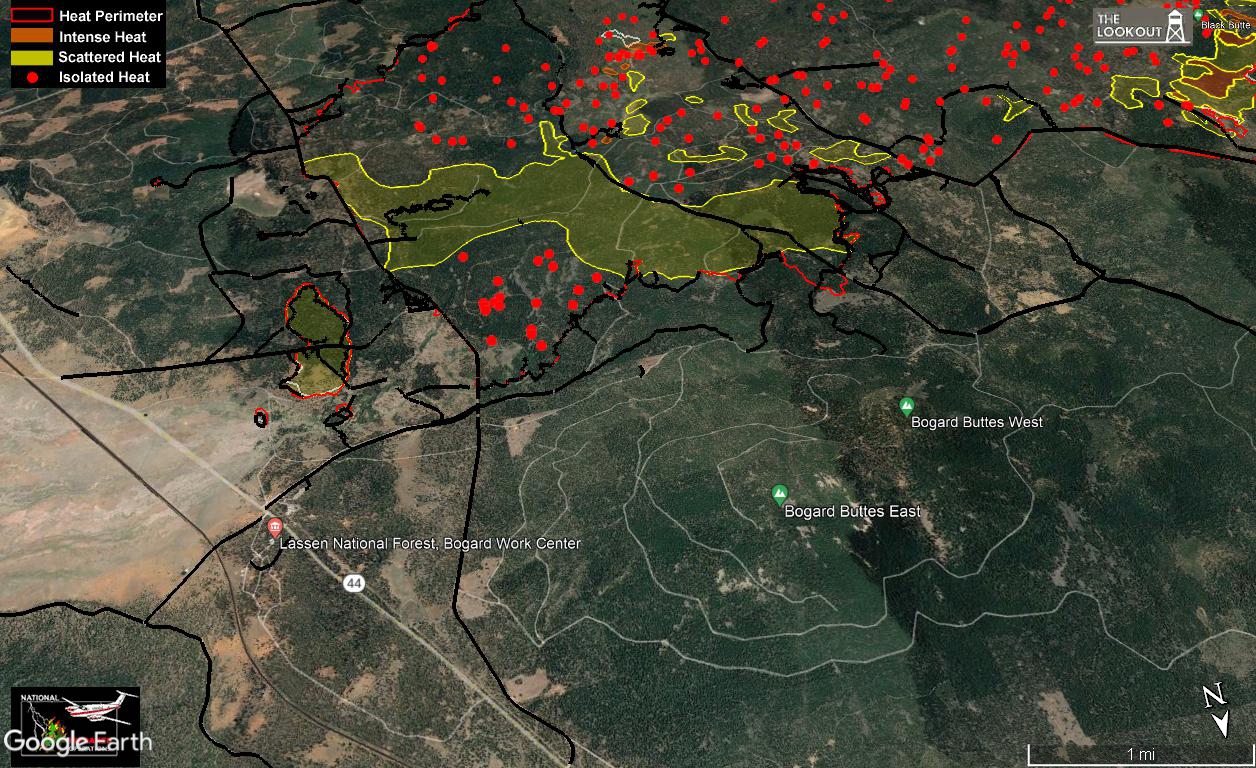 Looking west, south of Bogard. Fire is cooling off here after a over a week of spitting and spotting. 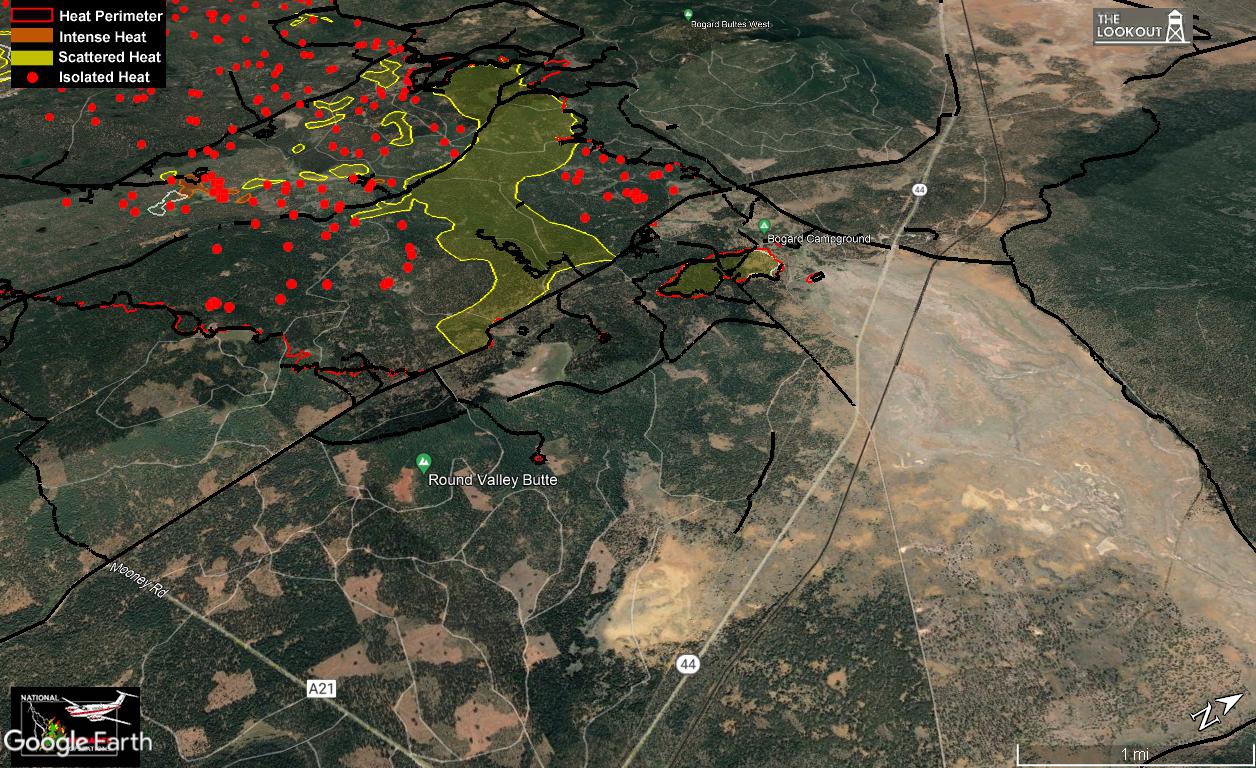 Looking west over Herlong Junction. The fire made it to 395 and was still active last night. 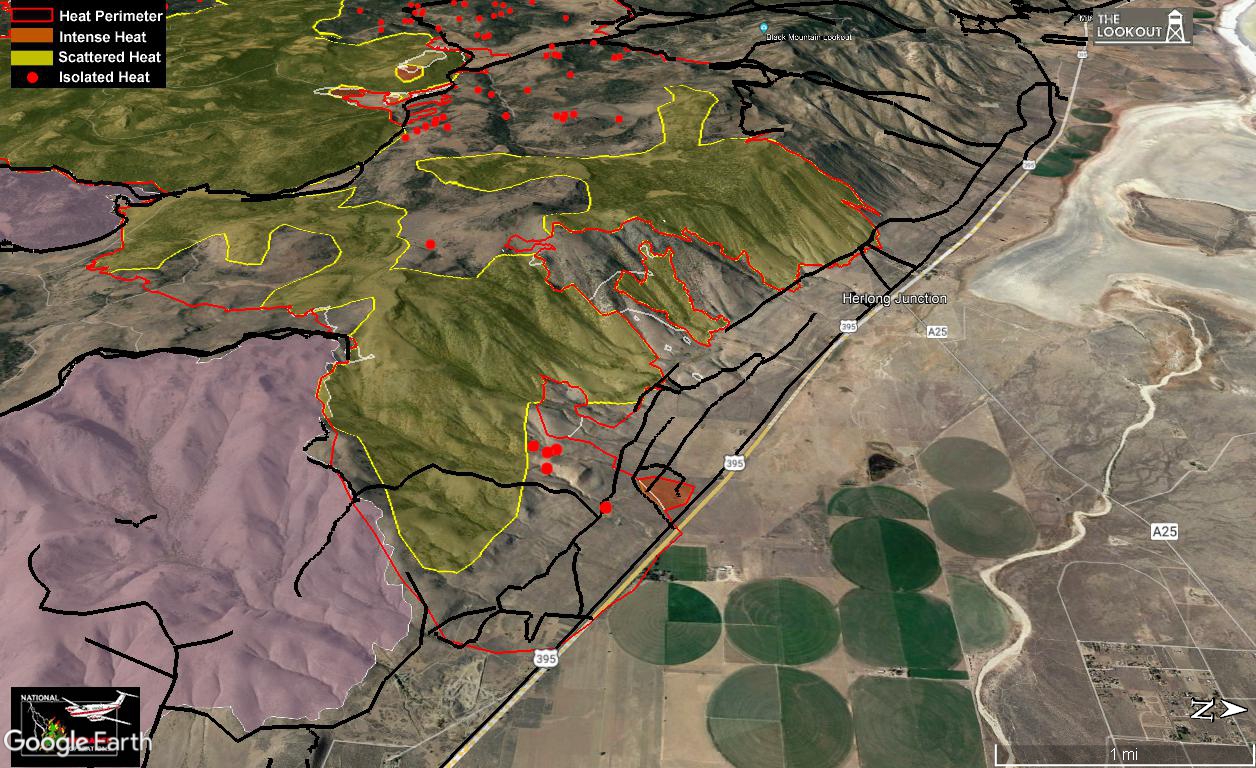 Looking northwest over Beckwourth-Genesee Road. Not a lot of southward spread on the fire here yesterday. Pink is 2021 Beckwourth Complex. 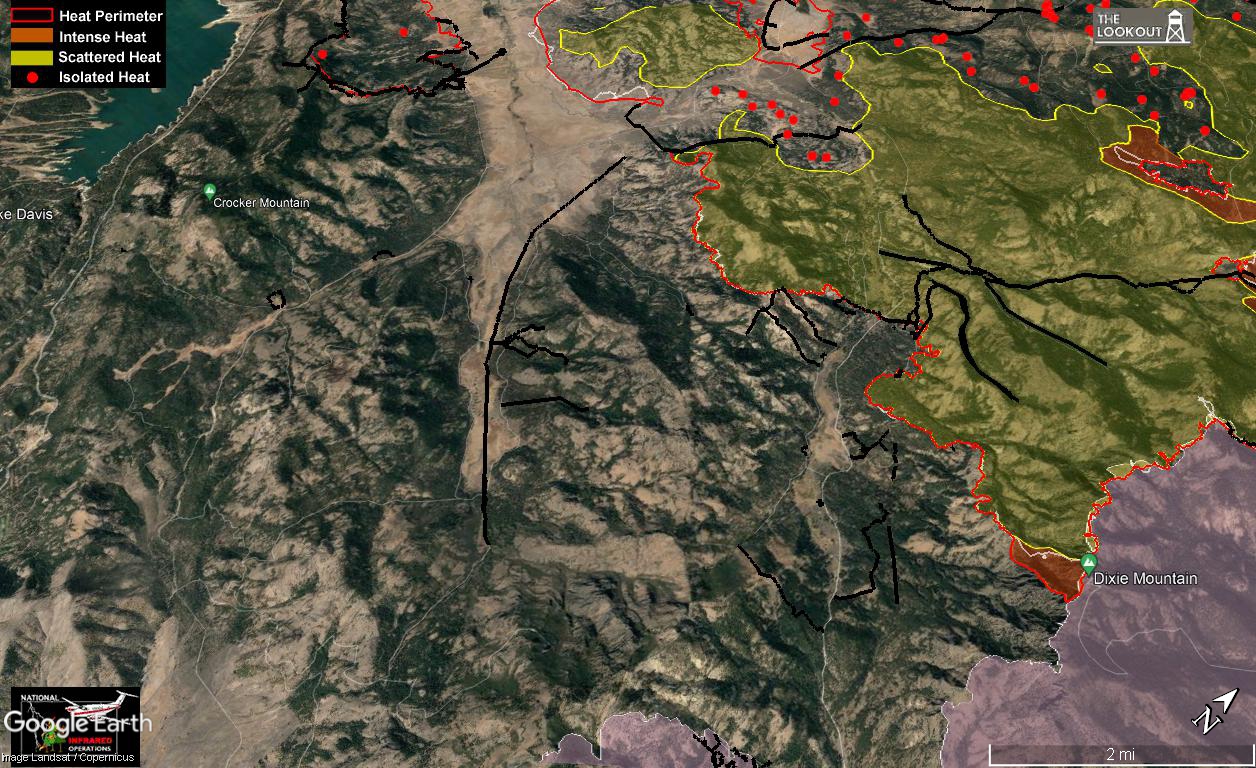 Southeast end of the fire. 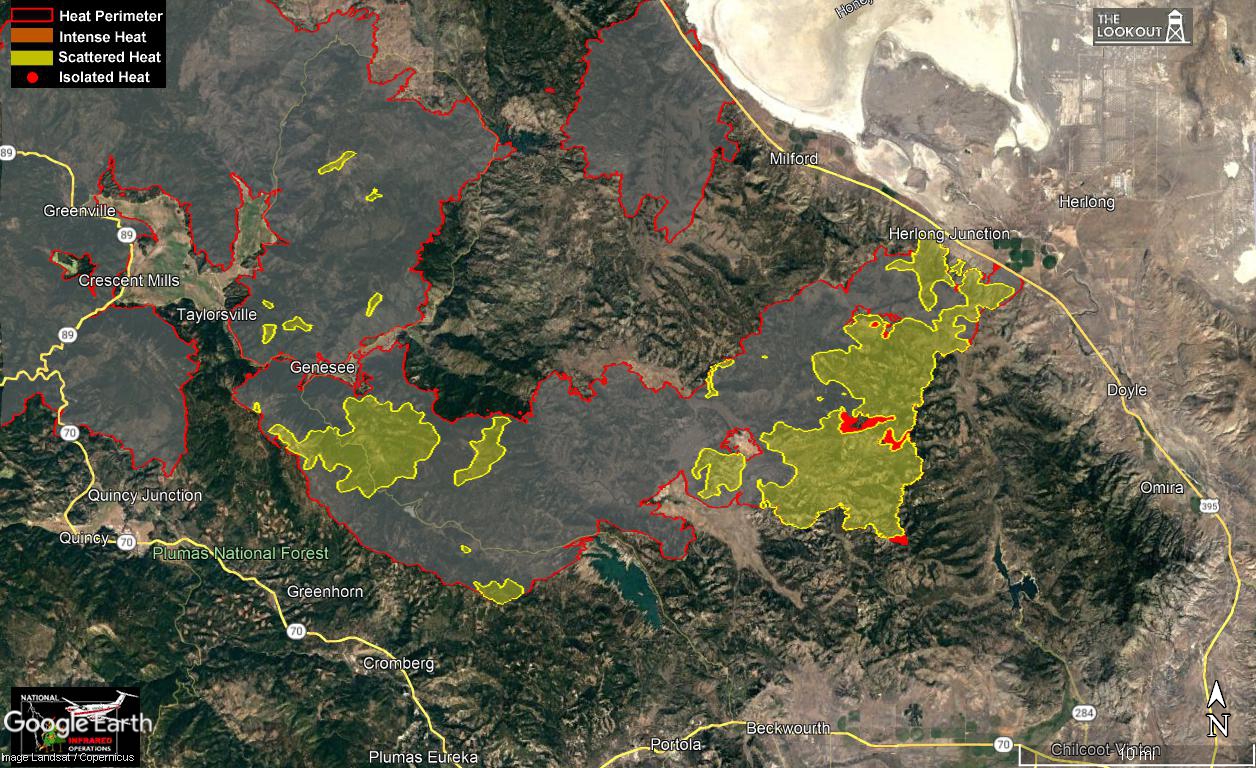