Div A is clearing Paradise Ridge towards General’s Highway (as reported this morning).  Shepard Saddle Roads being improved as well with dozer and retardant line, courtesy of CALFIRE.  Structure protection is ready as far up as Grant Grove, down to Three Rivers and out to Silver City/Mineral King.

As with morning brief, Plan A is exclusion of fire from groves. Plan B is firing off the groves.

The Team expects old fire scars (read Hidden) will be very dry and susceptible to burning.  I concur.

IMET Bailey commented on frontal activity moving in to the Pacific Northwest from British Columbia that could influence local winds starting Saturday into Sunday.  No moisture expected with this front.  National Weather Service’s fronts model from today shows this system over the area on Monday. Forecasts for Noon Saturday and Midnight Sunday attached below.

First image is noon Saturday.  System discussed by IMET over Washington.  My note: High pressure over South Lake Tahoe may cause unusual winds in the Southern Sierra.

Then the system if forecast to progress south towards the Southern Sierra overnight into Sunday.

IMET also noted solar influence on fire, with unshaded areas burning more actively than those shaded by the Windy Column.  My personal note here is the importance of canopy cover in shading ground fuels in this situation.  In combination with frequent Rx burning, I expect a low fire severity to be observed within Gigantea Groves.

Expected three days to complete Shepherd Saddle improvements up through the North Fork of the Kaweah.  Park Resources will be used exclusively in Sequoia Grove protection.  The question of direct attack was brought up and it was explained that there is not enough ground resources to finish a direct attack before forecasted weather changes (explained above).

Based on Visible Infrared Imaging Radiometer Suite (VIIRS) data, Windy appears to have jumped forest road 21S94 and run up Slate Mountain.  An unforecasted south wind drove this part of the Windy hard through the afternoon into the night.  This fire may be slowed as it crests the Slate Ridge, where it will begin working against the terrain and recent burn scars.  Conversely, this expansion of the fire footprint represents a hazard to Camp Nelson, Pierpoint, Ponderosa and the Peppermint Heliport. 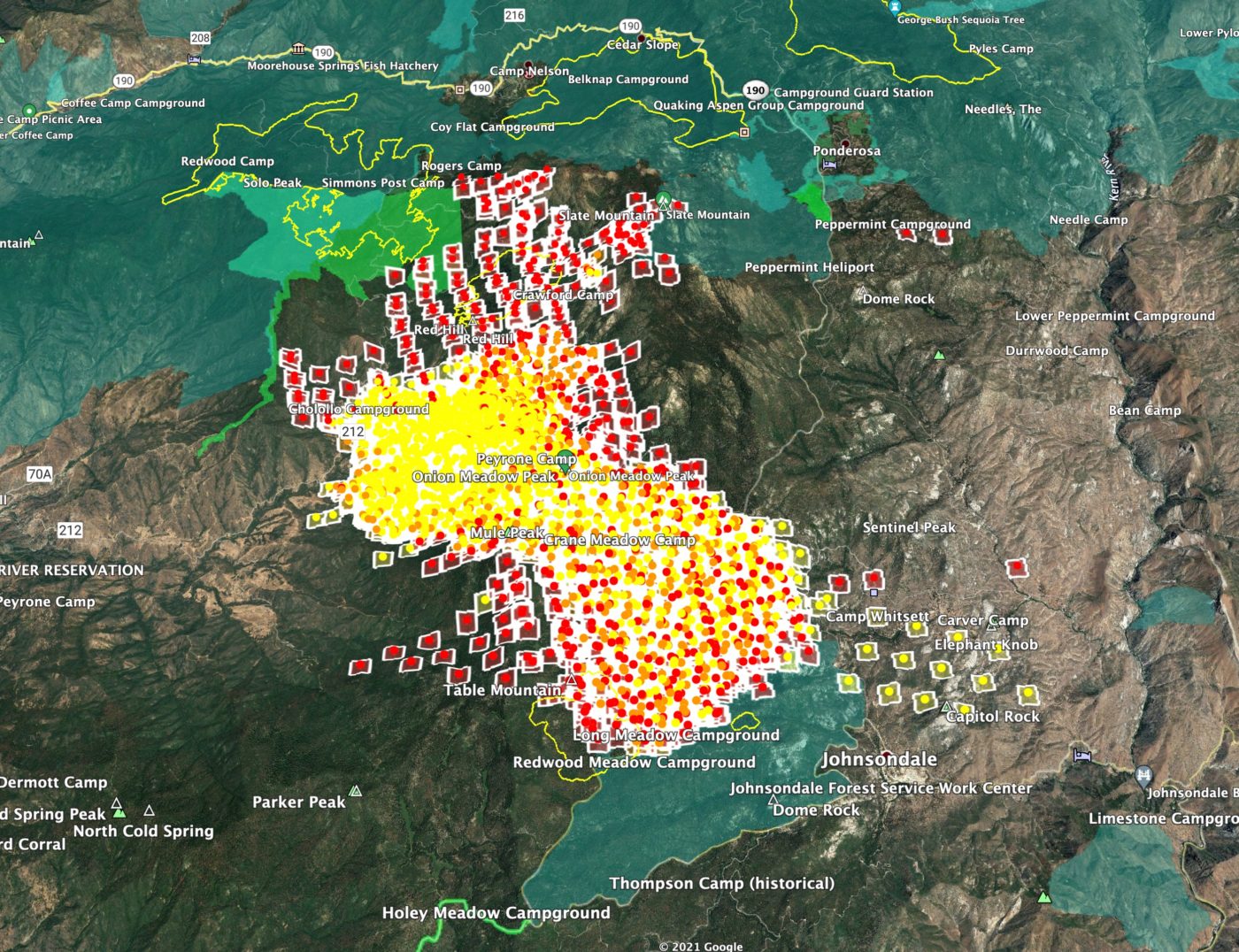 The south wind was favorable to the south east flank of the fire, that was not driven as hard to the west as it would have been under the usual diurnal winds.  See Caltopo screen cap below. Note Green Wind Vector lines.

We are trying a new approach here at The Lookout, reaching out for local knowledge, and getting some help on mapping from our friend Ryan Stephens.

This morning’s map captions come from Ryan’s interpretation of overnight IR heat mapping flights. The longer narratives are from a retired Federal wildland firefighter who is local to the Southern Sierra fires.

KNP Complex
Type 1 IMT SA Blue took over the management of this Complex Thursday evening. They have a realistic stance about the limited availability of resources in the area and are taking a big box approach, using point defense to protect important resources. The bold white line represents the approximate location of the holding line proposed by Friday’s Day Shift Briefing Map. It originates at Ash Mt. (KNP Headquarters) and follows a ridge south up to the Milk Ranch Rd. There the line follows the road to Mineral King. To the North, the plan is to use the road to Shepards Saddle, roughly delineated in bold green. It appears this approach would corral the fire away from front country communities and chase it up into the backcountry, where rocky terrain and cooler temperatures may reduce fire severity. 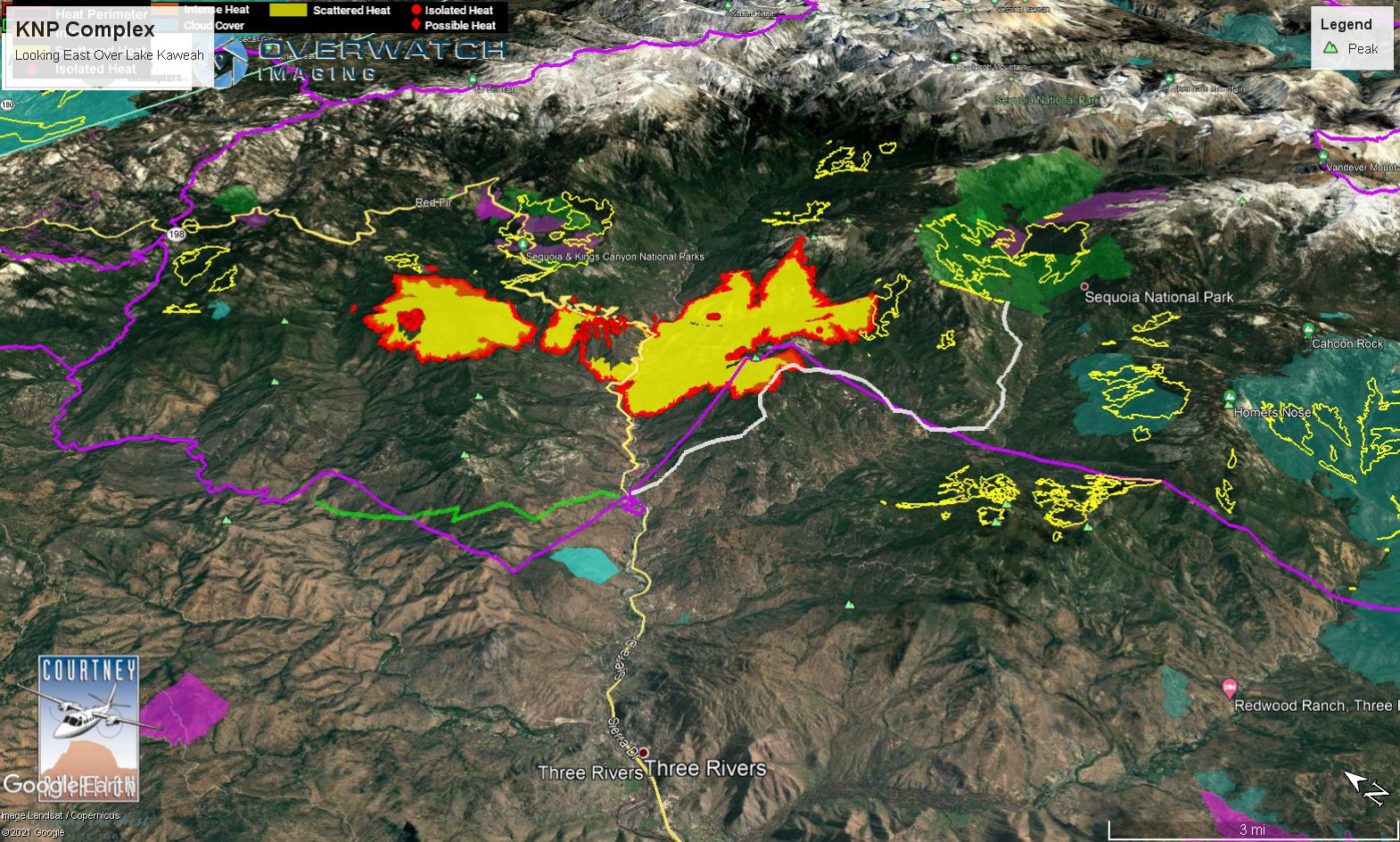 Below are maps of the KNP Complex burning in Sequoia National Park made from infrared data captured at 12:08am on September 17. The two main fires burning in the complex are the Paradise fire to the South and the Colony fire to the North. The white lines show roughly 24 hours of fire spread. 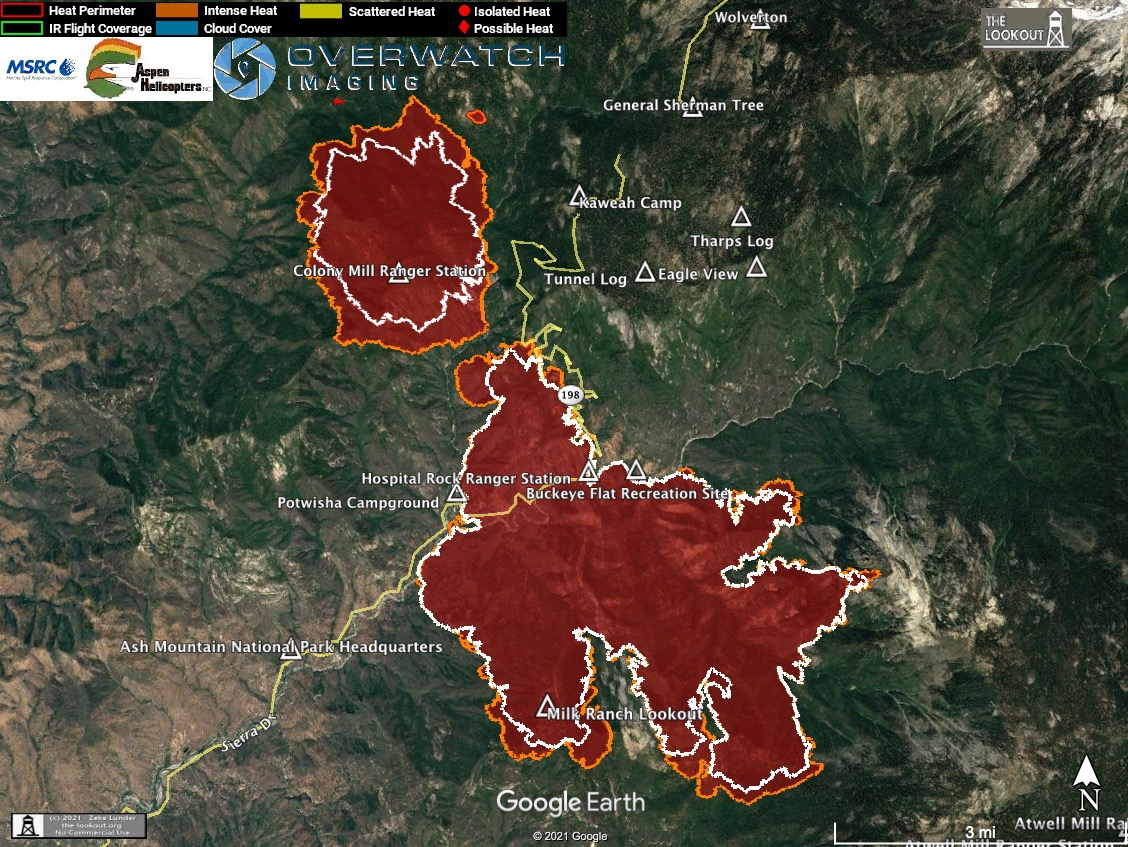 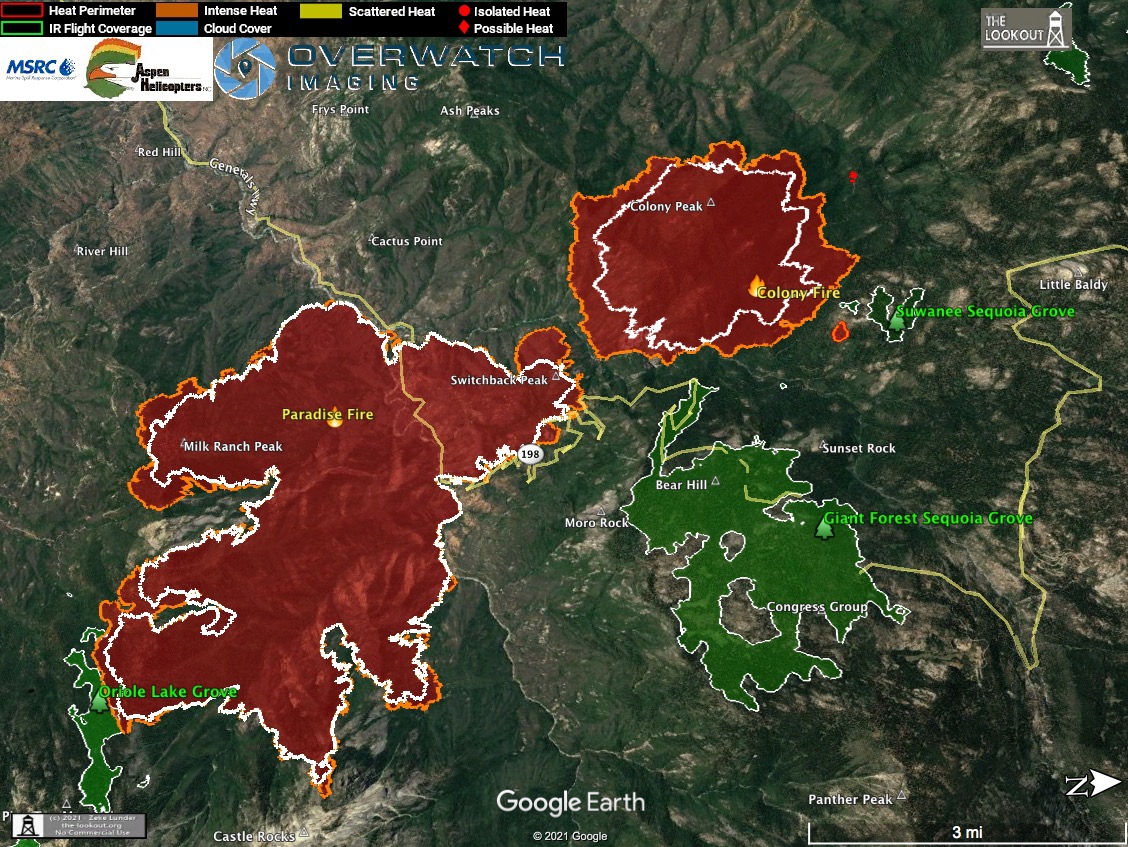 Fire continues to back down all sides of Colony Peak. 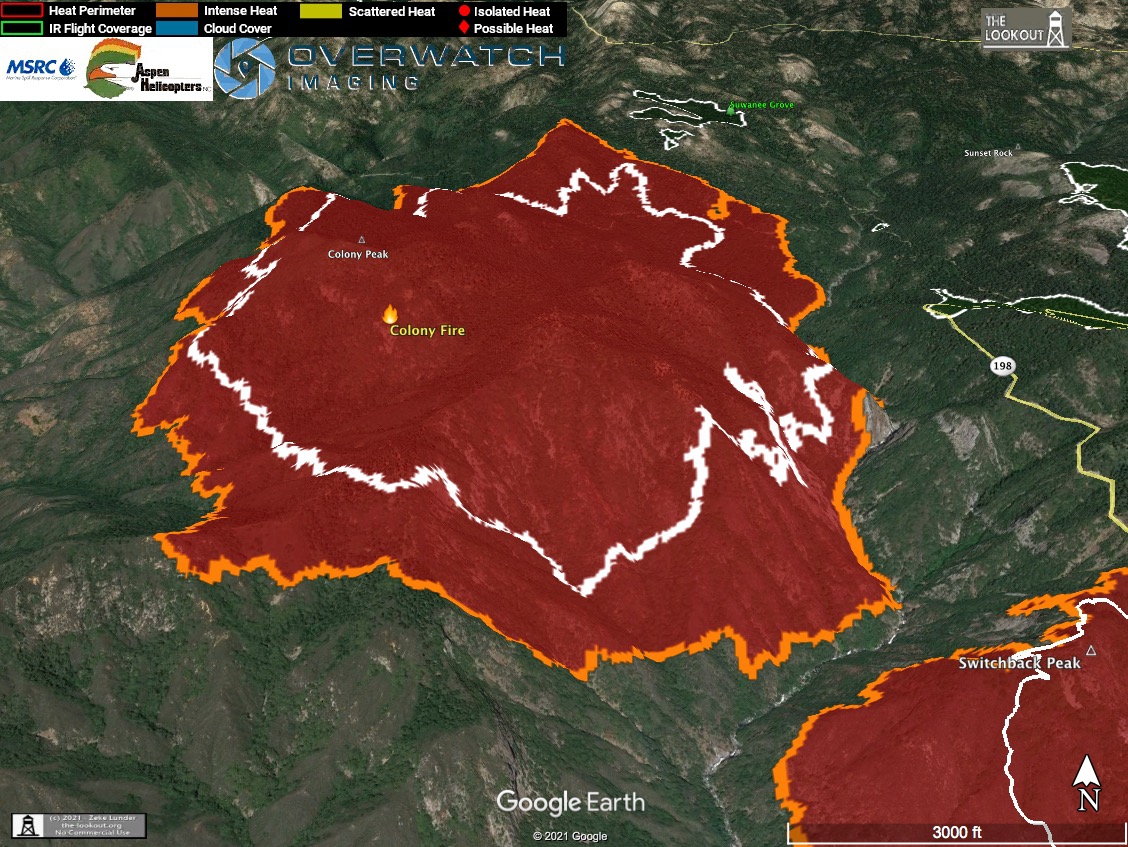 South end of the fire looking North. Fire burned up to the Oriole Lake Grove. 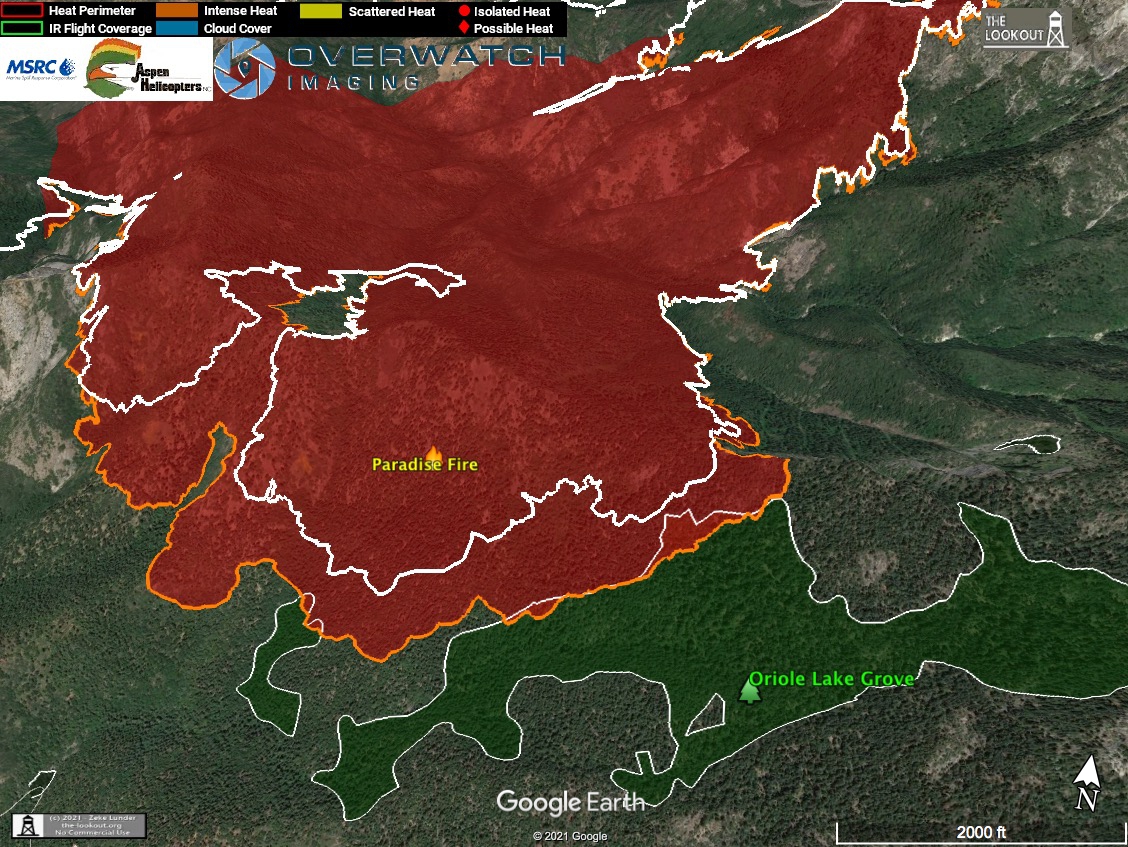 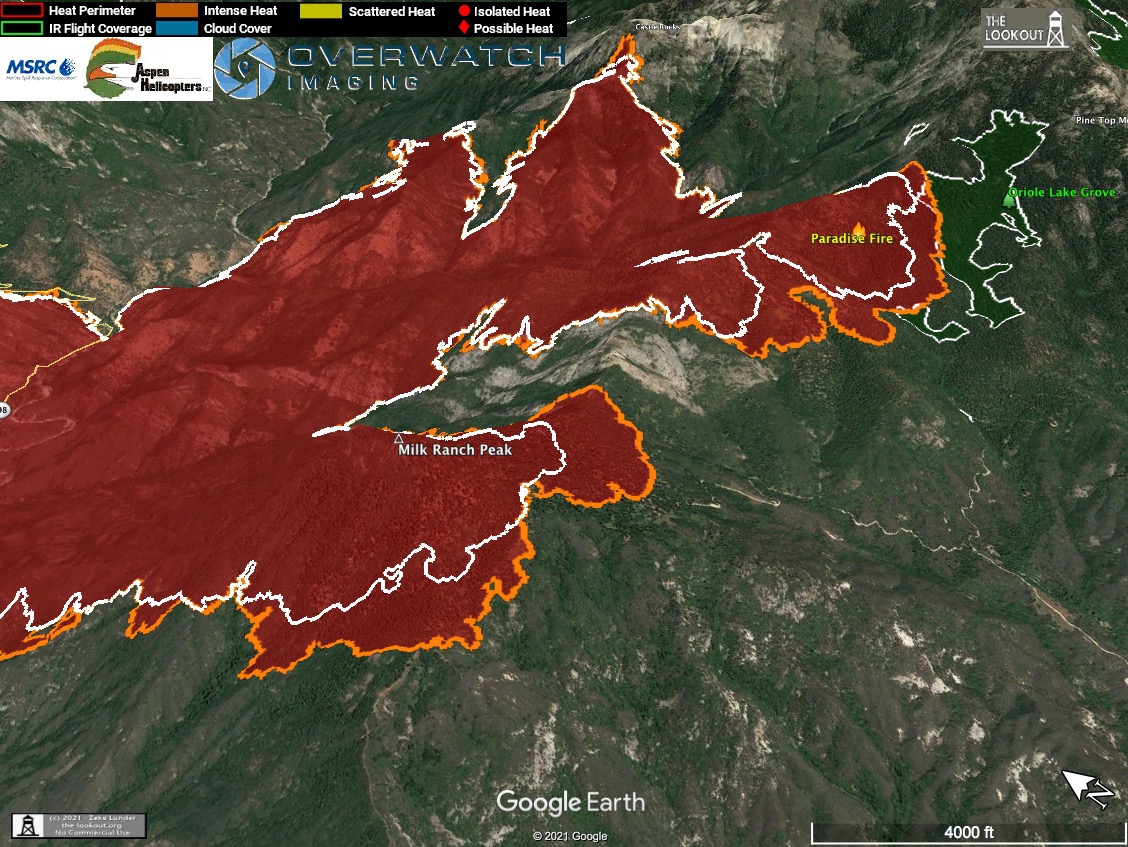 West side of the fire looking East along the General’s Highway. Structures near yesterday’s perimeter appear to still be outside of IR heat. 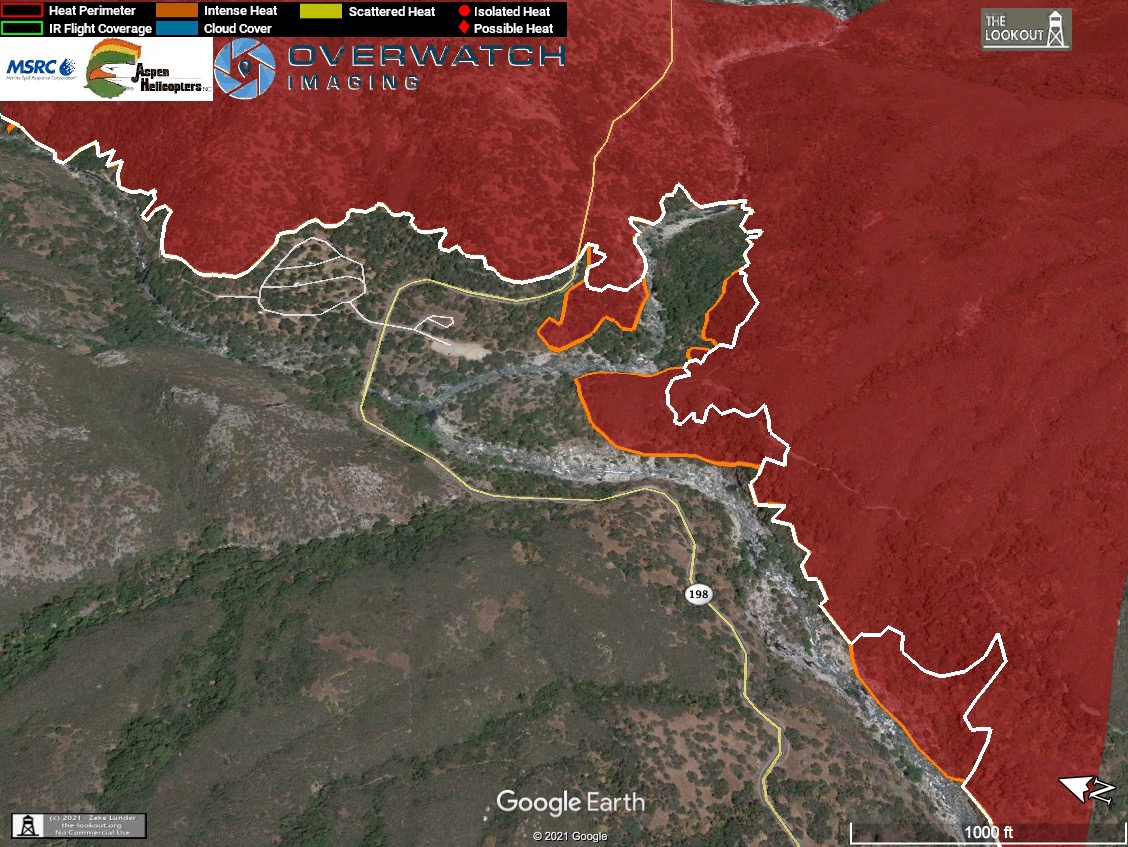 North end of the fire looking South. Fire is backing down Switchback Peak and getting close to joining the Colony Fire. 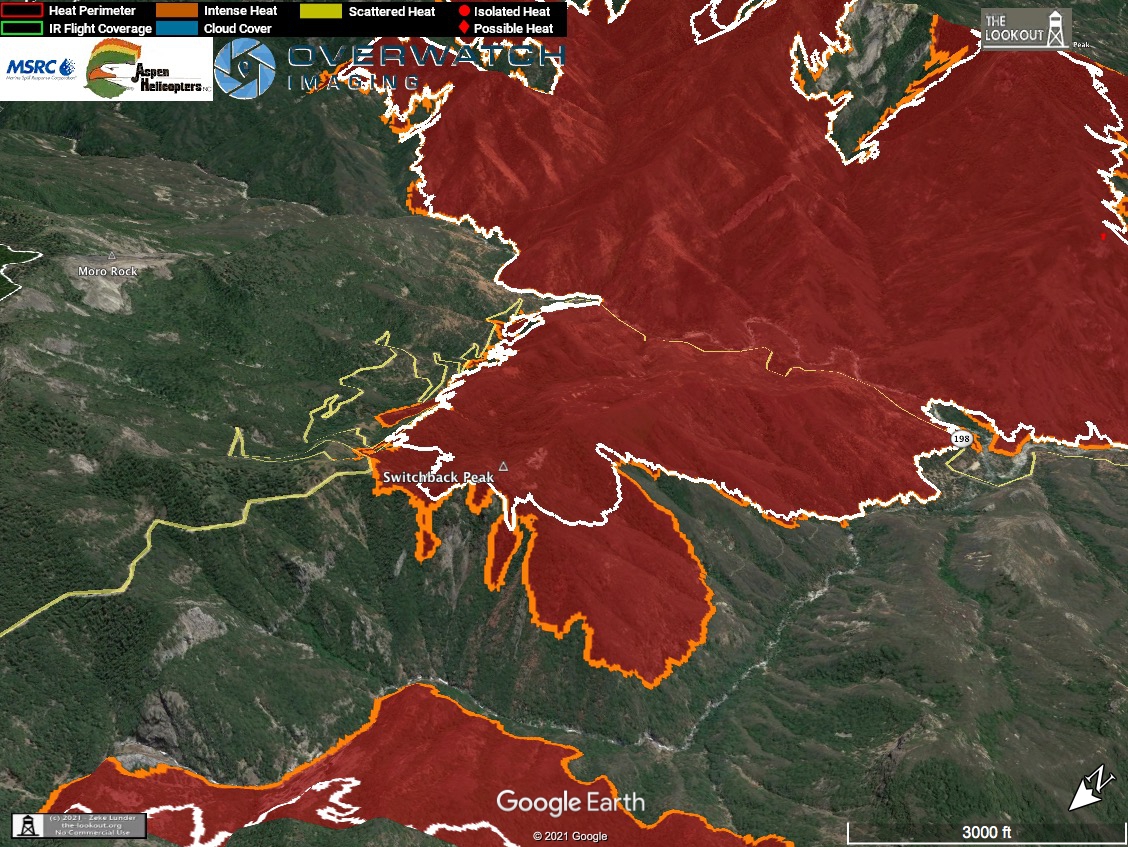 Windy Fire
The Windy, burning on Tule River Indian Reservation, made a strong push overnight to the east along the southeast flank towards the McNally Burn Scar (not on map but roughly apparent as the beige basin starting near Camp Whitsett).  IR shows fire extending into the northern portion of the 2016 Meadow Fire Scar.  It can be expected for spread to slow as the fire crests and works back down hill through rocky fuels.  North of the burn scar and west of Camp Whitsett, expect fire extension due to winds from the west that will be steady in the afternoon, evening.  This aligns with warm and dry times of day, about 3pm to Midnight.   Given spread over the last 24 hours, it can be expected that the Windy reaches the 22S82 (Johnsondale to Camp Whitsett) by Friday night or Saturday Morning.

Along the Northern Flank, a significant finger of fire developed overnight along the Southwest slope of Slate Mountain, along the 21S94.  This finger places fire below unburned fuels along the 21S94 and allows for significant increase in the fire footprint should it cross that road.  This is likely to have occurred by the time of this writing, depending on holding outcomes.

Winds favorable for holding today and firing Saturday morning.  Afternoon west winds may be a problem throughout the week.

Here is mapping from night of September 16. Light blue areas are fires occurring in past five years. Giant sequoia groves are yellow outlines, prescribed burns from past 10 years in green. 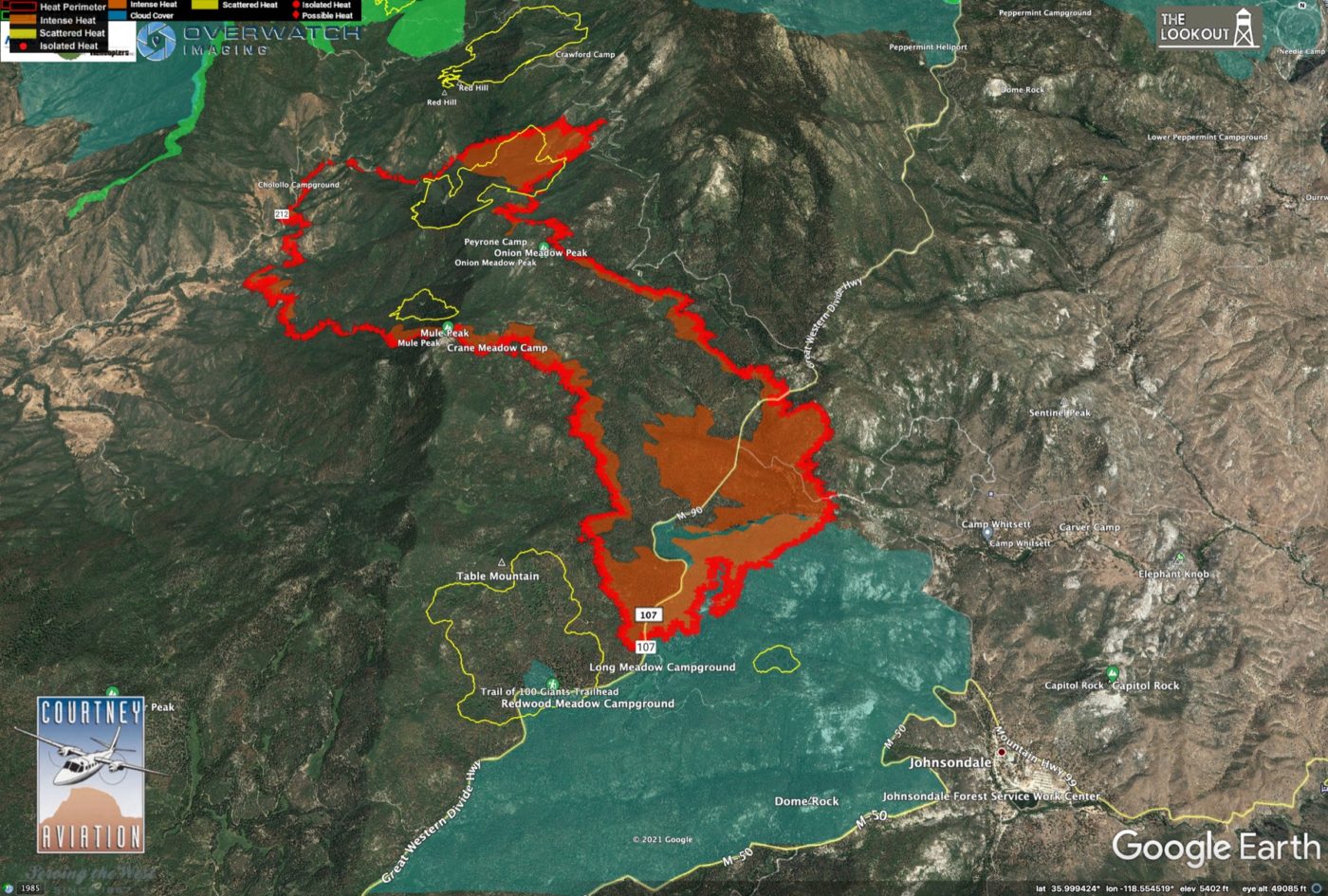 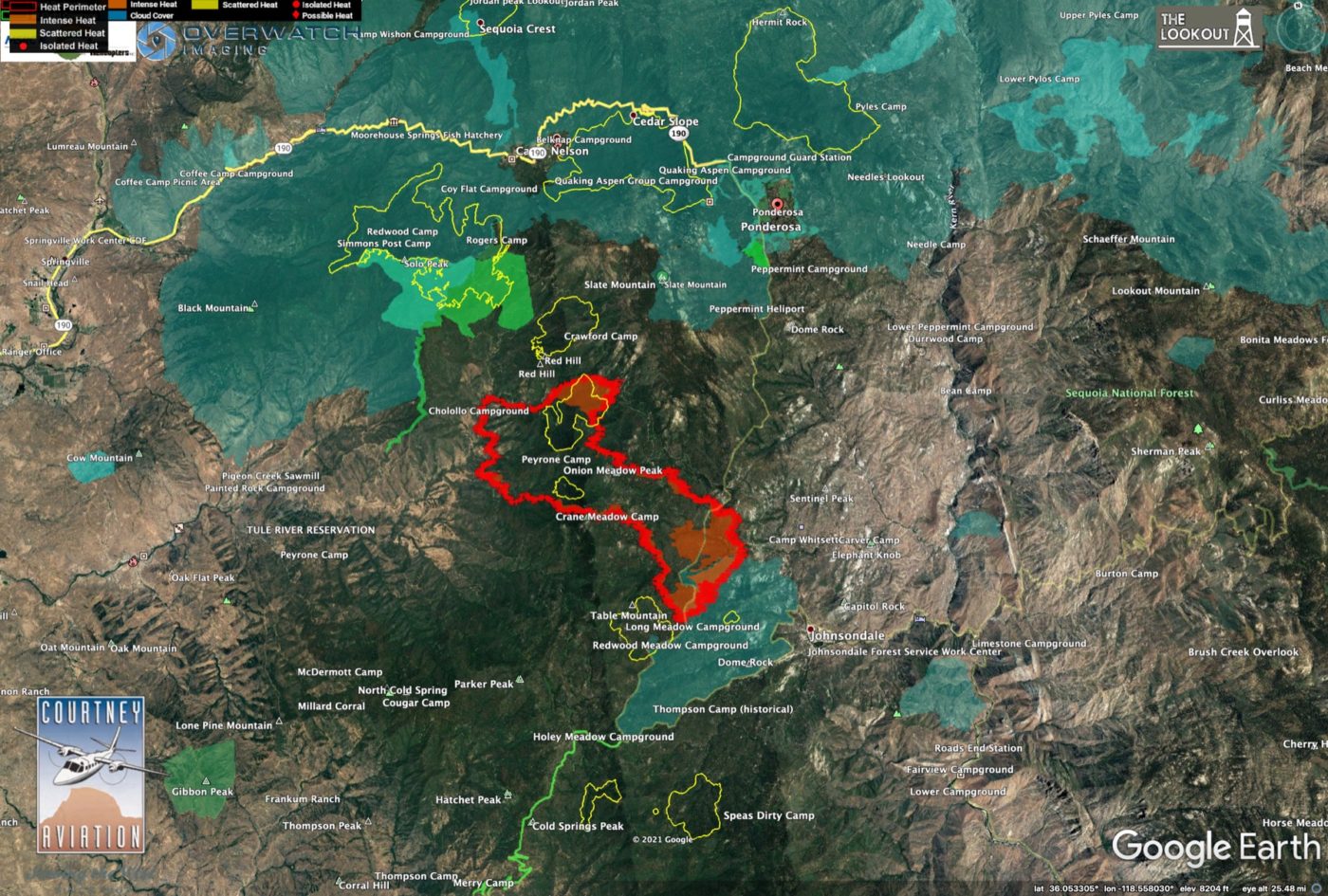 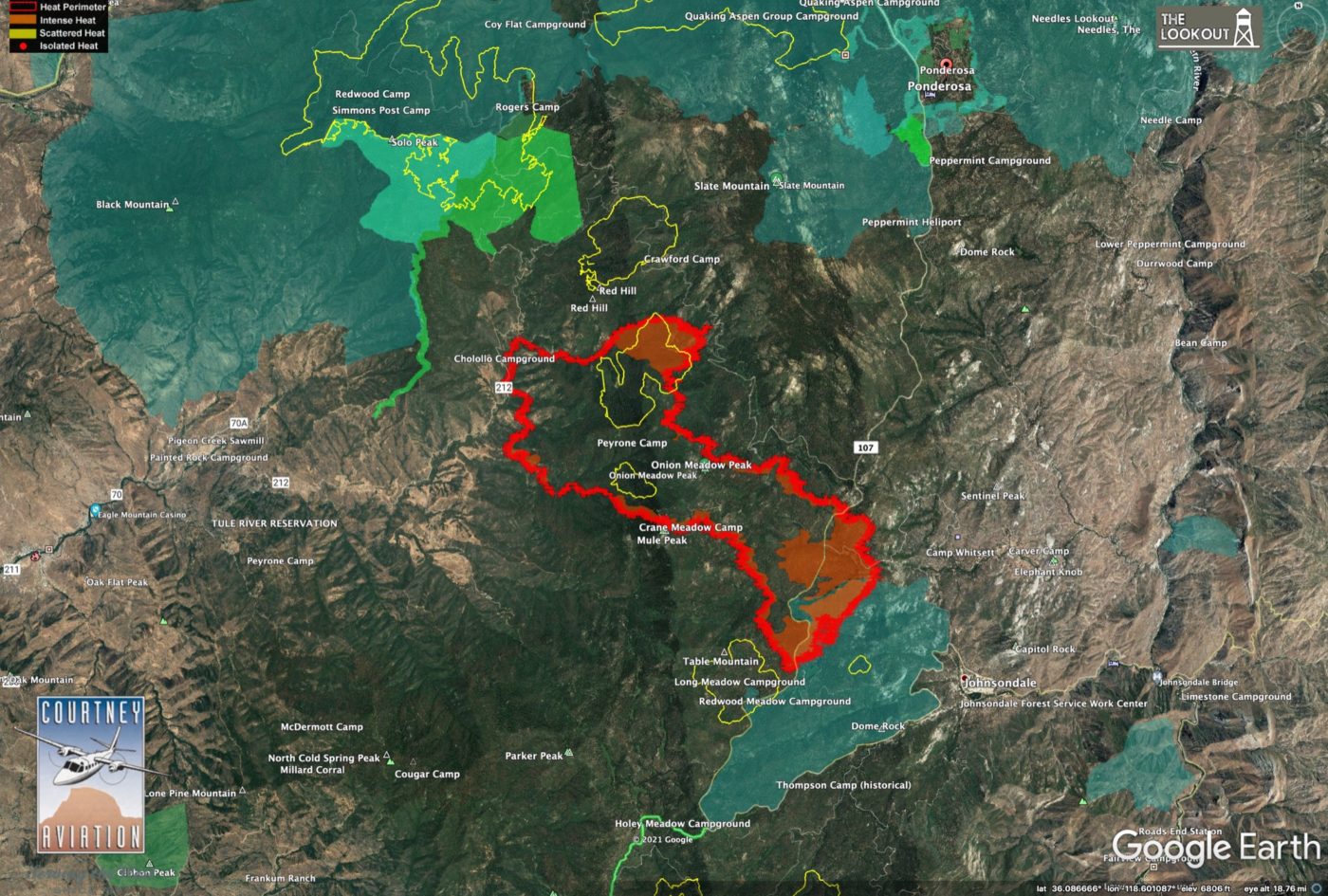 A few more Windy Fire maps from Ryan Stephens, made from infrared data captured at 4:47am on September 17. The white lines show roughly 24 hours of fire spread.

Minimal growth on the western edge of the fire. Most of the action in the last 24 hours was outside of the Tule River Reservation. The Windy Fire moved about two miles to the south/southeast, jumped the Great Western Divide Highway and established itself into the 2016 Meadow Fire footprint. The Long Meadow Grove is now just .2 miles to the West of the fire. 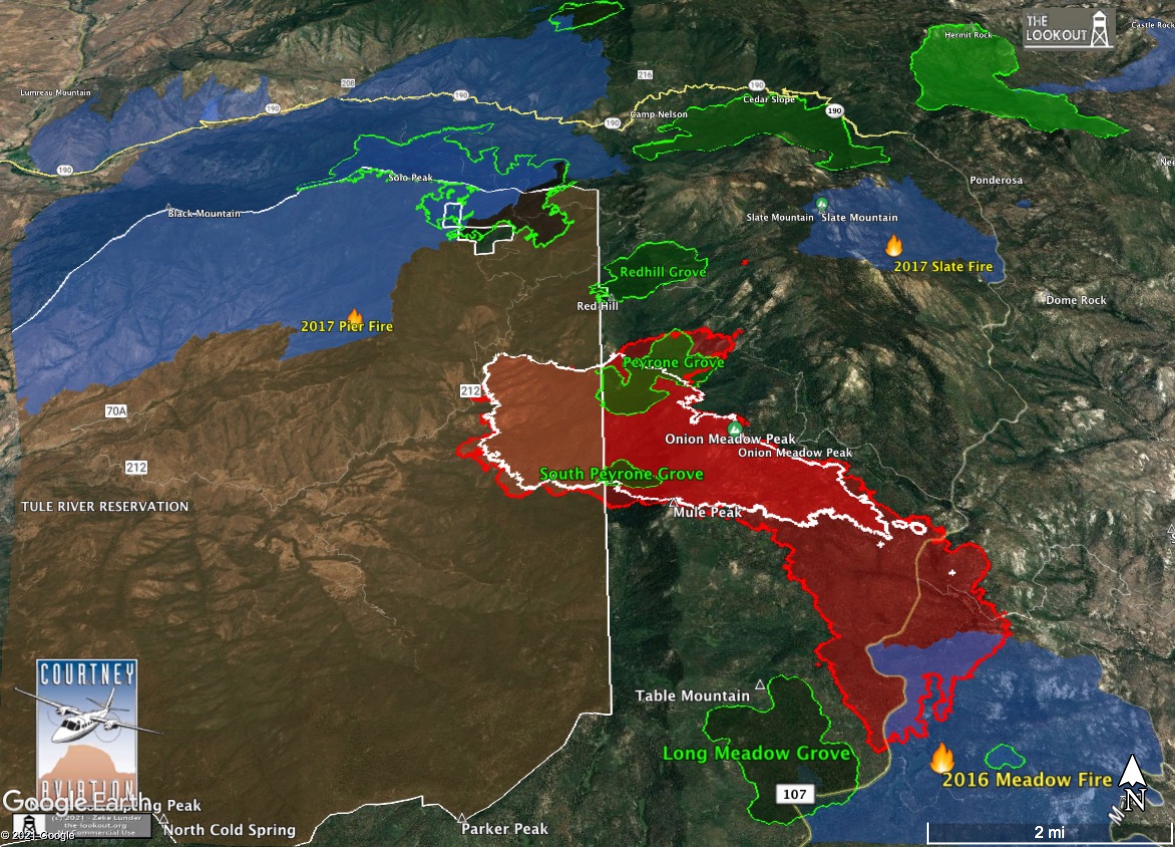 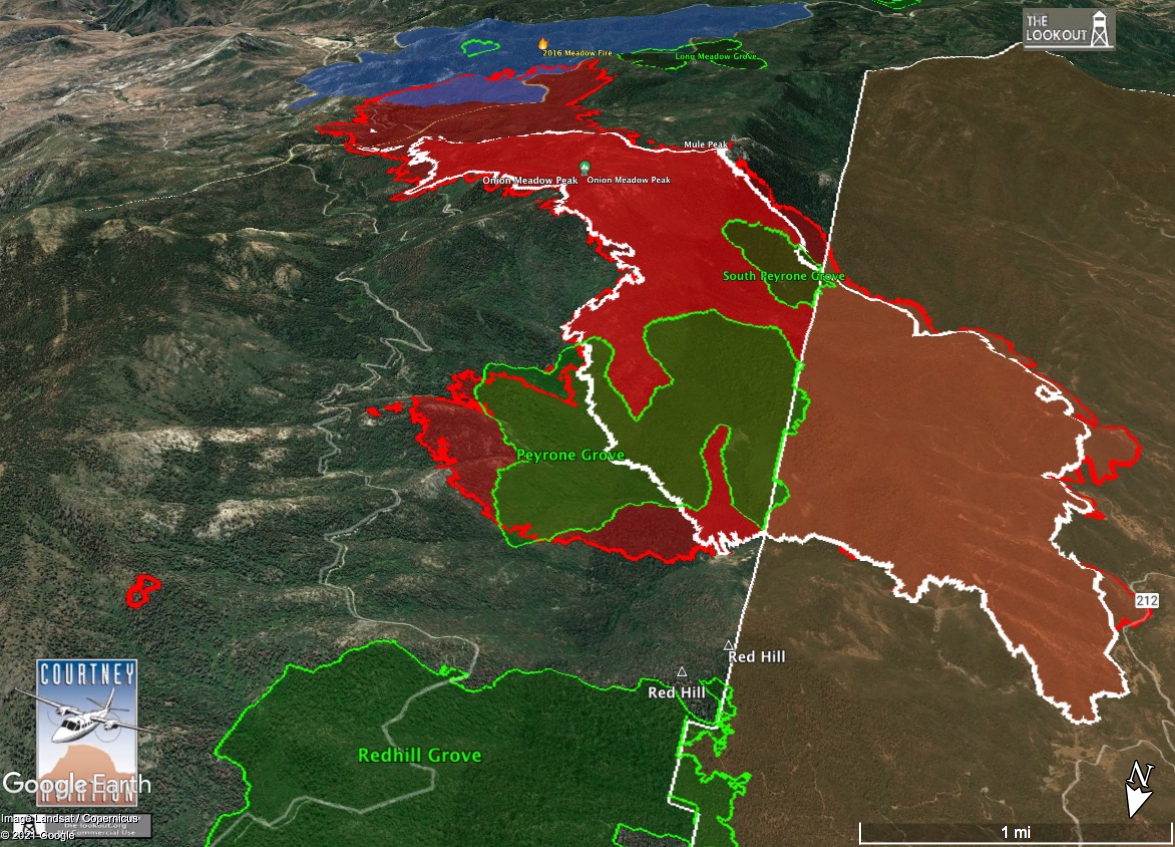