KNP Complex
KNP Complex IR this morning shows a major extension of the Colony Fire (both fires are well joined at this point) up through Marble Canyon.  Then over the Generals Highway, impacting Red Fir and Wuksachi.  Ash Mountain RAWS shows that the usual down slope, down canyon winds – which suggests this fire extension was working against the wind.  The topography of Marble Canyon above Marble Falls does give some explanation, however I feel there must have been some other event that allowed for plume dominated spread in this  area.

On the Paradise side,  IR shows less extension overnight.  I would watch for further updates from the fire fighting effort as to the status of the Paradise Ridge Line up to Milk Ranch Rd. 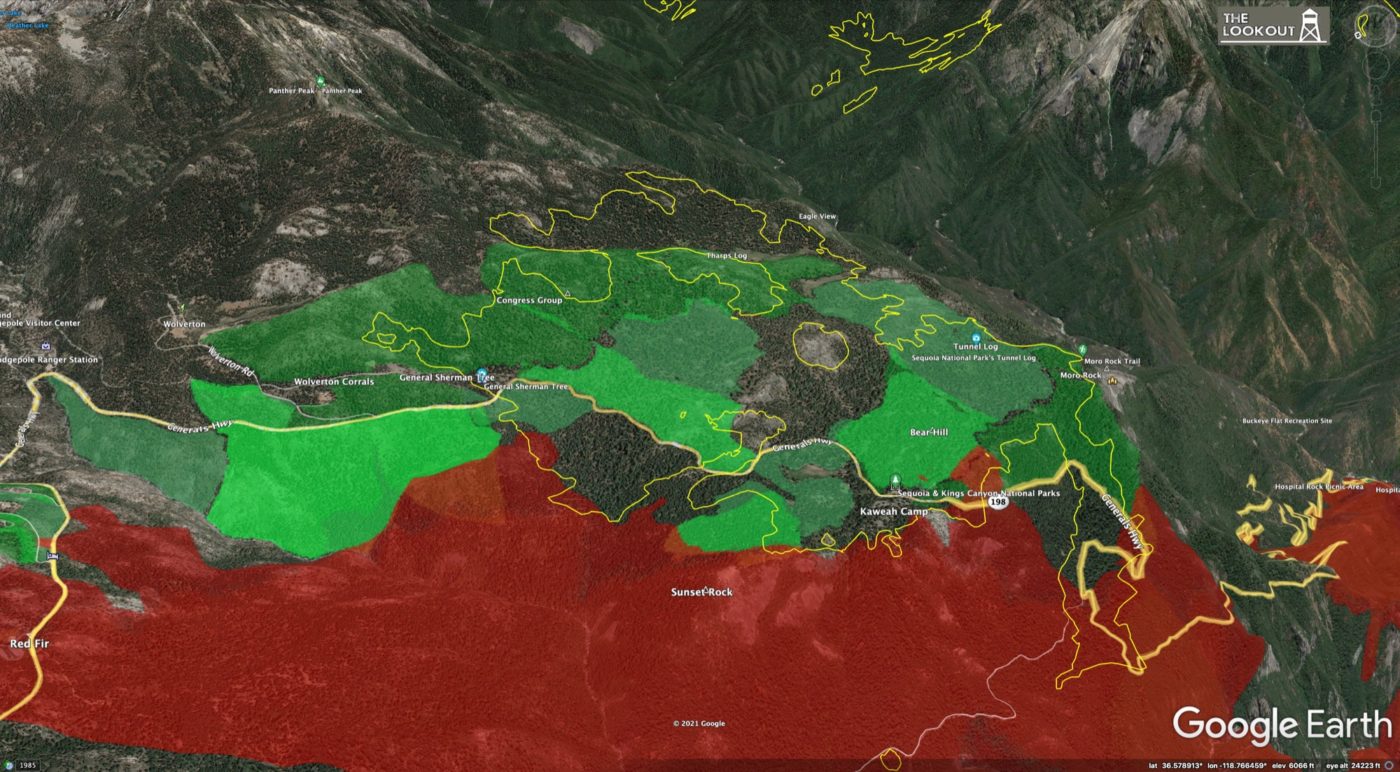 Maps from Ryan Stephens
Below are maps of the KNP Complex burning in Sequoia National Park made from infrared data captured at 11pm on September 17. The Paradise and Colony fires have merged down in the Marble Fork Kaweah River drainage. White lines show yesterday’s perimeter, everything outside of that is fire spread from the last 24 hours. Green lines are Giant Sequoia Groves and blue lines are prescribed fires (Rx) within the last 10 years.

From the west side of the KNP looking East. Most of the action in the last 24 hours has been to the north and northeast. The KNP made a big run yesterday, spreading about 3 miles to the north and east, flanking the edge of the General’s Grove and crossing the General’s Highway just west of both the Red Fir and Wuksachi Lodges. The head of the fire sent spot fires well ahead, including one spot nearly three miles north, over Little Baldy, near where Dorst and Cabin Creek cross the highway. 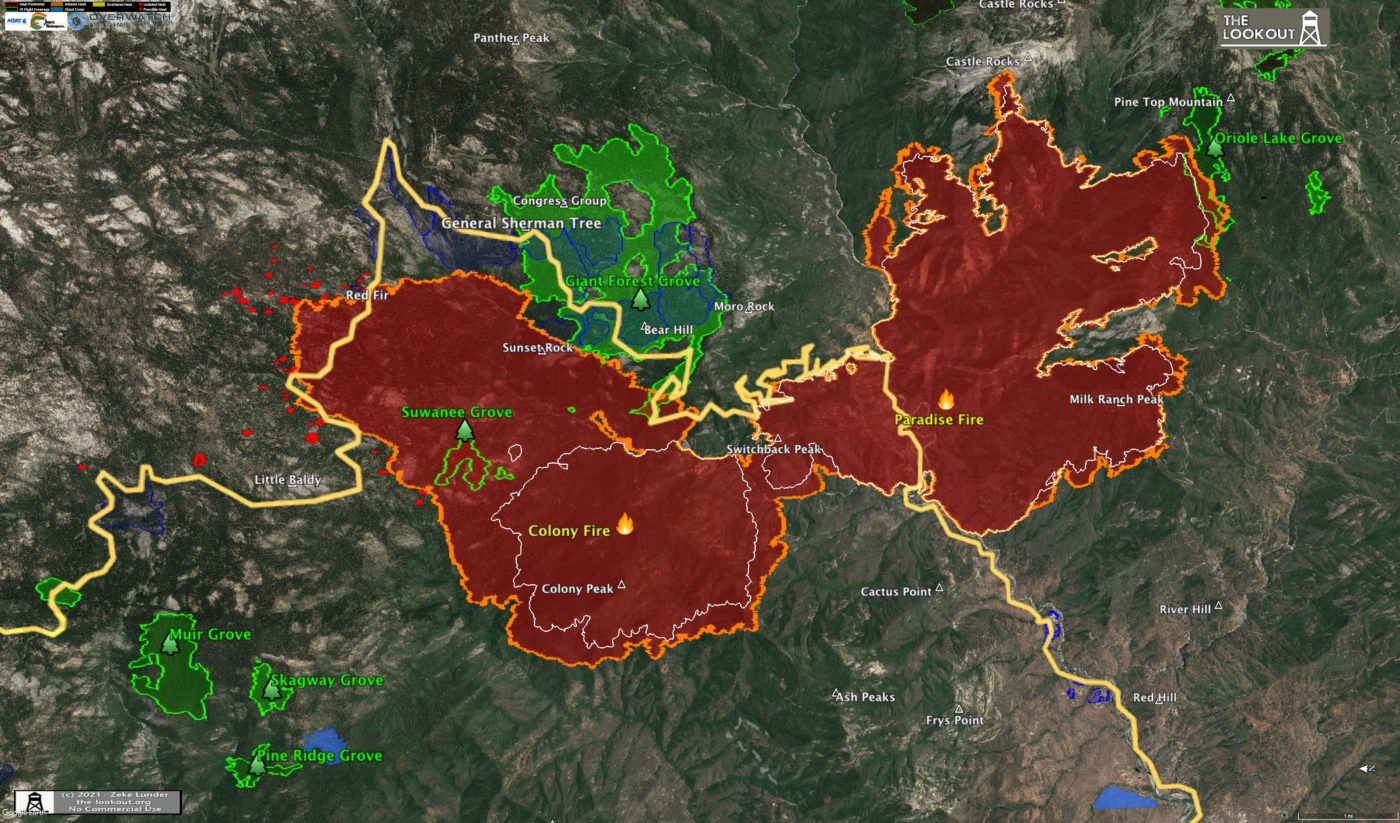 Looking northeast toward the Red Fir and Wuksachi Lodges. 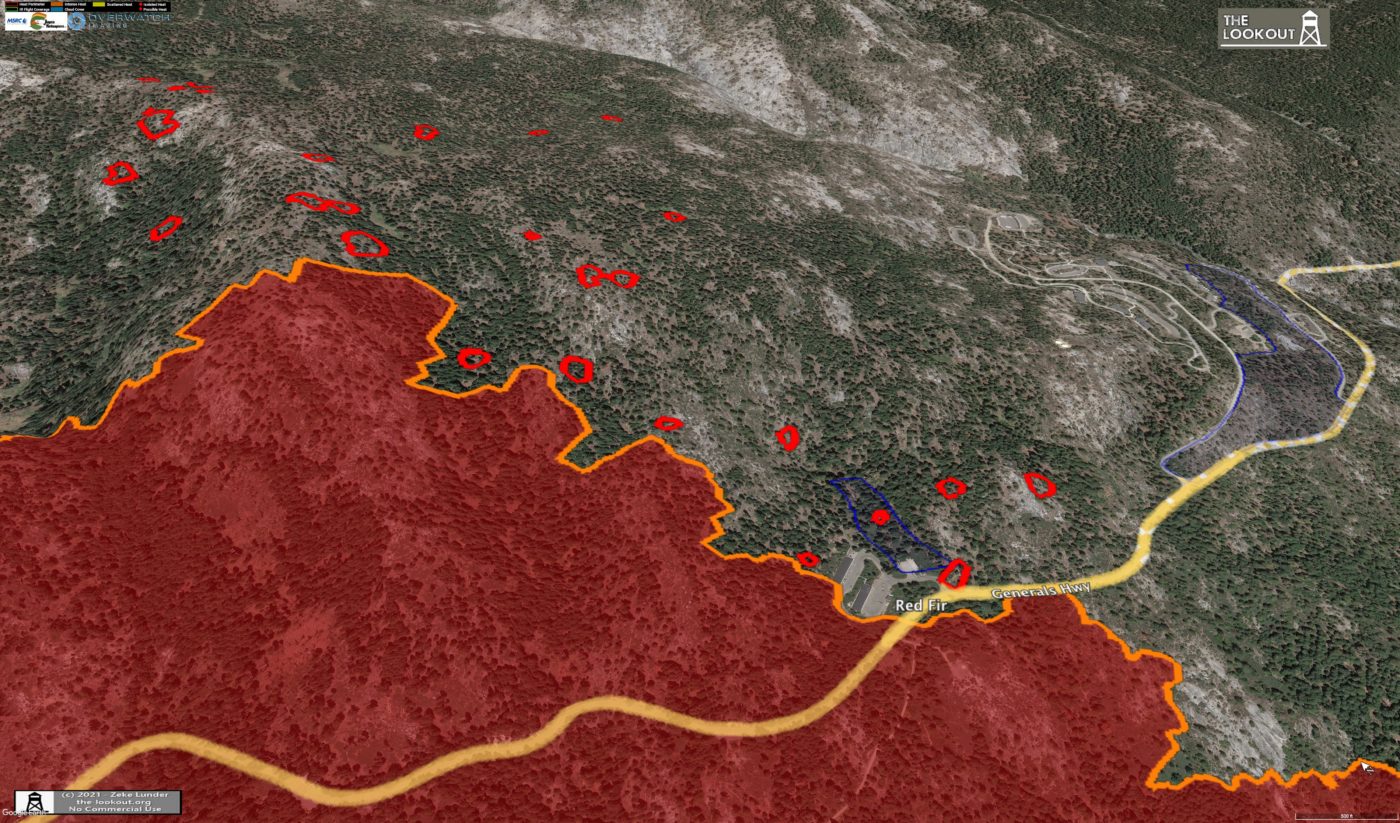 Looking west. Wuksachi Lodge in the bottom left corner and spot fire near Dorst and Cabin Creek in the upper left. 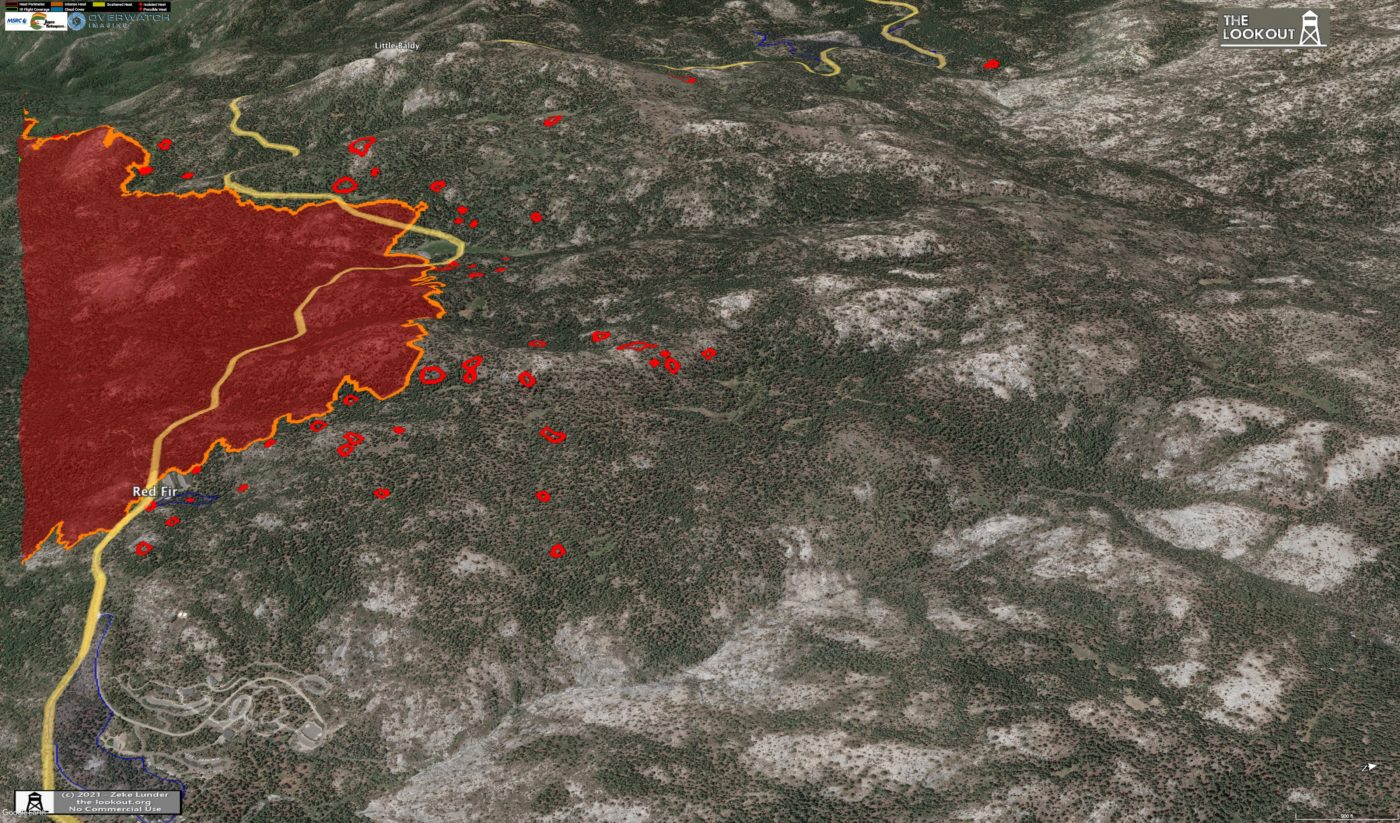 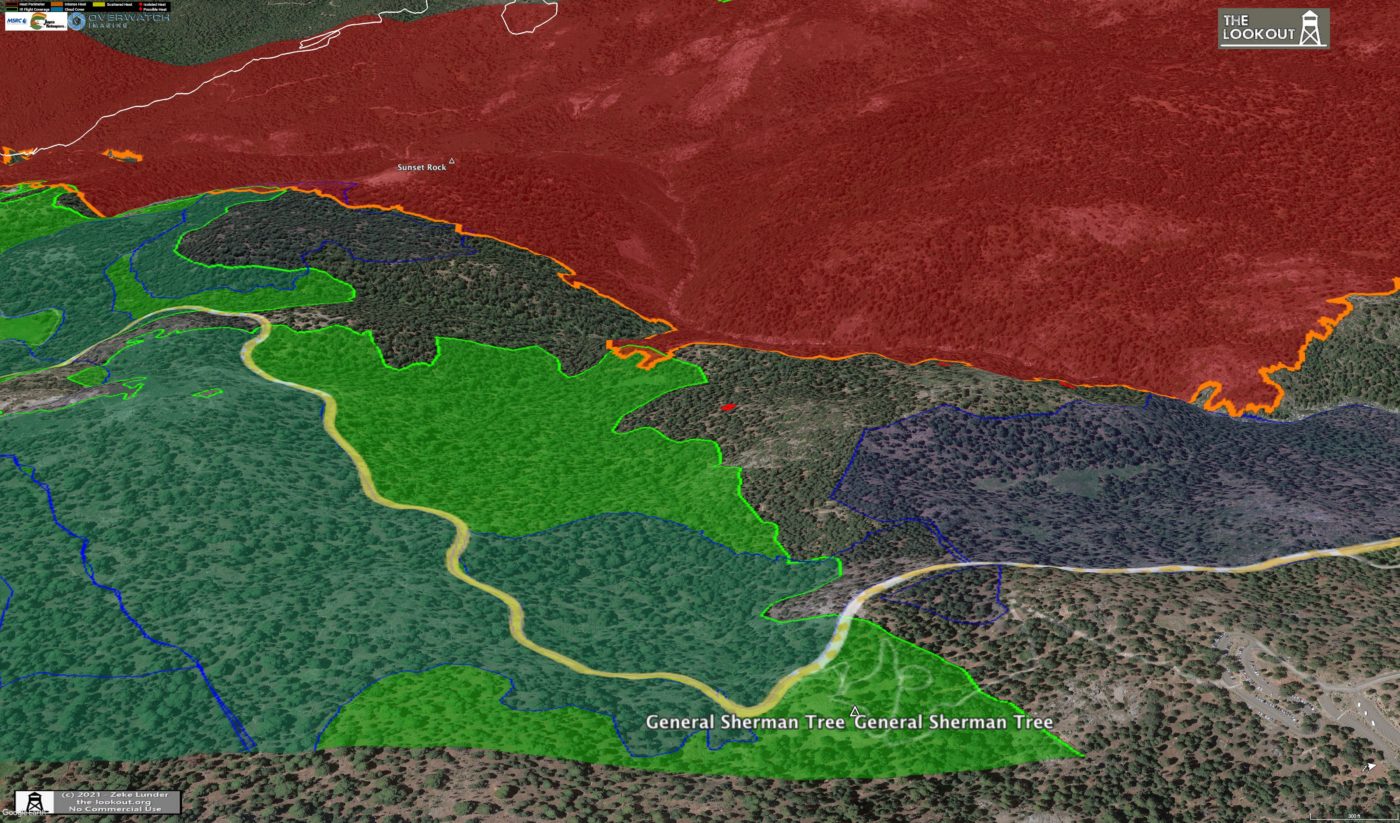 Windy – Chuck Erwin
A sturdy south wind got the Windy well over the 21S94 road yesterday.  IR from this morning shows that the fire has covered much of the southwest face of Slate Mountain.  Here it will begin to interact with recent wildfire burn scars.

Growth towards Johnsondale and Camp Witsett has been slow.  This may be due to the south winds, but may also be influenced by the 2016 Meadow Burn Scar.

winds through the evening in Tulare and Kern Counties. This will result

in elevated fire weather concerns today in those aforementioned areas.

On Sunday, a strong cold front move through the district. This will

throughout the Sierra and Kern County. Temperatures will trend down

Windy Fire Commentary from Ben Munger
On September 17, overshading from the Windy Fire lowered temps at least by 10 degrees.  The column at first was a little northwest, then late in the day trended directly north and was very dark in the late afternoon as it mixed with clouds streaming in from the southwest.

The Great Western Divide Highway (M107) is a substantial two lane road built as a Scenic Byway.  Some “daylighting” work has been done recently by the Porterville Organized Crews, but it was not substantial and only cleared hazard trees.  There has been intentional work done burning around the Trail of 100 Giants and hopefully it will be enough, but as the IC mentioned in the video last night, most of the area has not seen fire in 150 years.

East and downslope of the Great Western Divide Highway towards Johnsondale, the vegetation transitions to a more mixed dry conifer/black oak and shrub dominated area. Below Johnsondale vegetation is true chaparral. Granite domes provide some bare ground to anchor into as Mountain Road 50 curves down into Johnsondale.

Ponderosa residents are grateful for their community being protected last year during the Castle Fire and the Ponderosa Lodge has been cooking for fire crews on the Walkers Fire and for the crews staged from last week’s fire bust. Having the Peppermint Helitack Base close by to Ponderosa is a strong link in the mountain communication chain.

Windy Maps from Ryan Stephens
Below are maps of the Windy Fire burning in Sequoia National Park made from infrared data captured at 9:30pm on September 17. The white lines show roughly 24 hours of fire spread. Tule River Reservation is shaded BROWN, Giant Sequoia Groves are Shaded GREEN, and Last 10 Years of Fire Footprints are shaded BLUE.

NOTE: An IR flight from 9:30am on September 18 shows only minor spread on Windy Fire overnight.

Starting at the south end of the Windy Fire.

Minimal growth on the heal of the fire within the Tule River Indian Reservation. The Windy footprint now completely encompasses the Peyrone Giant Sequoia Grove. The 2016 Meadow Fire footprint at the south end of the fire may be helping to moderate rates of spread on this end of the fire. There’s been minimal spread in the last 24 hours toward Johnsondale south/southeast of the fire. 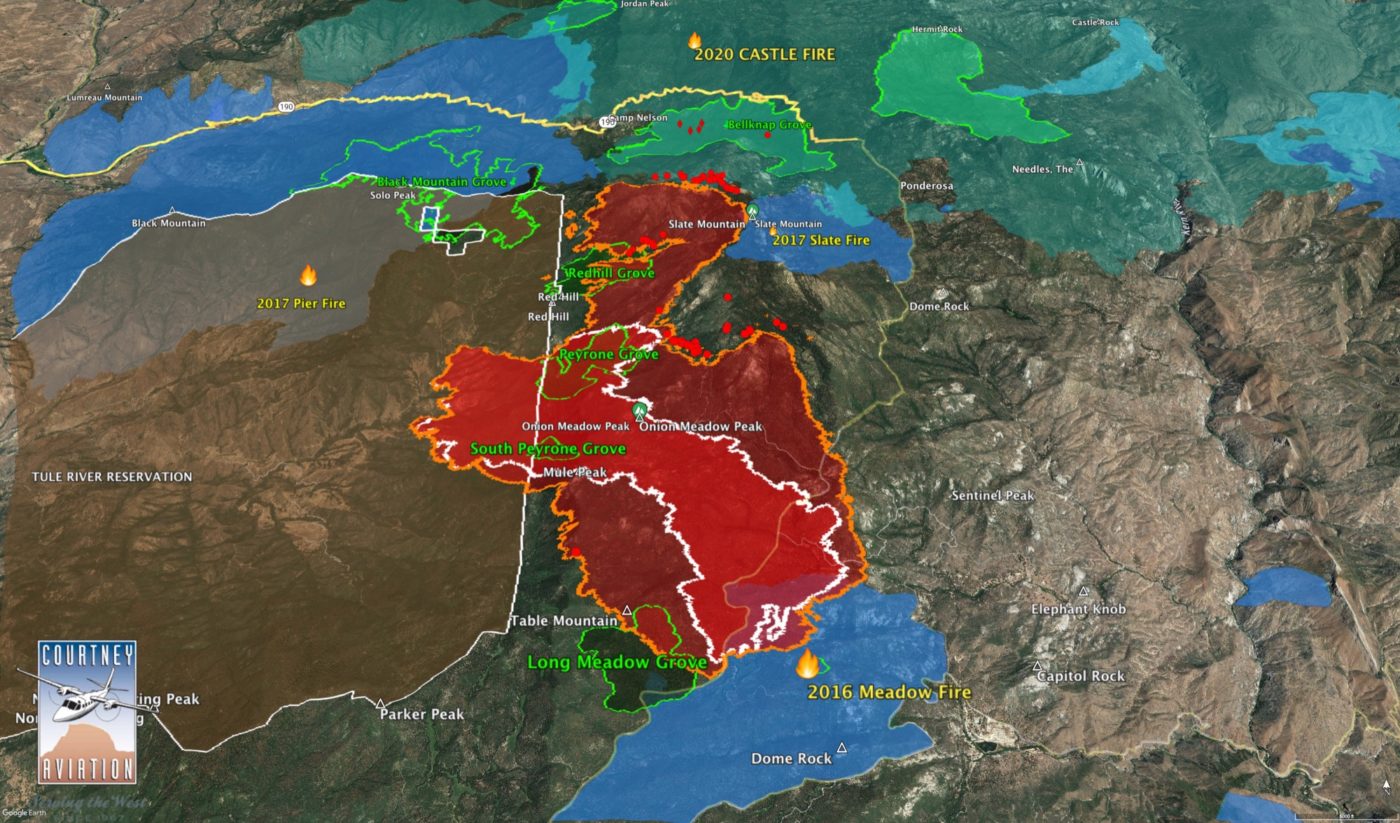 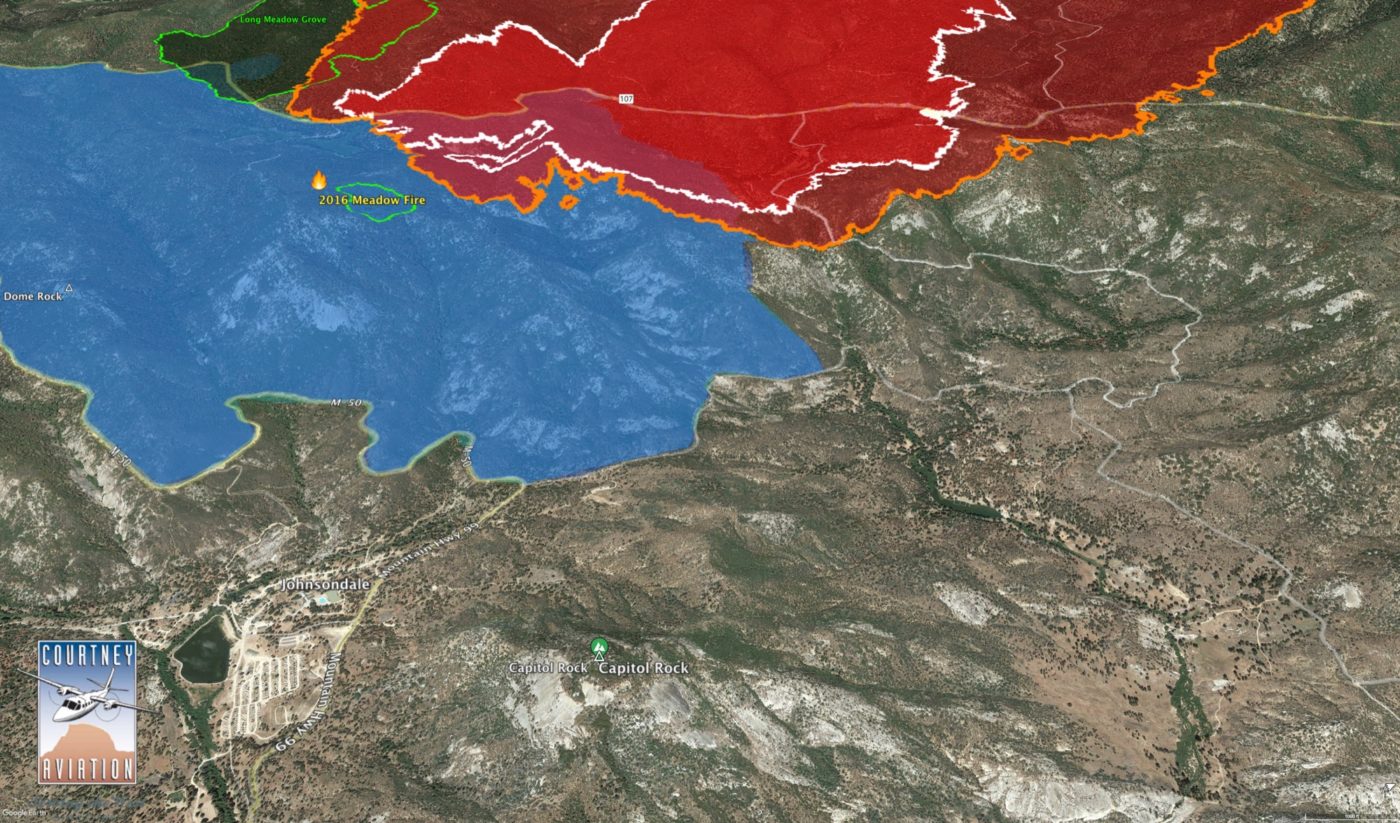 The fire down on the south end is most active on the west side between the Great Western Divide Highway and the Tule River Reservation where it has established itself into the Long Meadow Grove and is pushing along the western flank back in the direction of the Reservation. The view below looks north. Imagery shows heavy tree mortality before the fire in this area. 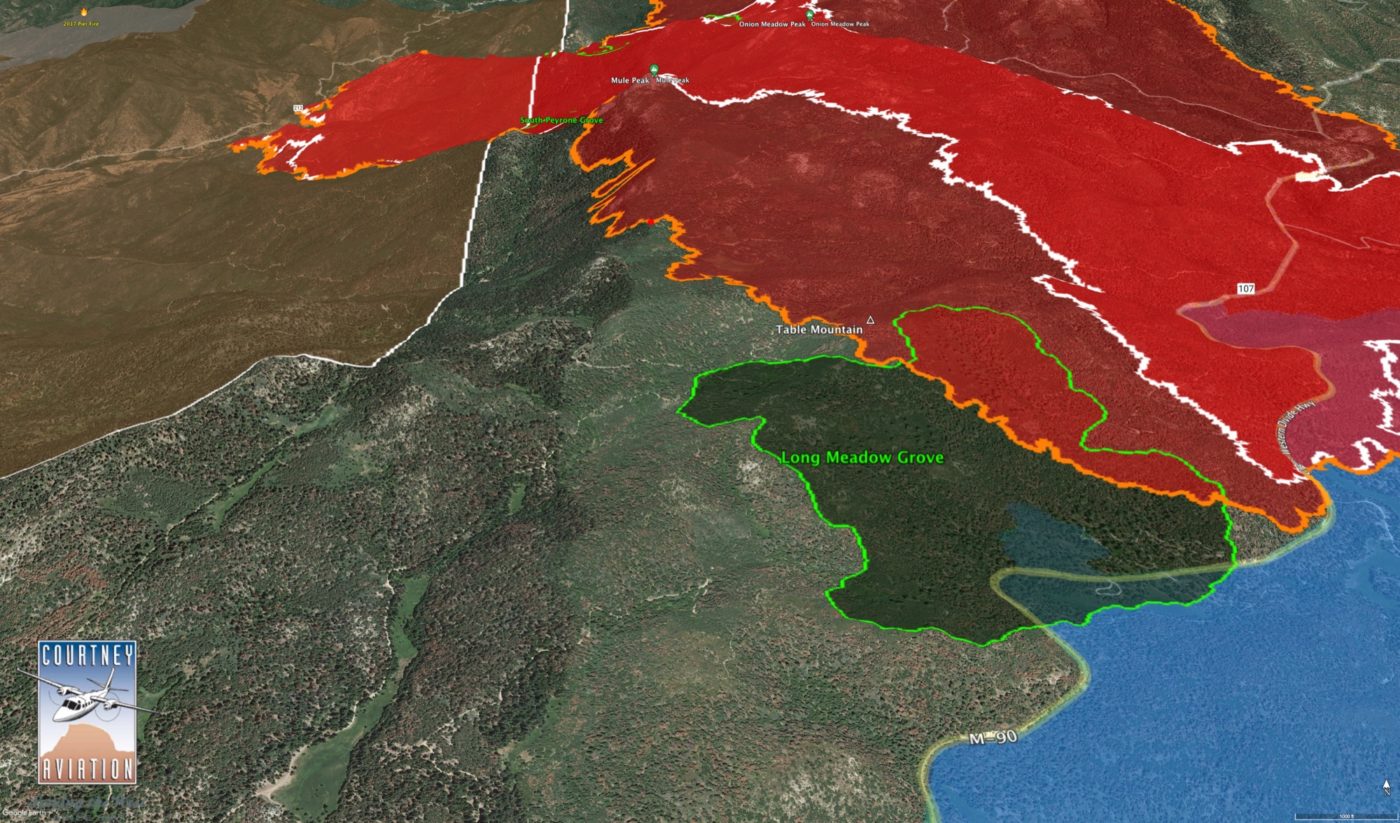 Windy Fire made an impressive upslope run up Slate Mountain on the north flank. The fire spread out, running through the Redhill Grove, up to the top of Slate Mountain, and bumped into the 2017 Slate fire to the east and 2020 Castle Fire to the north. This side of the fire continued to throw some spot fires, including one back into the reservation. The view below looks east. 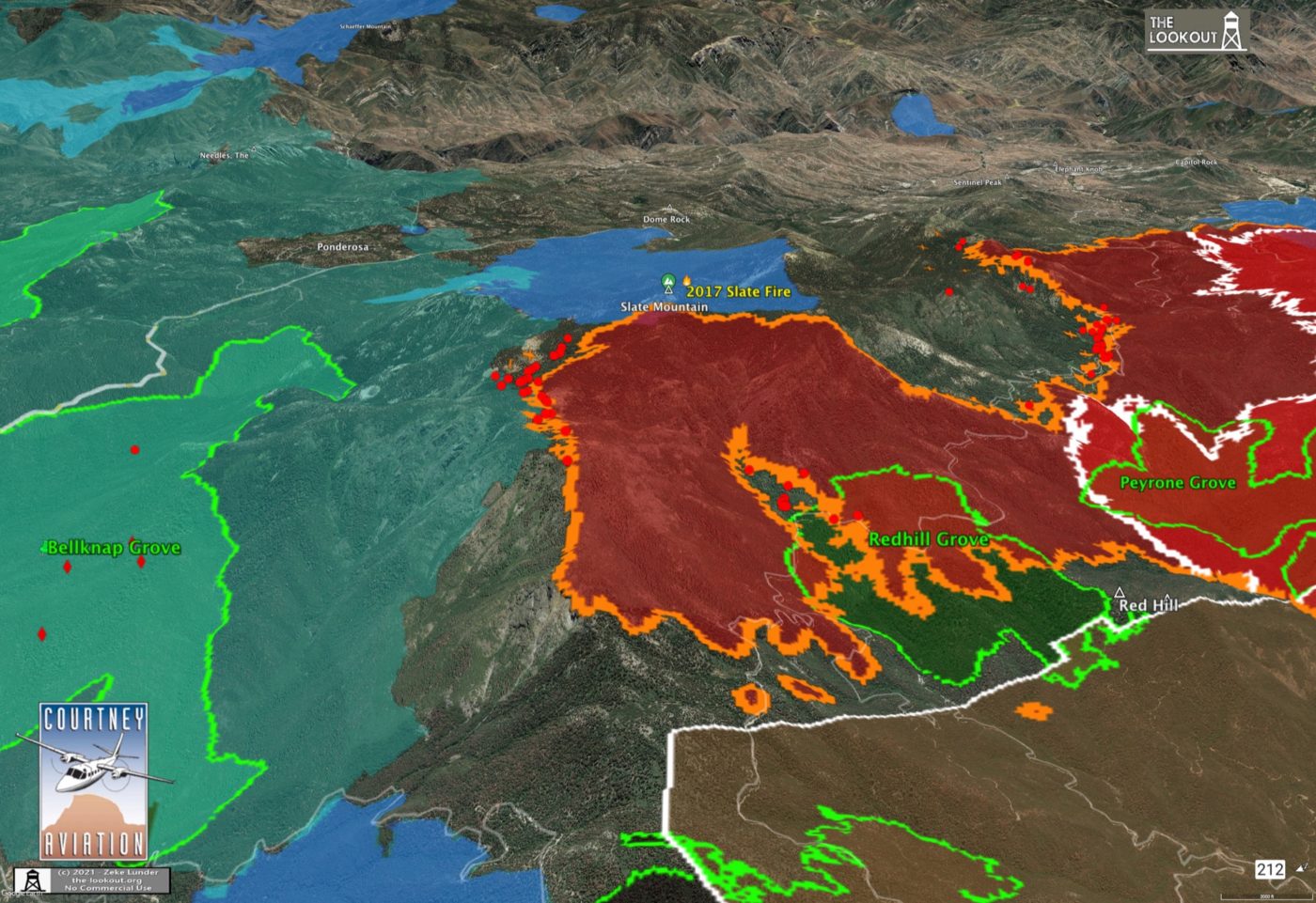 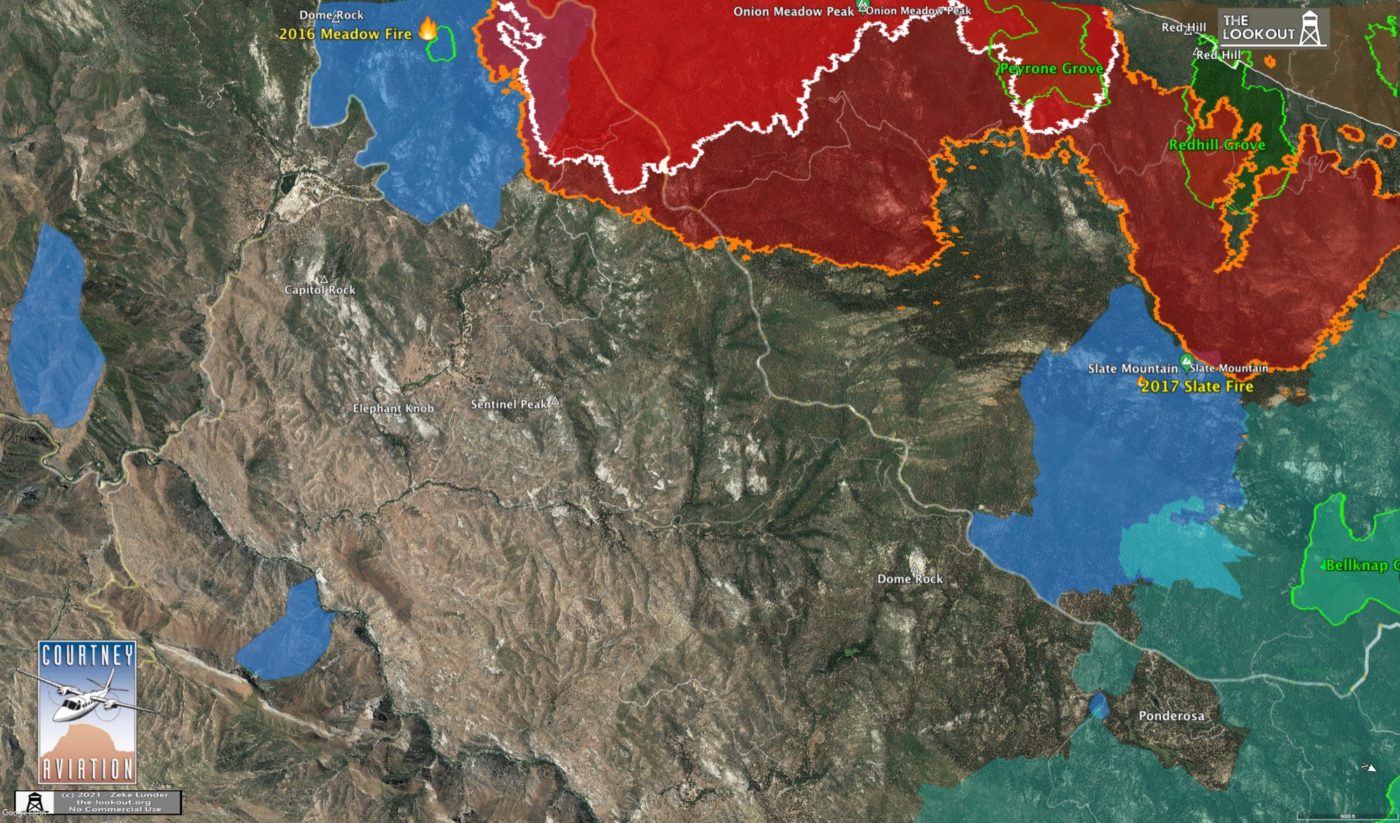