*** 7am on October 4 ~ IR interpreters log book appears to have inconsistencies. Time and date for the flight last night is unreliable/unknown. 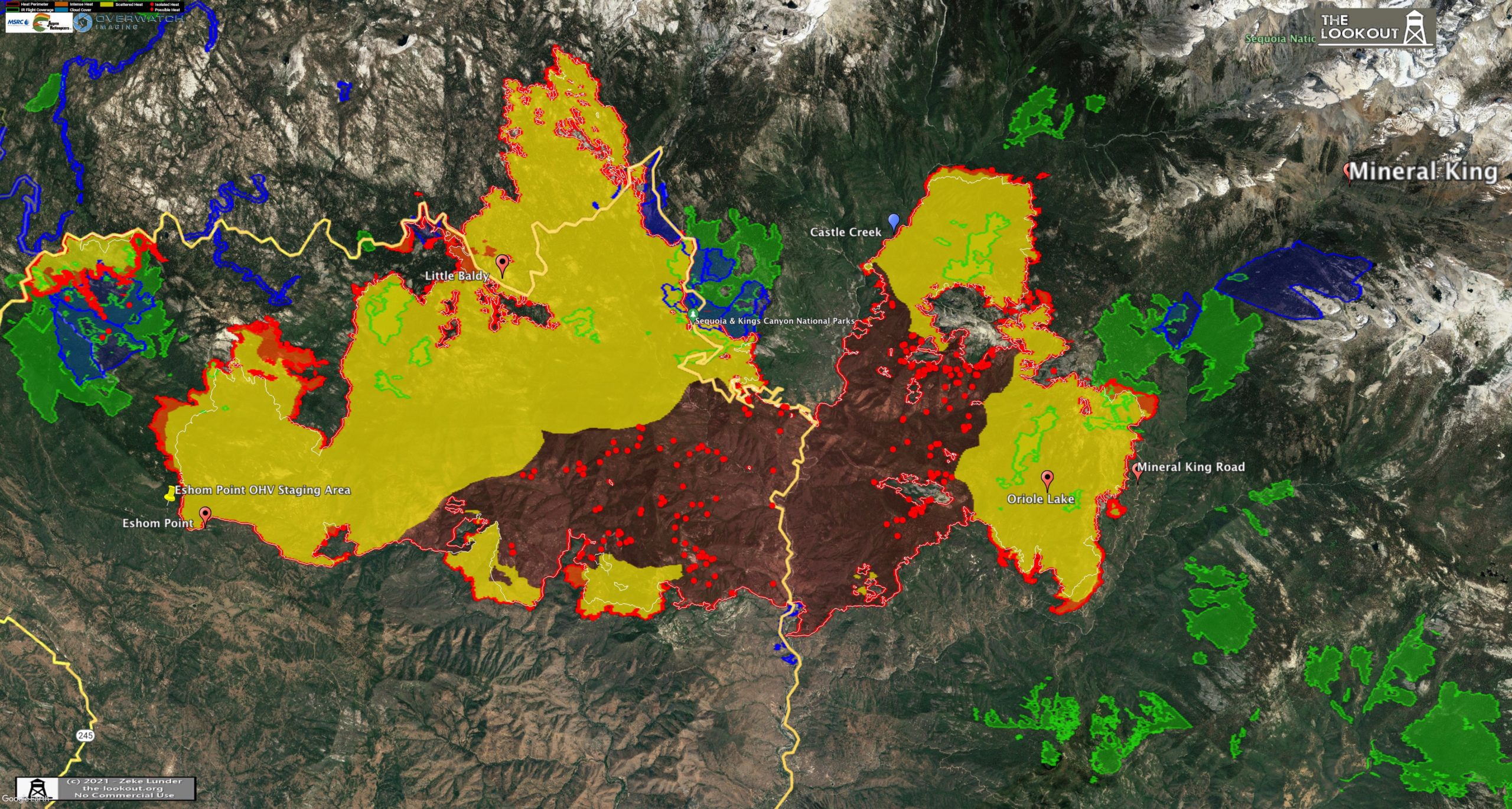 The KNP Complex has been active today, but firefighters have not been observing extreme fire behavior. Aircraft has been grounded because heavy smoke has been limiting visibility. Fire activity is moderate in the Squirrel Creek area near Oriole Lake Road in the south, the groves are not being negatively impacted. The tactical firing operations occurring in the northwest portion of the fire along Generals Highway down to Little Baldy Saddle are designed to protect the lodges and recreational camps to the west of the highway.

Looking south from Wilsonia. Tactical firing operations from the General’s Highway into the Redwood Mountain Grove continues as the spot fire from a few days ago advances to the north and east. The fire has now passed through Big Baldy South, and Big Springs Groves. 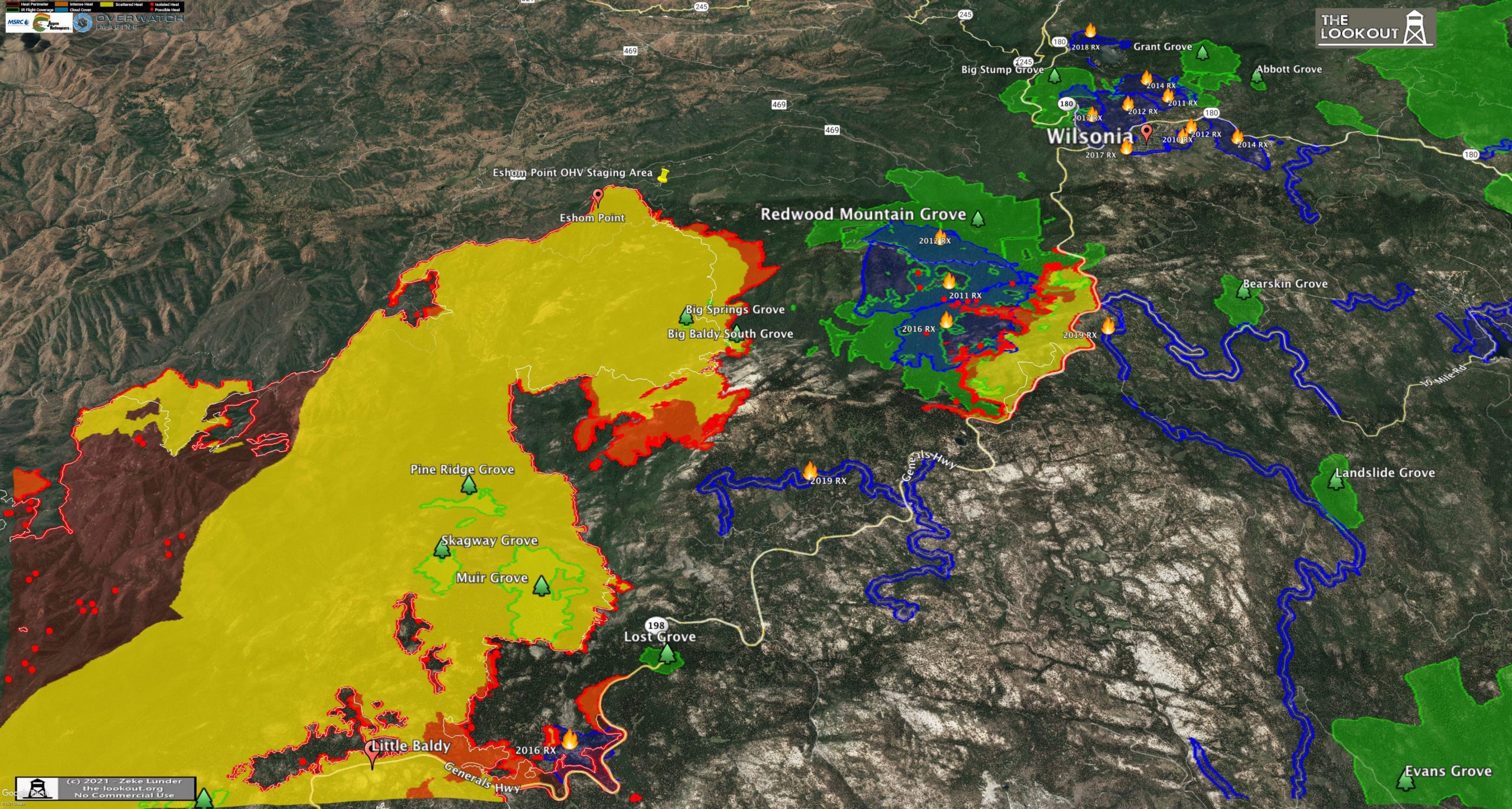 Looking west from Mineral King. The fIre front continues to grow to the east and south. It appears that fire has not crossed the Mineral King road or Castle Creek at the time of the IR flight last night. 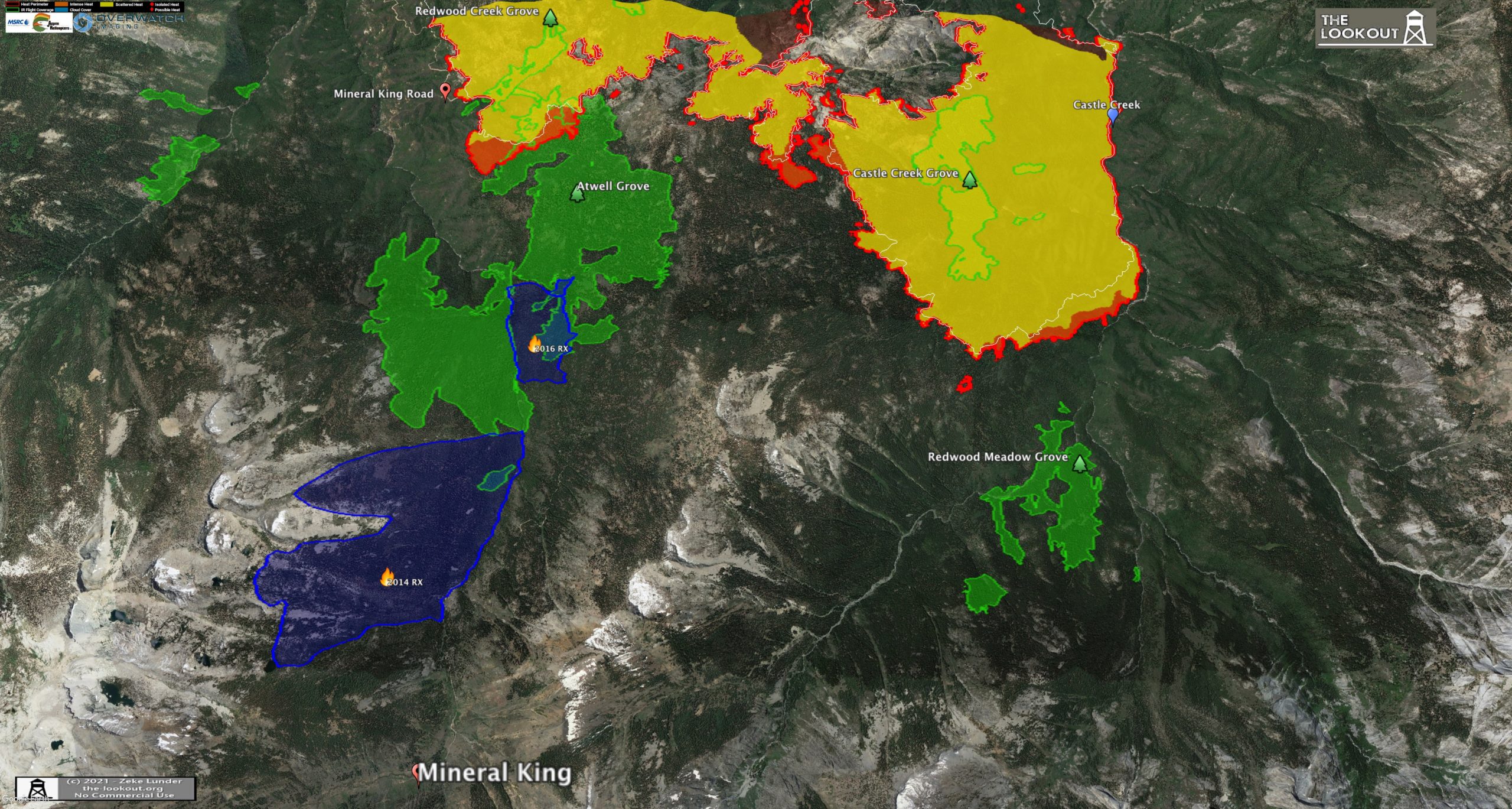 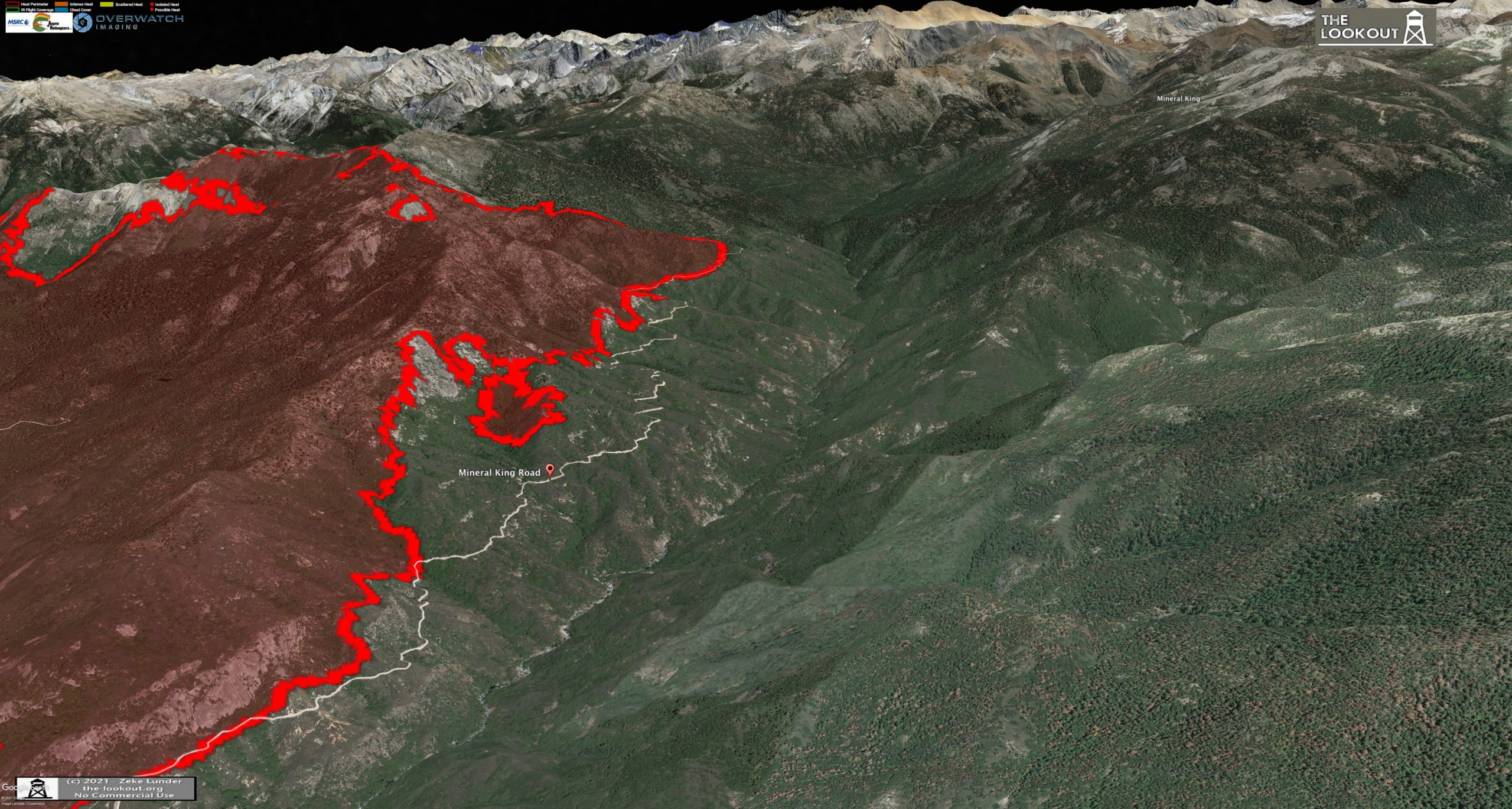 Two burnout operations are taking place along the North Side of the Fire.  Both are along the Generals Highway.  One starts at Durst and is traveling North and the other along the top of Redwood Canyon.  The idea here is to allow for backing fire through the Redwood Mountain Grove, rather than have the main body of the fire head up the chimney-like canyon.

With the main body of the fire drawing a line from Eshom Point to Big Baldy this morning, it seems like it will be difficult for crews to burn at a pace and scale necessary to beat it to the bottom of the Grove. 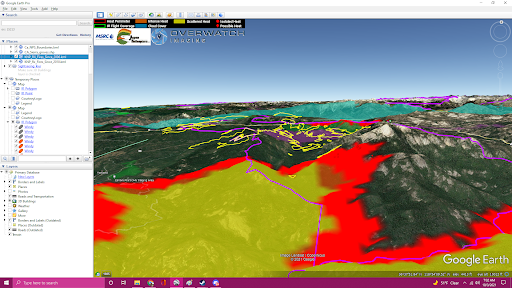 That progression prompted new evacuations yesterday, from Whitaker Forest Road, up Hogback and on through Pinehurst to Sequoia Lake.

An odd weather occurrence was notable throughout the area of the KNP Complex overnight (October 2-3), where temperature and humidity flatlined from about 6pm to the latest observation at 6am this morning.  This means no overnight recovery of fuel moistures and no break in the weather for night time firing operations.  10-hour fuel moistures observed by weather stations remained critically low — at five or six throughout the night.  A typical nightime reading for this time of year would probably be around a 10, for the last couple years it’s been around 7-8 in the early morning of Octover 3 at Ash Mountain raws.

Along the Middle Fork of the Kaweah, the fire continues to grow to the East towards Redwood Meadow Grove.  Announcements from the fire suppression effort indicate that no action will be taken in this area due to the difficulty of access.  With no break in the weather forecast until next weekend, it is a bleak outlook for the Redwood Meadow Grove, that lies at the head of the west facing canyon.

Along Mineral King Road to the South, the fire continues to fill out the area west towards Milk Ranch Rd and East Towards the Atwell Grove.  With the last fire introduction to the area being an Rx burn in 2003, timing is about right for this Grove to burn again, however very low humidities are concerning.  Solar heating will play a role here, atmospheric stability and smoke coverage may help, but the Windy fire won’t be sending as much smoke that way in the coming days. 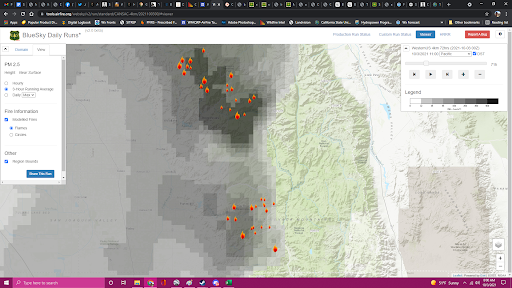 For today, there should be plenty of shade over the KNP Complex, below about 7000 feet.  This map shows forecasted smoke impacts at 3pm this afternoon.

As noted above, the Windy is starting to run out of fuel, with few areas of timber left to spread into.  As the fuel types continue to flow from brush down to grass, lighter fuels will mean less emissions.  Combine that with predicted frontal activity next weekend, and we might have some relief from smokey conditions at that time.

Some more spread may be seen around the Gordon Hills near Cold Spring Grove, but otherwise the Windy continues to cleanup interior islands and the mop up continues.

White perimeter line around the fire was yesterday’s fire perimeter.Giant Sequoia Groves are SHADED GREEN. Past 10 years of (Rx) prescribed fire is SHADED DARK BLUE. All other perimeters with various color fill show the past 10 years of fire history in the area👇 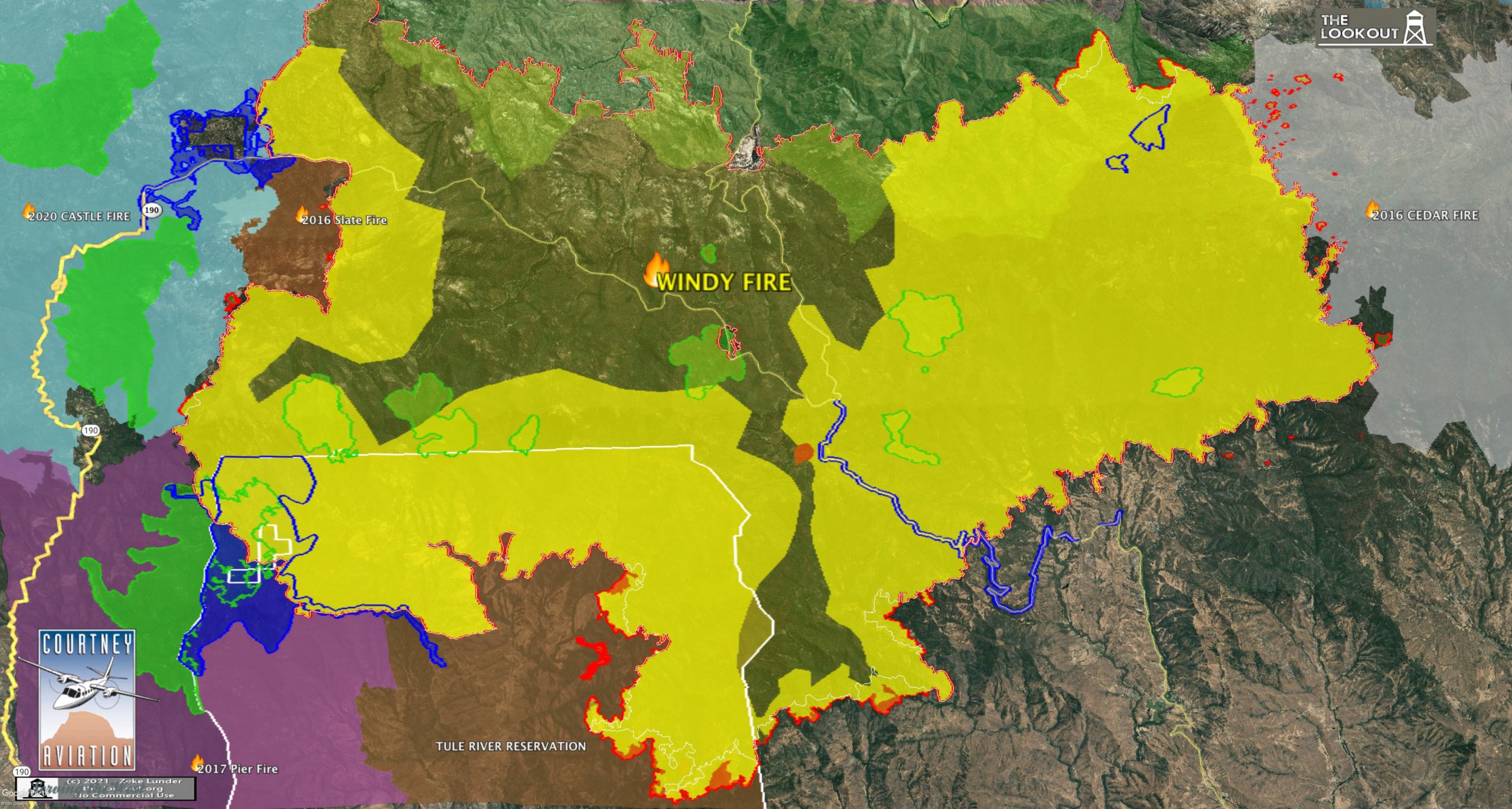 CURRENT SITUATION: The Windy Fire is 94,746, acres with 68% containment and is a full suppression fire. The fire is burning on the Tule River Indian Reservation and the Sequoia National Forest, which includes the Giant Sequoia National Monument. The fire increased 2,273 acres in the last 24 hours.

The fire’s perimeter is over 200 miles long and crews have now completed and secured 68 percent of the containment lines around the fire. To ensure the fire doesn’t escape containment, firefighters continue tactical patrols looking for and extinguishing any burning trees, stumps and vegetation within the fire’s perimeter. They also are falling hazard trees along roadways to make passage safe for vehicles. Two areas remain a priority for securing containment; the northwest side on the Tule River Indian Reservation south to M50 (at the switchbacks), and the eastside in the Kern River Canyon from Johnsondale south to Baker Peak.

On the northwest side, indirect dozer line and handlines have been completed from M50, at the switchbacks, northwest to Lone Pine Mountain and to Wheatons on the Tule River Indian Reservation. Crews continue to look for opportunities to directly attack the active fire front and stop its movement to the west. In the rugged and accessible drainages where it is not safe for firefighters to work, crews are implementing a tactical firing operation to remove vegetation between the indirect containment line and the fire’s edge. The firing operation is expected to take several days to complete.

On the eastside in the Kern River Canyon, crews are building line south to Speas Ridge and from Baker Peak north towards Ant Canyon. South of Speas Ridge the area is very rugged and inaccessible and helicopters are being used to drop water and fire retardant to cool hot spots.  If the smoke inversion lifts, the Bombardier CL-515, (Super Scooper) planes are on standby in Bakersfield and will be available to help with suppression efforts. Crews are also removing brush and vegetation along the Whiskey Flat Trail (32E35) to improve a secondary containment line. Structure defense engines are in place in Fairview.

WEATHER AND FIRE BEHAVIOR: A weak high pressure system will remain over the region today with dry conditions and warmer than normal temperatures.