We have been covering the Graham Fire for past two days and this video gives an overview of the challenges that arise wile managing wildfires in the almost one million acres of the “Lassen Foothills,” bordered by Red Bluff and Cohasset Ridge and the Sacramento Valley and Lassen Volcanic National Park. 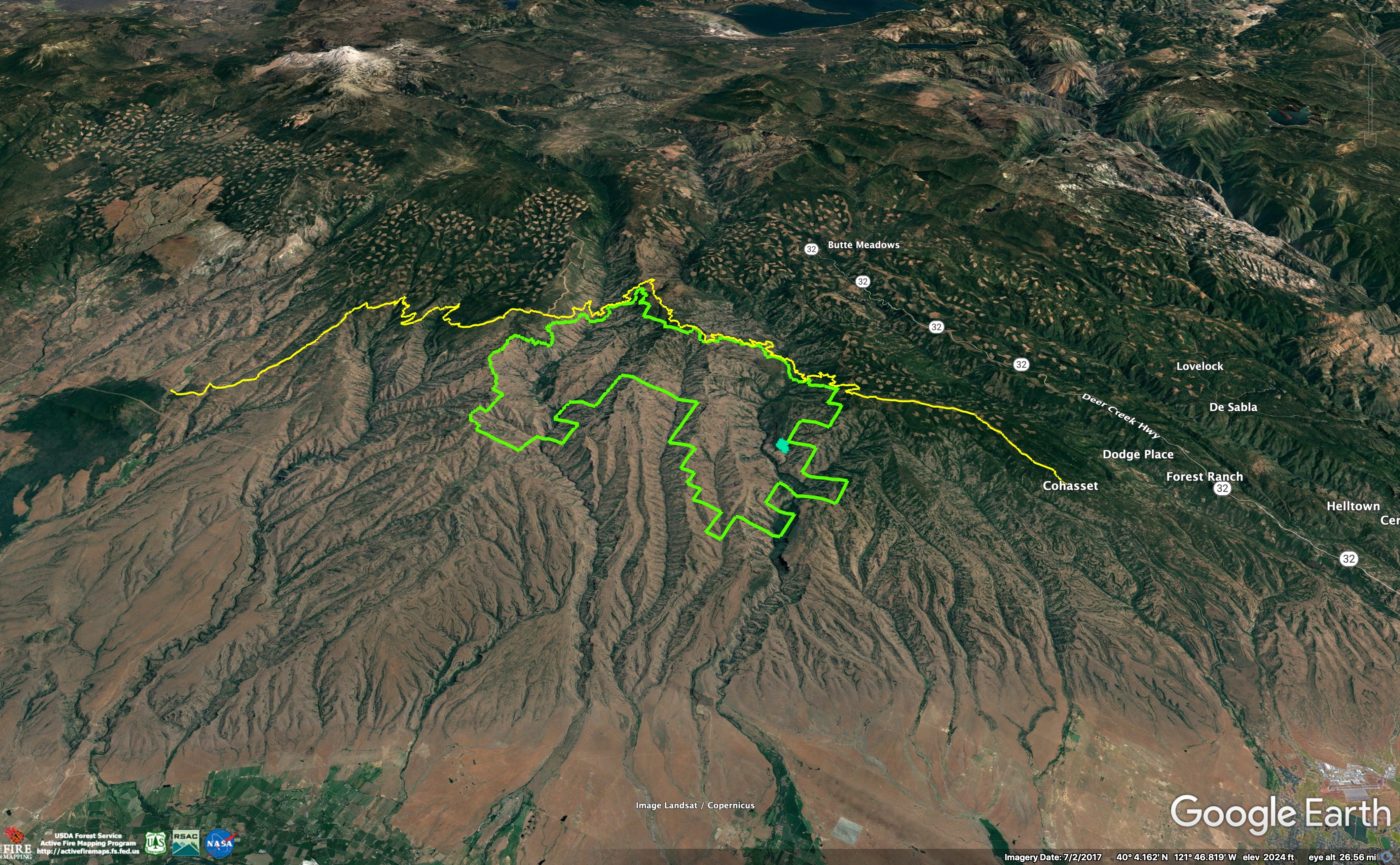 There is a small fire burning north of Cohasset in the Lassen Foothills. The Lassen Foothills is the name for the region bound by Highway 32 and Highway 36, between the Sacramento Valley and Lassen Peak/Lake Almanor. Deer, Mill, and Antelope Creeks are the major drainages in this area, and the Ishi Wilderness is in the middle of it all (green, above). The new fire is the small, light blue dot in the right side of the Ishi Wilderness in the map above. 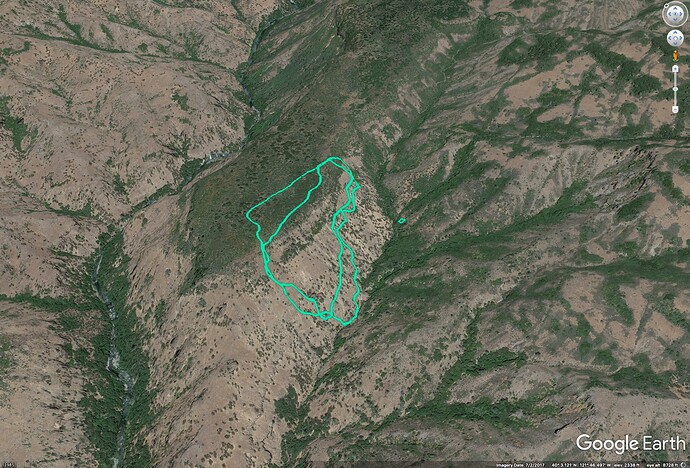 There is a ‘pinery’ on top of the ridge where the fire is burning. Similar to the well-known Beaver Creek Pinery (which is just across Deer Creek to the northwest), these were some gorgeous ridgetop ponderosa pine stands that endured a lot of fire throughout the 20th century. The 1990 Campbell Fire hit the Graham Pinery hard, though, and there are still a lot of down logs on this ridgetop from that event. The second Campbell Fire in 2014 was less severe, but also affected the area. 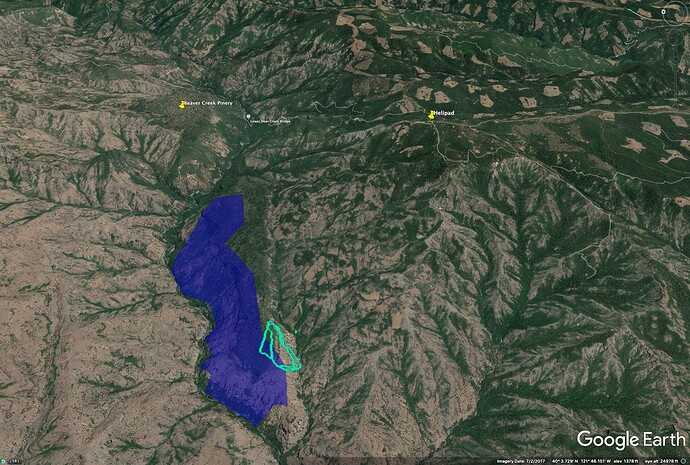 I worked on a fire management plan for Deer Creek watershed in 1999 and did fire planning for The Nature Conservancy for the Lassen Foothills in 2004. We also just finished up the South Lassen Watersheds assessment, so we have spent a lot of time thinking about fire here, and even named our old company (Deer Creek Resources) after the area. What we have known for a long time is that the health of the Tehama Deer Herd relies on this area burning frequently to create new, tender brush sprouts, and that the pineries in this area will not survive if we don’t get fire back into them soon. We need to use fire to manage this landscape, and not on a small scale. It all needs to burn, but probably not right now, at the beginning of summer! 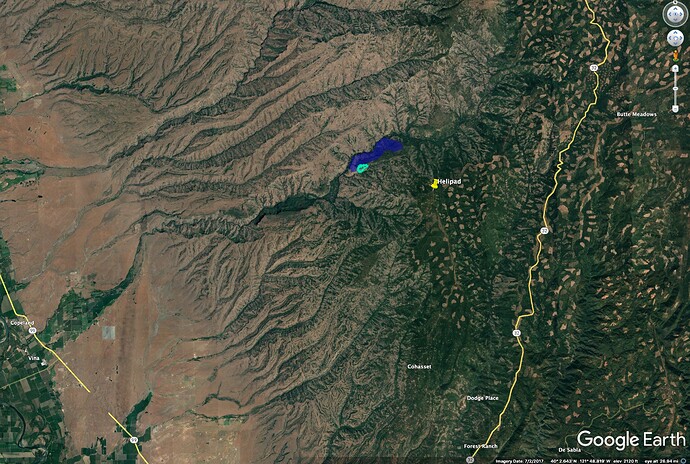 Fires in this area often make major downslope runs at night. They will paint the hell out of this thing tomorrow morning with heavy tankers, and may drop up to 100,000 gallons of mud on it before noon.

These pineries are the best examples we have left on the West Coast of a frequent-fire pine savanna, but in past 20 years, Beaver Creek Pinery has gotten choked with young pine reproduction. The Forest Service would like to burn in the pineries, but it’s unlikely they’ll pull it off due to the remoteness, wilderness designation and complexity of putting fire on the ground in the middle of nowhere in an area that hasn’t burned since 1994! So these areas are likely to burn in wildfires, and hopefully they will survive. If they get too thick, many of the trees will die from beetle attacks. The appropriate time to apply fire in here was 25 years ago. 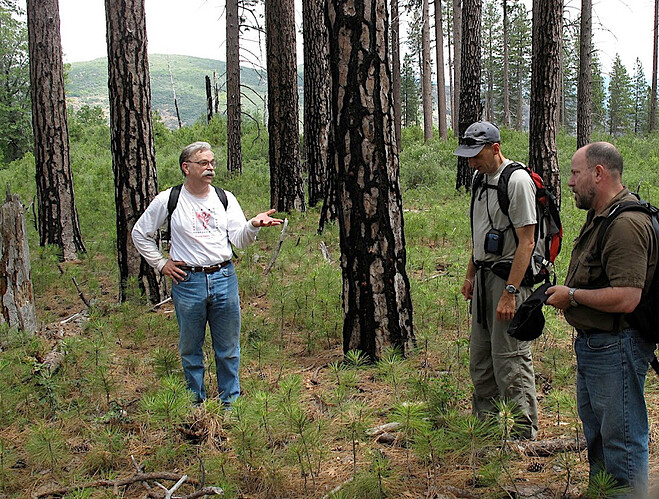 Large fires in 1990s and earlier. There haven’t been any big fires in this country since 2014 Deer Fire, which burned about 11,000 acres. 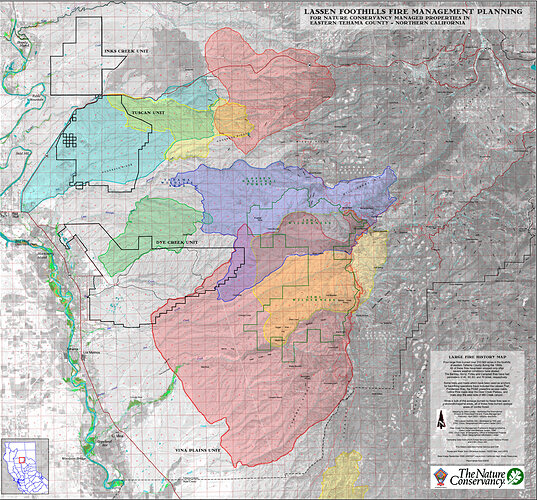 Fire history. The 1990 Campbell Fire was one of the largest fires in the modern history of the state. 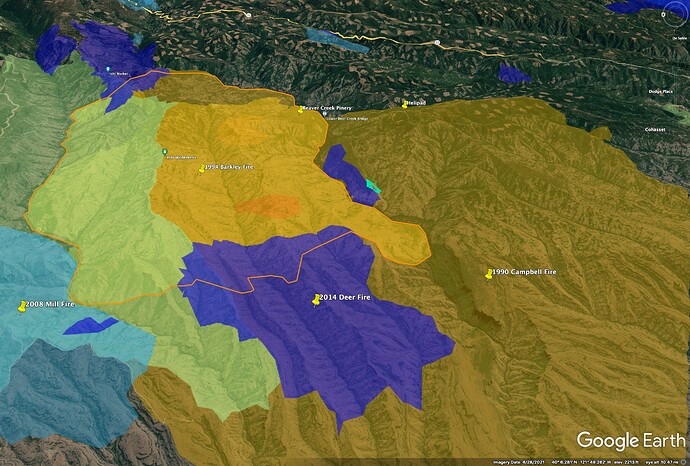 The new fire is right on the edge of Ishi Wilderness, shown in green. 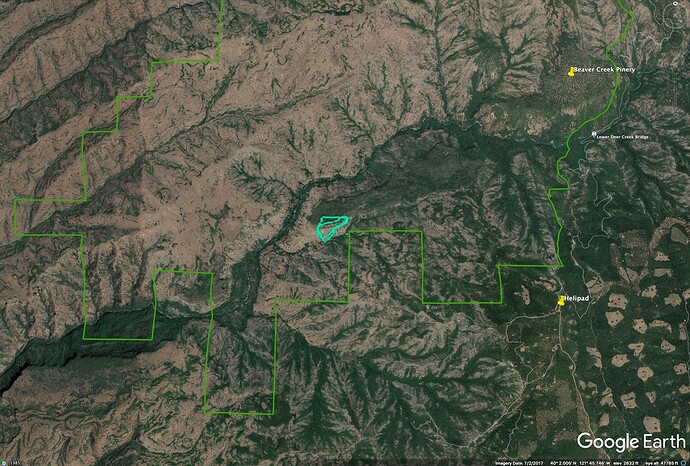 Time will tell how large this fire gets – with scant competition for firefighting resources, this one will likely be put out quickly, but it presents a good opportunity to talk about the Lassen Foothills, specifically the Ponderosa Way corridor, which is the only passable road transecting this remote part of Eastern Tehama County. We (Deer Creek Resources) recently worked on a landscape-scale fire hazard assessment which included portions of this area. Below is an excerpt that discusses options for increasing fire resilience and strategic plans for fires which become large in this landscape.

Ponderosa Way (yellow in map, below) is an example of a high-value tactical corridor. Ponderosa Way was built by the Civilian Conservation Corps during the depression. Running the length of the Sierra Nevada Foothills, generally near the transition from brush to timber, it was intended as a firebreak and for firefighting access. Many of the current CAL FIRE and Forest Service fire stations that are in use today were built along Ponderosa Way. Generally, these were an hour apart on the road, so that firefighters could respond anywhere on the road within a half hour or so. Before radios were available, a telephone line ran alongside the road, and firefighters carried a pair of climbing spurs and a hand-cranked telephone that they could use to ring the station once they were on scene at a fire. Some of the original fire stations still exist, including Lassen Lodge, Cohasset, Forest Ranch, Magalia, Jarbo Gap and Feather Falls. Other stations are just old names on the map, like Panther Spring. For reference on the map below, Paynes Creek is at the northern terminus of the yellow line, and Cohasset is just off the bottom of the map. Ishi Wilderness shown in green. Deer and Mill Creek traverse the map from upper right to lower left. 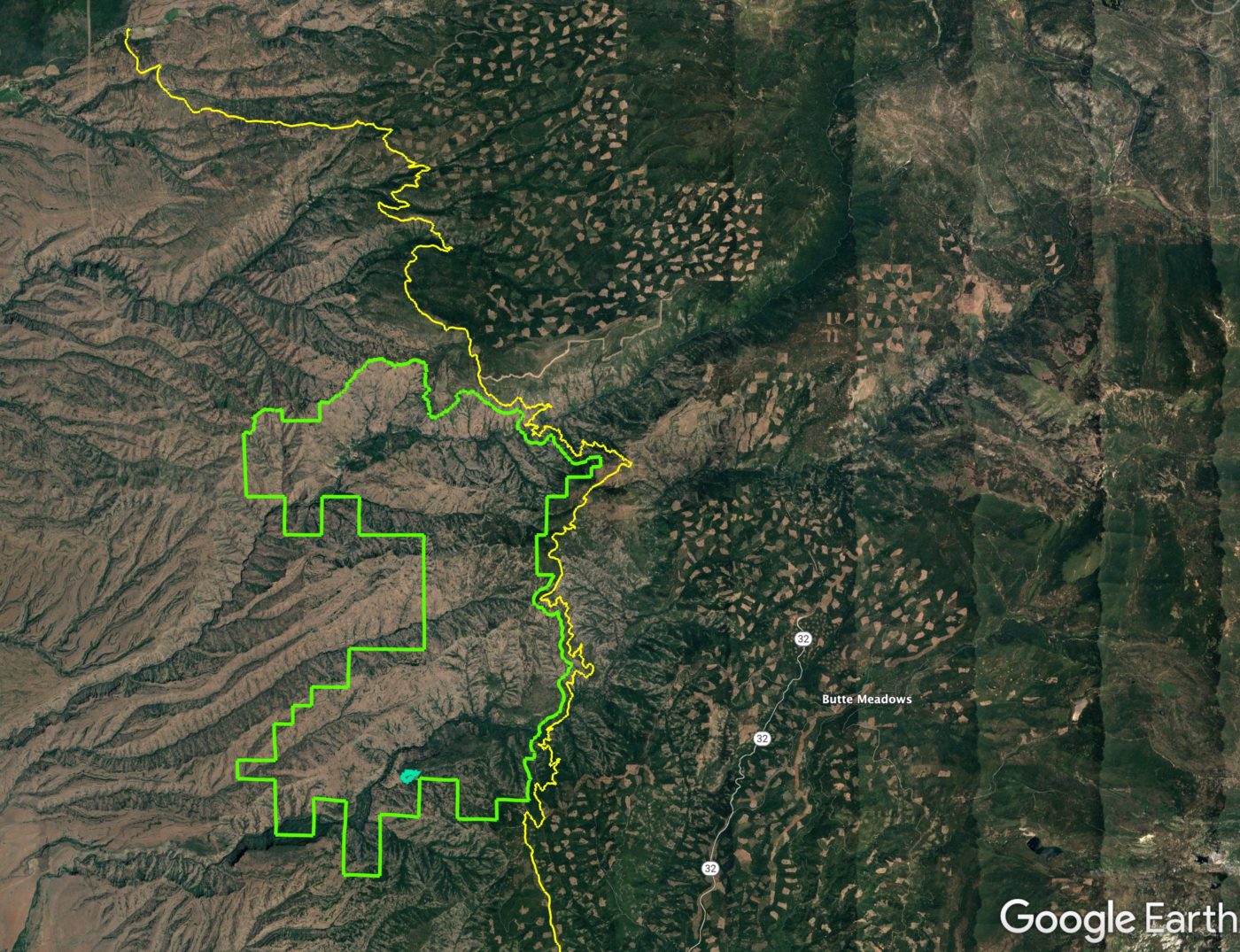 There is a history of large fires burning in the Ishi Wilderness Area (green on map, above) over the past 30 years. While a new generation of airtankers has been largely effective in keeping big fires out of the Ishi over the past decade, the 1990 Campbell Fire burned 130,000 acres between Highway 99 and Ponderosa Way, and the 1994 Barkley Fire burned 40,000 acres, mainly in Deer Creek. The 1999 Gun2 Fire burned 60,000 acres in this area, driven by strong north winds.

When large fires happen in the Lassen Foothills, Ponderosa Way will usually be in play, and as such, cross-boundary hazard-reduction projects along this corridor are a high priority. Much of the private timberland along Ponderosa Way has been thinned over the past 20 years.

We recommend using these thinning areas as anchor points for large (5,000 acres or more) prescribed burning projects in the Antelope Creek Watershed straddling Ponderosa Way. Ownership patterns — property lines generally run N-S or E-W — make it impossible to do burns at this scale without cross-boundary coordination. We recognize that prescribed fire is unlikely to happen at this scale in the near future for a variety of reasons. However we have a high level of confidence that this area will burn sooner rather than later in a large fire, regardless of policy, and suggest that industrial timberland owners and federal fire managers work now to develop strategies they can use during firing operations on the inevitable large wildfires to reduce wildfire impacts. Specifically, we suggest the development of a burn plan (especially the firing plan components) that can be implemented during a wildfire. Any fire mitigation thinning projects done on public lands in the front country should be implemented in areas which have tactical value during a large wildfire (meaning they will be useful in implementing large-scale firing operations).

To boil it down: The wildland areas of the Lassen Foothills need fire in a major way.

Above Ponderosa Way is mainly private timberland and fire is not part of the timber company’s program. So large-scale prescribed fire is unlikely to happen, but it is going to burn anyway, and we’ll likely be putting a lot of fire on the ground when we try to hold a big fire on Ponderosa Way, so let’s start planning that firing now, and filling in the gaps with thinning and hopefully at least some prescribed fire so we are more likely to succeed, and maybe even get some good fire on the ground when we are faced with a major wildfire here in the future.