*Lookout fire maps are high resolution. Click the maps to open them in a separate window, where you can zoom and scroll. This can be helpful for viewing our maps on cell phones*

Action on the #OakFire has narrowed down to a couple very rugged miles on eastern flank. Portions of fire have reached bottom of Devil Gulch, with potential to run east and uphill if they cross.

250 hand crew members, 58 engines, and many dozers are assigned to Div J and K. 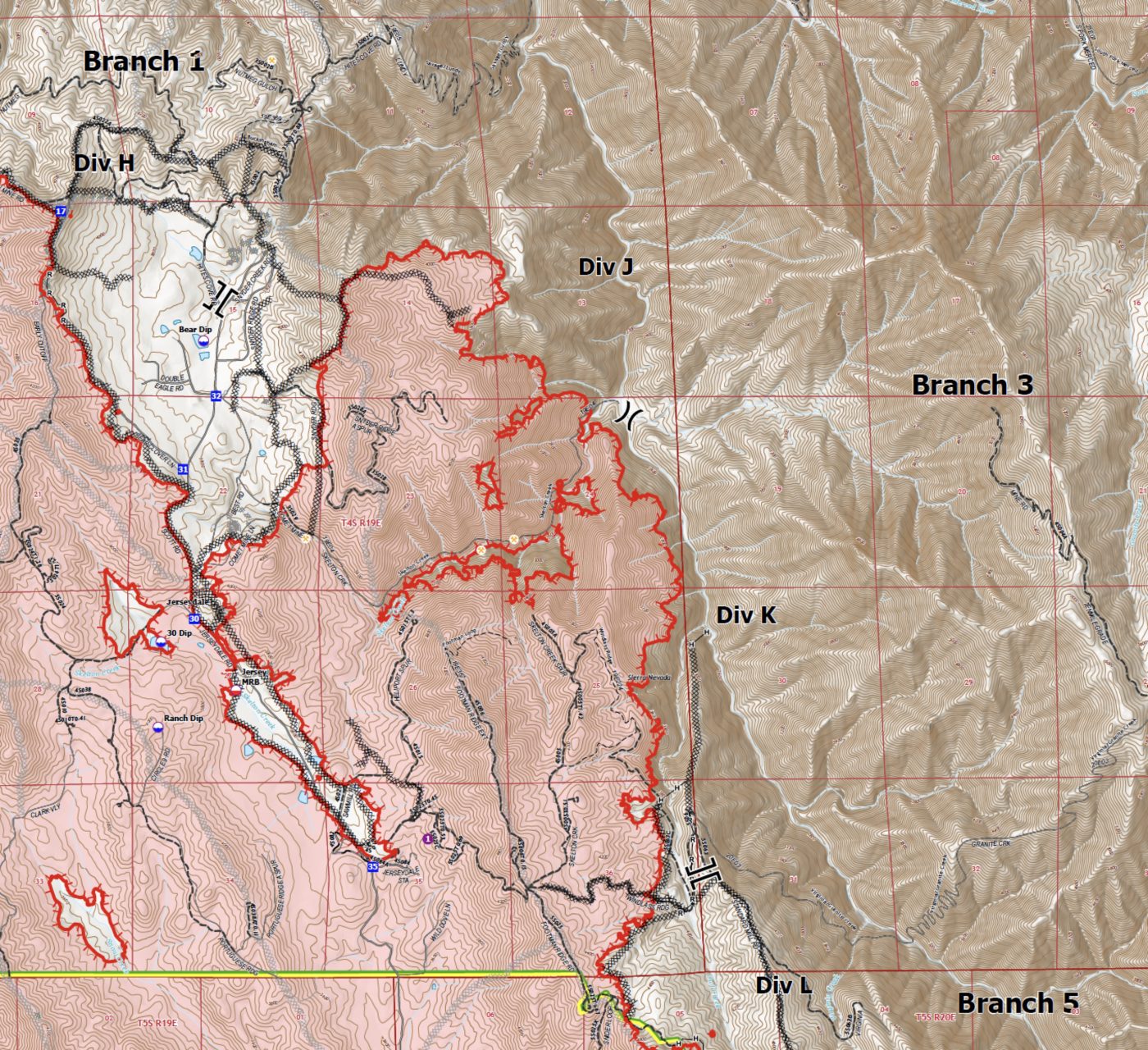 This morning’s Fire Behavior Forecast emphasizes potential for rapid spread to the east and up the west side of Granite Ridge if the fire crosses Devil Gulch. Weather forecast is for hotter and drier conditions, with some smoke hanging in Branch 3 this morning, lifting out around noon. 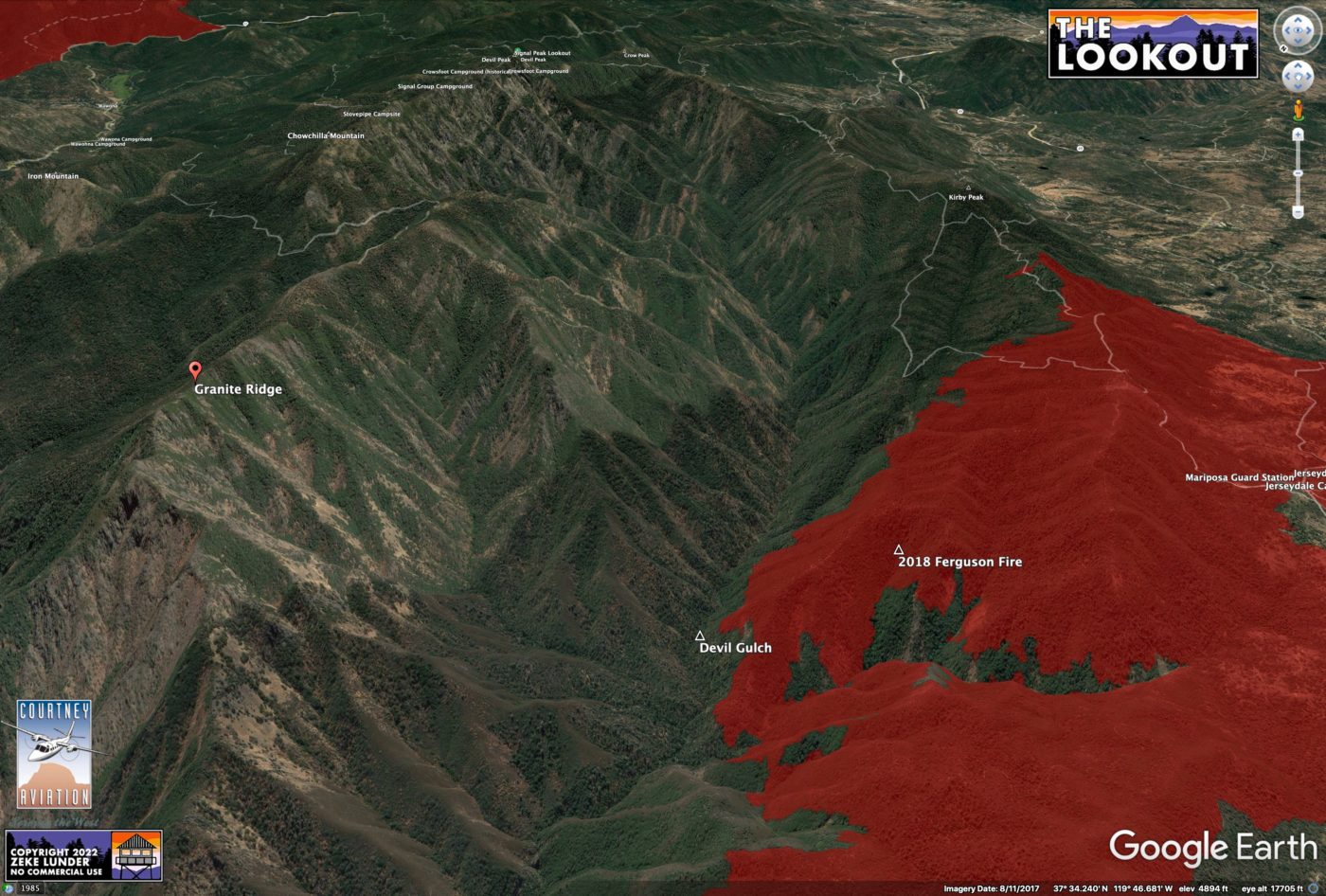 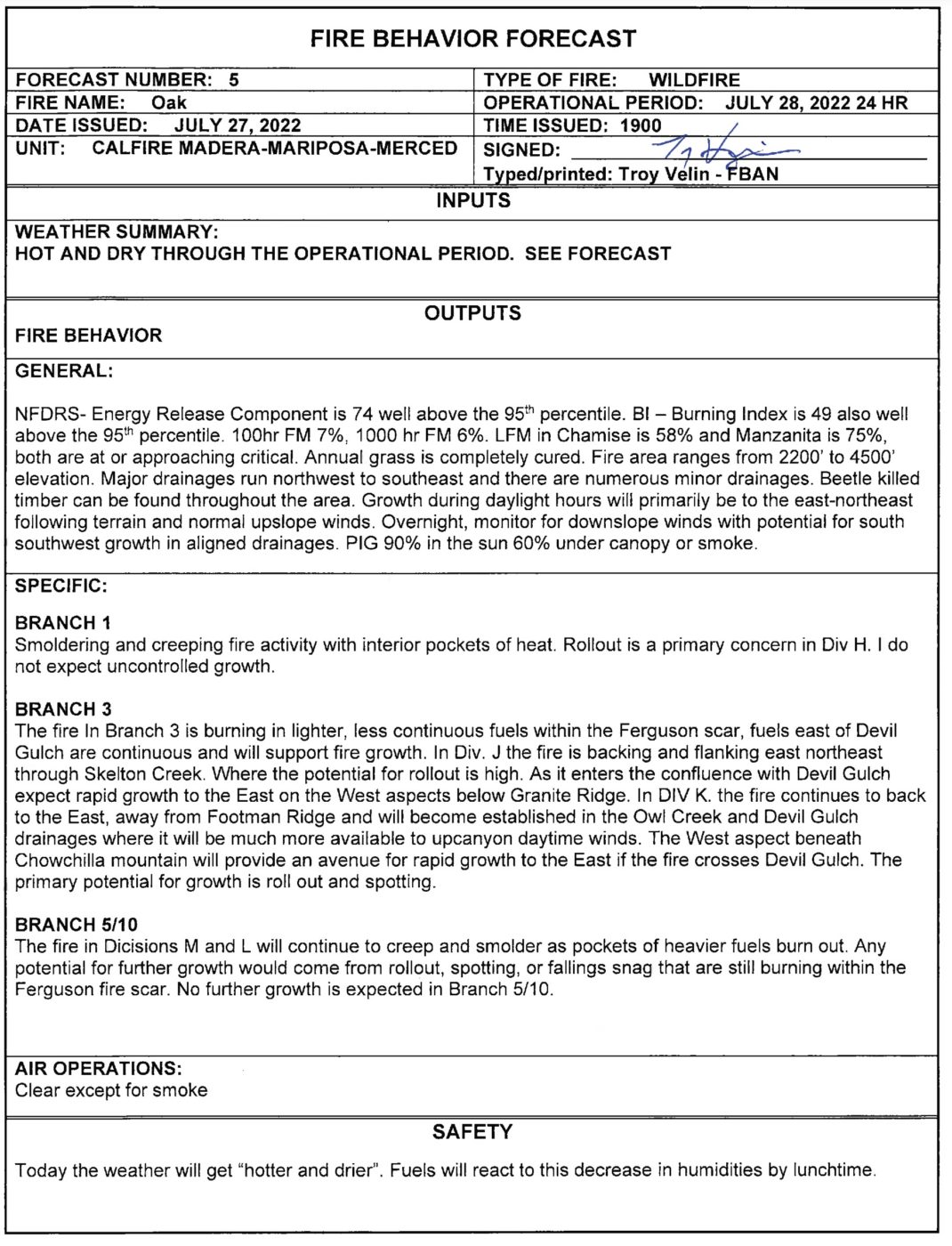 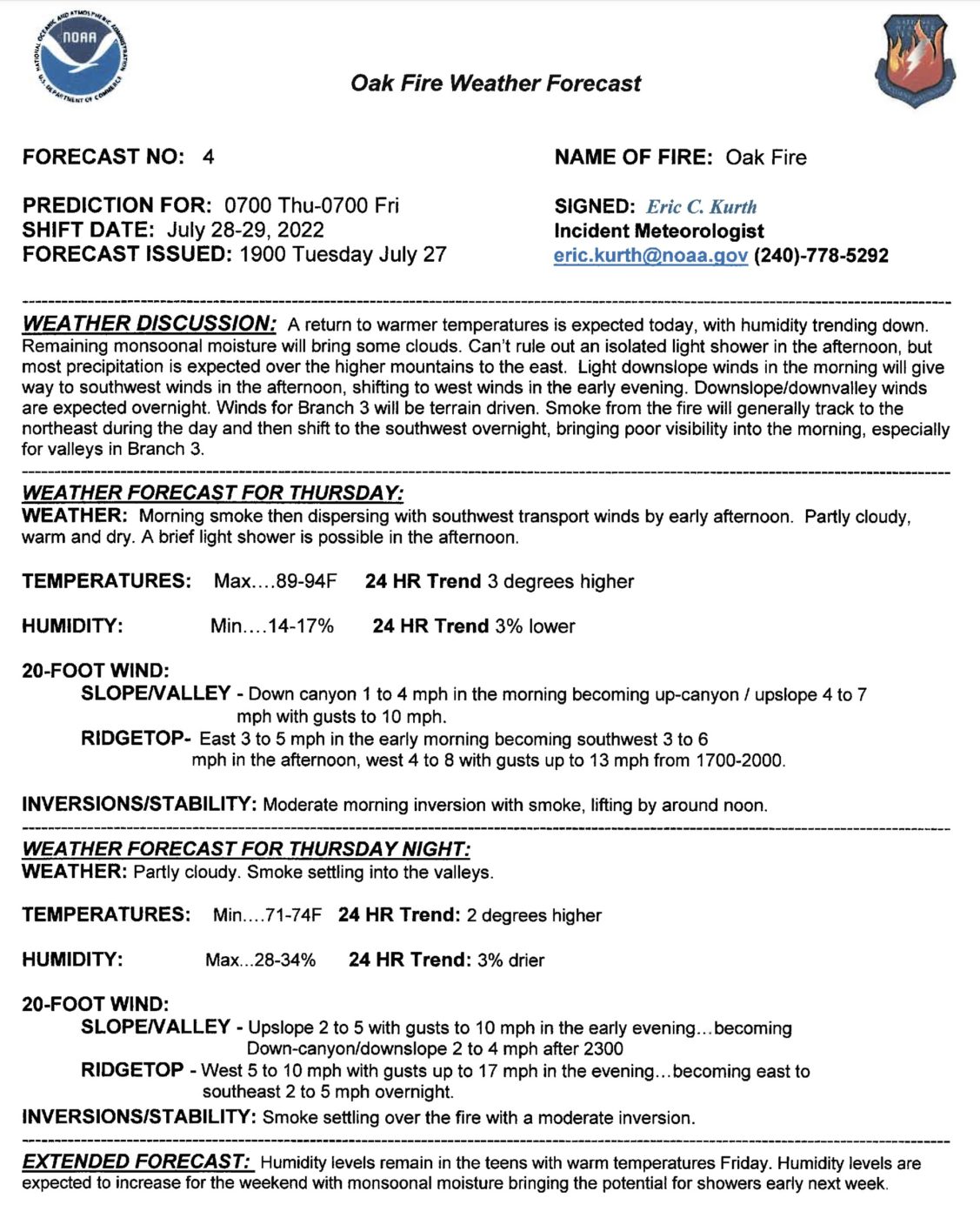 The Oak Fire team has been opening up old dozer lines from the Ferguson Fire as a ‘Plan B’ if they can’t hold the fire at Devil Gulch. This (opening old lines) happens often on large fires, as the best tactical locations for corralling a large fire don’t change over time, especially in deeply dissected terrain like the South Fork Merced River Canyon. Most major ridgelines in the fire-prone parts of the western U.S. have old dozer lines on them.

The 2018 Ferguson Fire (blue in map below) got large, in part, because of the gnarly topography here. Two firefighters died during that fire — one in a bulldozer accident on steep ground and the other was hit by a falling dead tree.

Operational planners look for ‘rivers, ridges, and roads’ to box in big fires. But once you identify places for firelines, you have to connect these features. The ground here makes this difficult.

Successfully executing major indirect firefighting operations on large fires requires a complex choreography of resources, fire prediction, and time. The predictive element is important because it may take four or five days to put in a major fireline, cut down all the dead trees along it, and light a backfire to rob the advancing fire of fuel. So the plan must anticipate how far the main fire will advance during the time it takes to prepare and execute the plan. If you don’t have time or resources to prep the line, fire it, hold it until it cools down, catch spot fires, and mop up the edge, the entire operation is likely to fail. On large fires, marshalling enough resources for a major indirect fireline and firing operation may rob crews from another part of the fire that also needs them.

If there are enough resources, fire command teams try to begin cutting contingency lines as early into the firefight as possible. The purple lines, below, are bulldozer lines cut so far on the Oak Fire. Black lines are where dozer lines were put in during the 2018 Ferguson Fire. 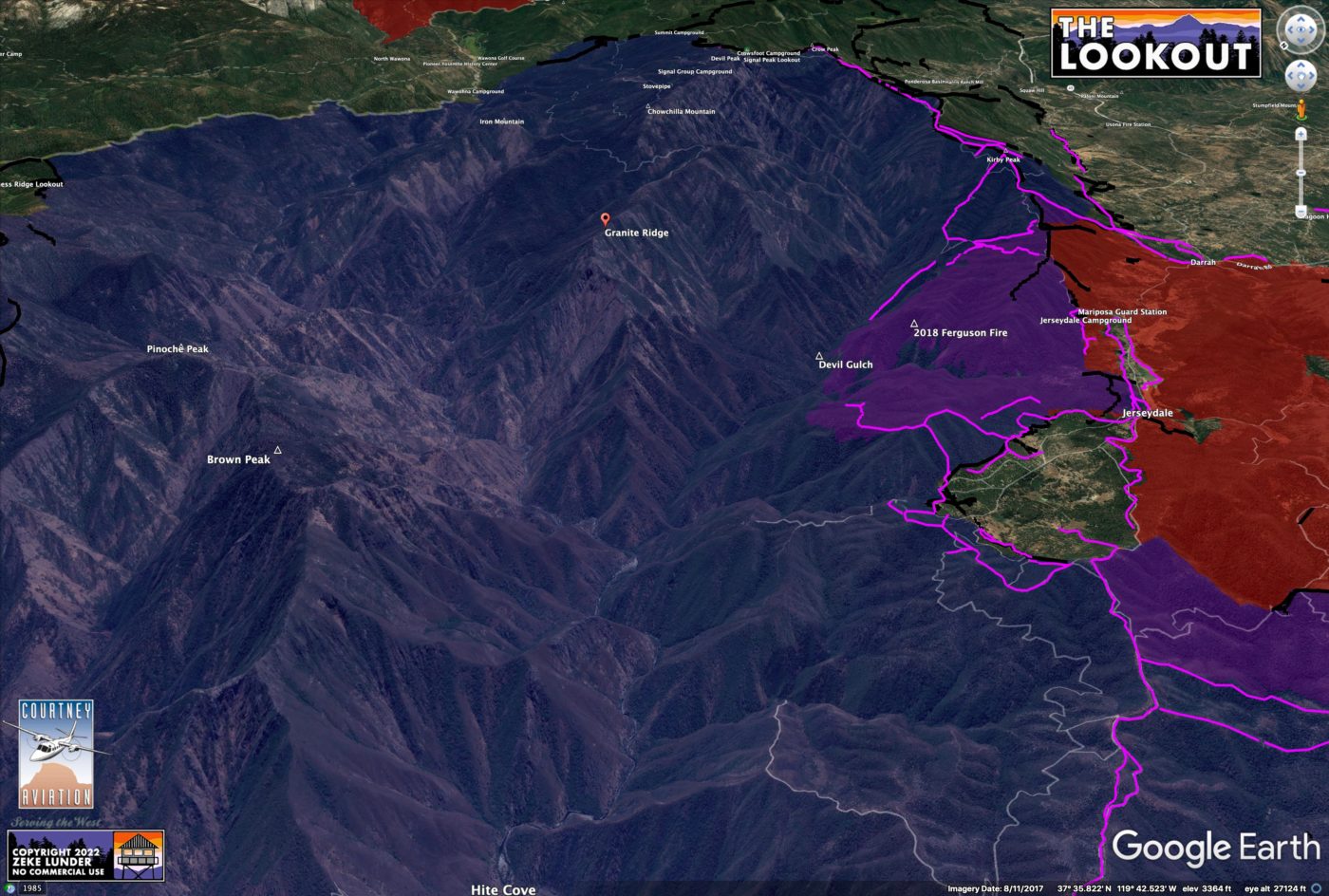 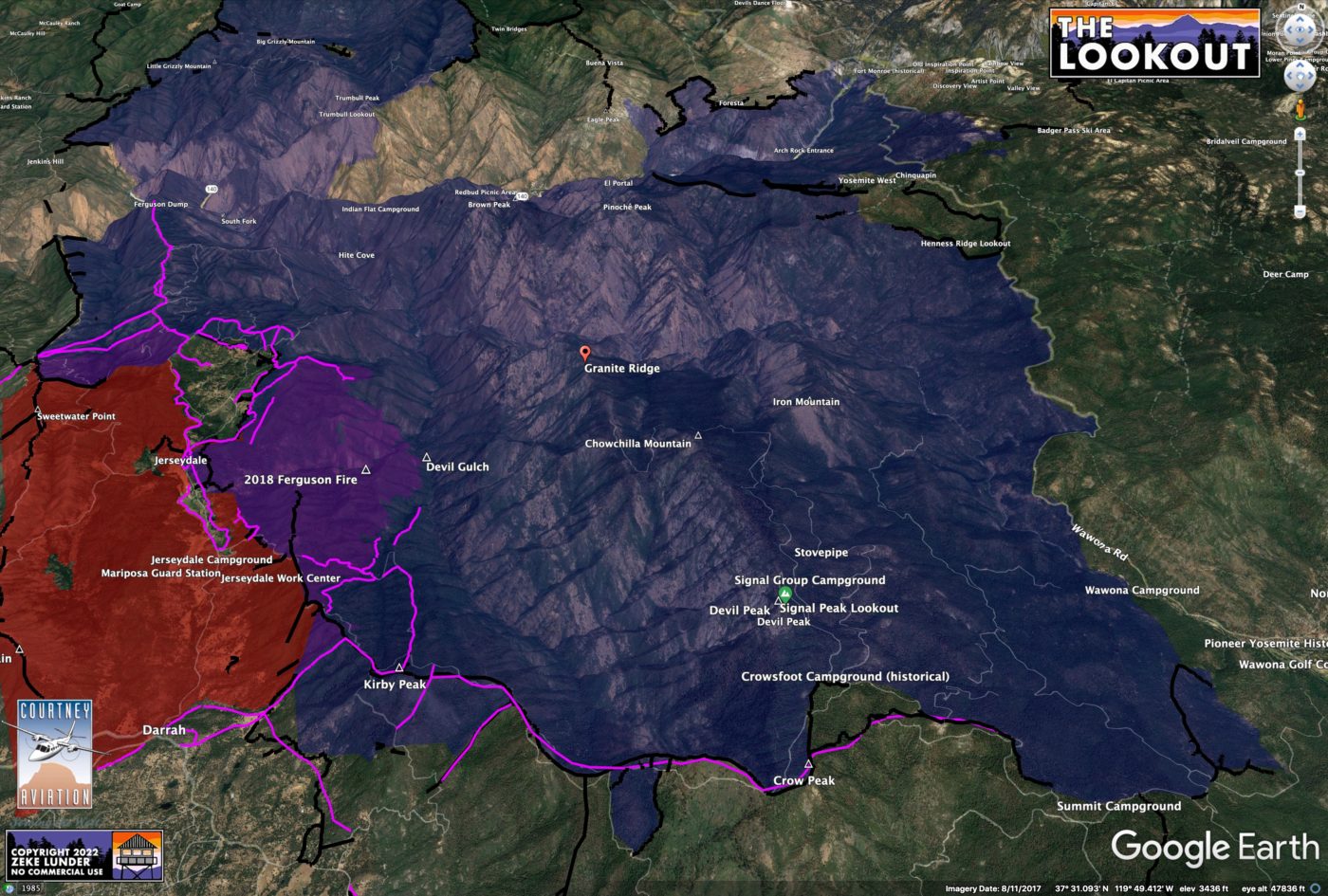 It’s always interesting to see mapped dozer lines inside of the final fire perimeter. These can serve as a cautionary tale to future firefighters that a fireline location may not be be operationally feasible, either because of spotting problems when a terrain-driven fire hits a ridge, or because obstacles like major rock outcrops, cliffs, or steep slopes made it impossible to complete the entire line before the fire got there. Or maybe, there just wasn’t time to prep, fire, and hold the ridge before the fire got there. The map below shows some interior dozer line on the Ferguson Fire. 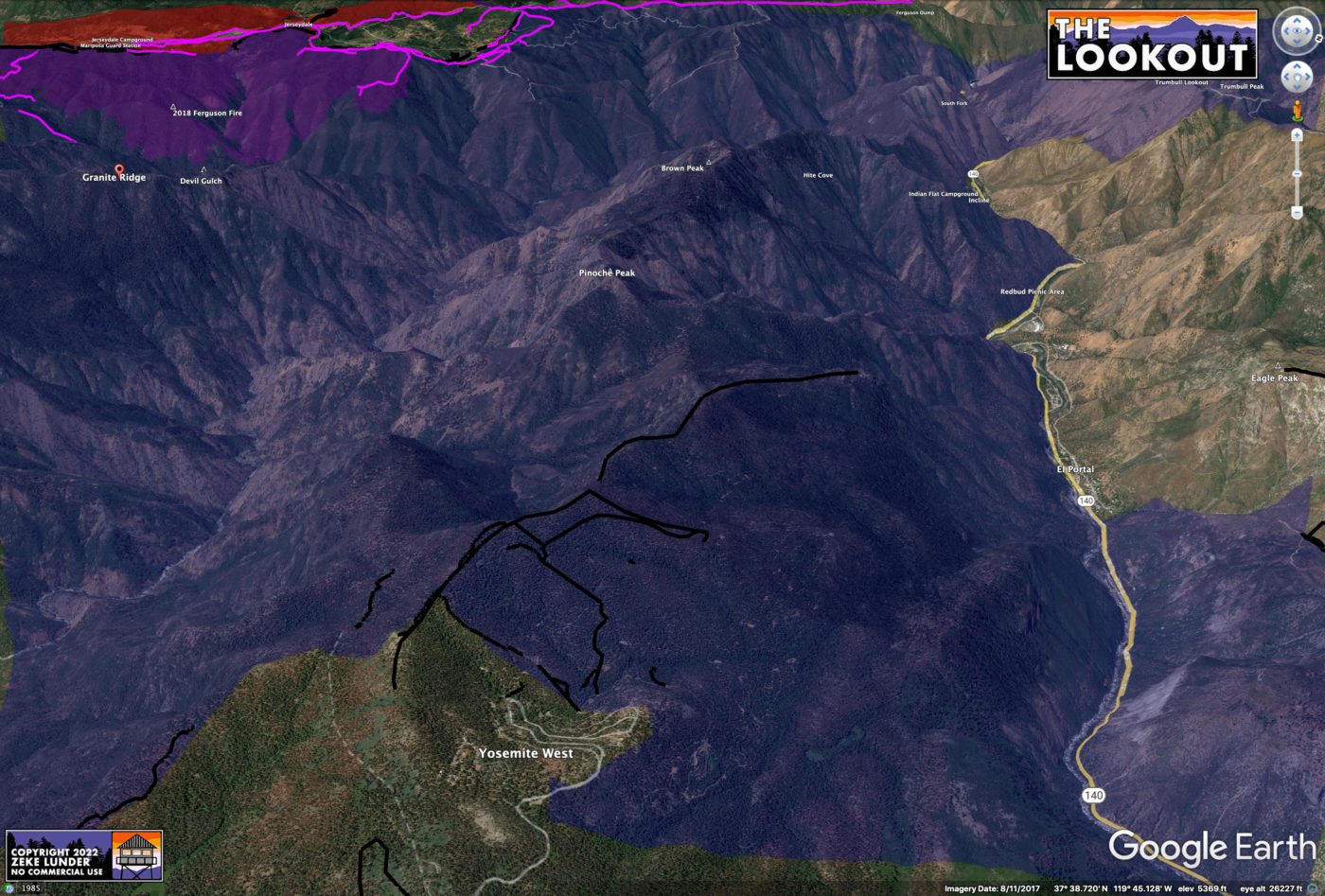 Lots of work going on in very difficult terrain today keep the #OakFire from continuing to spread east. The rest of the fire seems to be wrapping up.