UPDATE:
The new fires on Morgan Summit have grown together and are 10,000 acres. A firing operation along Highway 89 aimed to keep the fire to the east of the Park Road. Firing occurred at the Visitor Center at the old ski area, and I have no intel on any damage to facilities there. Here is a map from this evening. 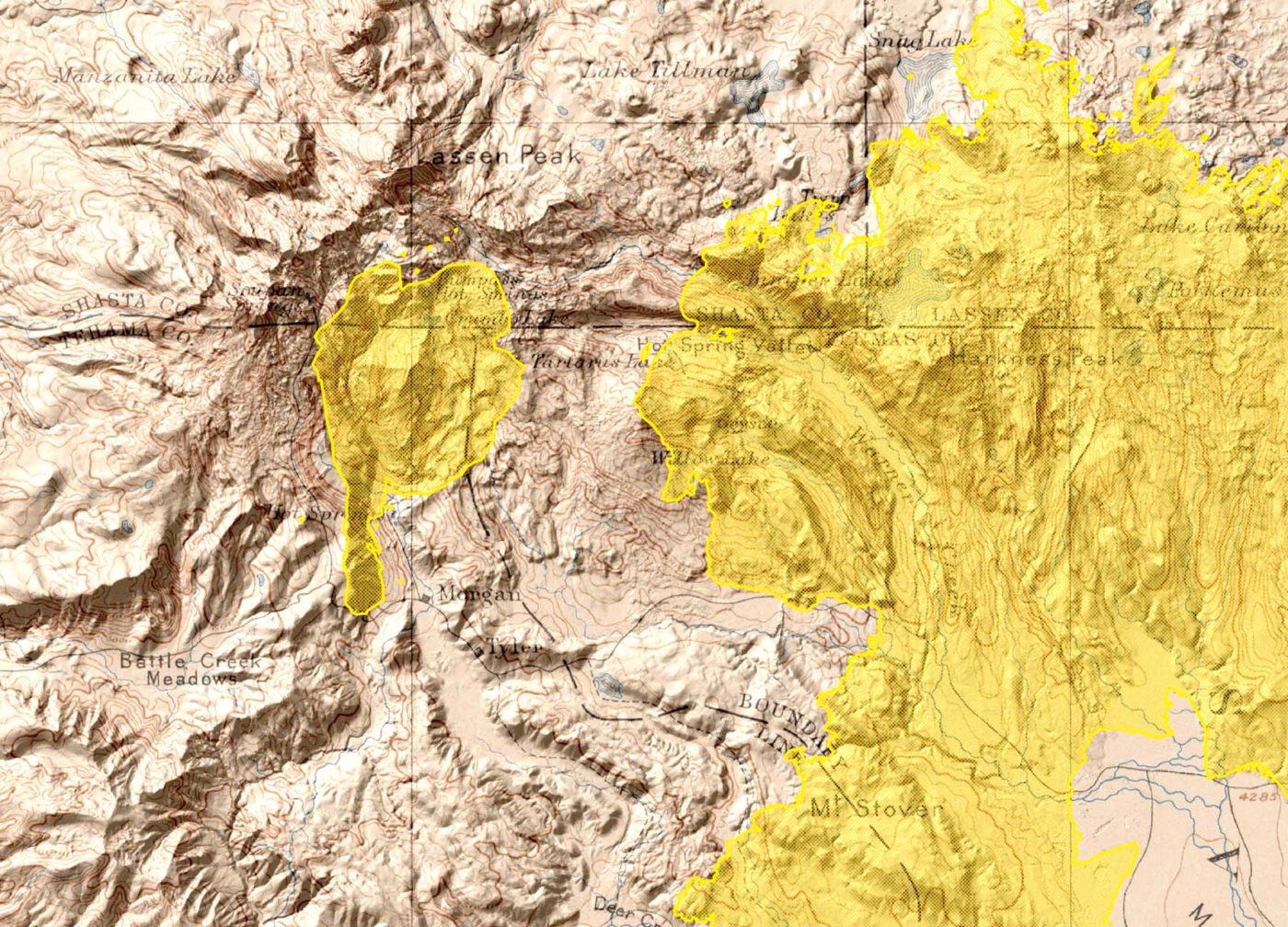 10:20pm: The finger of fire that ran toward Susanville wasn’t the part of the fire we have been watching flank along the 2020 Sheep Fire for the past week, rather it was a flank of the fire on the west side of Coyote Peak that looks like it got tired of just flanking sideways across the mountain and decided to open up a passing lane and become a head fire run. Here is mapping of this part of the fire captured at 6:36 pm. Orange heat spots from yesterday afternoon, and dark red with orange outline is latest info. 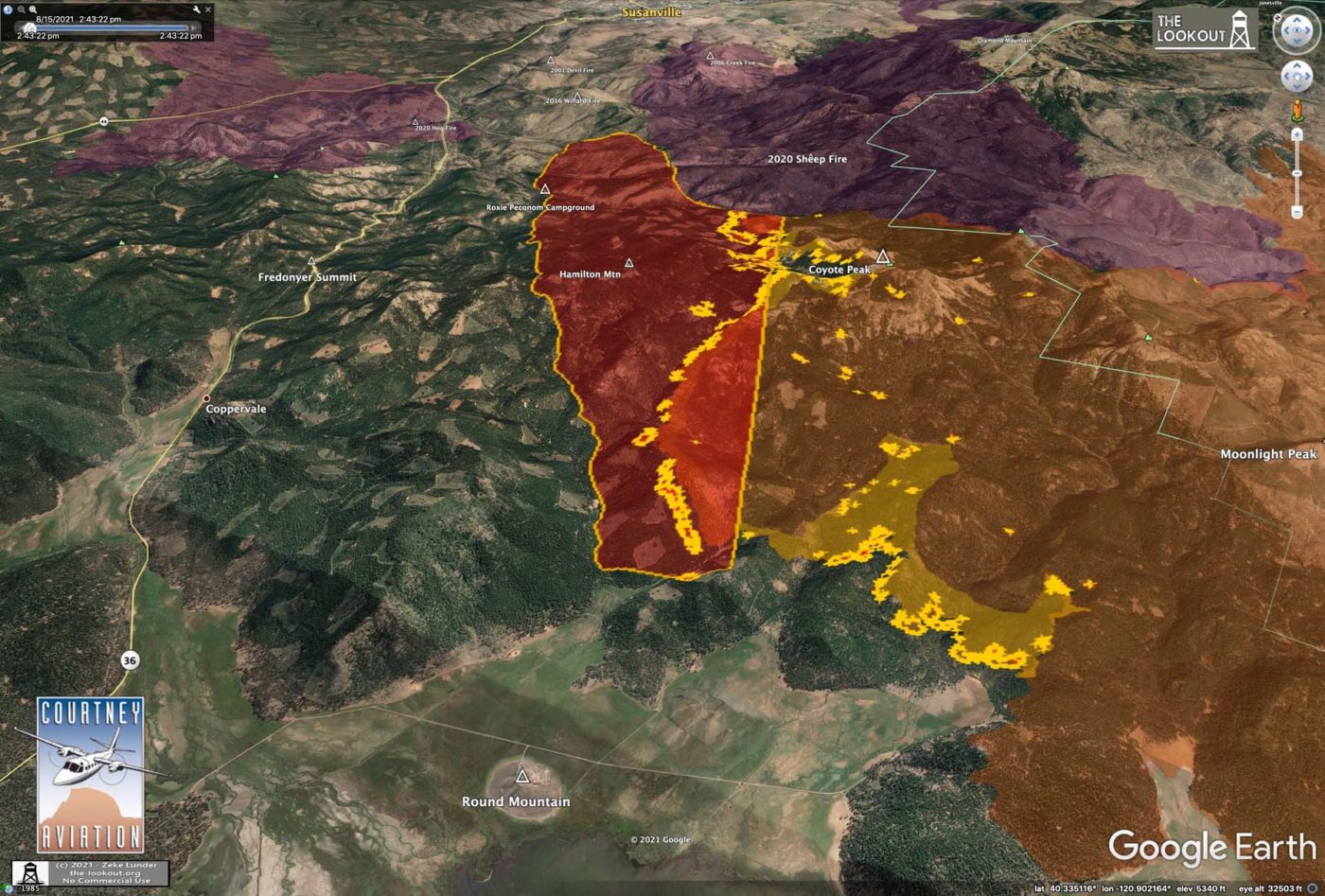 As the fire entered Williams Creek, which drains into the Susan River at Devils Corral, it bumped into salvage-logged and site-prepped areas that had been cleared for replanting following the 2016 Willard Fire, as well as the 2020 Sheep Fire. As it got into this area, the fire entered deep shade from towering smoke columns rising from the fires on Morgan Summit. See below. 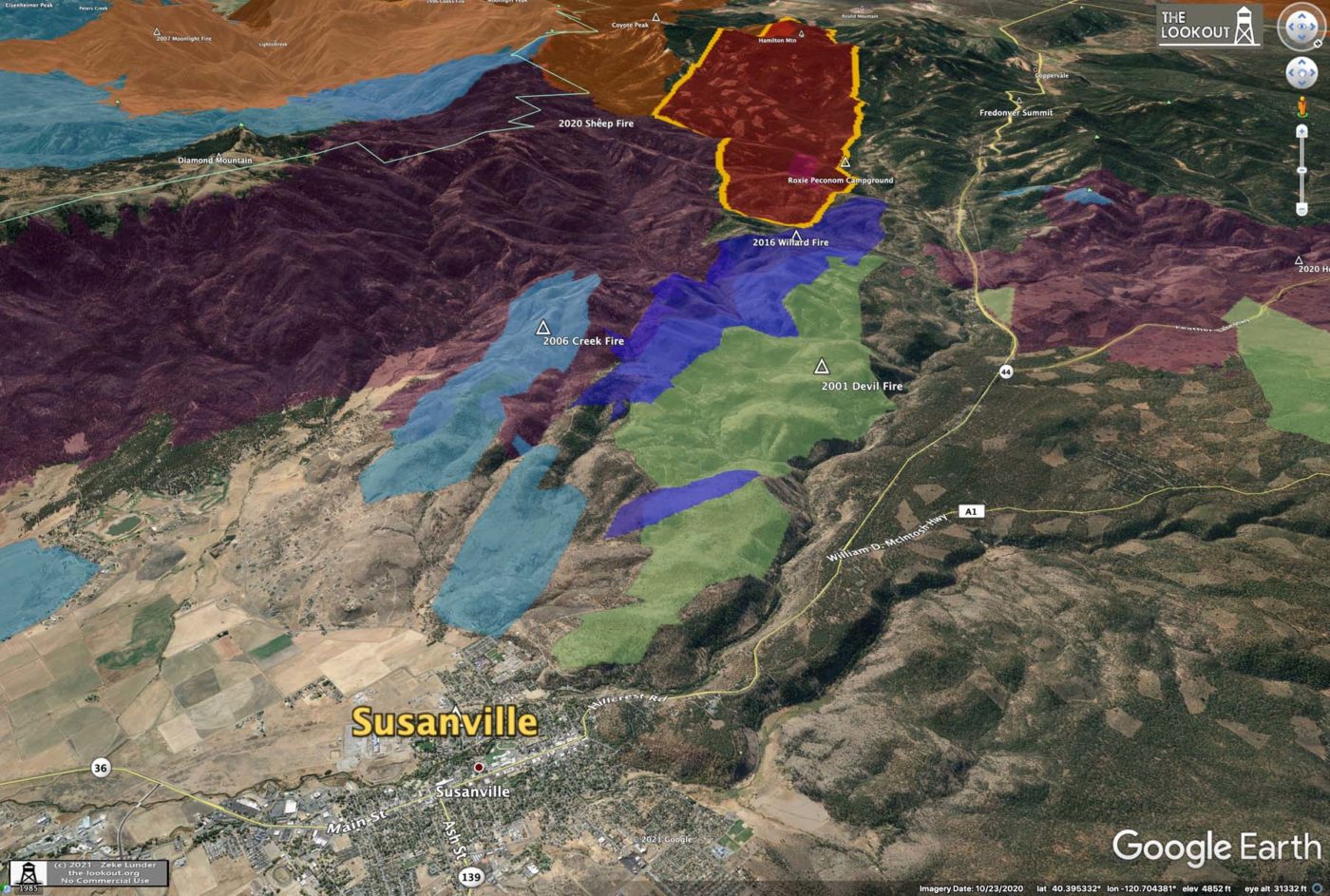 Here is a closeup of the current vegetation conditions in the Willard burn. Hopefully the sparse fuels help keep the fire out of Susanville tomorrow. The area on the right burned in 2020 Hog Fire. 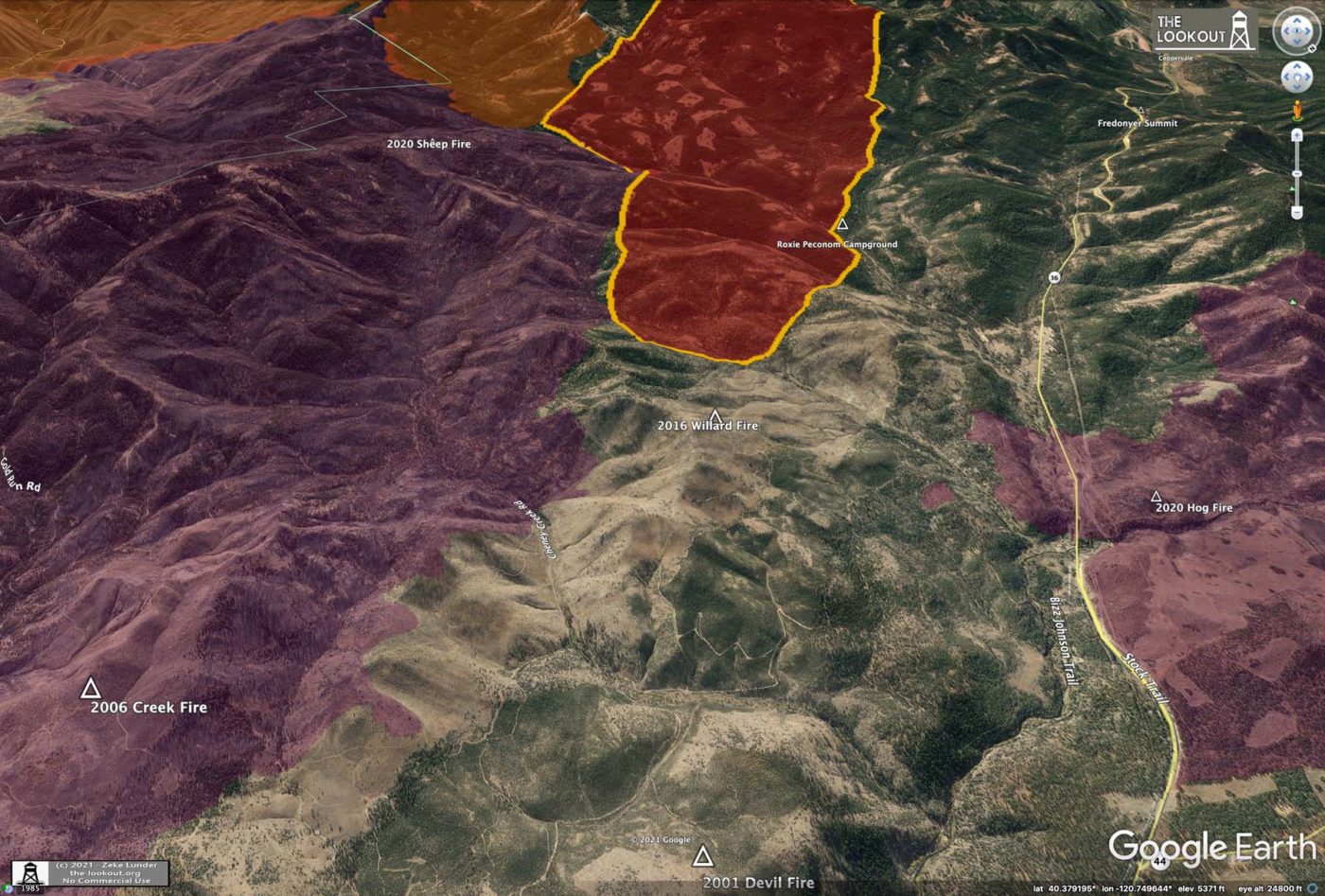 7:40pm: Just got fresh mapping of the fire that is headed toward Susanville. This perimeter (red with orange outline) has outflanked the 2020 Sheep Fire, and headed east.
It was captured at 6:36pm, on August 16, and was 6.5 miles from Susanville at that time. 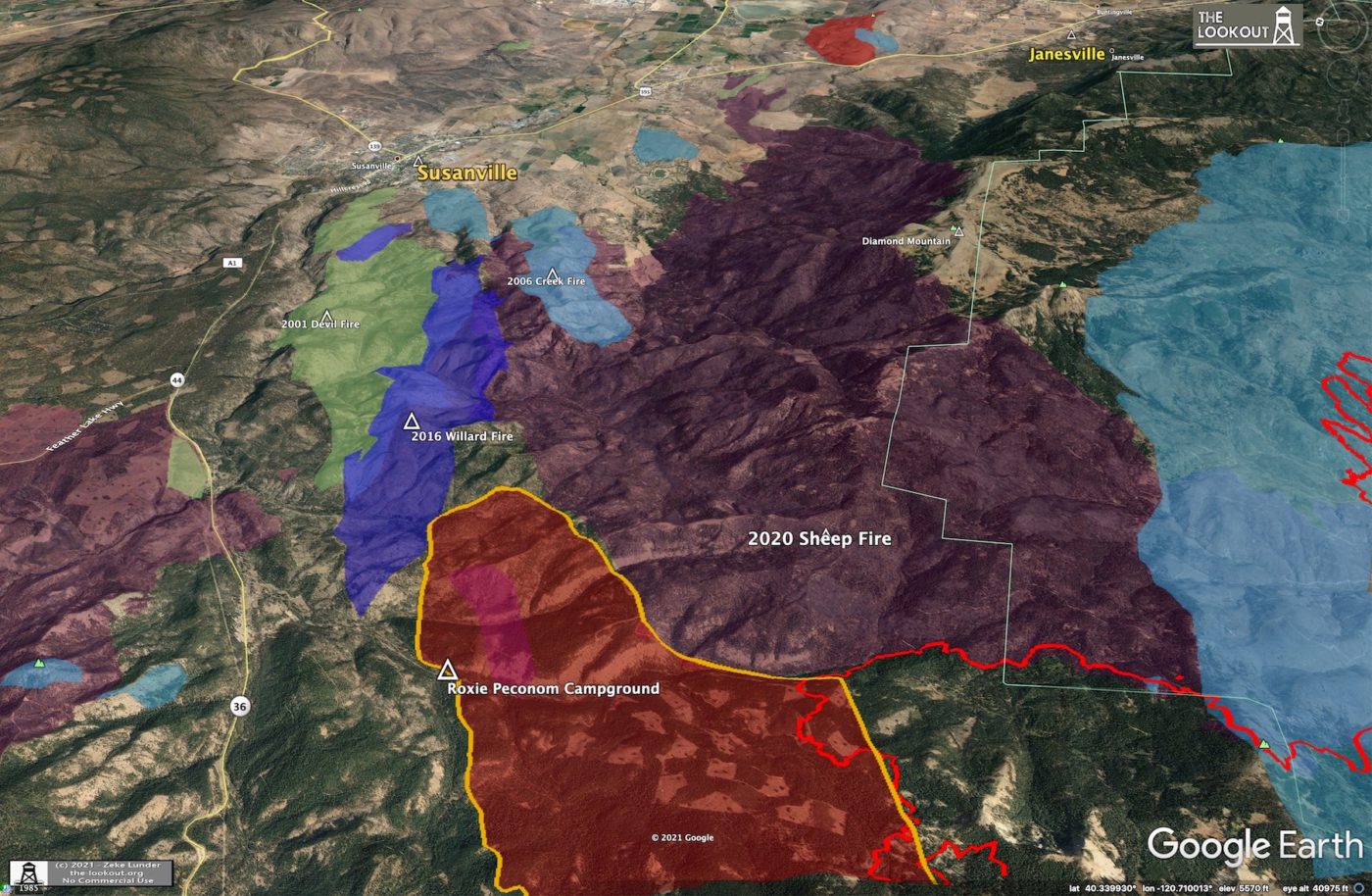 7pm: I talked earlier about smoke being a wildcard in all of this wild weather, and it looks like this is playing out right now. The fires at Morgan Summit have really blown up this afternoon, and their smoke column is shading northern parts of the Dixie Fire. This is a good thing for areas in the deep shade under the column, which looks like it includes a critical piece of the Susan River Canyon where there are worries about the fire running east to Susanville. 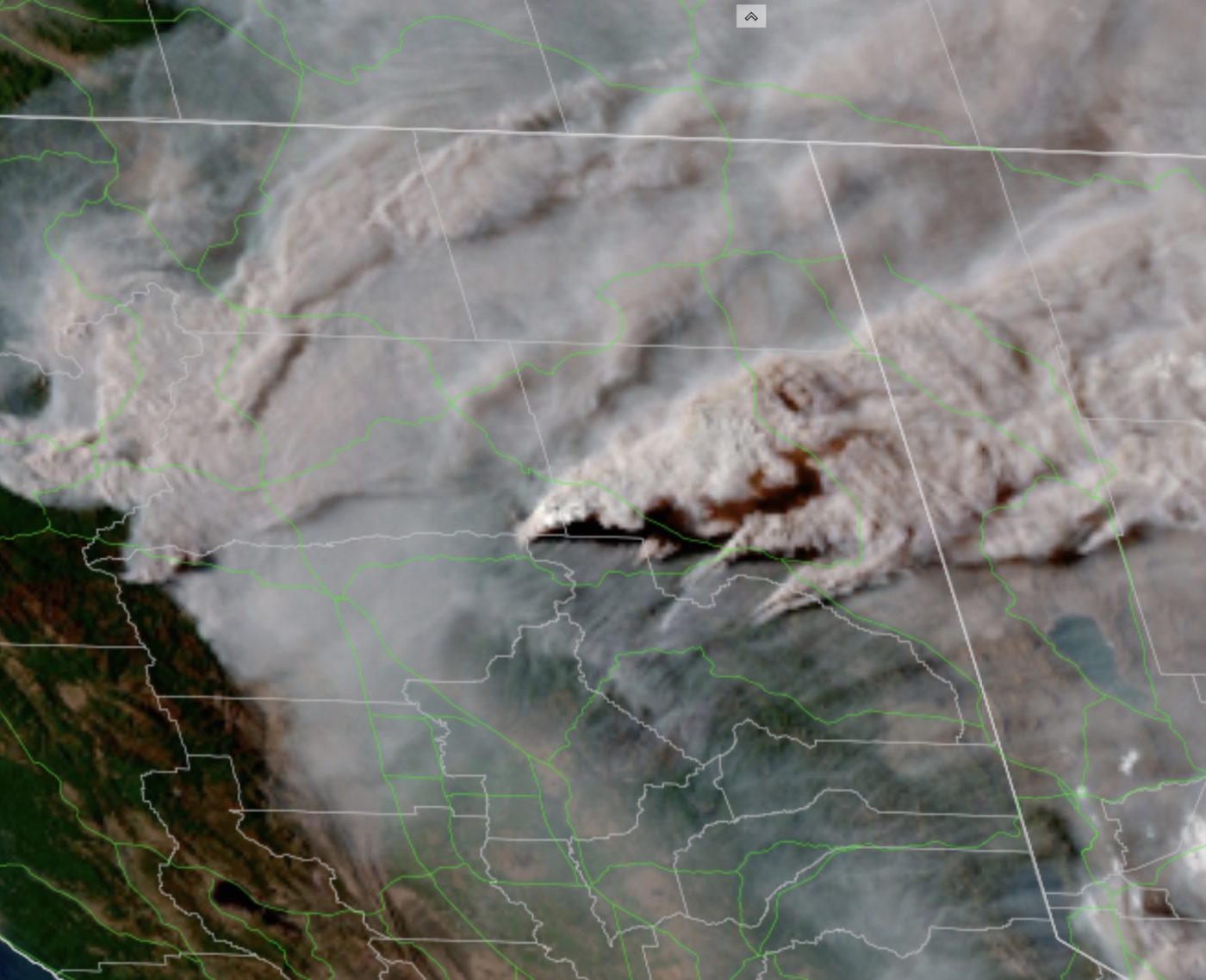 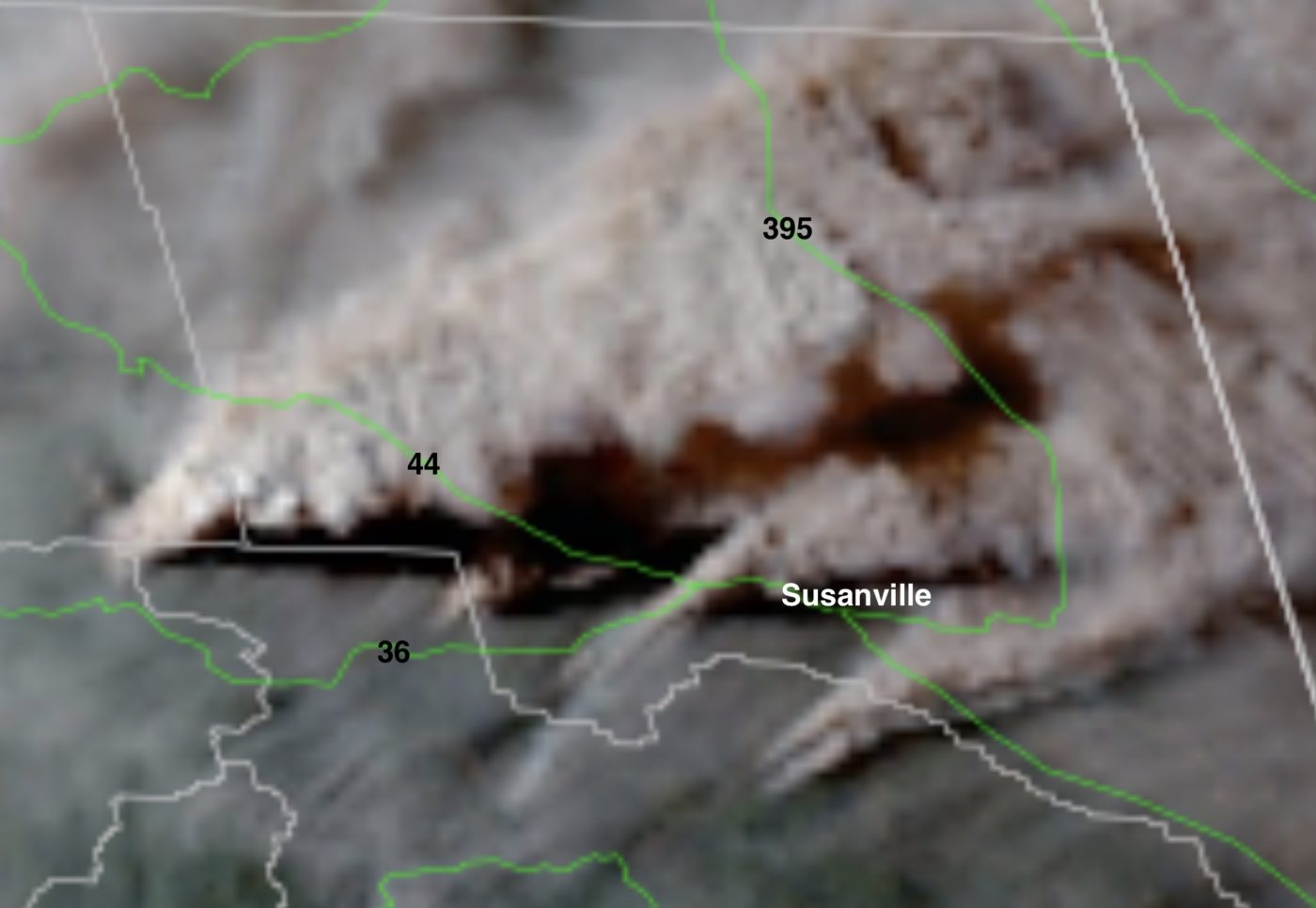 6pm: Intel flight has discovered a 10 acre new fire with several spots of its own, nearly five miles out from main front, 3.75 miles south of Thompson Peak. This fire is already showing on heat satellites.

The map labels it as a spot, but it has been announced as a new fire. Not out of the question it is a spot, though. I was in a briefing in Central Idaho once, 12 miles from the fire and directly under the column, when a smoldering piece of lodgepole bark the size of a skateboard floated lazily out of the red sky into the middle of the crowd. 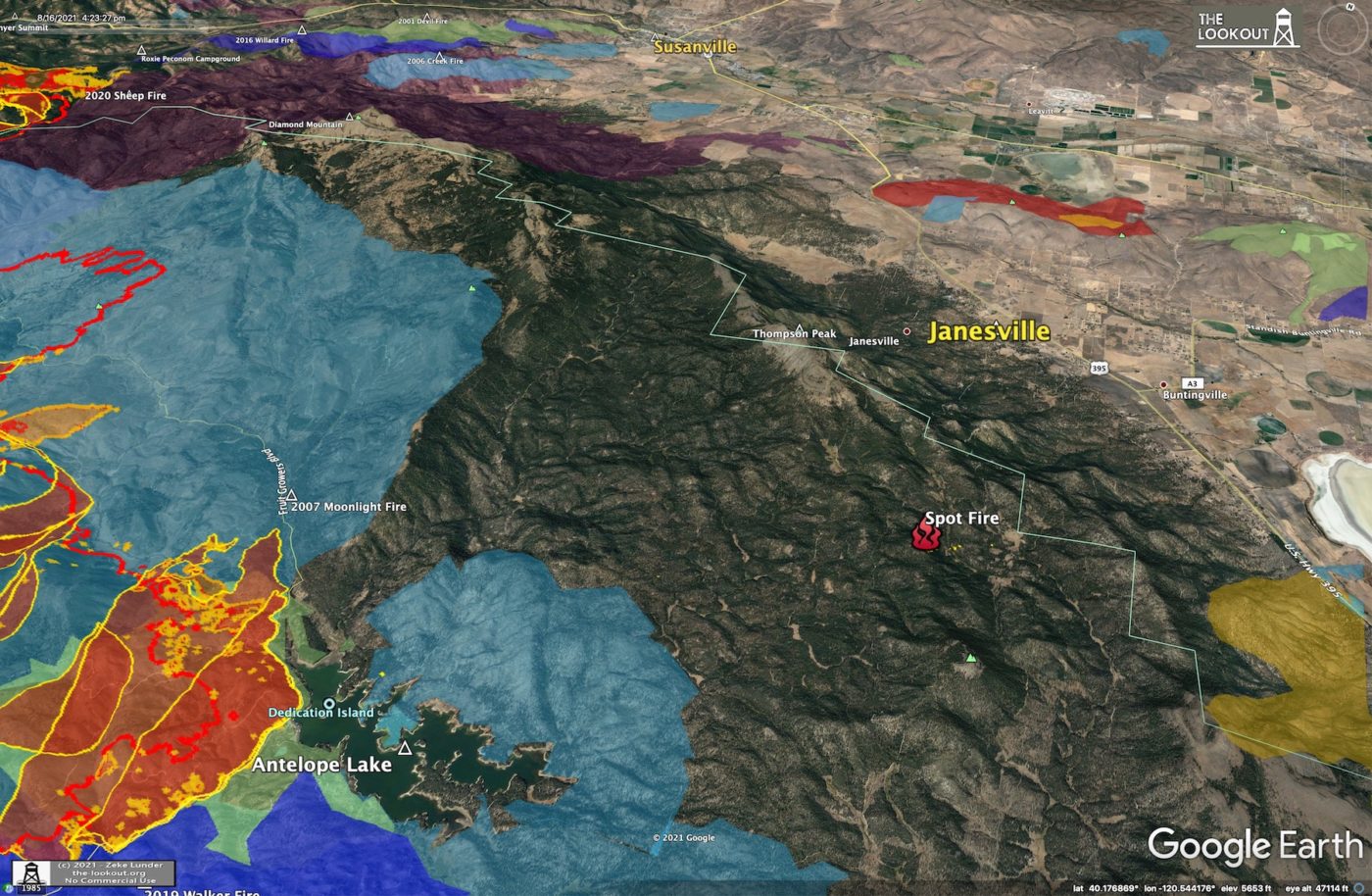 Spot fires are about 4.5 miles from Janesville. 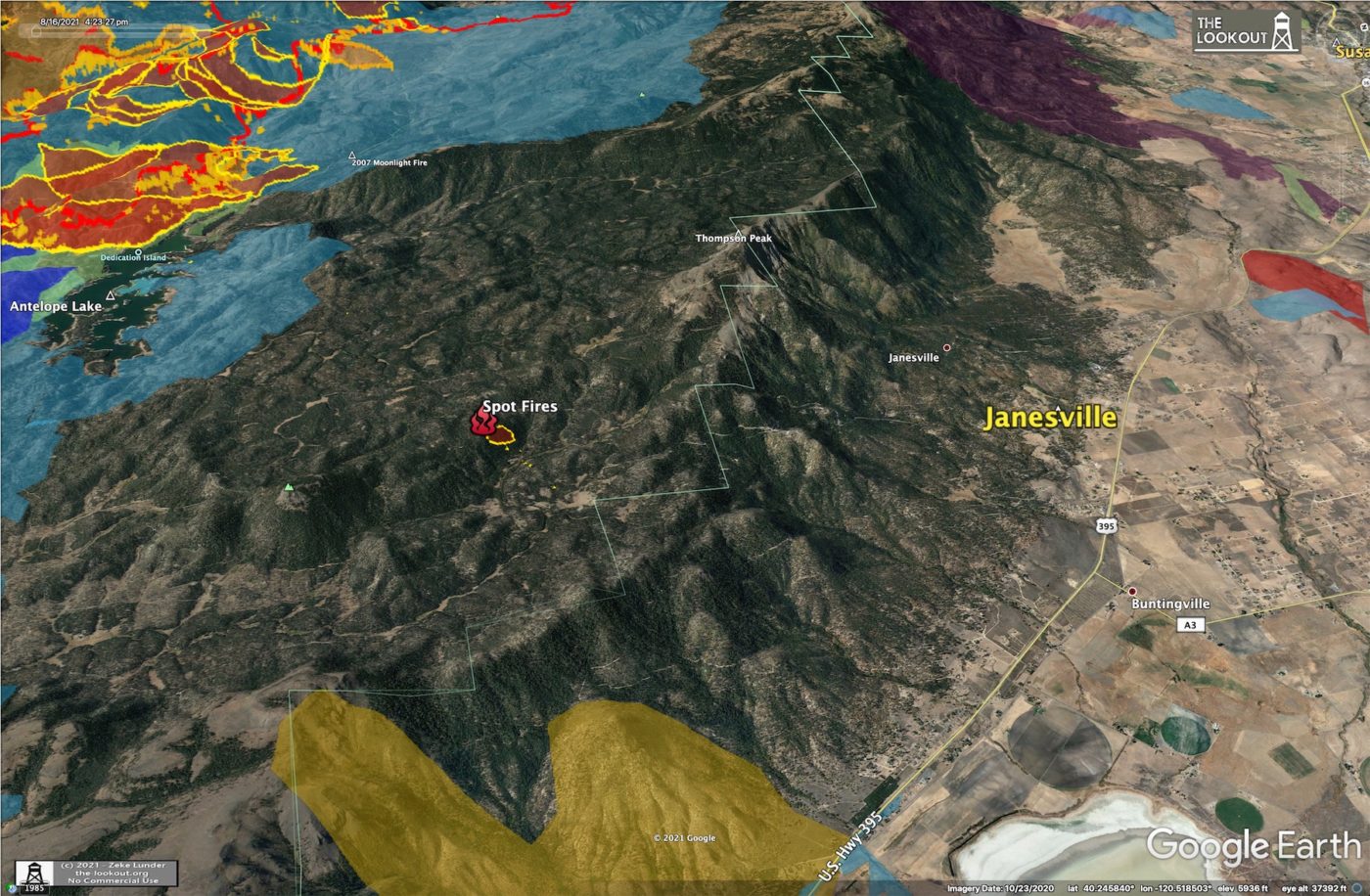 4:45pm: No new threat to Chester, LAW, East Shore or Peninsula at this time.
The bulk of the heat/column on the Antelope Lake side of the fire is not pushing hard on the eastern boundary of the fire, but is burning hot up out of the Peters Creek drainage, and around Taylor Lake.
Fire has burned down to the lake on the south side of Mountain Meadows Reservoir from about Deerheart Creek over to Homer Creek, moving to east, not toward Westwood.
The firing operation along Highway 36 between Rock Creek and Hwy 147 is blowing hard to the NE, north of Westwood Dump toward Duck Lake into an area that already burned a couple nights ago.
Some new spot fires into Clover Valley, across from Silver Lake Road on A-21.

4:25pm: Winds are blowing and there is a lot of heat everywhere that has been active on Dixie past few days.
White lines are Counties, Green lines are Highways.
Left to right heat dots in image below:
Morgan Summit
West of Willow Lake
Warner Valley/Mt. Harkness (Junction of Lassen, Plumas, Shasta Co lines)
East of Chester and firing at Hwy 36/147
Hamilton Mtn/Coyote Peak
Antelope Lake.
The heat near 36/44 junction is worrisome for Susanville. 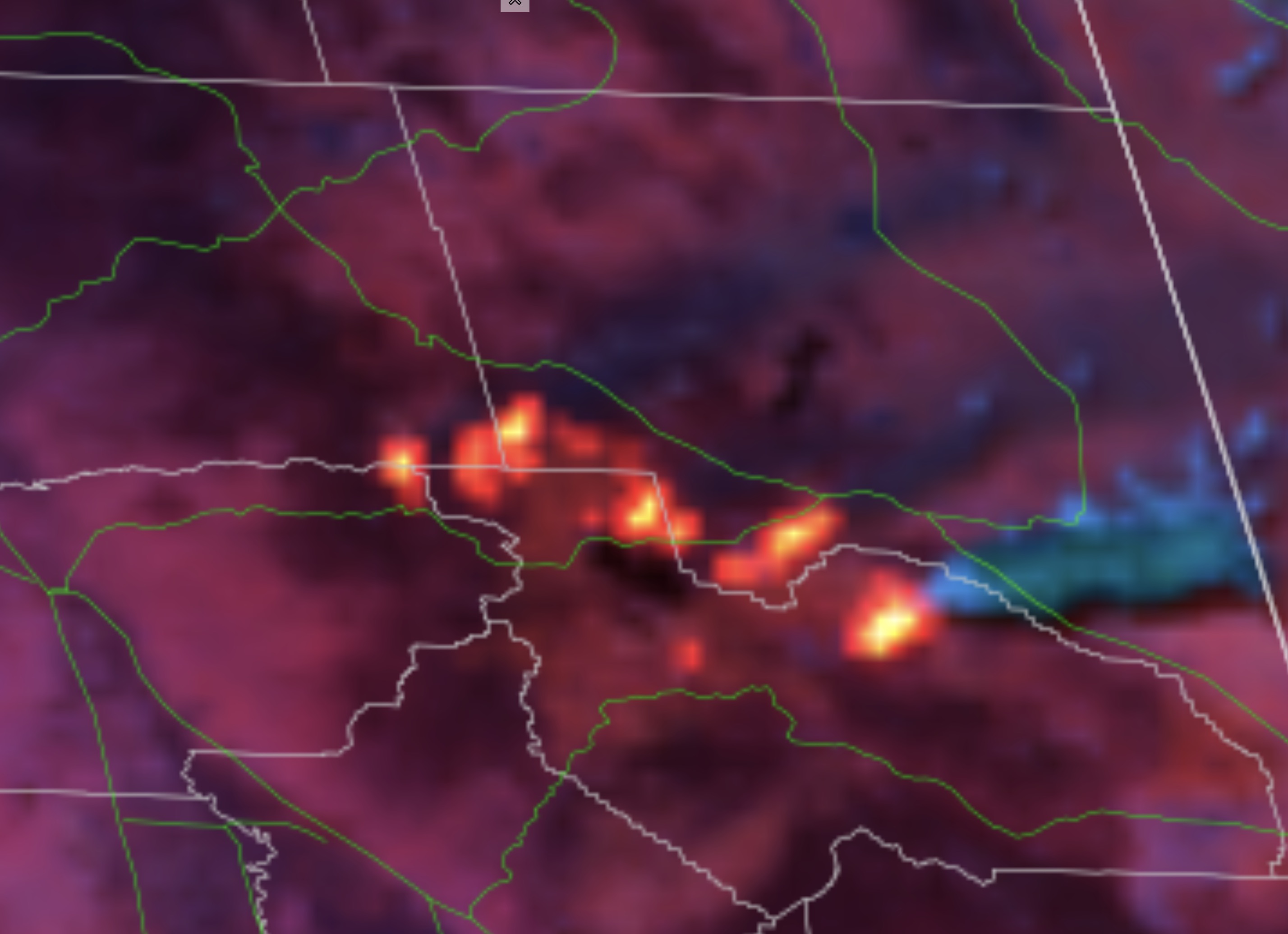 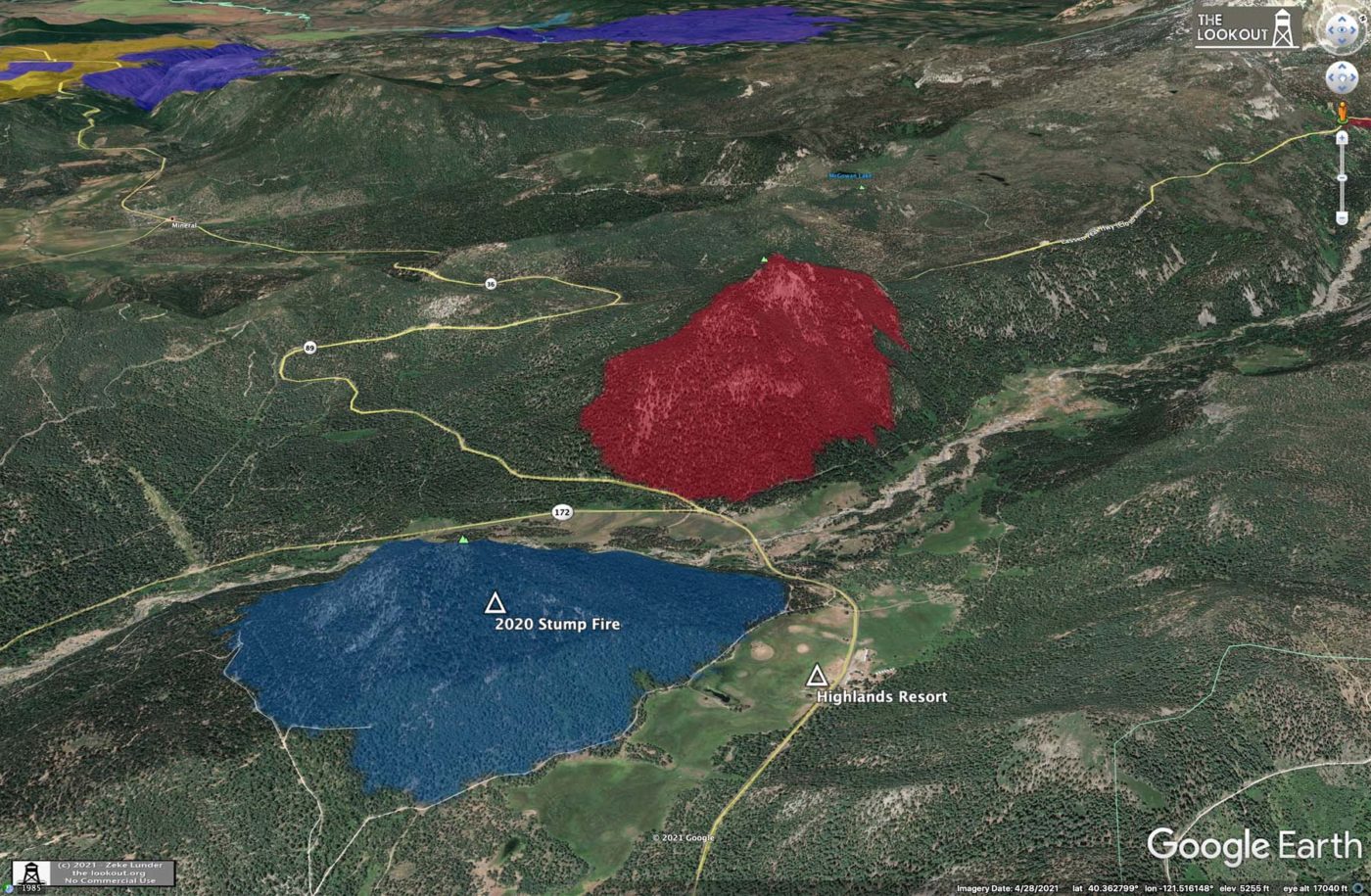 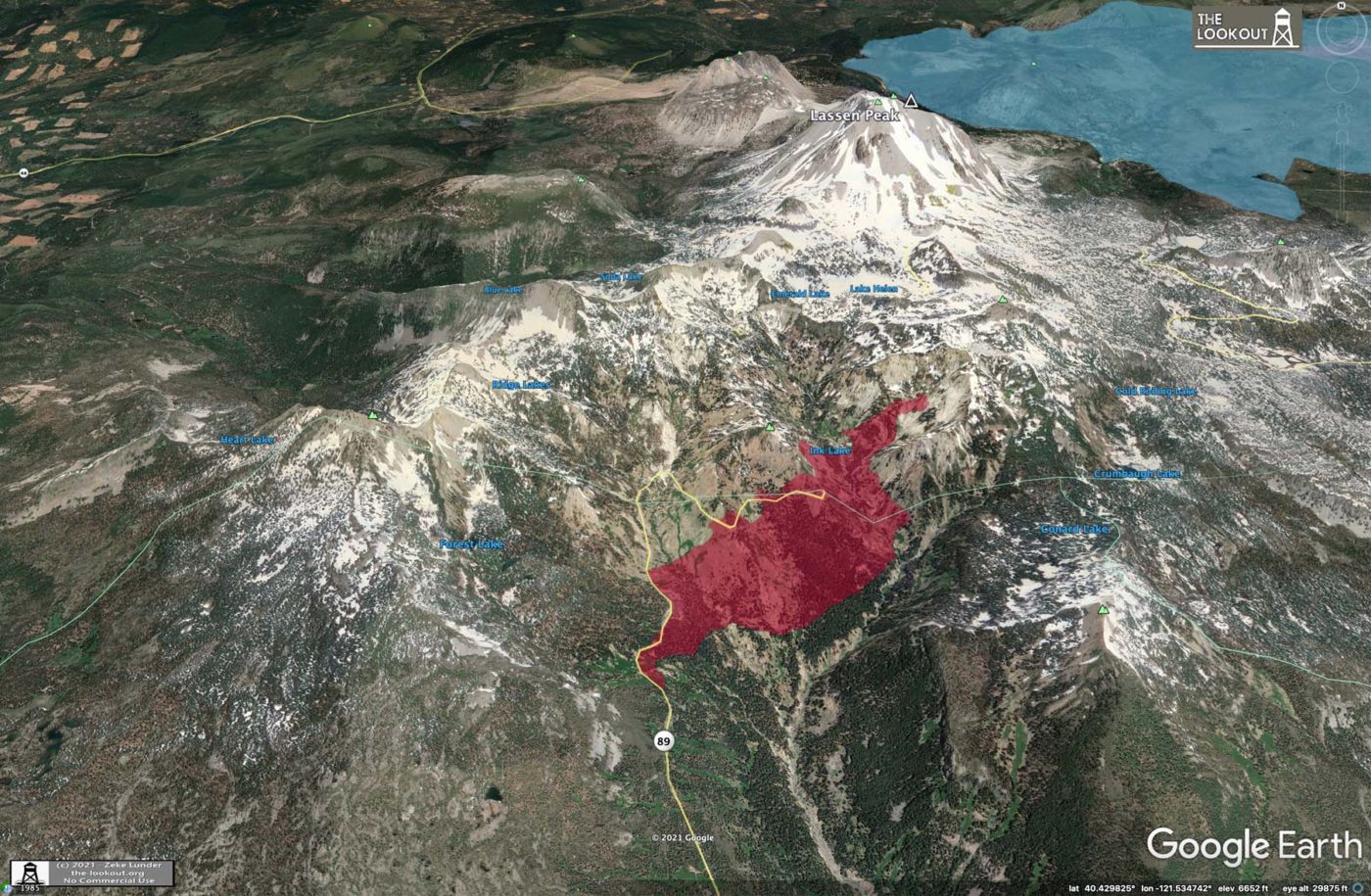 4pm satellite imagery of smoke from Dixie and westside fires. 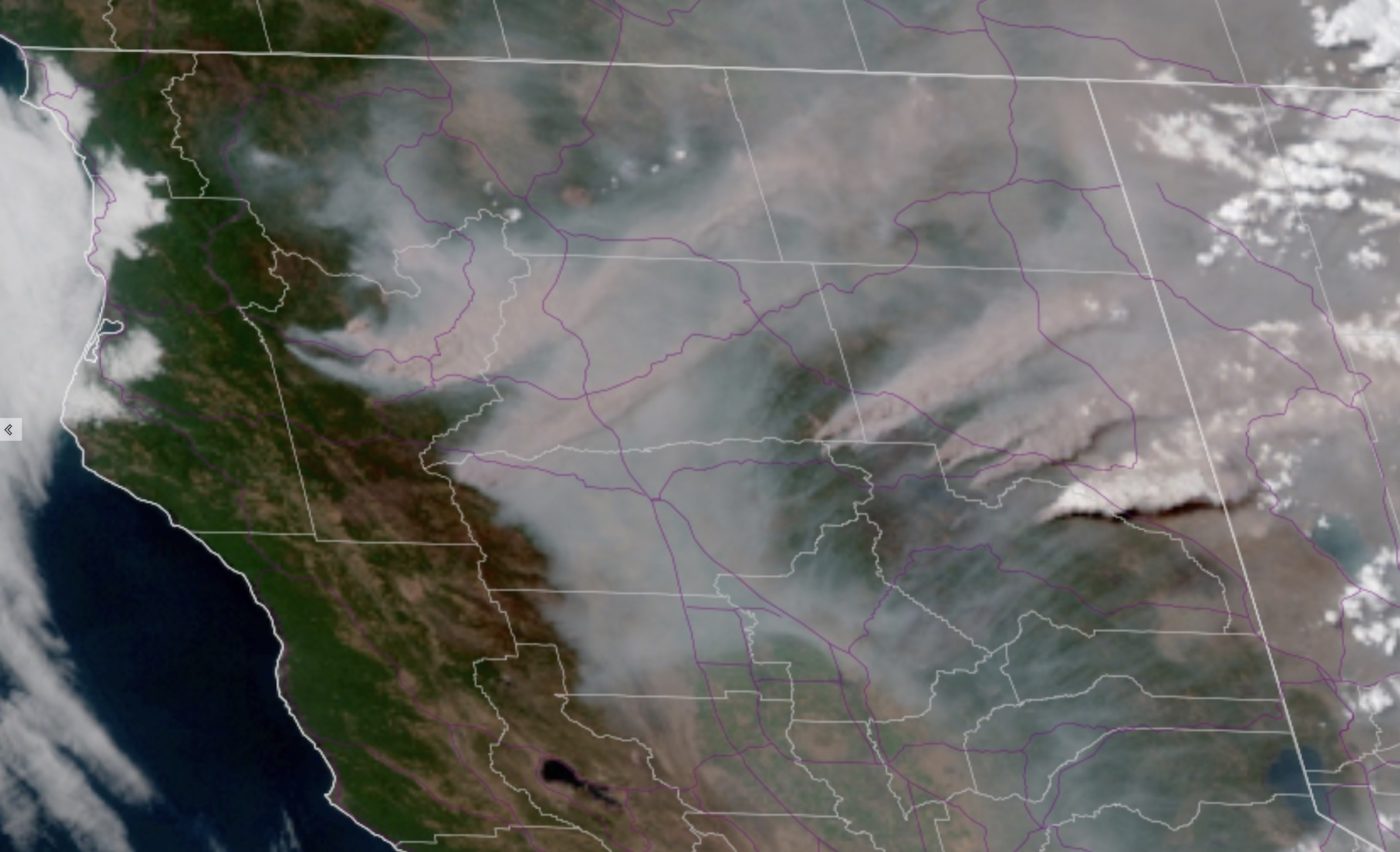 EARLIER POST: Good morning. I just got some IR from last night between 11:00 and 11:30pm. There wasn’t any extraordinary growth on the fire during this period, but areas that have been hot and active all continued to spread. As noted last night, one of the big stories is the aggressive growth yesterday on the lightning fires on Morgan Summit.

The biggest story right now, though, is the upcoming weather. It is forecast to be really bad.

Next 12 hours:
Critical fire weather. Temperatures will be in the triple digits today. The atmosphere will be very unstable. Forecasted winds will be WSW 22 mph with potential for gust up to 30mph. 15% cloud cover. Fire behavior will consist of wind-driven surface fire, isolated torching and spotting. The fire will most likely spread to the North, Northeast, East due to sustained SW winds.

24 hours:
Near critical burn environment (A helpful reader sent me a definition for this – “A Critical Burn Environment results when a combination of sufficiently dry fuels and critical weather conditions are expected. Examples of critical weather conditions are high winds, low humidity, an unstable atmosphere and very hot weather”).  Temperatures will be in the high 90’s and similar over the next few operational periods. Winds will be W 20 mph. 10% cloud cover forecasted during the burning period. Fire behavior would include wind driven surface fire, group torching, crown runs with alignment and spotting. Moderate overnight recoveries may provide opportunity for line construction and firing operations. Expect an increase in fire activity with clear air.

What the wind forecasts seem to suggest is that the fires can make big runs to the SE or east today, and then get pushed more to the south or SW tomorrow. In other words, all over the place. Very dangerous for everyone involved. The fire spread models the overhead teams are running don’t show a huge risk of the fires getting to Susanville or Janeville during this weather episode, but the spread models I have been running thoughout this fire have consistently underpredicted the spread of the Dixie Fire, so anybody in these places should remain vigilant.

One wildcard to throw into the weather: Smoke. The fires in the Coast Range and Trinity River are also ripping, and pushing up a ton of smoke. If it is laying over Dixie, it may help moderate temperatures and raise humidities a little. Hard to say how much, but there is a chance. This image shows smoke from McFarland Fire west of Red Bluff at 10am, today. 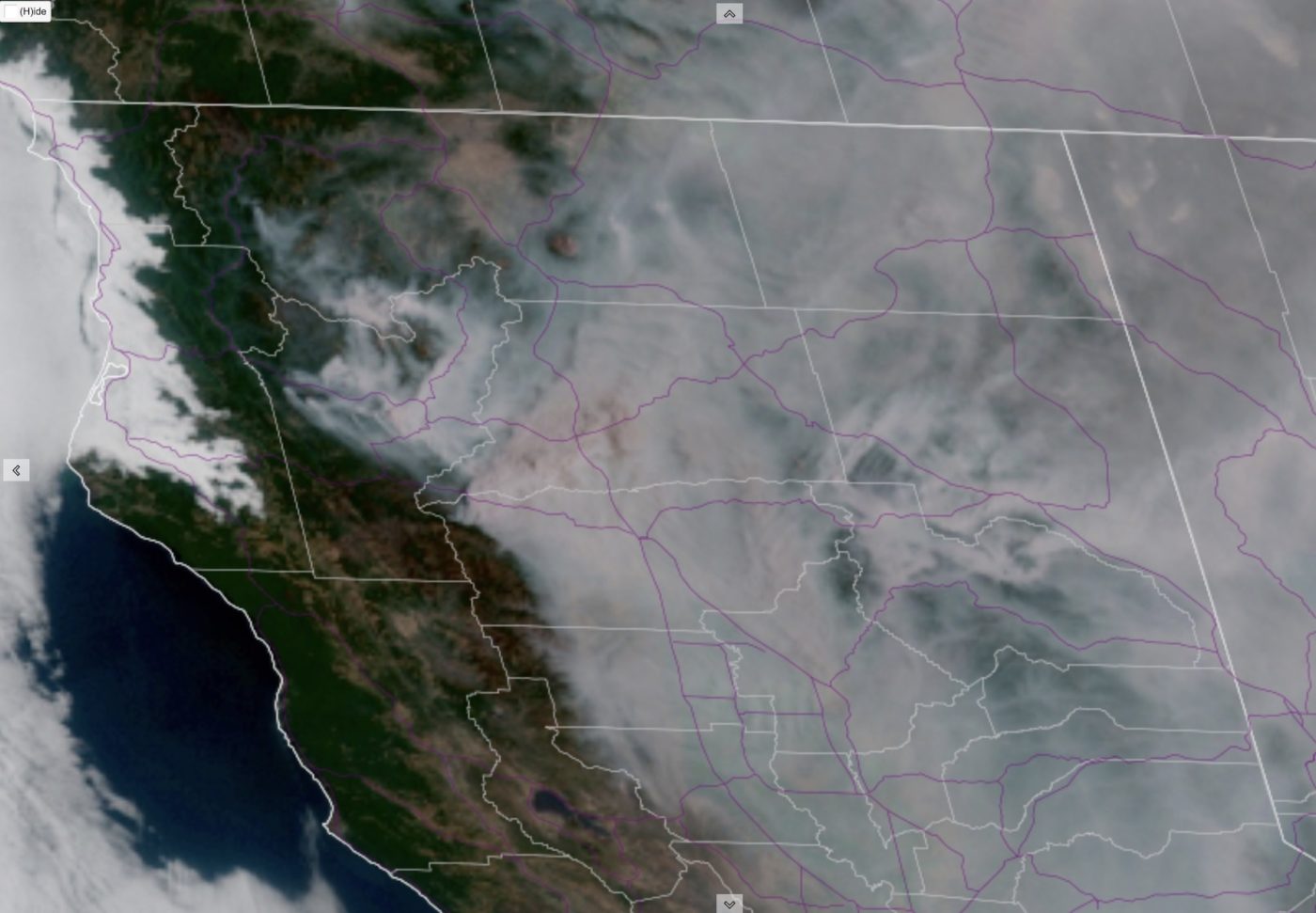 Here are updated IR maps from last night, 8/15/2021 between 10:30 and 11:00 pm. White line shows 24 hour spread.
The firing operation along Highway 36, north of Clear Creek appeared to be holding, with some spotting toward the interior. 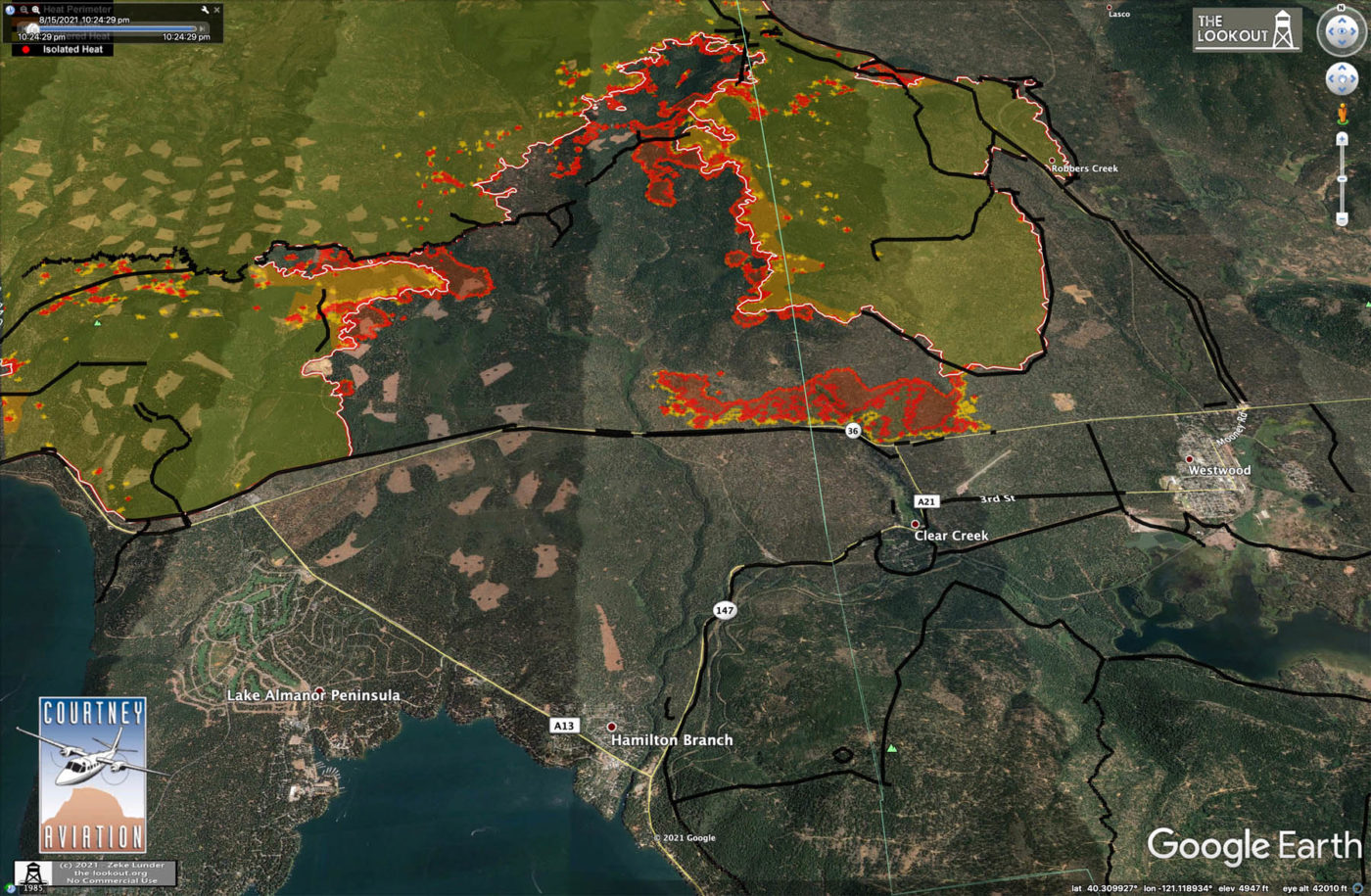 There was active growth on the western flank, but Drakesbad had not been impacted. 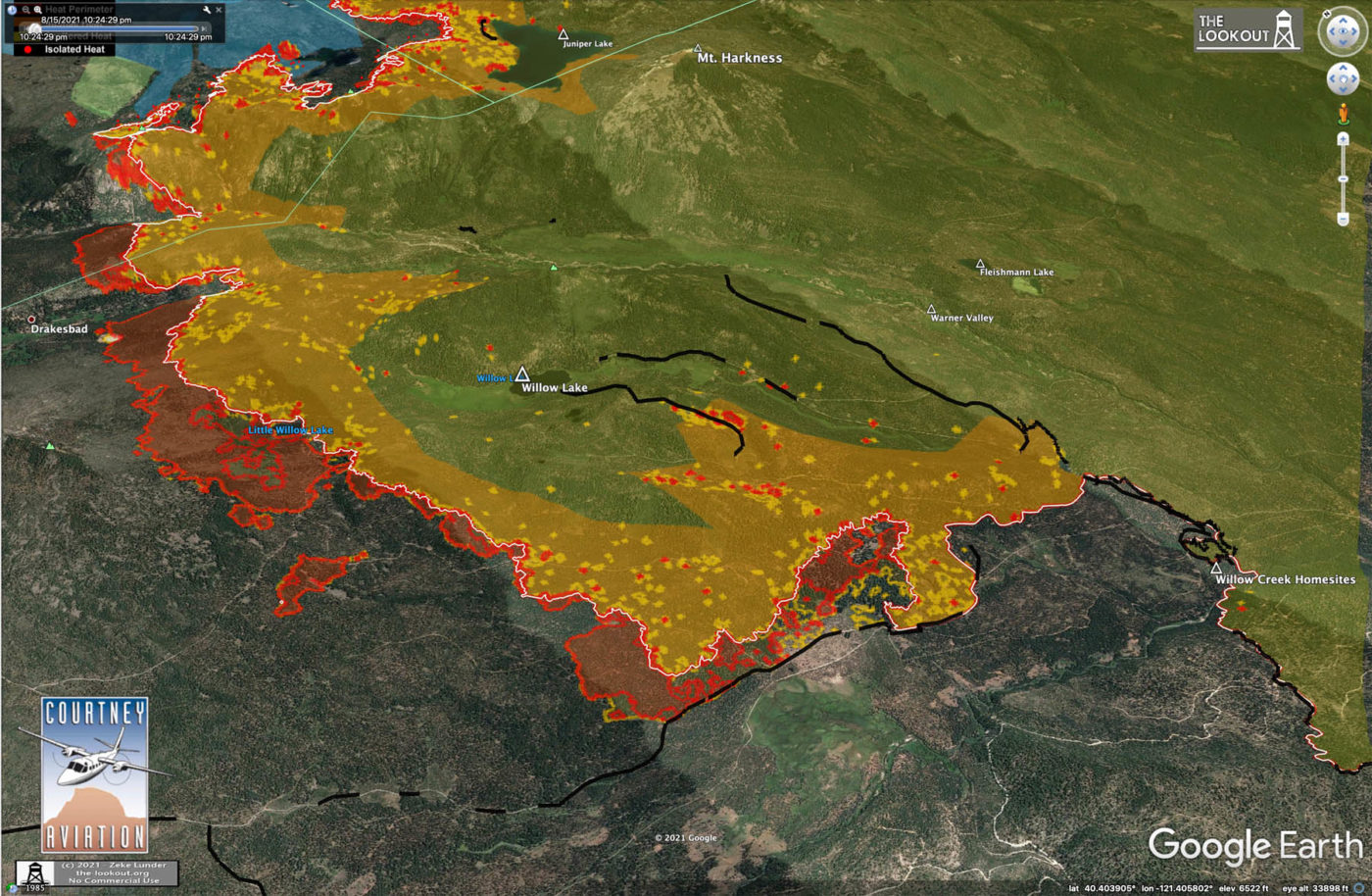 Continued slow spread on north side of Keddie Ridge, with scattered heat from firing operations along the main logging haul road east of Deerheart Creek. 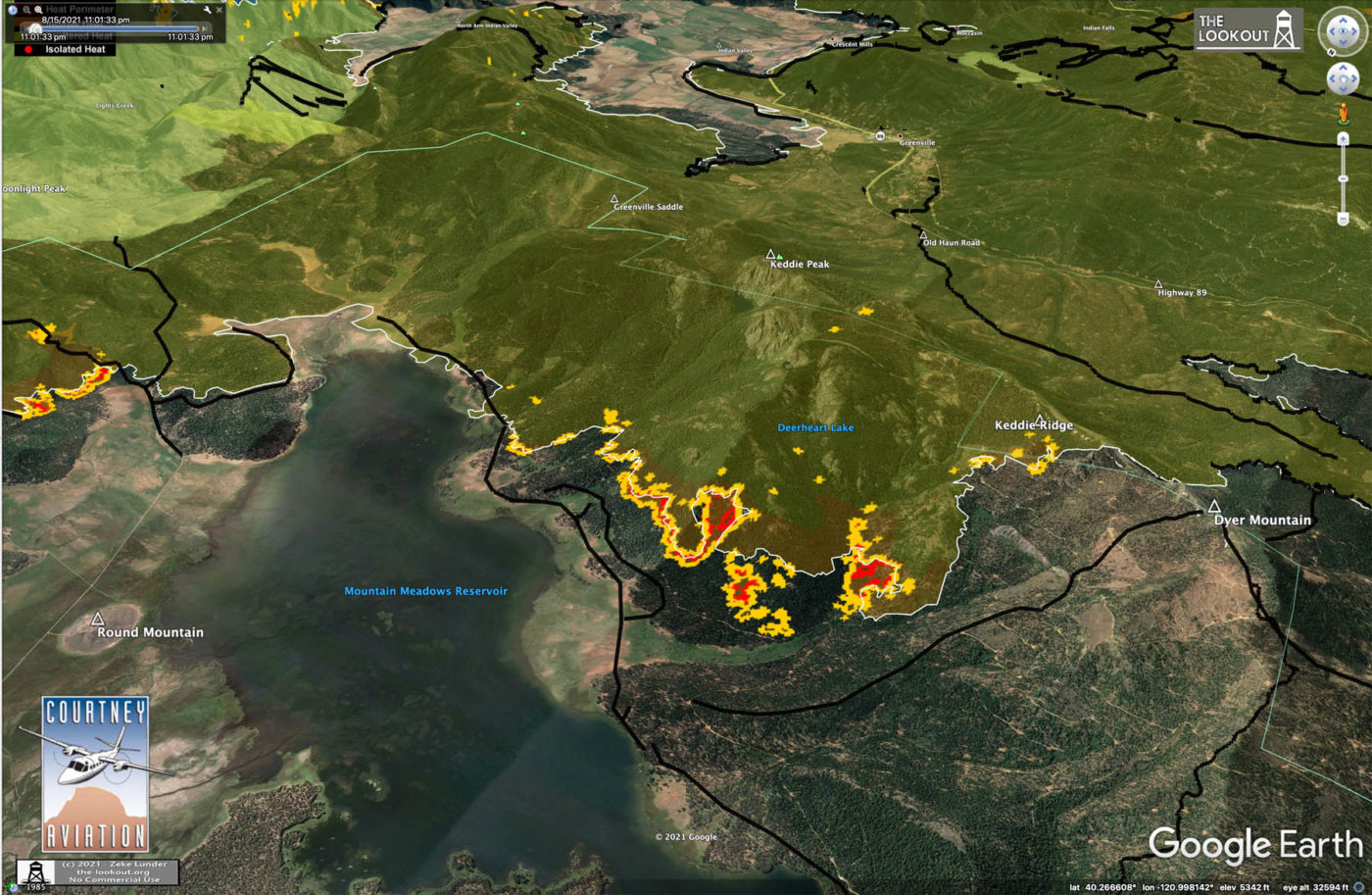 Continued fire spread  up Peters Creek, though the fire had not yet crossed onto the north-facing slope. Southern tip of Keddie Ridge is looking pretty cold. 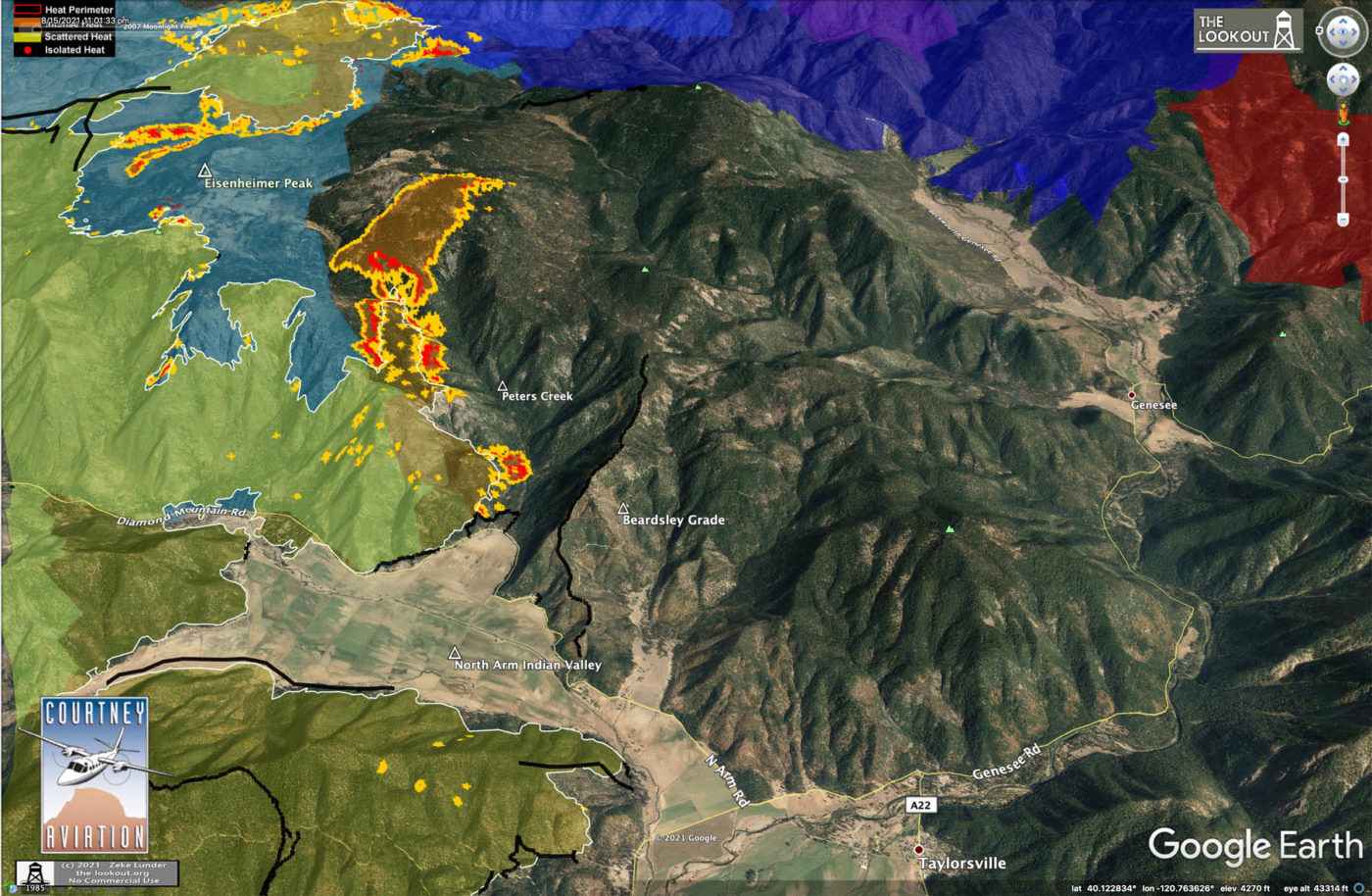 Spread in all directions on the head of the eastern part of the fire at Antelope Lake. There was a spot fire across the Lake that was mapped by an intel flight, and it isn’t showing up here, so they must have hooked it. Most of the areas this part of the fire ran into private timberlands salvage logged and replanted after 2007 Moonlight Fire are looking cold. There has been minimal spread into the 2019 Walker Fire footprint. The Genesse/Antelope Lake Road runs down the middle of this image. 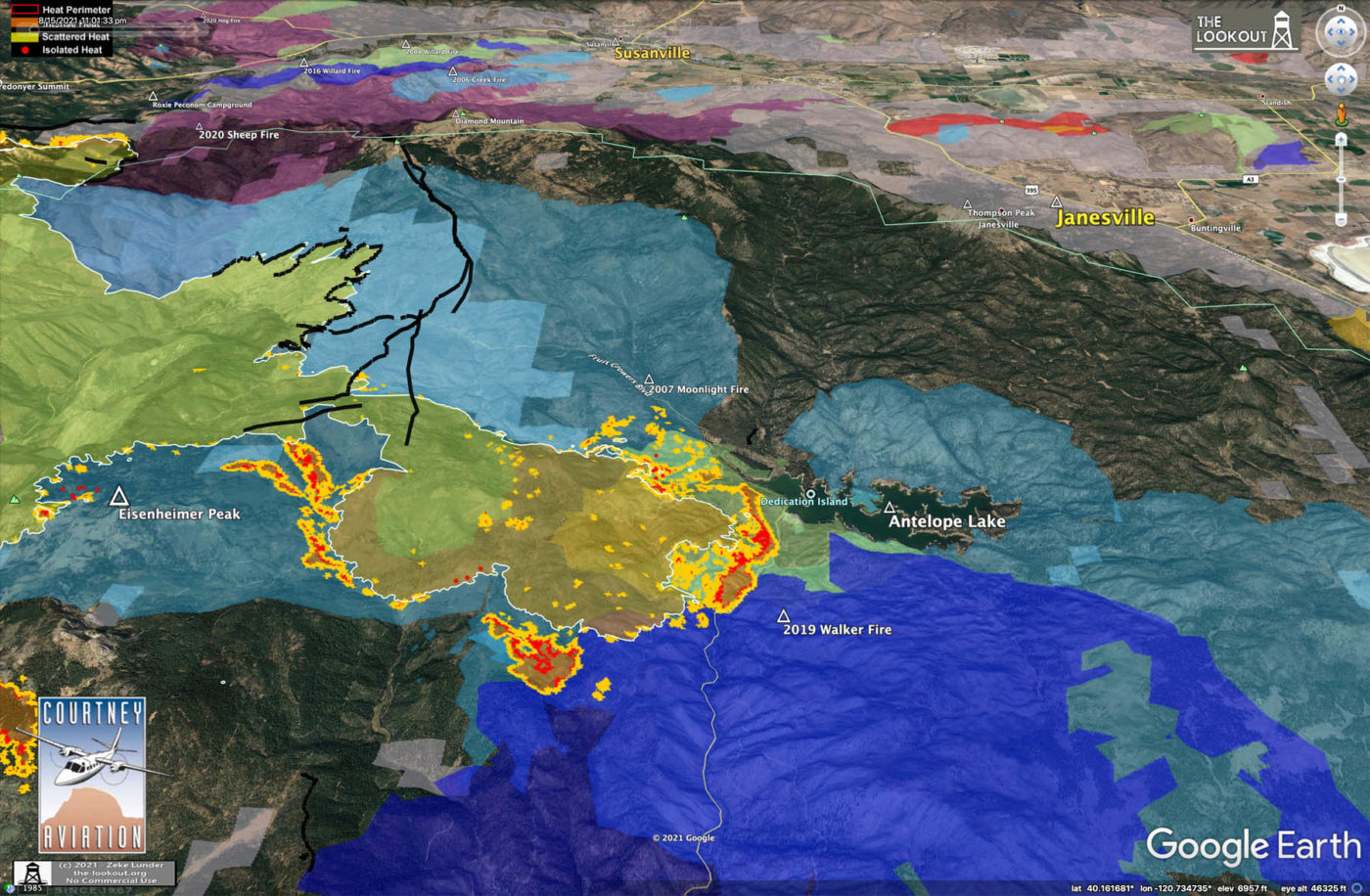 The fire on east side of Coyote Peak, south of Fredonyer Summit, continues to flank down Willard Creek. With strong winds, there is sufficient grass in the Sheep Fire to carry the fire, though not at a high intensity. This area of the fire is problematic given the upcoming weather, and also, the fire history here, as discussed yesterday and shown on the left side of this image. 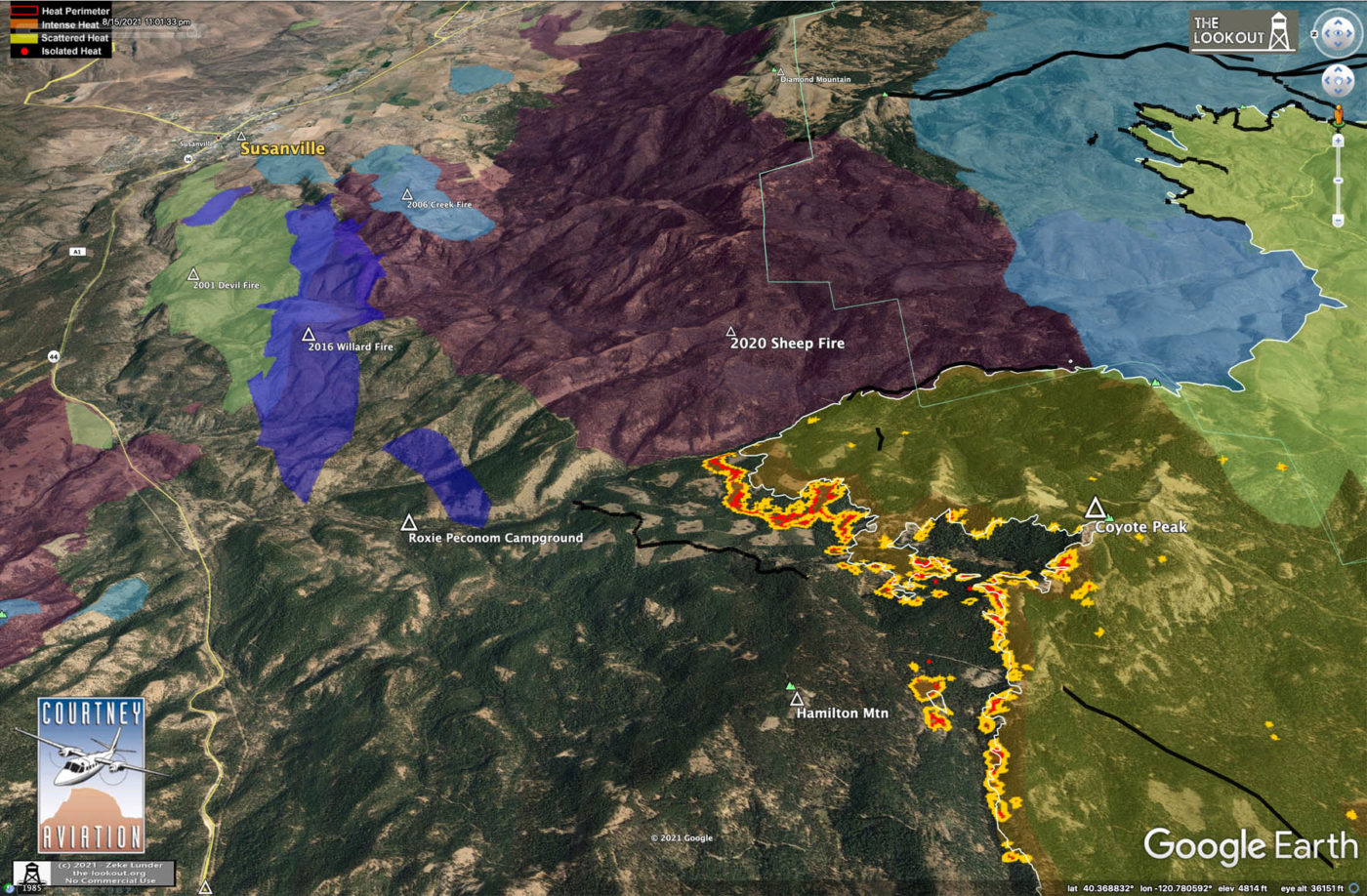 This area along the Susan River is a major landscape-scale wind tunnel between the Sierra and Cascade Mountain Ranges, and there is a real chance the fire could run toward Susanville in next 48 hrs. 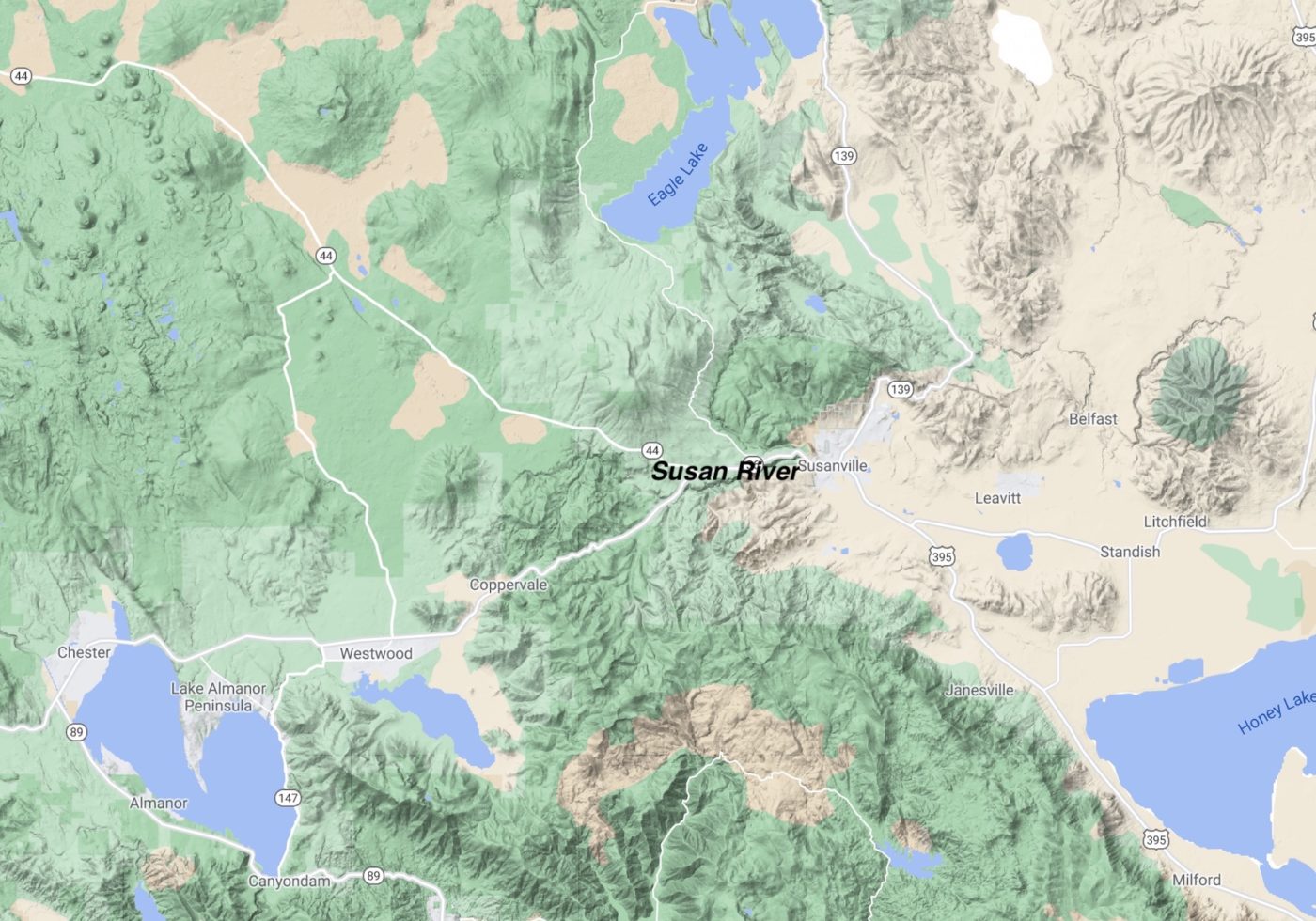 Another look at the fire on Coyote Peak, south of Fredonyer Pass. Much of this land is covered with thickets of white fir. There was heavy beetle kill here during the droughts of the mid-1990s, and some salvage logging took place, but in general, there hasn’t been much management on the public lands here since then. However, most of the area impacted so far by the Dixie Fire here is privately owned (white overlay). 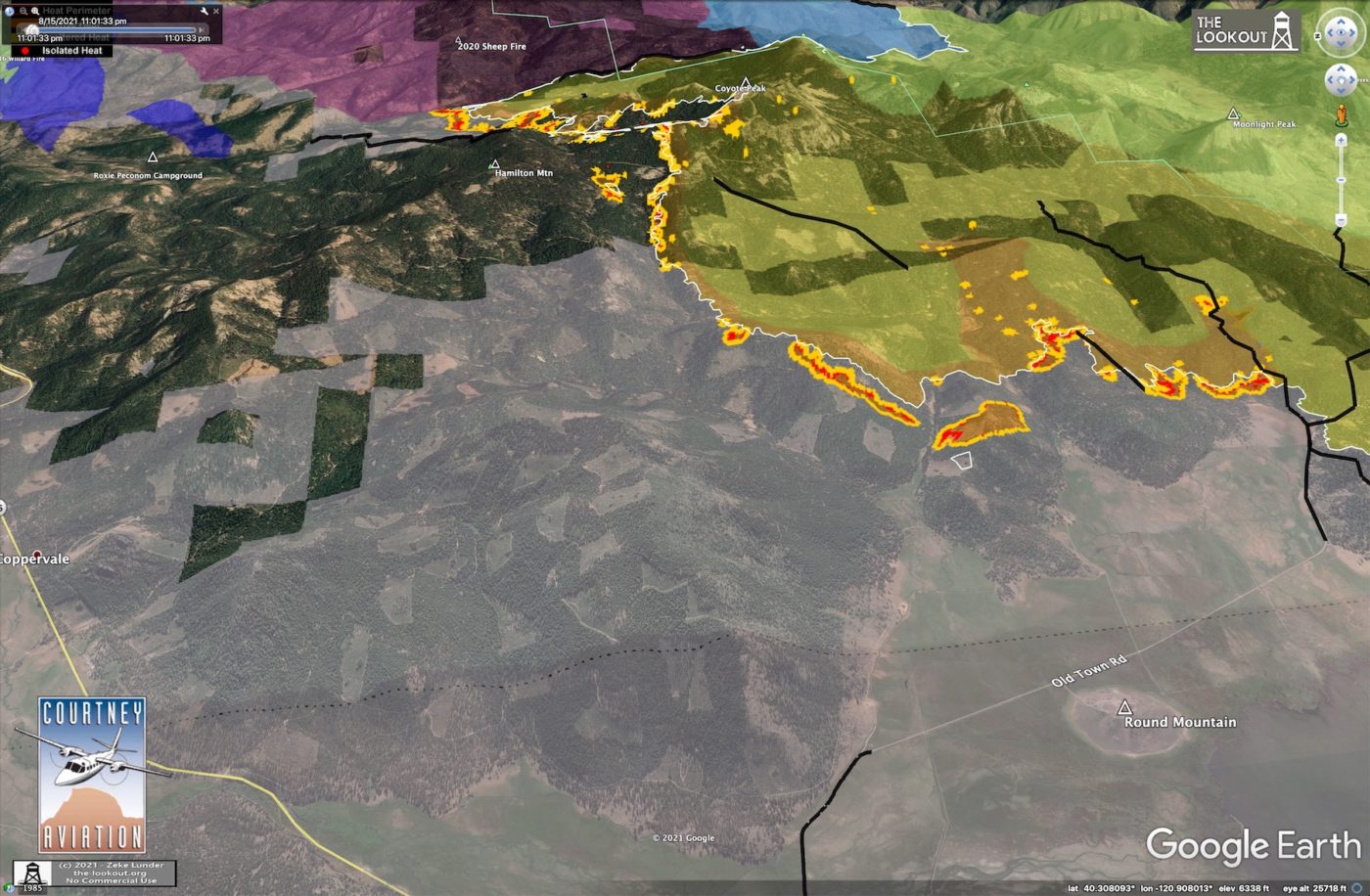 The north end of the fire continues to spread slowly in the Lassen Park high-country. It is running in to some areas burned by managed wildfires over past 20 years. Lassen Peak is on far-right. The Dixie Fire has not yet run into the 2012 Reading Fire Area. Looking south, here, much of the unburned area on the upper-right may now be in play as the fires on Morgan Summit may push uphill this way. 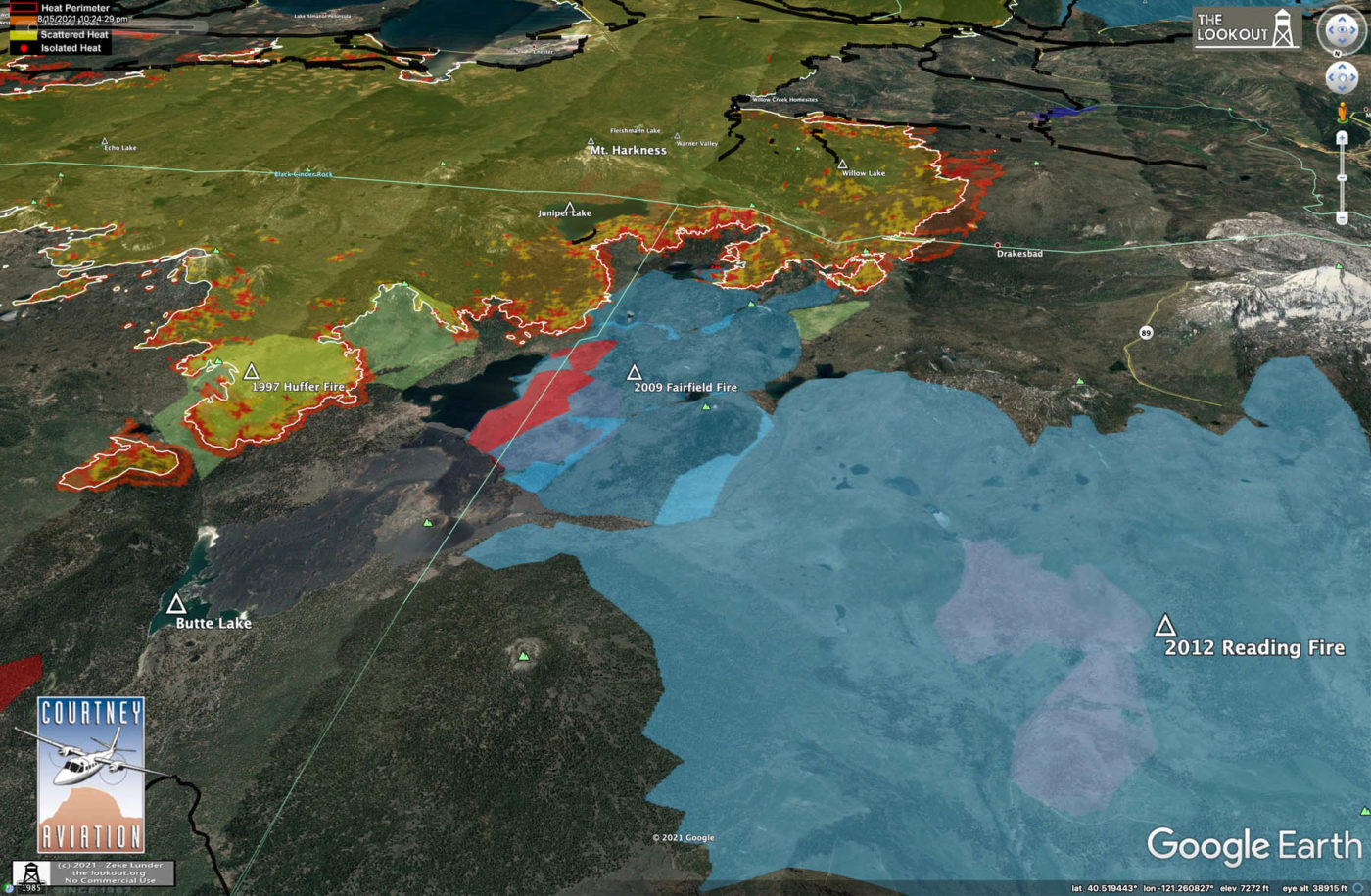 In non Dixie Fire news, the McFarland Fire, west of Red Bluff on Highway 36, ran 15,000 acres yesterday evening/night. Just a reminder there are other major fires going on which are competing with Dixie for resources. This fire is also going to blow up next two days, eventually threatening outlying areas of Tehama County. Red outlines are 2020 fires. 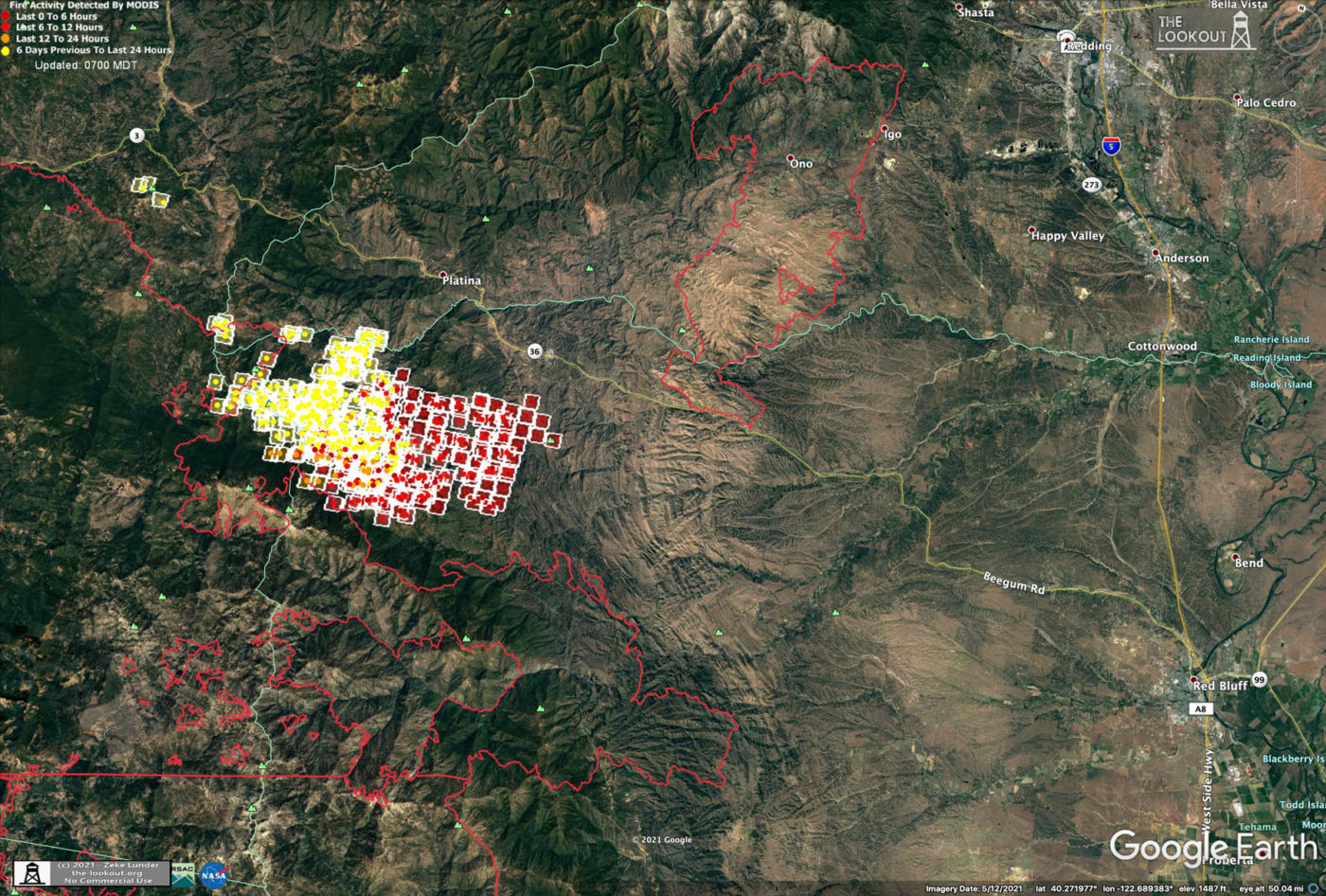 If I update this post today, new material will be at the top of the page.