Portions of the fire got rain last night. This, along with higher relative humidities and good cloud cover is helping moderate fire behavior, allowing crews to go direct in many places, including in the 2014 burn scar north of the Klamath River.  The biggest priority today is the east side of the fire, nearest Yreka. There is a plan to go direct here, which will likely take 3-4 days.
Because the fire has exhausted most of its potential to run uphill, they are less worried about spotting unless we get thunderstorms and strong outflow winds. On the south side of the fire, they hope to take advantage of the road systems and keep the fire from advancing much toward Fort Jones.

Infrared mapping from 9:30pm, July 31, 2022.
Light blue outlines show areas where clouds made IR mapping difficult or incomplete. Dark blue areas are recent large fires.
Red areas are hottest, yellow areas are cooling down.
White line is 24 -hour growth. North arrow in upper-right.
Overview Map
The interior of the fire is cooling down. Unclear how much heat is obscured by clouds in the light blue outlines. 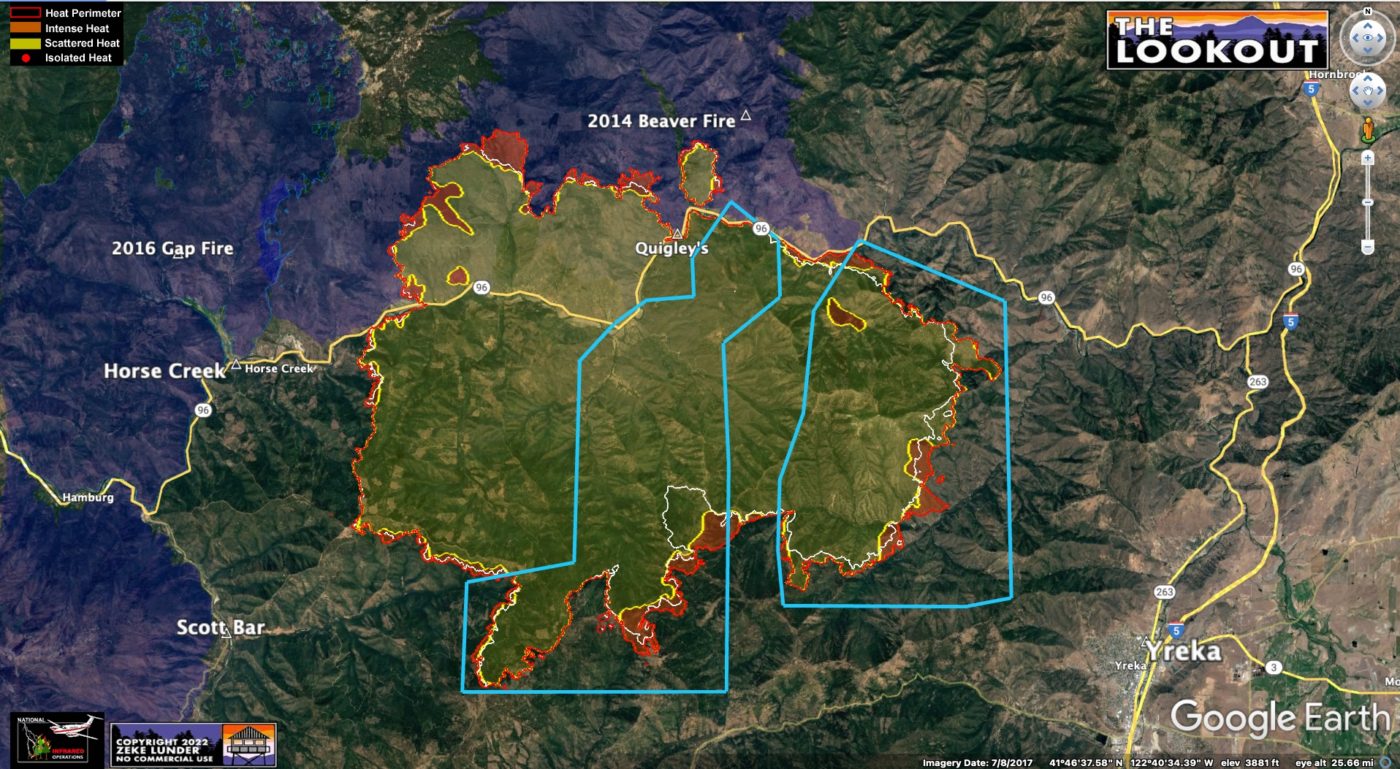 Tactics on Southern Flank
Map below is the view north over Indian Creek Baldy and the southern edge of the fire. Fire backed actively to the south and east over past 24 hours. Rollout of burning materials may cause control problems on this flank of the fire if crews engage directly on the fire’s edge. This fire is in CAL FIRE’s Direct Protection Area, and has a Division Supervisor and a bunch of hand crews assigned.
Today’s operations map shows proposed dozer line tying into McAdams Creek Road. Black lines are current or planned dozer lines. I’m unclear if the plan is to let fire back downhill in Deadwood and Indian Creeks and pick it up at the roads and dozer lines, or try to tie together segments of road closer to the fire’s edge with handline. The IAP work assignments for this division are to construct direct fireline where possible. As we talked about yesterday on our YouTube channel, backing fire may achieve some good resource benefits for the forests in these watersheds — especially if the fire stays smoke-shaded. 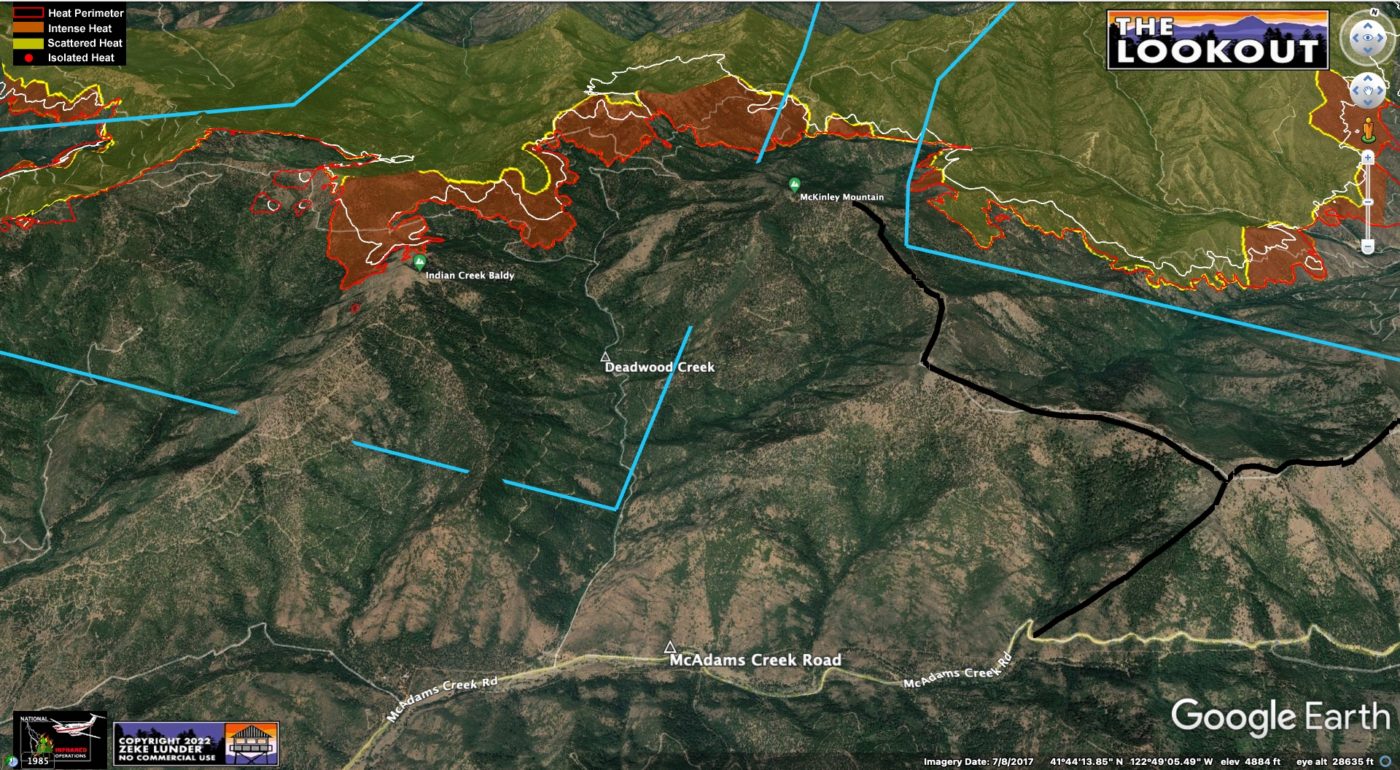 Looking east over the Scott River Road, up Mill Creek. Black lines are planned dozer lines. Fire has not spread very far downhill here in the past 24 hours. 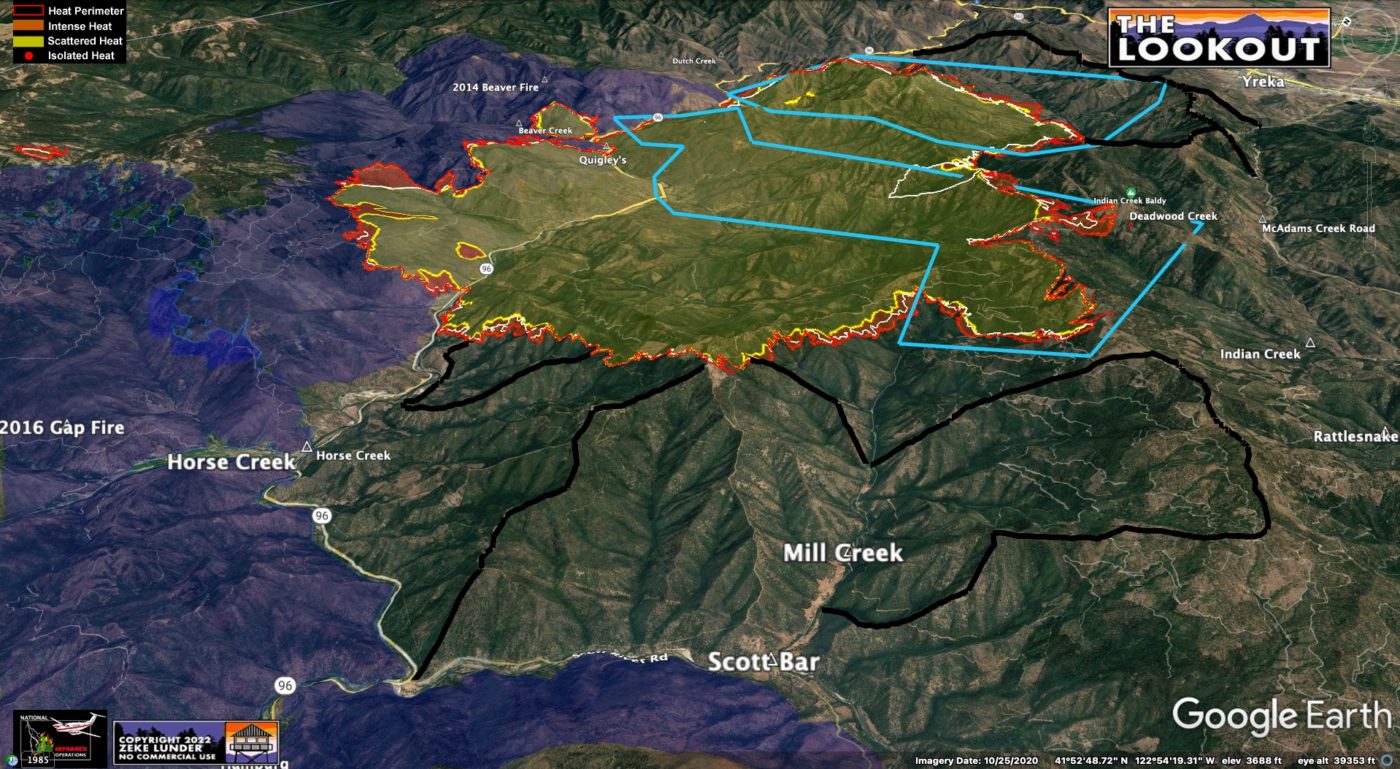 Looking east over Horse Creek. Black lines are planned dozer lines. Fire has not spread very far downhill here in the past 24 hours. According to fire behavior briefing, crews are going ‘as direct as possible’ on this part of the fire. 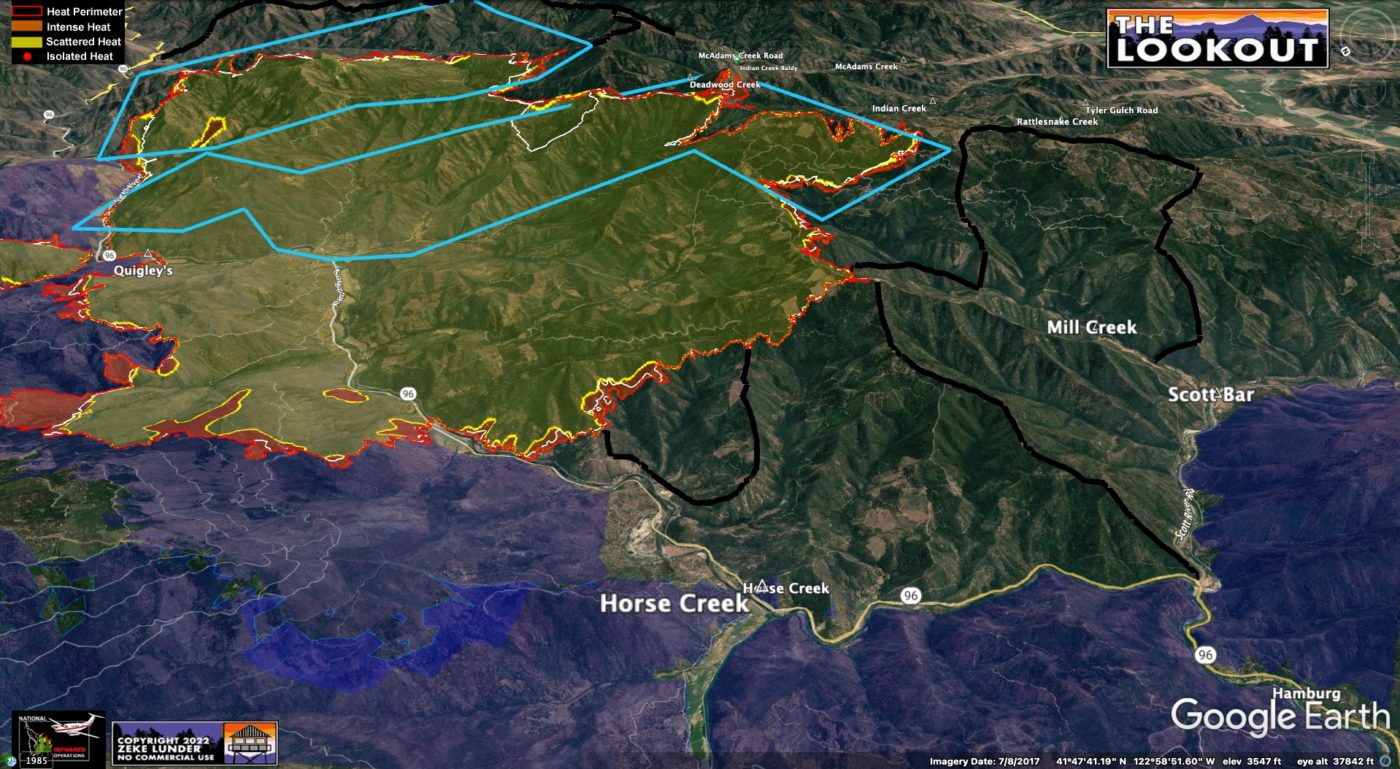 Looking north over Highway 96 at the northwest edge of fire. Fire has not spread much within the 2014 Beaver Fire for past two days. As mentioned in our YouTube briefing, there has been salvage logging and brush control in many privately-owned areas of the Beaver Fire, so fire is mainly being carried by grass in the clearcuts. Black lines are planned dozer lines. 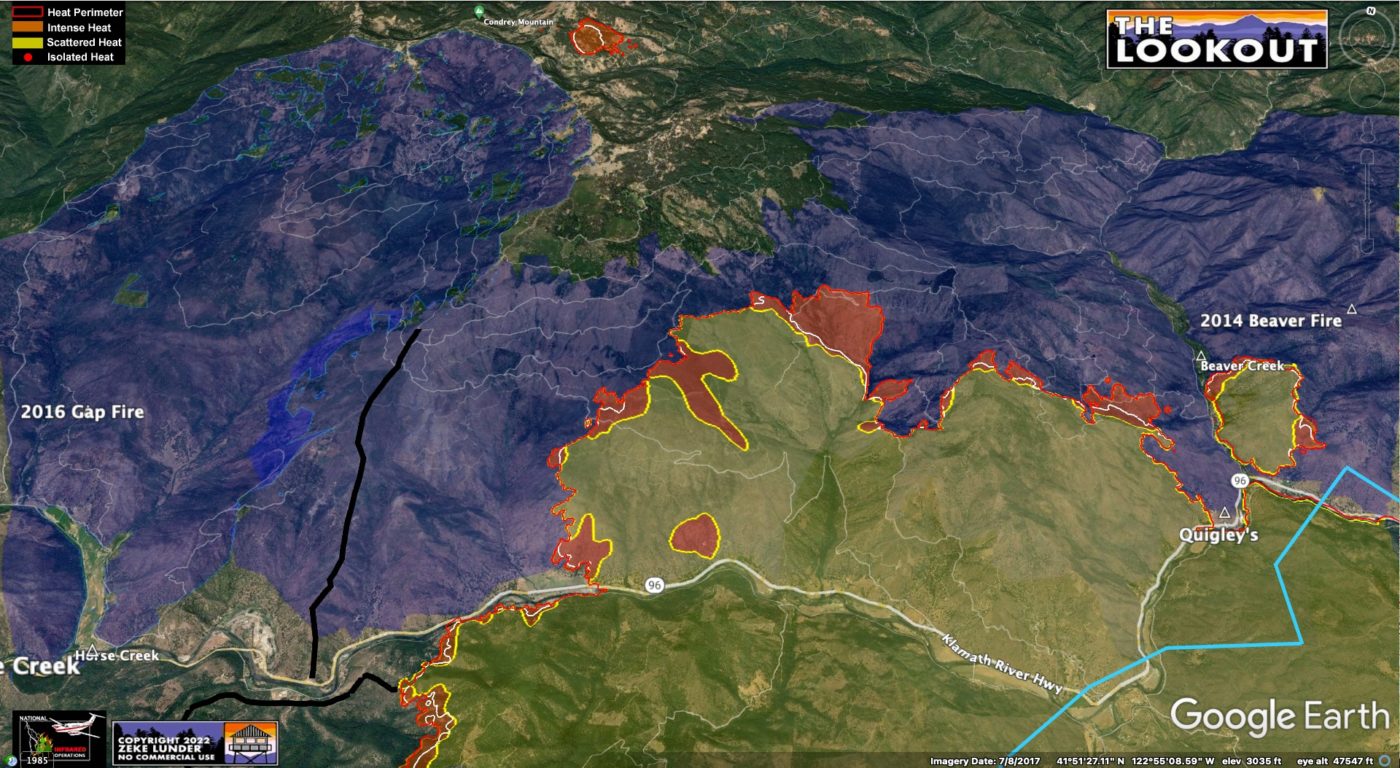 Looking southwest over Highway 96 toward Yreka and up Humbug Creek. This is the area mentioned as being top-priority. Black lines are planned and existing dozer lines. Light blue is areas IR mapping may be inaccurate due to clouds. This portion of the fire is pretty desert-like. Fuels are sparse, and grass is one of the primary carriers of fire. The rain we have received has helped knock the fire down here, but things can dry out quickly. It will be interesting to see more detailed mapping of this area — we’ll likely have another flight by noon. 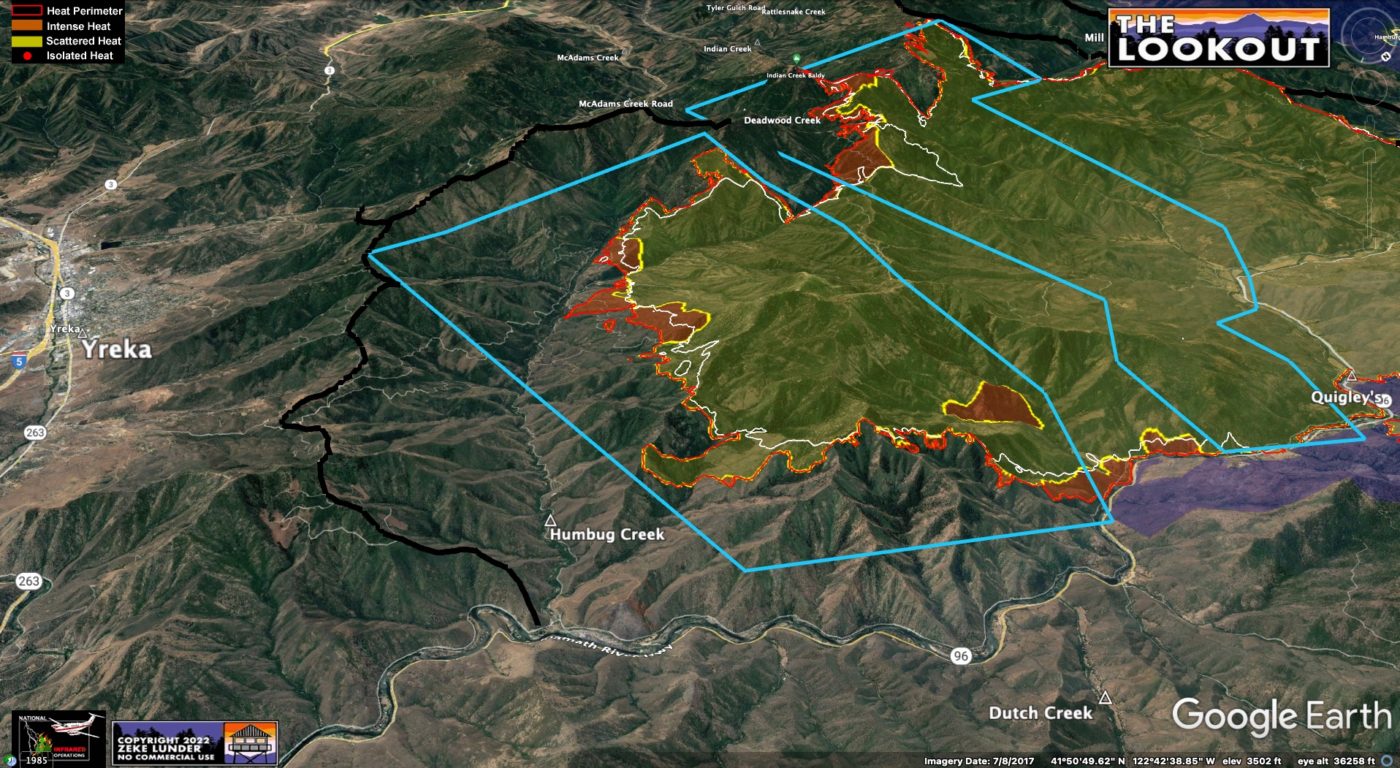 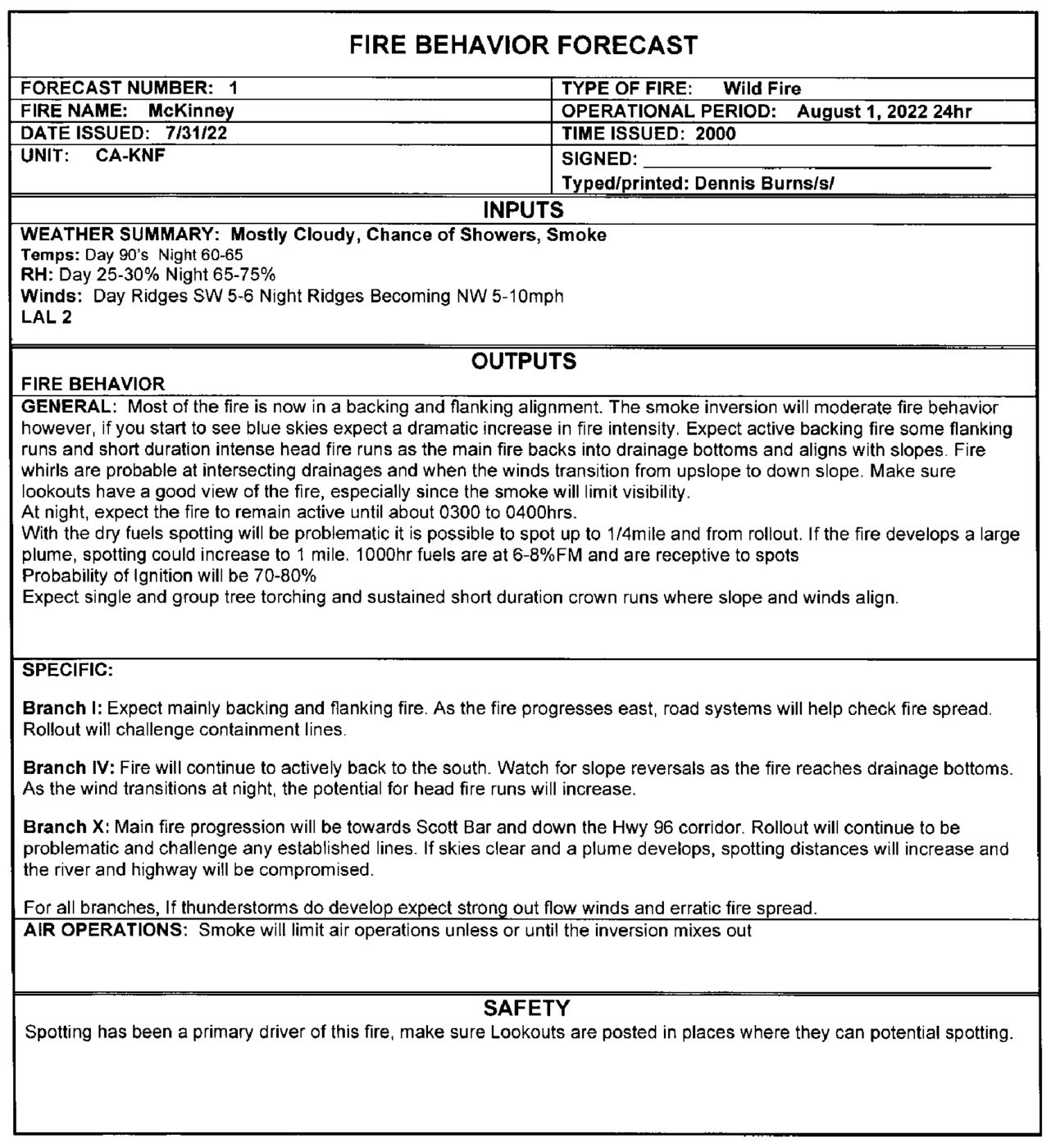