People have been sending me stuff. Here is what it looked like on the Dixie Fire when a spot fire took off in heavy fuels with a good wind. Also it captures the mood for the last day of this crew’s roll on the fire.

The same areas we’ve been talking about for past week were again active this afternoon. The images below show fire spread on afternoon of September 5.

The southeast side of the fire added about 8,000 acres, filling in some of the unburned area between the Dixie and Beckwourth Complex. The fire did not push much to the south. The light blue shape in center of this image is 2021 Dotta Fire. The biggest problem with the current fire spread in this area the approximately eight miles of unsecured perimeter on the south end, about half of which is in areas that will take a long time to control, even with forecasted favorable southwest winds. There are no north or east winds in the forecast for at least five days, but as long as we have uncontained fire on this southern flank, there is a potentially dangerous setup for spread back to the southwest when they arrive.

At the scale of our current fire and with a large amount of active fire to the northeast, the relatively small footprint of the Dotta Fire doesn’t buy much advantage. 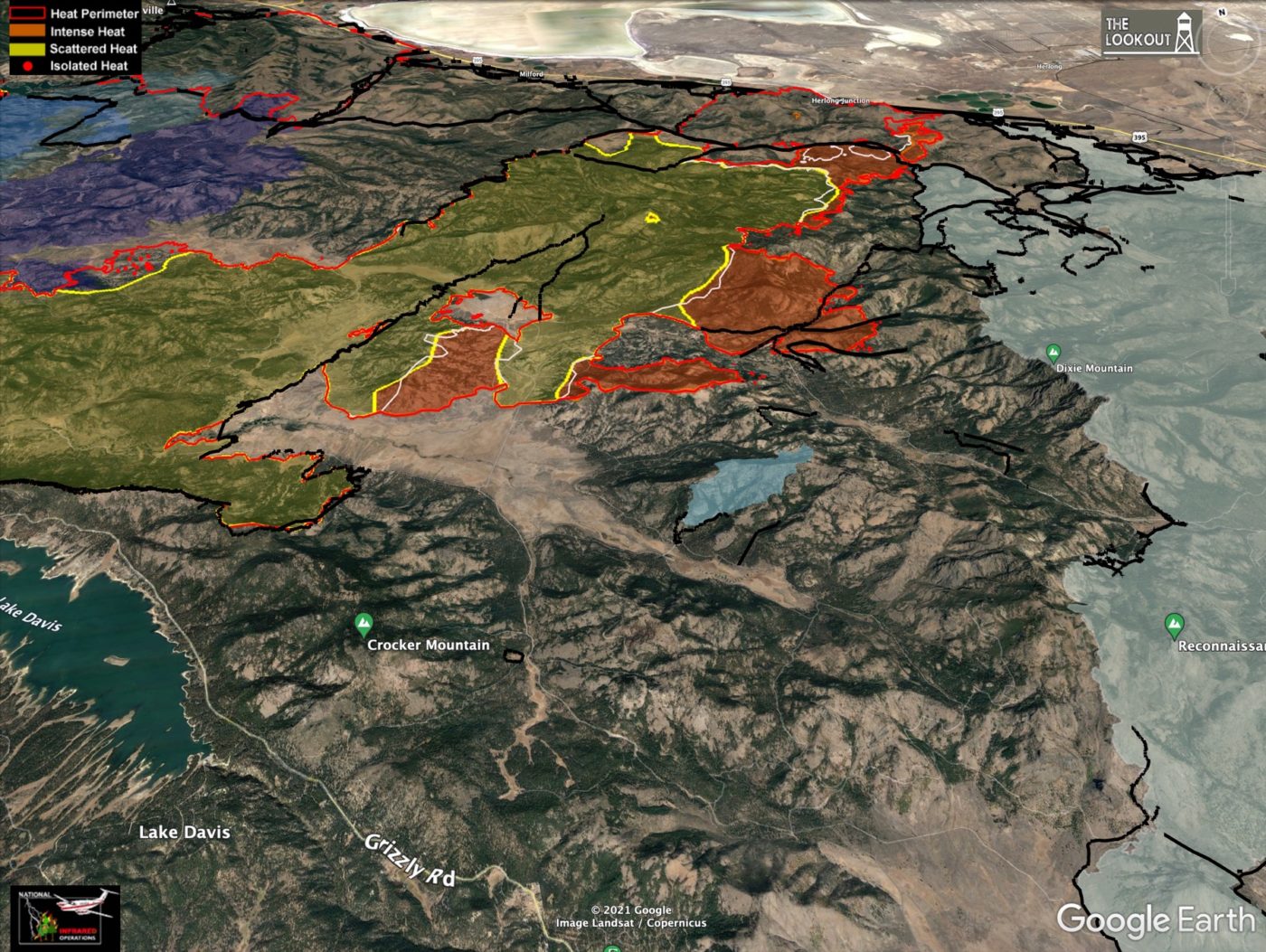 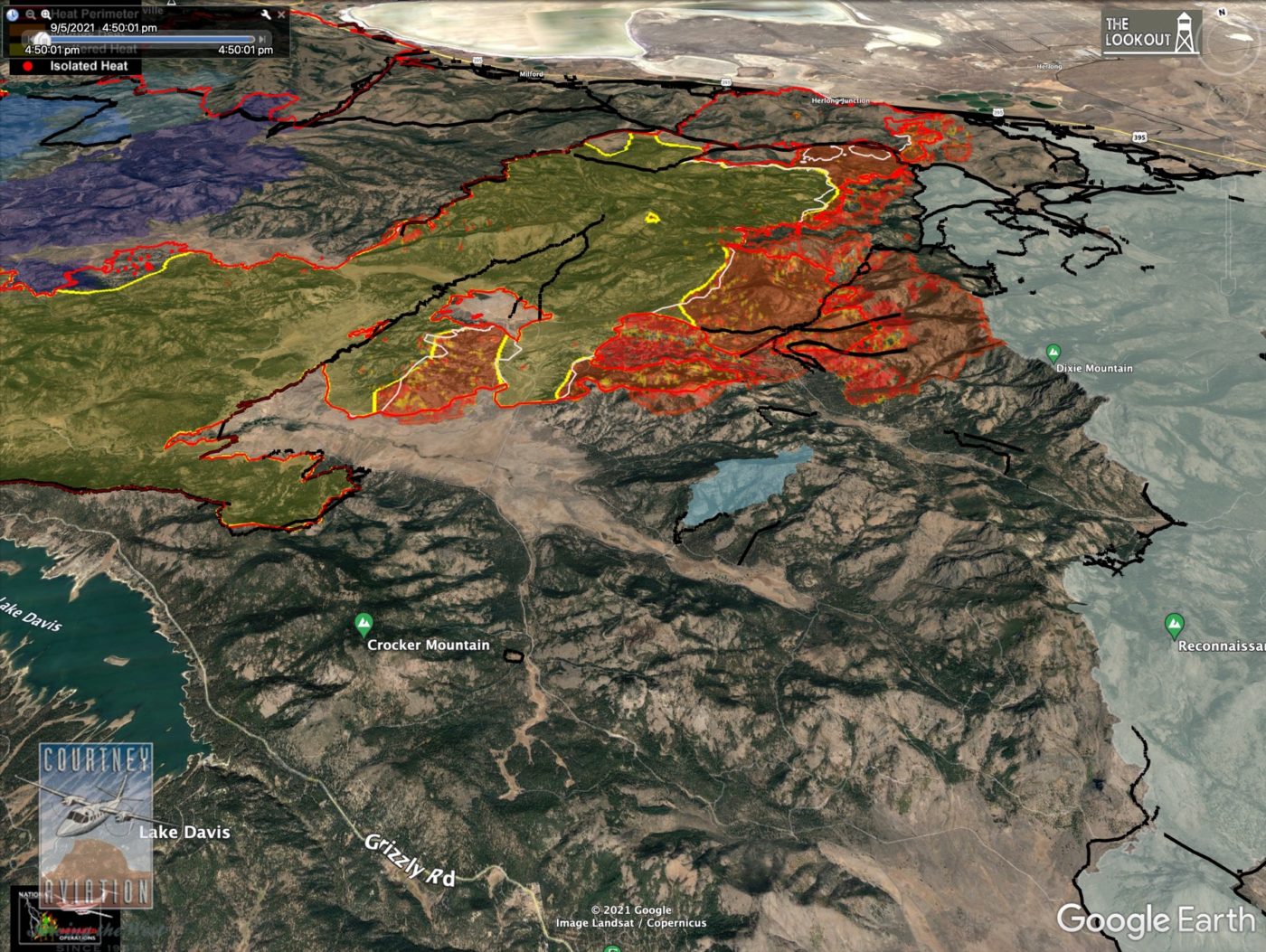 Fire in Dixie Valley on the western edge of this area appears to have held to the north of what white man’s maps still call ‘Squaw Valley Road.’ Crews pushed a bunch of new dozer line today, and while it’s too soon to criticize them for that, I’ll be sure to let you know if the fire blows over them. 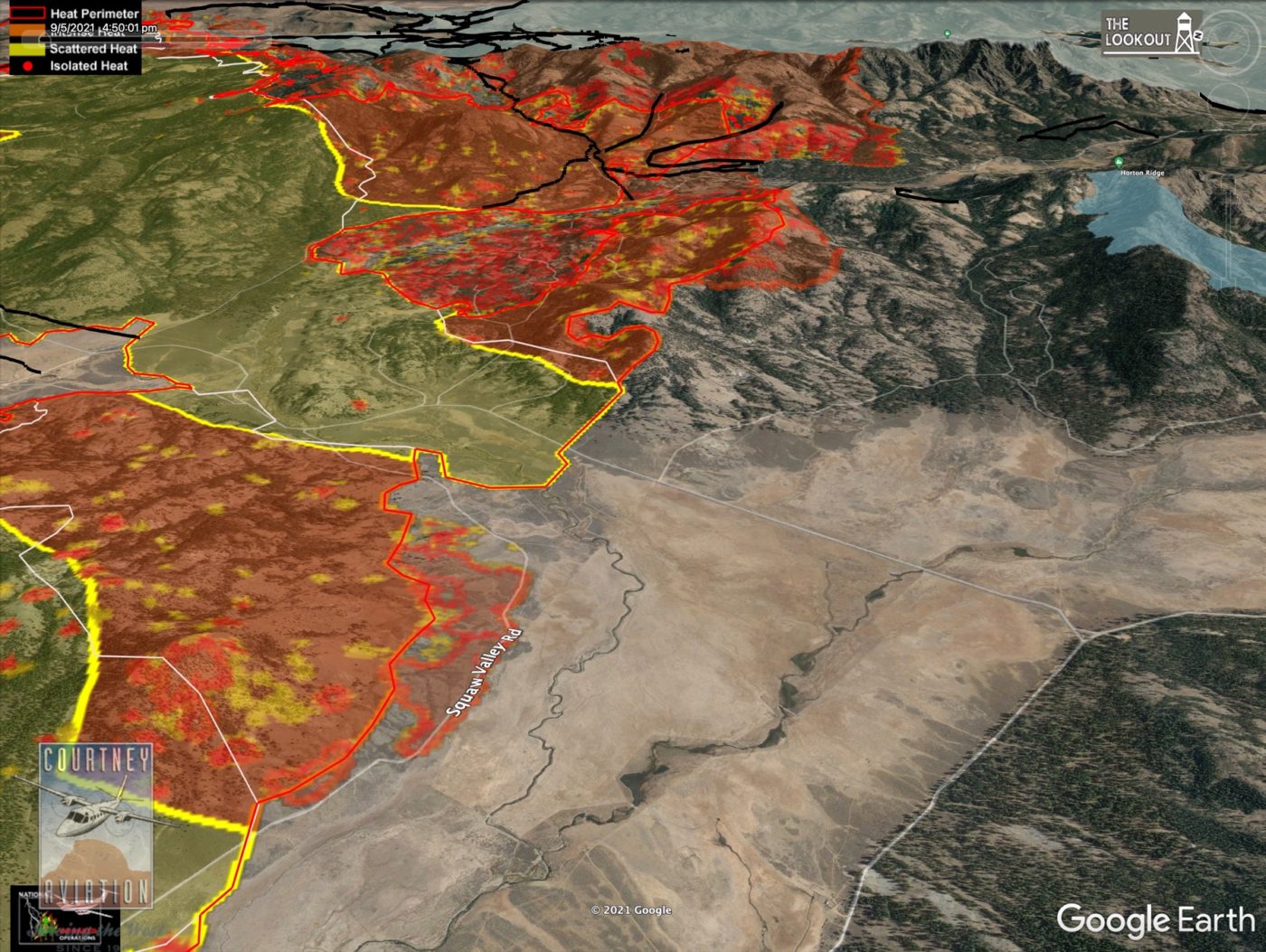 6:30pm on September 5. A couple fingers of new fire are showing on the heat imagery where the fire is dropping slowly off the Escarpment. 2021 Beckworth Fire is the pale area on the left. 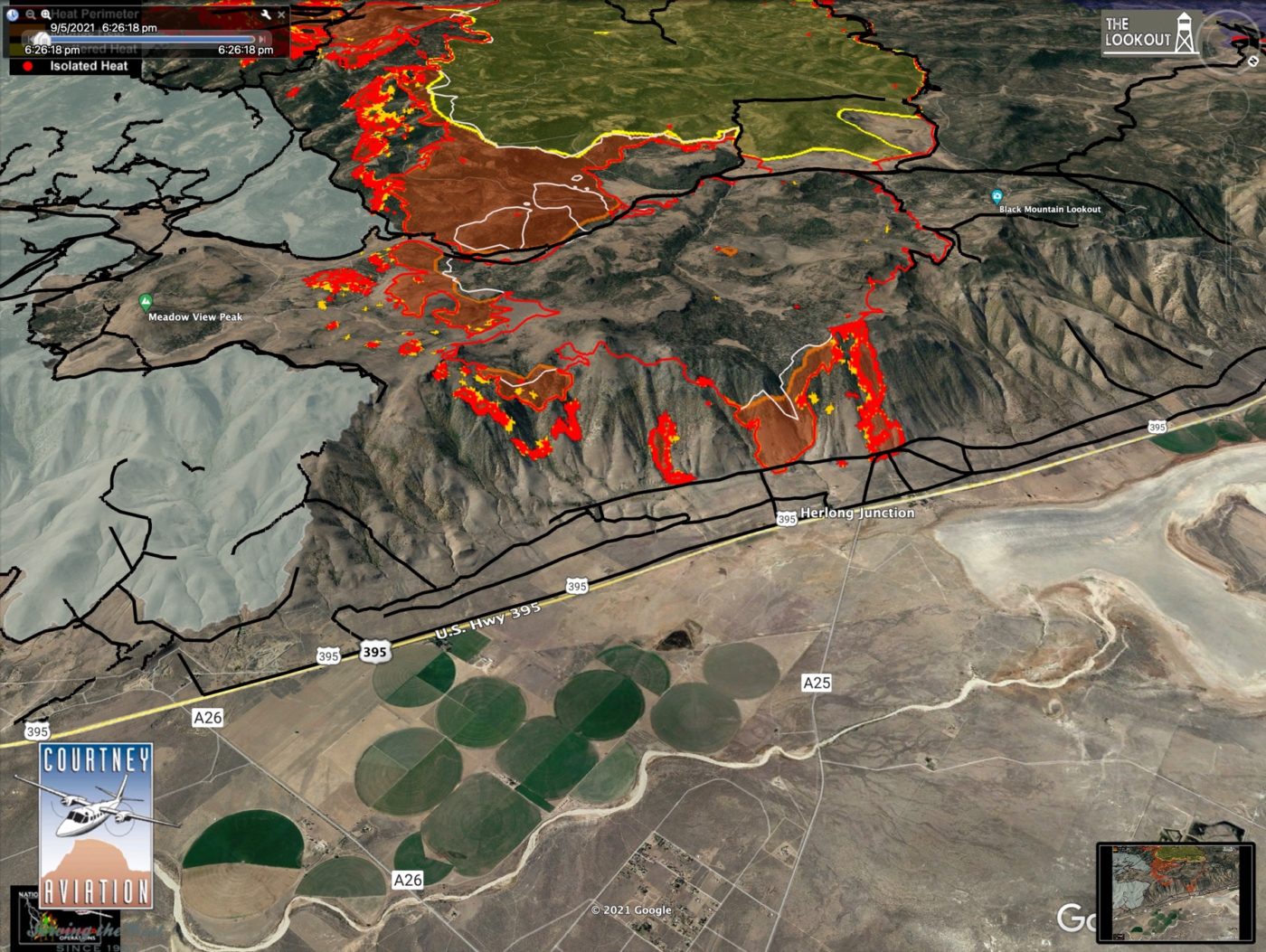 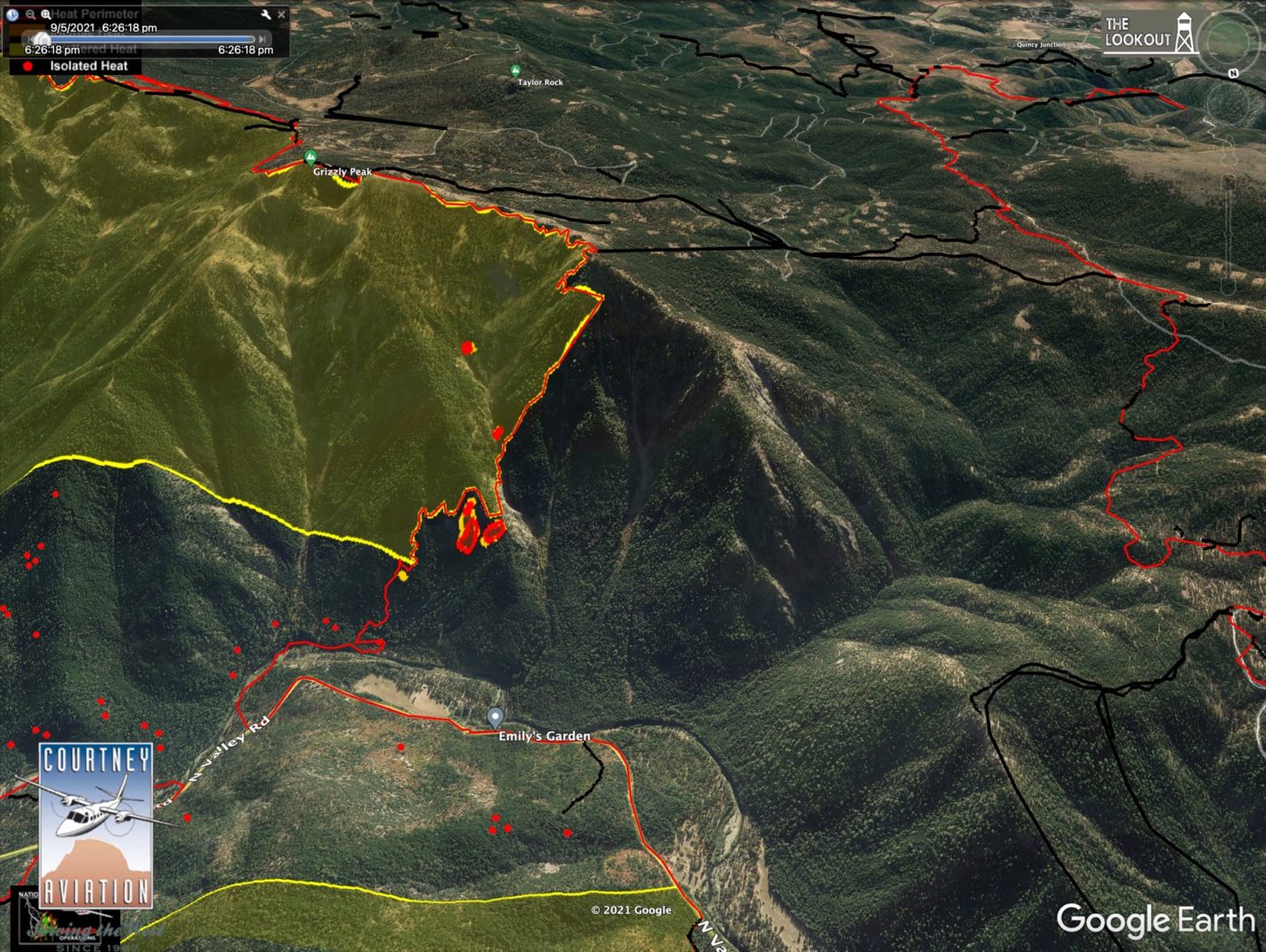 A 30 acre spot fire was taking off this afternoon (9/5/2021) near Bogard. The light colored polygons around the spot fire are mastication projects (mowing of small trees and brush) in tree plantations.

Mastication is on our list of wildfire hazard reduction projects, and while it sometimes helps with firefighting, it isn’t really a fuel-reduction technique. All of the fuel remains onsite, so it’s more of a fuel rearrangement technique. Mastication leaves a big pile of kindling in the forest until the material rots, which can burn like the sun under the right conditions. Often masticated units leave too much surface fuel in them for prescribed burns. Not the best tool in many circumstances, but mastication has its place in our quiver of vegetation management tools. 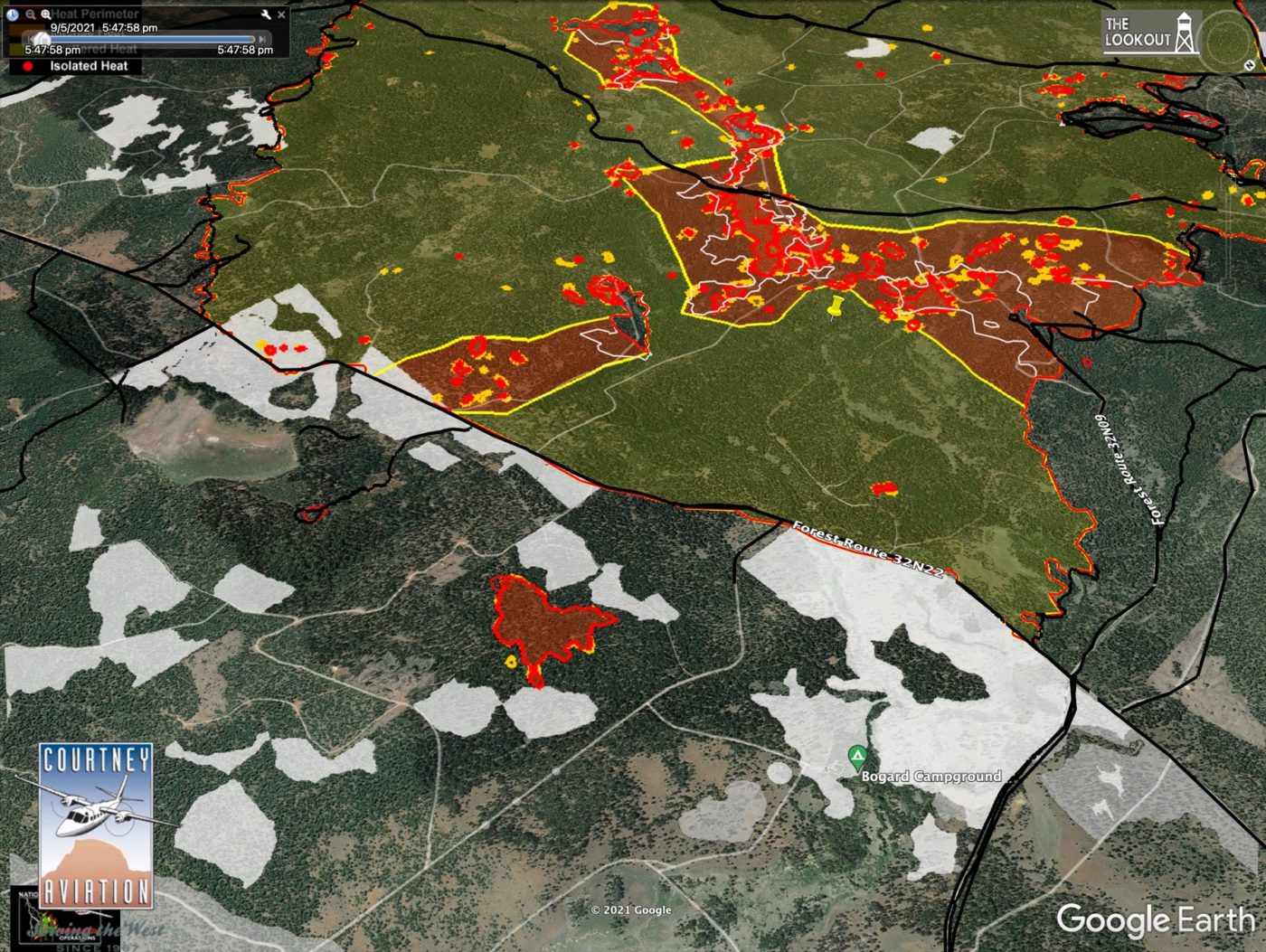 Within the 2012 Reading Fire, the fire ran a mile north down the valley of Hat Creek today. It is still two-three miles from the edges of the Reading Burn. White areas on this maps are various different fuel reduction projects including tractor piling of brush to prepare areas burned in 2012 for planting of trees. Purple line is the Lassen Park boundary. This spread puts some pressure on the team to get the north end of the Reading Fire tied in, which as we mentioned previously, has been difficult due to the greenness of the young buckbrush in the burn. 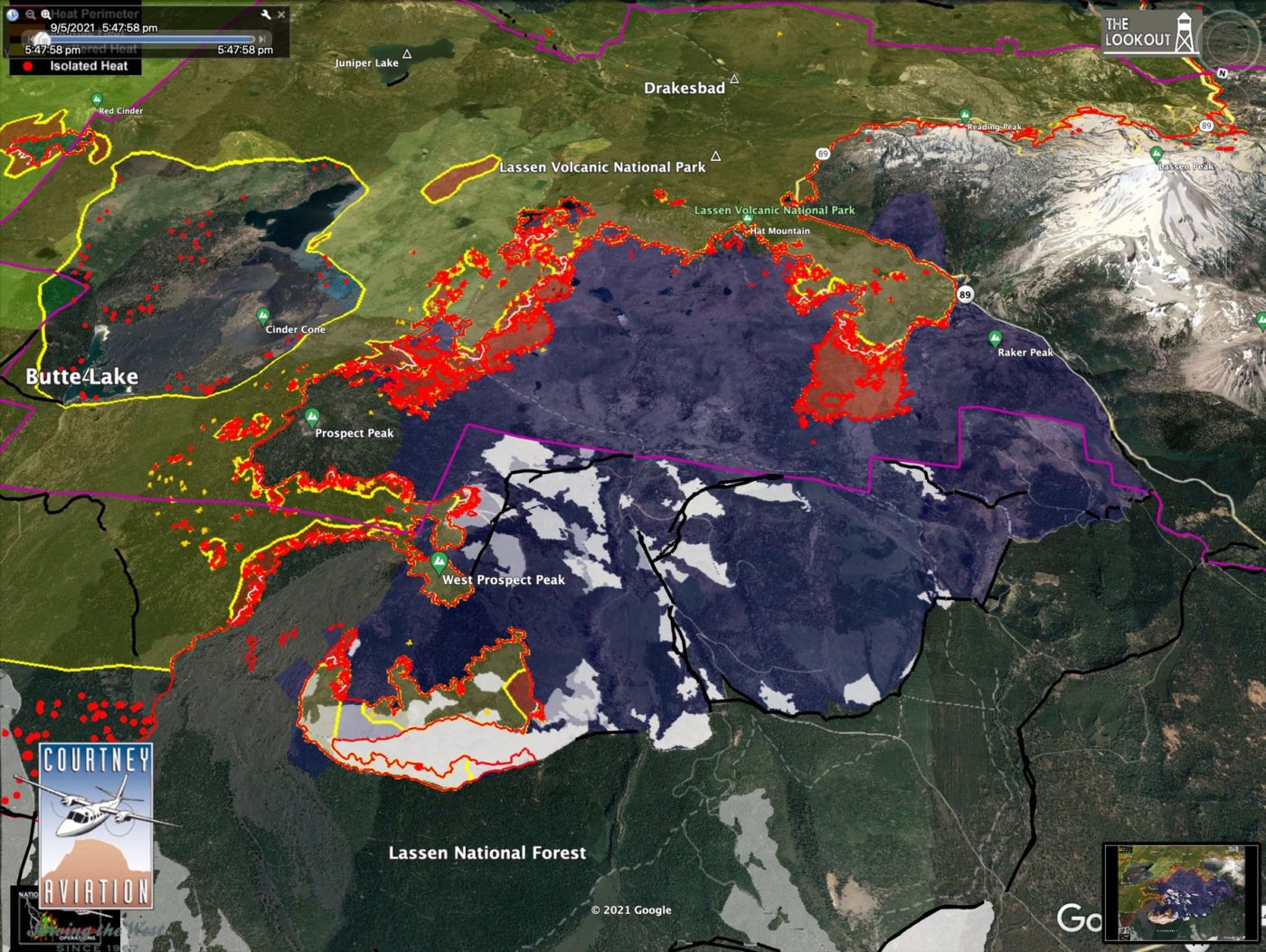